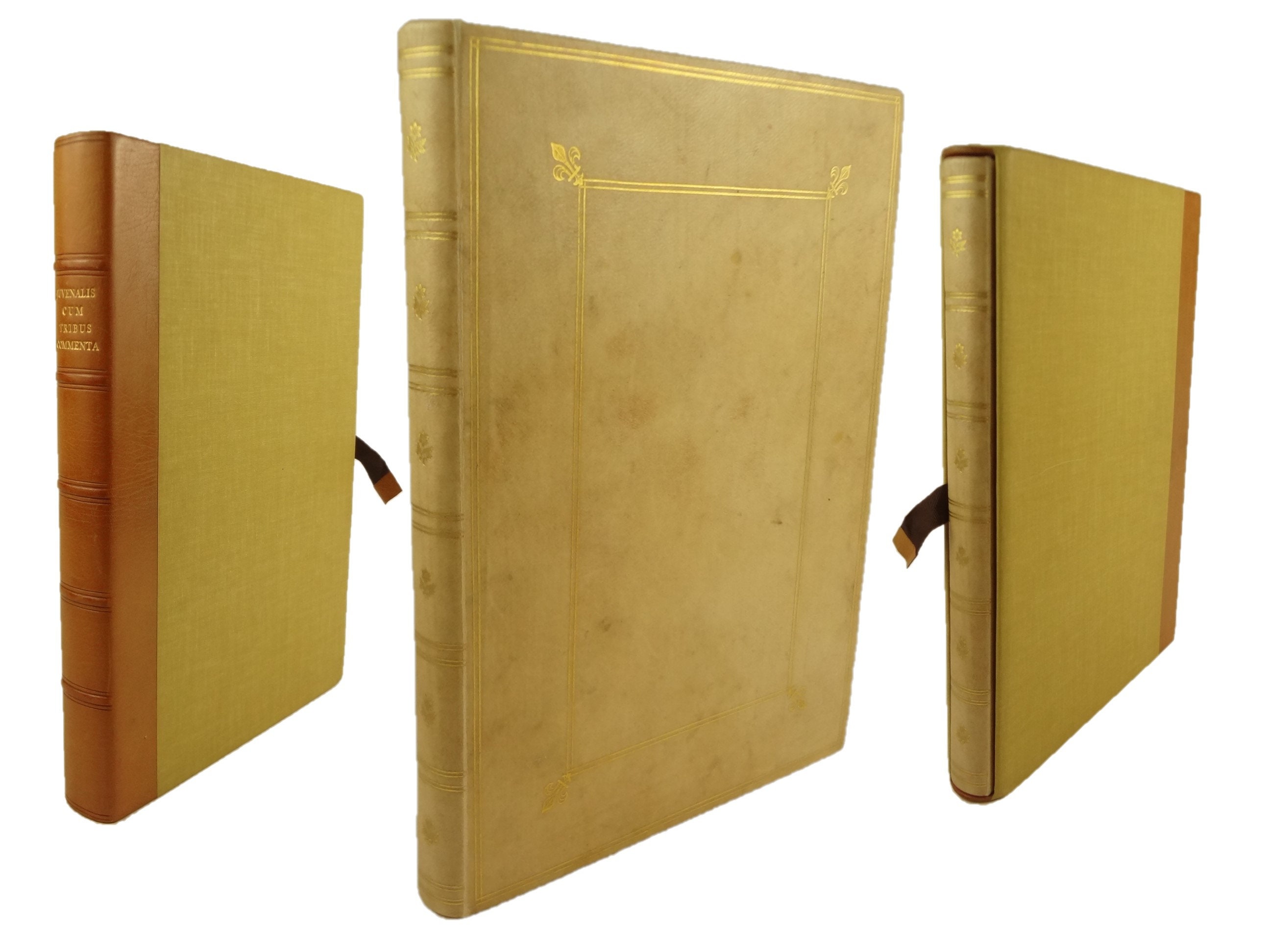 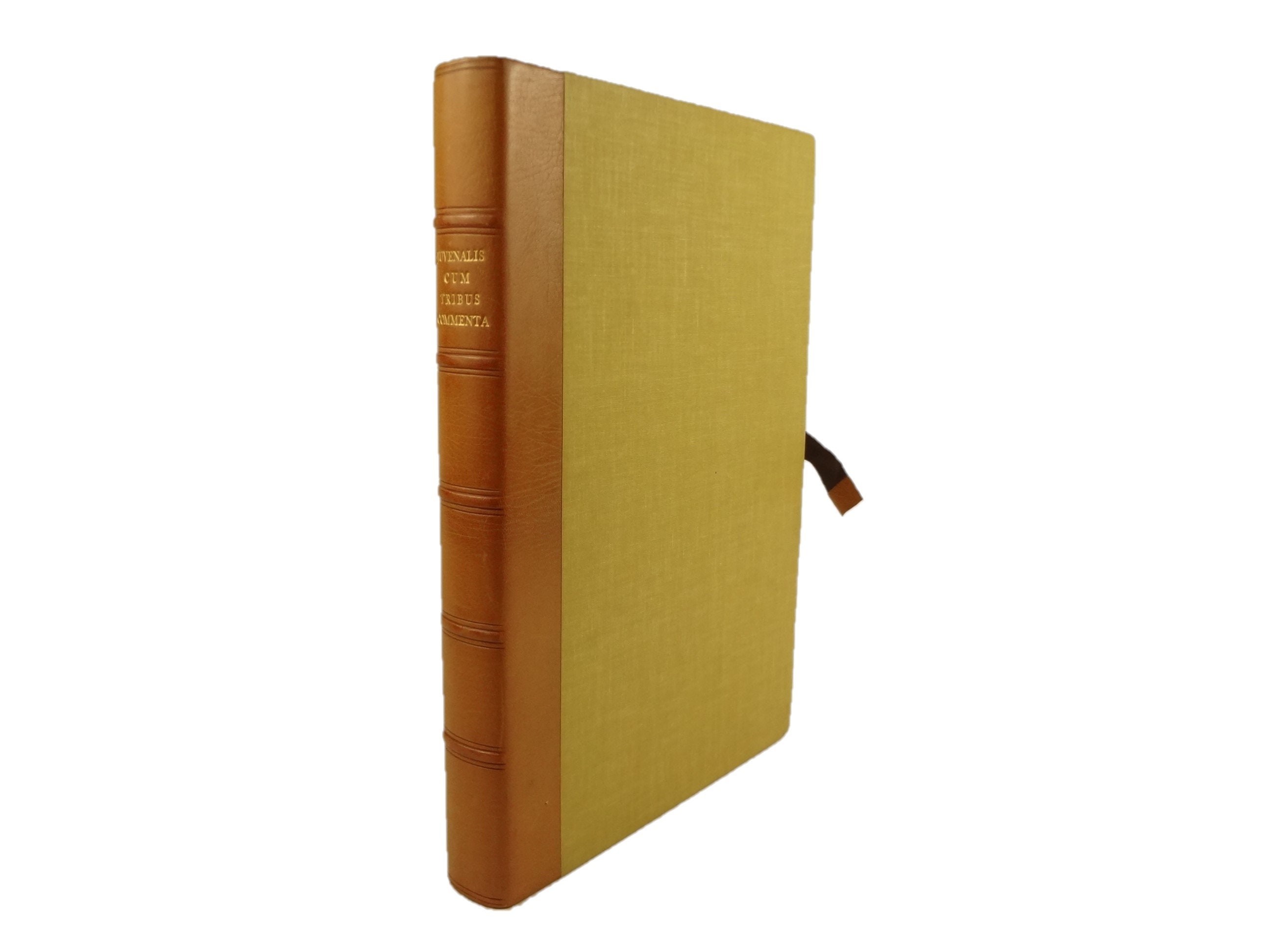 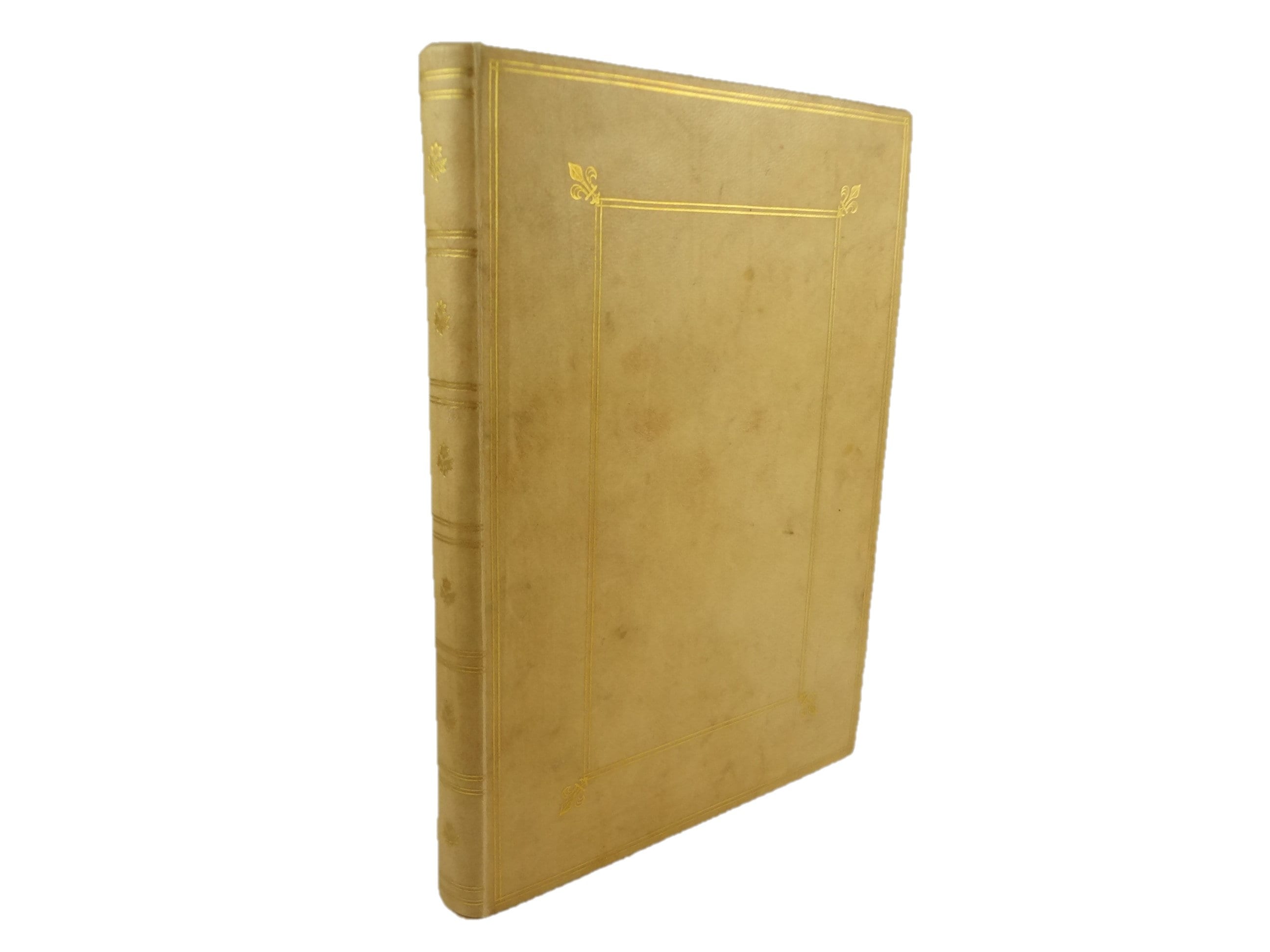 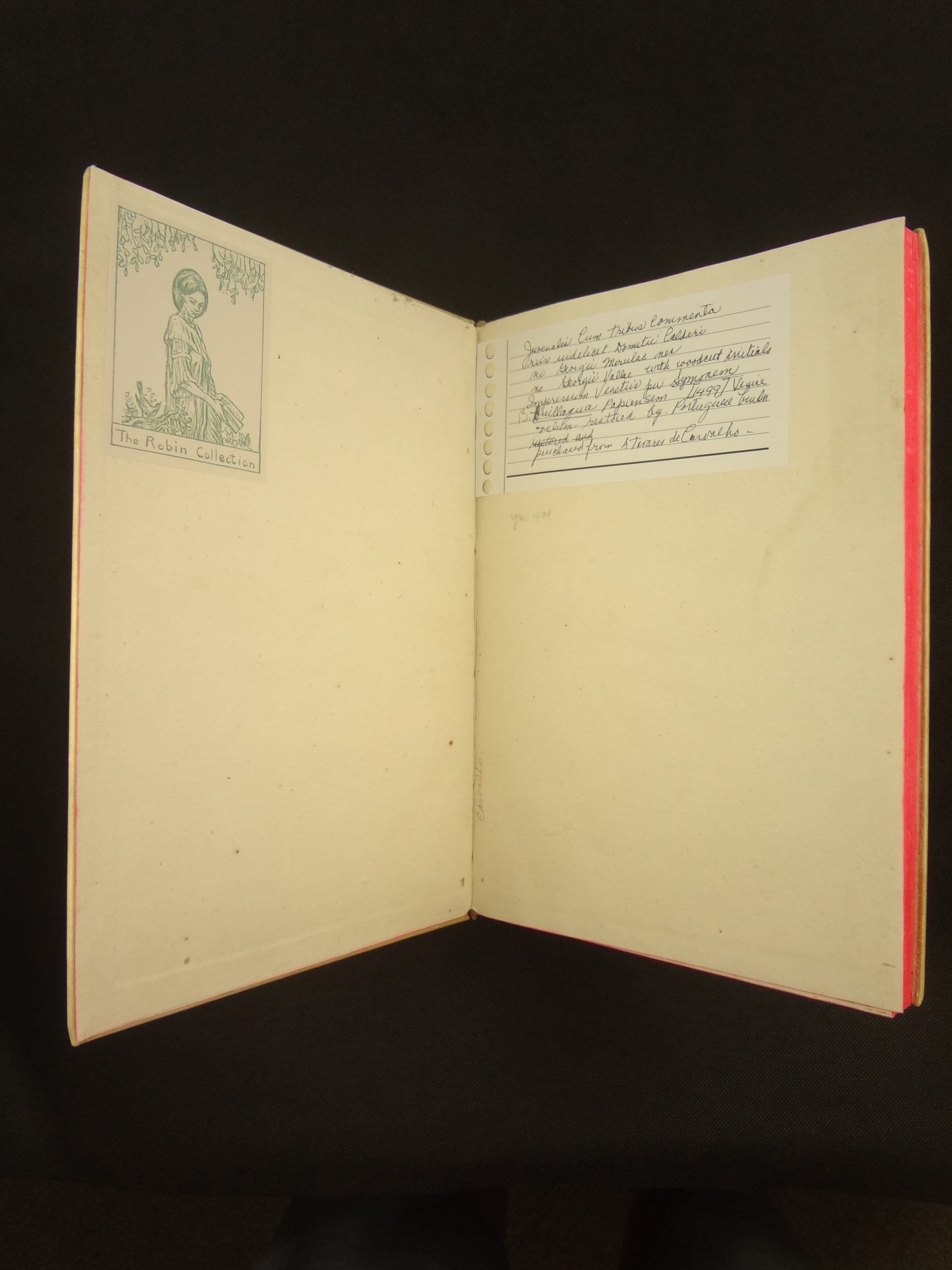 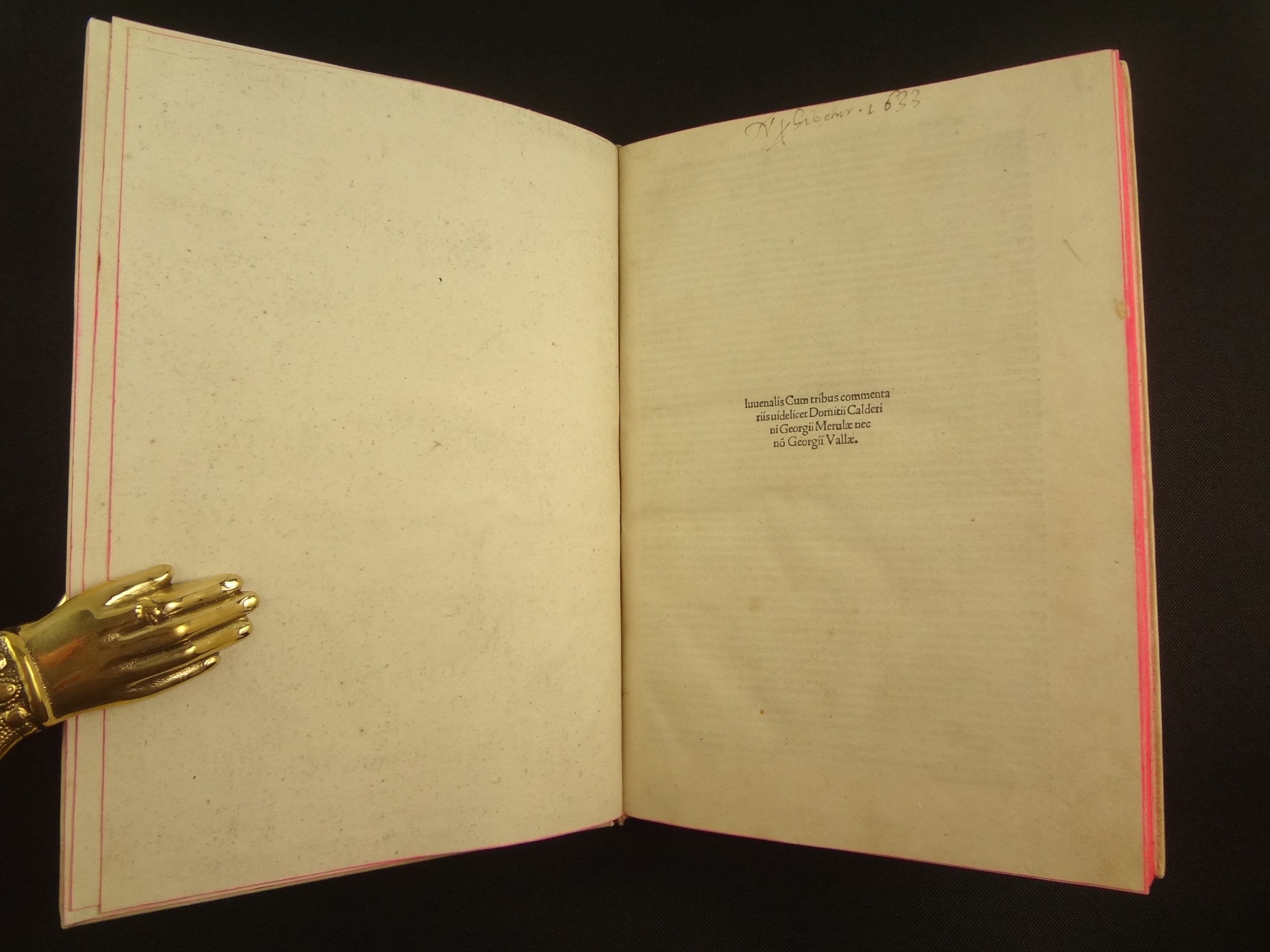 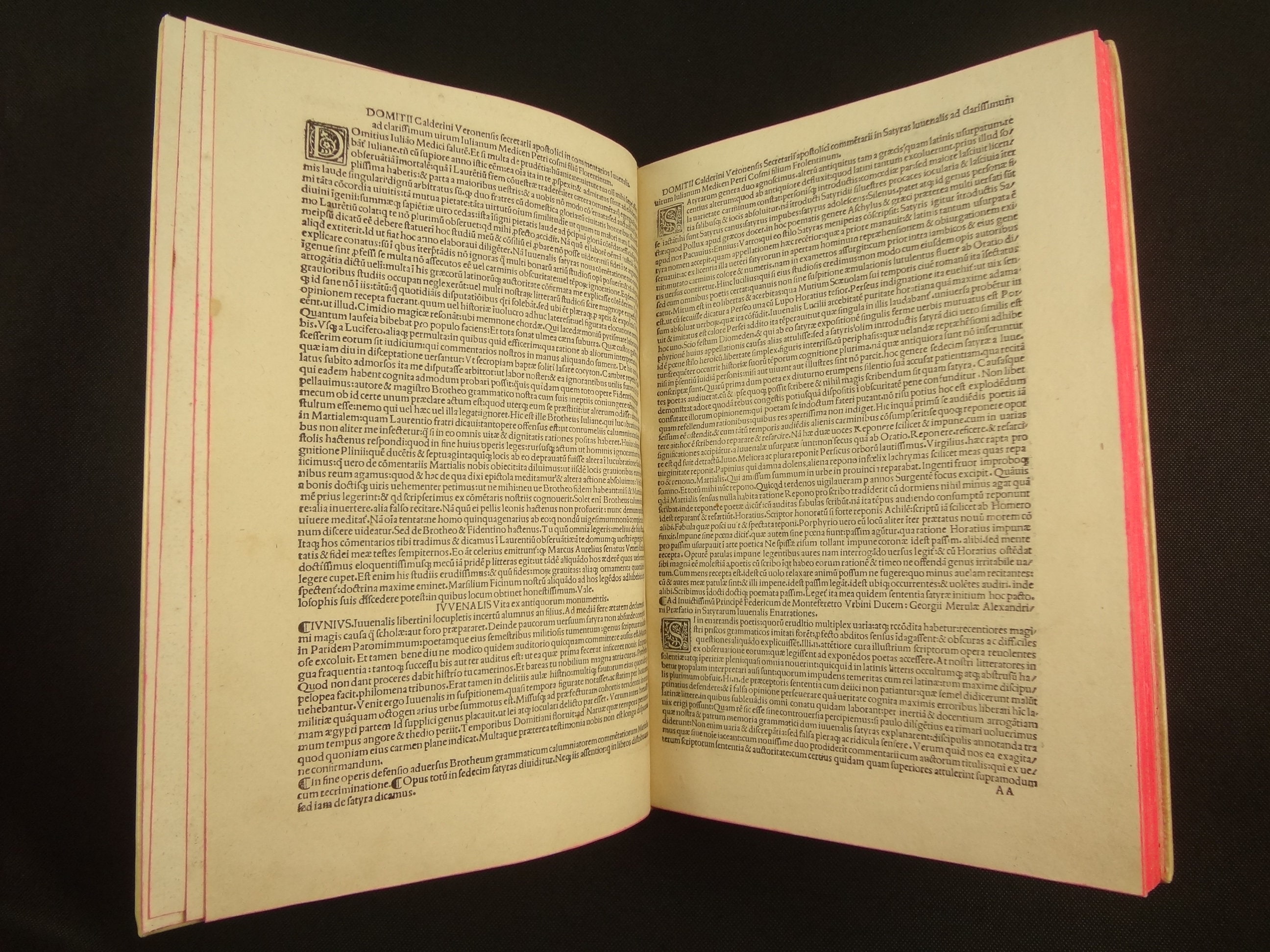 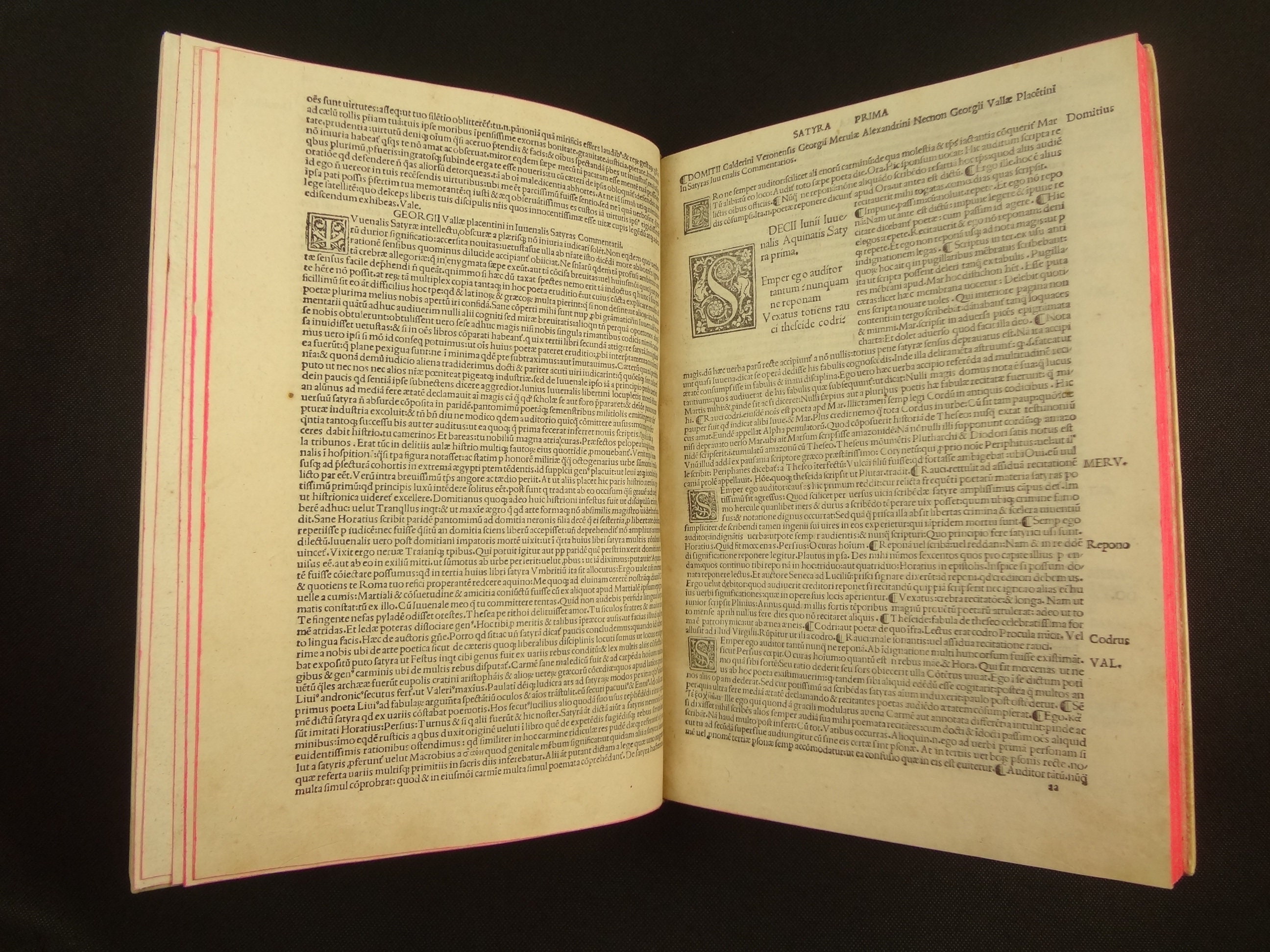 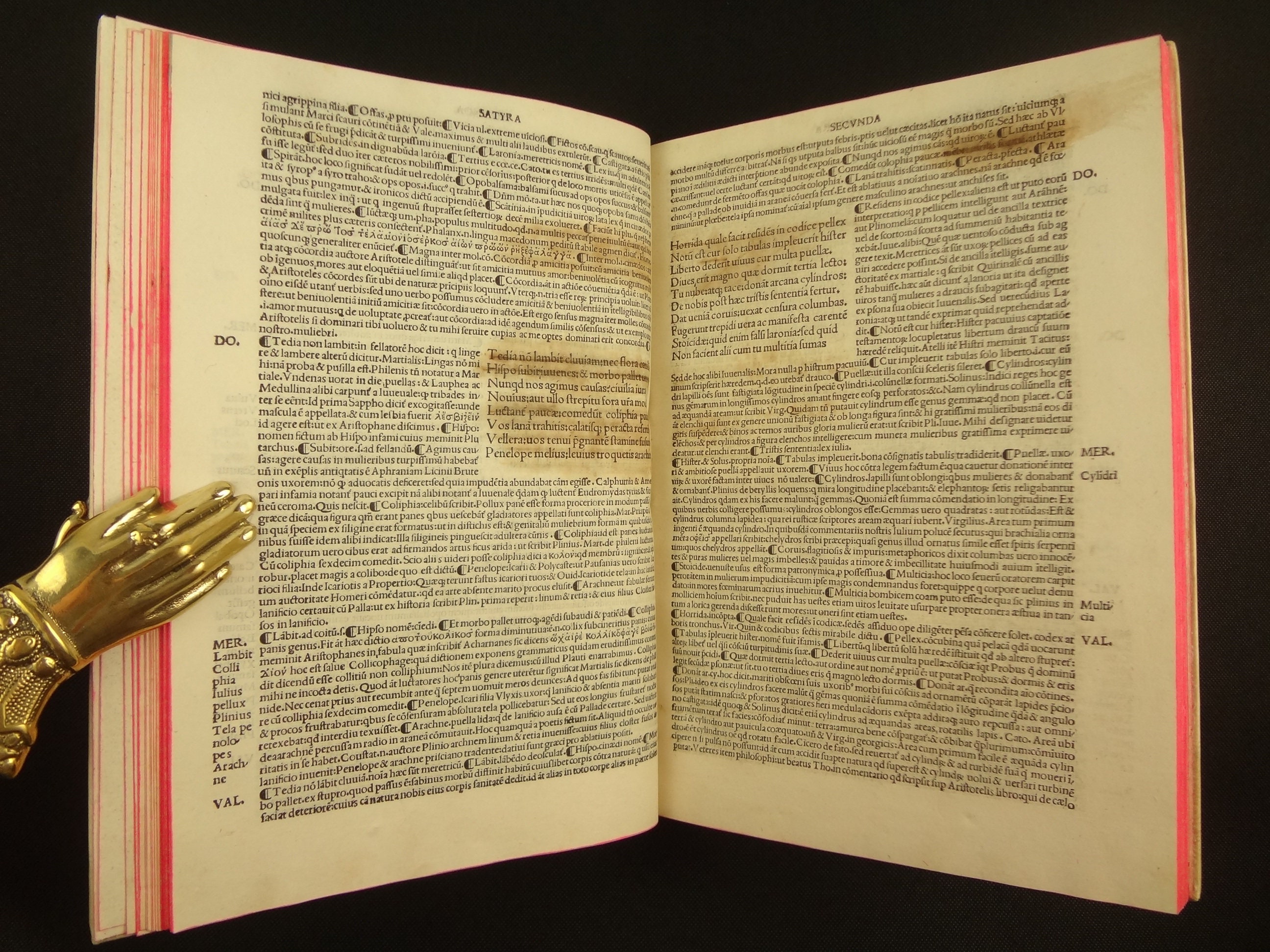 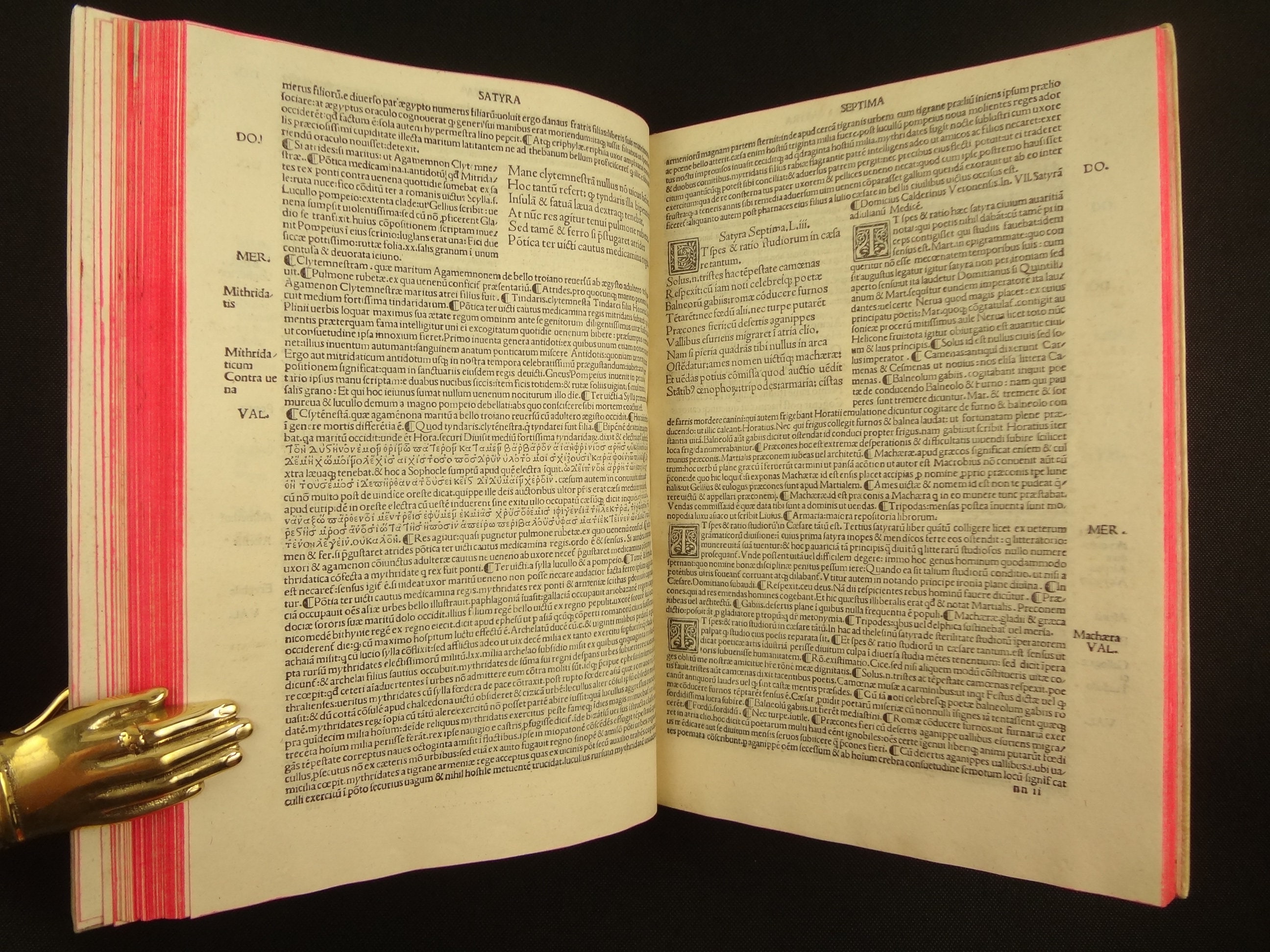 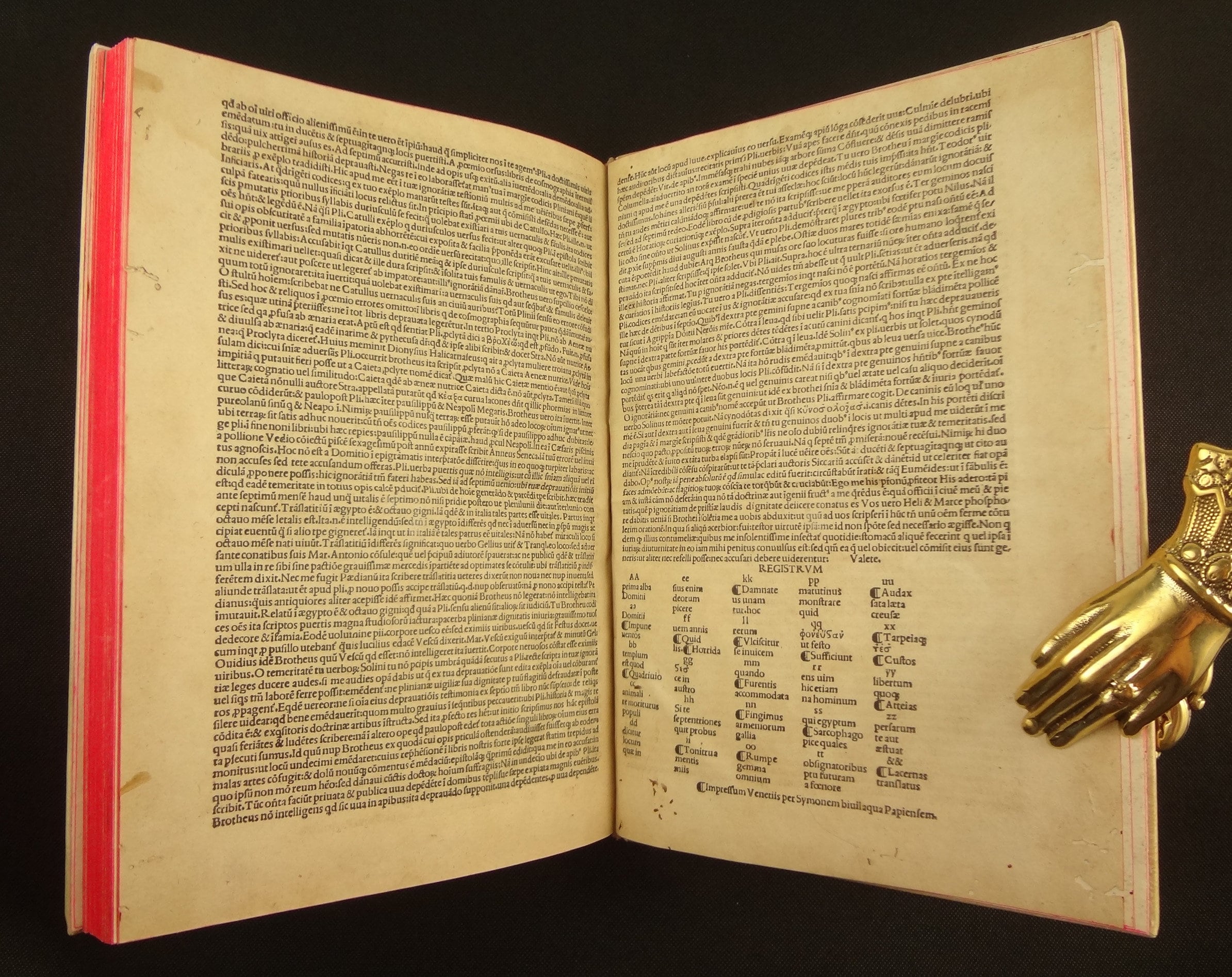 Handsomely bound incunable of Juvenal's Satyra(e), printed circa 1496-1497 (per the Incunable Short Title Catalogue), by Simon Bevilaqua in Venice, and protected in an equally attractive slipcase.

This edition includes the commentary of Georgius Merula, Domitius Calderinus, and Georgius Valla.

Juvenal is credited with sixteen known poems; all are in the Roman genre of satire, which, at its most basic in the time of the author, comprised a wide-ranging discussion of society and social morals in dactylic hexameter.

Simone Gabi, called Bevilaqua, of Pavia, began printing in Vicenza in 1487 He later moved to Venice and printed until I506 After a period as an itinerant printer he established a shop in Lyons, in I5I5.

It is well held in the world's libraries, with many copies listed throughout the world.

See pictures. Slipcase handsome with only a few fingernail rubs to spine and light rubbing to base (where it sits upright). Binding looks fresh. Text block edges are bright.

Endpapers renewed. Ex libris plate on pastedown (The Robin Collection). Receipt of purchase from a "A. Tavares de Carvalho" (Portuguese dealer of Old Books and Prints) mounted to the FEP. Also, pencil bookdealer marks on FEP "Carvalho", "(?) 1499". Carvalho also wrote his name at the gutter between FEP and first unpaginated blank endpaper (which is renewed/new).

Occasional moisture mark at edges throughout. Mostly quite light, significant occurrences noted above.

Strikethroughs and blotting (purging) end by mm gathering. Rear half of book cleaner, free of annotations. Some ink staining in the text through to gathering mm; it seems like purging (Catholic banned books), blotting and strikethroughs, have been undone but stains remain although text is now visible. Some form of cleaning was likely done to this book.

I listed all the condition notes I could find, perhaps even nitpicking. The book is handsome, with a nice sleeve and attractive binding. It will add nicely to any incunable library.

Also, the expurgation is an interesting talking point. You could reference to a banned books list and make the connection; from the portions that have been purged, I would guess that a commentator, not Juvenal, was banned.

There is also opportunity for scholarship regarding the 1633 ownership annotation on the title page.