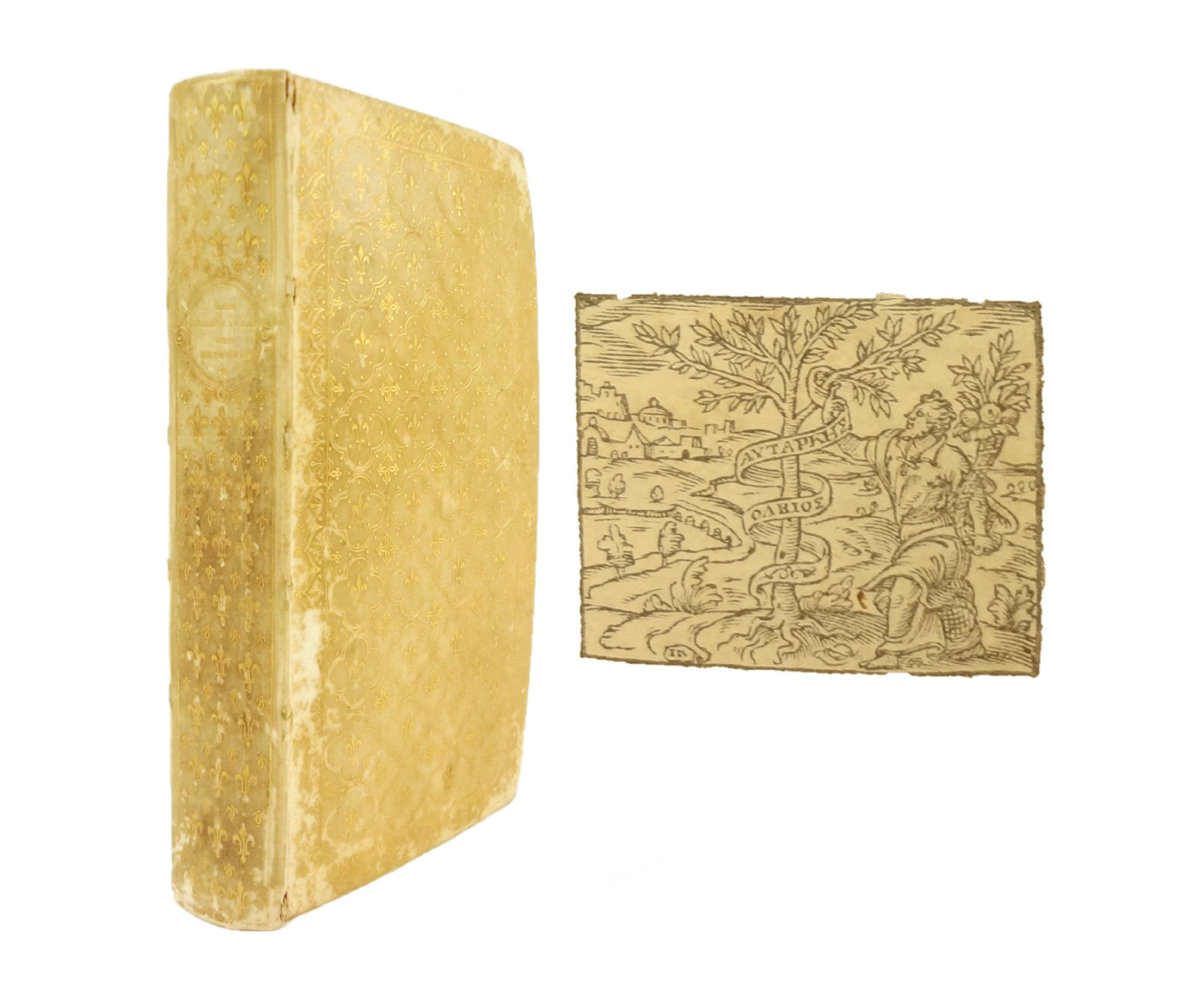 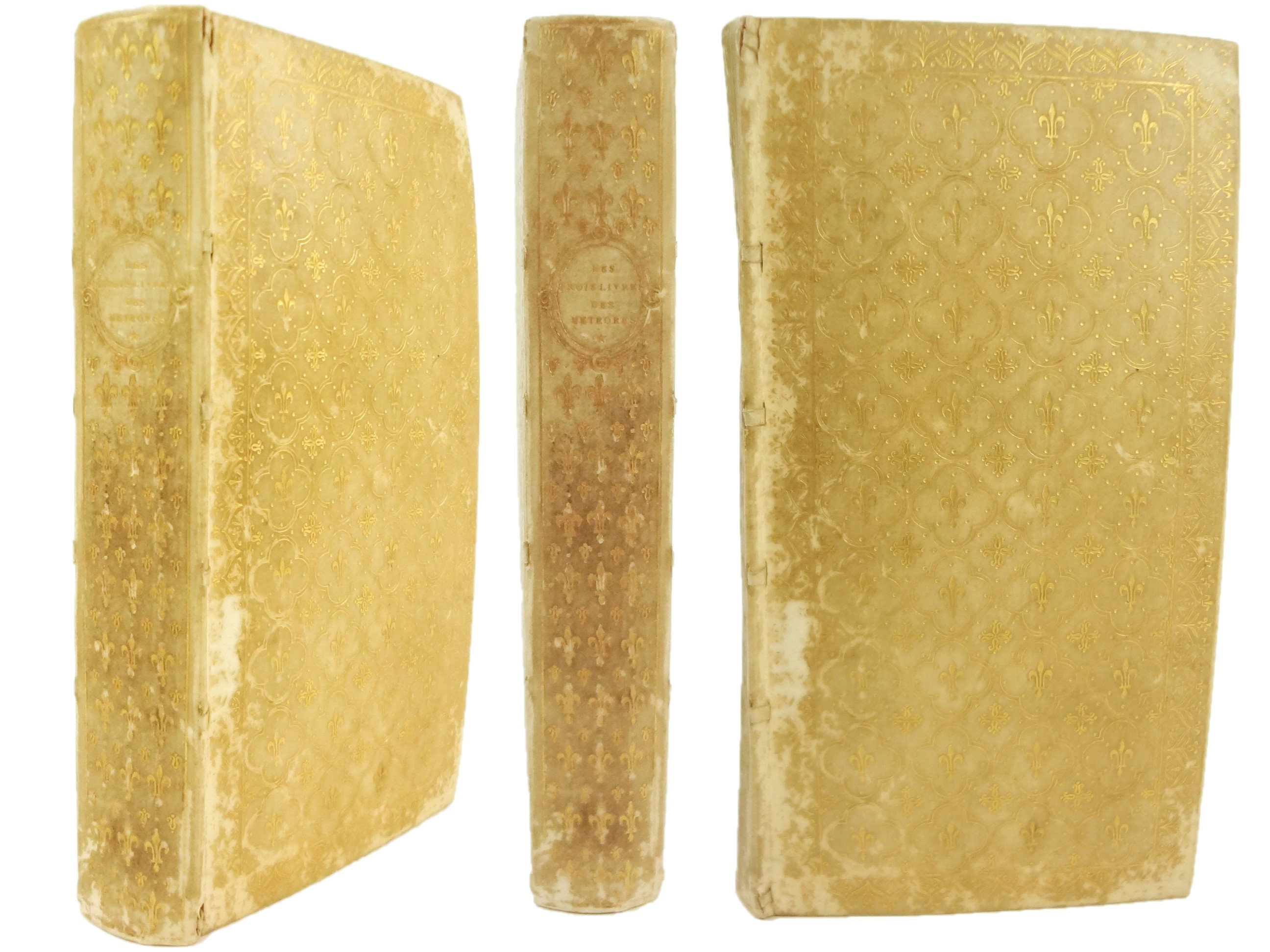 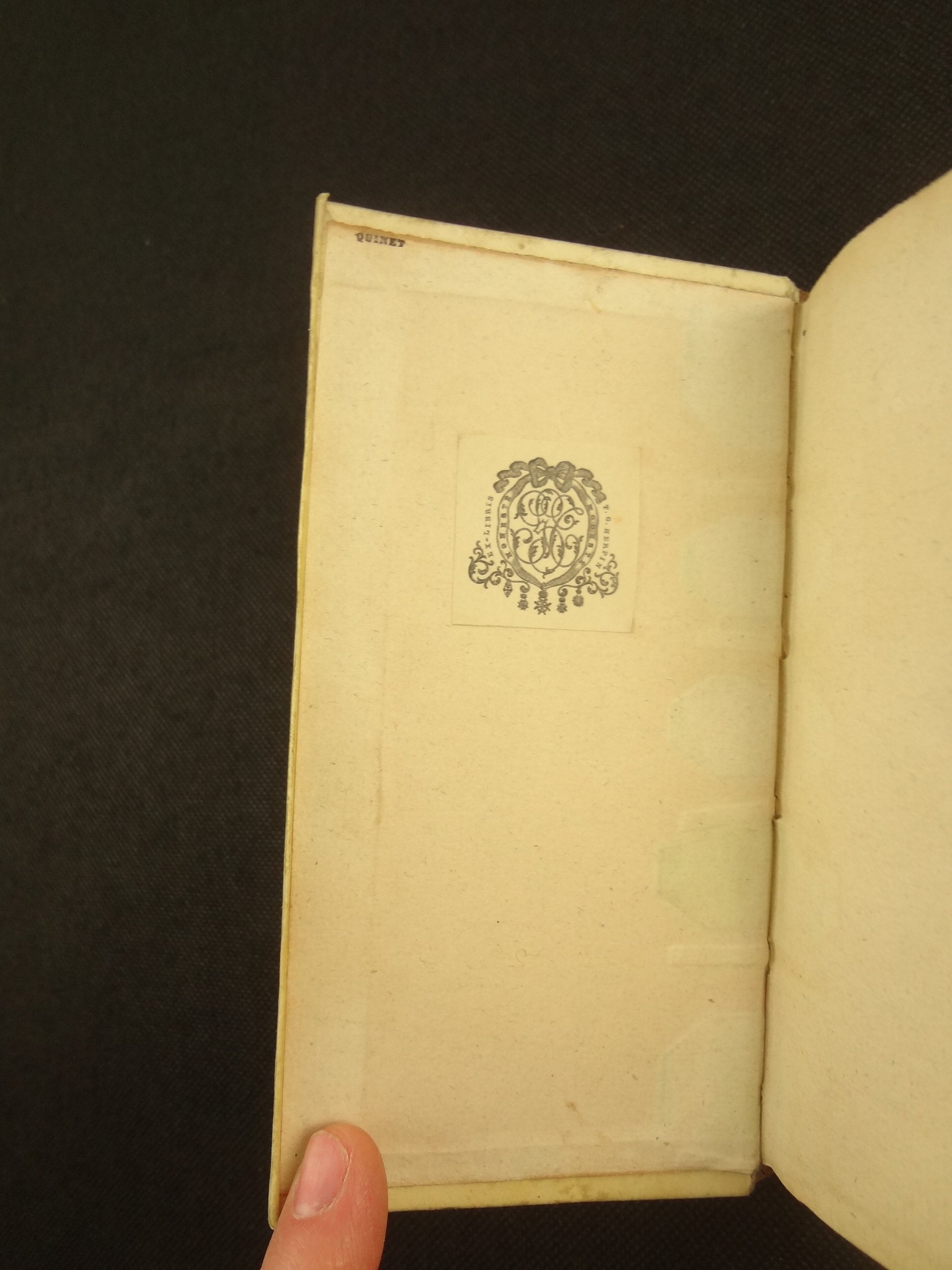 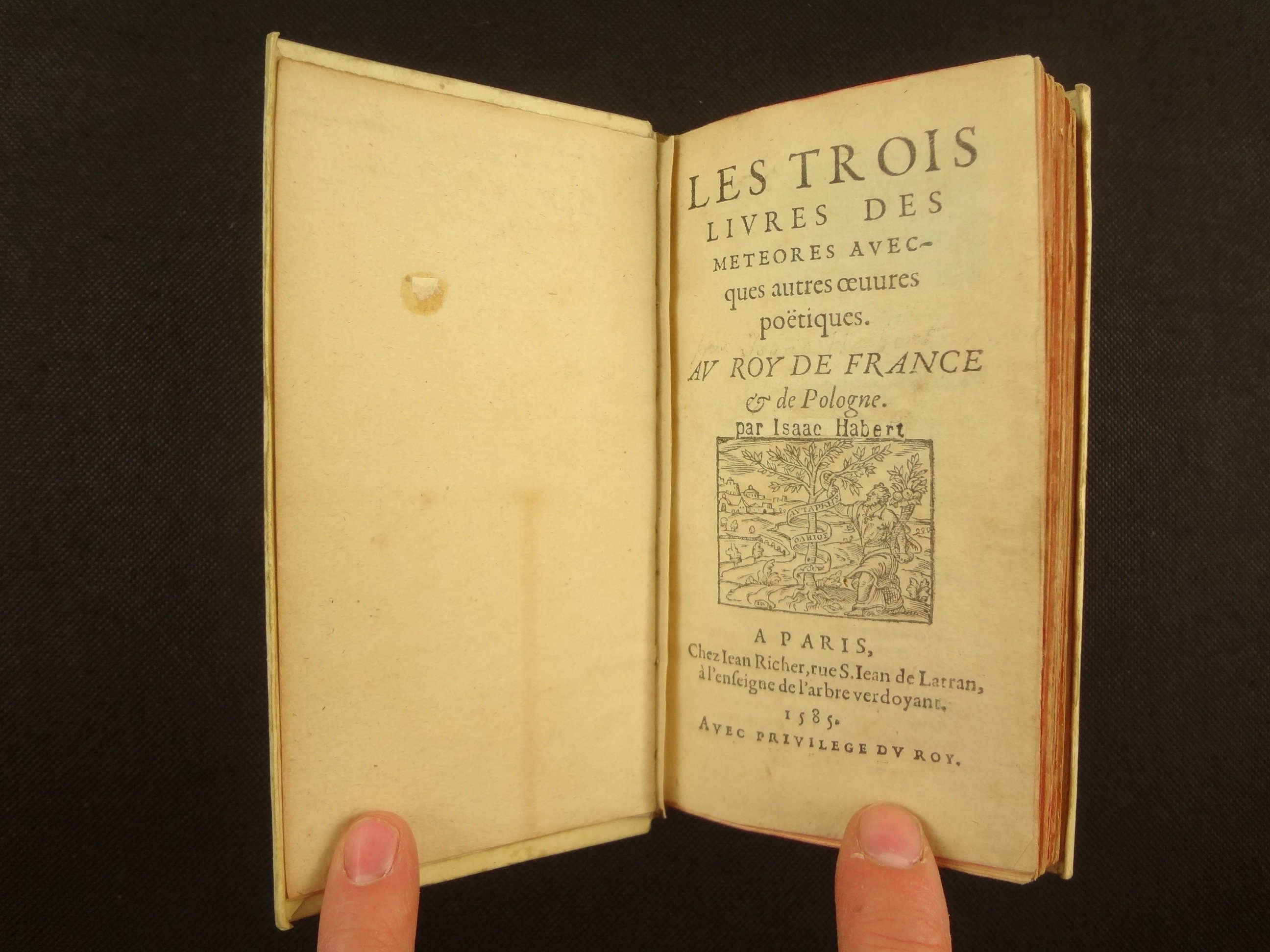 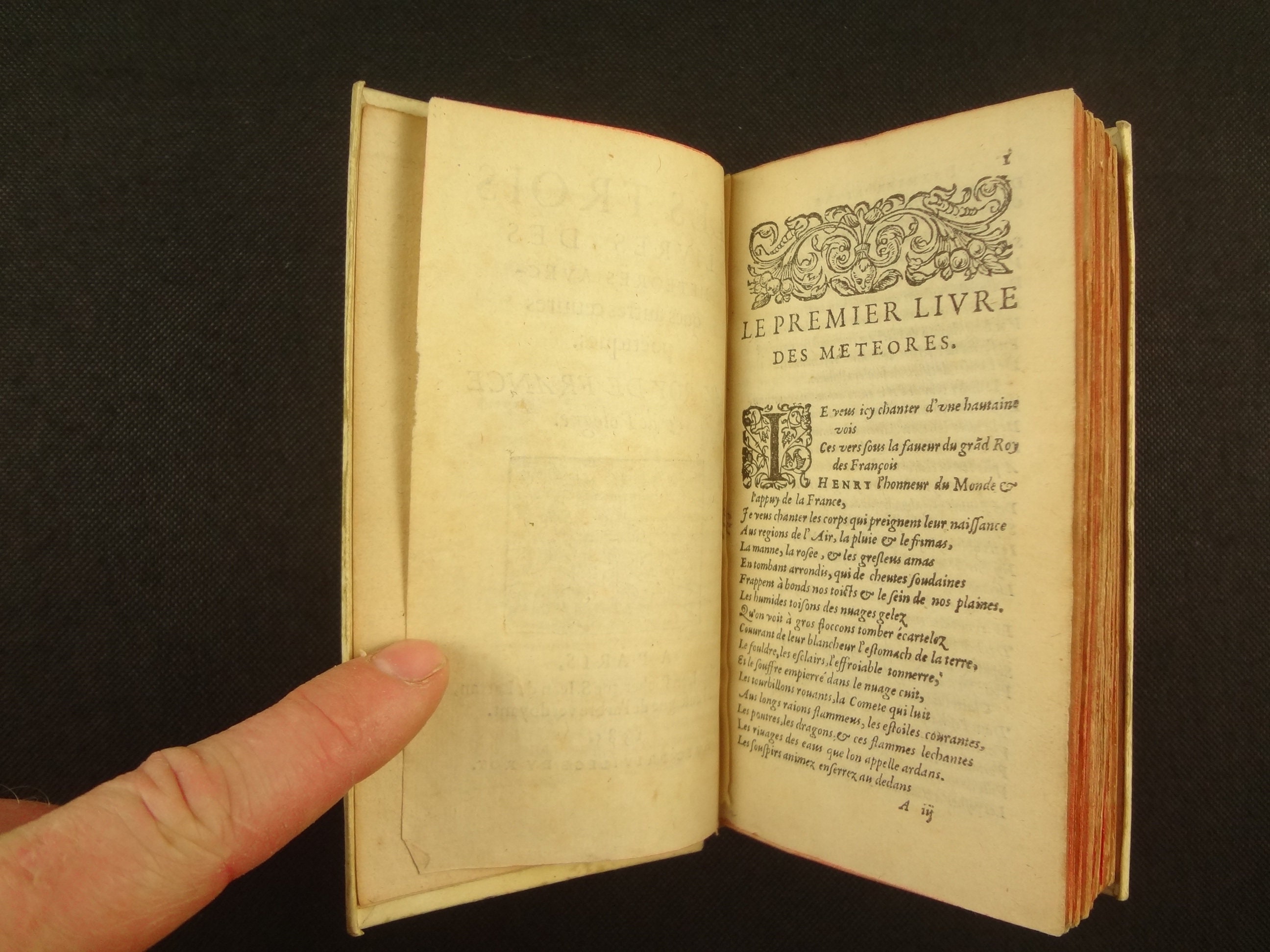 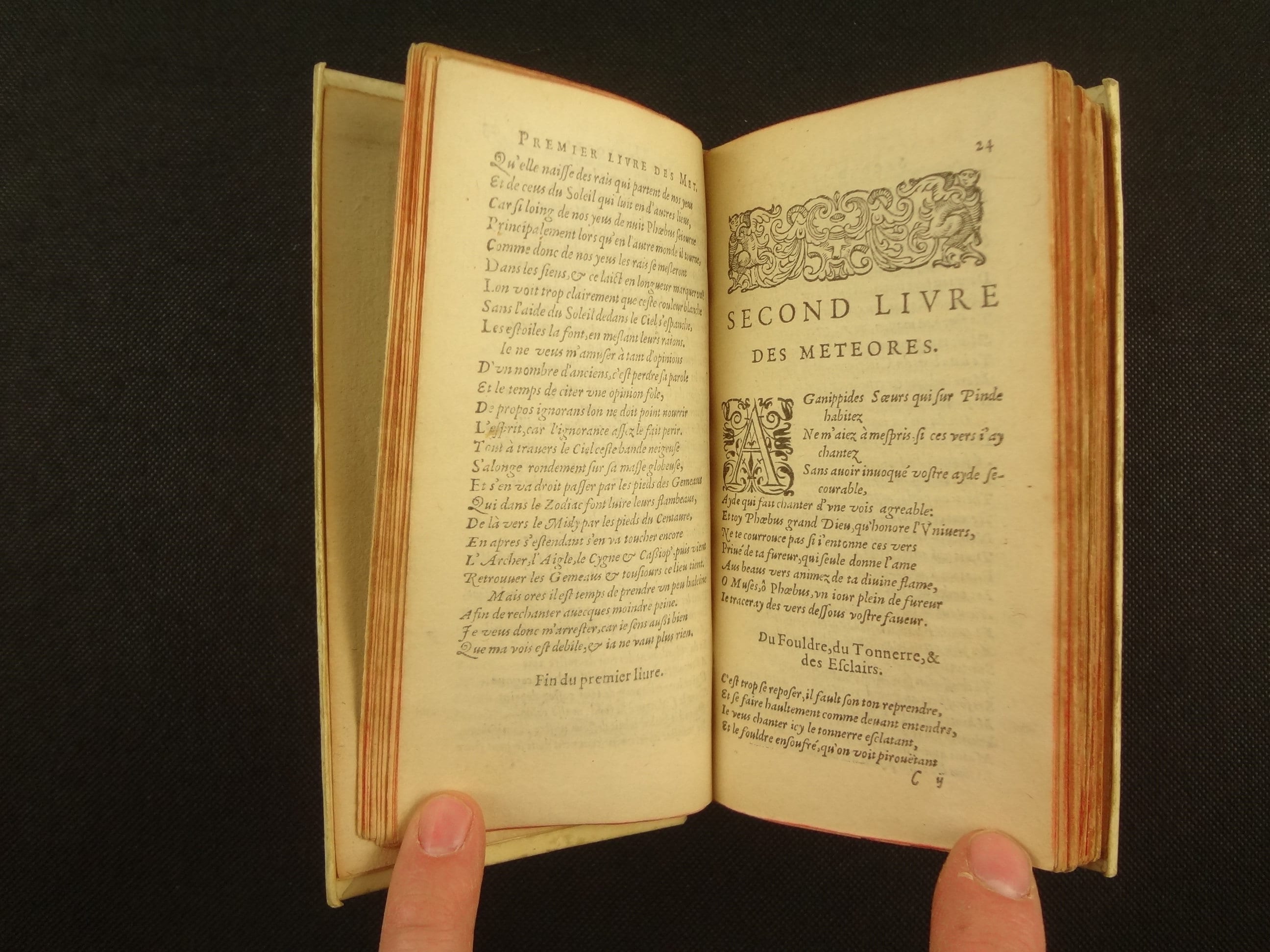 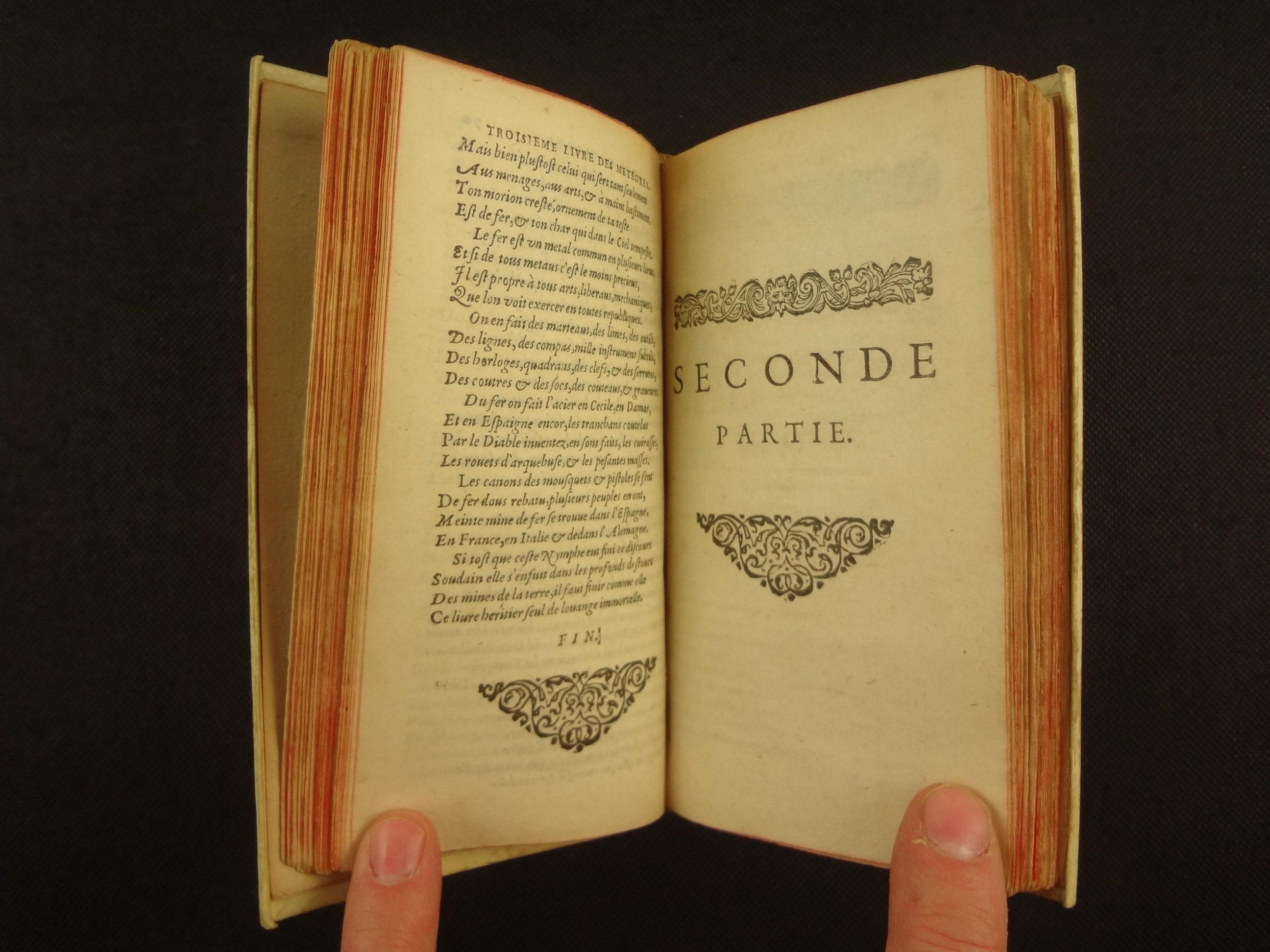 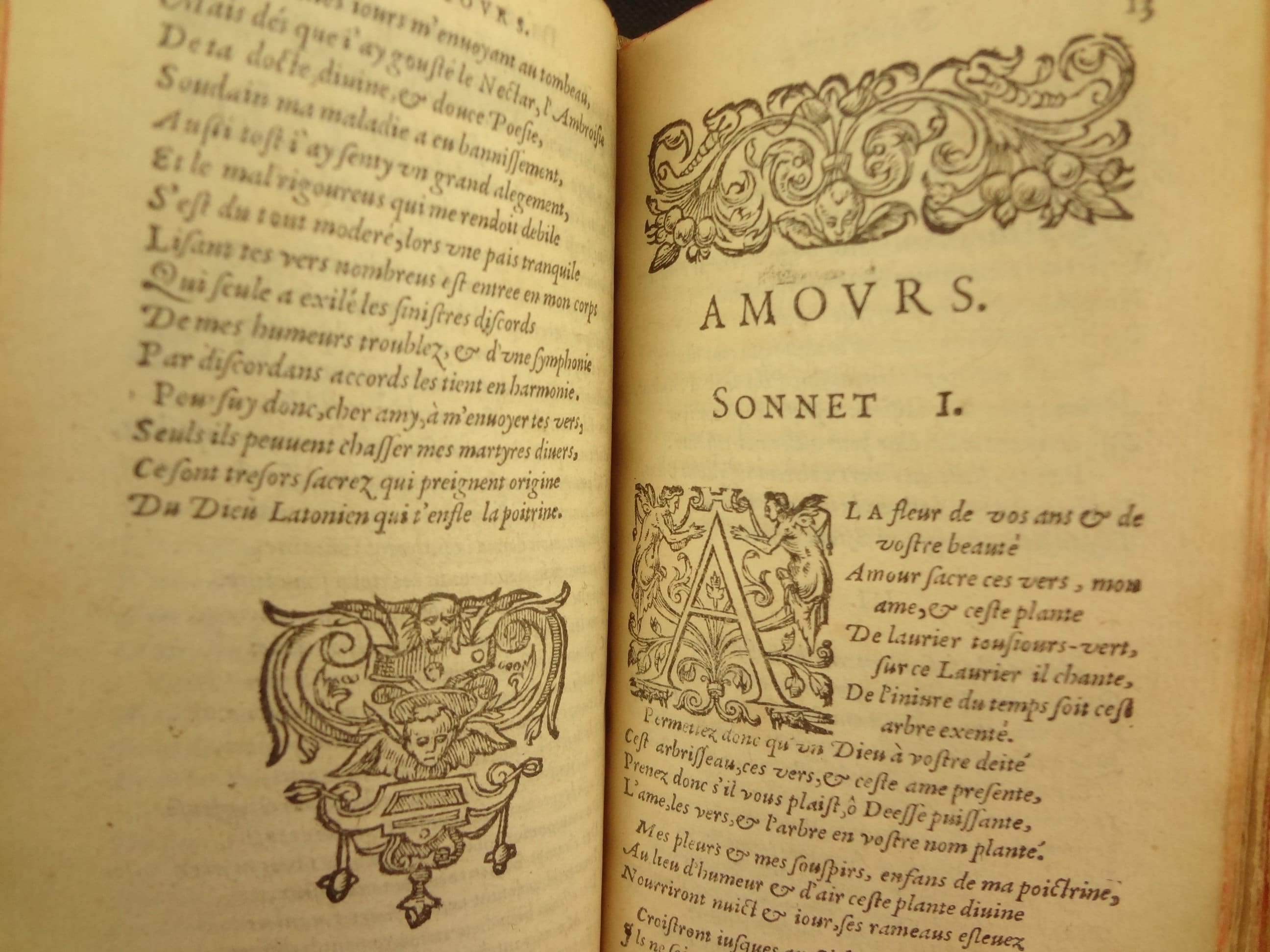 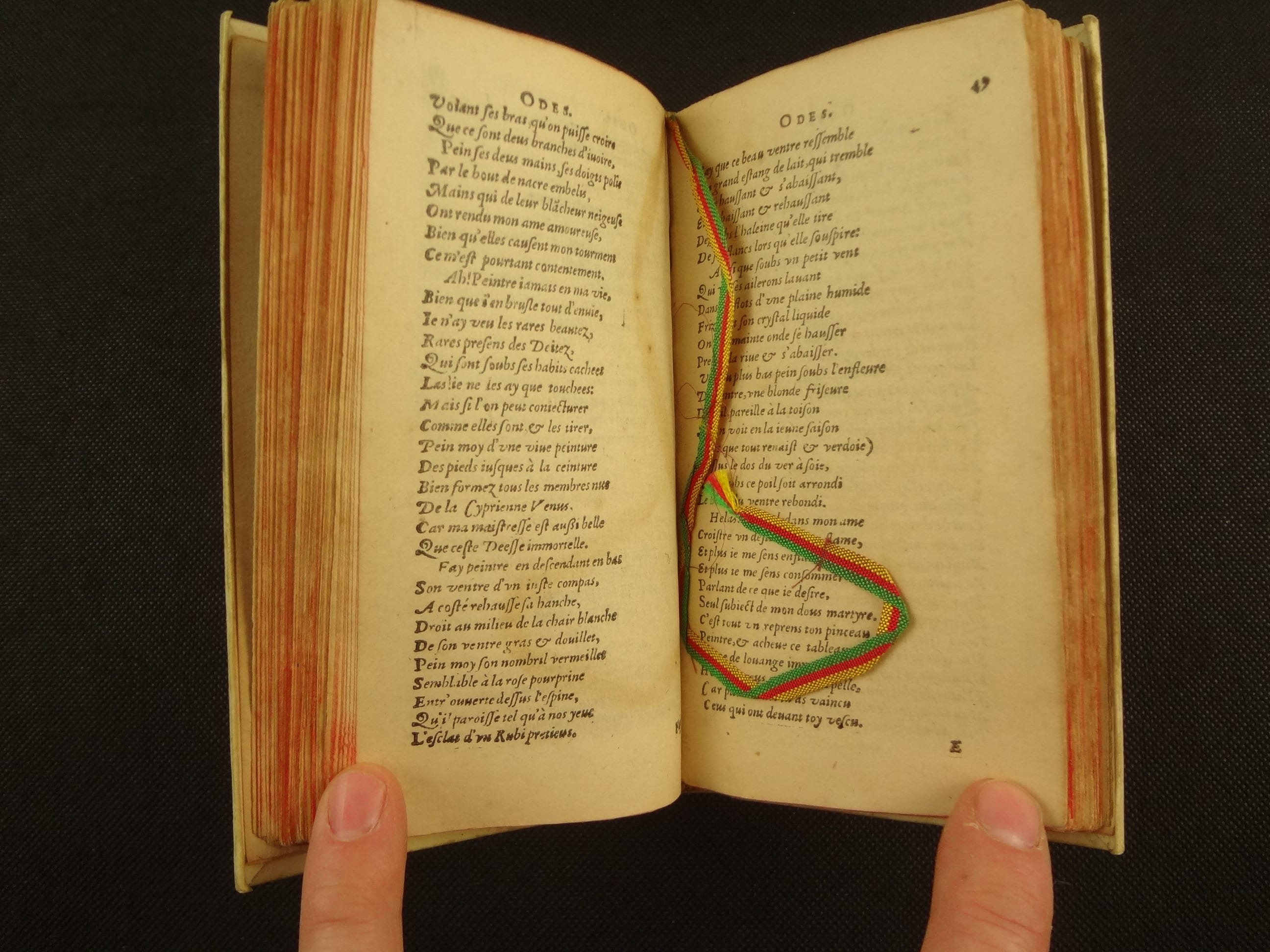 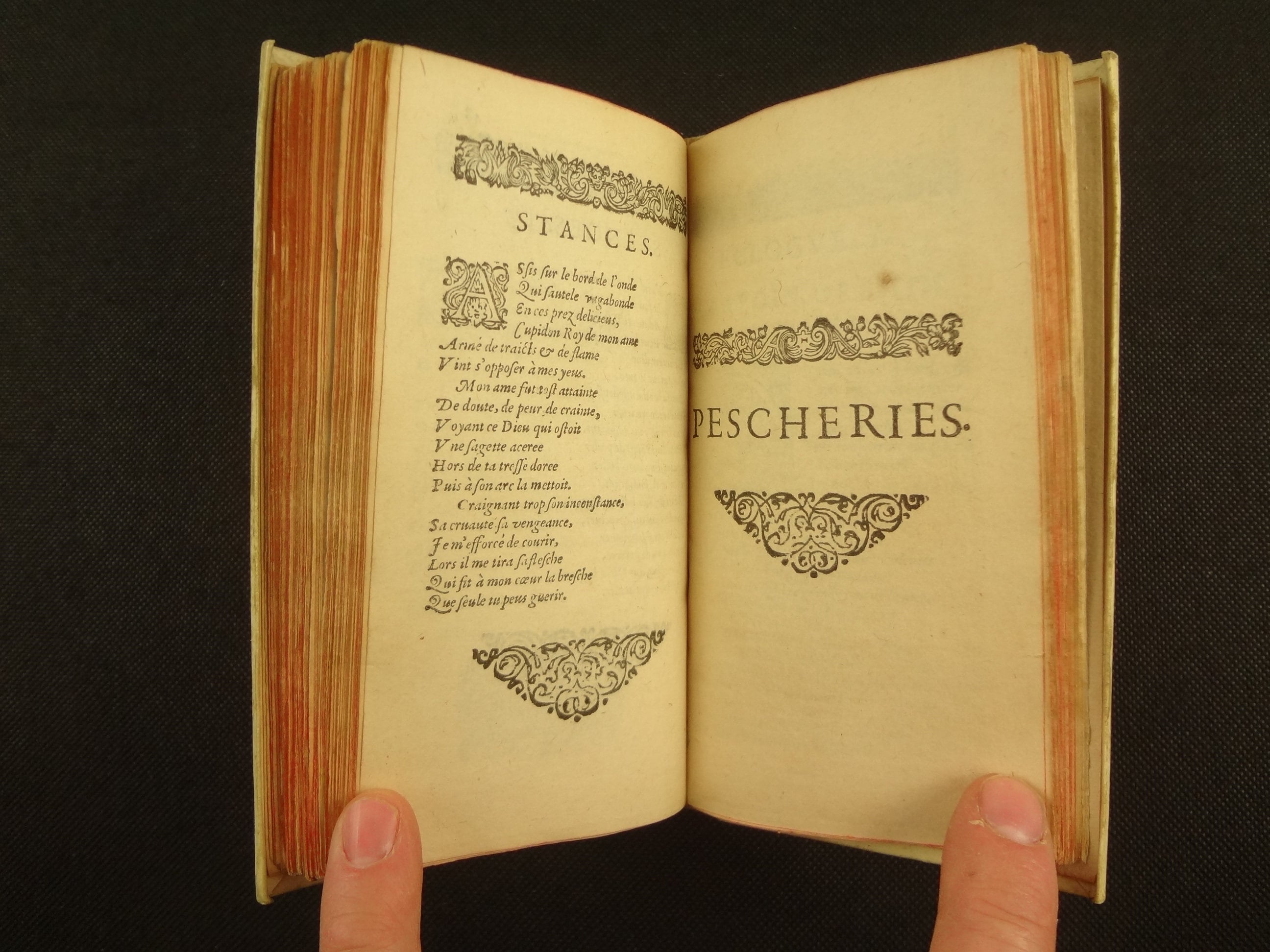 The first and only edition of this 16th century poetical work on Meteors by Isaac Habert, of the noted 16th century family of literary Haberts. This copy with a handsome signed binding by Quinet and with the provenance of Herpin's poetical collection. Several parts in one volume; after the Trois Meteores are the Odes, Sonnets, Bergeries and Ouvres Chrestiennes, also by Habert.

This work is noted for being filled with the science of its time (Meteores) and for being the beginning of Baroque poetry due to the complex usage of the French language employed by Habert.

“Les trois livres des Meteores - These poems are from Isaac Habert, son of Pierre Habert, author of a Trailé du bien de la paix… (1580). This volume of Isaac, dedicated to King Henry III, contains, with Meteora, hundreds of sonnets, odes, sheepfolds, (fishing poetry) and Christian works. Isaac Habert is, to my knowledge, the first descriptive poet, at least dated. He had read Lucretia, the physics of Aristotle and Pliny the naturalist… and he seemed to me at least at the level of the knowledge of his time in physics, in astronomy, in meteorology. He deals in the last book with precious stones and metals...”

“Isaac Habert's style, though generally sustained, is remarkably clear and correct; he is a very skillful versifier, one reads it without boredom, and I believe that his poem of Meteors would not be without appeal for a scientist engaged in these kinds of studies and who would like to know the state of science at this time… Here are certainly the first French verses which, for the style, the number, the poetic cadence, could have predicted what would become of the language under skillful feathers. And who had ever heard of Isaac Habert?” – Violet le Duc, Catalogue des Livres Composant la Bibliotheque Poetique…, p. 286-288, 1843 (translated)

"His best production is his poem Meteora, where he exposes in a clear style, what was known about his time, especially according to Aristotle and Pliny, on physics, astronomy, minerals...” – Grente, Dictionnaire des lettres, XVIe siècle, p. 372 (translated)

"During the sixteenth century the Habert family swarmed with poets . François Habert translated Ovid and Horace , wrote original verse , and some fables that were made over by La Fontaine ; his brother Pierre was the author of prose and poetry ; Isaac , the son of Pierre , also dabbled in poetry ; and his sister Suzanne , early made a widow , studied languages , phlosophy , and theology , and betook herself to a nunnery , there to die and leave many unpublished manuscripts , chiefly ascetic." - Robert Hoe, The Library of Robert Hoe..., p. 31-32, 1895

With the ex-libris plate of Tobie-Gustave Herpin. Herpin assembled a notable poetical collection which was sold in two auctions, L'Hotel Drouot (May 27-29, 1903) and Silvestre Rooms (May 31, 1904). I reviewed the Drouot catalogue and didn't find the book, so it's likely it was sold in the second auction, for which I couldn't find the catalogue.

Binding stamped by “Quinet” on the pastedown. “.. active in Paris in the second half of the 19th century. Quinet is listed in an 1847 French business directory, and is mentioned in an 1894 review of the Grolier Club's exhibition of 'Recent Bookbindings.' In the latter, author Brander Matthews reserved the highest praise for Parisian binders Capé, Cuzin, Chambolle-Duru, De Samblancx, Gruel and Engelman, Joly, Lortic, Marius Michel, Niedrée, Quinet, and Ruban (and he saw originality and promise in an up-and-coming English artisan named Cobden-Sanderson).” – Pirages website, advertisement for Paul & Virginie (1878).

The Universal Short Title Catalogue (No. 14044) lists 12 copies, but curiously the BnF has many copies of the work at many locations (one wonders if the same book is being called for at more than one location). Only one copy in the U.S. at the Houghton Library (FC5 H1137 D585t).

Previous Sales of the Work -

Erased (but slightly visible) name on title page; also, author added by type strip pasted onto title page. 1st gathering seems possibly mounted (stub at gutter, slightest bit out of alignment with next gathering). Slight toning near edges. Occasional spot in paper and dog-eared corner. Occasionally the text is lighter, perhaps washed. Silk ribbon has left a light ghost on 48/9 of the odes. Slight toning to leaves nearer rear. The blank D4, at the rear, was not bound in.

Mostly quite clean. A nice volume.