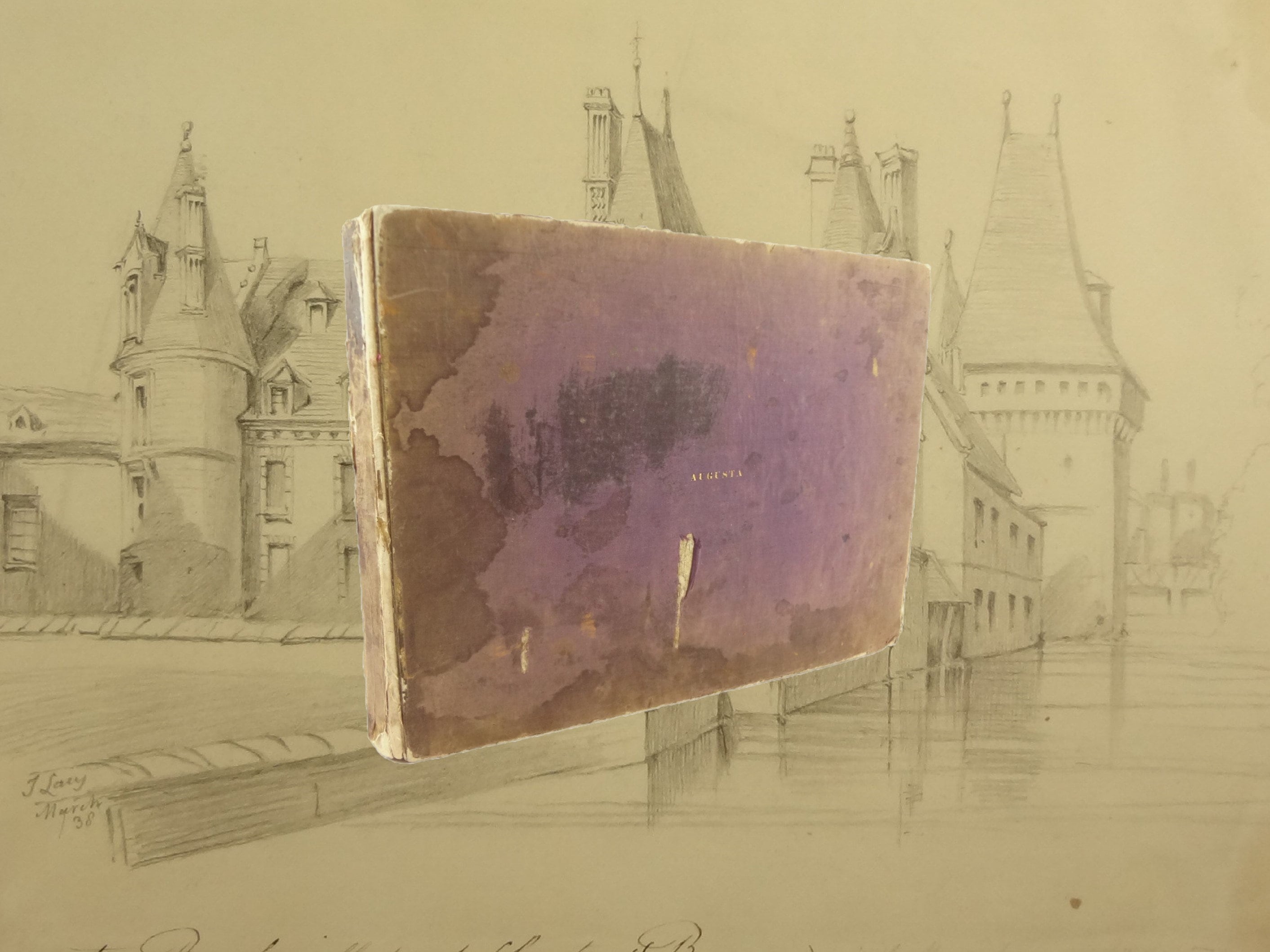 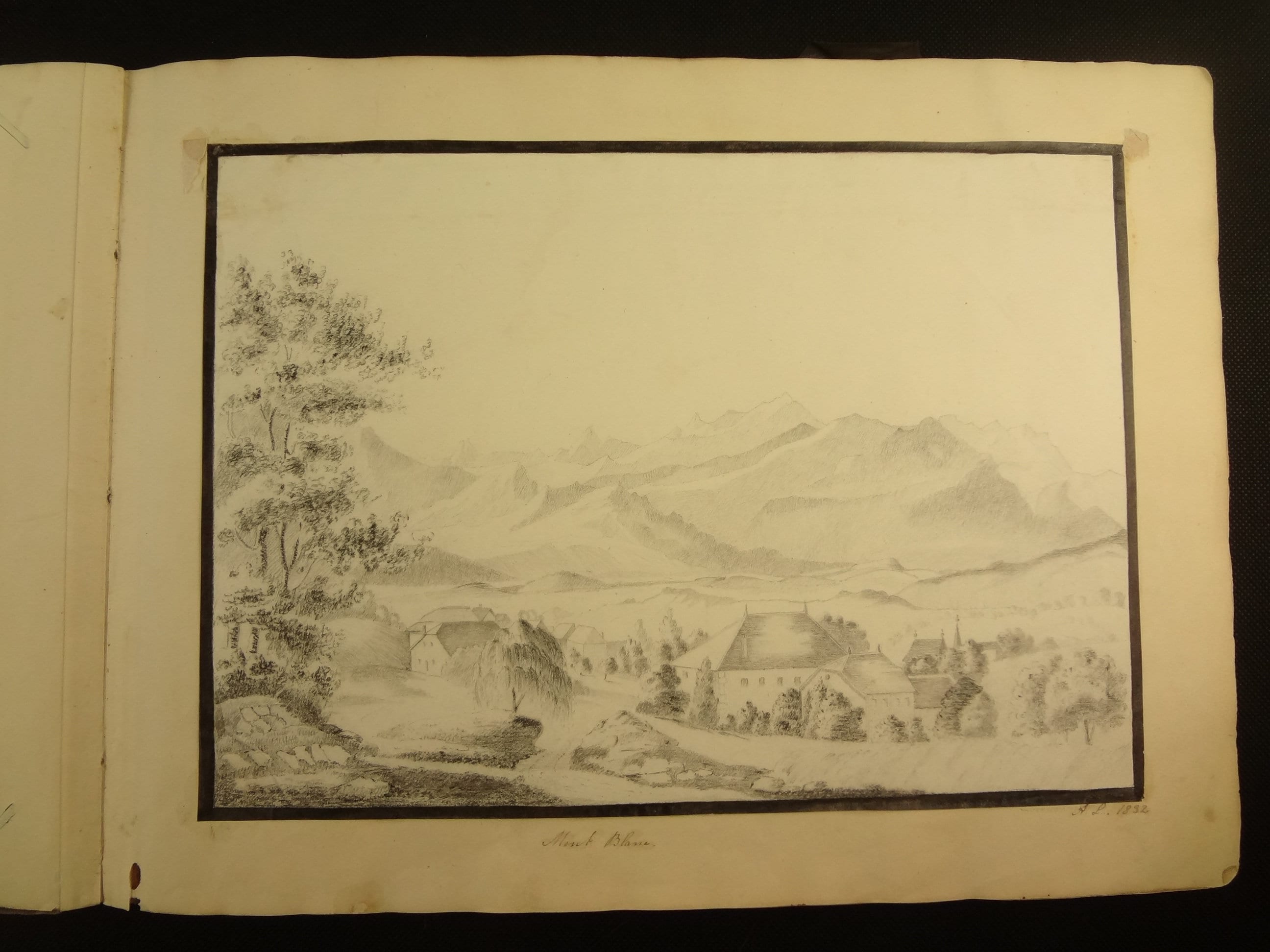 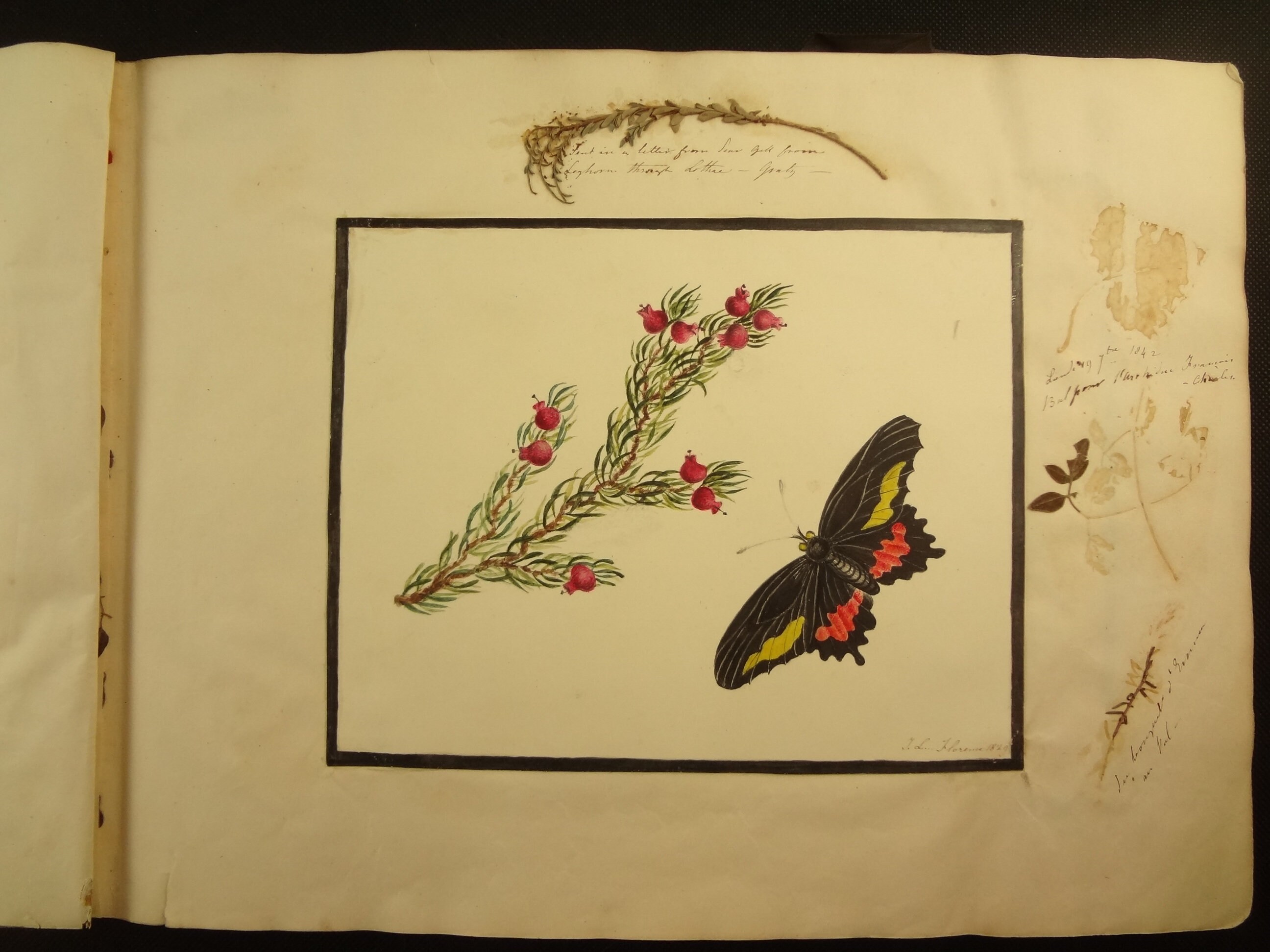 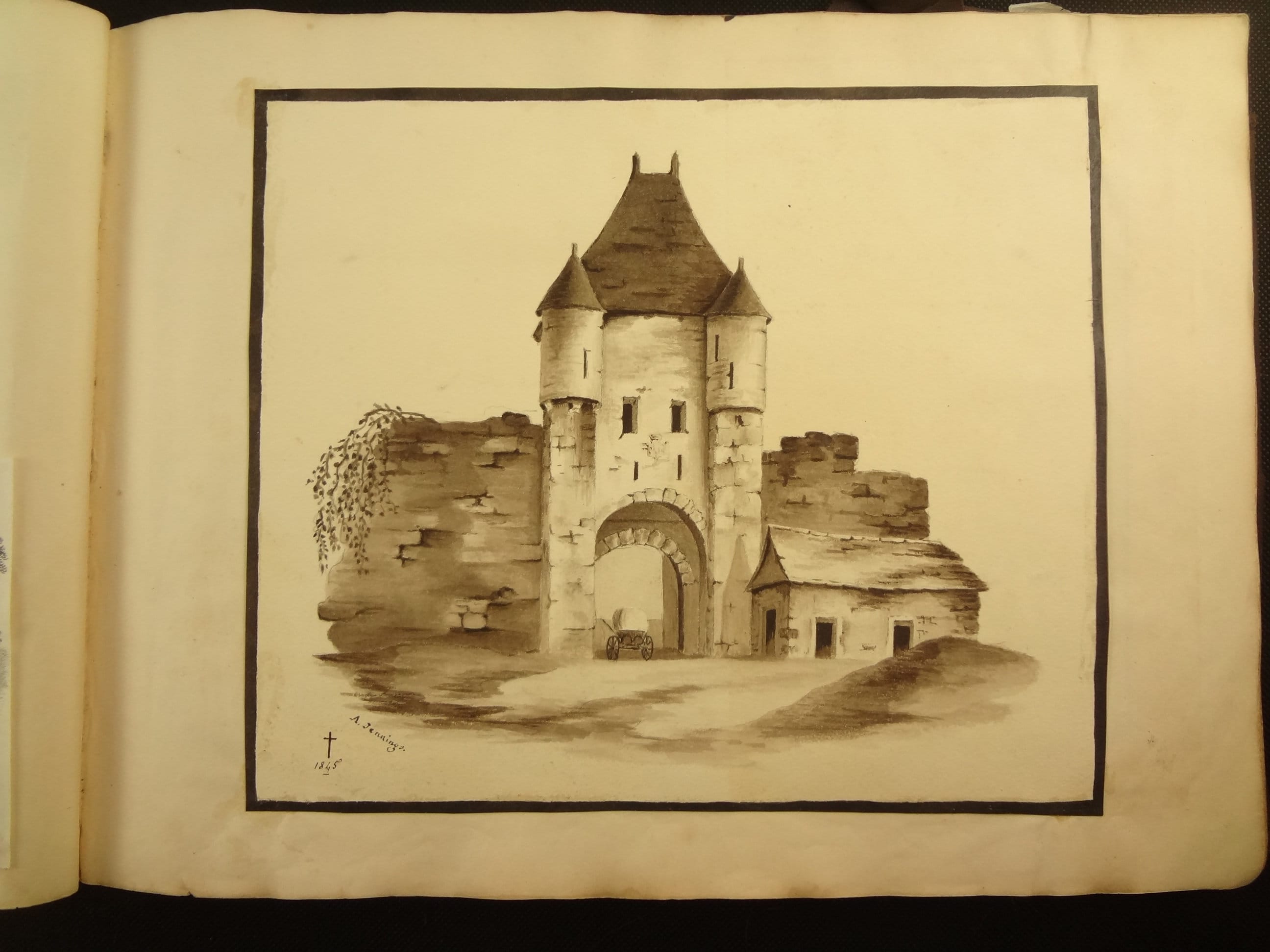 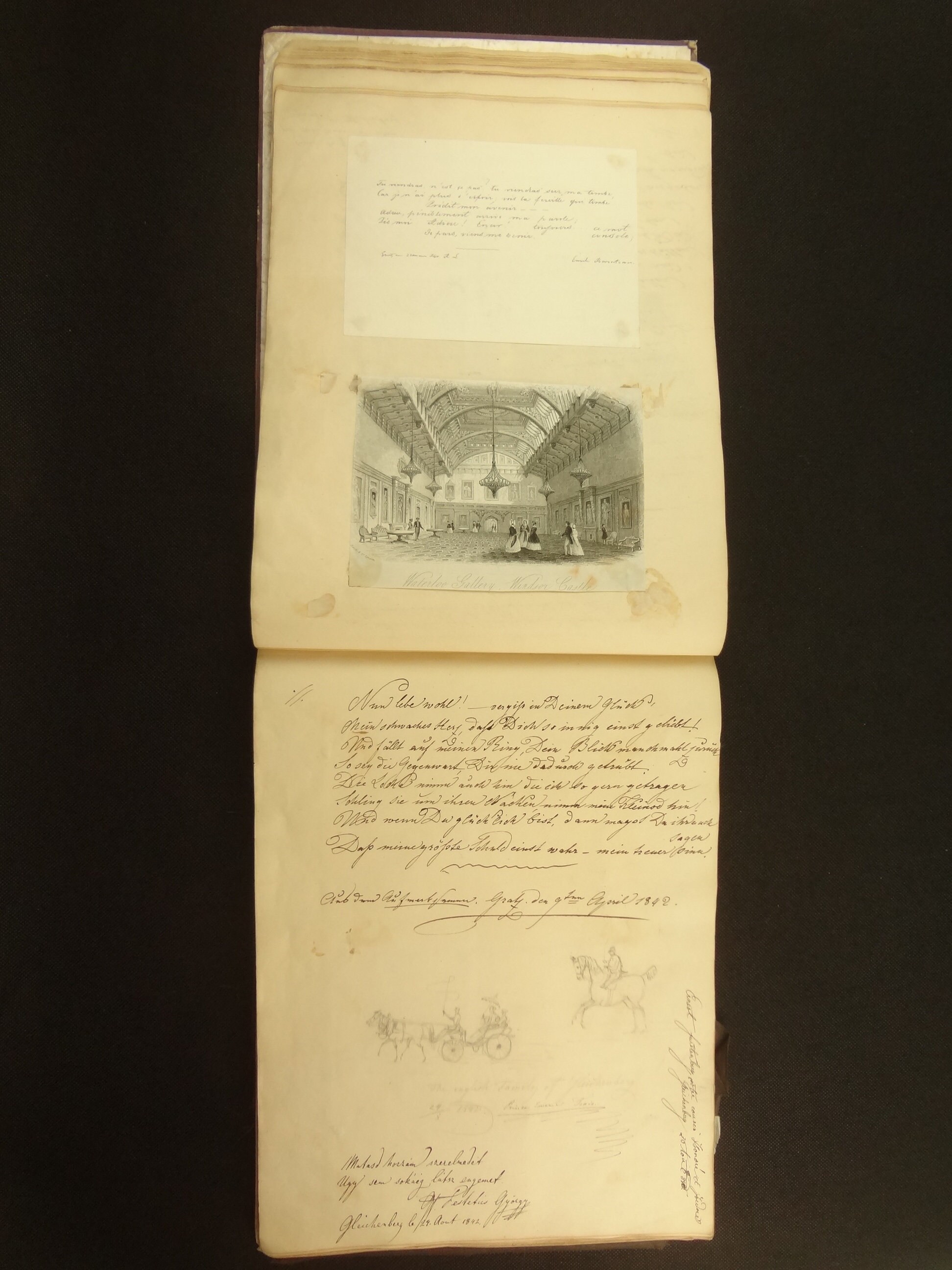 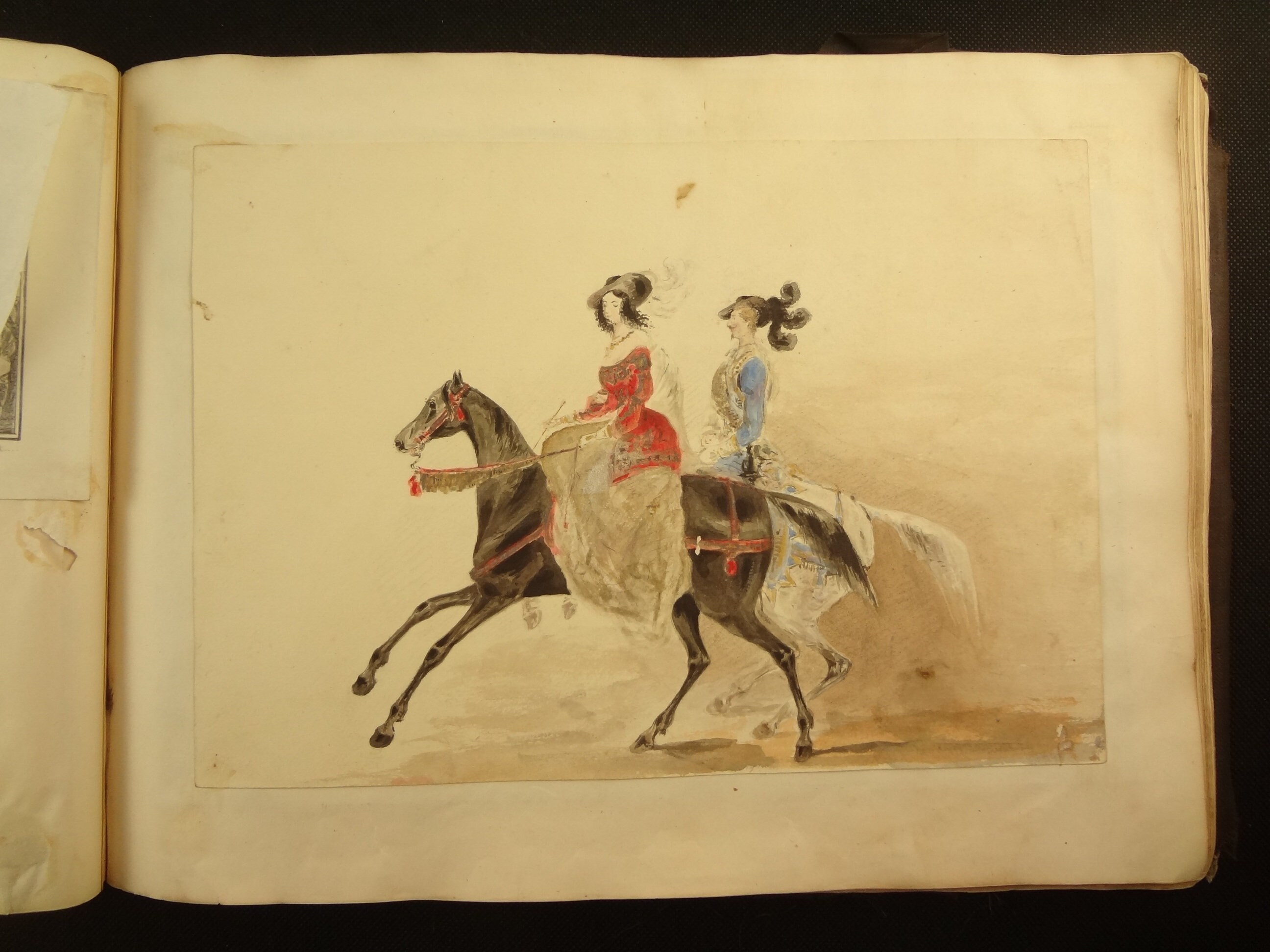 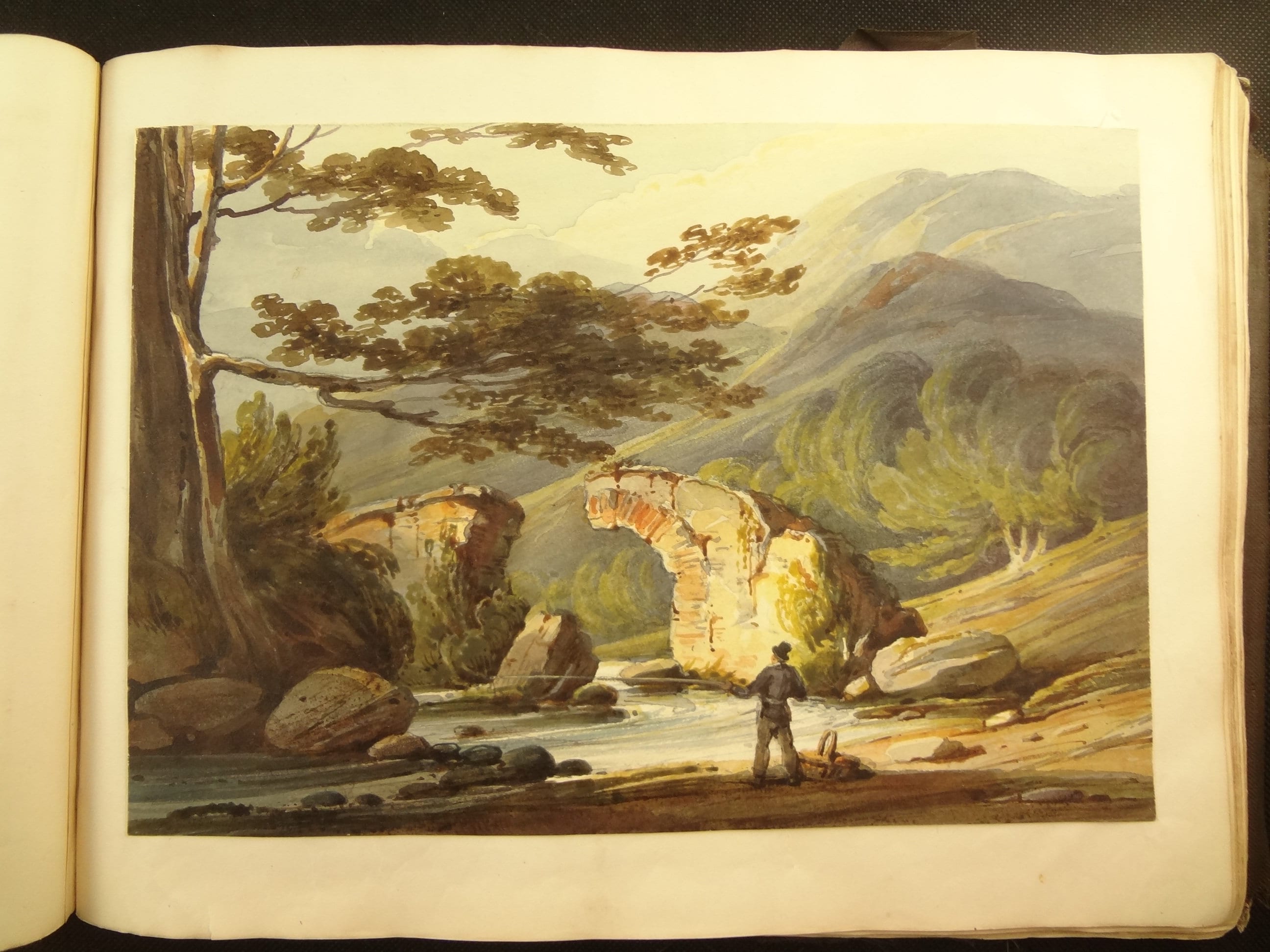 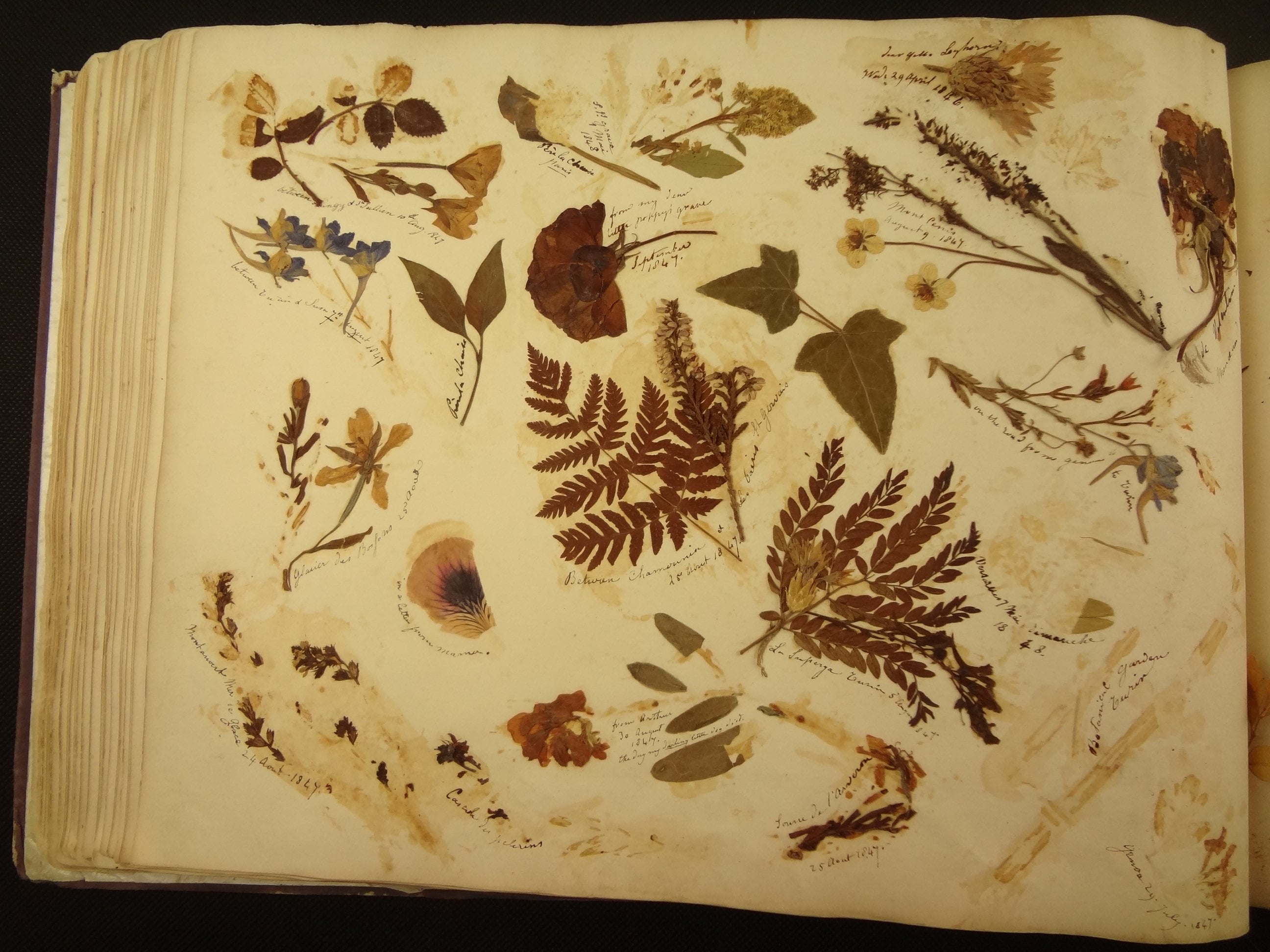 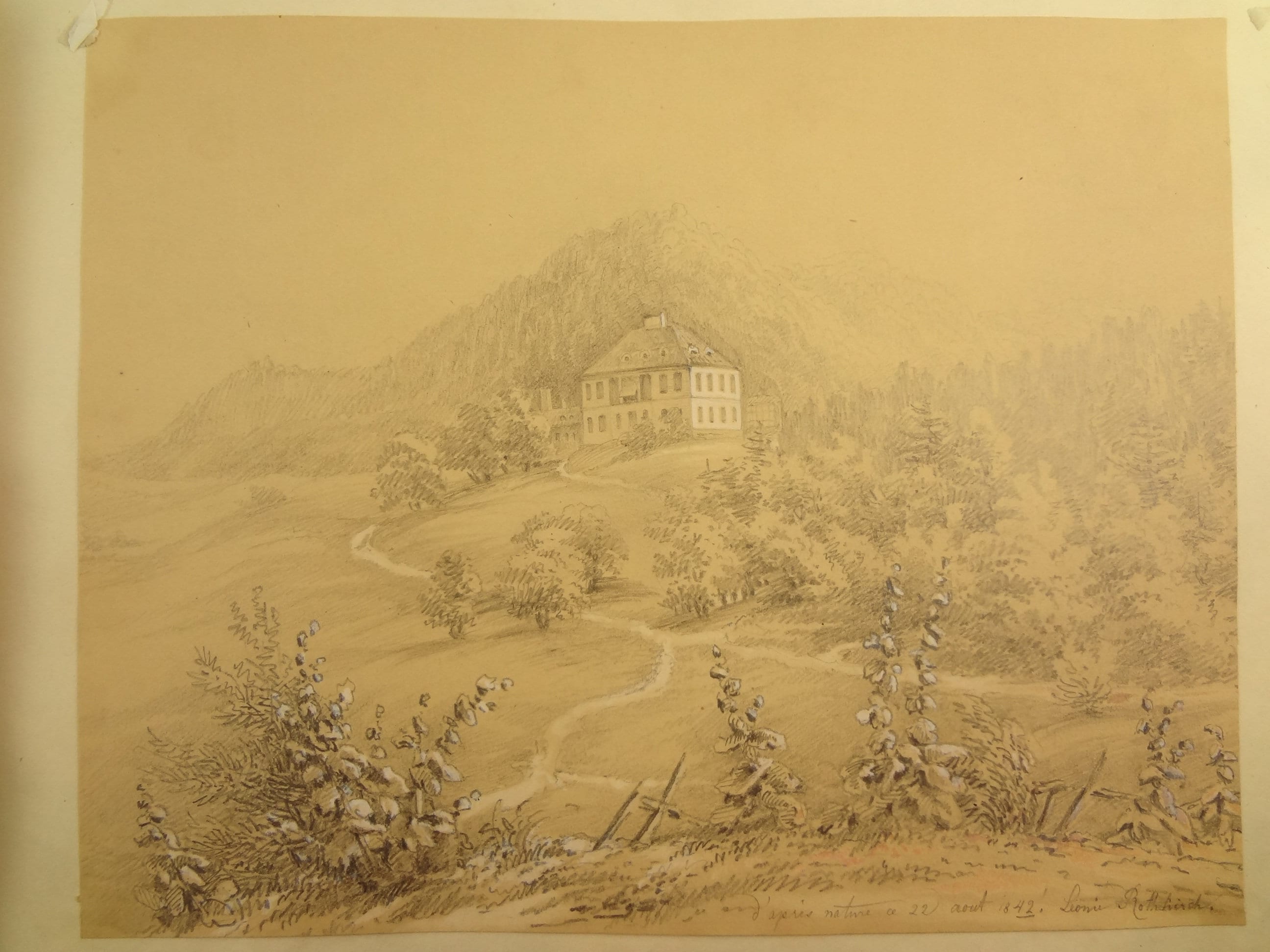 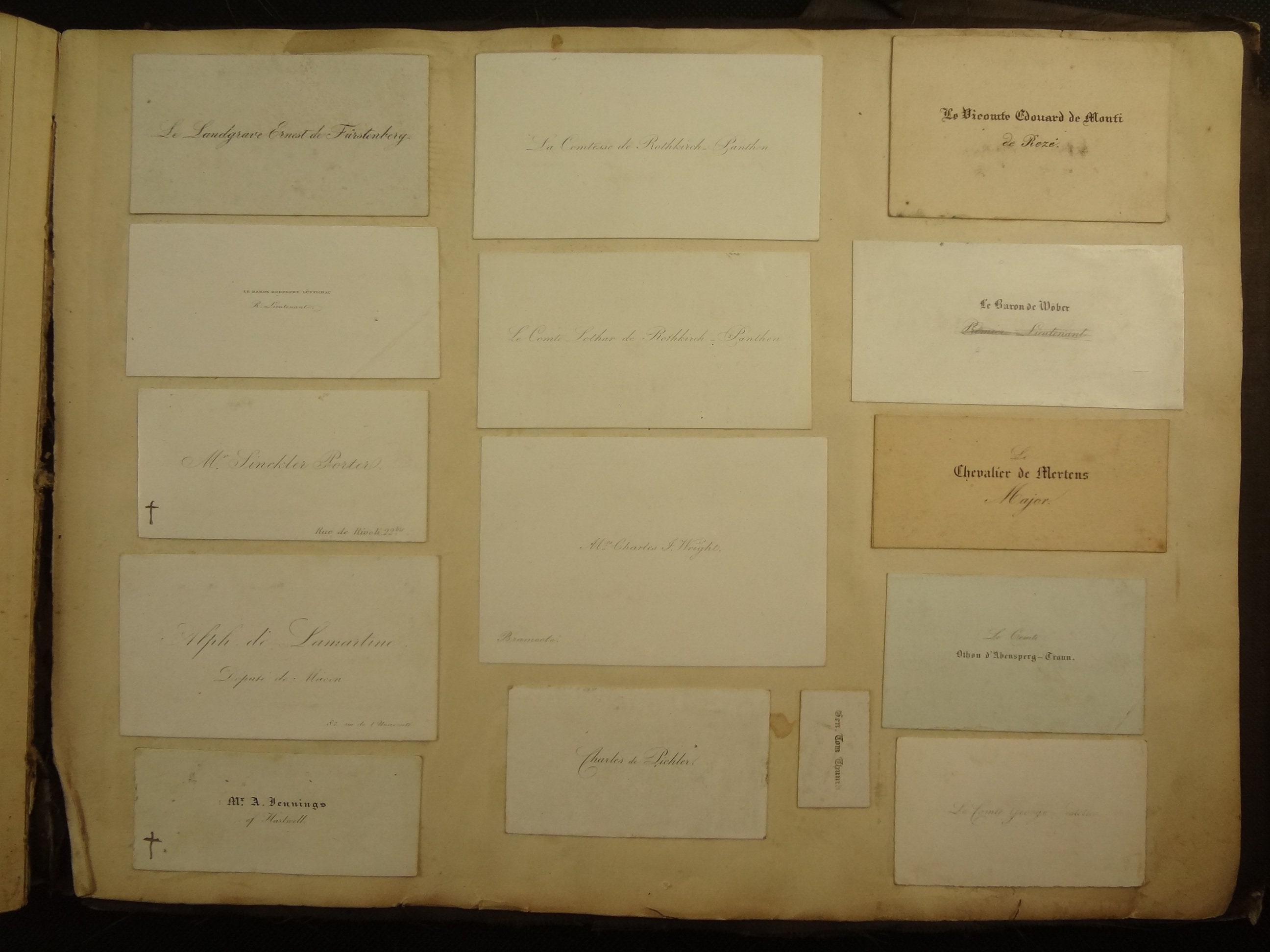 A fascinating scrapbook, documenting European travel and high-class socializing, in the style of the Grand Tour, but this example documenting almost two decades of the creator's life, with entries ranging from the 1820s (butterfly plate) until the late 1840s, with many different contributors. The calling cards, pasted within, are from famous and royal personages of the 19th century, including Tom Thumb, Le Comte George Festetics, the D'Orsay family, the Rothkirch-Panthen family and Vicounte Edouard de Monti (among others).

Throughout the album are wonderful full-page graphite sketches, mainly of landscapes. There are also watercolors, including a very handsome watercolor of a man angling by an ancient crumbling bridge, and another attractive piece capturing a man and woman riding horses. The art comes from a variety of artists, for example Le Baron Rodolphe Luttichau applied his signature and initial to many of the pieces, but there are other examples, from other artists, including one signed by Leonie Rothkirch ("d'apres nature a 22 aout 1842) and one by A. Jennings ("of Hartwell", per his calling card).

One small watercolor, of a man and woman riding horses with great aplomb, notes (in graphite) that the gentleman rider is one "Prince Tavis". I can only find one small reference to this man; August de Marmont's memoirs calls him a trustworthy man in the Memoirs du duc de Raguse (p427, 1857).

The album's creator seemed to have close ties to the French nobility. The calling card of Hector Lucchisi-Palli is included, who was the second husband of Princess Marie-Caroline of Bourbon-Sicily, and the step-father of the Compte de Chamford, Prince Henri d' Artois, the last living member of the House of Bourbon and "pretender to the throne". There are also two calling cards of the Visconte Edouard de Monti; De Monti was the aide-de-camp to the "Compte de Chambord". In addition, De Monti wrote at least four of the inserted notes; two on fringed cards, regarding a marriage of Alphonse and Camille in March of 1840, and two in June of 1840.

While it was traditional, and encouraged that the nobility take a Grand Tour of Europe, for the sake of their education and personal growth, the dates and events in this album far extend the traditional Grand Tour, covering nearly two decades.

The album offers some clues to the identity of the Augusta. The word "Augusta" is applied, in gilt, to the front board. A sketch of a castle, with handwritten notes, assumes some familiarity with the castle. There is an inserted note, given to a "Lacy", on the occasion of her daughter Blanche's death on 14th of October 1846. Several hand-drawn portraits of a woman are pasted within, the subject is presumably the album's keeper.

The album covers entries from (at least) France, Italy, Russian and Germanic regions. The majority of the entries originate in Italy.

The signatures, and notes, are mainly English, French and German. Although, there is one Arabic entry, a quote from the poet Saadi, which I can't find record of (the English translation is given after the Arabic):

"Do you know what on the moon says the cooing turtle dove? Woe to you! Your heart be torn if you be not free to love."

I also found a Hungarian note, the translation tool I used struggled, but it was also on the theme of love.

The creator was called upon by Tom Thumb, during one of his tours of Europe. Thumb's tiny calling card is included.

Unfortunately, Augusta was a popular name among the affluent of the early 19th century. My best guess, Lady Mary Augusta Fox (nee Coventry) Holland. The dates of time away from England align; she married in 1833 and her husband served in Italy. There is a sketch of an English chapel dated 1833. There are holes in this theory though, such as the note to Lacy, on the death of her daughter; I can't correlate this to Lady Holland's life. But she was a known friend of the Countess of Blessington and the calling cards include numerous calling cards of the D'Orsay family... but the D'Orsay family was a wide-ranging name in the early 19th century.

In summary, this is a beautiful album, filled with art and memories of a woman closely tied to the nobility of Europe, mainly assembled in Italy, but with obvious ties to England and the Germanic regions. The calling cards indicate she had many visitors of noble stations, the art indicates she was a great supporter and lover of art, the handwritten notes indicate a love for literature and poetry, and the many botanical treasures indicates the creator was a lover of nature and fond of remembering. This rich album captures the educational and life ideals of a well-travelled, high-class, socializing, thoughtful and benevolent member of early 19th century society.

See pictures. The binding is quite worn, with marks and rub; I considered having it rebound, but I decided the binding was too personal to the work and should stay with it. Heavy wear to the binding, and also the hinges are cracked; the text block still holds to the spine but must be treated with respect. The cloth over the spine's joints no longer exists. Throughout the notebook the pages have toned a little. Also, some of the mounts have ceased holding and the art/plate/etc is loose. There are about 7 pages where the mounts are there but no object (missing) but predominately the album is intact. The last leaf, of calling cards, is largely loose at the gutter excepting an inch at the top of the text block still holding it in. It goes without saying, many of the plates and flowers have folds, etc. and some of the plants are incomplete or missing.