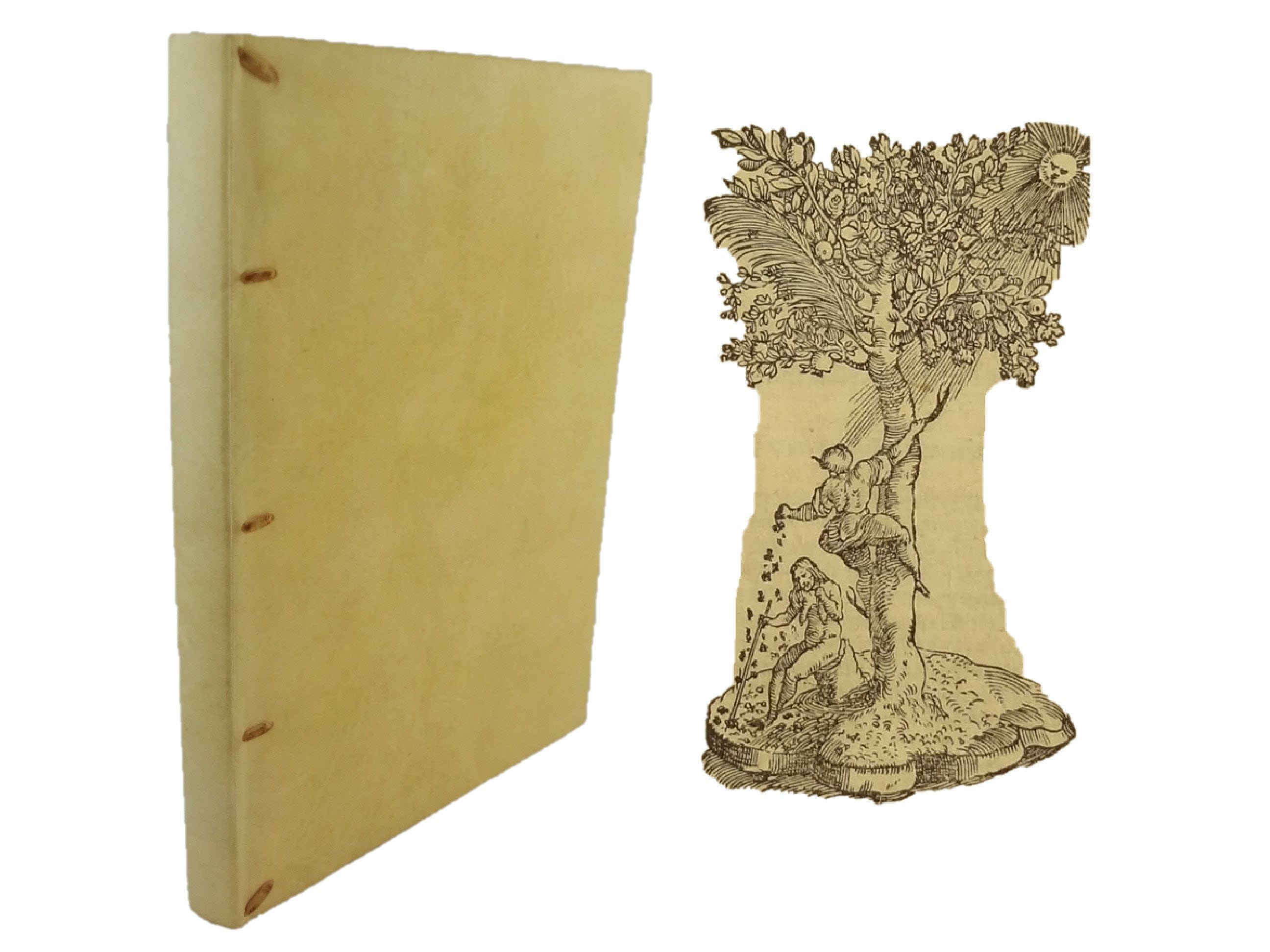 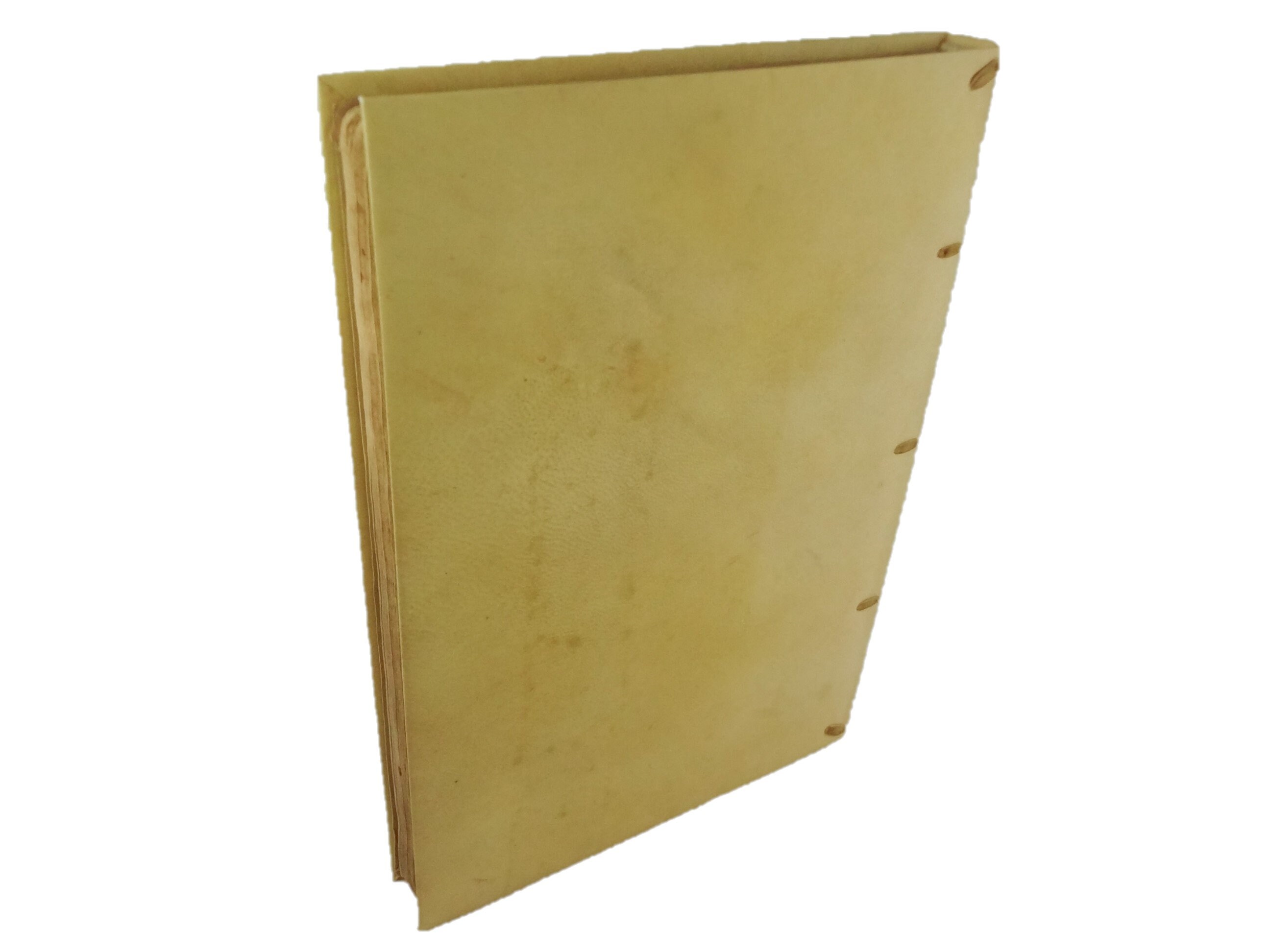 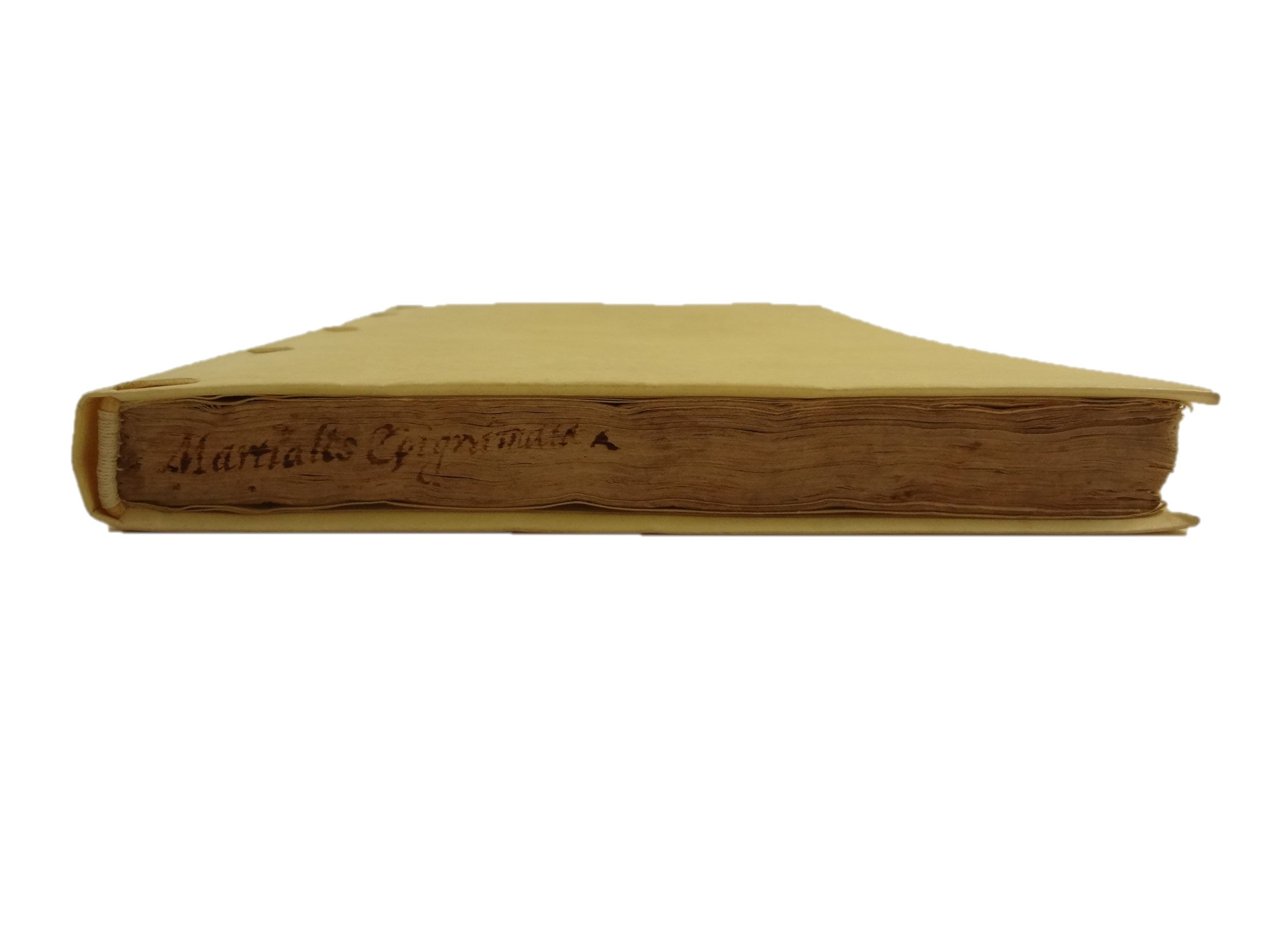 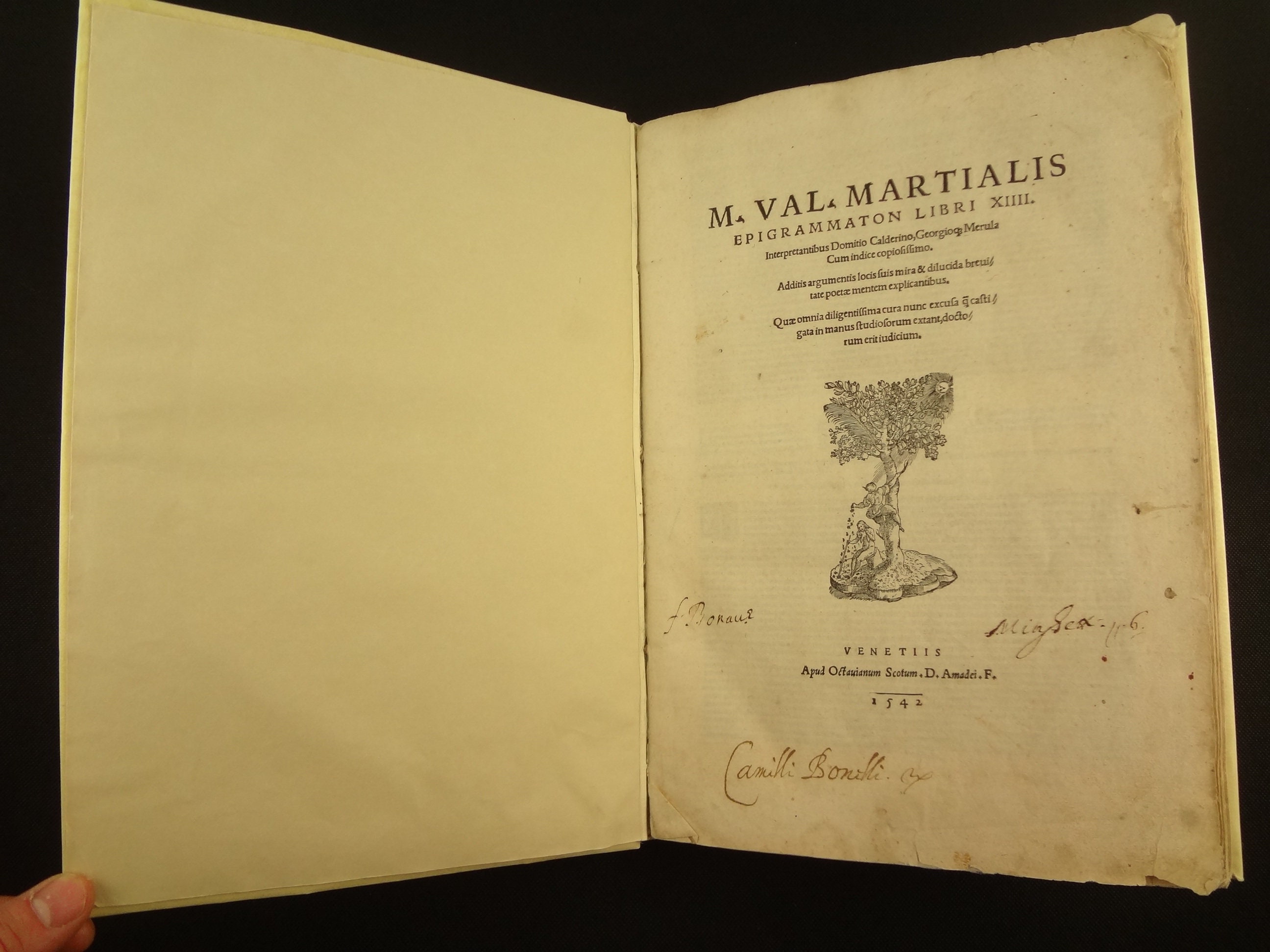 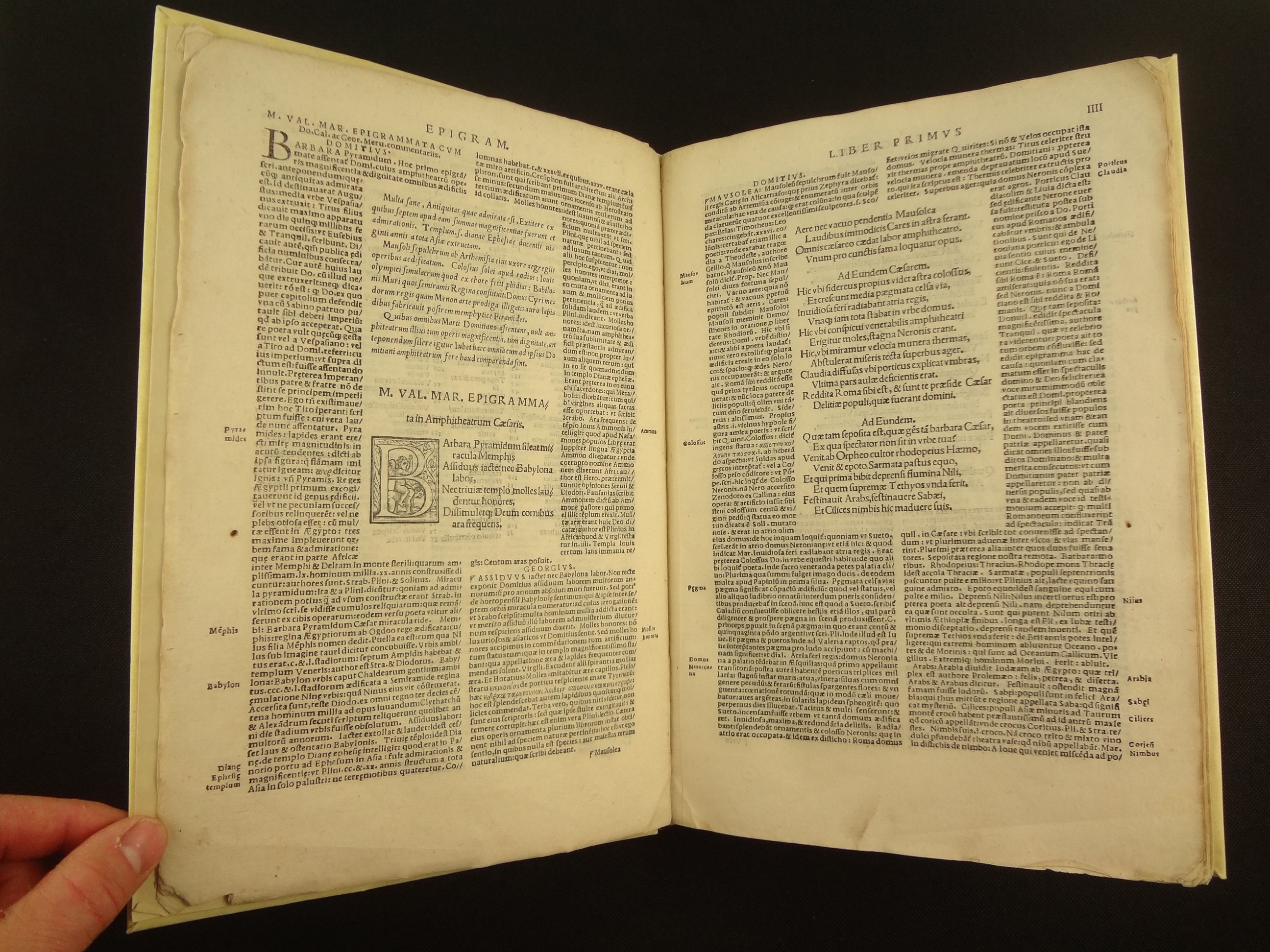 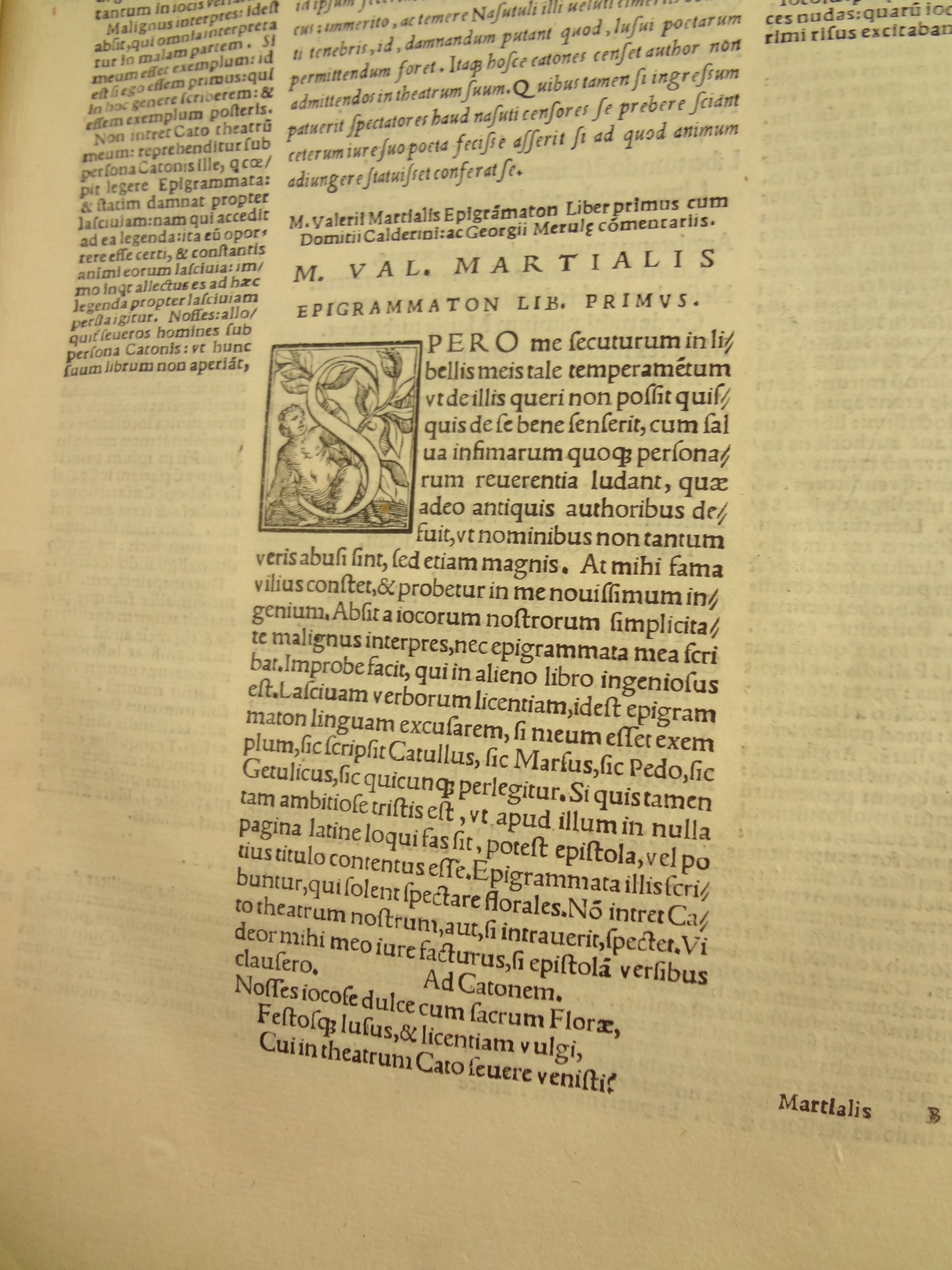 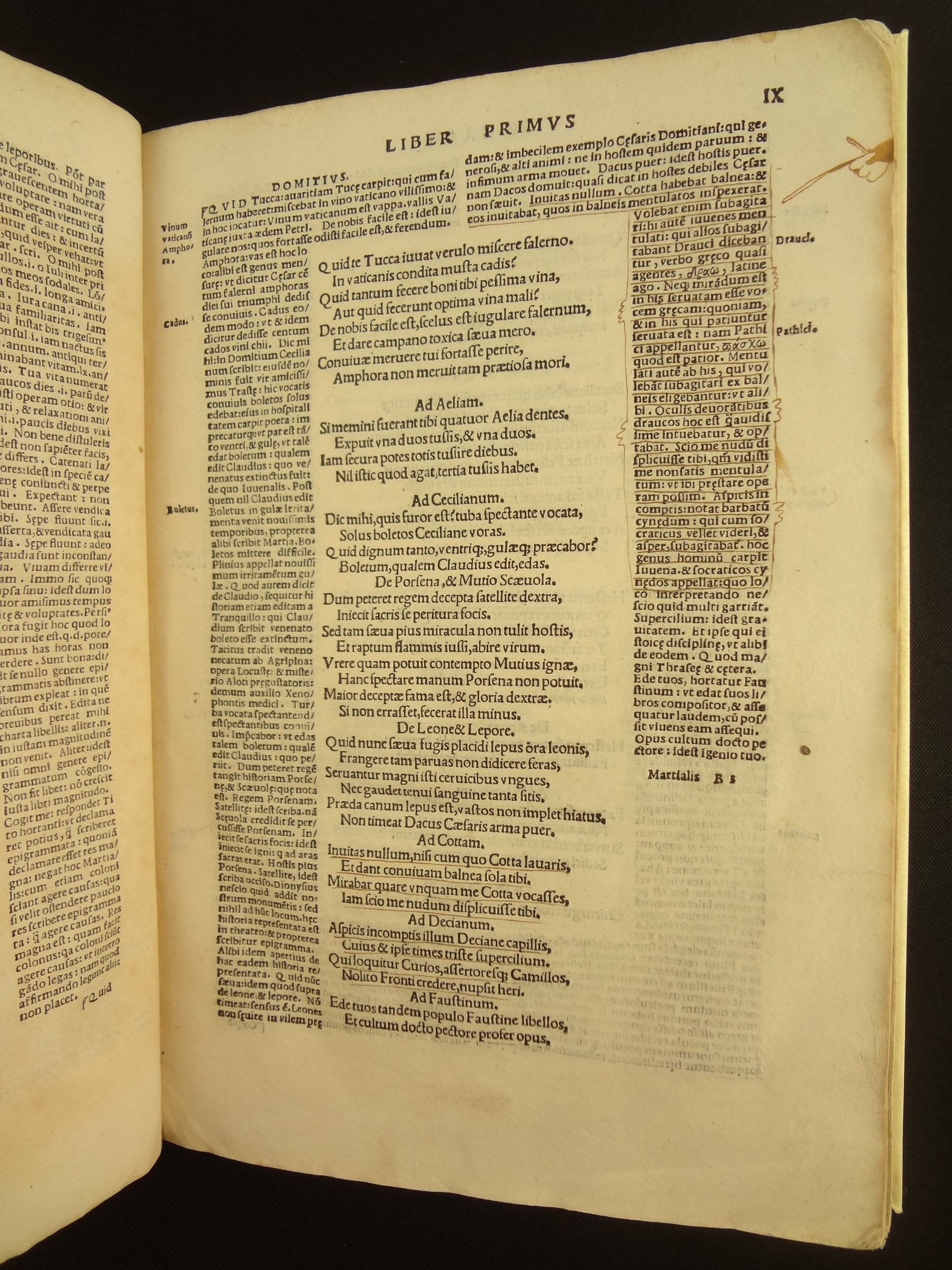 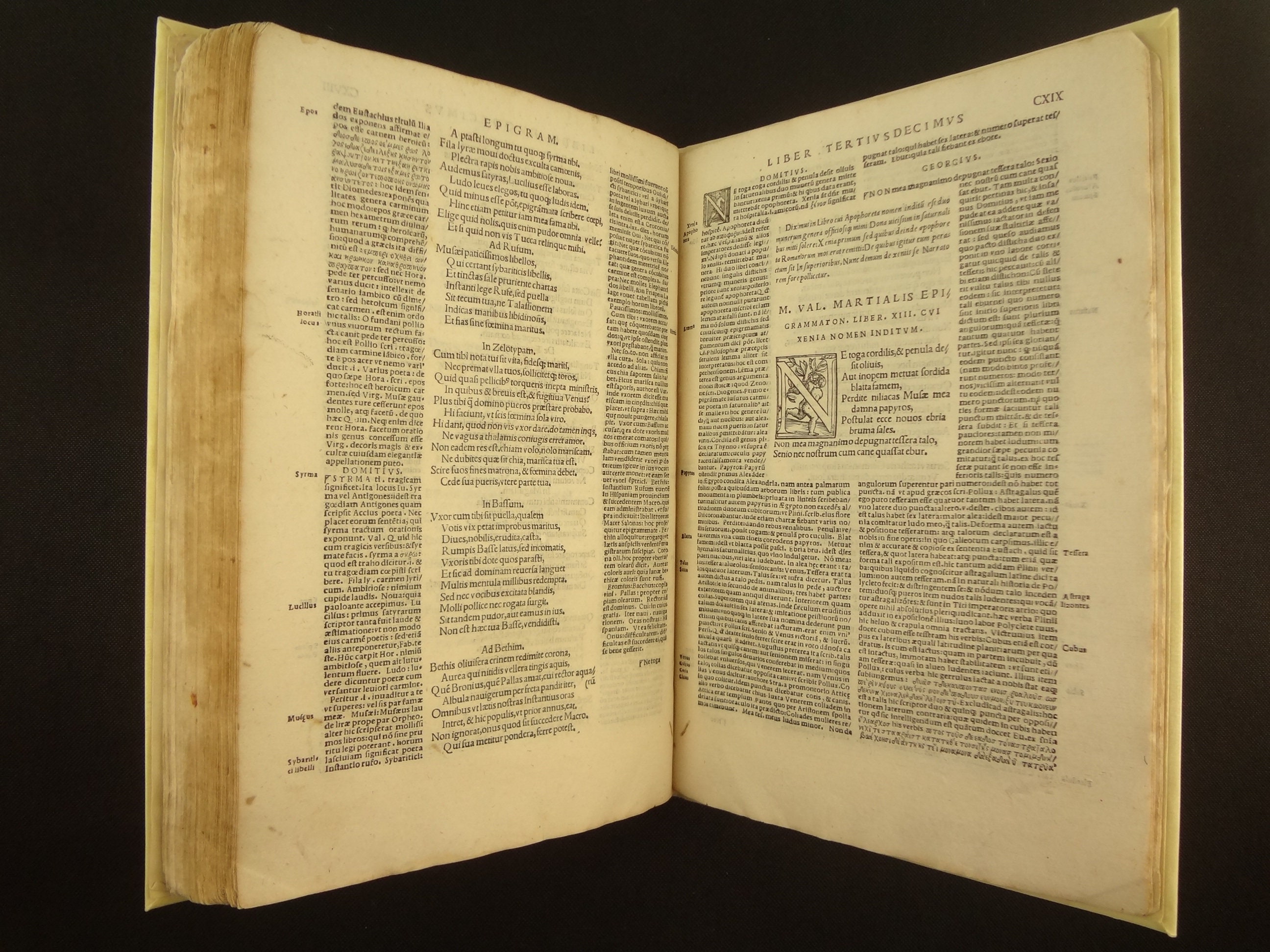 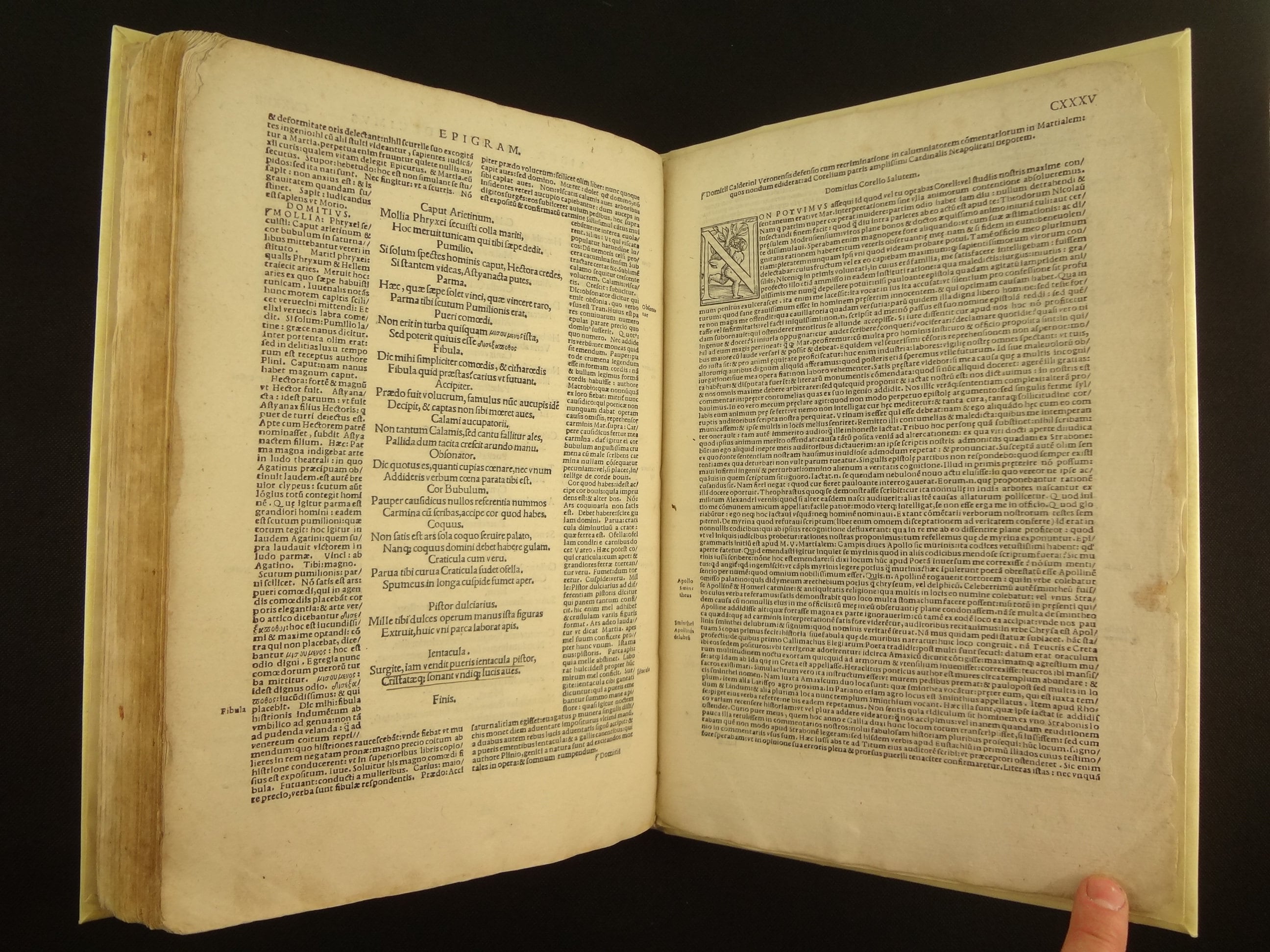 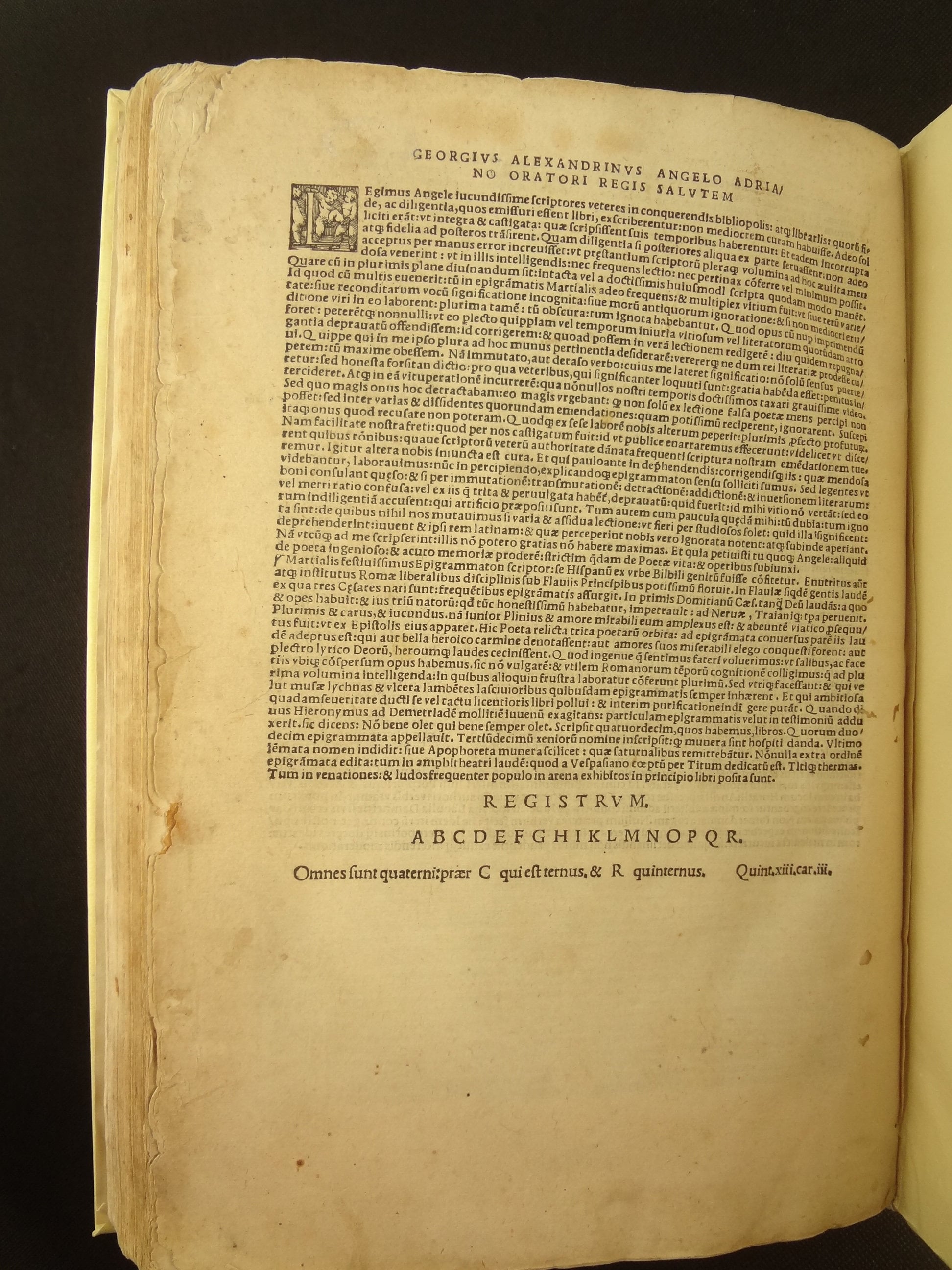 A later edition of the folio Venetian printings of Martial's Epigrammaton, with the commentary of both Domizio Calderino and Giorgio Merula.

Also, testifying of the historicity of this edition, the title is written in manuscript on the bottom edge; a remnant from when books weren't stored with their spines outwards. It also testifies that the book hasn't been heavily trimmed in rebinding. And, on the title page, the 16th century name "Camilli" is inscribed. Within the work you'll find manicules pointing to several sections, an early method of drawing attention to important passages not largely used since the 16th century.

While the printing, and signs of use, speak to the 16th century, the binding is fresh and attractive, ready to serve many future generations.

About the Epigrammaton
An epigram is a brief, interesting, memorable, and sometimes surprising or satirical statement.

Marcus Valerius Martialis (circa 50-100 AD), was a Roman poet from Hispania (the Iberian Peninsula) best known for his twelve books of Epigrams, published in Rome between AD 86 and 103, during the reigns of the emperors Domitian, Nerva and Trajan. In these short, witty poems he cheerfully satirizes city life and the scandalous activities of his acquaintances, and romanticizes his provincial upbringing. He wrote a total of 1,561, of which 1,235 are in elegiac couplets. He is considered to be the creator of the modern epigram.

Martial's keen curiosity and power of observation are manifested in his epigrams. The enduring literary interest of Martial's epigrams arises as much from their literary quality as from the colorful references to human life that they contain. Martial's epigrams bring to life the spectacle and brutality of daily life in imperial Rome, with which he was intimately connected.


From Martial, for example, we have a glimpse of living conditions in the city of Rome:

I live in a little cell, with a window that won't even close,

In which Boreas himself would not want to live.

Martial also pours scorn on the doctors of his day:

I felt a little ill and called Dr. Symmachus.

Well, you came, Symmachus, but you brought 100 medical students with you.

One hundred ice-cold hands poked and jabbed me.

I didn't have a fever, Symmachus, when I called you –but now I do.

Calderini and Merula were both late 15th century scholars. Merula is well-known for being the editor of the editio princeps of Plautus and Cato, among others (possibly Martial, in 1471). Calderini was a professor in Rome who published commentaries on many Roman authors (Virgil, Juvenal, Propertius, etc.).

This edition printed by Octavian Scotus the second (CERL record cni00021743). His printer's mark is described as, "Woman climbs a pomegranate tree to reap the fruits which she throws to another woman sitting at the foot of the tree". But, it's the same layout and type of the earlier Fontaneto edition of 1521. The Scotto family is noted for their many musical printings, and is counted among one of the more important printing families of 16th century Venice. For some interesting tidbits on Fontaneto, read From Printshop to Piazza... by Rosa Salzberg; Fontaneto was also a key printer of Venice. This edition certainly descends from well-regarded printers.

While Martial was printed often in the 16th century, folio Venetian editions with the commentary of Calderino and Merula are among the better editions.

Pages - (2), CXXXVI (missing blank last leaf). There is no XII; an error in pagination exists, it is not missing. This is noted in the references.

Text and commentaries begin on verso of leaf III.

Despite notes, a handsome book that shows the wear of centuries well.