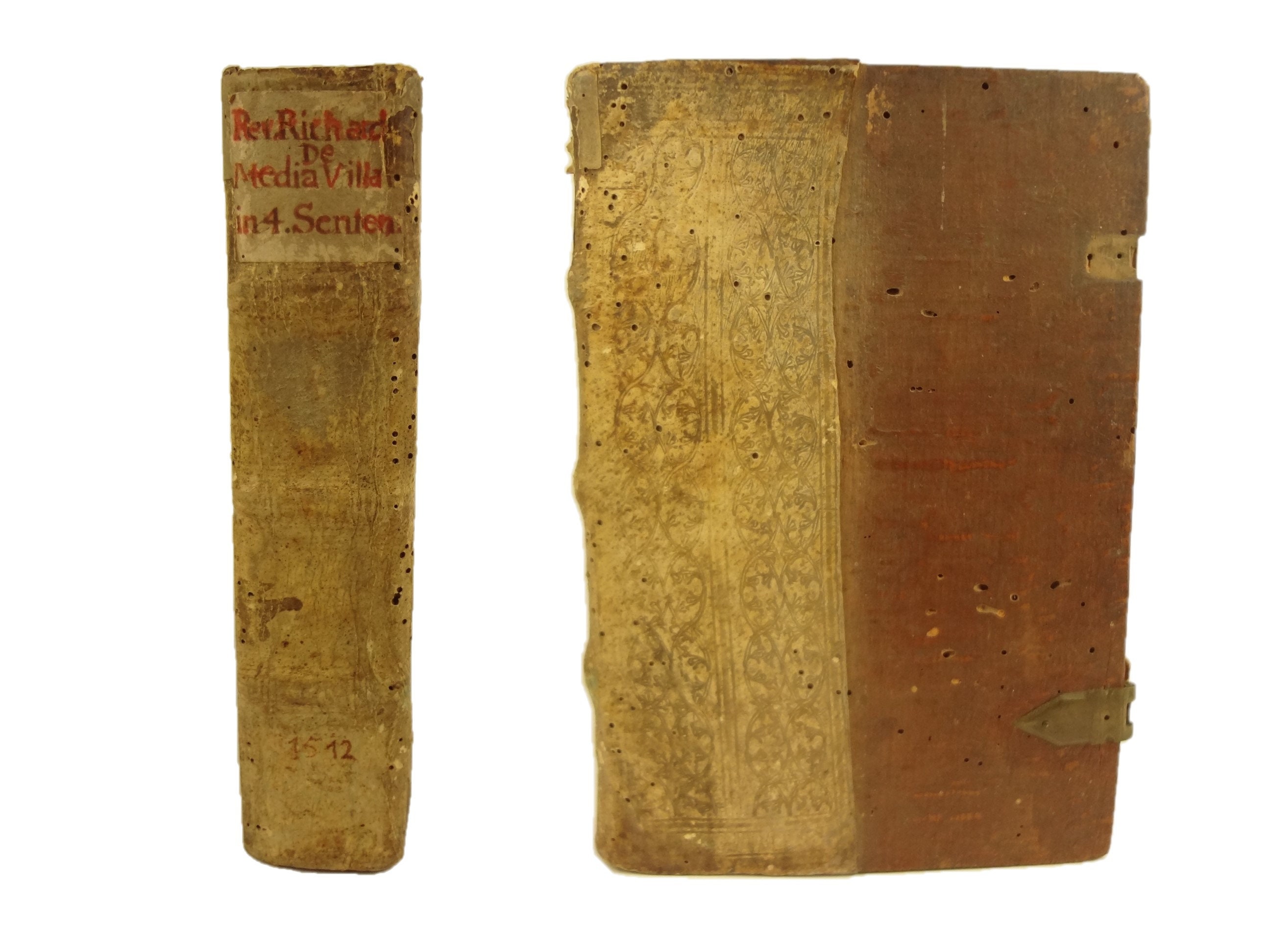 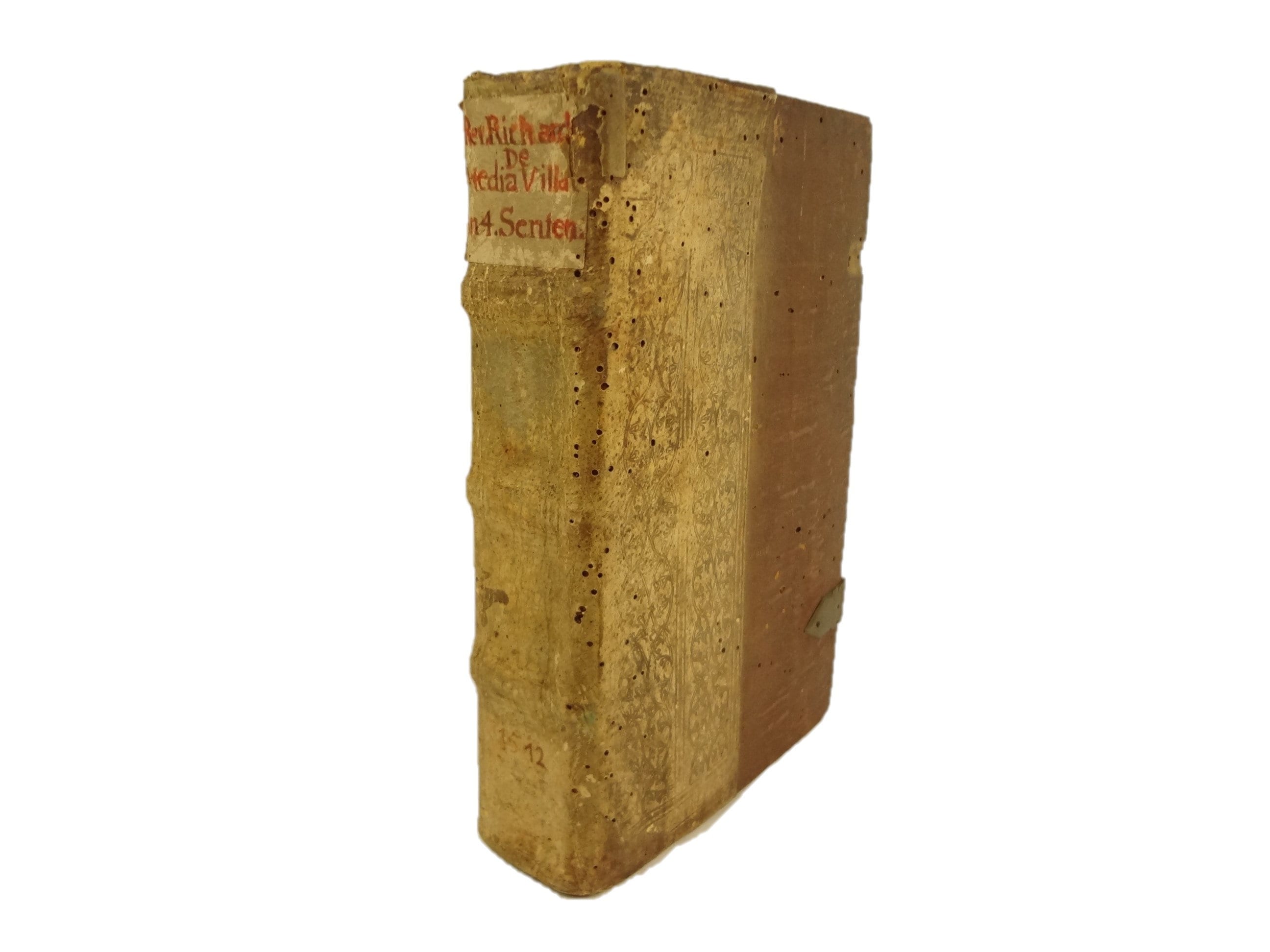 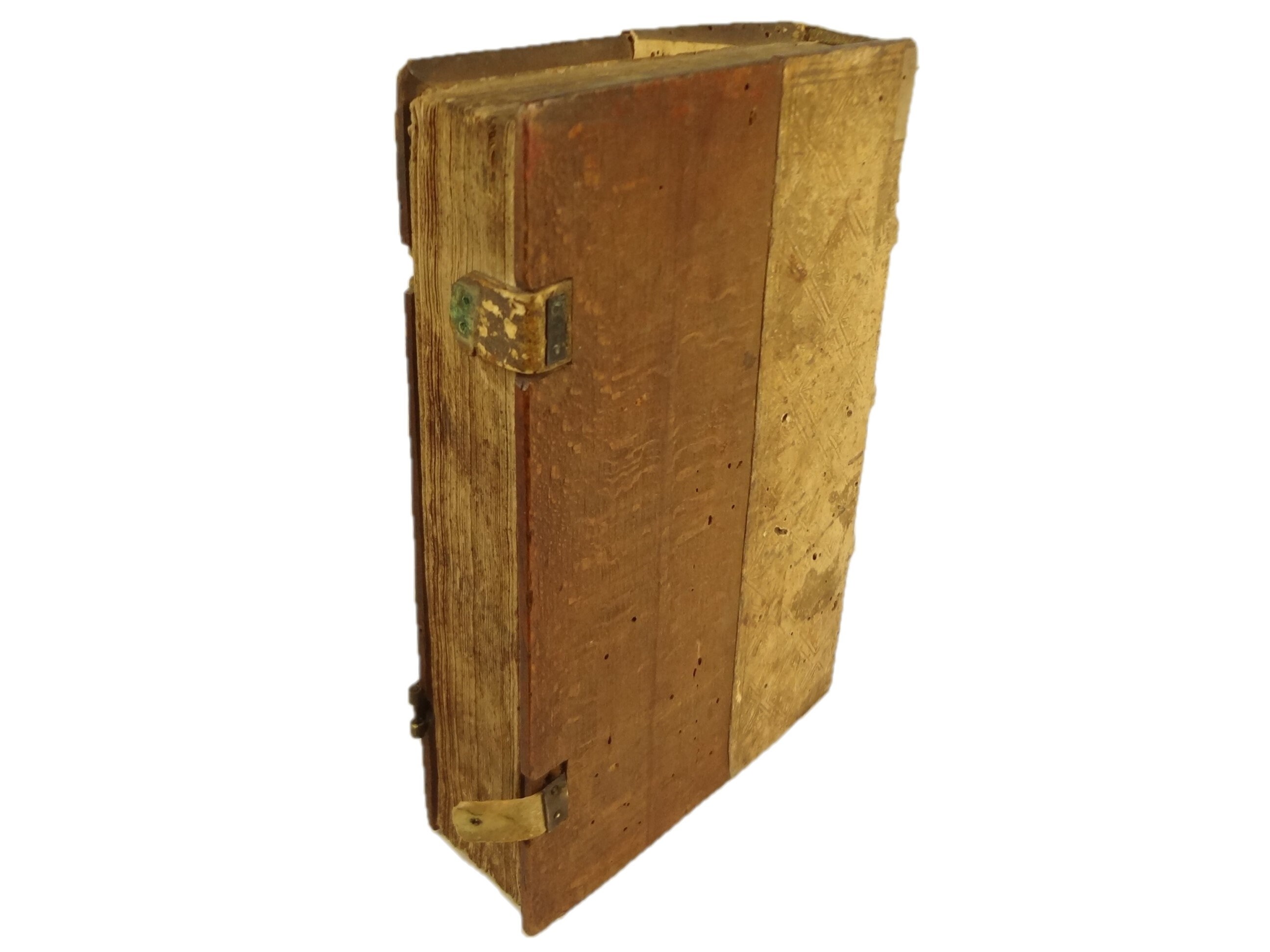 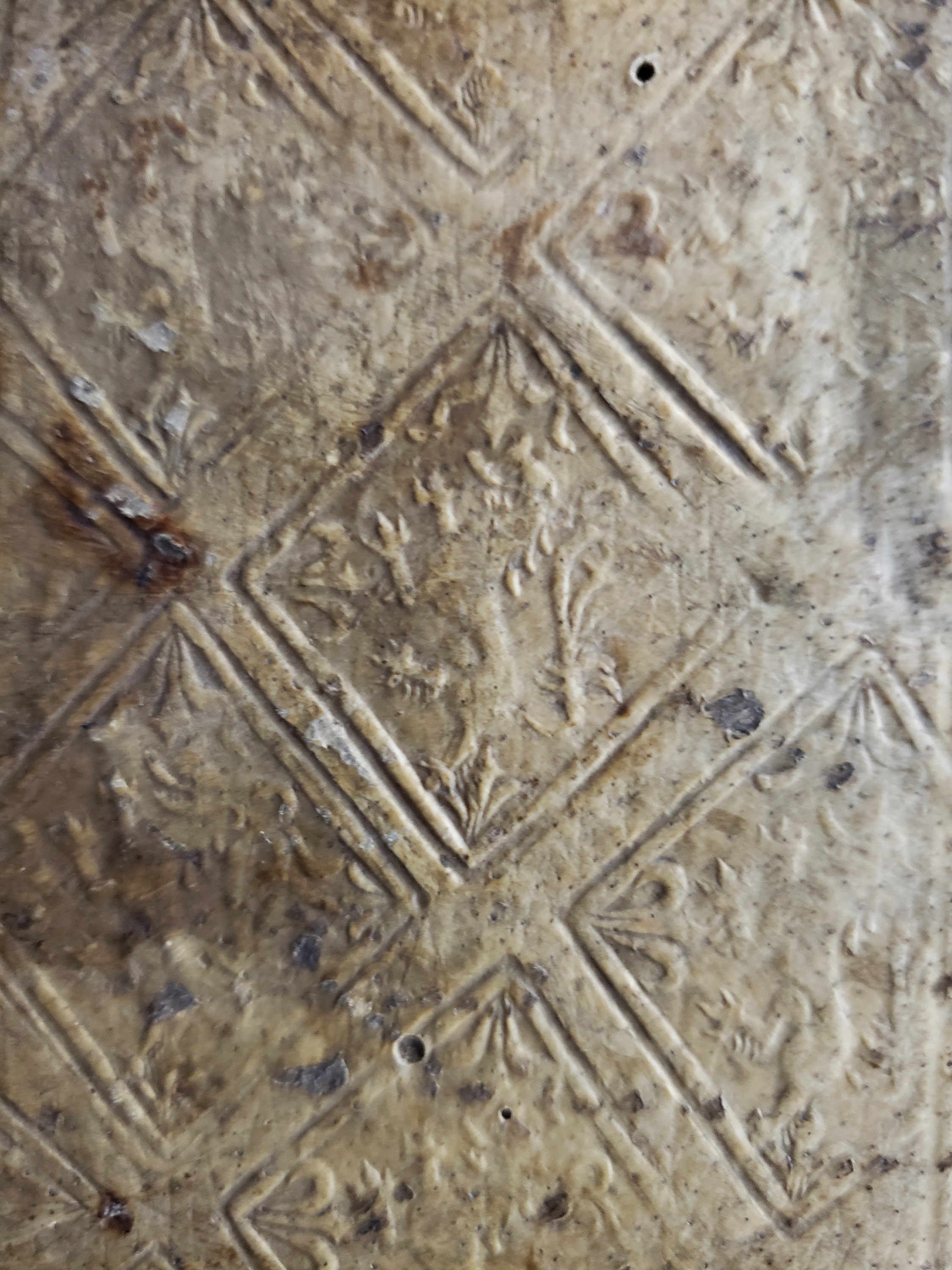 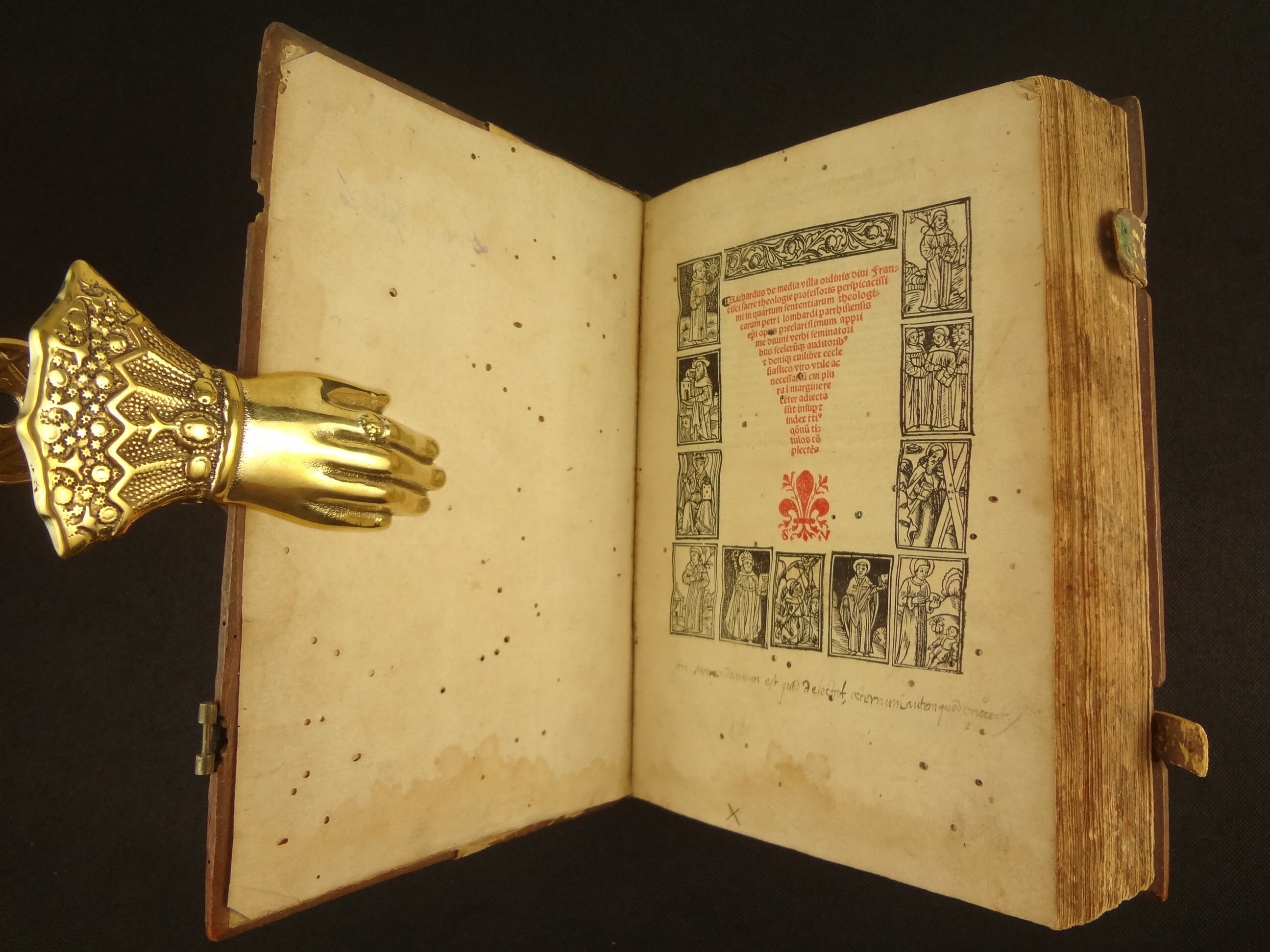 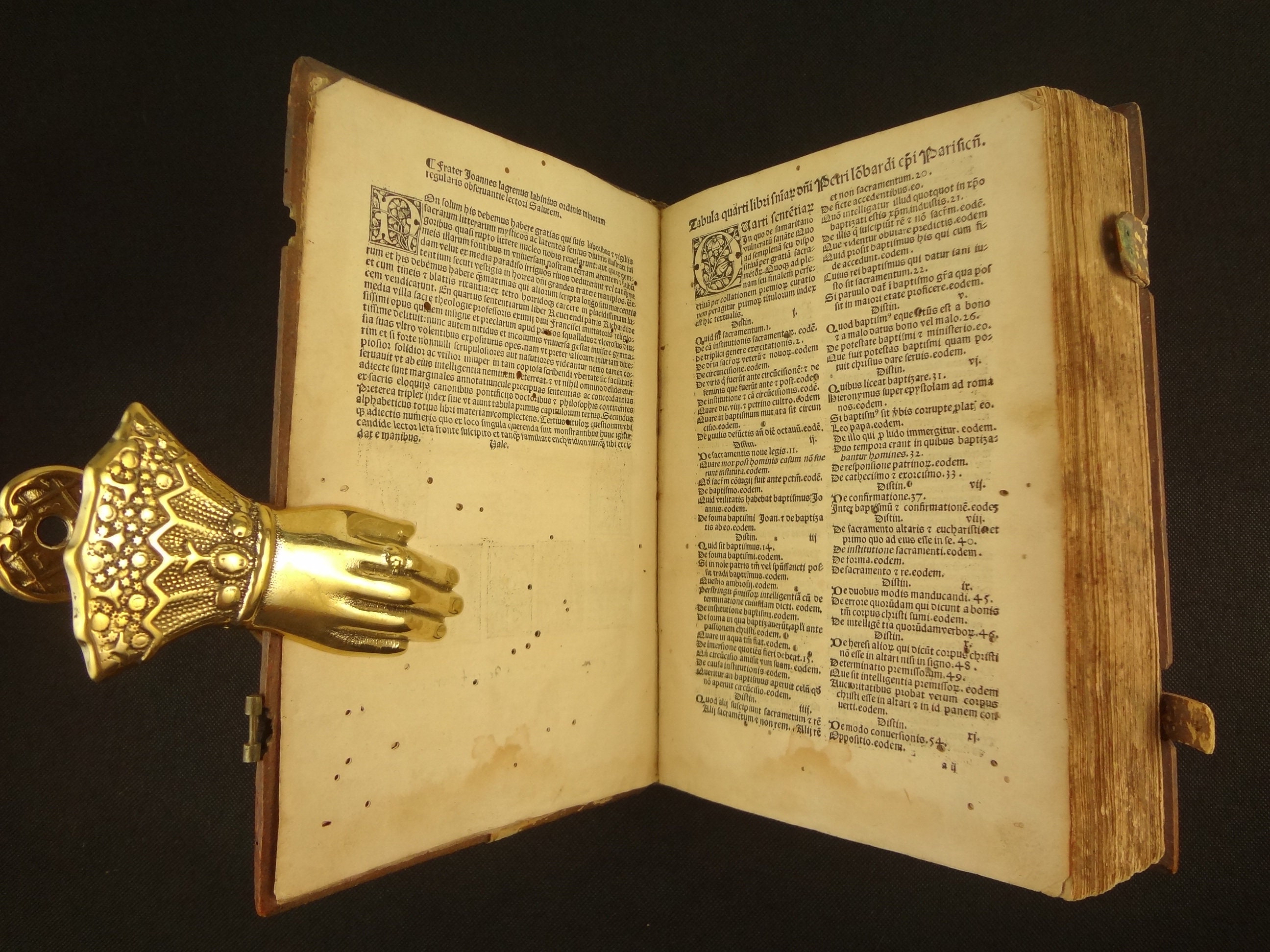 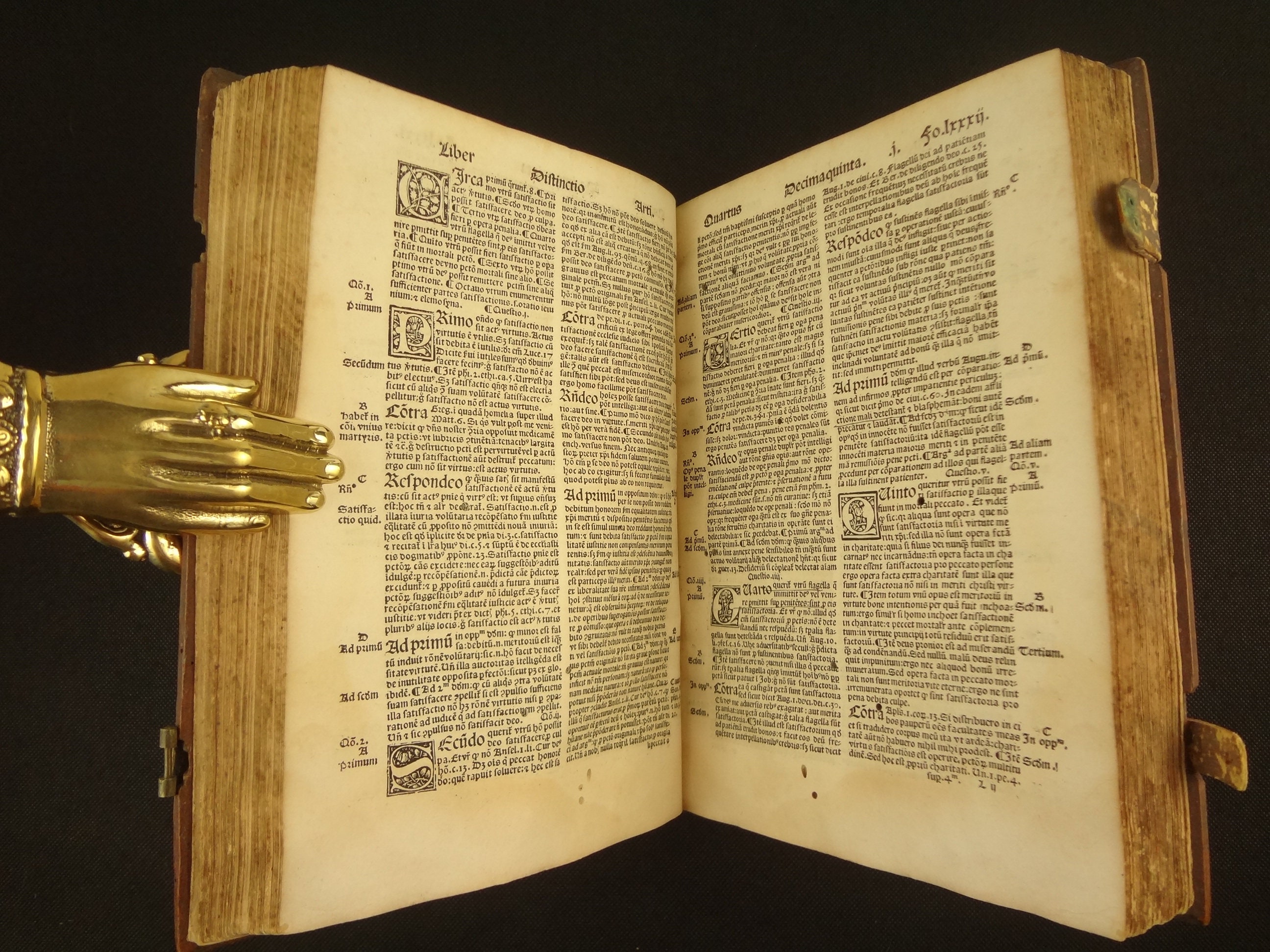 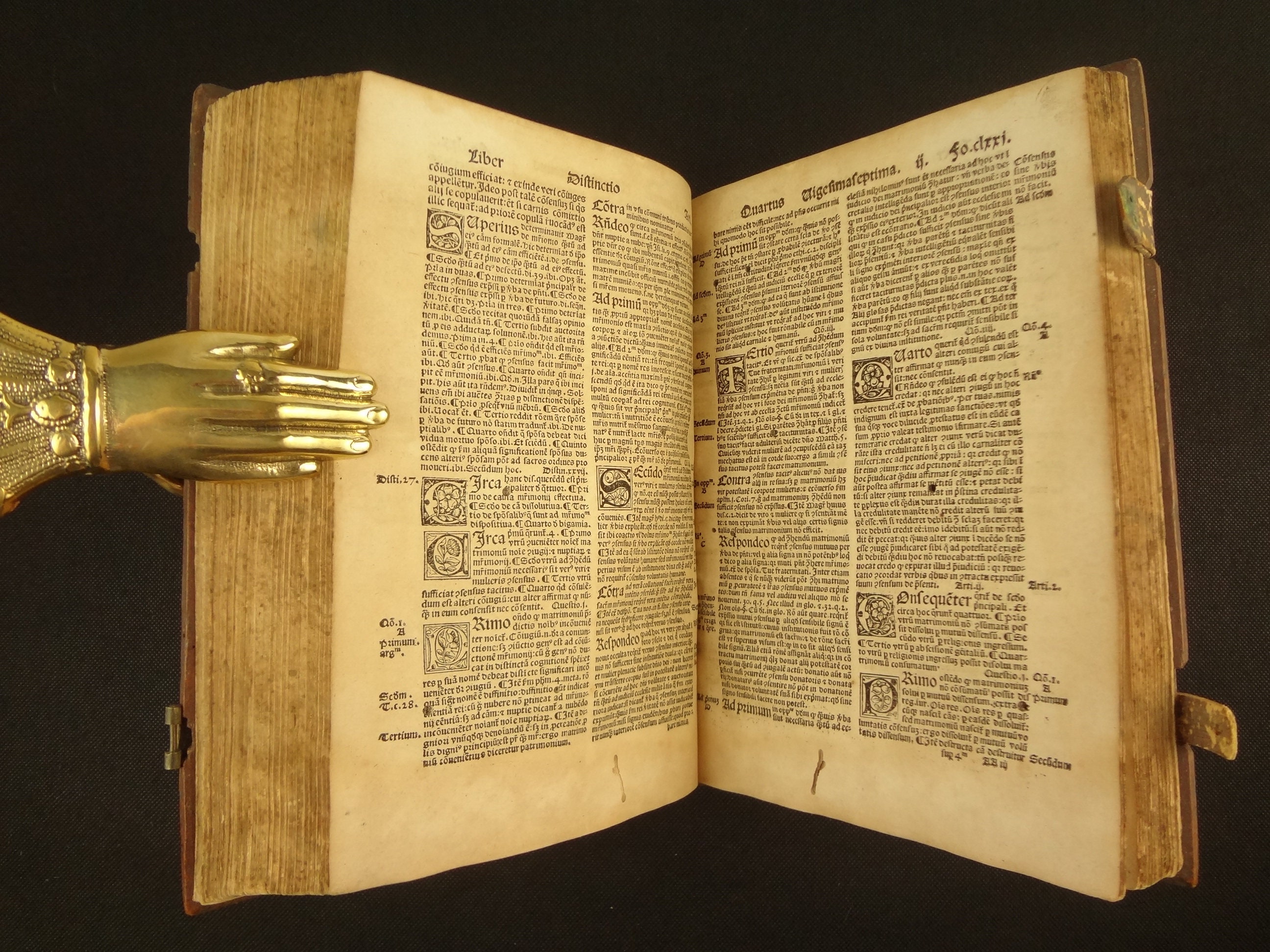 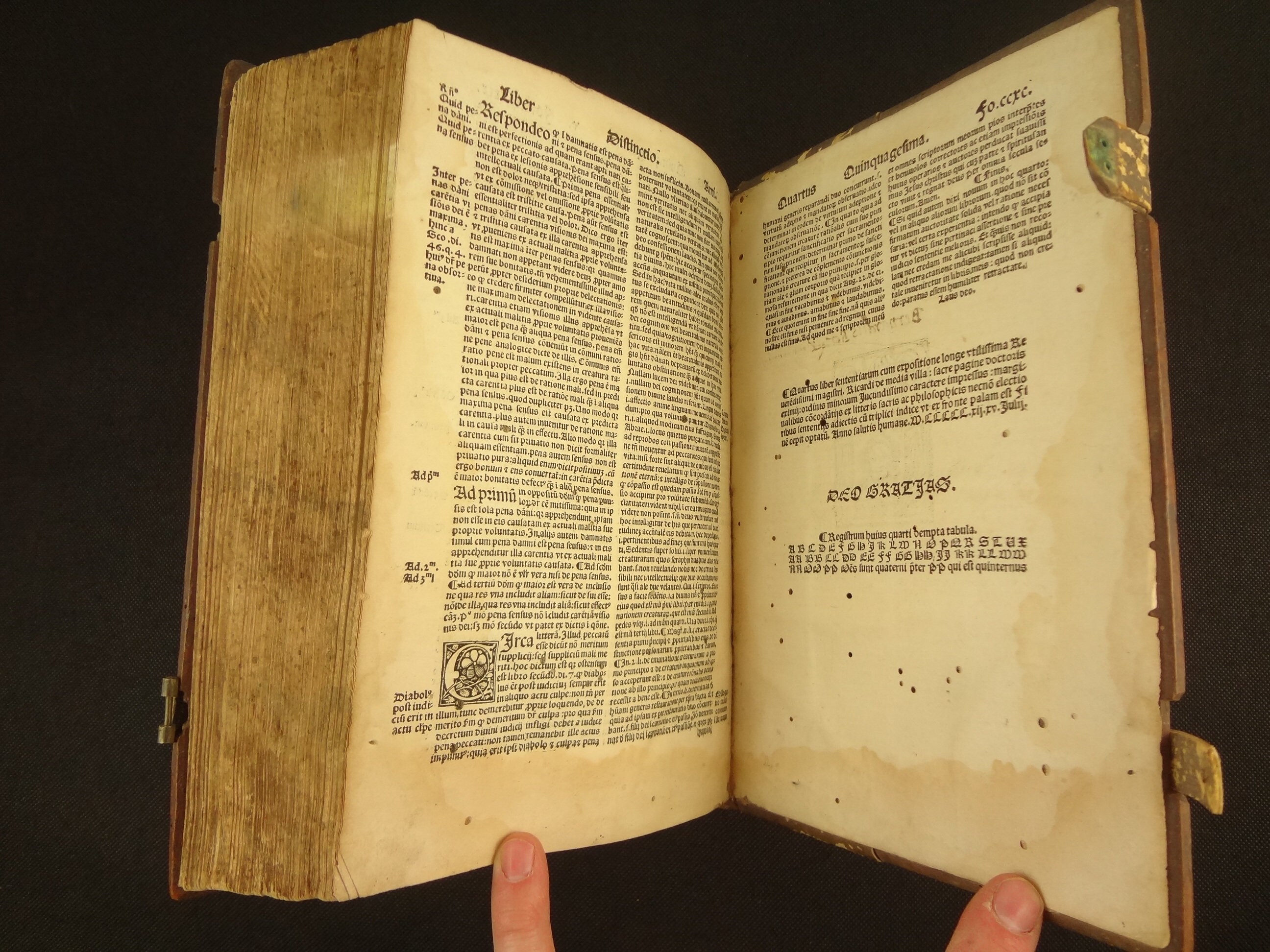 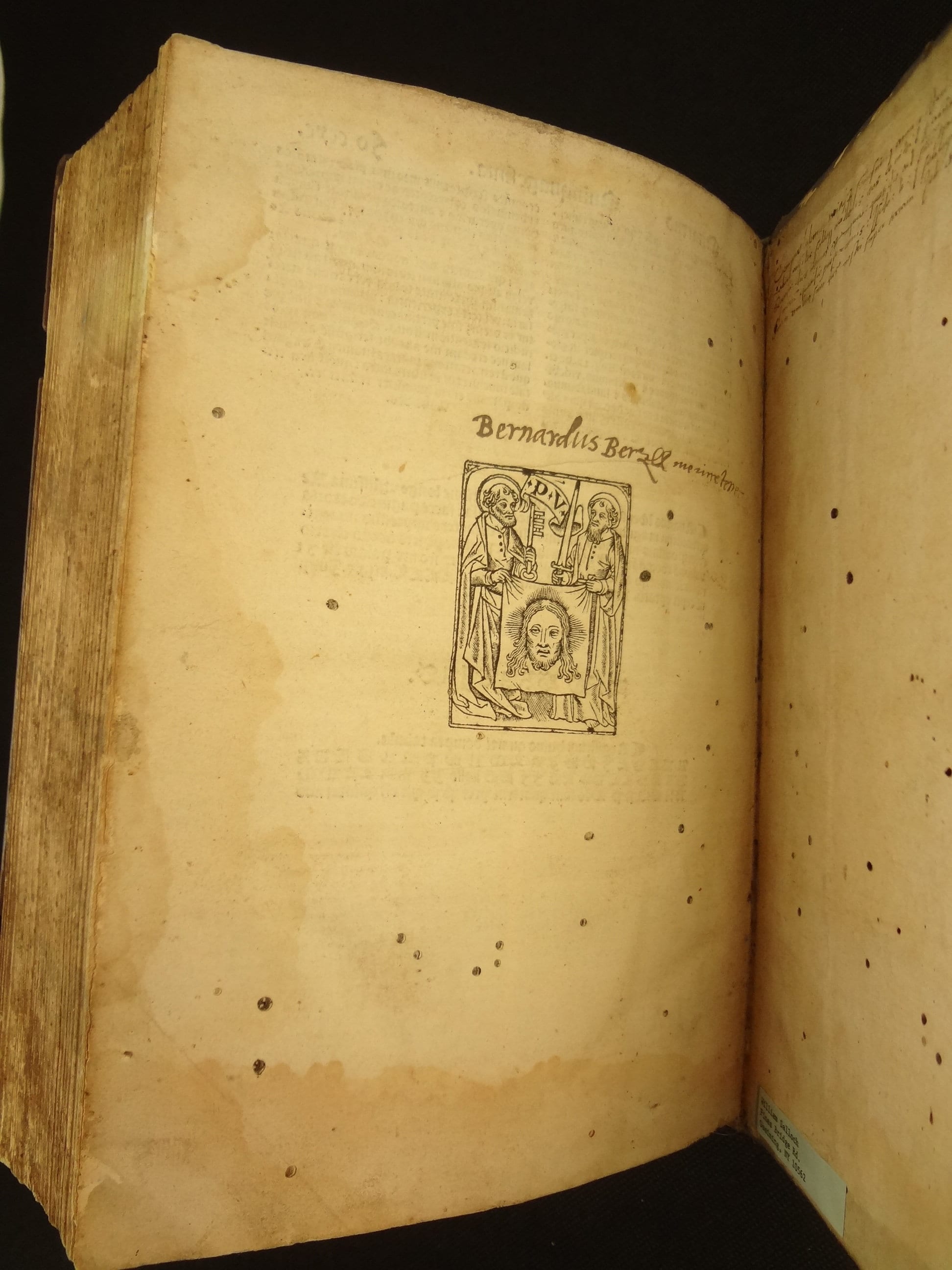 Printed by the well-regarded Jacques Mareschal, for Simon Vincent, with illustrations of the saint's surrounding the title page and, at the rear, Vincent's printer's mark of St. Peter (holding a key) and St. Paul (holding the Sword of Truth) and stretching the veil of St. Veronica between them.

In consideration of the work, printing date and contemporary binding, this book speaks more to the medieval period than almost any I've offered.

Richard of Middleton (c. 1249 – c. 1308) was a member of the Franciscan Order, a theologian, and scholastic philosopher. His extant theological output is mainly contained in his two commentaries on the Sentences of Peter Lombard, which he edited between 1285 and 1295, three sets of Quodlibetal Disputations and some 45 disputed questions. His work is heavily influenced by his predecessors at Paris, including Bonaventure, Henry of Ghent and Thomas Aquinas.

This is Mediavilla's commentary on Peter Lombard's fourth book of Sentences. Peter Lombard's Four Books of Sentences formed the framework upon which four centuries of scholastic interpretation of Christian dogma was based; rather than a dialectical work itself, the Four Books of Sentences is a compilation of biblical texts, together with relevant passages from the Church Fathers and many medieval thinkers, on virtually the entire field of Christian theology as it was understood at the time. The fourth book focused on the sacraments in general, the seven sacraments in particular, and the four last things, death, judgment, hell, and heaven. The "Book of Sentences" was written about 1150. Mediavilla's commentary was written about 1285.

Jacques Mareschal (CERL 01333182) was active in Lyon from 1509 to 1529. Simon Vincent (CERL 01333501) was active in Lyon from 1499-1532, acting also as a bookseller. Their printer's mark depicts the Veil of Veronica, which was said to have wiped Jesus' face as he made his way to the cross; the veil's first record appears circa the 10th century, and by the 16th century it was a venerated relic. St. Peter's Basilica keeps Veronica's veil, although it is rumored to have heavily faded and it is questioned whether any image is still retained.

The ticket of William Salloch is found at the inside bottom of the rear board, an antiquarian bookseller in New York in the mid-20th century. CERL describes Salloch's work as "an impressive career in the rare book trade". Princeton notes that their copy also came from Salloch (Princeton call number BX1749.P4 R5 1512). The title page has an inscription stating, "Momentaneum quod delectat, aeternum quod cruciat", an Augustinian quote meaning, "The pleasure is momentary, the torture eternal".

In consideration of the work (being a Franciscan commentary), the binding style, the Augustine quote on the title page, the use of the name "Bernardus" (relating to St. Bernard) on the colophon leaf and the Job quote on the rear pastedown, it seems likely that this book hails from an ecclesiastical setting.

The Universal Short Title Catalogue lists one copy in Belgium, two in France, four in Oxford, and three others in the U.K.. If you dig through the eleven separate entries in OCLC (why do librarians do this?!) it appears there are several copies in Germany, one in Edinburgh, one at Stanford and one at Princeton.

Contemporary binding in the style of the monastery binderies of the period; pigskin spine, impressed in blind with decoration, holding beveled wooden boards.

While I couldn't find an exact match for the rampant lion tool on the rear board, the Einbanddatenbank (EDNB) did record tool s025489 (ID 122615s), which is remarkably similar and is identified as being used at the workshop w003156, located in Bavaria, and recorded from 1492-1499.

There are many similarly bound works from the period, but an easy to find online copy is the University of Glasgow's 1475 Thomas Aquinas De Veritate; also, Glasgow's 1473 Petrus Lombardus Glossa in Epistolas Pauli has a similar lion in a rhombus tooled on the front board.

Measures approx. 23 x 15.5 x 5 cm, quarto signed (mostly) in eights. Alum-tawed pigskin spine, decorated in blind, with beveled wooden boards (with remains of clasps). Several paper labels on spine, the topmost with title in manuscript, and year written at base directly on spine. Title page printed in red and black, with eleven small woodcuts depicting saints; also, the printer's mark of Simon Vincent at the rear. Red fleur de lys on the title page. Initials throughout.

Pages - 34 leaves of title page and tabula, I-CCXC (with printer's mark on verso of CCXC)

See pictures. Contemporary binding with the wear of centuries. Slightly out of square, rubbed at edges, clasps incomplete, worm holes, soiling, several paper labels to spine, year written on spine and some rubbing to pigskin.

Worming throughout, more towards ends. Moisture intrusion mark, 3 cm. from bottom edge, mostly just to bottom of text, throughout. Occasional intrusion marks from other edges as well.

PP10 (blank last leaf) either used as the pastedown, or missing.

Despite the notes, it is not fragile, delightfully shows its age and is easy to thumb through.