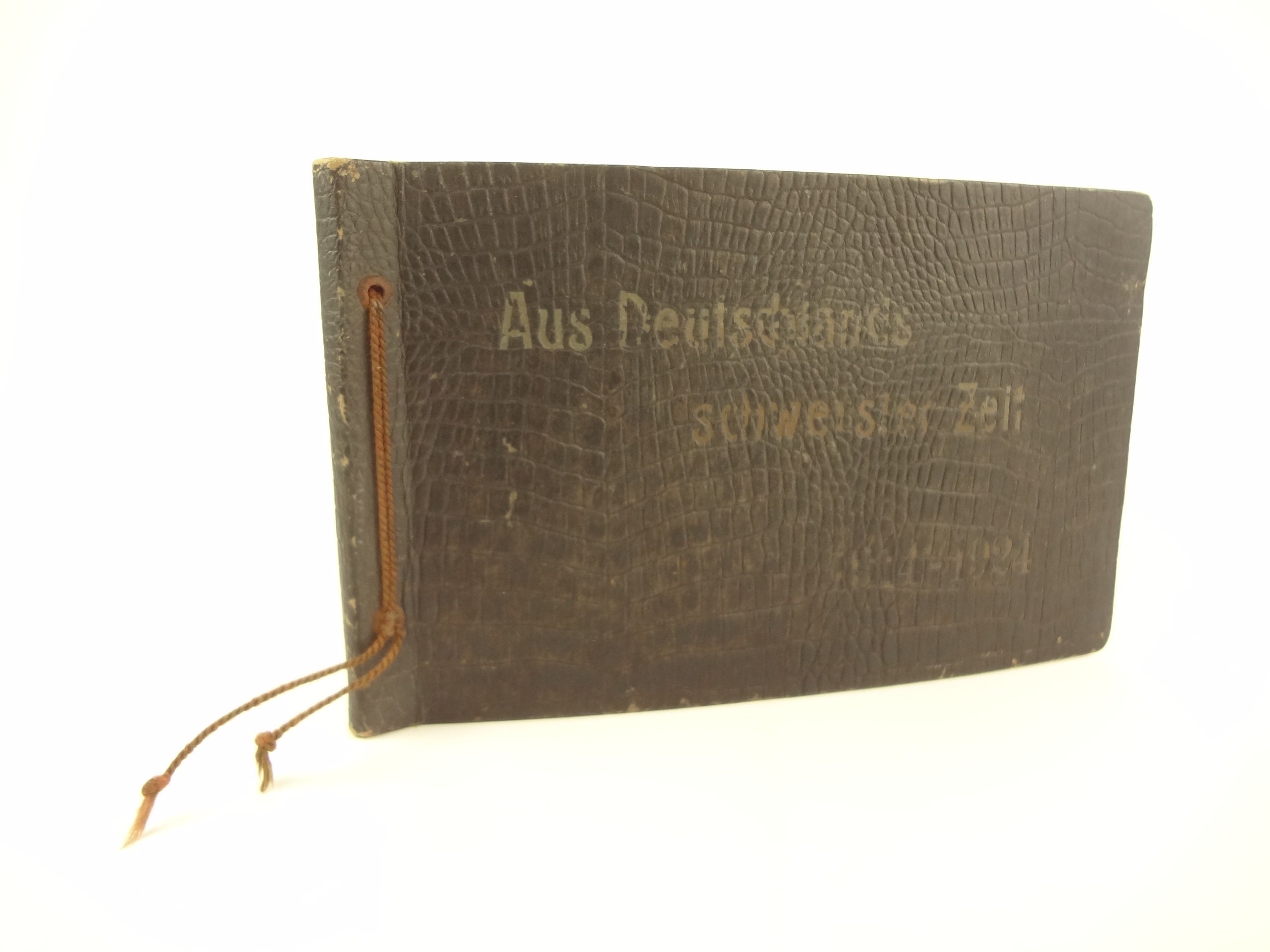 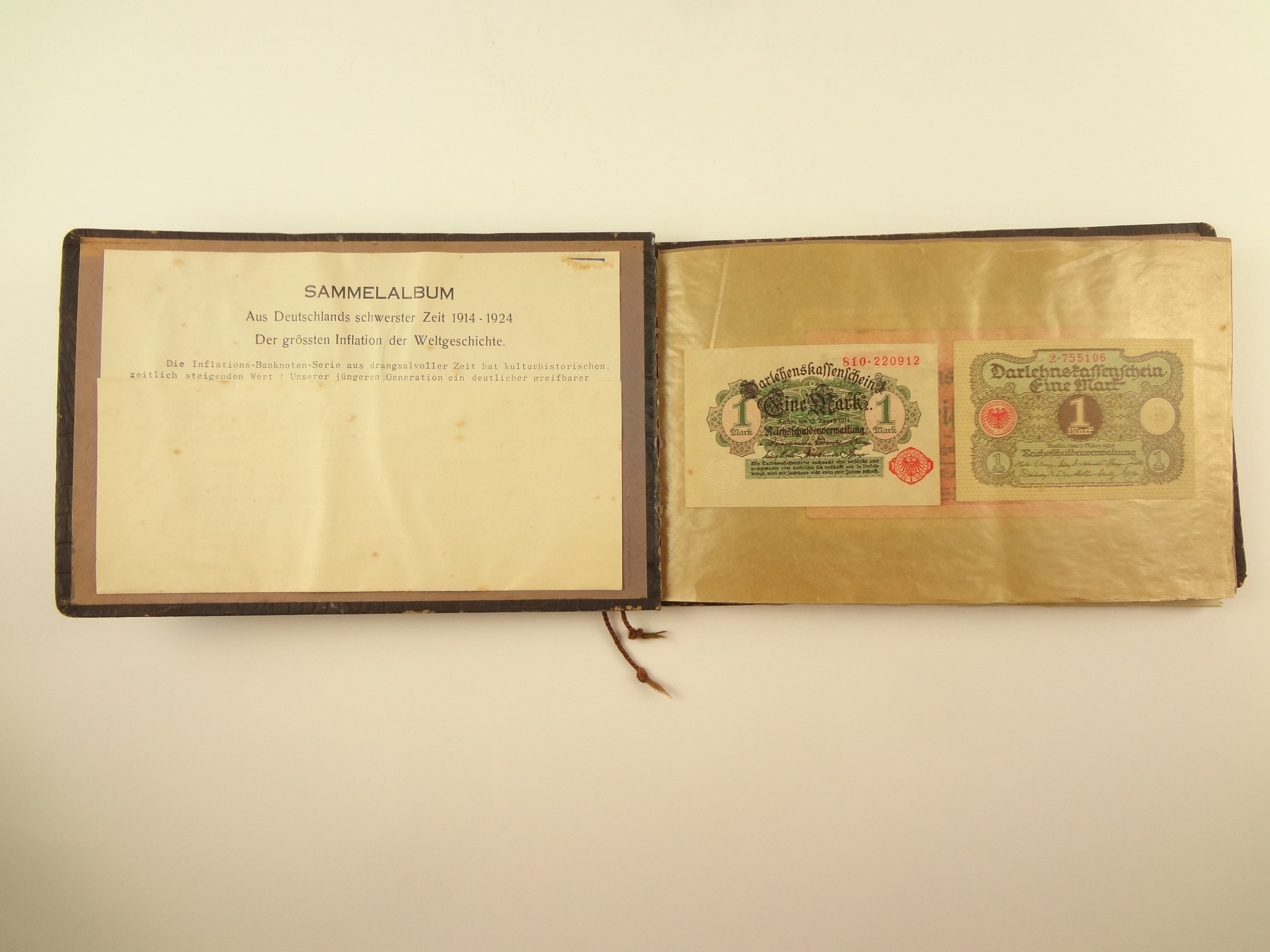 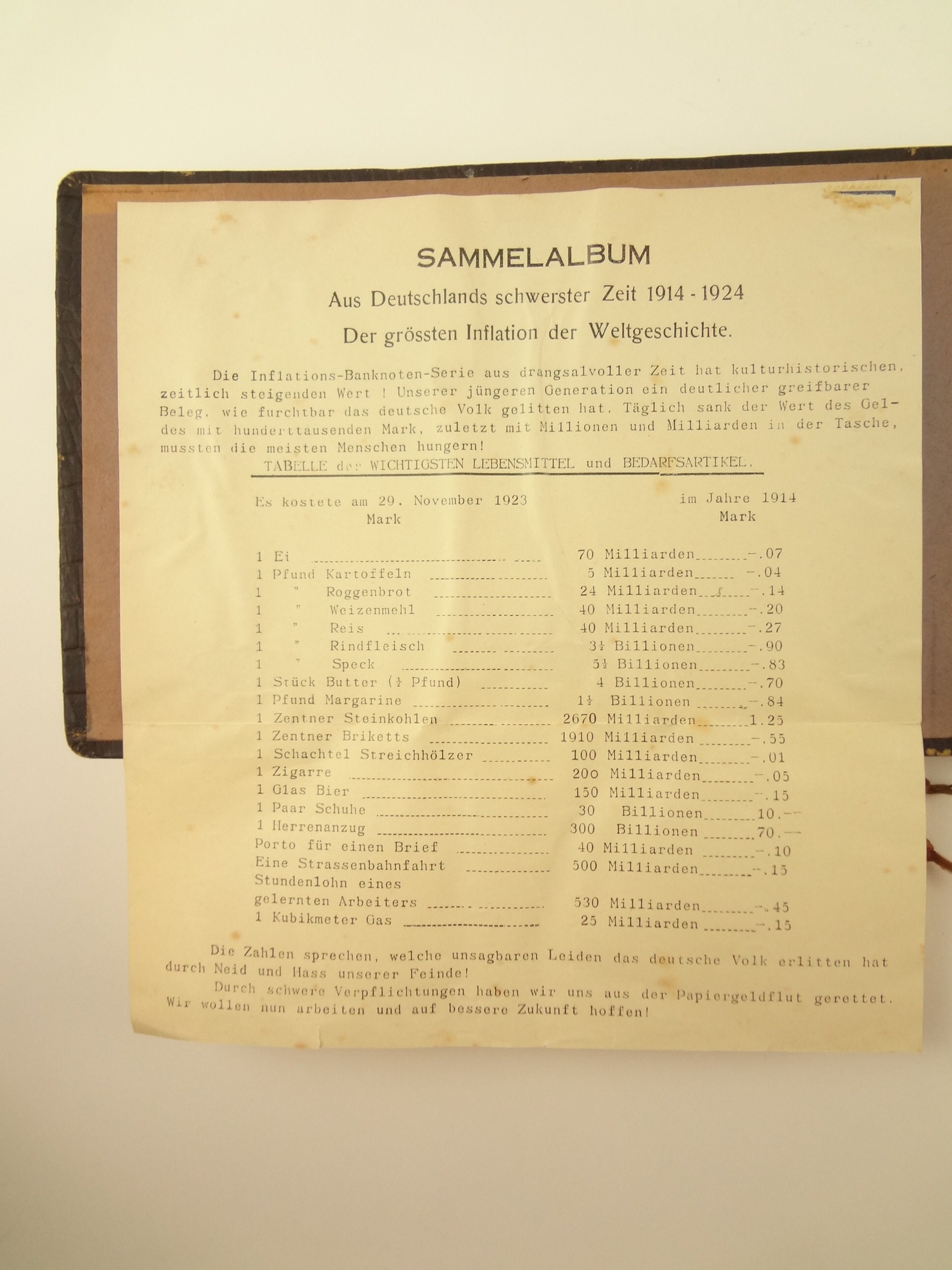 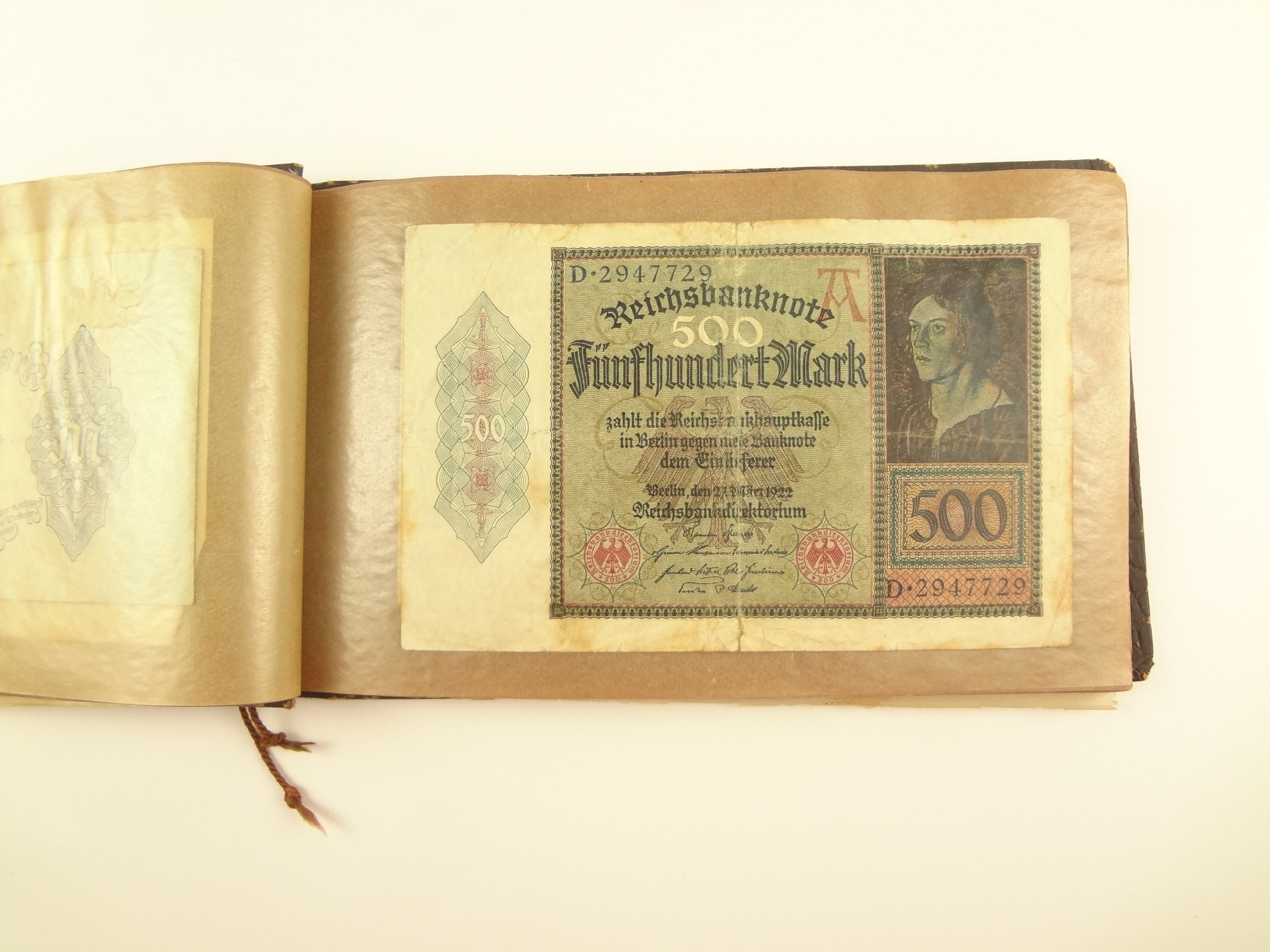 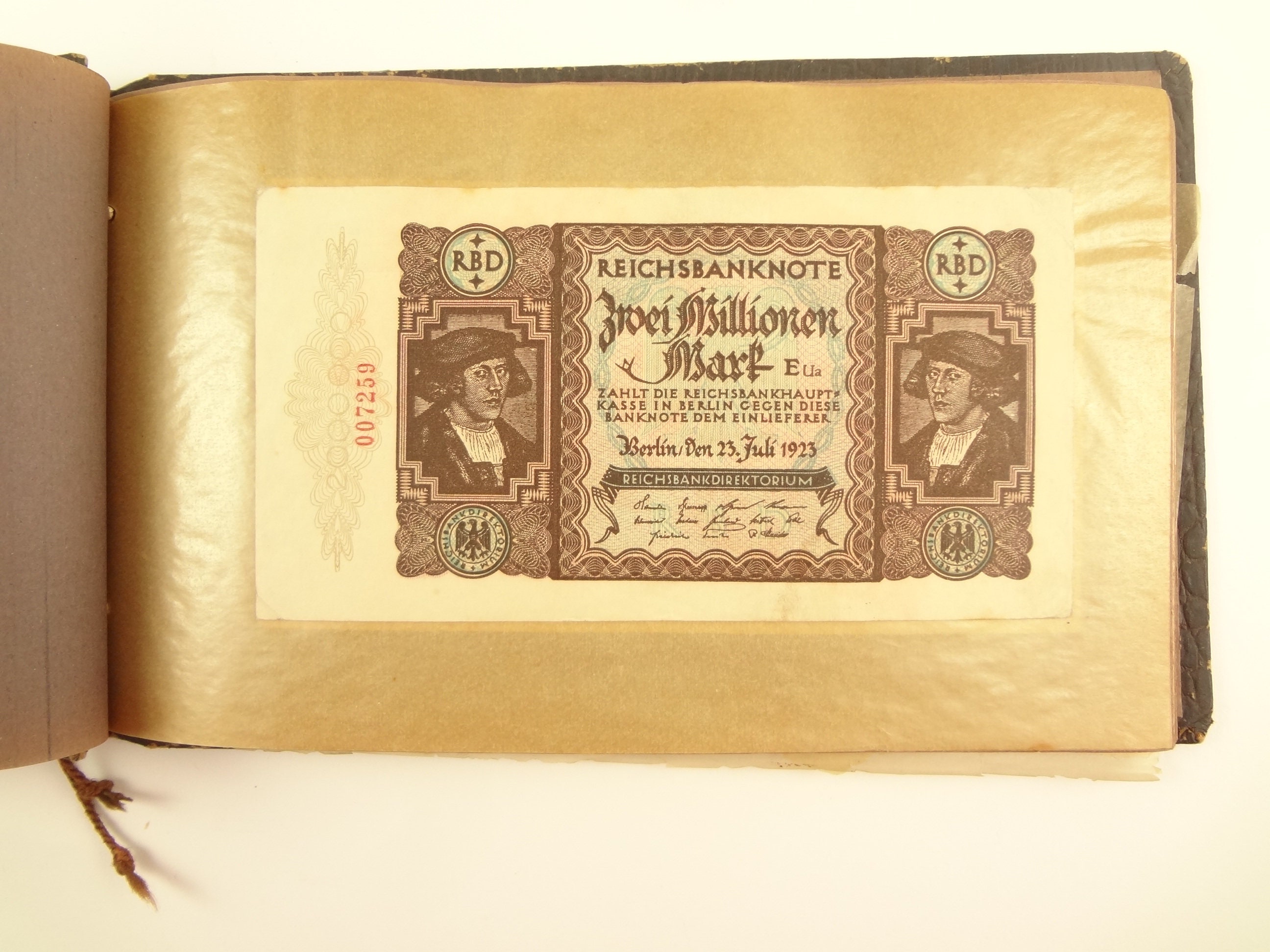 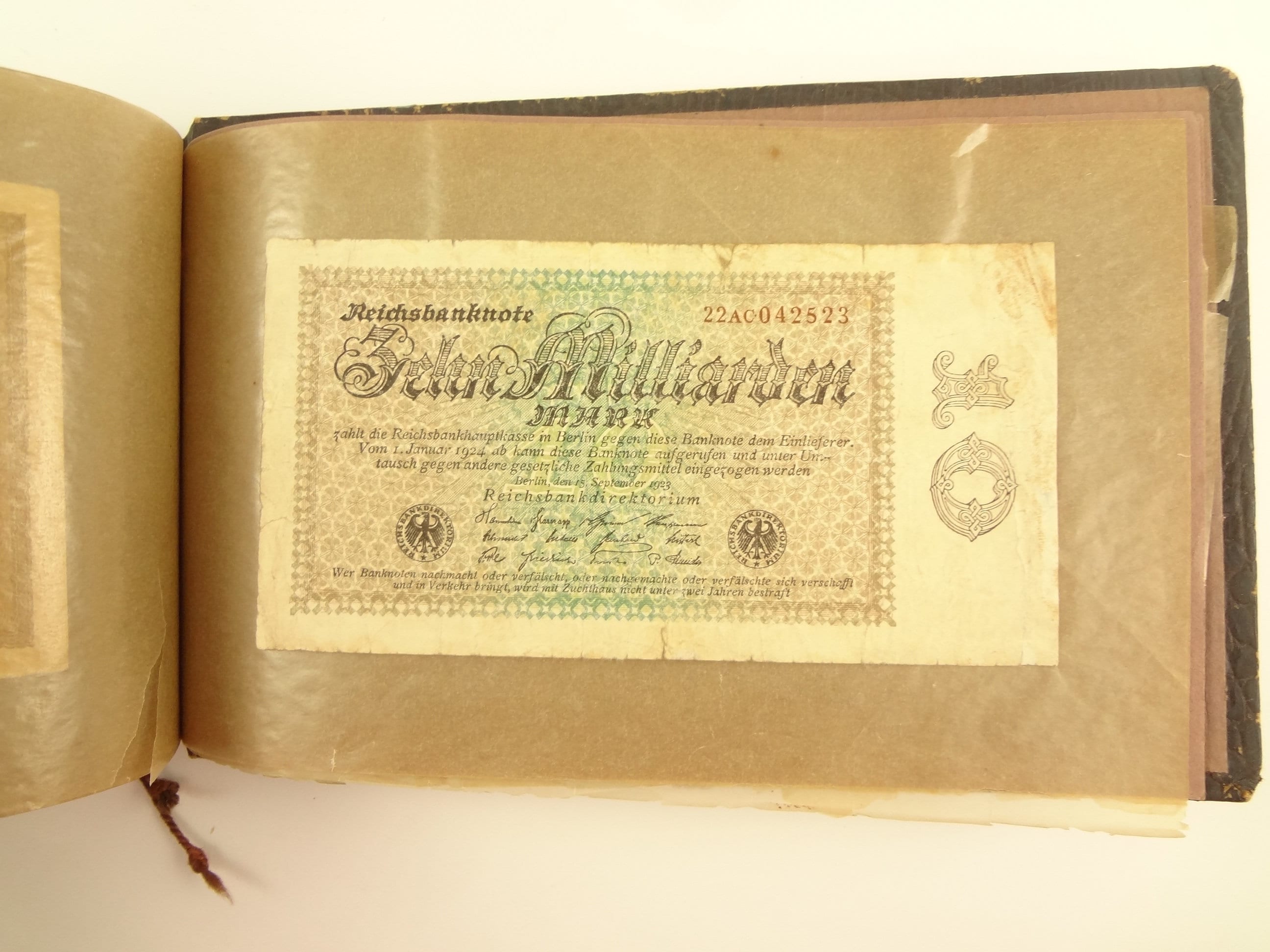 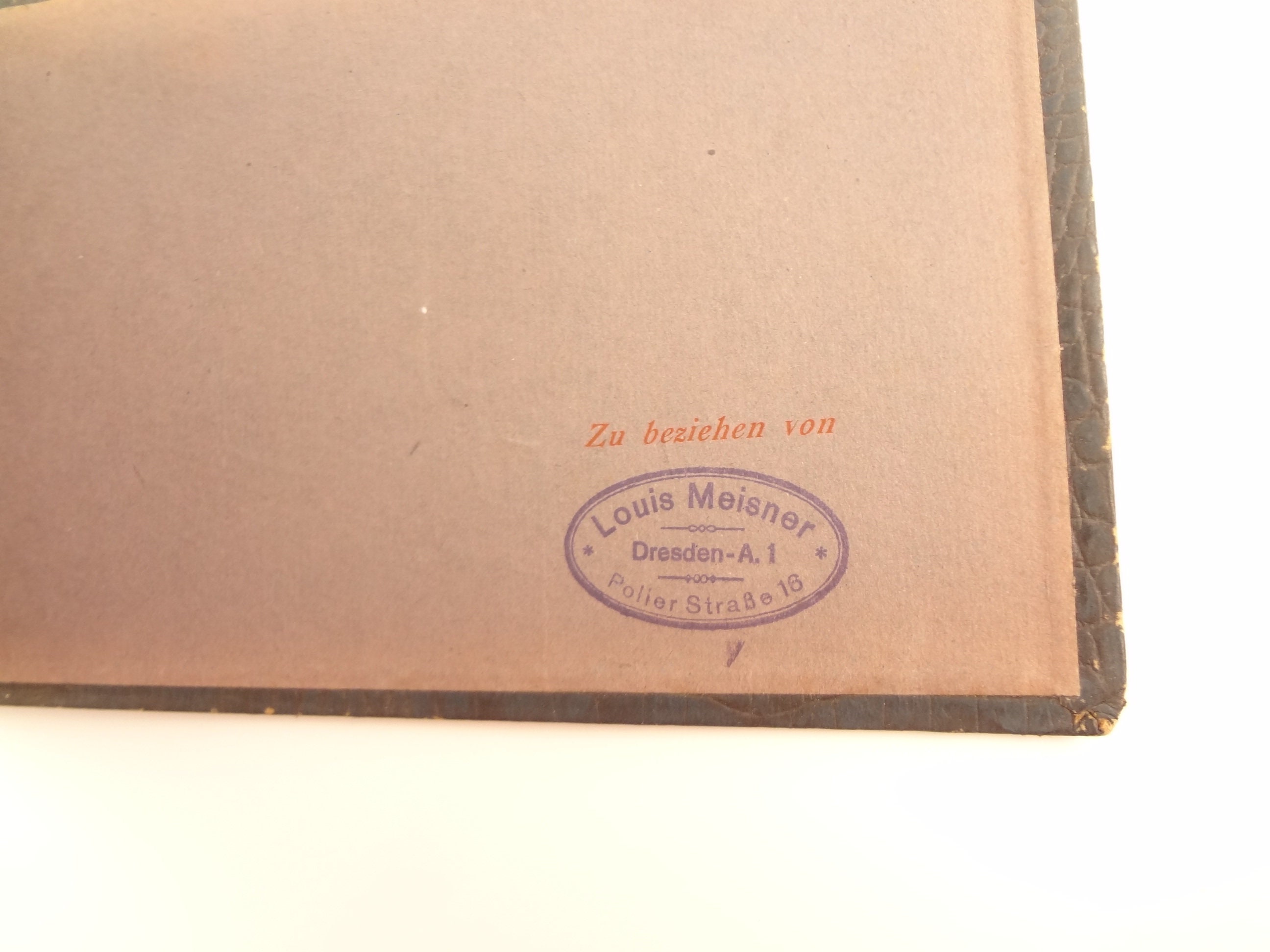 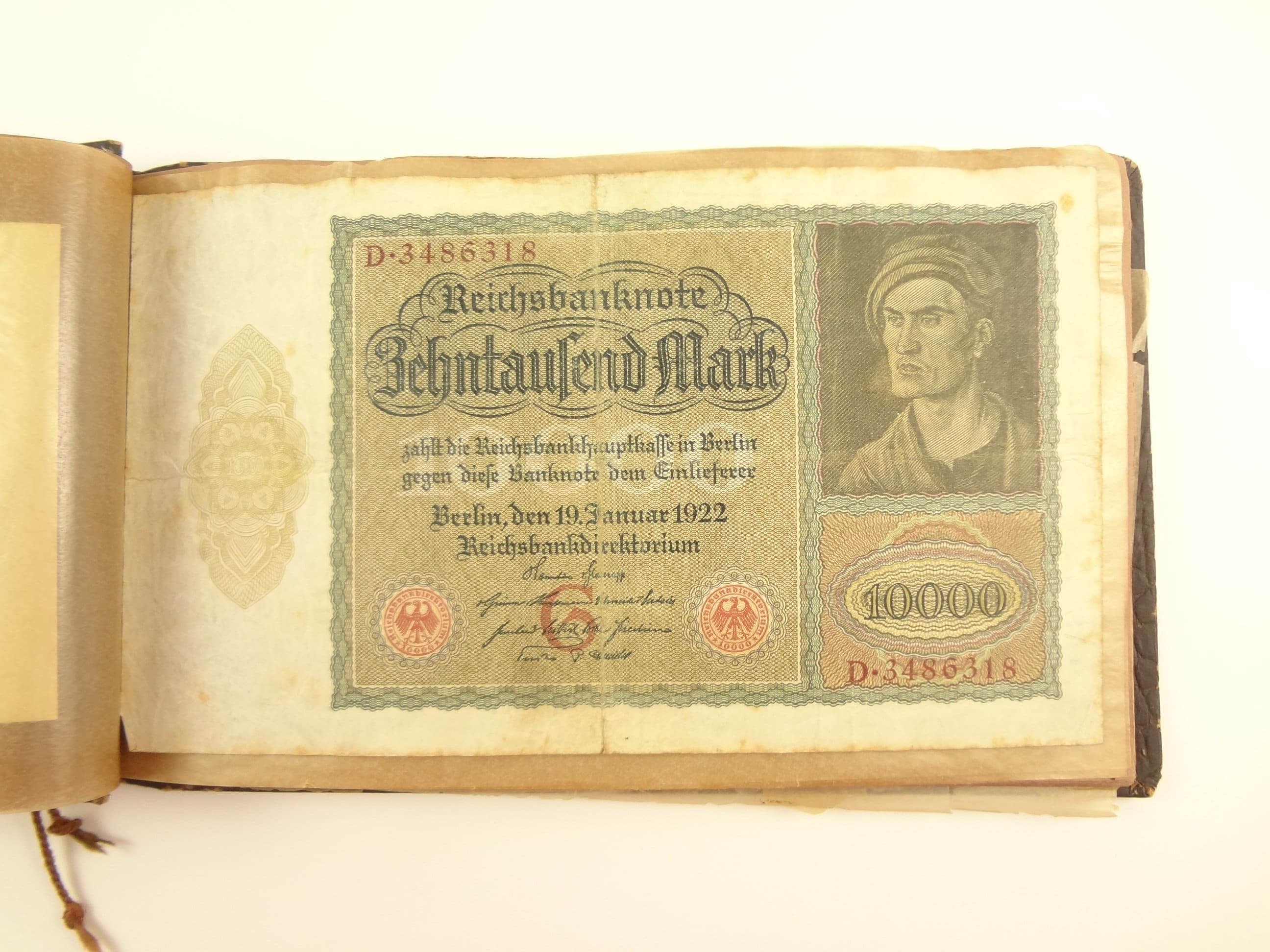 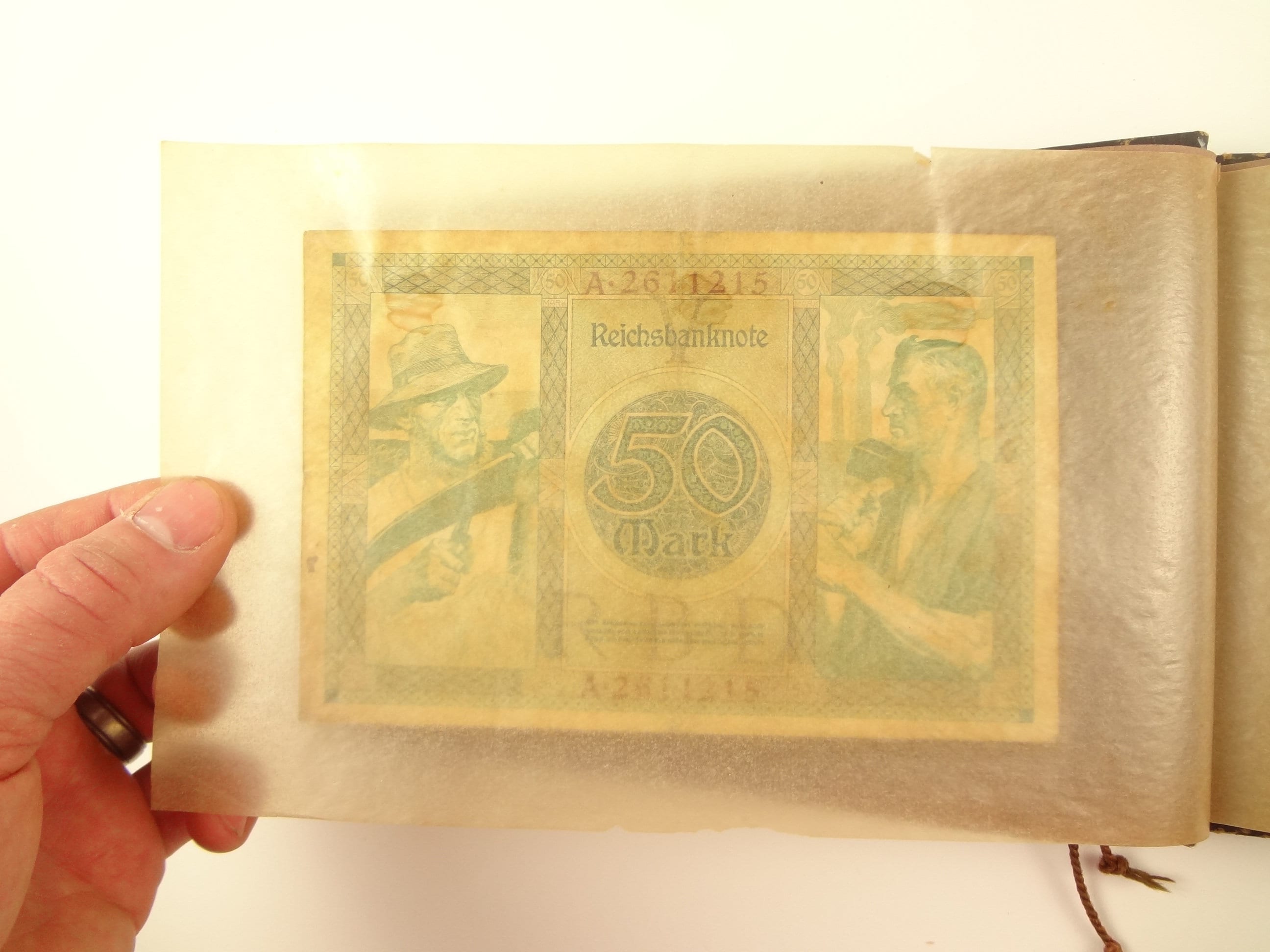 A fascinating collection of 100 German Marks, from 1914 to 1924, documenting the massive inflation seen through that period; more than the sum of its parts, the book was produced in period, and the tipped-in letter at the front hints at the discontent of the German people, directed against the nations requiring reparation, which surely contributed to the onset of WWII.

There are 100 Marks, starting at 1 Mark in 1914, and ending with 10 billion marks in 1923. I've went through them, checking them against online prices. Most marks seem to sell from $5-10 dollars (at least that is what is asked). There are a few rarities which I couldn't find examples of, like the three million marks example, which was surely an awkward value to issue and was quickly rushed past. The Marks are not only from the German state, but there are examples from banks of various cities, and at least one railroad issued Mark.

The letter at the front, when translated to English (by Google Translate) provides the following thoughts, which helps frame some context of the German population's mindset during the period after WWI:

"For our younger generation this is clear and tangible evidence of how terribly the German people have suffered. Every day the value of money sank by hundreds of thousands of marks, most recently with millions and billions in their pockets, most people had to starve."

"The numbers speak of the unspeakable suffering the German people suffered from the envy and hatred of our enemies!"

"We saved ourselves from the flood of paper money through heavy obligations. We want to work now and hope for a better future!"

At the rear of the book is a stamp indicating the book was sold by Louis Meisner of Dresden; a search of Dresden records from that time period indicates there was a Louis Meisner that was an apothecary (it is only perhaps the same person).

Historic Notes on the Inflation -

"The victor nations in World War I decided to assess Germany for their costs of conducting the war against Germany. With no means of paying in gold or currency backed by reserves, Germany ran the presses, causing the value of the Mark to collapse. Between 1914 and the end of 1923 the Papiermark's rate of exchange against the U.S. dollar plummeted. On 15 November 1923 the Papiermark was replaced by the rentenmark. During the hyperinflation, ever higher denominations of banknotes were issued by the Reichsbank and other institutions (notably the Reichsbahn railway company)." - Wikipedia

Measures approx. 24 x 14.5 x 1 cm. Faux leather binding resembling exotic skin (but where worn you can see that it is made of fiber). Sheets held in by fabric tie through spine. One tipped-in letter attached to the front board pastedown. 100 Marks posted to sheets. Two sheets with two Marks, so 98 sheets with Marks. Seven empty sheets at the rear.

See pictures. Binding is worn, with edge and corner wear, a few rubs, and some loss to the gilt of embossed title. Spine tie eye-holes are rusty. There is some toning, fox spots, etc. to the leaf of explanation. There are edge tears, on occasion to the wax papers the notes are pasted on. The notes are placed on the pages with spots of a (glue?) that can be see through the wax paper. Some notes are mounted on paper (much fewer) but are still mounted in the same way, so that you can lift it and look at the rear.