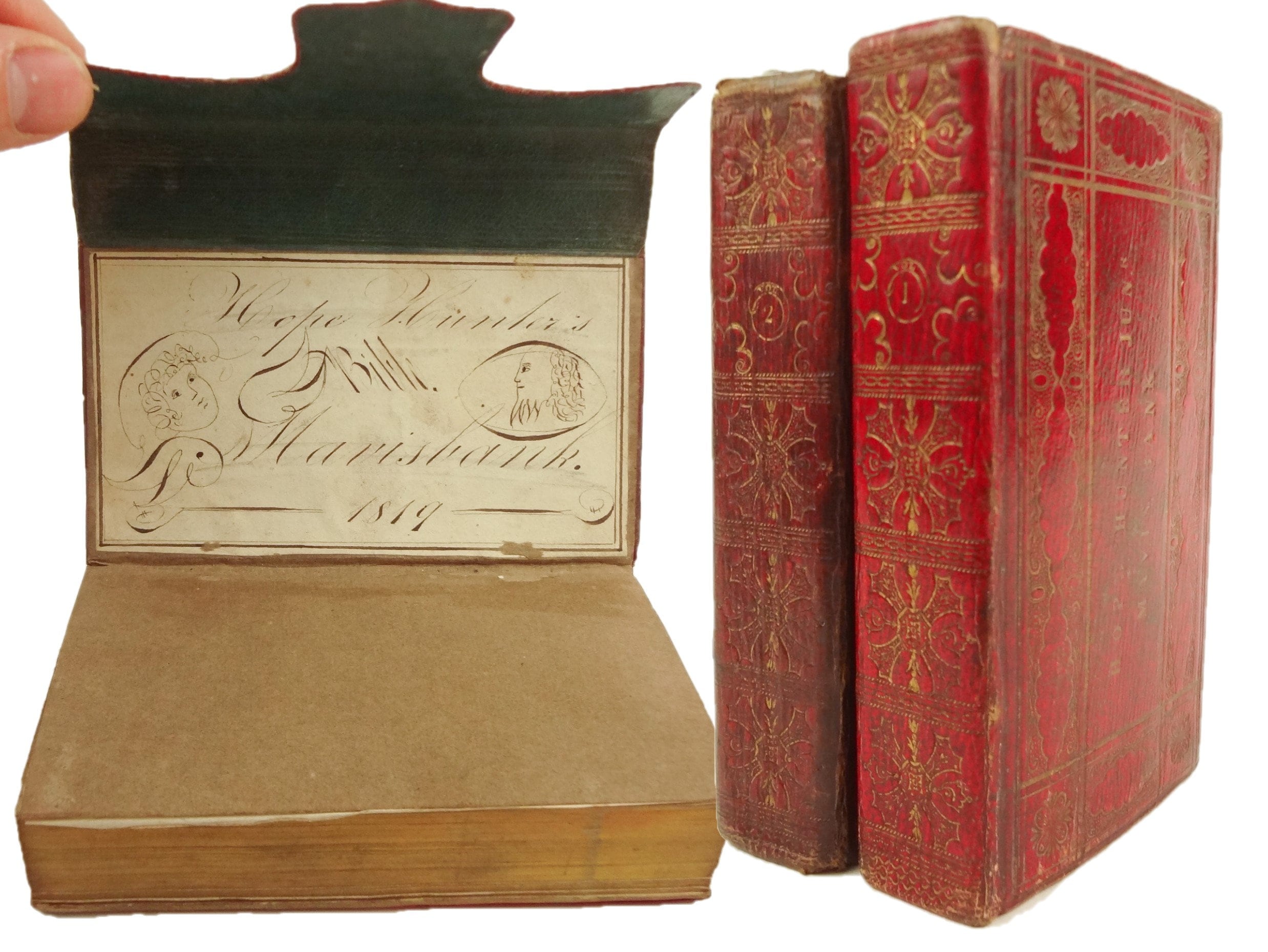 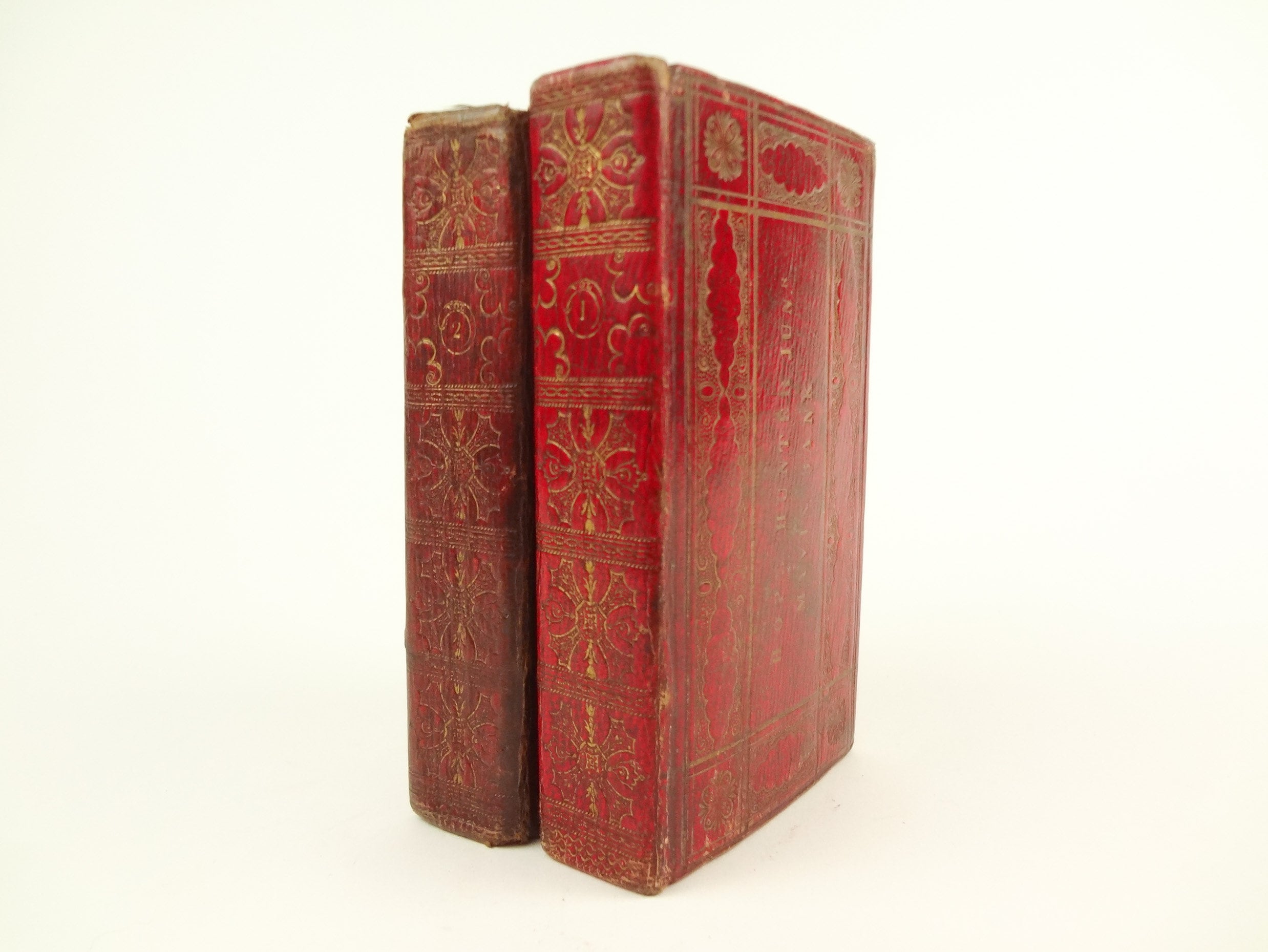 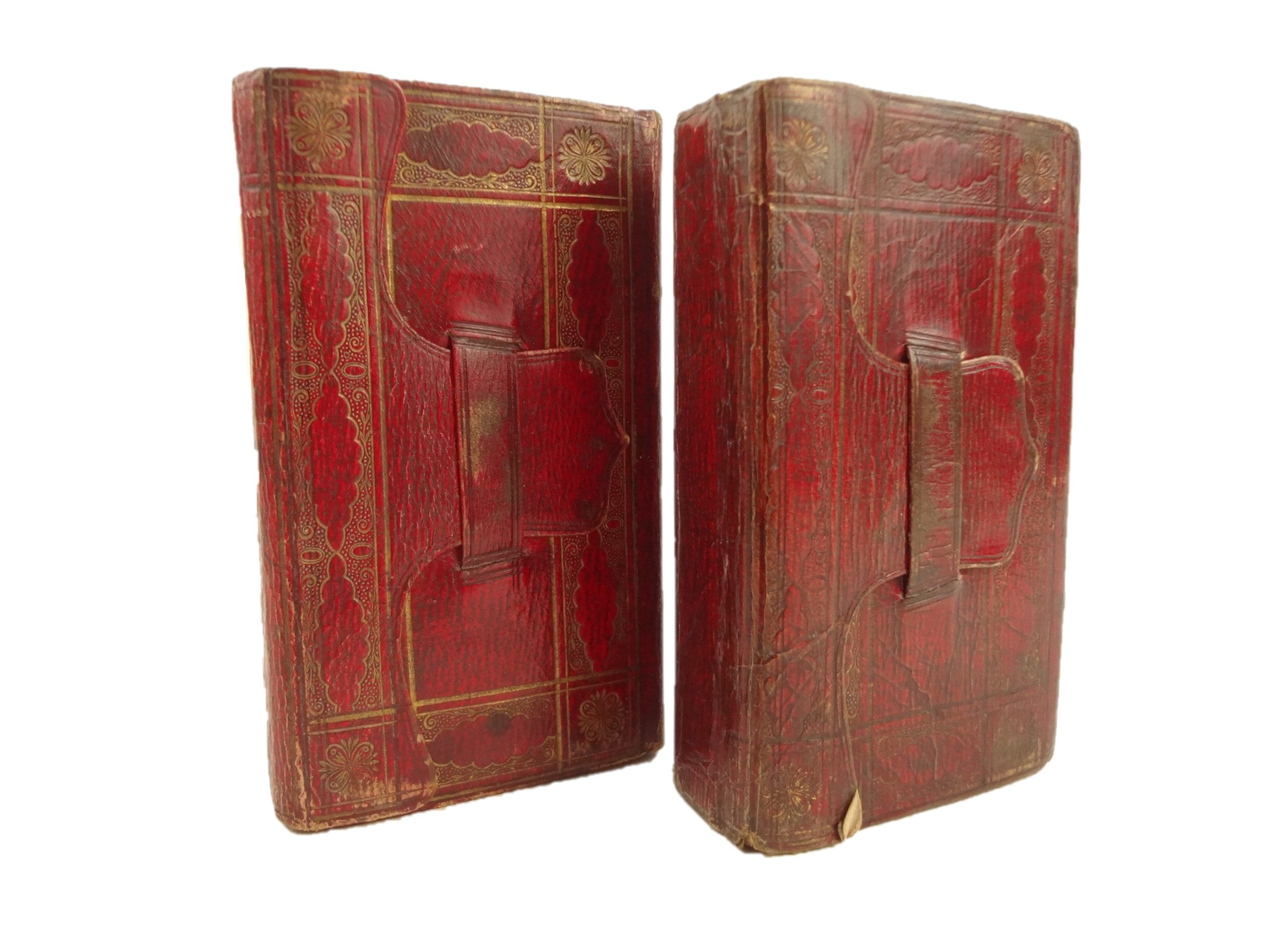 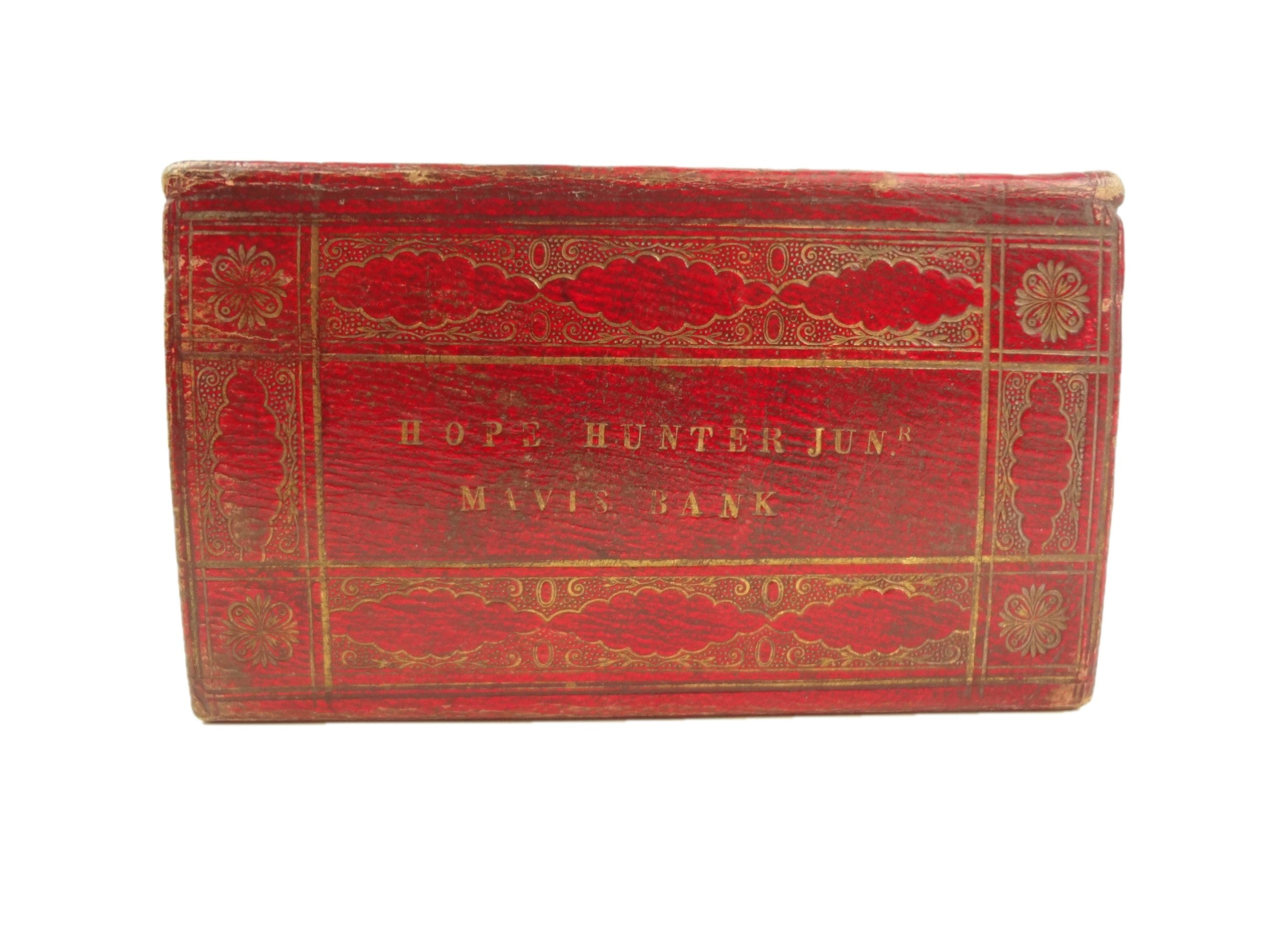 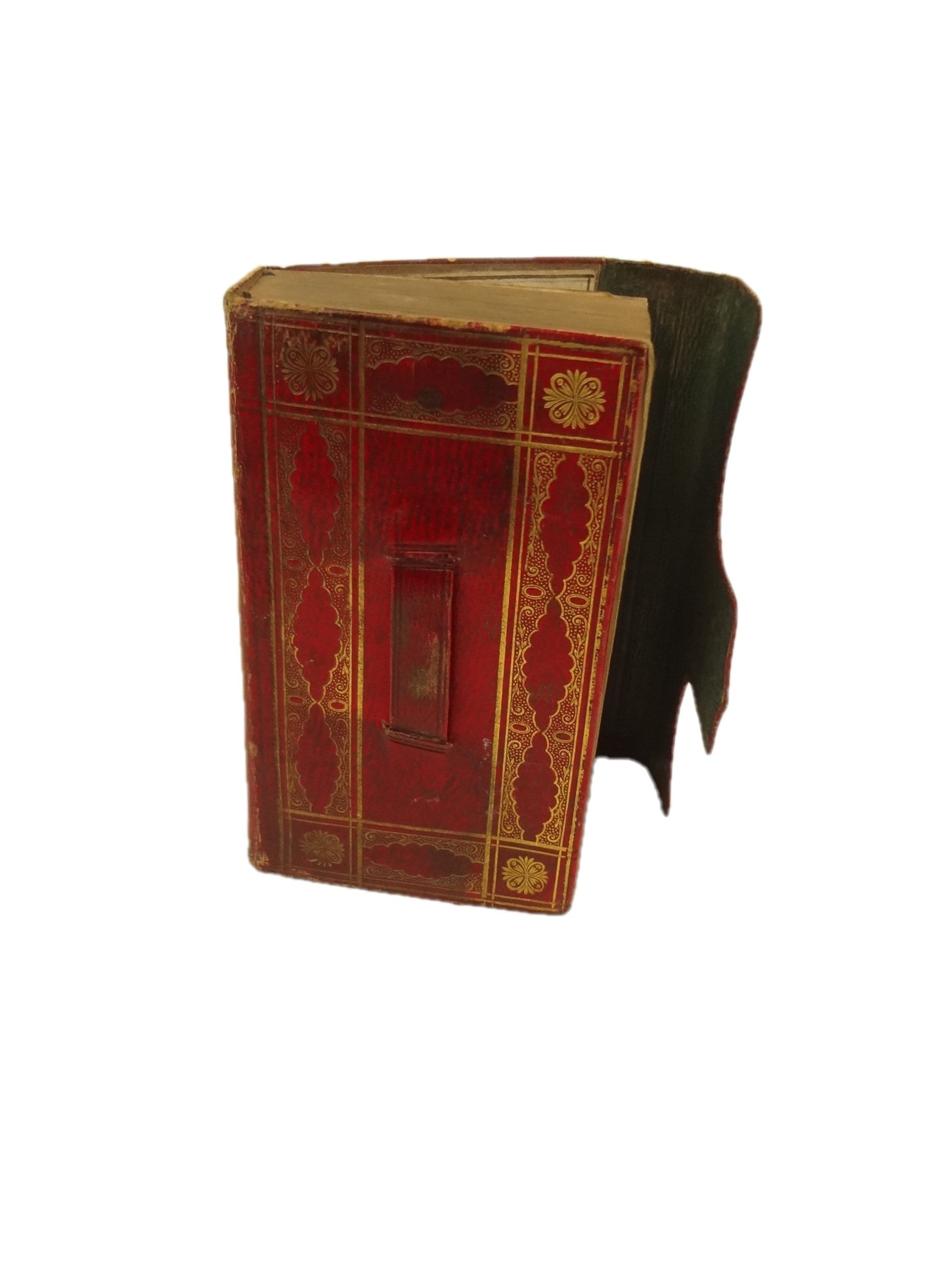 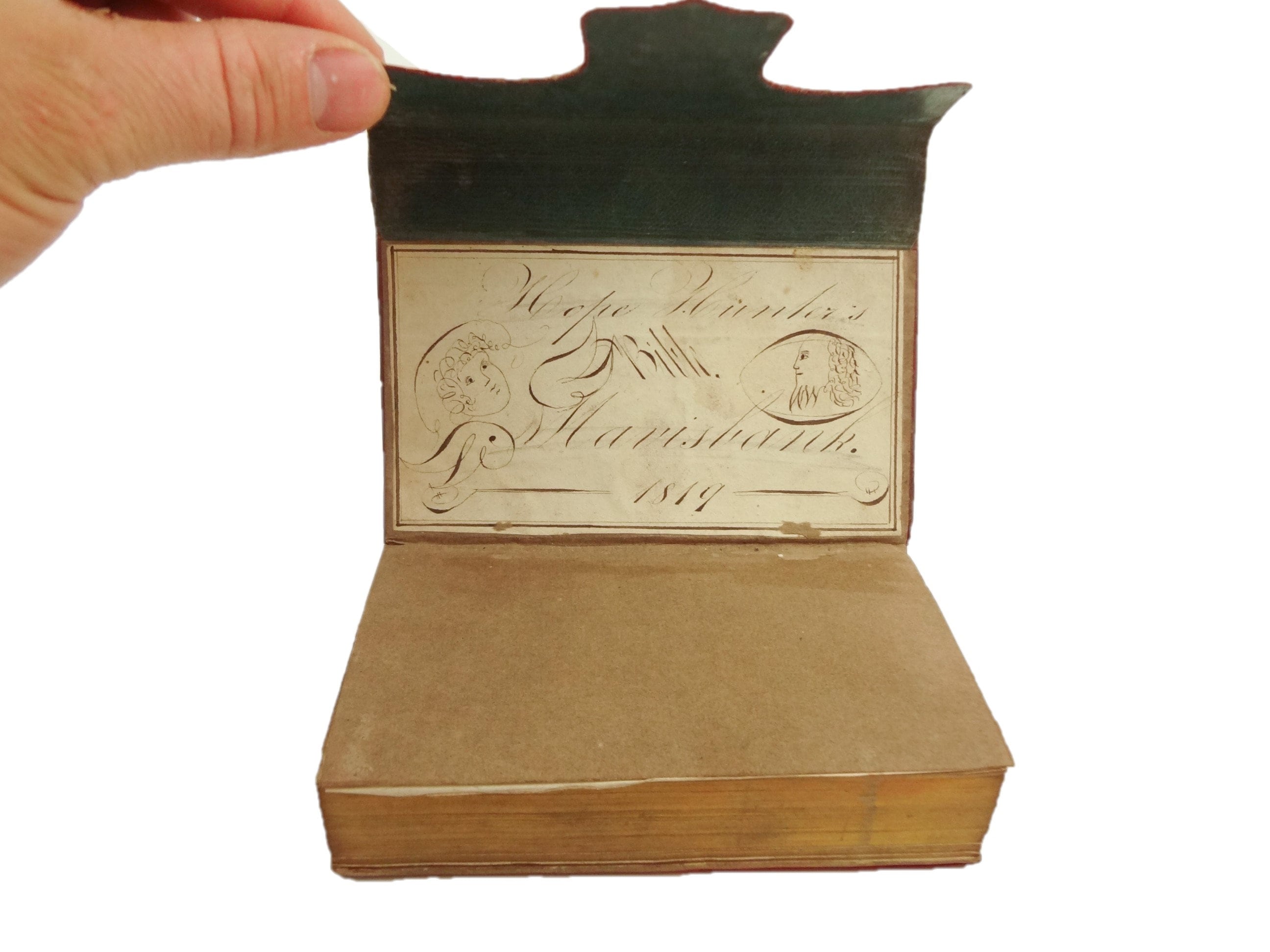 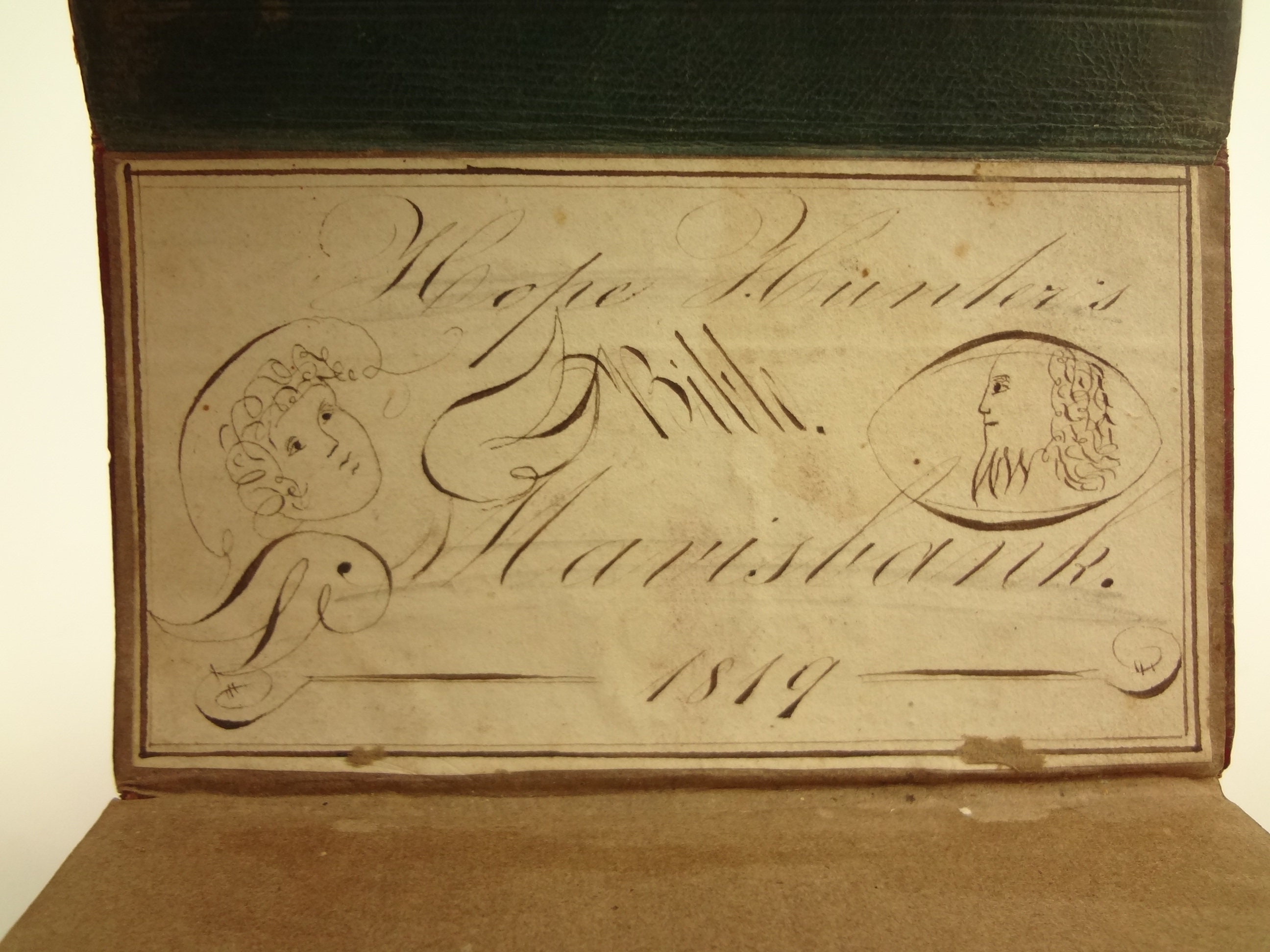 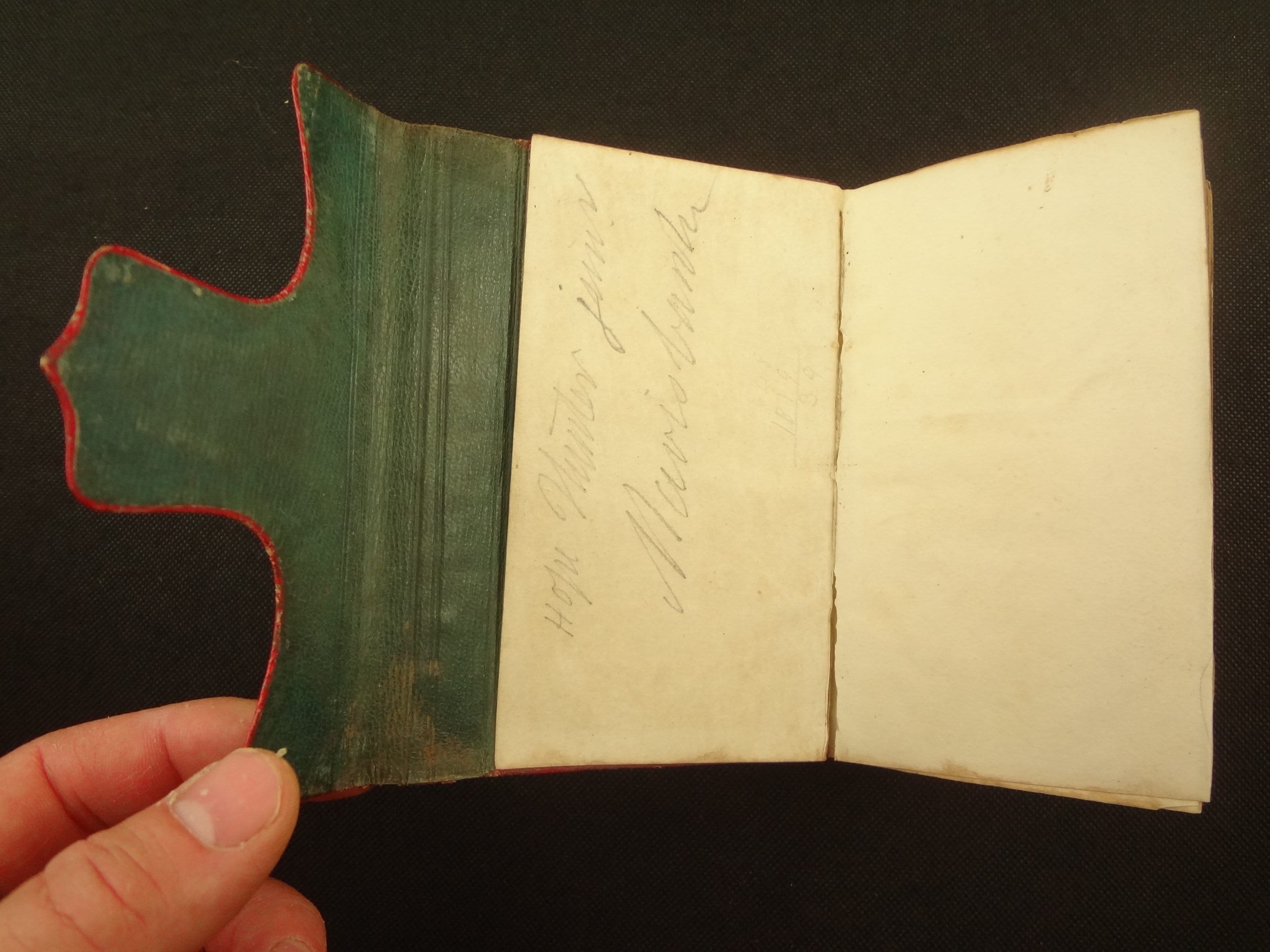 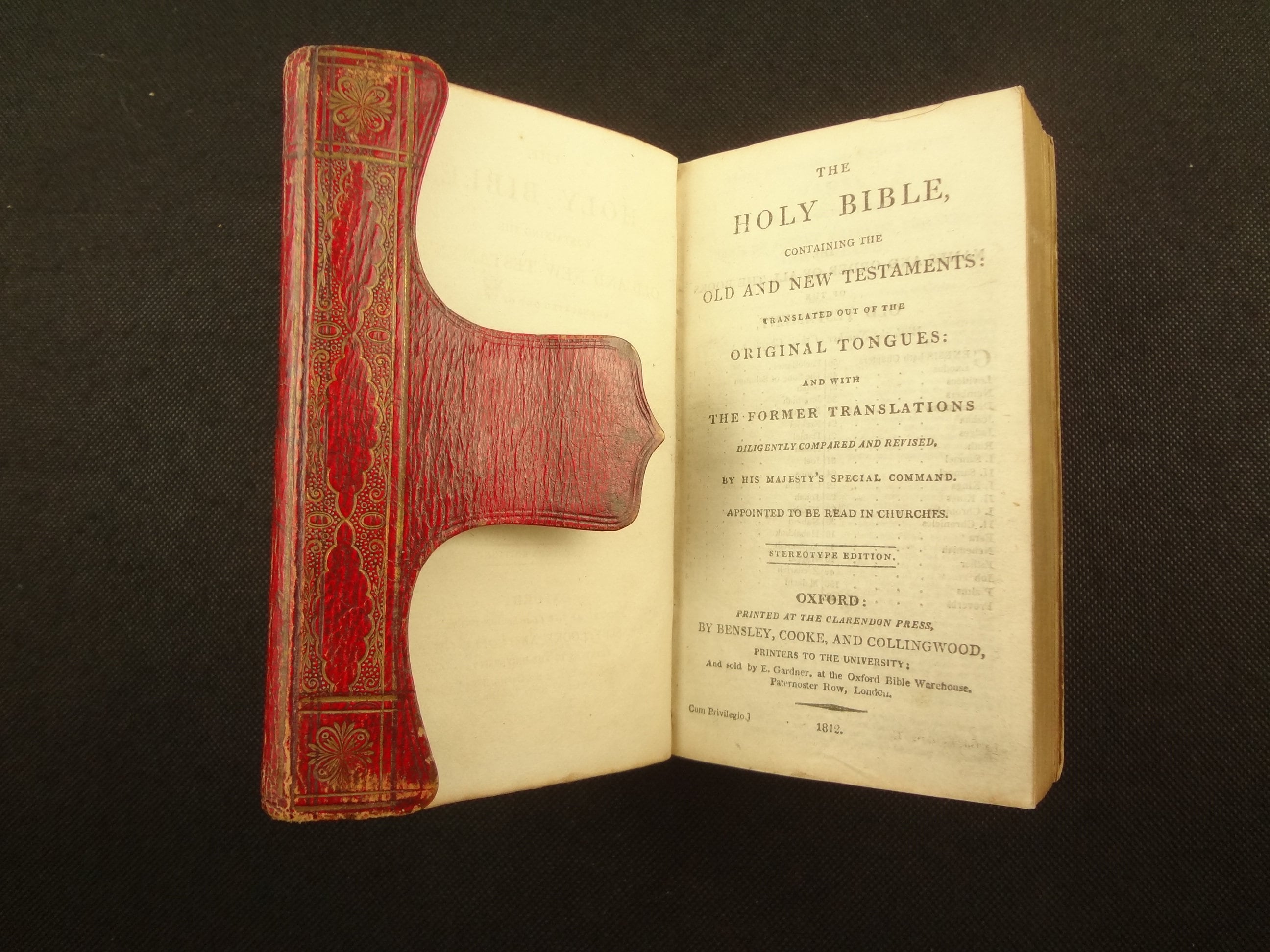 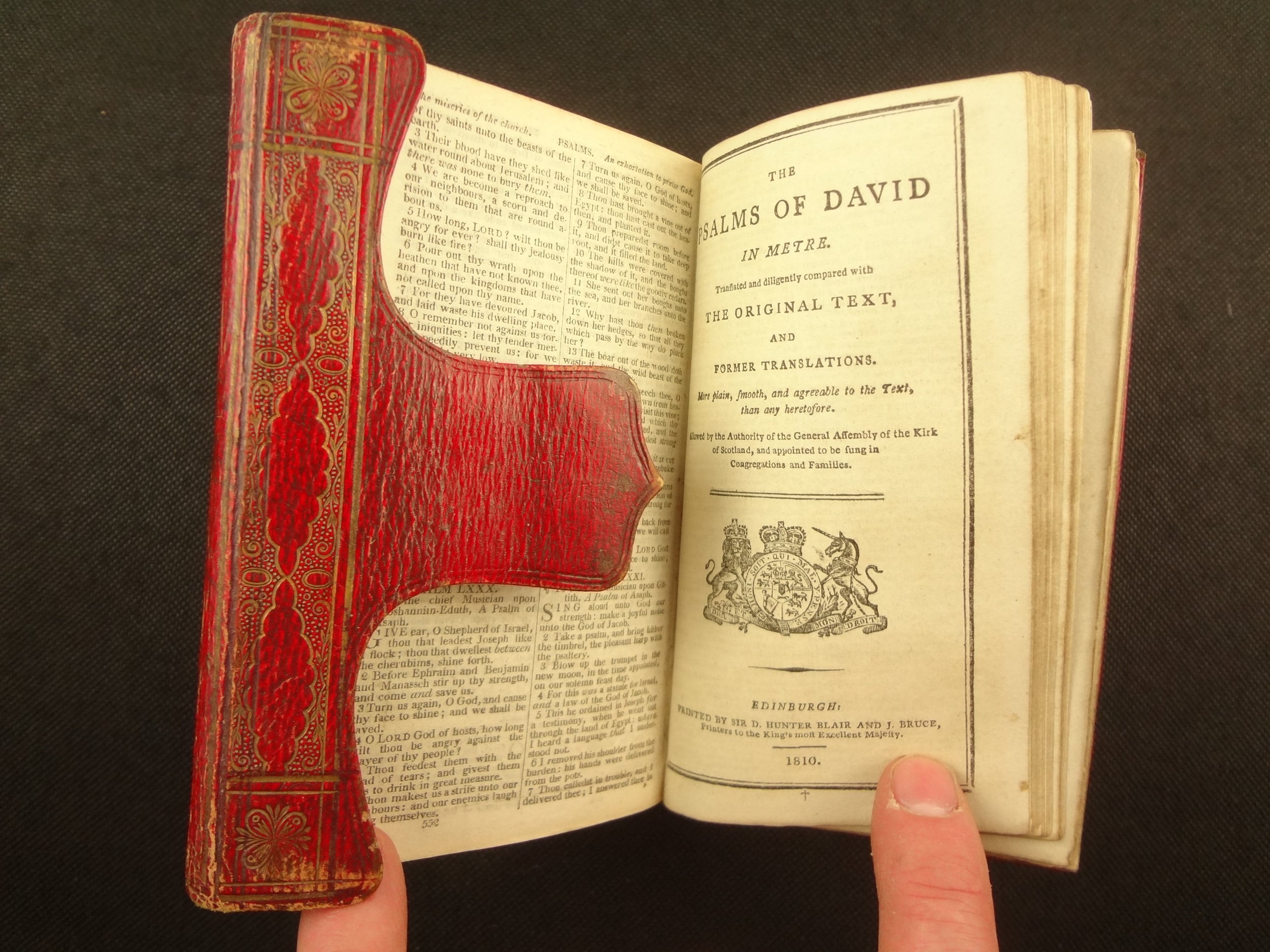 A beautiful, complete in two volumes, 1812 Holy Bible, with The Psalms of David (1810), and with delightful manuscript bookplates seeming to originate from the somewhat mysterious and beautiful Mavisbank House of Scotland.

The books are bound in dark straight-grain red morocco wallet-style bindings. Inside each flap is a bookplate, hand-drawn, stating, "Hope Hunter's Bible, Mavisbank 1819" with a man and woman inhabiting the right and left margins.

Then again, the Hunters might have only worked on the property. Or, it might refer to somewhere else entirely. There is a Mavisbank (named after this home) in Jamaica. Exact word searches of "Hope Hunter" and "Mavisbank" return no results.

A beautiful bible, with unique and notable bookplates and mysterious provenance!

The Historical Catalogue of the Printed Editions of Holy Scripture..., British Foreign Bible Society, catalogue this edition as number 1022 (1903).

Each vol. measures approx. 13 x 7.8 x 3 cm. Dark red morocco straight-grain bindings richly tooled in gilt. Wallet-style bindings. Boards arranged into frames, with "Hope Hunter Jun.r Mavis Bank" tooled onto the front board of each. Spines decorated in gilt forming five compartments, four compartments with a cross and florets design, and one with the volume inside a scroll-like design. All edges gilt. Two manuscript bookplates as the pastedowns of the bindings. Includes the Old Testament (volume one and partial volume two), NT and Psalms of David (volume two).

See pictures. Very attractive bindings; vol. 2 has more wear and toning than volume one. It seems likely they were kept in two different places. Perhaps vol 2 received more wear because it was taken to church more often, being the NT and Psalms of David. On both there are some signs of wear around edges. V2 has chip at top of spine, and a little dog-earing at one corner of the wallet flap. V2 has a darker top edge. Both have manuscript bookplate in binding. Occasional thumbing and dog-earing in both. V1 had a second ex libris inscription at the verso of the flyleaf. The bookplate and blank front pages of v2 have some light pencil scribbles (child?). The last several gatherings of v2 are a little loose. V2 - there is one bump at the top-corner mid-book causing dog-earing of those pages. Both appear that a little moisture may have been present at top edge, with a hint of a moisture mark along top-edges of page. Despite nitpicking notes, a very attractive little set.