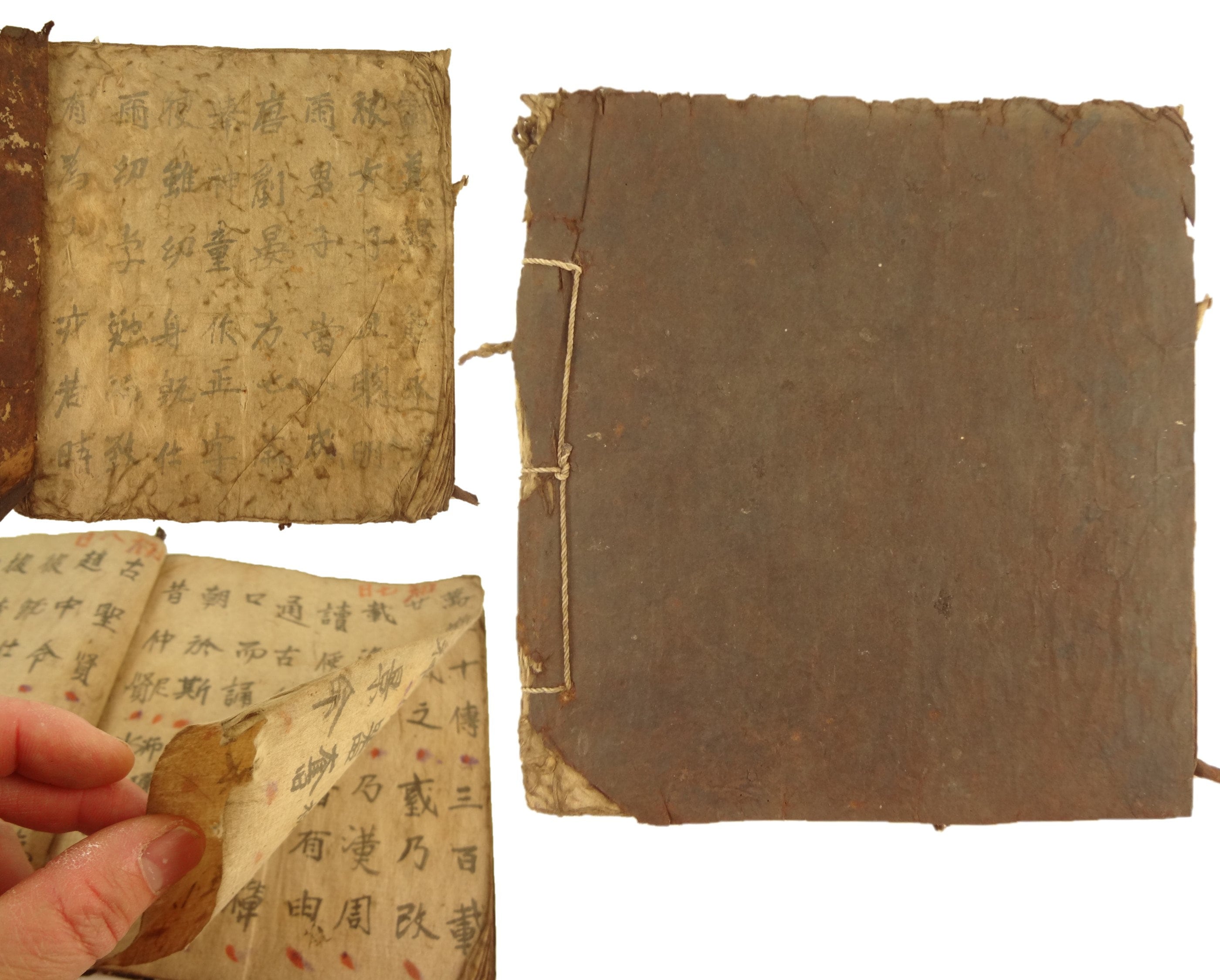 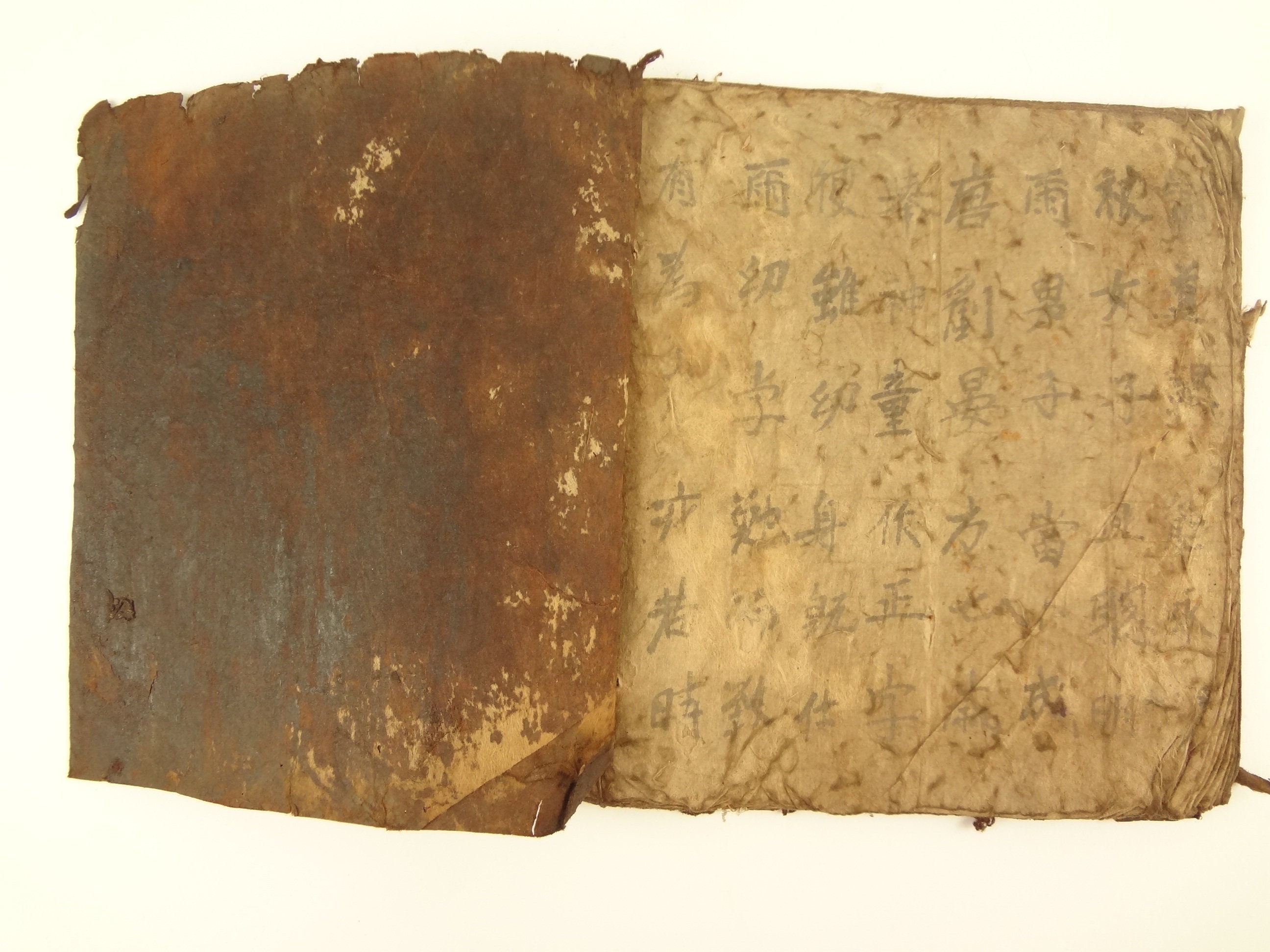 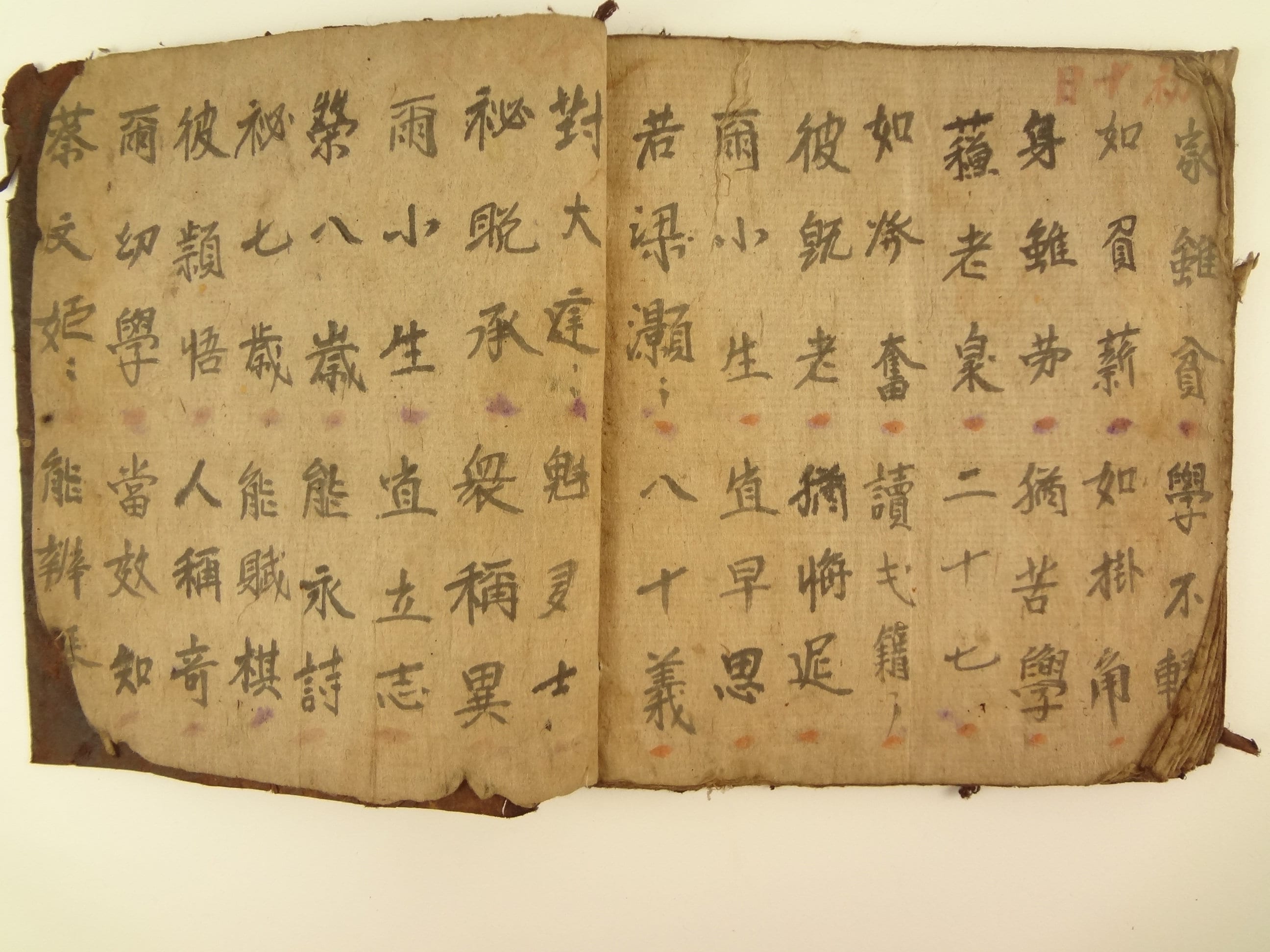 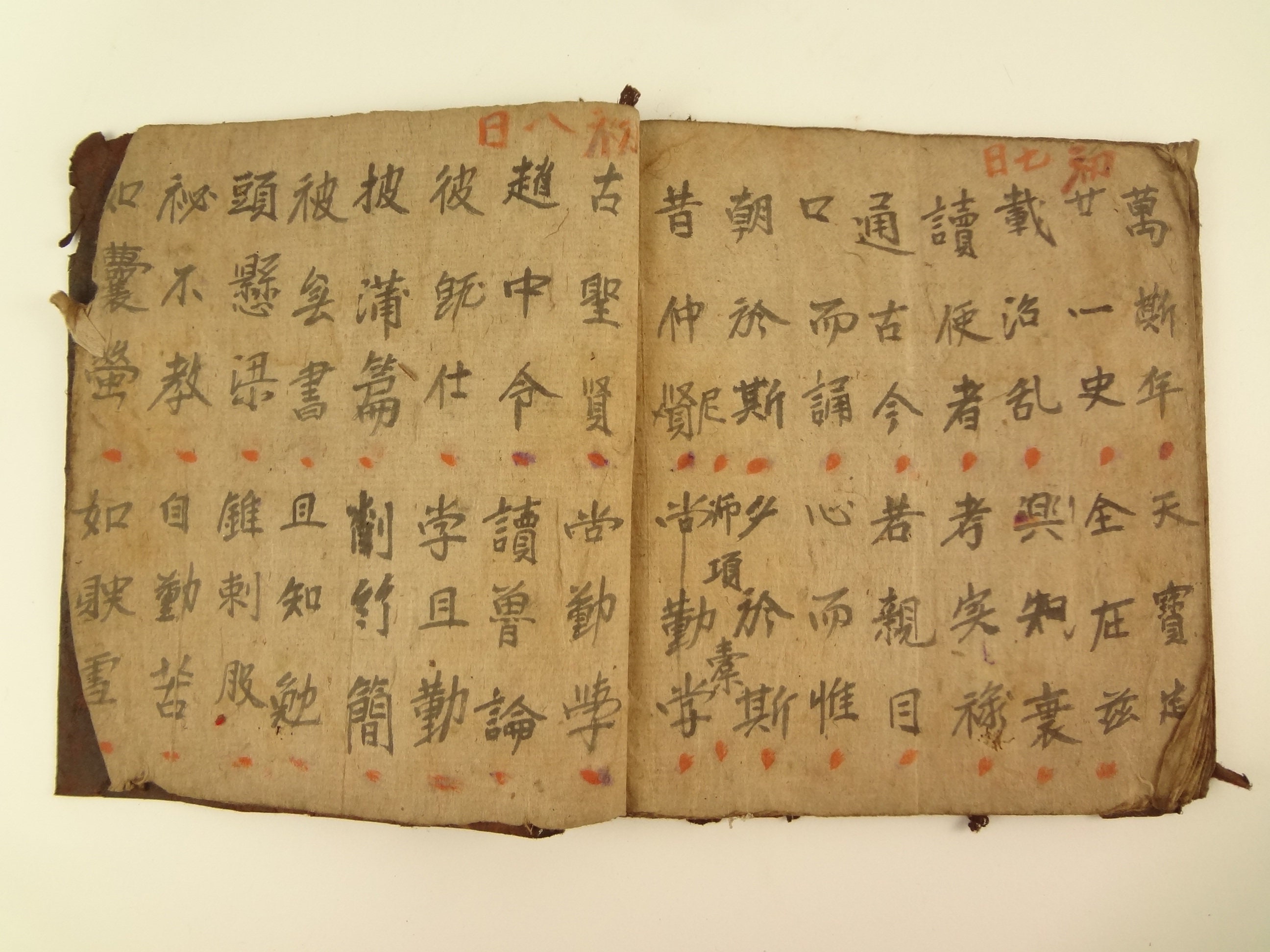 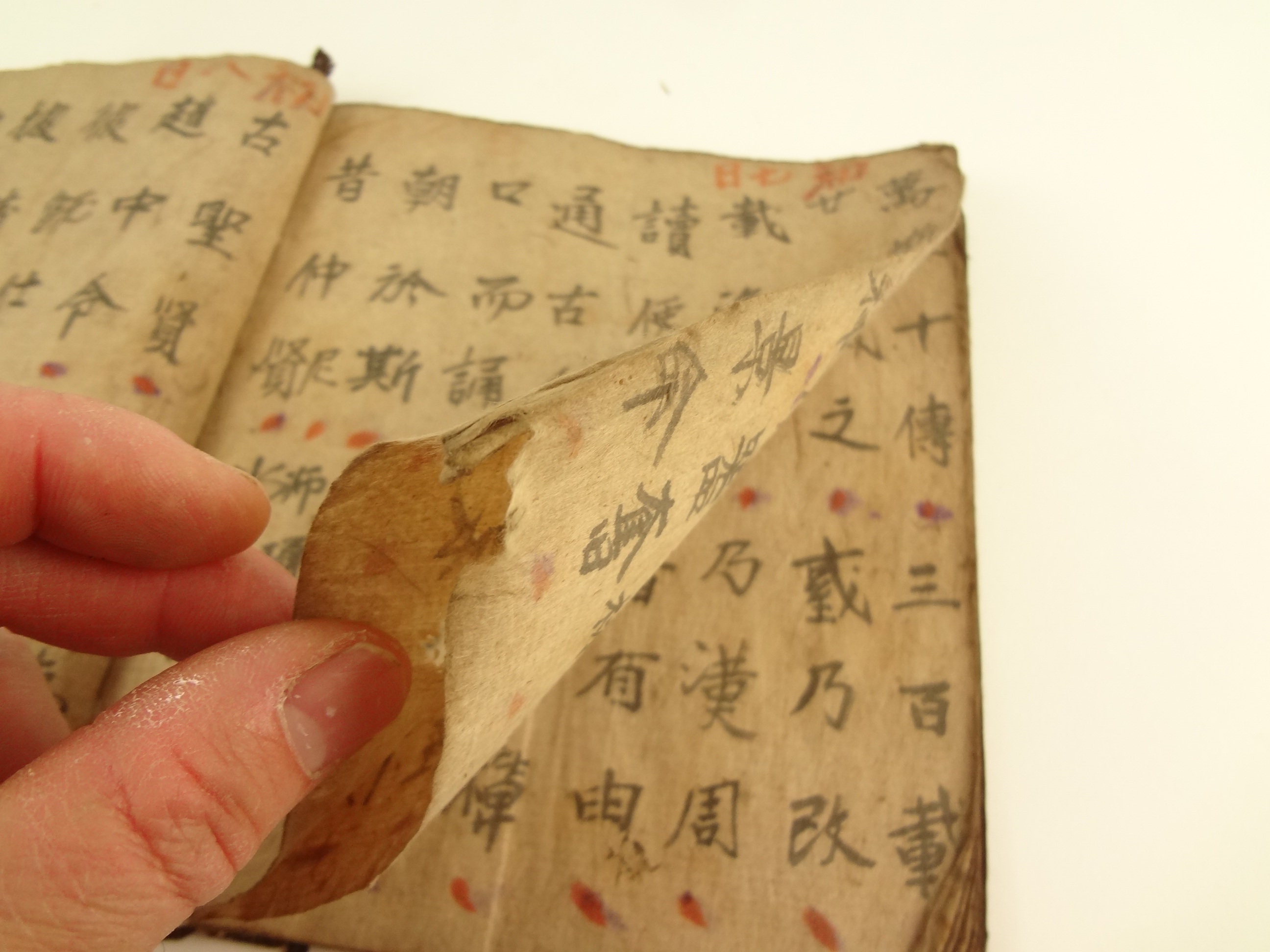 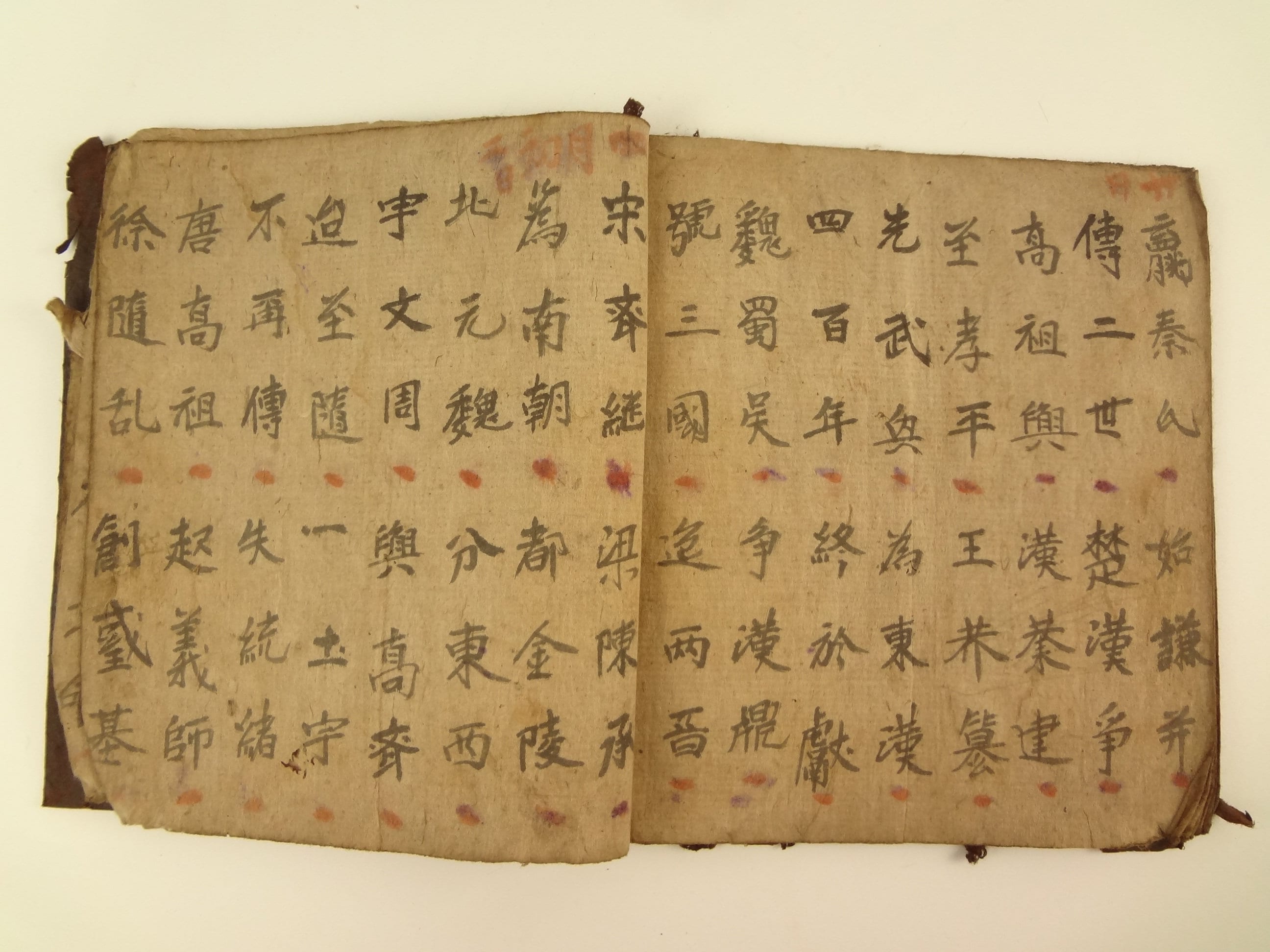 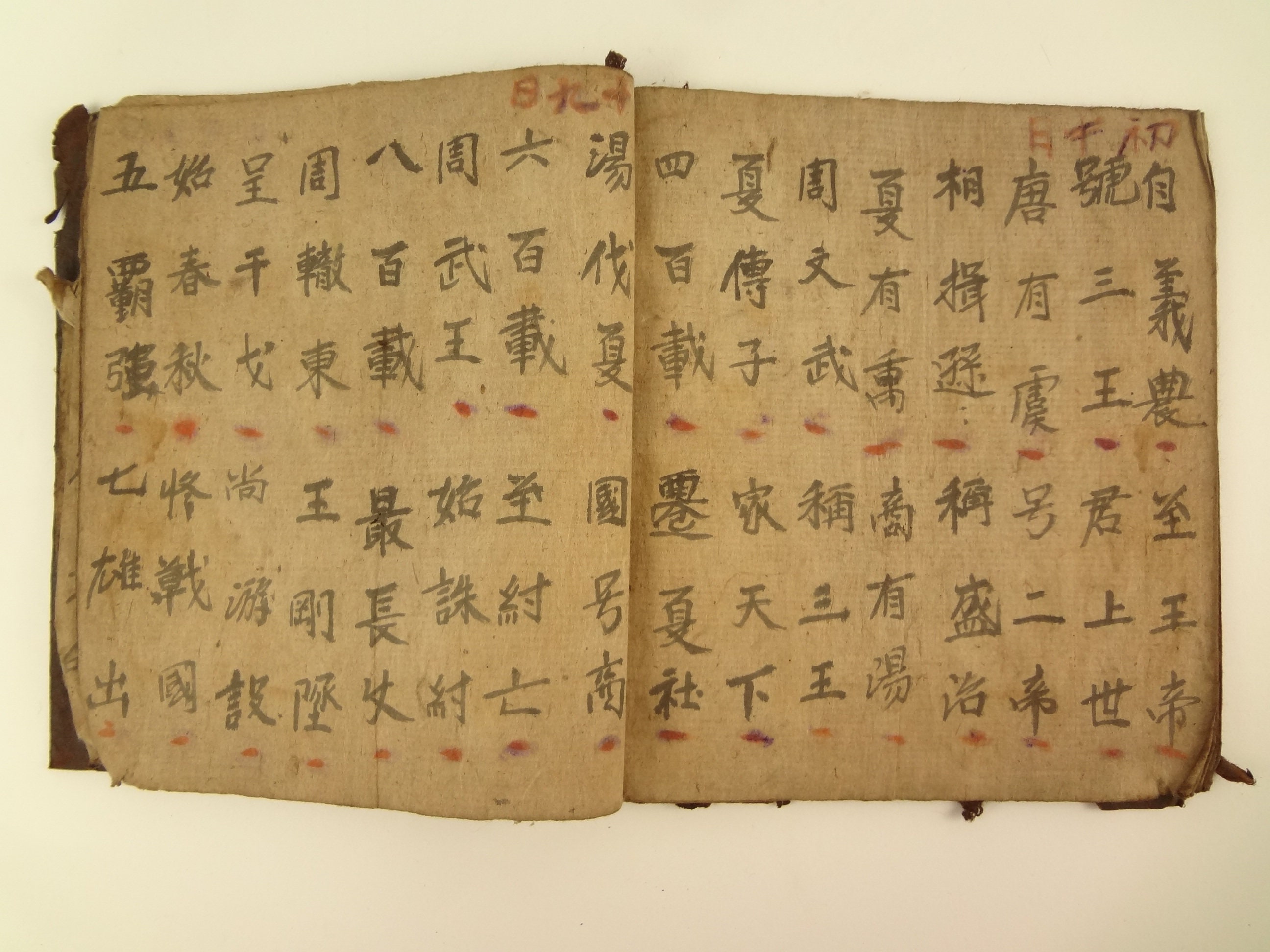 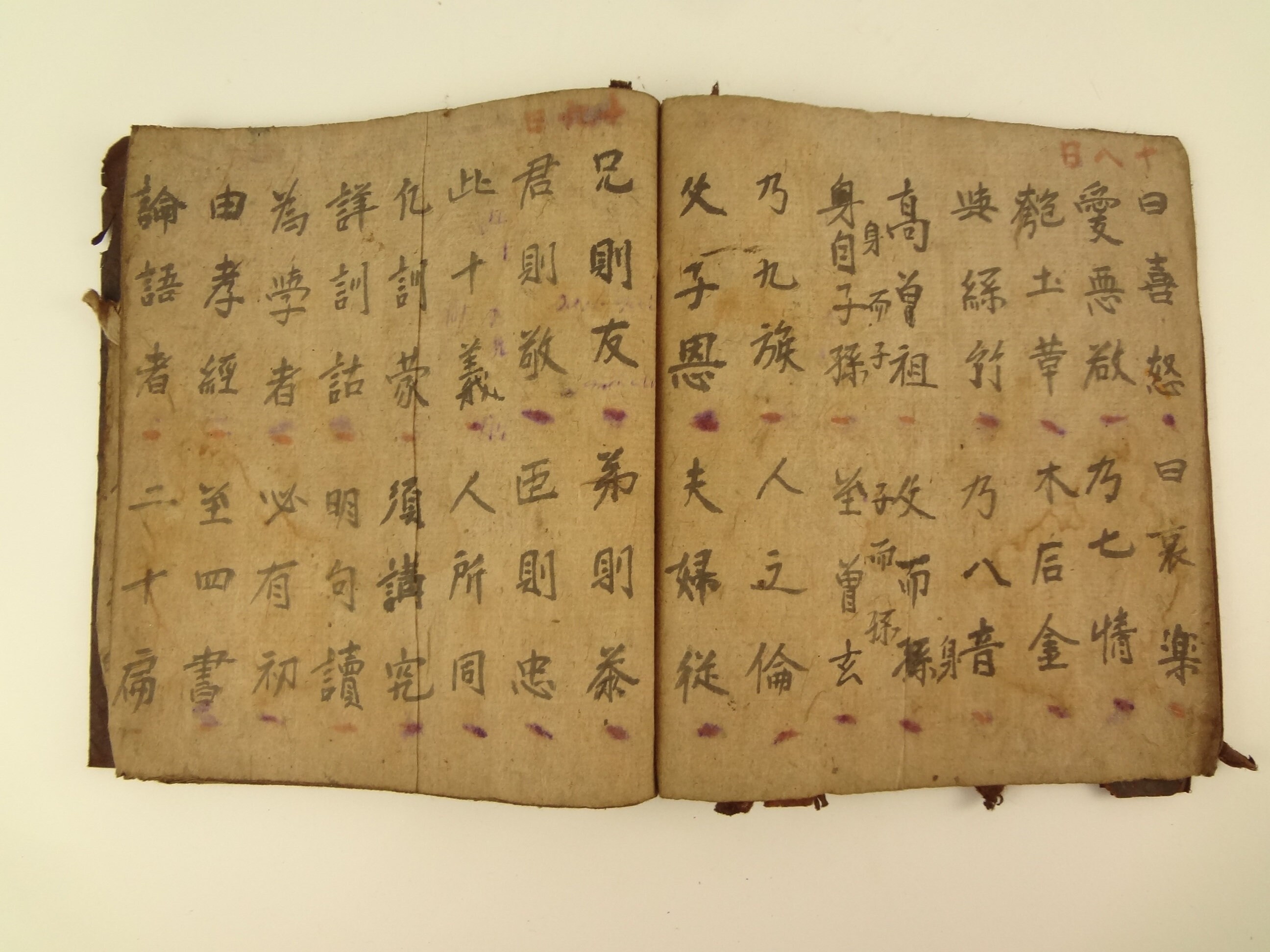 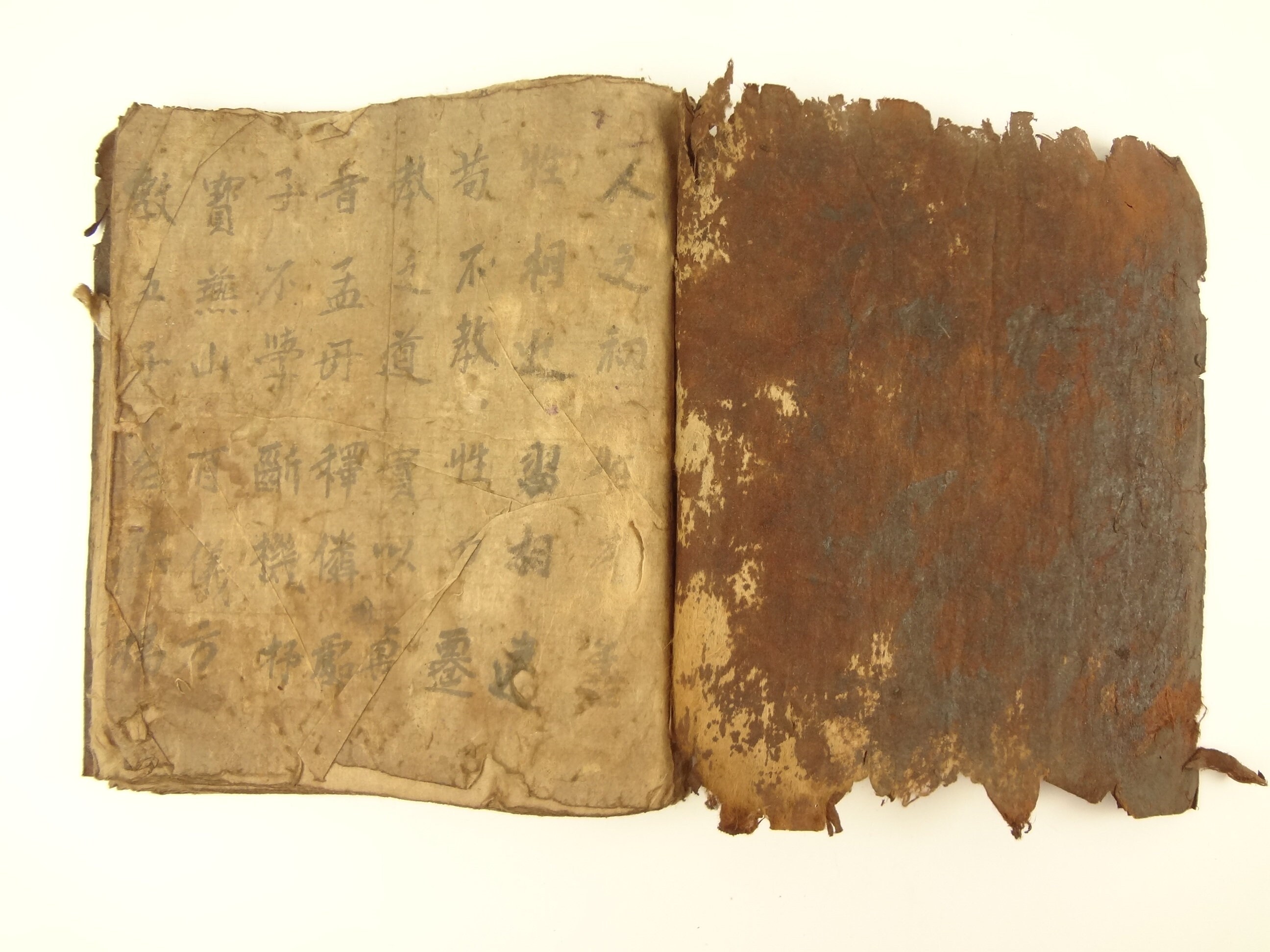 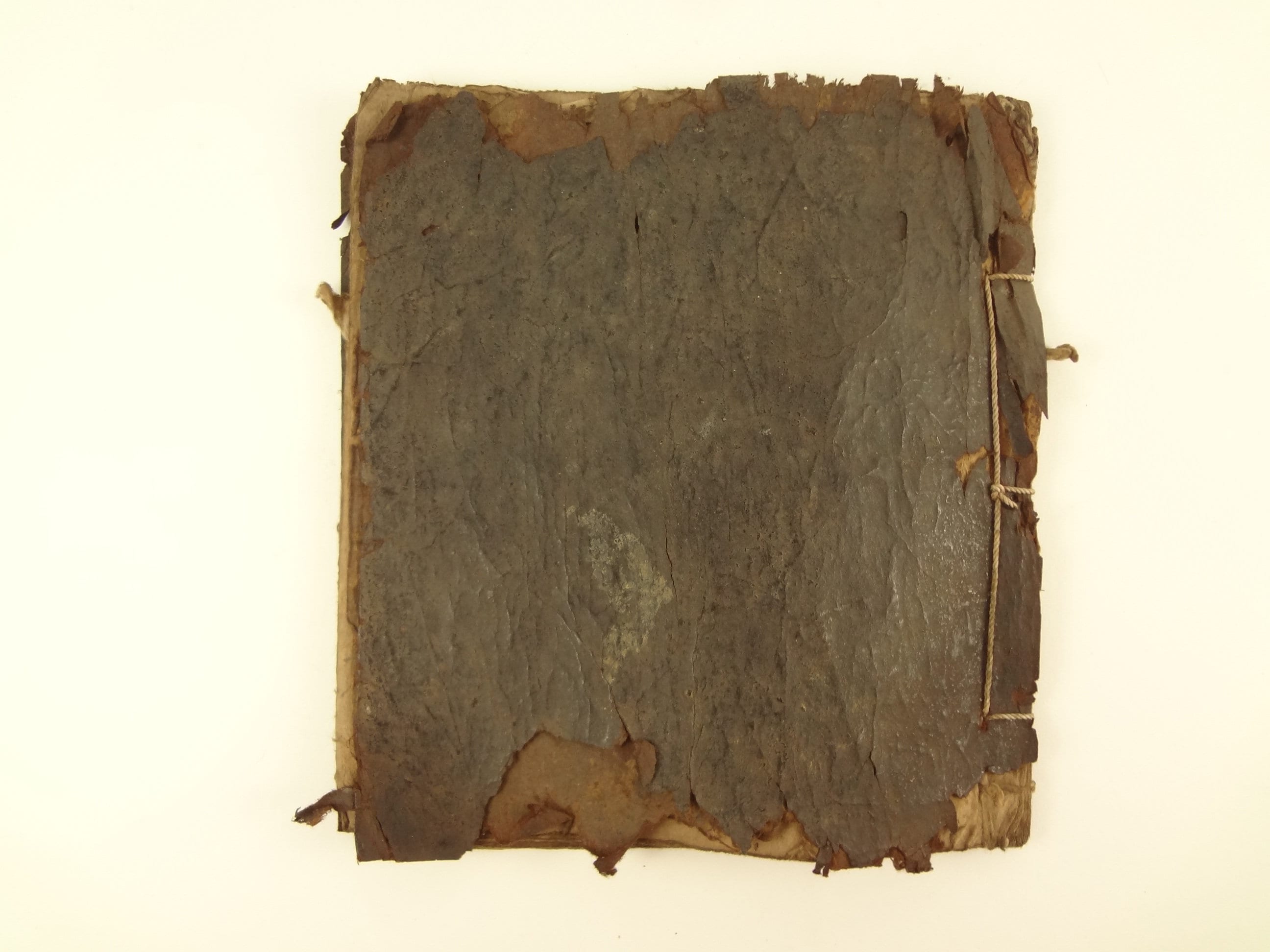 A staple of Chinese education, here is a manuscript copy of the Three Character Classic, San Zi Jing.

This came to me through an auction, with no description or background. Through much research we determined it is a manuscript copy of the Three Character Classic, described by Wikipedia as "one of the Chinese classic texts... the embodiment of Confucianism suitable for teaching young children. Until the latter part of the 1800s, it served as a child's first formal education at home."

"...probably written in the 13th century, mainly attributed to Wang Yinglin during the song dynasty". Note - This is referring to the text, not this manuscript. See dating thoughts for this manuscript below.

"The text is written in triplets of characters for easy memorization. With the short and simple text arranged in three-character verses, children learned many common characters, grammar structures, elements of Chinese history and the basis of Confucian morality, especially filial piety and respect for elders."

From a Western perspective, Chinese texts begin at the rear and read in columns, from right to left. Compare the "last" leaf of this work with the Chinese excerpts at the Wikipedia page for the Three Character Classic and you'll find this work matches.

Further considerations: based on the paper, this was likely a more common notebook. Higher-end paper has a yellowing that is a chemical that protects Chinese books from bugs. Also, this book-form resembles Chaoben (manuscripts produced in the education process), which indicates it was produced in the late 1800s or early 1900s.

Opportunity for further study: based on the histories included, one can conclude which period it was produced in (see Wiki for further clarification). I've reached the limit of my abilities, and Google translates, and I'm unable to ascertain which histories are specifically included.

Google translate (in the scan setting) does return the names of many dynasties, further assuring me this document is the Three Character Classic.

A unique item, not often on the Western market. An opportunity to own a classic work of the Chinese educational system in a unique book form. Also with the opportunity for further scholarship (perhaps in an institutional setting).

Measures approx. 18 x 18 x .5 cm. Wrap is made from a dark fibrous paper. The binding is held together with a three-hole tie. The paper is a soft fiber with large tissue grains. It is written in manuscript with black ink. There are eleven leaves with writing on both sides. Generally each pages has eight columns, with three characters on the top half, and three characters on the bottom half.

See pictures. Pleasing wear, assuring that it was well-used in period. Binding with chipping around edges, and some wrinkling of the wrapper. 1st and last leaf soiled, toned and ink fading. Bottom corner dog-eared. Soiling, toning and fading throughout, but worst at edges and ends. Some color ink additions (at top and central dots) have bled a little.