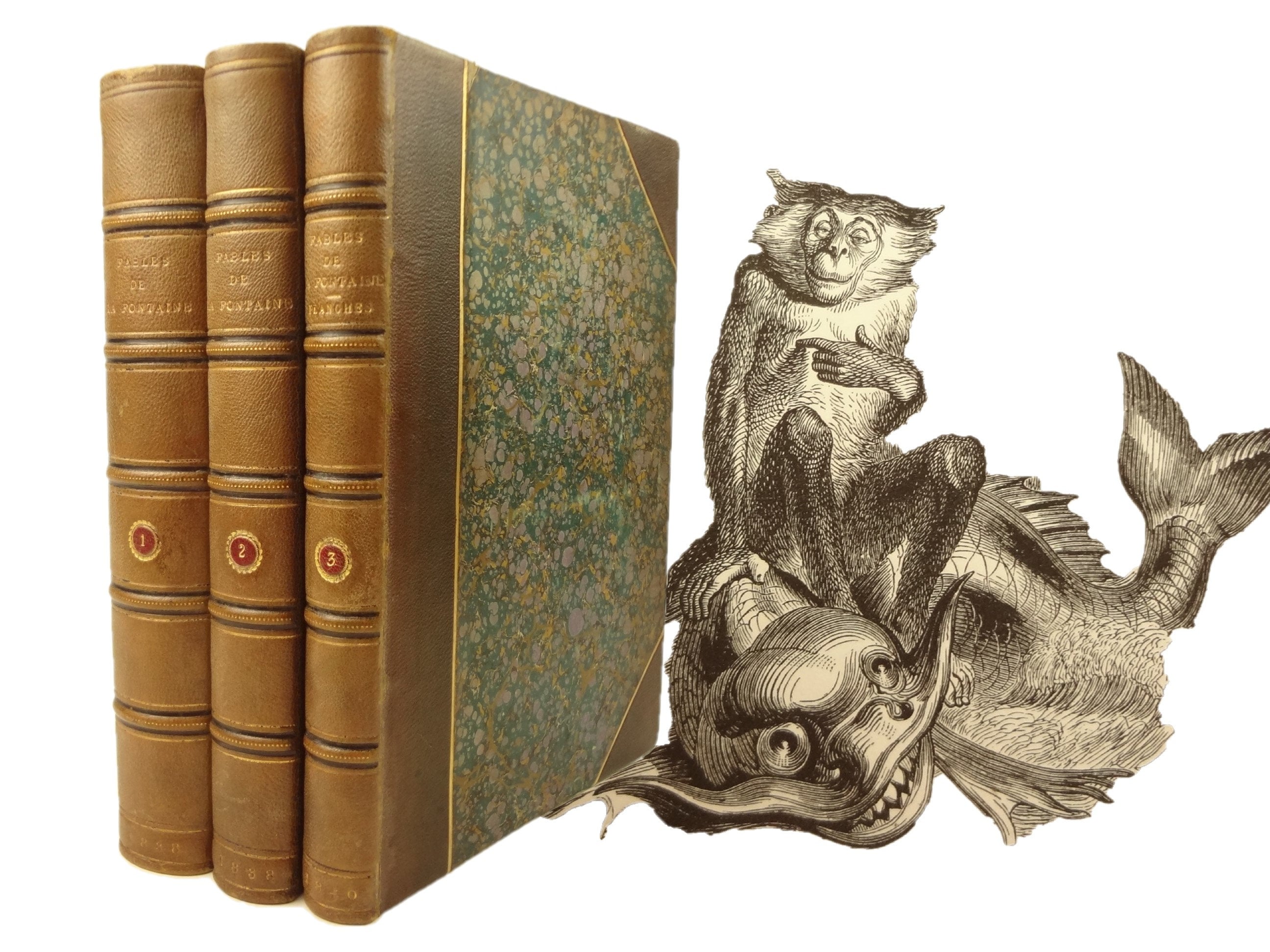 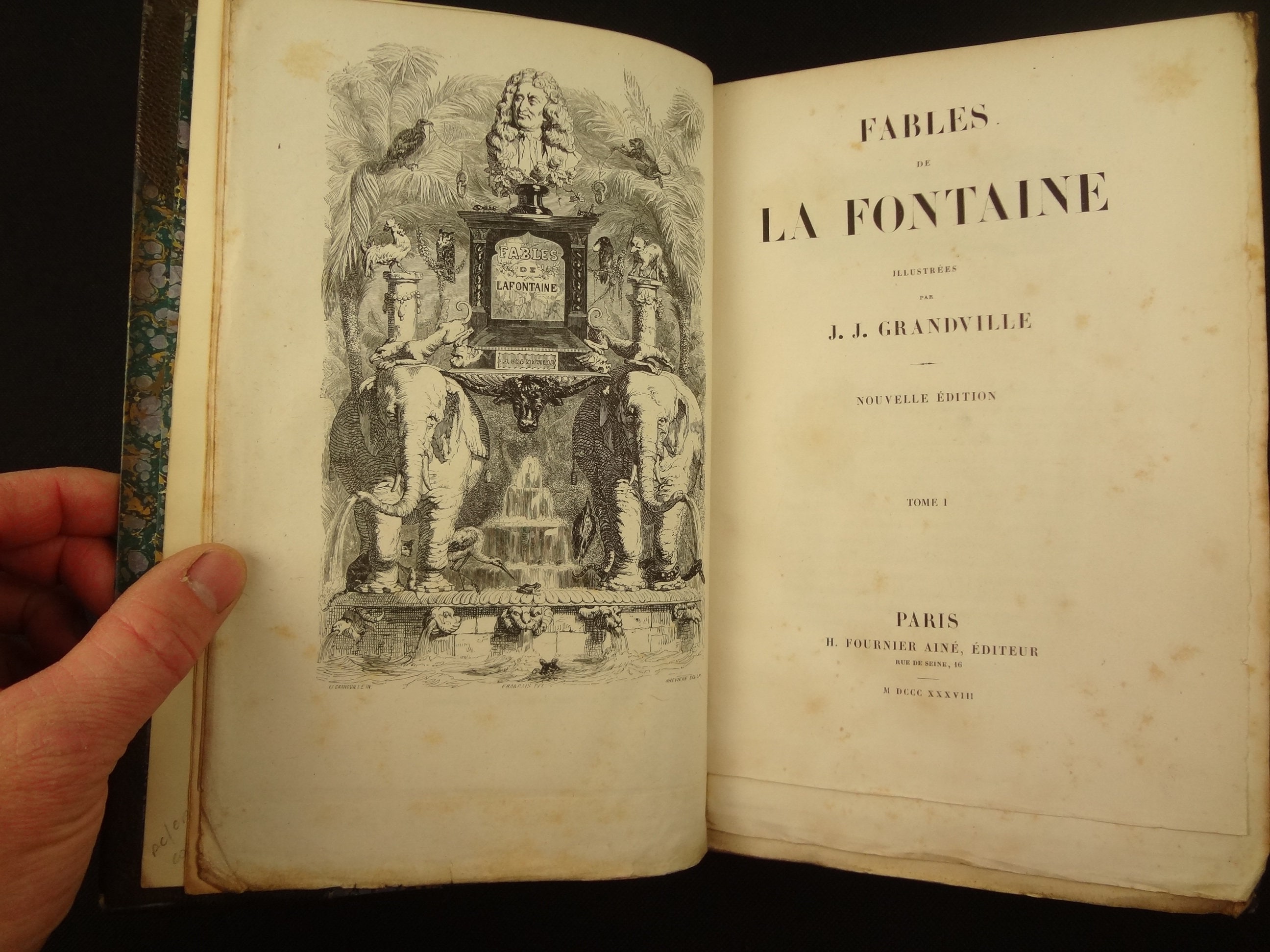 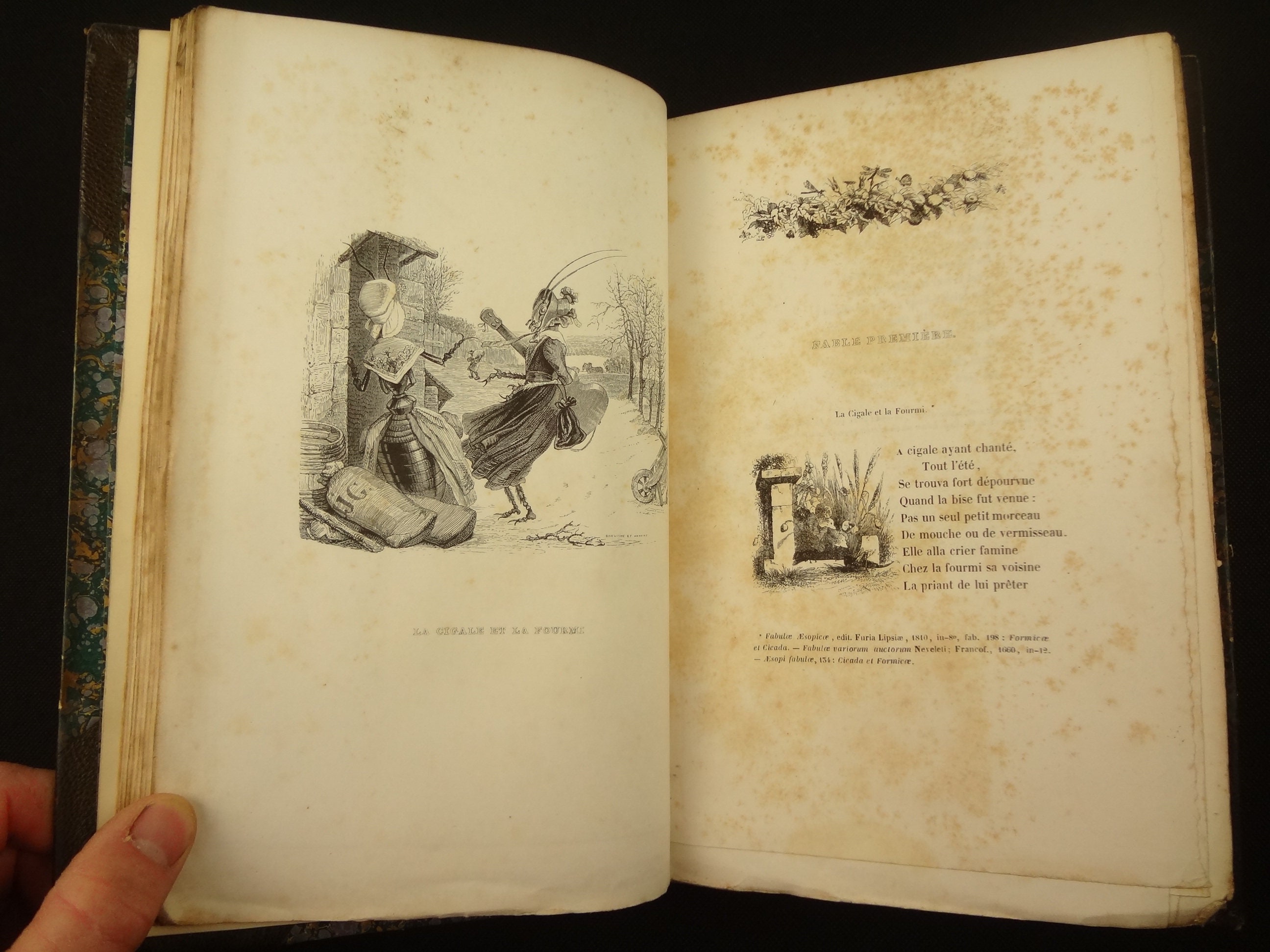 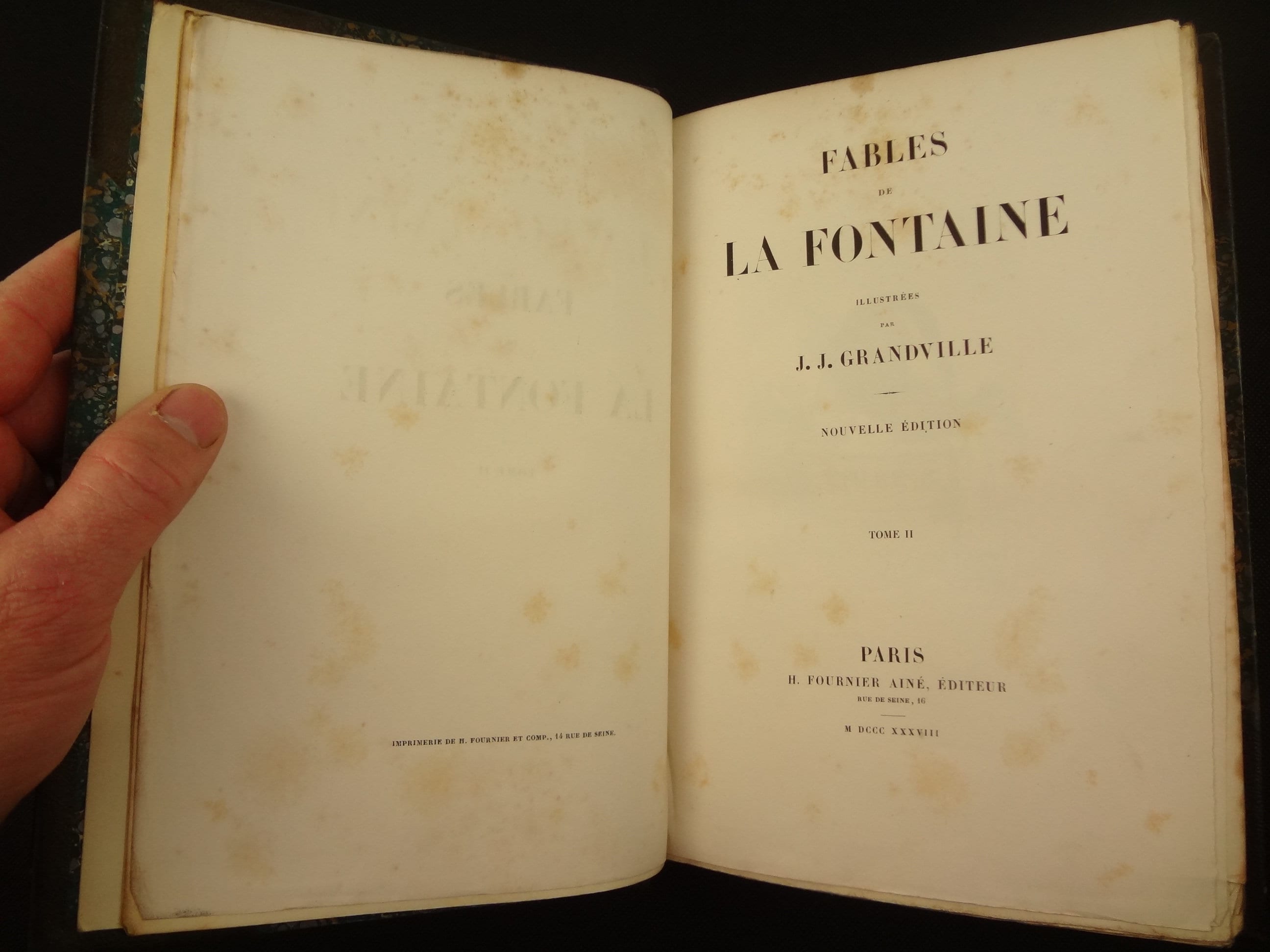 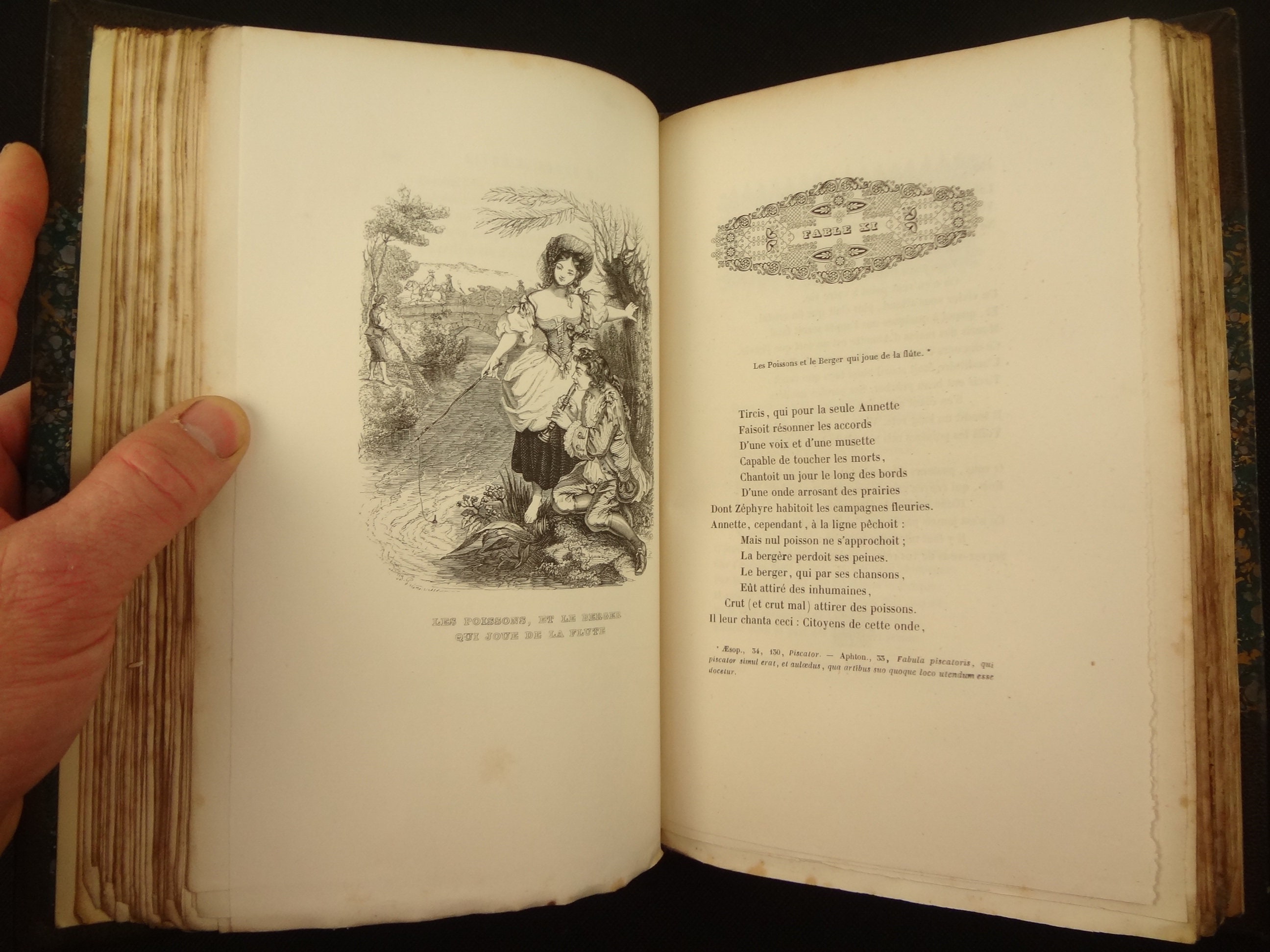 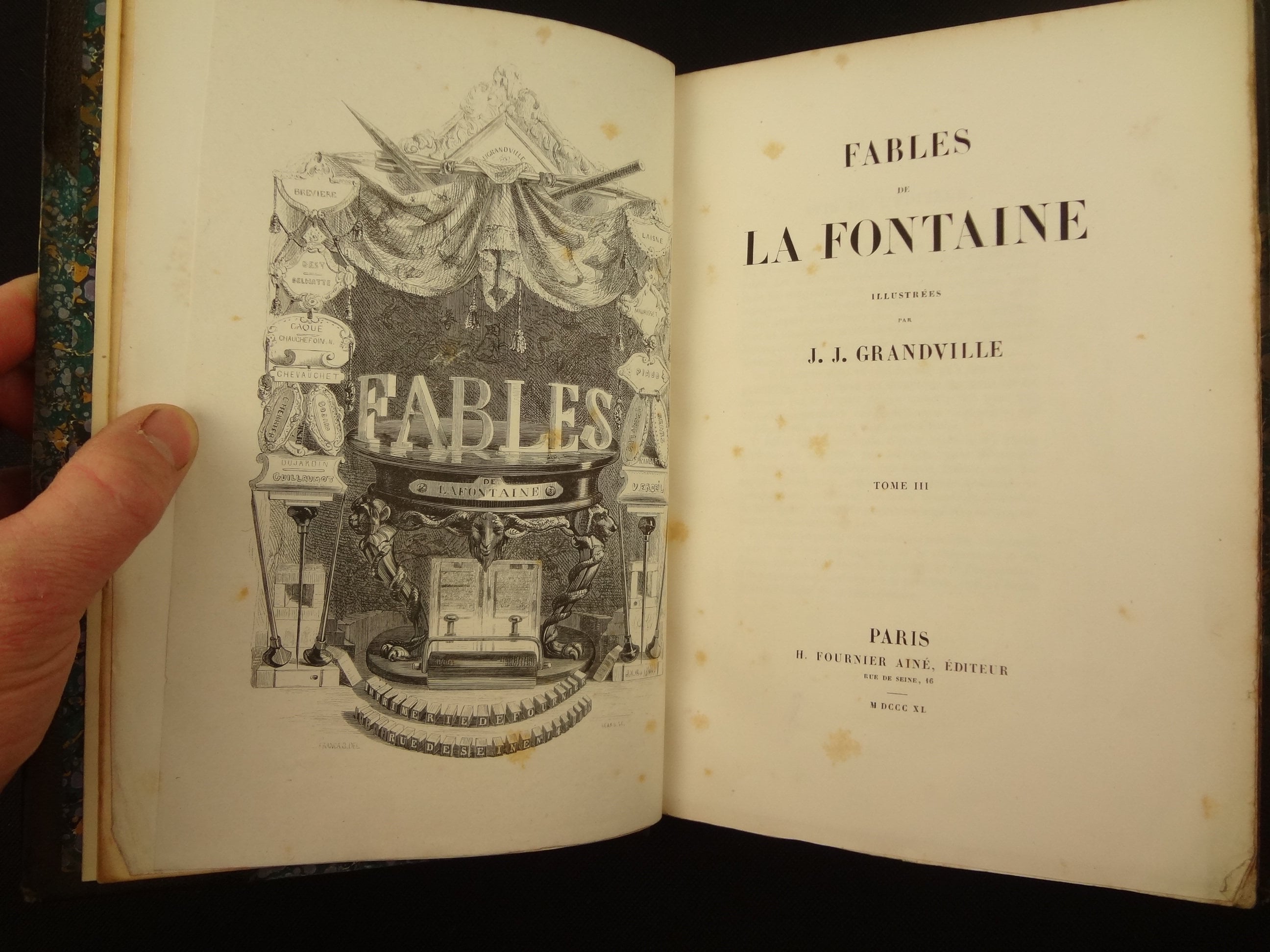 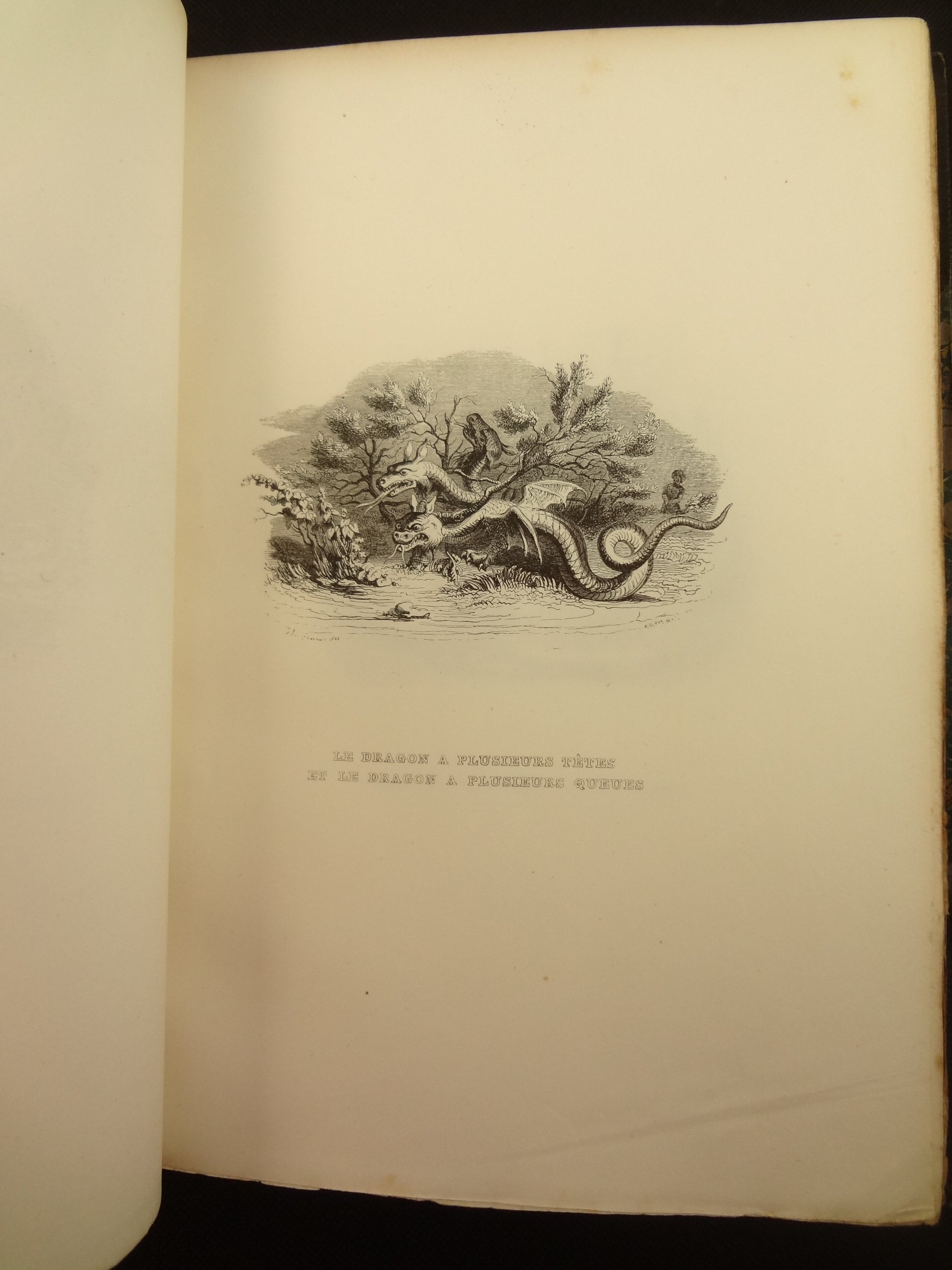 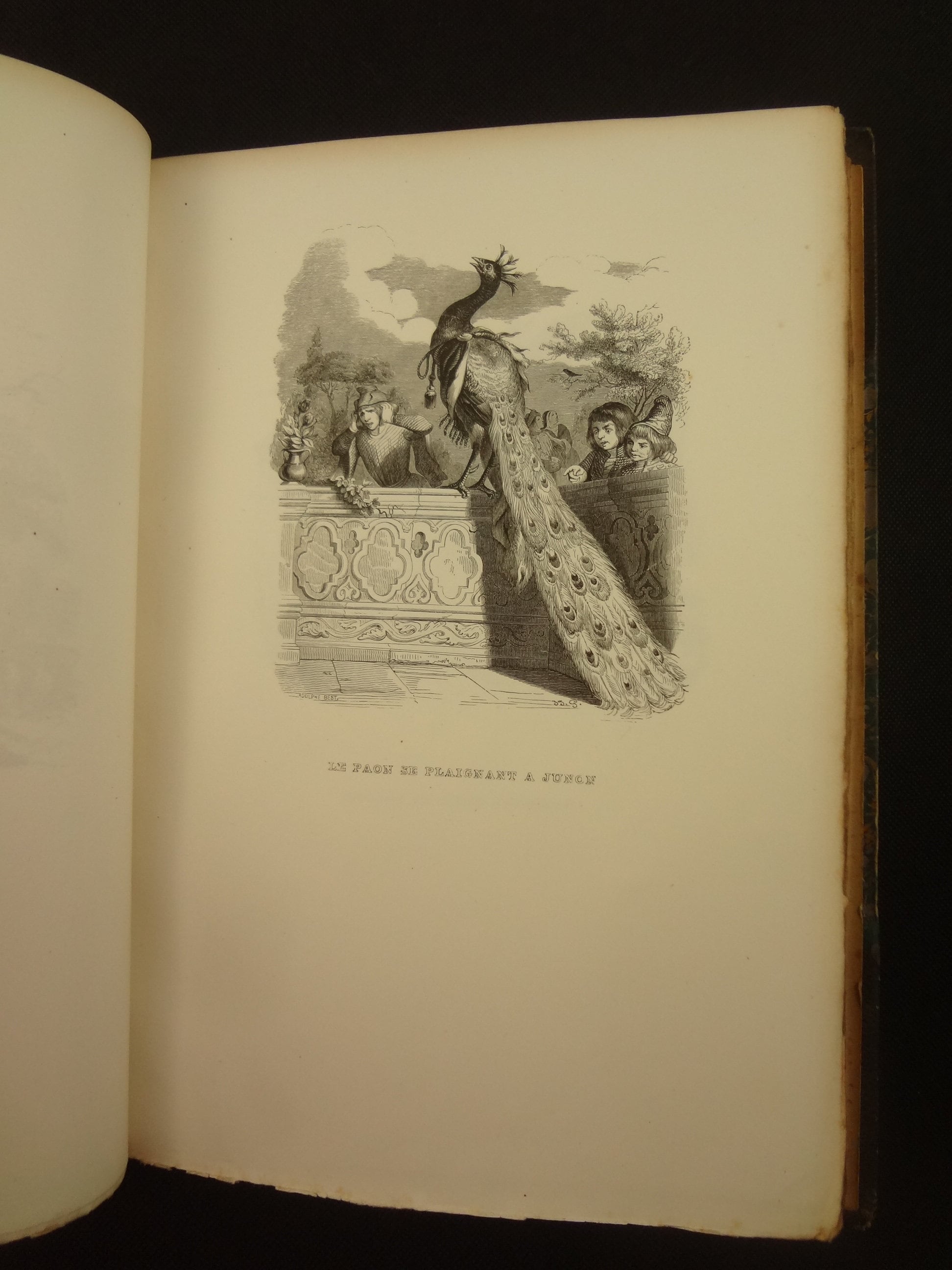 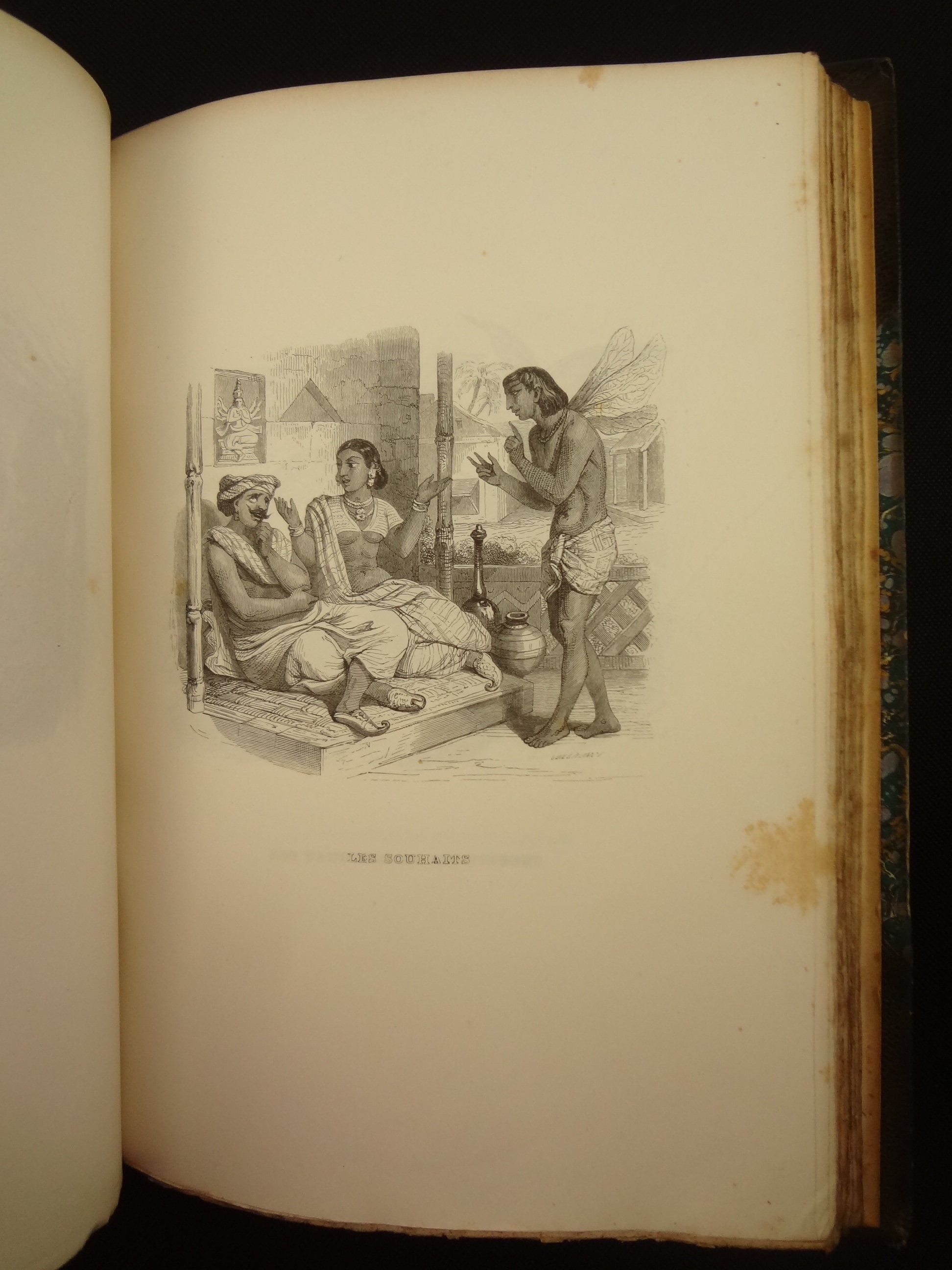 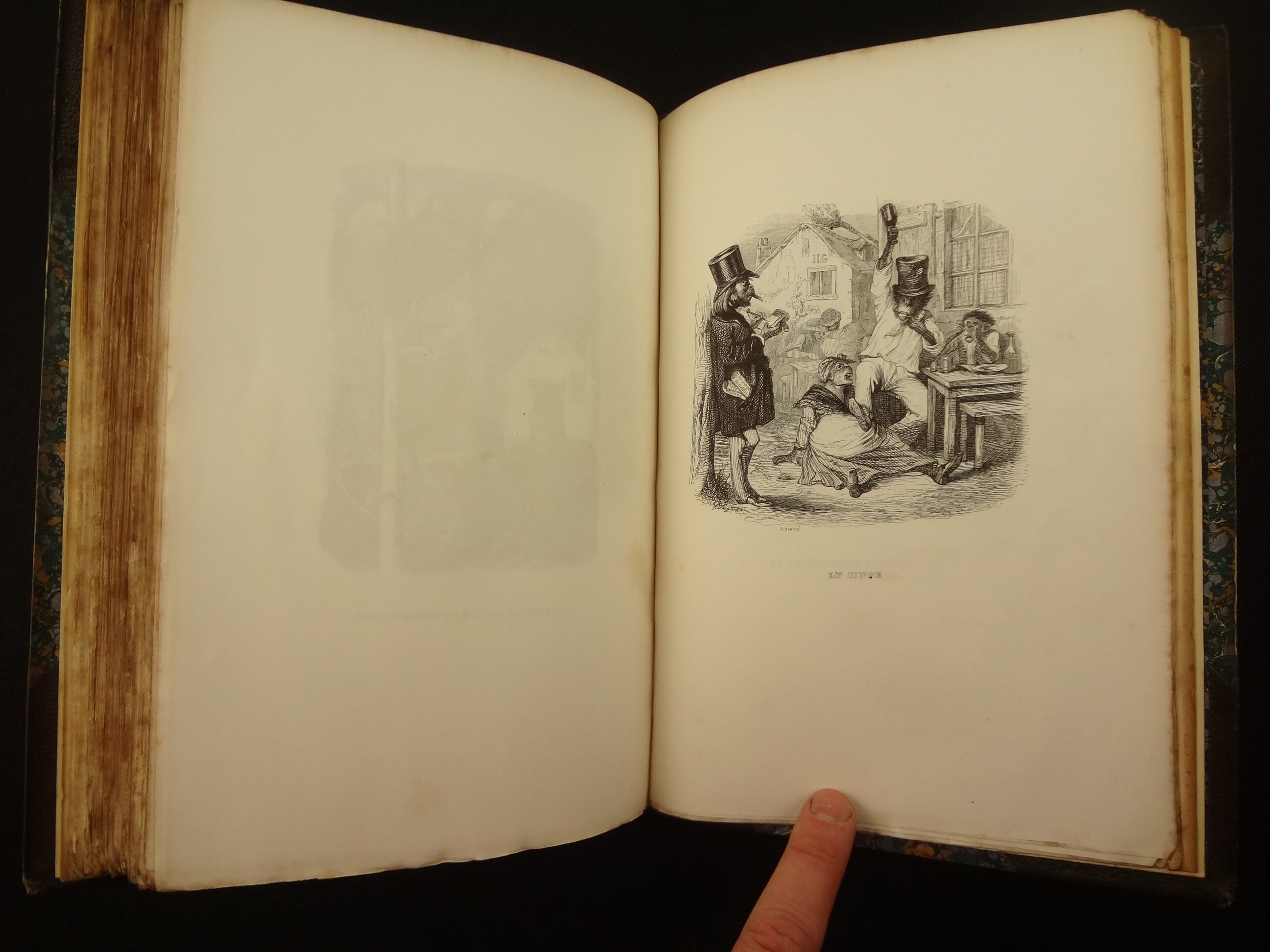 Complete, bound-to-match, three volume, first edition set of the Fables de la Fontaine, as illustrated in 240 plates by J.J. Grandville; the third volume, 120 plates (completing the work with a Grandville illustration dedicated to each fable), was completed in 1840 and issued as a supplement; it is quite rare.

The Rarity of Tome III -

Translated - "Tome III, it is framed; the ornamented back bears the date 1840. This volume-album of 120 new engravings, published in 52 deliveries under yellow covers, is the essential complement to the 1838 edition which thus forms a beautiful set, of the greatest rarity in first edition."

It seems unlikely that there were only 52 copies produced. I don't think I fully understand what Carteret was stating.

About Fontaine's Fables (in extreme brief) -

Jean de La Fontaine collected fables from a wide variety of sources, both Western and Eastern, and adapted them into French free verse. They were issued under the general title of Fables in several volumes from 1668 to 1694 and are considered classics of French literature. Humorous, nuanced and ironical, they were originally aimed at adults but then entered the educational system and were required learning for school children.

Though the designs of Grandville are occasionally unnatural and absurd, they usually display keen analysis of character and marvellous inventive ingenuity, and his humour is always tempered and refined by delicacy of sentiment and a vein of sober thoughtfulness. He suffered increasingly from grave mental problems and died on 17 March 1847. He is buried in the Cimetière Nord of Saint-Mandé just outside Paris.

Per Leopold Carteret (Epoque Romantique, Livres Illustres du XIXe siecle, 1927, p. 357-9) there were two print runs of the first editions of volumes 1 and 2; this volume 1 and 2 are from the second run, with Fournier as printer and a chess board design at the xiii V1 initial.

Tome III was produced after the success of the first two. In the first two volumes Grandville's illustrations only accompanied half the fables. The 1840 Tome III is simply 120 plates, for the fables that lacked illustration in volumes 1 and 2.

The Avid de L'Editeur, in Tome III, states (translated), "The illustrations of La Fontaine's Fables by M. Grandville received the most favorable reception from the public. The many admirers of the poet have found in the artist's compositions the interpretation, as ingenious as it is skillfully rendered, of the moral sense of the fable; with younger readers or those less familiar with the inimitable productions of the fabulist, the application of customs and customs in real life has been a powerful aid to the intelligence of allegory."

"…By delivering this new collection to the public, we dare to hope that in terms of composition and design, as well as those of engraving and printing, they will judge it, if not superior to the first, at least equally worthy of its goodwill."

See pictures. Bindings have some wear at edges, sunning to spines, and a little rubbing.

Unfortunately, foxed throughout all three volumes; some pages worse than others, see pictures. Many bookseller notes on blank front unpaginated endpapers of V1. Text block not trimmed, just opened, volumes 1 and 2 have varying margins since the type leaves were smaller than the plates; this maintained the size of the plates. Some of the leaves have a chipped edge or corner due to opening. Occasional dog-eared page. Occasional moisture mark at the bottom edge of the type plates, no text affected. V1 from 104 to end tip of top corner missing (mouse nibble?).

Upper-corner chip to tip throughout V2 and V3 also; perhaps they were stacked before being bound.