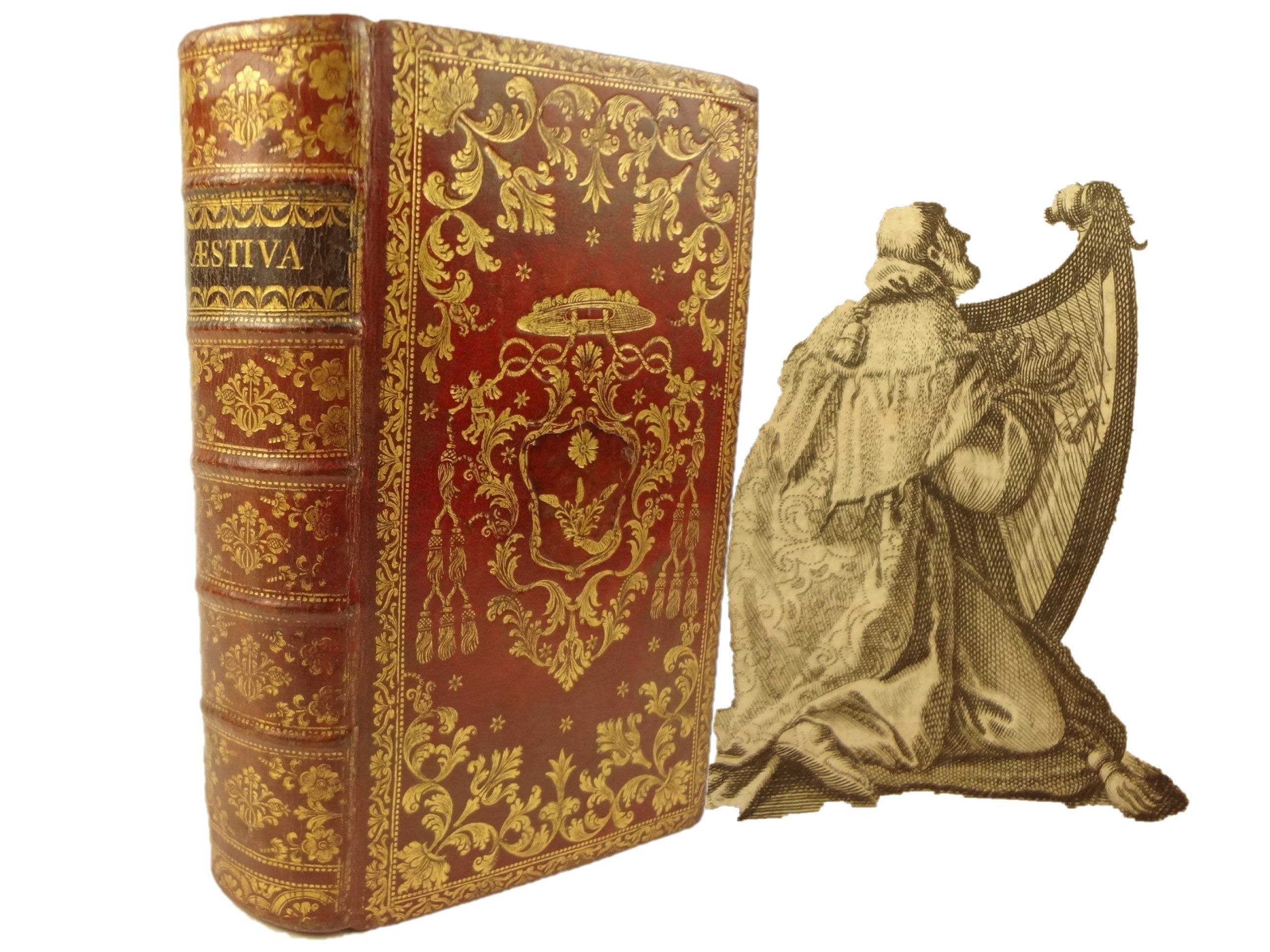 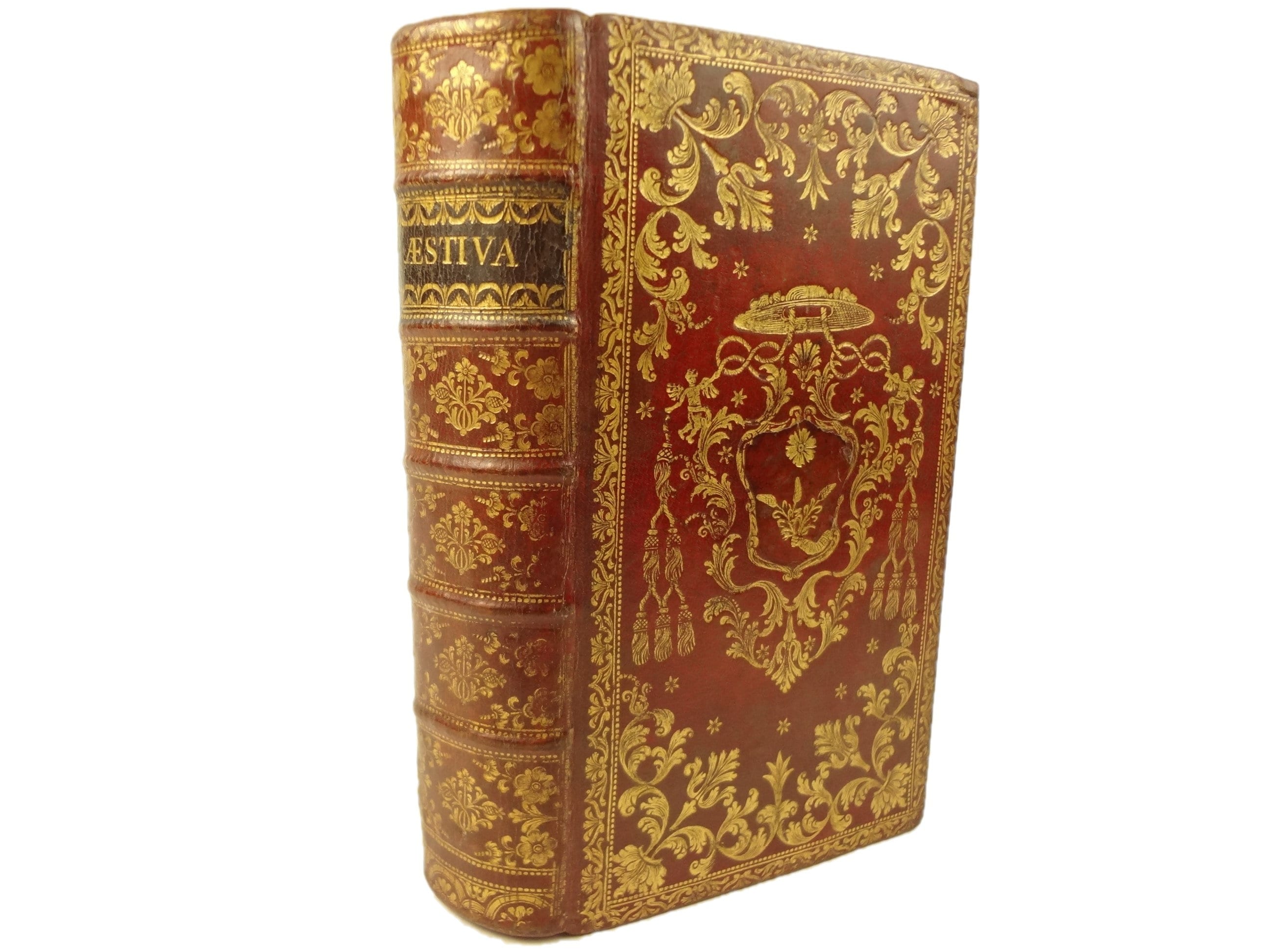 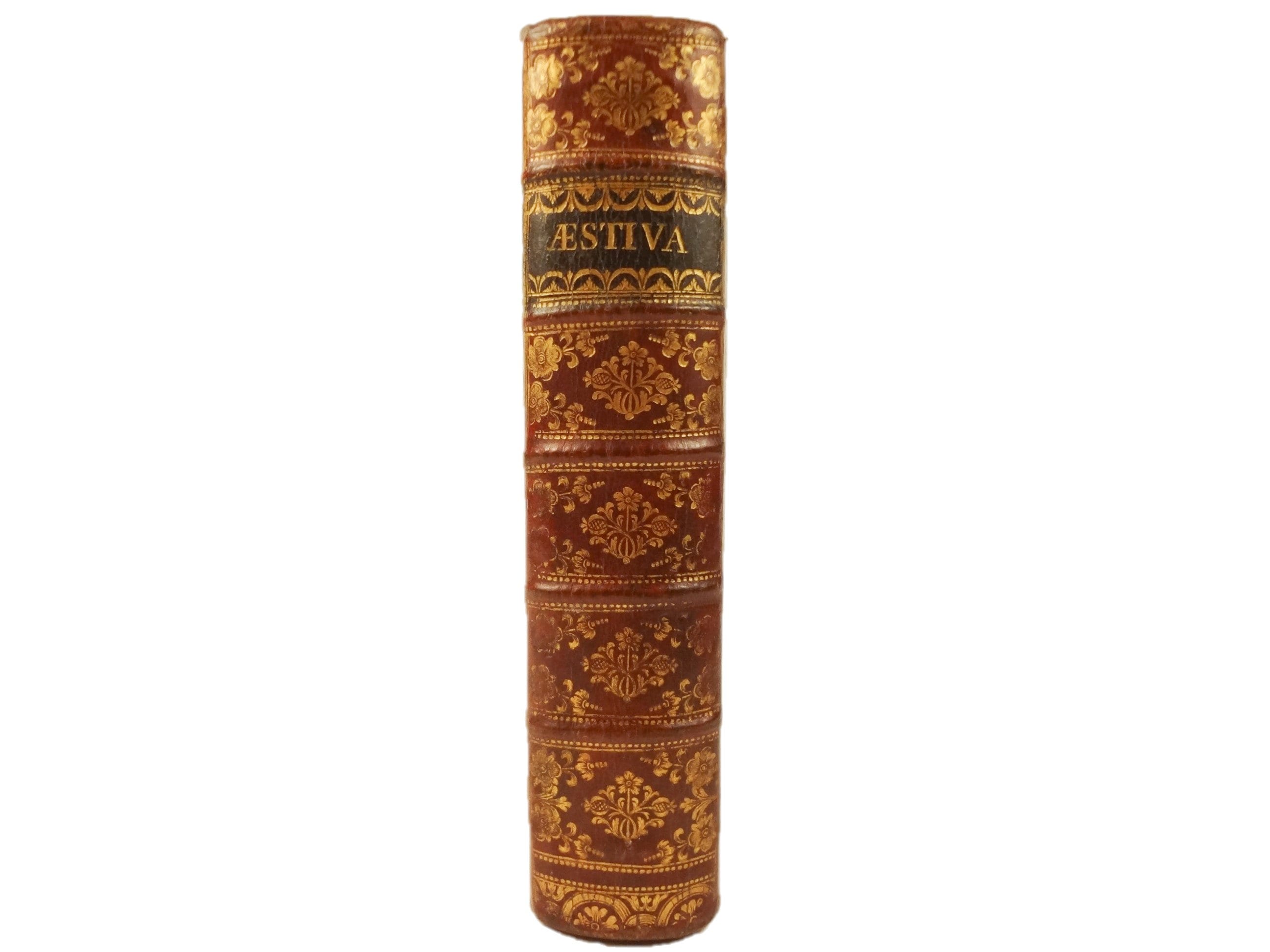 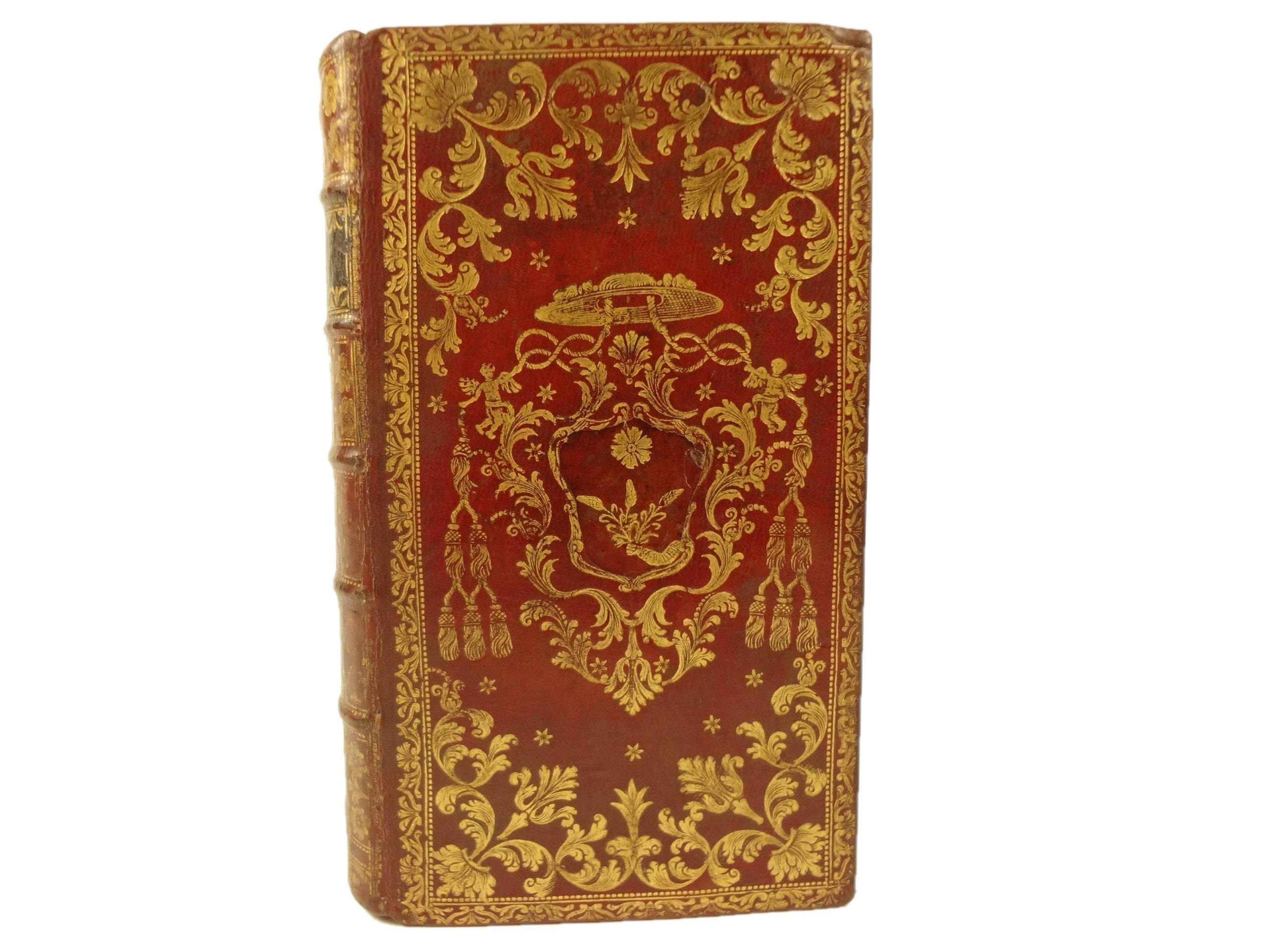 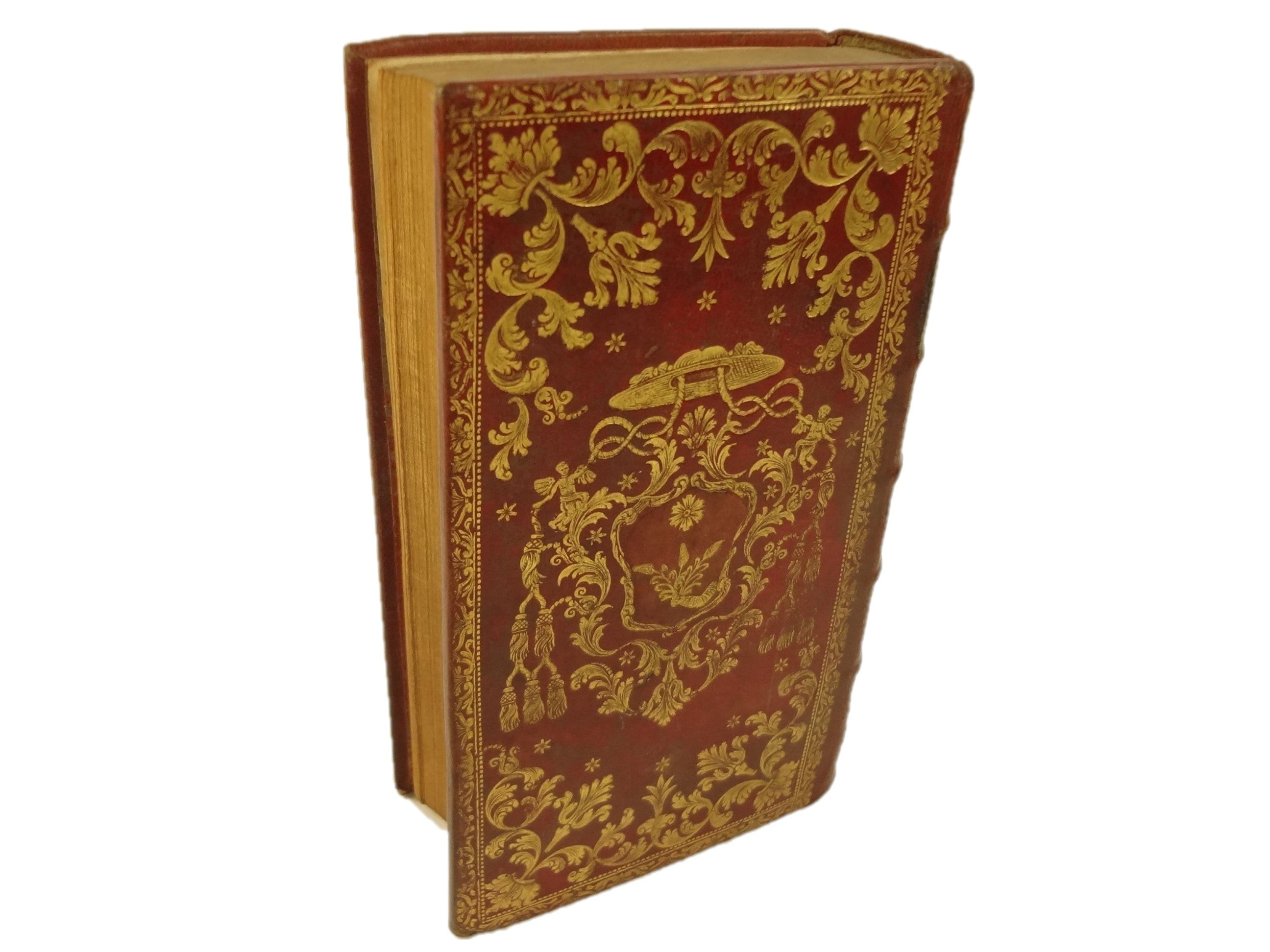 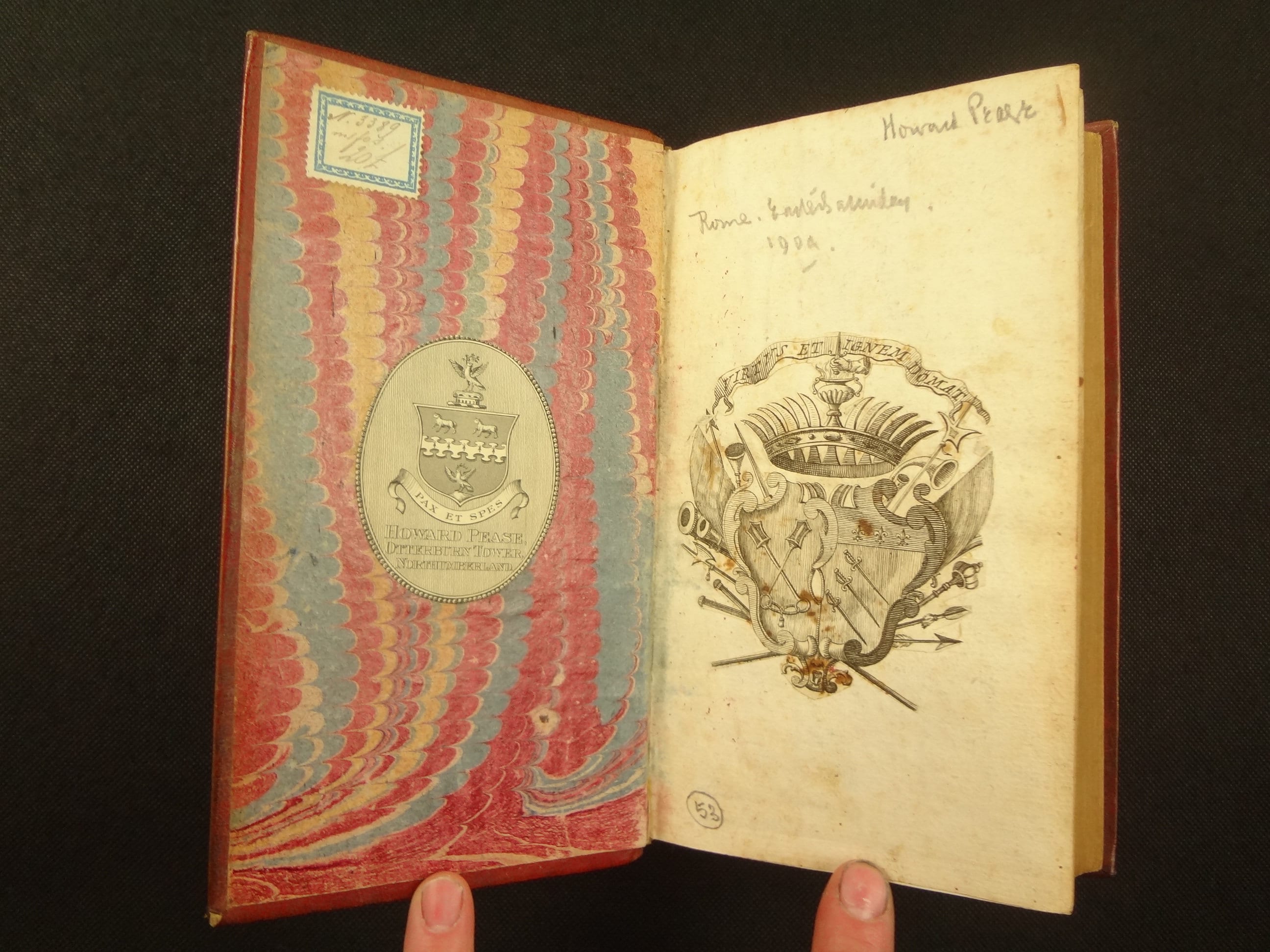 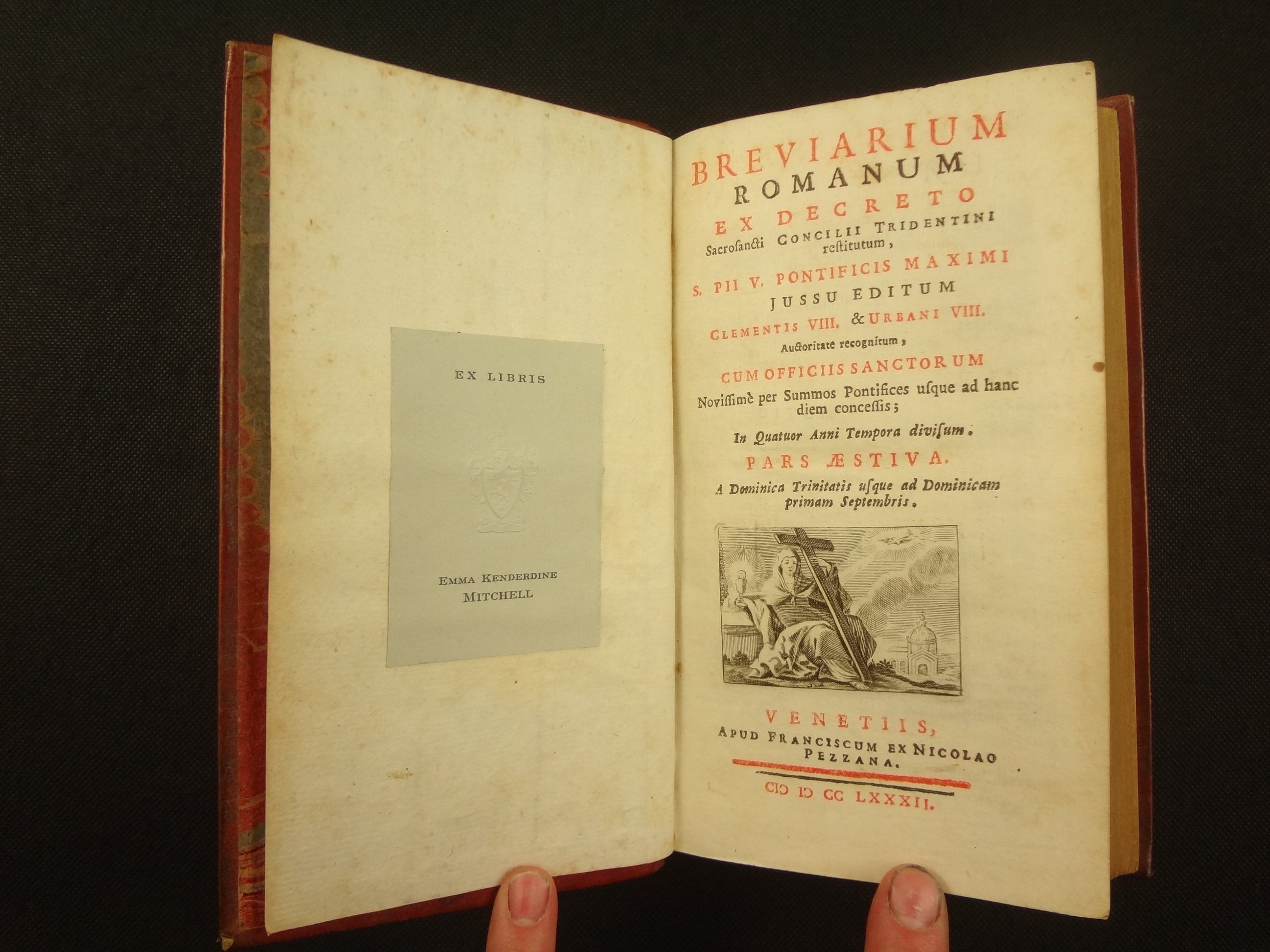 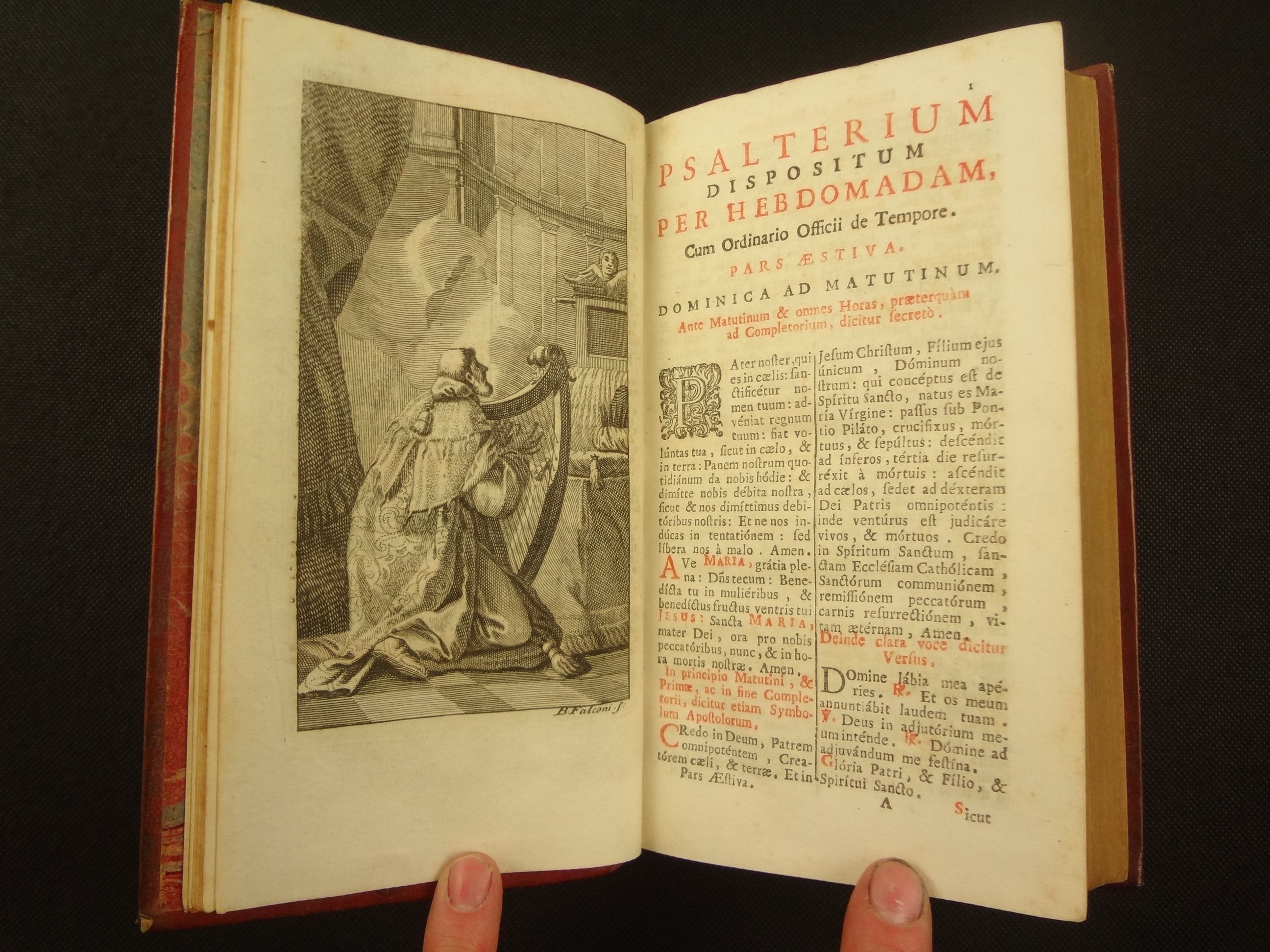 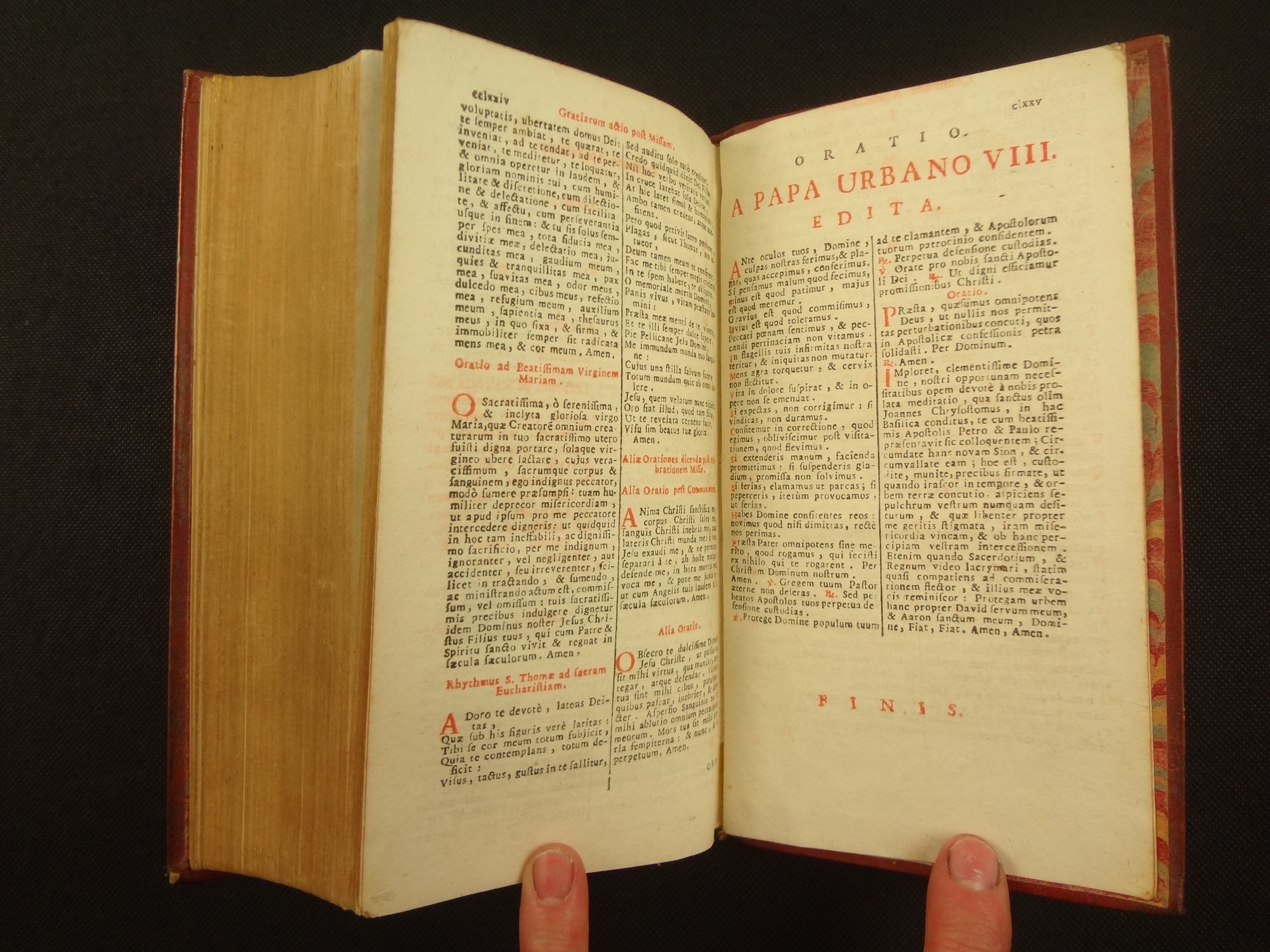 An interesting note, the arms at the center of the ecclesiastical hat are an overlay. Was there an earlier owner, or did the binder prepare the arms blank, with the intention of the arms being added later? This could be worth some scholarly study, even if only to rediscover what was known before.

I've searched and searched for arms with a flower over an arm holding (barley?), but to no avail.

Rough translation - SUMMARY OF THE ROMANS restored from a decree of the Holy Council of Trent, S. Pius V. Pontifex Maximus Jessu, edited by Clement VIII. Urbani VIII Authorized revised, with the Office of the Saints most recently granted by the Sovereign Pontiffs up to this day; The Summer Season is divided into Four Seasons. From the Trinity Sunday until the first Sunday of September.

Edward Pease, of Otterburn Castle, inserted his ex-libris on the pastedown. Oddly, an engraved copy of the arms of the Muti family, of Italy, are pasted to the 1st blank unpaginated page, with their motto, "Virtus et Ignem Domat"; on the verso of this leaf is the modern ex-libris of Emma Kenderdine Mitchell.

Each volume measures approx. 19.5 x 11 x 4 cm. Red morocco binding in the 18th century French style. Boards with an outer frame made of a leafy roll, gilt fillet, and dentelle roll; within the frame are leafy gilt tools radiating out to the center ecclesiastical arms with the hat and tassels (in this example, cherubs hold the tassels) holding the arms. Spine with five raised bands; five compartments with a gilt central flowering tool, and the corners with gilt flowers, one compartment with "AESTIVA" in gilt on black morocco. All edges gilt. Printed in red and black. Printer's mark on title page. Three full-page woodcuts. Printed in two columns. Some decorative touches like tailpieces and initials.

See pictures. Upper-front corner lightly bumped. Binding very lightly worn, with perhaps only a little gilt loss and a touch of wear at the front bottom corner. Interesting, but the arms at the center of the shields are onlays. The book was bound without the marbled endpapers forming flyleaves, but there is not damage at the gutter/hinge and it looks like it was designed this way. Library ticket and ex-libris of Edward Pease on pastedown. Blank unpaginated front endpaper with several Pease notes (including his name) and a cutout and pasted in arms, the verso also has a modern ex-libris of Emma Kenderdine Mitchell. Title page has one spot (at fore-edge, and some light foxing in the paper. There's occasional toning, light foxing throughout the work, not uncommon to paper of this period. There seems to be a (tea) spot at the fore-edge margin of 81-97, no text affected, approx 1 cm at most. Thumb on 215 fore-edge margin. Last gathering's bottom corner just barely bumped/slightly dog-eared.