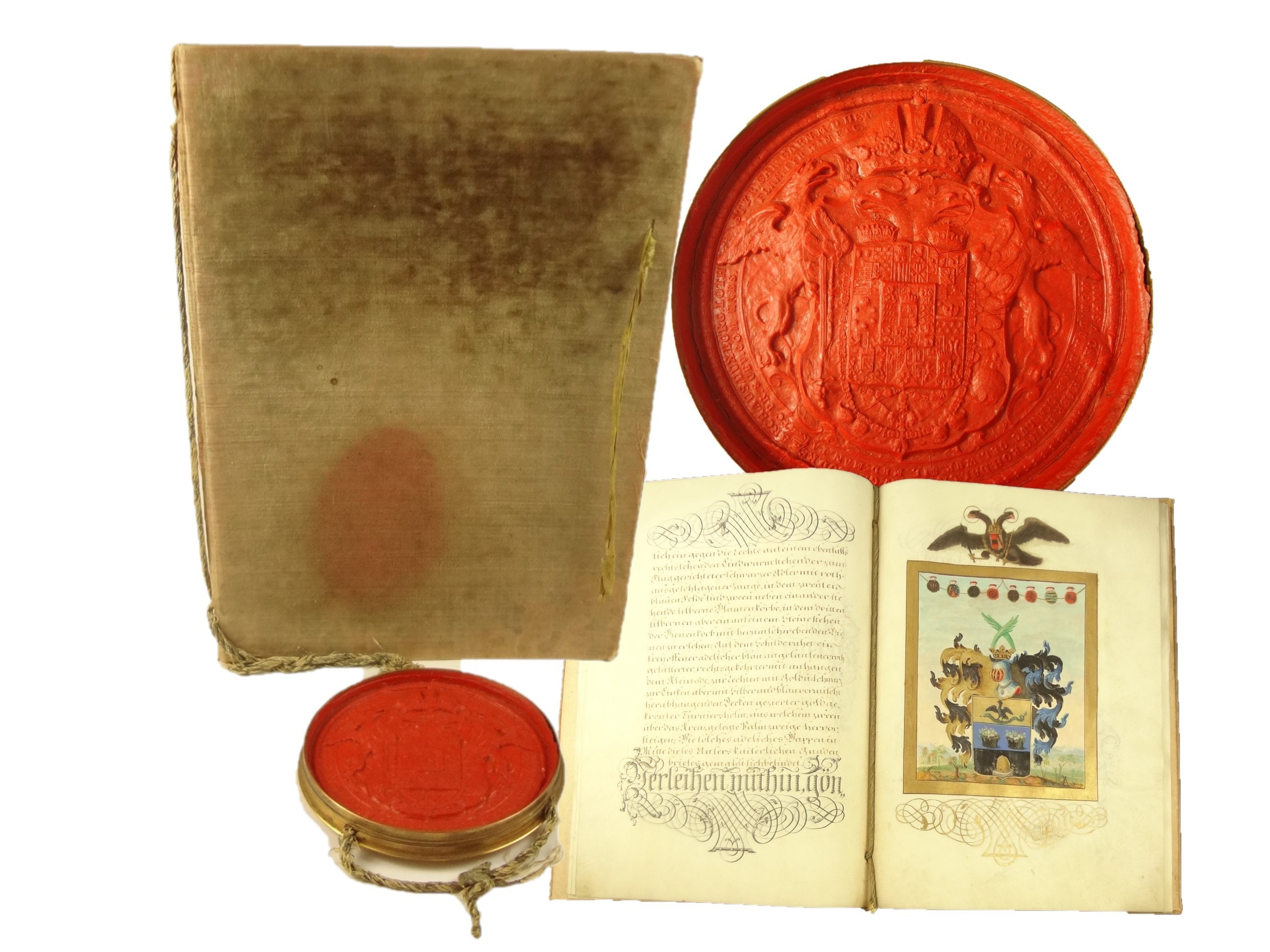 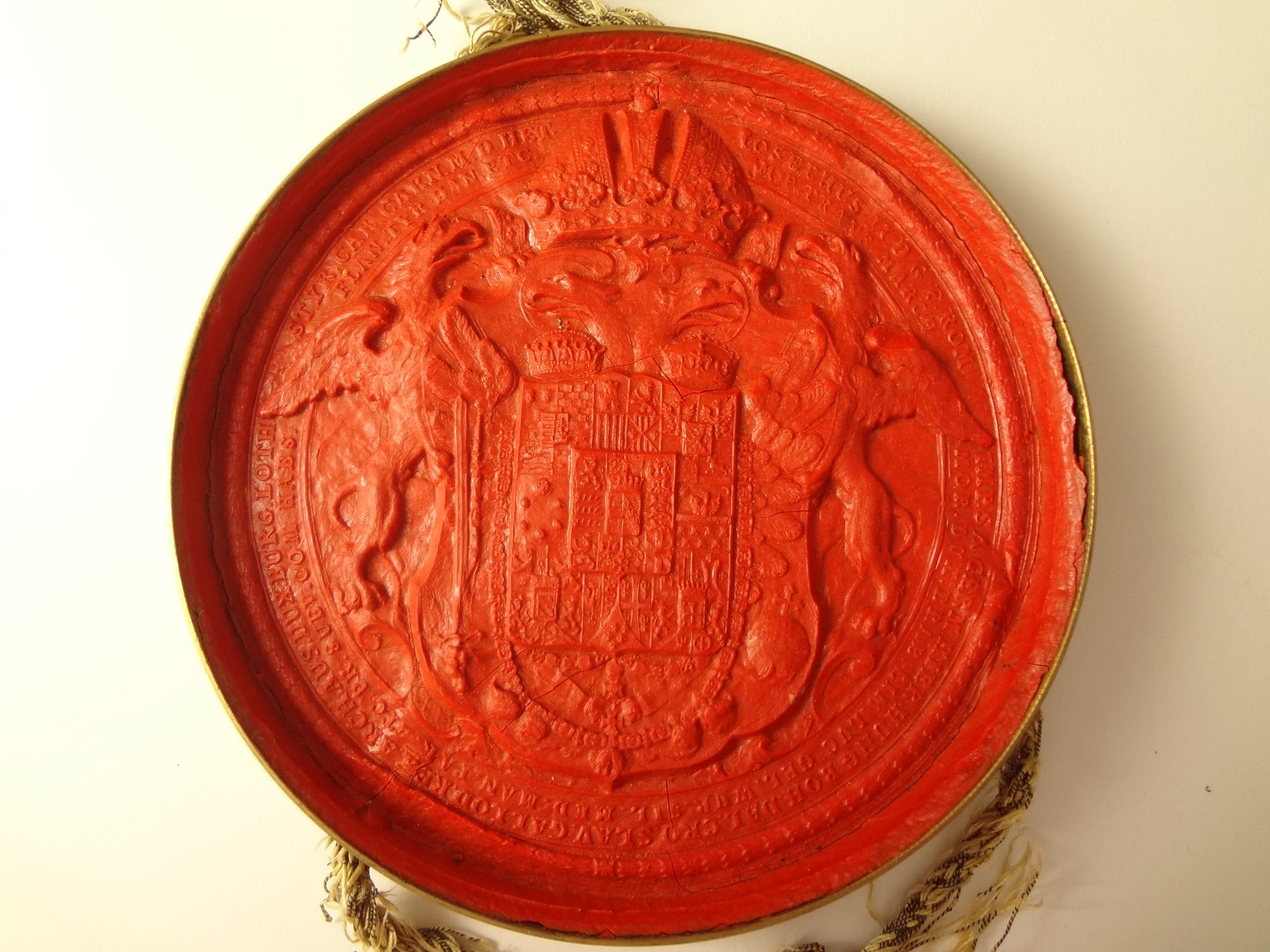 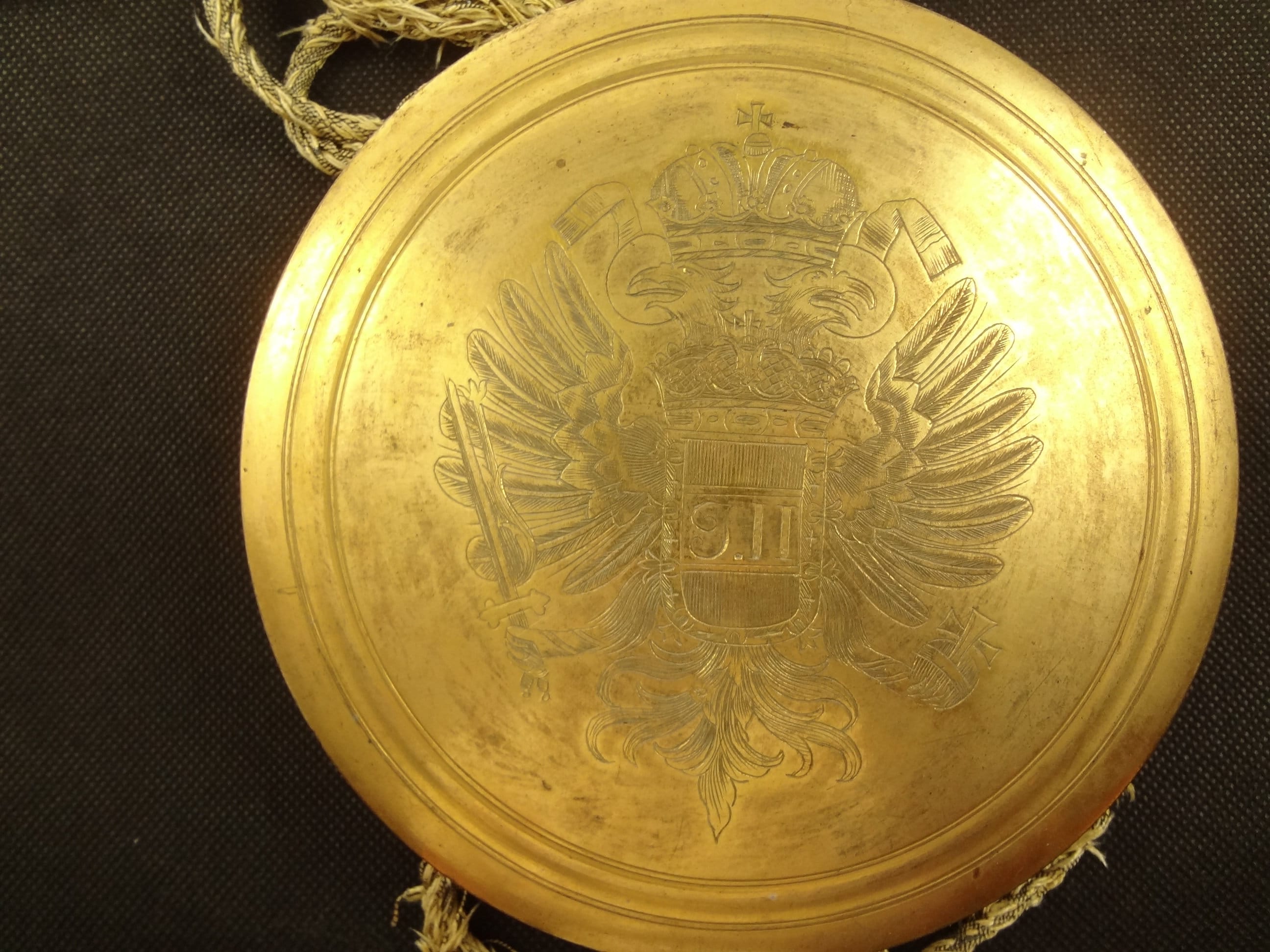 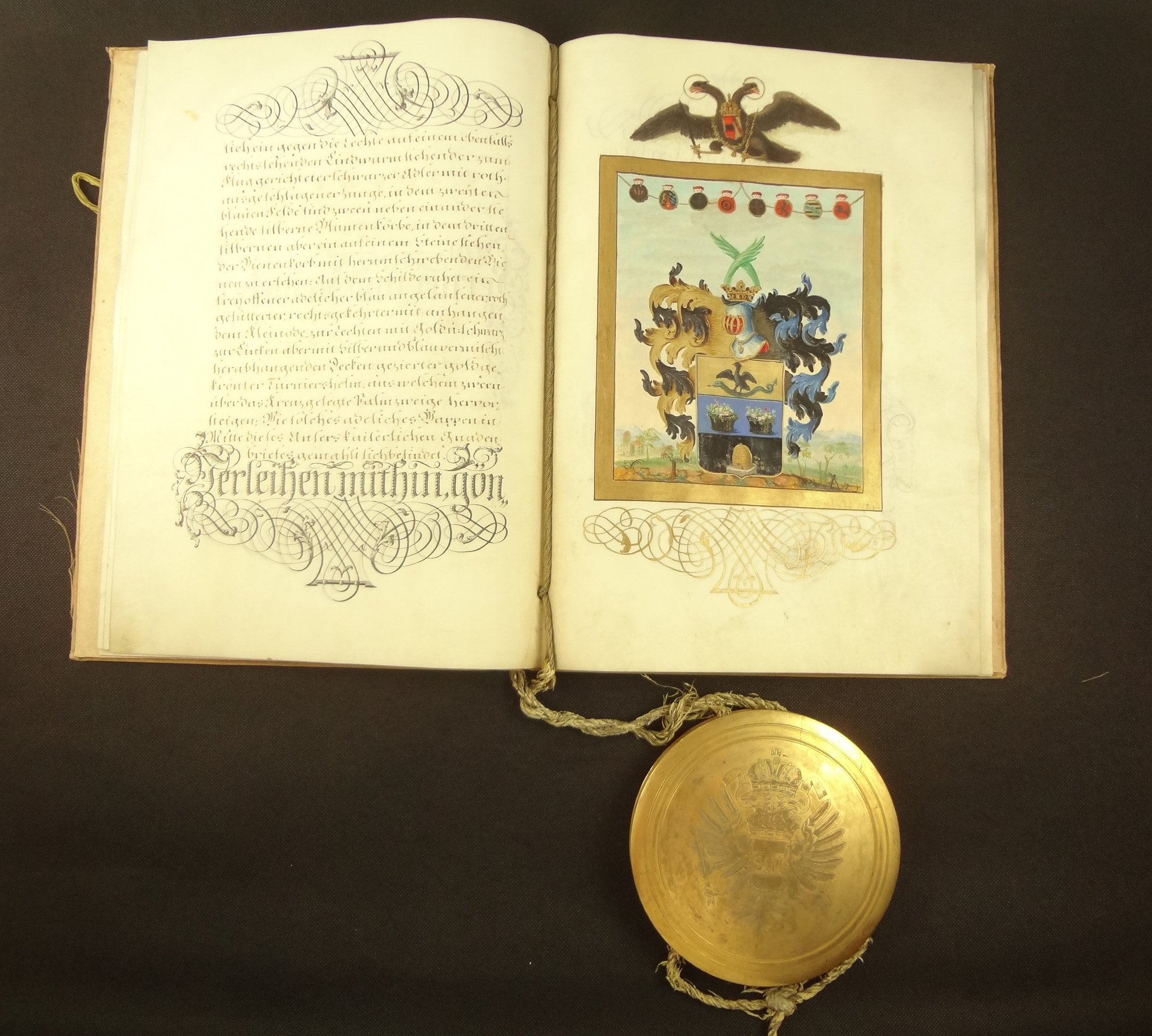 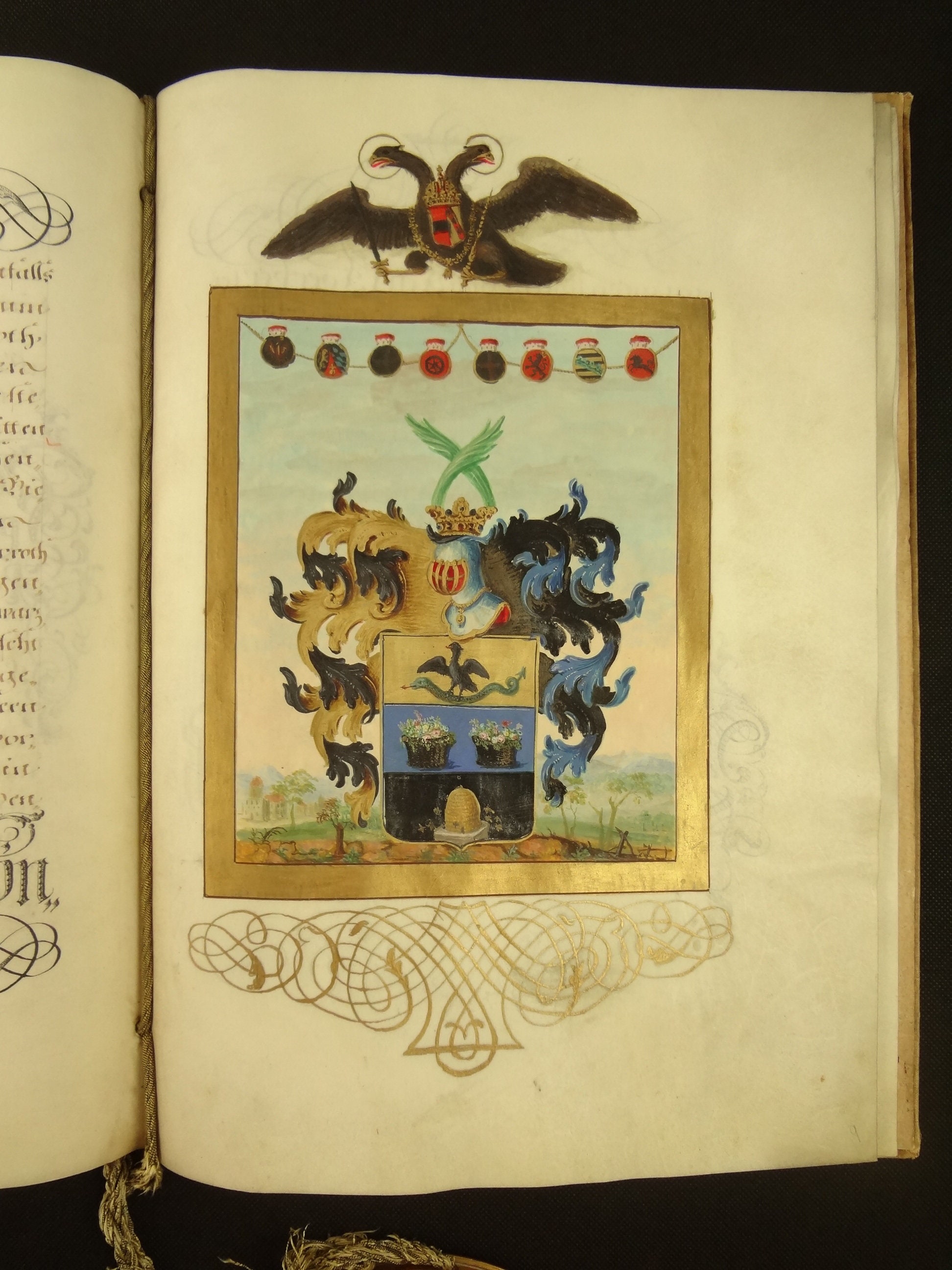 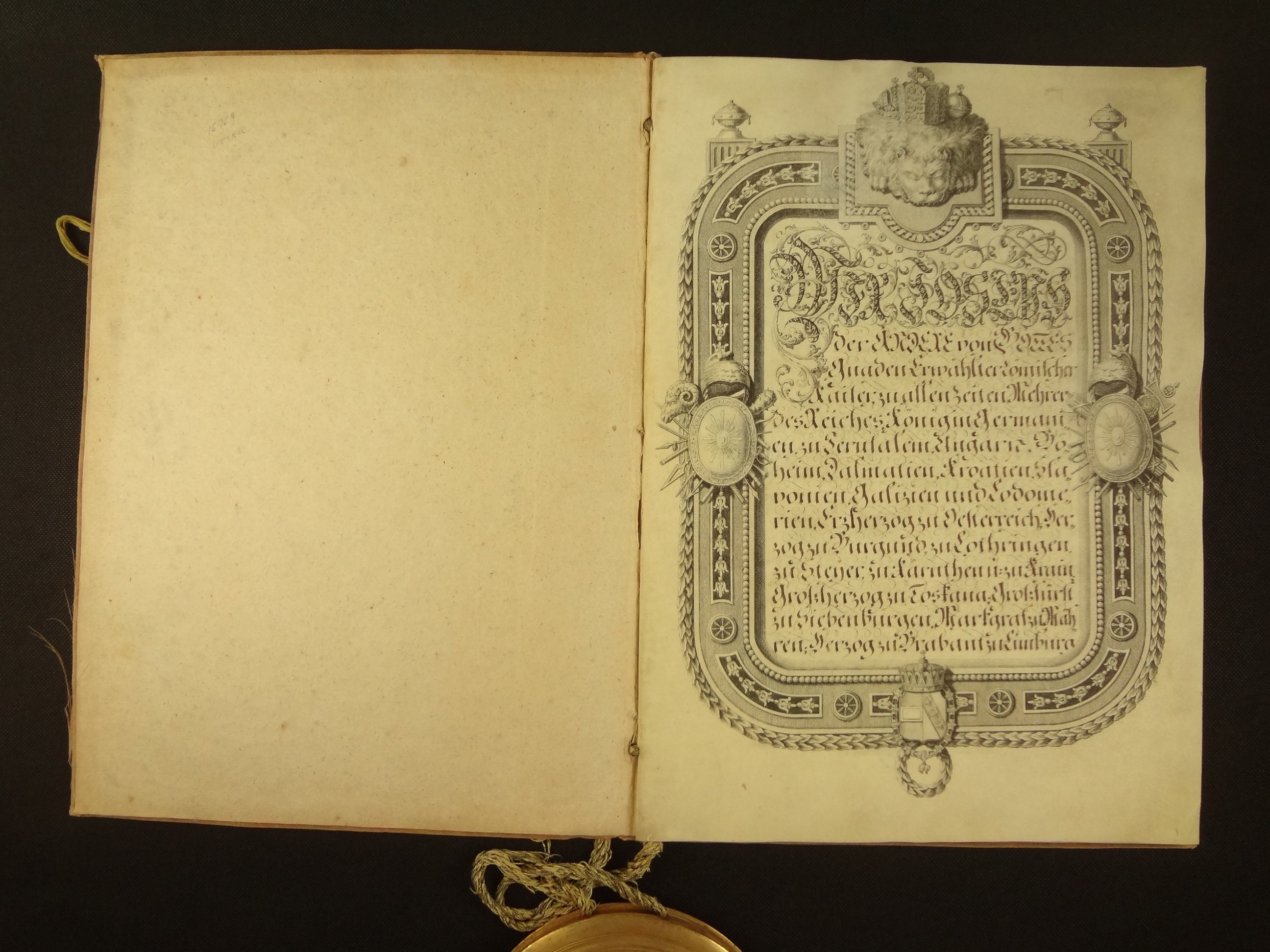 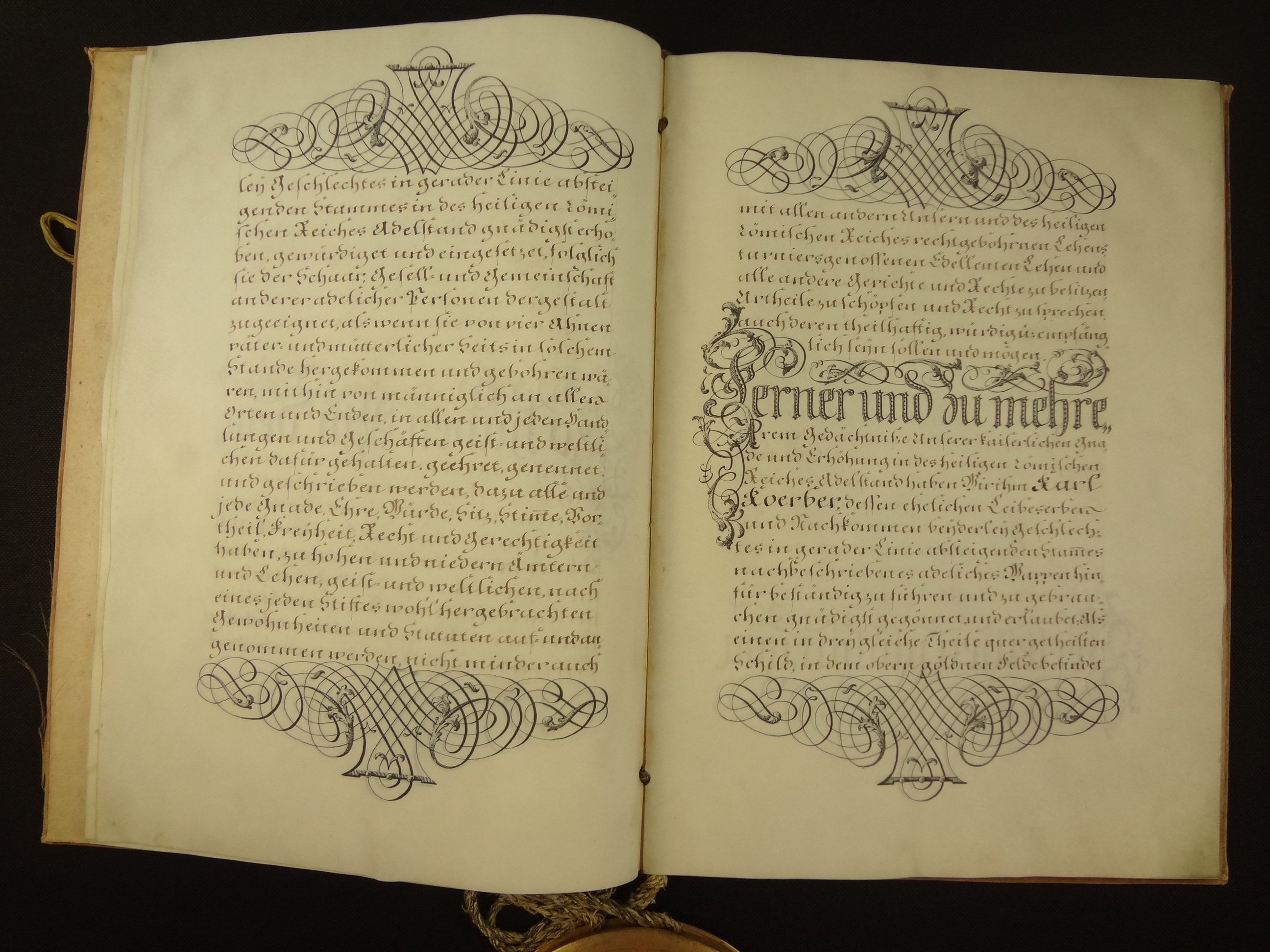 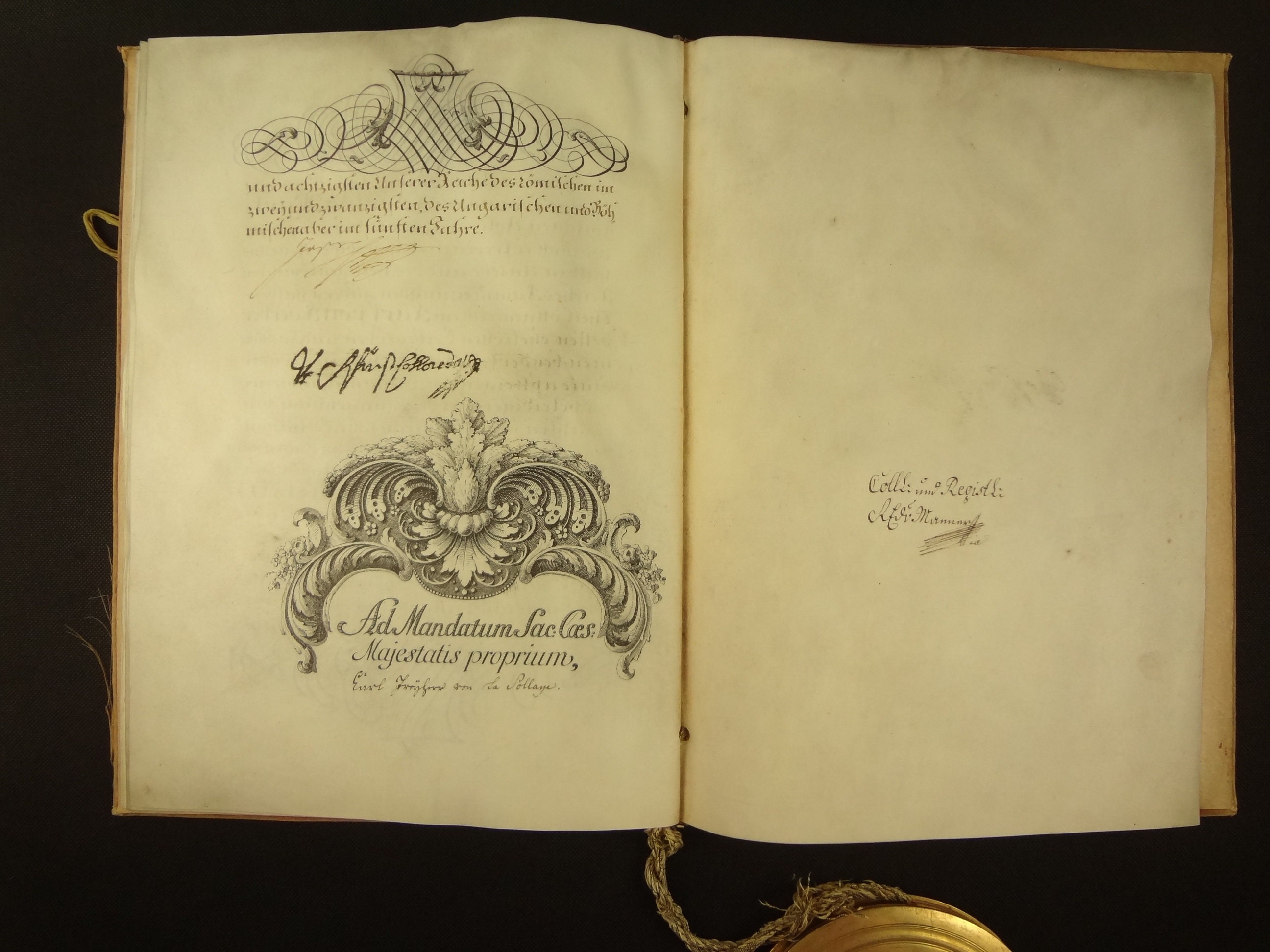 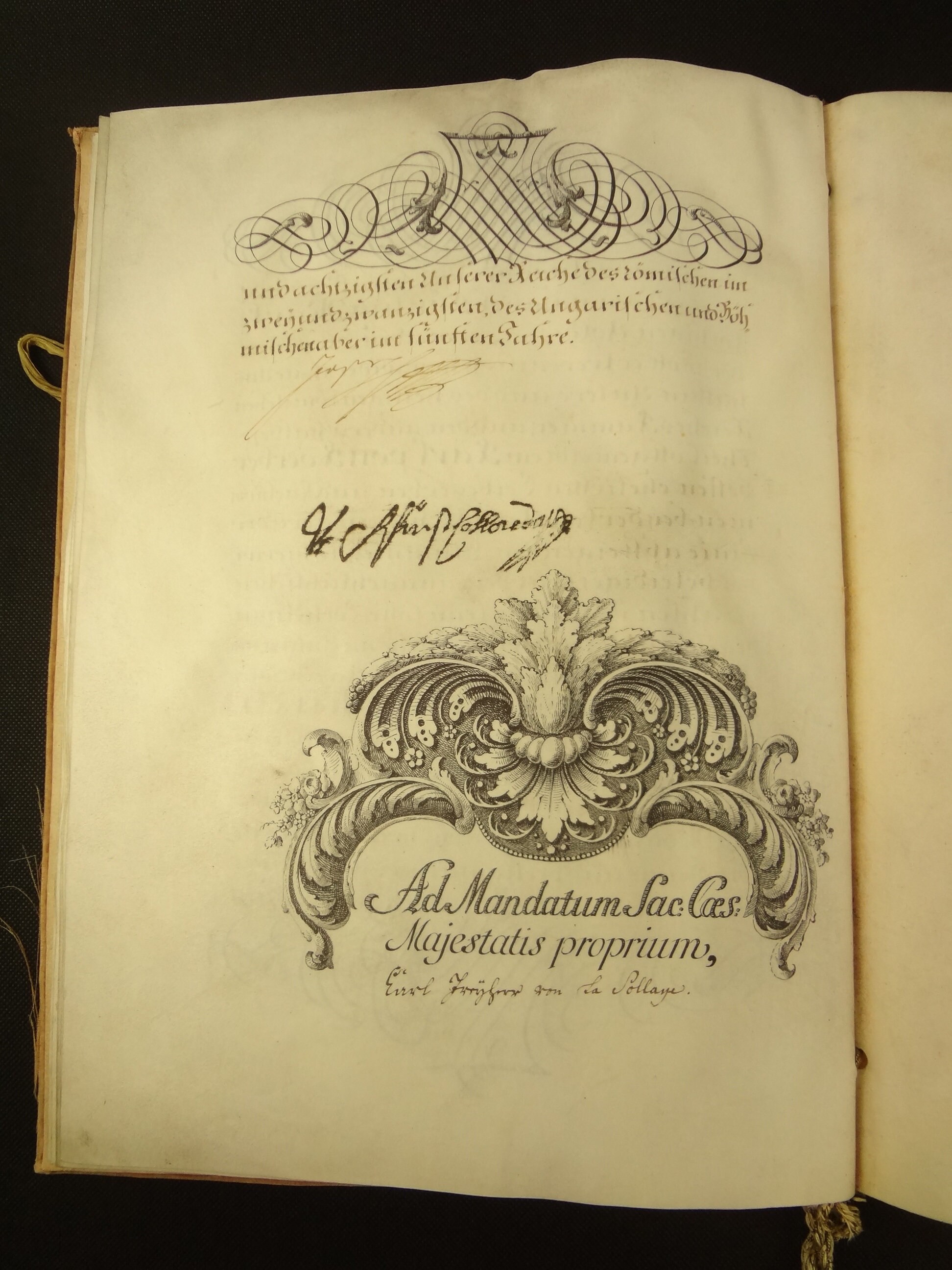 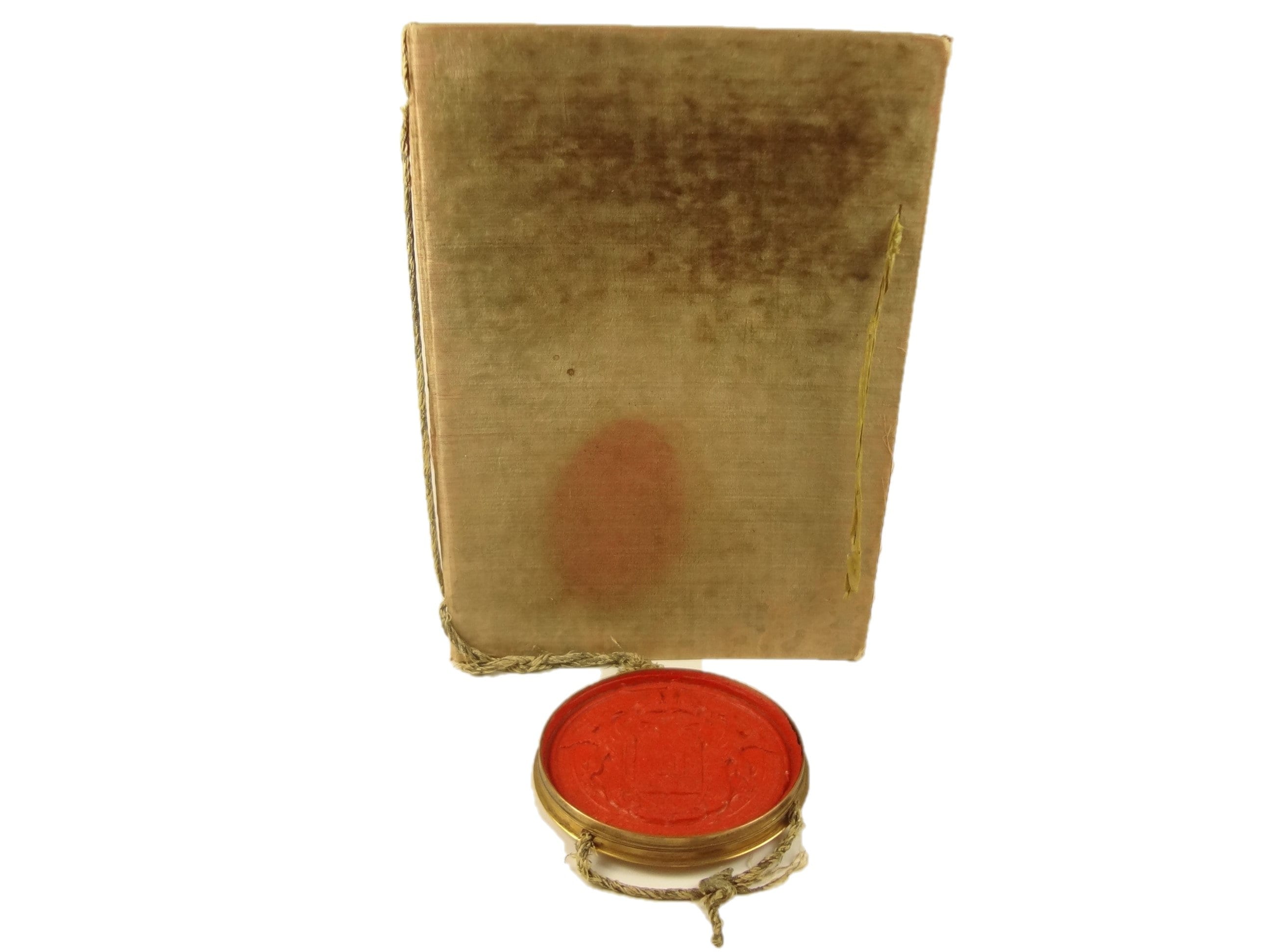 A large wax seal of Joseph II, Holy Roman Emperor, protected in a brass container (engraved with the emperor's arms), affirms this 1785 patent of nobility for Karl Koerber.

The patent includes the von Koerber heraldic arms hand-painted and illuminated (gold paint applied). The Hapsburg double-headed eagle is painted at the top of the page. The arms include two beautiful baskets of flowers, a bird holding a snake and a beehive (bee skep) with circling bees. The arms are applied over a landscape showing a vineyard with a large (church?) in the background.

Joseph II (3 March 1741 – 20 February 1790) was Holy Roman Emperor from August 1765 and sole ruler of the Habsburg lands from November 1780 until his death. He was the eldest son of Empress Maria Theresa and her husband, Emperor Francis I, and the brother of Marie Antoinette.

Joseph was a proponent of enlightened absolutism; however, his commitment to secularizing, liberalizing and modernizing reforms resulted in significant opposition, which resulted in failure to fully implement his programs. Meanwhile, despite making some territorial gains, his reckless foreign policy badly isolated Austria. He has been ranked with Catherine the Great of Russia and Frederick the Great of Prussia as one of the three great Enlightenment monarchs.

See pictures. Some dulling and rubbing to wax seal's container. A little cracking to wax seal. Fraying to cords. Velvet very faded and worn; all but one silk tie missing. Round ghost in velvet where patent sat on top of it. One split in velvet along spine approx. 2" long. Edges and corners worn. Pencil "15759 GFIRR" on pastedown. Some thumbing along fore-edge and upper corner of 1st leaf. Pencil numbering written at bottom corner of each leaf. A little waviness to vellum. Thumbing and soiling along edges throughout. Arms caused some darkening at the back of the leaf. Year written in pencil on page numbered "13". Ghosting of signatures to facing leaf. Several spots and ink mark on verso of last leaf.