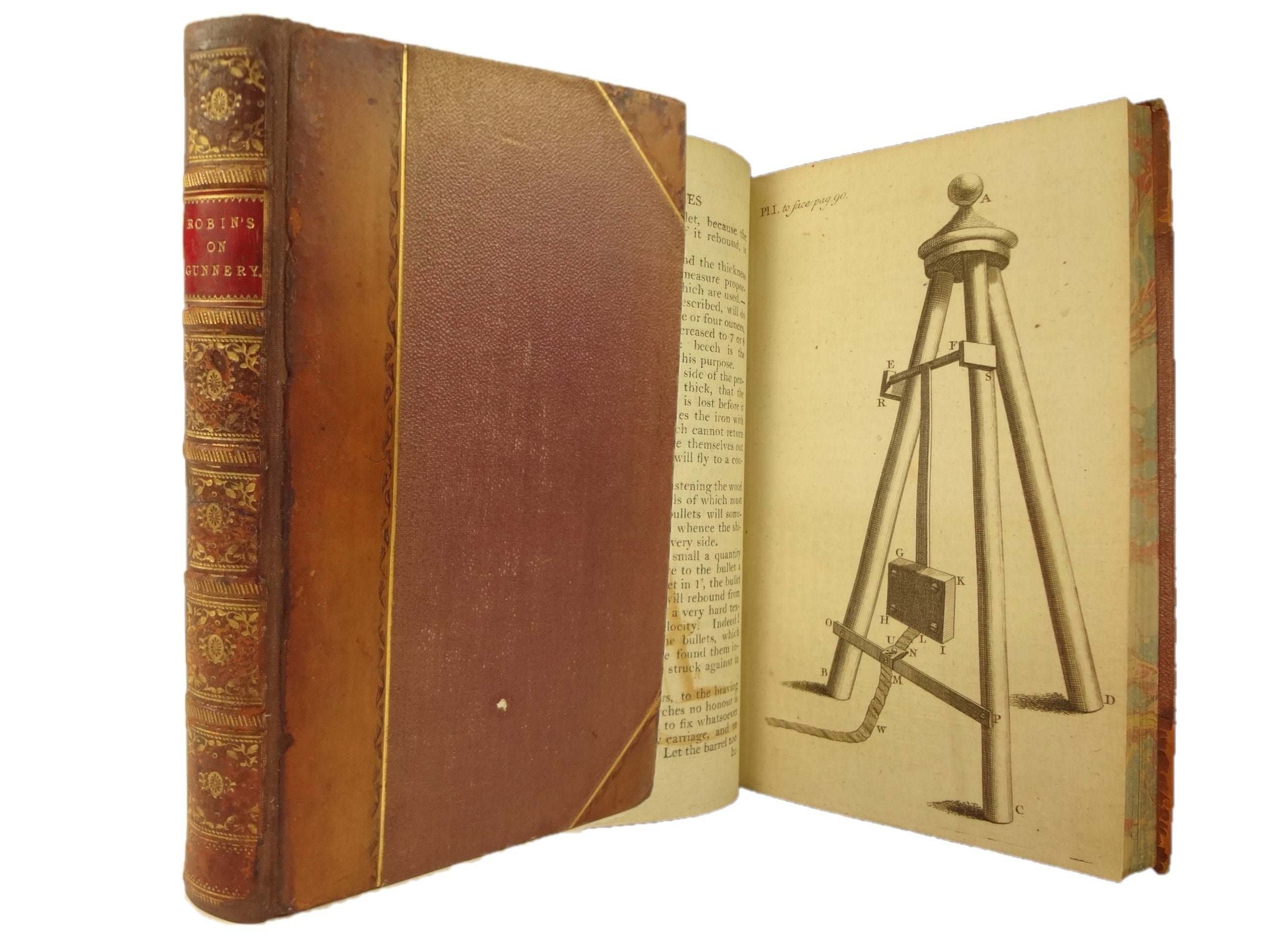 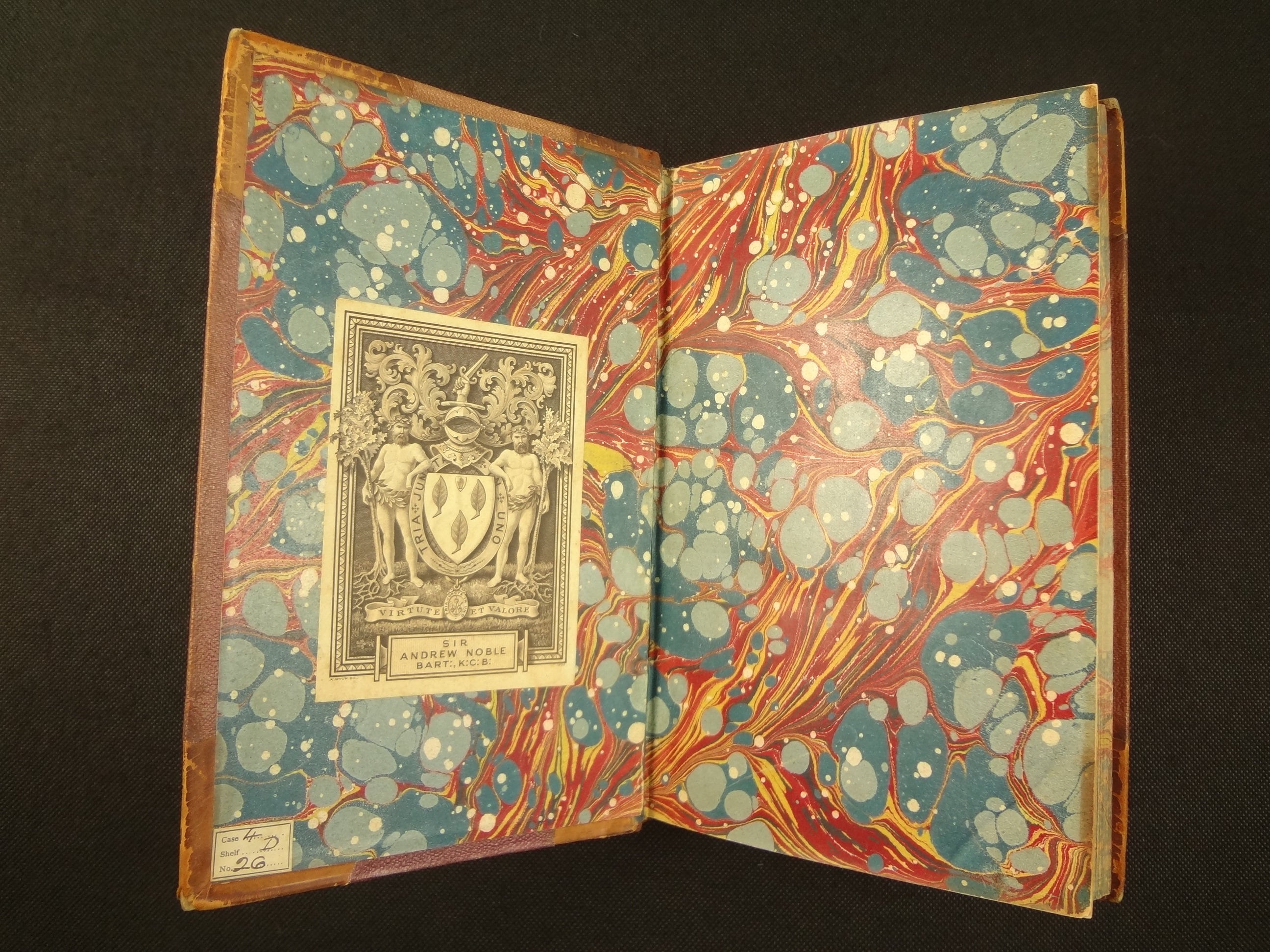 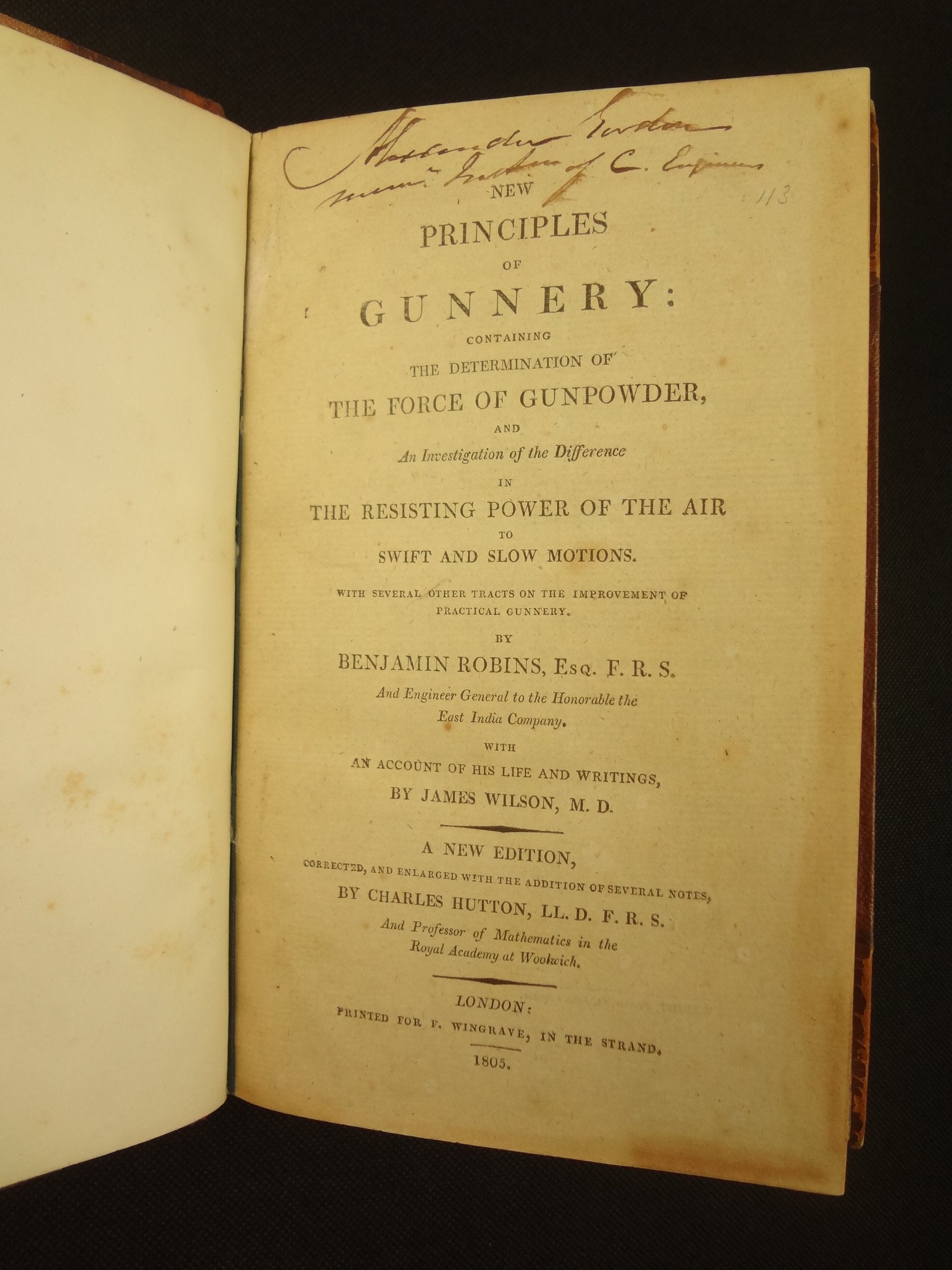 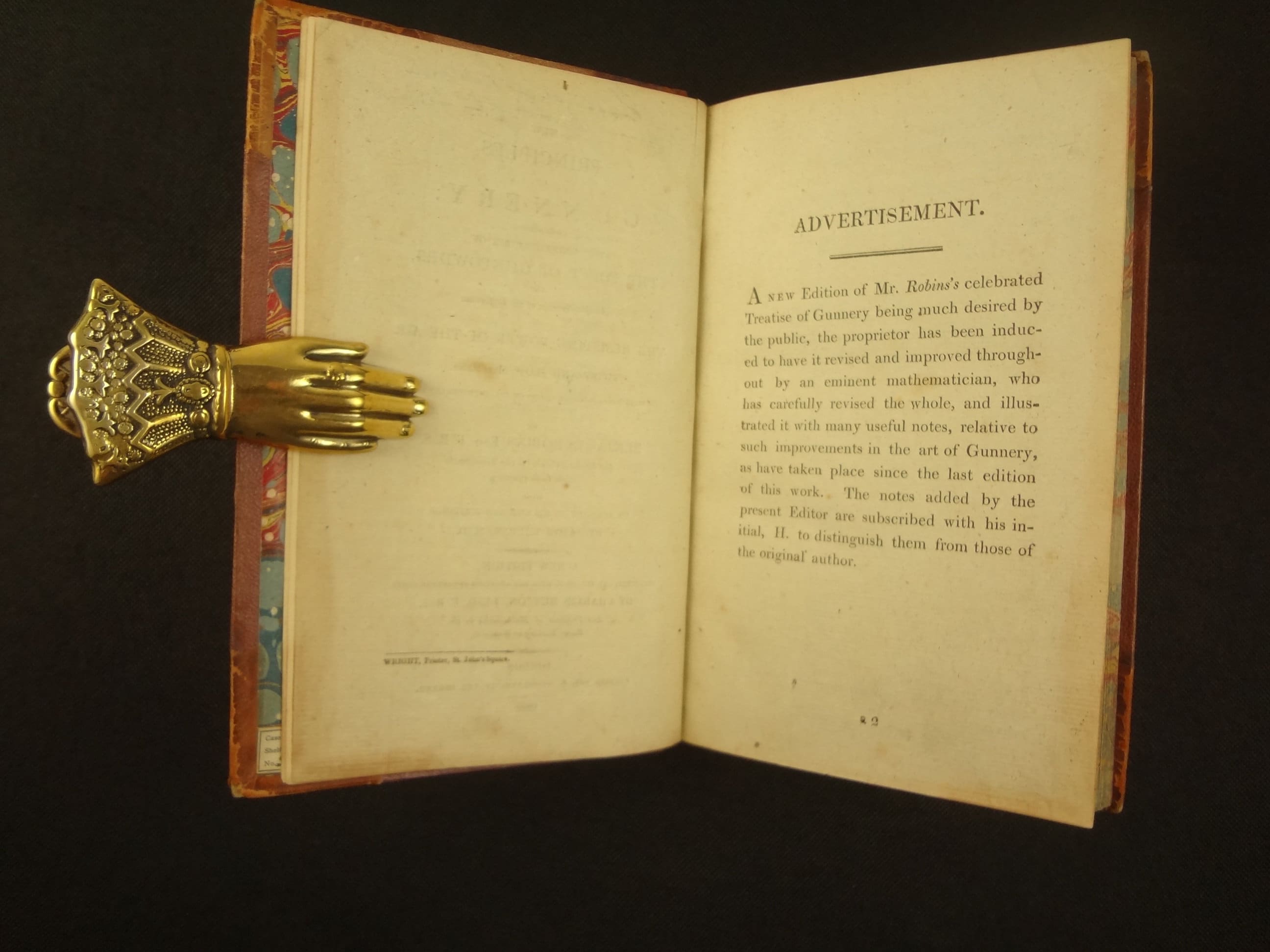 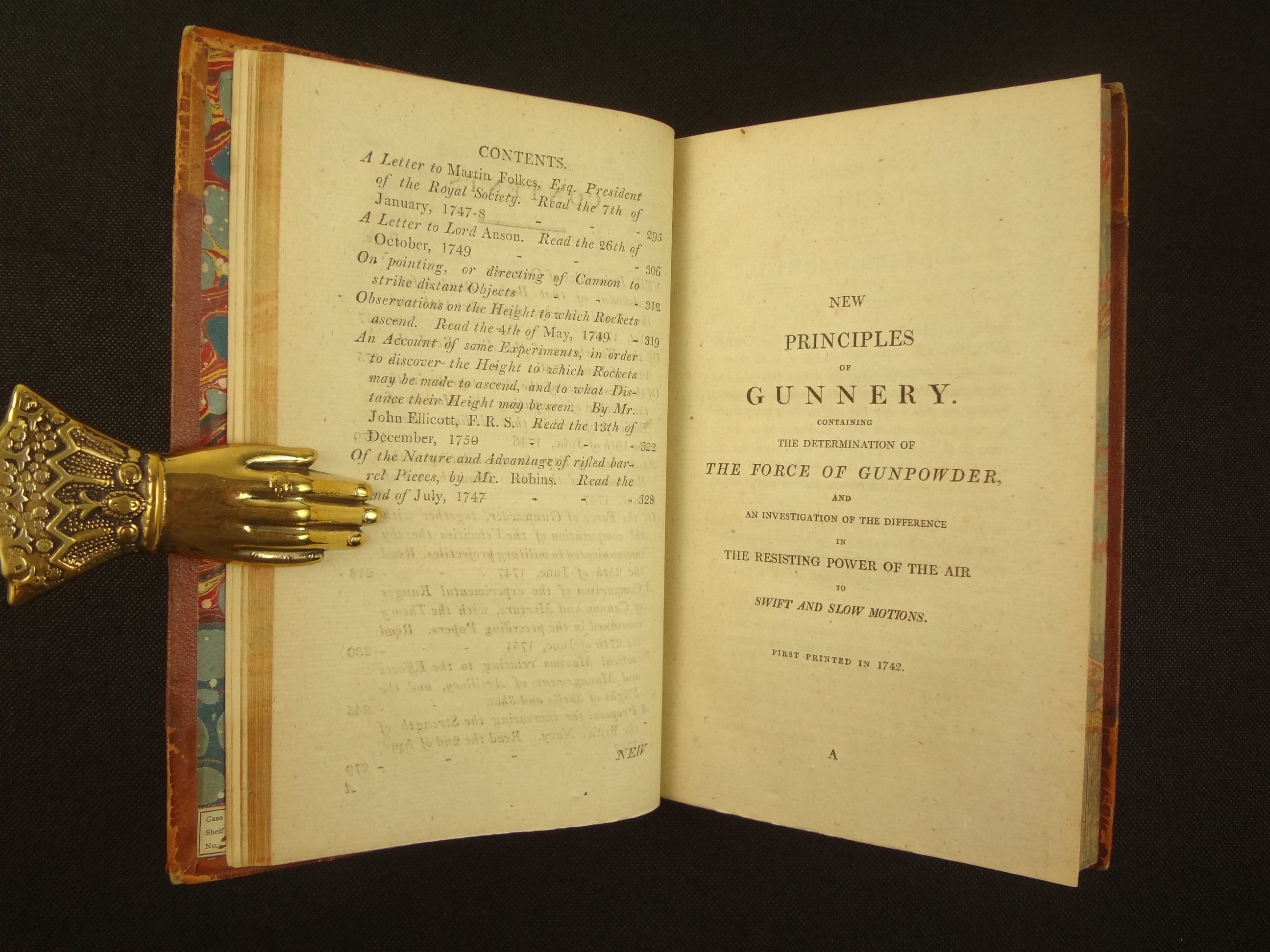 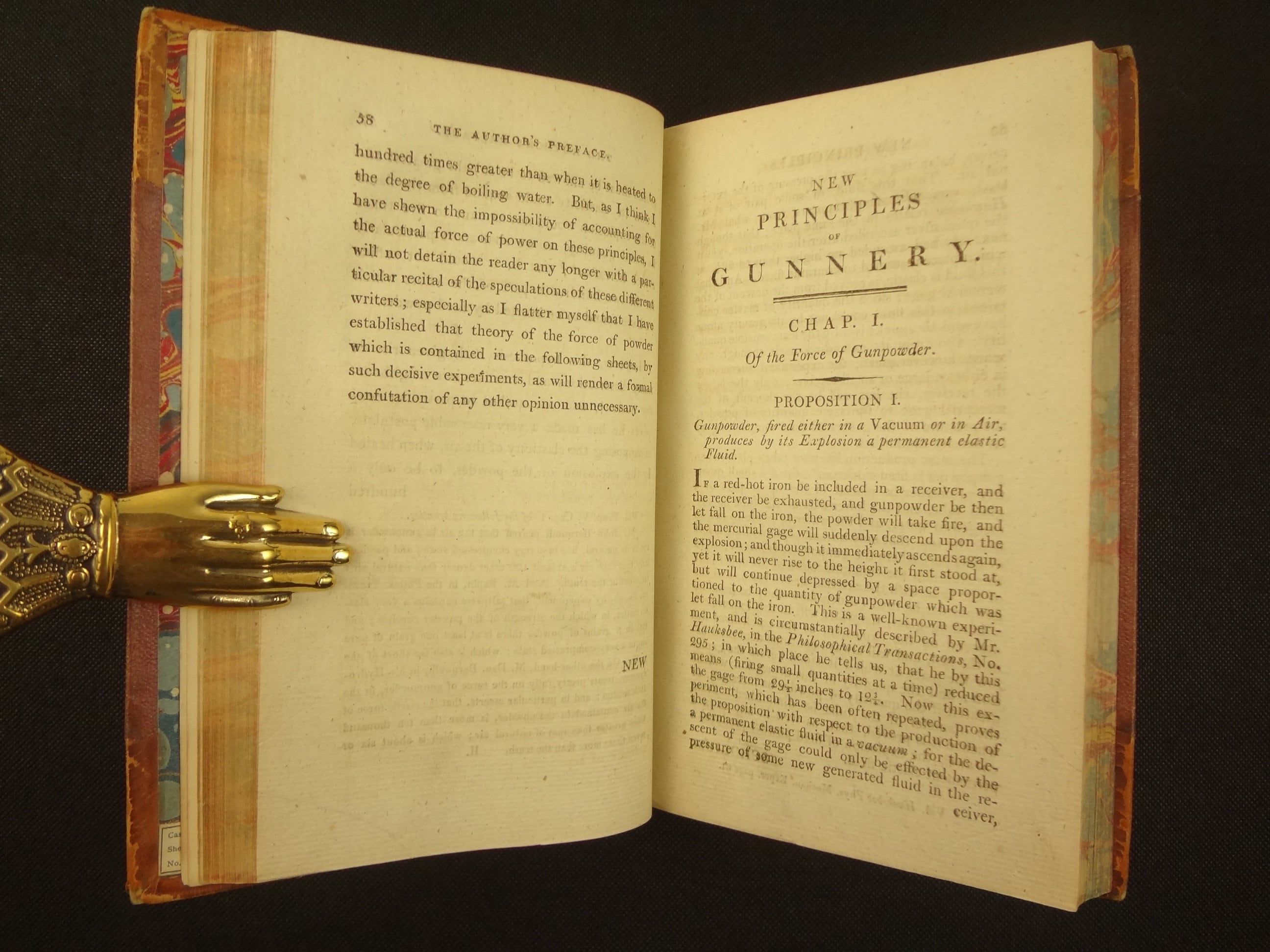 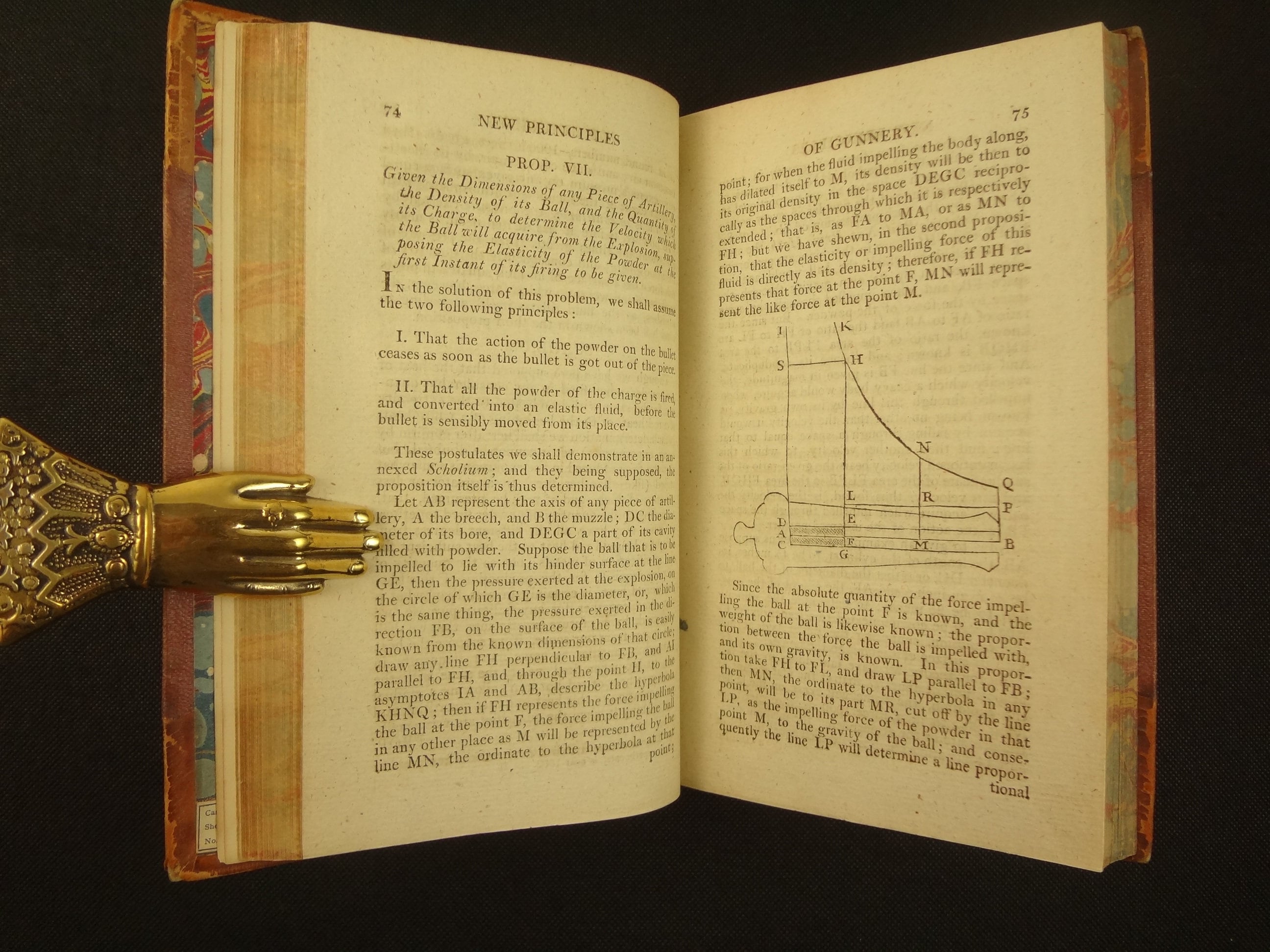 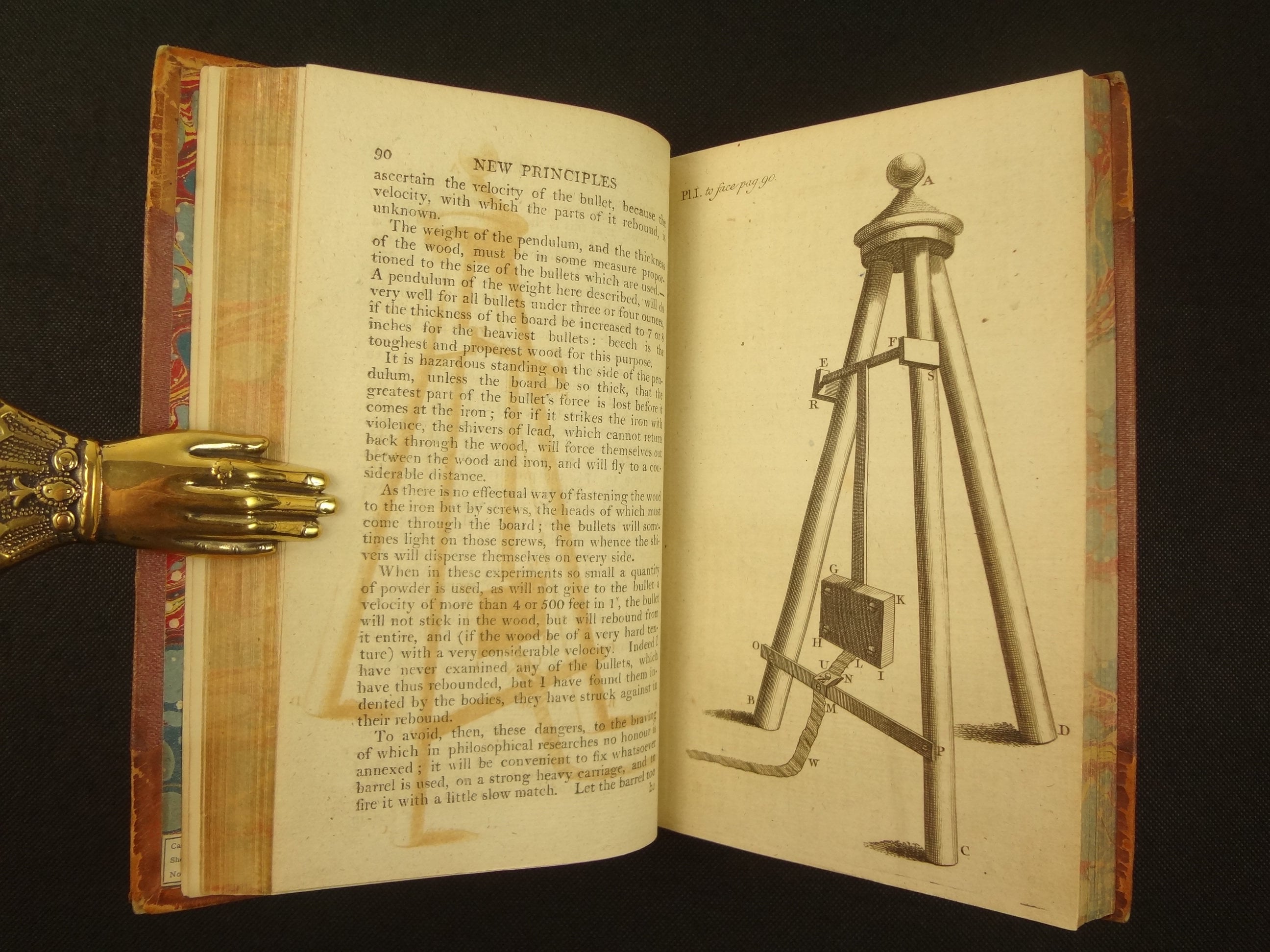 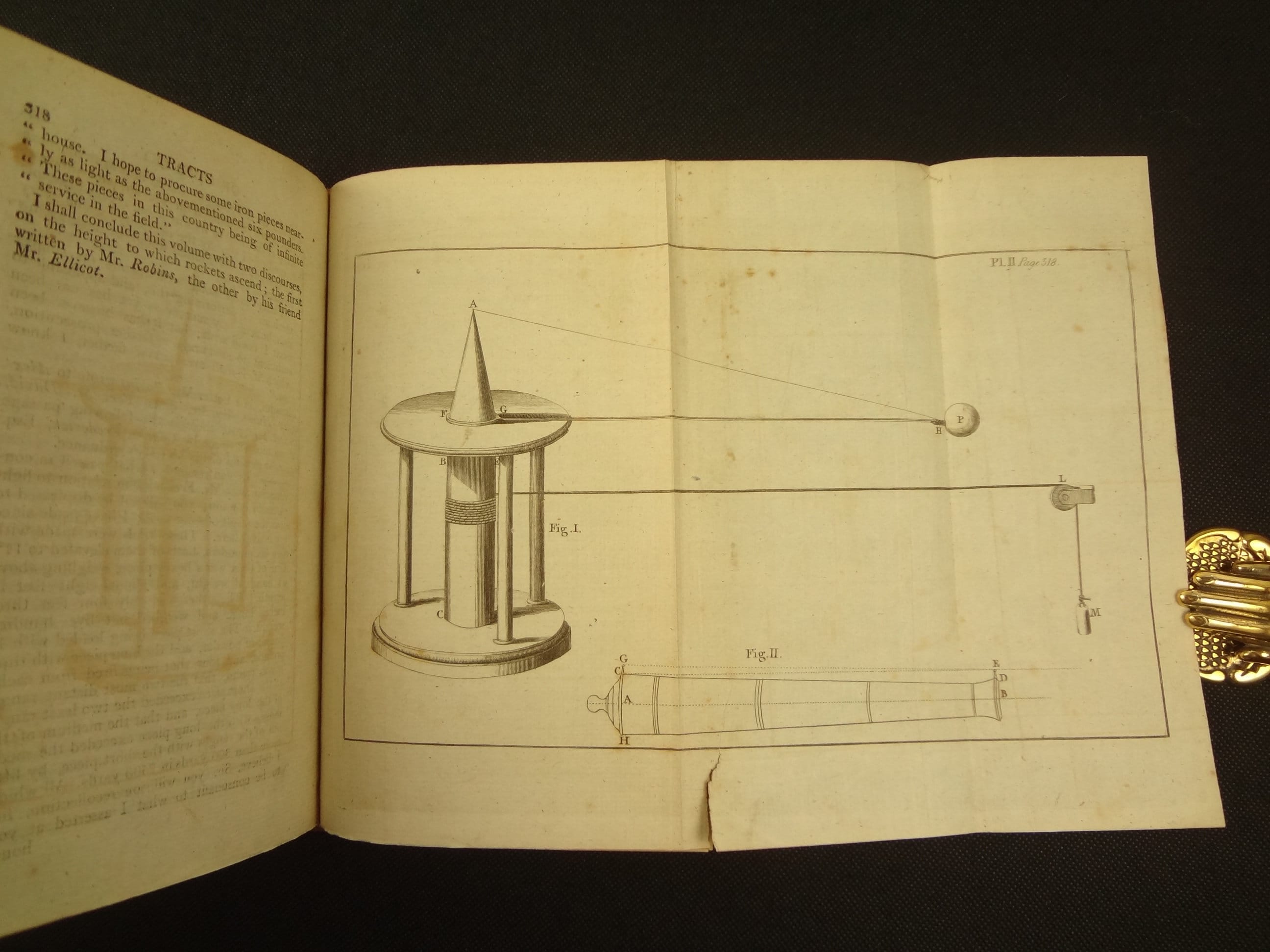 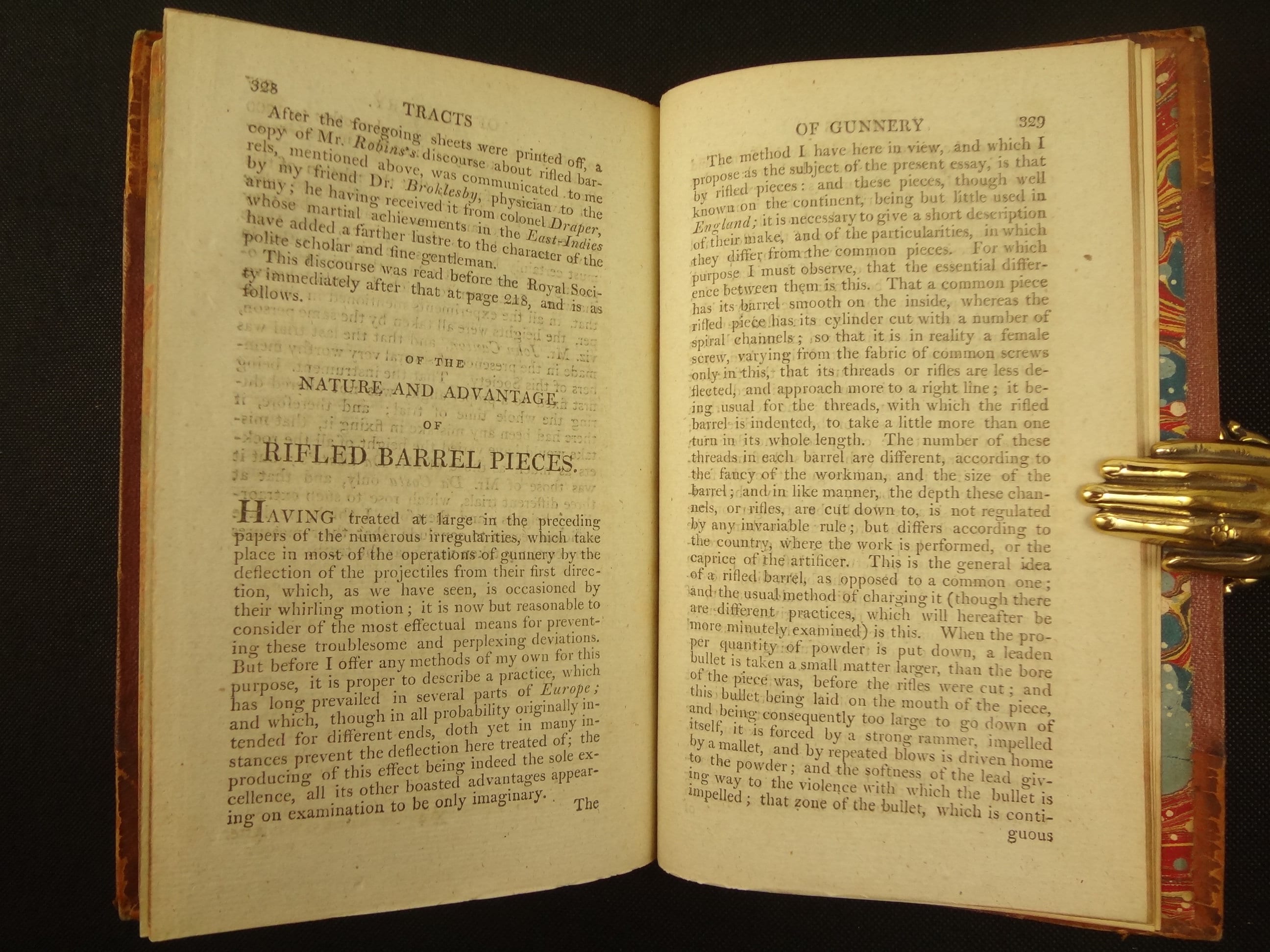 Robins' seminal work on gunpowder and ballistics, updated with improved ratios, etc. by the noted ballistics experimenter and Professor of Mathematics at the Royal Academy, Charles Hutton; this copy from the library of the Scottish physicist Sir Andrew Noble, noted for his work on ballistics and gunnery.

Benjamin Robins carried out an extensive series of experiments in gunnery, embodying his results in his famous treatise on New Principles of Gunnery (1742), which contains a description of his ballistic pendulum (see chronograph). Included in this edition, Robins also made a number of important experiments on the resistance of the air to the motion of projectiles and on the force of gunpowder, with computation of the velocities thereby communicated to projectiles. He compared the results of his theory with experimental determinations of the ranges of mortars and cannon,and gave practical maxims for the management of artillery. He also made observations on the flight of rockets, and wrote on the advantages of rifled gun barrels (also in this edition).

Benjamin Robins (1707 – 29 July 1751) was a pioneering British scientist, Newtonian mathematician, and military engineer. He wrote an influential treatise on gunnery, for the first time introducing Newtonian science to military men, was an early enthusiast for rifled gun barrels, and his work had substantive influence on the development of artillery during the latter half of the eighteenth century – and directly stimulated the teaching of calculus in military academies.

Editor Charles Hutton - Charles Hutton (1737-1823), teacher and promoter of mathematics, was best known during his lifetime as Professor of Mathematics at the Royal Military Academy, Woolwich. At Woolwich, Hutton trained a generation of artillery officers and military engineers from 1773 until his retirement in 1807. He performed experiments, refined theoretical results, and oversaw a revolution in attitudes to the use of instruments, mathematical tables and up-to-date scientific results by artillery officers. He may justly be said to have played a key 'back-room' role in the projection of British power around the globe in the late Georgian period. At the Royal Society Hutton was awarded the Copley medal for his work on ballistics.

Ex-libris plate of Sir Andrew Noble on the pastedown. He was commissioned in the Royal Artillery in 1849, promoted captain in 1855 and became secretary of the Royal Artillery Institution. He was secretary of the British government select committee on the replacement of smooth-bore cannon with rifled artillery and carried out research on the subject. In 1860 he joined Armstrong's armaments works in Elswick, Newcastle-upon-Tyne, first as joint manager and, from 1861, as a partner, where he continued research into artillery, in particular inventing ways of measuring breech pressures. In 1862 he invented the Electro-Mechanical Chronoscope to measure small time intervals between triggers inserted into a gun to determine the acceleration of projectiles as they travelled down the barrel, allowing him to assess the performance of different powders. He worked with Sir Frederick Abel on improving the properties of black powder, making it burn more slowly to produce more gas and a more consistent pressure, with the result that he was able to increase muzzle velocities from 1600 to 2100 feet per second, while the energy developed increased by about 75%. Noble's work also assisted Abel's further development of a new smokeless powder, cordite, in 1889.

See pictures. Re-spined, with a brown cloth, the original leather laid over it. Leather worn at corner and edges. Some sunning around edges of cloth. Ex-libris and library ticket on pastedown. Blank endpapers foxed. Some toning and fox spots in paper, as is typical to this era of paper. Turn-in ghosts on title page and last leaf. Name and note at top of title page, undecipherable (for me); also, small graphite "113". Bottom corner of xxxvii chipped. Ink spot on xlii. Ghost of plate at 90 at 207 (perhaps it was bound different before the re-spine). Inky thumb at gutter of 269, no text affected. 281 dog-eared with large remainder. 3" tear from bottom of Plate II. Graphite initial on rear flyleaf.