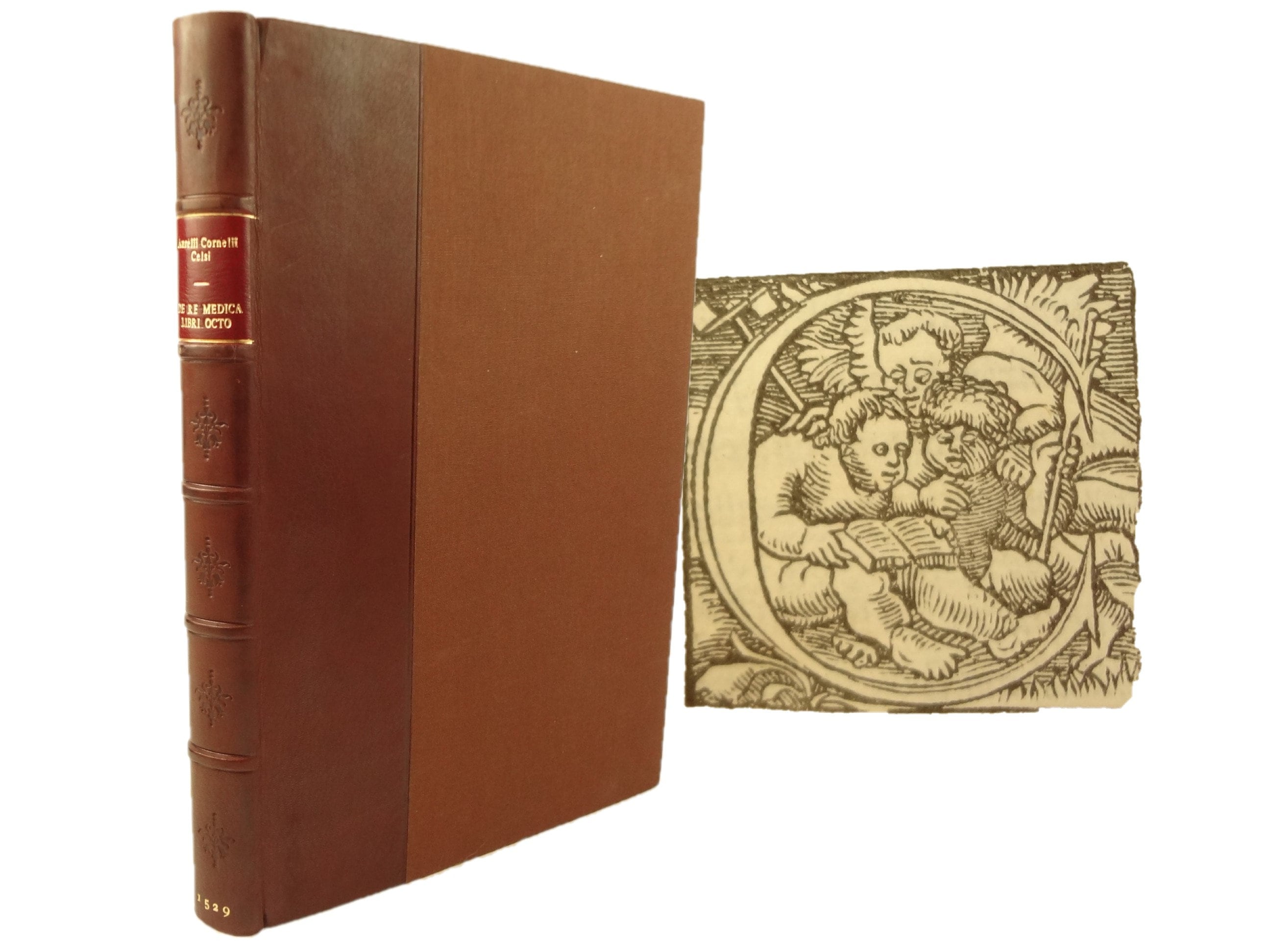 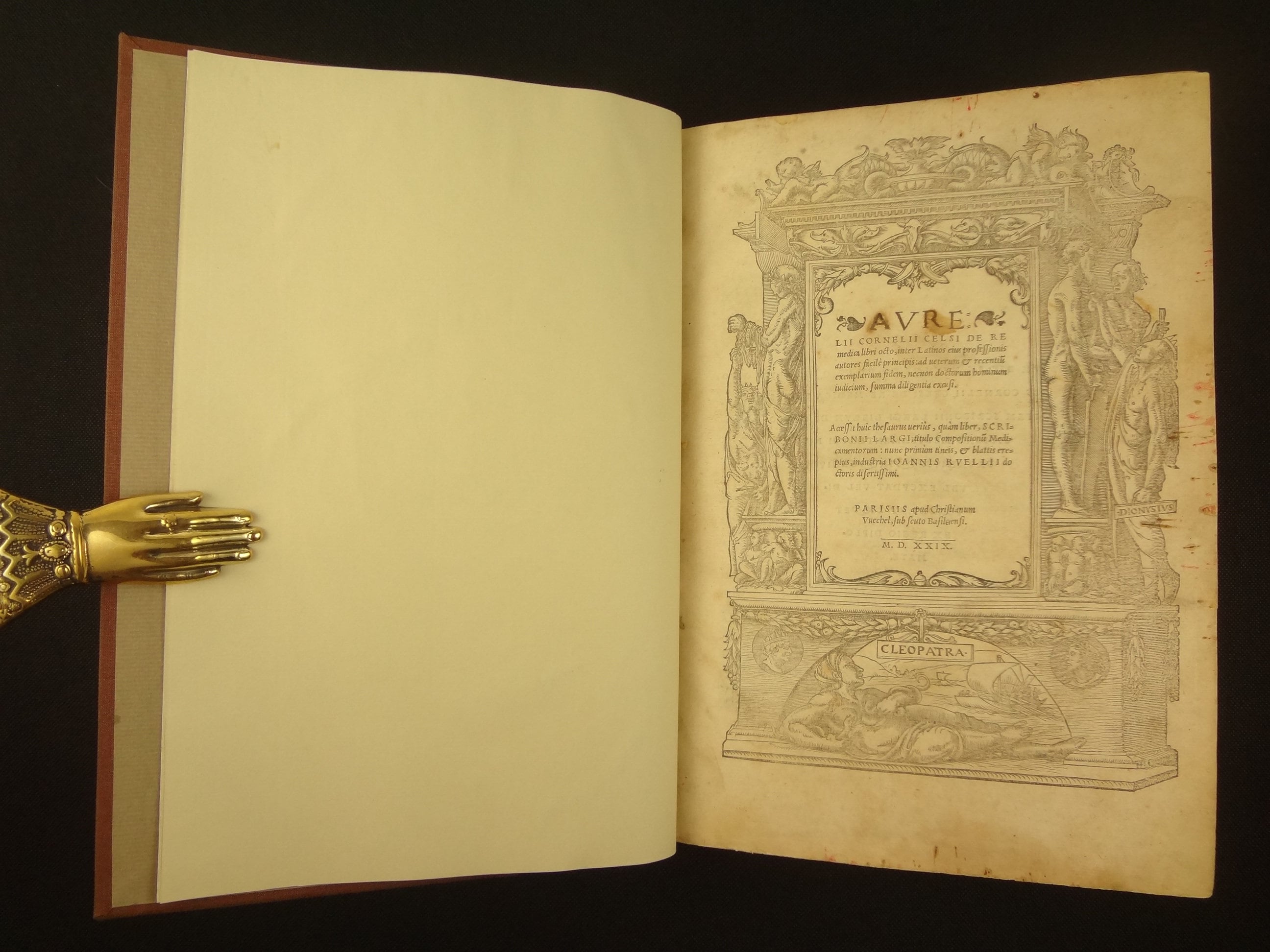 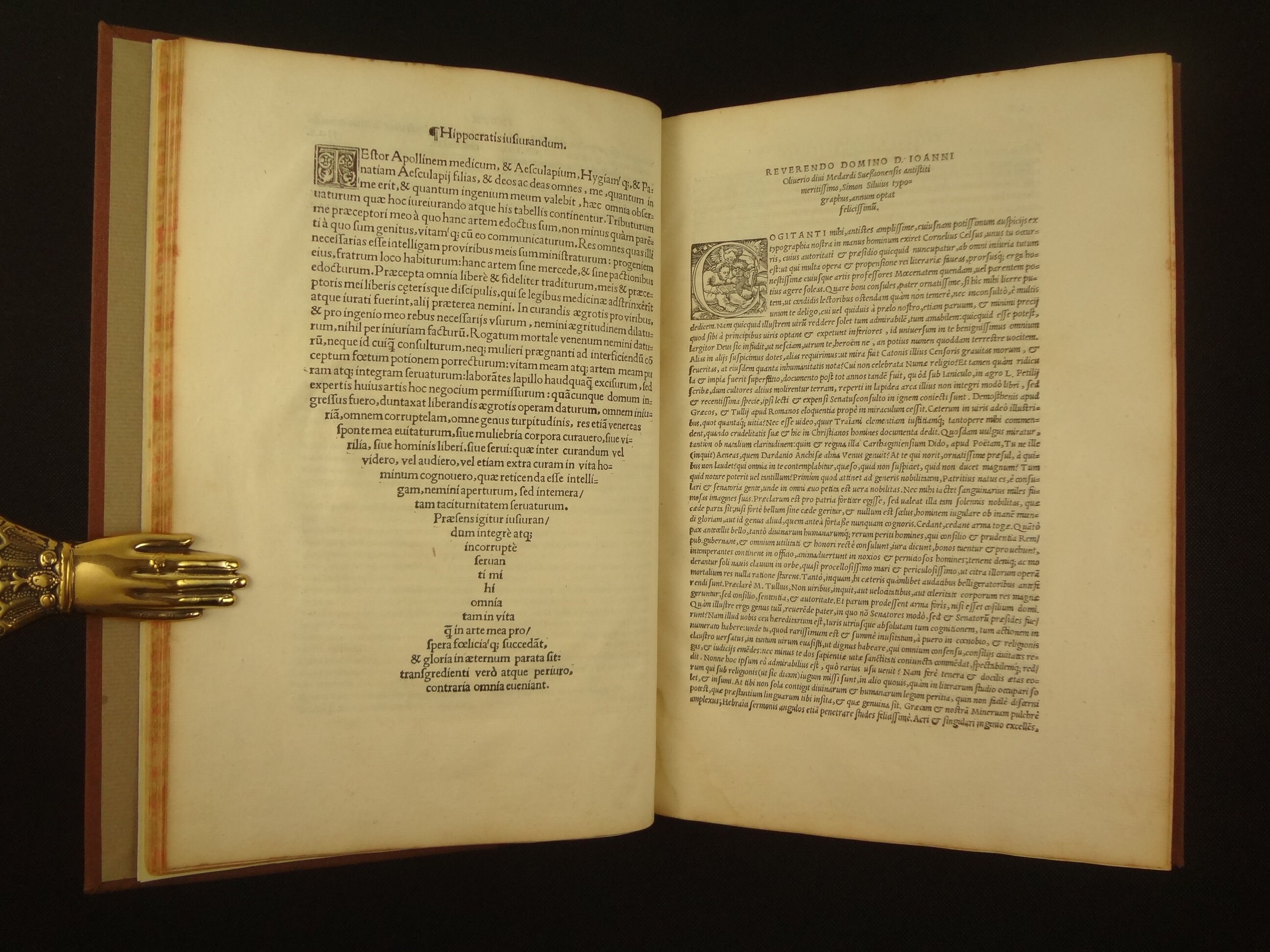 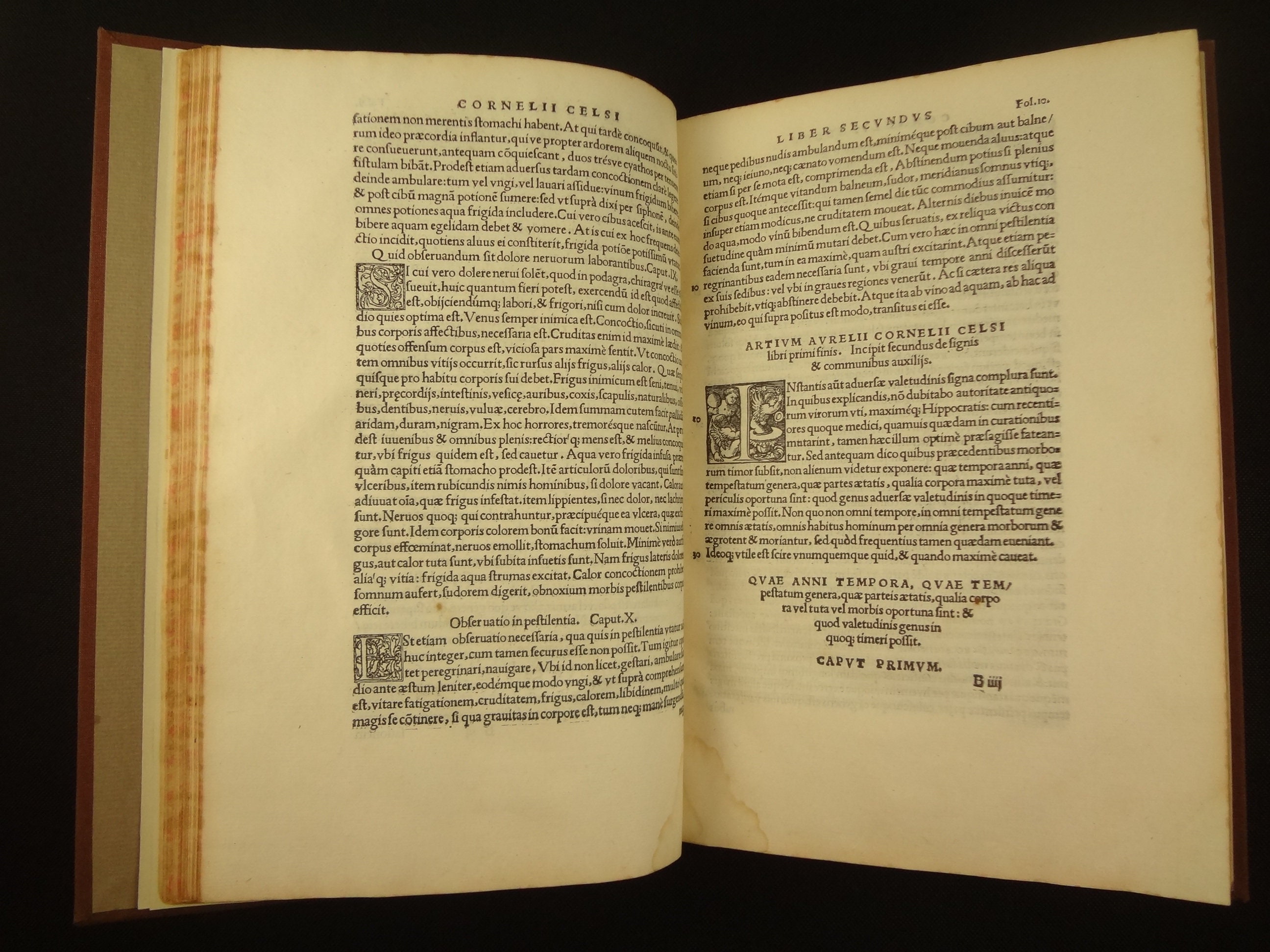 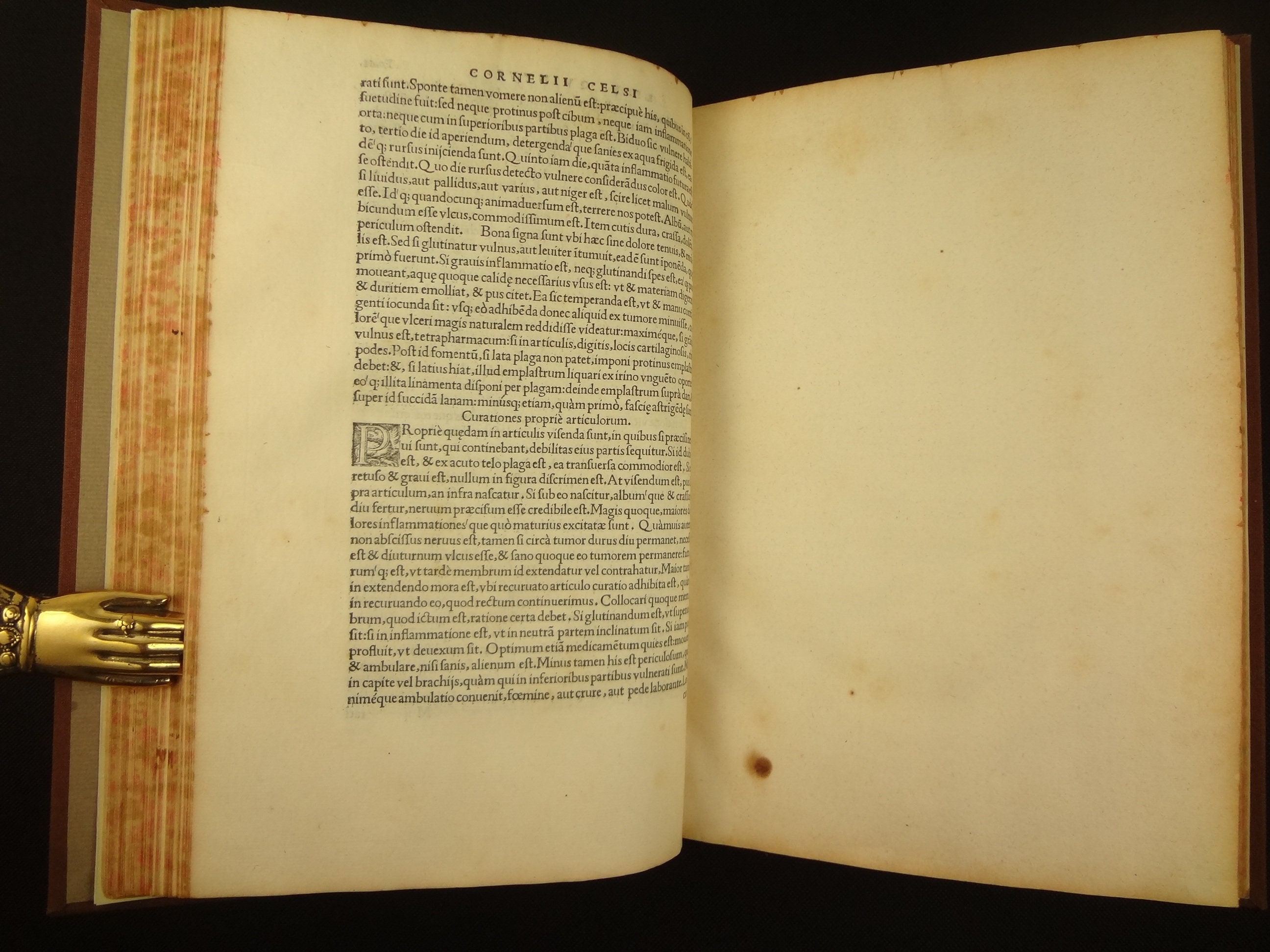 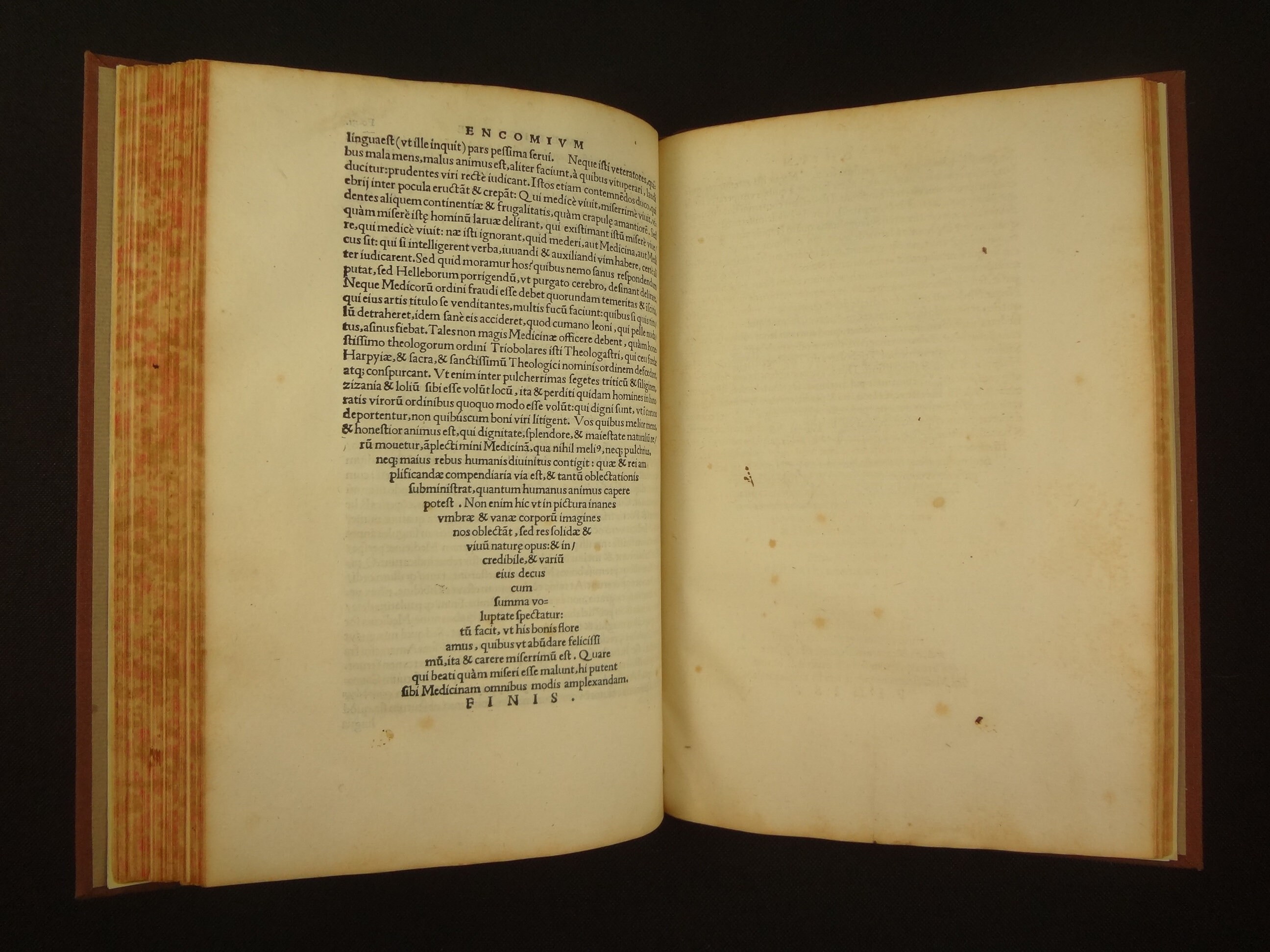 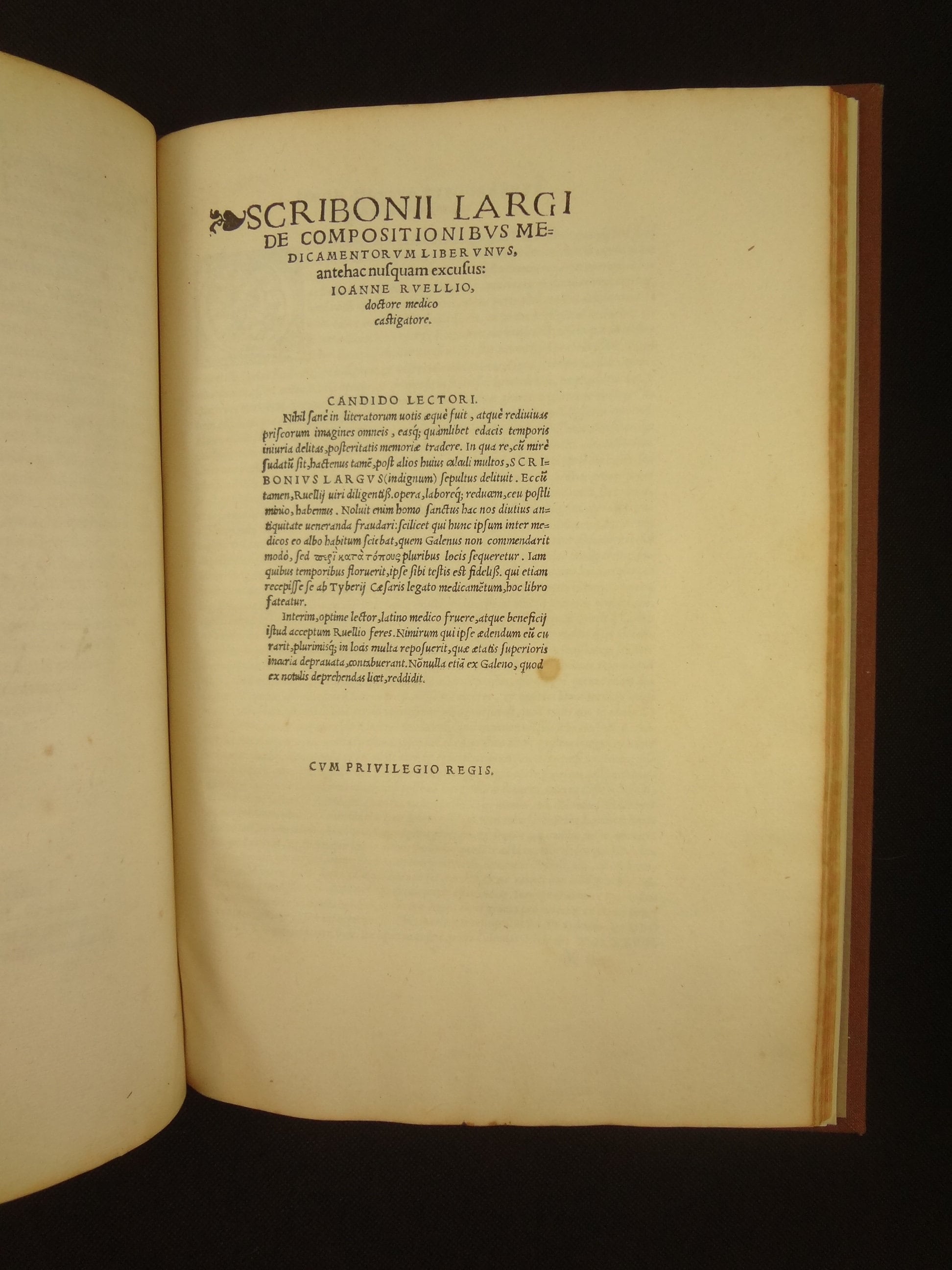 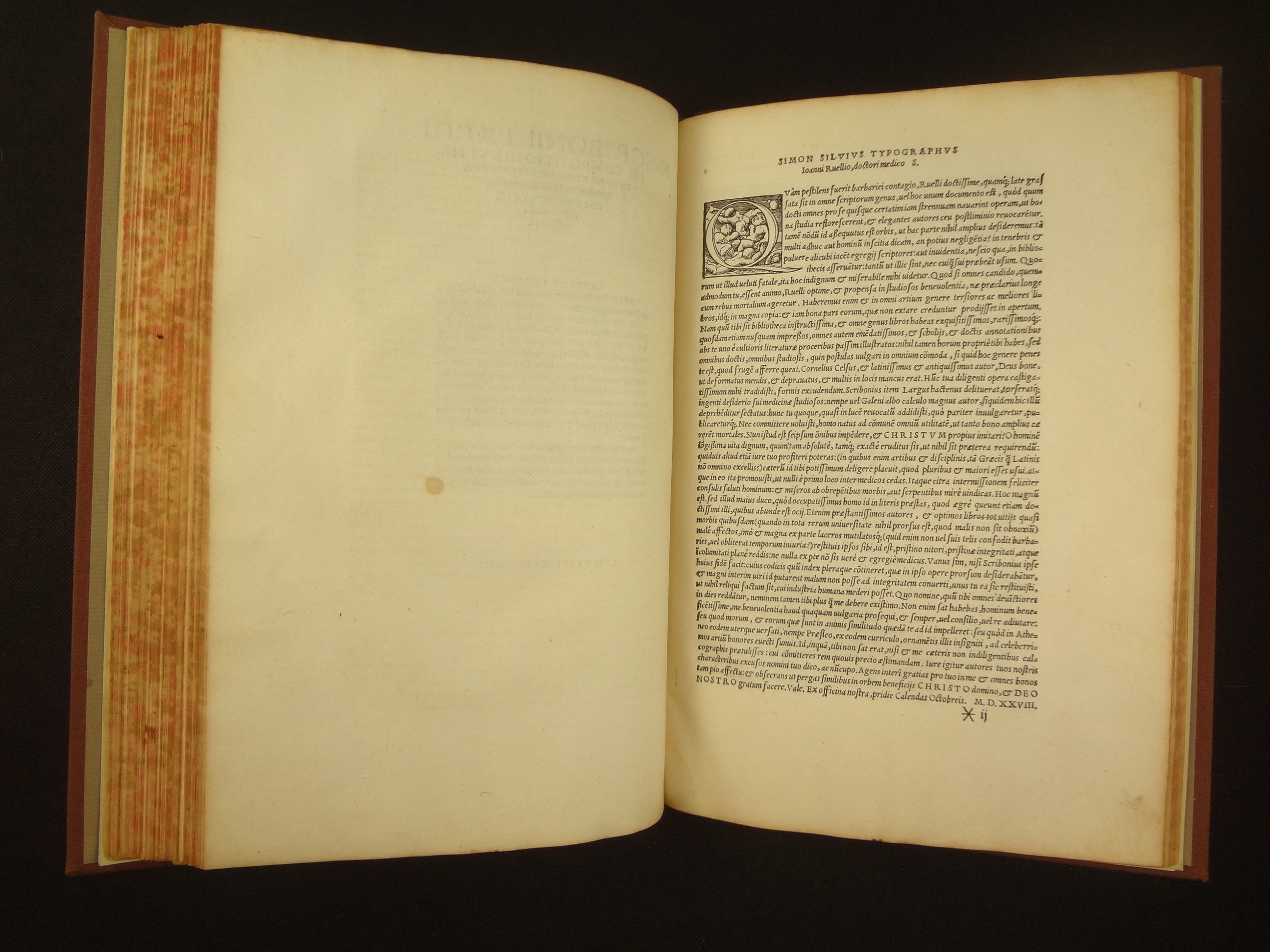 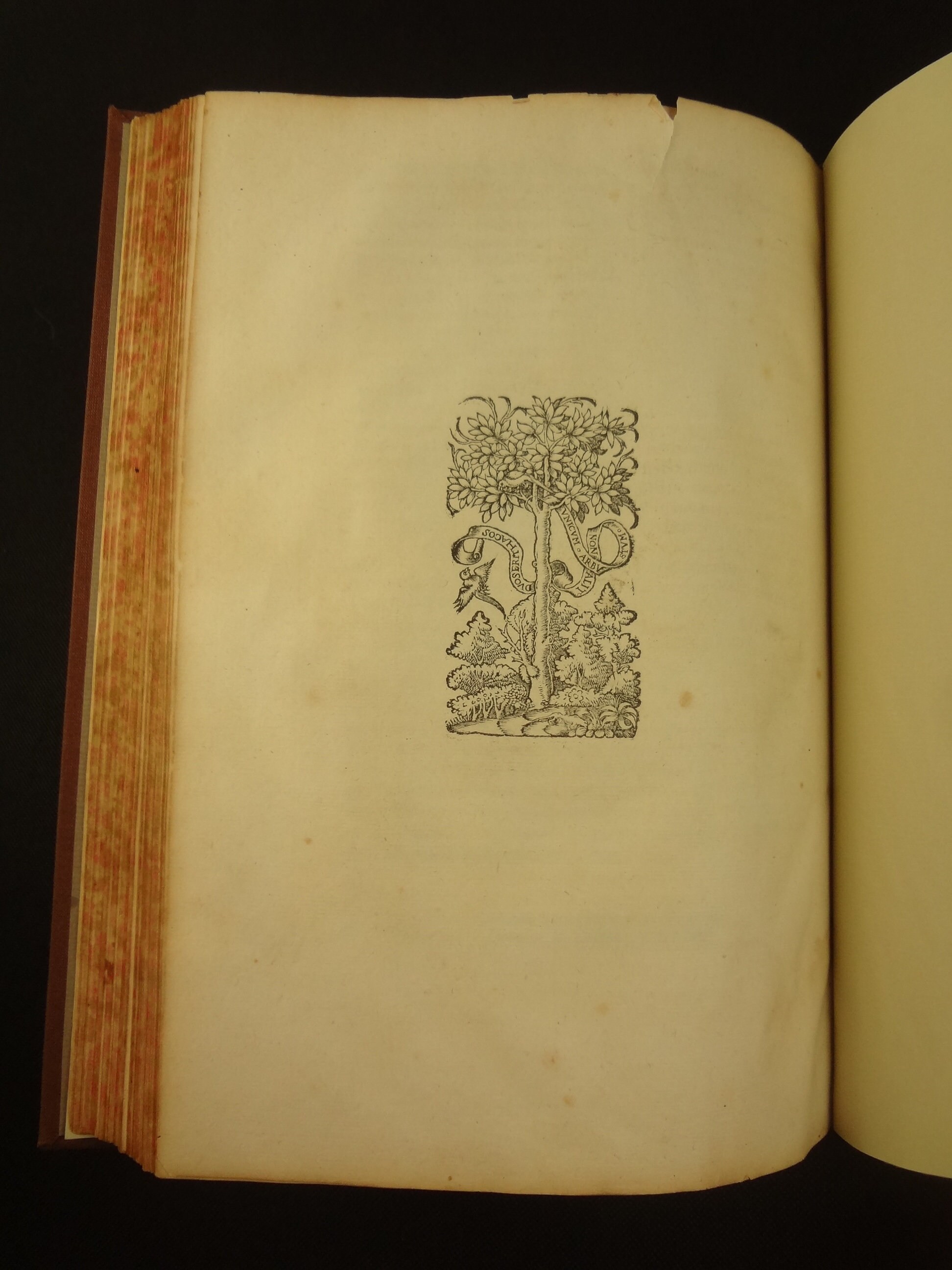 The first printed edition of Scribonius' Compositiones, as edited by Ruel and printed by Simon du Bois and Chrestian Wechel in 1528 (per colophon). Also with Celsus' De Medicina by the same printer.

These two are often broken, and sold individually, but the signing of the gatherings at the bottom of the pages suggests they were printed together. Also, several Universities hold copies of the two works together in this manner - Albertina, Dresden, among others (OCLC 311523729).

Checking Vialibri at the time of listing this book, two copies of the Scribonius 1528 edition are on the market for circa $10k USD (one at Librarie Antonio Pettini and the other at Antiquariat Forum). I can't find a copy of the Celsus' edition currently offered on the market.

About the Works (in extreme brief) -

Aulus Cornelius Celsus (c. 25 BC – c. 50 AD) was a Roman encyclopaedist, known for his extant medical work, De Medicina, which is believed to be the only surviving section of a much larger encyclopedia. The De Medicina is a primary source on diet, pharmacy, surgery and related fields, and it is one of the best sources concerning medical knowledge in the Roman world.

Scribonius Largus was a court physician to the emperor Claudius. About A.D. 47, at the request of Gaius Julius Callistus, the emperor’s freedman, he drew up a list of 271 prescriptions (Compositiones), most of them his own, although he acknowledged his indebtedness to his tutors, to friends and to the writings of eminent physicians. Scribonius' use of opium and electro-shock therapy (using the shock of a torpedo fish, i.e. electric ray) are notable.

This 1528 printing of the Compositiones is considered the first (and confirmed by Brunet, IV, 6597). Honestly, I had a hard time believing that it was the first printed edition, but I searched OCLC for "Author: Scribonius" and the date range of anything before 1527; no printings were returned with those search factors.

Measures approx. 29.5 x 20 x 2.5 cm. Calf spine with hardcover cloth covered boards. Spine with five raised bands; five compartments with a central floret in blind, one compartment with the Celsi and Medica title in gilt on red morocco. Also, year in gilt at base of spine. Many decorative and inhabited initials throughout. Du Bois printer's mark at colophon.

See pictures. Fresh simple and functional binding with little wear; a few light (ring?) rubs to leather, a few tiny marks in cloth. Some toning and thumbing (well-thumbed) throughout, with an occasional fox spot. Celsus condition - Title page a little faded with some ink marks along edges, two ink spots at "Aurelii" and a 1 cm tear at fore-edge. Spot at bottom-edge of Aiii verso and facing page. Moisture mark at bottom-edge at the gutter, and higher in the gutter (mostly at front, no text affected). Some marginal annotations and in-text underlining. Small candle ember hole on B5. Wide healthy margins, but still early annotations show signs of being trimmed slightly. 2 cm ink smudge on 63. Leaves 69 and 70 missing but blank wove leaves bound-in at their place. 1 cm ink spot on 92. Pinhole at bottom-edge of 131. Scribonius condition - 1 cm spot on title page. Leaf 14 and 17 missing from Scribonius. 2 cm chip at top of colophon page.