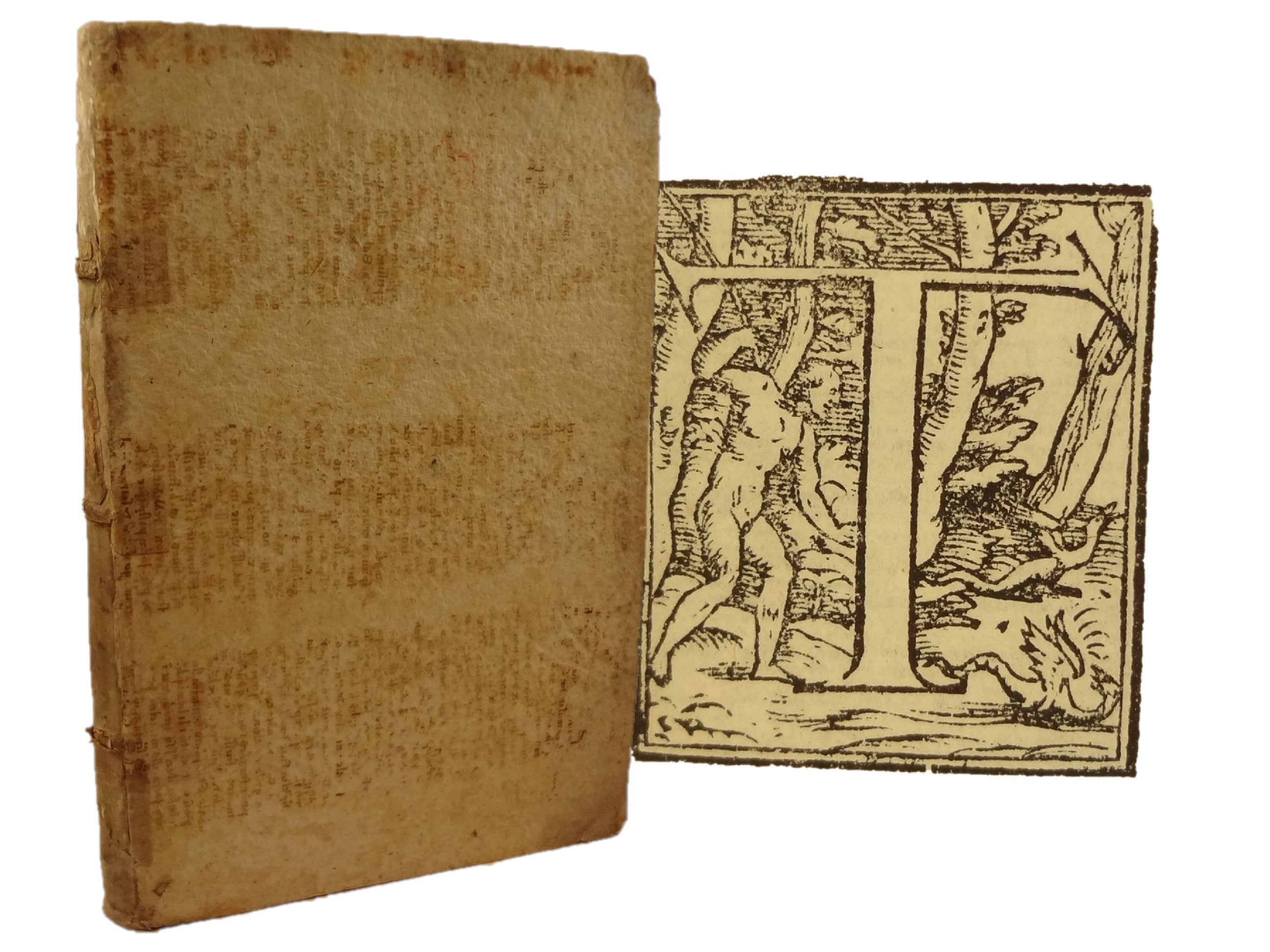 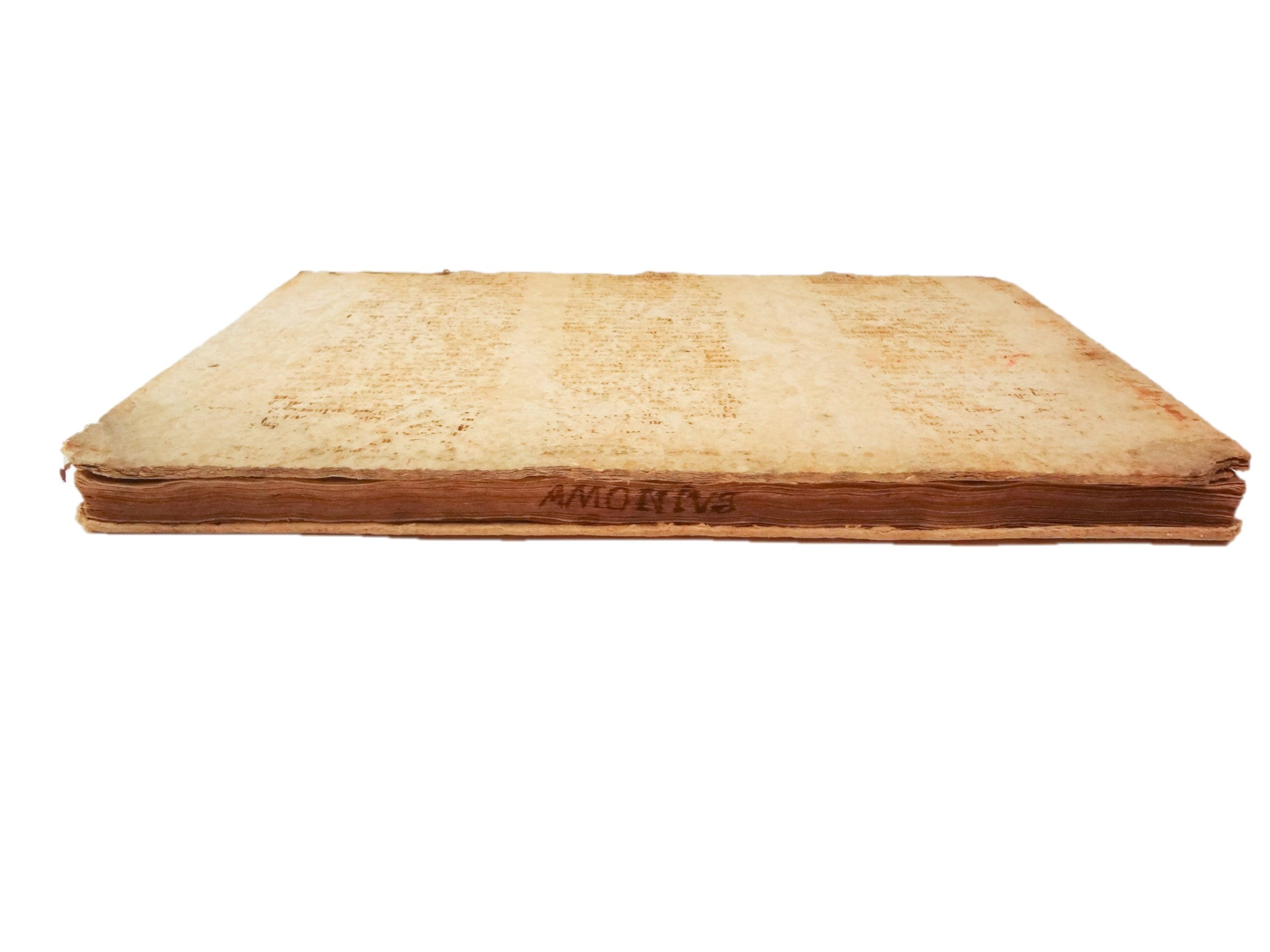 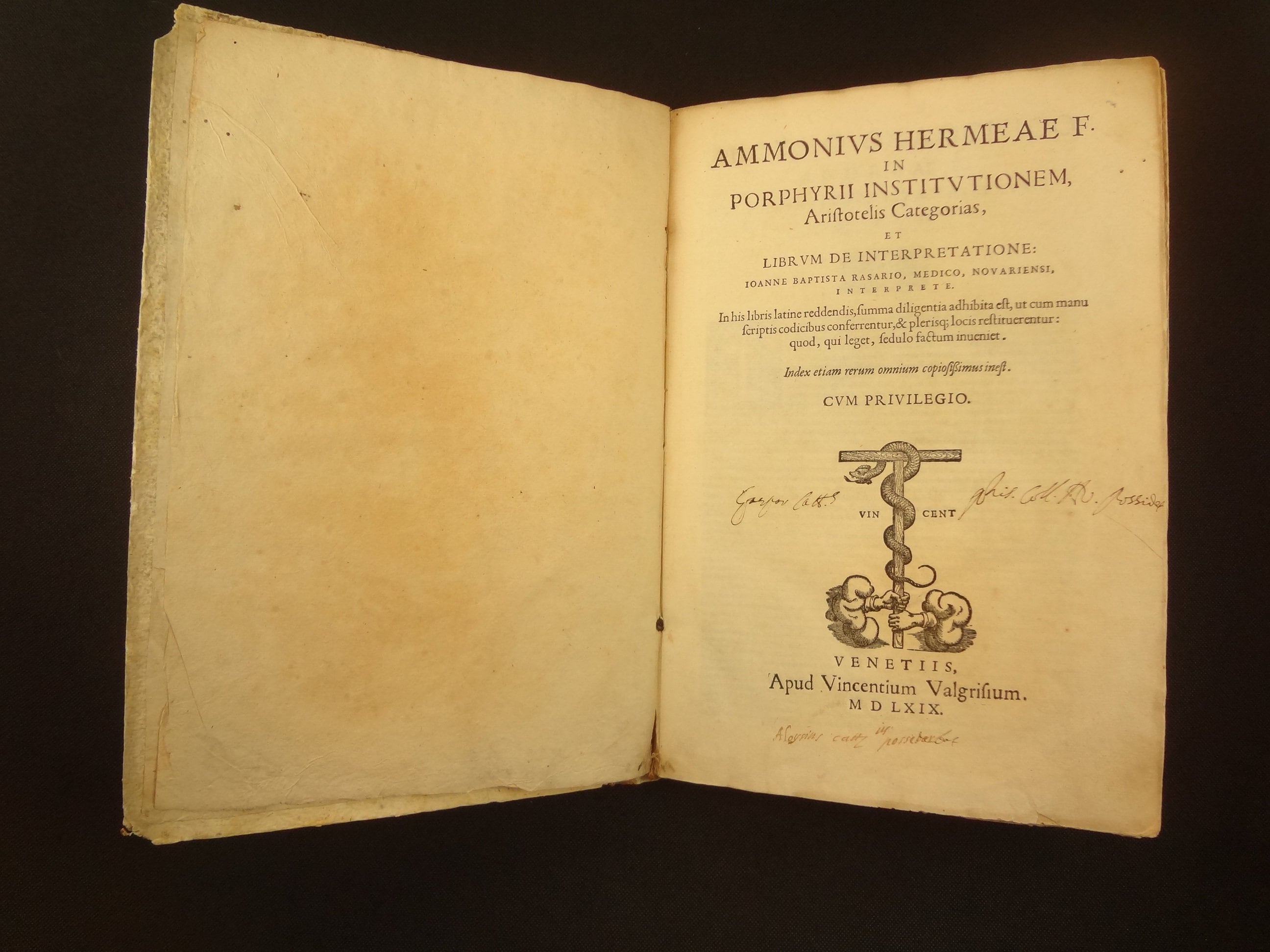 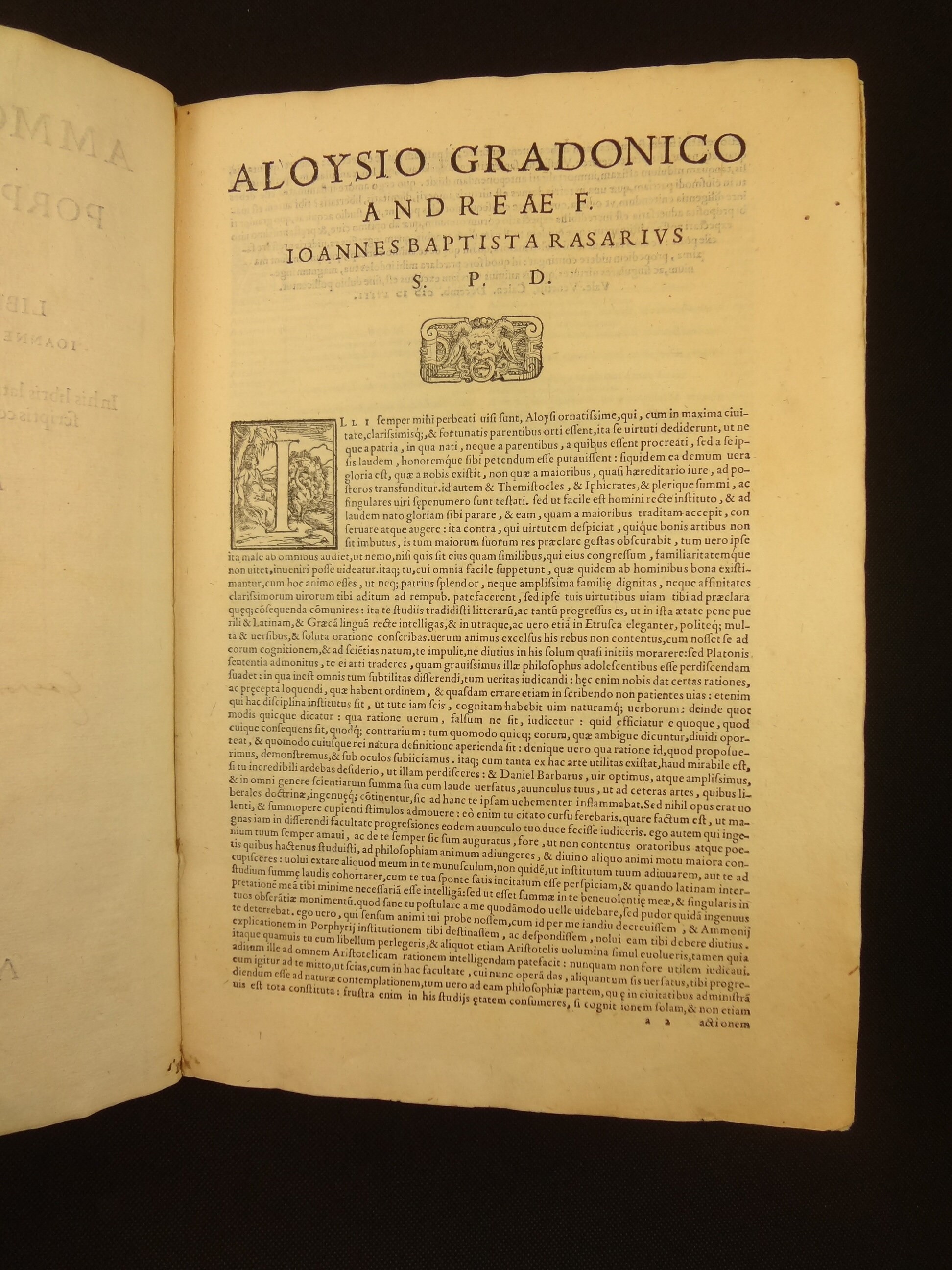 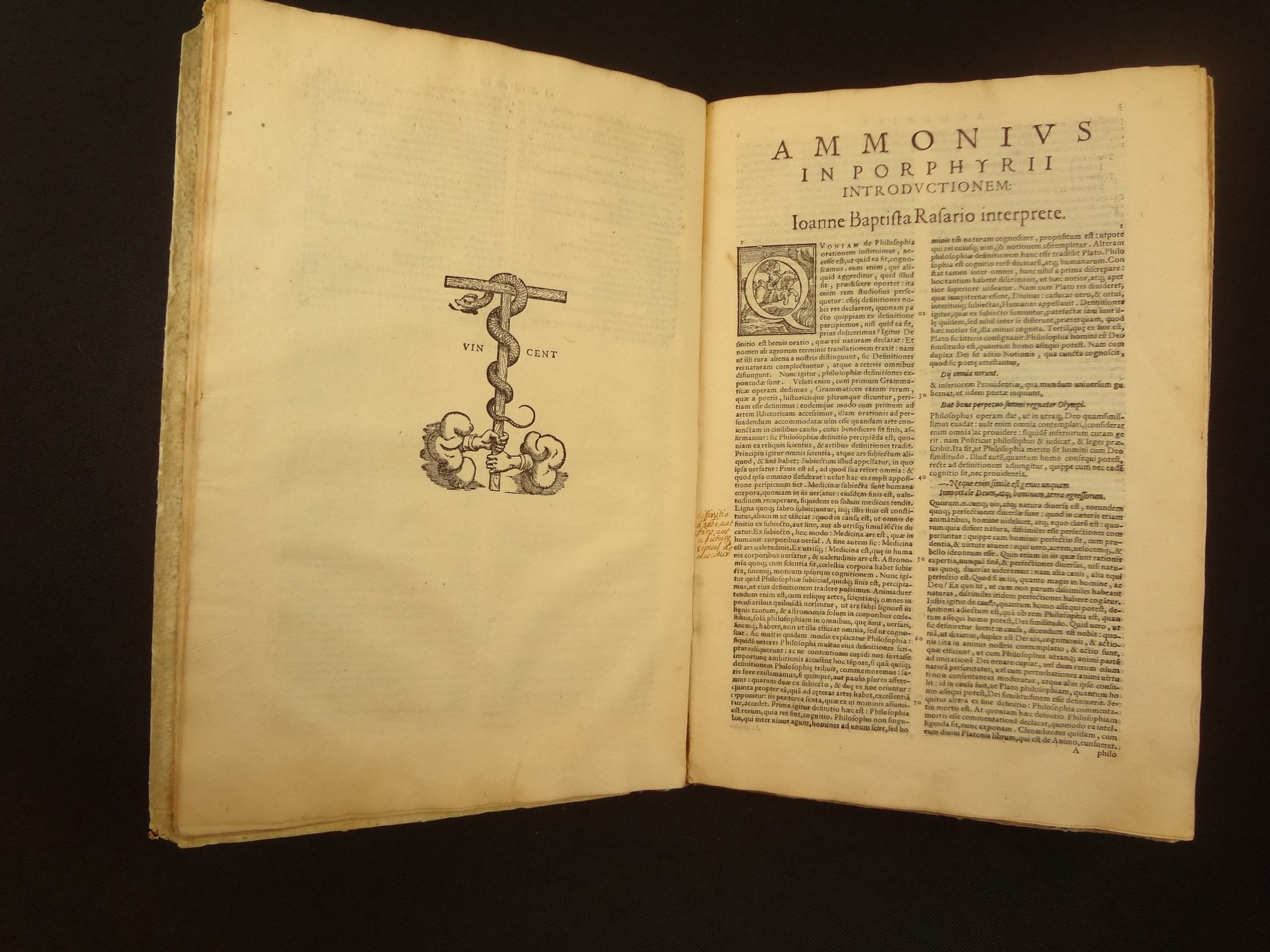 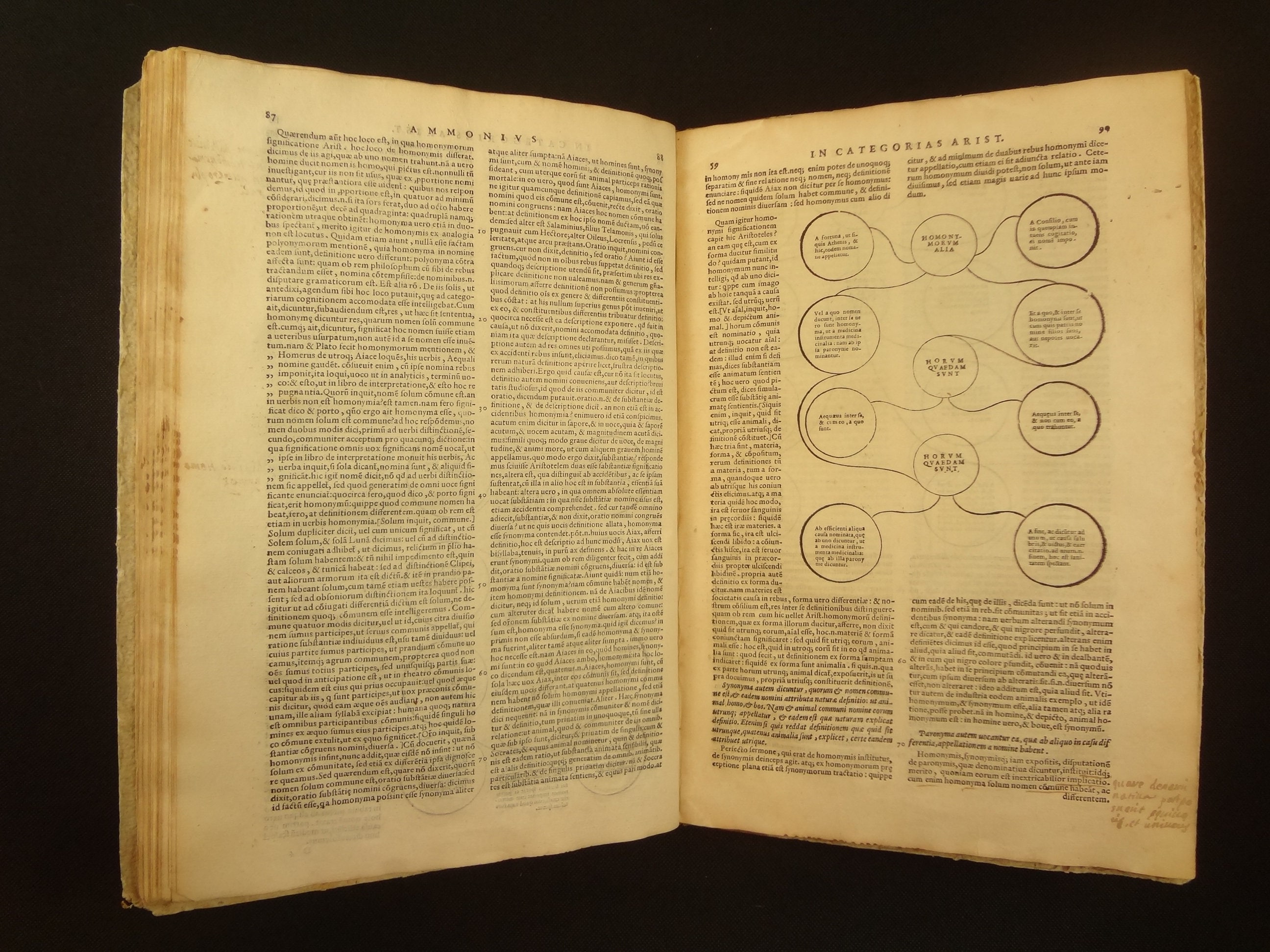 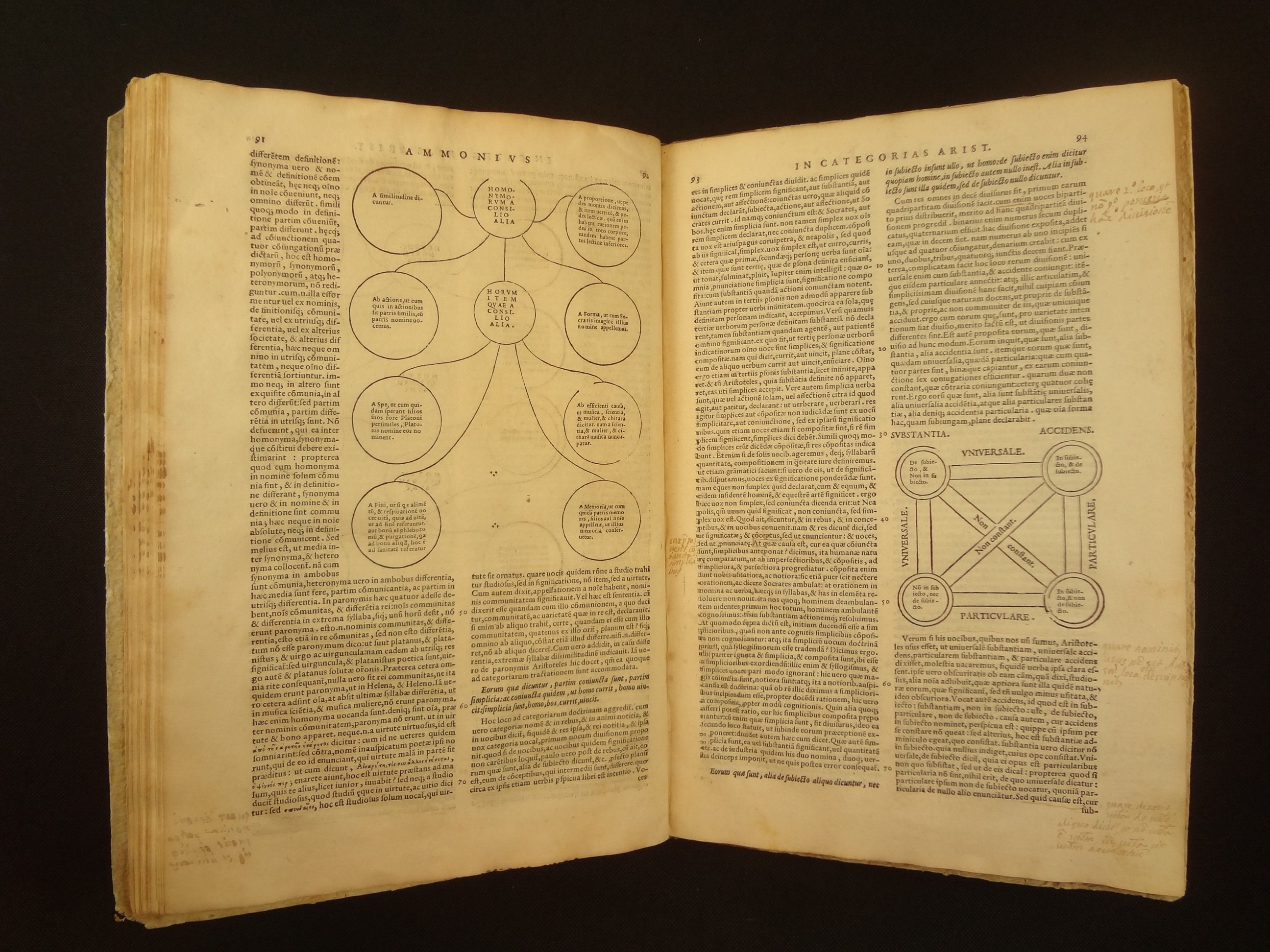 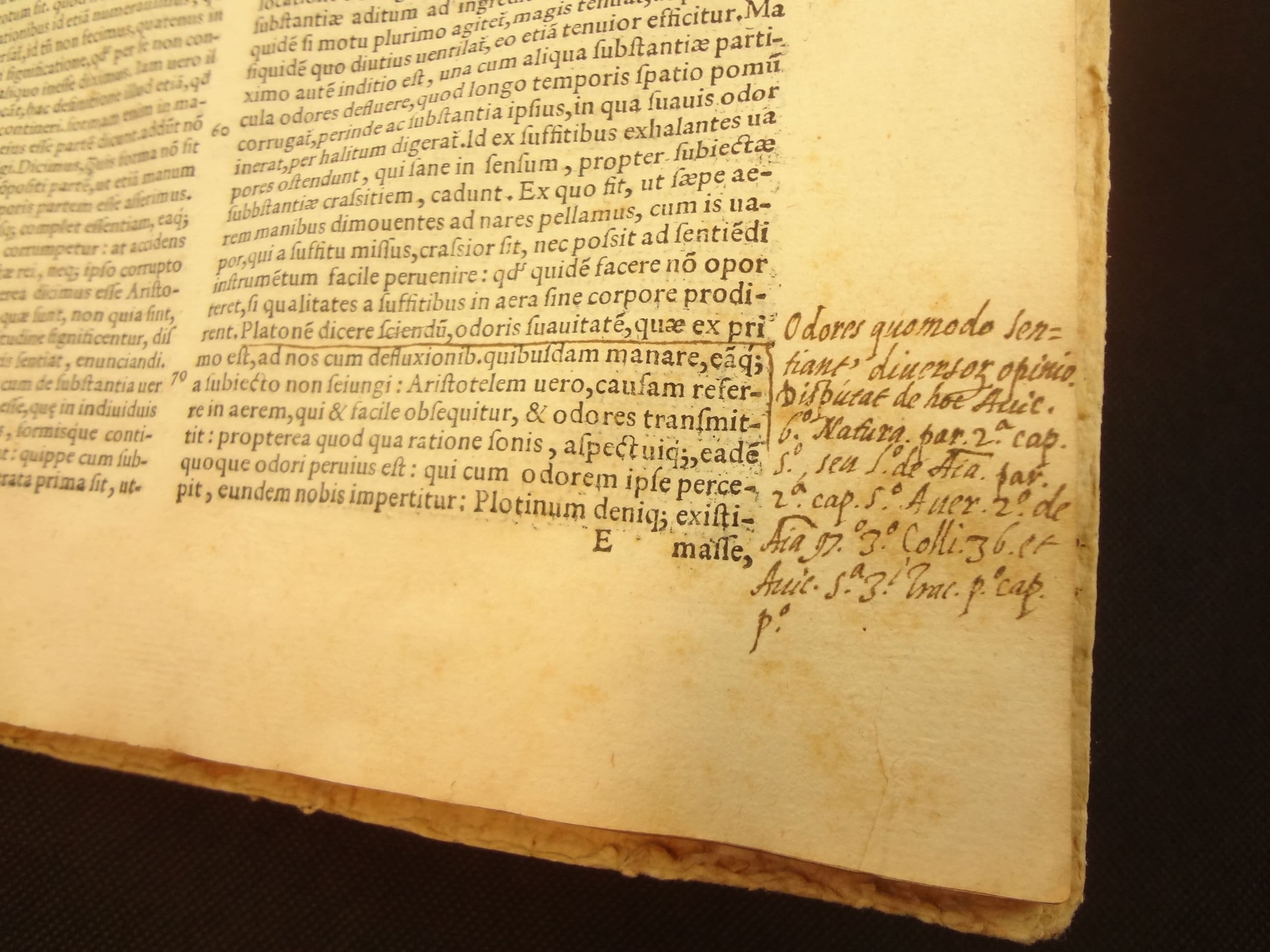 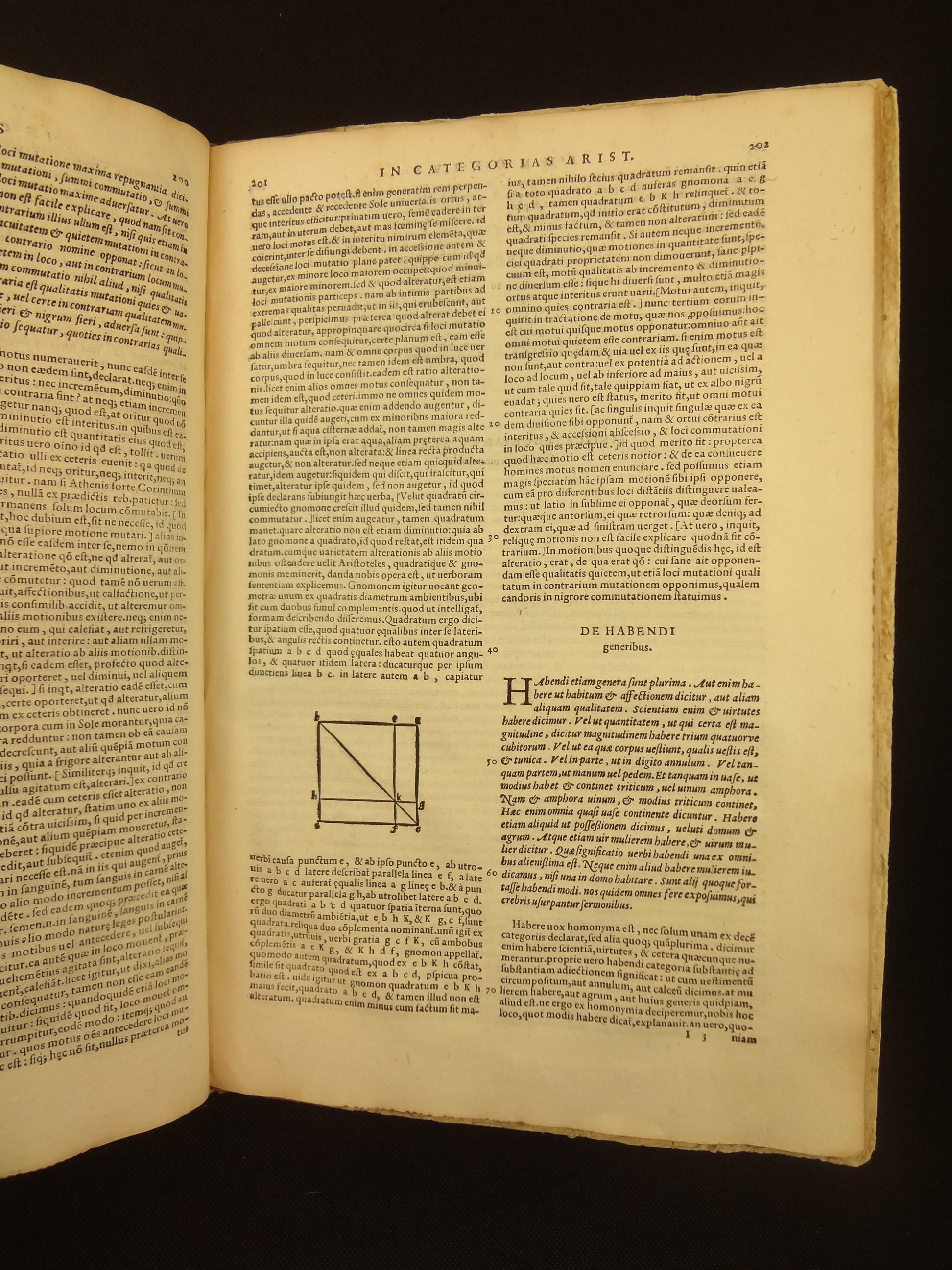 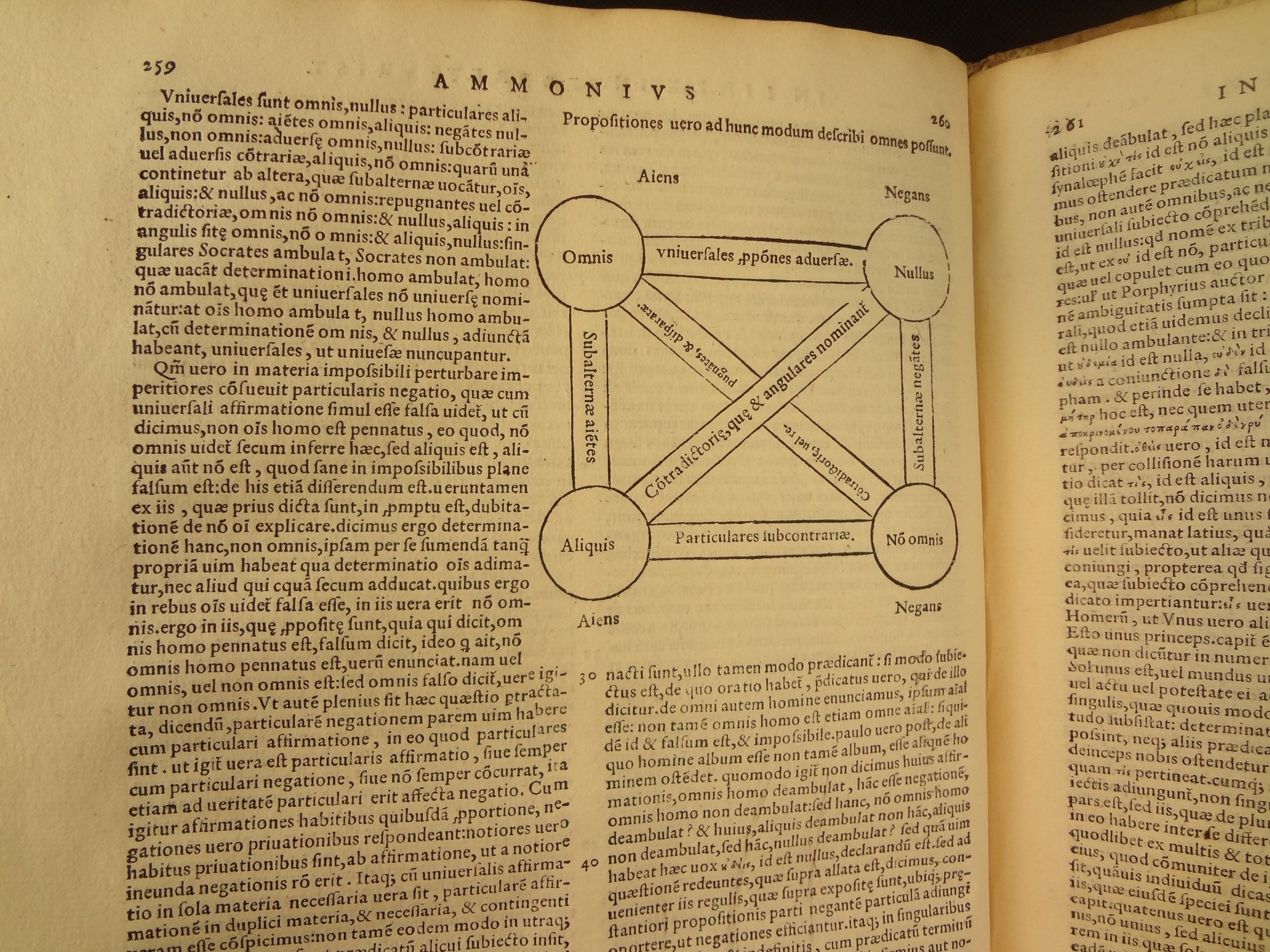 A 1569 printing of Porphyry's Institutionem, Aristotelis' Categorias, et Librum de Interpretatione, with delightful signs of contemporary use; the binding shows traces of the manuscript that once wrapped it, the bottom-edge and fore-edge have the title written in manuscript, there are several names on the title page and manuscript annotations throughout (in an old hand). Several large woodcut diagrams also accentuate the work.

“Porphyry of Tyre (c. 234 – c. 305 AD) was a Tyrian Neoplatonic philosopher born in Tyre, Roman Syria during Roman rule. He wrote original works in the Greek language on a wide variety of topics, ranging from music theory to Homer to vegetarianism. His Isagoge, or Introduction, an introduction to logic and philosophy, was the standard textbook on logic throughout the Middle Ages in its Latin and Arabic translations.” - Wikipedia

“The late ancient philosopher Porphyry was one of the founders of Neoplatonism. He edited the teachings of Plotinus into the form in which they are now known, clarified them with insights of his own and established them in the thought of his time. But, in reaction to Plotinus, he also advanced the cause of Aristotle’s philosophical logic. Indeed, Porphyry is responsible for the resurgence of interest in Aristotle, which continued to the Middle Ages and beyond. Because of Porphyry, later Greek philosophy recovered both its Platonic and its Aristotelian roots, and Neoplatonism aimed to combine inspired thought with academic precision. He was a scholar of great learning, with interests ranging from literary criticism and history to religion. An example is his defence of vegetarianism, which anticipated the modern debate on ecological preservation.” - Routledge

See pictures. The manuscript that once wrapped this binding left a ghost of its lettering behind on the boards. The binding corners are worn and chipped; the edges are worn also. The vellum has cracked over the spine's bands, exposing the bands; some other vellum cracking along spine. Forms of the title are written on the bottom and fore-edge of the textblock. Hinges cracked, boards holding by the cords. Blue "CVG/656" on flyleaf. Toned and thumbed throughout, with an occasional fox spot and page edge chip. Several names on title page. Several tiny worm holes at very bottom/gutter of title page. Also, several small worm holes at fore-edge margin that mid-book form a little more into tracks and just touch the text. 2 cm stain fore-edge margin of a4 that ghosted to facing page (a3). b3 bottom corner tear, no text affected. Occasional marginal annotations and underlining throughout, not trimmed (contemporary size, likely not trimmed for rebind). 1" ink spot on 246.