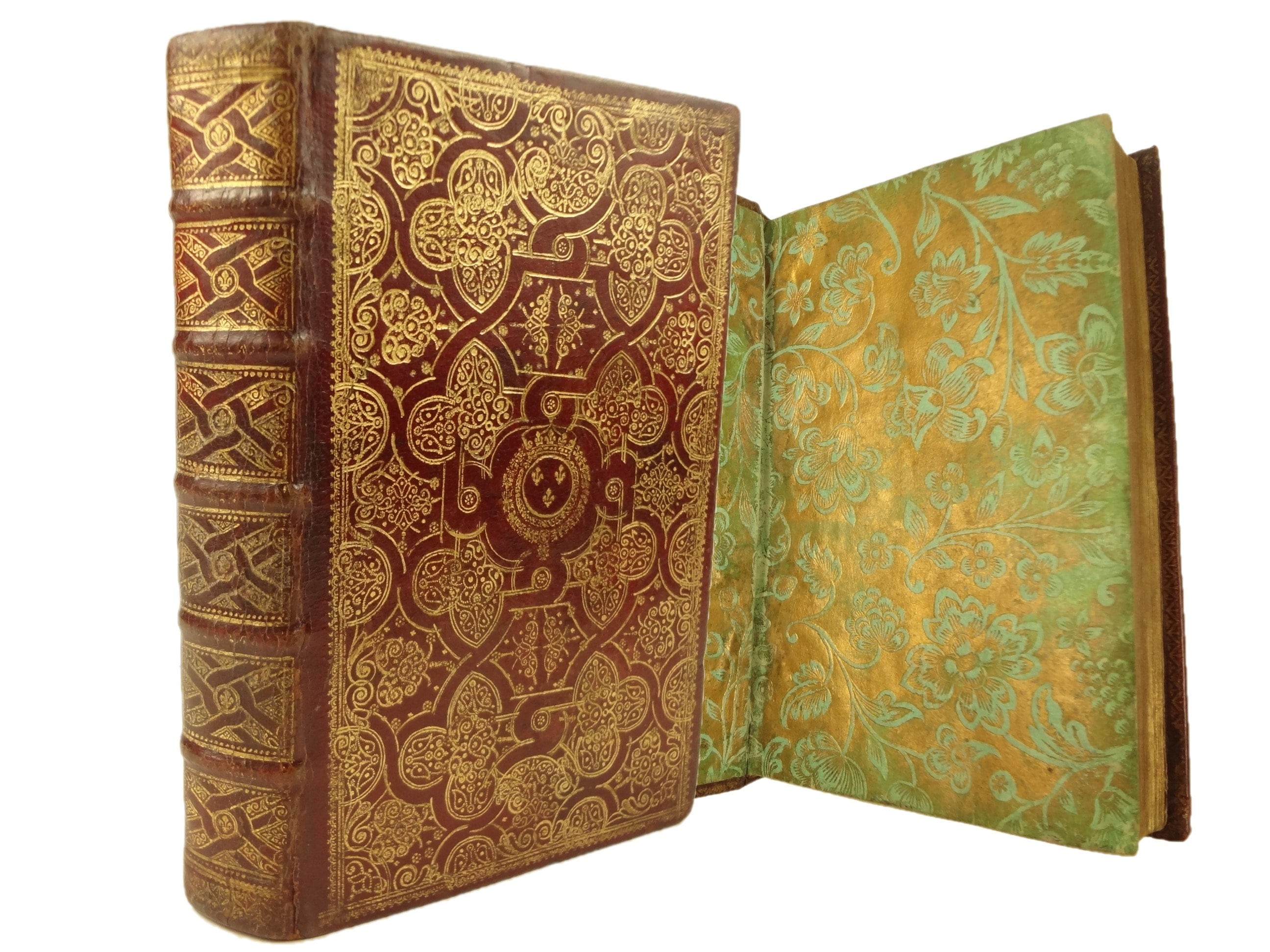 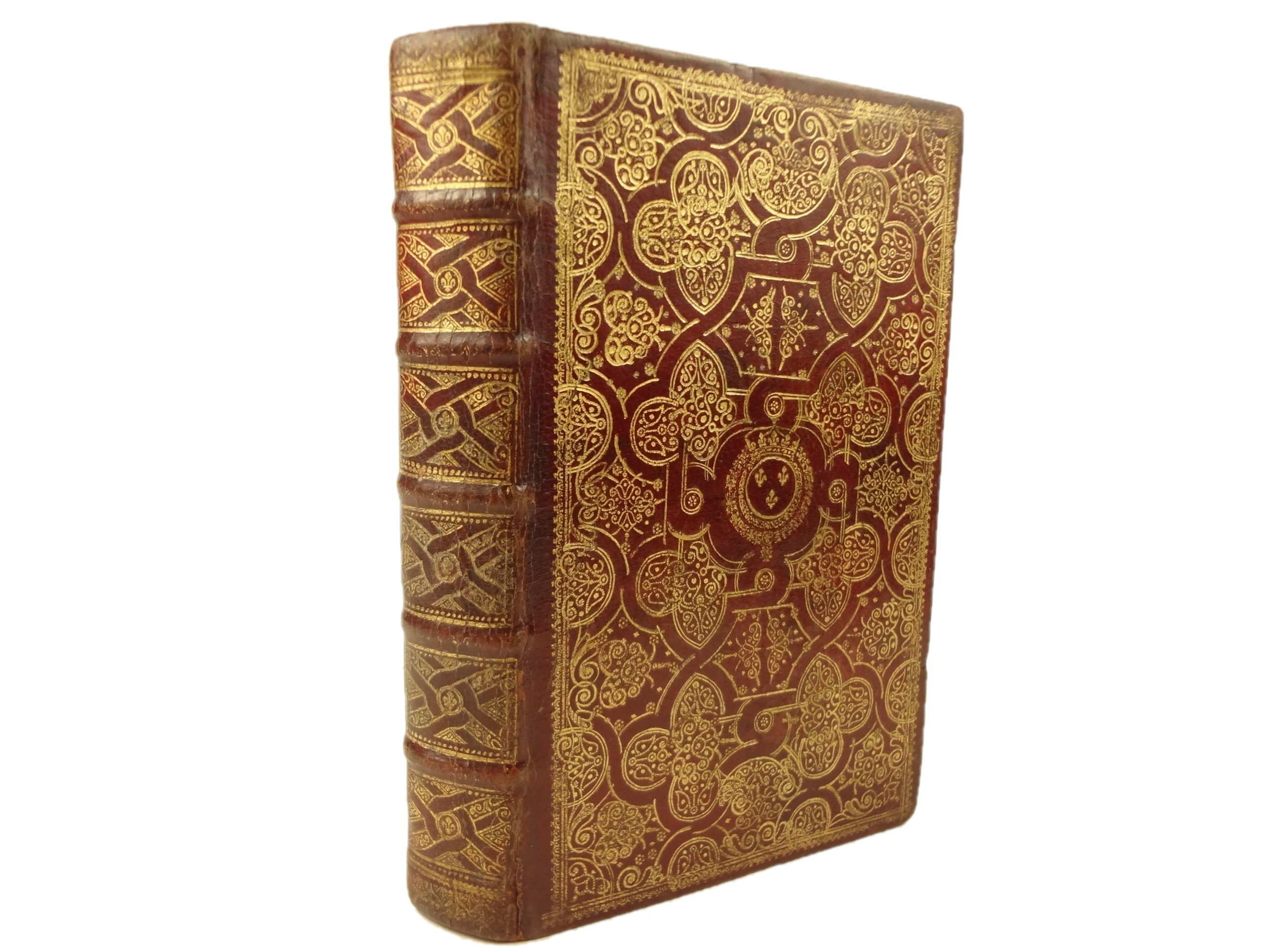 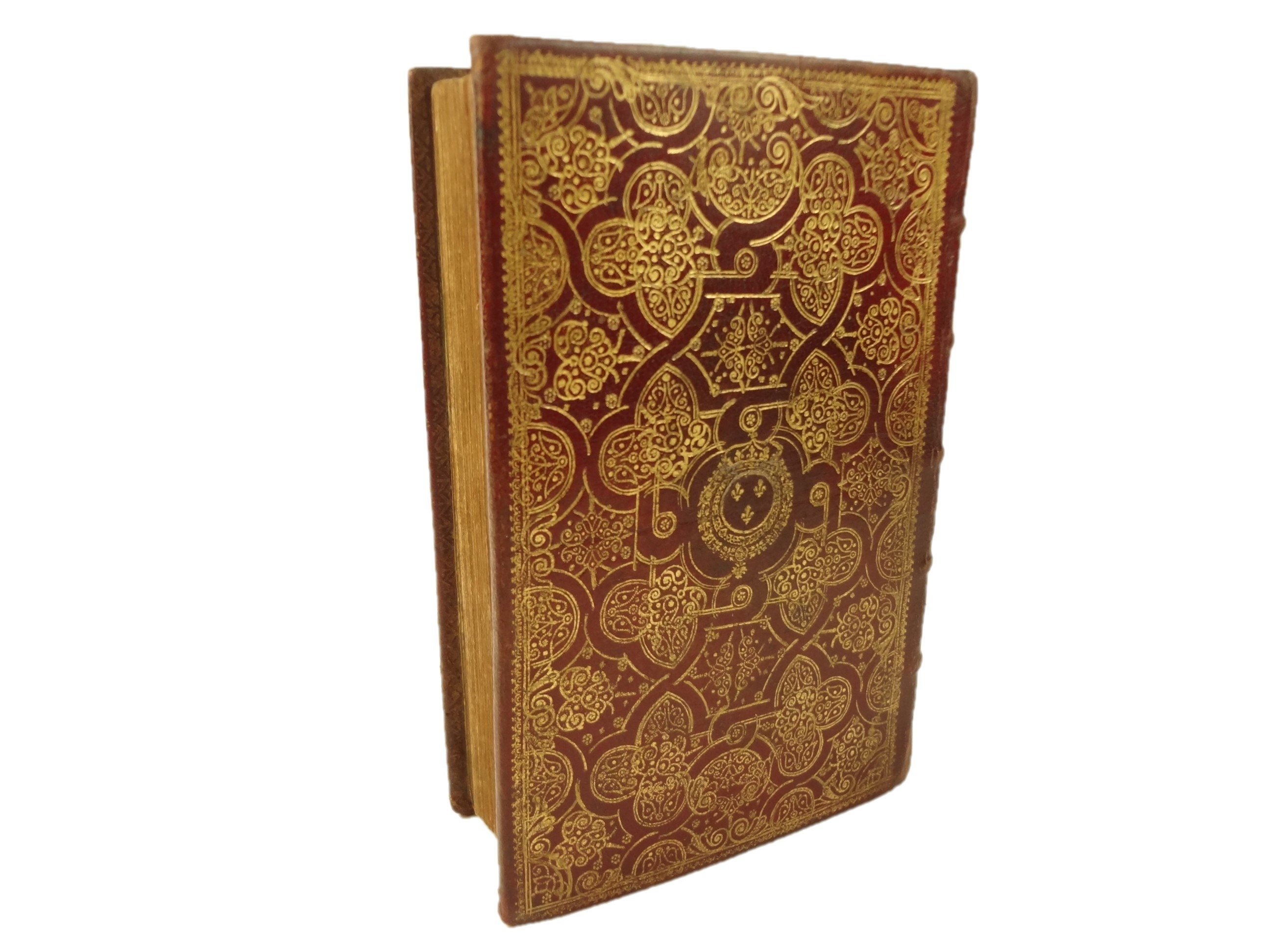 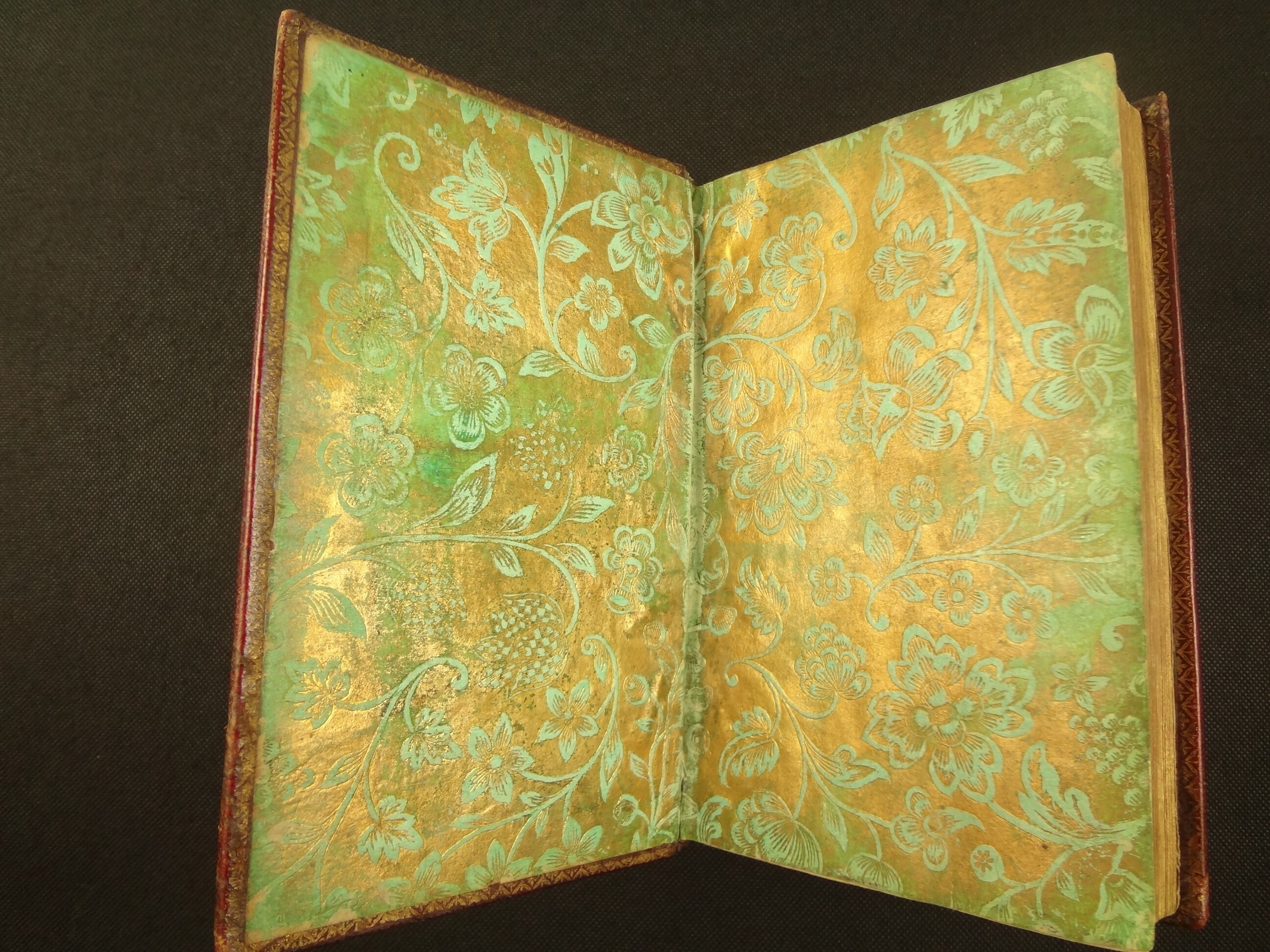 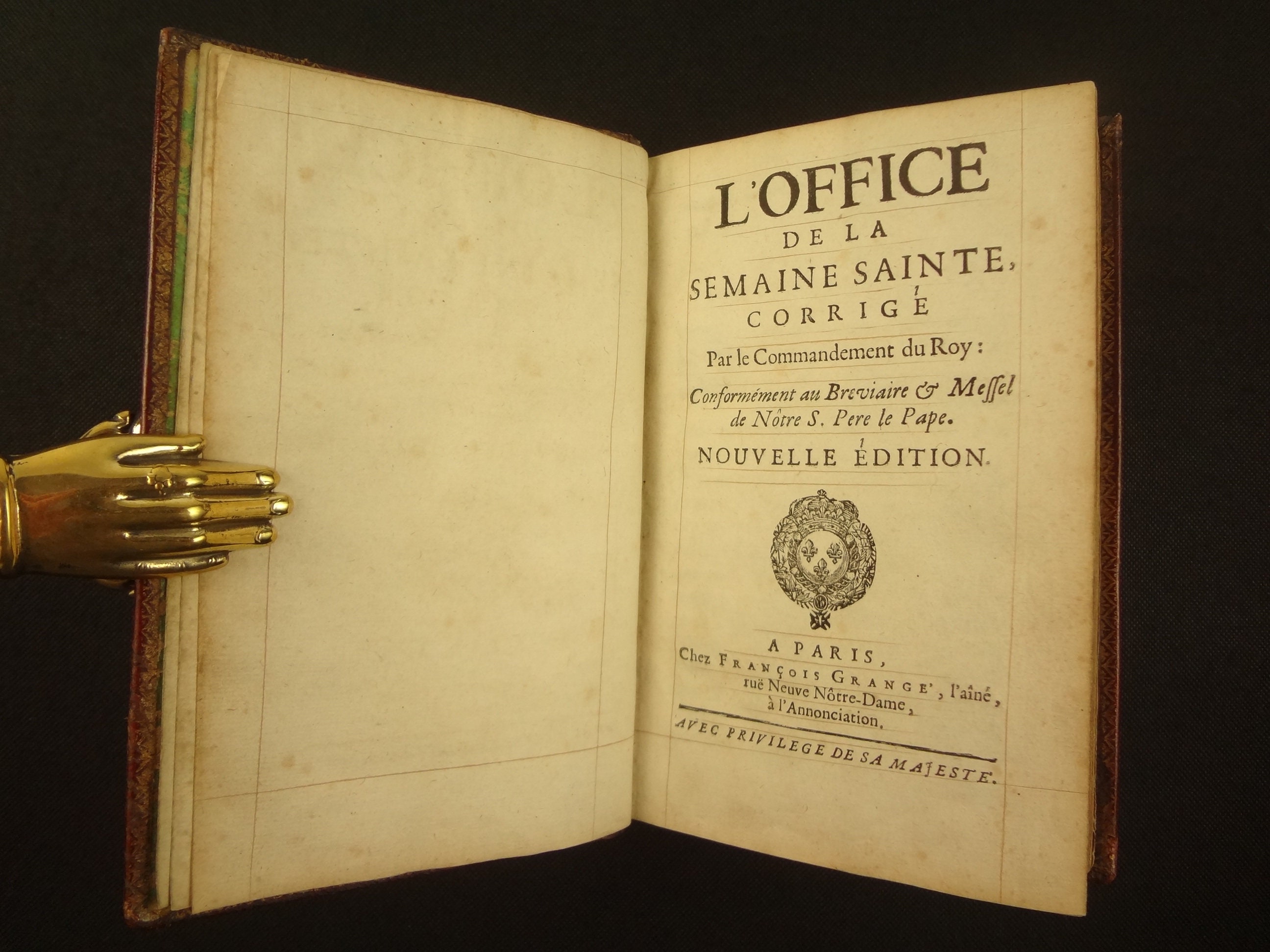 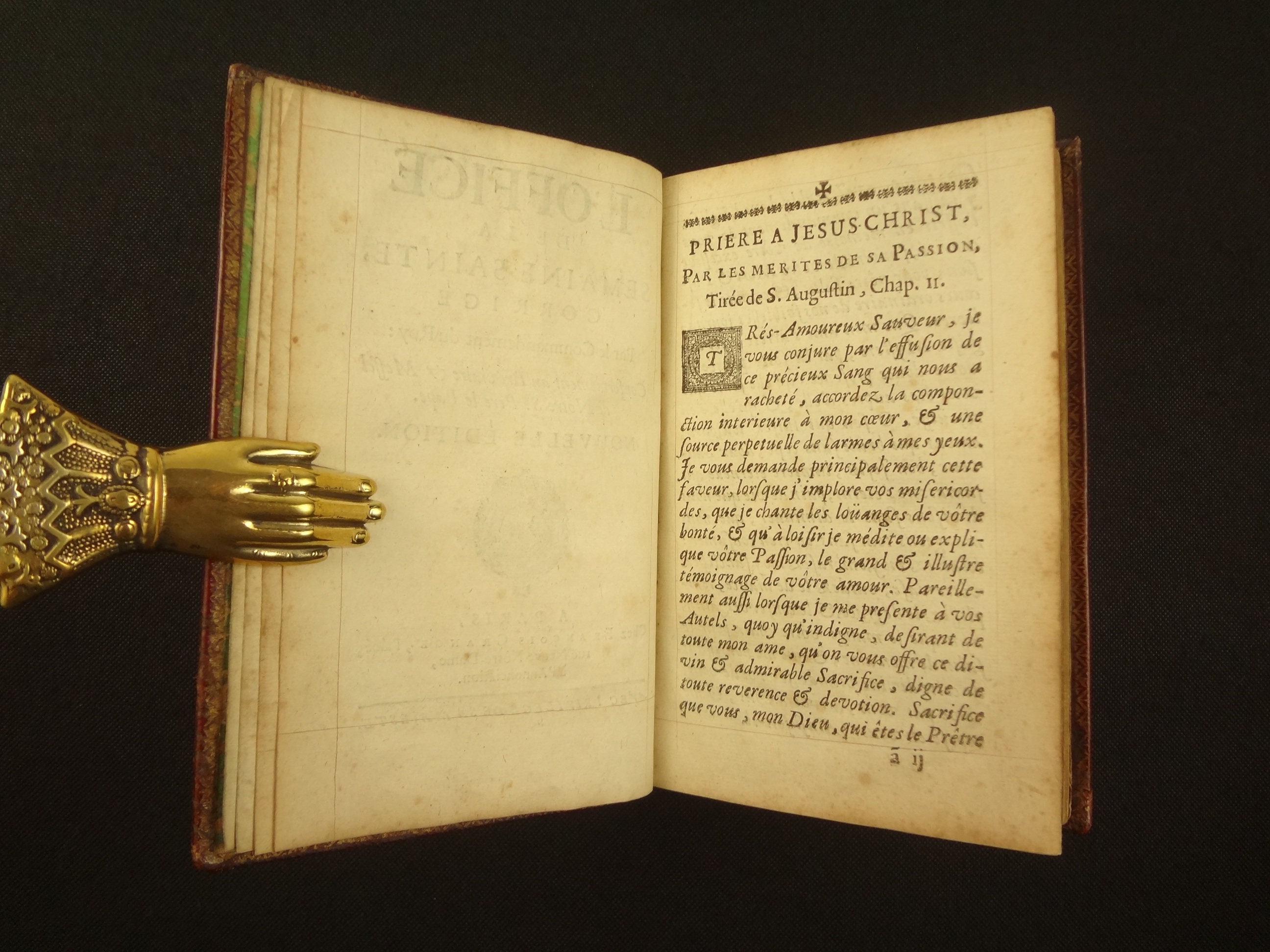 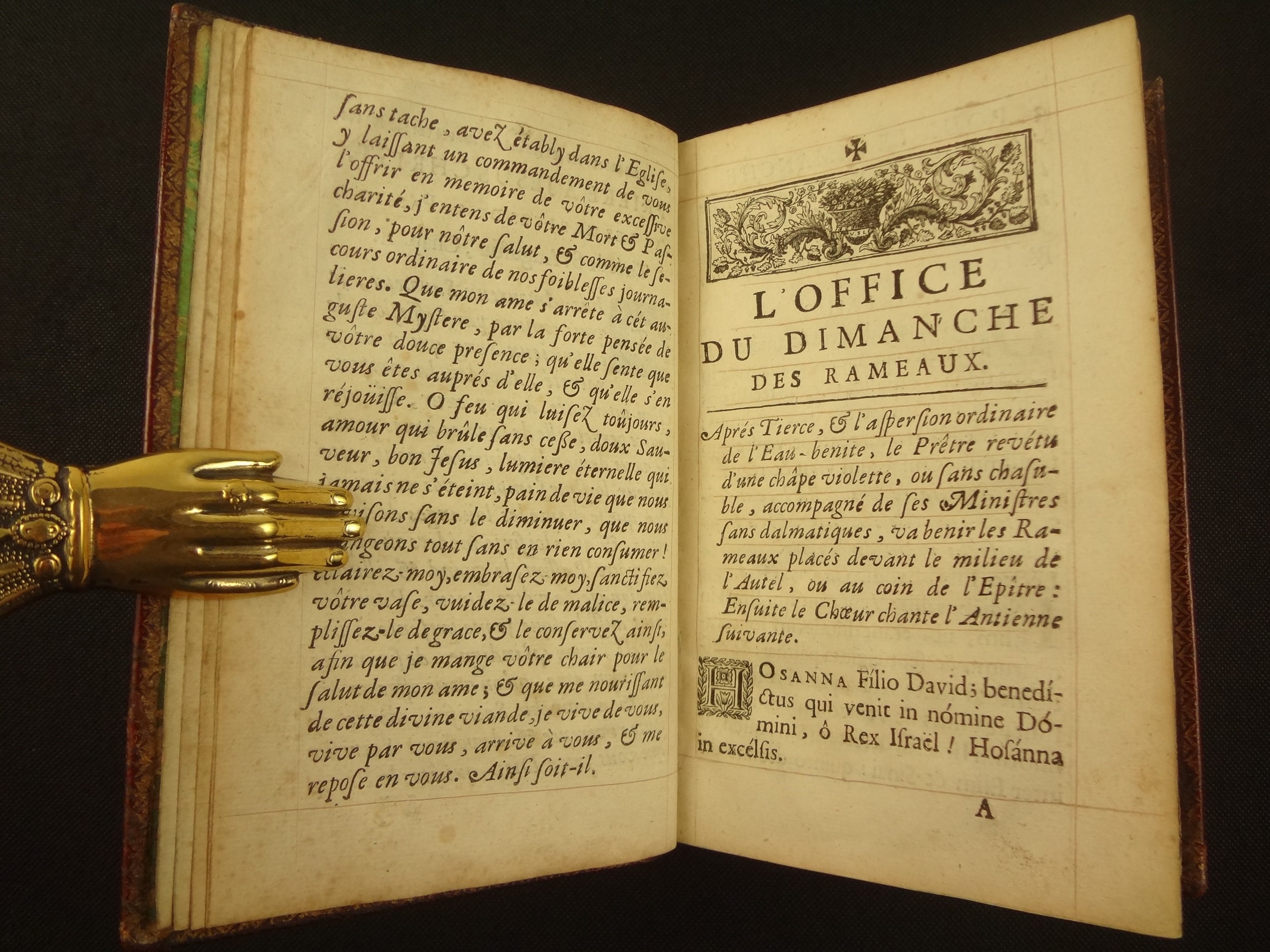 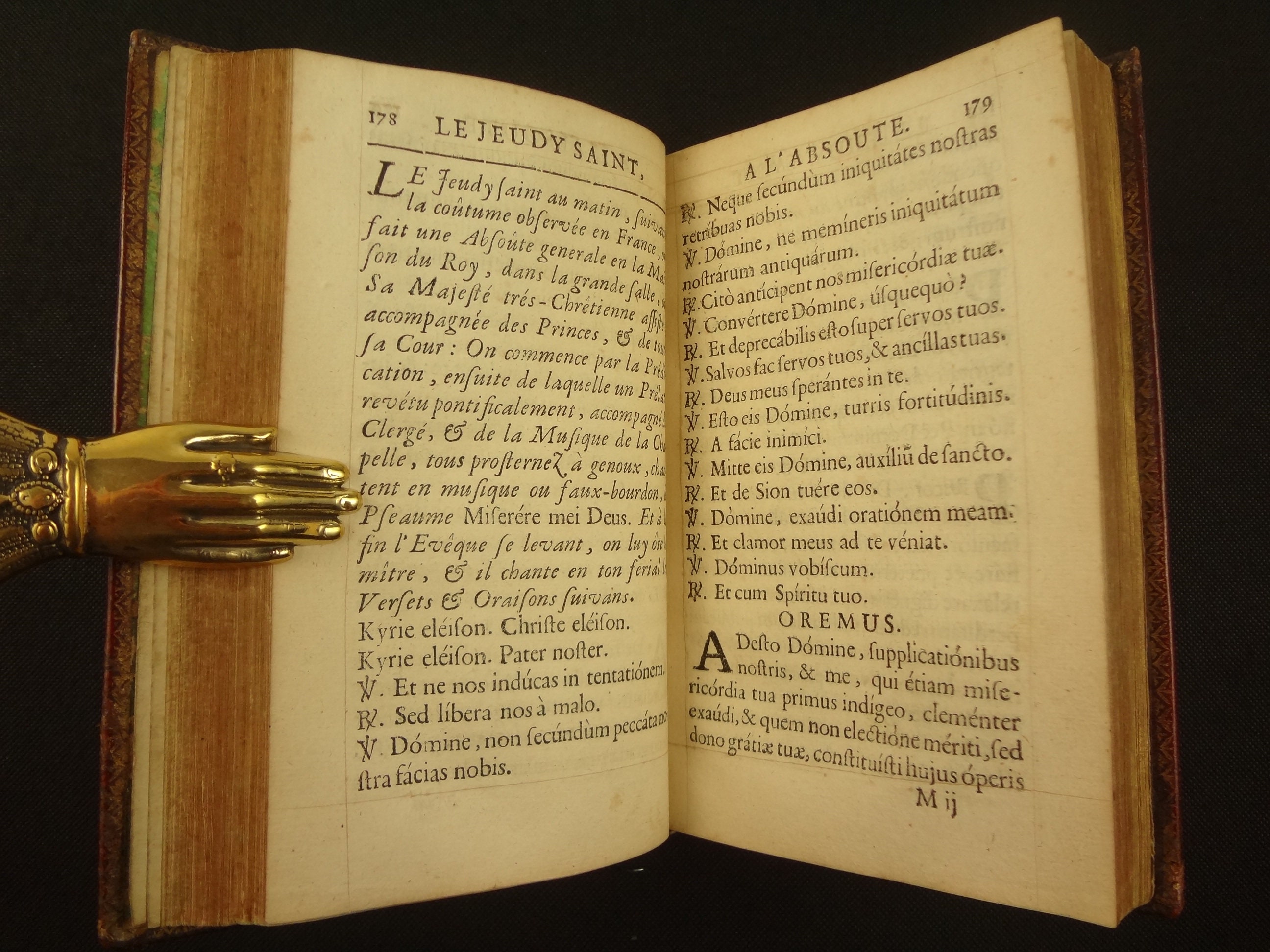 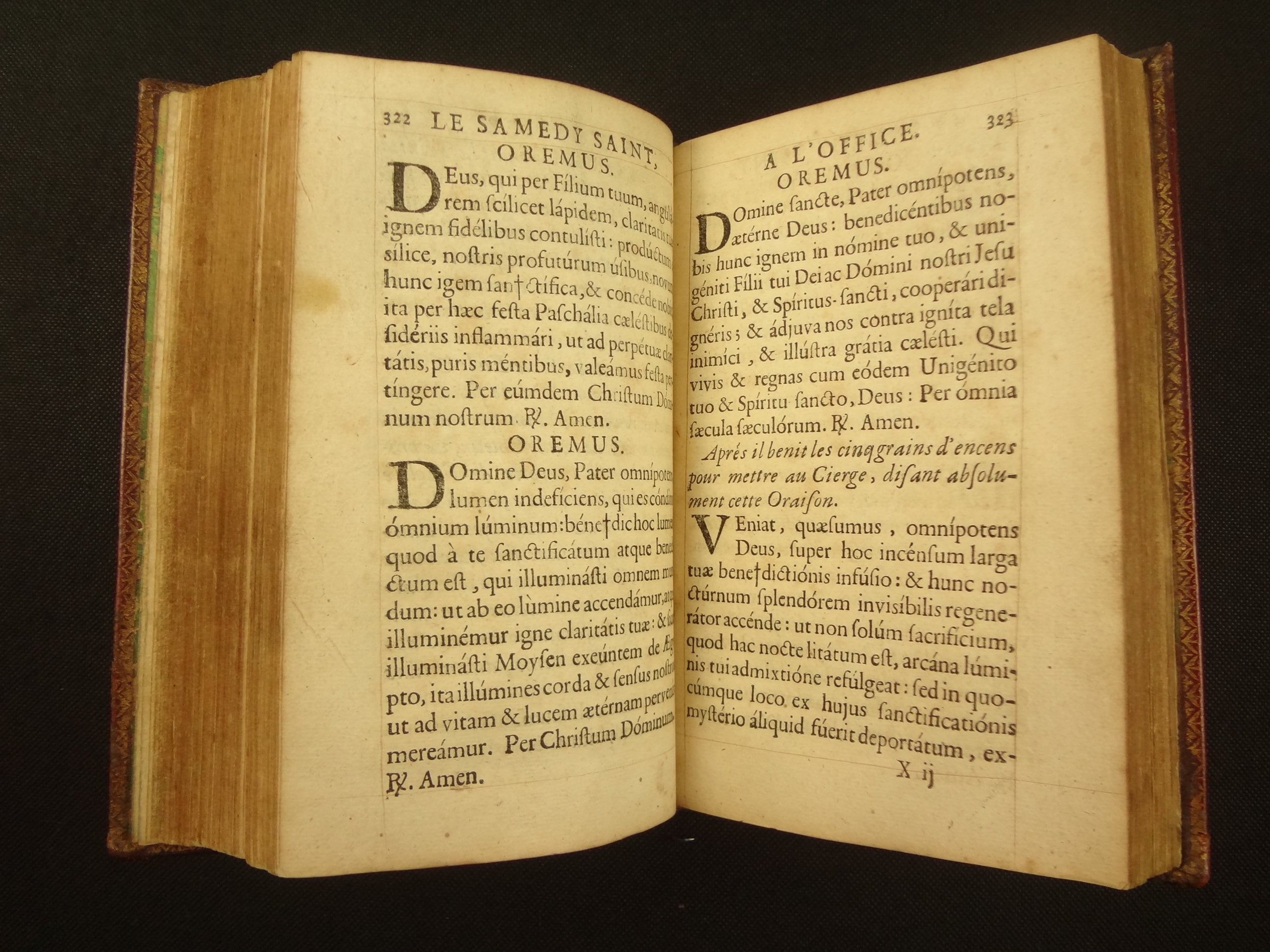 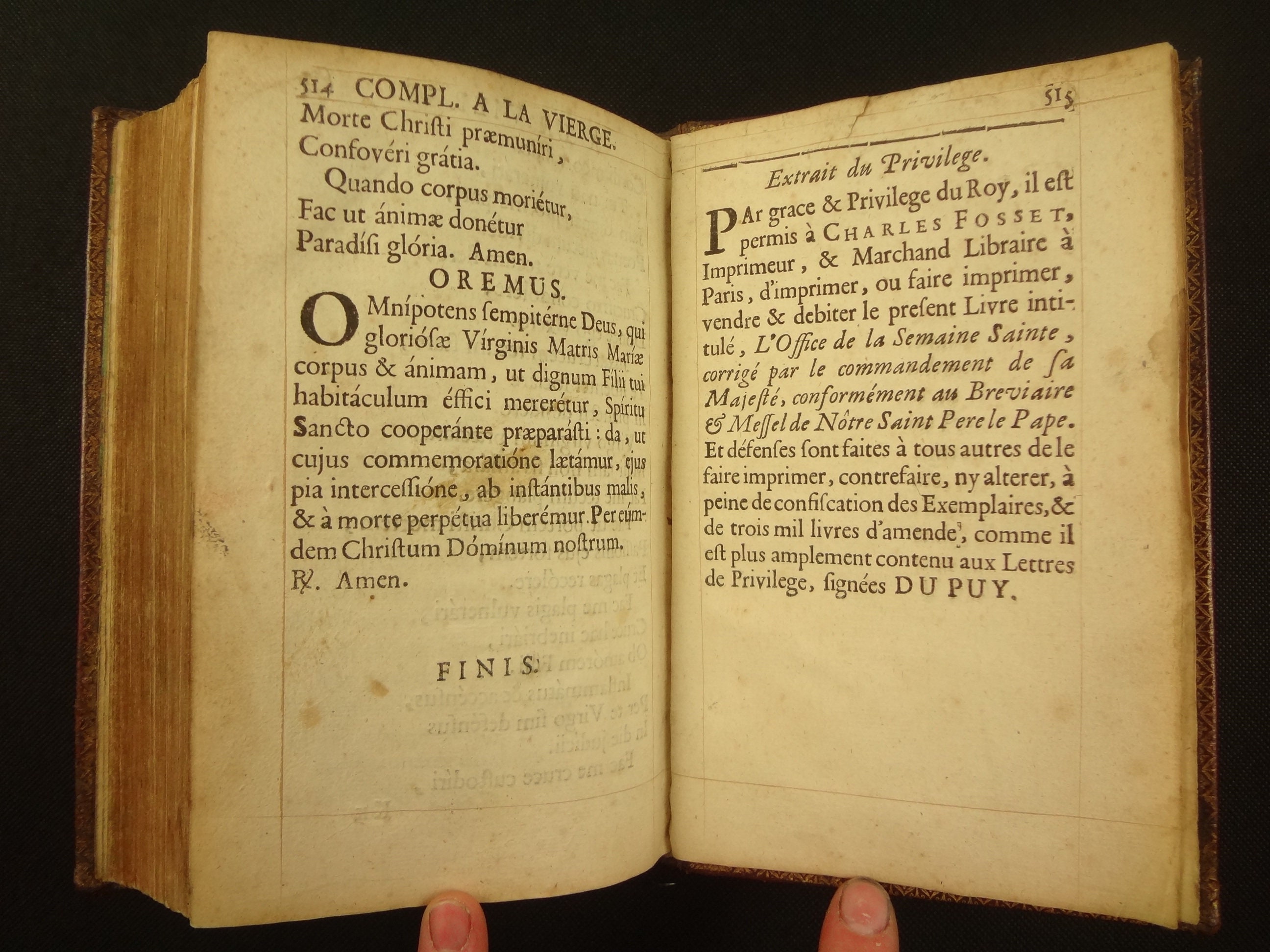 A handsome binding decorates this circa 1710 L'Office de la Semaine Sainte. The tools used to decorate the binding are related to the French bindery identified as "Caumartin", whose work has been found in a variety of royal libraries.

A near exact match for this binding, identifying it as a likely work of the Atelier des Caumartin, can be found in the British Library's binding collection, shelfmark Davis469. Davis469 is identified as being owned by King Louis XIV by the British Library. This binding lacks the monograph found on Davis469 (under the arms on Davis469). This copy does have the royal arms on the title page, in place of a publisher's mark.

Cyclopaedia has a lengthy article with a comparison of the tools found on Davis469, which you'll see are also used on this example.

Also, this example is ruled in red, by hand, throughout, which was indicative of a wealthier purchaser (it was an additional fee to have the book ruled).

This edition of the Semaine Sainte seems to be rare. Worldcat records only one copy with the publisher listed as Francois Grange, OCLC record 470993040. It resides in the Bibliotheque National de France. At the rear, the royal printing privilege reveals the printer to be Fosset. The BNF lists Grange as a bookseller (FRBNF12239173) selling from 1708-1725. The last edition of the Semaine Sainte with Fosset listed in the printer's area of the title page was printed in 1700, per Worldcat. That means this edition was likely published early in Grange's selling career (there is no date within).

Of interest, by comparing the front and rear board you'll find the tools are not in the exact same location, meaning this beautiful binding was executed by hand, each tool being applied individually! I'd read a theory that these bindings were done by press, but surely not in this example, with much overlaying of the tools and small differences in tool location between the two boards.

The personal touches don't end with the binding and ruling. The owner of this work was devout, with evidence of thumbing along the fore-edge and about one dozen instances where the owner found the text to be wrong, struck-through a word and corrected it. Also, the owner used several pieces of string to mark their favorite pages (in addition to the ribbon).

Measures approx. 19 x 12 x 4 cm. Burgundy-red morocco binding, richly tooled in gilt in a fanfare design. Tools attributable to the binder Caumartin. Five raised bands to the spine; six compartments with a central fleur de lis encircled by a fanfare design, and with several rolls at the ends of the spine. Turn-ins rolled in gilt. Dutch-gilt endpapers. All edges gilt.

See pictures. Binding with some wear at the edges and corners and a little crazing along the joints. Gilt to binding with a little rubbing/loss. Binding slightly splayed (rests slightly open), but just barely. Paper throughout toned with light foxing here and there, more towards edges. Graphite numbers on verso of flyleaf. Some thumbing along fore-edge, on occasion, throughout. Occasional moisture mark at fore-edge margin, no text affected. Graphite strike-through and correction to text at 111, 117, 131, 161, 212, 213, 217, 225, 231, 242, 245, 246. Heavy thumbing to fore-edge 133. Small candle ember hole 185. Light ink spot 189-192. 287 bottom corner small dog-ear. Moisture mark bottom margin of 321. Moisture mark bottom margin corner 337-end. Privilege with small tear in upper-margin.