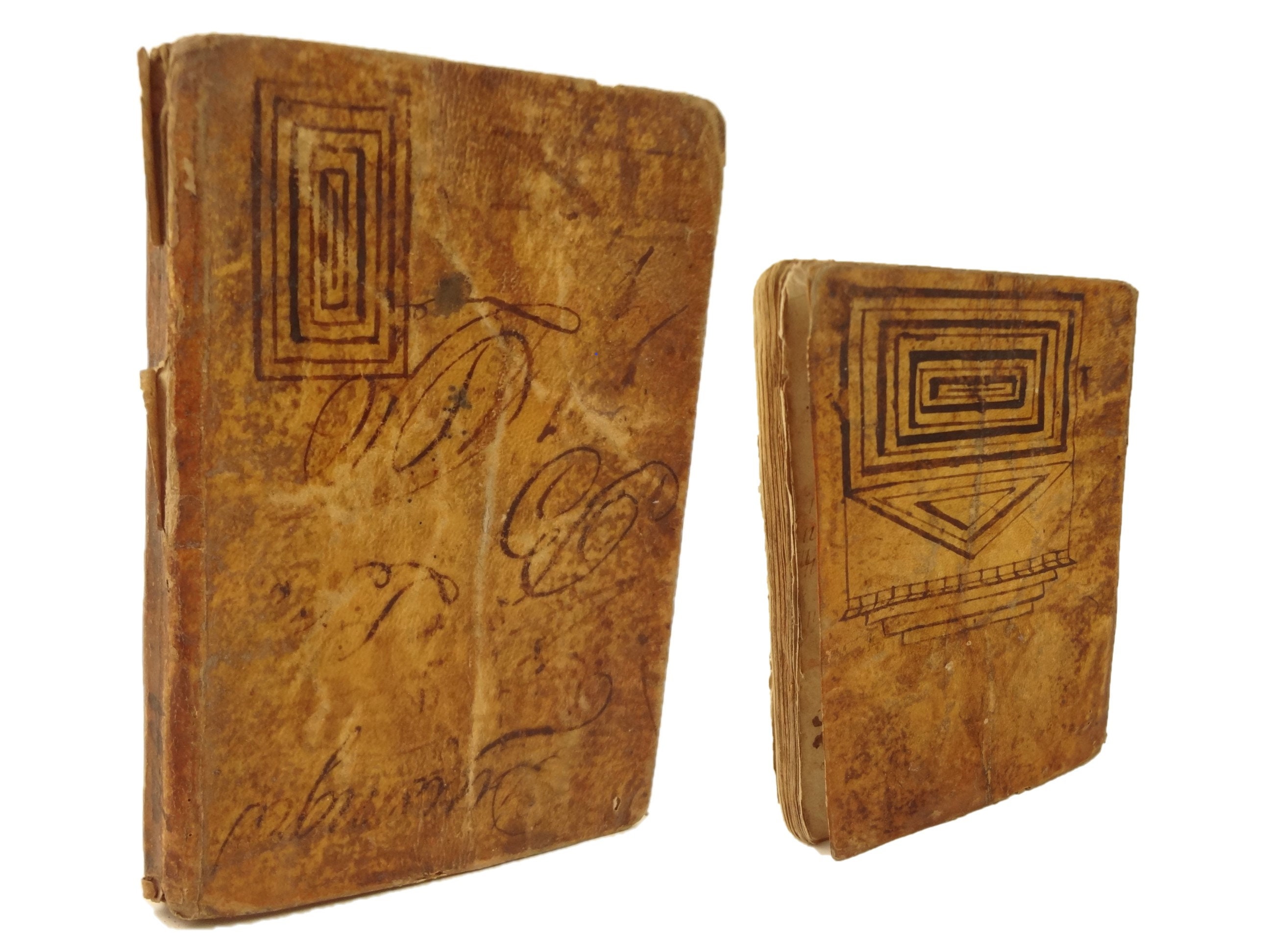 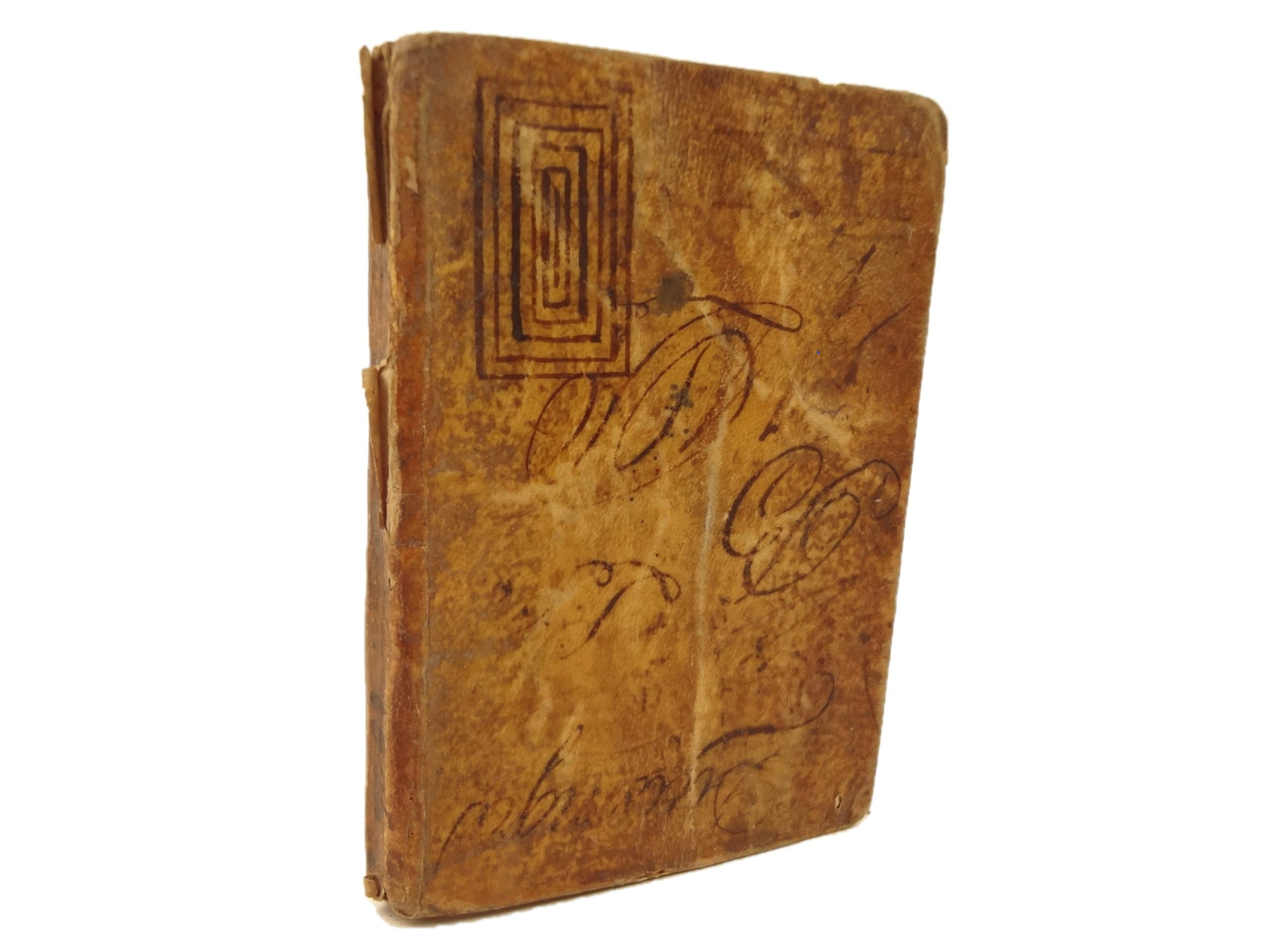 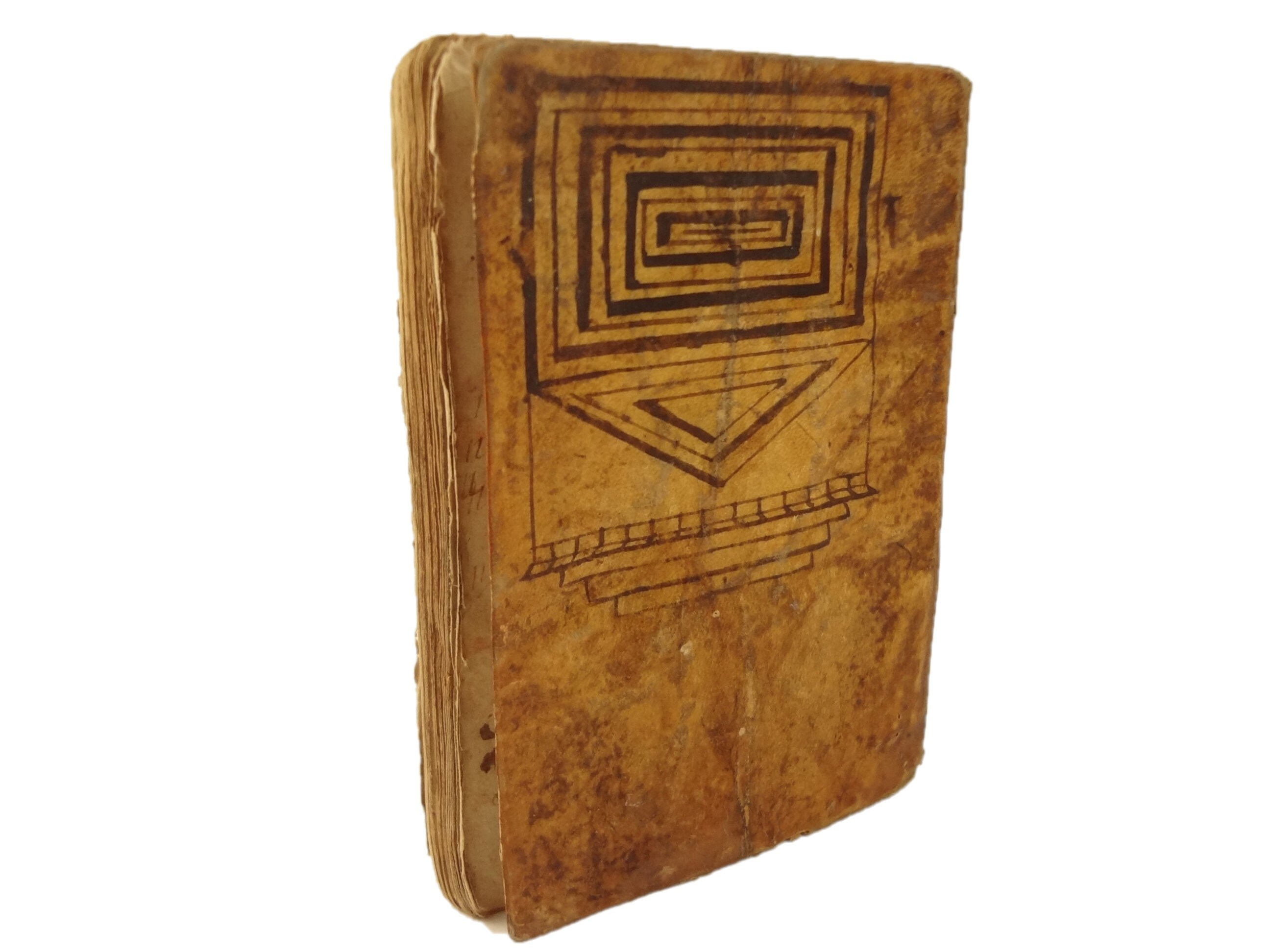 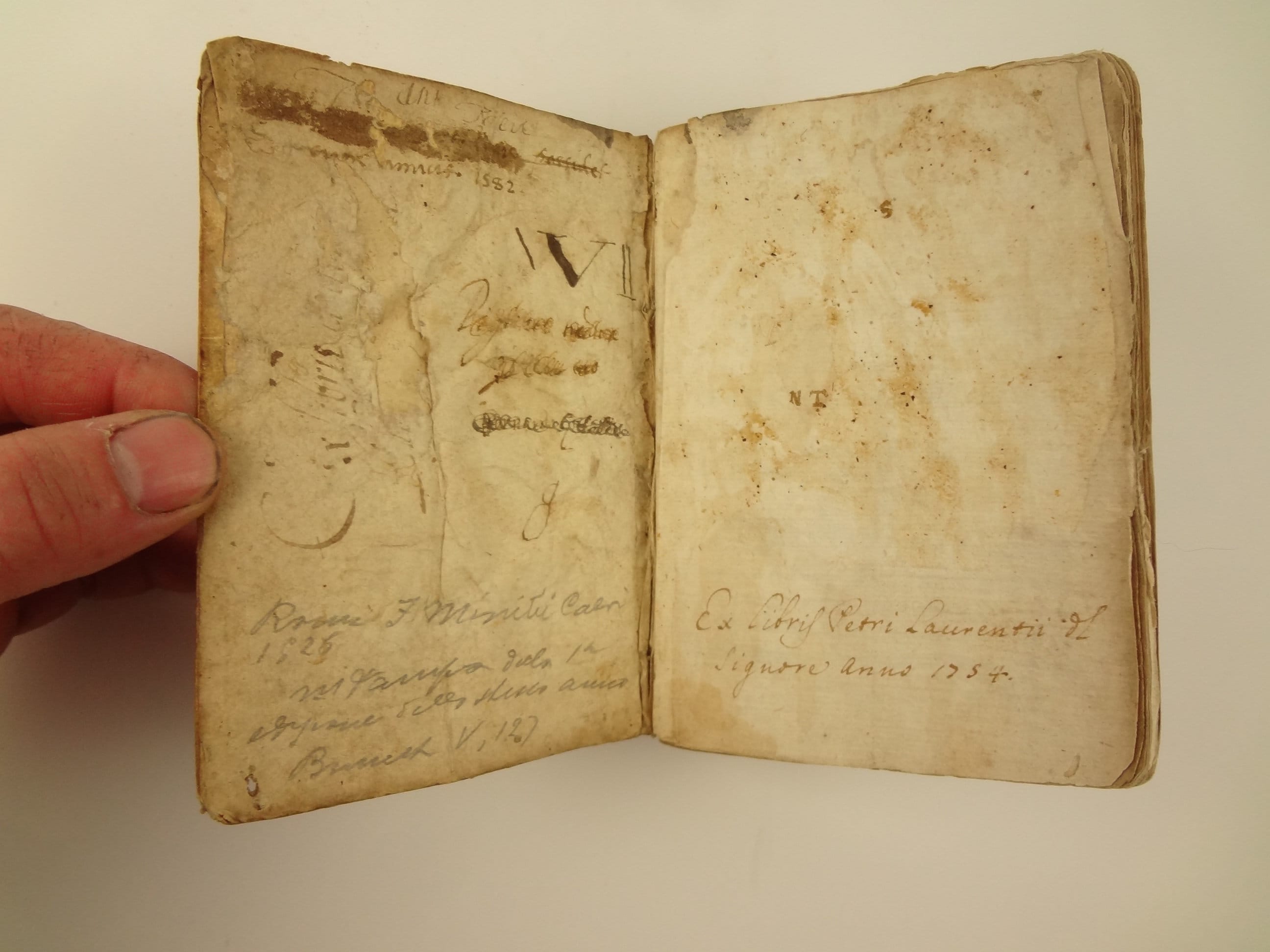 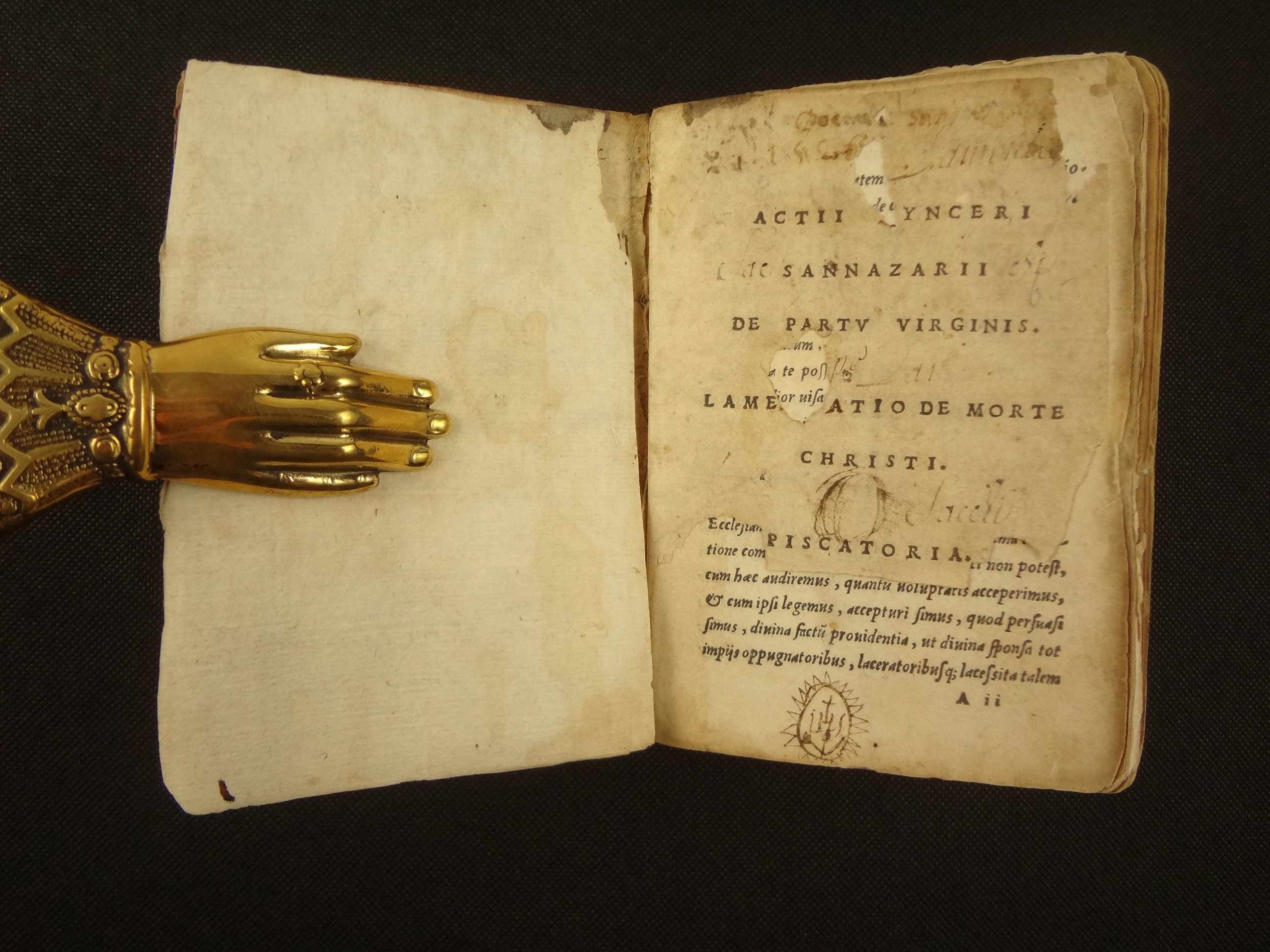 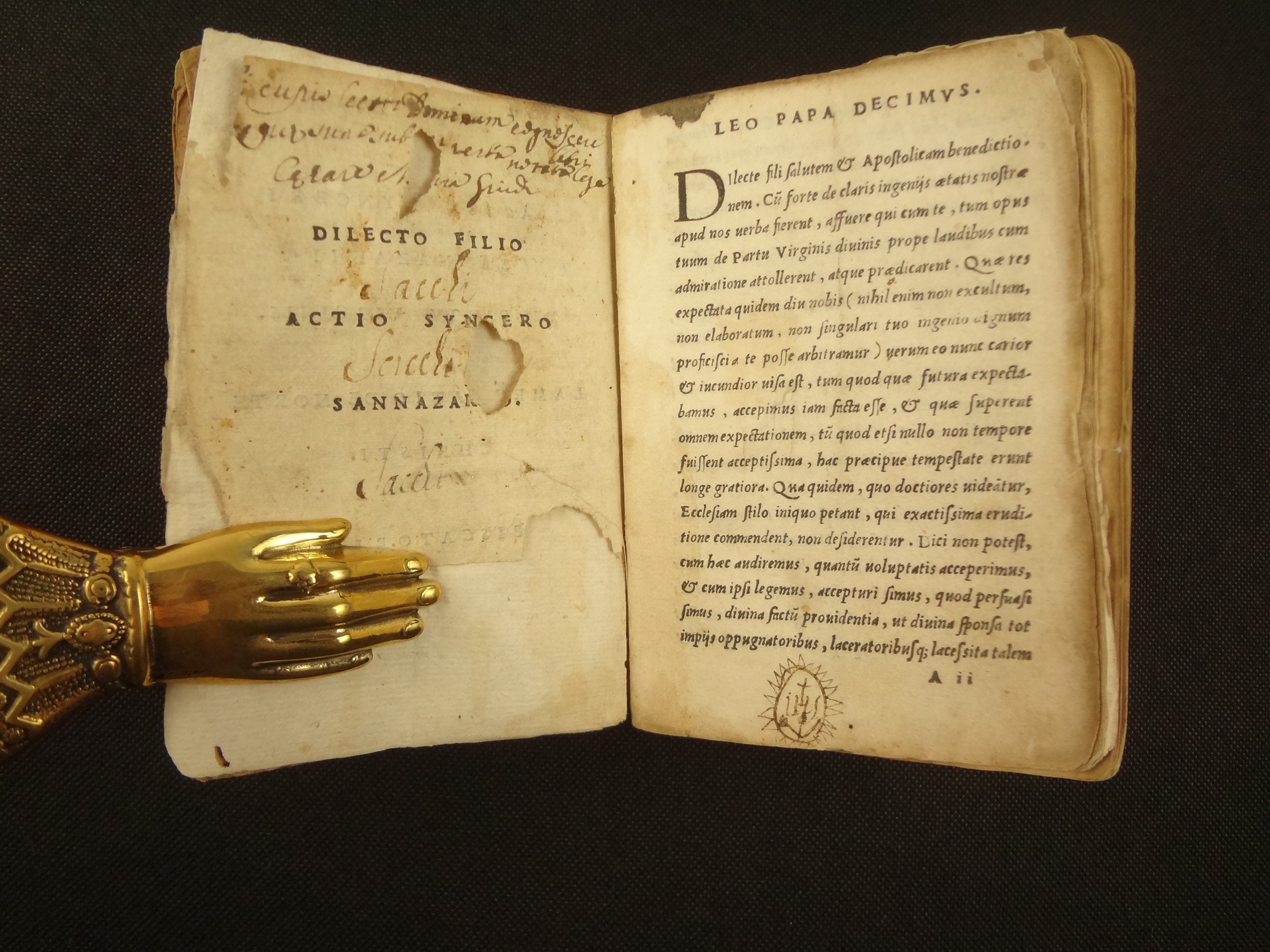 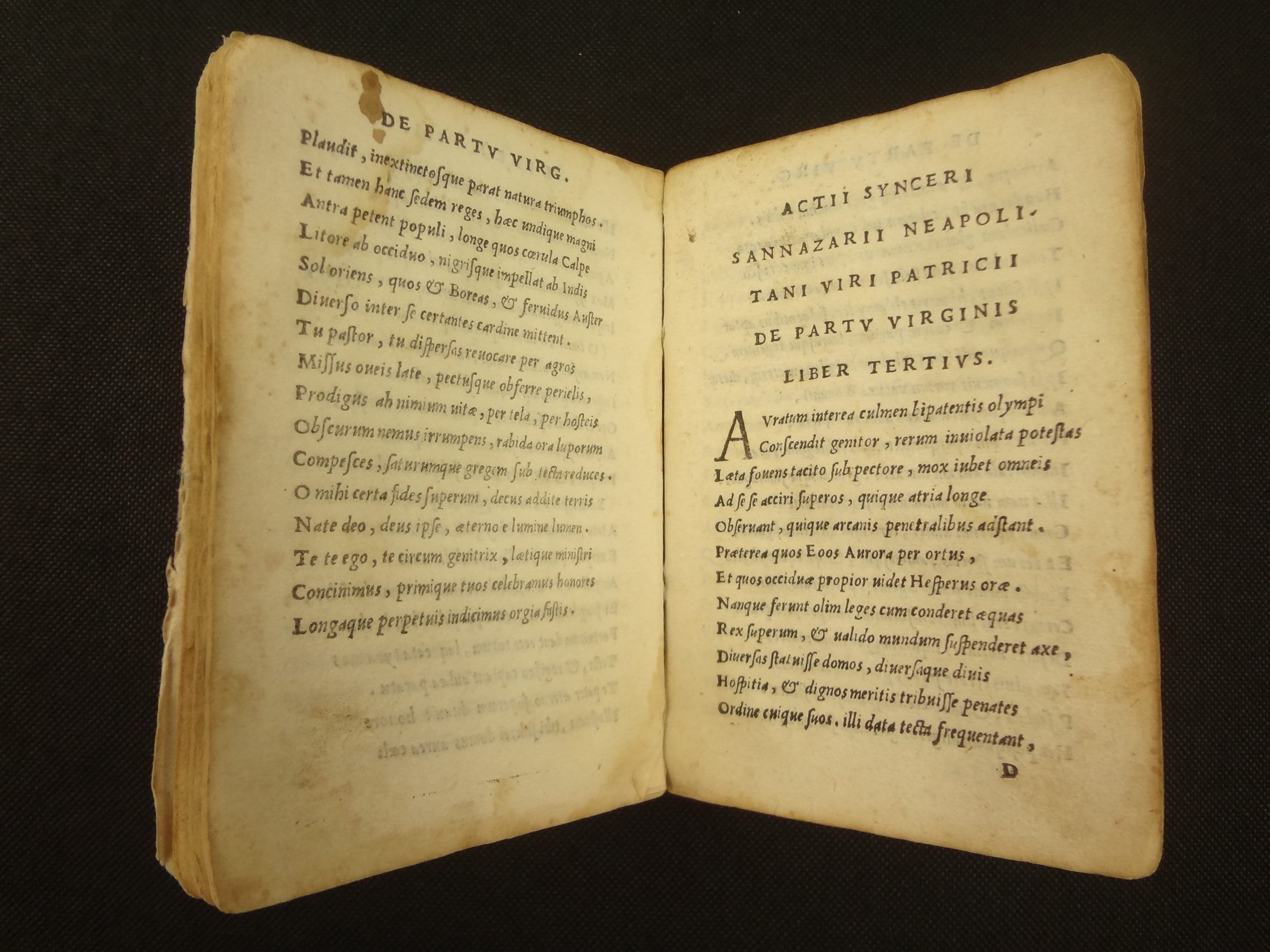 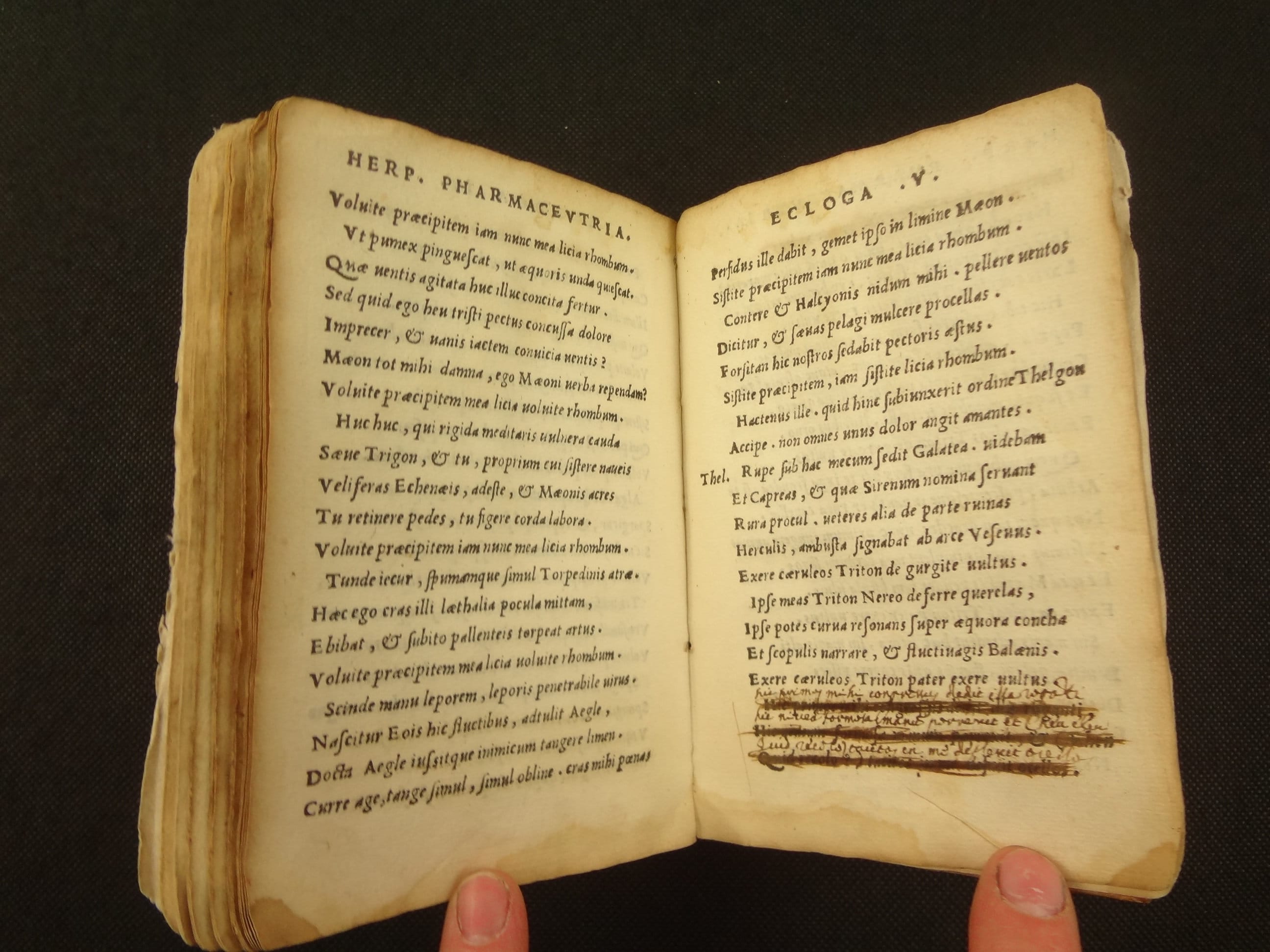 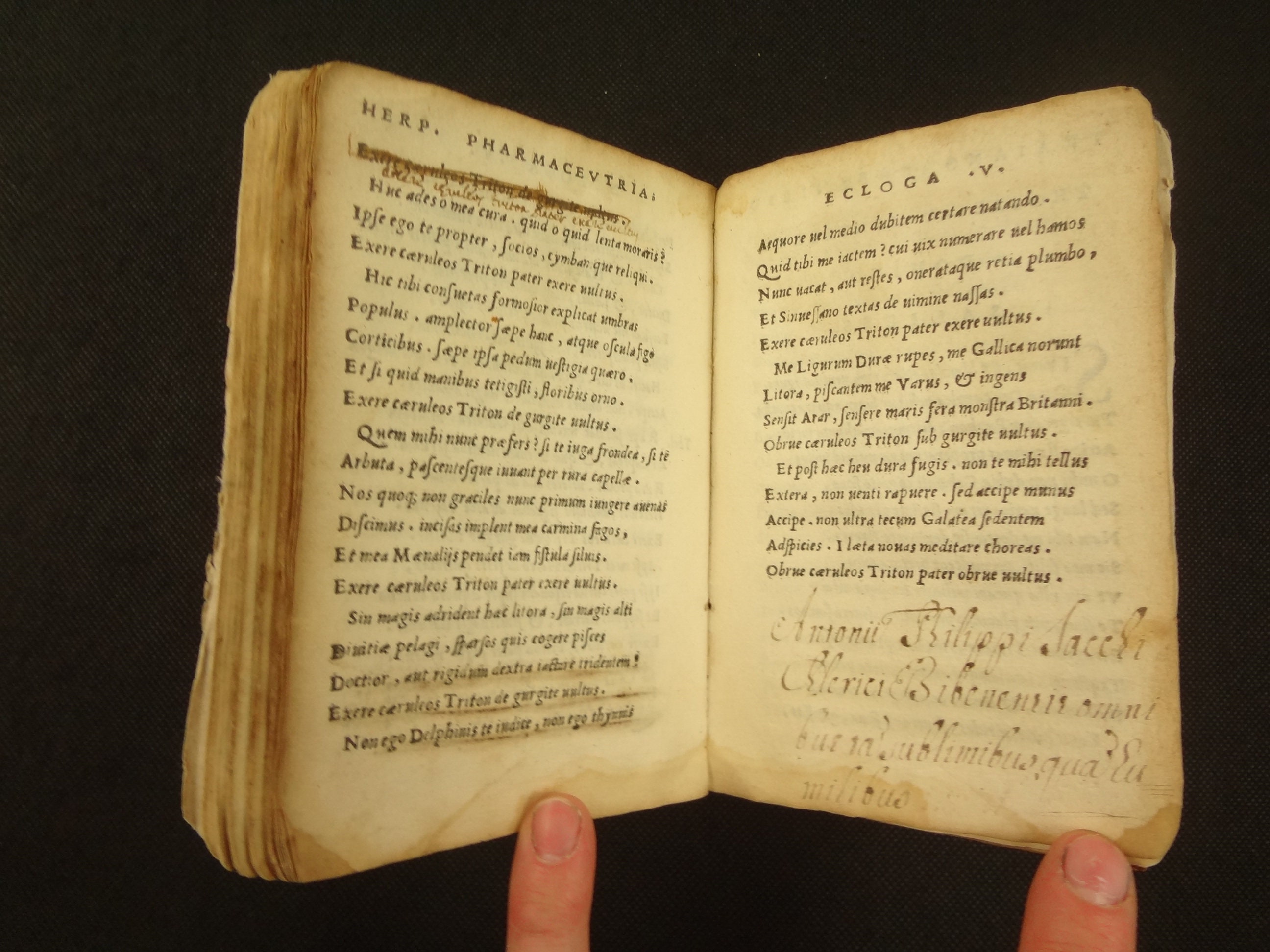 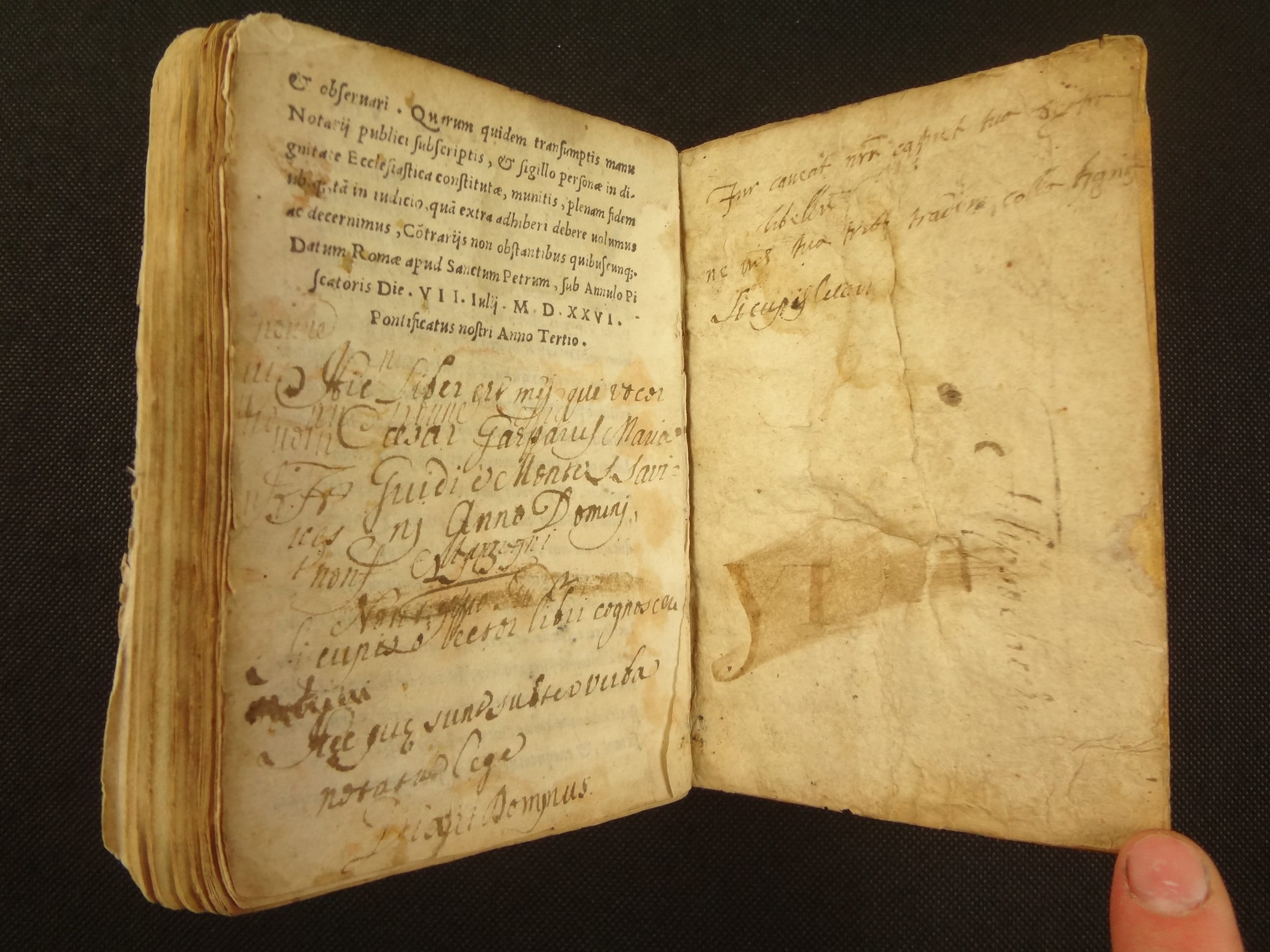 1526 2nd state (published in Rome) of the 1st edition of Sannazaro's publishing of his works De Partu Virginis (a celebration of Mary), Lamentio de Morte Christi (Lament on the Death of Christ), Salices (a work on willows) and his piscatorial (fishing, like pastorals were to sheep) work Piscatoria.

A fascinating work, previously Sannazaro had enjoyed great success with his pastoral work Arcadia, considered the first great pastoral work in Renaissance Europe. Here, he attempts to produce a work in the pastoral Virgillian bucolic style, but based instead on fishing around the Bay of Naples; this he titled (and has been known since as) Piscatoriae (or, Piscatorials). Reception was mixed, some having a hard time accepting that a pastoral could be shifted to the sea.

"In 1526, Jacopo Sannazaro (1458-1530), the Italian humanist and poet from Naples, published a collection of five Neo-Latin eclogues entitled Eclogae Piscatoriae. He had already authored a hugely influential text in the history of the Western pastoral tradition (the vernacular Arcadia) but, while the Piscatory Eclogues had their admirers and imitators, these poems provoked a debate for many later readers over their authenticity as pastoral poems, due to one essential innovation: Sannazaro exchanged the bucolic countryside and shepherds of classical pastoral for the seashore and its fishermen." - Piscatory Eclogues and the Question of Genre, Erik Fredericksen (2014).


Also printed within, Sannazaro's now seldom-read sacred poem in Latin, De partu Virginis, which gained for him the name of the "Christian Virgil", was extensively rewritten in 1519–21 and appeared in print, 1526. It has been characterized as "his version of Mary's Magnificat". The Pope Leo X read the work, before its printing (and his passing), and included is his favorable response.

This edition (per Brunet) is a re-issue ("Reimprime" - Brunet) of the Neapoli edition issued in May of 1526; I've seen the Neapoli edition and typology is the same. The 1844 Le Opere Latine di... Sannazaro (page 325) notes that this is the 1st printing to include Clement VII's license.

Jacopo Sannazaro (1458 –1530) was an Italian poet, humanist and epigrammist from Naples. He wrote easily in Latin, in Italian and in Neapolitan, but is best remembered for his humanist classic Arcadia, a masterwork that illustrated the possibilities of poetical prose in Italian, and instituted the theme of Arcadia, representing an idyllic land, in European literature. Sannazaro's elegant style was the inspiration for much courtly literature of the 16th century.

Universal Short Title Catalogue numbers - 854627 and 854652. Quite a few copies in Italy, but only a handful outside.

At the time of listing, Vialibri shows no other copies on the market from 1526 (of either state).

At the June 1st, 1840 sale of the Bibliotheca Butleriana (by Christie and Manson) they call this printing "very rare" - Item 1701

The colophon is missing so, using a scanned online copy, I printed a simple facsimile on wove paper simply so that you could see/have the colophon's type/words; it is not intended to be an exact replica of the original.

Westwood and Satchell's Bibliotheca Piscatoria (1883, p188) lists Sannazaro's Piscatoria, stating "They are considered the most perfect works of this distinguished poet" (likely they are, from the view of the angling enthusiast).

See pictures. Heavily worn book. Binding is heavily soiled with delightful geometric shapes and manuscript doodles drawn on it. Pastedown with many notes, one dated 1527, others stating the Brunet page.

1st blank unpaginated (not from the printing) leaf loose, but with ex libris note from 1754.. 1st gathering loose. Title page with holes, chips, and missing bottom 1/3rd (after last printed text but holes do affect text, see picture); some writing on both sides. Ink stain at top-edge of 1st gathering. The Jesuit IHS seal is drawn at the bottom Aii. There are annotations, strikethroughs, etc. throughout. I think it was once edited, per the banned books list, but then the (few) struck-through passages were written in again later. Darkening and thumbing along edges, occasional page edge chip, dog-eared corner, fox spot, etc.. Some moisture marks; E gathering worst. Ink spots top edge C8. Last three leaves (H1-H3) loose. Many notes on H3. H4 (colophon) missing, provided in facsimile.