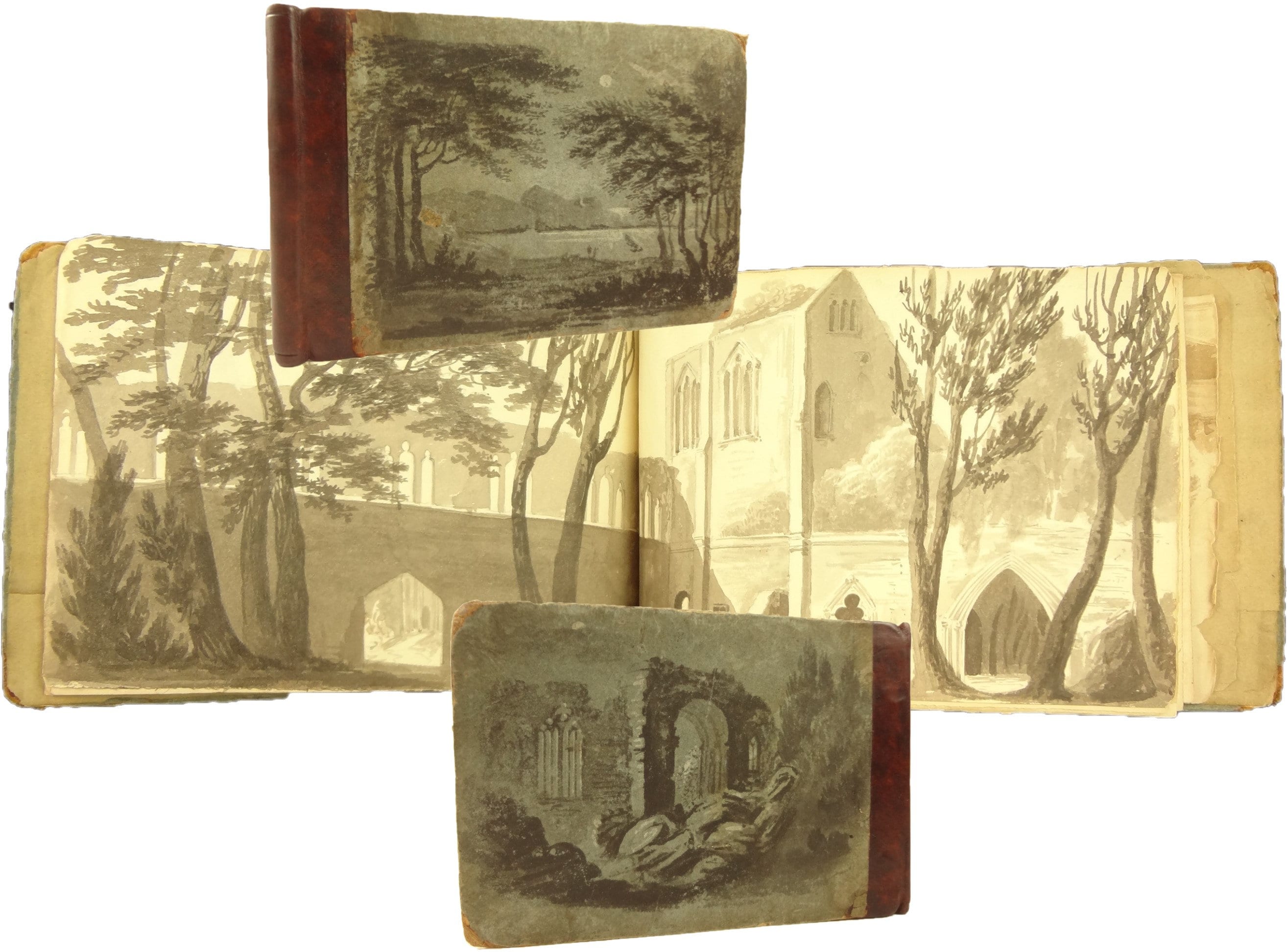 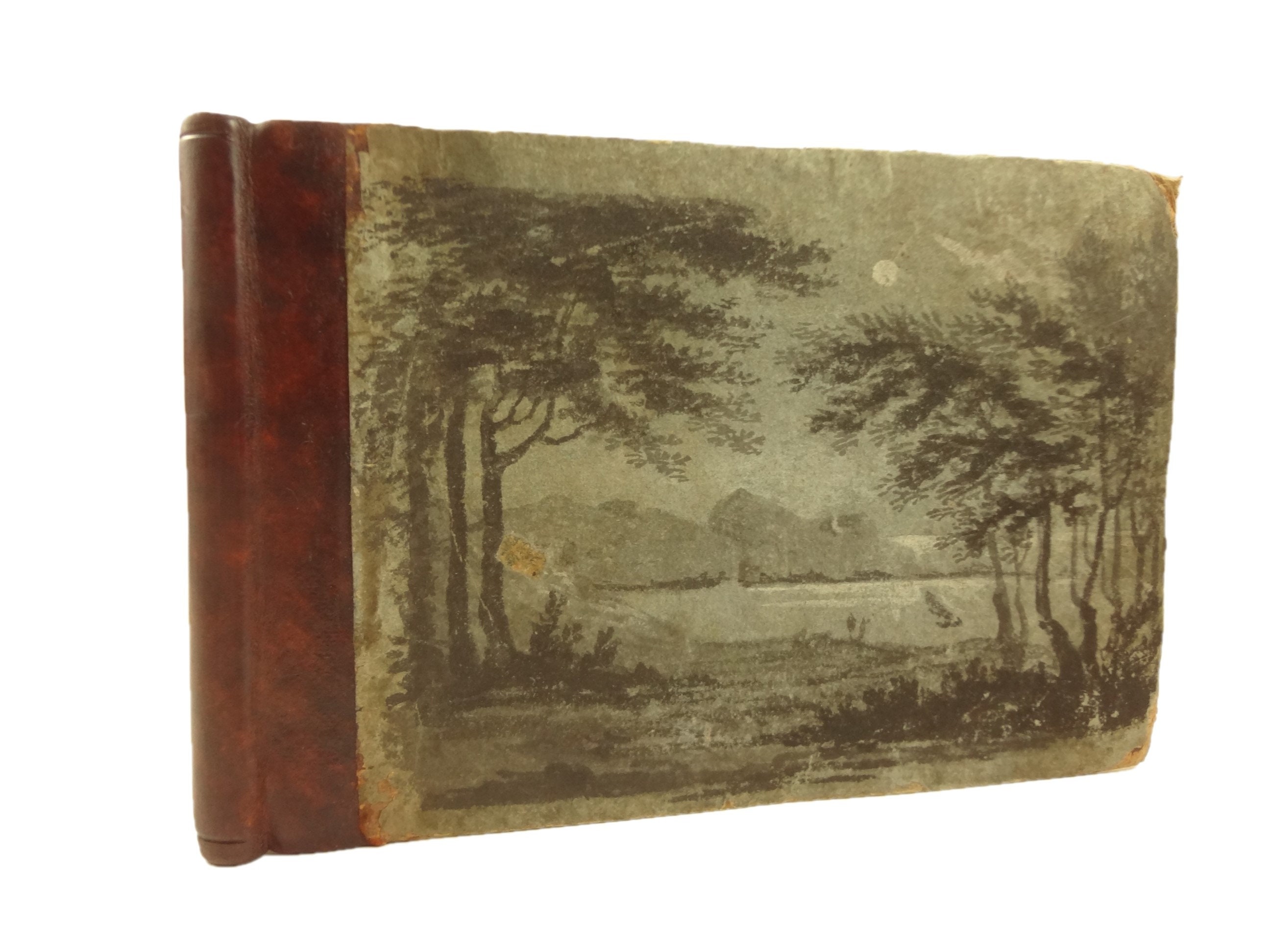 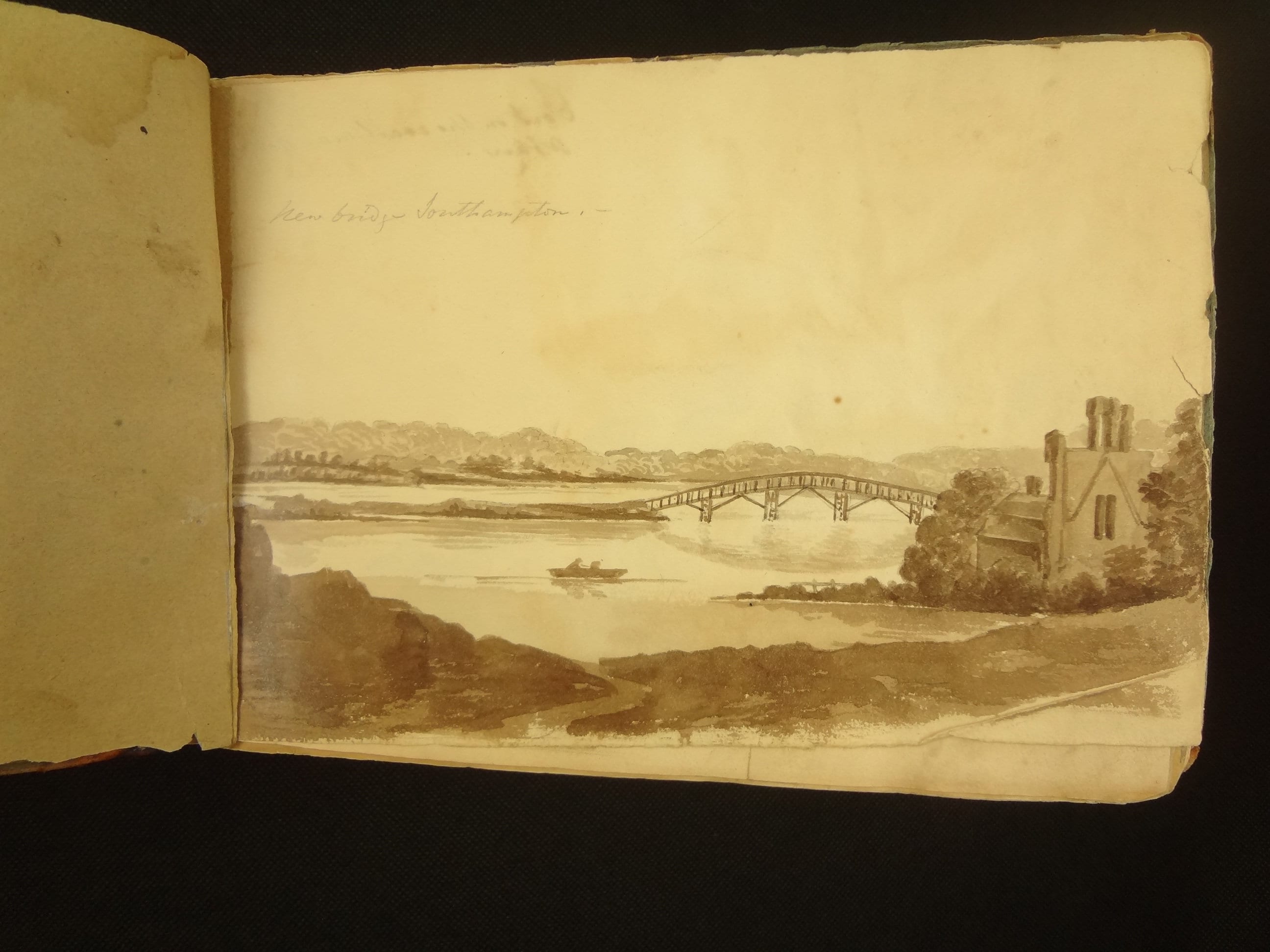 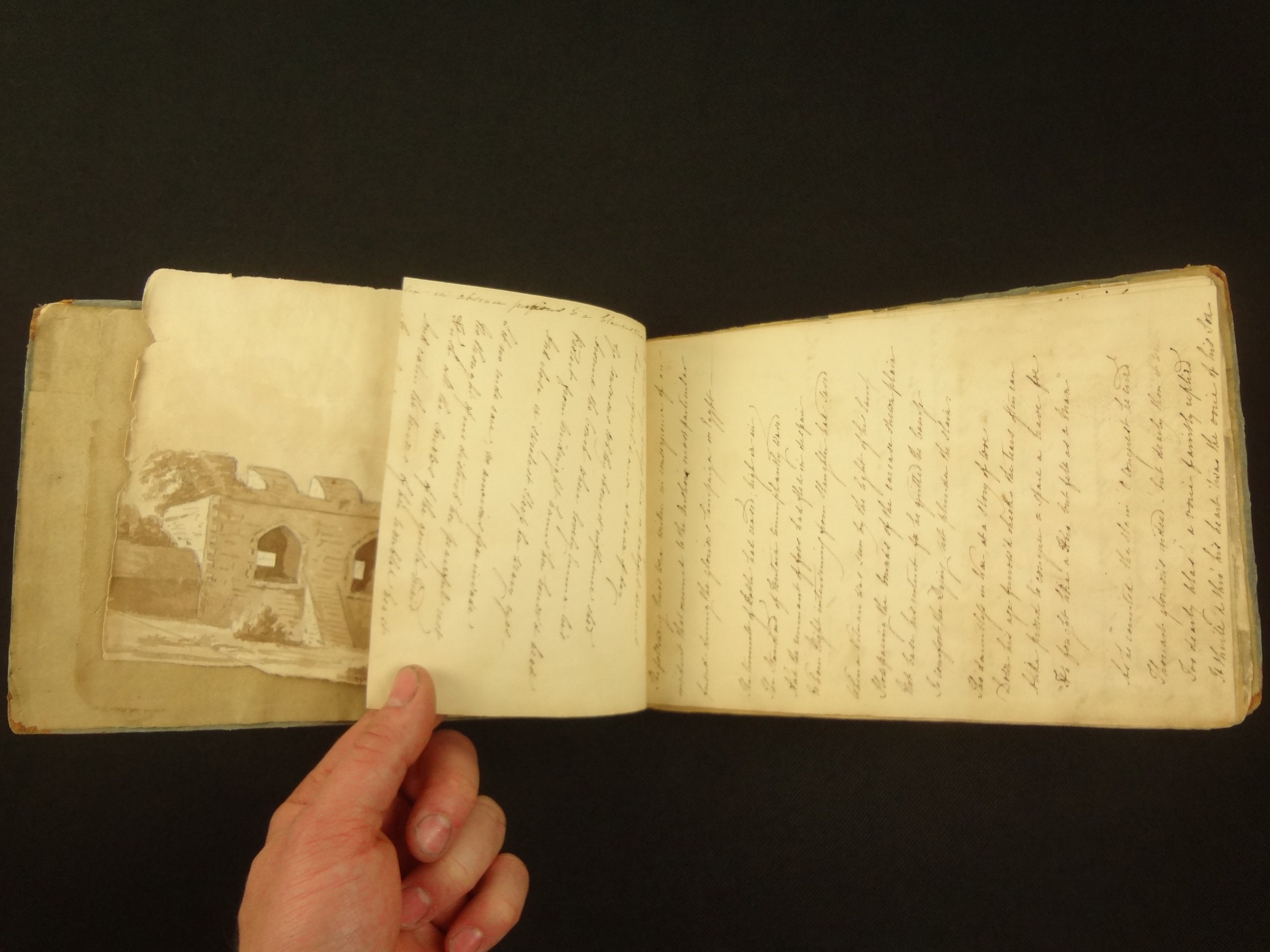 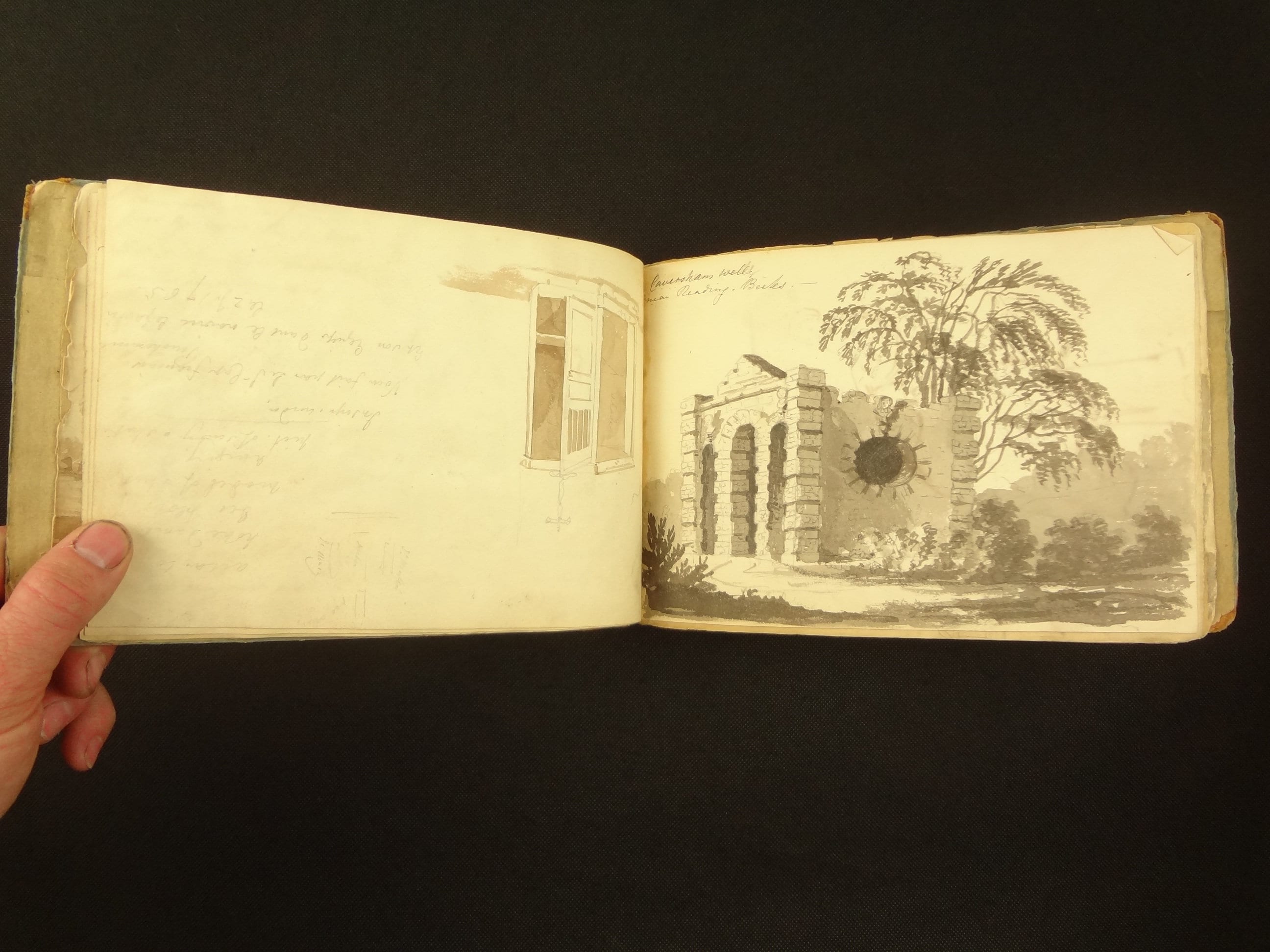 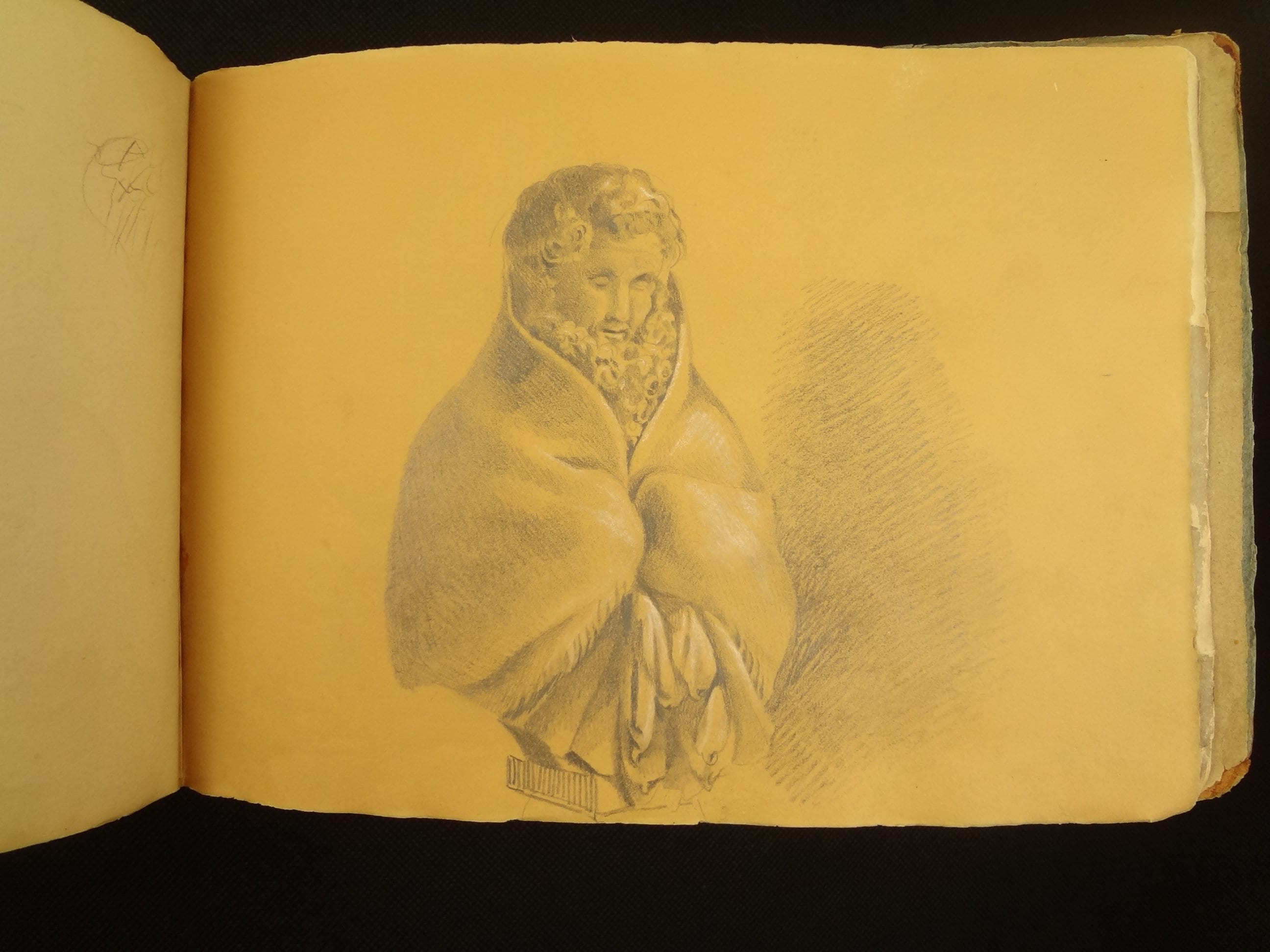 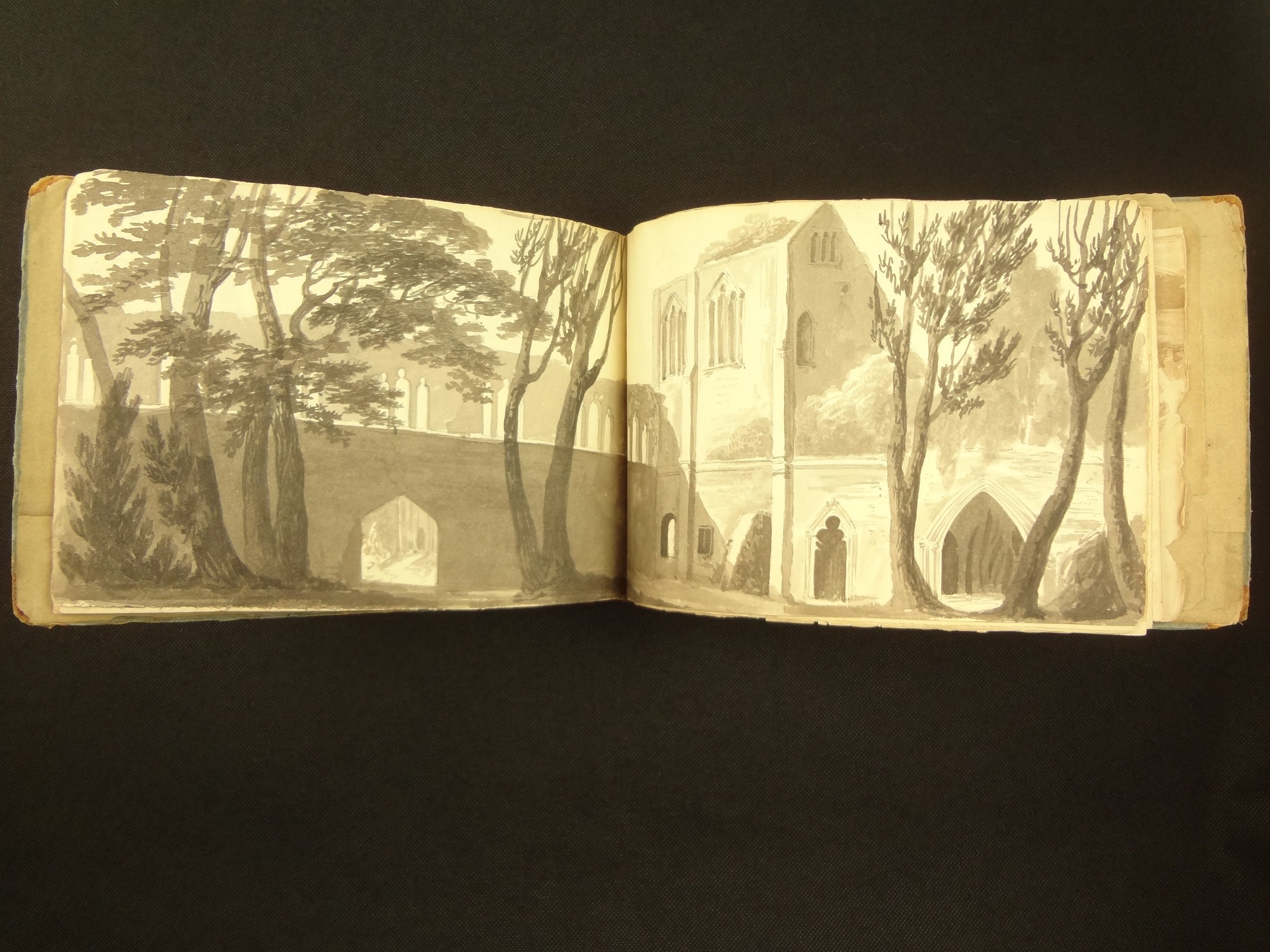 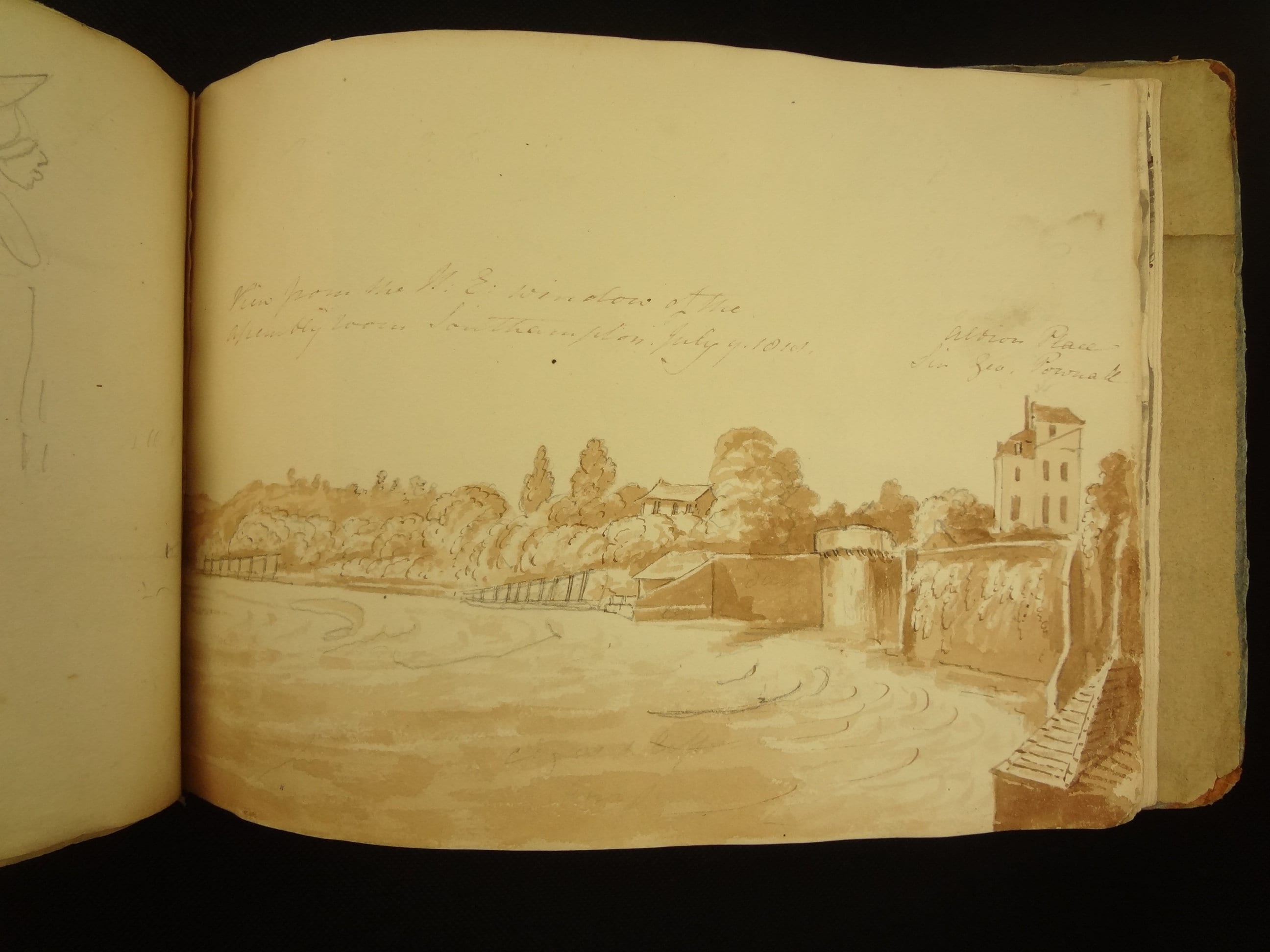 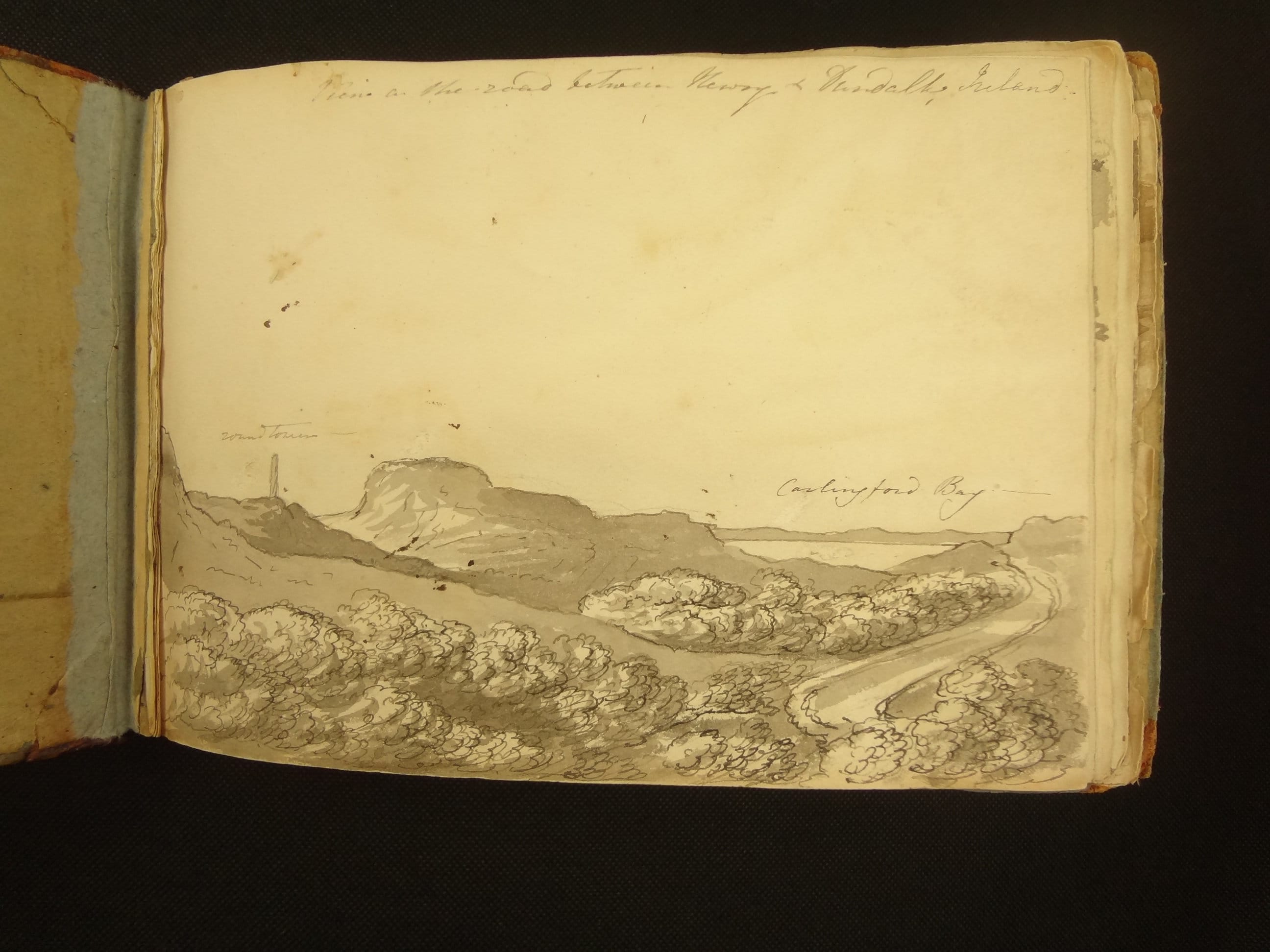 A handsome artist's sketch book, mainly with ink washes from the Southampton area (including many of Netley Abbey) but also with an original manuscript of a poem that found its way to publication later in the 19th century, The Dying Soldier (author anonymous), with some explanation of the poem's origins.

Original manuscript of a poem that would later, in print, be called The Dying Soldier; with an explanation, "The following lines were written in consequence of an incident that occurred to the author's most particular friend during the glorious campaign in Egypt." G. (possibly Pownall) signed his name to the end of the poem.

This anonymous poem was printed in:

1864 The Patriotic Speaker, Consisting of Specimens of Modern Eloquence... p. 364

Several other excerpts of poetry including one attributed to Spencer, and one by Dr Henry Harington. Together, with The Dying Soldier, two leaves of poetry.

Leaf with an ink wash of an ancient wall, and a window. No title.

Full-page ink wash of a church.

Two-page ink wash of Netley Abbey (verso of one page, recto of following); upside down in the book.

Full-page ink wash of the water and walls of Southampton dated July 181(?); this plate has "Albion Place, Sir Geo. Pownall"

Another wash of church ruin, 1/2 page.

Pencil sketch of a woman addressing a courier riding away on a horse.

Full-page wash of lean-to, and two people, in front of a church ruin.

Full-page wash of Belfast Loch (upside down in binding)

Full-page wash of Copeland Island (upside down in binding)

Full-page wash of "road between (Newry?) and Dundalk, Ireland", with Carlingford Bay in the background.

Around this same time Jane Austen stayed in Southampton several times. What later became the novel Northanger Abbey is largely thought to have been influenced by Austen's visits to Netley Abbey, while in Southampton; it was originally sold to a Southampton High Street publisher under the title Susan, but she bought it back and changed the title. See "Jane Austen, Netley Abbey, and Gothic Tourism", by Cheryl Butler, for a lengthy and interesting discussion.

I'm disinclined to attribute the work to either. There are a number of notes and numbers within the illustrations, perhaps indicating they were to later be engraved for publishing. I wonder if the book wasn't the work of an artist who provided drawings to be engraved for printing. The Pownall reference might simply be indicating where he was staying in Southampton.

The paper has the watermark "Whatman" with dates, the last leaf has a clear 1801. The Southampton leaf has a date from circa 1810.

This book is a prime example of a traveler's sketch book circa 1800. Ink washes were much in style and museums hold many similar examples from the period (search "ink wash grand tour museum"). Also, the darkened leaf with a black and white graphite drawing of a bust is similar to a style popular in Europe at the time.

Please review the pictures. Nicely re-spined. Boards with edge and corner wear. Flyleaf (extension of the pastedown) repaired at gutter, but still some gutter cracking; also with a (tea?) mark. Sir George Pownall info written on the pastedown, and a sketch of feet lightly visible on flyleaf. Papers throughout with some toning, page edge chipping, etc. as befits a sketch book used in the field. Notes and annotations throughout. Some evidence of removed leaves at gutter (stubs). Also, several leaves seemed to have been cut with a wider stub. Many of the illustrations with guide words/numbers, presumably for later publication/engraving. Evidence of removal of leaves at rear. No rear flyleaf.