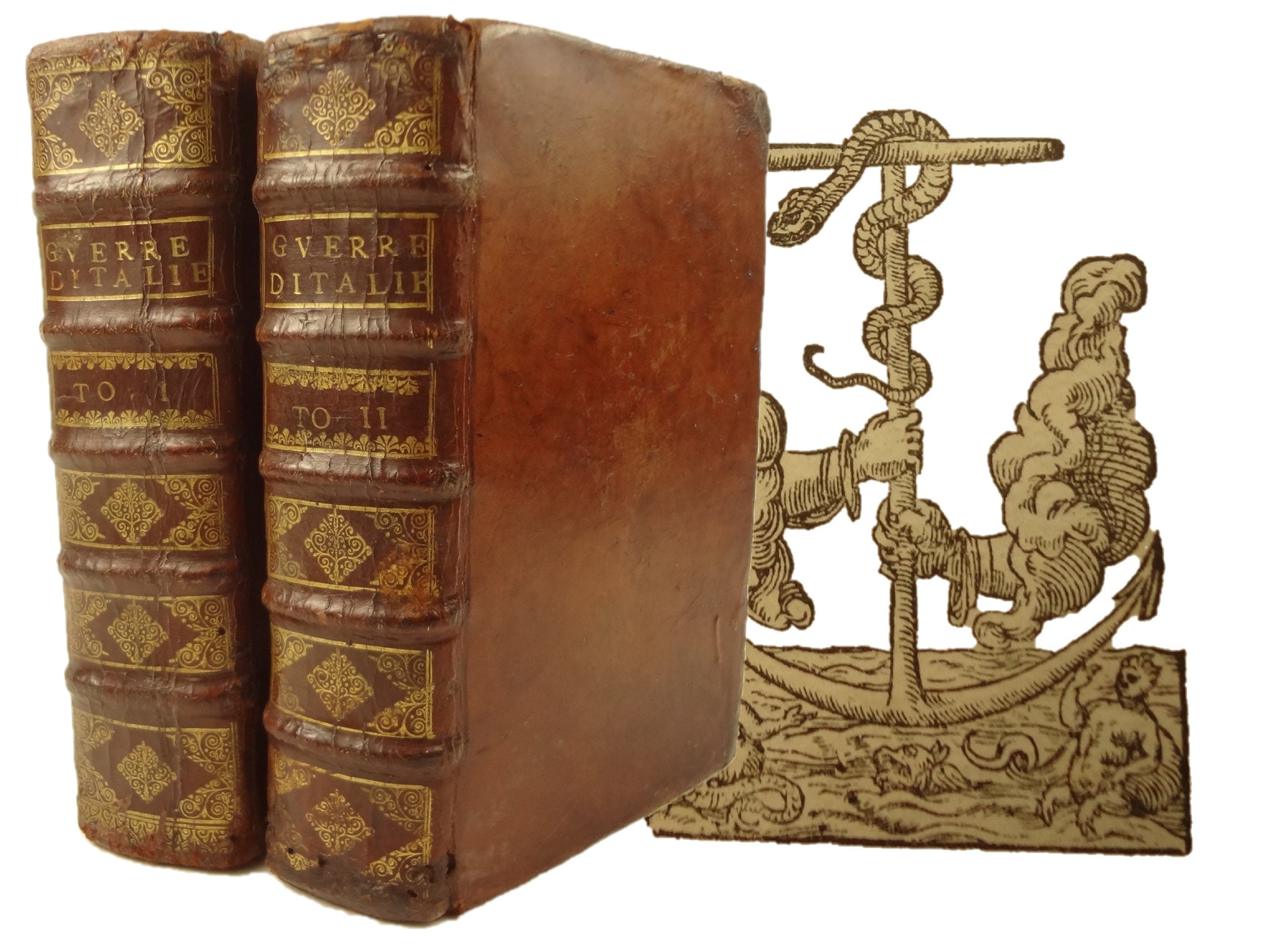 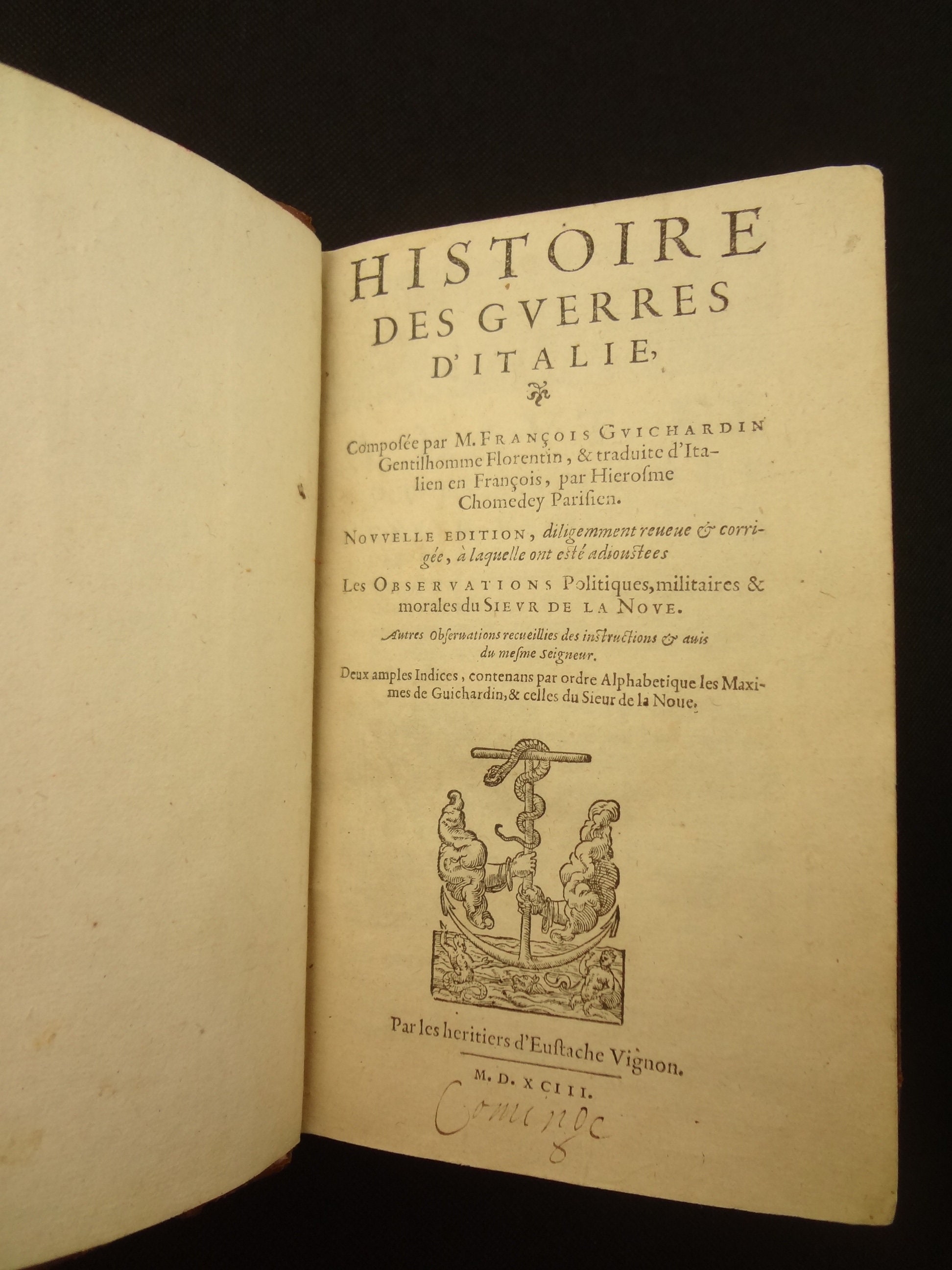 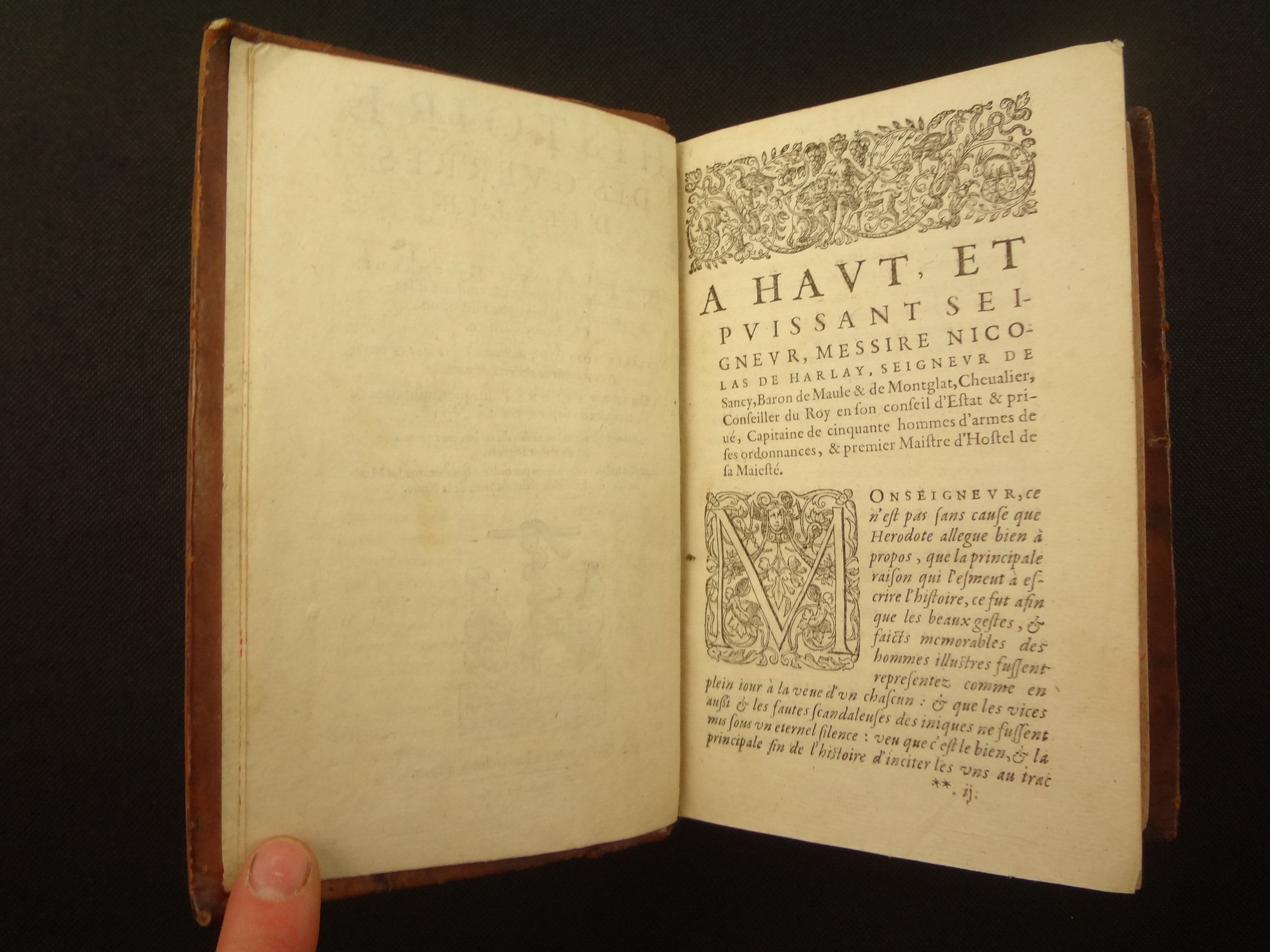 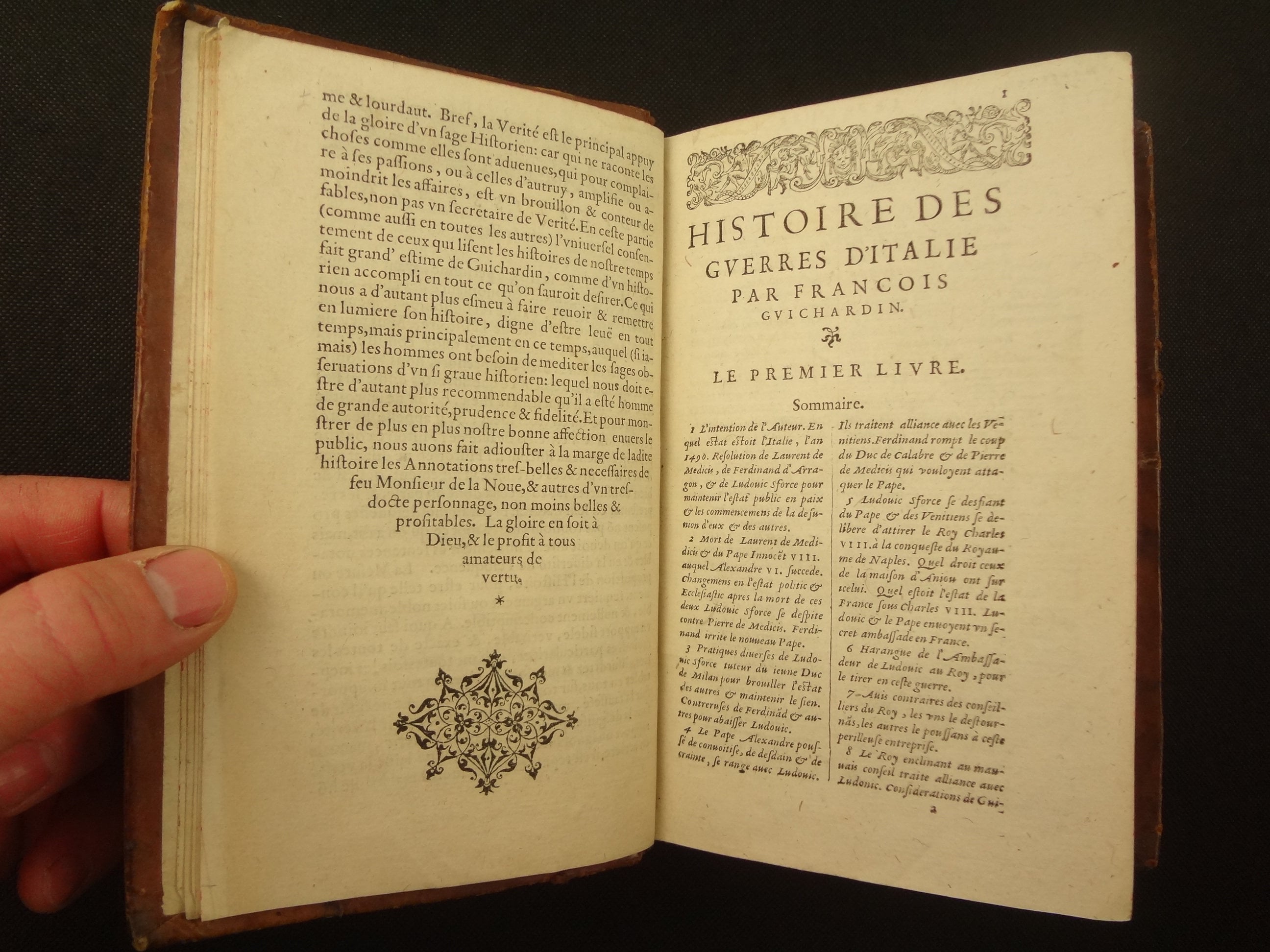 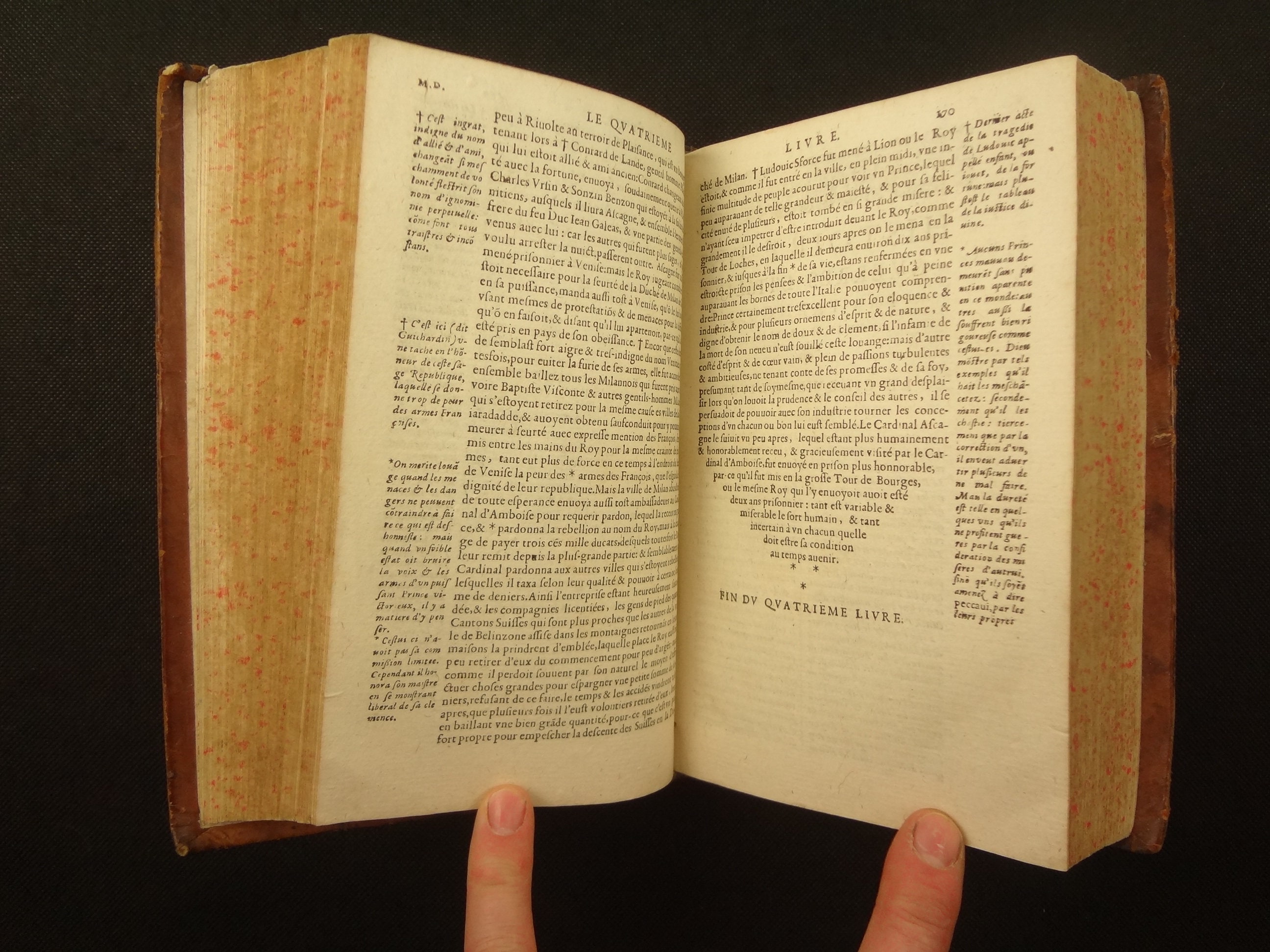 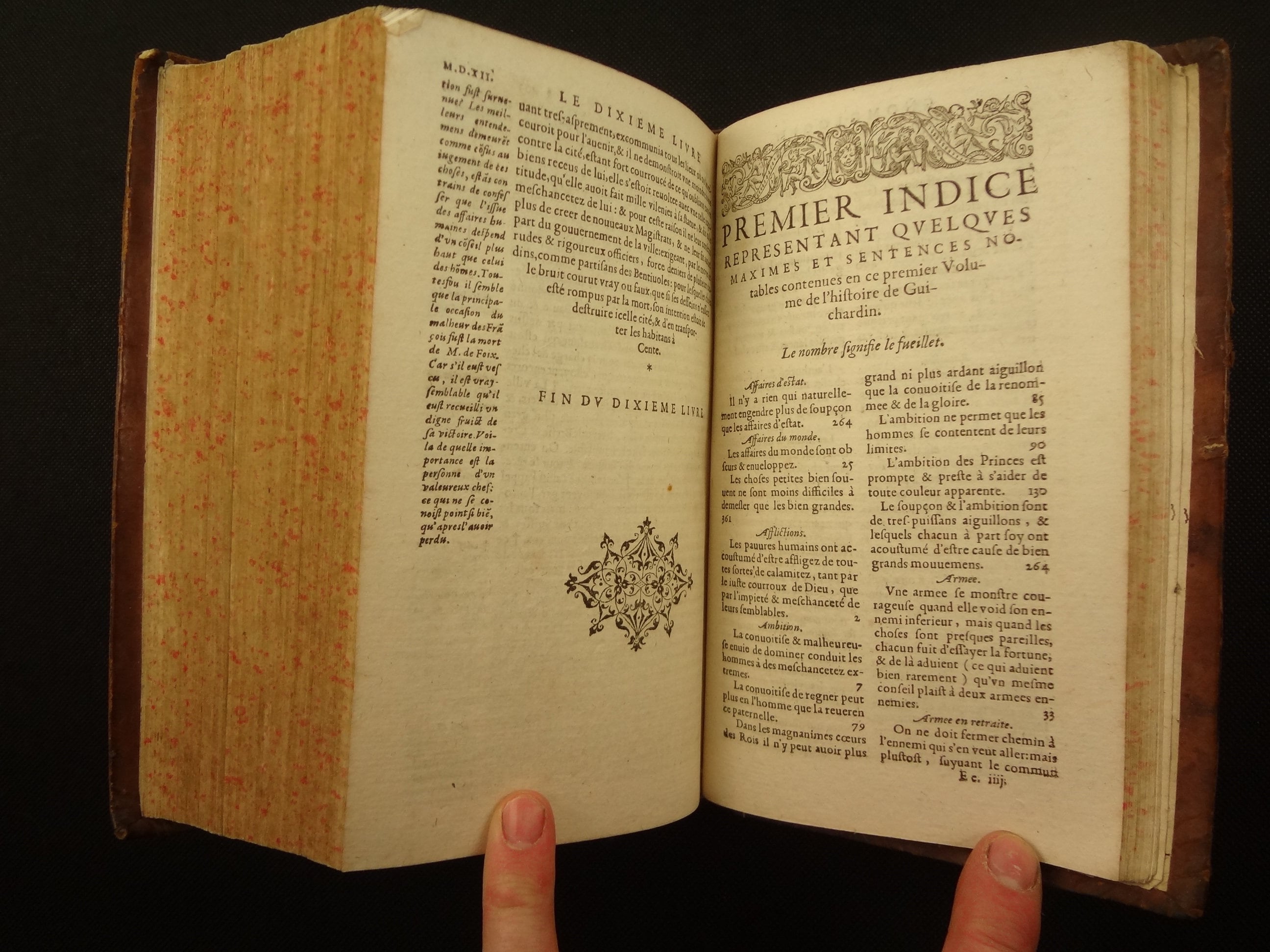 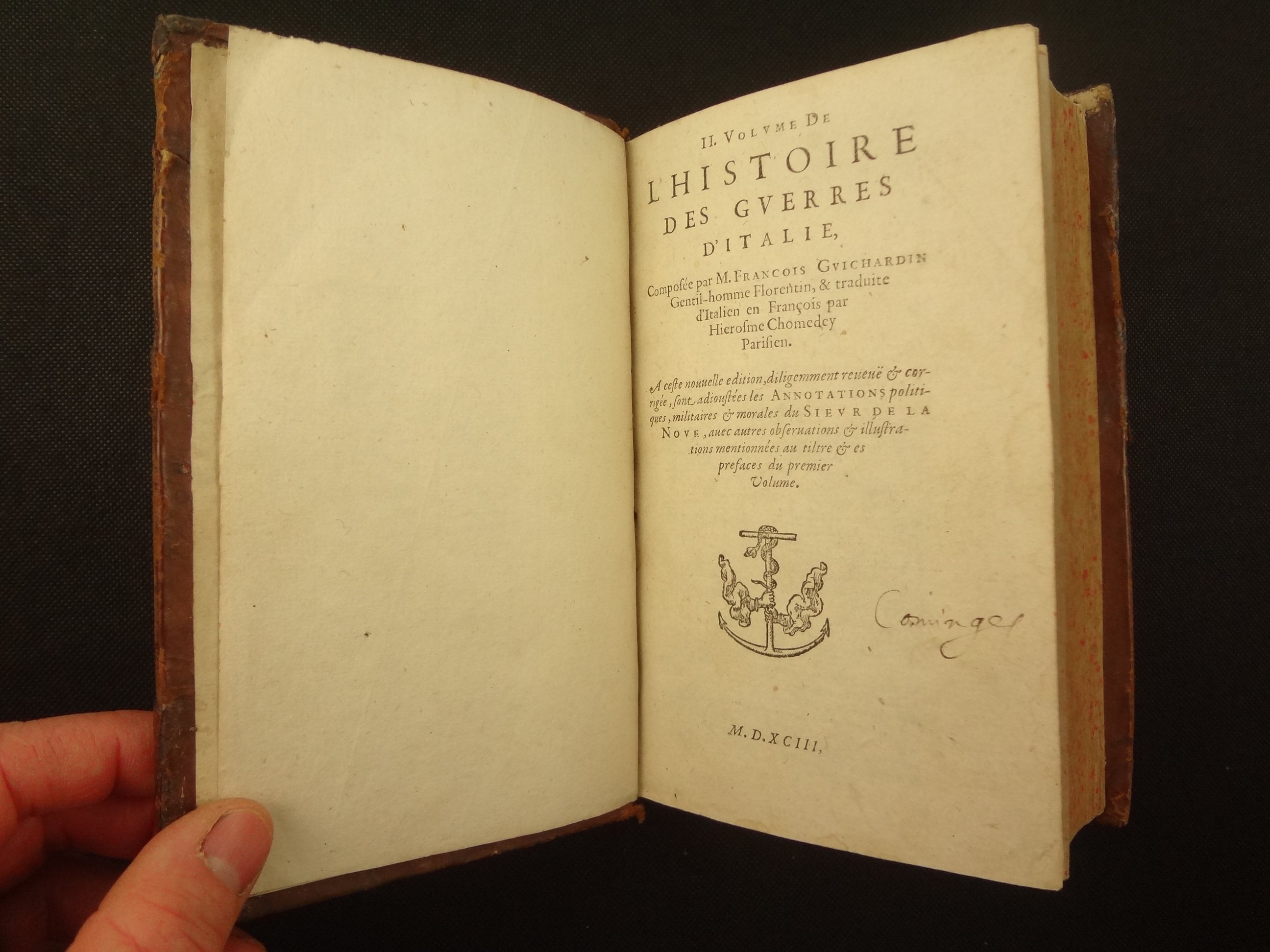 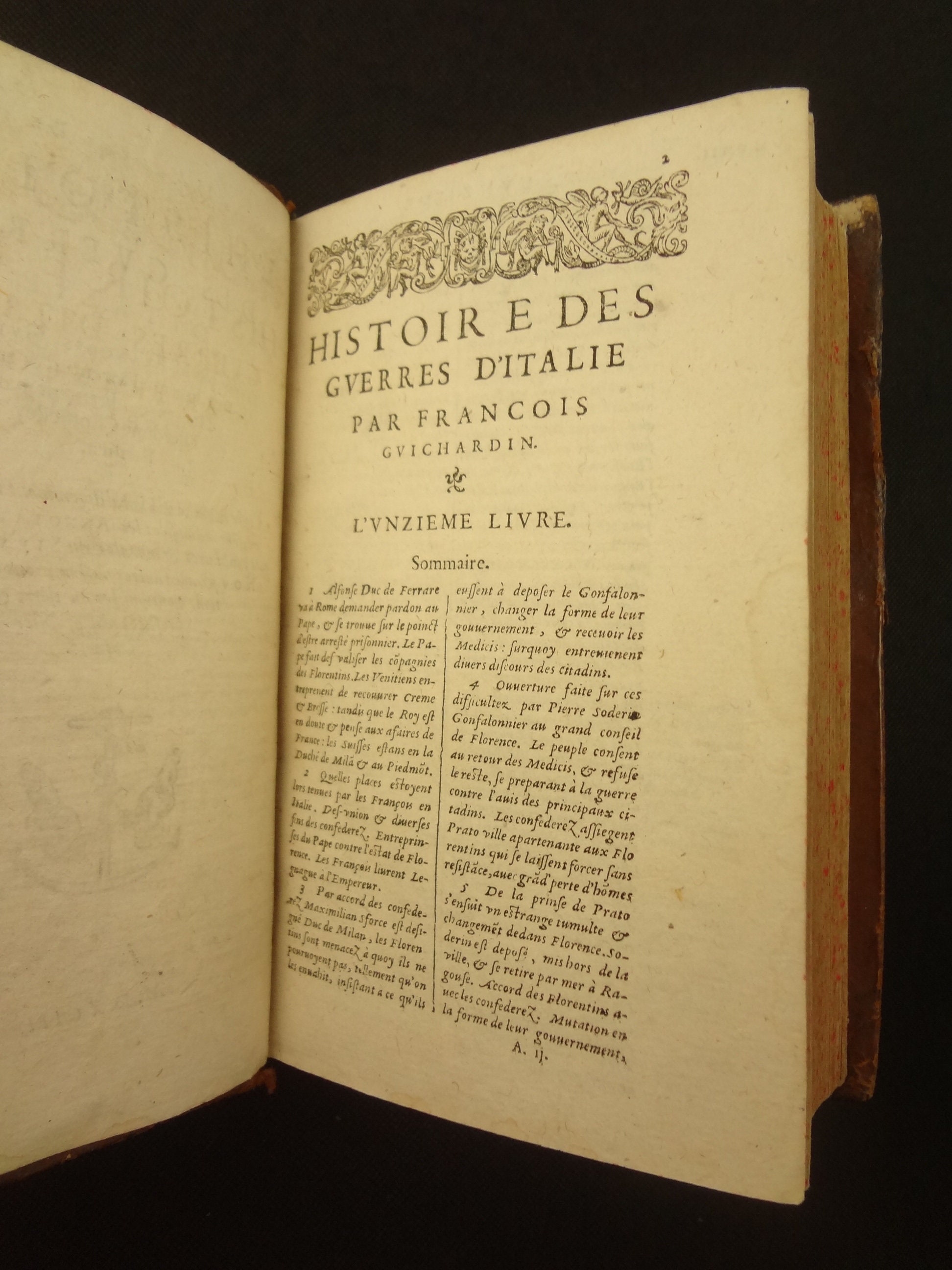 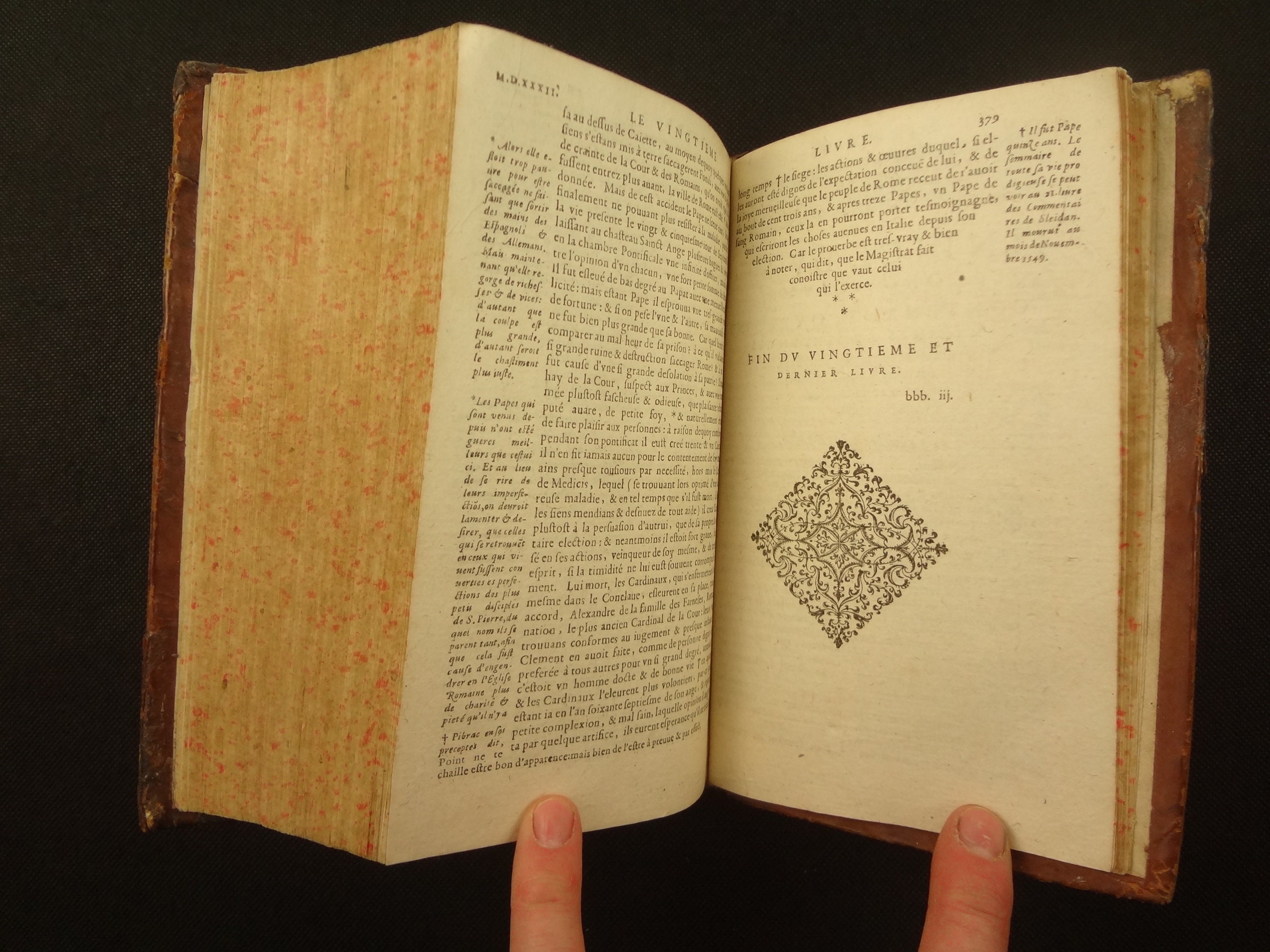 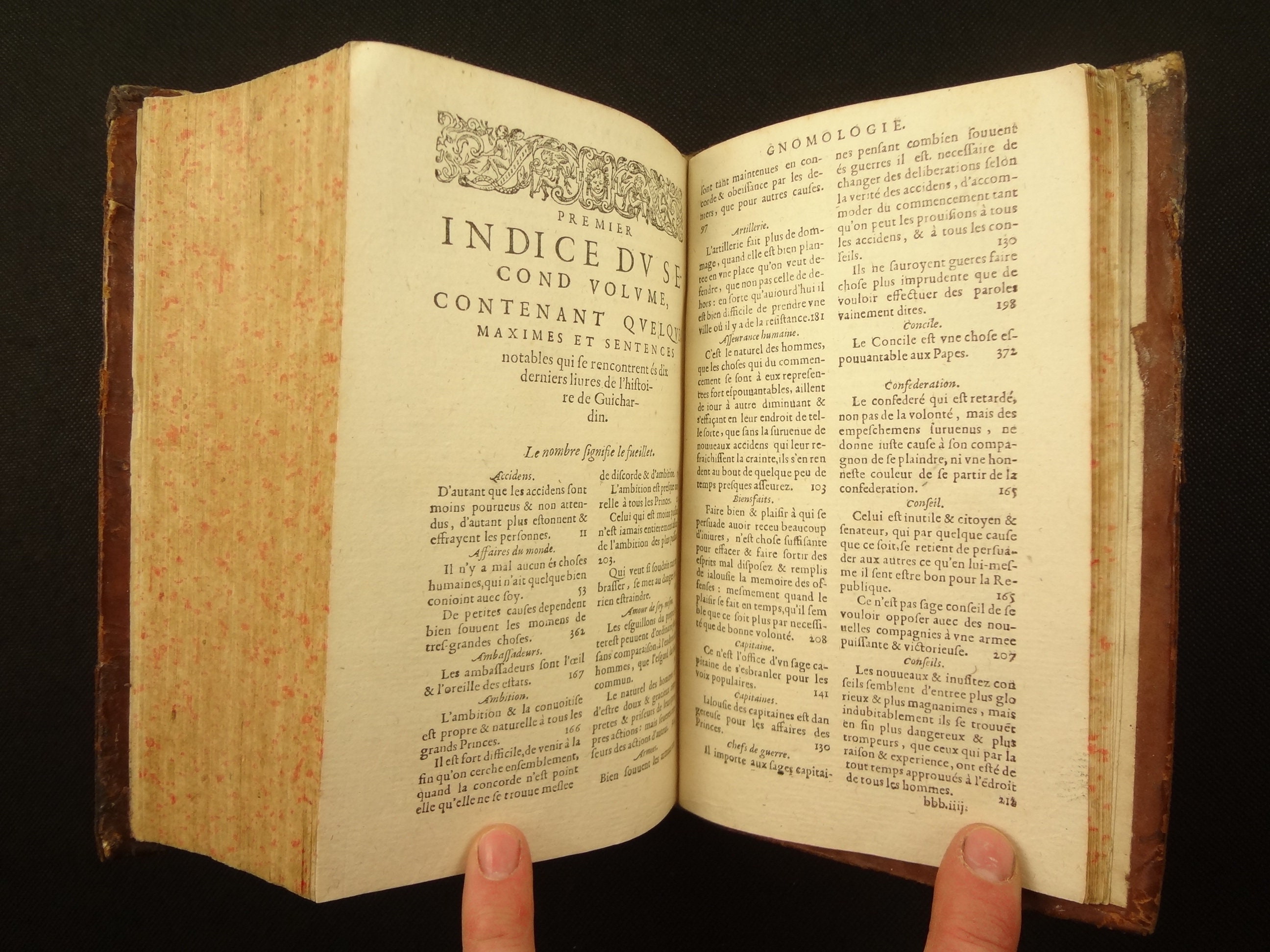 The first octavo French (truncated) edition of Francesco Guicciardini's celebrated history of Italy, this edition specifically drawing out the war writings from the 20-volume Italian original; this edition also with the added observations of Francois de la Noue (Bras-de-Fer), drawn from his "Observations sur l'histoire de Guicciardini". The French translation of Guicciardini was executed by Jerome Chomedey, first printed in quarto in 1568.

Francesco Guicciardini (1483 –1540) was an Italian historian and statesman. A friend and critic of Niccolo Machiavelli, he is considered one of the major political writers of the Italian Renaissance. In his masterpiece, The History of Italy, Guicciardini paved the way for a new style in historiography with his use of government sources to support arguments and the realistic analysis of the people and events of his time.

Guicciardini's Storia d'Italia (History of Italy), provides a detailed account of politics in the Italian Peninsula between 1490 and 1534. Written during the last years of his life, this work contains the historian's observations collected over his entire lifetime and was a work intended for posterity. As Gilbert writes: "The History of Italy stands apart from all his writings because it was the one work which he wrote not for himself, but for the public."

In his research, Guicciardini drew upon material that he gathered from government records as well as from his own extensive experience in politics. His many personal encounters with powerful Italian rulers serves to explain his perspective as a historian: “Francesco Guicciardini might be called a psychological historian—for him the motive power of the huge clockwork of events may be traced down the mainspring of individual behavior. Not any individual, be it noted, but those in positions of command: emperors, princes and popes who may be counted on to act always in terms of their self-interest—the famous Guicciardinian particolare.”

Francois de la Noue (1531 – 1591), called Bras-de-Fer (Iron Arm), was one of the Huguenot captains of the 16th century. At the siege of Fontenay (1570) his left arm was shattered by a bullet and later amputated; but a mechanic of La Rochelle made him an artificial iron arm (hence his sobriquet) with a hook for holding his reins. It was in captivity that La Noue wrote his celebrated Discours politiques et militaires, a work which was published at Basel in 1587. In 1592 he published "Observations sur l'histoire de Guicciardini".

"Cominges" on the title page of both volumes. Perhaps likely that it is from the French Cominges family (other spelling, Comminges), a royal family that has had responsibility governing the Comminges region.

The edition is not rare, but scarce to the market because of the importance. It is held in many of the world's best libraries. At the time of listing, there are two other copies for sale (using Vialibri), notably one at the Librarie Camille Sourget with a French royal binding for circa $7,000 USD (the other can be dismissed for being incomplete and still asking circa $7,000 USD).

Universal Short Title Catalogue number - 34162, two copies in the U.S., one at Columbia University, the other at the Folger (55 copies in all the libraries).

See pictures. Some edge, corner wear, rubbing to boards, etc.. Spines with rubbing at top and bottom, crazing and several worm holes. Signs of an older restoration, but still with wear to bindings. Both title pages with "Cominges" written on them. Some light toning, occasional fox spot, dog-eared page, throughout volumes. Mark at bottom of v1 p7. Two holes, about 2 cm, on pages 84-88 volume 1; I'm unsure what caused this. Ink mark on rear pastedown of v1. Mostly fairly clean, with wide margins and no annotations save for the name on the title pages.