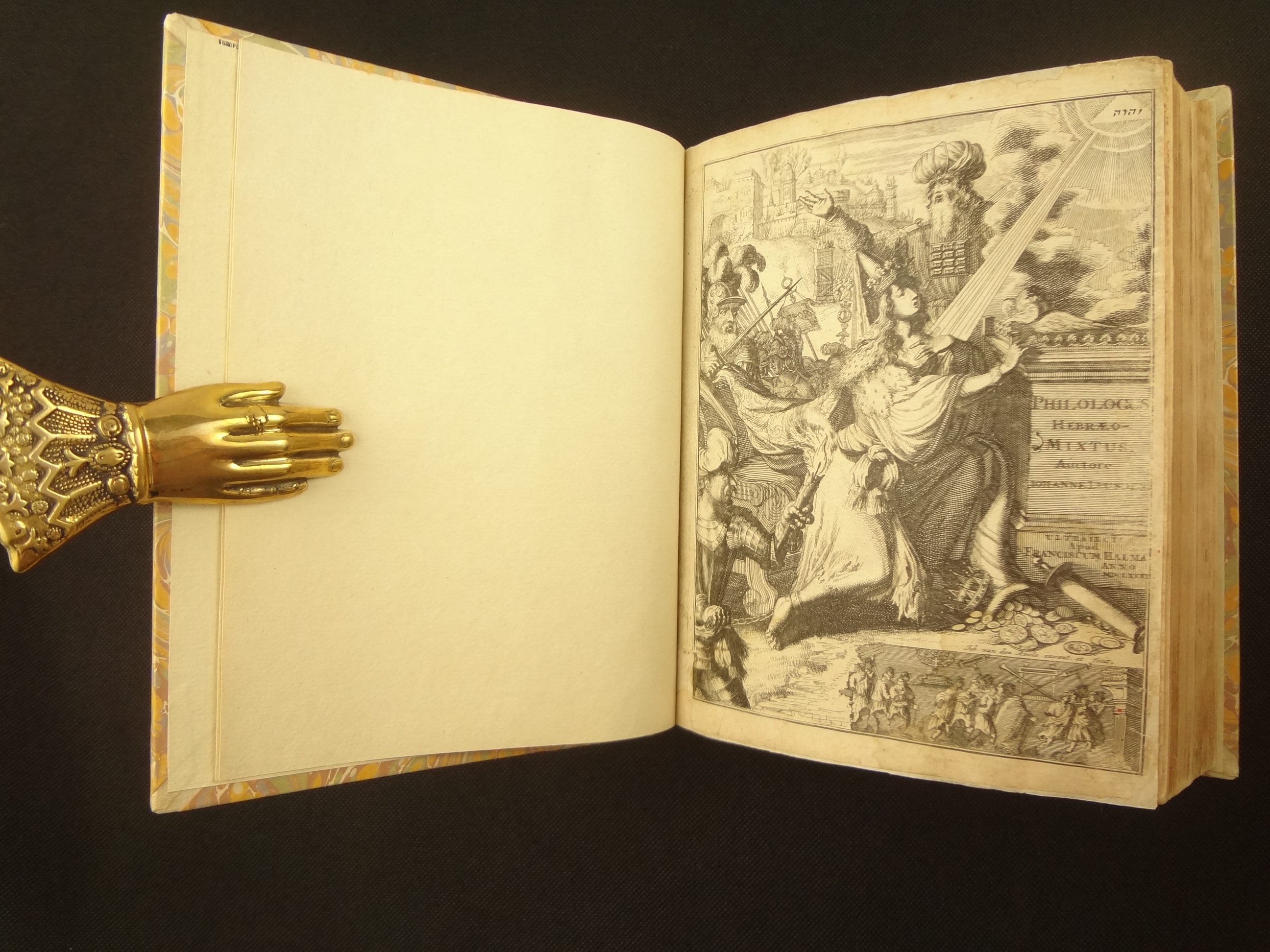 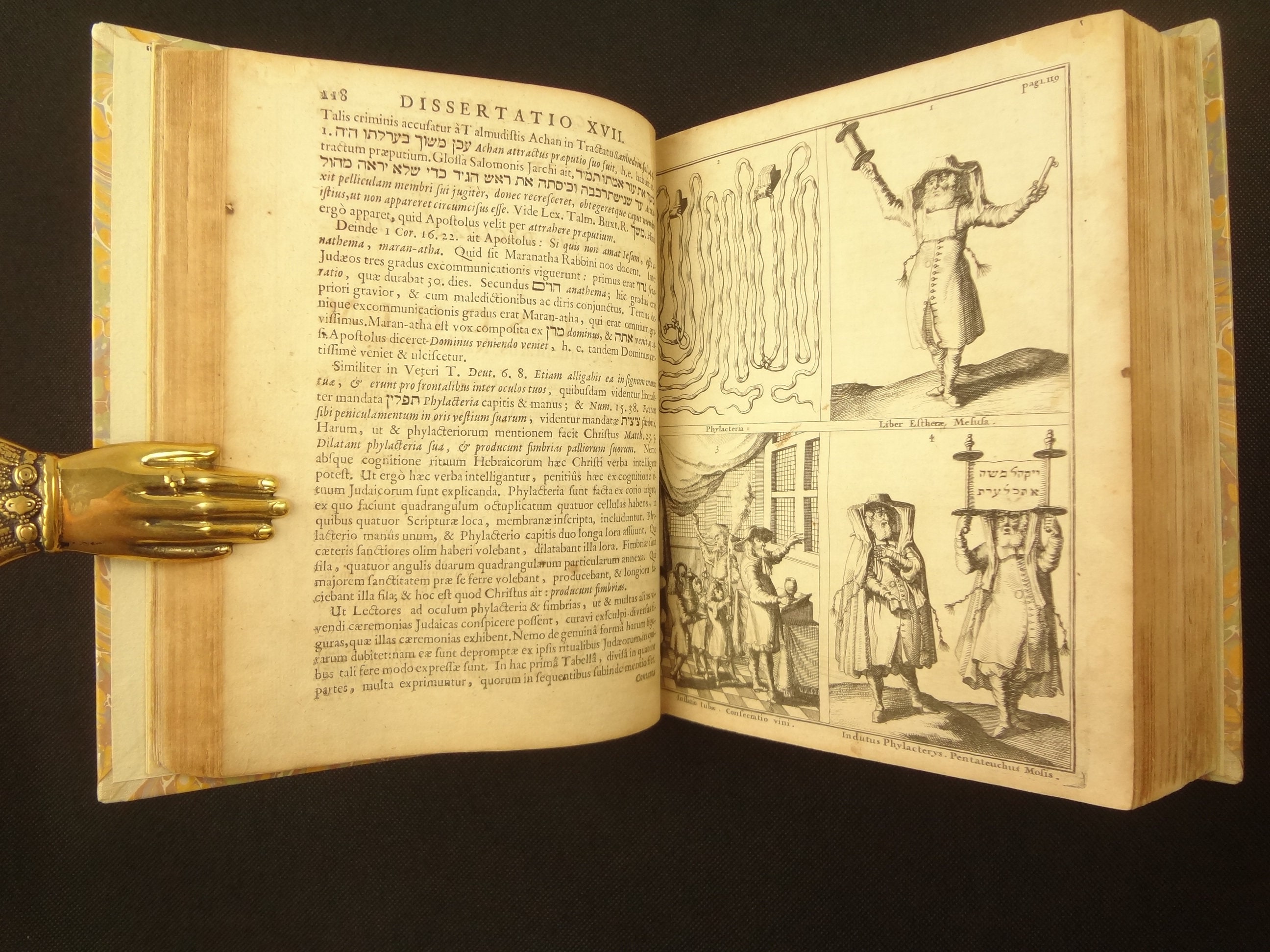 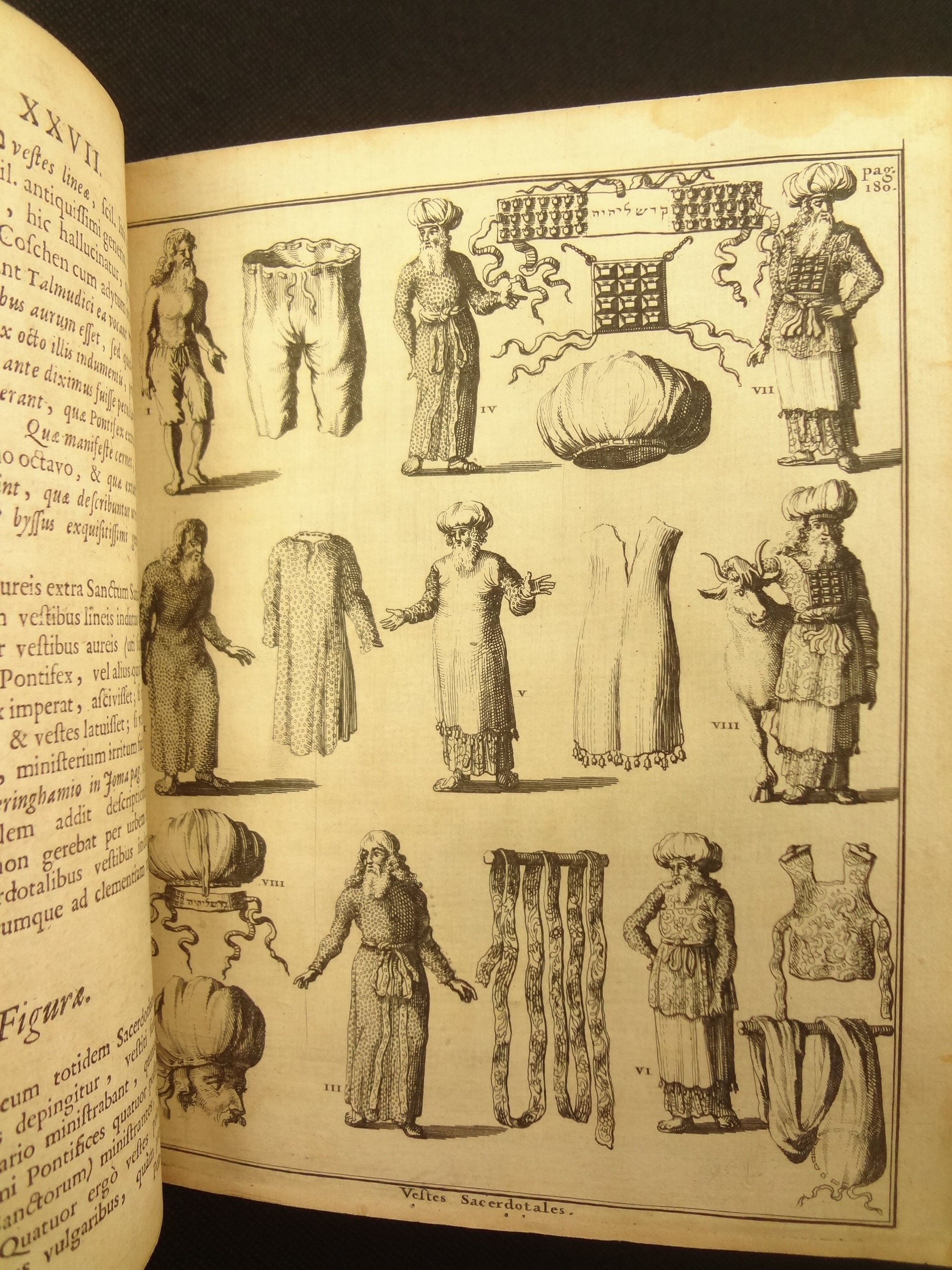 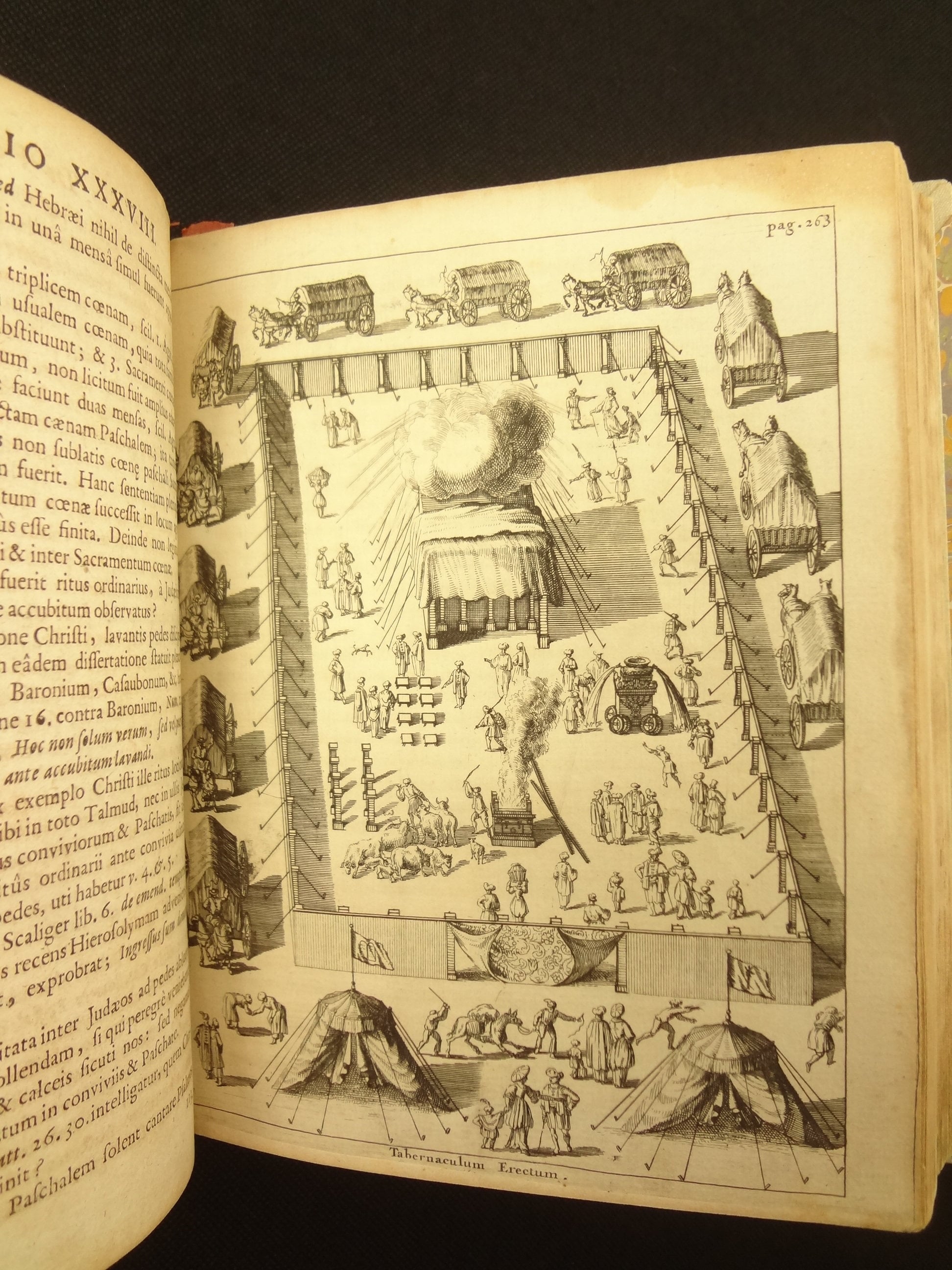 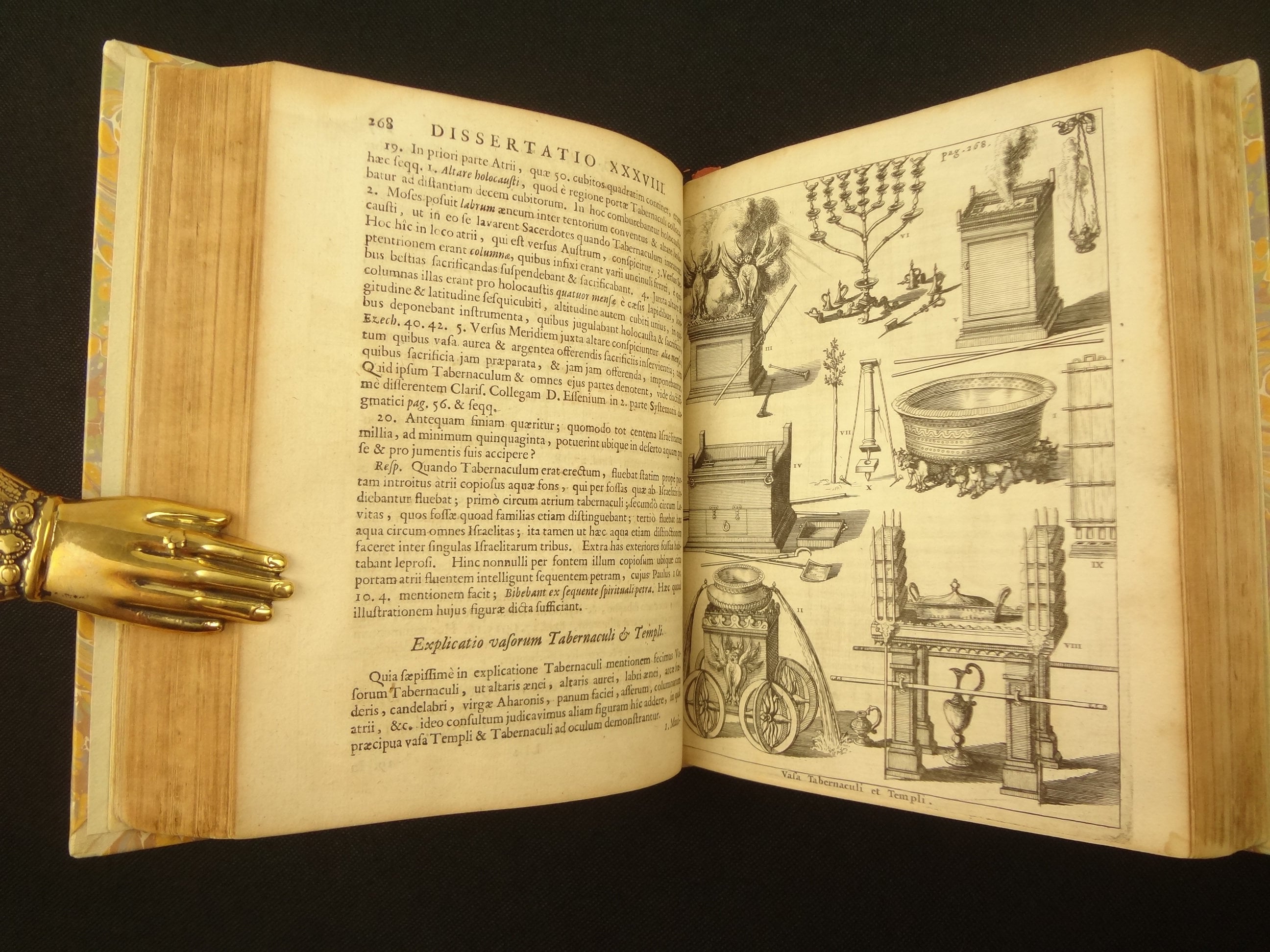 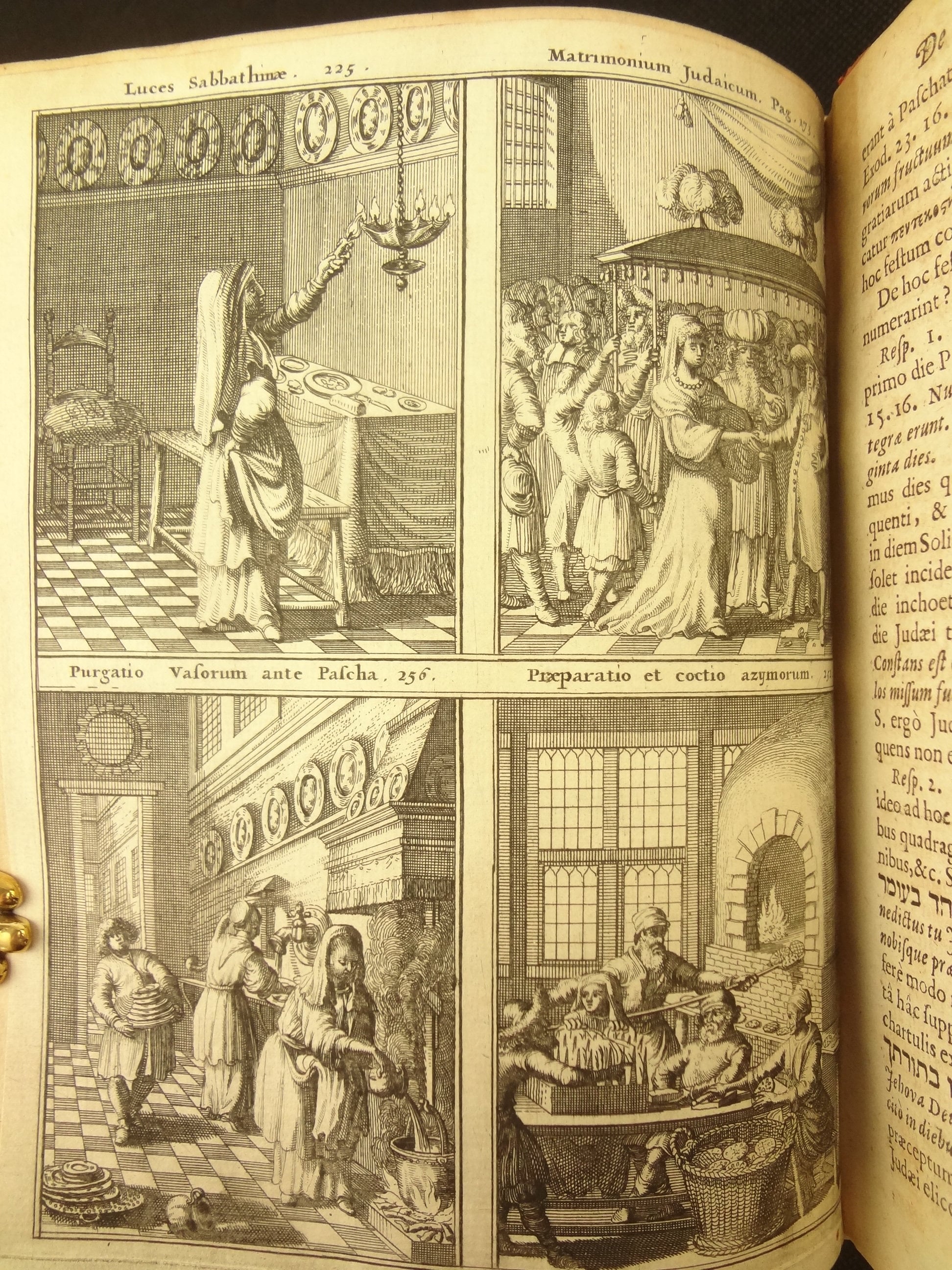 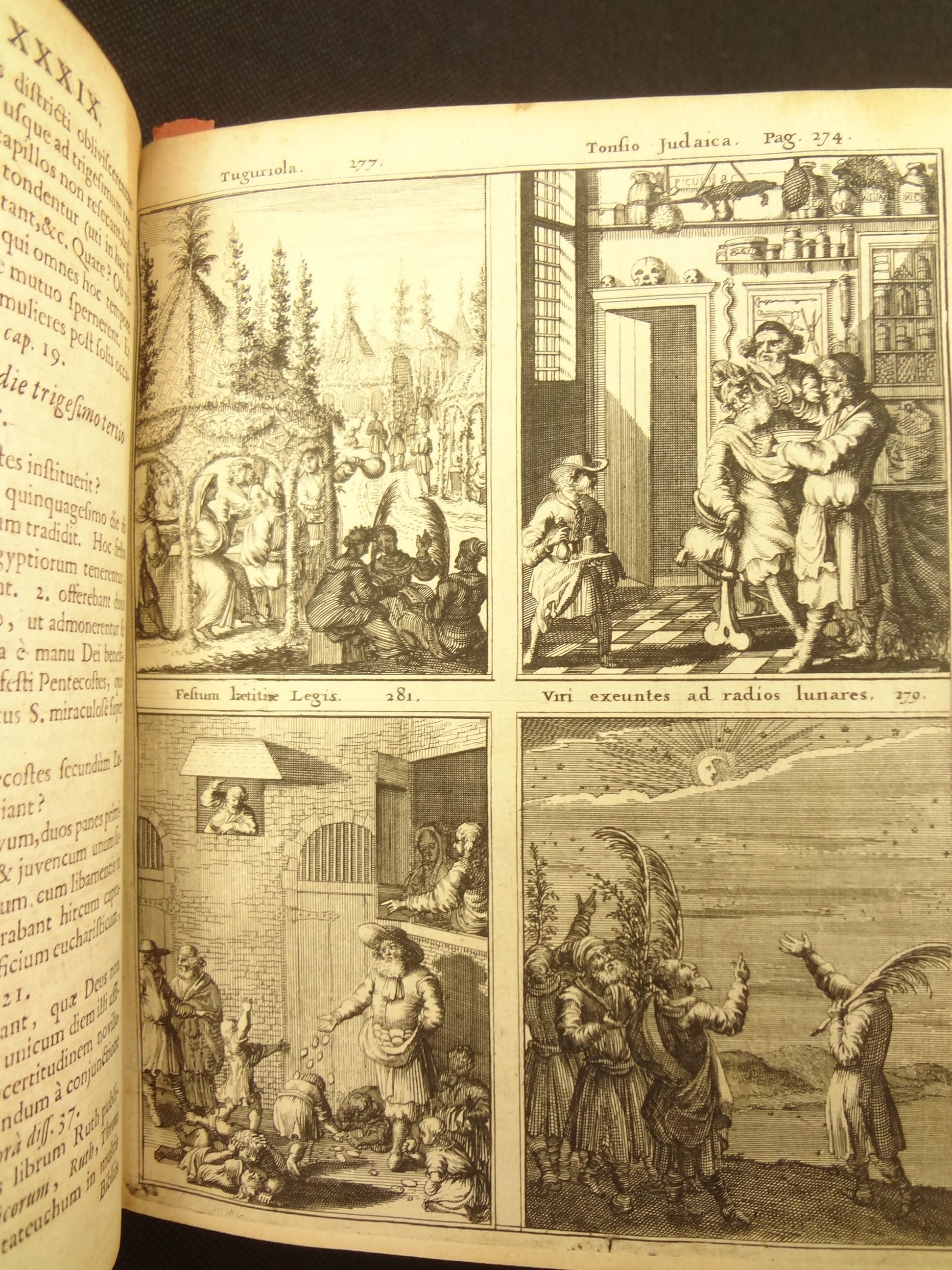 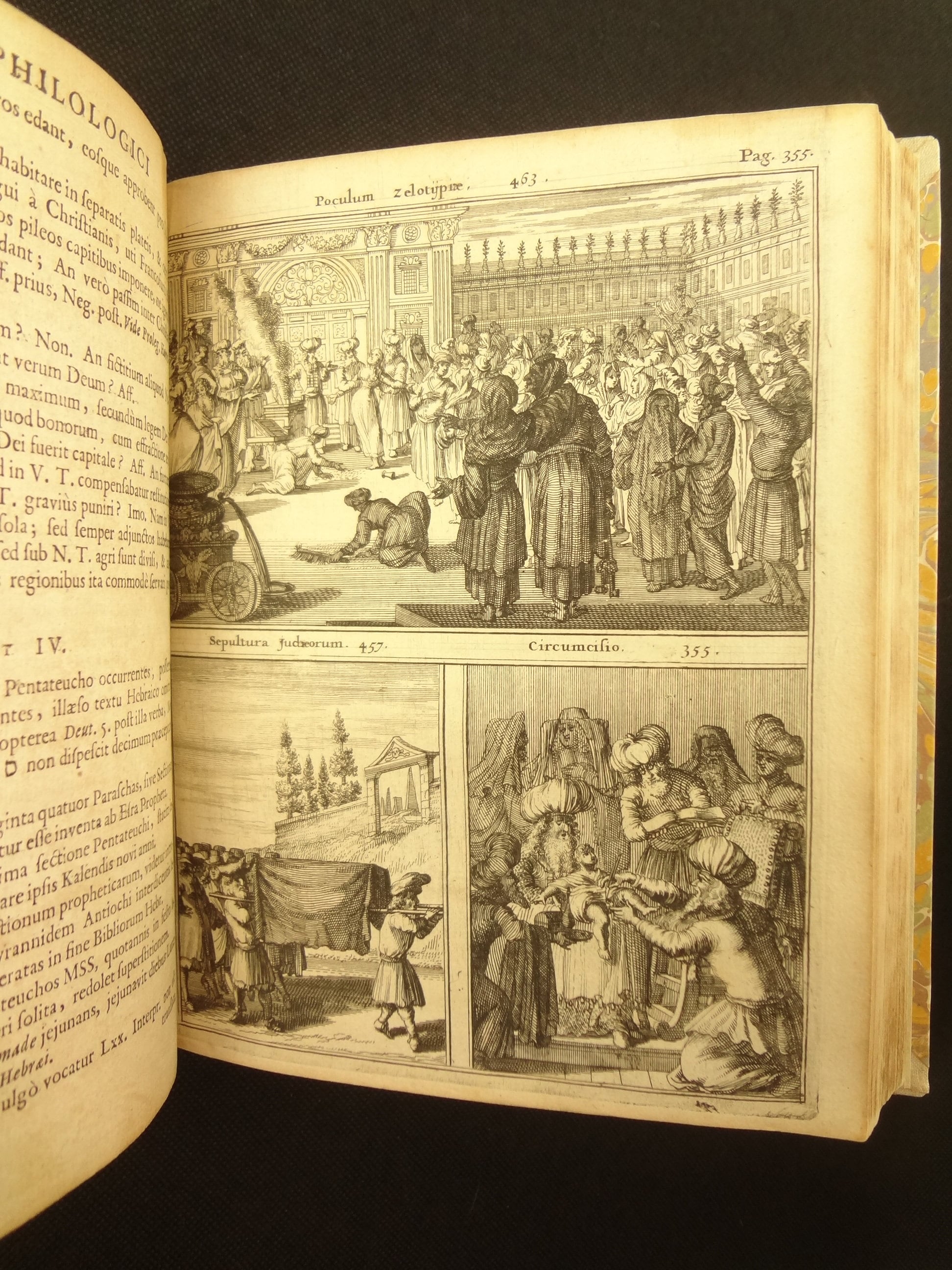 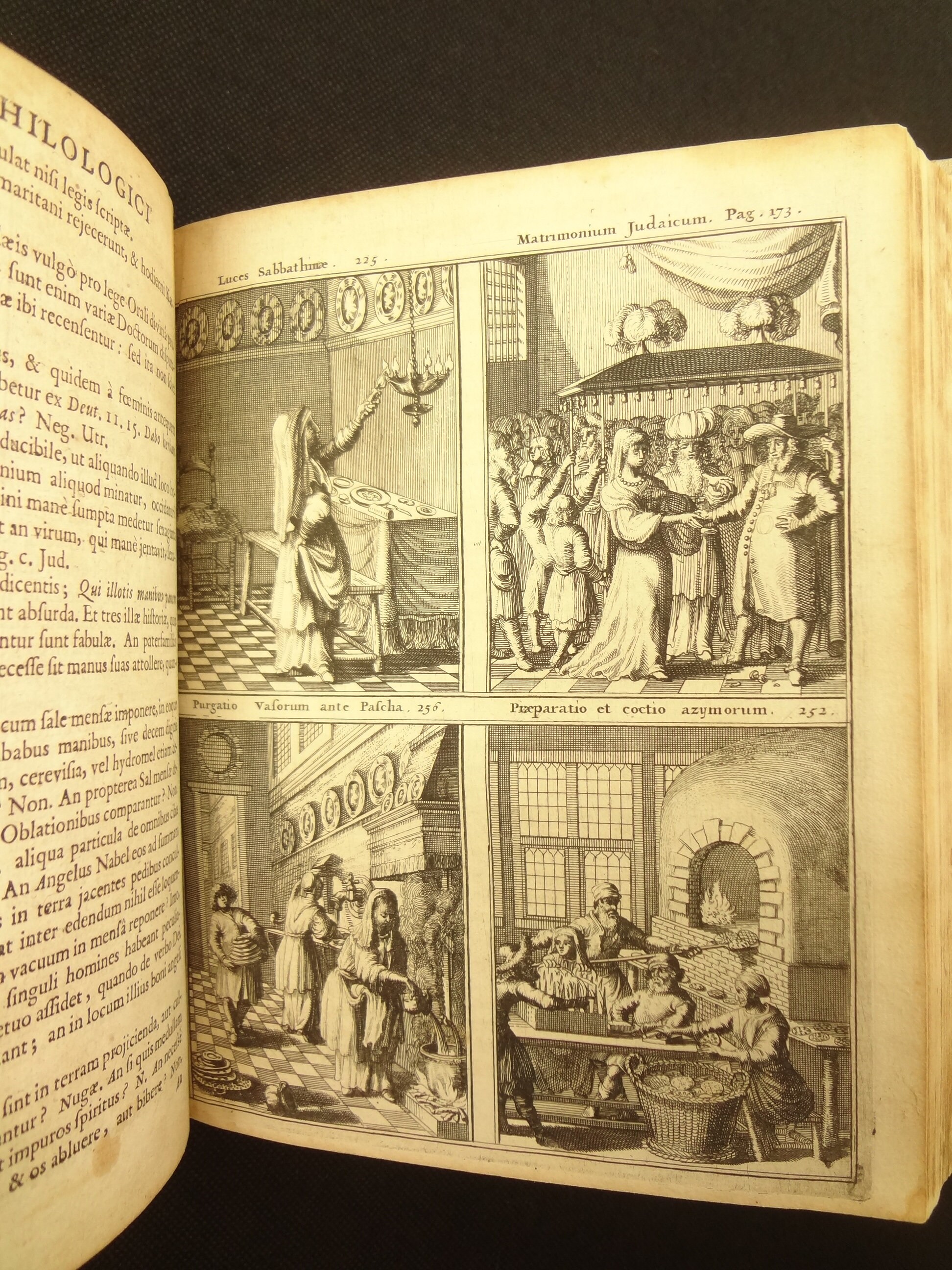 Three 17th century works of Johann Leusden, professor of Hebrew in Utrecht, bound together as one in an attractive binding. Illustrated, with scenes depicting Jewish life.

An example of the importance of words, Leusden expanded on the Hebrew day, basing his ideas on the Sabath beginning and ending at sundown:

"The dissertation discusses the basic difference in the division of hours or prayer times between the Jewish day, reckoned from dusk to dusk, and the Christian day reckoned from dawn to dawn. This difference, it argues, would explain a discrepancy in the account of the hour of Jesus's crucifixion as related by Mark (15:25) and John (19:14)." - Johannes Leusden, University of Pittsburgh bibliography posted online

LEUSDEN (Johannes), was born in Utrecht on April 26, 1624, and after Lyraeus under Lyraeus he studied ancient literature and then under Berkringerus he studied philosophy, and in 1647 he became a master of the liberal arts. In particular, however, he practiced Eastern literature, and attended the lessons of Christiaan Rau, who taught it in Utrecht from January 22, 1644 to April 8, 1645. After having heard the lessons of Voet, Schotanus, de Maats and Hoornbeek about theology, he became a proponent in 1649 and went to Amsterdam. to practice further in Hebrew through association with Israelites.

Returning to Utrecht and being authorized to teach Eastern, he went once more to Amsterdam, to be instructed by the Jews themselves in the Talmud and the writings of the Rabbis. In July 1650 he was appointed extraordinary professor in Oriental at the university of applied sciences in Utrecht, and then in January 1653, those van Sluis coveted him as a preacher, was appointed full professor. Van Leusden held this position with great fame for a number of years. His name attracted many foreign students to Utrecht. He made himself most creditable, both in the sacred study of language and in the interpretation of the O. and N. Covenant, but could not escape the charge that he attached too much importance to the judgment of Israelis. His teaching was distinguished by comprehension and clarity.

Worldcat OCLC 4950288, not rare, found in many of world's best libraries. Second edition (per the title page).

The second book is paginated and signed afresh, but they are commonly found bound together.

Measures approx. 20 x 15.5 x 5 cm. Vellum spine, edges ruled in gilt, with marbled paper covering the boards. Gilt fillets forming five spine compartments, one with the title on light green morocco (in gilt) and the author's last name in gilt in another compartment. Year at base of spine in gilt. Illustrated. Three "books" bounds together.

Full-page frontis engraving, 8 leaves of plates in the first book, and one in-line illustration of ancient coins.

Frontis repaired, laid down. Title page with some staining, a moisture mark, and some ex-libris marks; seems to be a library call number in light graphite at the top corner, and a name at the bottom-edge. The moisture mark is worst at the title page; mostly it's quite light but occasionally you find it darker at the bottom corner/margin. Also, occasional intrusion from the top edge. Some toning throughout, some places darker than others. Occasional fox spot, candle ember spot, dog-ear, edge chip and thumb. Ink spill margin of 46-55. Page 3 of second volume has a tear that's been repaired. Fore-edge margin of last (Chaldee) book has some (ink?) staining from 25-30.

Despite nitpicking notes, a handsome binding holding a nice work within, including some interesting illustrations.