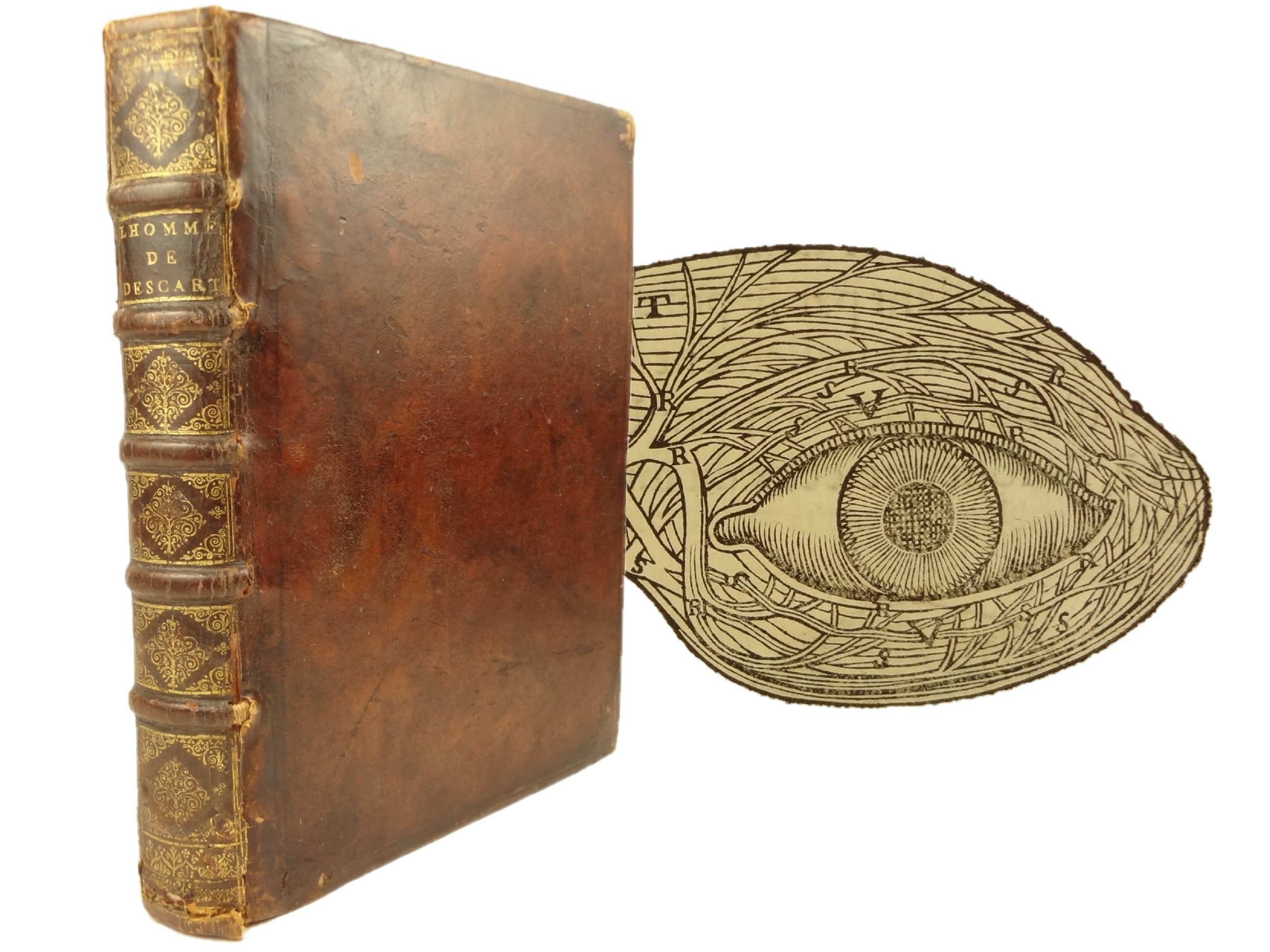 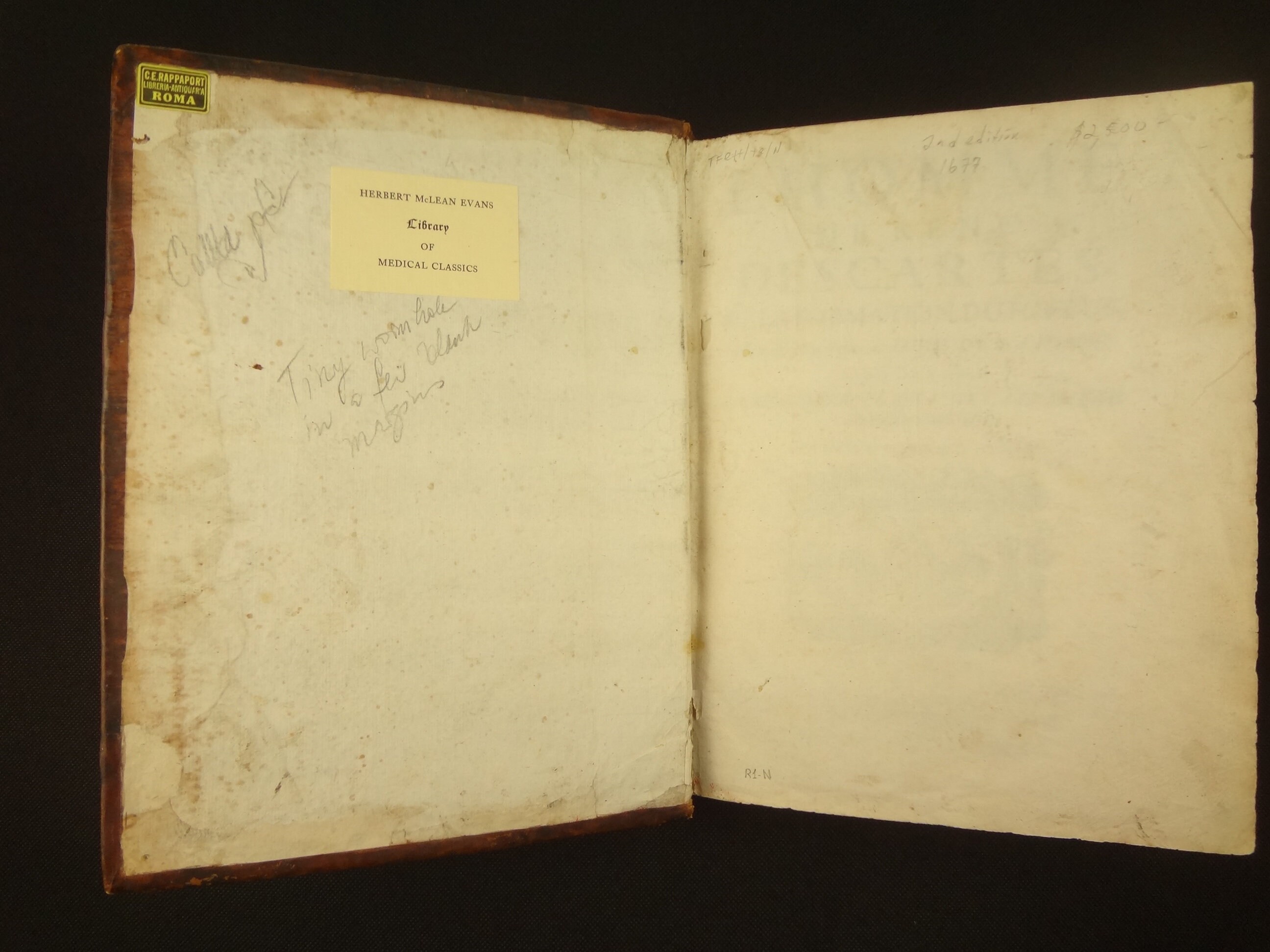 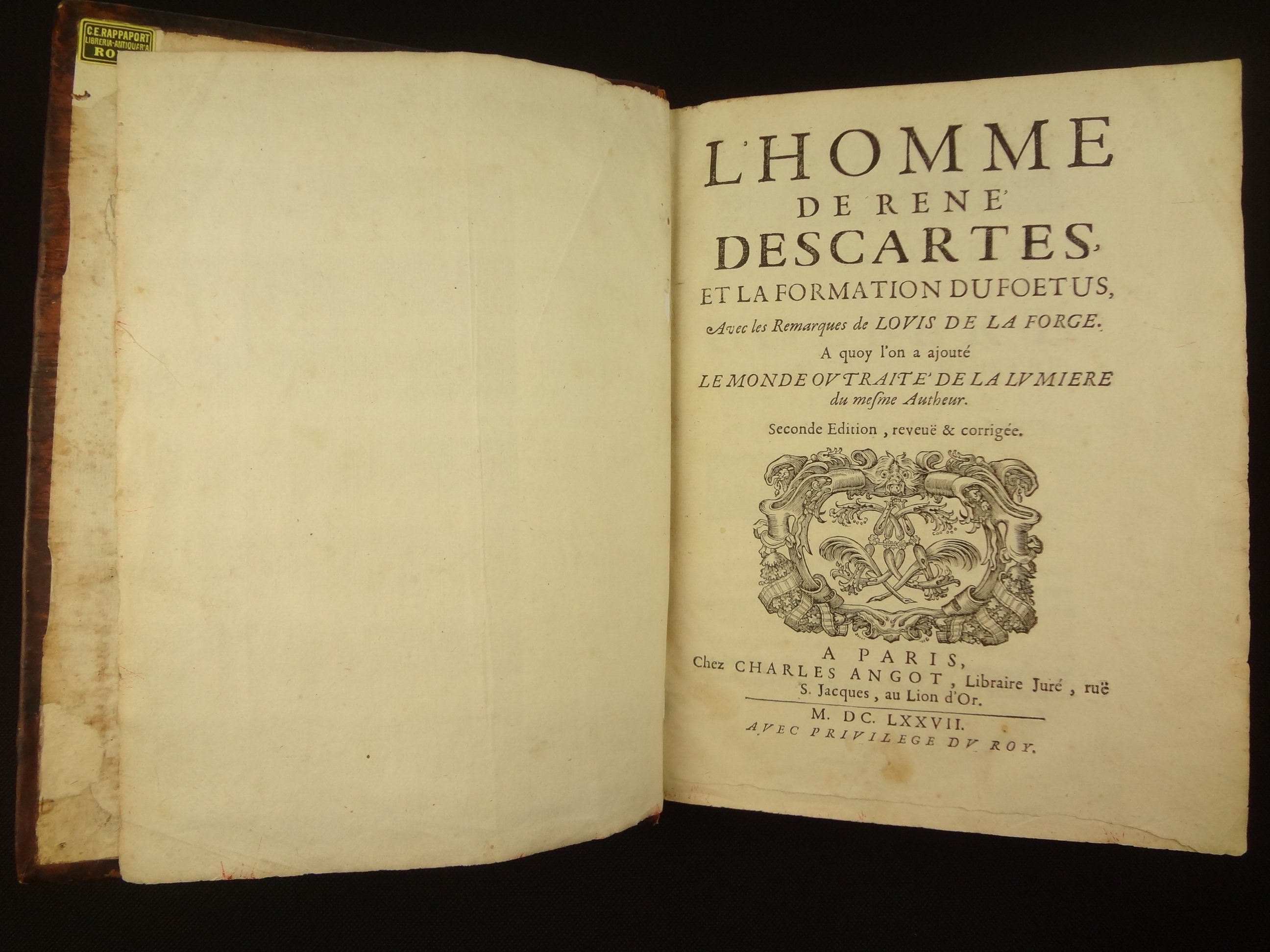 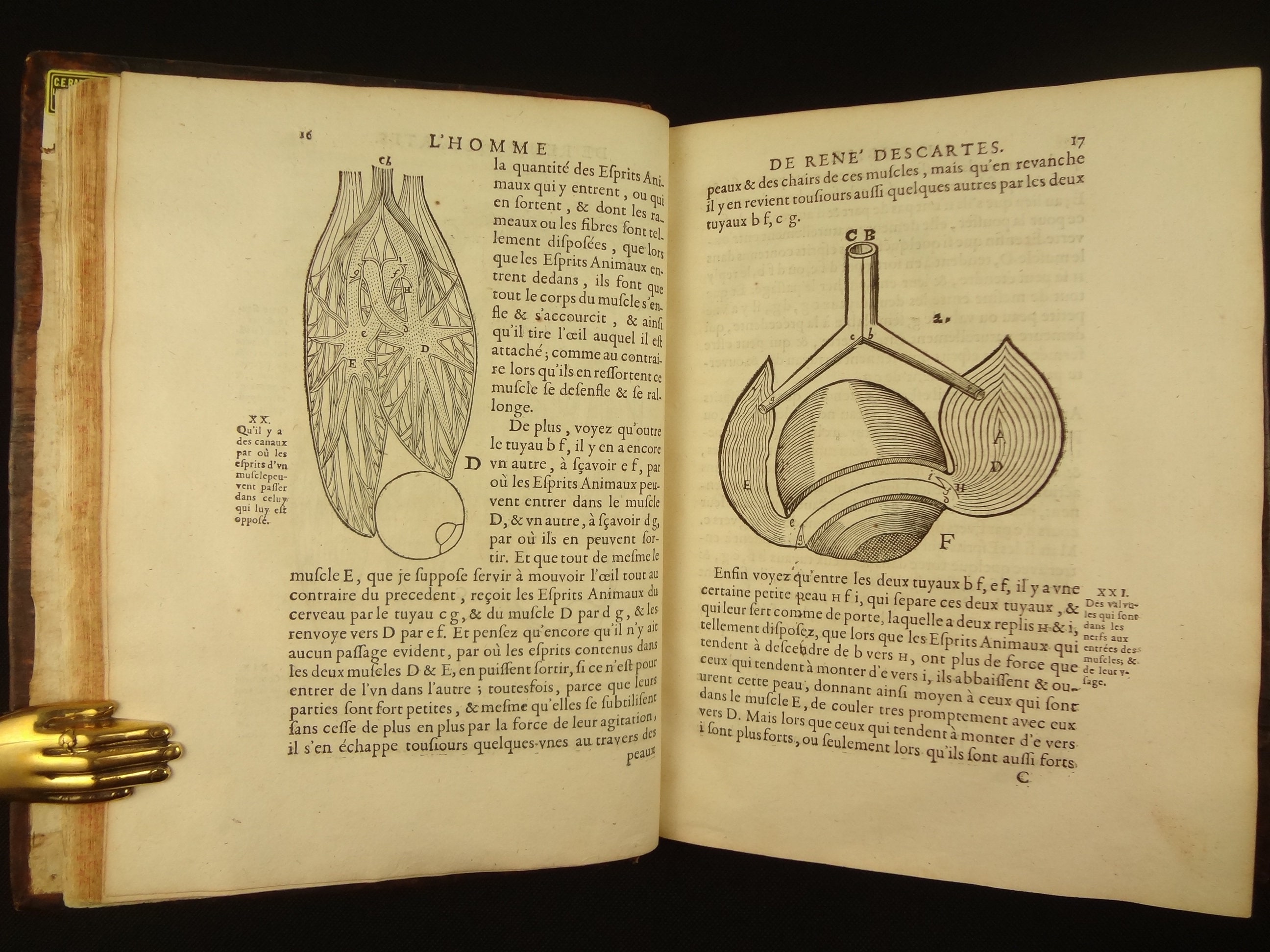 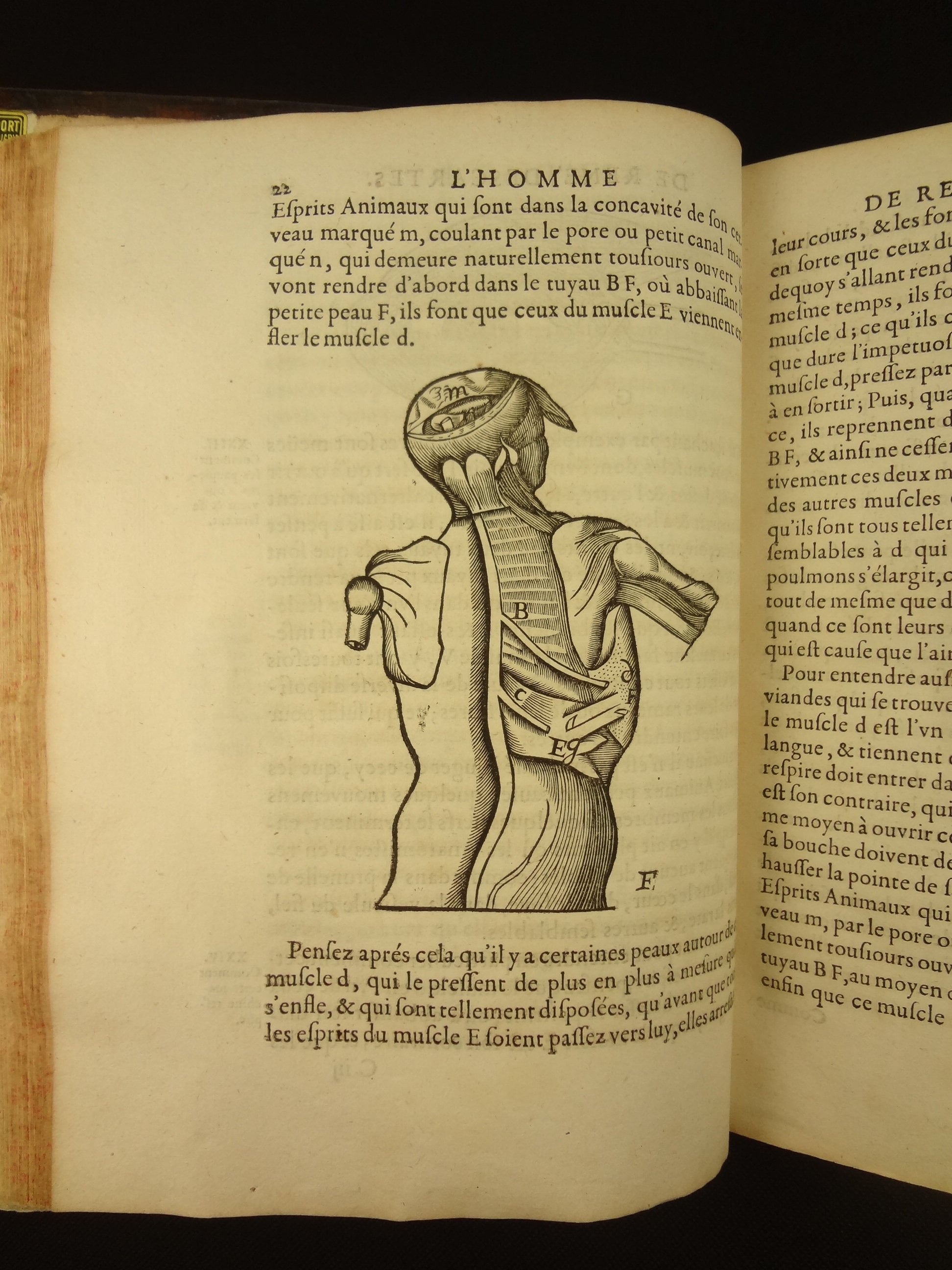 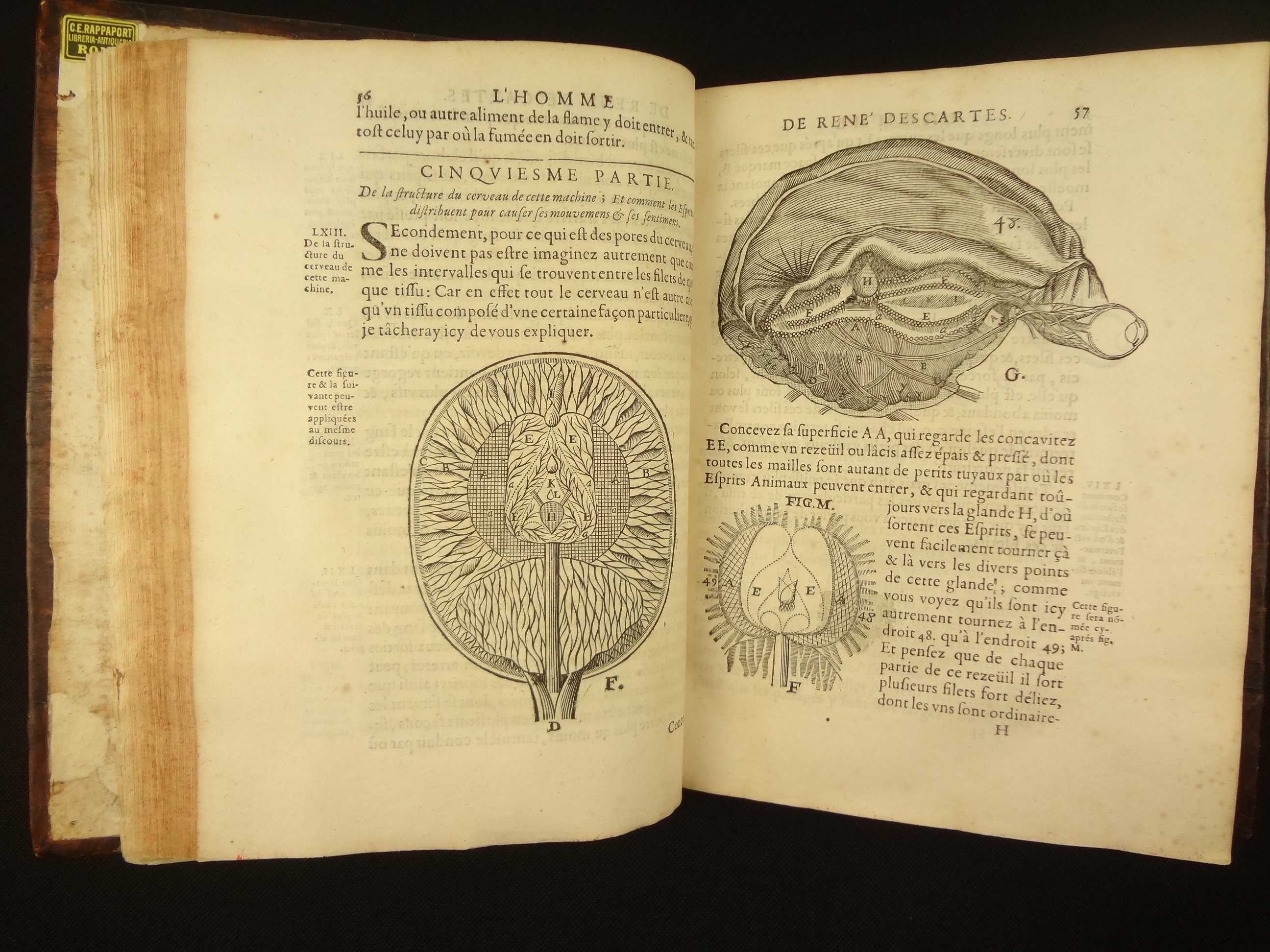 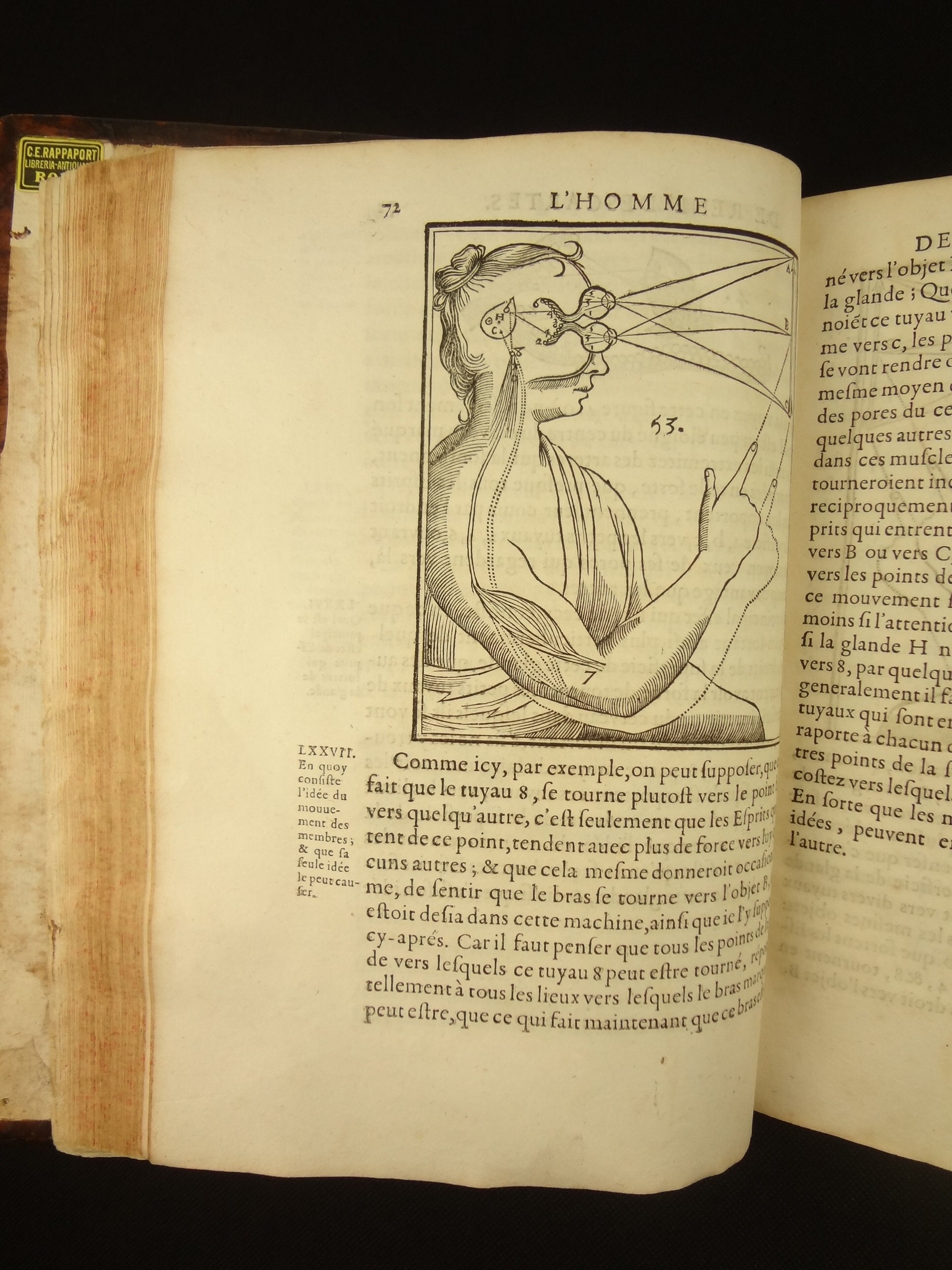 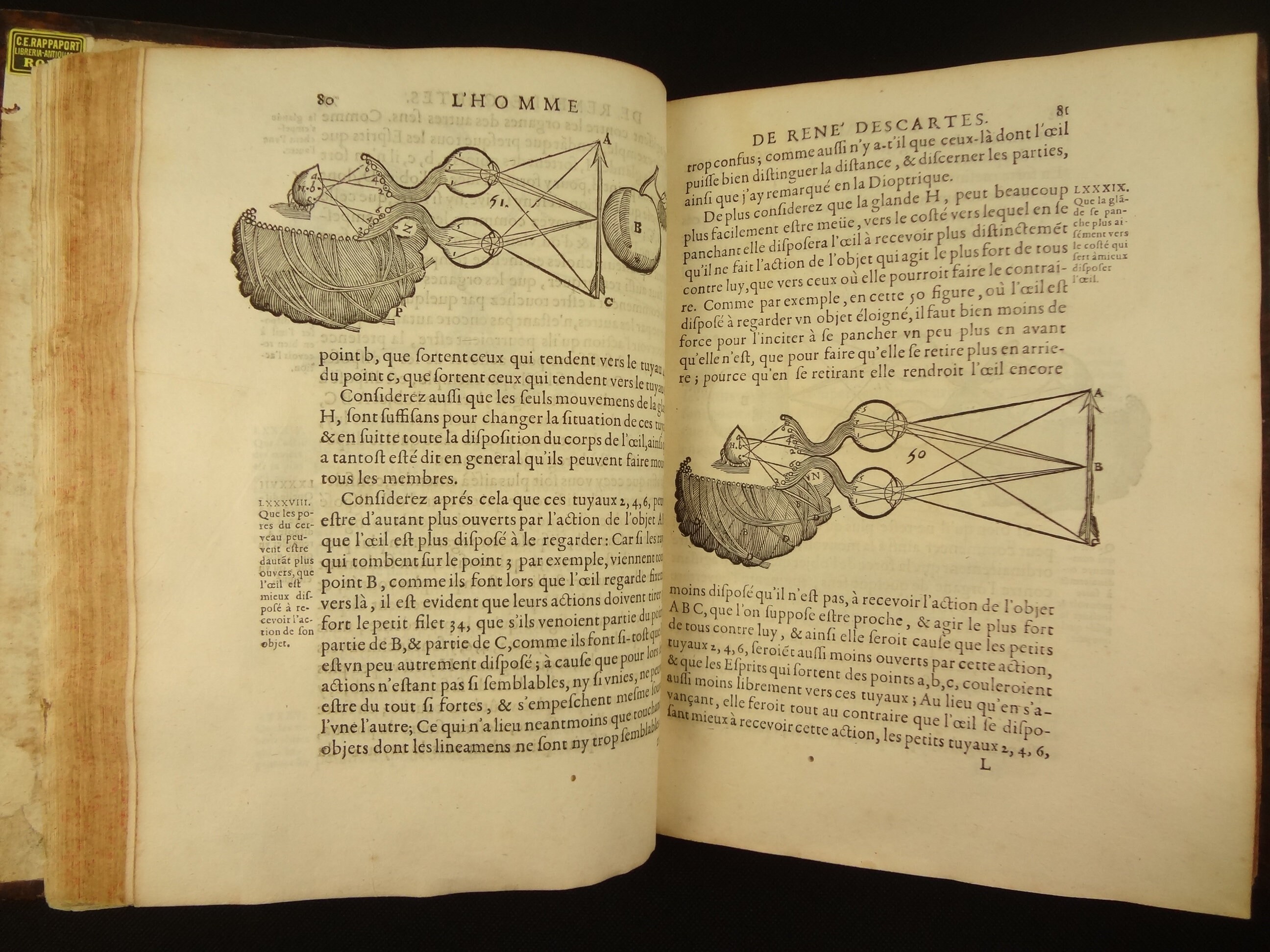 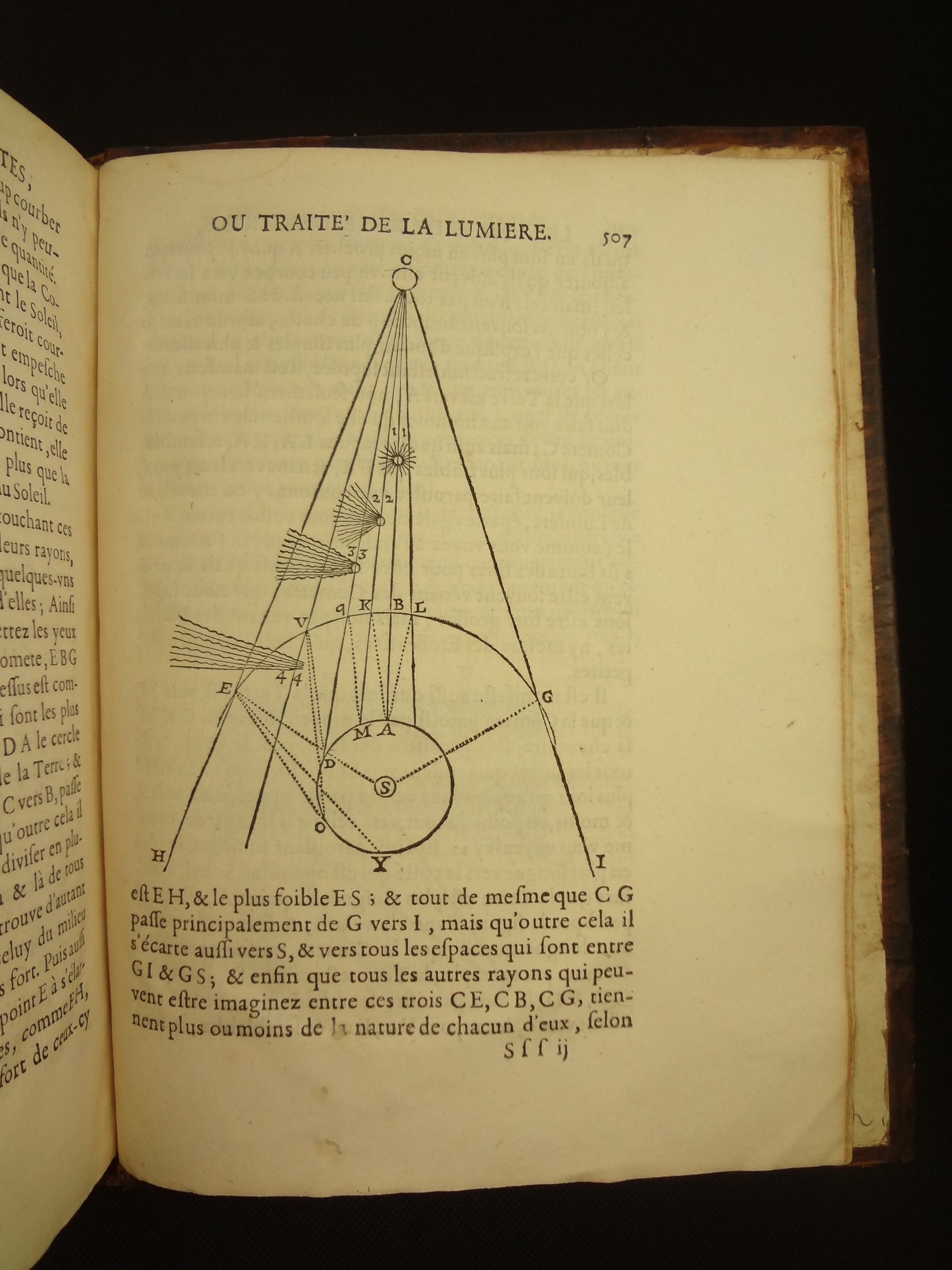 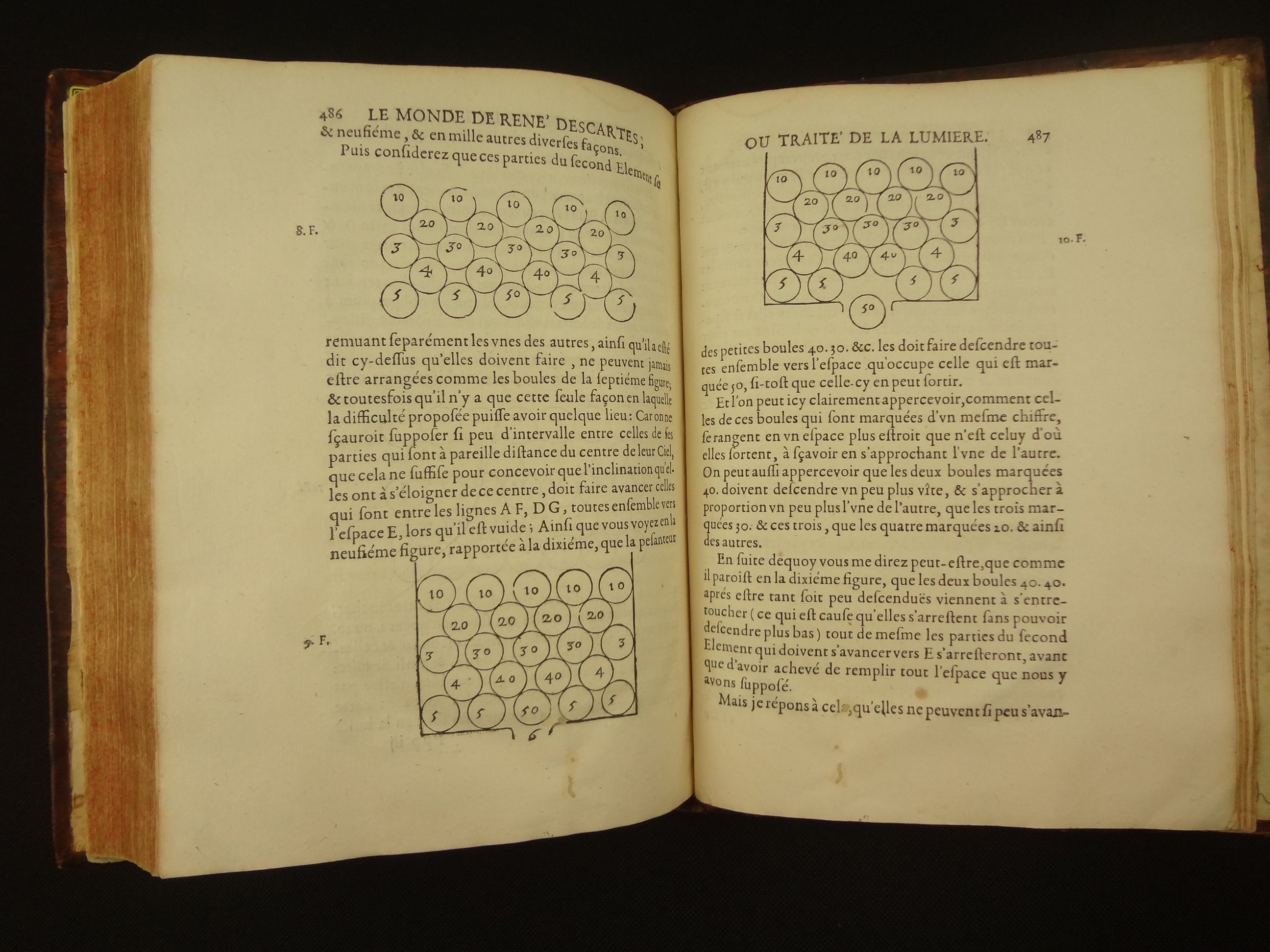 Well-illustrated, second French edition (reviewed and corrected from the first) 1677 René Descartes L'Homme (The Man) et la Formation du Foetus (Formation of the Fetus), and (added to this edition) Le Monde, ou Traité de la Lumiere (The World, or Treatise on the Light). This copy with the provenance of a noted scientist.

A lot to unpack here; might I suggest that you review the Wikipedia articles on the Descartes works "Treatise on Man" and "The World".

In extreme short (and, therefore, a poor description), there are three works of Descartes here, which blended science and philosophy. The treatise on man, and the fetus, he didn't feel confident to publish after Galileo's condemnation, so they are here only published for the second time (corrected from the first edition, with remarks of Louis de la Forge) and they are not "finished" as Descartes didn't prepare them for publication. The World was added to this second edition.

The books on man and the fetus delve into Descartes theories on the body, it's mechanisms, and how the psychosomatic affects it. It is illustrated; I see other booksellers count the illustrations but I'm hesitant to claim the right number as many are next to each other so... (was it one, or two plates?) I counted 49 engravings (about the subject) in these first two books. I reviewed the signatures on the quires/gatherings, there are no missing pages. There are also numerous typographic decorative tailpieces.

The third work (again, a poor brief description), The World, was added to this second edition. According to the Wikipedia article, this is the first complete printing of this work. "Descartes espoused mechanical philosophy, a form of natural philosophy popular in the 17th century. He thought everything physical in the universe to be made of tiny corpuscles of matter. Corpuscularianism is closely related to atomism. The World presents a corpuscularian cosmology in which swirling vortices explain, among other phenomena, the creation of the Solar System and the circular motion of planets around the Sun. The World rests on the heliocentric view, first explicated in Western Europe by Copernicus. Descartes delayed the book's release upon news of the Roman Inquisition's conviction of Galileo for "suspicion of heresy" and sentencing to house arrest. Descartes discussed his work on the book, and his decision not to release it, in letters with another philosopher, Marin Mersenne."

Bookplate of the scientist Herbert Mclean Evans, who is credited with discovering Vitamin E.

Worldcat reveals several publishers shared this 1677 printing. This is the Angot title page, which there are three records for, which five of the world's libraries hold:

Edited with a dedicatory letter and preface by Claude Clerselier. Schyl's preface to the Latin edition on 369-404.

See pictures. Binding has been rebacked, but it was long ago; still with wear to corners, edges, rubs to boards, etc.. Some cracking along joints. Some loss to gilt of spine. A few tiny wormholes entering the leather. Chip at very base of spine that will likely fall off and expose bottom endband. Still, nice that they retained the earlier binding and the book is holding together well.

Despite notes, a solid and honest book, cared for (once repaired, long ago), with wide margins.