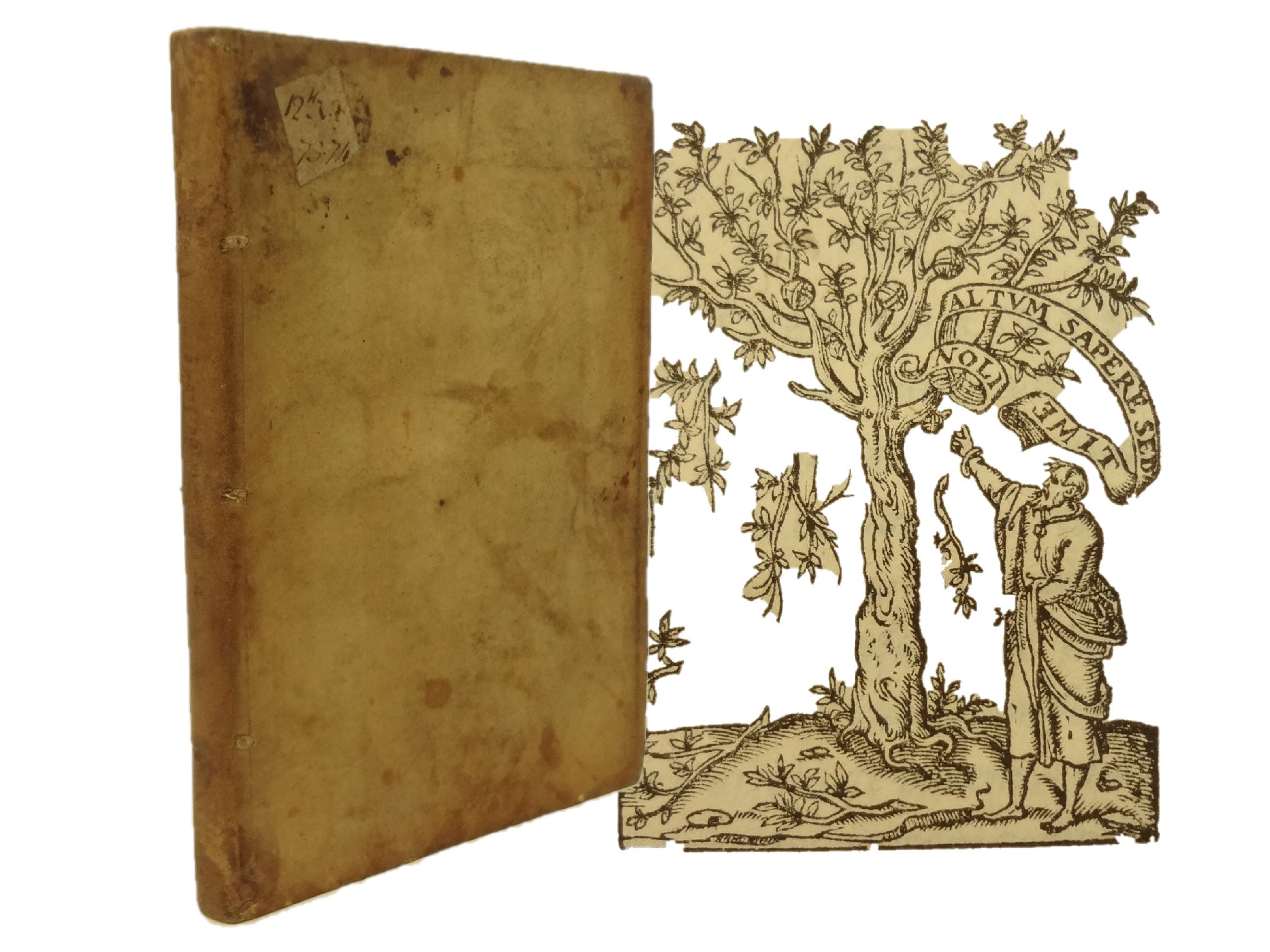 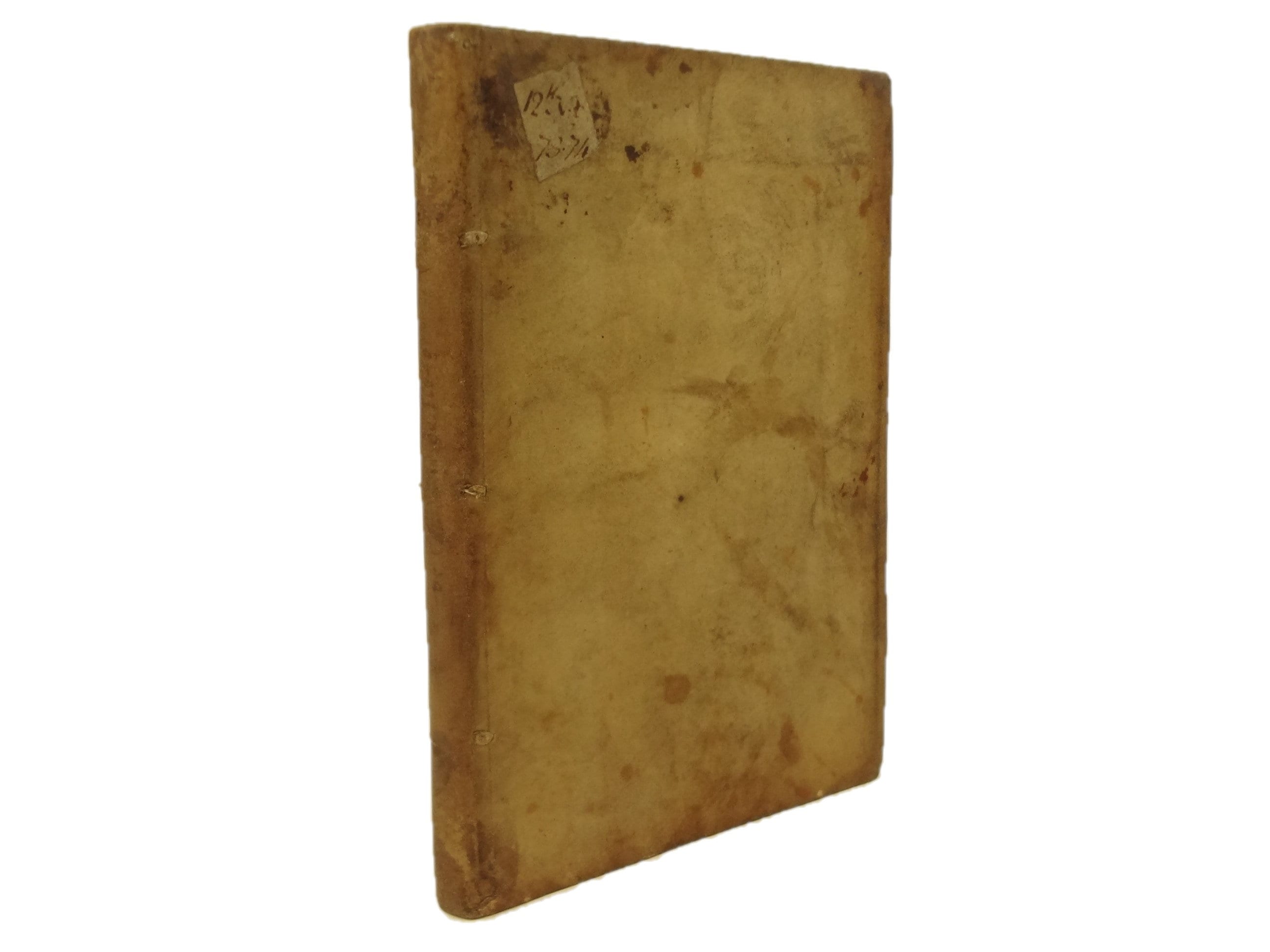 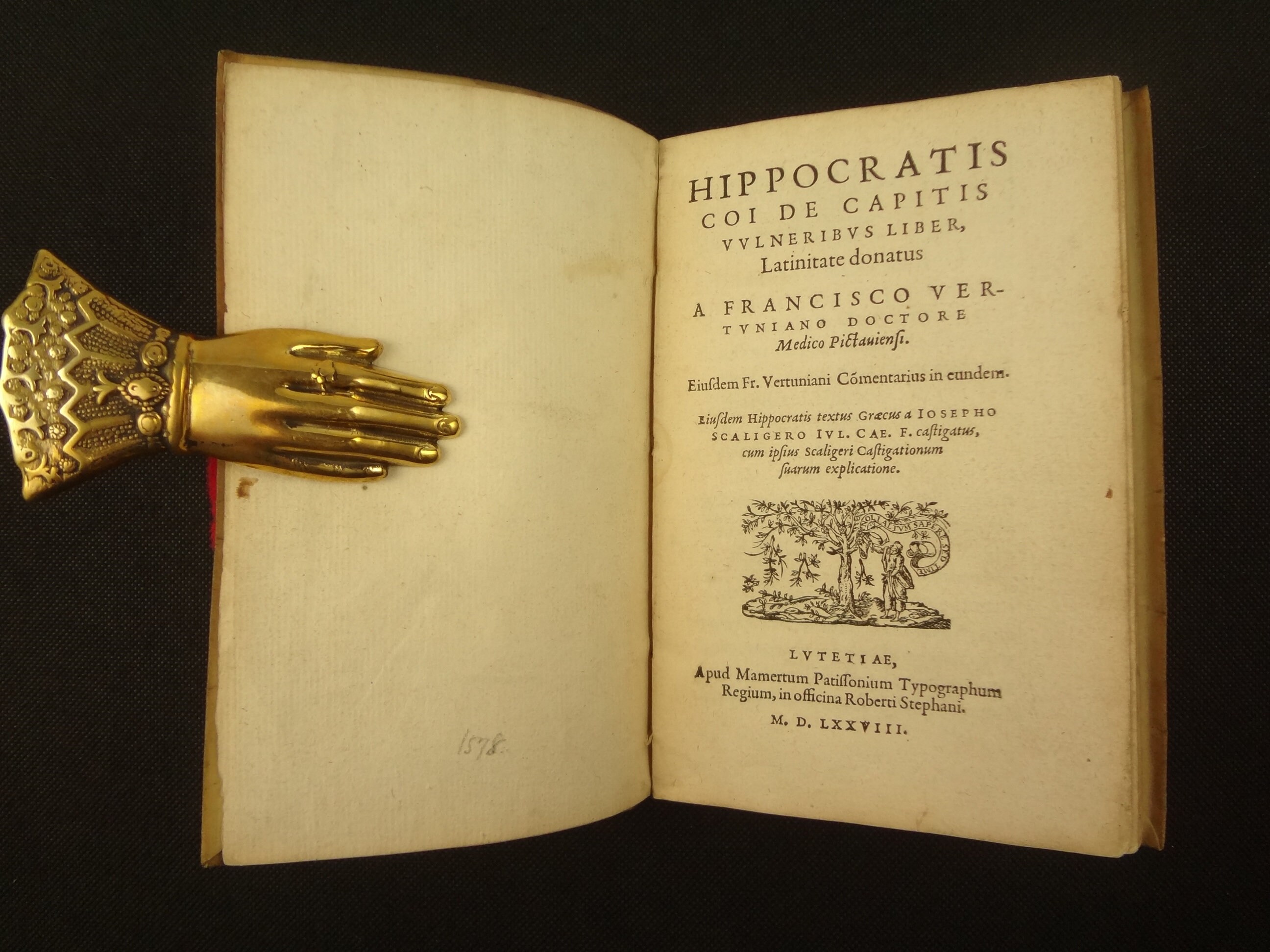 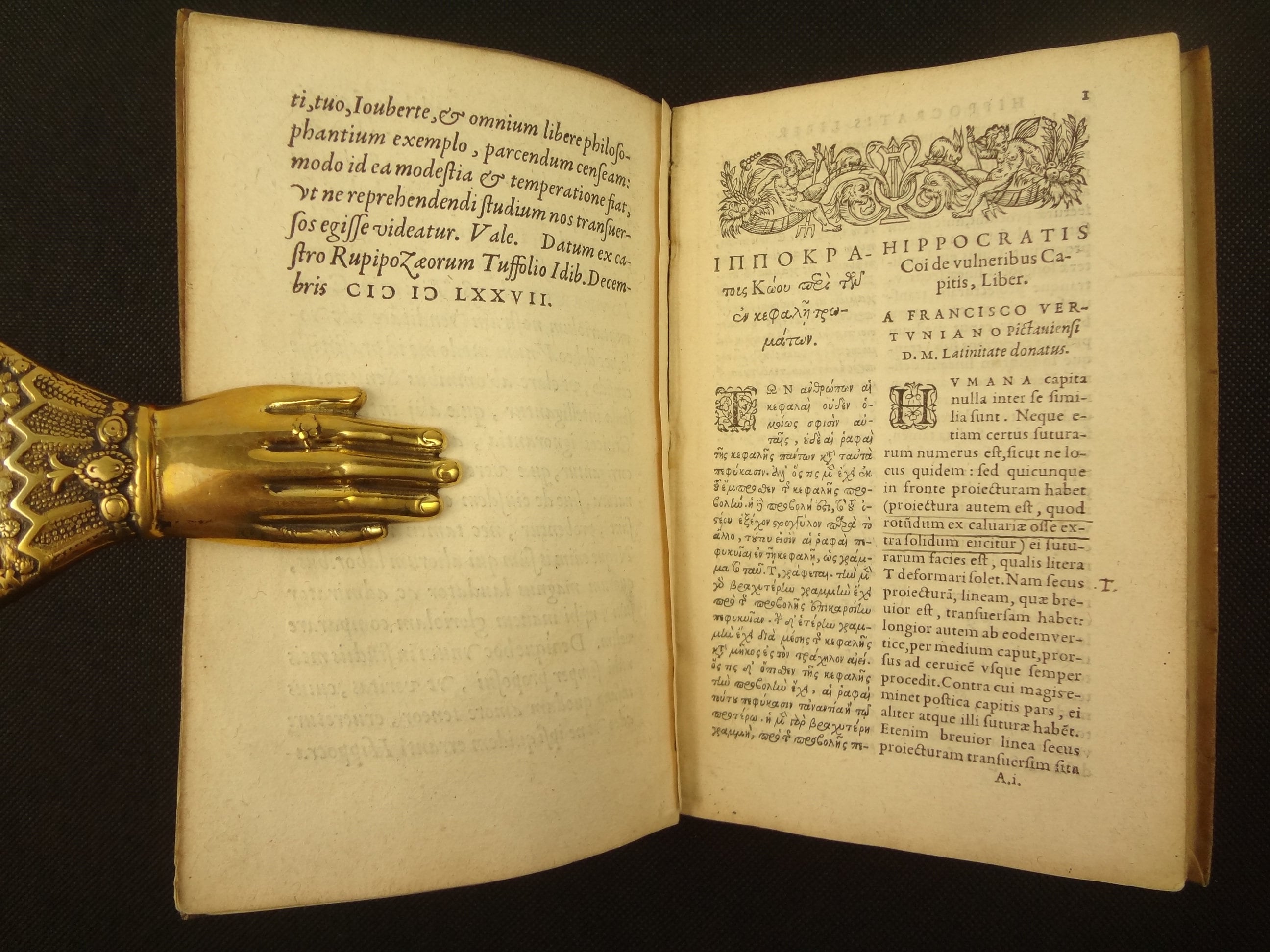 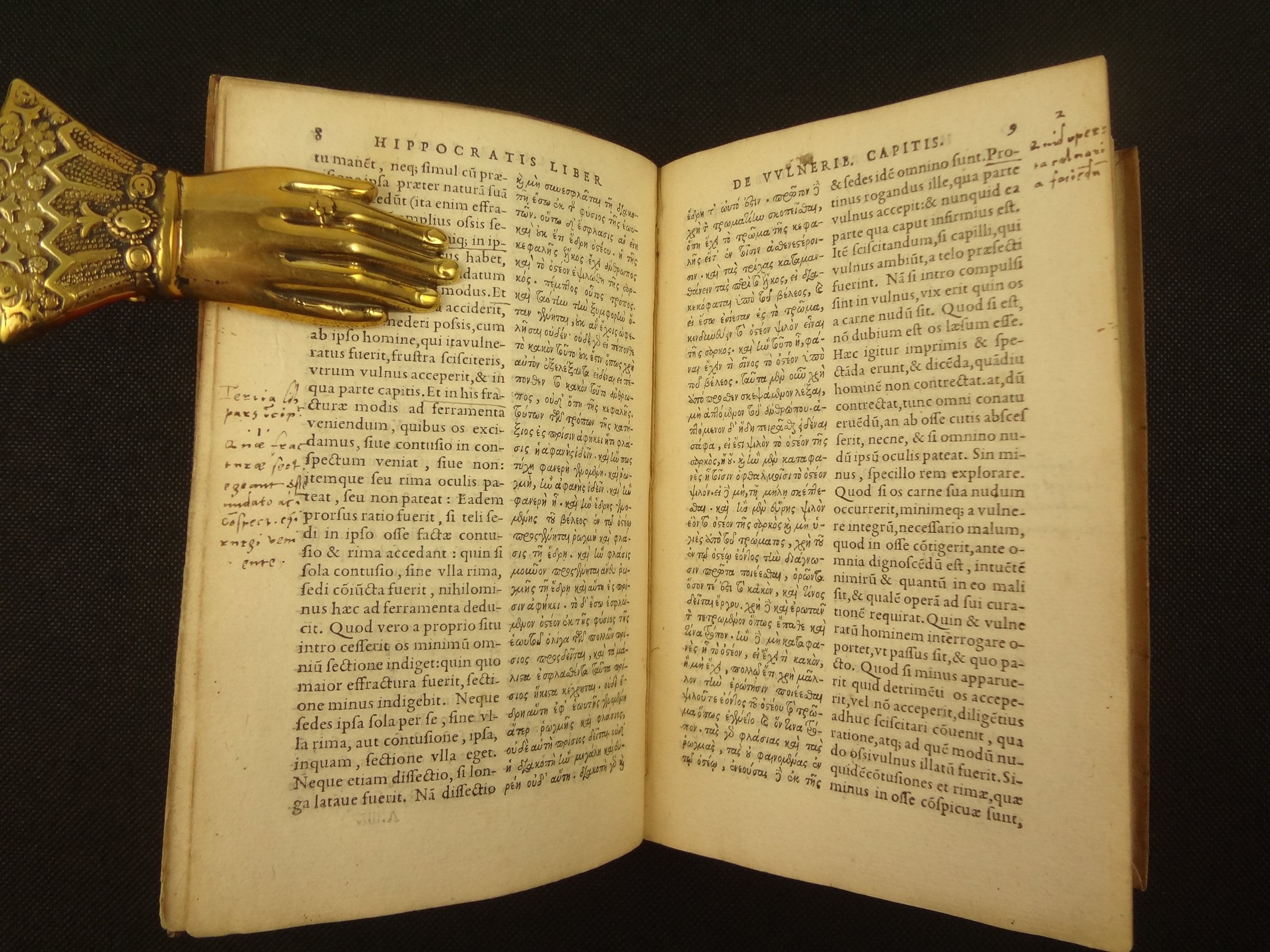 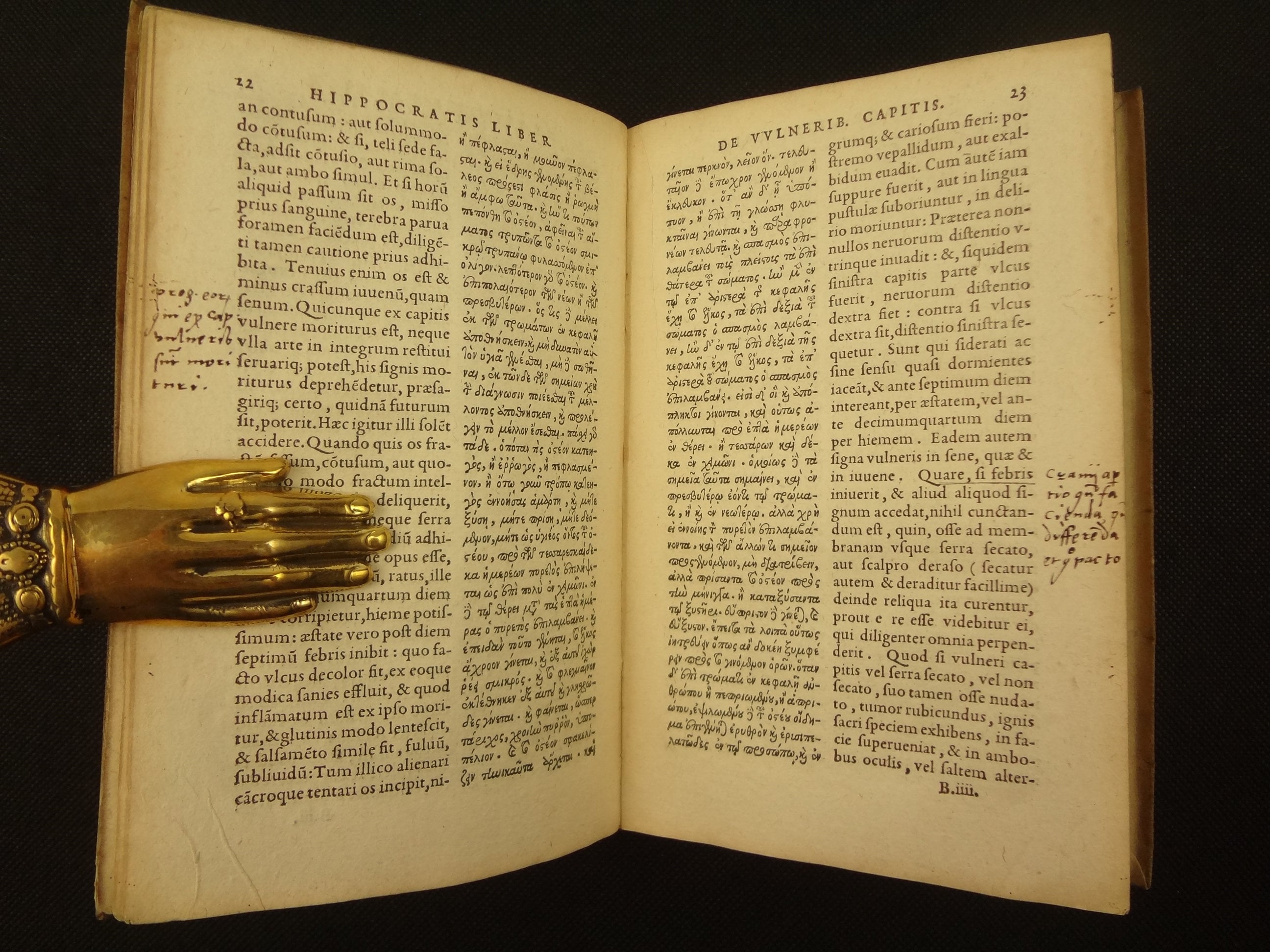 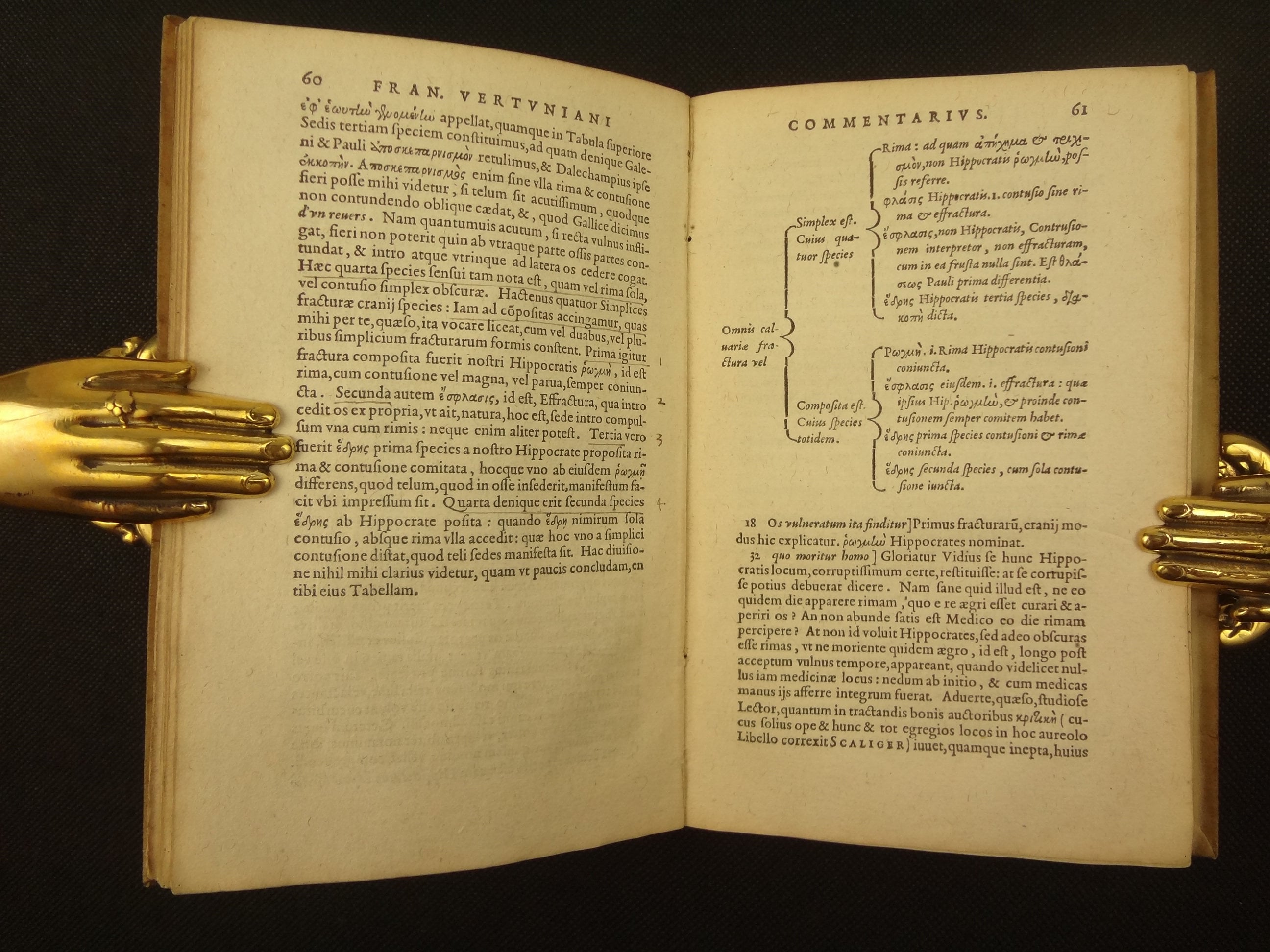 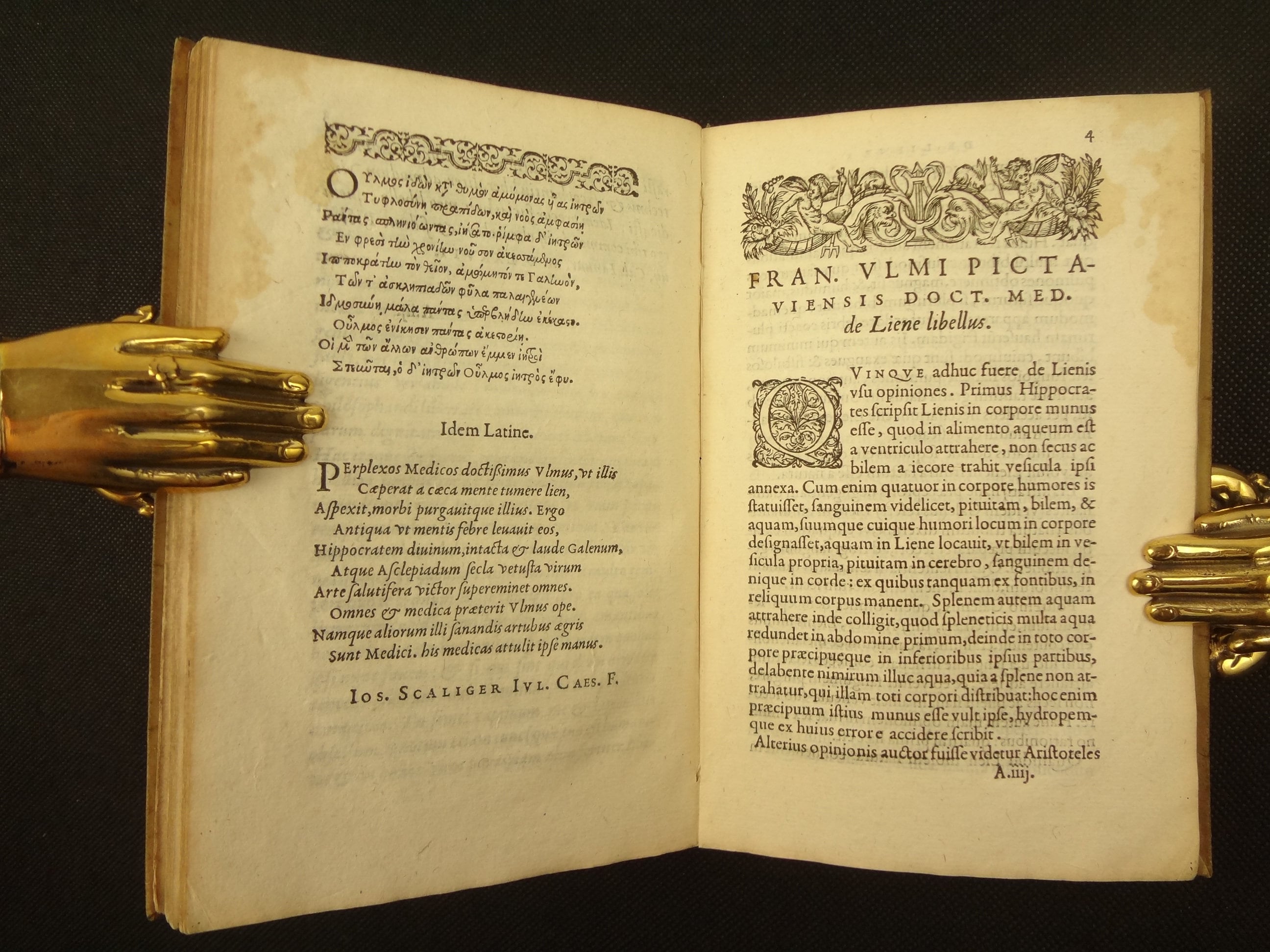 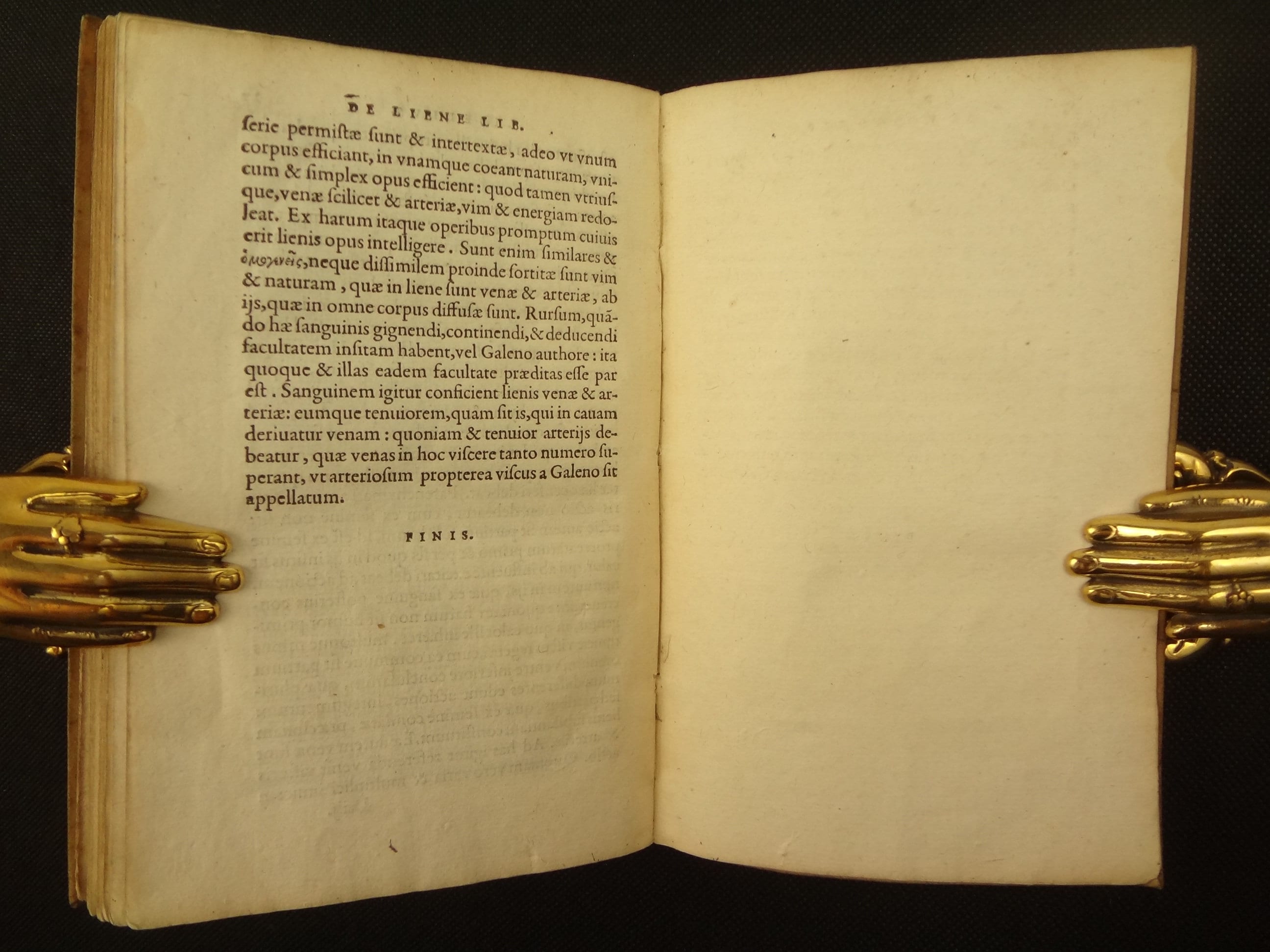 Medical. First edition of the first treatise on the spleen. 1578 De Liene Libellus (Umeau), bound after Hippocrates on head wounds.

Two important medical works, printed in 1578, bound together; Francois Umeau's groundbreaking treatise on the functions of the spleen (first edition) bound behind a stand-alone printing of Hippocrates' treatise on head wounds (parallel Greek and Latin texts).

The Hippocratic work is missing a fold-out woodcut of fractures of the cranium, but is well-annotated in an old hand.

This copy once offered in the Early Science and Medicine catalogue of Deborah Coltham Rare Books for 1,800 British pounds.

“The De liene libellus (1578), a highly influential book by a very obscure physician from Poitiers, brought debate about the spleen to a head. Unlike the writings on the spleen that have been considered so far, the De liene libellus by Franciscus Ulmus is a short monograph on the spleen rather than a passing chapter in a general anatomy book. Another reason for its impact is the startling modification produced by Ulmus in the Aristotelian idea of the function of the spleen. Ulmus agreed with Aristotle that the spleen made blood, but this was not poor quality venous blood which was added to that produced by the liver. Instead, Ulmus turned his attention to the arterial system. Up to the time of Harvey the origin of venous blood generally was thought to be the liver, whilst arterial blood was believed to be prepared out of a mixture of venous blood and vital spirits in the left ventricle of the heart. Ulmus decided that the use of the spleen was for ‘the precoction or preparation of arterial blood’… Ulmus thus changed the status of the spleen. Instead of being a cleansing or auxiliary blood-making organ it now manufactured an essential substance for the body. This was a radical departure from previous views. The theory did not entail only a change in the function of the spleen, it required major changes in the accepted anatomy and physiology of the blood system.” - Andrew Wear, p. 53, The Spleen in Renaissance Anatomy, 1977


"The first monograph on the spleen, and one of the first treatises on a single organ. The author compares his clinical observations with classical and contemporary sources, including Joubert, Colombo and Botallo. The prefatory Greek and Latin verses lauding Umeau are by Scaliger." - Lane Medical Library of Stanford

"Hippocrates' treatise On Wounds in the Head represents an excellent source of information regarding the extent of experience with head injuries in classical antiquity. On the basis of clinical observation, the great physician gives an accurate description of the external appearance and consistency of the cranium. Fractures of the cranium are divided into six main categories, each of which is discussed separately, regarding its mechanism, clinical assessment, and treatment. The medical history and clinical evaluation are considered the most important factors when dealing with cranial trauma. Trepanation, a neurosurgical procedure still in practice today, is presented in detail. As a whole, the treatise, the first written work in medical history dealing exclusively with cranial trauma, reveals that Hippocrates was a pioneer in treating head injuries." - Abstract, Hippocrates: A Pioneer in the Treatment of Head Injuries, Panourias

In this edition, the Greek is translated into Latin by the Doctor Francois Vertunien, and includes commentary of Scaliger.

Mamert Patisson married the widow of Robert Estienne II. This Hippocrates is his only Greek printing.

Not uncommon to find these two works bound together.

See pictures. Some soiling, darkening, thumbing, etc. to vellum binding. A ticket is on the front cover, with a ms. inscription in an old hand. No endpapers/pastedowns. Some notes on rear of front board in graphite. Hippocrates is missing a fold-out of fractures. Paper toned throughout, with an occasional rust spot, candle ember, chipped edge, dog-eared page, etc.. Ink marks on front fly leaves. Some thumbing throughout. Underlining and marginal annotations in an old hand. Good margins, the annotations are not cropped. Occasional tiny wormholes at fore-edge margin. Intermittent moisture mark right at fore-edge margin; only on a handful of leaves does it reach the text. Fore-edge margin mark on verso of Libellus leaf 20, no text affected. Last blank leaf with more soiling and thumbing than the others.