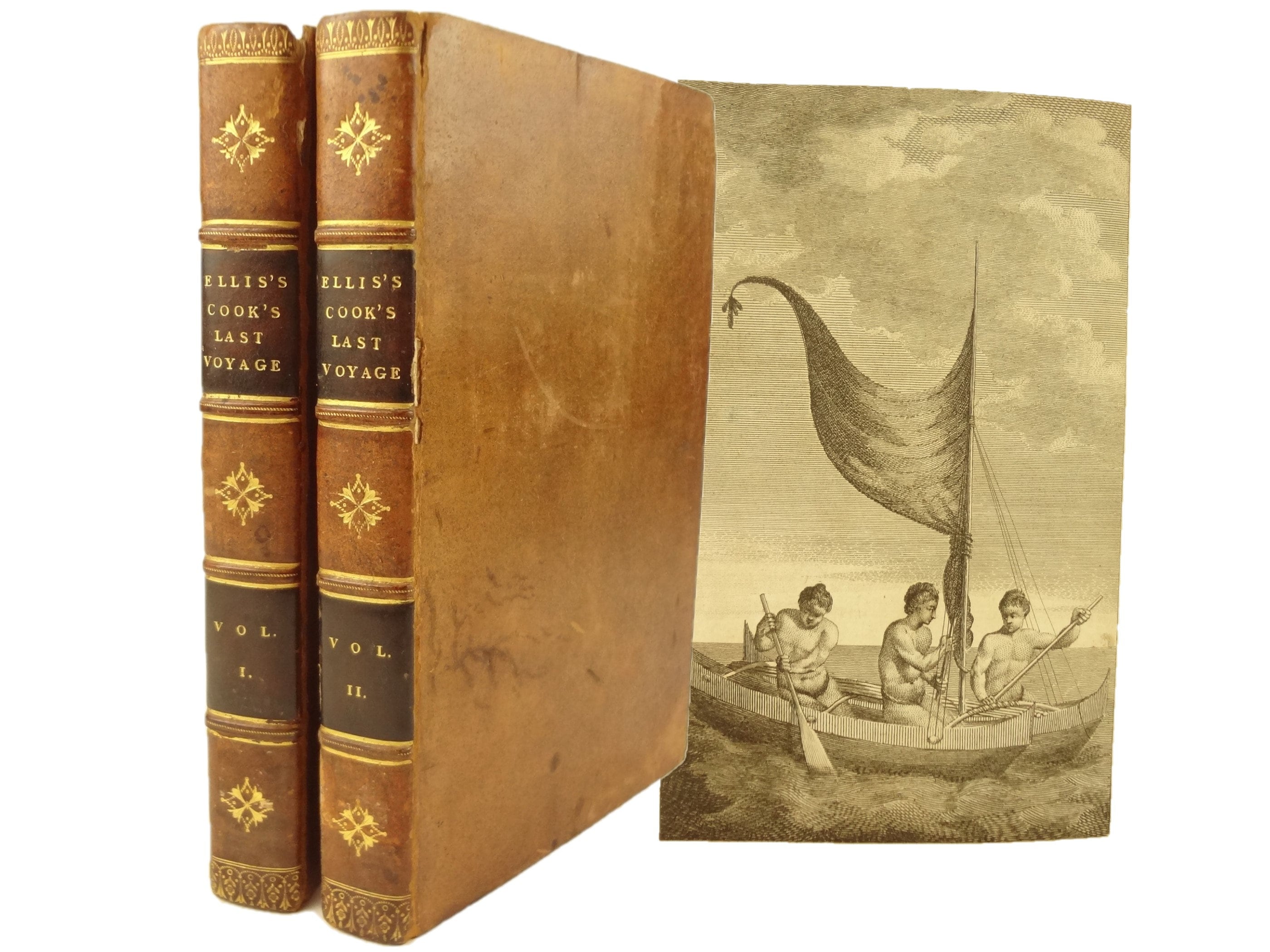 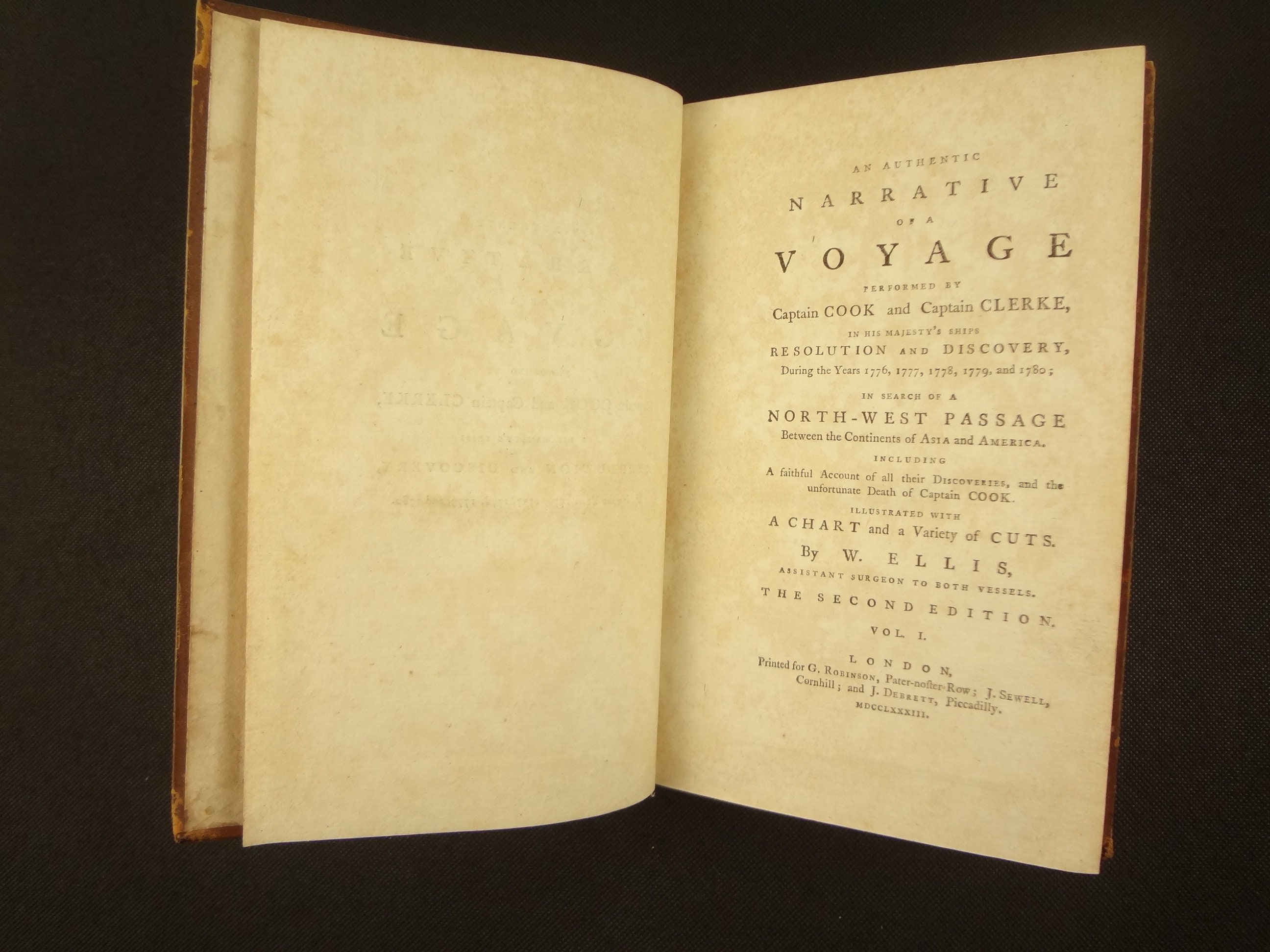 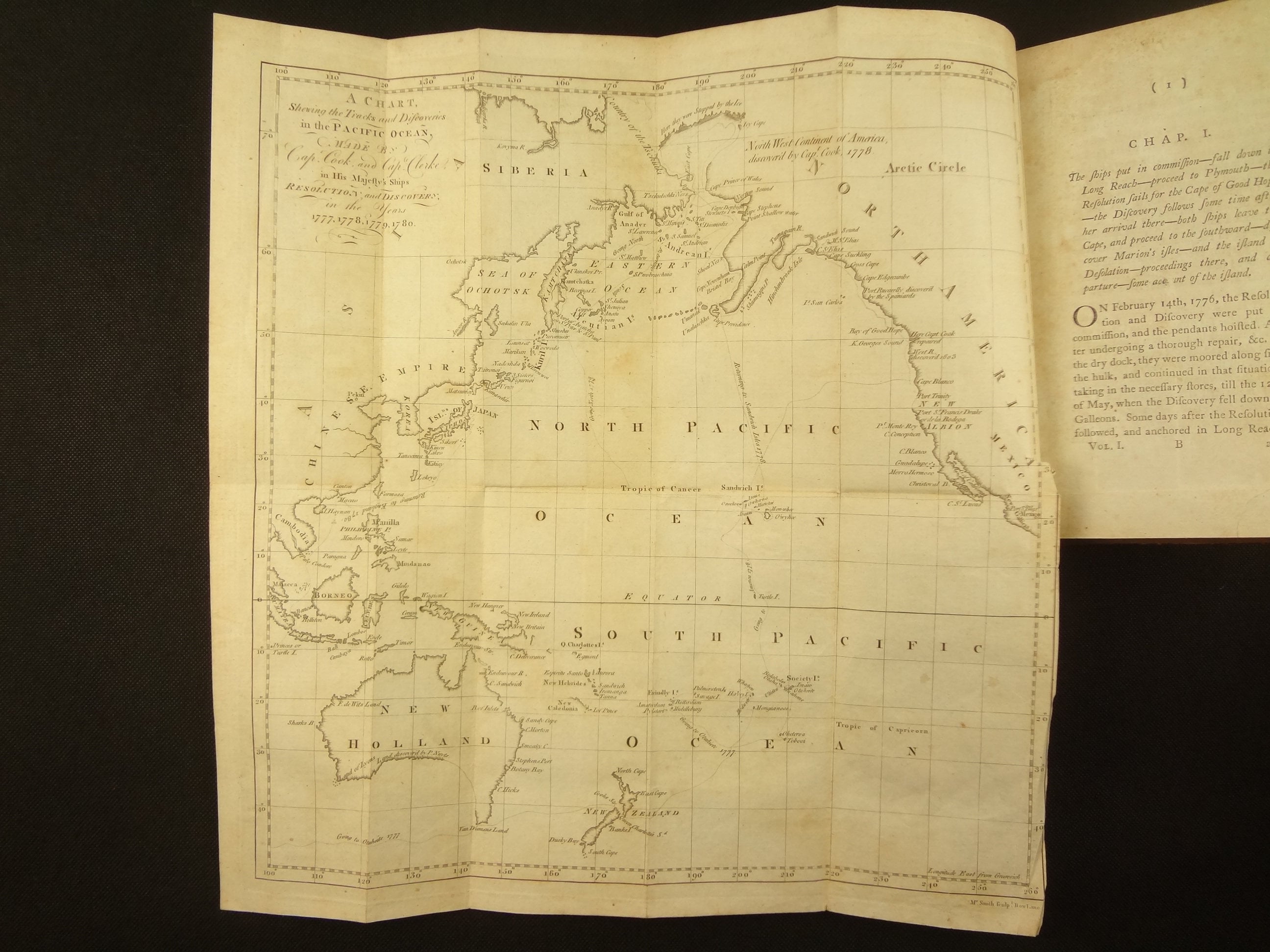 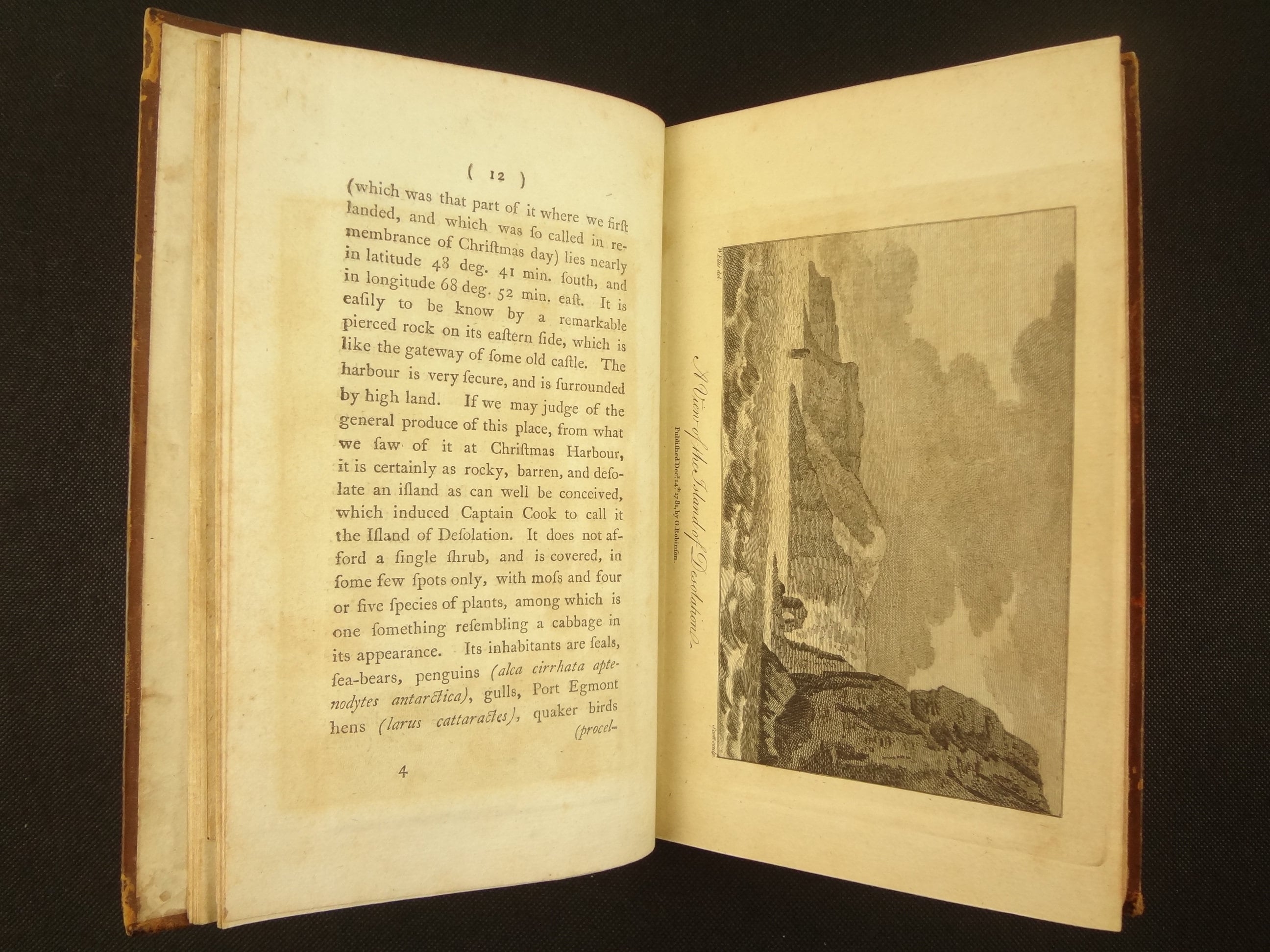 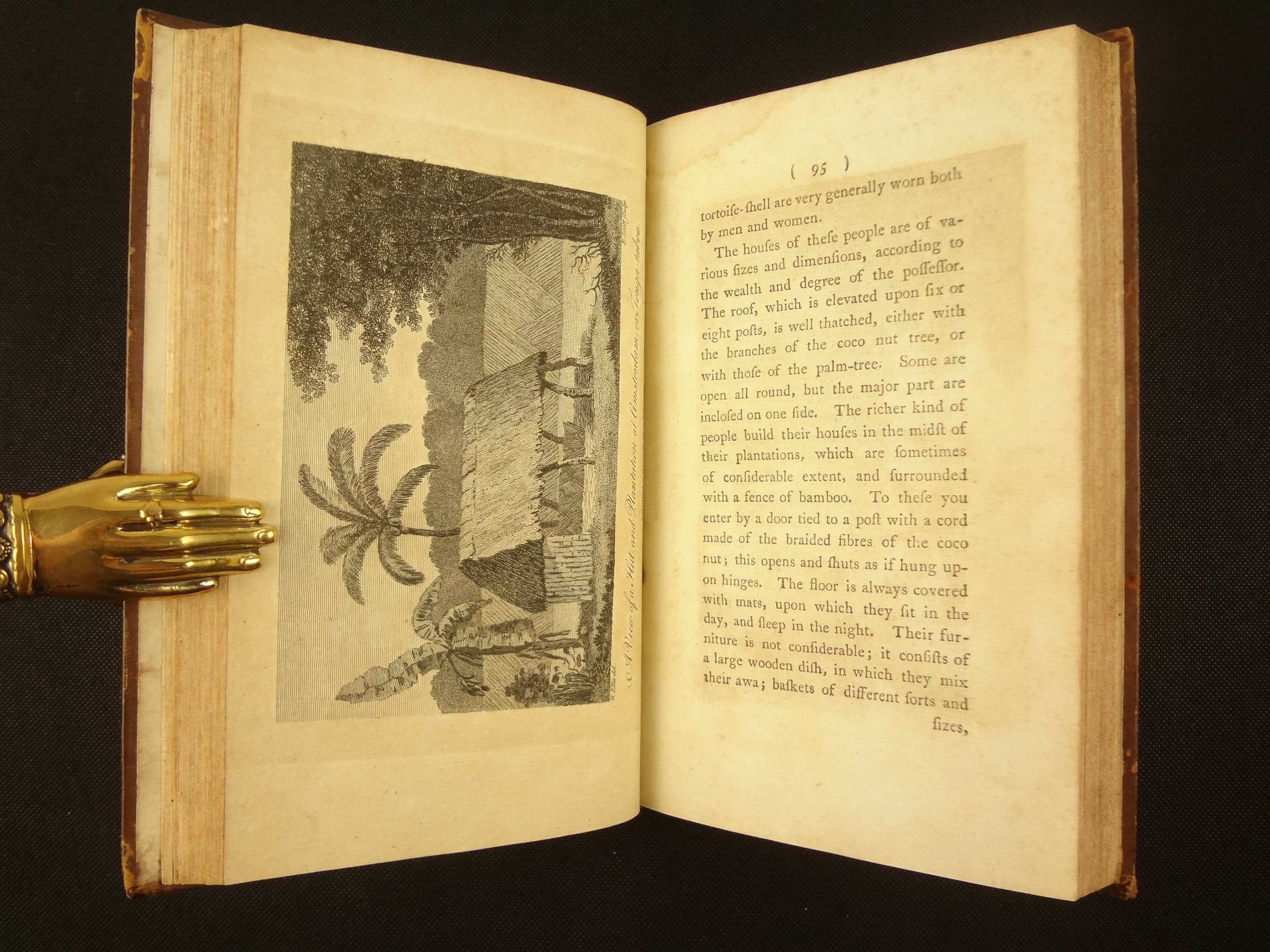 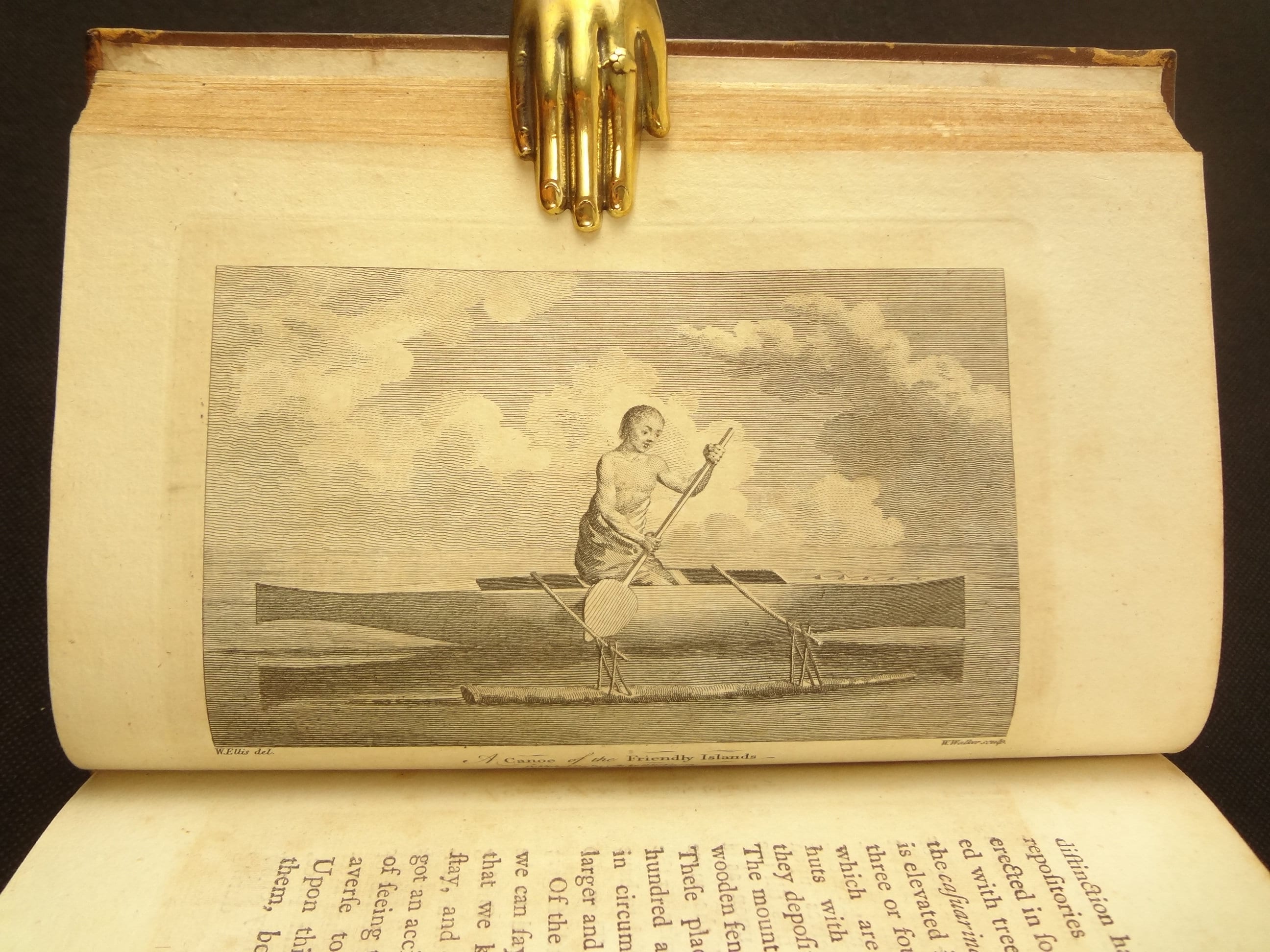 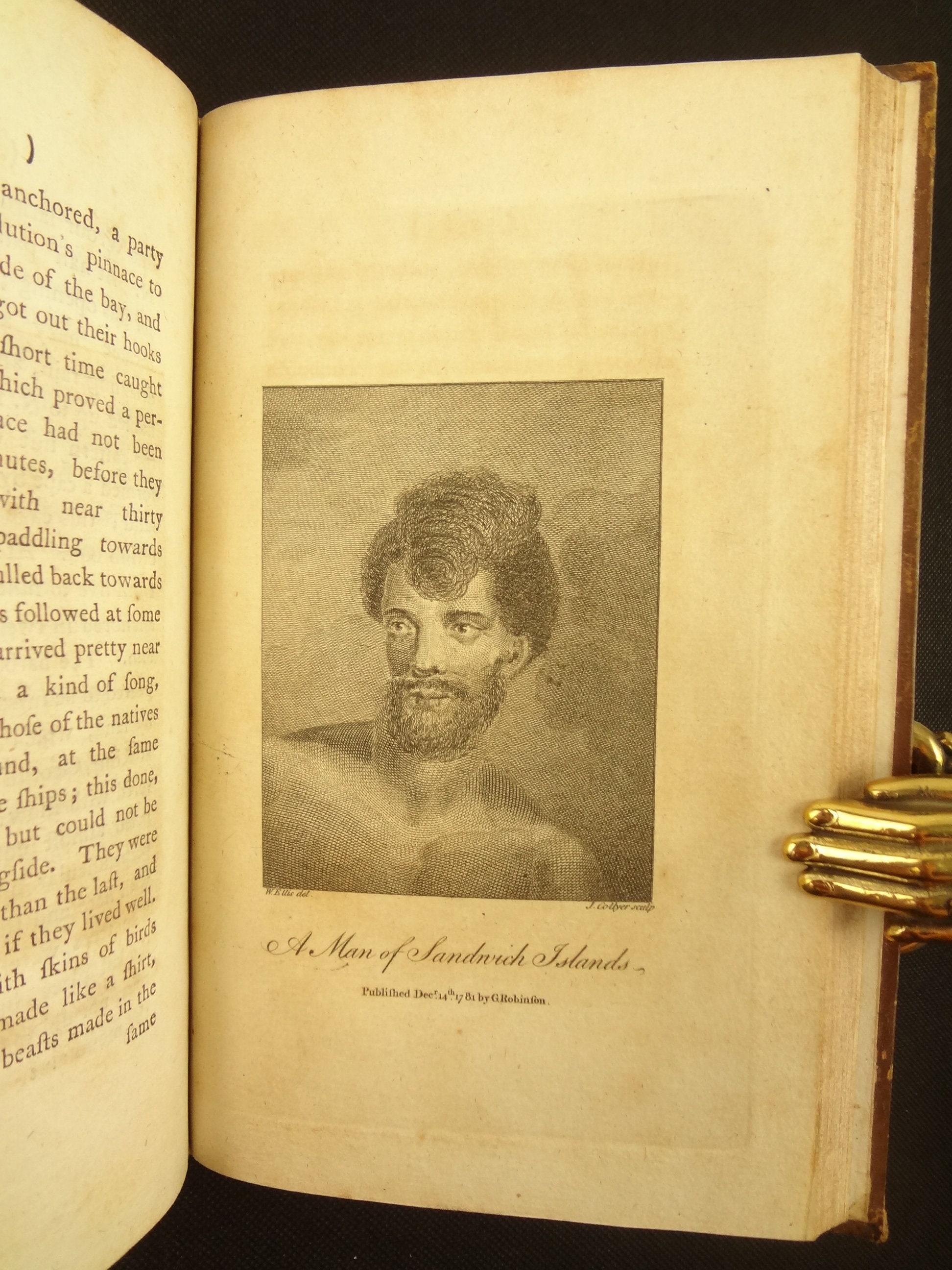 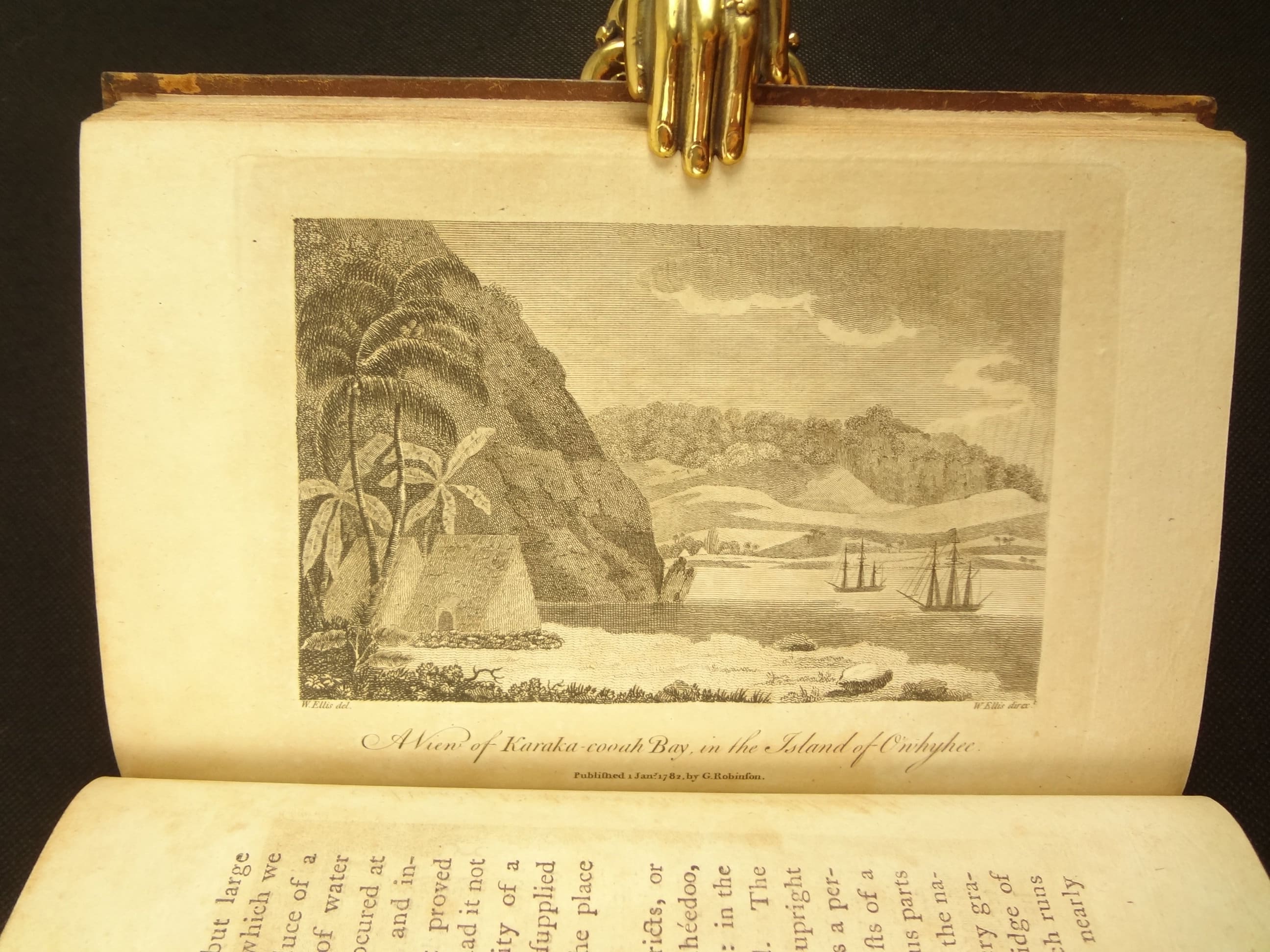 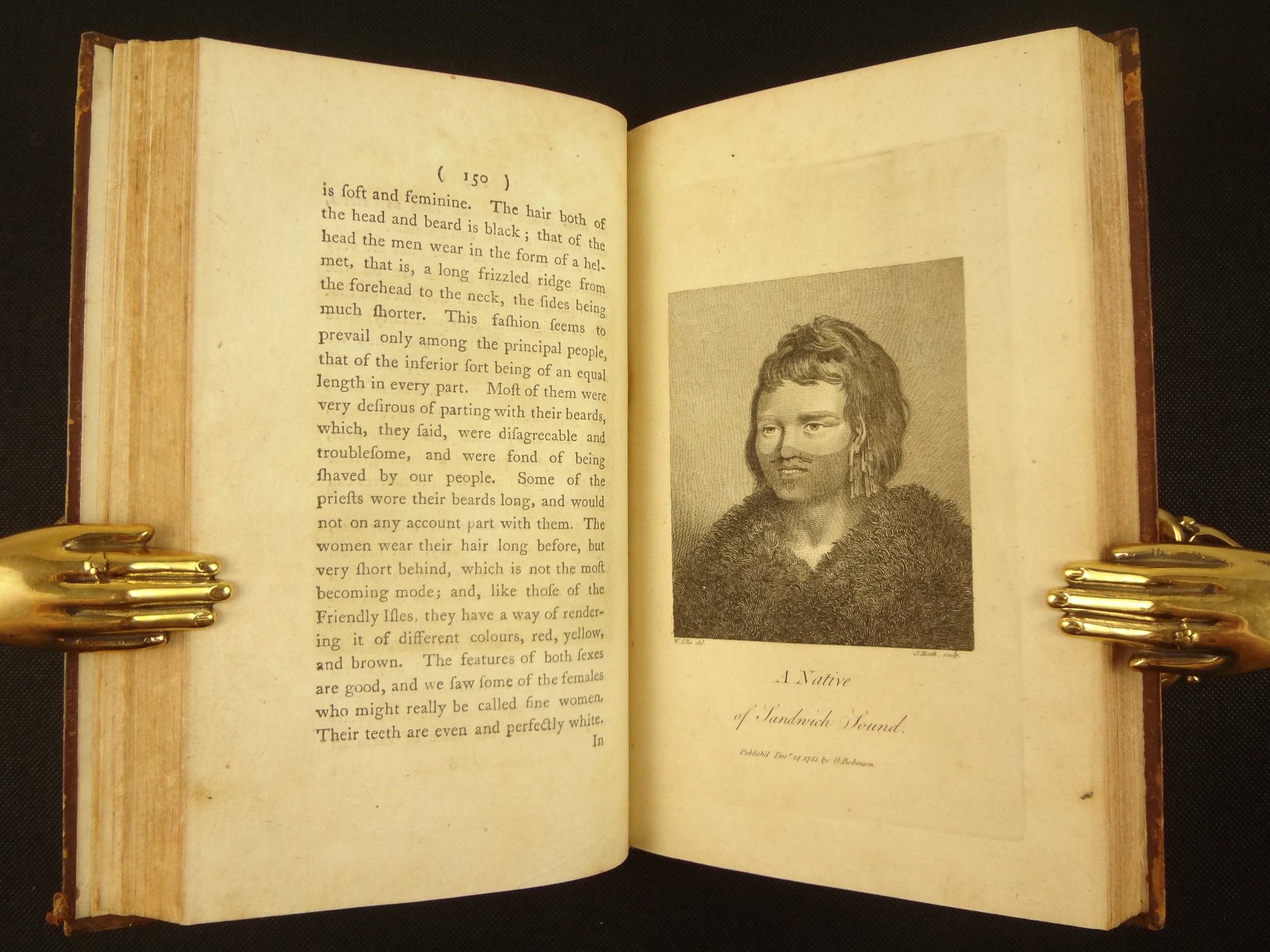 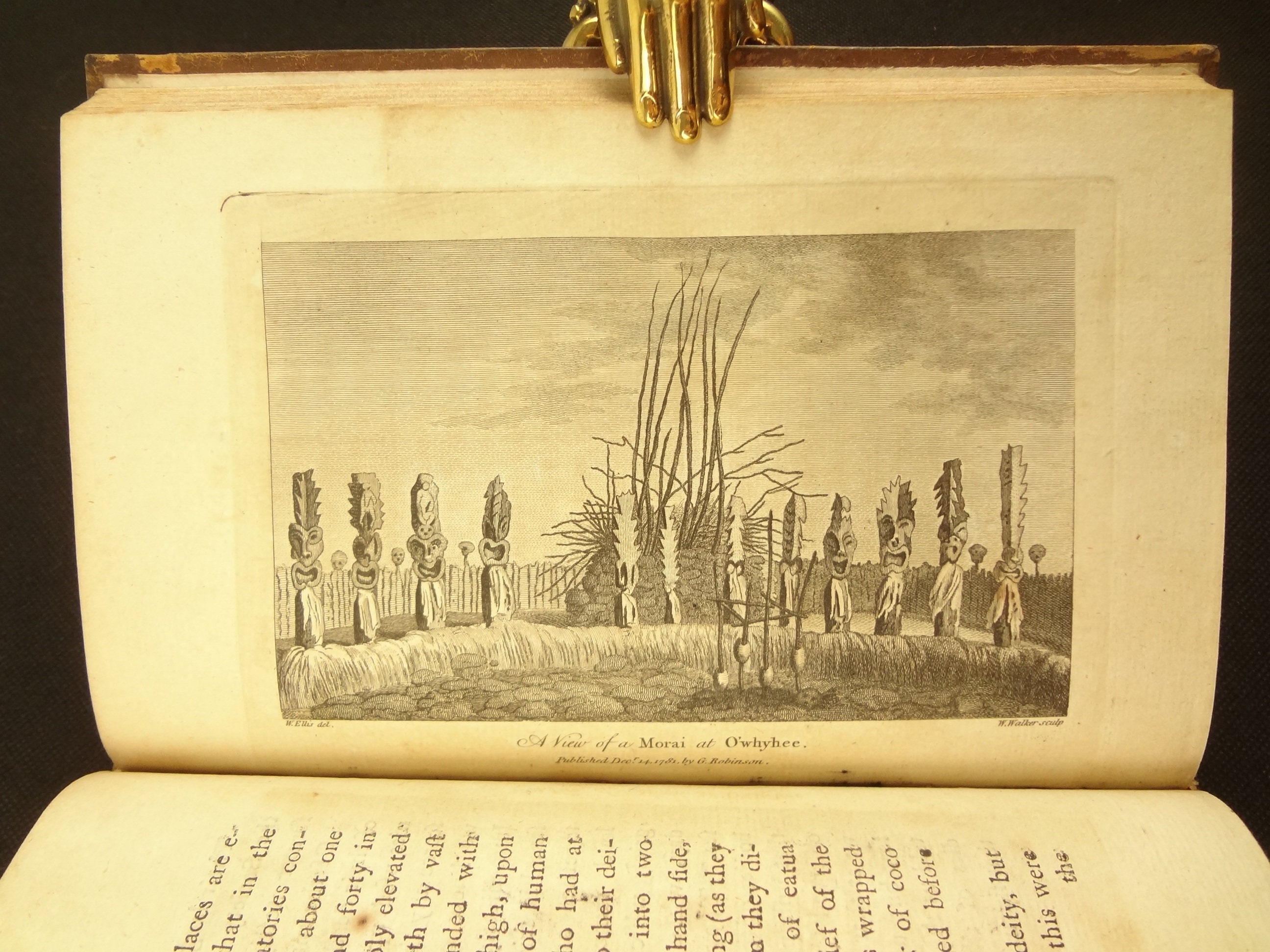 Complete with all 21 plates, and the map, a handsome copy of Ellis' recounting of Cook's last voyage; includes wonderful plates depicting Hawaii (among others). Second edition.

Full title: 1783 An Authentic Narrative of a Voyage Performed by Captain Cook and Captain Clerke in his Majesty's Ships Resolution and Discovery, During the Years 1776, 1777, 1778, 1779 and 1780; In Search of a North-west Passage Between the Continents of Asia and America, including A faithful Account of all their Discoveries, and the unfortunate Death of Captain Cook.

James Cook's third and final voyage (12 July 1776 – 4 October 1780) took the route from Plymouth via Cape Town and Tenerife to New Zealand and the Hawaiian Islands, and along the North American coast to the Bering Strait.

Its ostensible purpose was to return Omai, a young man from Raiatea, to his homeland, but the Admiralty used this as a cover for their plan to send Cook on a voyage to discover the Northwest Passage. HMS Resolution, to be commanded by Cook, and HMS Discovery, commanded by Charles Clerke, were prepared for the voyage which started from Plymouth in 1776.

Omai was returned to his homeland and the ships sailed onwards, encountering the Hawaiian Archipelago, before reaching the Pacific coast of North America. The two charted the west coast of the continent and passed through the Bering Strait when they were stopped by ice from sailing either east or west. The vessels returned to the Pacific and called briefly at the Aleutians before retiring towards Hawaii for the winter.

At Kealakekua Bay, a number of quarrels broke out between the Europeans and Hawaiians culminating in Cook's death in a violent exchange on 14 February 1779. The command of the expedition was assumed by Charles Clerke who tried in vain to find the passage before his own death. Under the command of John Gore the crews returned to a subdued welcome in London in October 1780.

As Captain Cook’s official account was prepared (from his journals), the ship’s crew rushed to cash-in on public interest.

“As on the earlier voyages, unofficial accounts written by members of the crew were produced. The first to appear, in 1781, was a narrative based on the journal of John Rickman entitled Journal of Captain Cook's Last Voyage. Heinrich Zimmermann published in 1781 his diary Reise um die Welt mit Capitain Cook. Then in 1782 an account by William Ellis, Surgeon's Mate on the Discovery, was published, followed in 1783 by John Ledyard's A Journal of Captain Cook's Last Voyage published in Connecticut.”

There is some discussion of whether this is an update of Rickman's work, or Ellis' account, since the title page could be interpreted as stating that Ellis prepared the illustrations only.

See pictures. Leather binding worn with edge wear, corner wear, some rubs, a few worm holes at joints, etc.; but they are holding well (not dried out and cracked). Signs of oiling of leather at endpapers (ghosted oil marks of turn-ins). Some cracking along hinges.

Surprisingly devoid of any endpaper annotations (perhaps it hasn't been passed around much). Some toning and light foxing to paper throughout. Occasional darker spot, thumb, dog-eared corner. Deckled bottom edge H4 (good margins). Folding map with 2" tear at gutter/fold; some creasing along gutter edge. V1, quire S to X with more toning than other printed leaves.

Light moisture mark top margin of volume 2, intermittent. Some ink lighter and darker in volume 2, with occasional stain; somewhat careless printing. Map and all plates accounted for and in their correct position (per the directions for placing the cuts).

A handsome and complete copy; I'll be sorry to see it leave my shop.