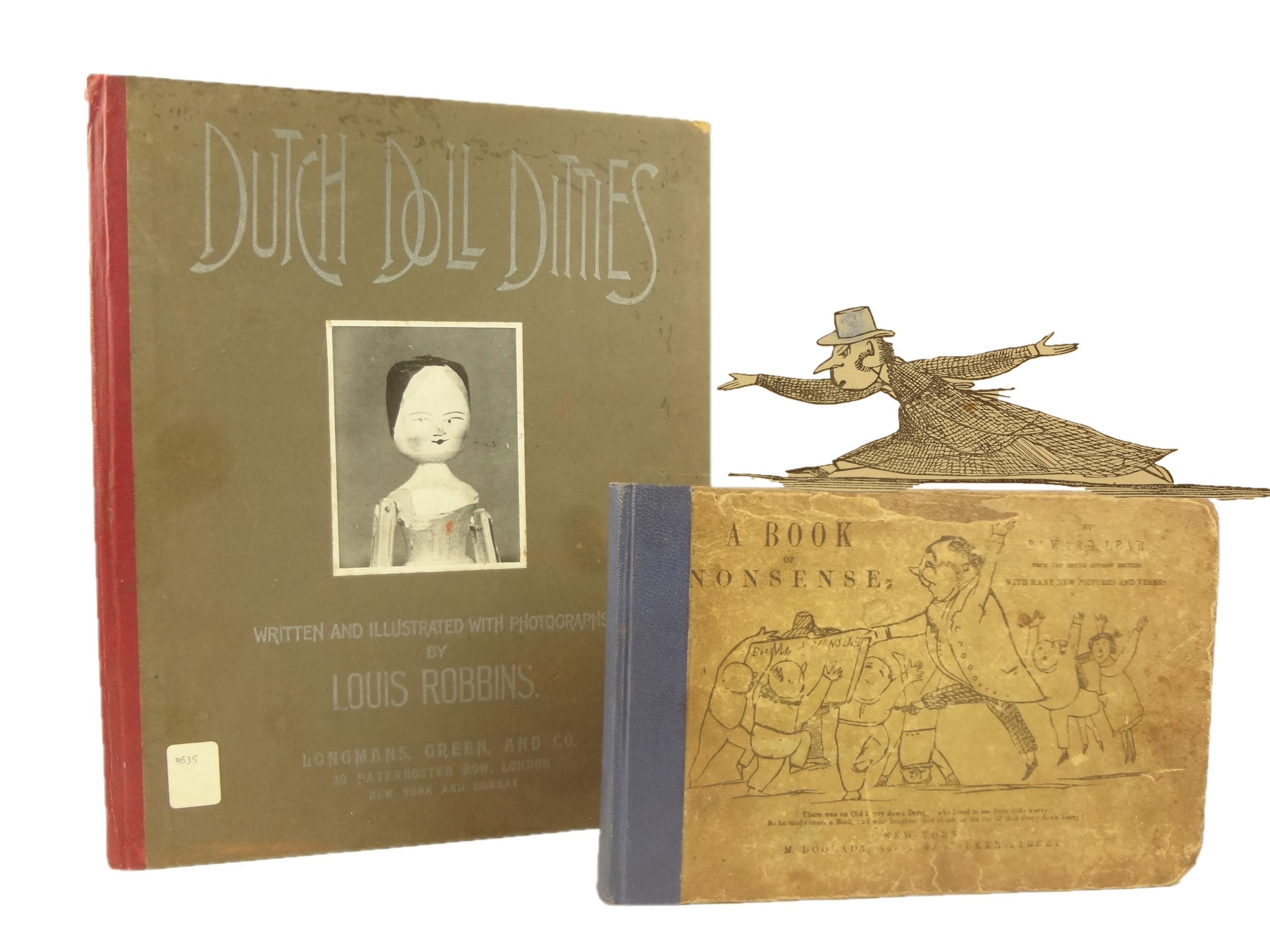 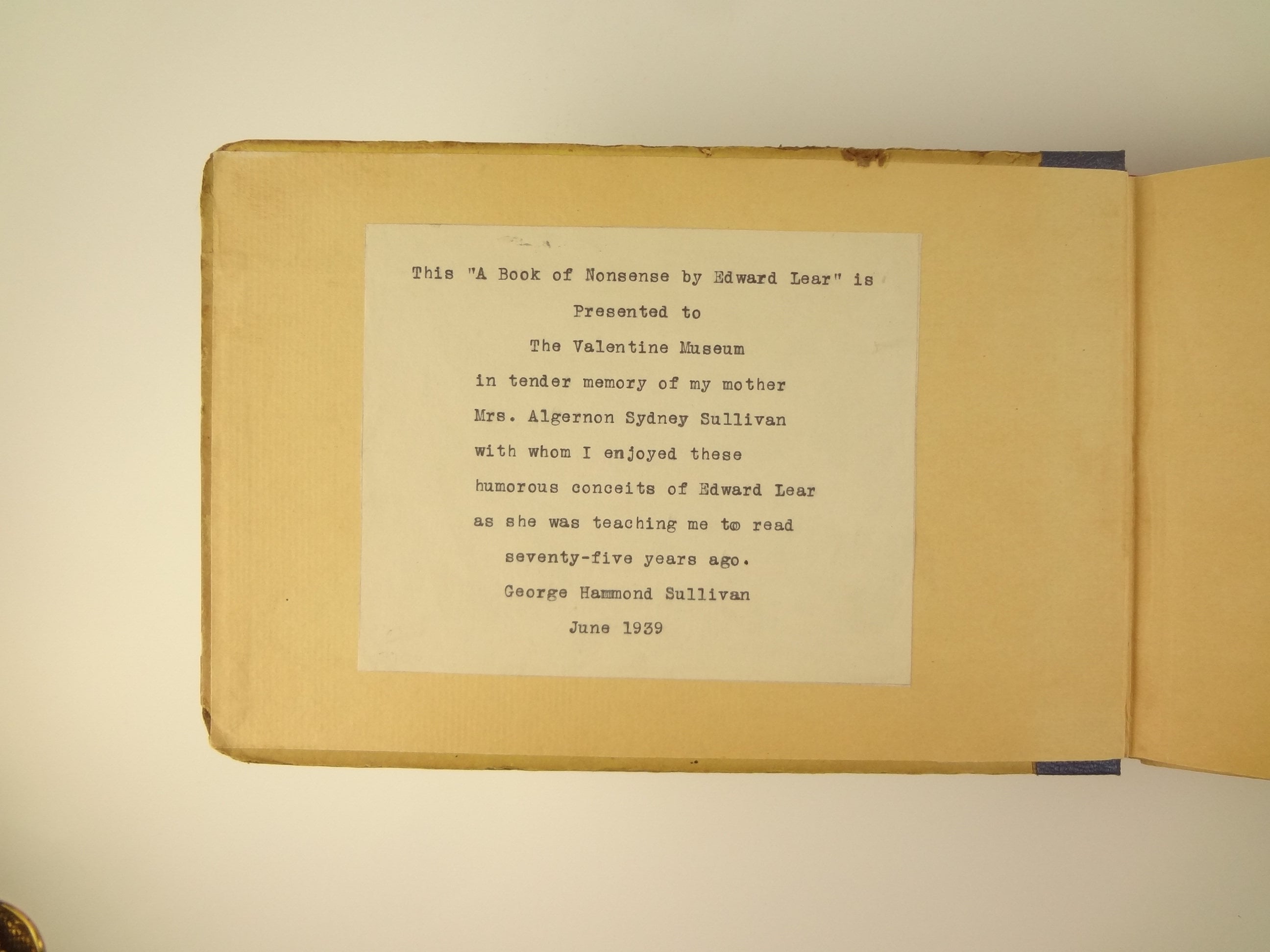 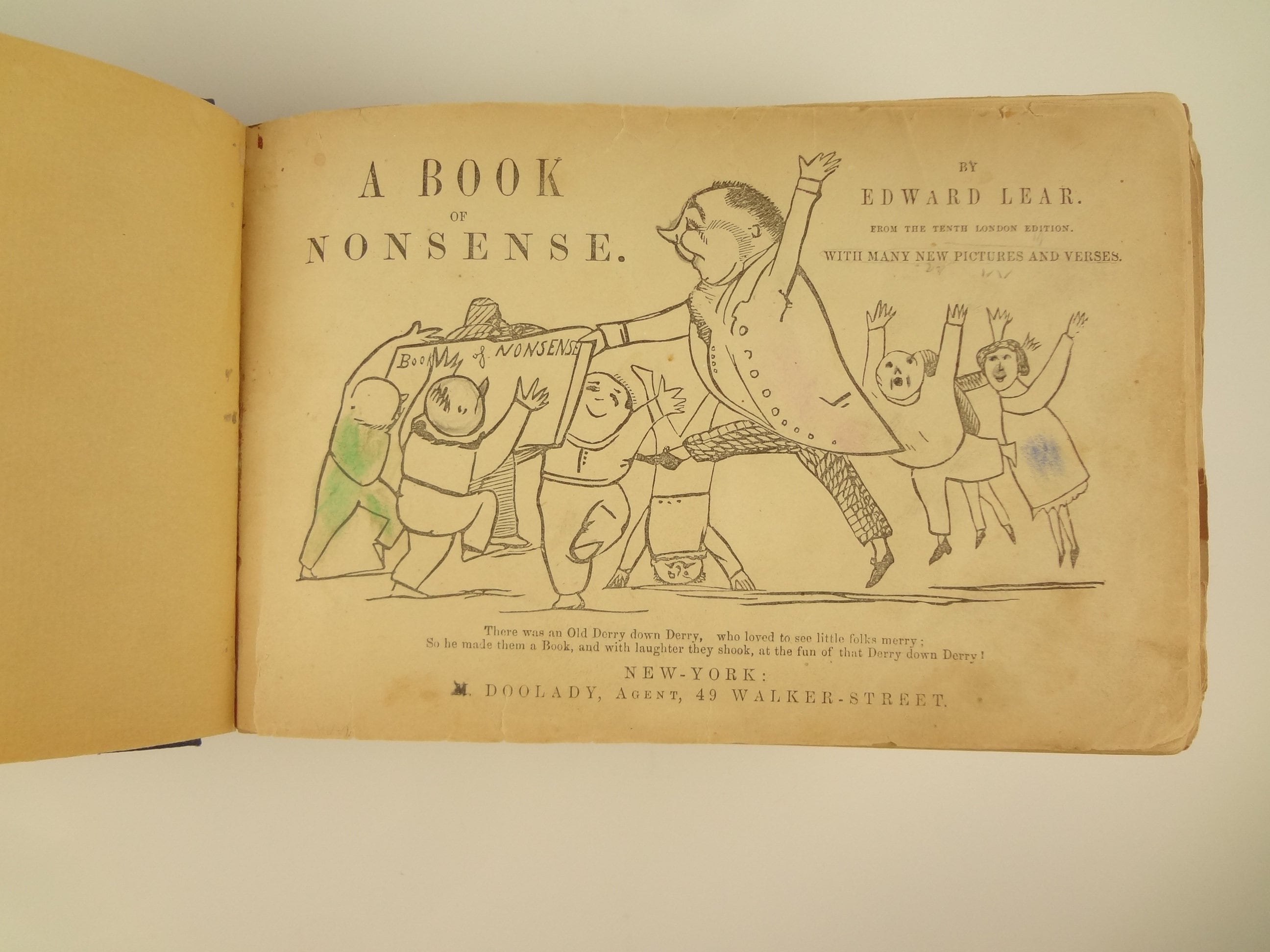 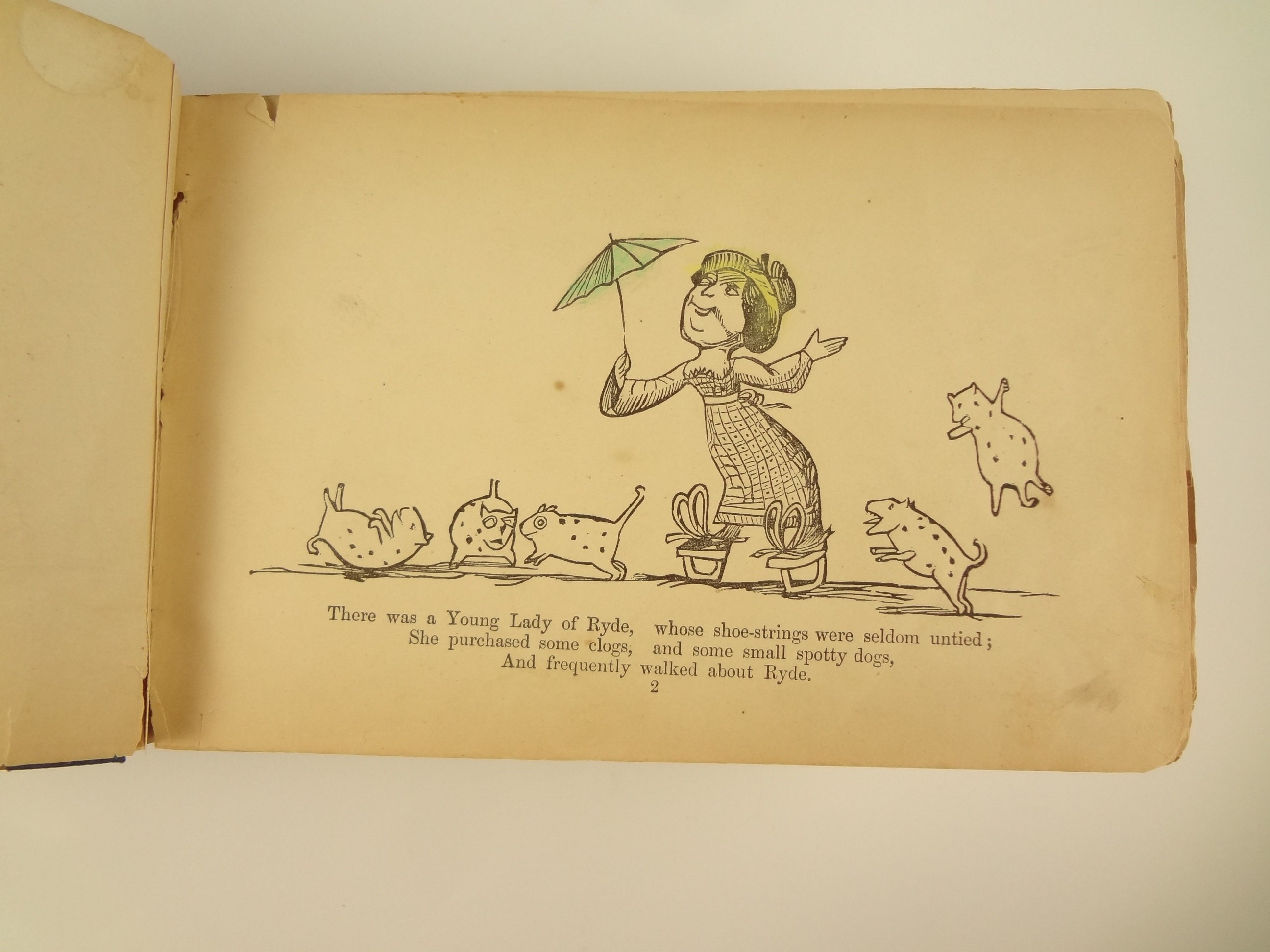 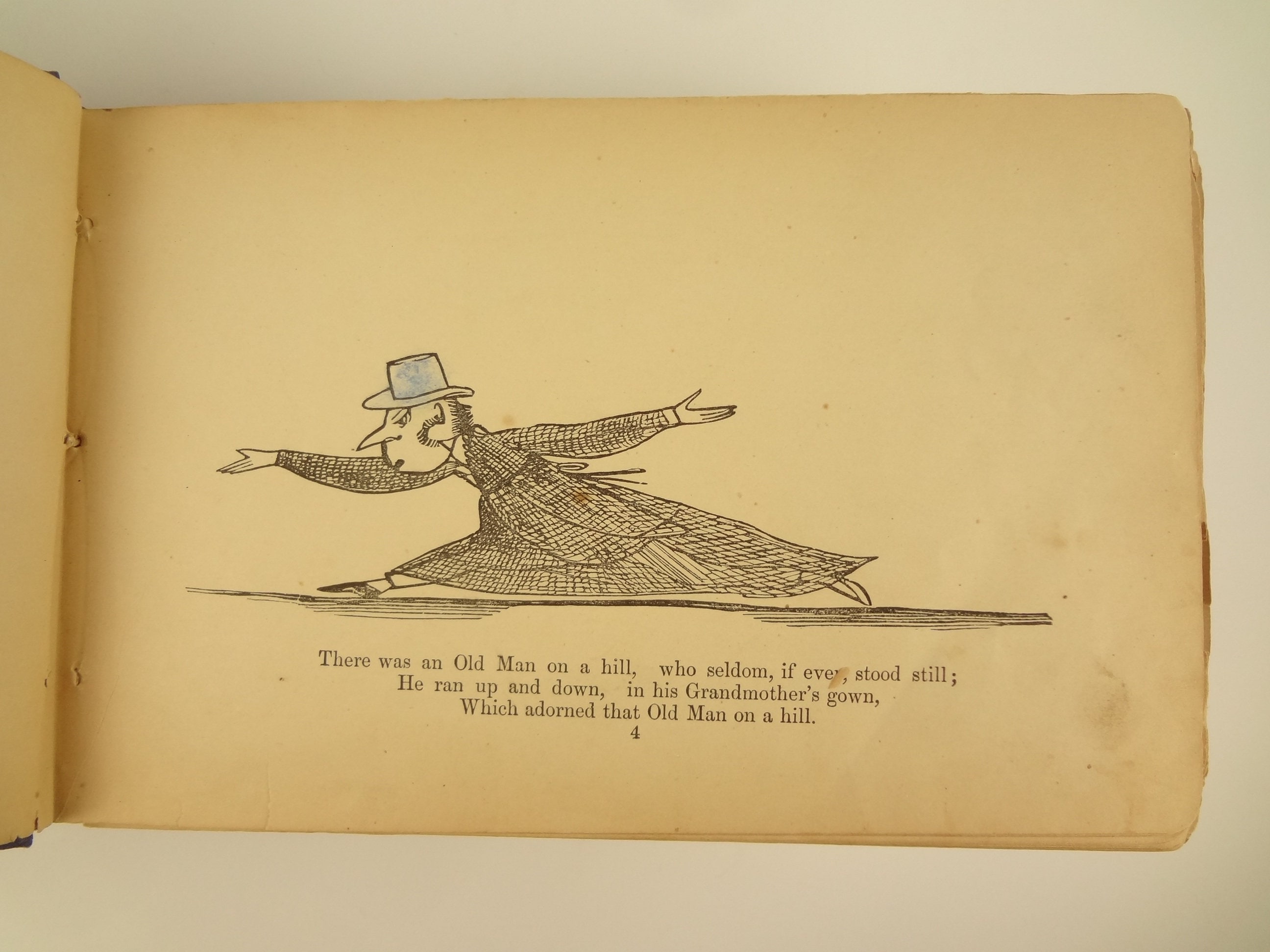 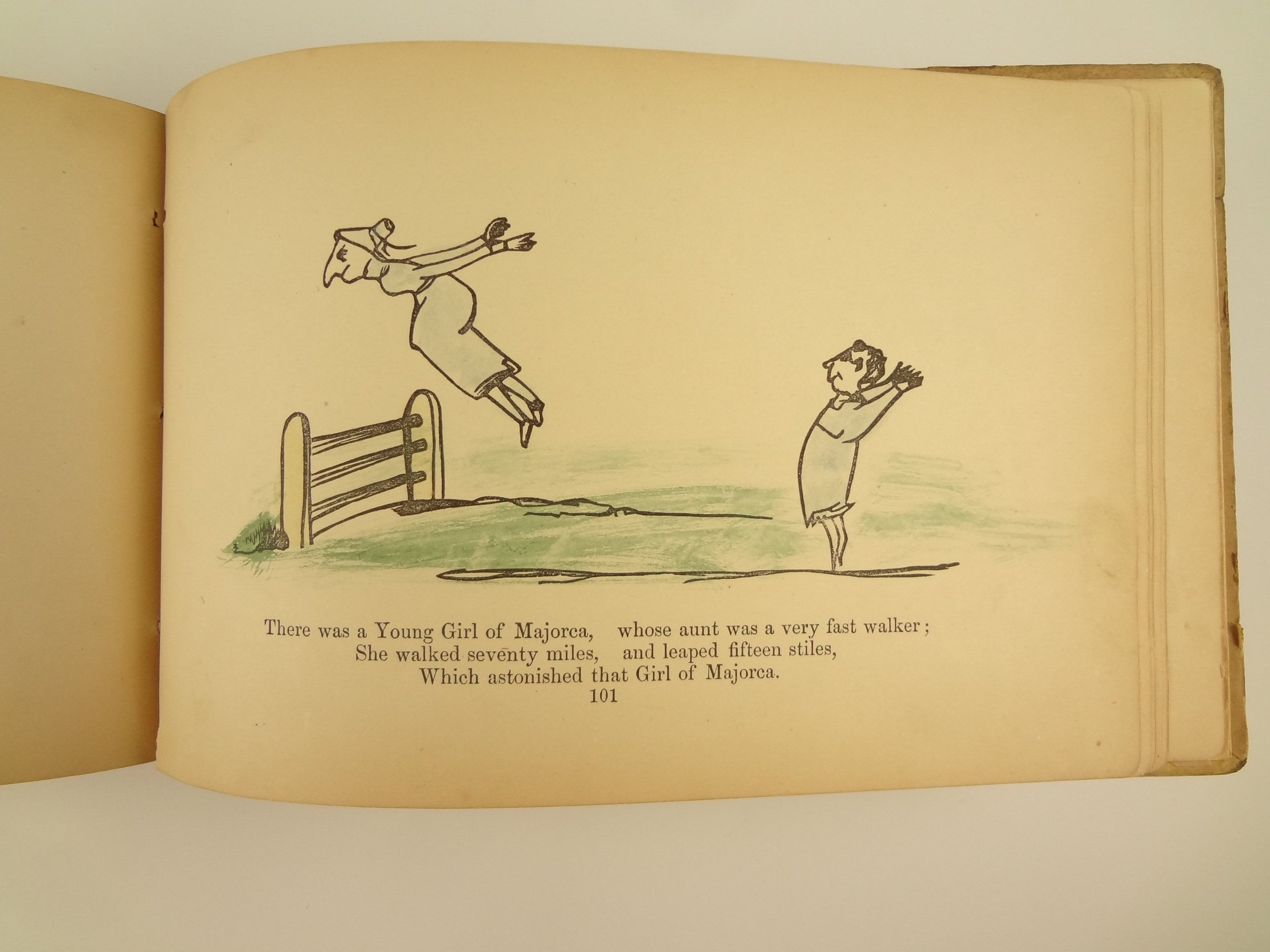 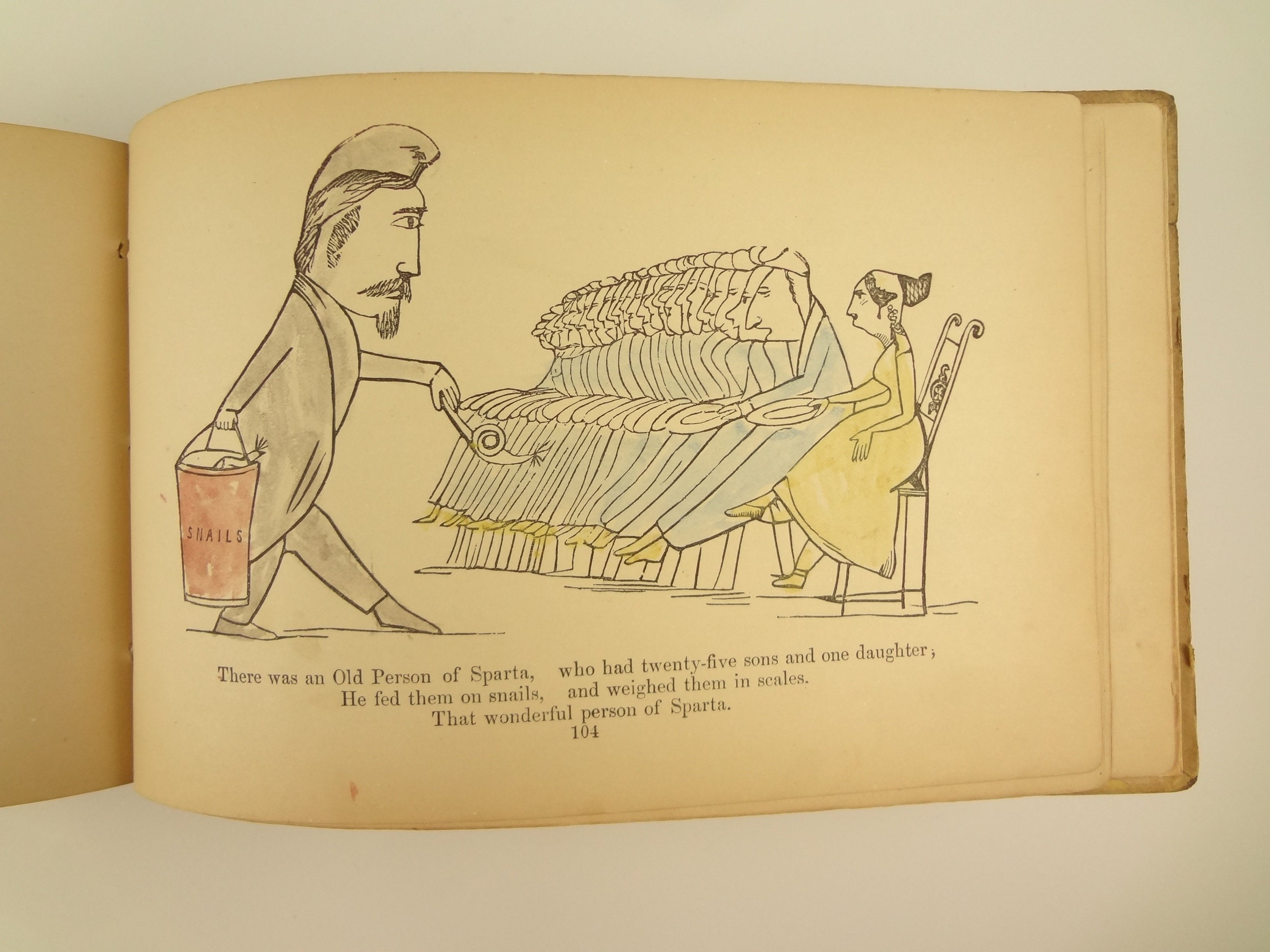 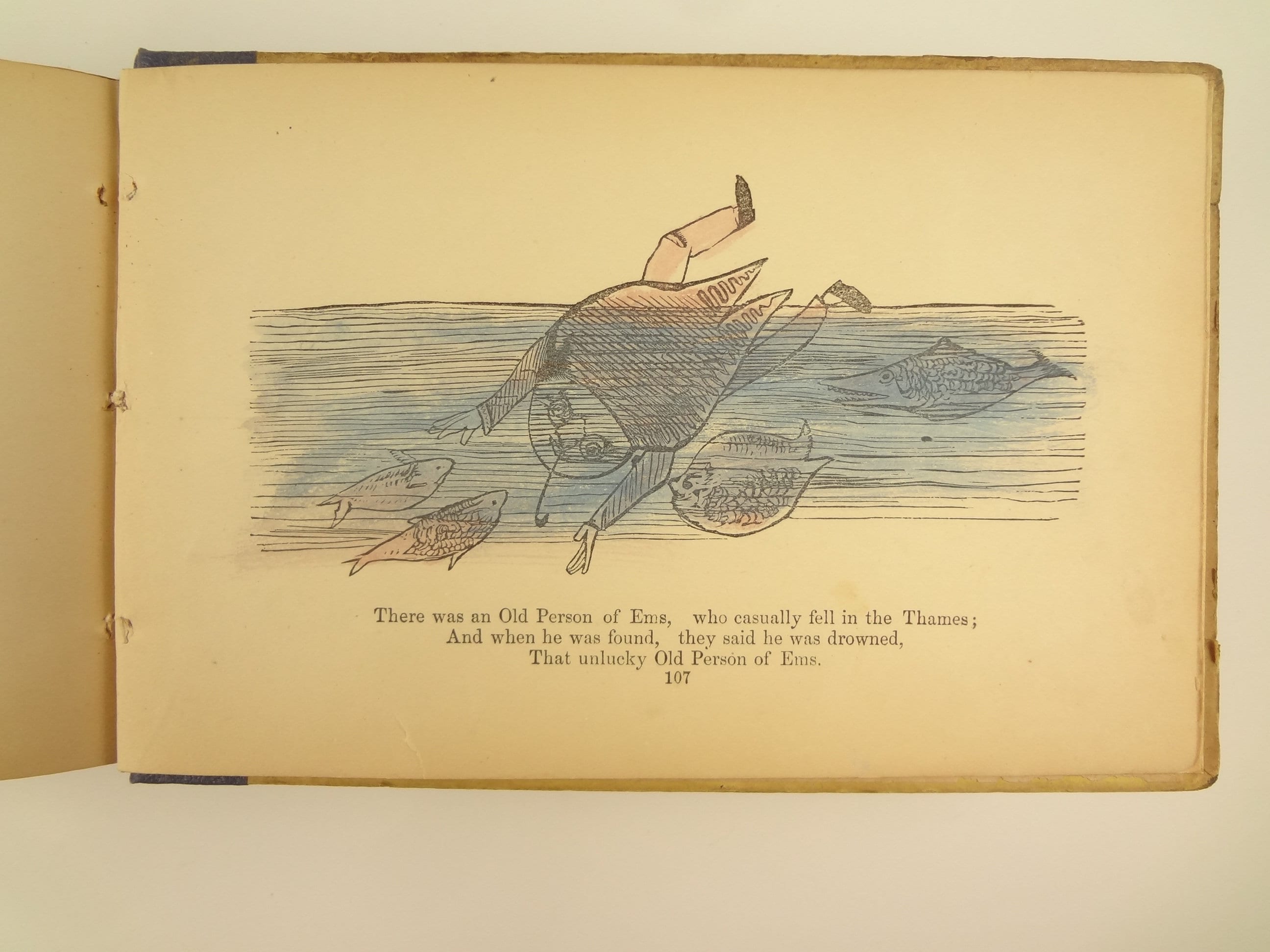 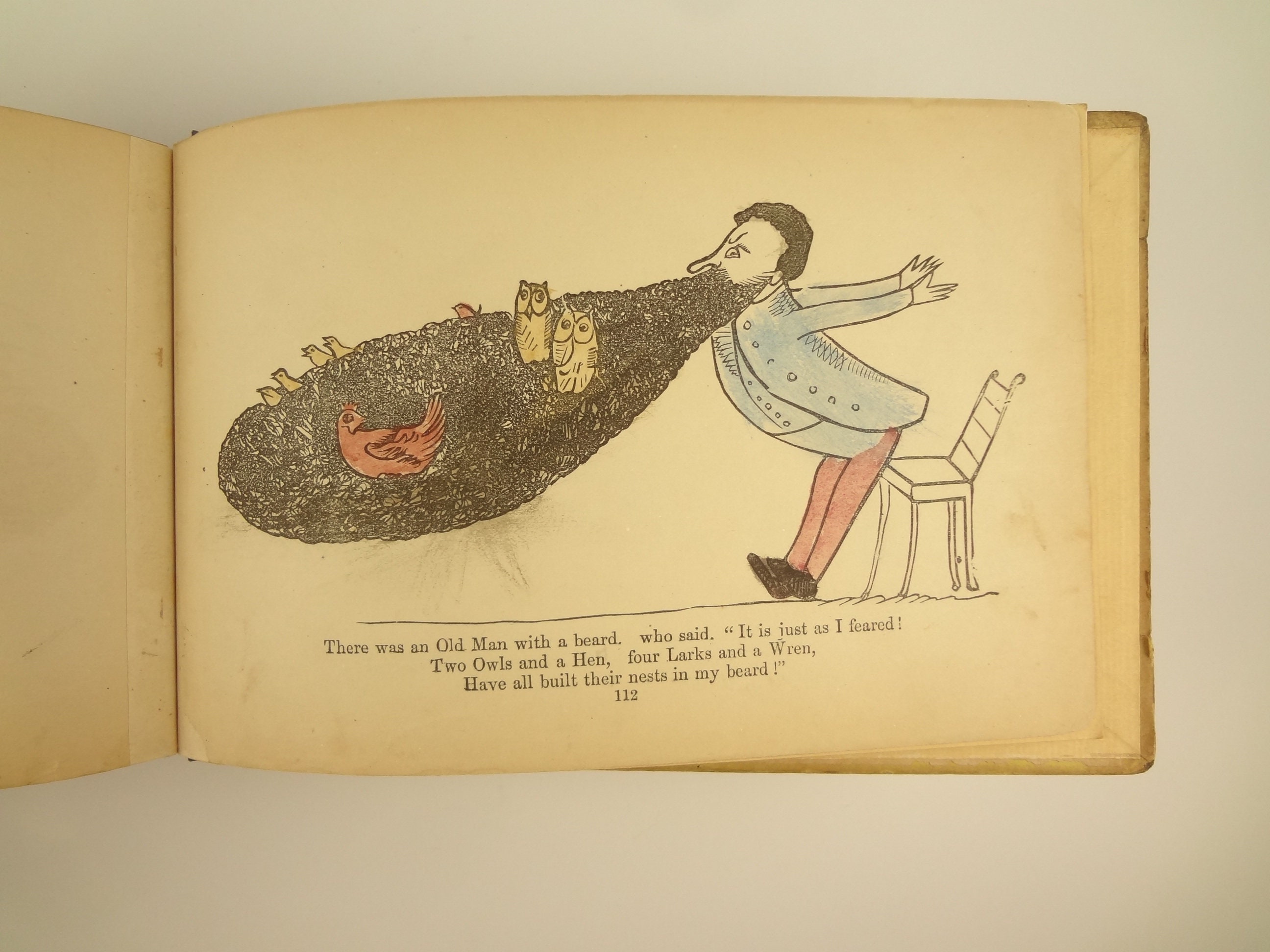 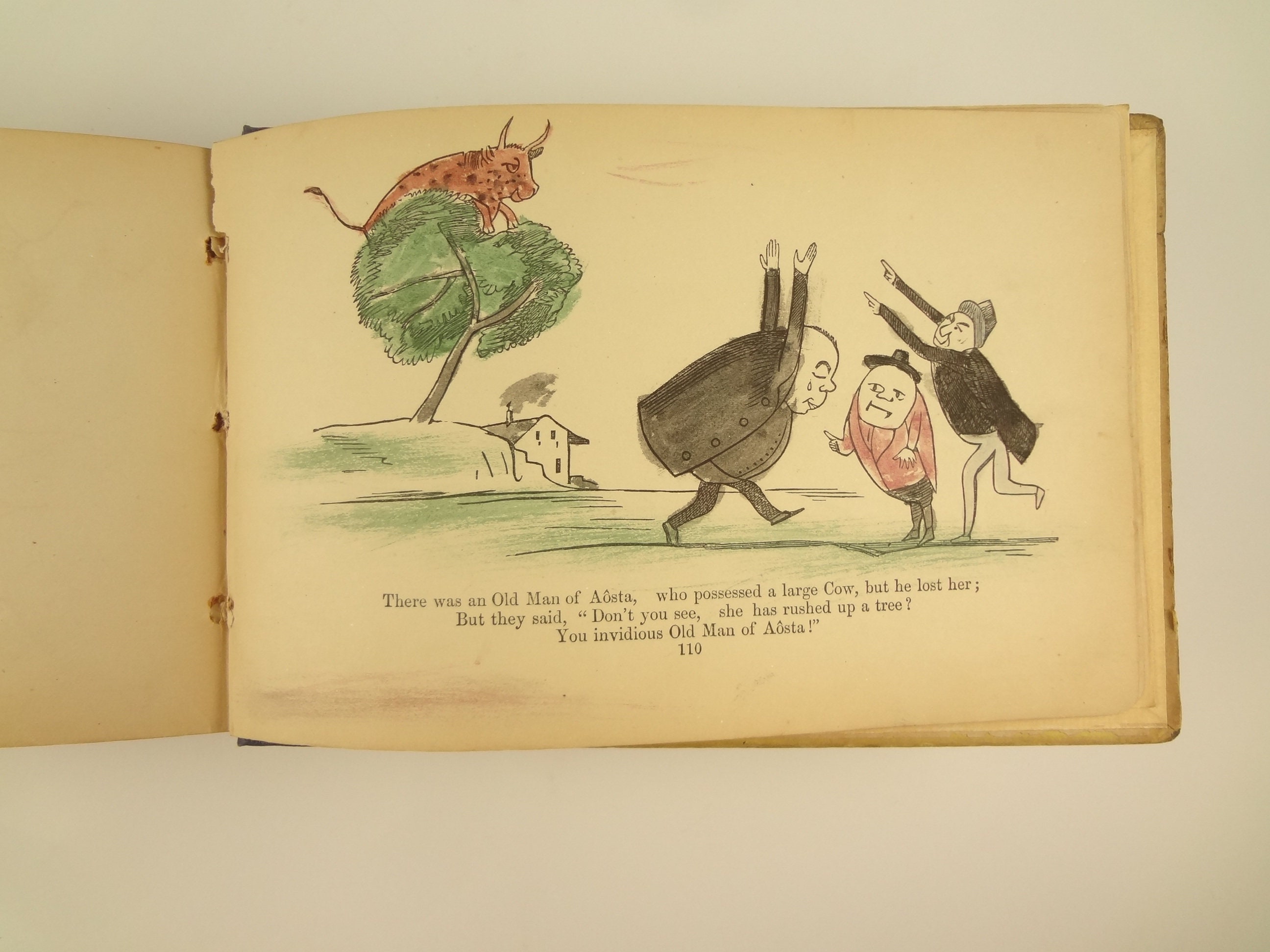 The 1st American edition of Edward Lear's Book of Nonsense, printed in 1863, this copy from a rare subset of "cancel" title pages issued by M. Doolady of New York. Also, this copy with an endearing interesting (and dateable) provenance, placing the book in the hands of a child during the Civil War.

Today we remember Lear for his nonsense poems. In his earlier career he was best known as a professional artist whose specialism was bird and animal portraits. While working as an artist, Lear began writing these limericks to amuse the children of a family he was staying with. The limericks reflect Lear’s fondness for nonsense. Although the poem3s have no clear meaning, they are quirky and fun. His sketches for each limerick feel spontaneous, but they are also rich in character.

This is the first American edition of Lear's Nonsense, printed in Philadelphia by Hazard; a subset of this printing were issued with a "cancel" (replaced) title page stating "M. Doolady" as publisher, as this copy exhibits. The Hazard printing is based on the 10th British edition; Lear's name only first appearing on the 1861 British Christmas edition.

The 1863 printing is notable for coming at the height of the Civil War. Shortly thereafter several war-themed limerick books were issued, with the obvious influence of Lear.

Endearing plate at rear of front cover states - "This "A Book of Nonsense by Edward Lear' is presented to The Valentine Museum in tender memory of my mother Mrs. Algernon Sydney Sullivan with whom I enjoyed these humorous conceits of Edward Lear as she was teaching me to read seventy-five years ago. Geoge Hammond Sullivan June 1939"

Mr. Sullivan identifies his reading of this book in 1864.

“In May, 1857, Algernon Sydney Sullivan and his wife, Mary Mildred, moved from Cincinnati, Ohio, to New York City and to make a fresh start in life. He was 31 and she was 21. They had been married just a year and a half. They had very little money, since he had lost almost all his savings in the recession--then called a panic--that swept over the country the year before. They had virtually no friends or other connections in their new community. The Sullivans spent the rest of their lives in New York. Algernon Sydney became a highly successful lawyer and a much-respected public citizen. He founded the law firm Sullivan and Cromwell, still pre-eminent today. Mary Mildred became a leader in New York society, renowned for her many charitable activities. Although their endeavors helped them establish a lasting home in New York, both had their roots in the South, particularly in Virginia, and they always remained faithful to their Southern heritage. Their son, George Hammond Sullivan, also shared their affection for the South, and he became responsible for keeping their memories alive.”

In his 1907 work, Lincoln in the Telegraph Office, Homer Bates writes "“There was popular, many years ago, a pictorial book of nonsense to which Lincoln once referred in my presence. He said he had seen such a book, and recited from it this rime as illustrating his idea that the best method of allaying anger was to adopt a conciliatory attitude. The picture shown, he said, was that of a maiden seated on a stile smiling at an angry cow near-by in the field, and saying: ‘I will sit on this stile / And continue to smile, / Which may soften the heart of that cow”.

The above referenced limerick is from Lear's Nonsense work.

Measures approx. 22.5 x 15 x 2.5 cm, oblong octavo. Hardcover, with a limerick printed on the front and rear board (rear board limerick continues numbering of internal, as 113). Respined. Many gatherings loose. Illustrated. 112 numbered pages (title page as "1", although number not printed).

See pictures. Respined, but many gatherings within loose. Boards heavily worn, chipped at edges, rubbed, etc. Ex library copy with all associated stamps, shelf numbers, etc. Rear of front board with a dedicatory inscription explaining the situation/provenance of this copy. Pages are toned throughout. All pages present. Many pages with a page edge chip and a little coloring. One page with "X" written on the verso (rear). Occasional dog-eared page. Two small holes at gutter margin make me think it was once stab bound to hold it together. Needs to be rebound but it is complete, with all the plates and in relatively good condition for a work that would normally be subject to heavy wear and the interest of children.