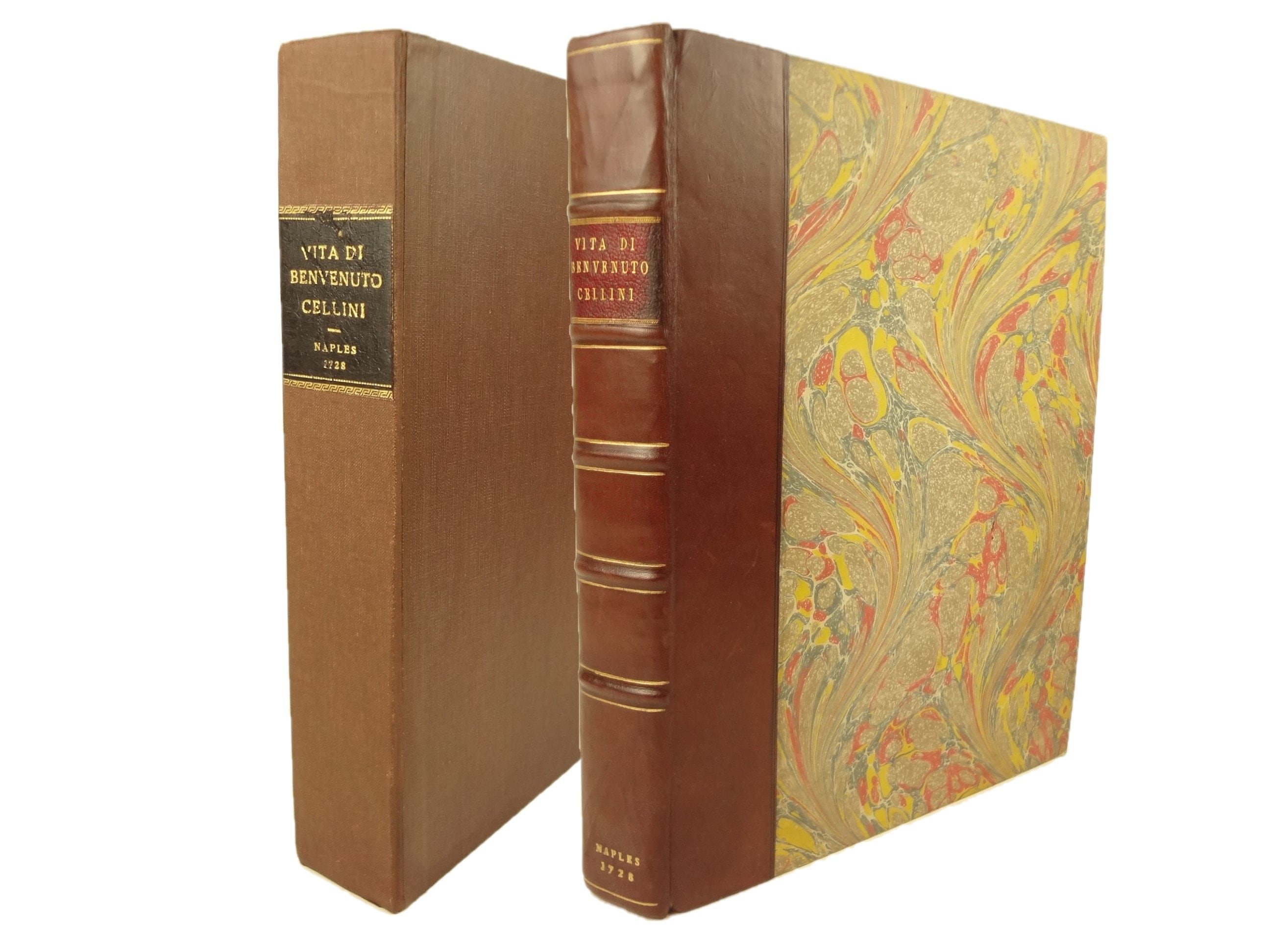 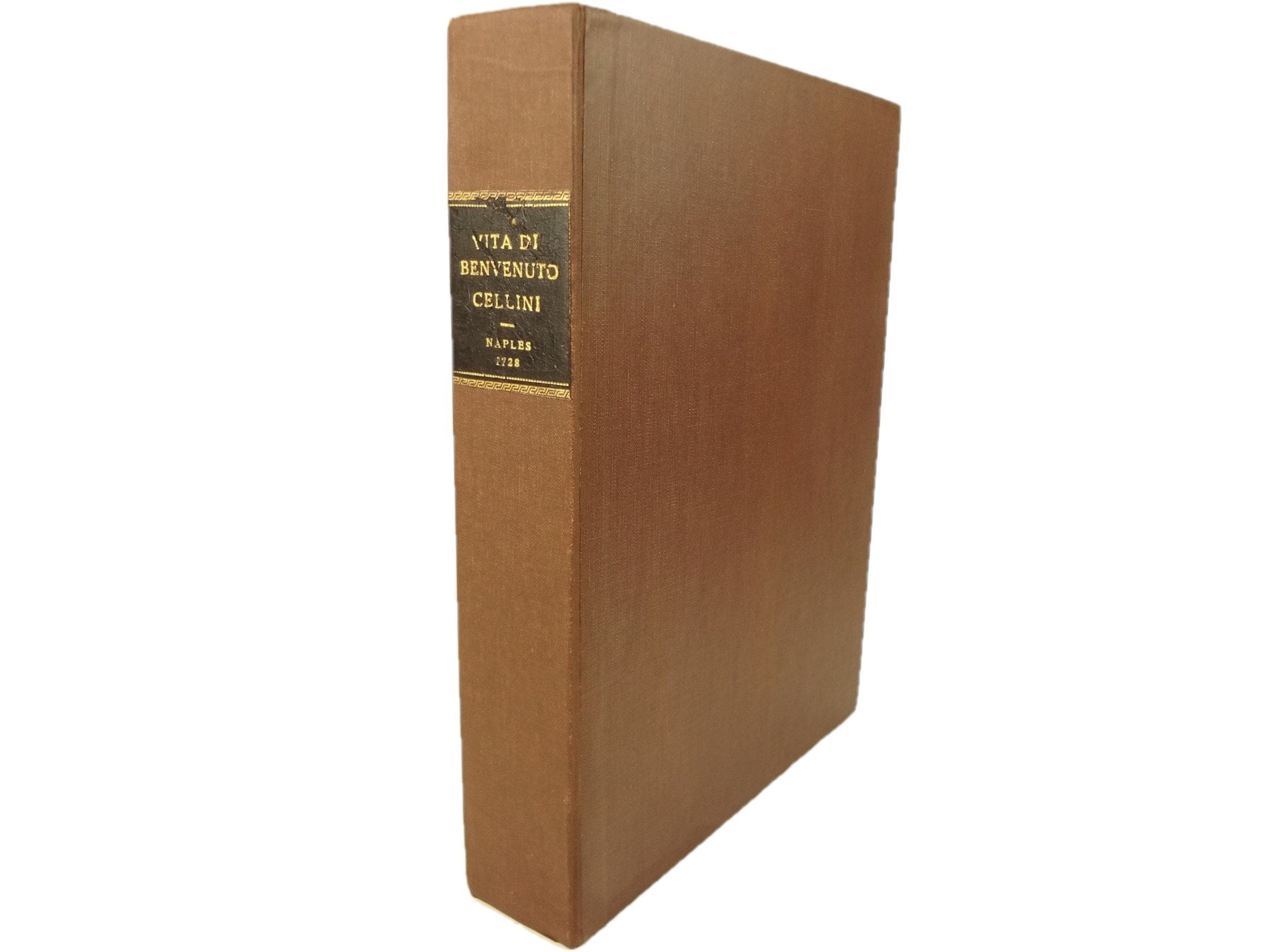 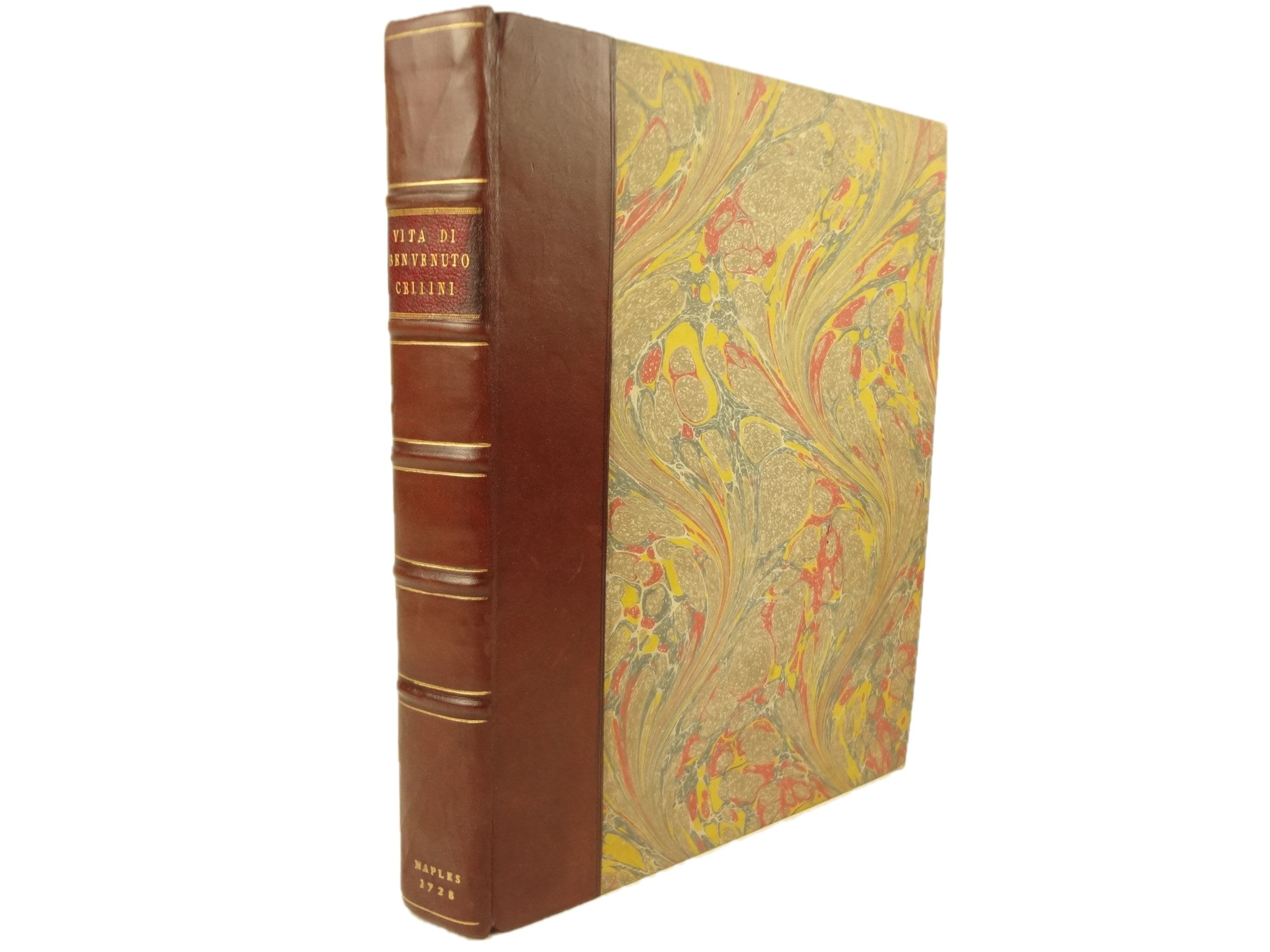 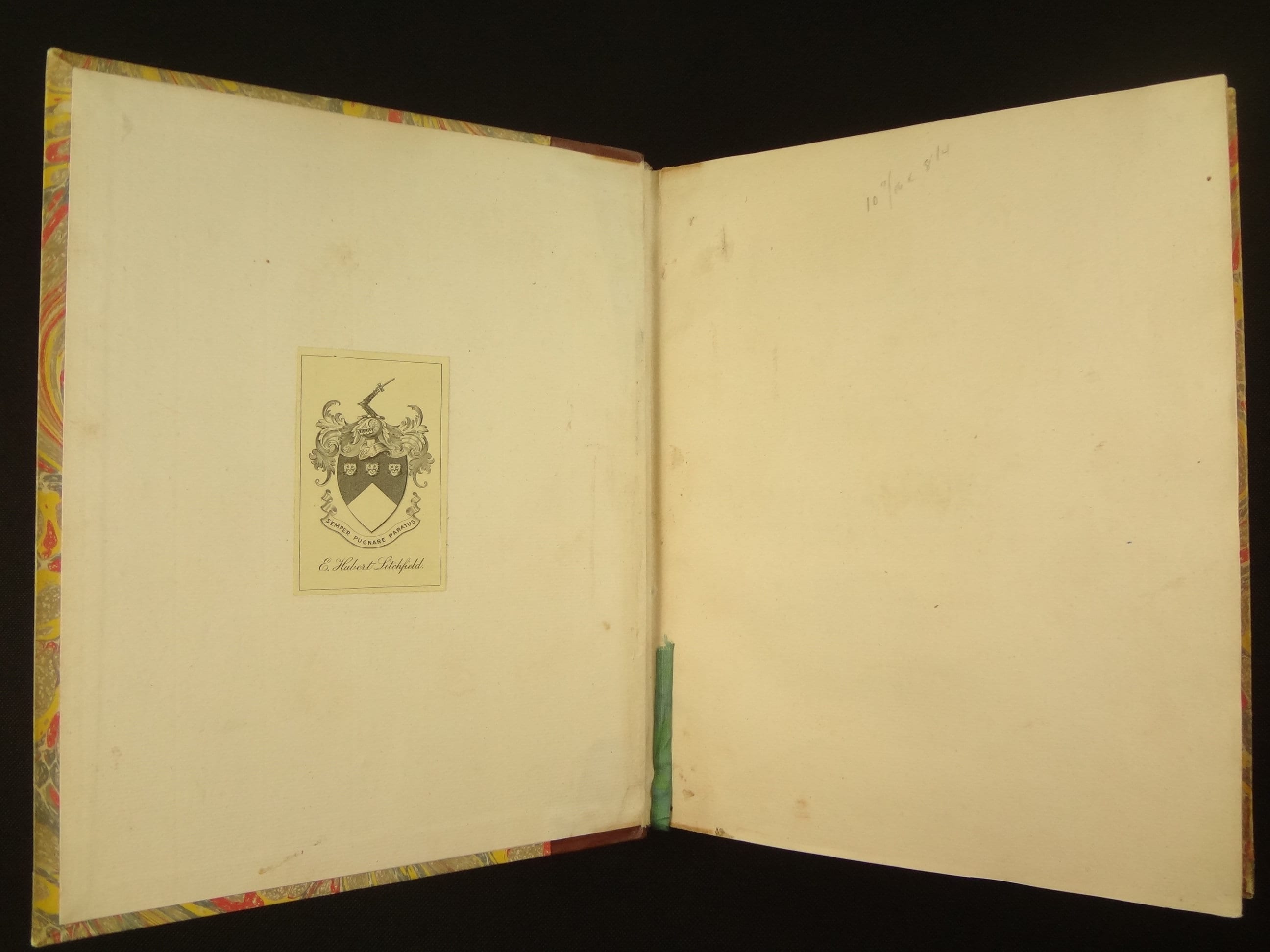 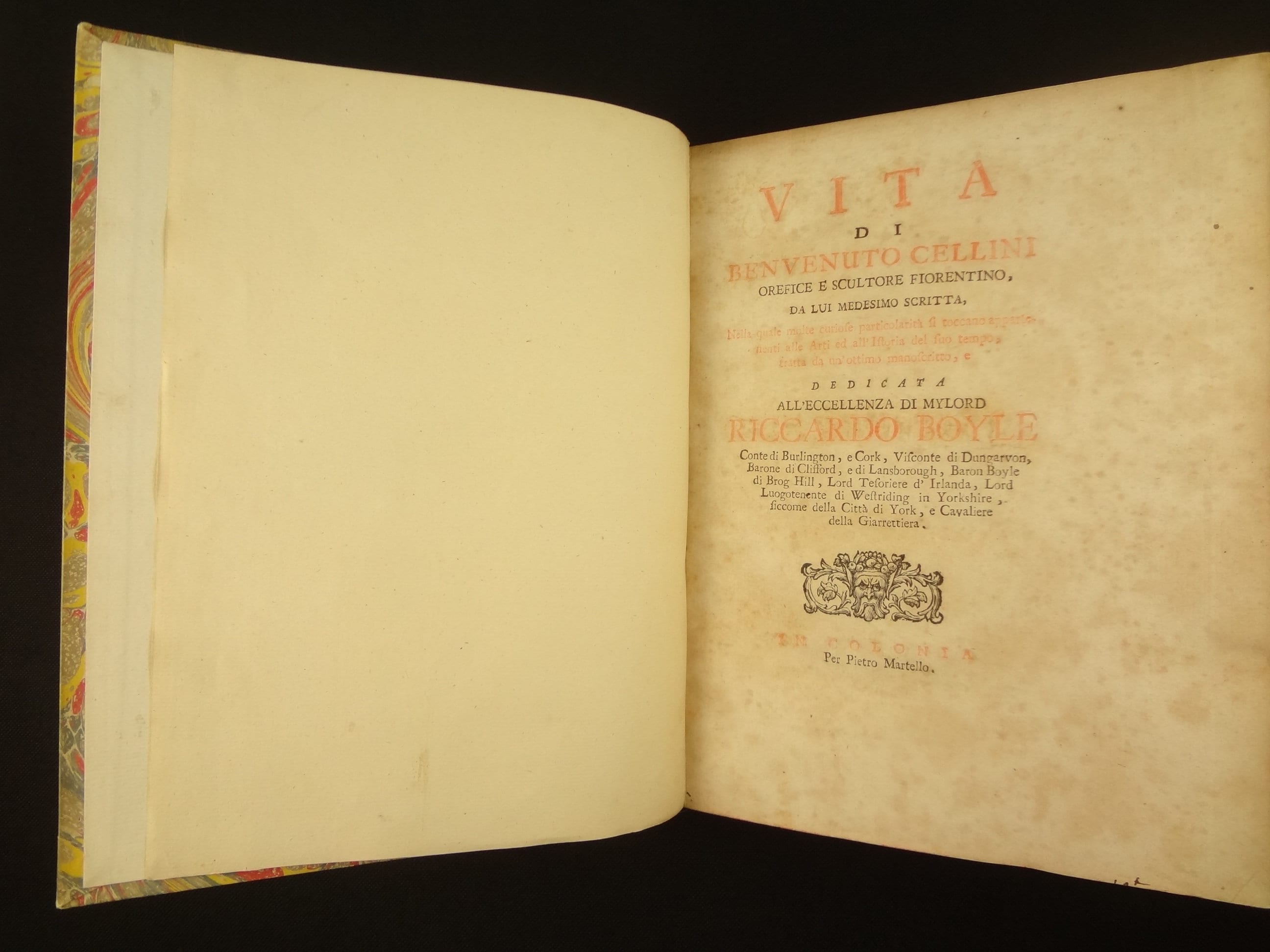 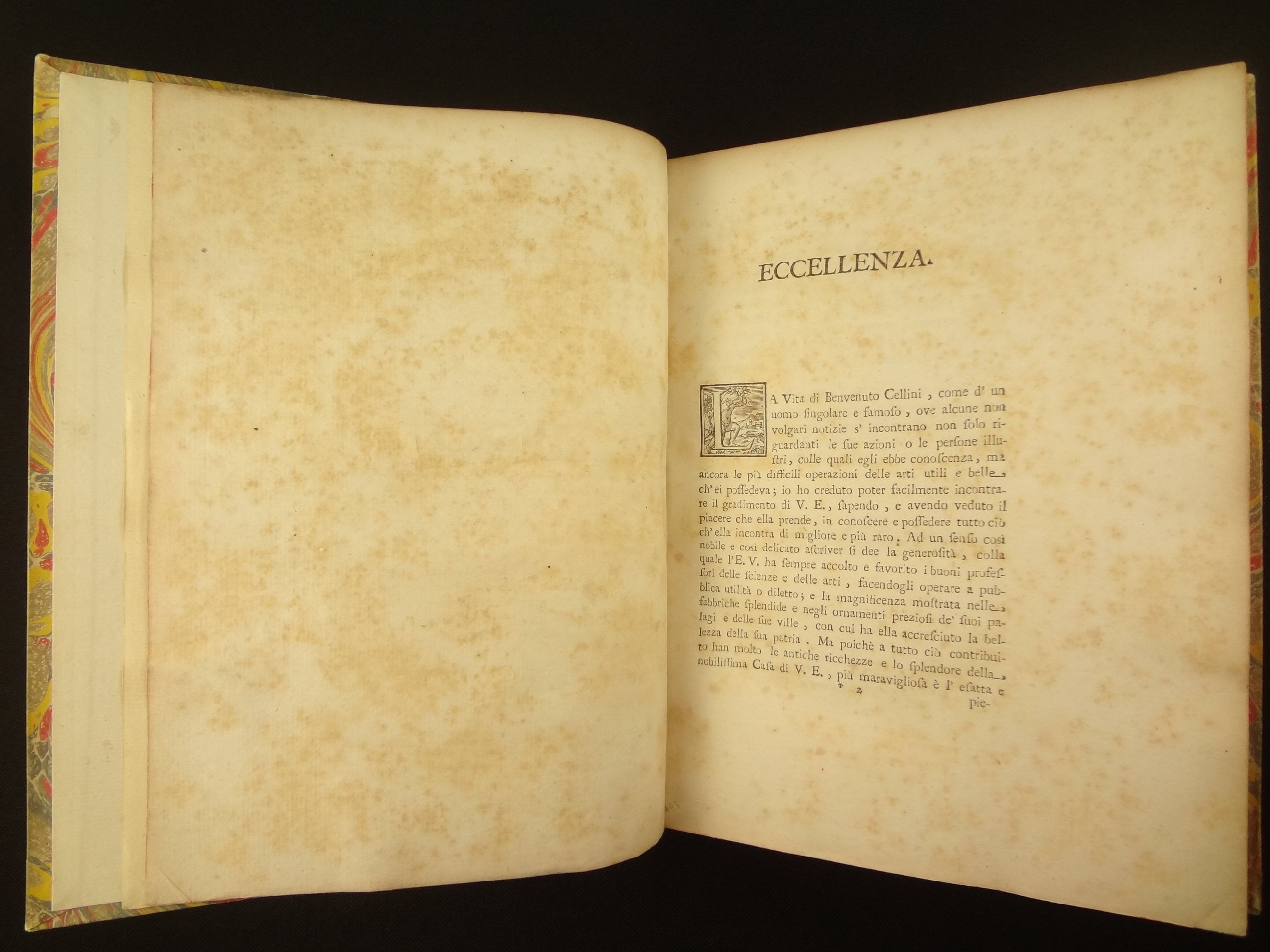 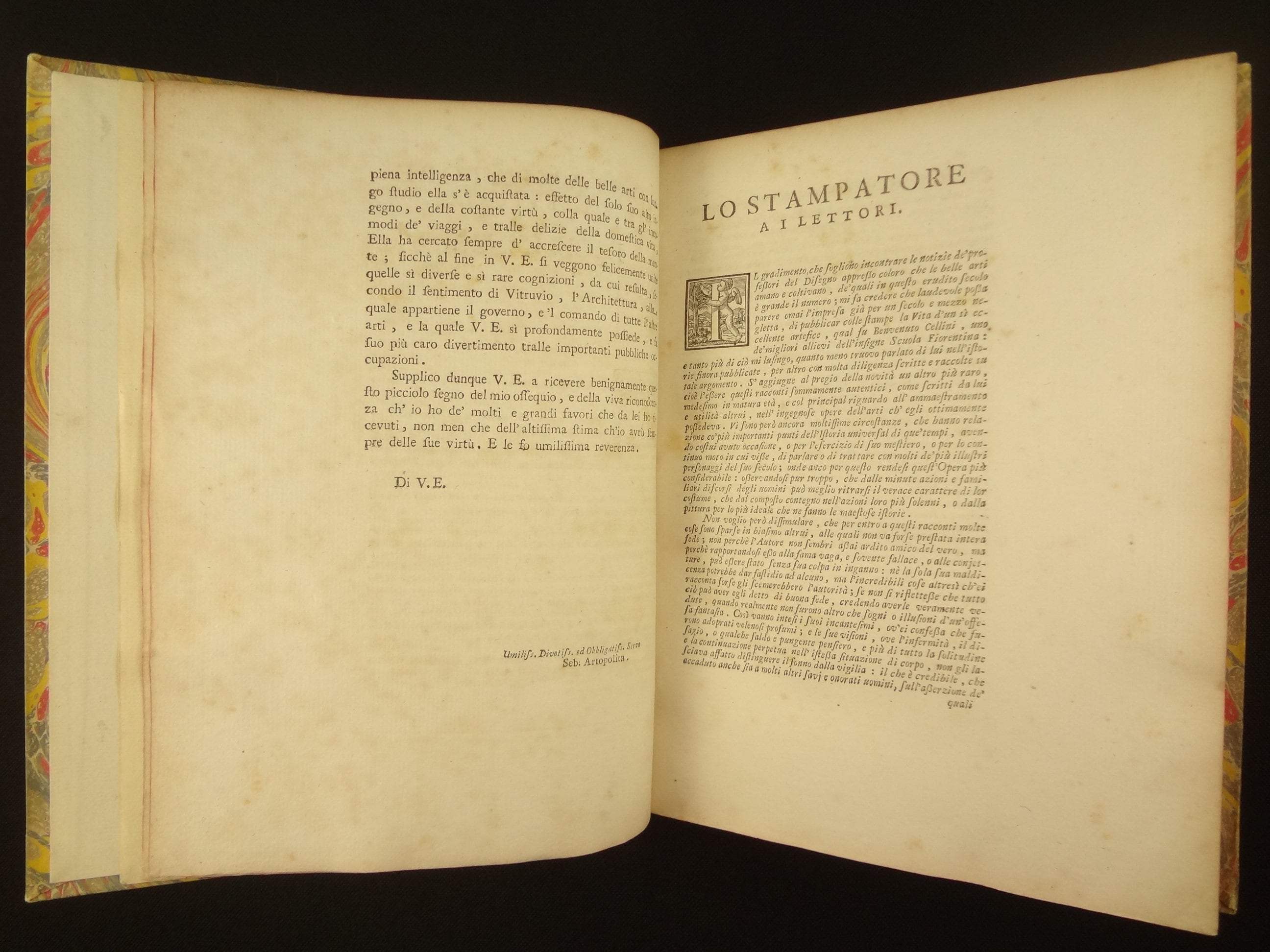 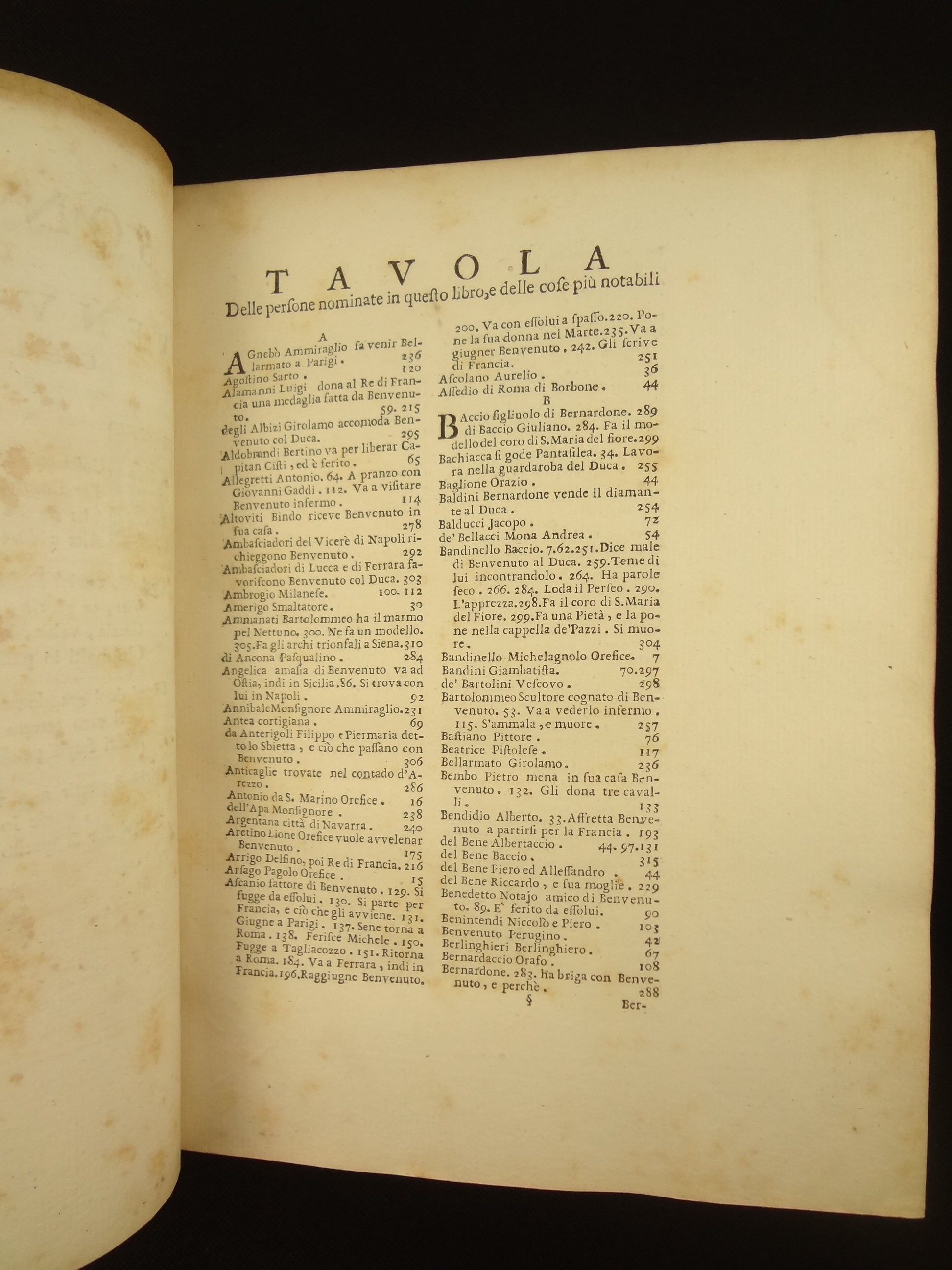 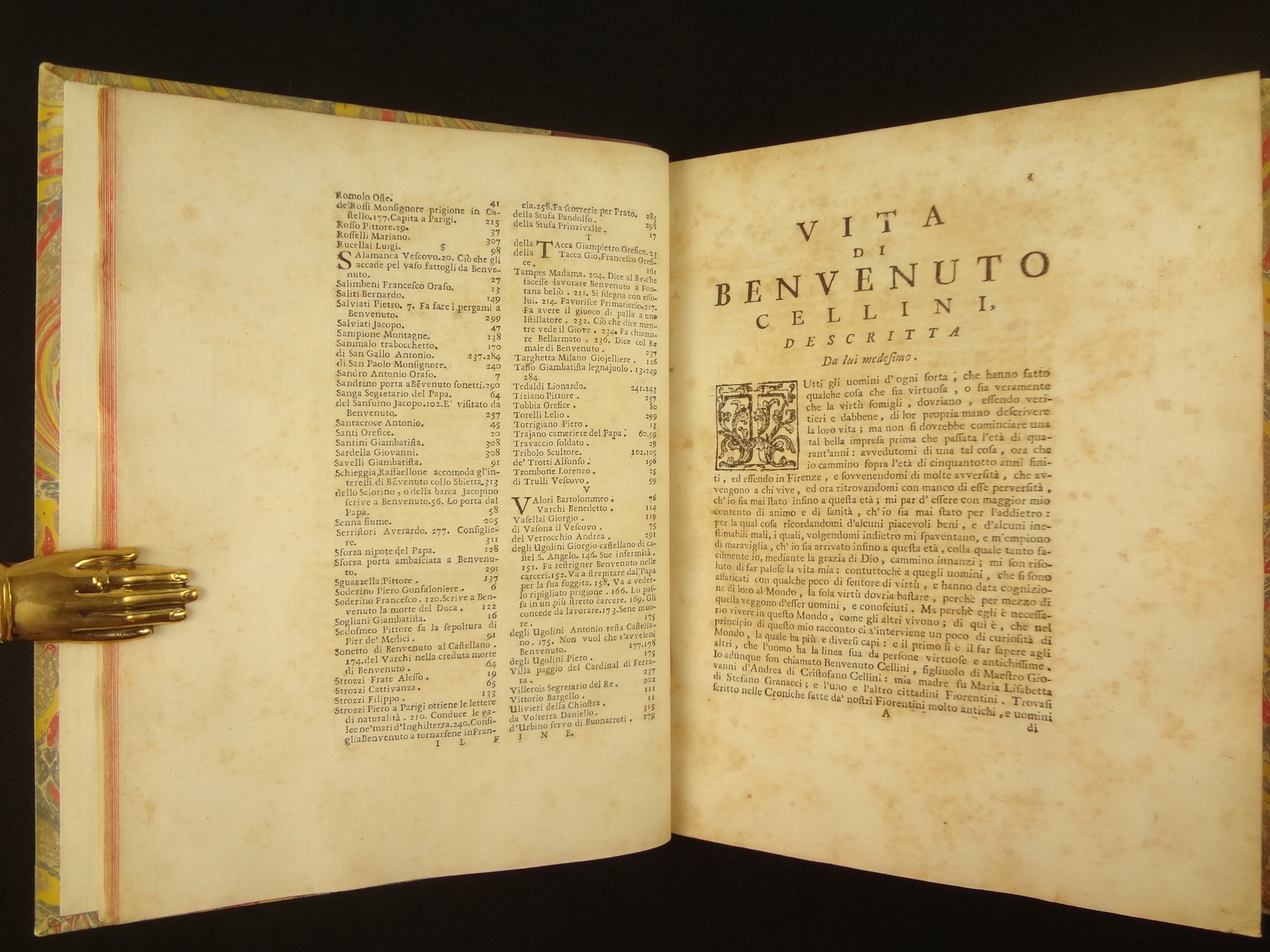 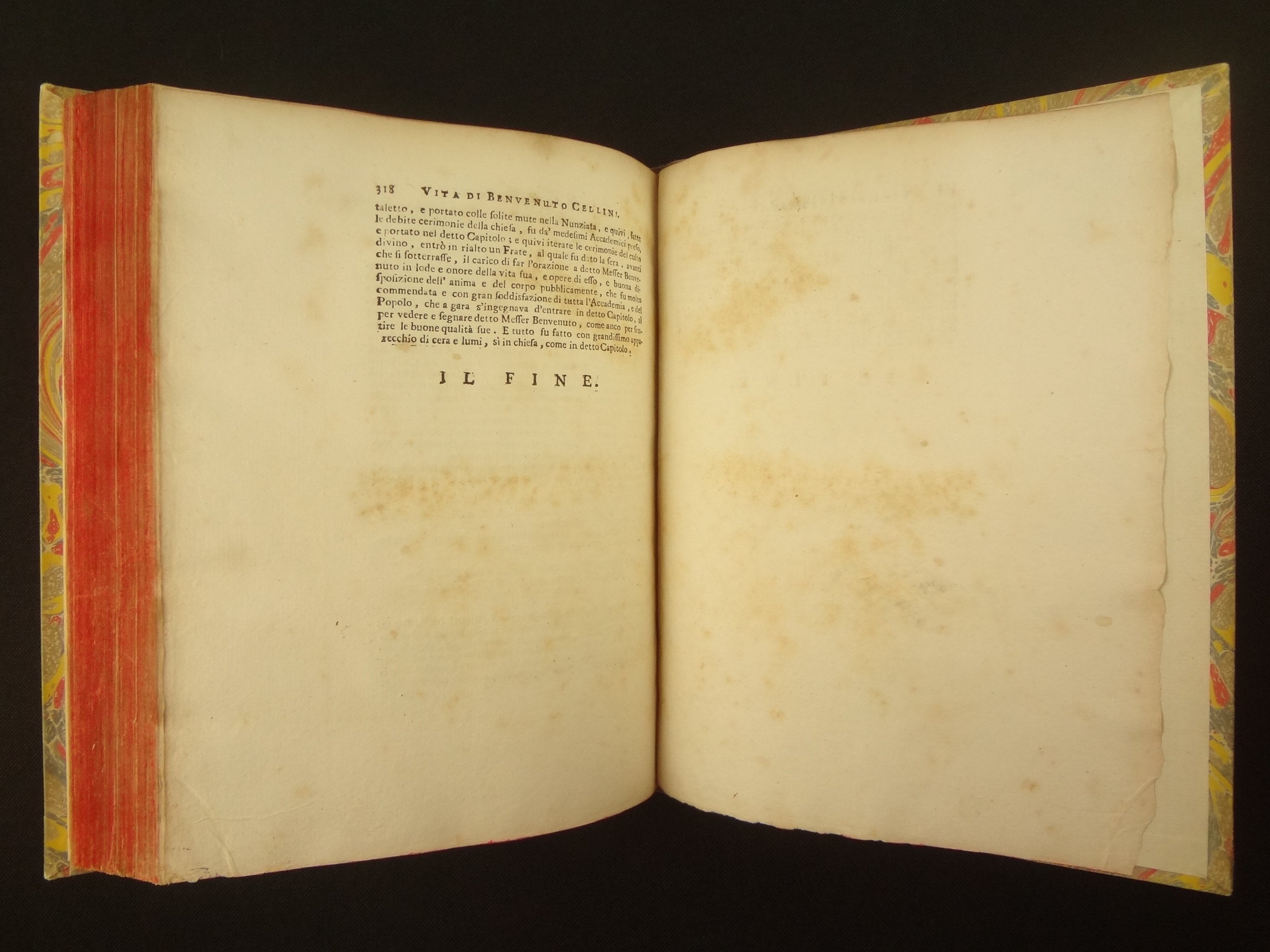 A wide-margined, well-protected 1st edition of (possibly) the most important autobiography of the Renaiisance, 1728 Vita di Benvenuto Cellini.

Benvenuto Cellini was a 16th century Italian goldsmith, sculptor and author. As a sculptor, he is best known for his Perseus with the Head of Medusa. This is his autobiography. Due to the extreme nature of the work, it had been passed around, in manuscript form, for over 100 years before this first printed edition was executed.

Rather than attempt to recreate what has been done before, I'll simply quote several of the many historic reviews that follow the same train of thought:

"Anyone who favours incredible adventures, great dangers, horrible murders, frightening prison houses, ghosts, witchcraft, incantations and everything else that is appealing in the most widely read novels nowadays, can find full satisfaction in this book. However, the book is also attractive to those readers who are willing to hear, from a contemporary and an eye-witness, about the acts and words of famous and infamous persons, and to anyone who is interested in a lively and as it were vivid image of the mental and moral civilization of one of the most interesting periods in history." – C. Van der Post Jr. 1856 flyer for his Dutch printing of the Vita

“This is, perhaps, the most perfect piece of autobiography that ever was written, whether considered with reference to the candour and veracity of the author, the spirit of the incidents, or the breathing vitality of the narrative. It has also the recommendation of having been written at a very interesting period of literary history, and of recording some curious particulars relative to the private character of the great men of the time. That a work, which used such freedom with the names of many persons of high rank and connection, should not be published for some time after the author's death, is not surprising; but, being once laid aside, it remained unpublished until 1730, nearly two centuries after it was written. We never, in the whole course of our life, read a book of a more engaging description…” - The Retrospective Review, Volume 4, p. 333, Baldwyn, 1821

Due to the seditious nature of some of the work, the editor, Antonio Cocchi, was concerned with persecution. He produced a false printer's mark and place of publication. Cocchi also signed his dedication with the fictitious name Seb. Artopolito. There is also some discussion regarding the year it was printed in (some say 1728, others 1730).

The 1792 forgery has a different printer's mark, a different number of lines on the dedication page, page numbering on the index of people, and a change in the typographic layout of the title. You can see a fake 1792 scanned to the internet by the University of Michigan, Openlibrary number - OL25523020M

A number of Worldcat entries, OCLC 1180777092 being a well-documented example. In many of the world's best libraries.

Stored in a clamshell box, with a flap opening at the fore-edge to facilitate easier access (a nice design).

See pictures. Nice clamshell box with a little wear to edges, corner label, etc.; some ghosting of the book within the box. I'd guess a 20th century binding; fairly fresh and clean. Binding with a little wear to edges, corners, and a few ring marks to spine leather. A little darkening to edges of spine label. Bookplate of Litchfield on pastedown. Some marks to white endpaper, and a manuscript measurement, "10 11/16 x 8 1/4".

Title page faded with darkening and foxing, I'd guess it was exposed before rebinding (or washed); manuscript number clipped at bottom edge margin. Wide margins. Some toning and foxing to pages throughout. Some light dog-ear creases. Occasional deckled edges, likely only trimmed once. Several instances of careless printer ink smudges, mostly bottom margin (211, 283, among others). Bibliographic note on rear endpaper, "EHL 1946 1st edition 1st issue XLIHX". Some evidence of tissue repair at rear gutter, but well done and you must look for it. Silk ribbon ok.