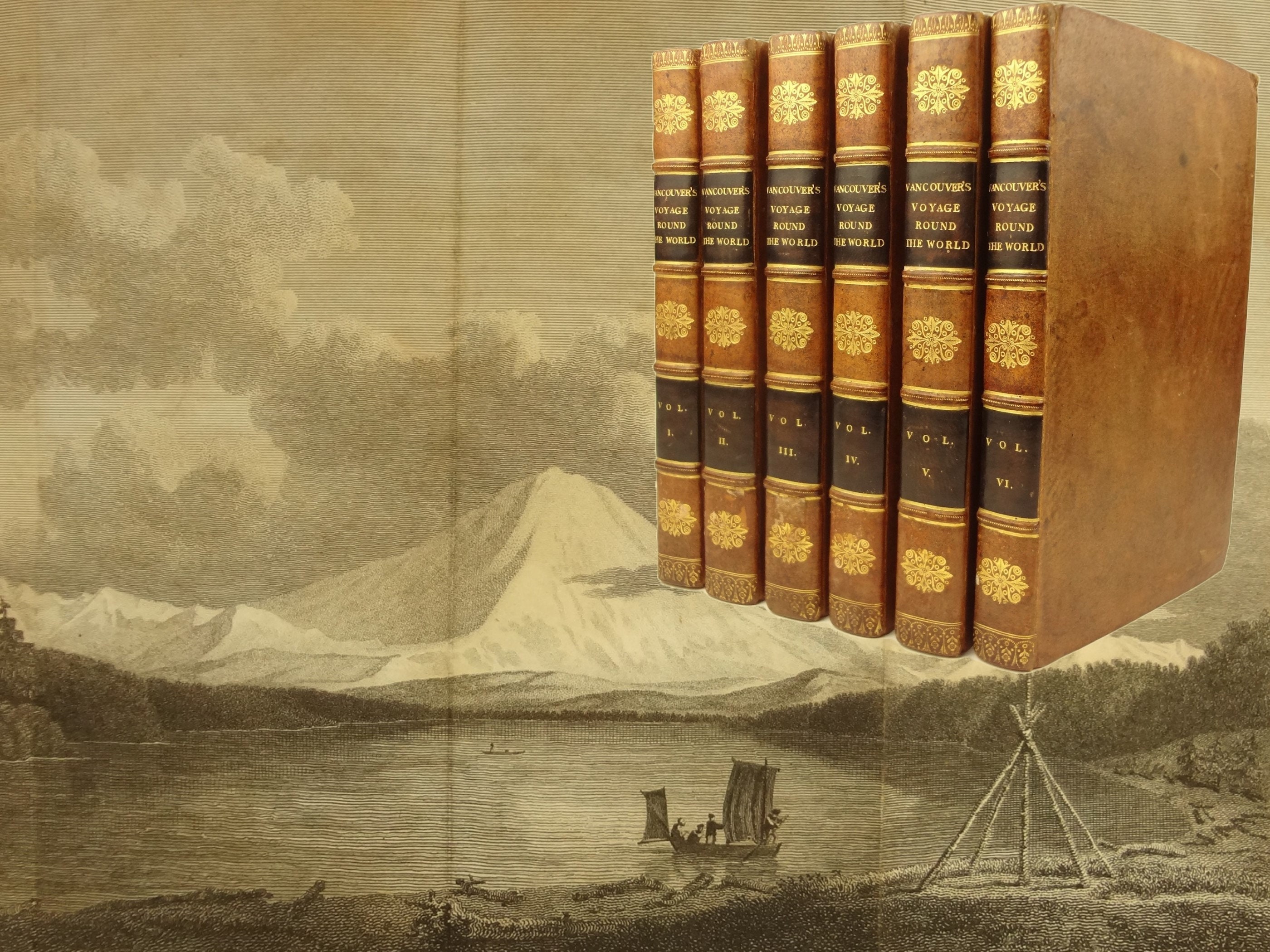 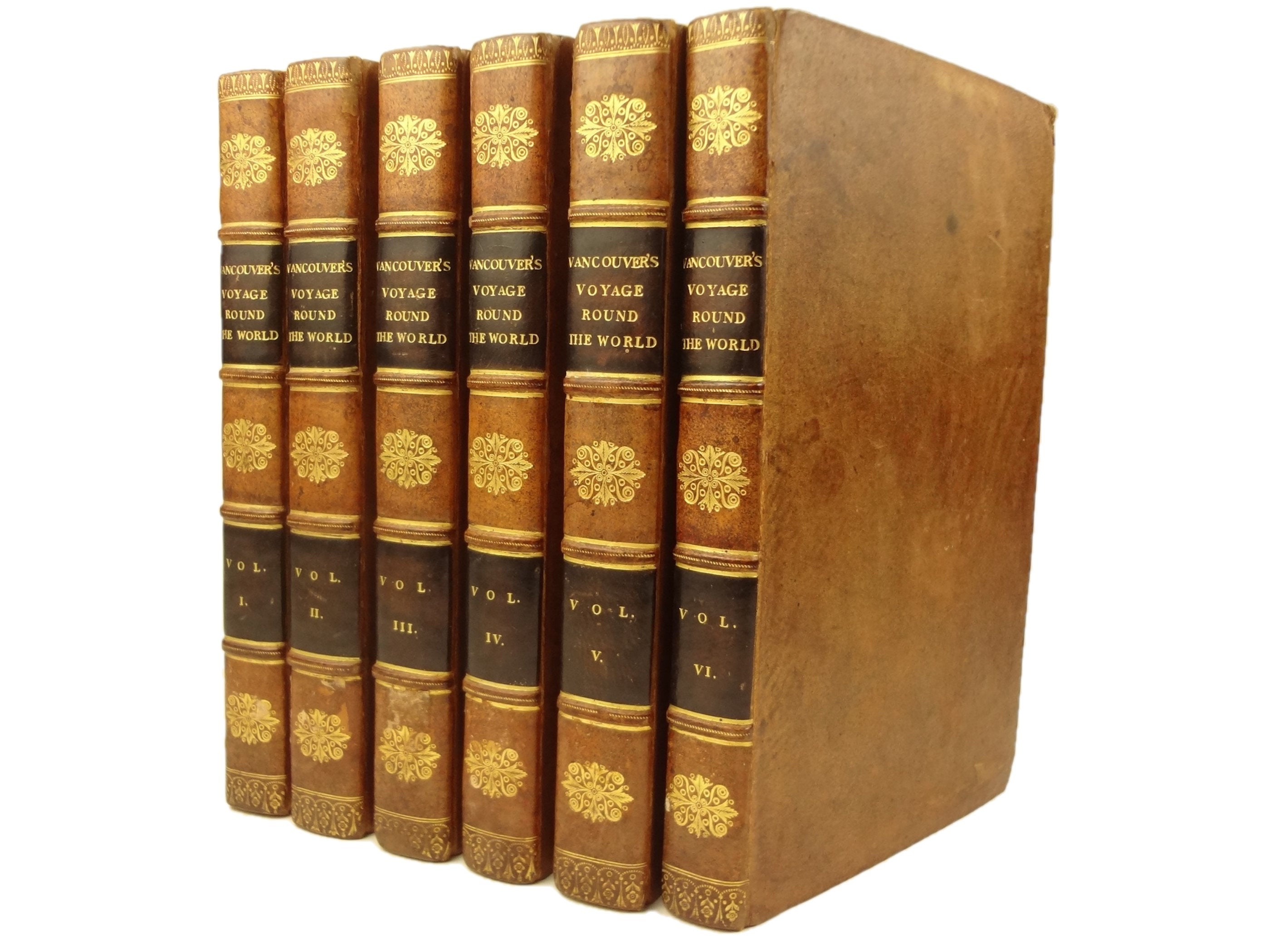 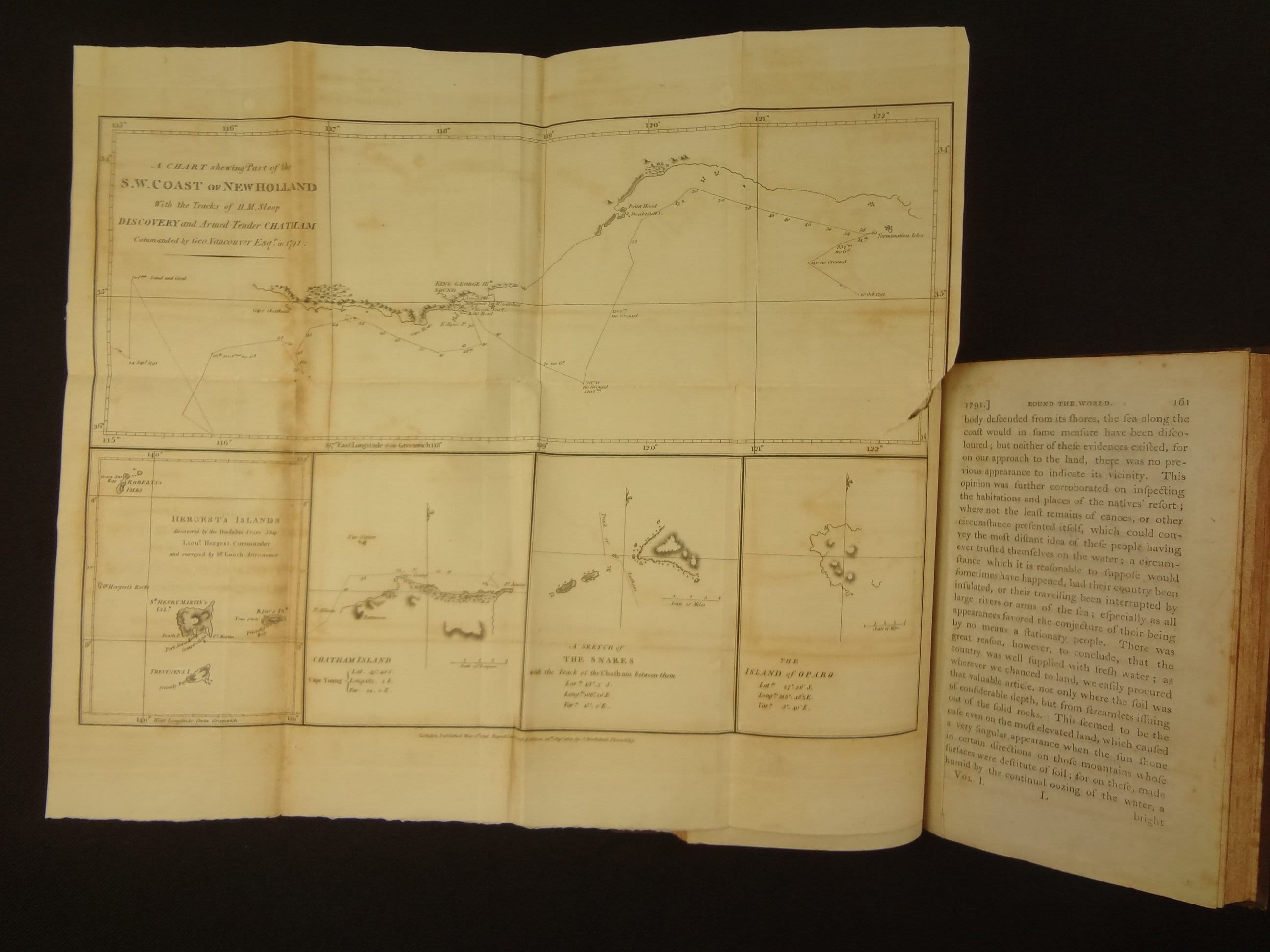 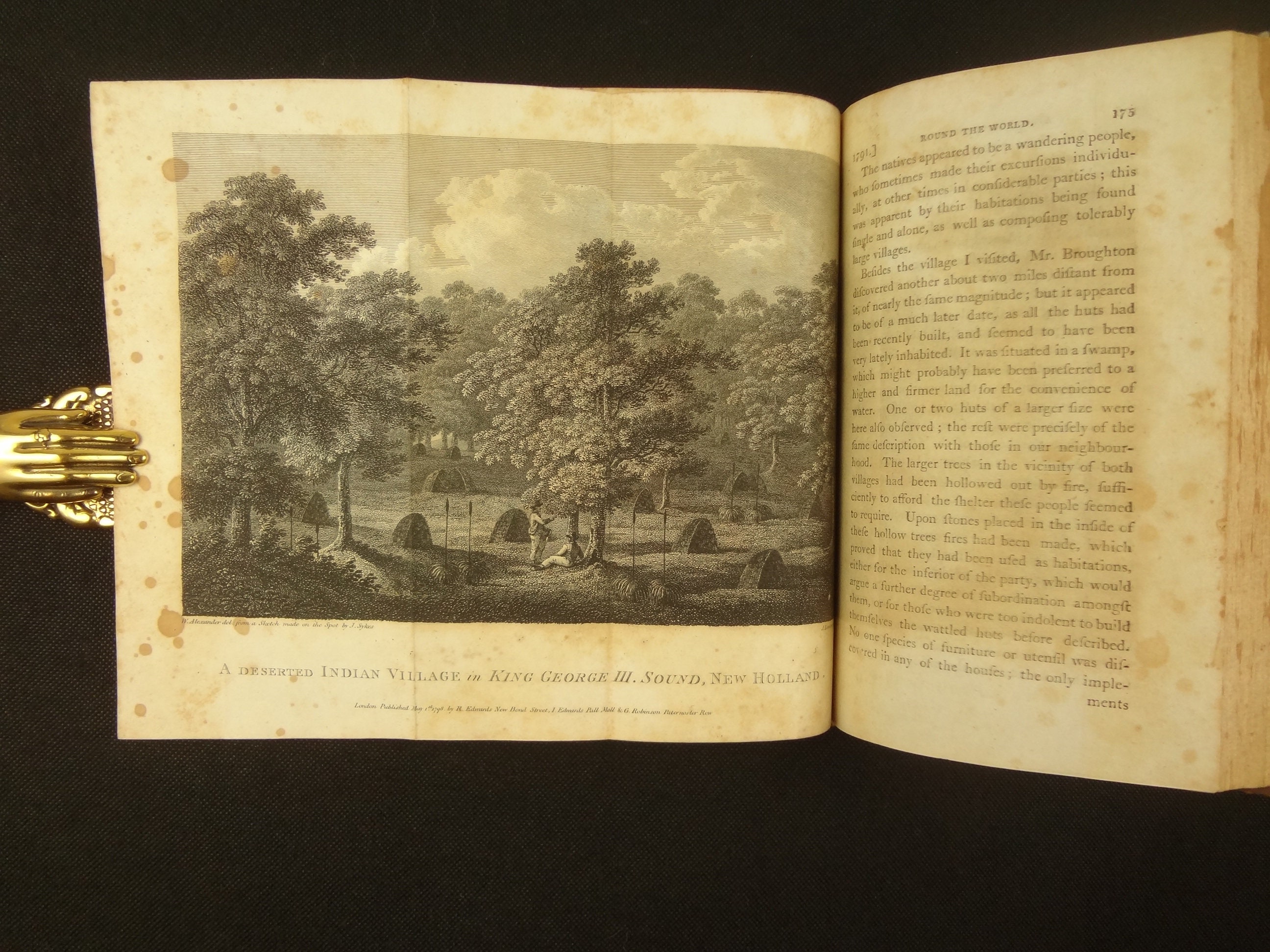 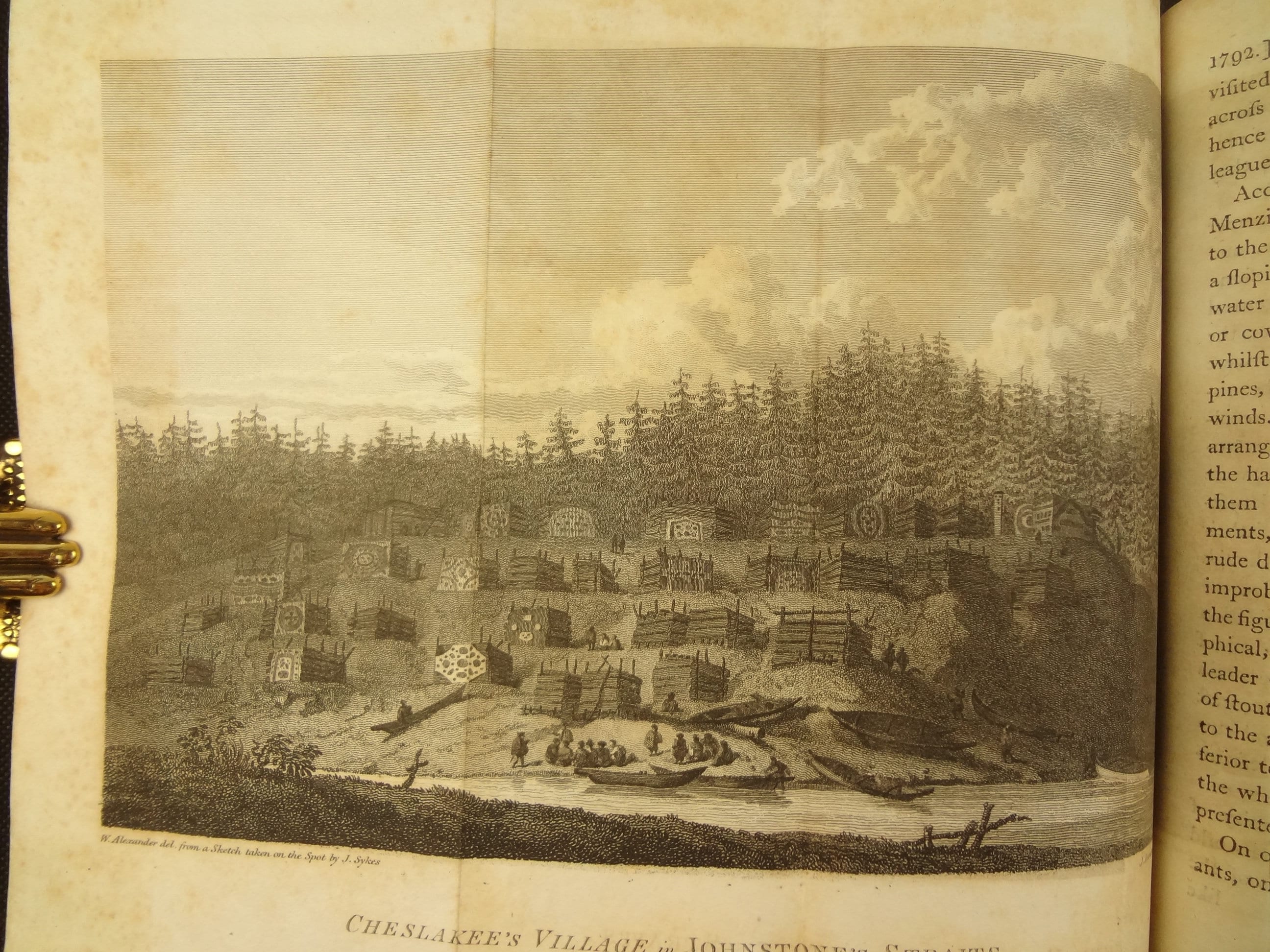 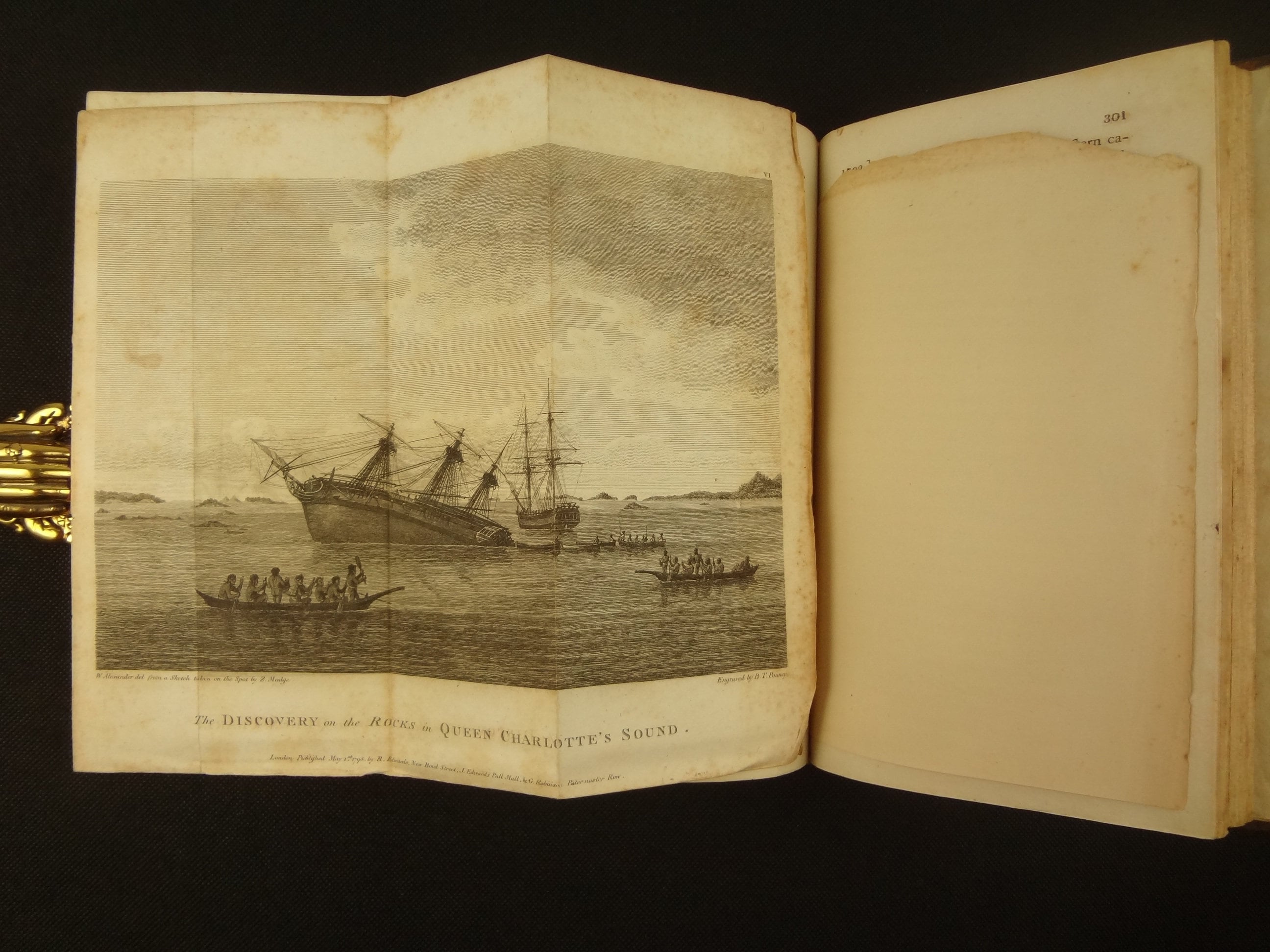 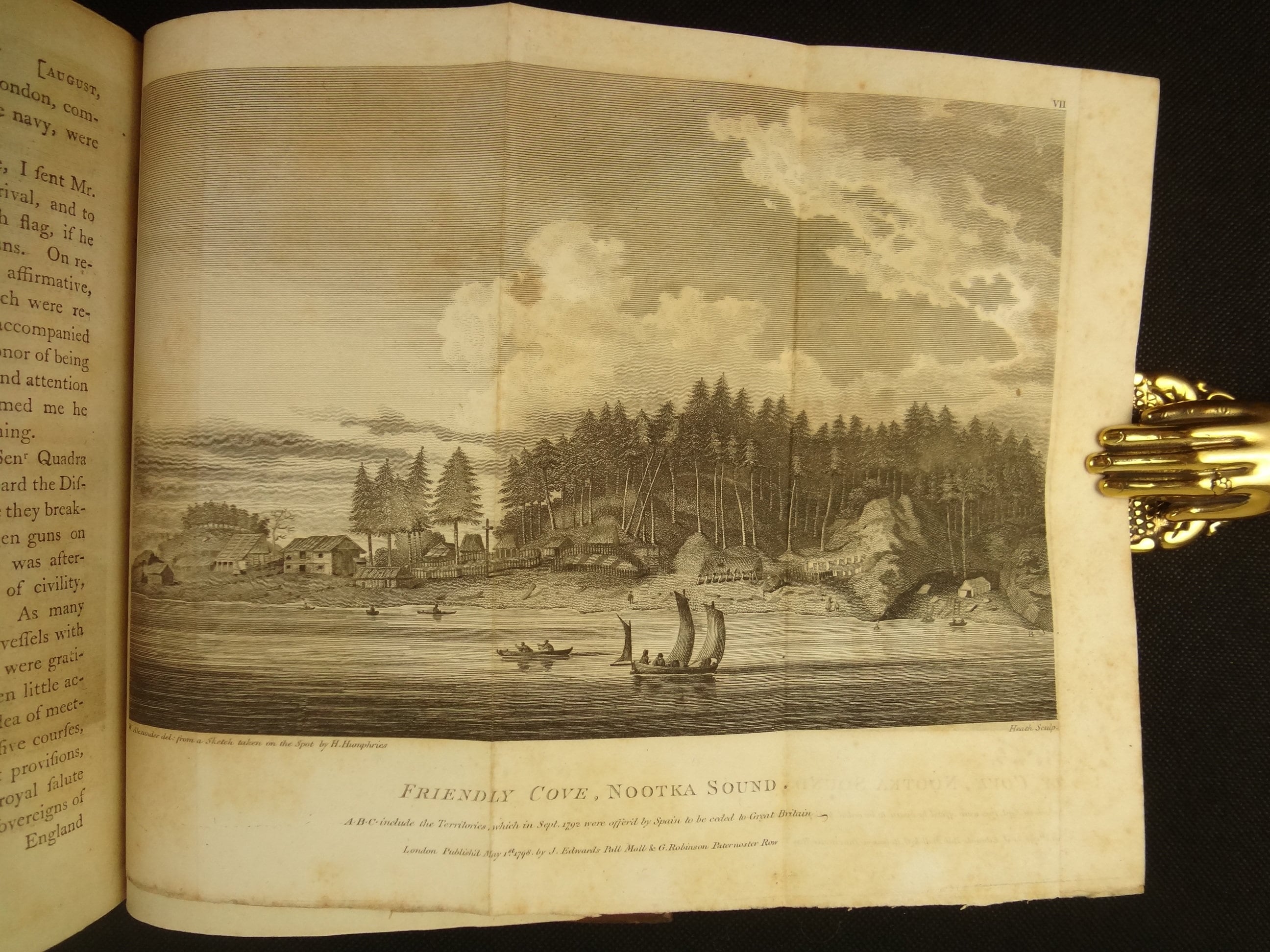 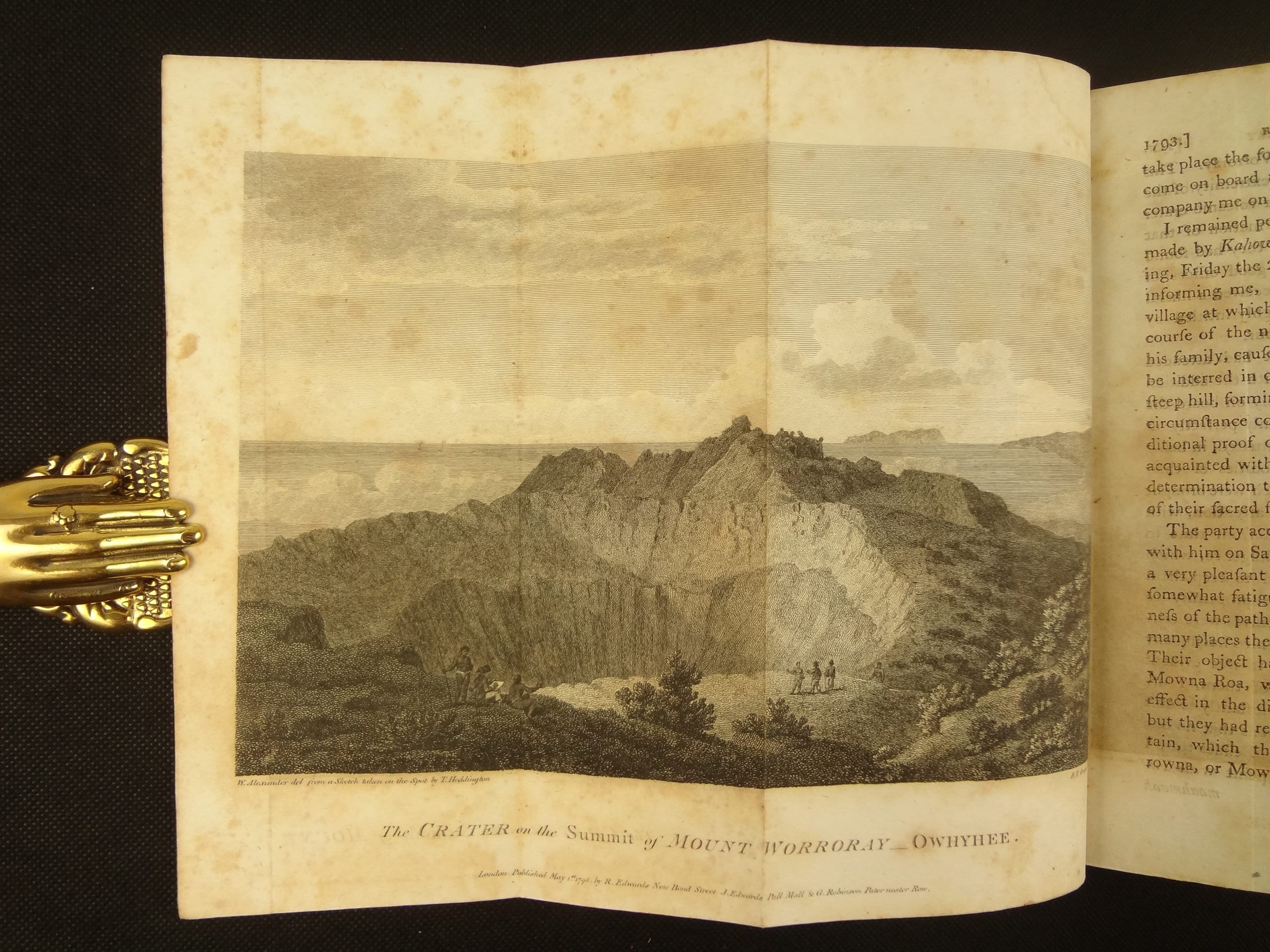 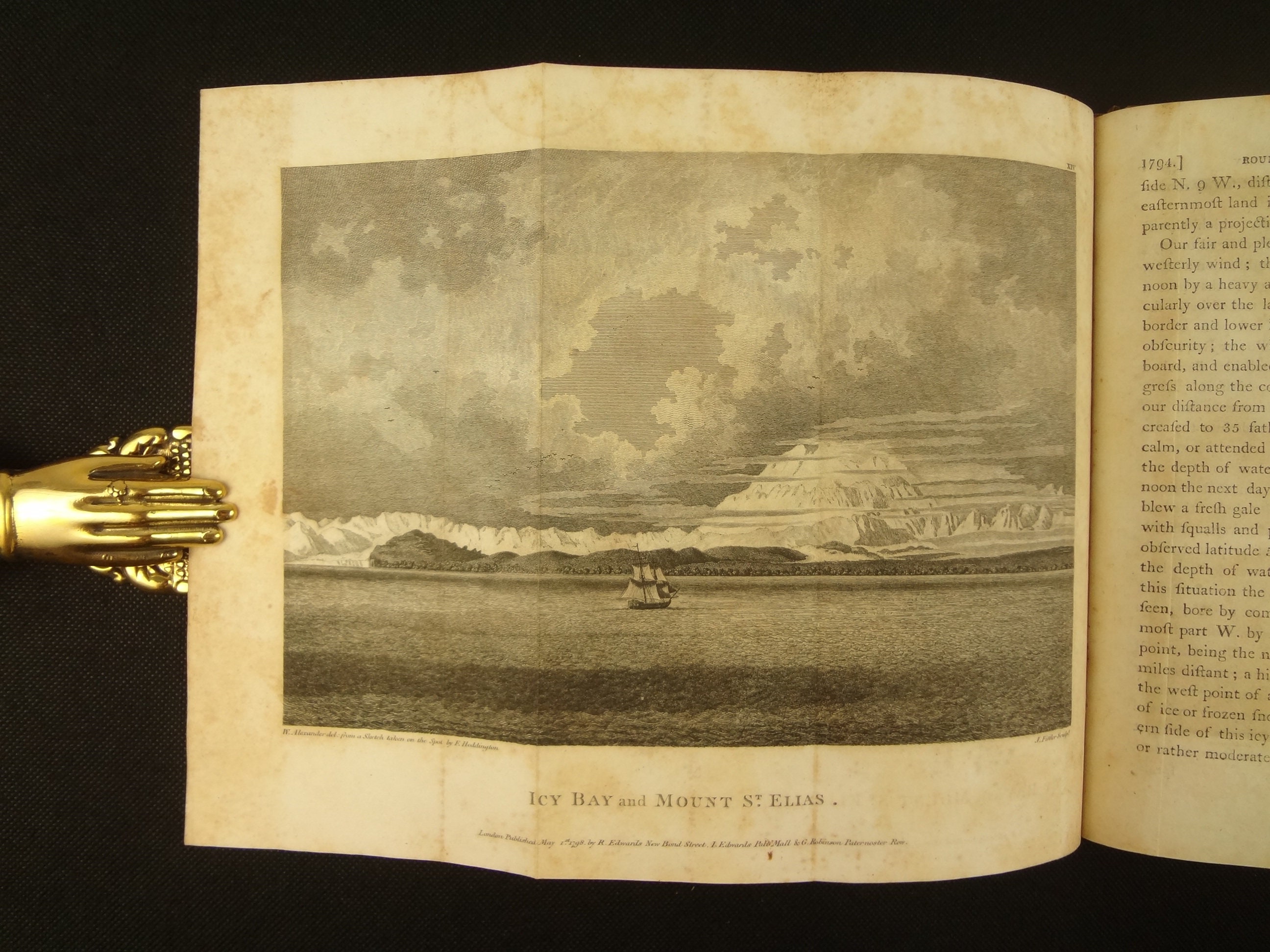 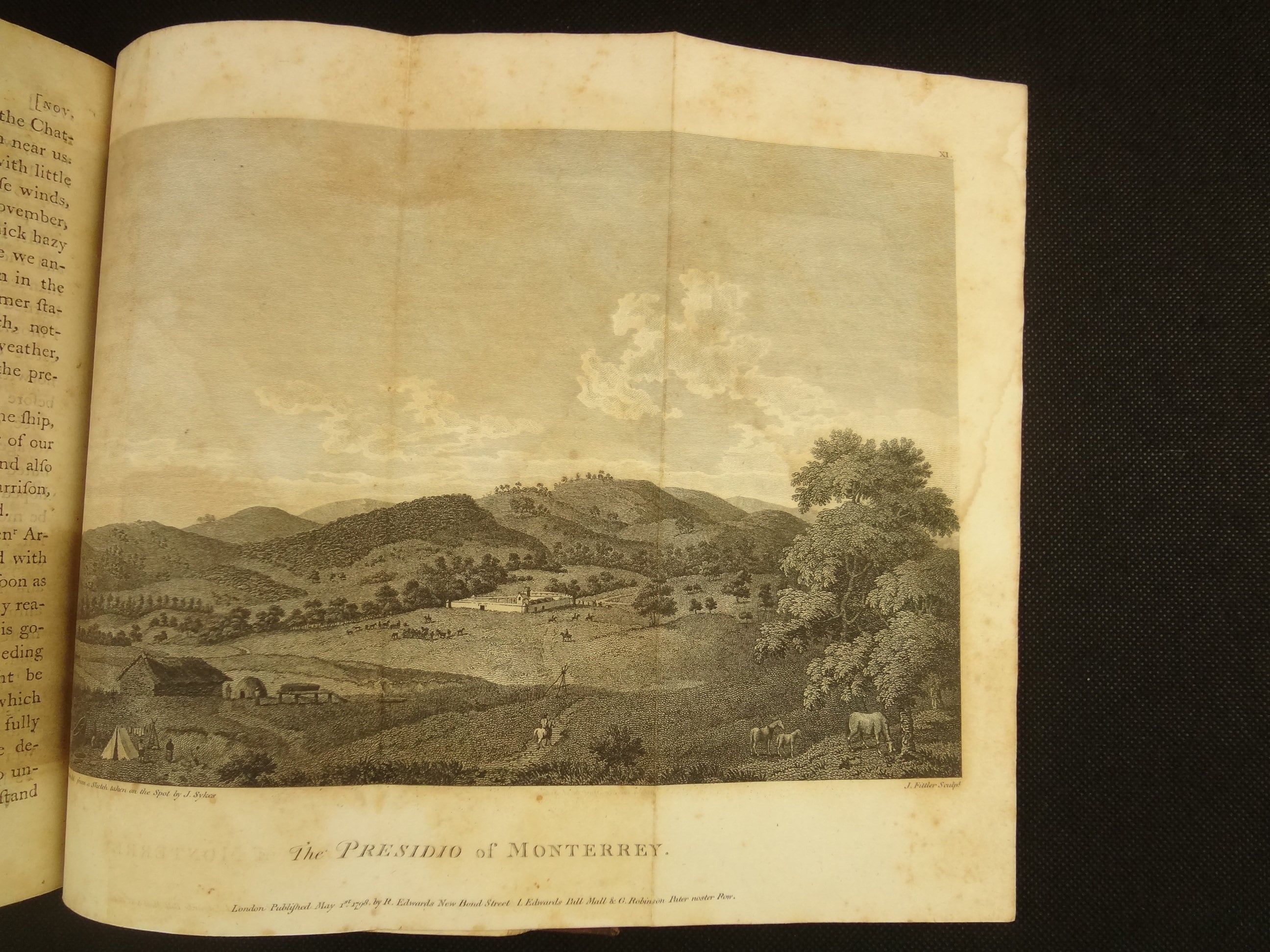 1801 A Voyage of Discovery to the North Pacific Ocean and Round the World..., Captain George Vancouver. Illustrated - 17 plates. 6 volumes.

One of the most important works of Pacific exploration, Captain George Vancouver's A Voyage of Discovery to the North Pacific Ocean, and Round the World...

This is the 8vo sized edition of 1801. It has all seventeen plates, but only one of the two charts it should have. Price reflects condition. At the time of offering this set, the cheapest complete set on the market (per Vialibri) was priced at $5,000 USD.

Proceeding to North America, Vancouver followed the coasts of present-day Oregon and Washington northward. In April 1792 he encountered American Captain Robert Gray off the coast of Oregon just prior to Gray's sailing up the Columbia River.

Vancouver entered the Strait of Juan de Fuca, between Vancouver Island and the present-day Washington state mainland, on 29 April 1792. His orders included a survey of every inlet and outlet on the west coast of the mainland, all the way north to Alaska. Most of this work was in small craft propelled by both sail and oar; maneuvering larger sail-powered vessels in uncharted waters was generally impractical and dangerous.

Vancouver named many features for his officers, friends, associates, and his ship Discovery, including:

Mount Baker – after Discovery's 3rd Lieutenant Joseph Baker, the first on the expedition to spot it

After the summer surveying season ended, in August 1792, Vancouver went to Nootka, then the region's most important harbour, on contemporary Vancouver Island. Here he was to receive any British buildings and lands returned by the Spanish from claims by Francisco de Eliza for the Spanish crown.

Vancouver sailed south along the coast of Spanish Alta California, visiting Chumash villages at Point Conception and near Mission San Buenaventura. In November, he entered San Francisco Bay, later visiting Monterey; in both places, he was warmly received by the Spanish. Vancouver spent the winter in continuing exploration of the Sandwich Islands, the contemporary islands of Hawaii.

The next year, 1793, he returned to British Columbia and proceeded further north. He got to 56°30'N. With worsening weather, he sailed south to Alta California. The Spanish governor refused to let a foreign official into the interior. Vancouver noted that the region's "only defenses against foreign attack are a few poor cannons". He again spent the winter in the Sandwich Islands.

In 1794, he first went to Cook Inlet, the northernmost point of his exploration, and from there followed the coast south. Boat parties charted the east coasts of Chichagof and Baranof Islands, circumnavigated Admiralty Island, explored to the head of Lynn Canal, and charted the rest of Kuiu Island and nearly all of Kupreanof Island. He then set sail for Great Britain by way of Cape Horn, returning in September 1795, thus completing a circumnavigation of South America.

Vancouver faced difficulties when he returned home to England. The accomplished and politically well-connected naturalist Archibald Menzies complained that his servant had been pressed into service during a shipboard emergency; sailing master Joseph Whidbey had a competing claim for pay as expedition astronomer; and Thomas Pitt, 2nd Baron Camelford, whom Vancouver had disciplined for numerous infractions and eventually sent home in disgrace, proceeded to harass him publicly and privately.

Vancouver, at one time amongst Britain's greatest explorers and navigators, died in obscurity on 10 May 1798 at the age of 40, less than three years after completing his voyages and expeditions. He had not completed putting together his A Voyage of Discovery…, regarding his expedition, and his brother finished the work with help from Captain Peter Puget.

The first edition was published in three volumes, with 17 plates and one chart, and with an atlas adding 10 charts and 6 plates of coastal profiles, in the autumn of 1798.

The (this) octavo edition appeared in 1801. The engraving plates of the 1st edition Atlas had been stolen, so for the octavo edition only two charts were reproduced (one missing from this copy), but all 17 of the volume plates were again printed to accompany it.

"The publisher finds it necessary only to state, for the information of the purchasers of this new edition, that the copper-plates of the charts contained in the folio volume, which accompanied the first edition, were all stolen, and may therefore be considered as irrecoverably lost. The whole of the views, except the headlands, are retained. The general chart, and that of the new discoveries, &c. are re-engraved ..."--Advertisement, v. 1, page 7

Table of contents and list of plates for all volumes on pages 9-28 in vol. 1

See pictures. Missing the first chart. Leather bindings with edge and corner wear, with some rubbing to boards. Slight start of cracking at fifth volumes joints. Flyleaf seems to have been removed from every volume; still a binder's blank endpaper before text blocks.

I think the books were once in a more humid place as there is some intermittent moisture marks from the edges.