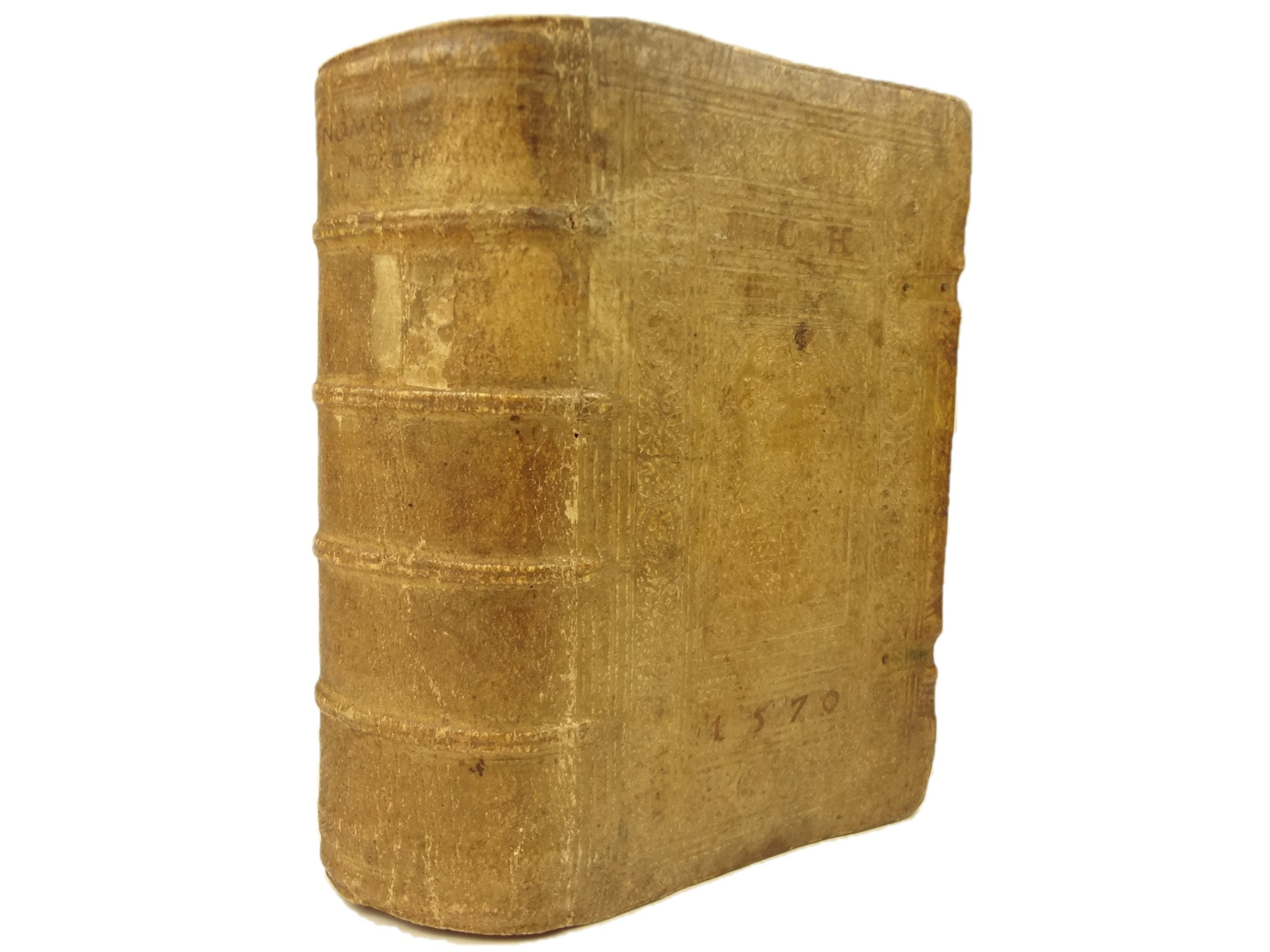 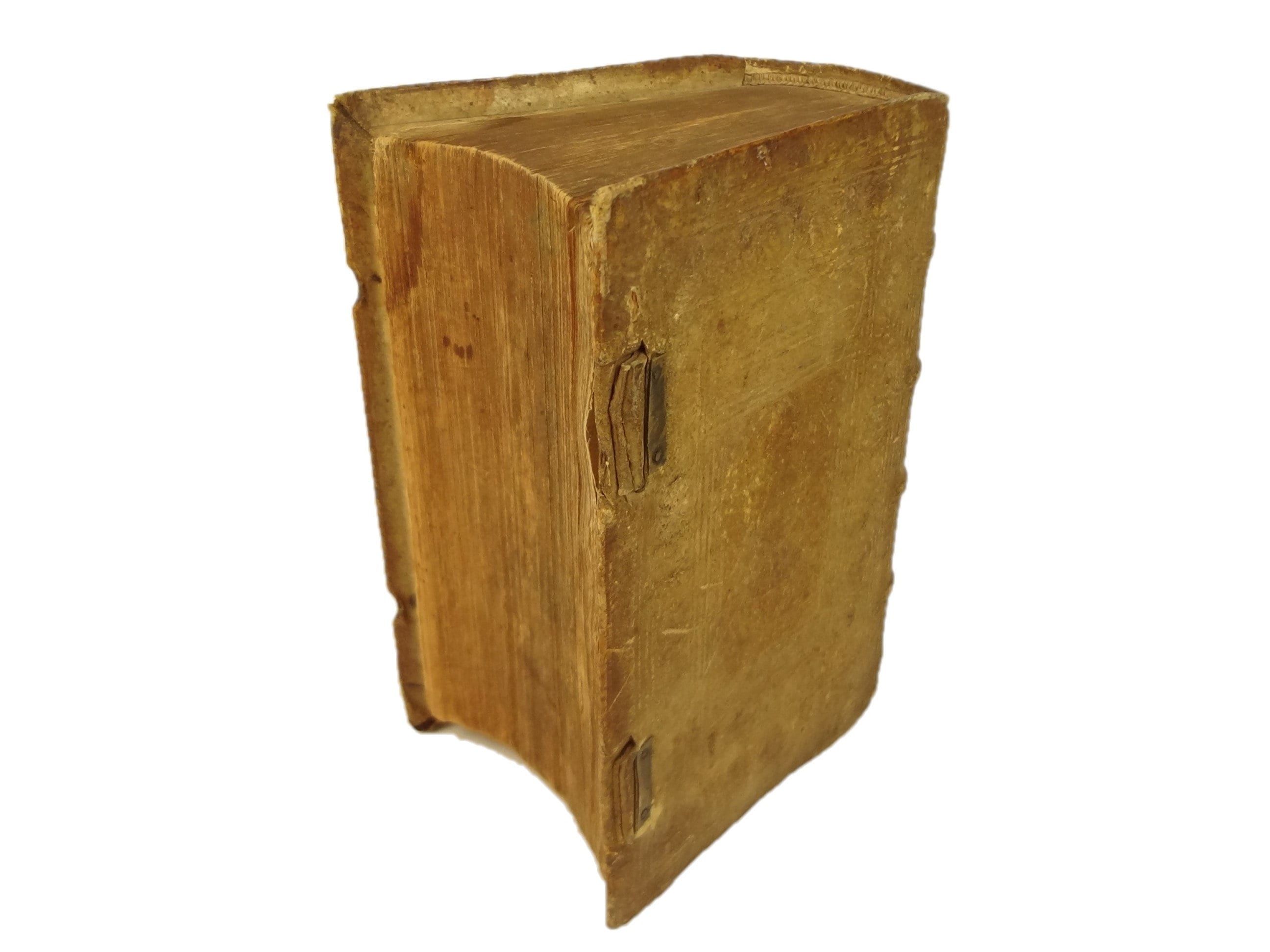 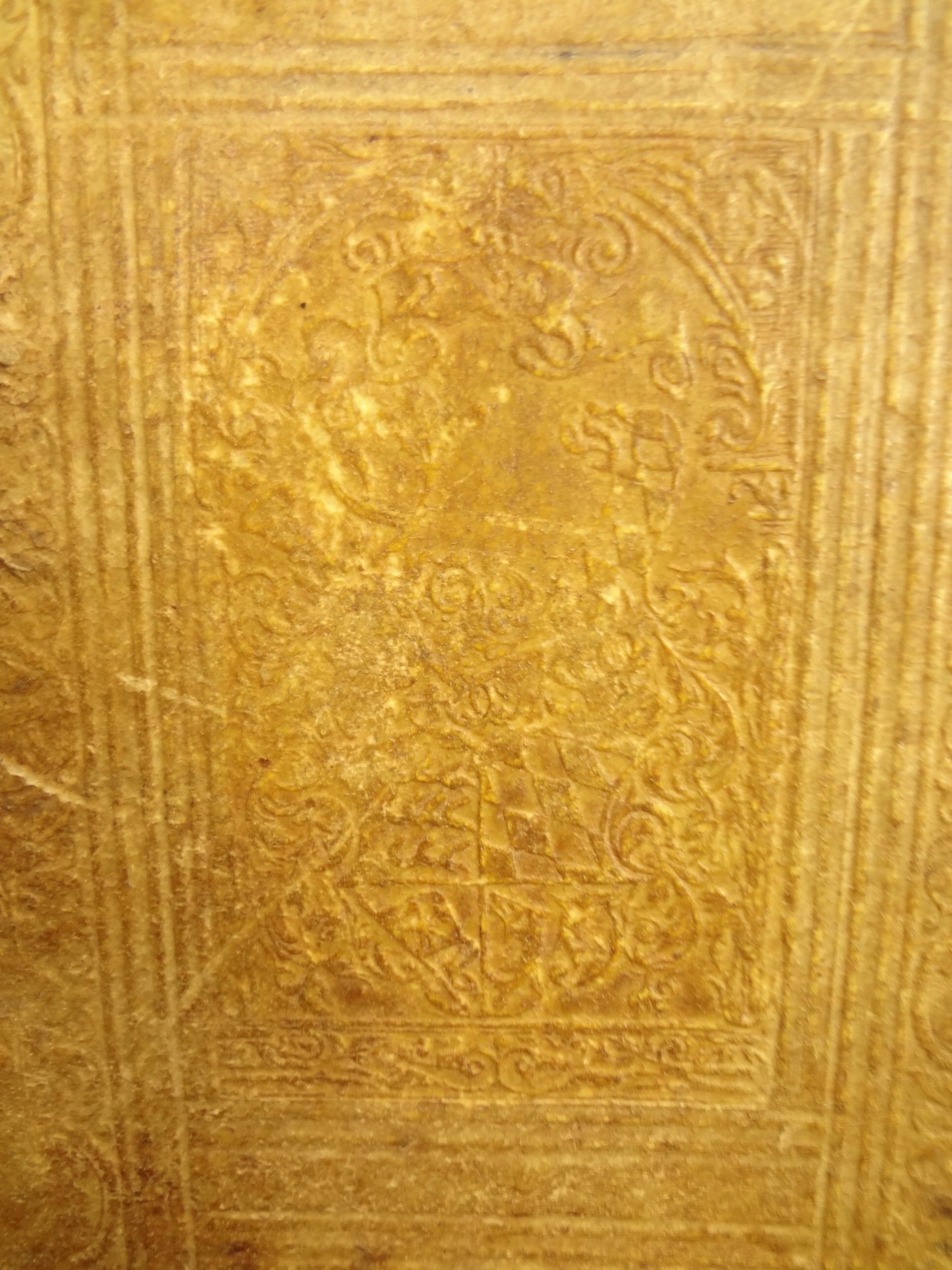 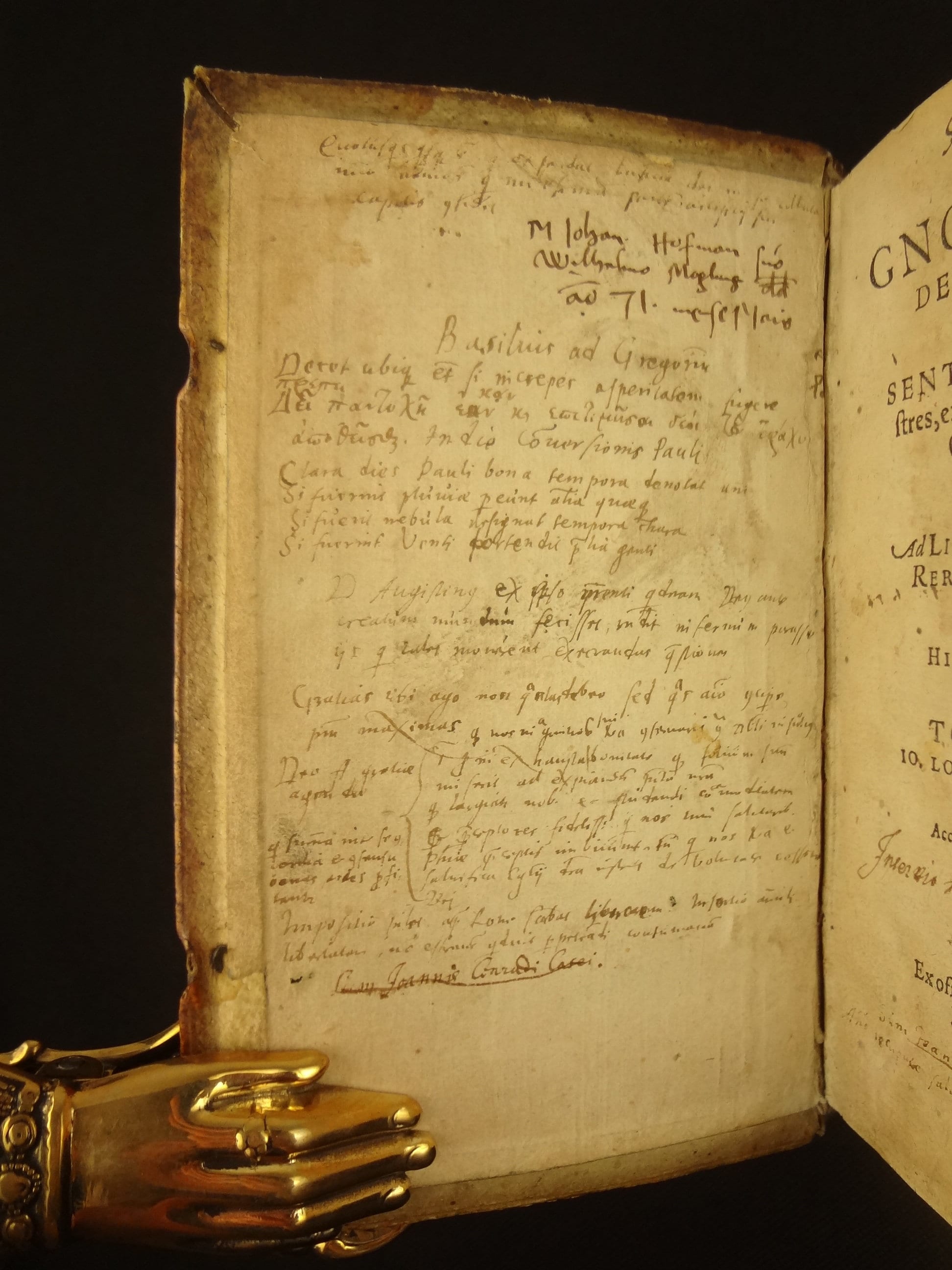 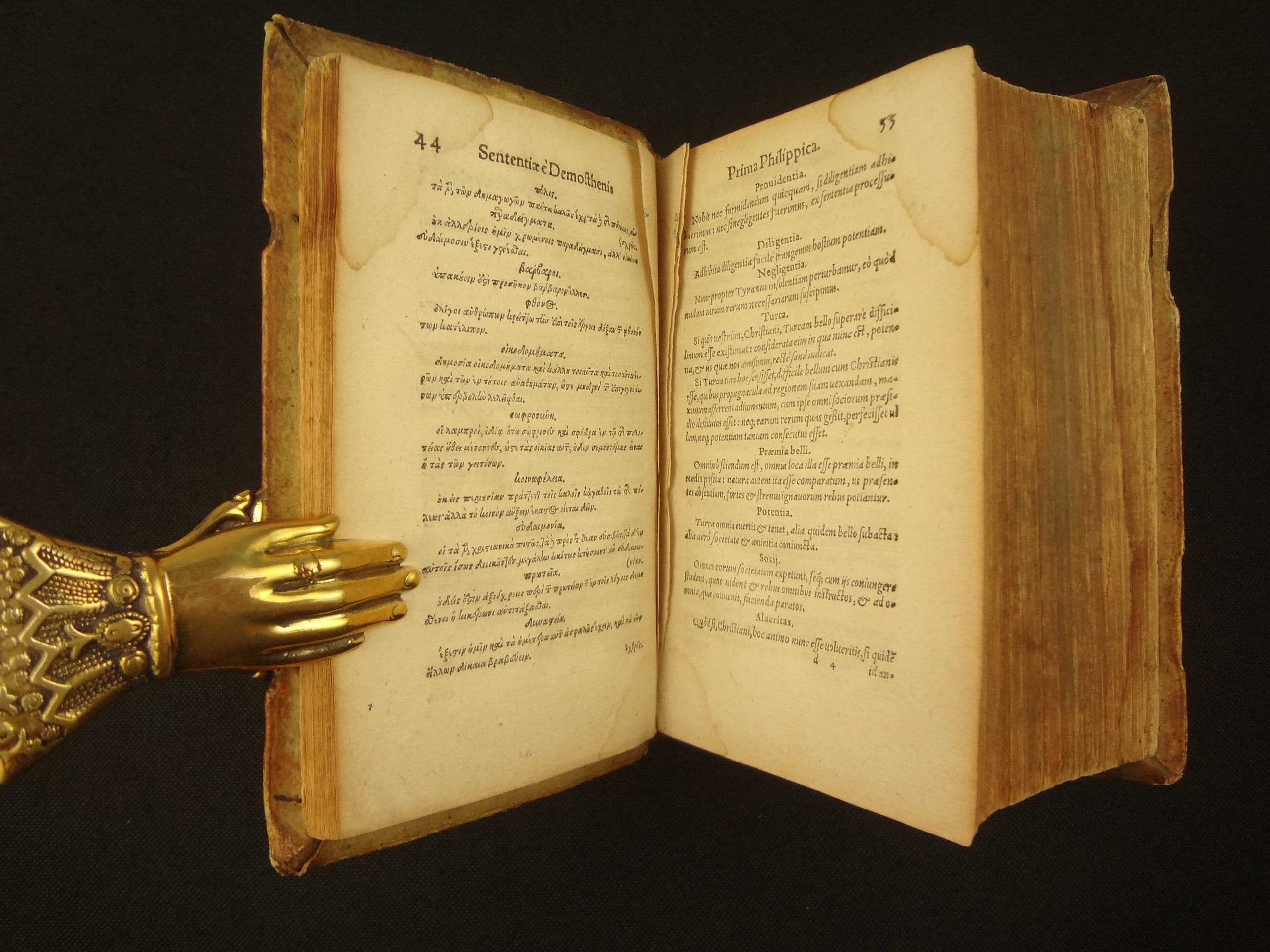 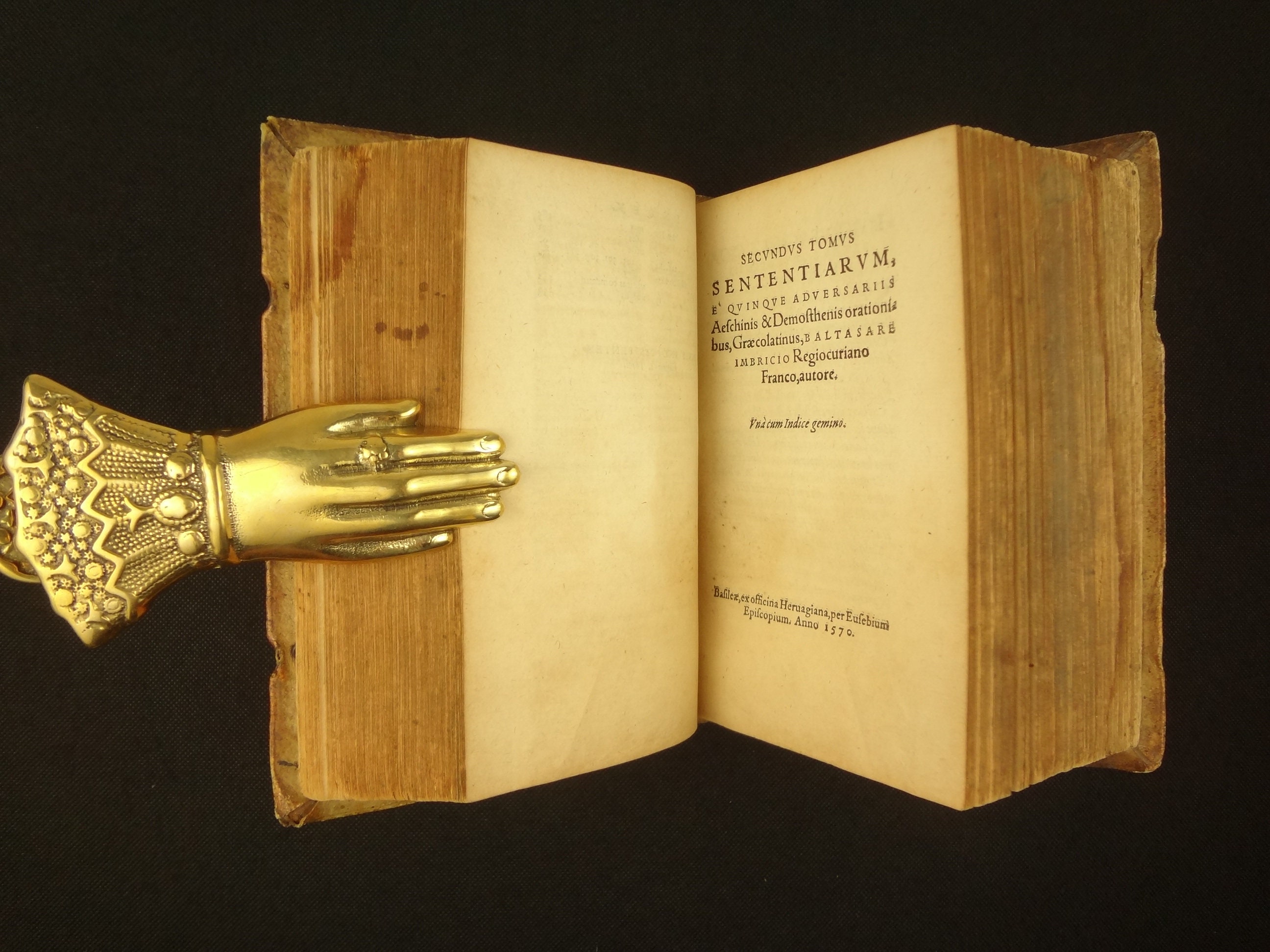 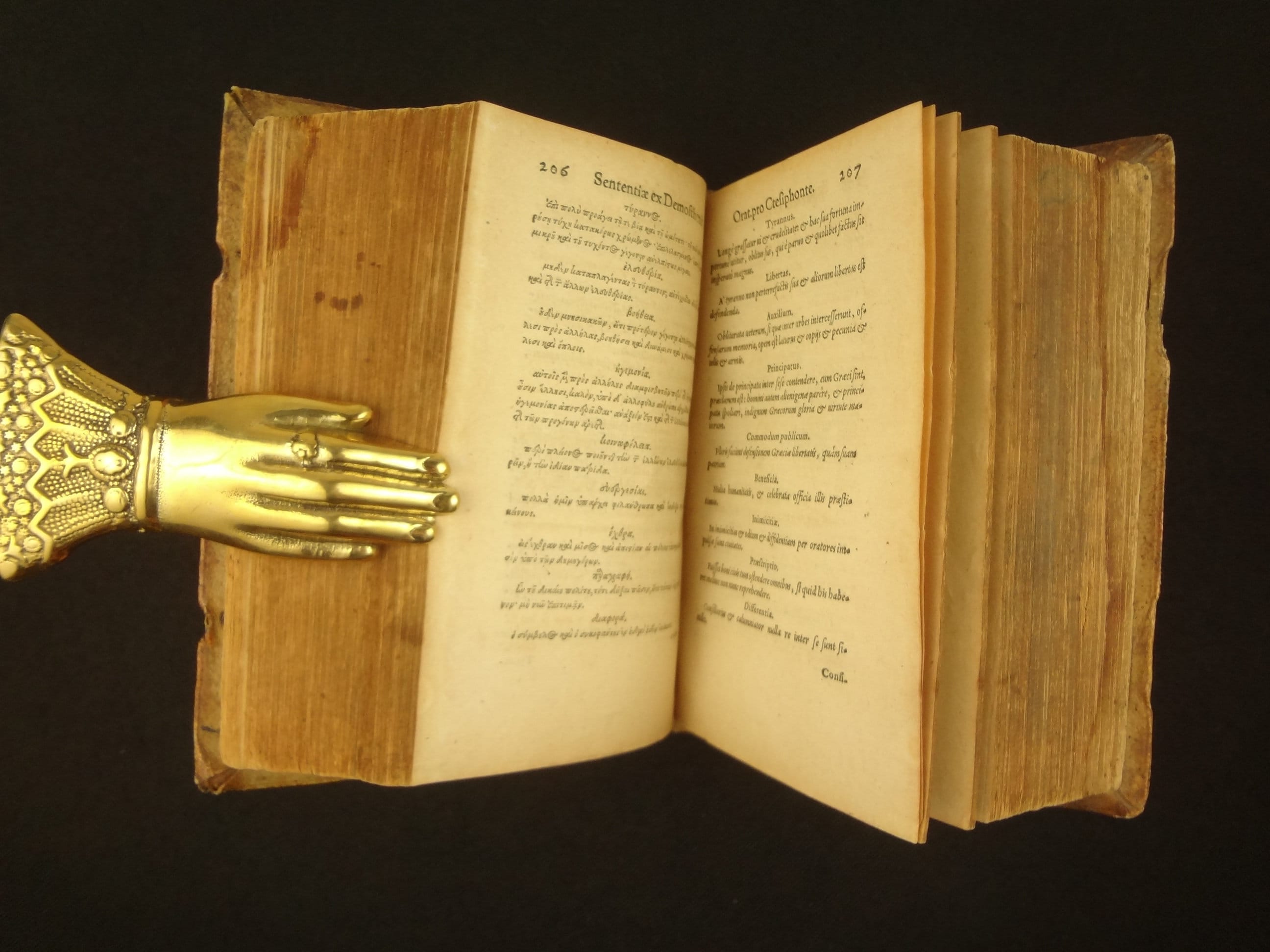 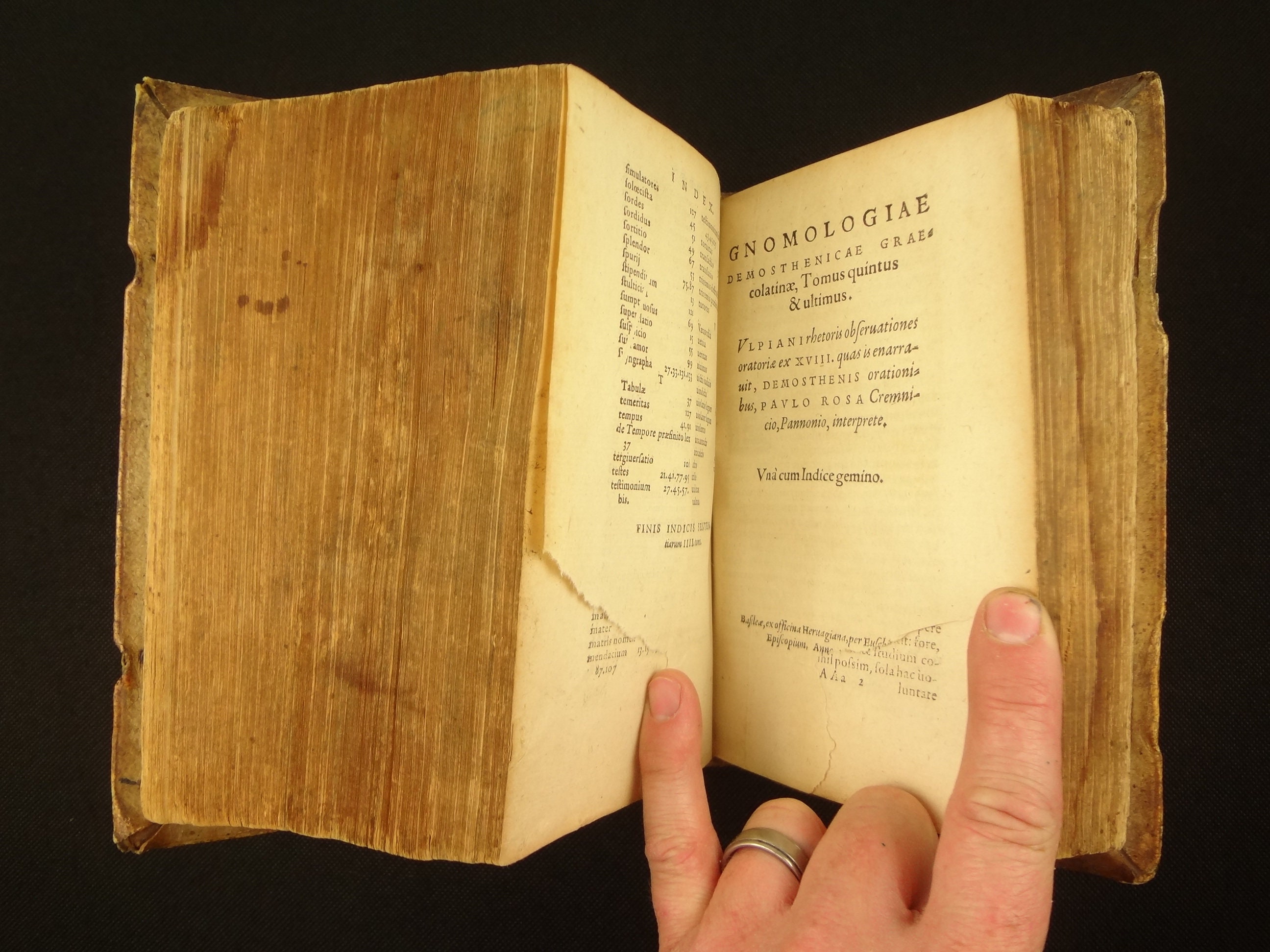 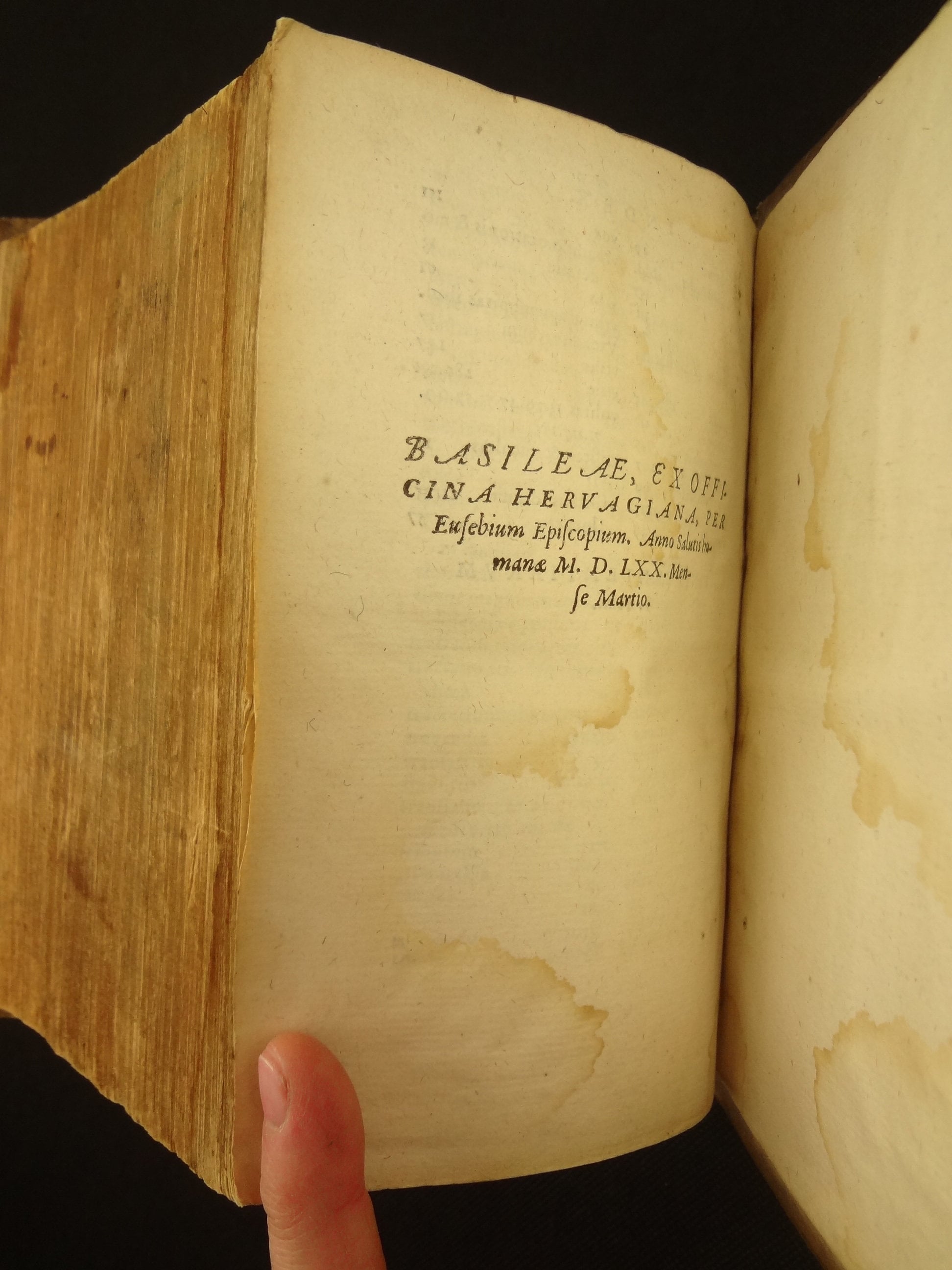 Five volumes in one binding, a 1570 printing of Hieronymus Wolf's translation of Demothenes and Aeschines. A somewhat rare edition, even more unique being a dated binding with the arms of the German Wurttemberg, the region in which Wolf worked as librarian.

Gnomology is a seldom used word, meaning "a collection of, or a treatise on, maxims, grave sentences or reflections."

Hieronymus Wolf was a prodigy at Greek and produced the first complete translation of the works of Demosthenes, who was considered particularly difficult to translate, first printed in folio in 1549. The few bibliographies that mention this edition count it as a later printing of Wolf's first edition... but I'm unsure, it seems likely augmented (for example the title of the 1549 Wolf work doesn't include Aeschines).

Wolf became librarian at the Fugger Library in 1551, which became part of the Bibliotheca Palatina, considered one of the most important German Renaissance libraries. The Bibliotheca Palatina was based in Heidelberg. This library was so important that when the Catholic League conquered Heidelberg in 1622, the took special care to utterly destroy the library and disperse its works.

This book's boards have the coat of arms of Baden-Wurttemberg, the German duchy Heidelberg is in. A remarkably sporting coat of arms was produced for this region; a hunting dog and hunting horn extend from a shield with three deer in the upper left and three fish in the bottom right. Also, of note, the medallions around the edge are likely the heads of the reformers (larger bindings with the Wurttemberg arms have the names of the reformers with their heads).

There is a painting of the Duke Ludwig of Wurttemberg (reigned 1568-1593) with this coat of arms painted above him.

Another interesting point about this book, the pastedown has an interesting manuscript inscription "Clara dies pauli bon a...". An online explanation -

"Clara dies Pauli bona tempora denotet anni, si fuerint venti, designant prælia genti, si fuerint nebula, pereunt animalia quæque si nix, si pluvia, designent tempora cara." (If St. Paul's day be fair and cleare it doth betide a happy yeare: but if by chance it then should raine, it will make dear all kinds of graine. And if the clouds make dark the skie, then neate and fowls this year shall die: if blustering winds do blow aloft, then wars shall trouble the realm full oft .)

"There is a general tradition , " says Sir Thomas Browne, "in most parts of Europe, that inferreth the coldnesse of succeeding weather from the shining of the sun on Candlemas Day, according to the provincial distich."

I didn't find the perfect match for the binding tools, but I came close. Einbanddatenbank workshop ID 502721s also has the initials IH applied to a Wurttemberg coat of arms too. They attribute this tool to Georg/Jorg Hunne working in Wurttemberg. Our example has "IHH" though, although someone filled in the second H with ink to resemble a "C".

The work is registered as Universal Short Title Catalogue number 659942. They record 20 copies in the world's libraries. None of the copies are in the U.S..

Dibdin discusses the various editions in An Introduction to the Knowledge of Rare and Valuable Editions..., but with some noted confusion.

See pictures. 450 year old binding certainly shows signs of wear, with soiling, edge wear, etc. The hardware has been taken off, leaving only studs in the boards. Binding is splayed, because they packed all the volumes in one binding. Noticeable moisture mark, intermittent throughout and visible on the side of the text block. Top edge dusty. Remnants of label on spine. No flyleaf. Many ownership inscriptions and notes on pastedown and title page. Small tear at bottom of title page. First dozen top corner dog-eared. Some toning, thumbing, occasional dog eared page, page-edge chip, etc throughout. Someone tore out pages 45-54 (five leaves) leaving stubs at gutter volume one. Damage at bottom corner of V3 page 159. Ink marks on V3 page 161. Last leaf of the fourth volume, and 1st leaf of 5th volume torn at bottom corner.