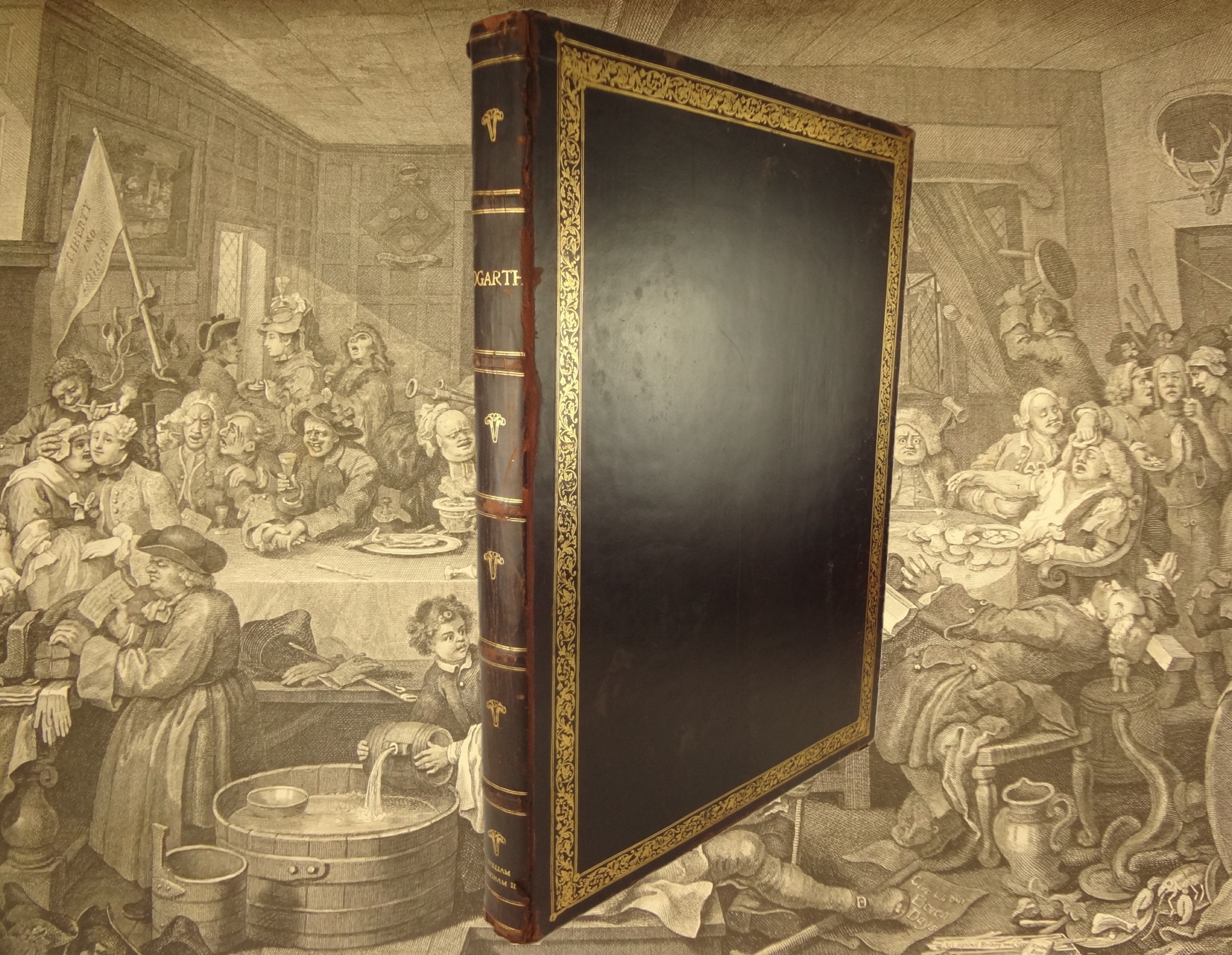 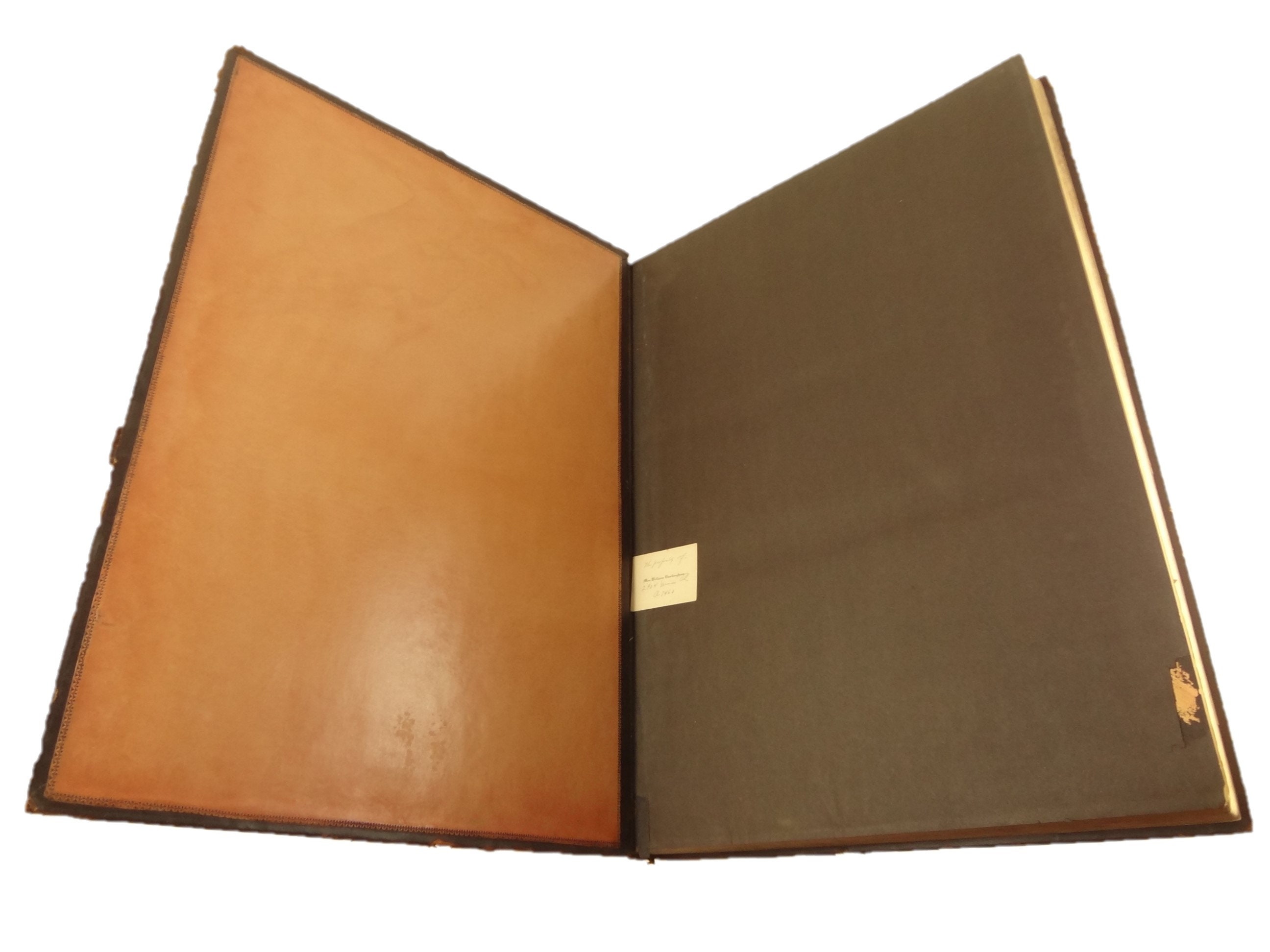 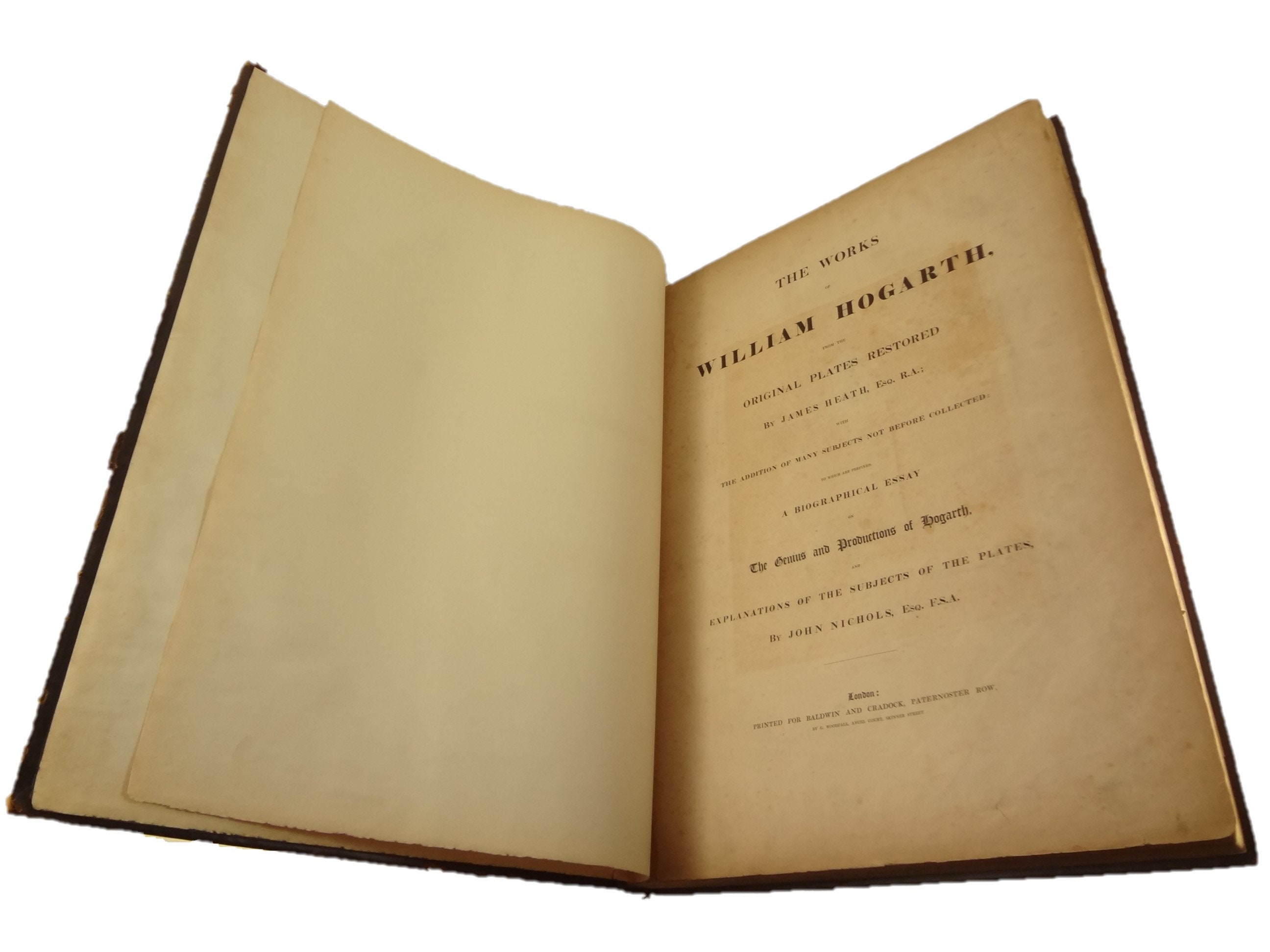 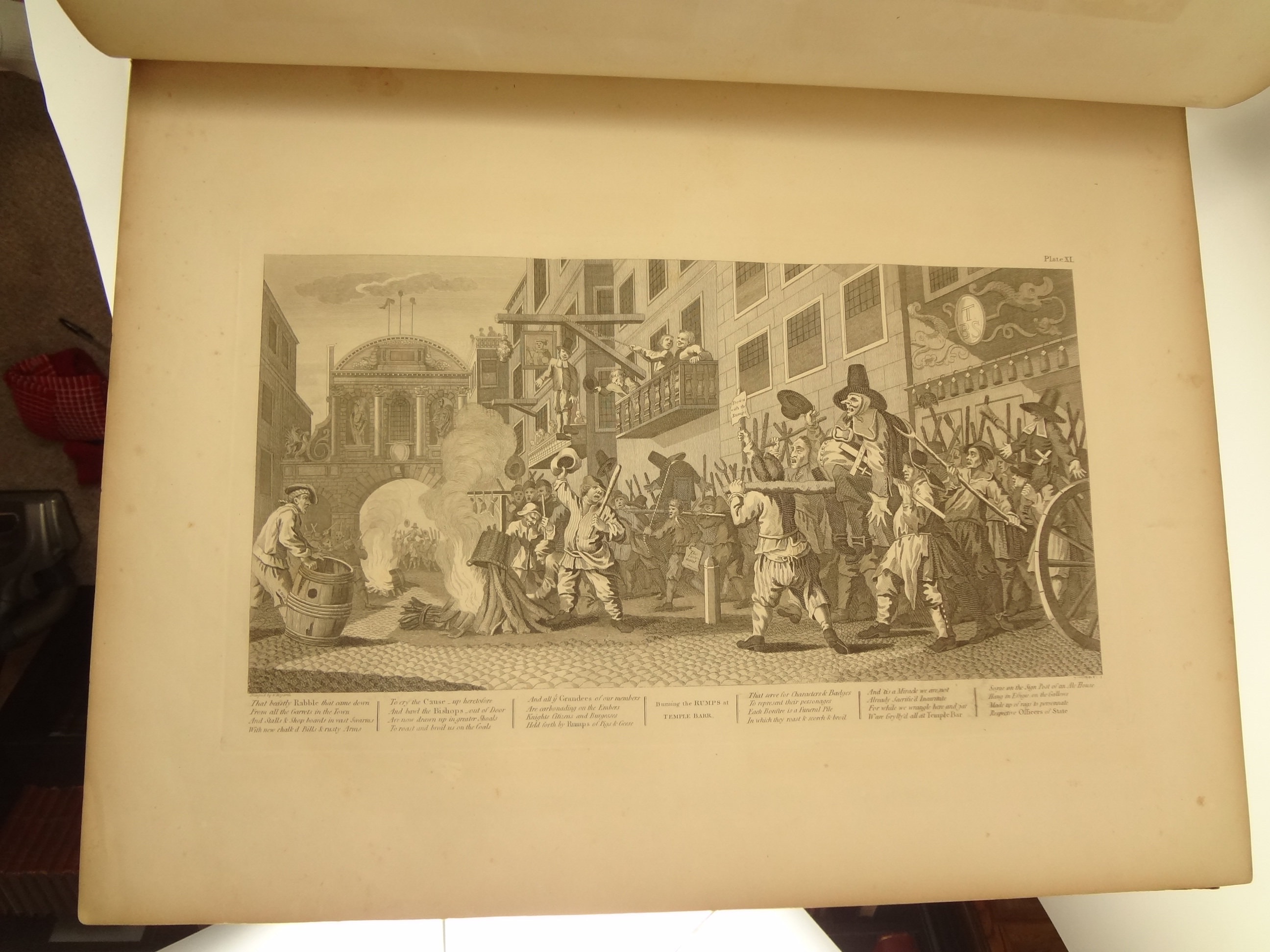 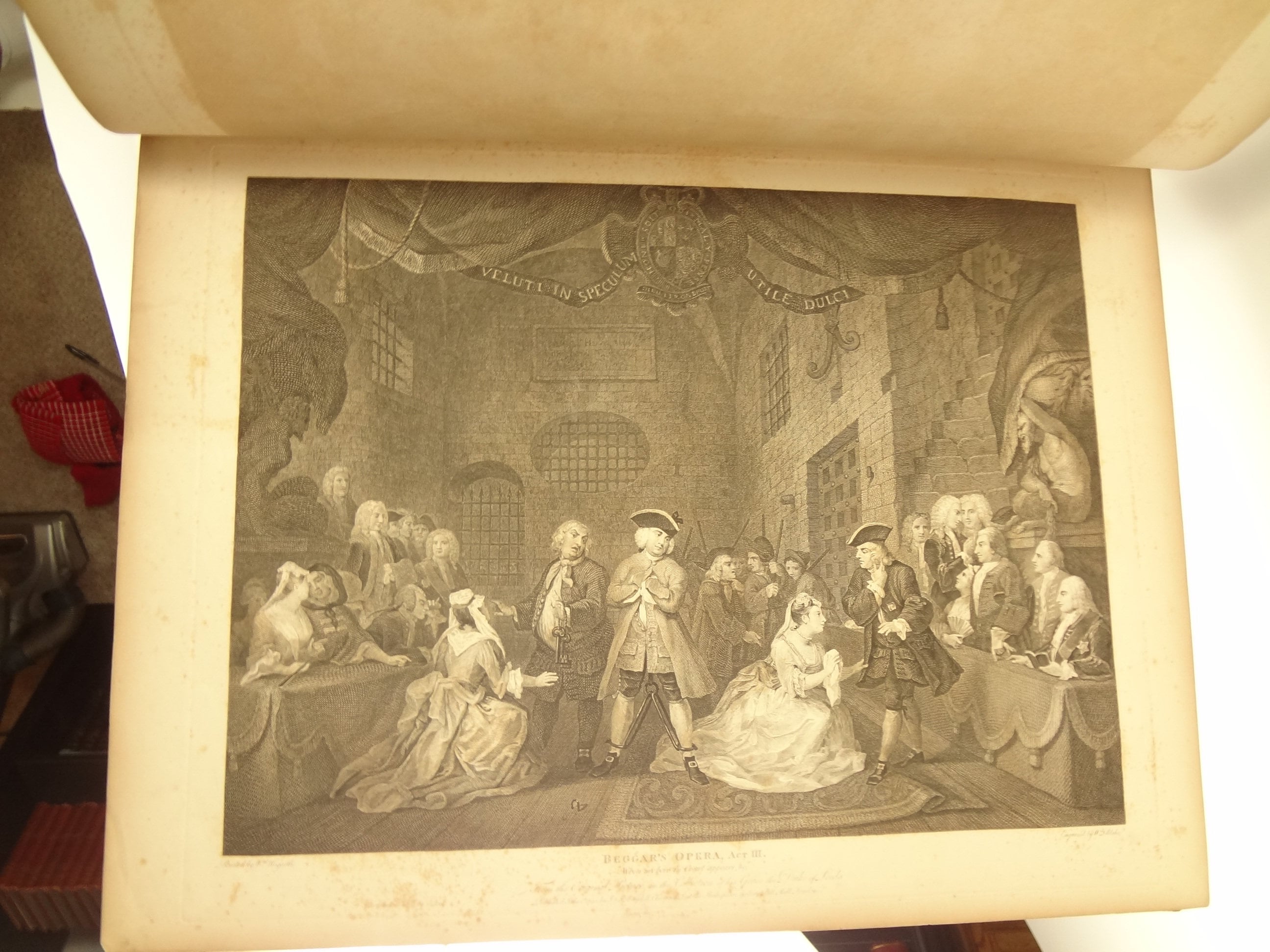 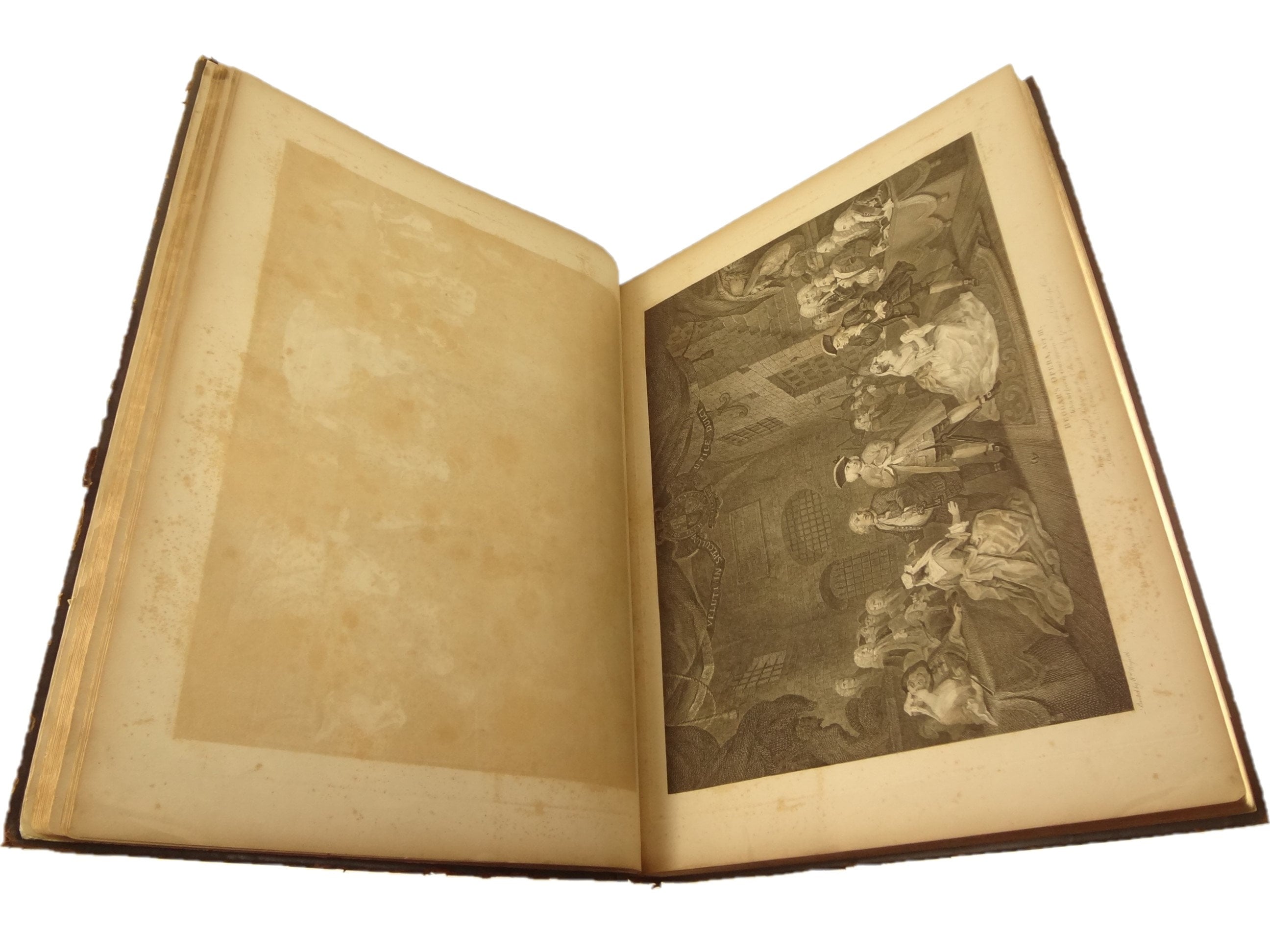 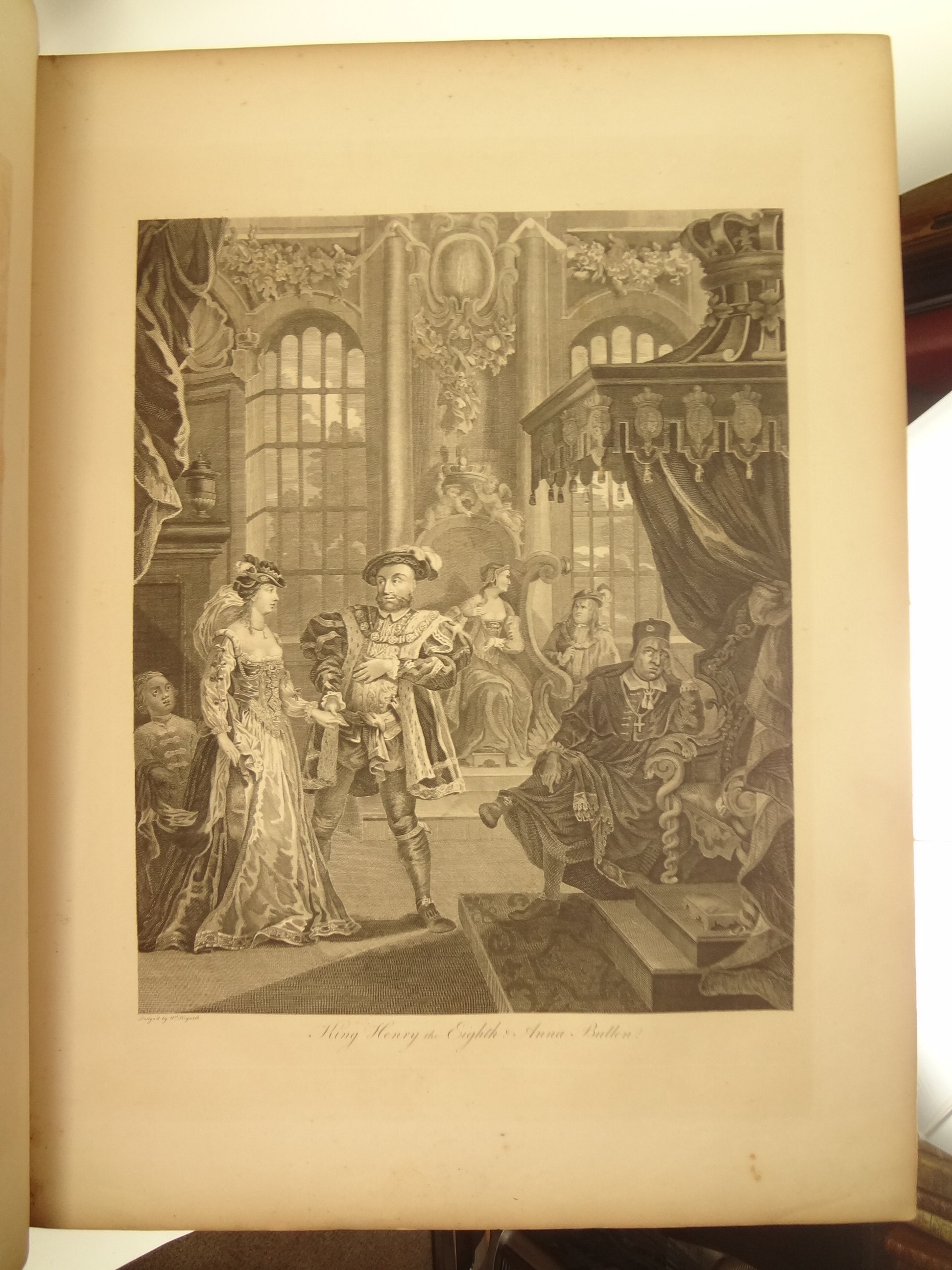 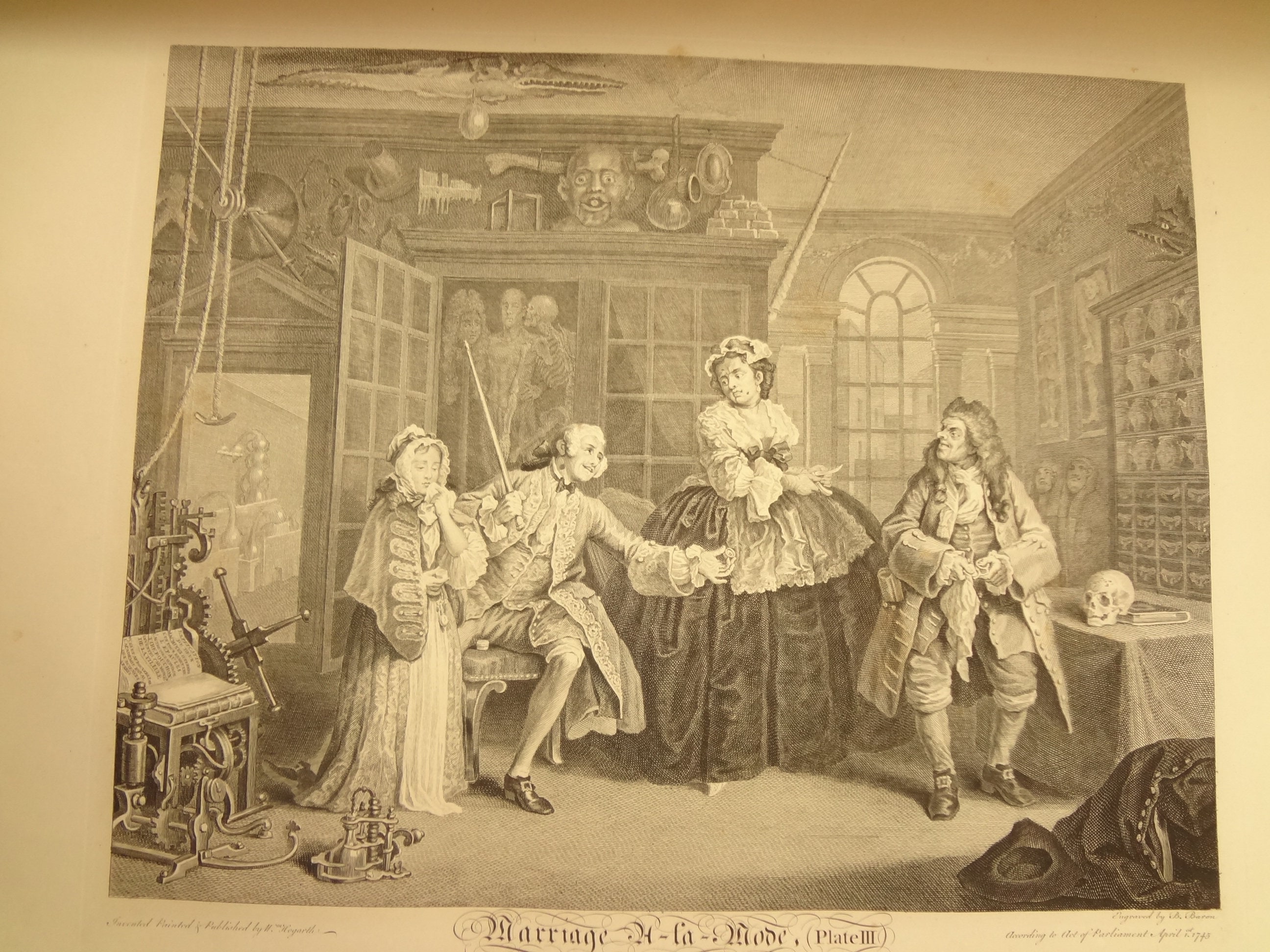 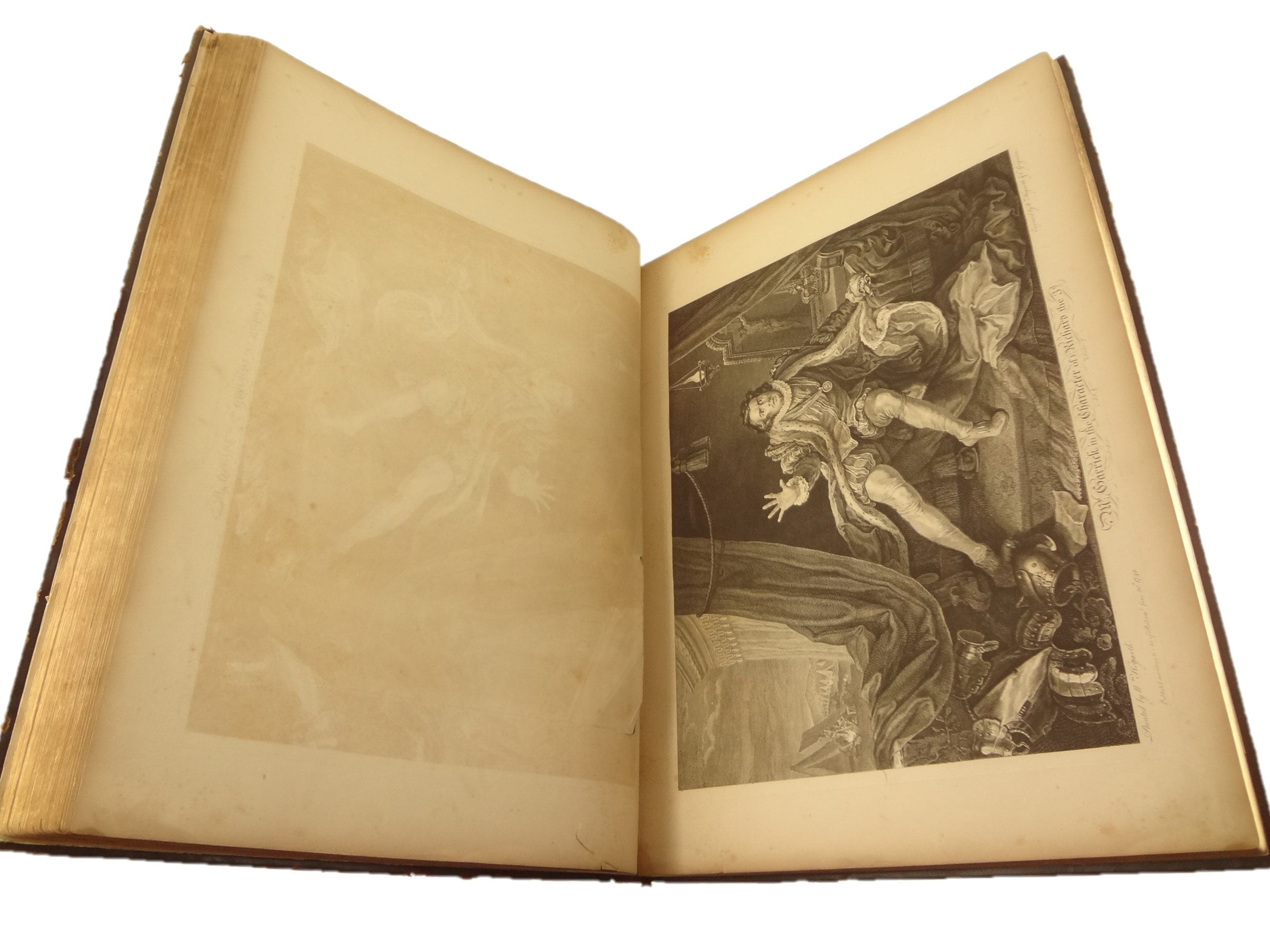 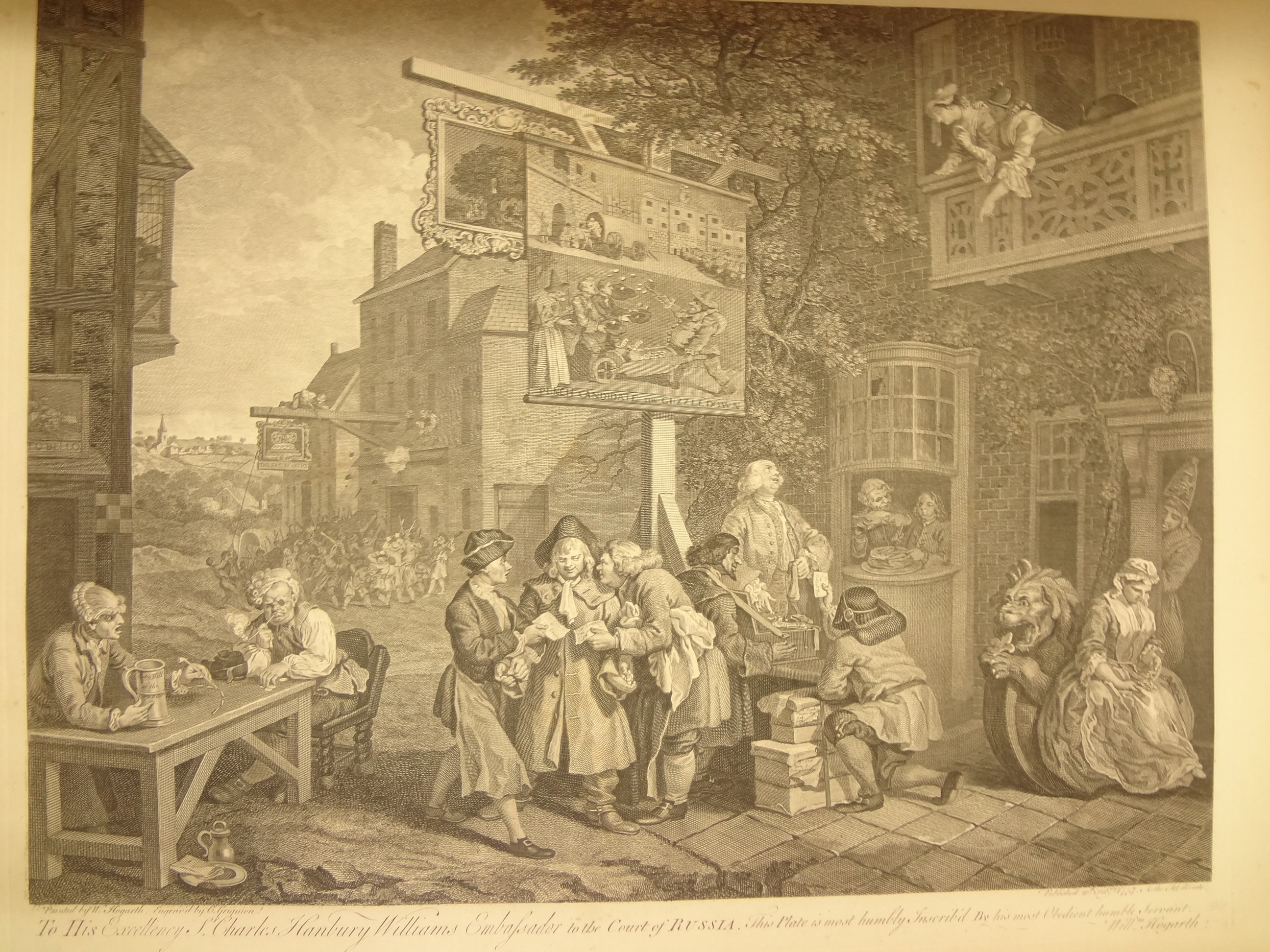 Atlas folio (circa 1840) The Works of William Hogarth from the Original Plates... Baldwin and Cradock, London.

Bibliographies record that the original Hogarth plates were at the printer's, Baldwin and Cradock, to produce this impressive work. (p. 188, William Hogarth, Austin Dobson, 1898)

This copy is well-worn, and missing five called-for plates (per the index); and likely three "suppressed plates" that bibliographies record being in an envelope at the rear. Still, 110 leaves remain (of 118 leaves).

This work was first printed in 1822, by Baldwin, Cradock and Joy. It was later reprinted, and Joy was dropped from the publisher's name; this copy is from this later edition. While no date is on the reprint title page, bibliographies place it between 1837 (a date on one of the plates) and 1848 (when a copy appears in Bohn's catalogue). Earlier bibliographers didn't have access to scanned Google Books and I found several advertisements earlier than 1848, placing the date of printing closer to 1837.

The 1822 edition had 119 plates. This later edition had three "suppressed plates" at the rear (per bibliographies and Worldcat catalogue entries), and 115 plates listed, adding up to 118 plates total; the three plates at the rear were probably trumped-up as suppressed for this later edition to aid sales (this is pure speculation) as the total number of plates remained nearly the same.

William Hogarth (1697 – 1764) was an English painter, engraver, pictorial satirist, social critic, editorial cartoonist and occasional writer on art. His work ranges from realistic portraiture to comic strip-like series of pictures called "modern moral subjects", and he is perhaps best known for his series A Harlot's Progress, A Rake's Progress and Marriage A-la-Mode. Knowledge of his work is so pervasive that satirical political illustrations in this style are often referred to as "Hogarthian".

Hogarth was born in London to a lower-middle-class family. In his youth he took up an apprenticeship with an engraver, but did not complete the apprenticeship. His father underwent periods of mixed fortune, and was at one time imprisoned in lieu of outstanding debts, an event that is thought to have informed William's paintings and prints with a hard edge.

Influenced by French and Italian painting and engraving, Hogarth's works are mostly satirical caricatures, sometimes bawdily sexual, mostly of the first rank of realistic portraiture. They became widely popular and mass-produced via prints in his lifetime, and he was by far the most significant English artist of his generation. Charles Lamb deemed Hogarth's images to be books, filled with "the teeming, fruitful, suggestive meaning of words. Other pictures we look at; his pictures we read."

Notes on the Binding -

This copy is unique in that it was bound in full-leather for the owner William Buckingham III (his name in gilt at base of spine). Most of the copies are 3/4 leather, and that was probably how they were issued; the reference to a folder of suppressed leaves at the rear indicates that the binding was already on the book when it was sold.

William Buckingham III and his wife Ethel (her calling card tucked inside) resided on Vernon Pl. in Cleveland Ohio at the turn-of-the-century.

Missing five listed plates, and three "suppressed plates" that bibliographies record being added in a folder at the rear binding.

Listed plates from index that are missing:

Measures approx. 66.75 x 49.25 x 4.75 cm. Leather binding. Boards with frame of gilt decoration; double gilt fillets on outside, leafy sprays in the center, corner florets. Spine with six raised bands; five compartments with a central gilt floret, one compartment with "Hogarth" in gilt. "William Burlingham III" at base of spine in gilt. Leather doublures as pastedowns.

See pictures. Wear to binding, with edge and corner wear, rubs. etc. Joints/hinges tender, with some cracking. Chipping at head and tail of spine.

Missing five called-for plates, and probably three "suppressed" plates that would be found in original issue (in a pocket at rear); see missing plates list in description.

Some dust at gutter. Toned and thumbed throughout. Many page edge chips.

Almost all pages have 2-4" tears from bottom-edge, near the gutter, a result of turning the large leaves.

Some foxing throughout and occasional small black spots. There is an approx. 1" moisture mark at bottom of gutter, no printing affected. Occasional damp stain from bottom-edge in margin.

Moisture mark at gutter margin in rear index of plates.

No "suppressed plates", bibliographies note these three were in a folder at the rear of the original release; no mention in index or title page though.

Price reflects condition. A desirable edition, pleasing in its large size and reprinting of the original plates, but this copy likely resided in an attic (or similar) for a long period of time and now the paper is a little brittle, a handful of plates were taken, and the binding isn't perfect. Still, handsome and fun to look through. Still 110 plates of Hogarth, many almost completely filling the Atlas Folio sized leaves.