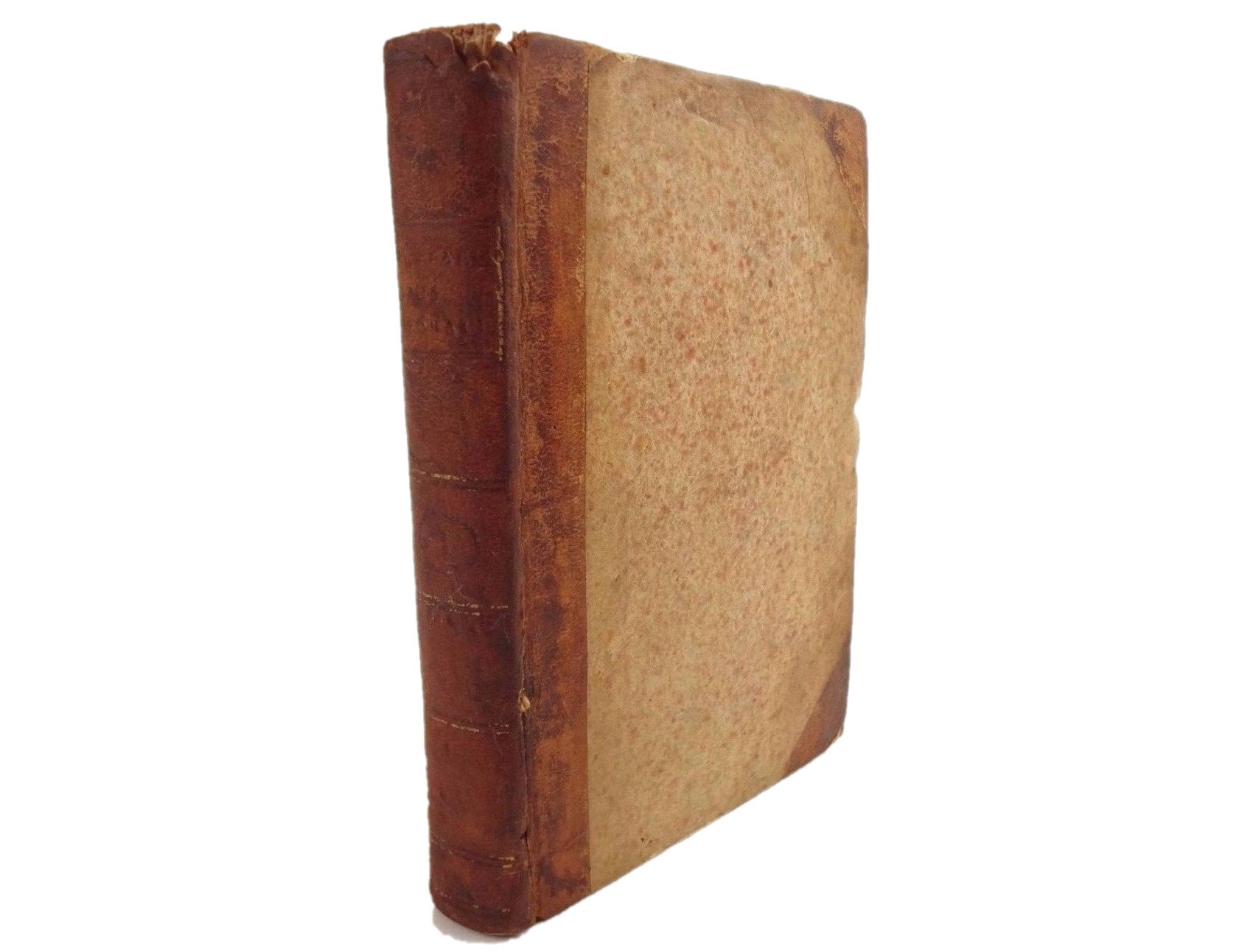 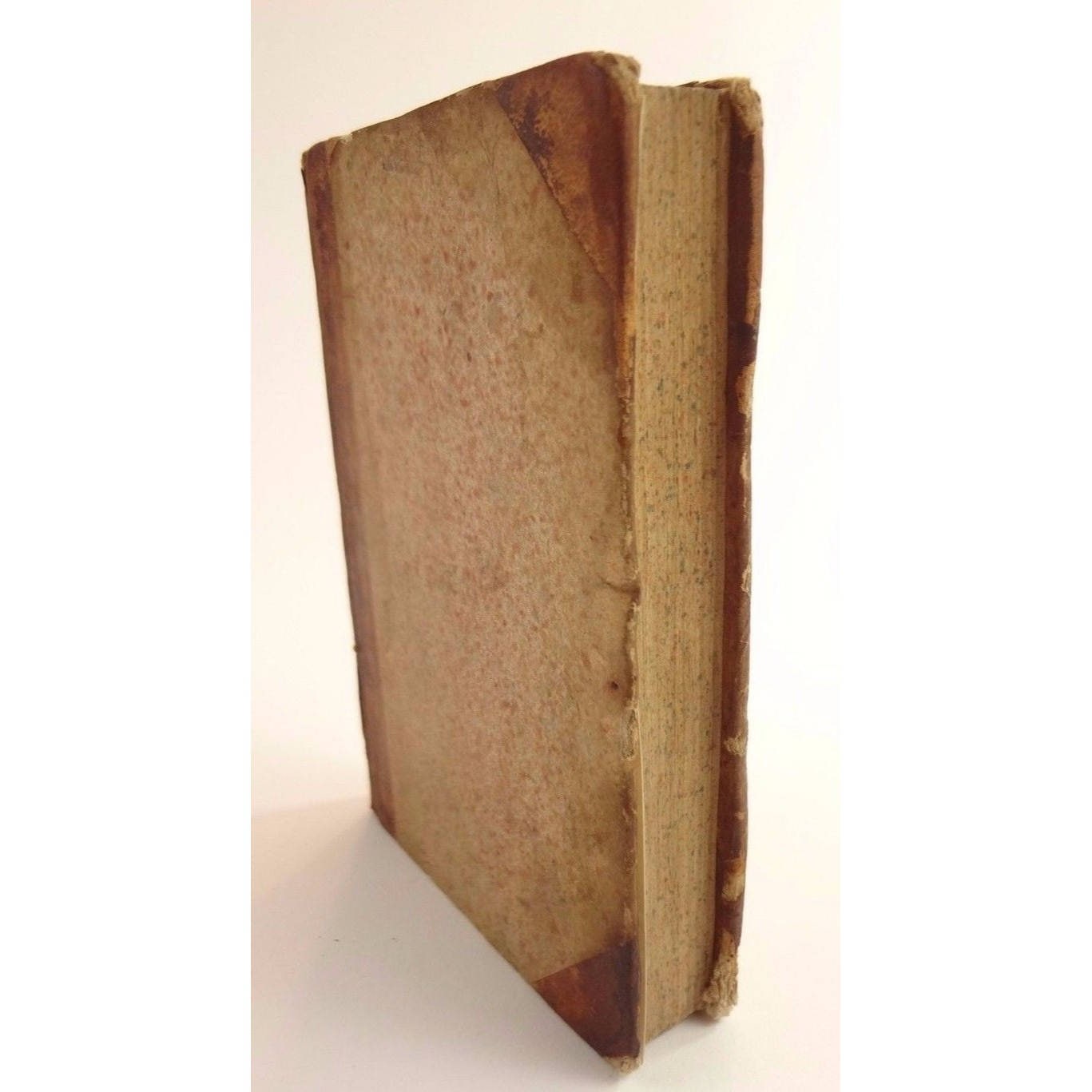 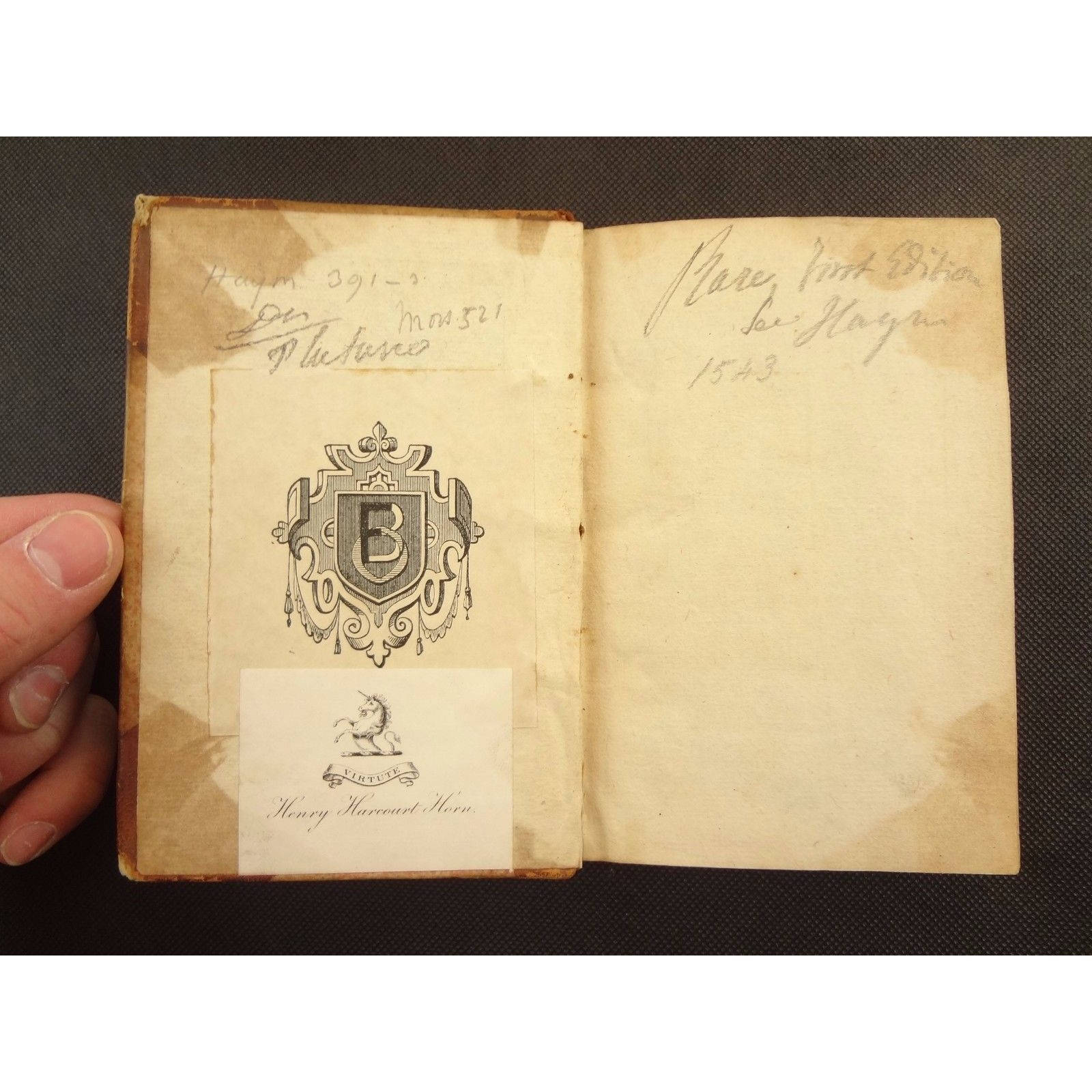 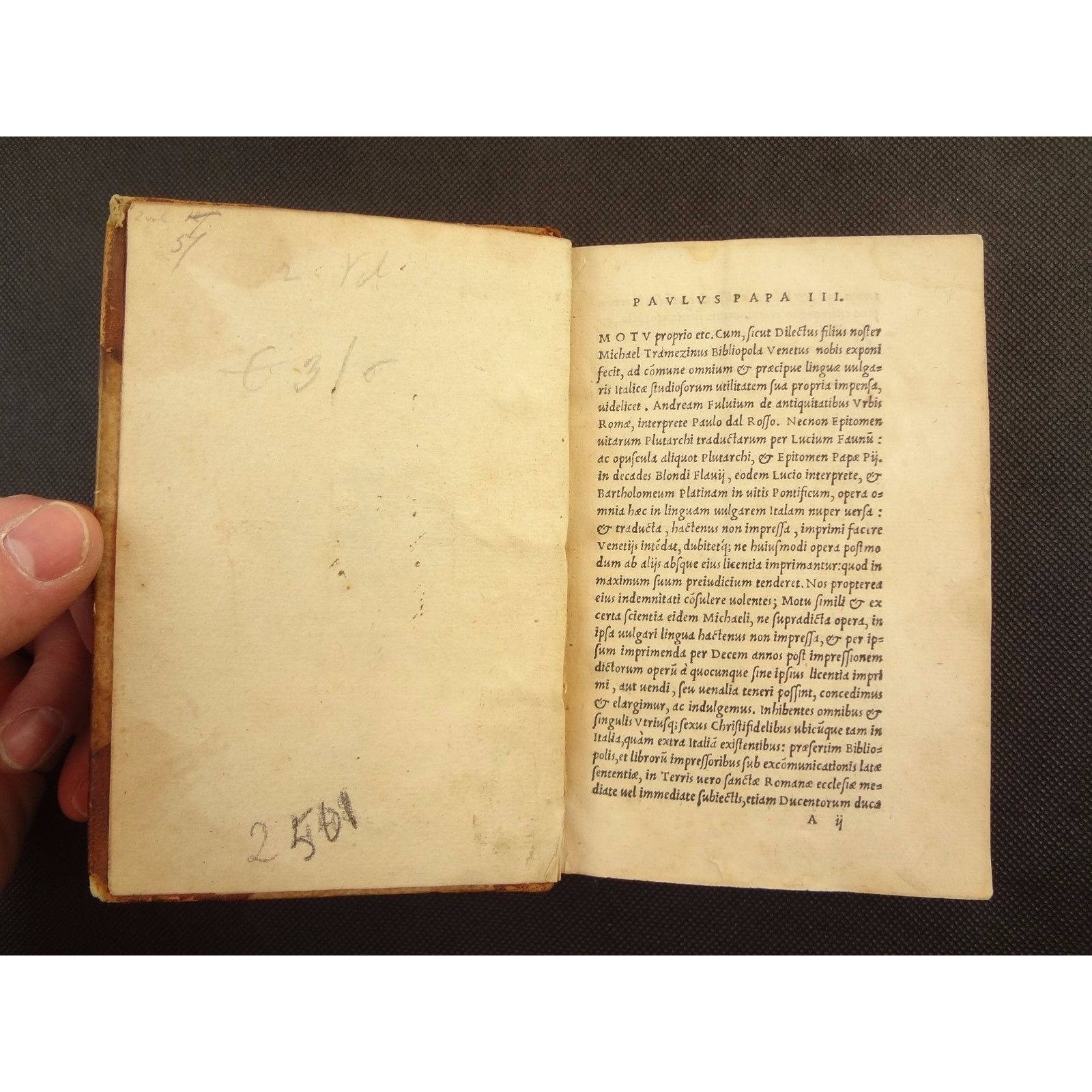 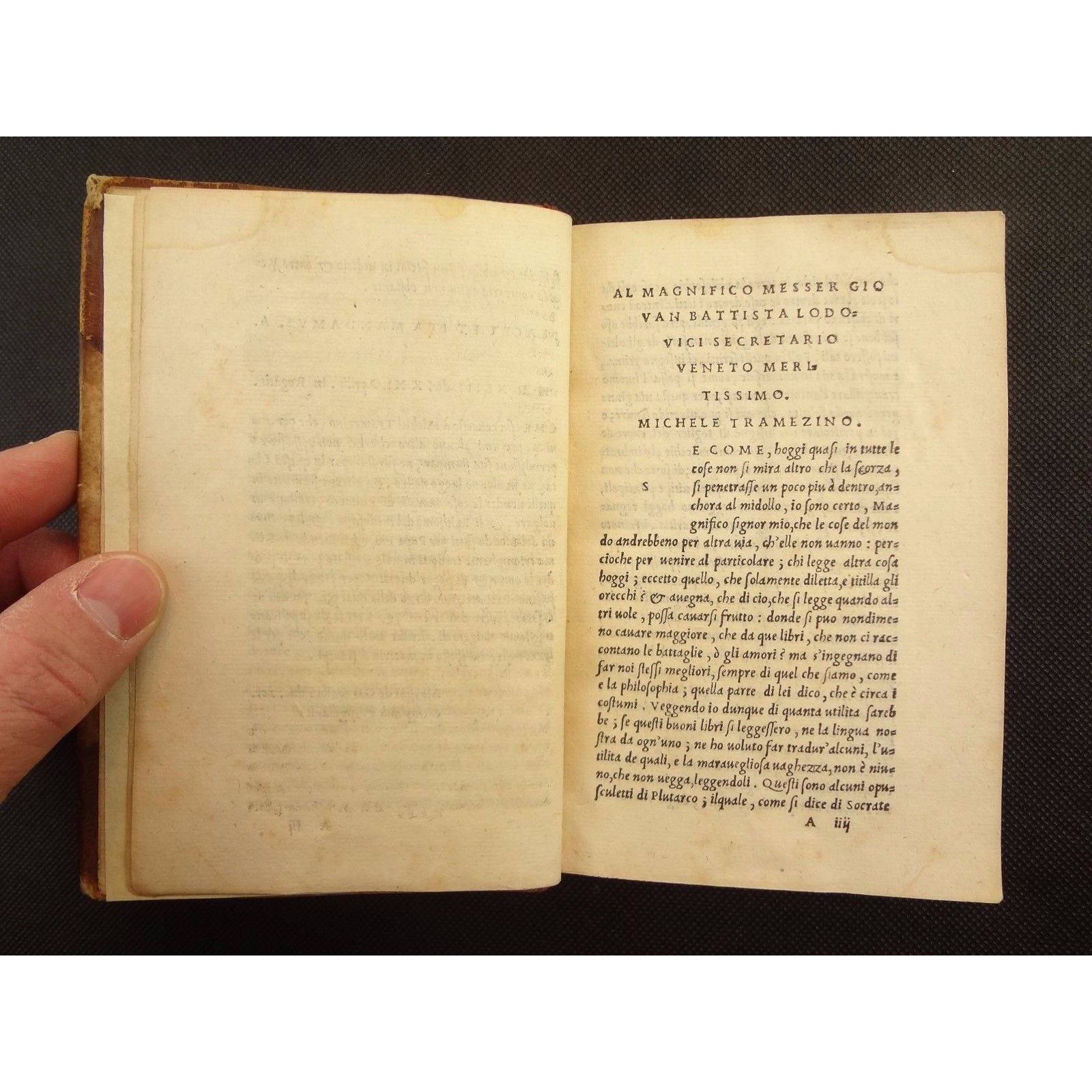 An early Italian translation of a miscellany of Plutarch's Moralia. In 1543 this printer Tramezino (Venice) produced the 1st vulgar translation, this is his 2nd edition and rare (at the time of this listing I can't find a 1549 edition on the market). With interesting American provenance (see "Provenance" below).

From a 2 volume set, this book is volume 1 and includes ten works from the Moralia including:

1. The tranquility and security of the soul

2. On the Love of Wealth

4. On Virtue and Vice

5. How to Know a Friend from a Flatterer

6. How to Profit by One's Enemies

7. How to Bring up Children

8. Fruit of the Virtuous & Good

10. How to Keep in Good Health

Plutarch was a Greek historian, biographer, and essayist, known primarily for his Parallel Lives and Moralia. He is classified as a Middle Platonist. Moralia is an eclectic collection of seventy-eight essays and transcribed speeches.

I can't find the match for the lower bookplate, but the unicorn bookplate belongs to the author Henry Harcourt Horn, who wrote the autobiographical An English Colony in Iowa.

The Horn House, in Decorah Iowa is on the National Register of Historic Places. "The house was built by Henry Harcourt Horn, a native of Hertfordshire who was part of the English Colony in the Decorah area. The colony was established in the early 1860s, principally by well-to-do Englishmen who tried to become gentleman farmers. Most of them, including Horn, failed. Horn moved into Decorah and tried his hand in a variety of businesses. He had to file for bankruptcy and lost his house in a sheriff's sale. He relocated to St. Paul, Minnesota where he took up a law career." - Wikipedia

See pictures. Shelf wear, with chipping around the edges of the boards, exposing pasteboard (especially at bottom corner), and some rubbing. Chipping at top and bottom of spine but endbands in place. Some joint cracking but not entirely cracked. Front board has two small indents along fore-edge.

Front endpaper has a number of bookseller notes (several times stating that this was in Haym's) and two ex libris bookplates. Mistaken note that this is the first edition, it is not. It is the second edition of 1549.

Title page was missing, I found a copy and printed it on acid free paper and include it loose, not tipped-in. You can see this printed title page in the pictures.

There is a water mark in the top margin (not affecting text) from A1-A8. There are two bottom margin watermarks (one at gutter) from pages P6 to T4. Lastly one last watermark from X7 to end, this one goes up into lower text but it is light. Light yellowing and sporadic foxing throughout. Annotations throughout, in old hand and trimmed with binding. 1/4 leather foxed endpapers.