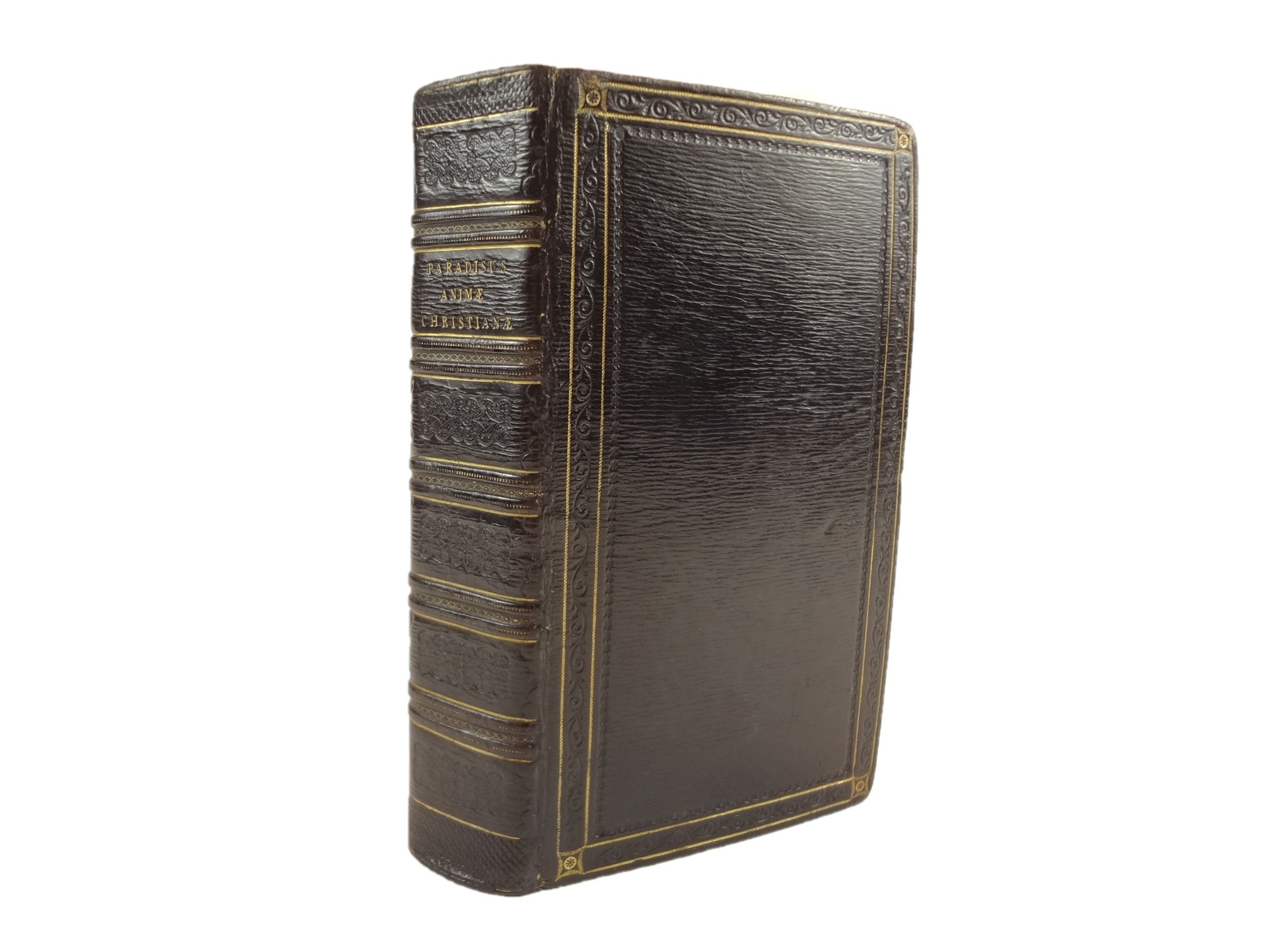 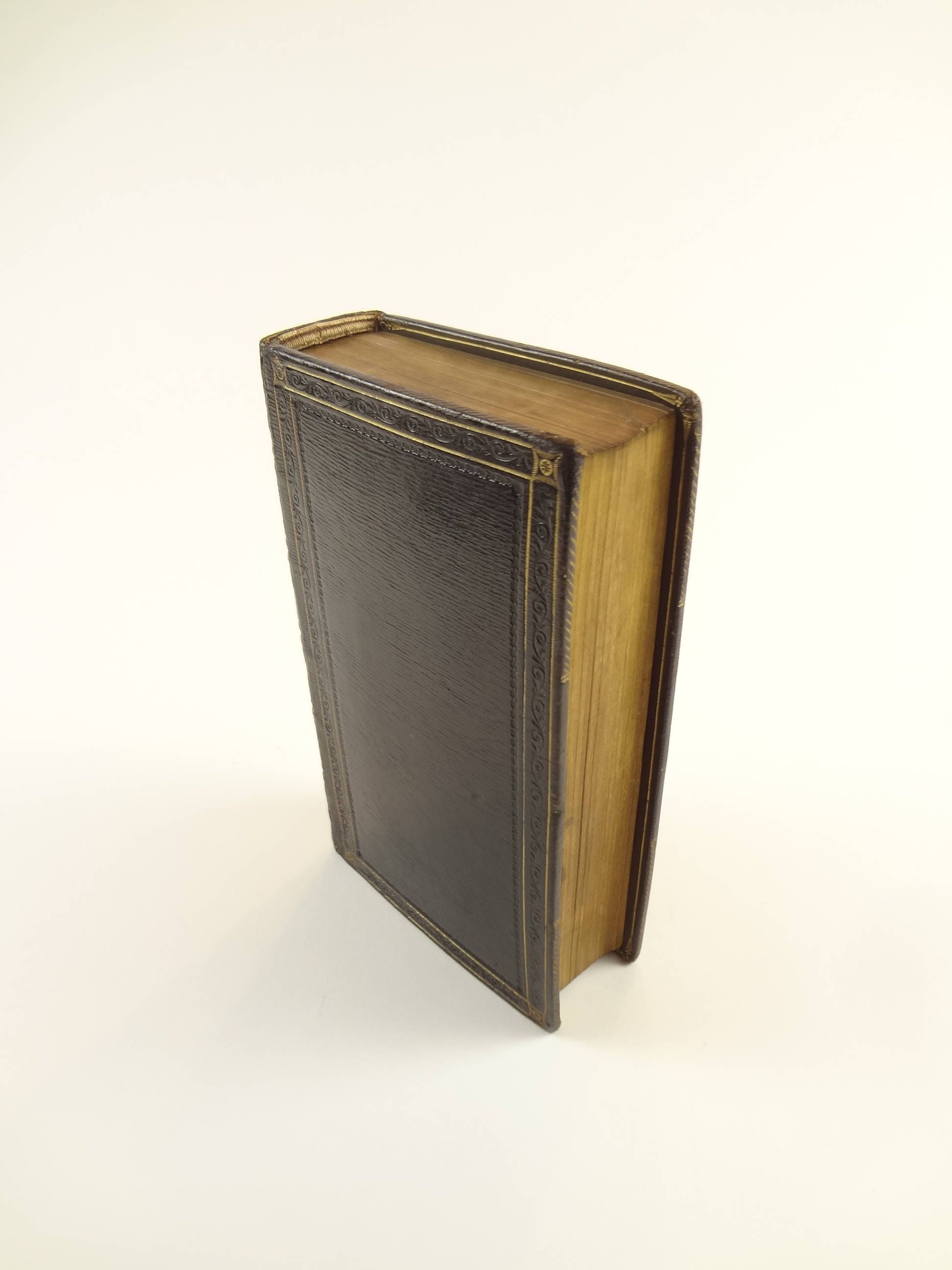 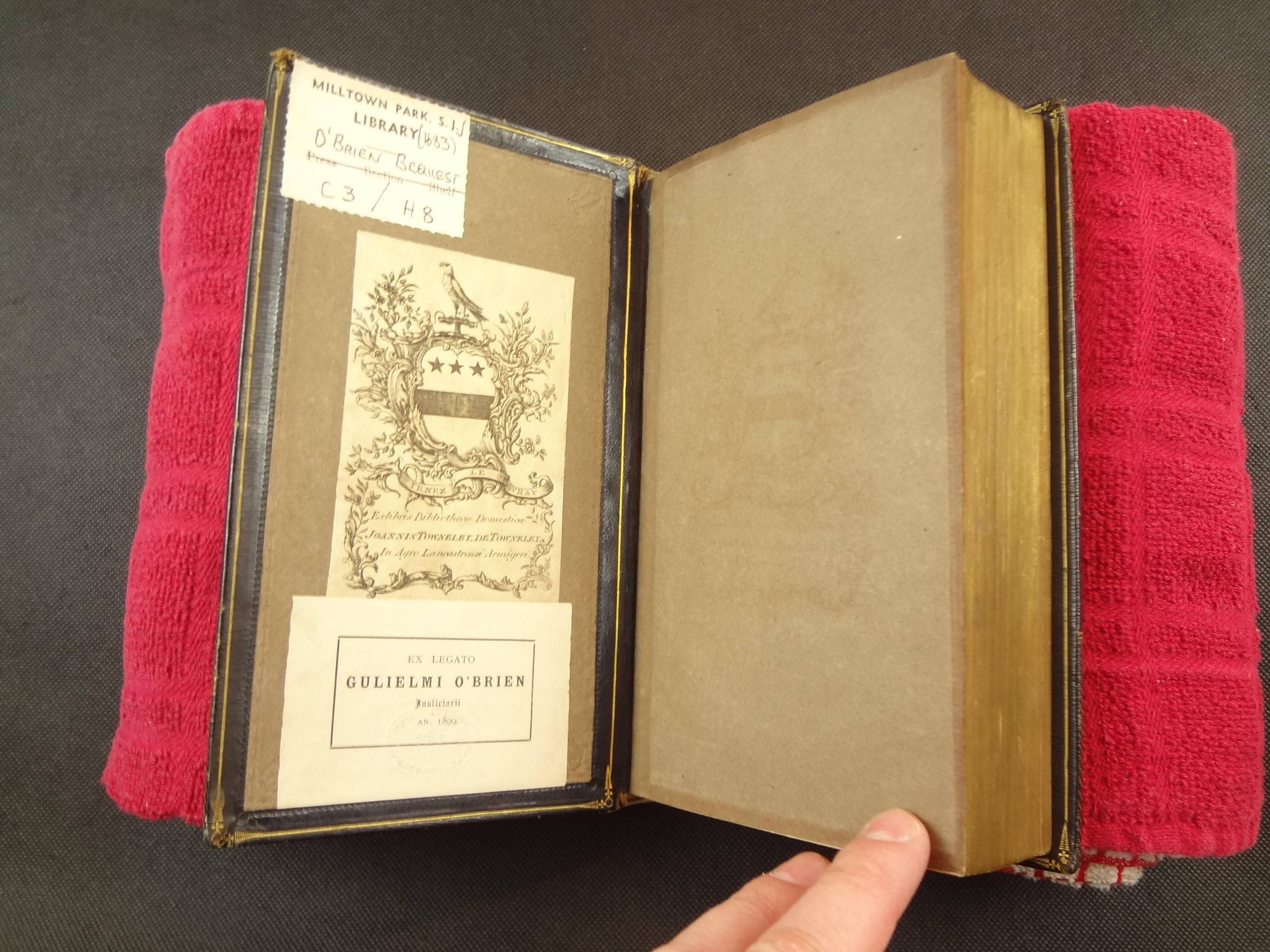 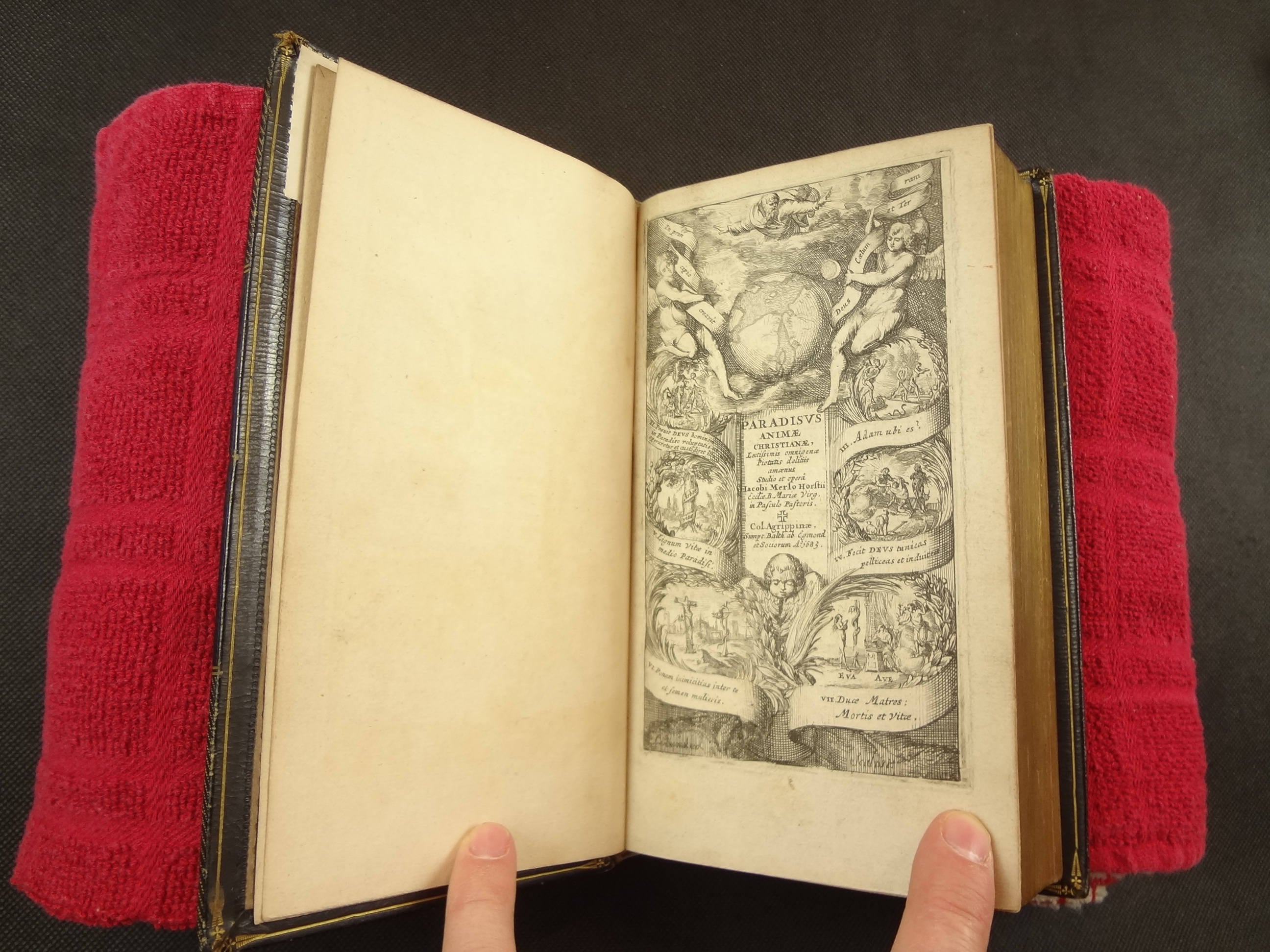 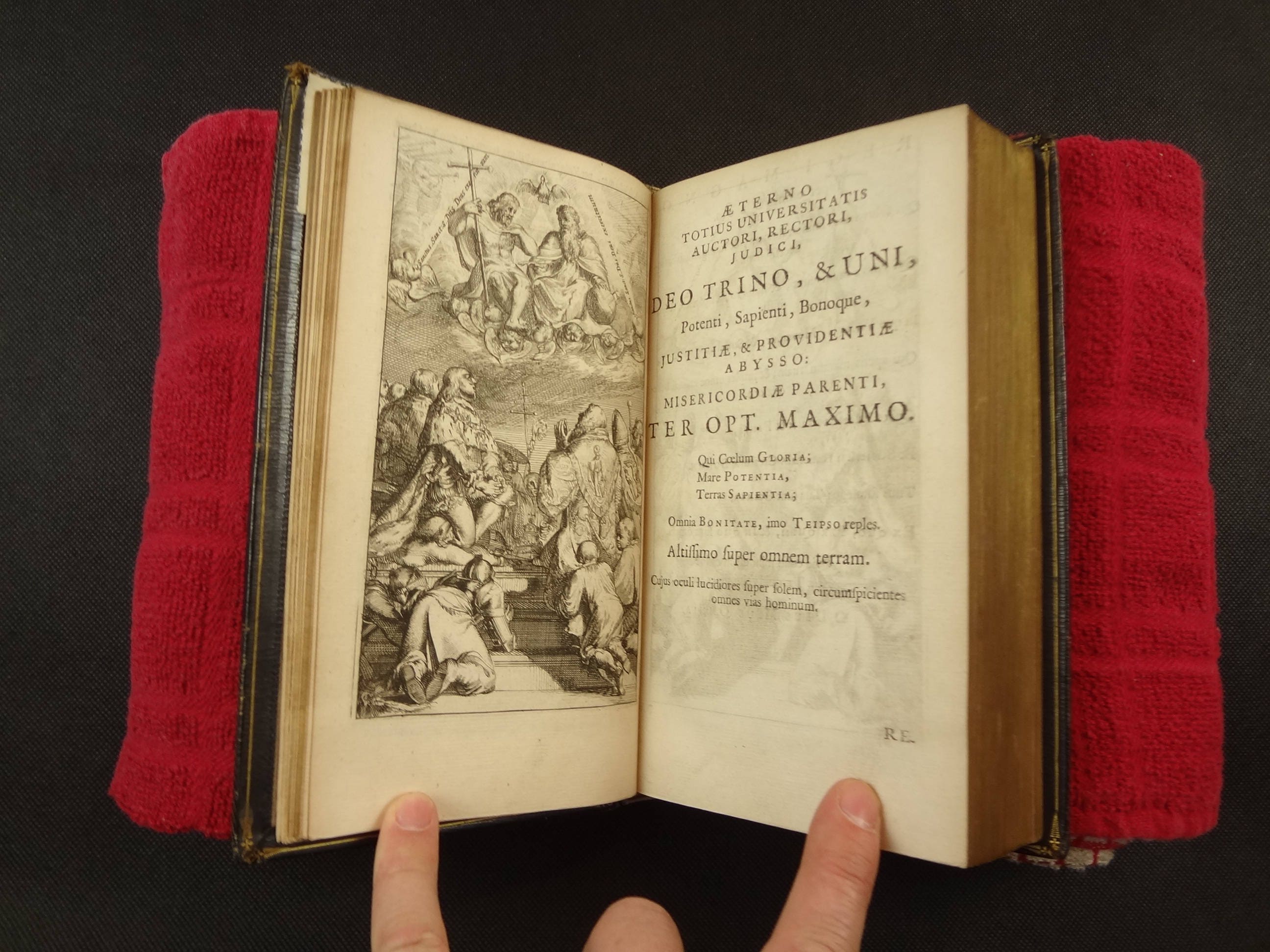 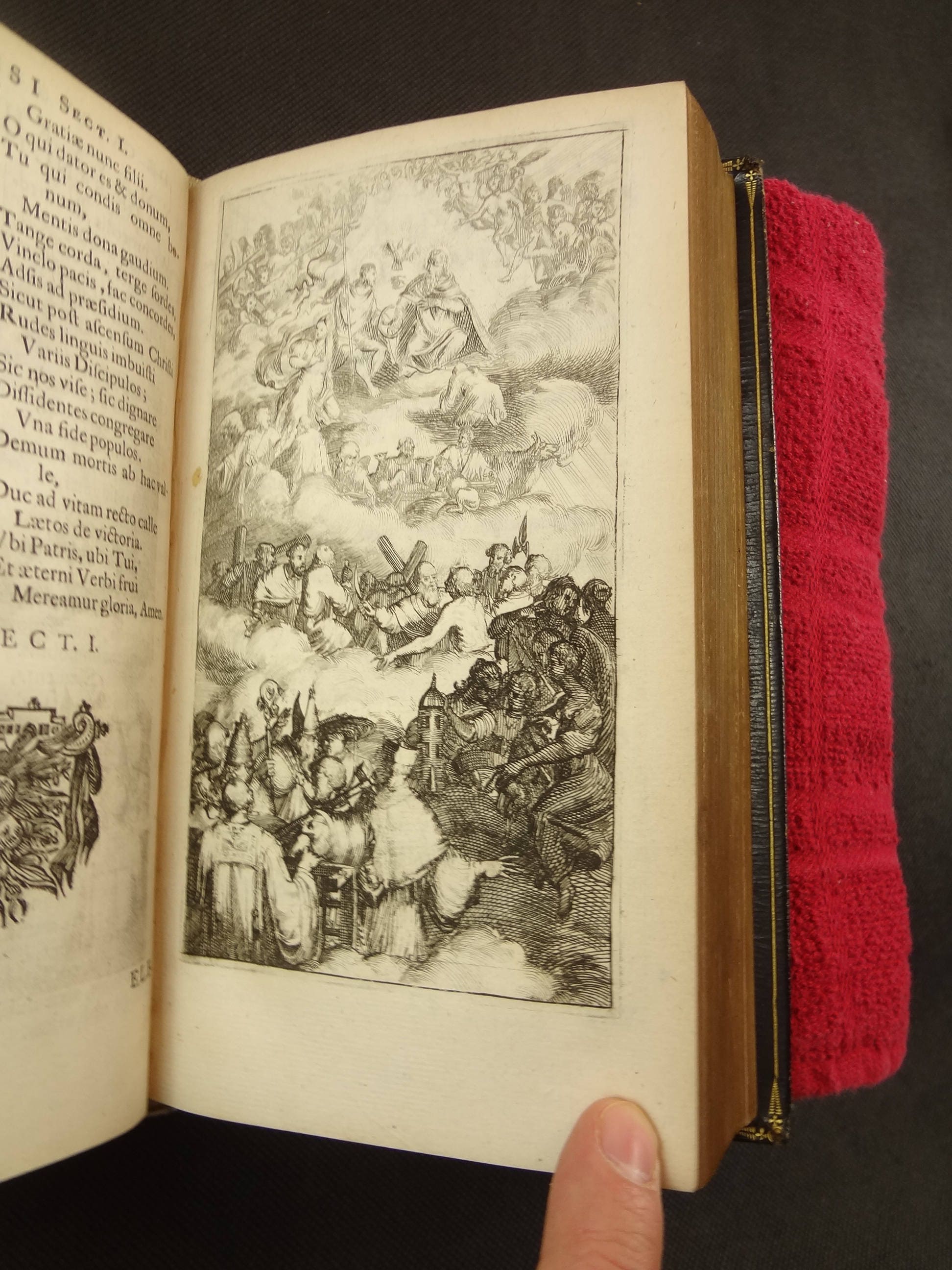 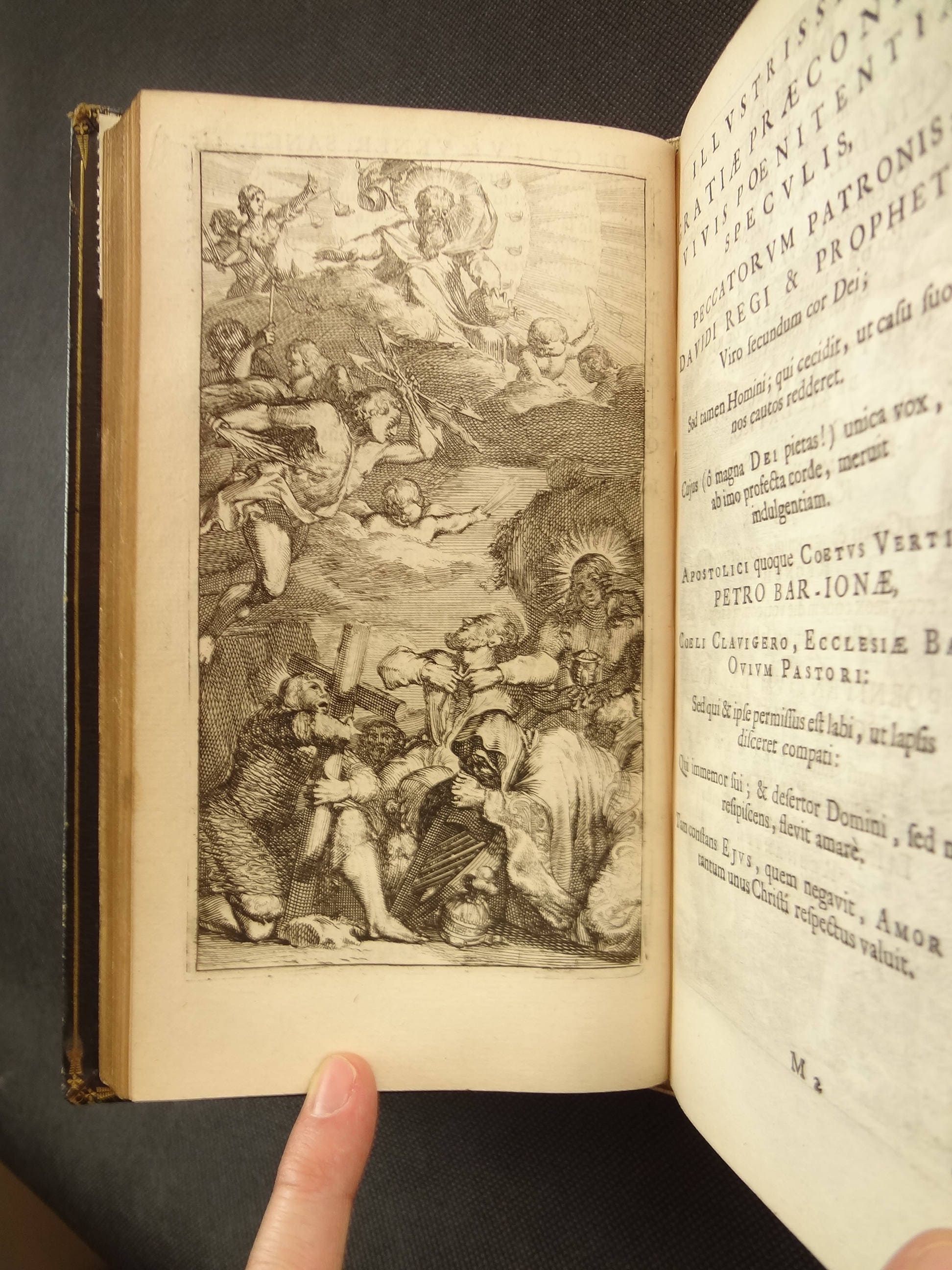 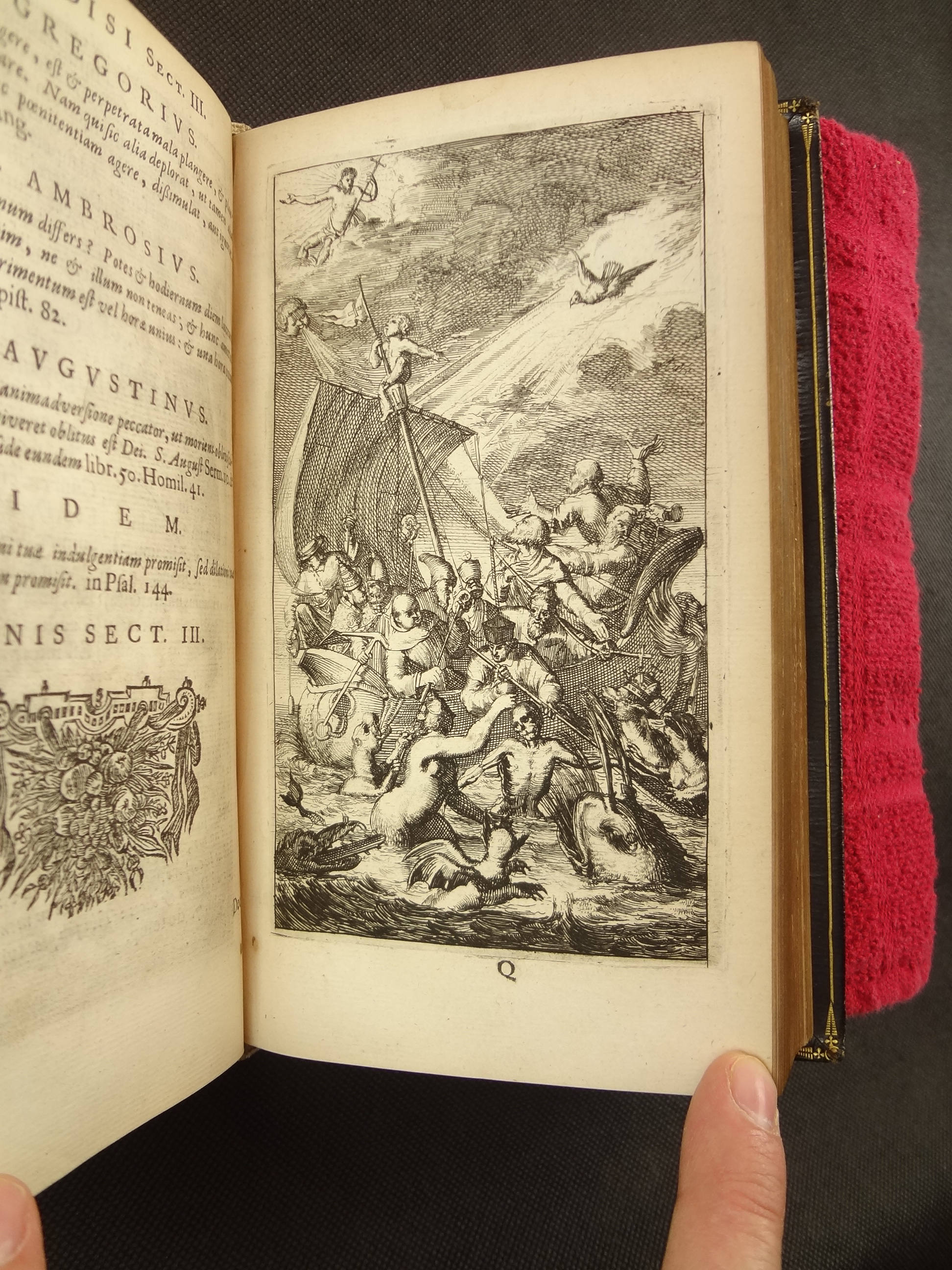 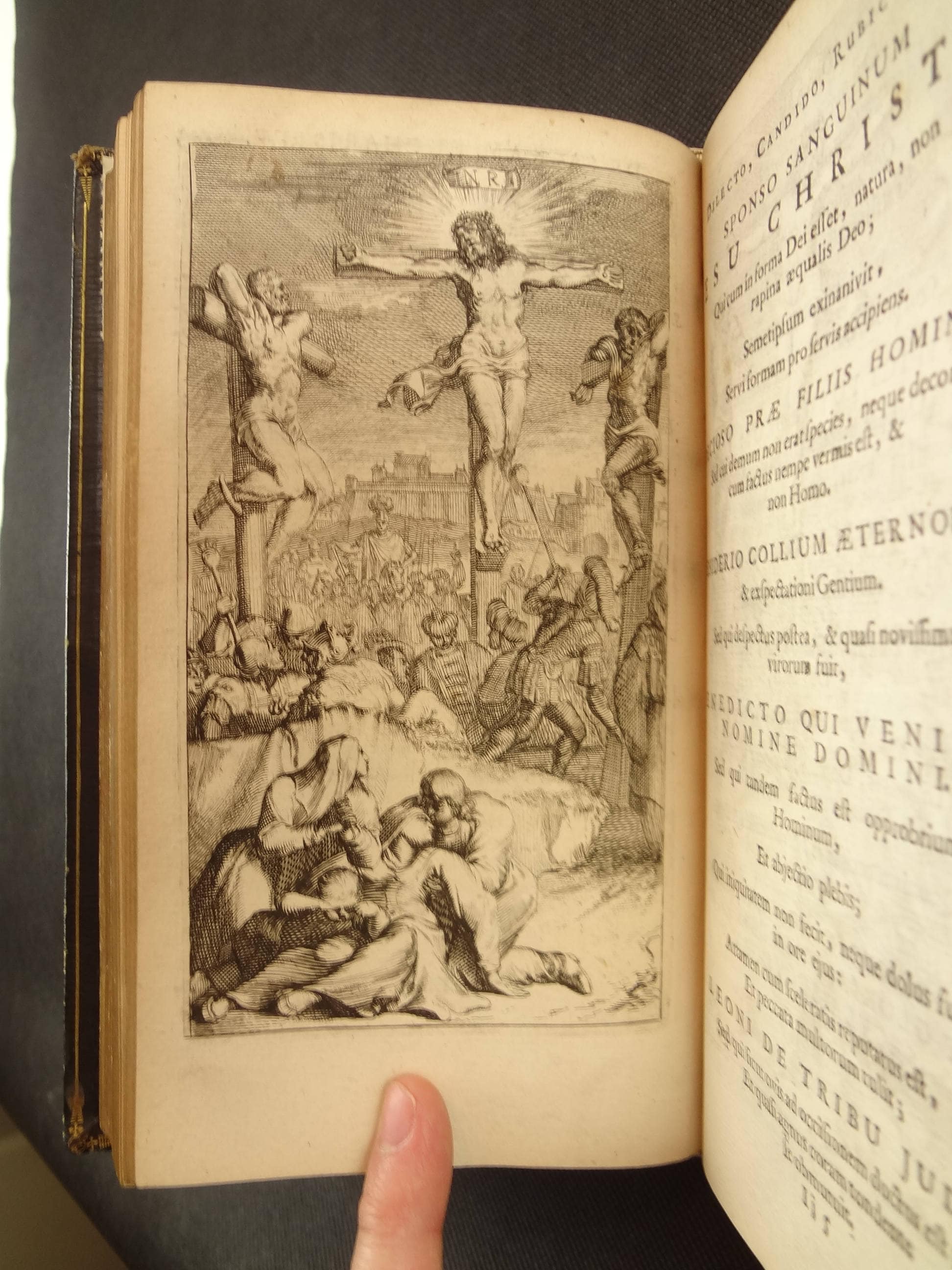 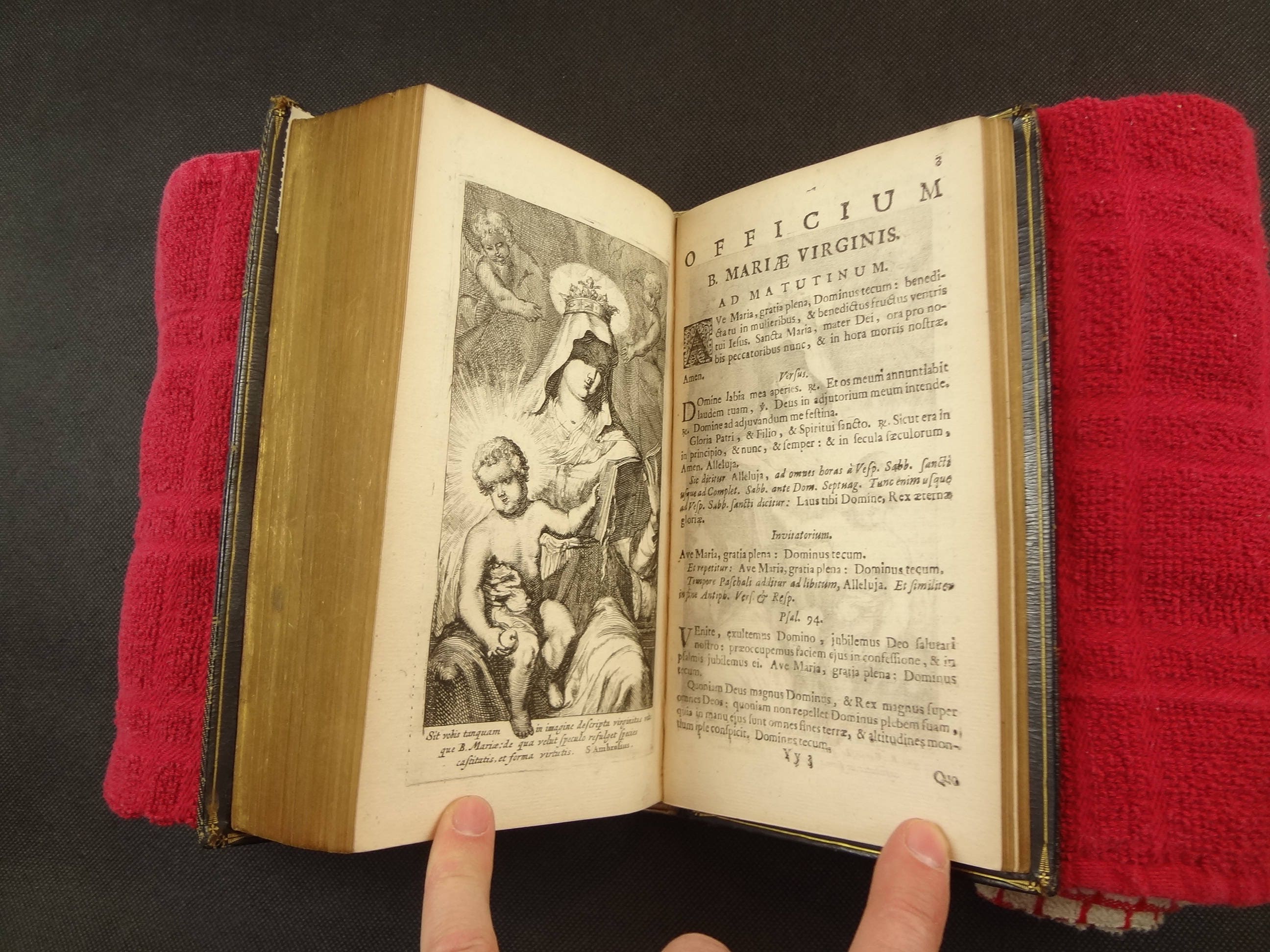 The finest copy of this work on the market, with a handsome early 19th century straight-grain Morocco leather binding and three centuries of provenance in important libraries. Beautifully illustrated.

The work is in seven sections, each describing a portion of the Christian life, and each having a striking frontis engraving. Lastly, to the rear of the work, there is a wonderful Manuale Pietatis in quo Officium B. Mariae Virgin (Office of Mary) with another beautiful frontis (numbered as a separate work, but the printing signatures reveal it is from the same printing).

Priest at the Lyskirchen in Cologne, Horstius is the author of several of ascetical works and also applied himself to editing other works.

Provenance of the Book -

The bookplates over two hundred years of provenance in noted libraries. The late 18th century/early 19th century English collector John Townseley's book plate is the earliest. It was likely Townseley who had the book bound based on the style. Secondly, the book plate of the judge William O'Brien (most famous for presiding over the Phoenix Park murders in 1882) is extant; his collection largely went to the Jesuits at Mill Town, whose bookplate is also found (they also applied the lone "c" to the title page). Just recently the Jesuits released many of their antiquarian books for sale through Sotheby's, stating they'd seen very little use in their one hundred years of holding them.

Octavo, measuring 20 x 12 x 5 cm. Black straight-grain Morocco leather binding with blind and gilt board border tooling (including a frame on the turn-ins. Five raised spines (double) with fillet tool bordering the ribs, dots applied to the ribs, and blind tooling applied to the compartments, one compartment contains the title in gilt. Triple endband design. Leather joint at the gutter of the endpapers provides a doublure like effect, pastedowns were blind tooled in the style of a doublure. All edges are gilt.

Engravings - I believe they are copperplate engravings. There is one frontis to the book as a whole, one to each of the seven sections, and one to the frontis of the Office of Mary.

See pictures. A little wear to boards, corners a little pushed. Top endband cracked in middle. Bookplates on paste down. "C" on title page ("cataloged" per the Jesuits), does not affect the text. Mostly clean and bright pages. At the last 80 pages there is a light tide mark at the bottom of the text block, and for ten of those pages there is a black mark at bottom of page (not in text); it appears a small blot of ink occurred and was cleaned. Mostly a very handsome and clean work.