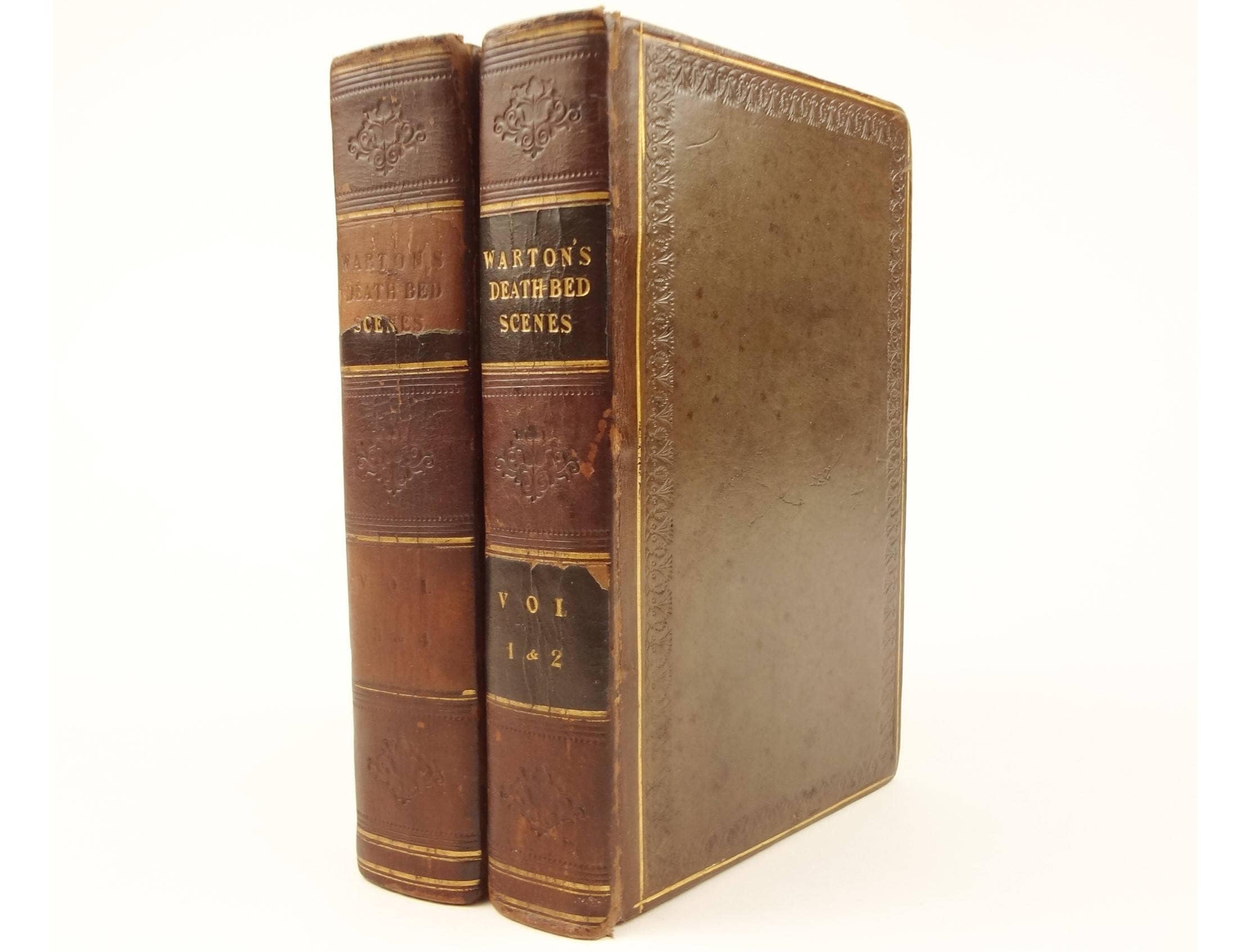 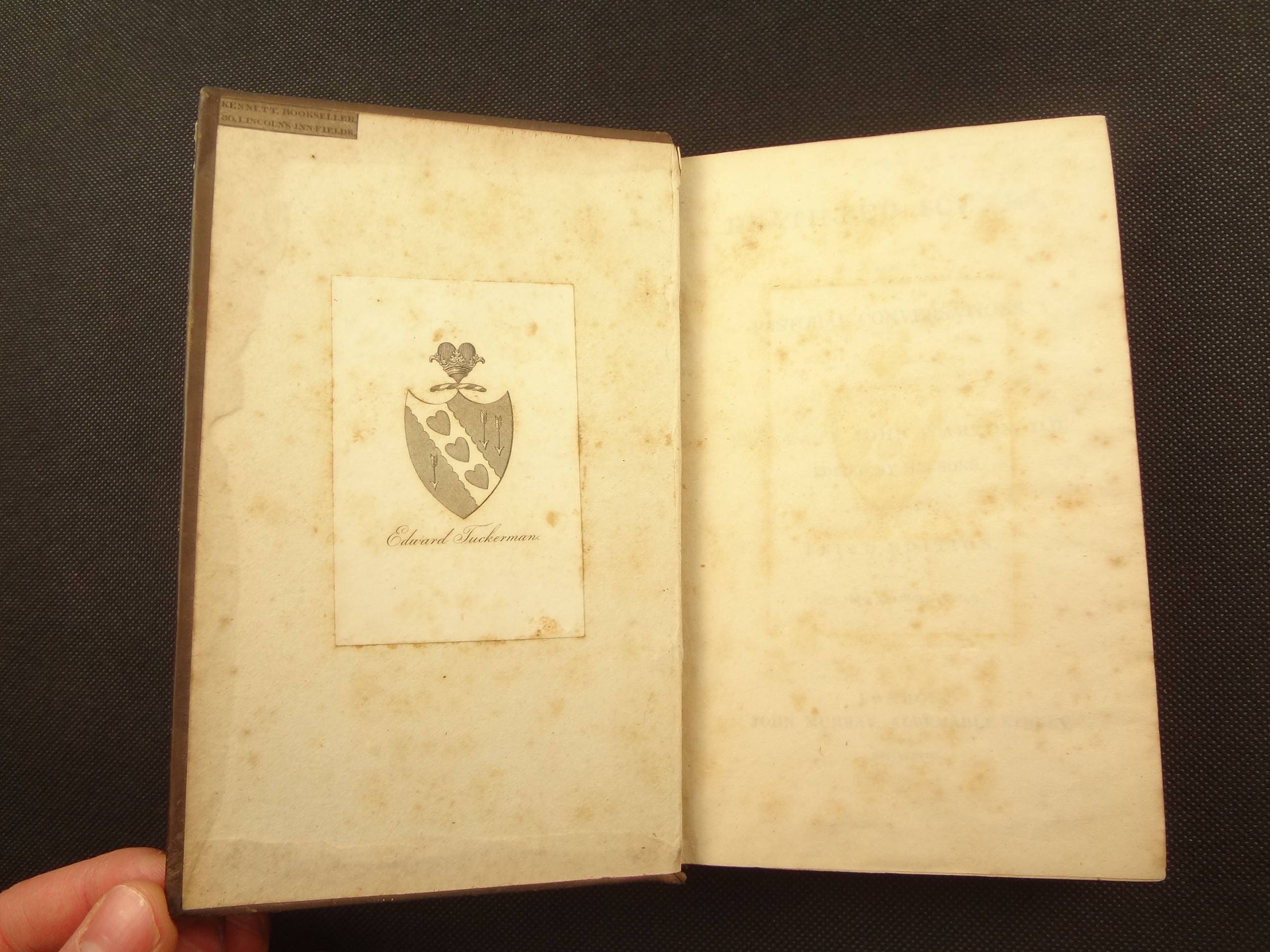 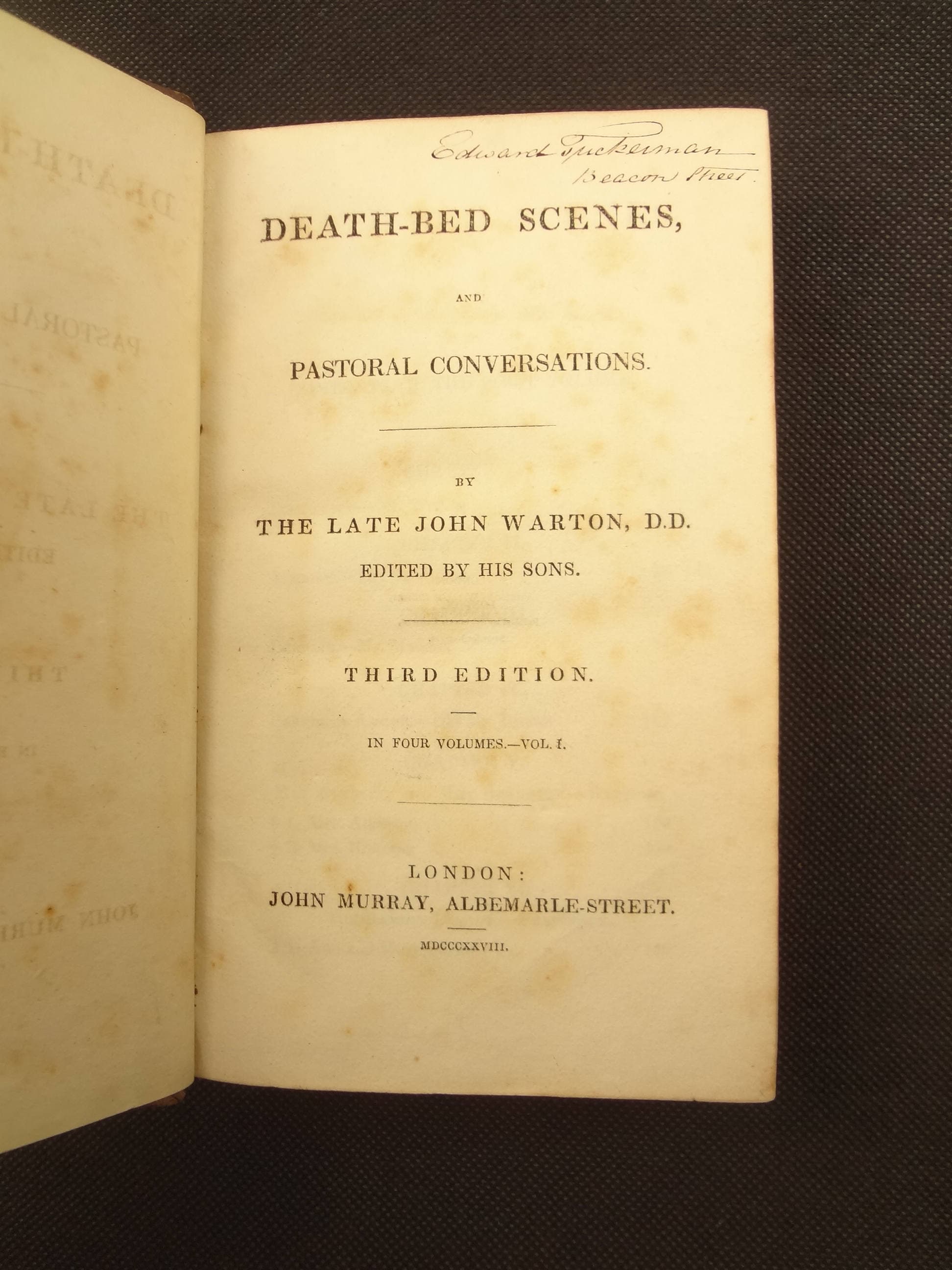 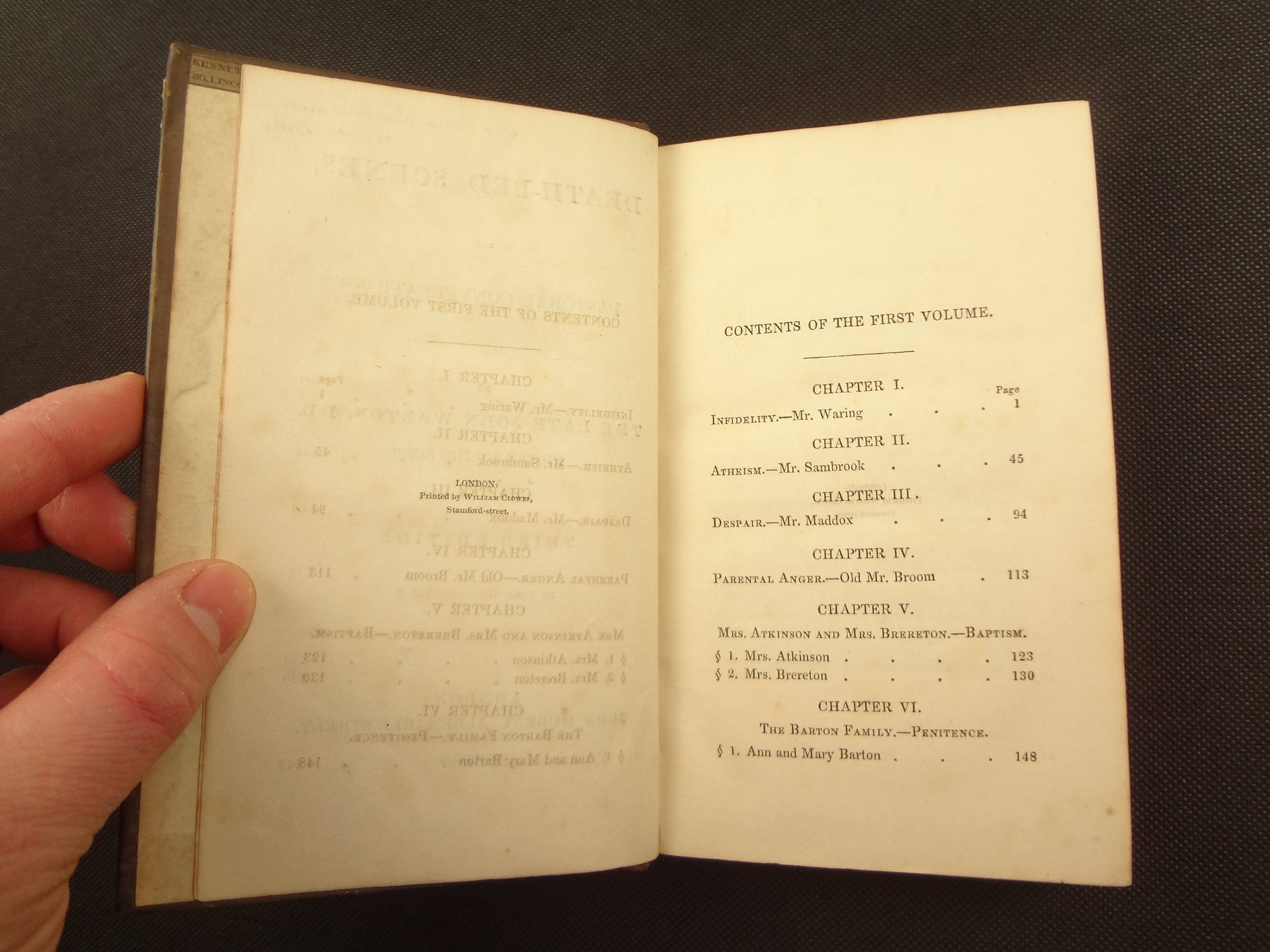 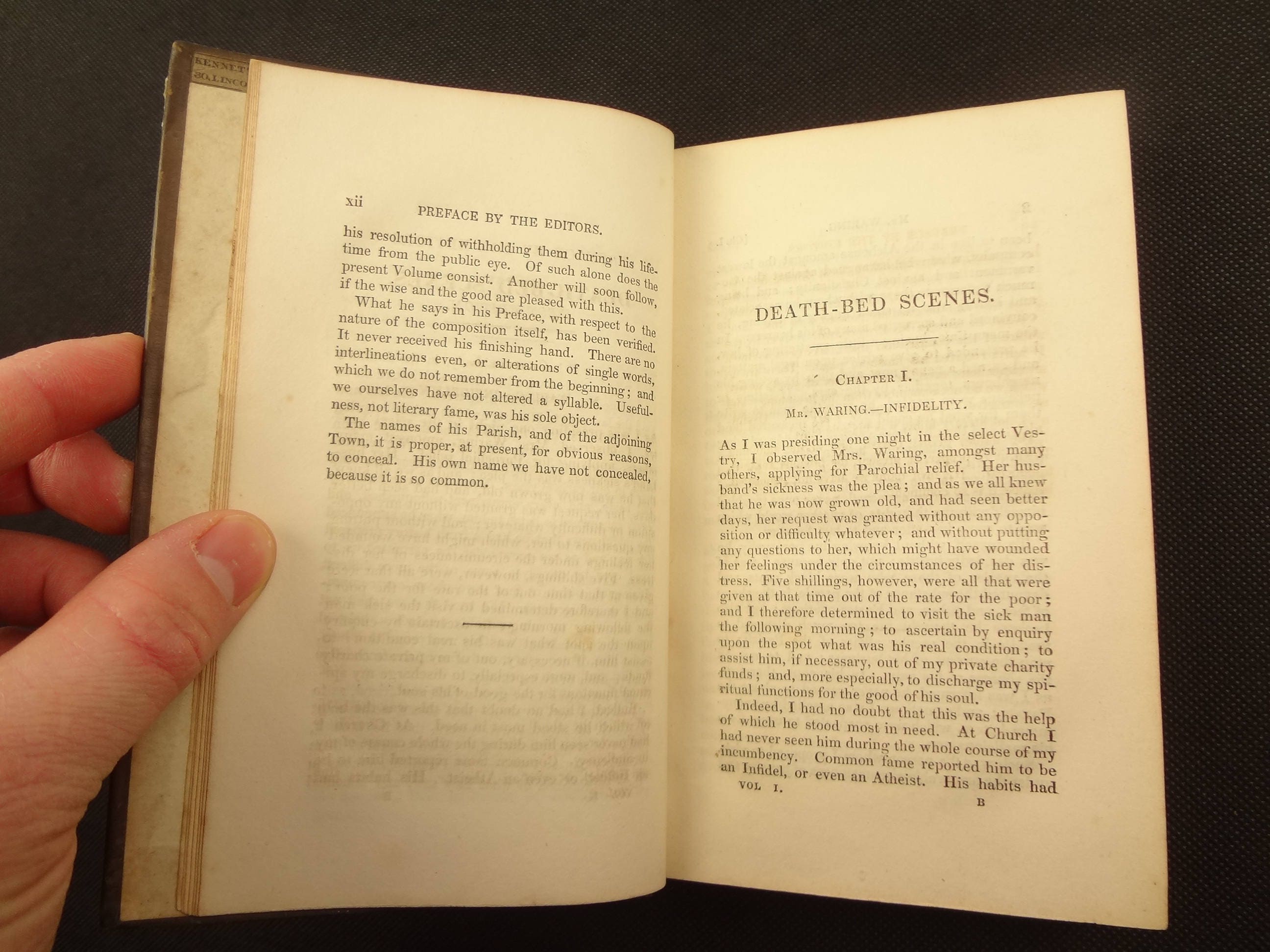 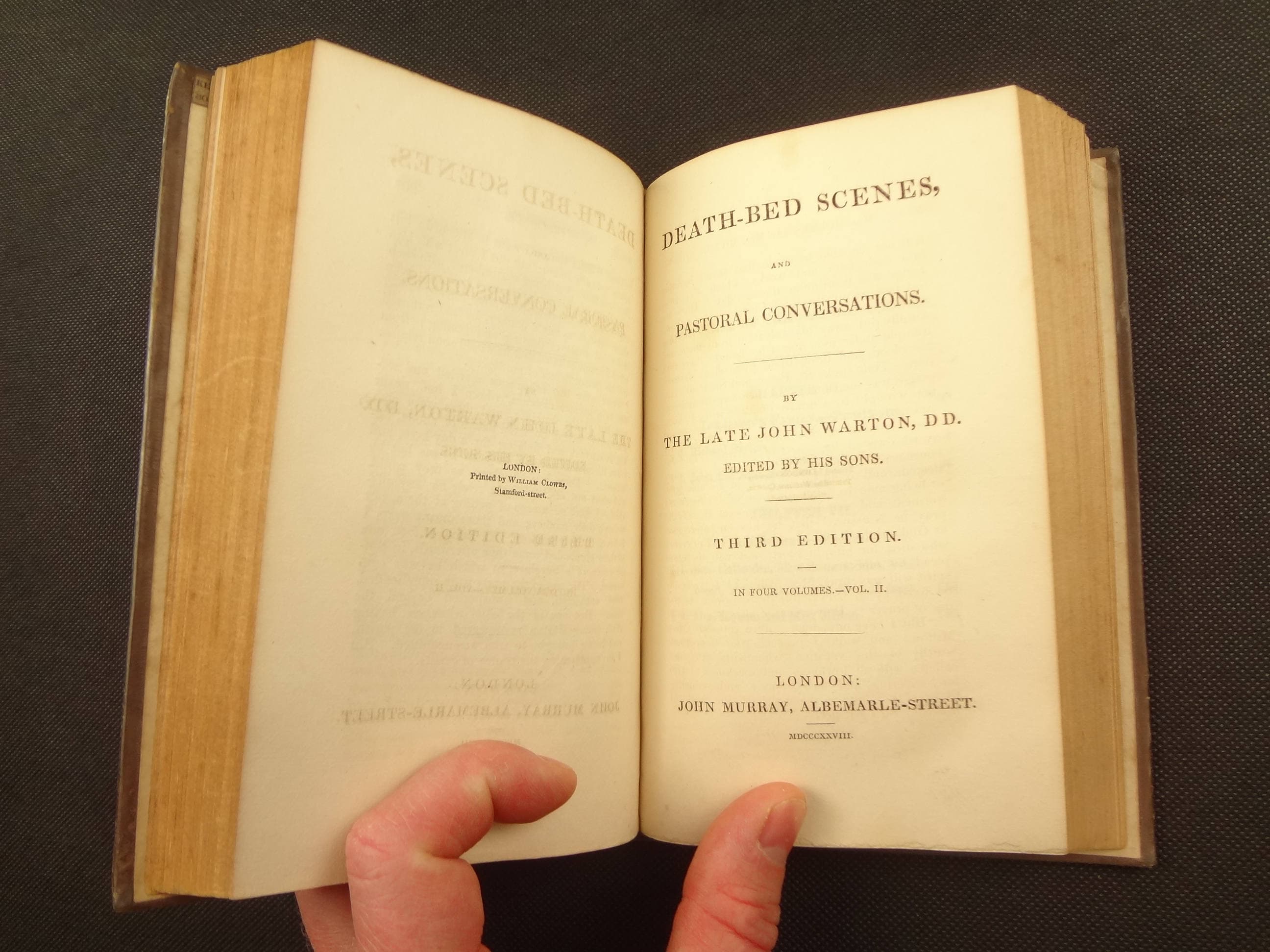 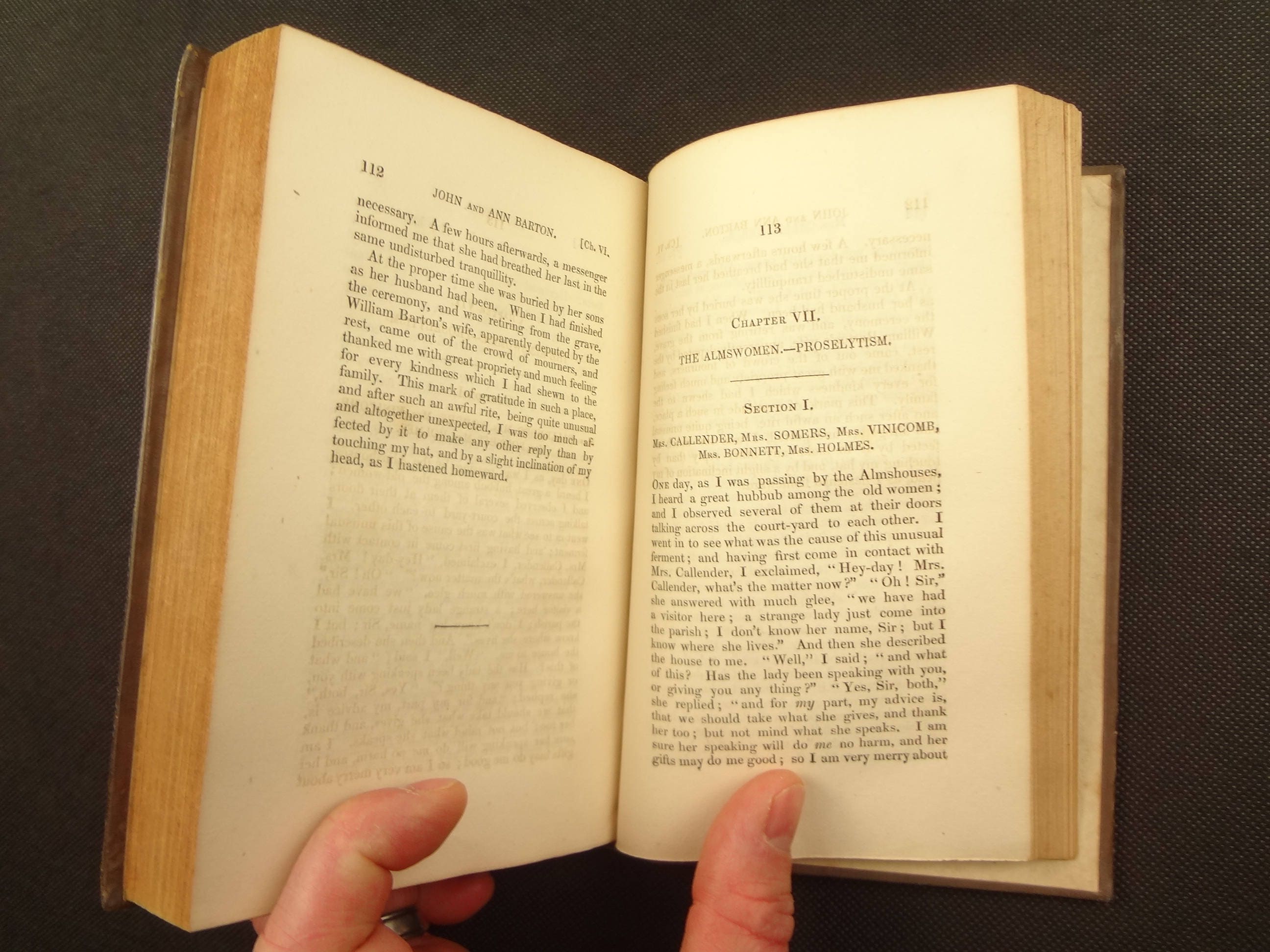 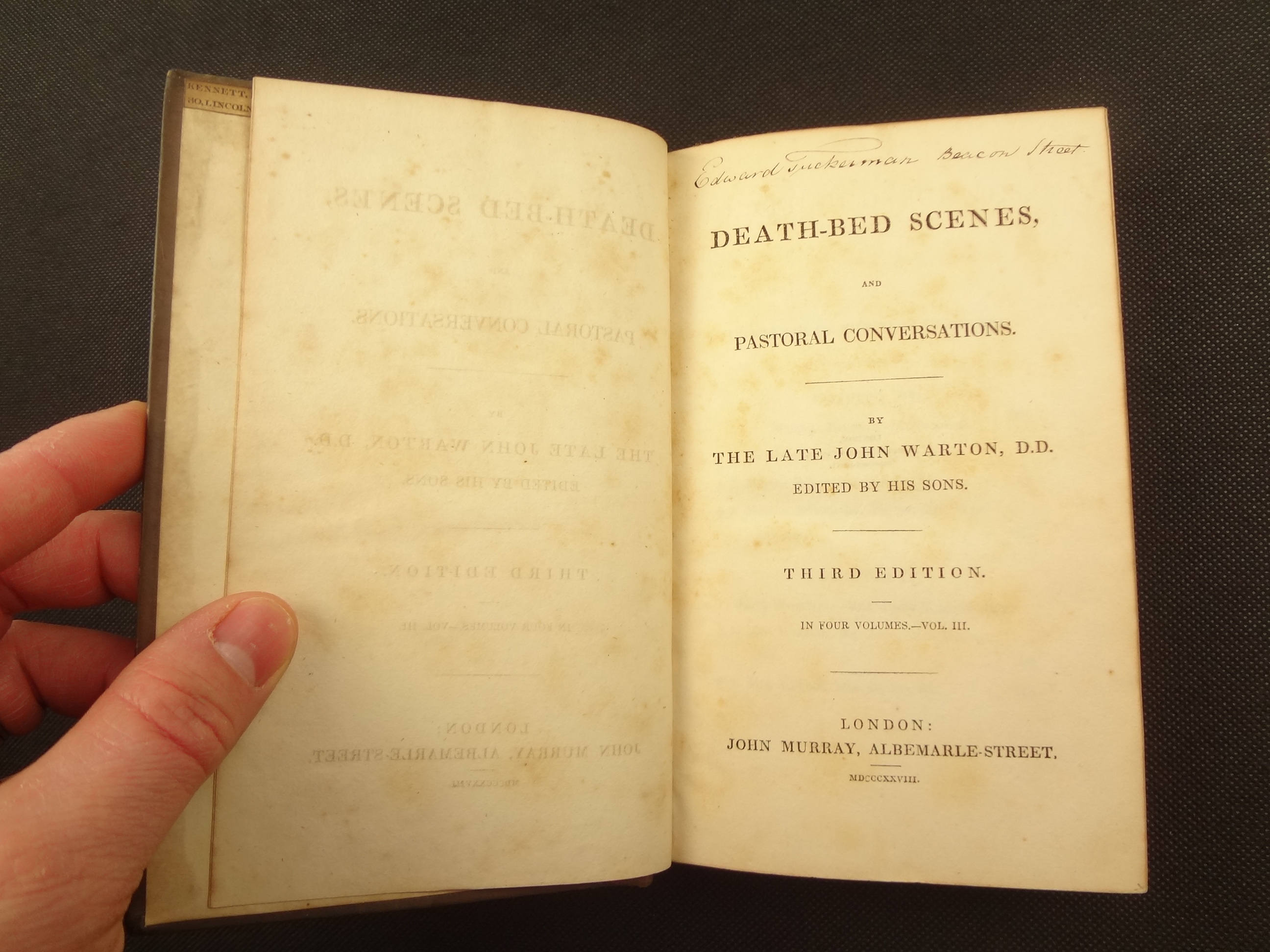 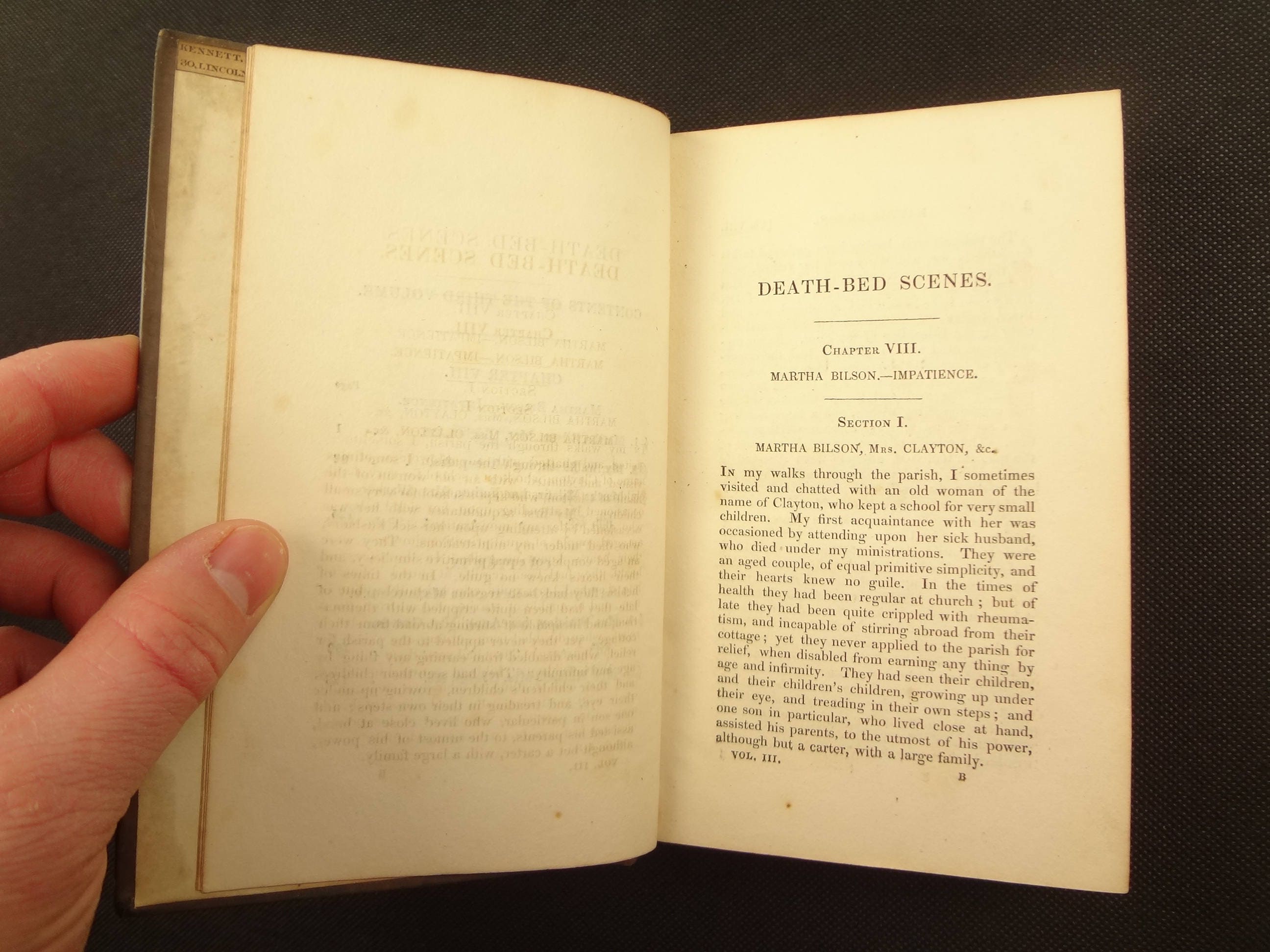 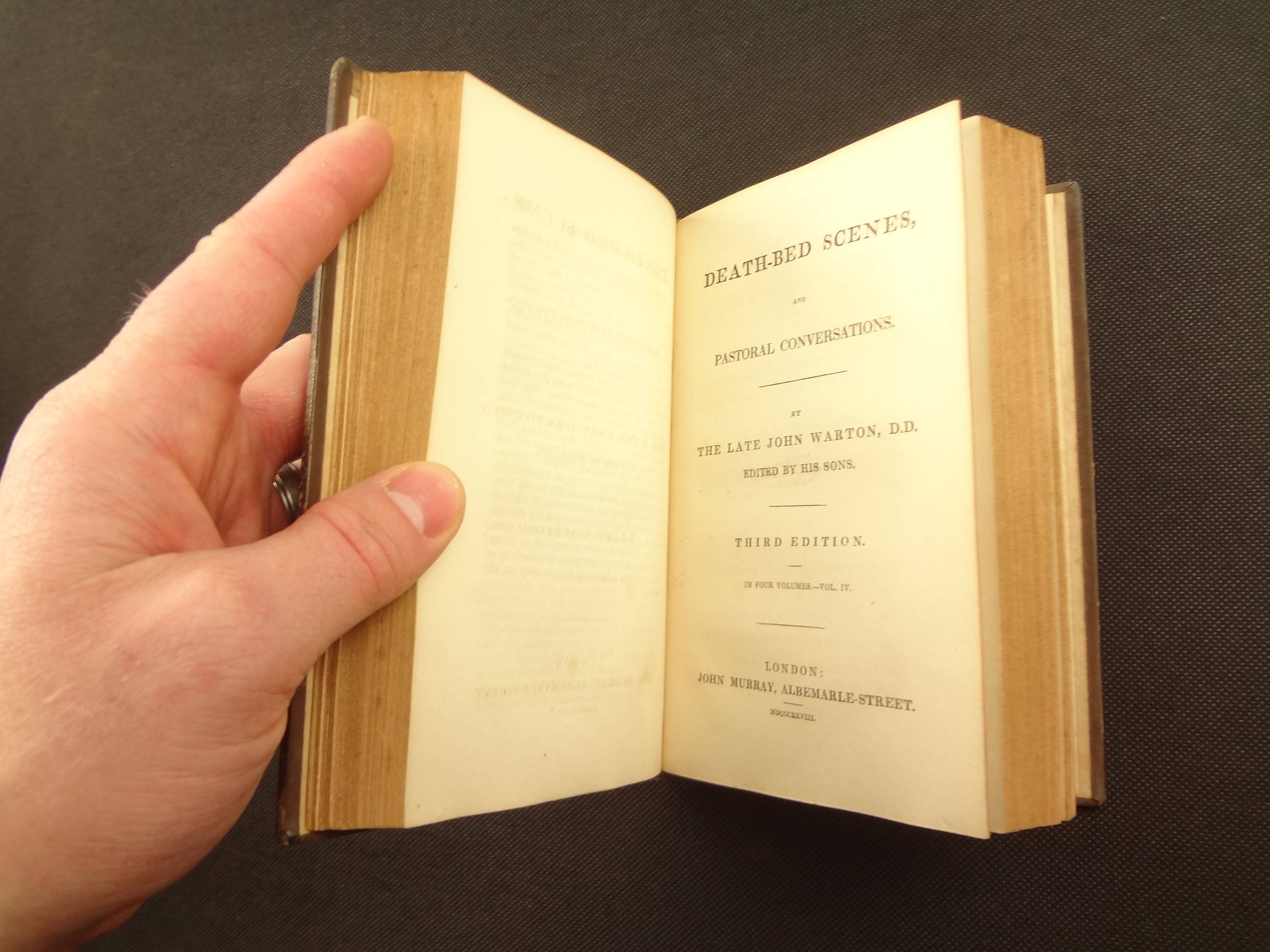 Rare, at the time of this listing I can't find another pre-1840 set available for sale. Complete, four volume edition of John Warton's Death-Bed Scenes and Pastoral Conversations, 1828. This is the first smaller edition (3rd ed.), the editor stating it was his intention to make the work portable in its ability to aid. Two volumes in each binding. Warton wrote these "conversations" to aid others engaged in pastoral duties. The preface to the work begins: "It has often occurred to me as something wonderful, that, amongst the vast variety of books, which are to be met with, on the important subject of Religion, there should still be wanted a manual for the information and direction of the Minister in his daily intercourse with sick persons and other members of his flock."

About the Literature -
“The effect produced by the Doctor's patient attendance upon these people, the mercy of God in turning this attendance to their advantage, the gradual declining into their former state, their occasional returns to their Maker in the day of affliction, are all so well described, that we can only hope our readers will lose no time in making this a part of their family library. The work, as a whole, will be found a valuable study for the parochial clergy.” – (The British Critic, Quarterly Theological Review, Jan. 1829, p.225)

Ex libris Edward Tuckerman (1817–1886) Boston, Massachusetts, was an American botanist and professor who made significant contributions to the study of lichens and other alpine plants. He was a founding member of the Natural History Society of Boston and most of his career was spent at Amherst College. When Lewis and Clark went on their 1804-1806 expedition across the western United States, they collected many plant, seed, and flower species that had never been seen before. Lewis wrote notes about these species and they were put on scrap book paper. After Lewis died in 1809, dozens of his scrapbook pages were stolen by a botanist who was supposed to draw and classify the plants collected on the expedition. He took the papers to England to sell for money at an auction in 1842. Tuckerman noticed the auction and the significance of these papers. He bought them and then donated them to the Academy of Natural Sciences in Philadelphia.

See pictures. A little shelf wear with minor rubbing at edges. Loss of 2nd volumes labels, but otherwise the leather is soft, the spine tops are not chipped, and the corners are not lost. Some dust on top edge. Ex libris and bookseller ticket (of early 19th century) on pastedown, libris has ghosted onto flyleaf. Blank unpaginated endpapers have foxed, and foxed the page facing them (title and last) but otherwise the books text blocks have only a very occasional spot of foxing; mostly clean and clear text. Occasional dog eared page. Tuckerman signed the title page of volume one and three at top margin.