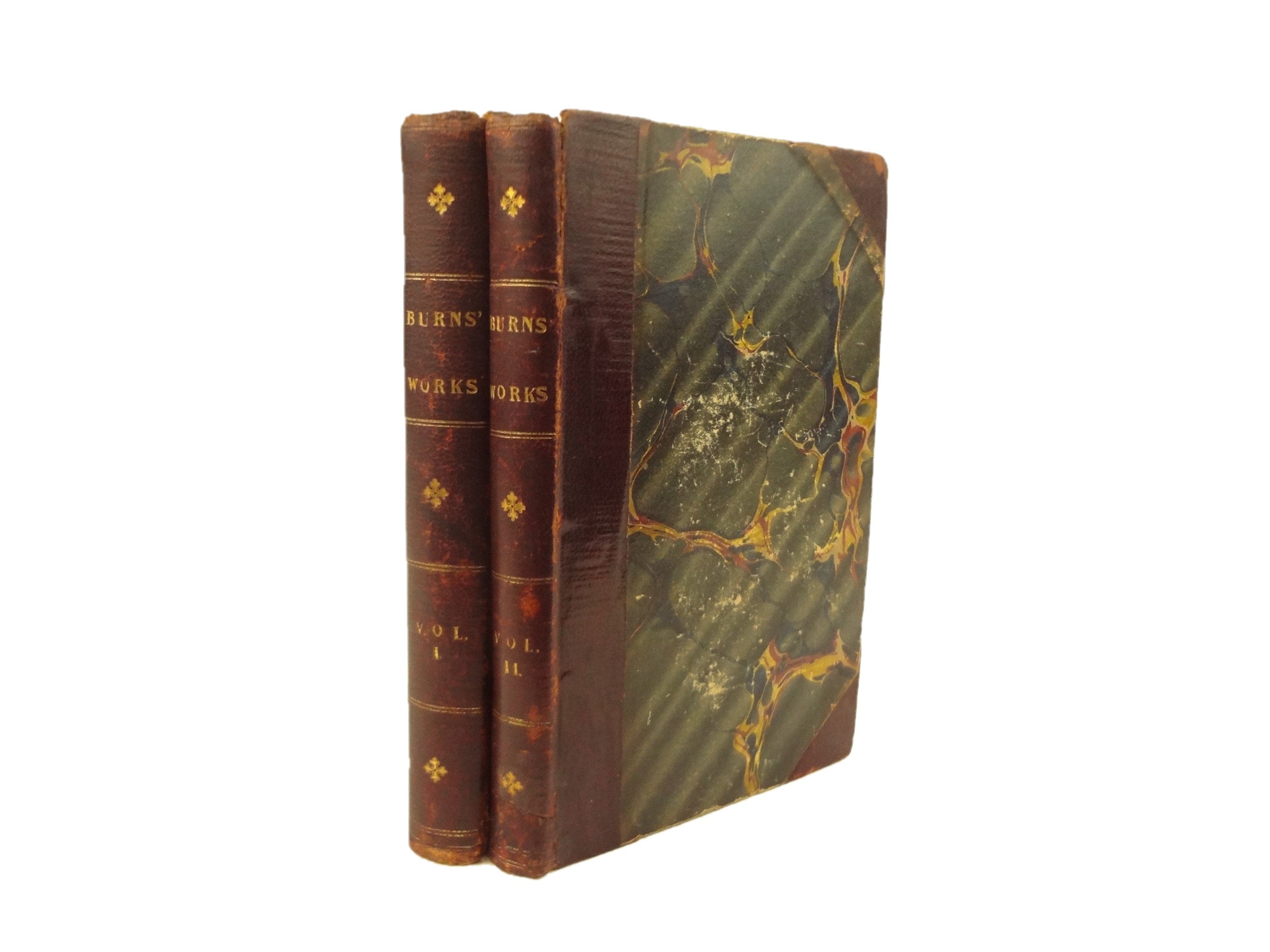 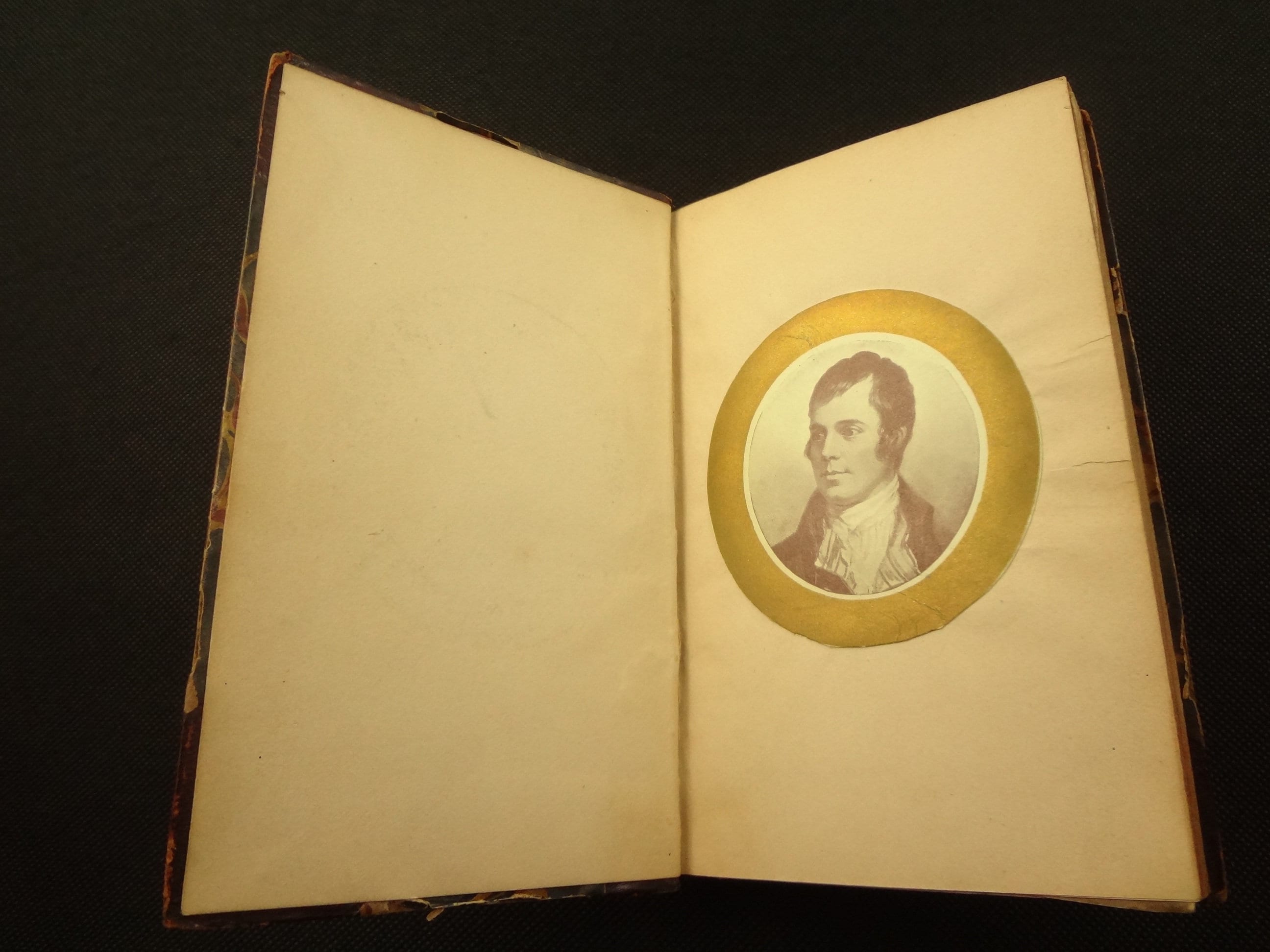 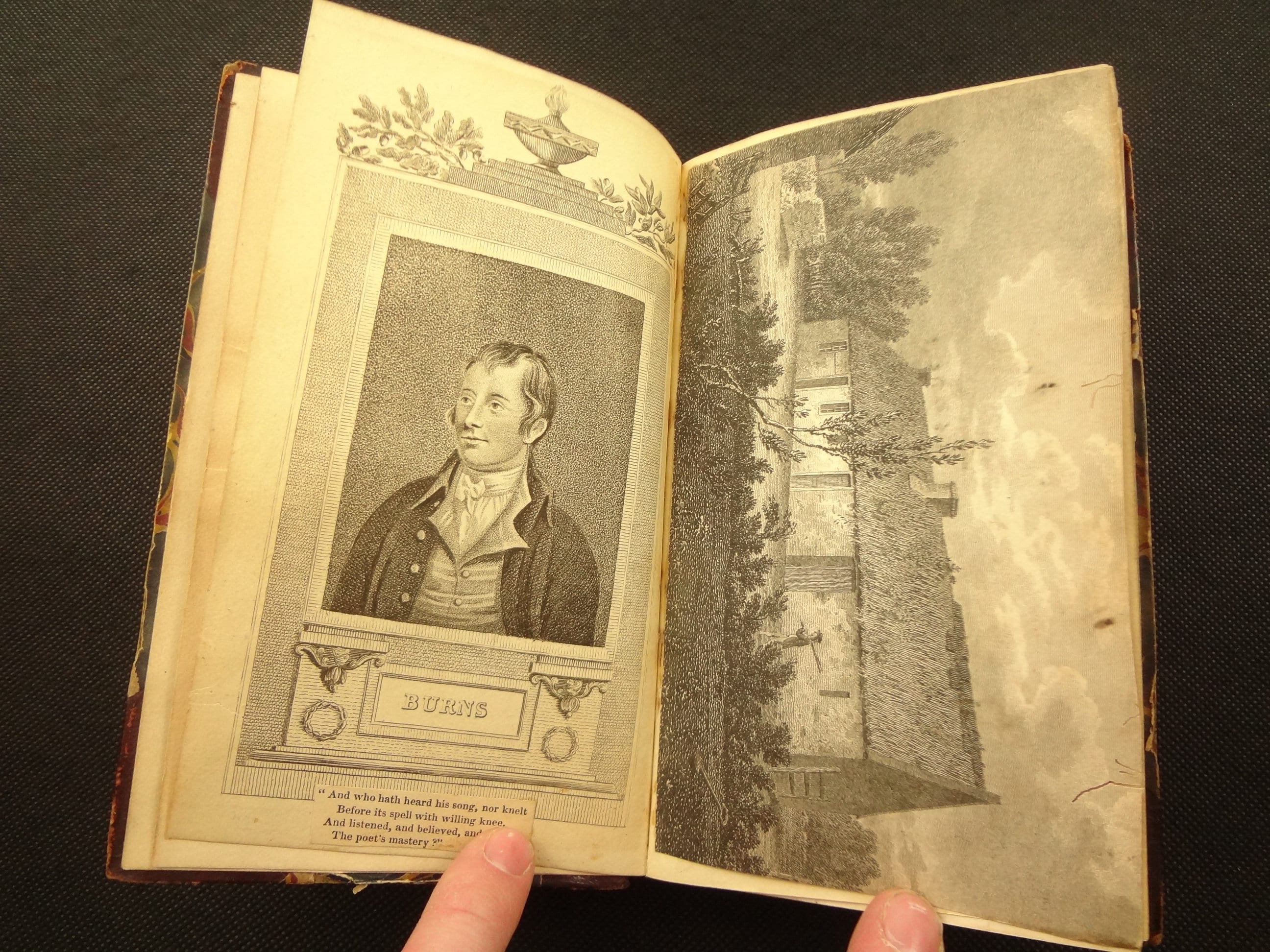 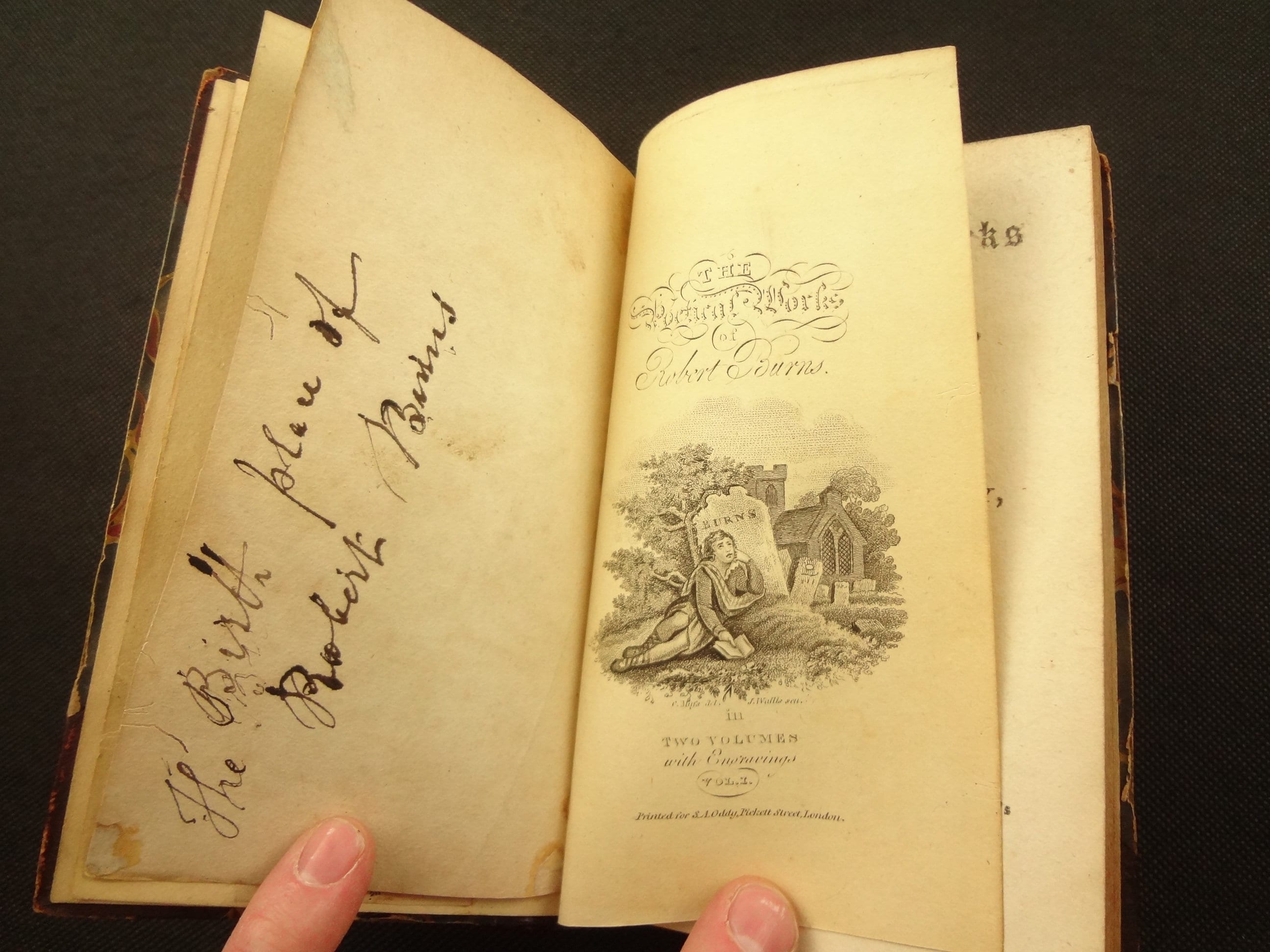 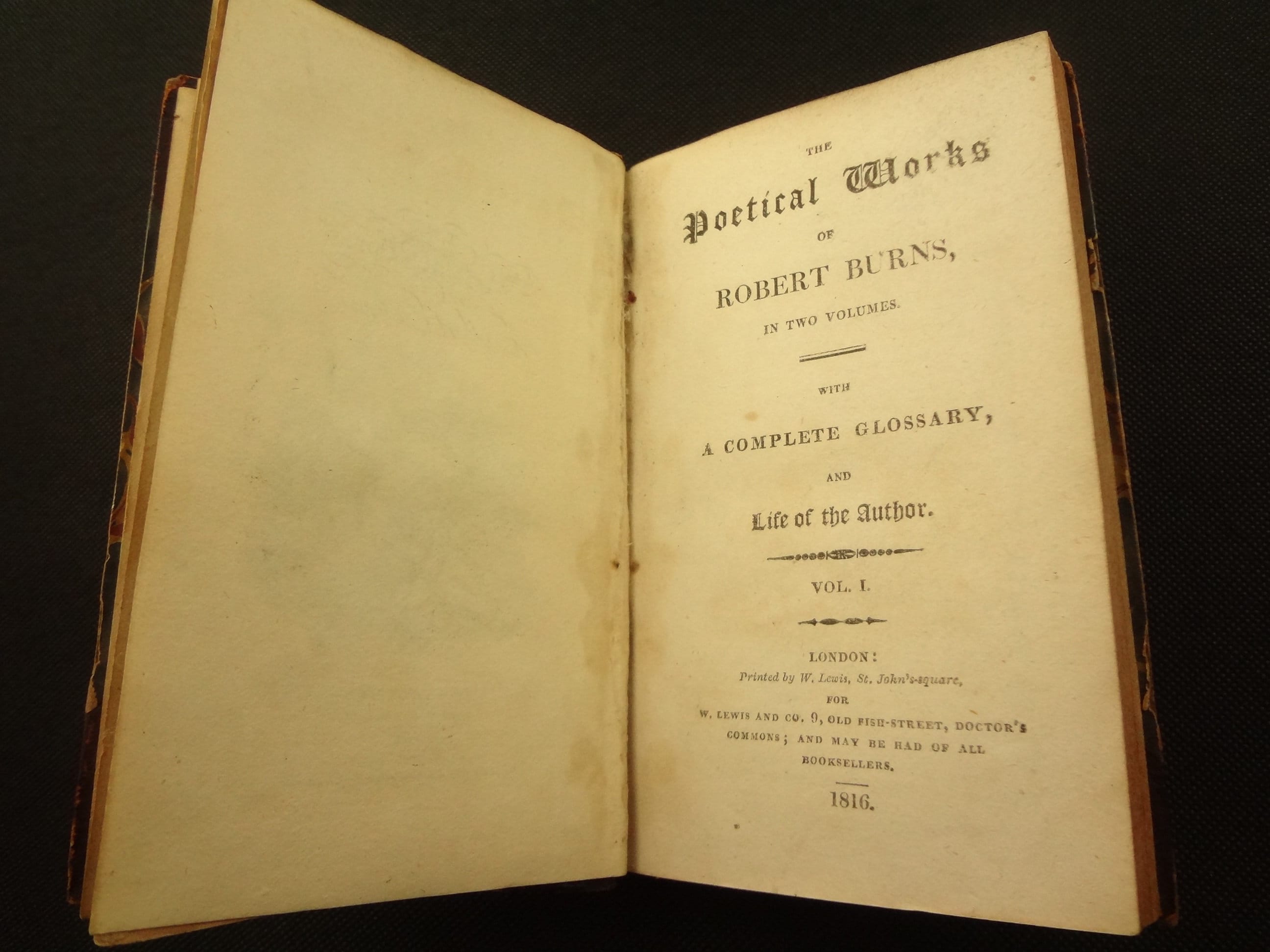 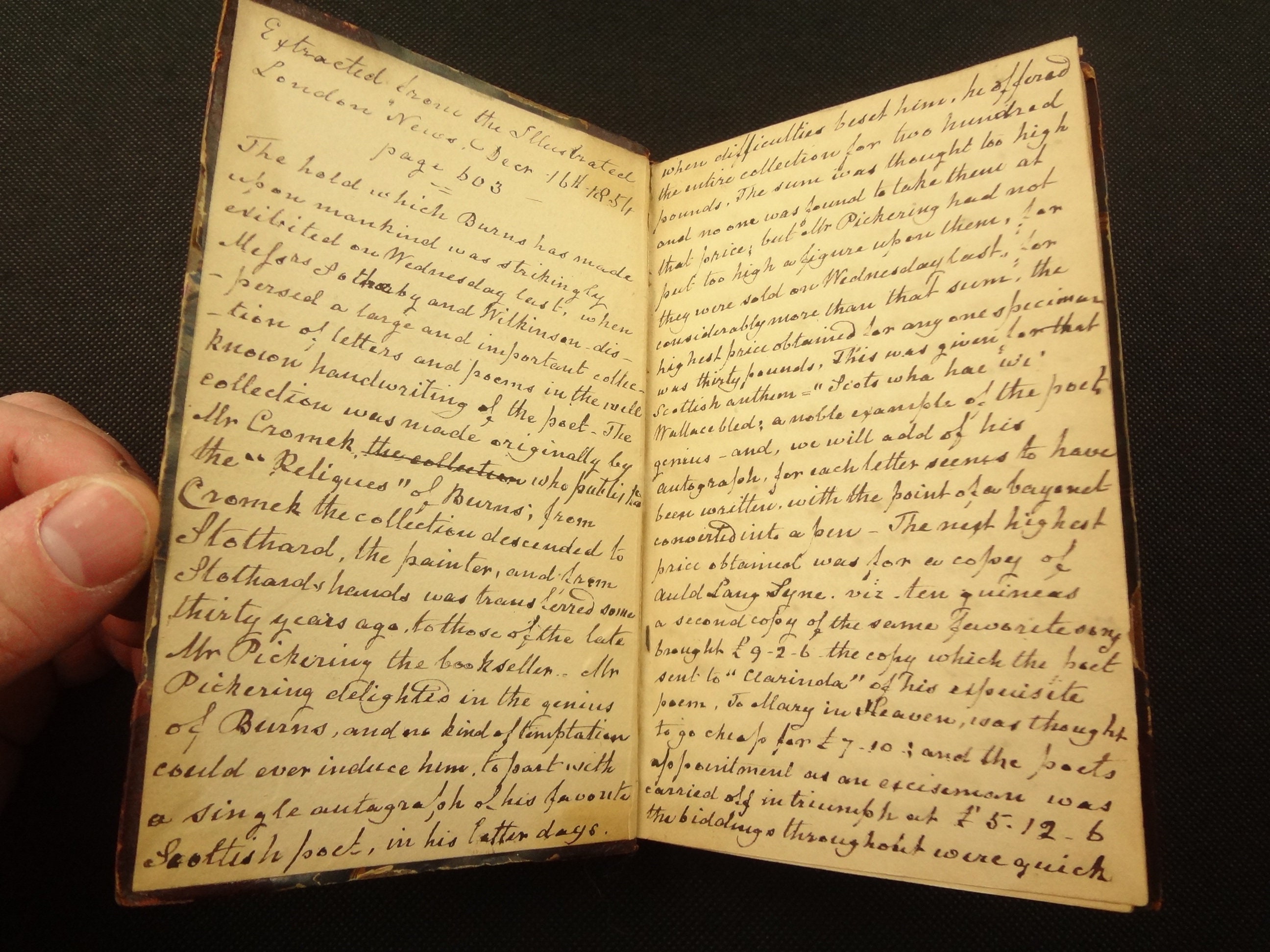 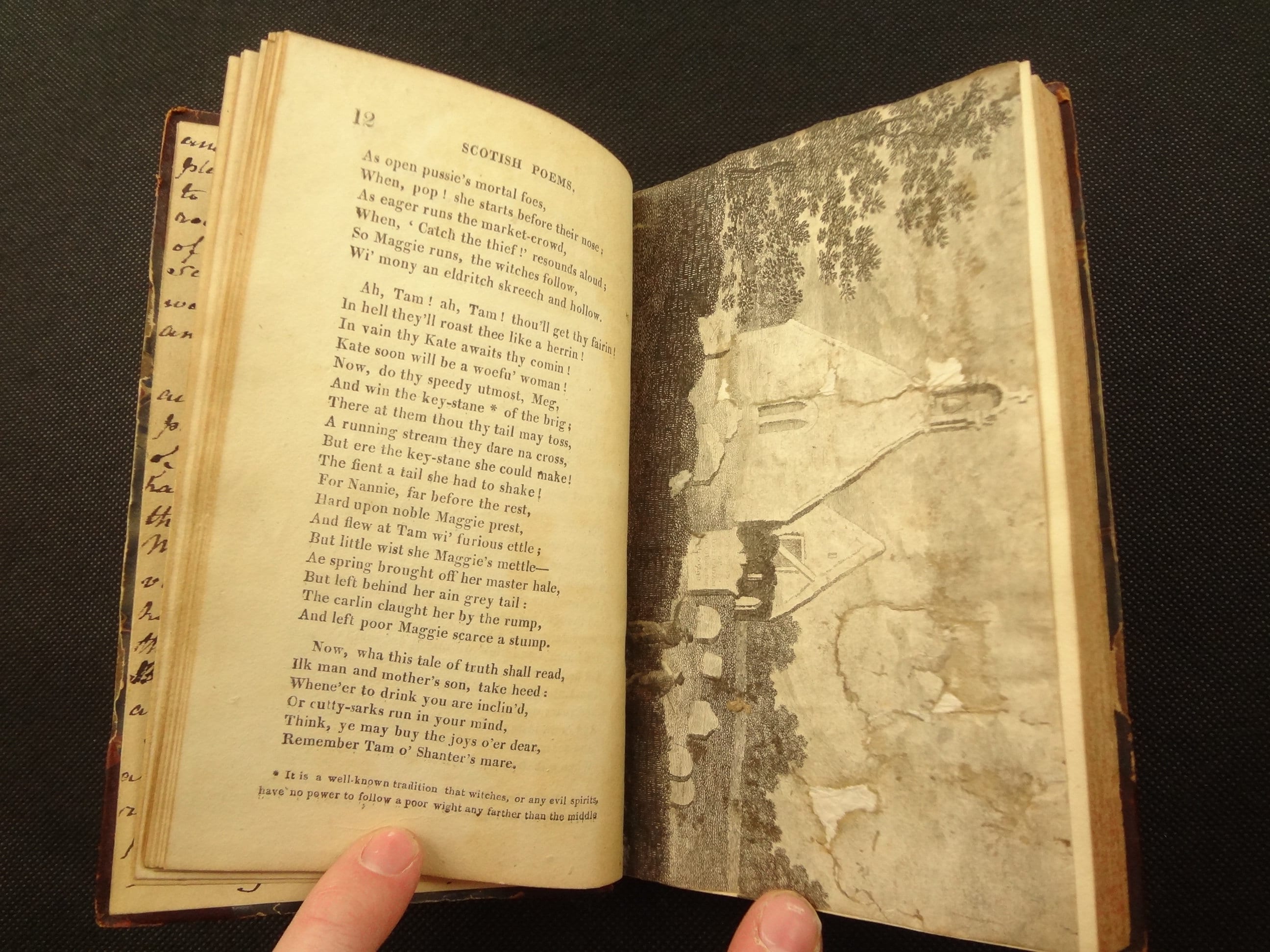 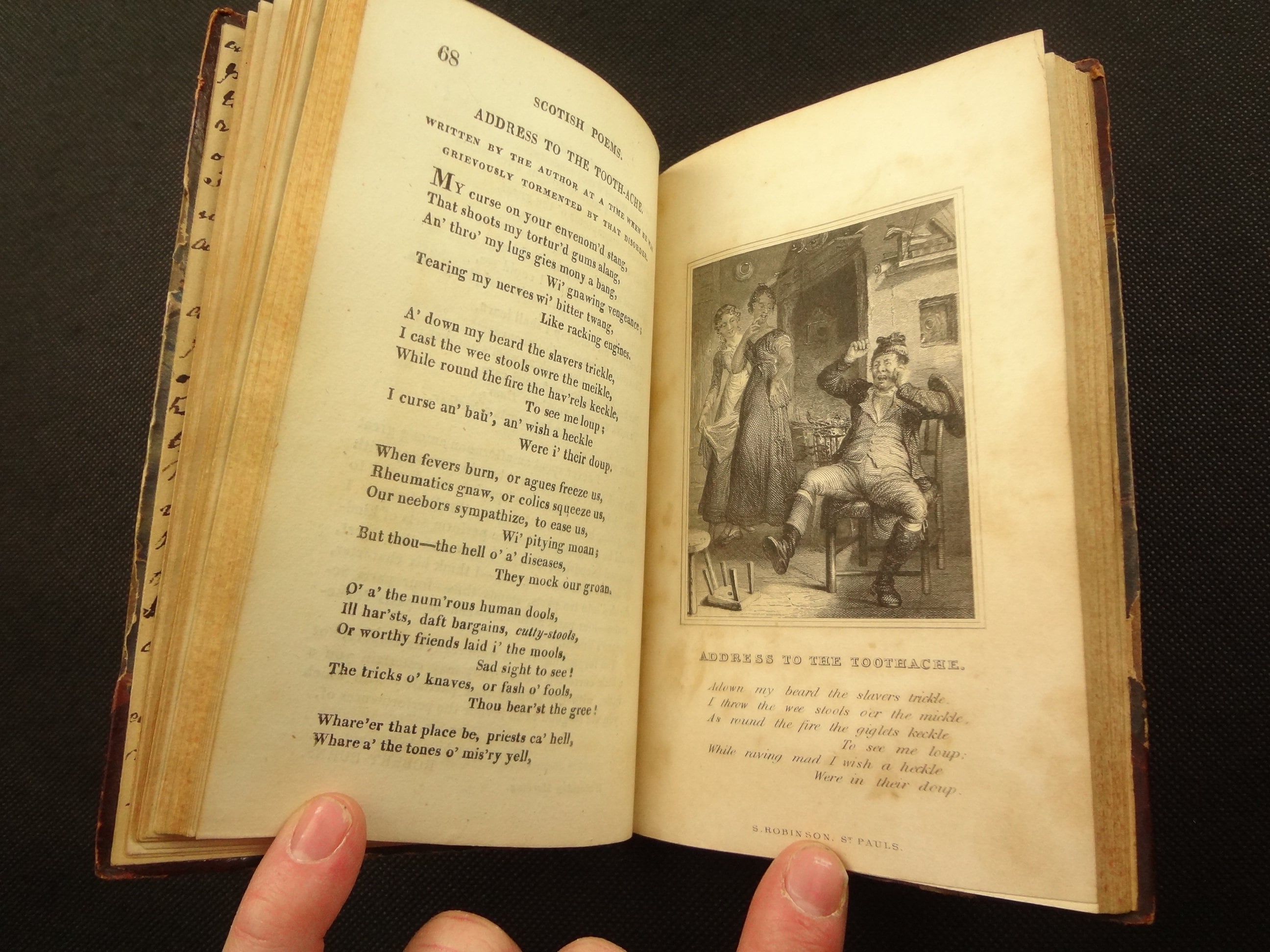 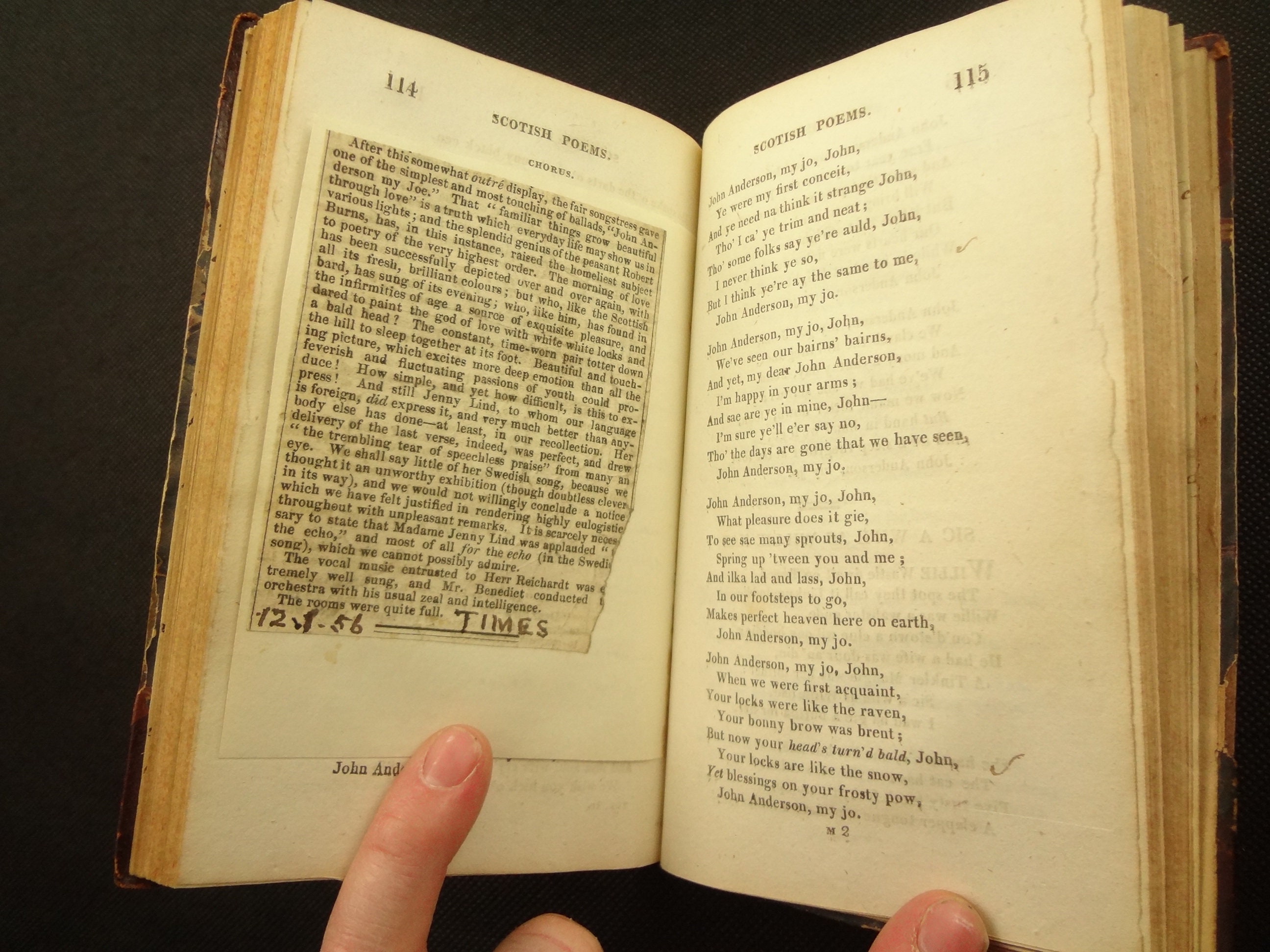 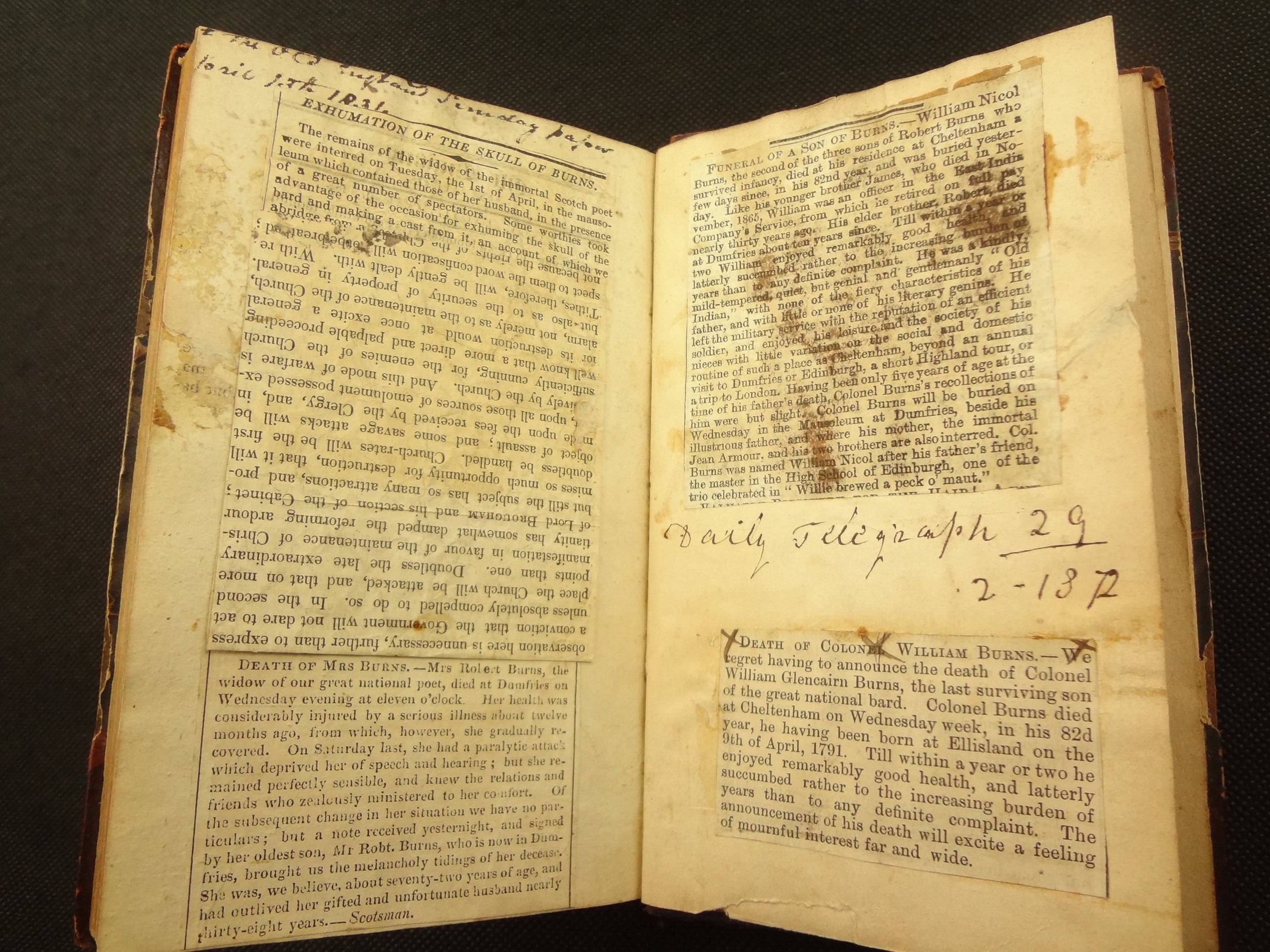 This early edition of the works of Robert Burns was added heavily to in the 19th century, with handwritten extracts from newspapers, newspaper clippings, and extra illustrations. These volumes lack the pompous air of many of the "extra-illustrated" volumes of the 19th century, instead giving the impression that someone very appreciative of Burns, over the course of many years, added to his books when new sources of information were presented. The 1834 description of the extraction of his skull, to place with his wife, and the death mask casting (many years after death) is remarkably... (creepy?).

While Auld Lang Syne is not in these volumes, you will find "To a Haggis", with a relevant 19th century news clipping on Haggis pasted on a flap next to it! Perfect reading for your next Burns Supper.

Gibson's bibliography says this is a reprint of the Oddy's 1810 edition. Based on this info, the five plates of Oddy's are present, as well as the v1. frontis, and both volumes 1/2 title vignettes. In addition there are two un-labelled plates, one of Burn's birthplace (v1), and the other of the Alloway Church Yard (v2). Then there are two additional plates in v1, Halloween, and Cotter's Saturday Night. There are also two additional plates in v2, Address to a Toothache, and The Jolly Beggars.

Each volumes measures approx. 16 x 10 x 1.75 cm. The spines are leather, with five compartments; "Burns' Works" in one, "Vol. x" in another, and the other three have a central cross, all in gilt, separated by double fillet rules. Boards are covered in marbled paper, with the corners protected in leather. The page edges are sprinkled (little red dots). Pages v1 - frontis, half-title (vignette), title=i to viii, 199, (1). Pages v2 - Frontis, title=i to viii, 165, (2). See notes on illustrations in above paragraph.

See pictures. Vintage patina, with shelf and edge wear and some rubbing. Tops of joints have the starts of cracks but the joints still feel strong. Dusty edges and a little chipping at the top of the spine. 1 cm tear on plate of his birthplace. Toning throughout, with an occasional foxing spot and thumb. A little separation between 1/2 title and title page in V1. Extra items pasted in throughout, and written in on blank endpapers. Check marks next to the verses on John Anderson My Jo. A pleasing patina of time and love, these volumes were someone's treasures in the 19th century.