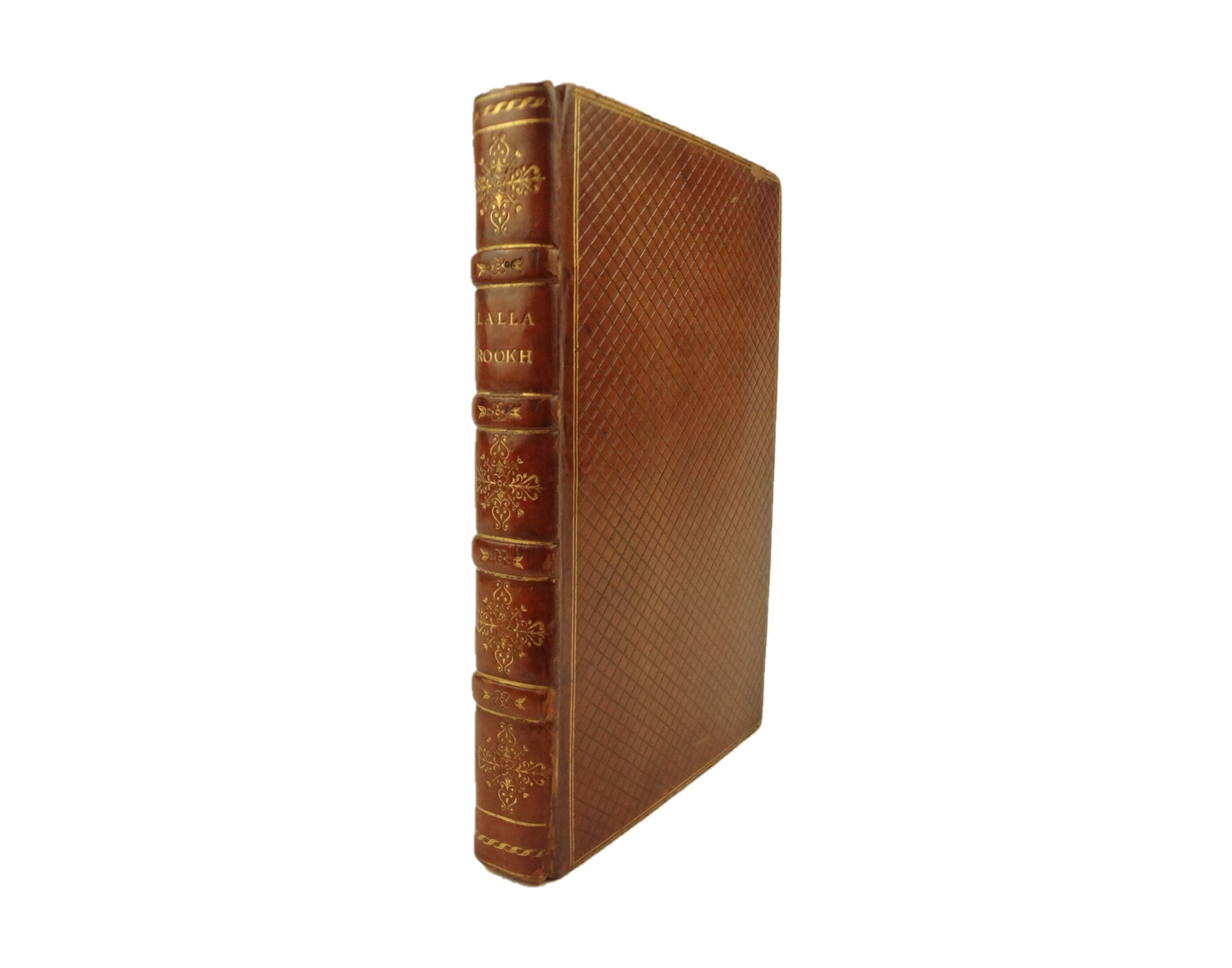 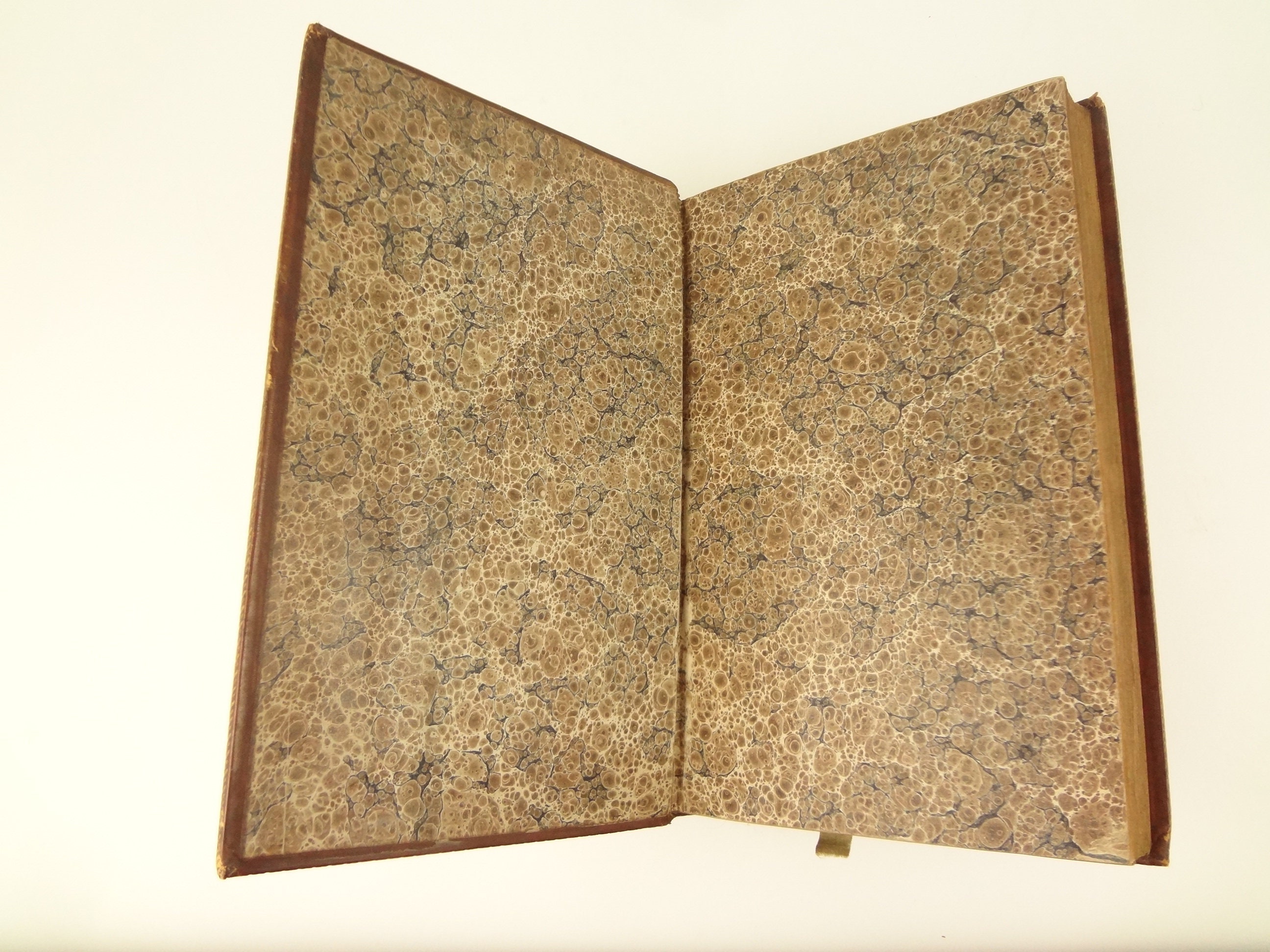 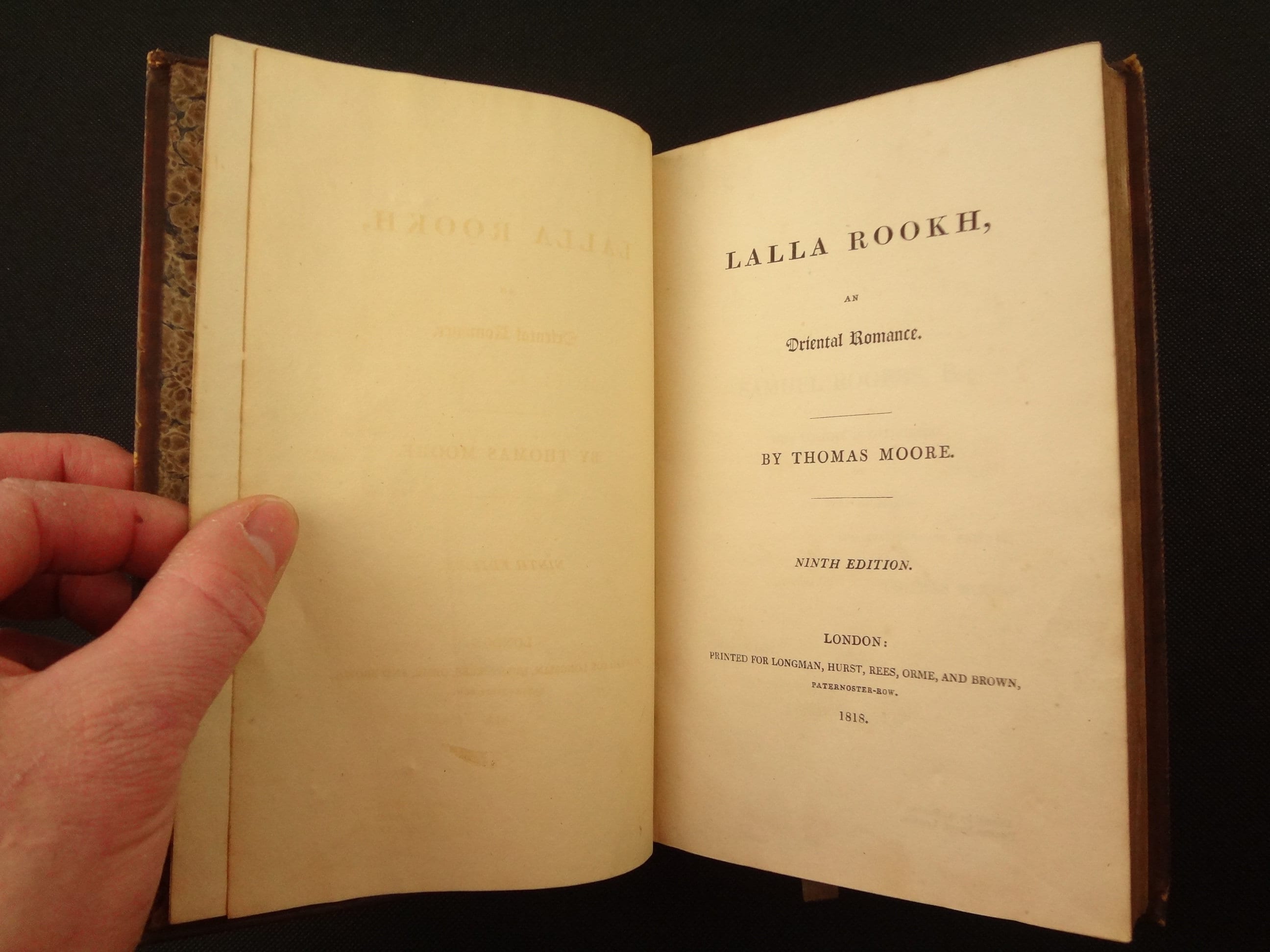 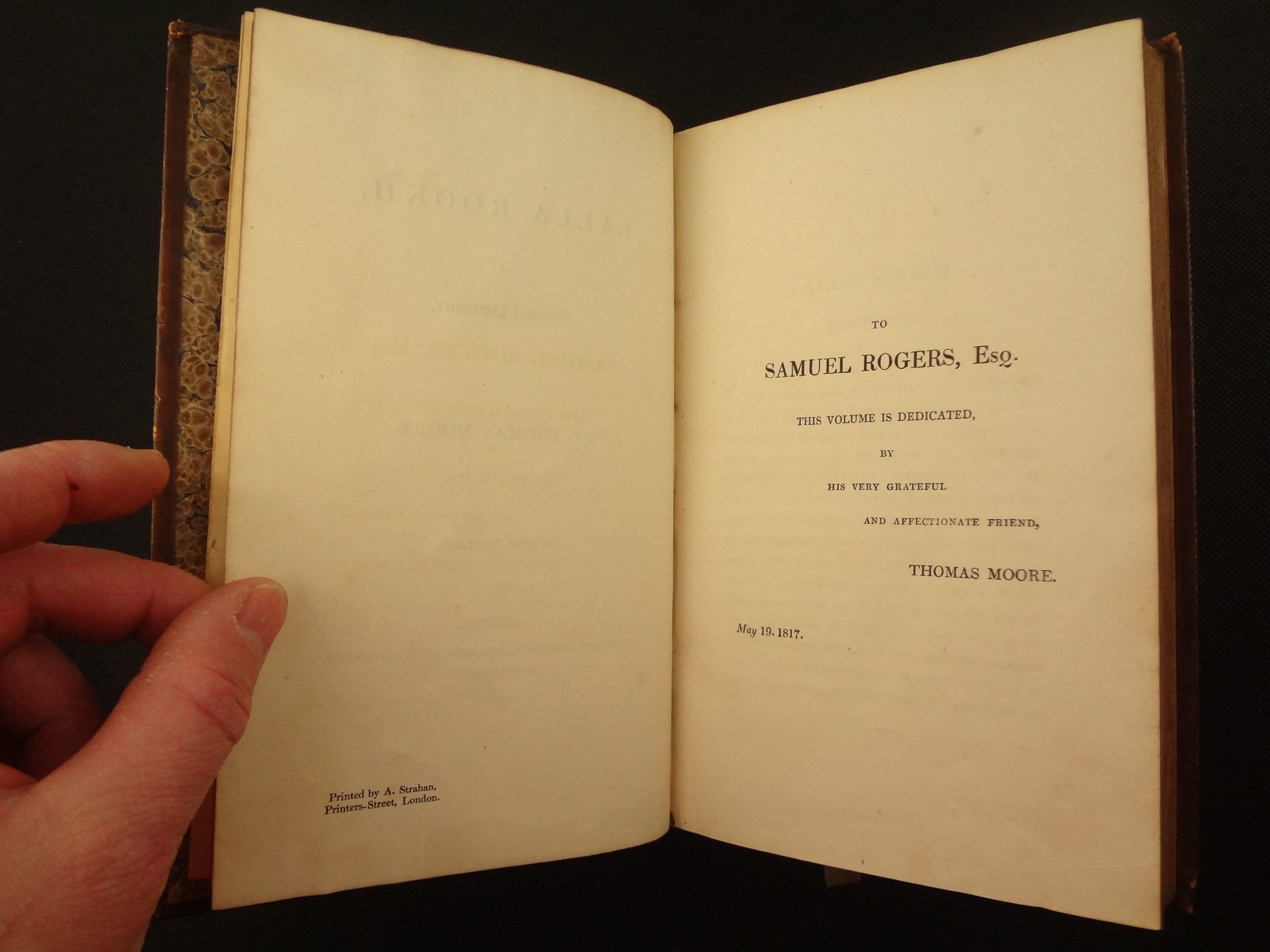 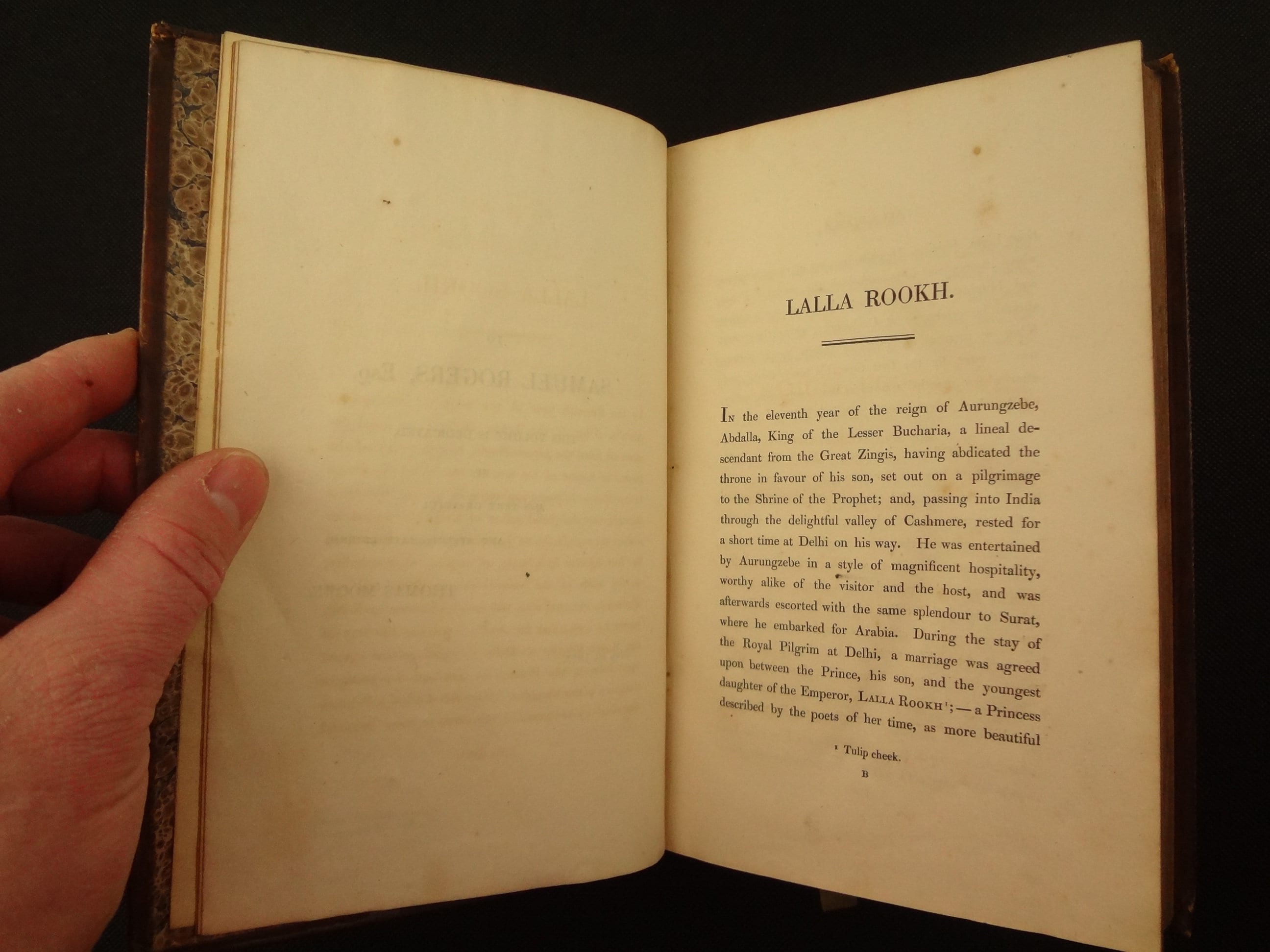 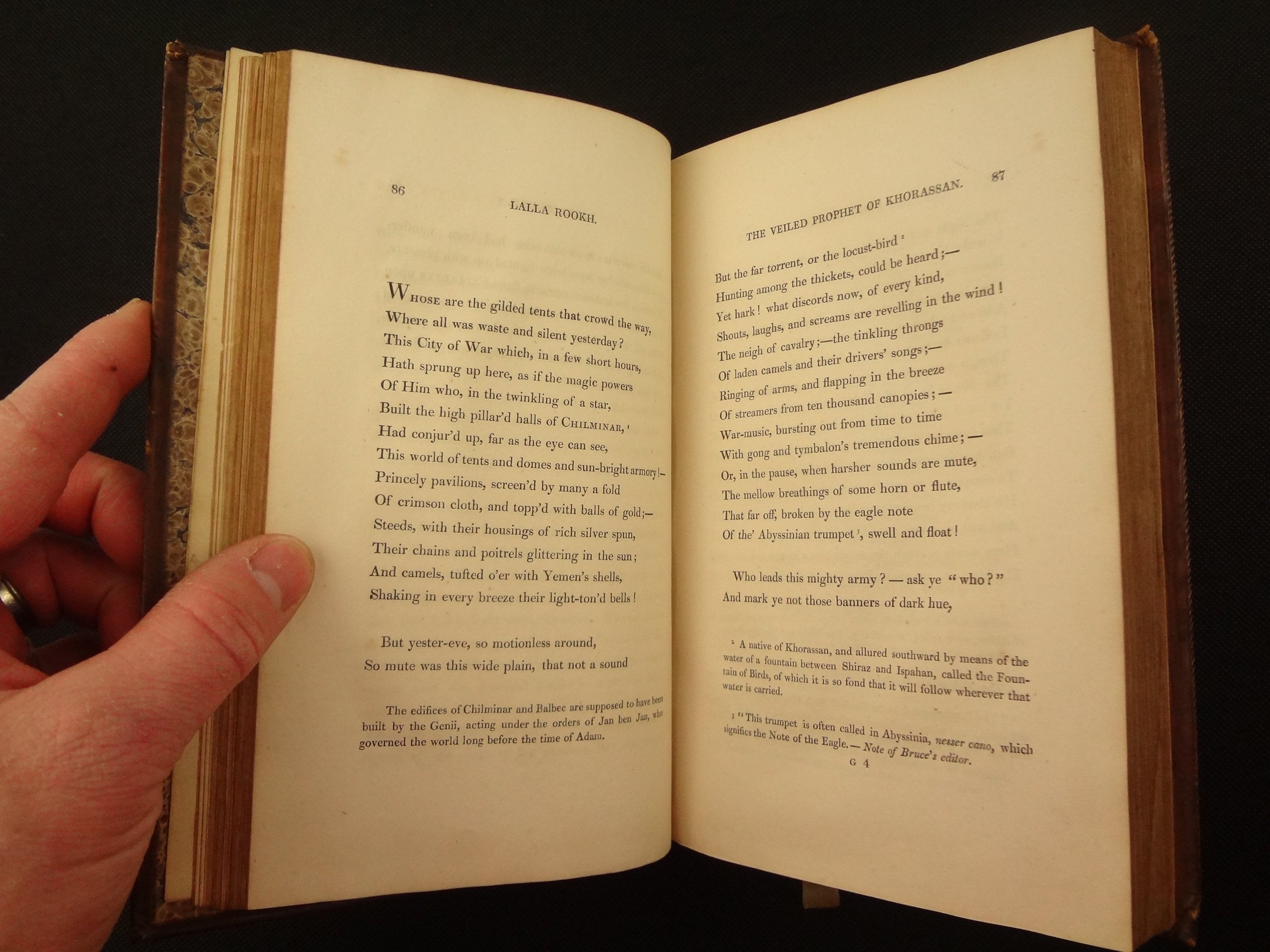 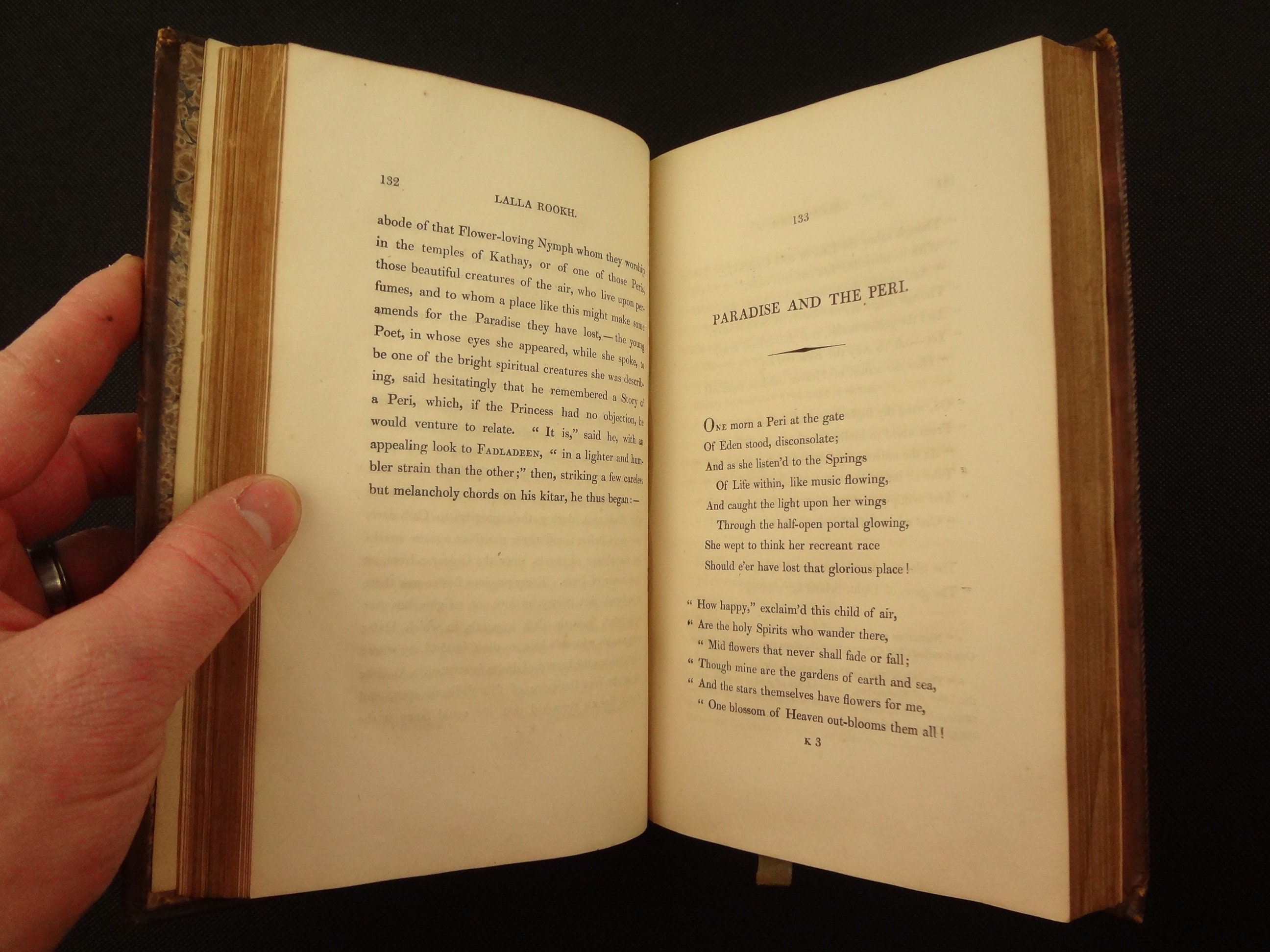 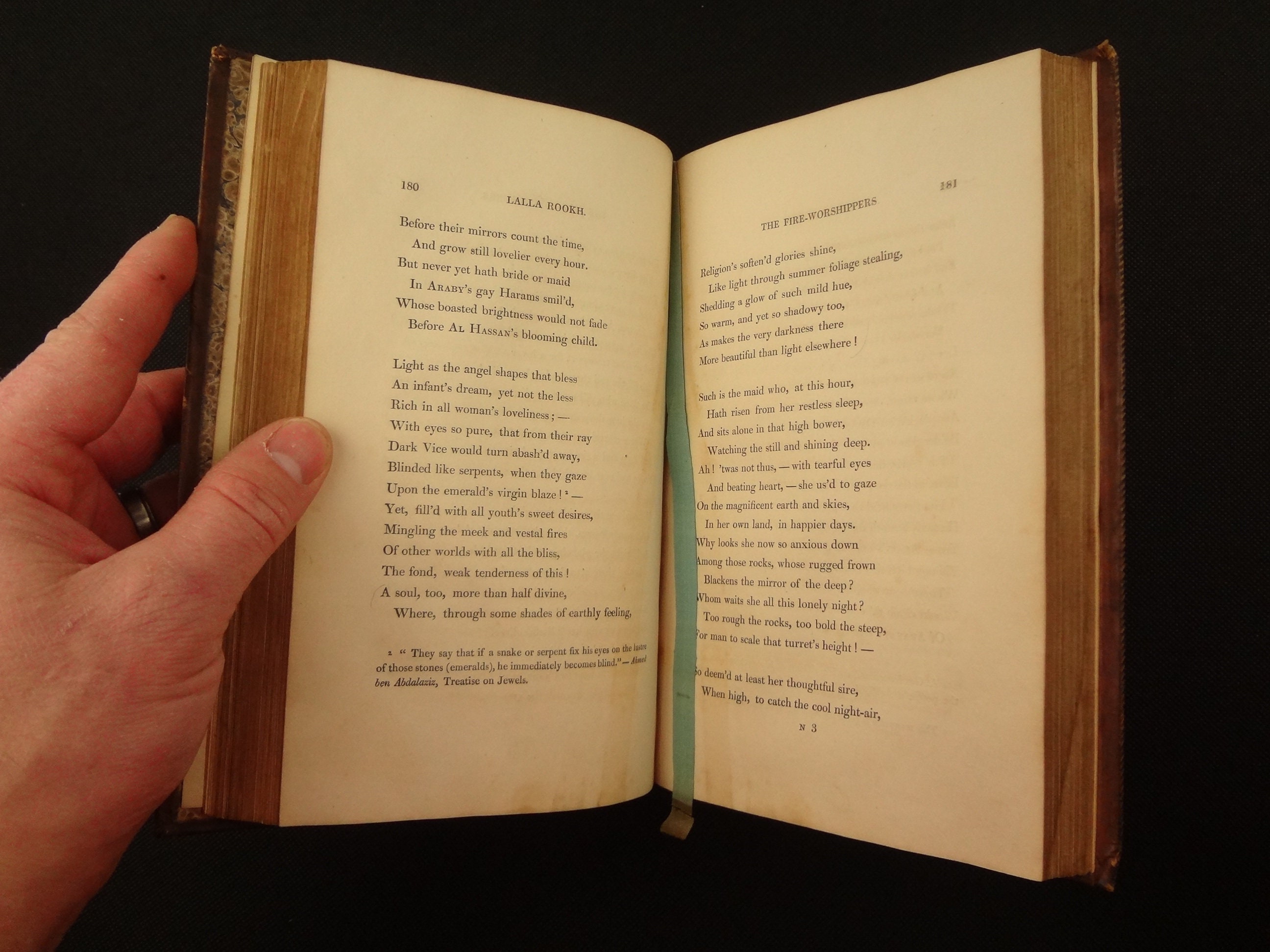 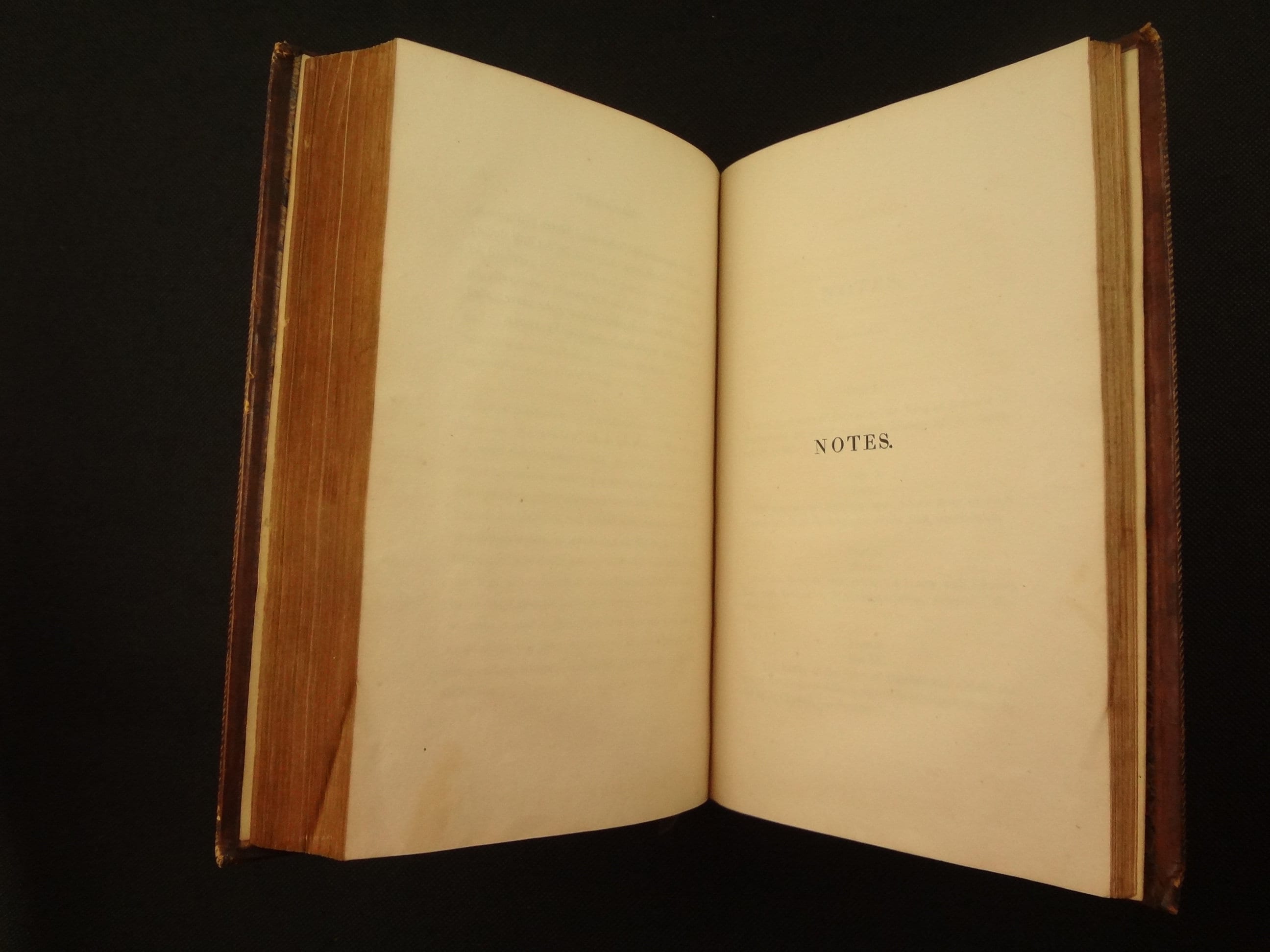 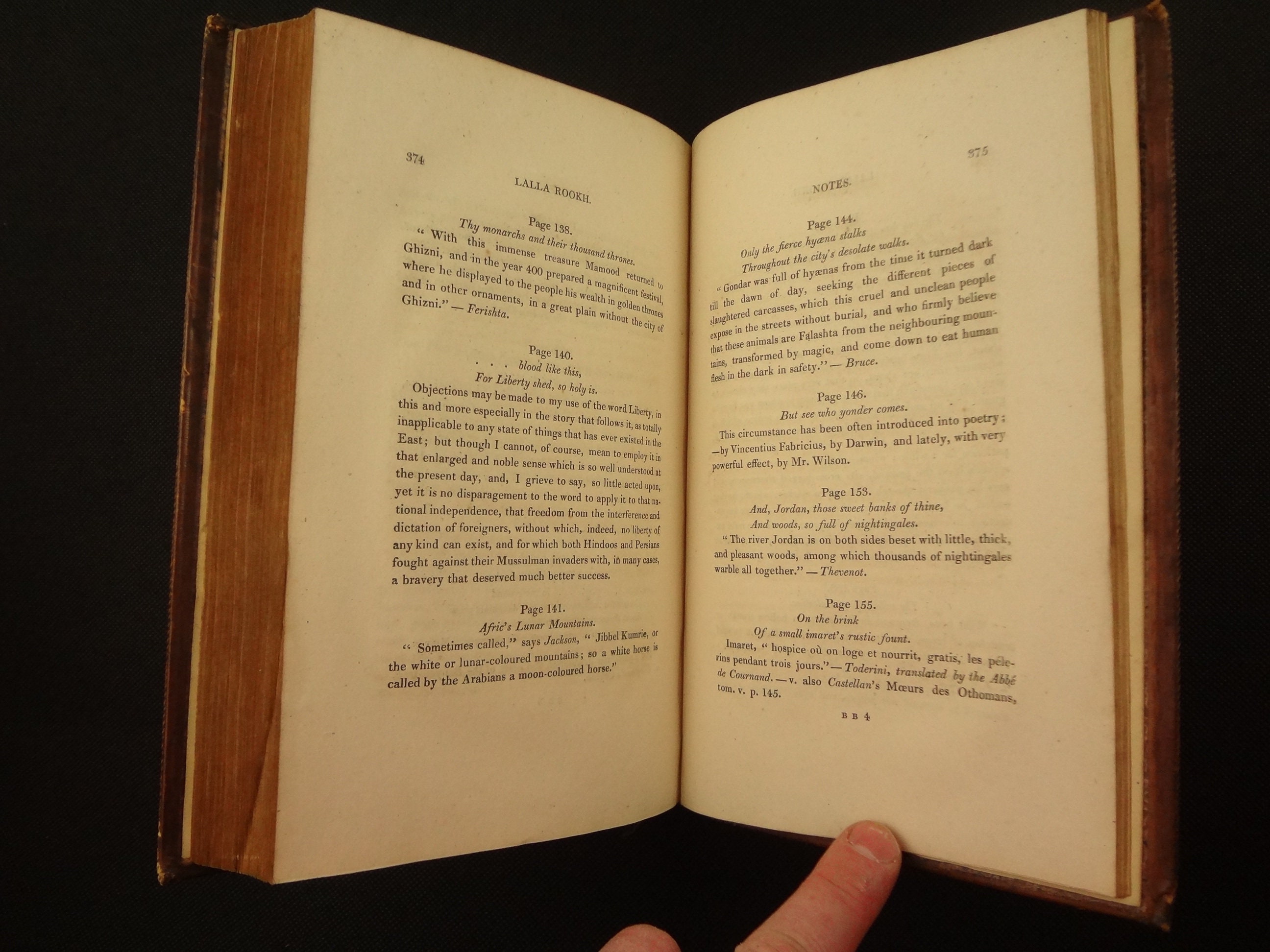 A handsomely bound 1818 printing of Thomas Moore's classic work Lalla Rookh! This spine is beautiful on the book shelf!
Moore might be considered Ireland's national bard and some consider him to Ireland what Robert Burns is to Scotland. Moore is commemorated in several places: by a plaque on the house where he was born, by busts at The Meetings and Central Park, New York, and by a bronze statue near Trinity College Dublin. There is a road in Walkinstown, Dublin, named Thomas Moore Road, in a series of roads named after famous composers, locally referred to as the Musical Roads. Many composers have set the poems of Thomas Moore to music. They include Gaspare Spontini, Robert Schumann, Hector Berlioz, Charles Ives, William Bolcom, Lori Laitman, Benjamin Britten and Henri Duparc.

"The name Lalla Rookh, means "tulip cheeked" and is an endearment frequently used in Persian poetry. Engaged to the young king of Bukhara, Lalla Rookh goes forth to meet him, but falls in love with Feramorz, a poet from her entourage. The bulk of the work consists of four interpolated tales sung by the poet: "The Veiled Prophet of Khorassan" (loosely based upon the story of Al-Muqanna), "Paradise and the Peri", "The Fire-Worshippers", and "The Light of the Harem". When Lalla Rookh enters the palace of her bridegroom she swoons away, but revives at the sound of a familiar voice. She awakes with rapture to find that the poet she loves is…"

Measures approx. 21 x 13 x 3 cm. Calf, with four wide raised bands to spine. Five compartments of the spine have beautiful floret dentelle-like motifs, and one has "Lalla Rookh" in gilt. Boards are ruled in double gilt, with cross-hatch of blind ruling within the frames. Board edges rolled with gilt. Marbled endpapers. Pages - (2), iv, 397, (2).

See pictures. Shelf and edge wear, with an occasional rub. Paper toned with occasional foxing spots. Silk ribbon expired at top edge. Some dust along edges. Toward rear of book, bottom corner of text block has a very light bump causing a light crease like a dog-eared page; does not approach text. Occasional dog-eared page at top edge. Ex libris and bookseller marks on back of flyleaf. Rear marbled endpaper has 1 cm mark at bottom edge on both pages.