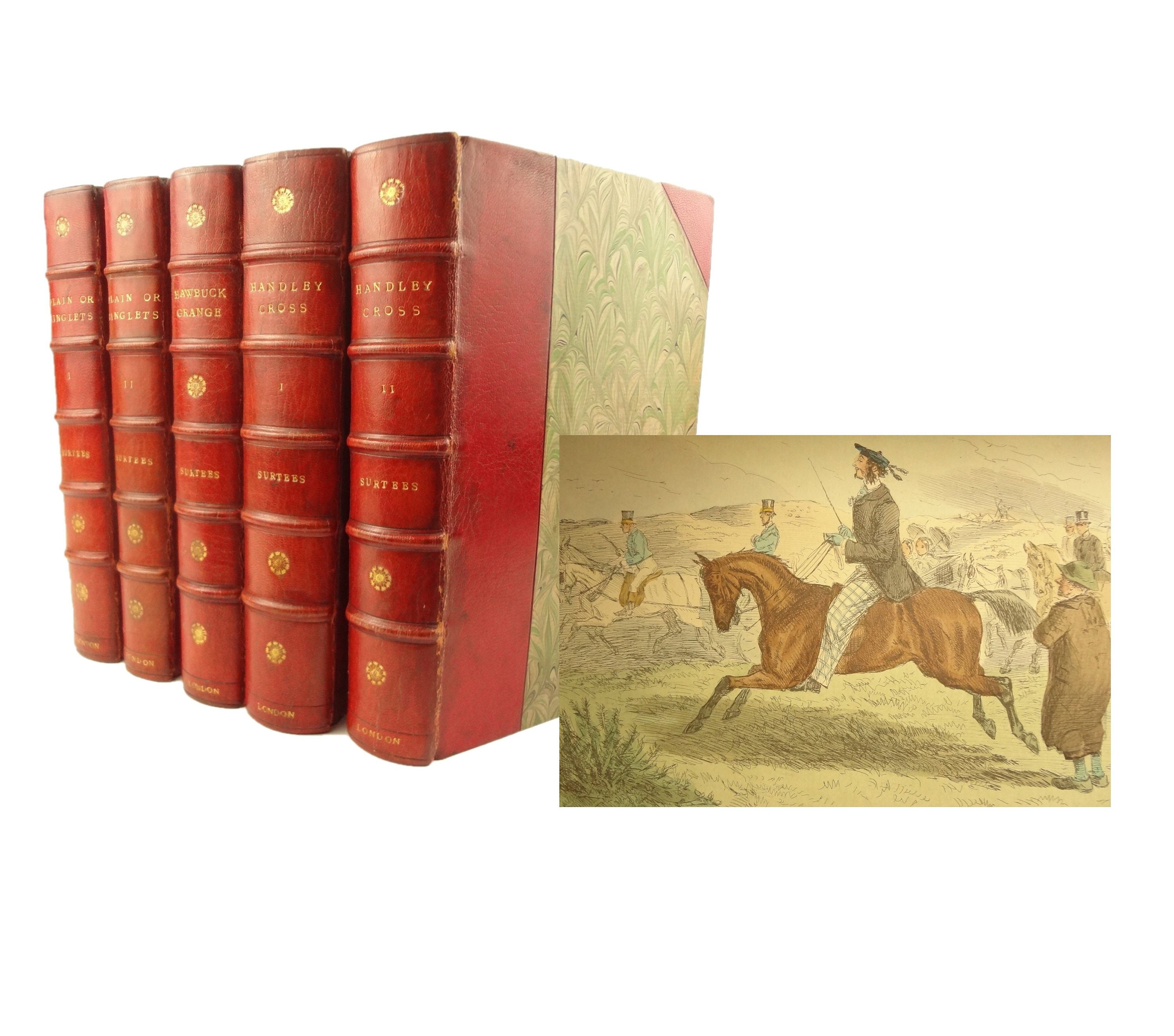 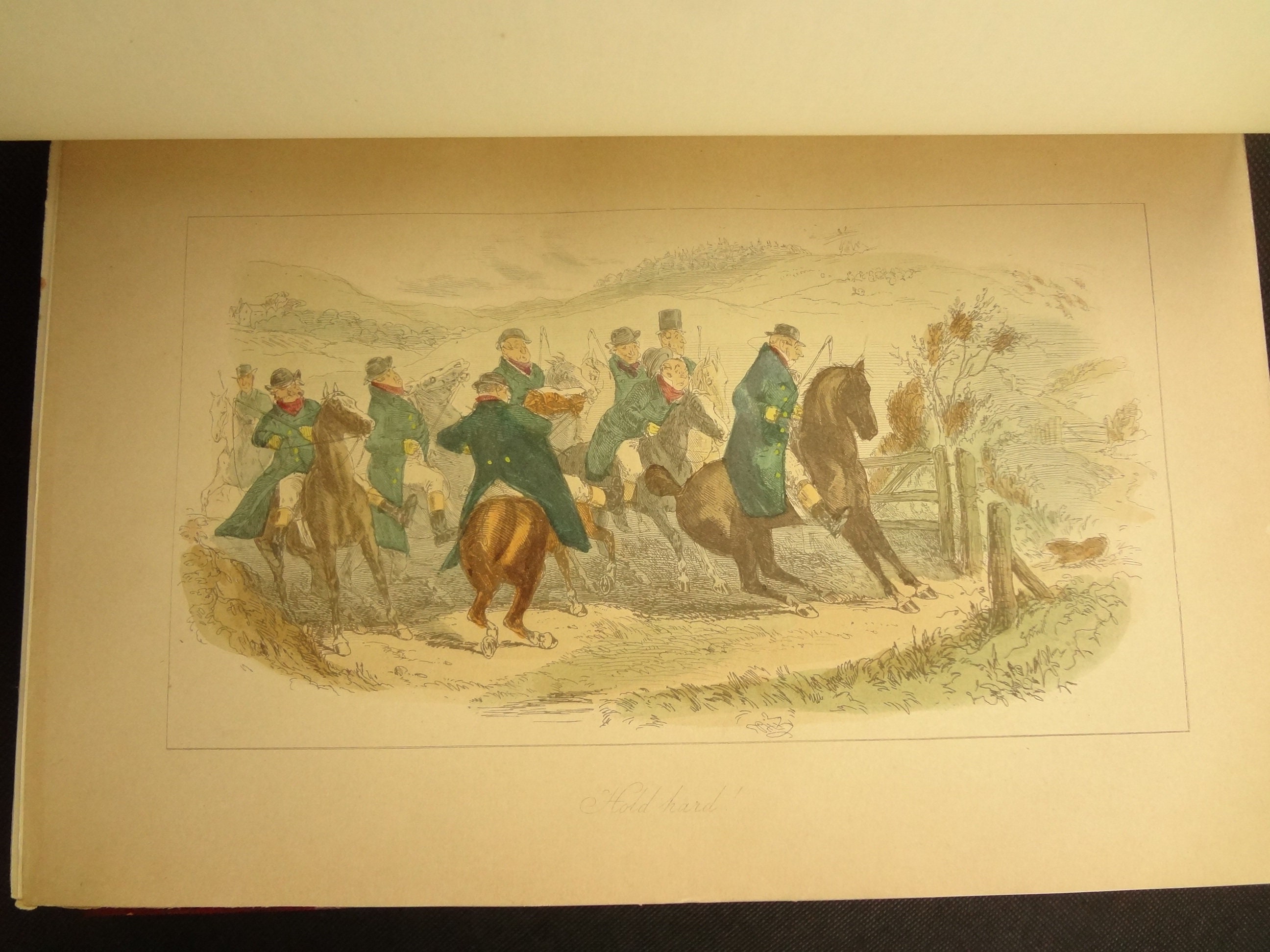 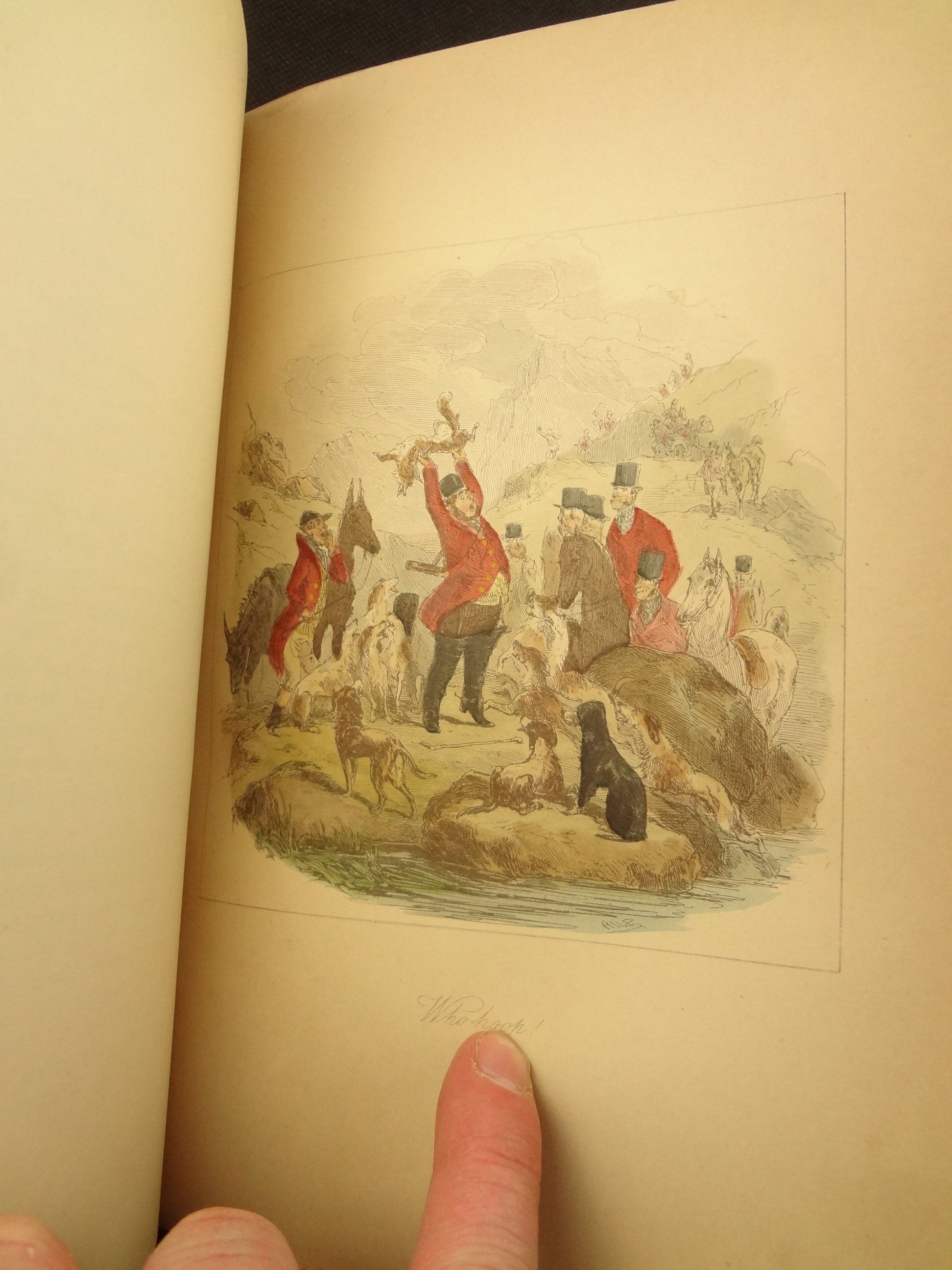 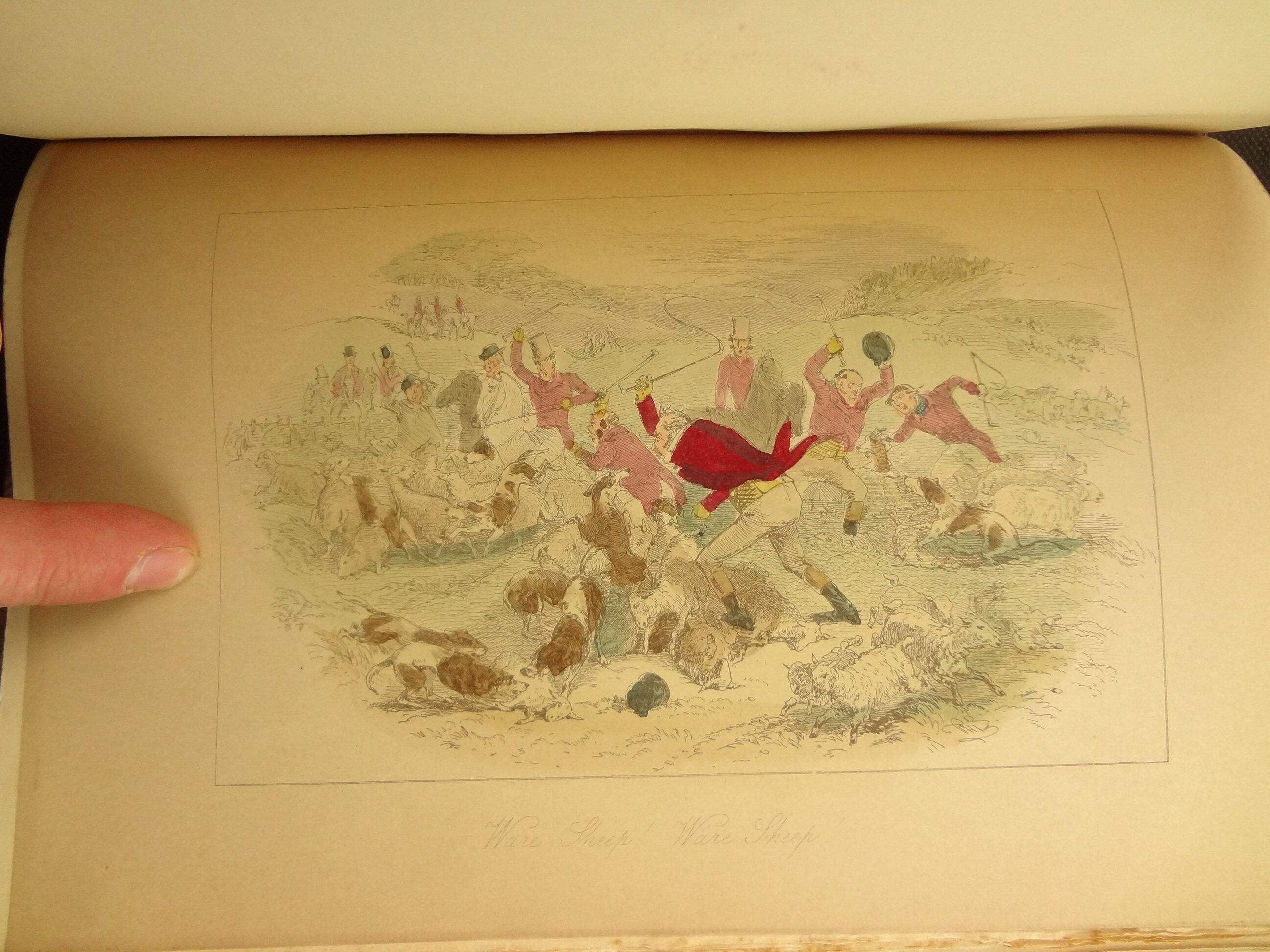 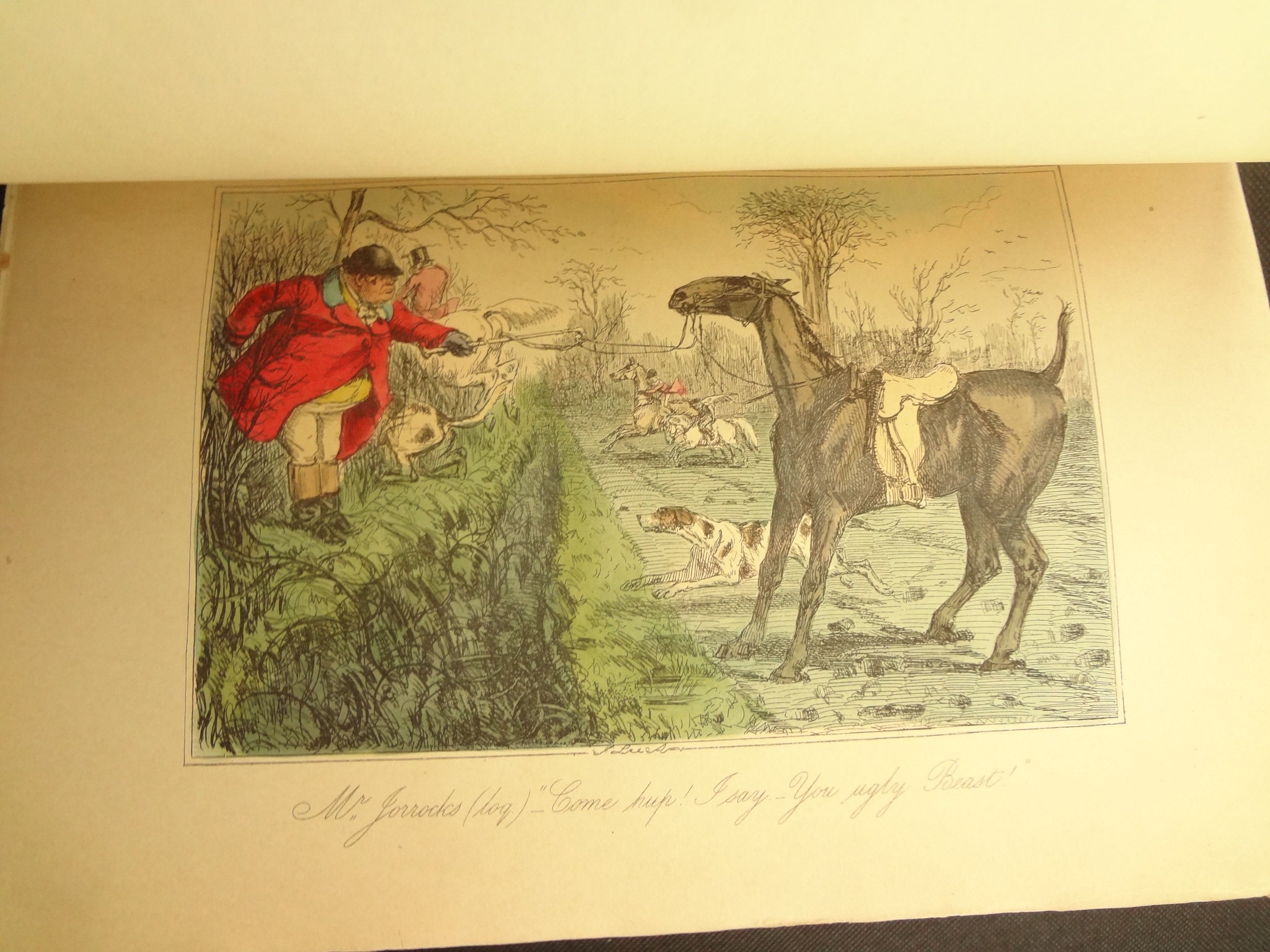 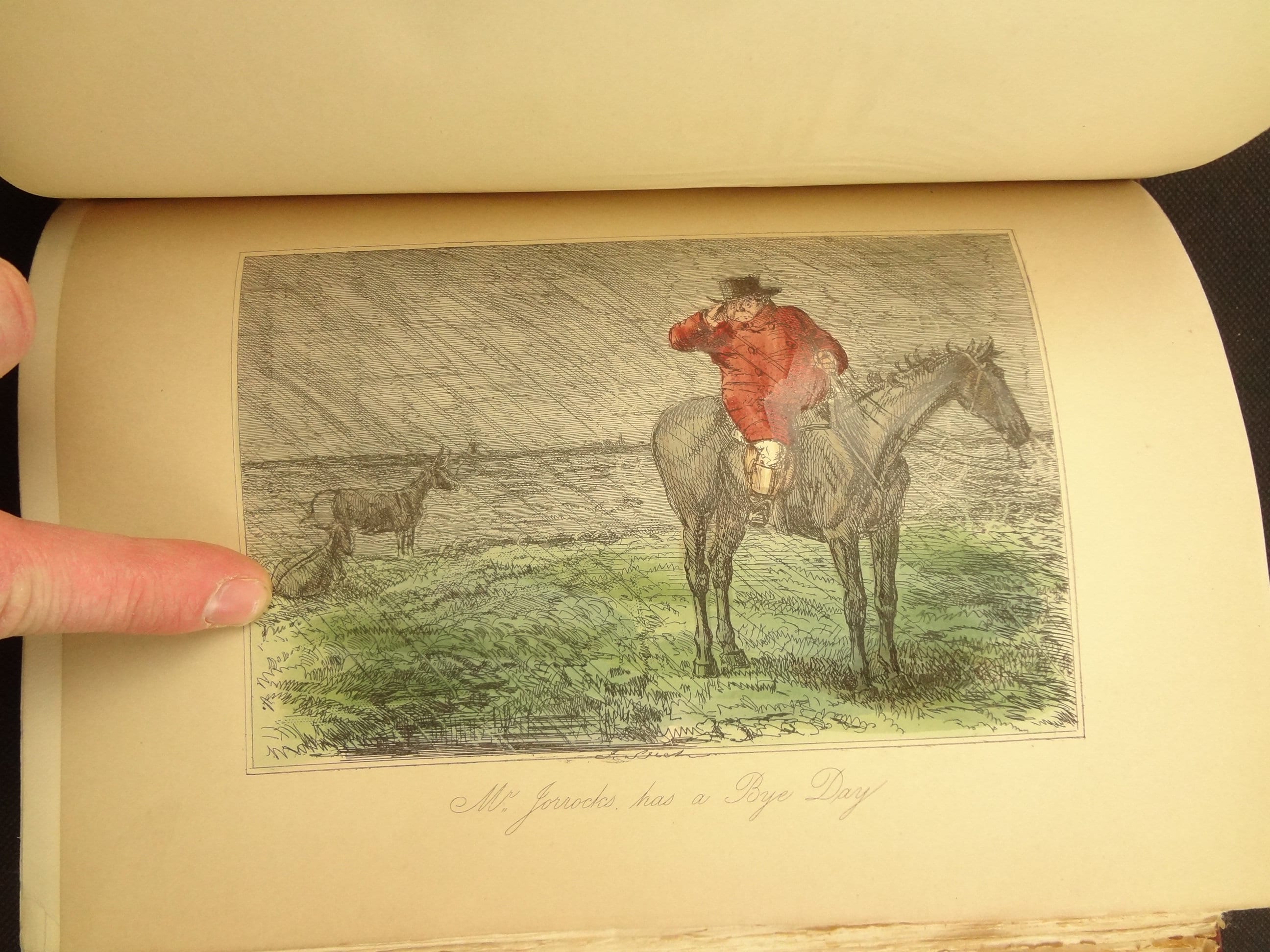 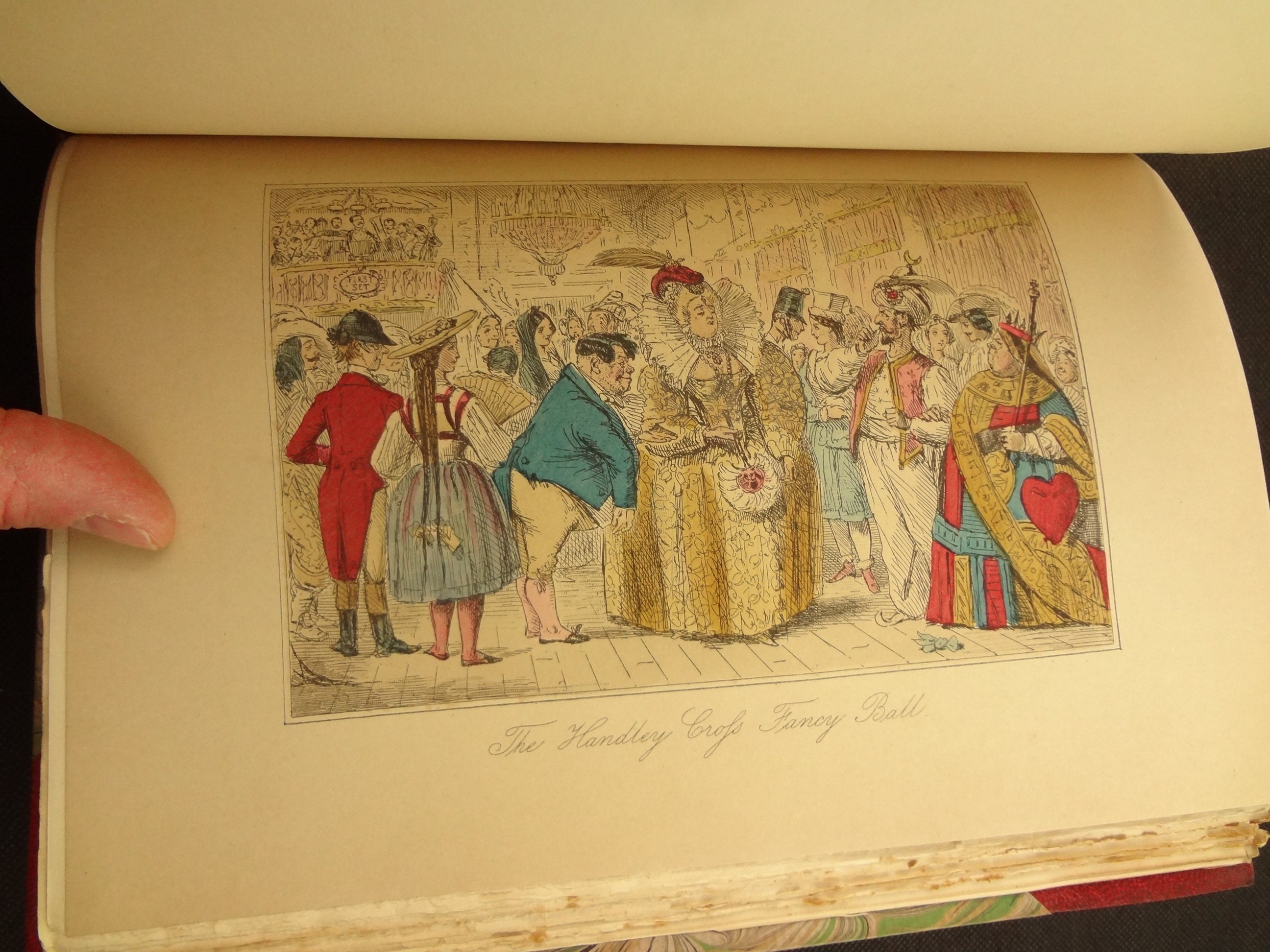 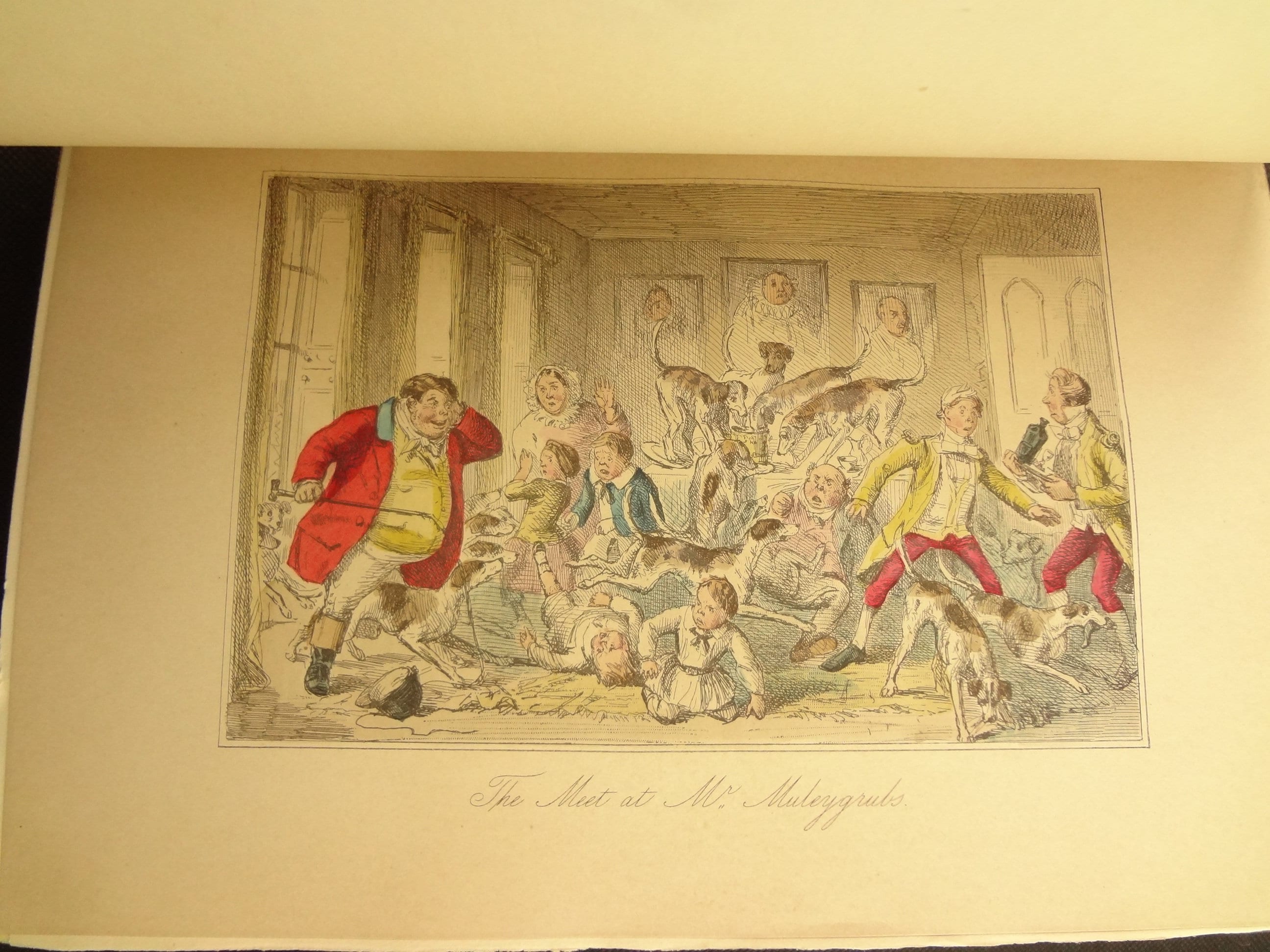 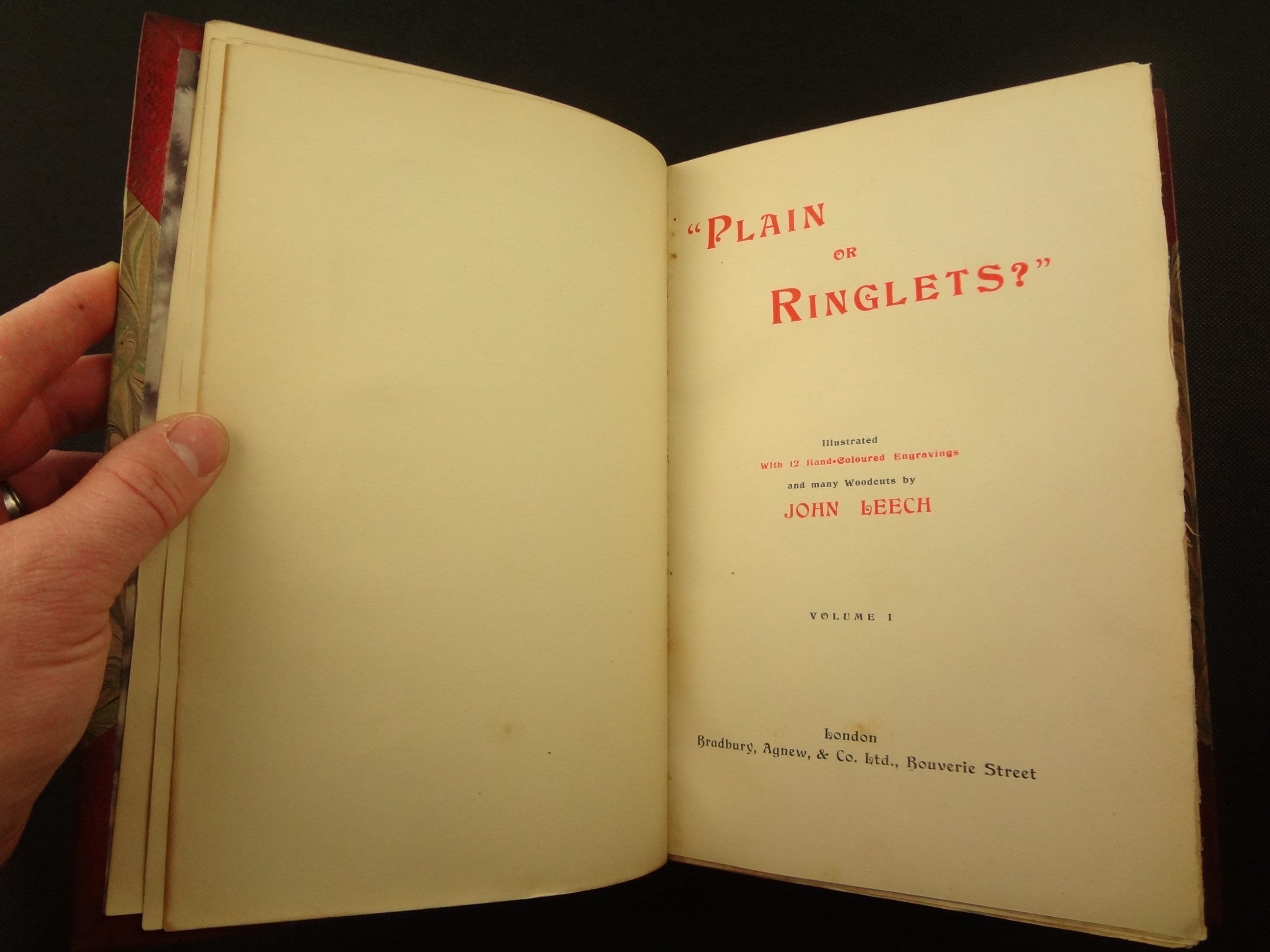 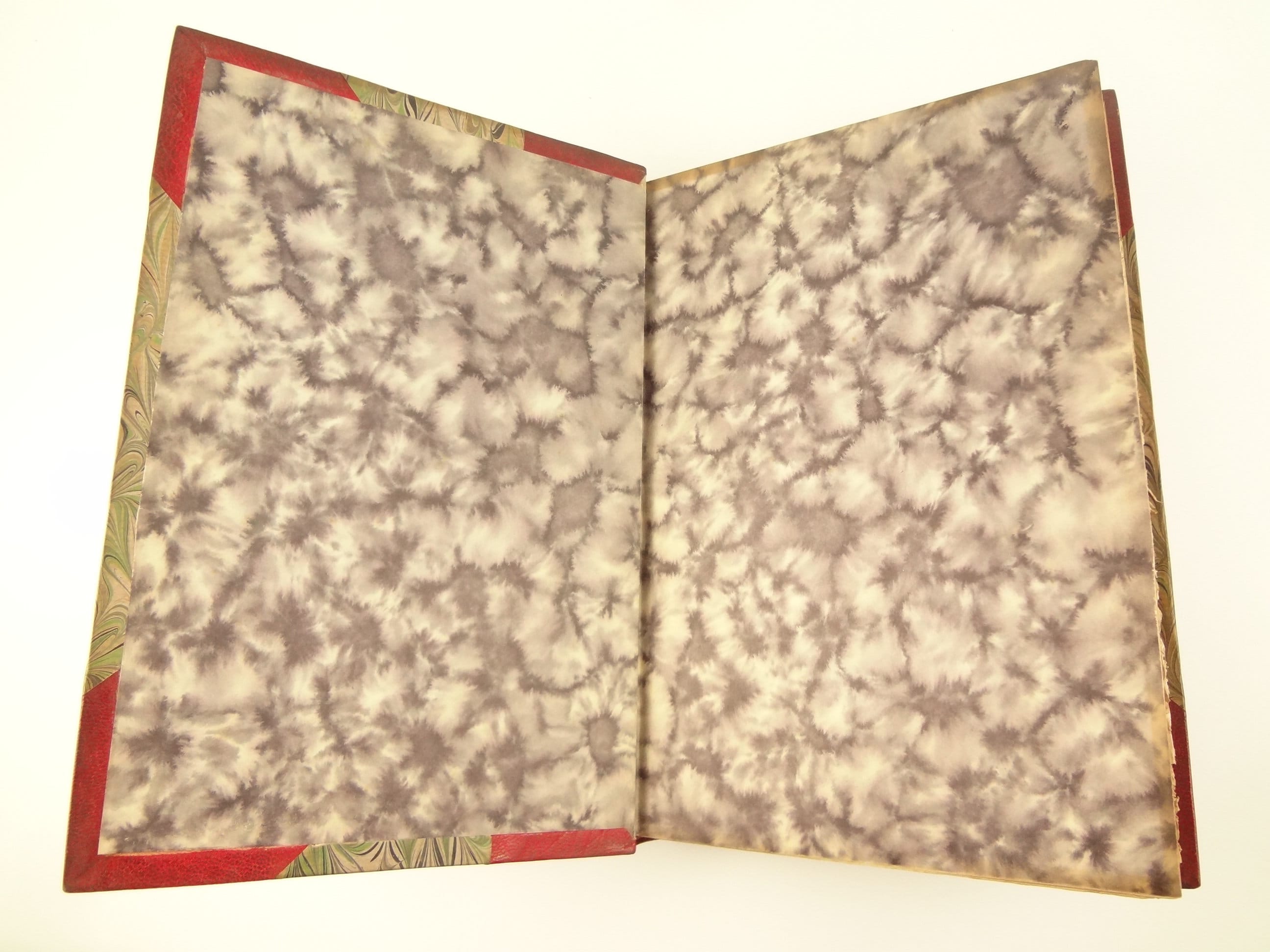 Three works, finely bound in five handsome volumes, of R.S. Surtees, with thirty-seven hand coulored illustrations (pochoir, each plate was individually coloured) and many more wood engravings. The illustrations by Leech are especially well-regarded, and Surtees' biting wit is, perhaps, more enjoyable now than in Victorian England. Surtees was a "sporting" writer, and these works often involve hunting; perhaps these would be a fun and treasured gift for the sporting hunter/book reader in your life?

“Surtees was not among the most popular novelists in the nineteenth century. His work lacked the self-conscious idealism, sentimentality and moralism of the Victorian era; the historian Norman Gash asserted that ‘His leading male characters were coarse or shady; his leading ladies dashing and far from virtuous; his outlook on society satiric to the point of cynicism.’ Thomas Seccombe, writing in 1898 for the Dictionary of National Biography, said that it was the illustrations of Leech that gave Surtees' work any notability: ‘The coarseness of the text was redeemed in 1854 by the brilliantly humorous illustrations of John Leech, who utilized a sketch of a coachman made in church as his model for the ex-grocer. Some of Leech's best work is to be found among his illustrations to Surtees's later novels, notably Ask Mamma and Mr. Romford's Hounds. Without the original illustrations these works have very small interest.’ However, for the very reasons that the Victorians deprecated him, Surtees' work has continued to be read long after some of his more popular contemporaries have been forgotten.” - Wikipedia

Each vol. measures approx. 25 x 17 x 3.25 cm. Leather spines, with leather corners (about 1/2 covered), and marbled paper boards. Five thick raised cords on the spine, breaking it into six compartments, each with some form of decoration in gilt (three with central star burst, the other three with title, author and volume); London, in gilt, across the bottom. Top edge gilt (TEG). Decorative endpapers. Multicolored endbands. Two of the works have twenty-eight pages of period advertisements bound at the rear.

Inside: mostly clean, easy to read and enjoyable. Pages were opened (not cut by binder, opened by reader and knife). There is light, occasional foxing throughout, as well as an occasional thumb mark. All plates have toning to their paper. Most have pencil bookseller/binder notes on 1st blank endpaper and last. V1, Plain has a corner of tissue and engraving loss at 295, only in the margin. Tissues guarding the pochoir steel plates all in place. Hadley Cross V1 - Very small worm hole in bottom margin to page 75 and two similar in top margin no deeper than 21. Also V2 has two tiny worm holes starting at title page which continue to page 23. Grange has very slight separation between front endpaper and text block and black spot at 86-87. Grange also has one tiny worm hole towards the rear in the bottom margin.