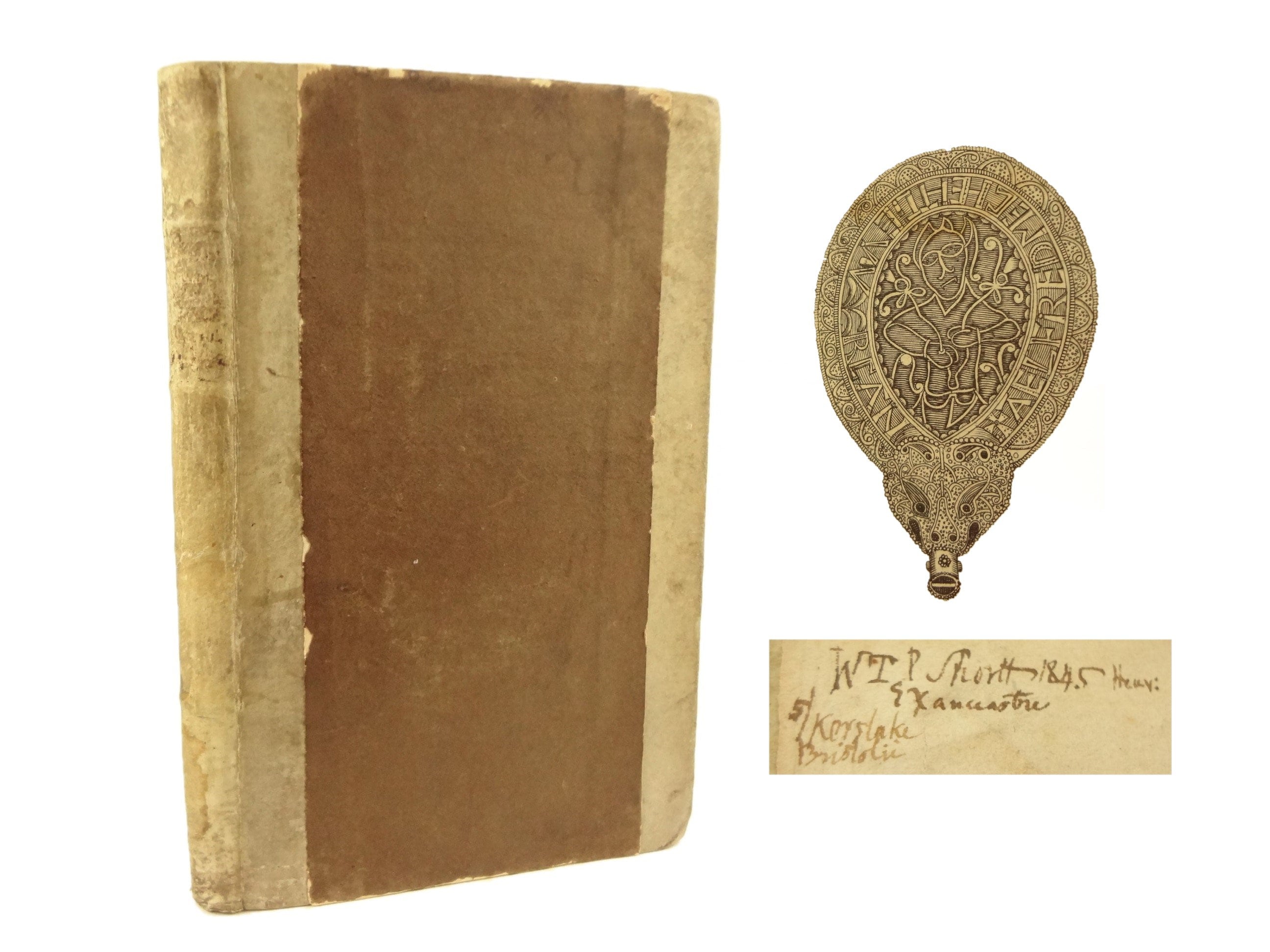 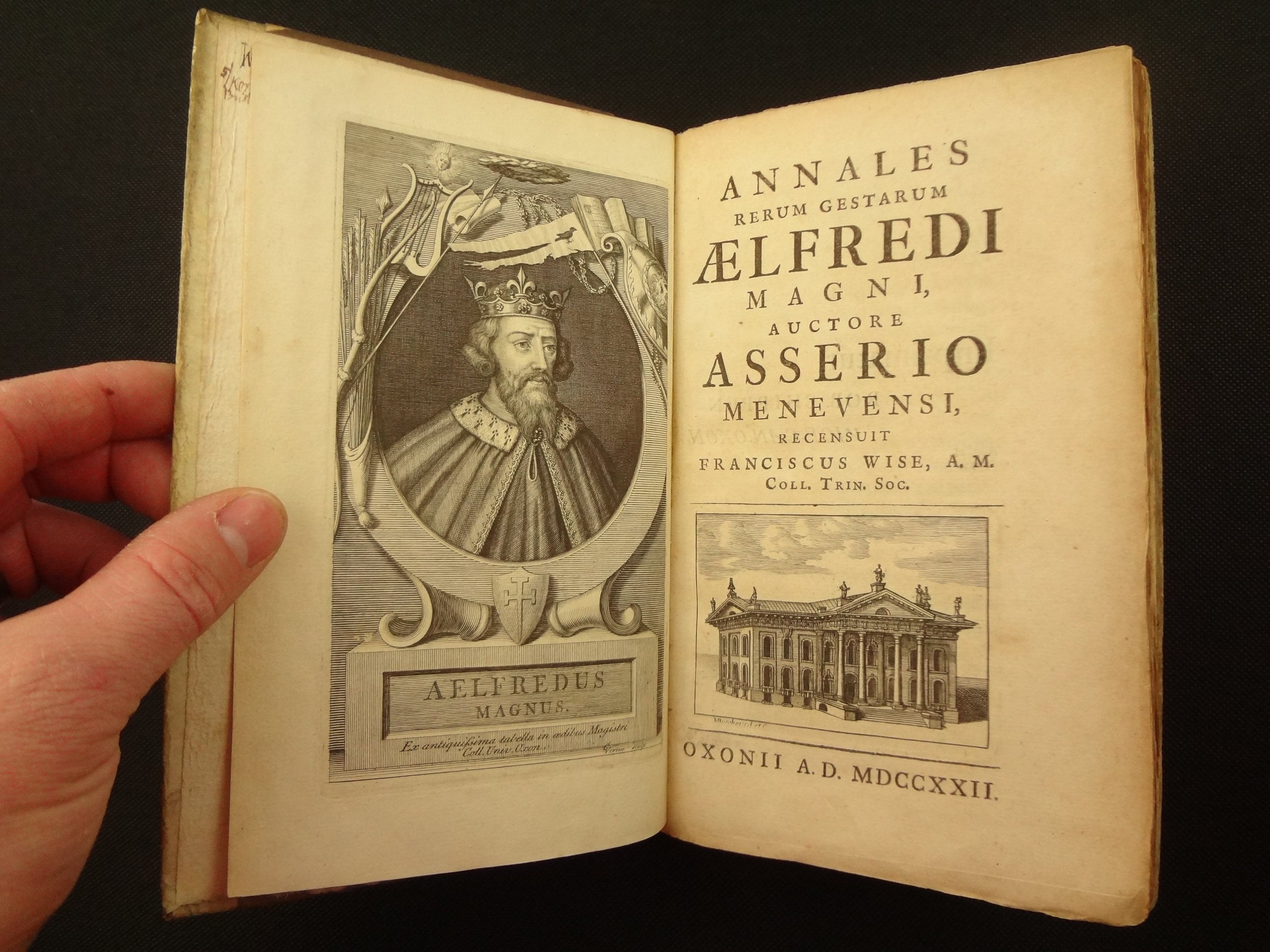 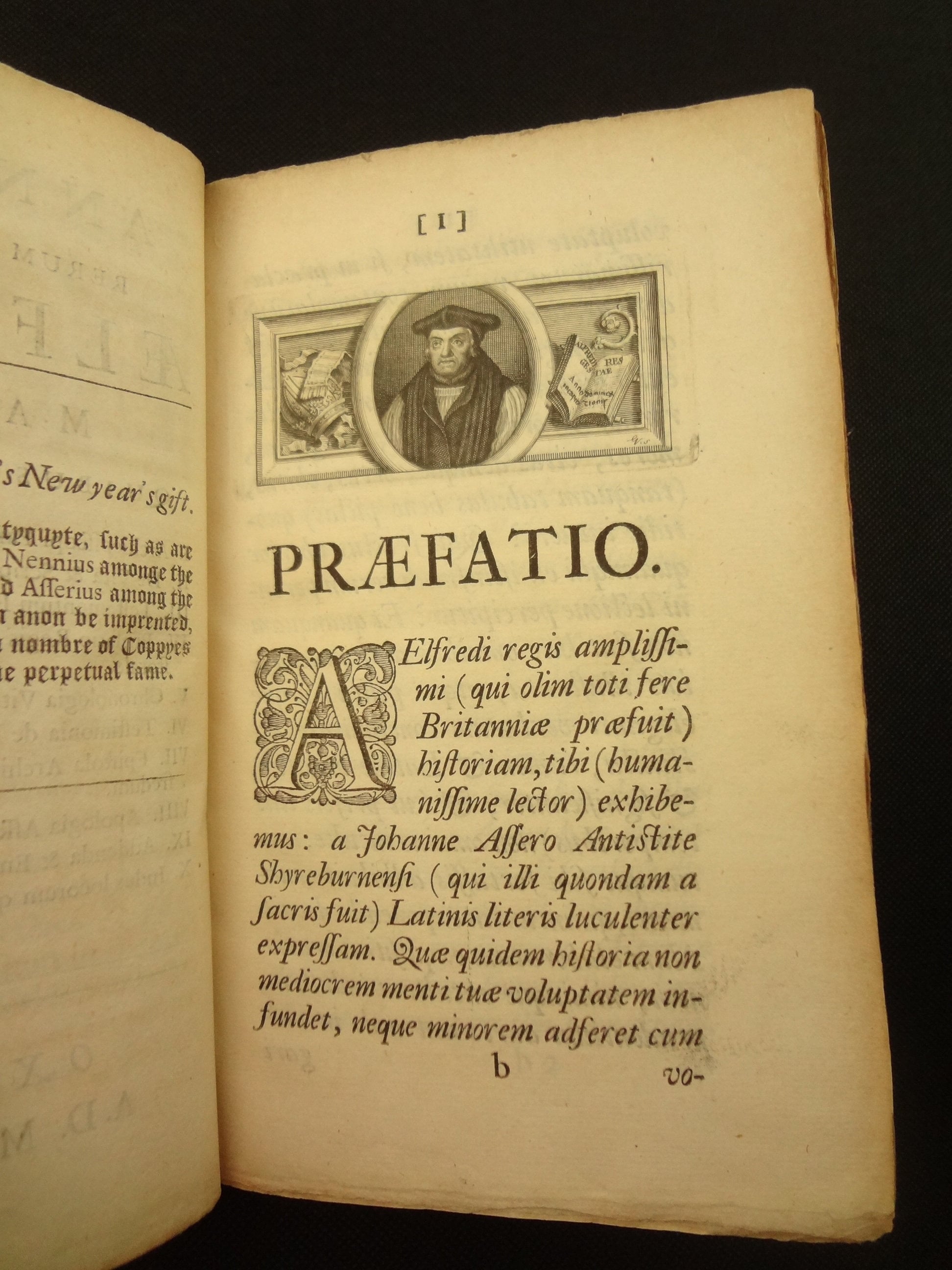 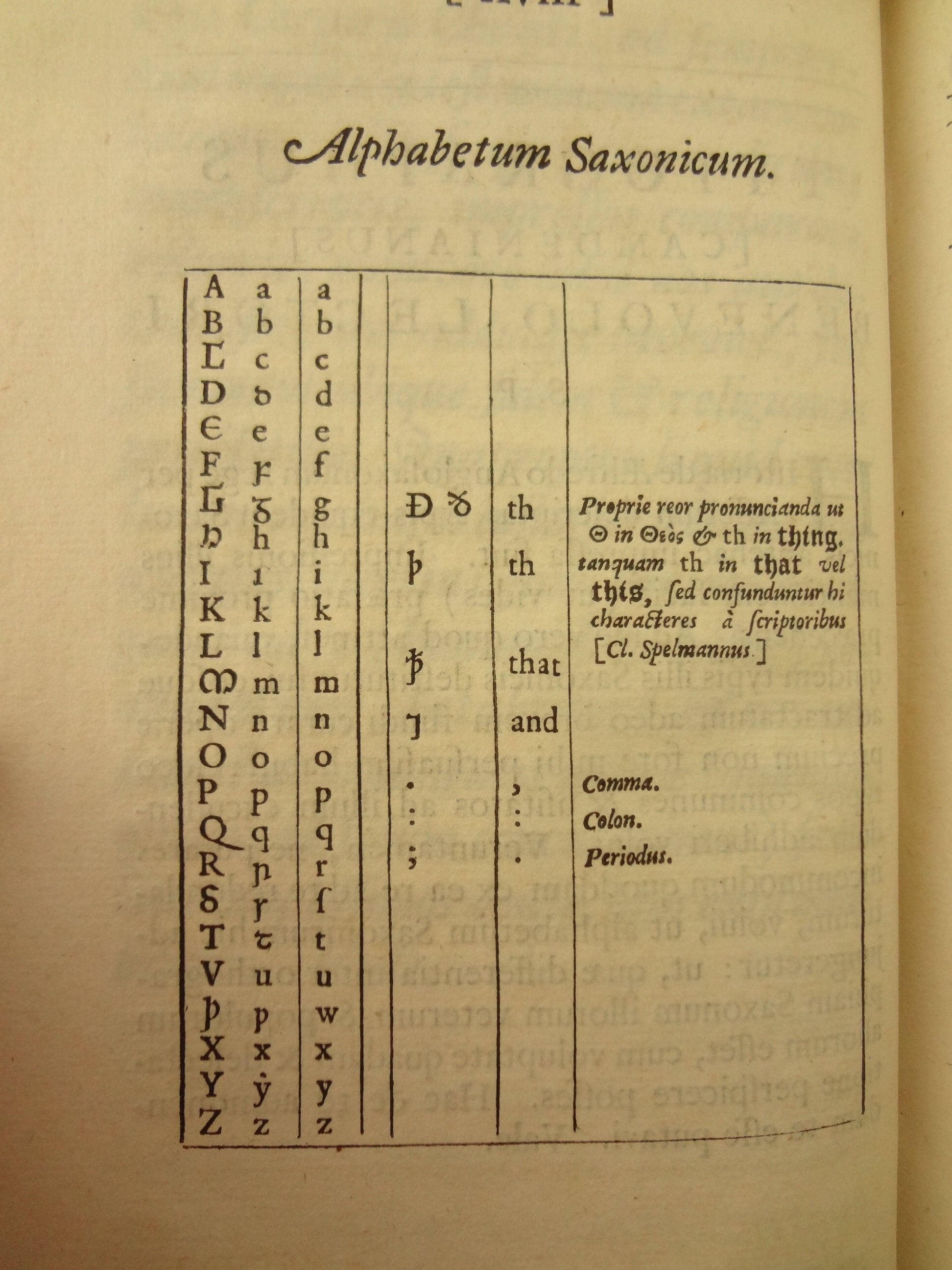 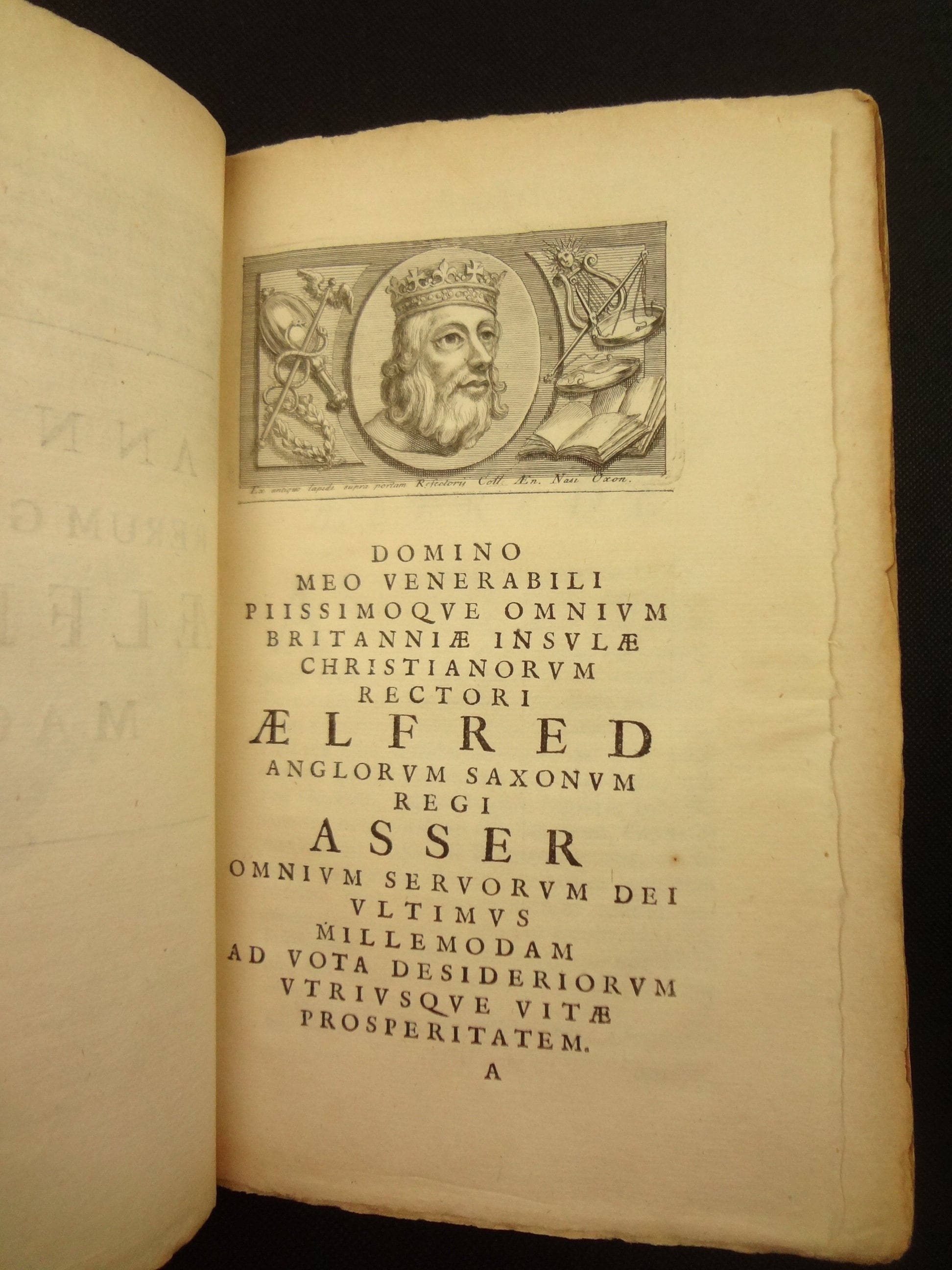 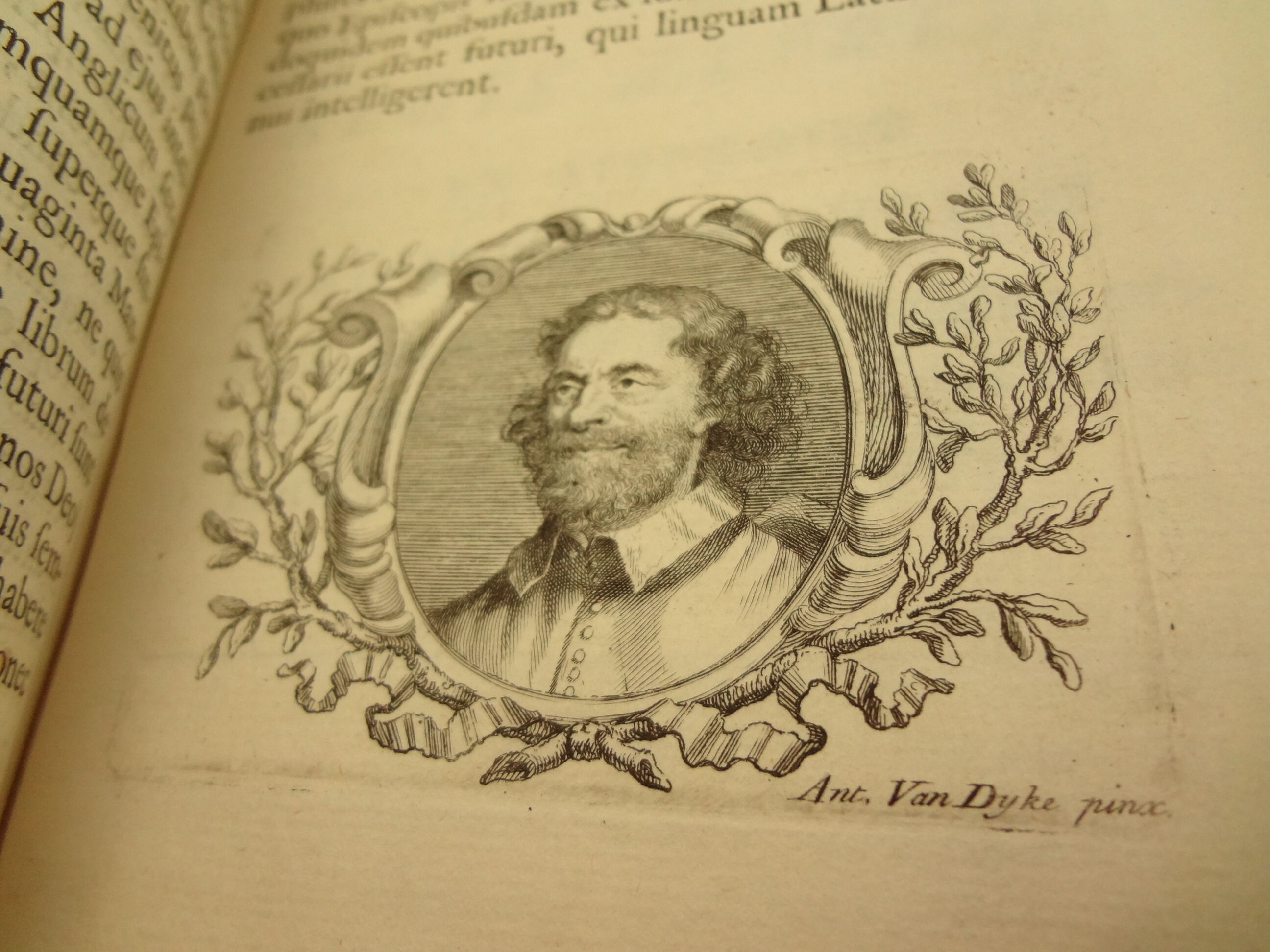 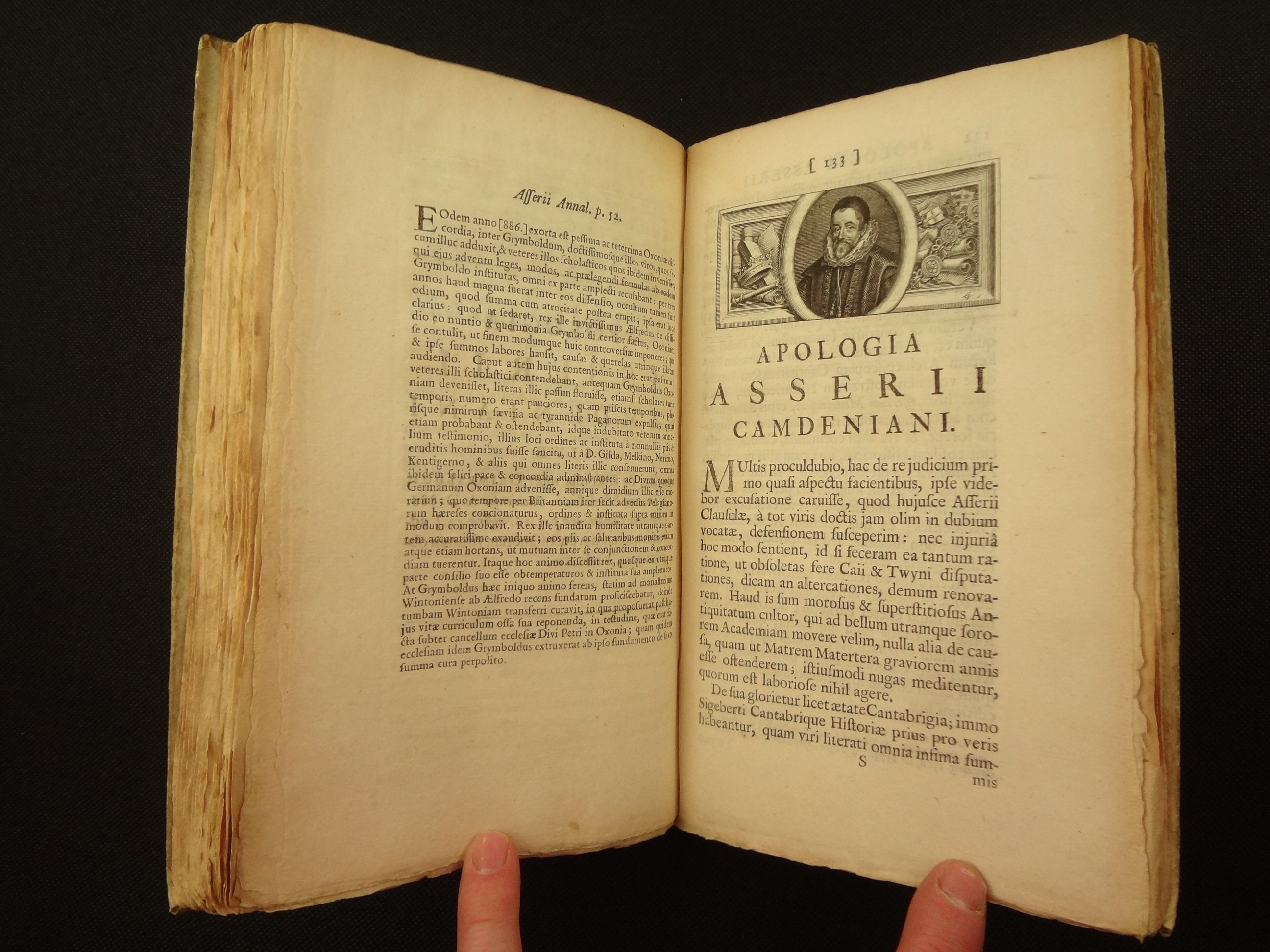 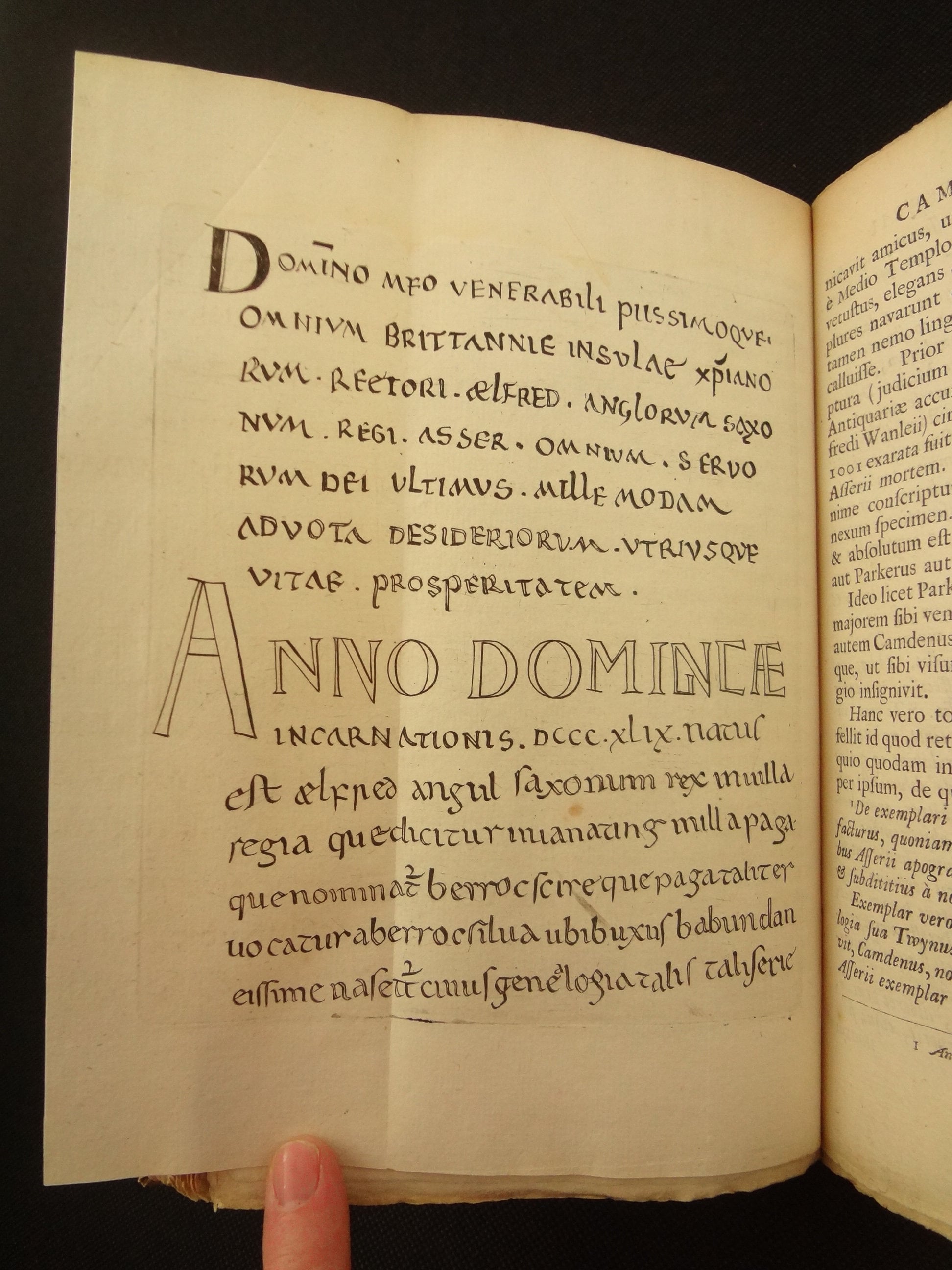 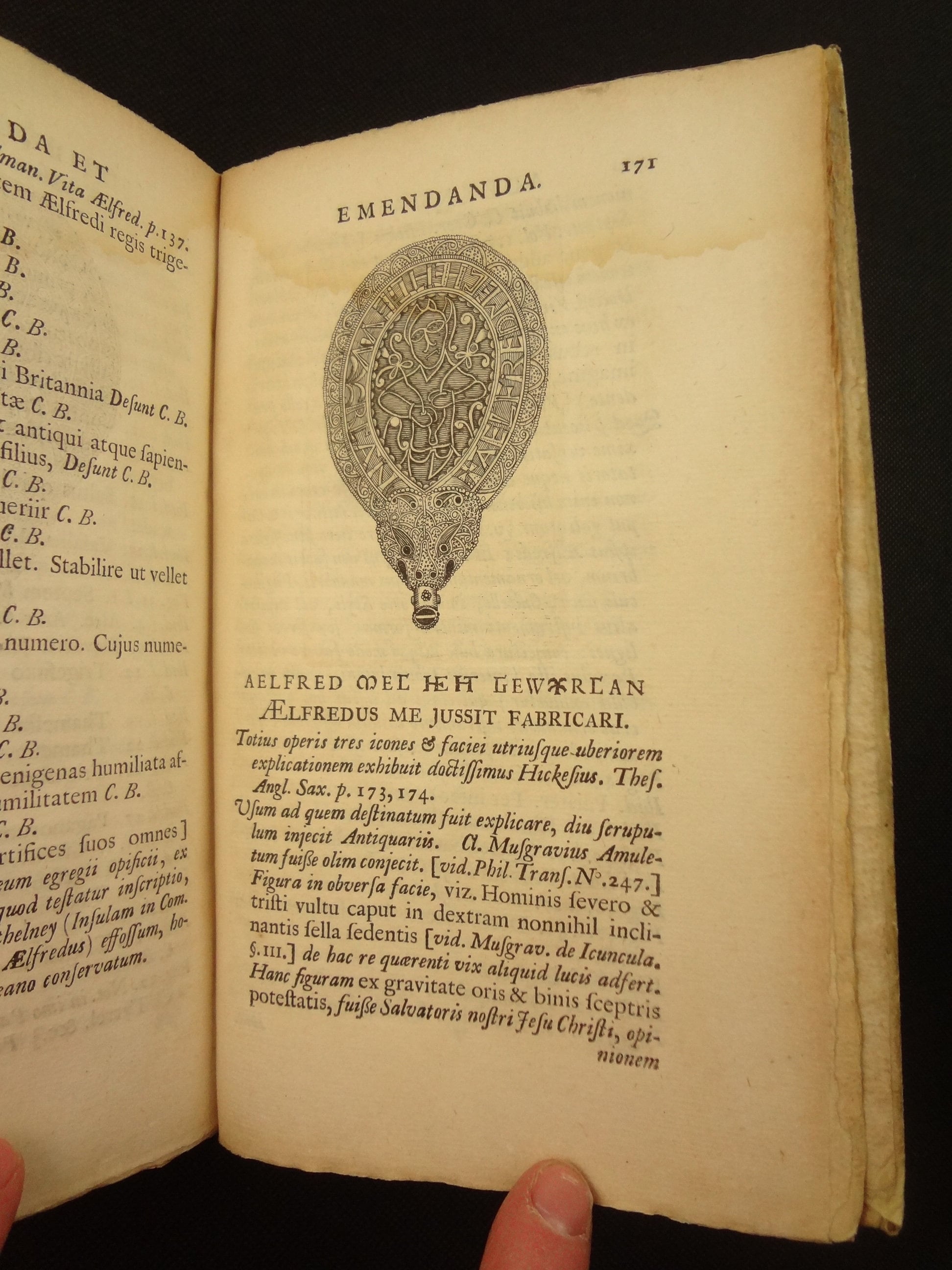 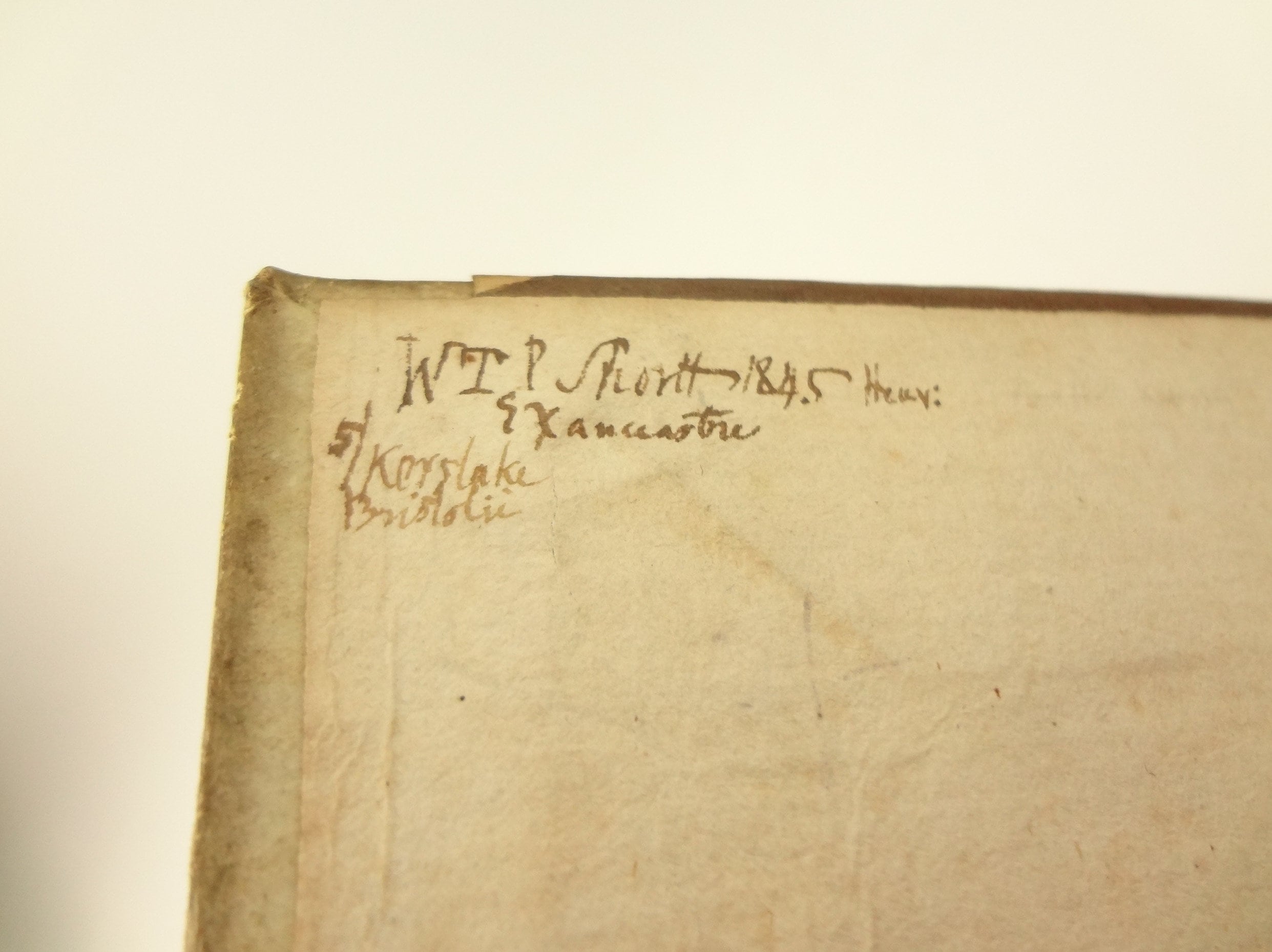 An important antiquarian work, with interesting provenance. This 1722 printing of Asser's Chronicles of Alfred the Great were taken by the editor, Francis Wise, from the only (then) extant manuscript of Asser, housed in the Cotton Library; in 1731 a fire destroyed the manuscript, leaving this as one of the best sources of Alfred the Great's achievements.

In the 19th century, an antiquarian named W.T.P. Shortt placed his name inside the front board; Shortt was was a member of the Numismatic Society of London and of the British Archaeological Association. Shortt wrote Sylva Antiqua Iscana, published in 1841, and the Archaeological Association printed a paragraph describing his work excavating/demolishing a leper house at Mary Magdalen's hospital.

At the time of this listing, this is the only copy I find available for purchase (Vialibri search).

“Asser (died c. 909) was a Welsh monk from St David's, Dyfed, who became Bishop of Sherborne in the 890s. About 885 he was asked by Alfred the Great to leave St David's and join the circle of learned men whom Alfred was recruiting for his court. After spending a year at Caerwent because of illness, Asser accepted. In 893 Asser wrote a biography of Alfred, called the Life of King Alfred. The manuscript survived to modern times in only one copy, which was part of the Cotton library. That copy was destroyed in a fire in 1731, but transcriptions that had been made earlier, together with material from Asser's work which was included by other early writers, have enabled the work to be reconstructed. The biography is the main source of information about Alfred's life and provides far more information about Alfred than is known about any other early English ruler. Asser assisted Alfred in his translation of Gregory the Great's Pastoral Care, and possibly with other works." – Wikipedia

"(1722), at Oxford, Francis Wise brought out a new edition of Asser’s AElfredi Vita. This has proved an interesting book to modern students, because it furnishes the only means of comparing the Parker edition of 1574 with the original manuscript. Wise printed from this manuscript, which was destroyed in the Cotton fire; and, by comparing the two editions, it has been possible partly to disentangle the original manuscript-sources from Parker's interpolations. He has also preserved a specimen of the original manuscript-hand—but, unlike Parker, he prints this Latin life in Roman characters. To this he appends Alfred's Old English preface to Gregory’s Pastoral Care. Wise was a man of far more scholarly attainment than the men who immediately succeeded him as editors. He was intimately acquainted with the libraries of Oxford, where, after taking his degree at Trinity, he became first an under-librarian at the Bodleian, and then for many years the head of the Radcliffe library. He was on terms of intimate friend ship with Dr. Arthur Charlett, who, he says, urged him to under take the edition of Asser." - Old English Scholarship in England, Eleanor N. Adams, 1917

See pictures. Well worn, title expired from spine, and the rear board has a small moisture mark near the bottom and the front boards top right corner has similar mark. Edge and shelf wear to binding.

19th century ex libris on pastedown (inside front board). Pages are rough cut/opened by the purchaser, not the publisher. There is some toning to the paper throughout, as well as an occasional thumb mark and spot in the bottom margin. Page xxii, and 39 has a spot in the page, while 57 and 127 have ink blots. There is an occasional moisture mark at the top edge, darker near rear, that does occasionally extend down to the text. Despite any condition notes, it reads well and has a pleasing patina of antiquity.