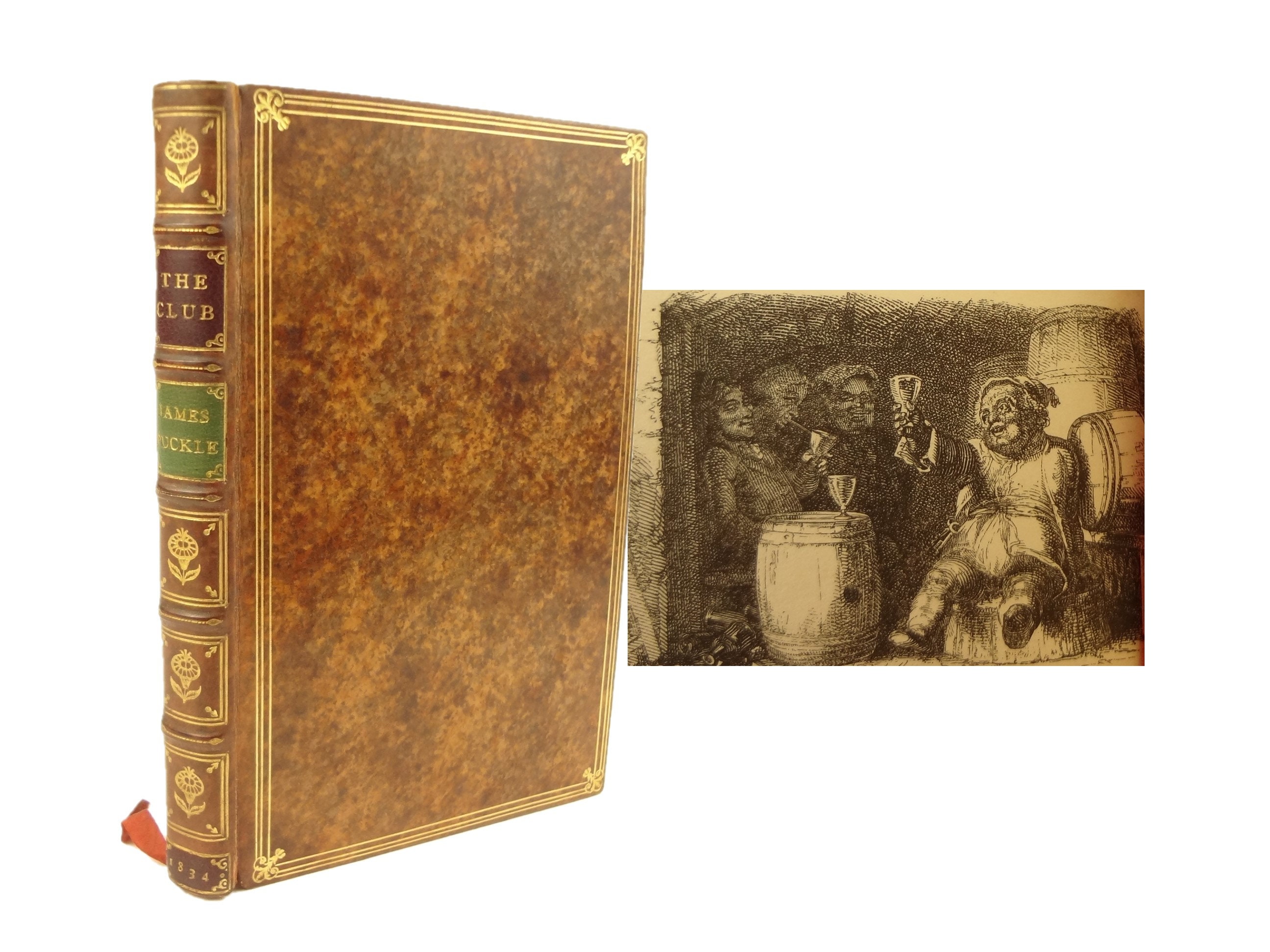 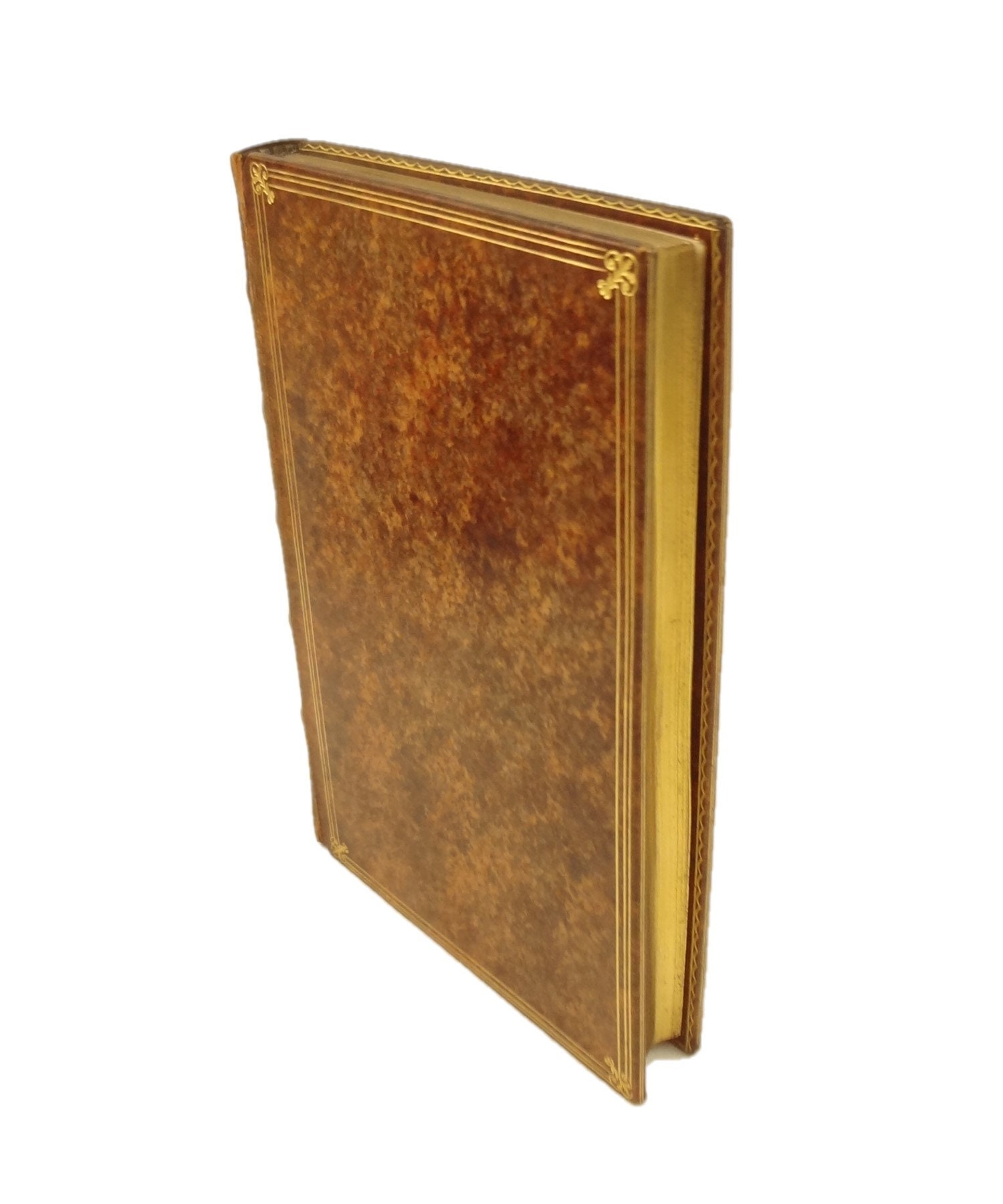 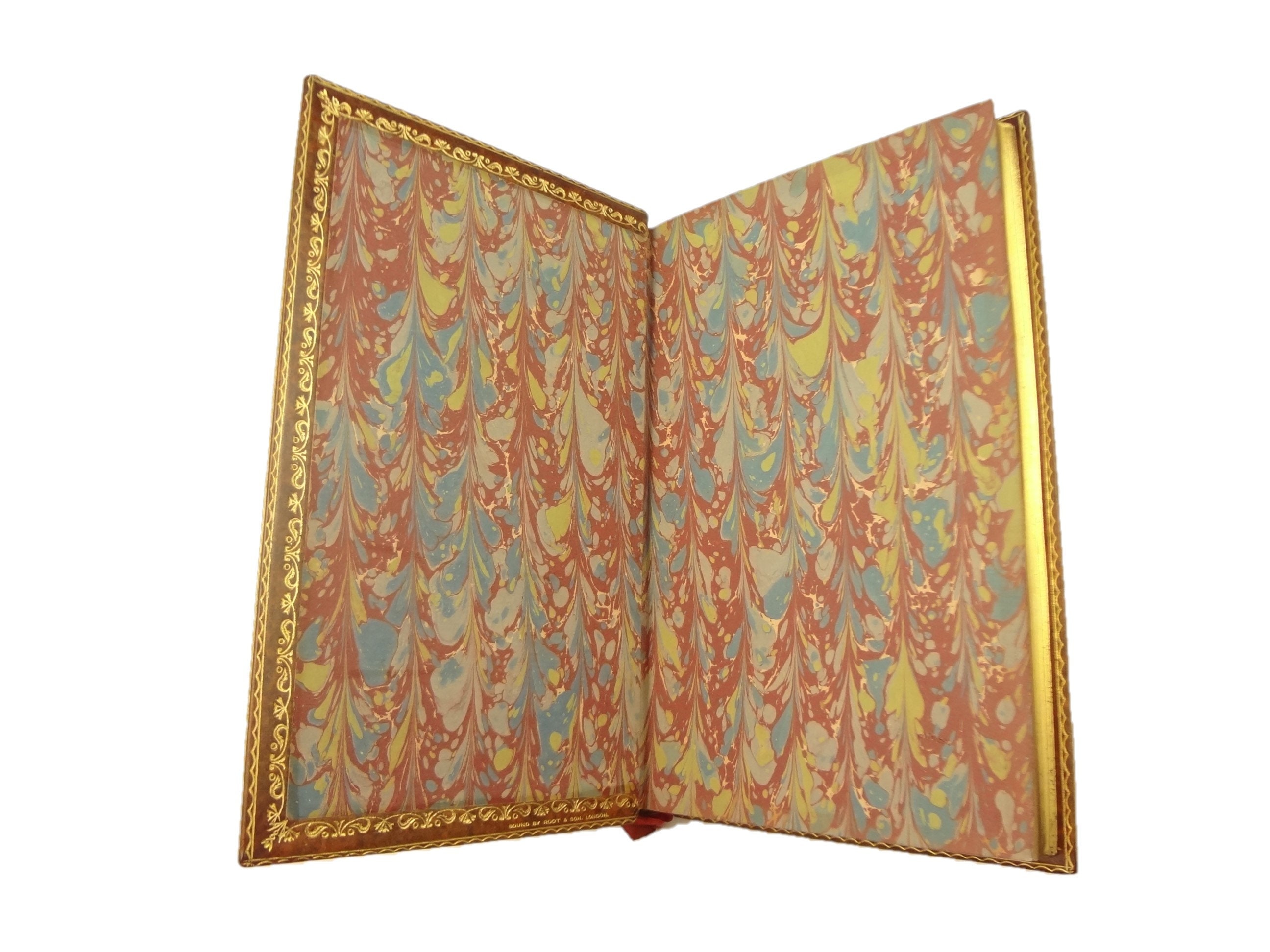 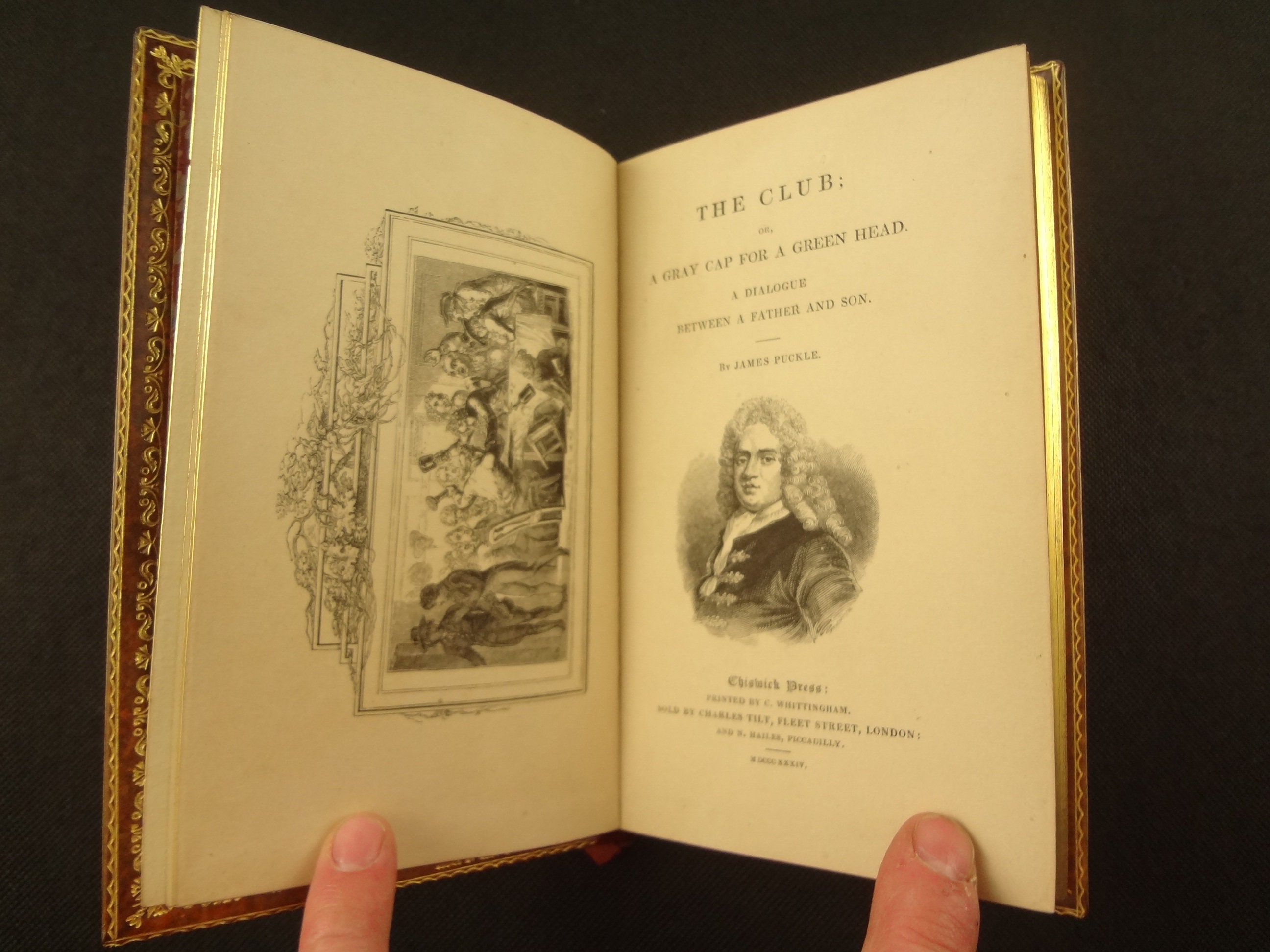 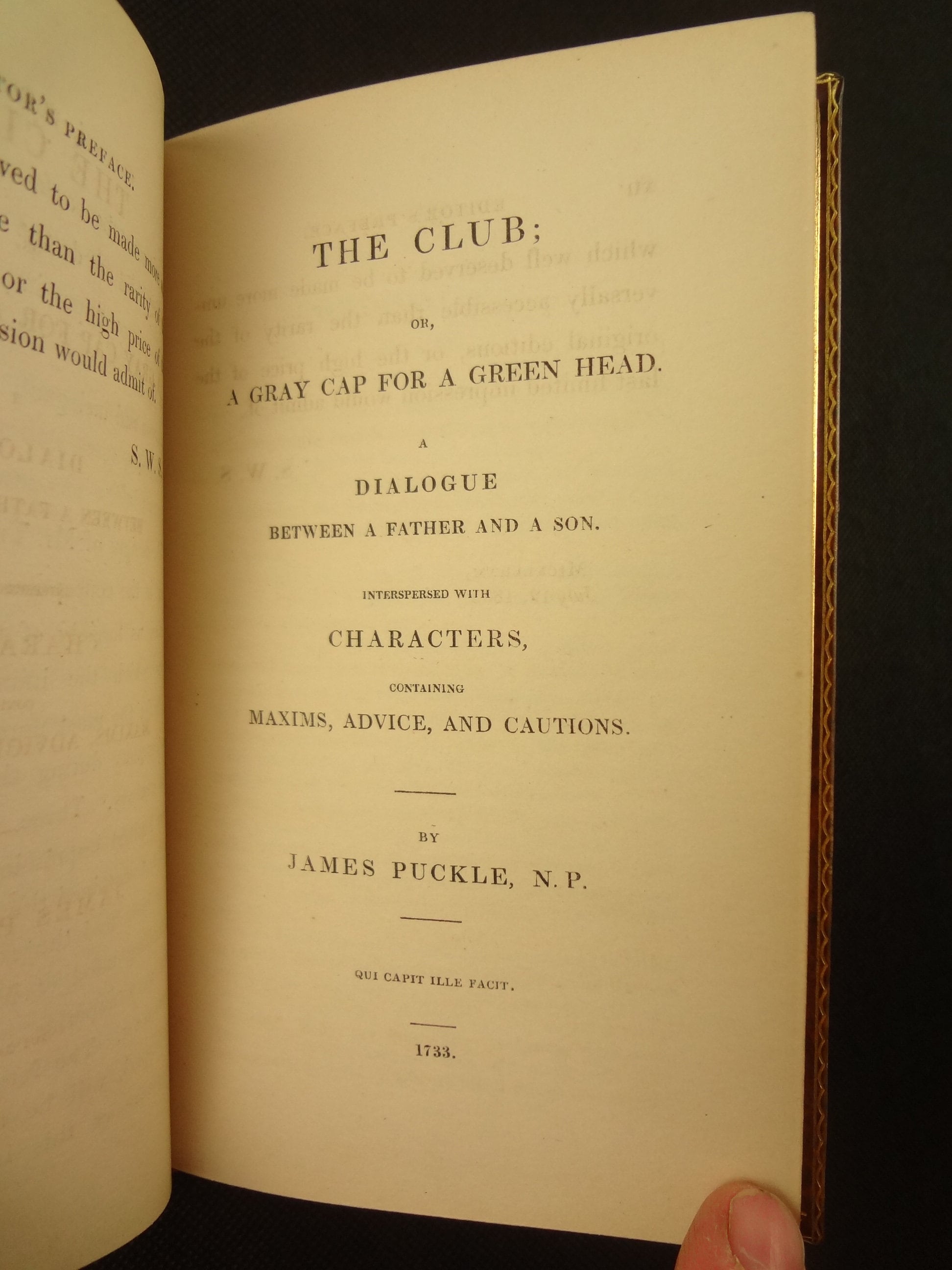 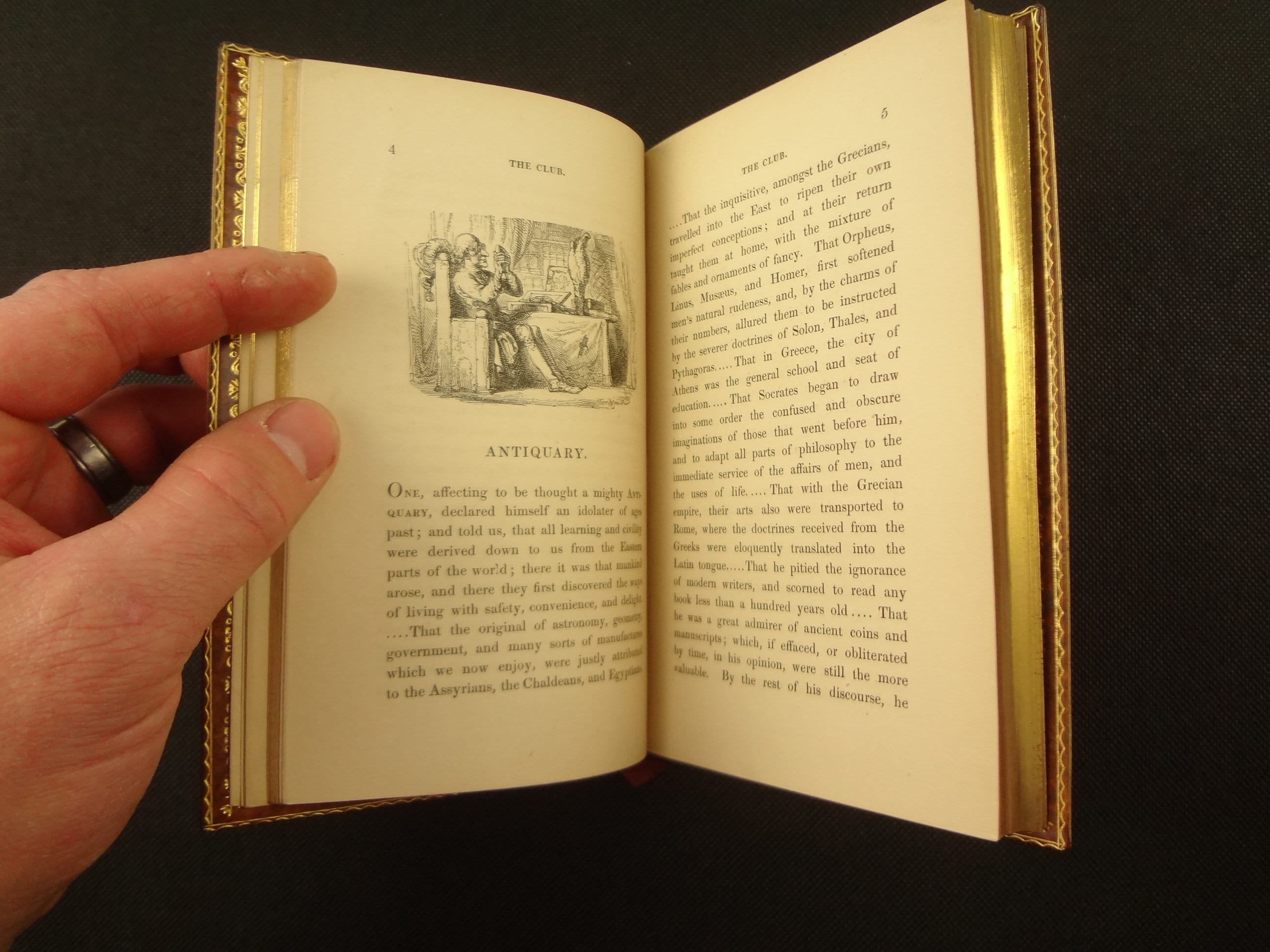 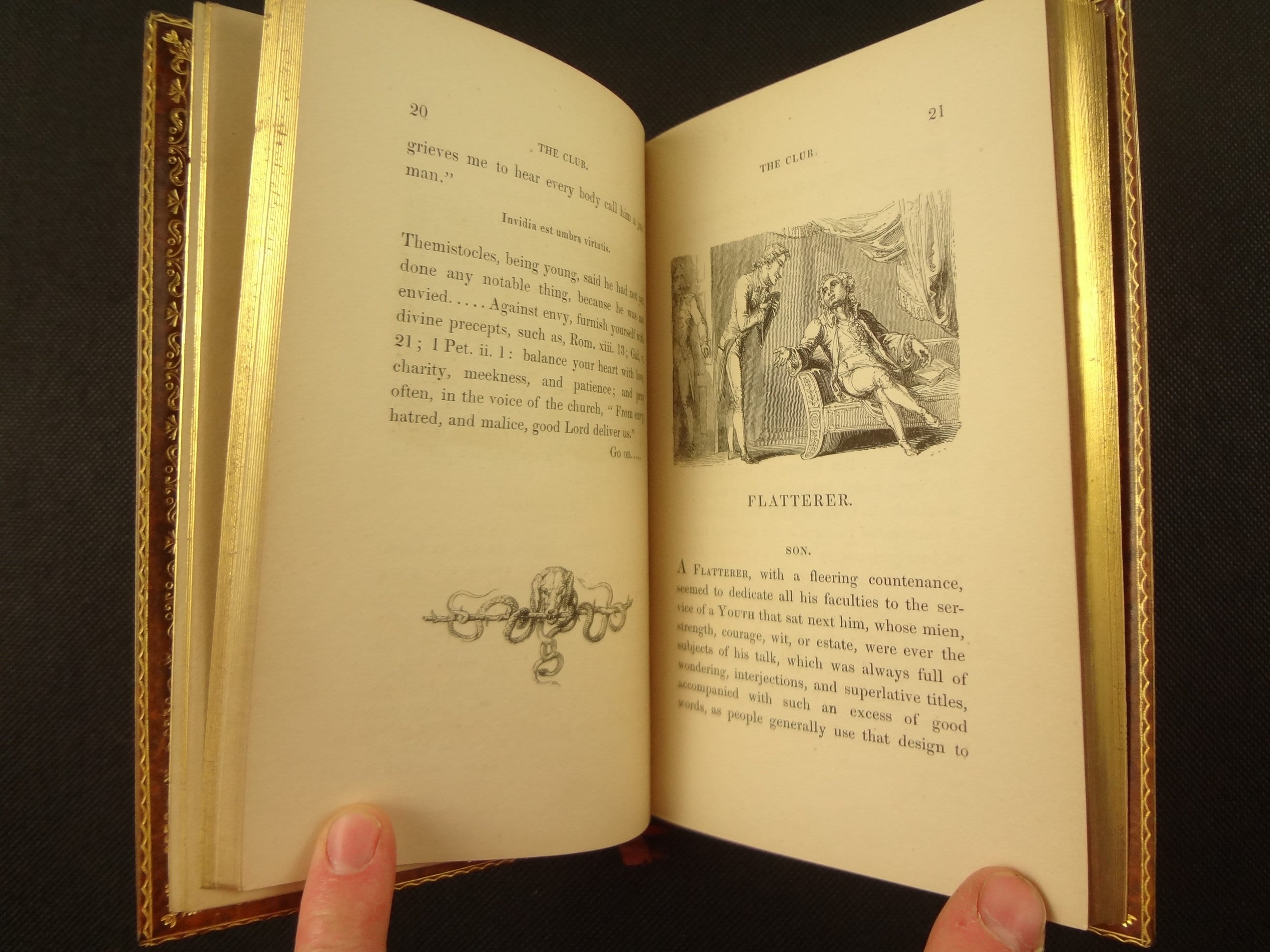 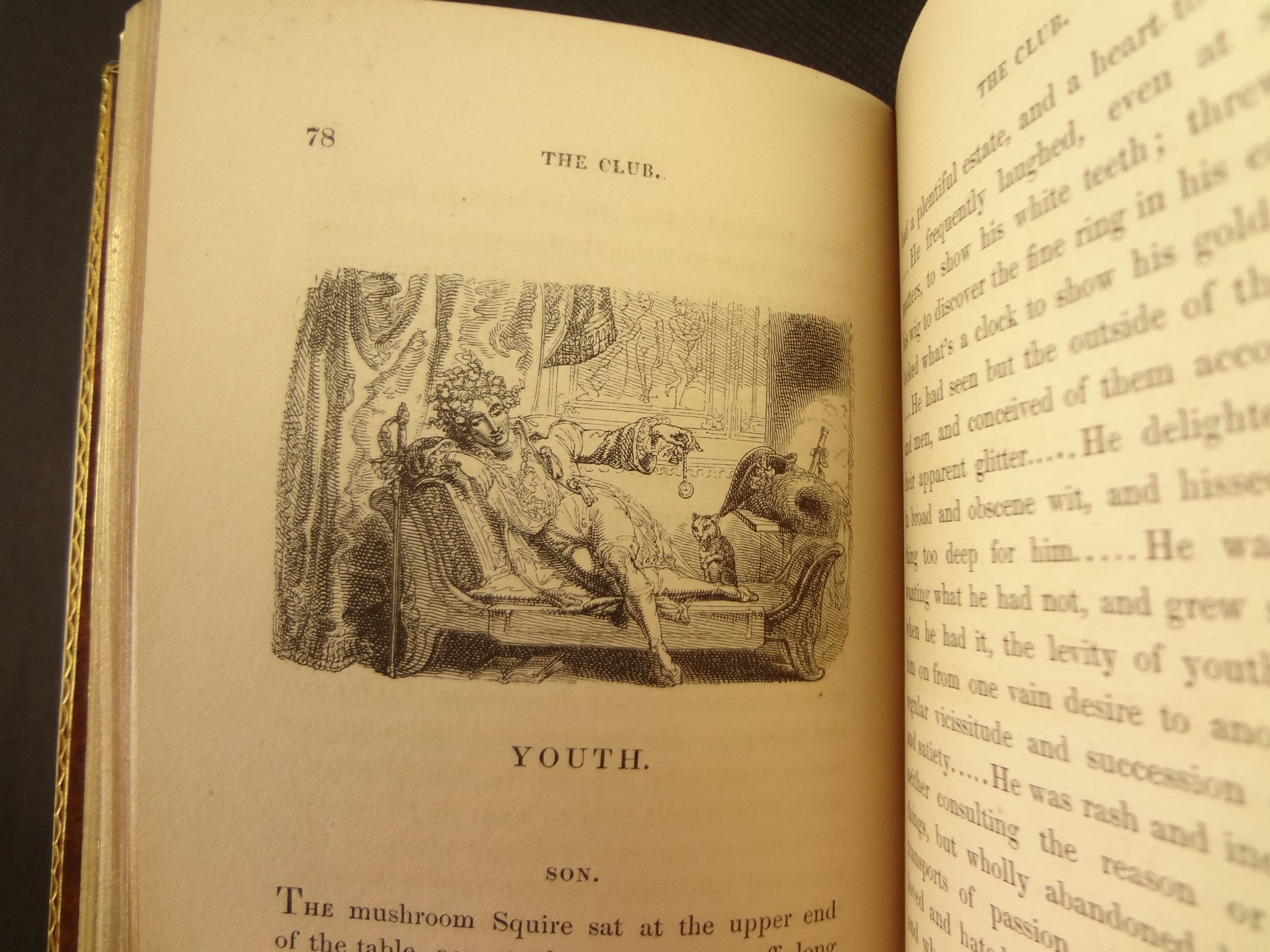 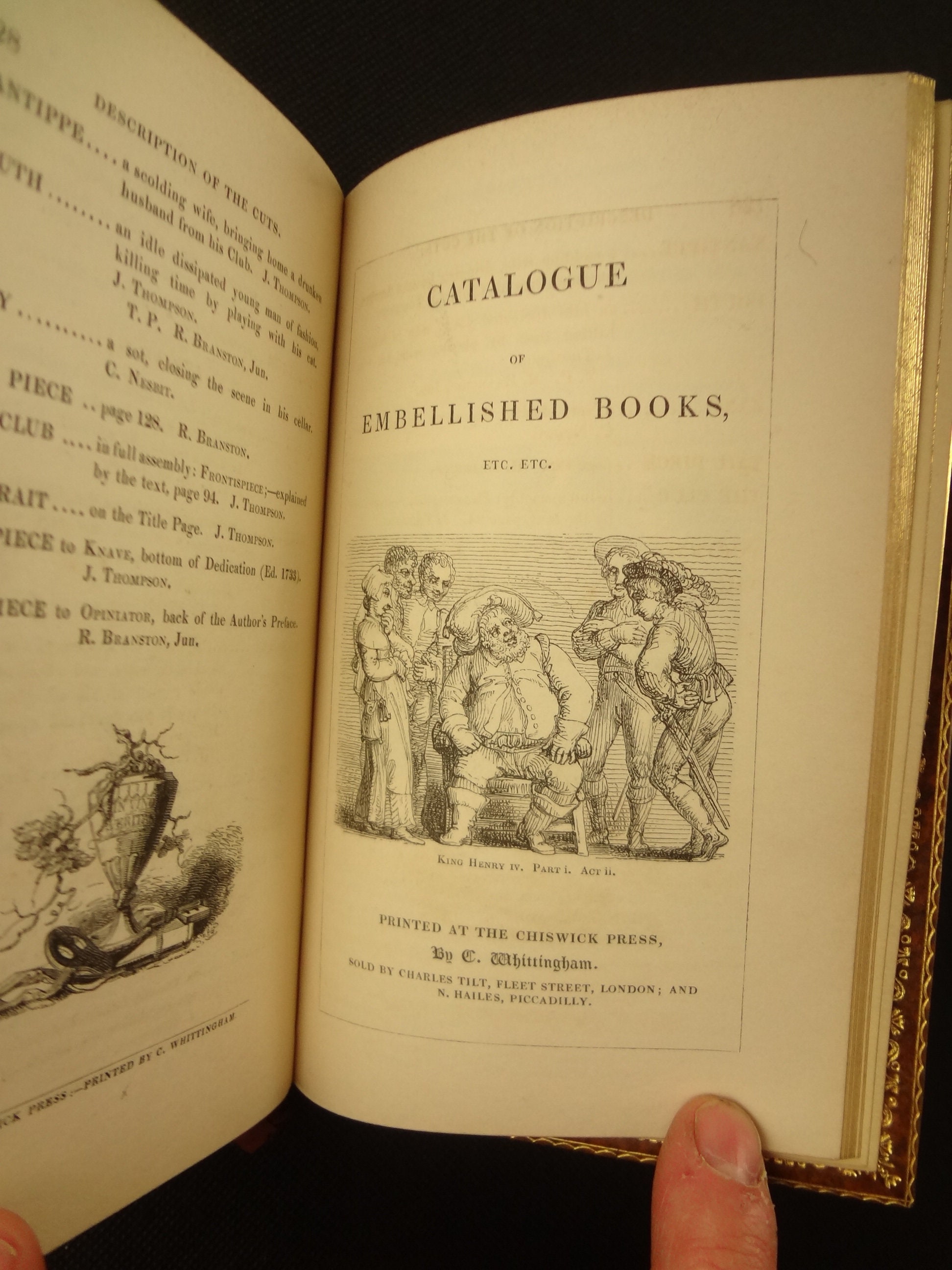 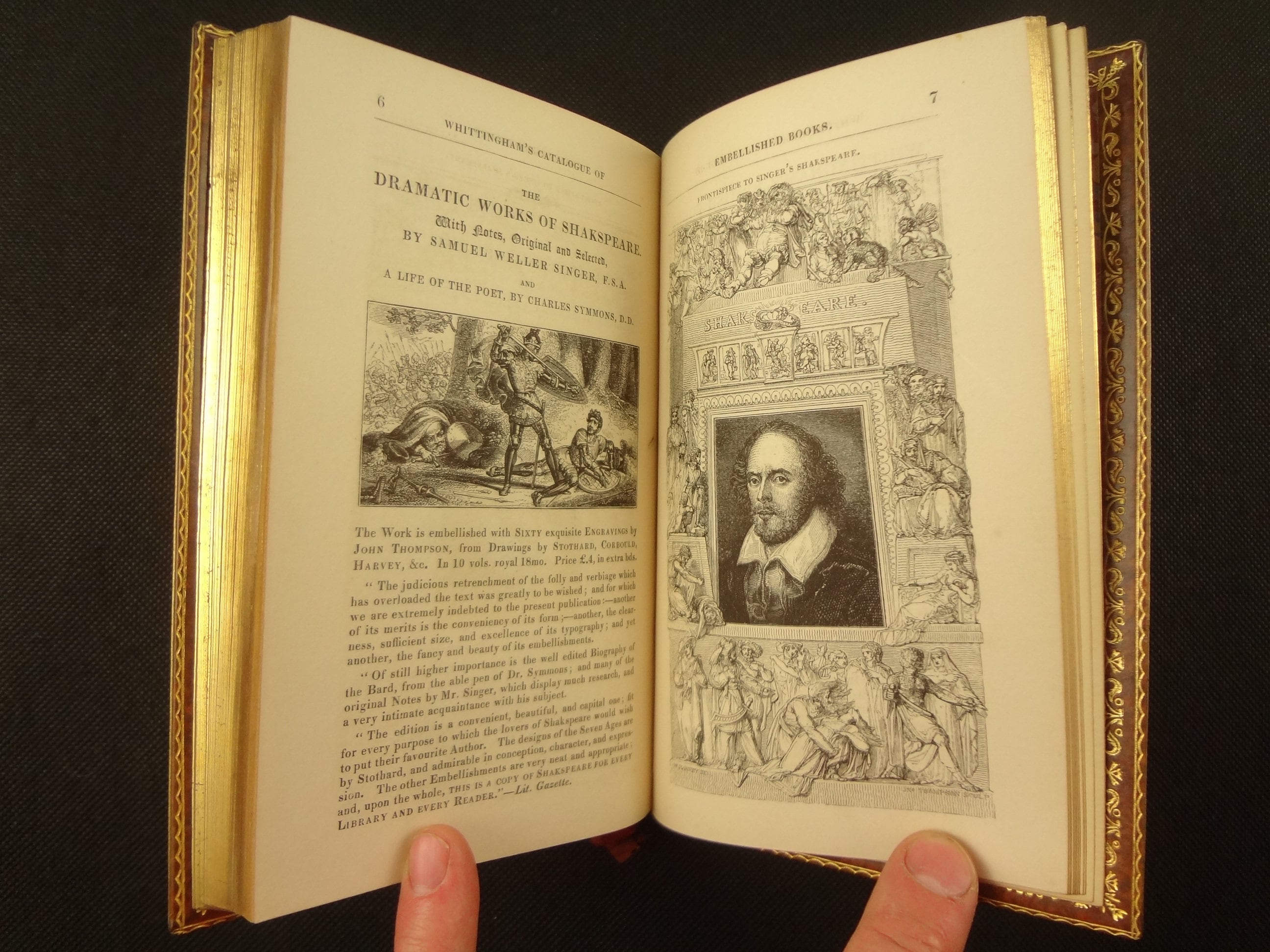 1834 The Club, or A Grey Cap for a Green Head, by James Puckle. Chiswick Press. Fine binding, Root and Son, London.

Bound, and signed, by Root and Son, this is a very handsome later printing (1834) of this early 18th century work (1711) that moralizes using twenty-five different characters from a night out at the club.

“Puckle's surest title to fame is as the author of 'The Club, or a Dialogue between Father and Son, in vino veritas,' London, printed for the author in 1711 (Gent. Mag, 1822, pt. i. p. 204). The volume is dedicated to two merchants, Micajah and Richard Perry, and to the memory of a third, Thomas Lane, who married Mary Puckle, a cousin of the writer. Puckle's book belongs to the class of collected character-sketches which Sir Thomas Overbury began and Earle brought to perfection in his 'Micro-Cosmographie.' A young man is represented by the author as having met one night at a friend's club, assembled at 'The Noah's Ark,' twenty-five typical personages, including an antiquary, buffoon, critic, quack, rake, and usurer, and he gives next morning a sprightly description of each of his companions to his father. At the close of each of the son's sketches the father interposes much sententious moralising on the habits of life of the person described. “

“The 1723 edition of Puckle's ‘Club’ was reissued in 1817, with many charming illustrations by John Thurston [q. v.], and a title-page and a few headpieces by John Thompson [q. v.] Thus embellished, the work reappeared in 1834 at the Chiswick Press, with a preface by Samuel Weller Singer [q. v.] The latter stated that Charles Whittingham, the printer and publisher, owned a manuscript by Puckle containing many moral dialogues between father and son, mother and daughter, and the like.” (1896, Dictionary of National Biography).

Measures approx. 16.5 x 10 x 1.75 cm. Full speckled calf binding. Board framed in gilt triple filet with corner florets. Five raised bands to spine, with six compartment; four compartments have a central flower (calla lily?) surrounded by a double filet frame with four corner flowers, one compartment with the author in gilt on green moroccan, one compartment with the title in gilt on dark moroccan, and the year at the bottom of the spine in dark moroccan. Double fillet around board edges. Turn in has in inner and outer roll, and the stamp of Root and Son, London. AEG (all edges gilt). Silk ribbon. Marbled endpapers.

A very nice book. The slightest of shelf wear at the top and bottom of the front joint. Spine perhaps faintly darker. Some bookseller and binder notes on the endpapers and last printed leaves of the book. I find a very occasional very small spot of fox. The last page of the book has a light thumbmark. Overall, a very handsome book.