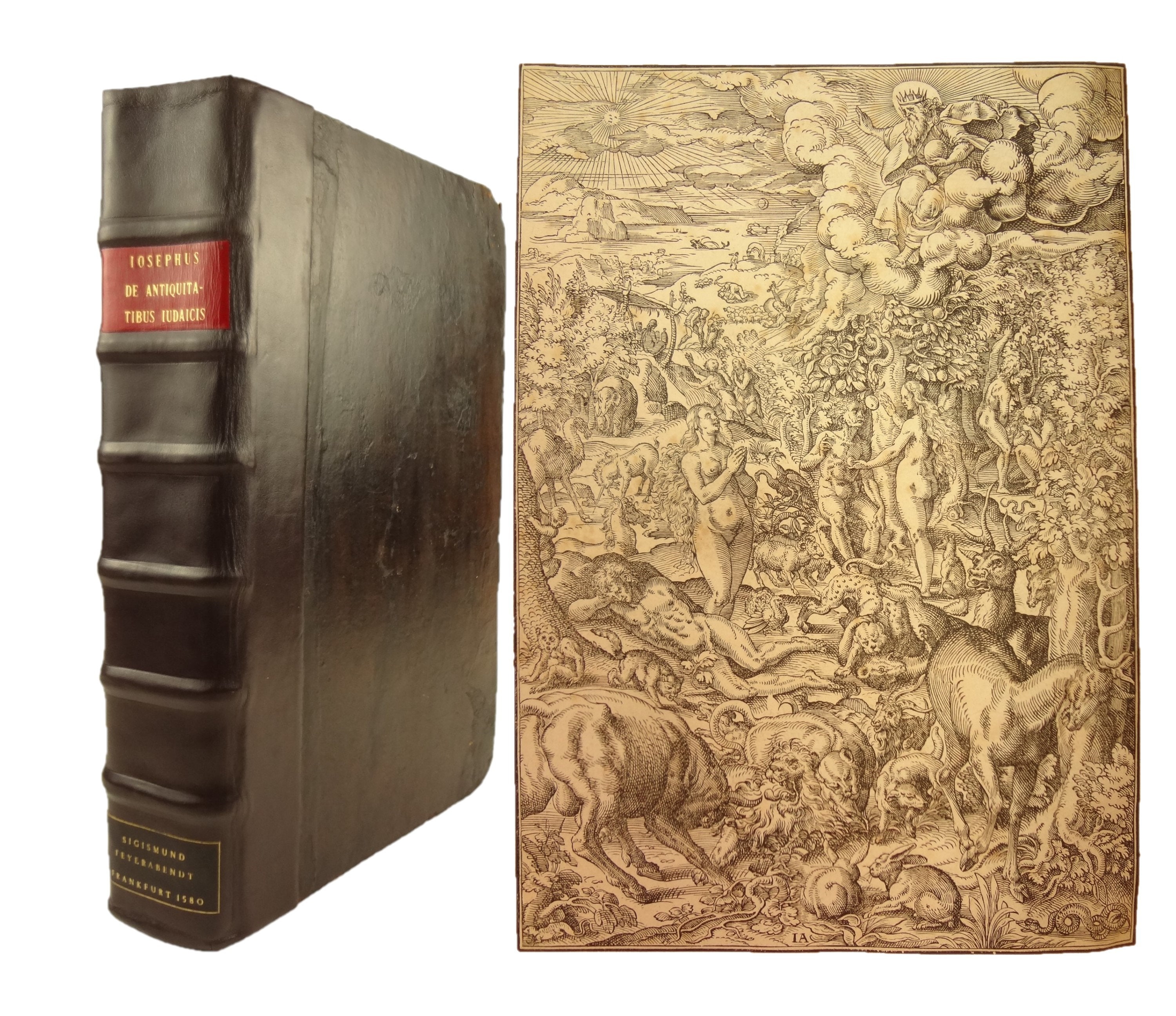 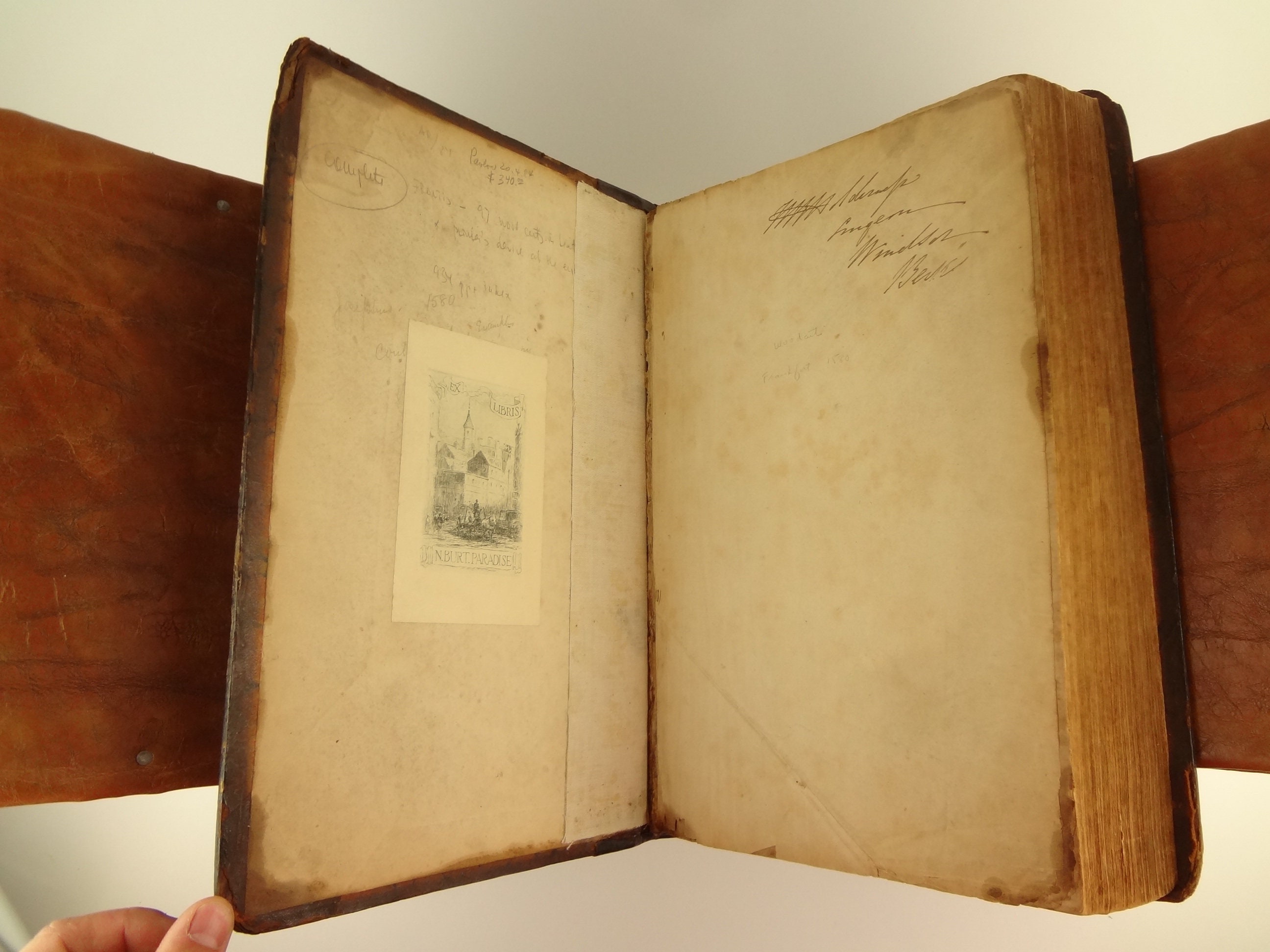 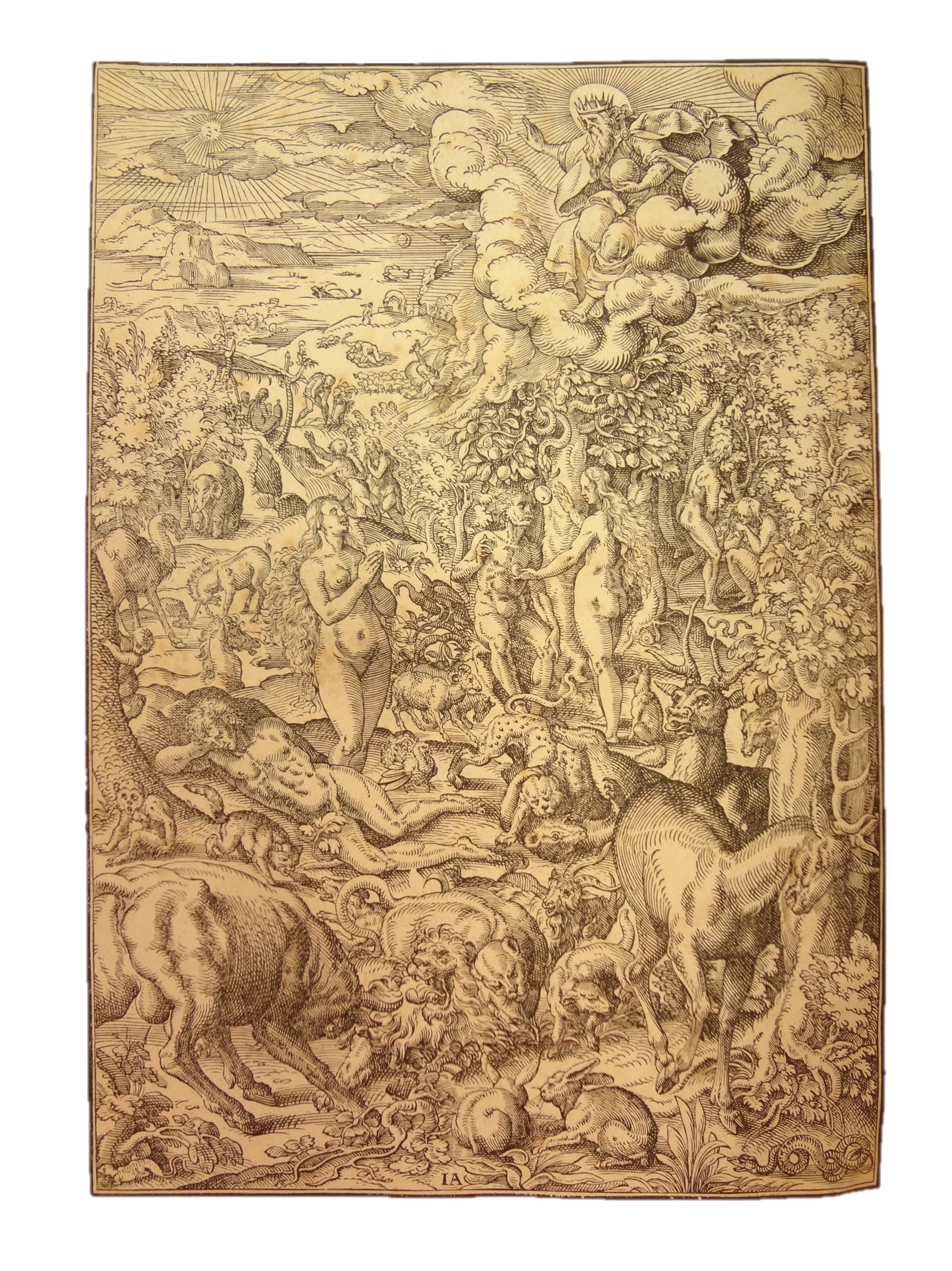 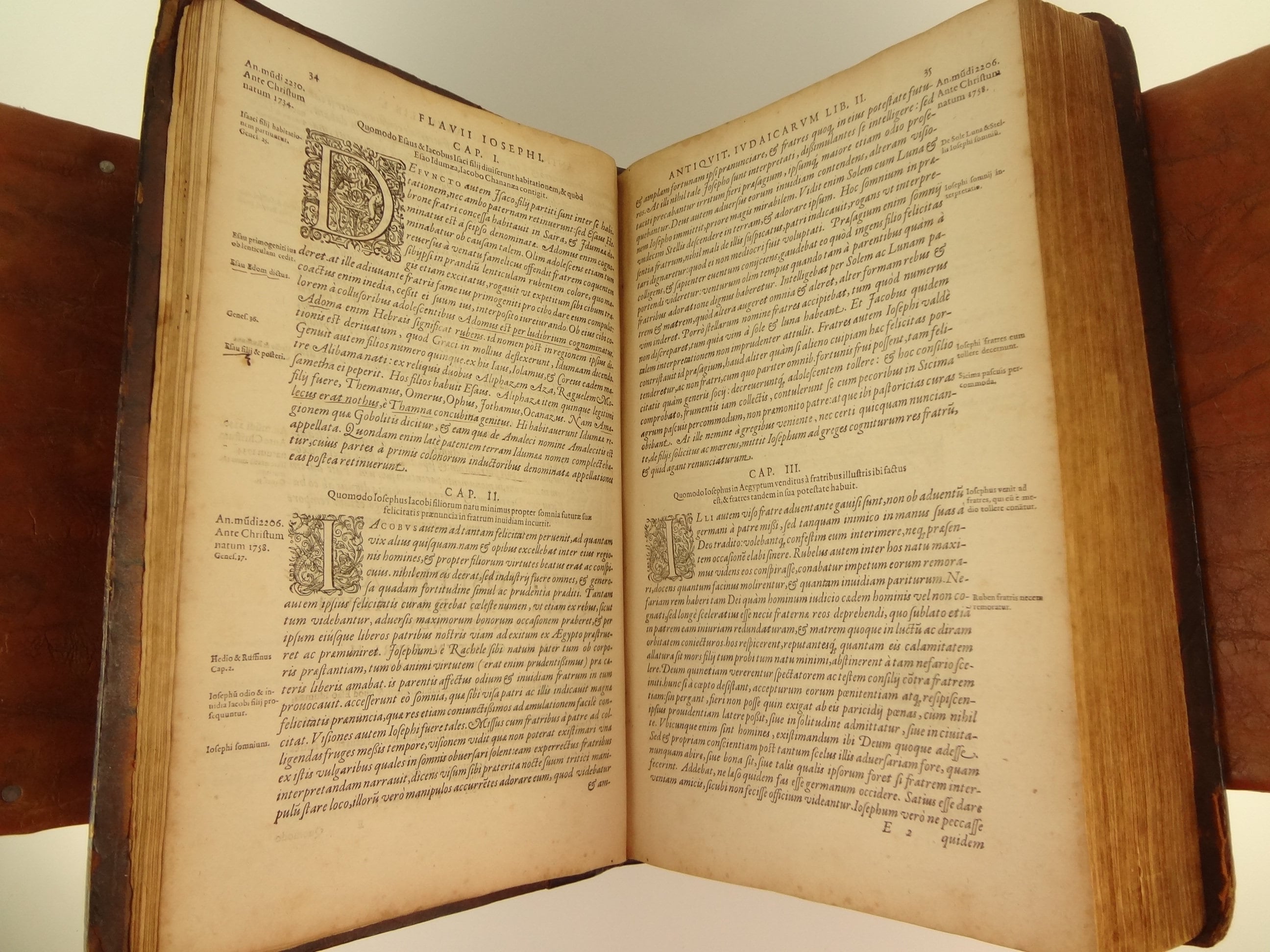 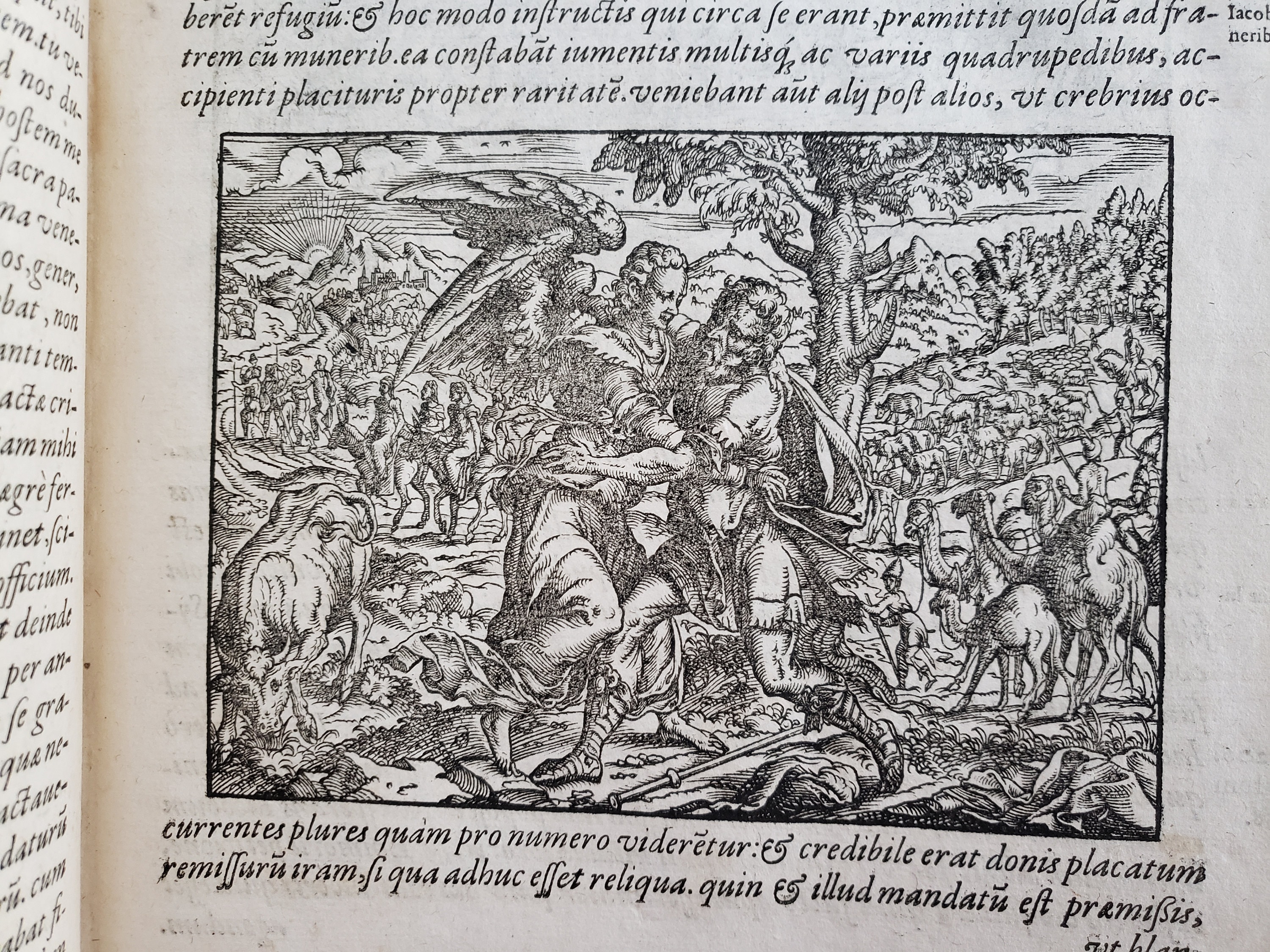 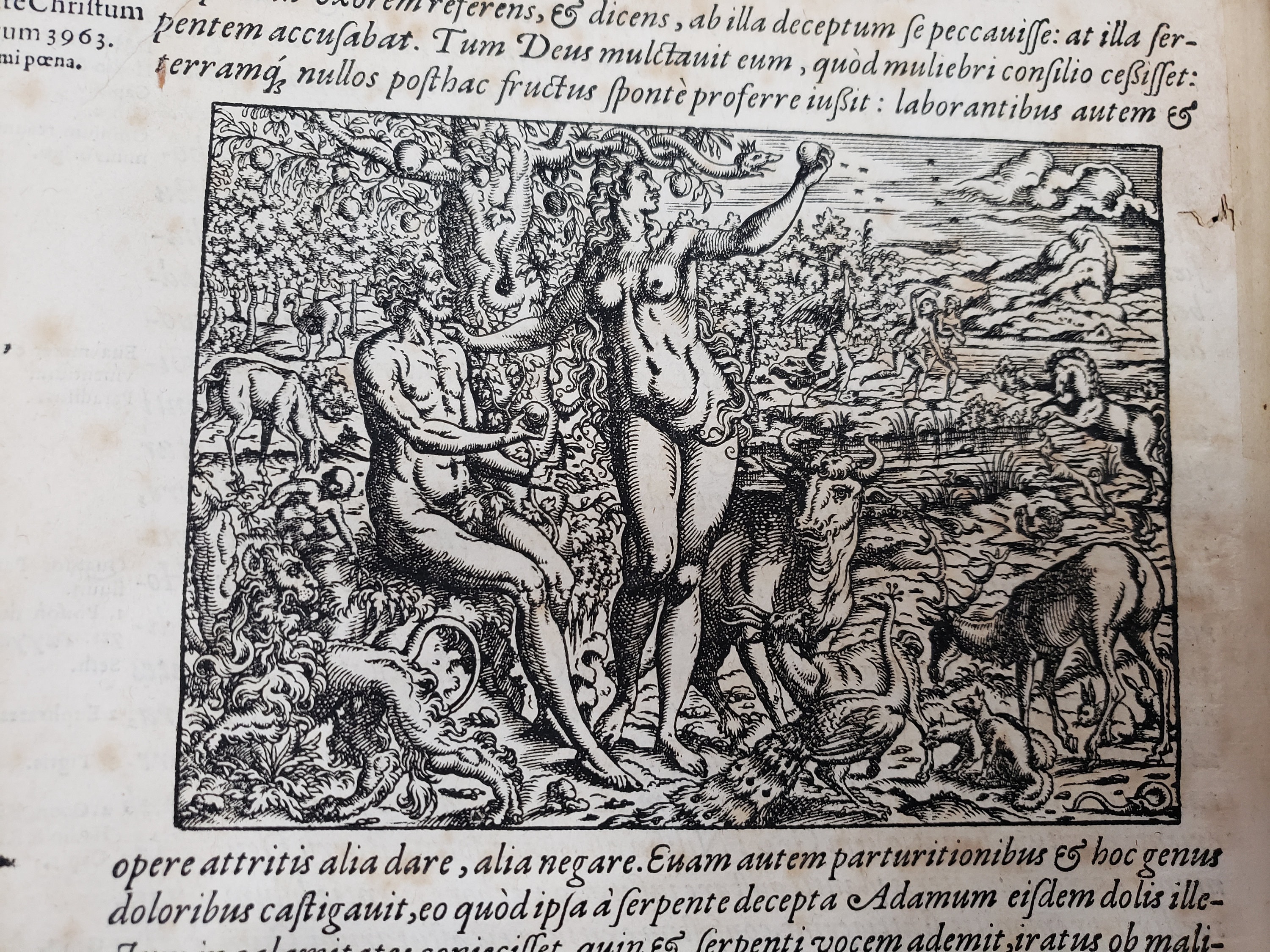 A handsome 1580 folio edition of Josephus' Opera (Works), including a full page Jost Amman woodcut, and many other woodcuts illustrating Israel's history. Josephus is celebrated for mentioning Jesus in his works, as he wrote them shortly after Jesus' ministry. This collection of works includes Josephus' Antiquitatibus Judaicis (Jewish Antiquities), De Bello Judaico (The Jewish War), Contra Apionem (Against Apion), and some other lesser known works.

About the Author & Work -

Titus Flavius Josephus was a first-century Romano-Jewish historian who was born in Jerusalem to a father of priestly descent and a mother who claimed royal ancestry.

He initially fought against the Romans during the First Jewish–Roman War as head of Jewish forces in Galilee, until surrendering in 67 CE to Roman forces led by Vespasian. Josephus claimed the Jewish Messianic prophecies that initiated the First Roman-Jewish War made reference to Vespasian becoming Emperor of Rome. In response Vespasian decided to keep Josephus as a slave and presumably interpreter. After Vespasian became Emperor in 69 CE, he granted Josephus his freedom, at which time Josephus assumed the emperor's family name of Flavius.

Flavius Josephus fully defected to the Roman side and was granted Roman citizenship. He became an advisor and friend of Vespasian's son Titus, serving as his translator when Titus led the Siege of Jerusalem. Since the siege proved ineffective at stopping the Jewish revolt, the city's destruction and the looting and destruction of Herod's Temple (Second Temple) soon followed.

Josephus recorded Jewish history, with special emphasis on the first century CE and the First Jewish–Roman War (66–70 CE), including the Siege of Masada. His most important works were The Jewish War (c. 75) and Antiquities of the Jews (c. 94). The Jewish War recounts the Jewish revolt against Roman occupation. Antiquities of the Jews recounts the history of the world from a Jewish perspective for an ostensibly Greek and Roman audience. These works provide valuable insight into first century Judaism and the background of Early Christianity, and are the chief source next to the Bible for the history and antiquity of ancient Israel.

Jost Amman was a master 16th century engraver. He was known to have executed many of the woodcuts in the printer Sigismund Feierabend's Bible, many of which were re-used for this work by the same printer. The full page woodcut at the front of the book has his initials at the bottom edge. A note on the pastedown says there are ninety-seven woodcuts spread throughout the book.

The title page inscription "Isa: Ailway", likely refers to "Mr. Isaac Ailway (of Hereford), late Rector, having erected a decent house for his successors, left several utensils of household service, as also the works of St. Ambrose, St. Hieron, Eusebius, and other ecclesiastical writers, for the use of his said successors forever" (John Duncumb).

See pictures.This book has been used and worn, but is still in an entirely working condition. Binding is worn, with edge and corner wear, rubbing, etc.. Respined. Ex-libris & bookseller marks inside, and a bookplate on pastedown (N Burt Paradise, 1921). Crash from respine visible on both pastedowns. Some chipping and darkening at edge of first four leaves. Cracking at gutter of 1st blank endpaper. 4" tear near gutter of 1st three leaves. Repair at bottom of title page. Occasional edge chip, dog ear, marginal edge tear, etc. throughout. Lightly foxed throughout. Marginal annotations throughout. A couple small wormholes. Occasional moisture spot. 3" tear near gutter 21/22. 4" moisture mark 443 to 570 right upper edge. 5" tear fore-edge 467, no text affected. Although bearing the wear of almost 450 years, it remains a good reading copy, well put together with fun illustrations and good typography.