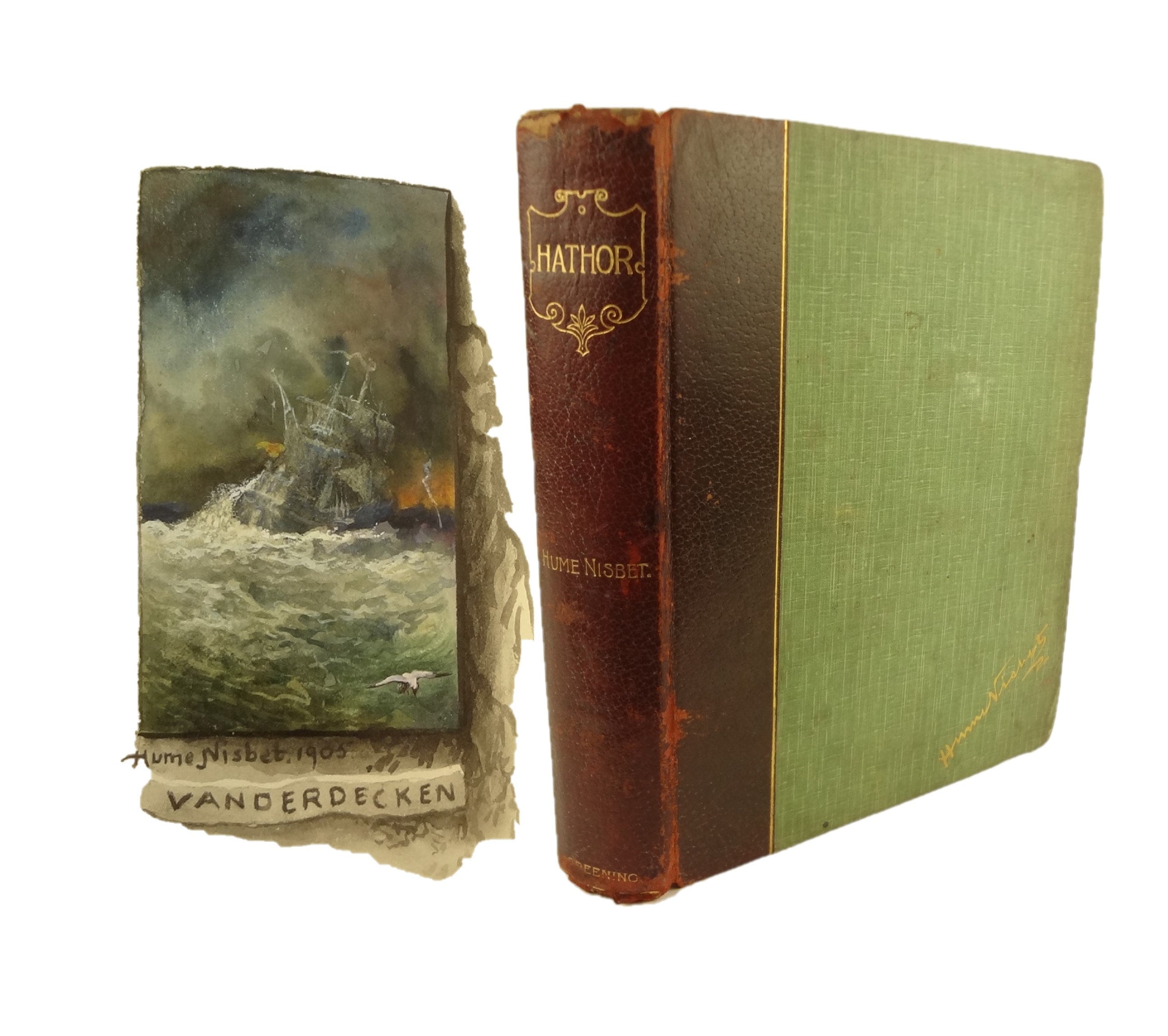 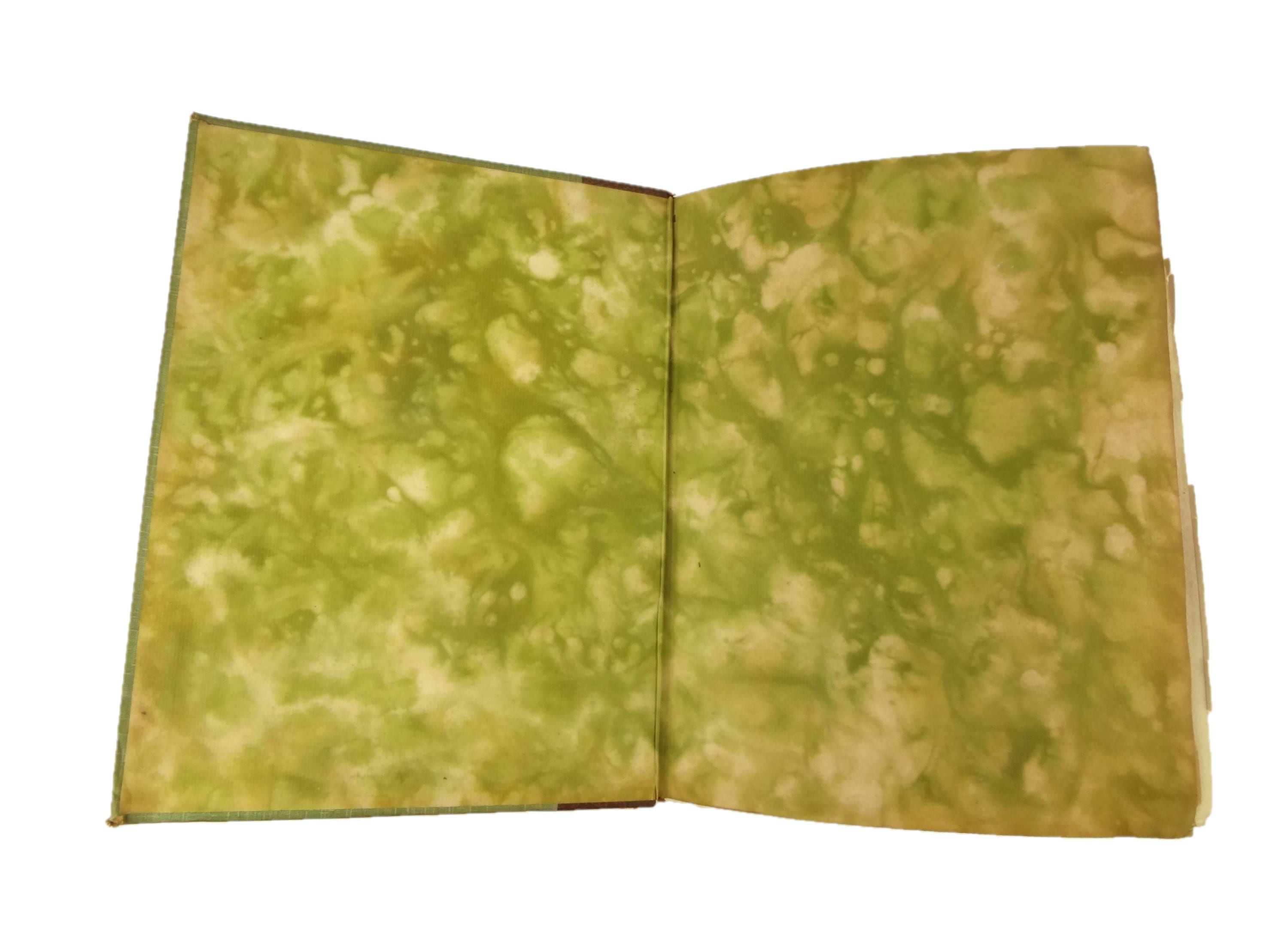 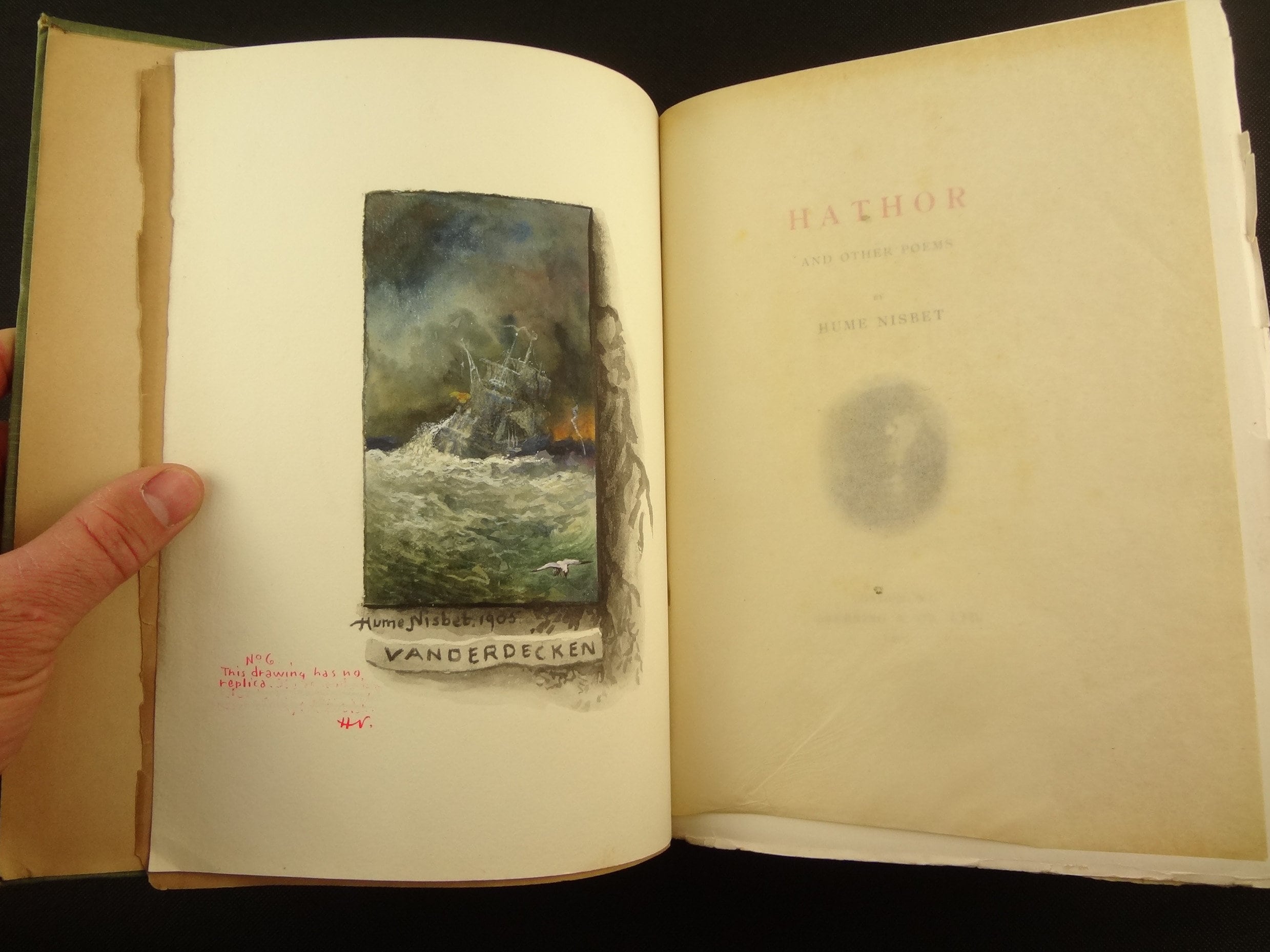 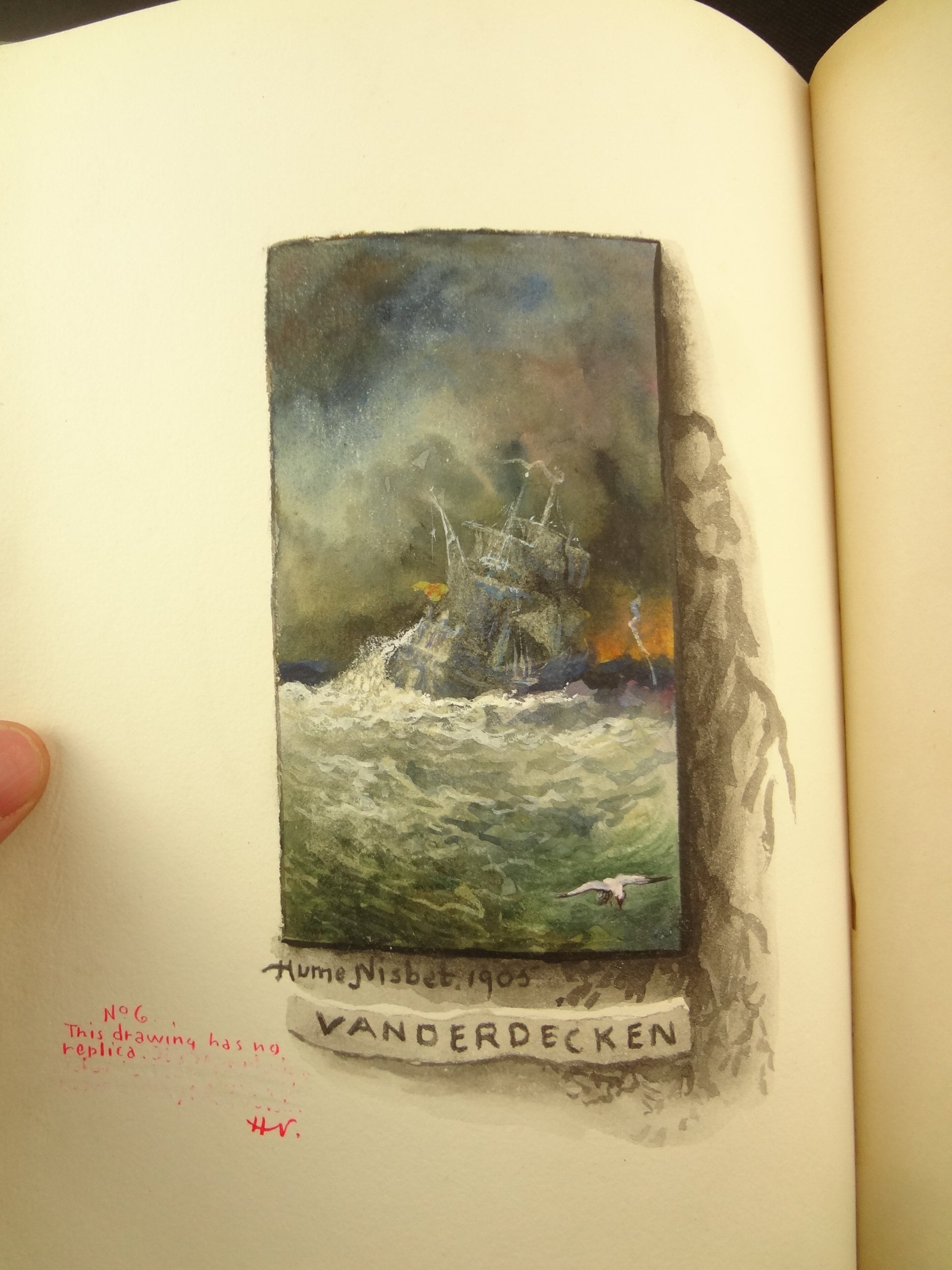 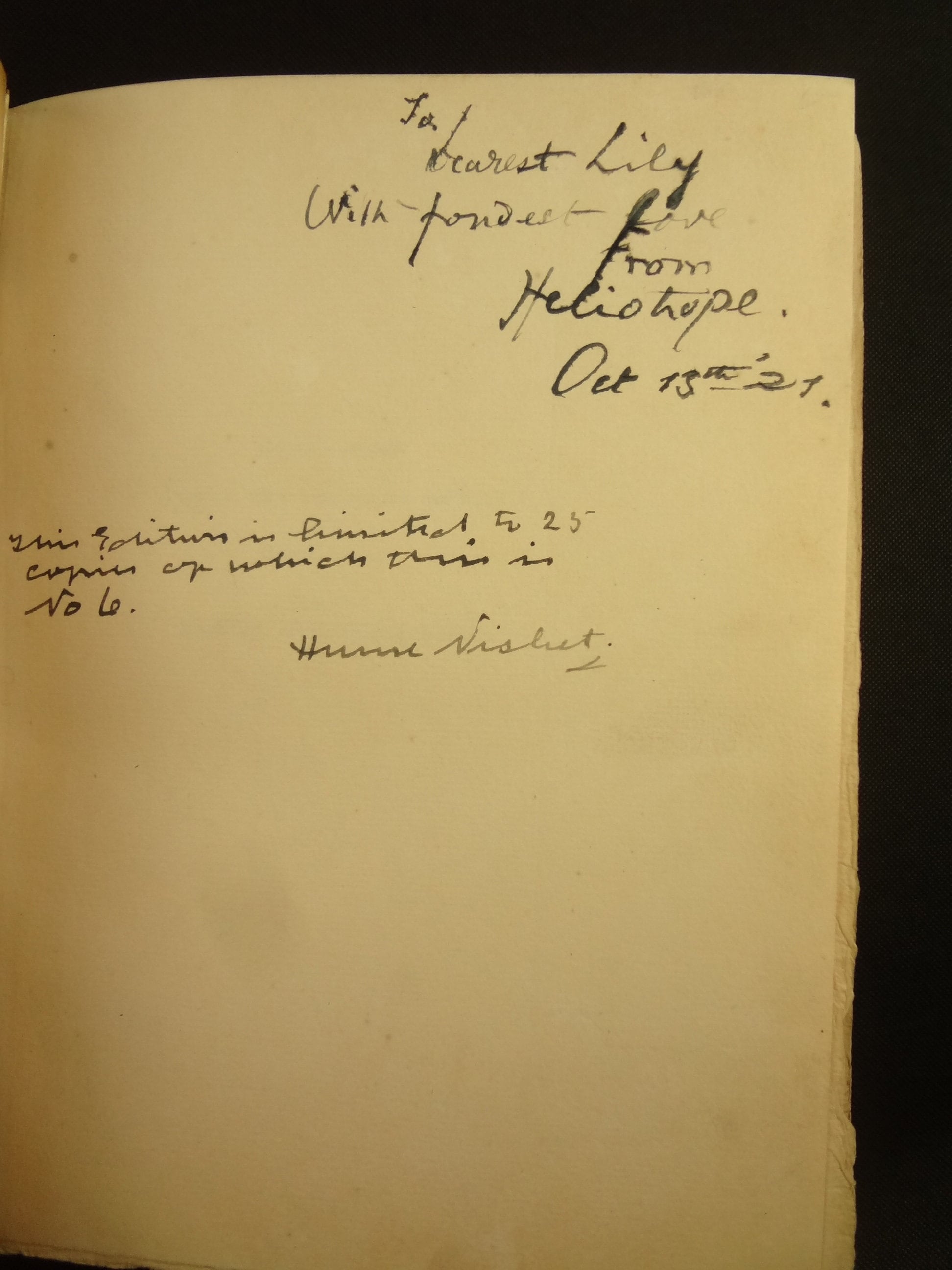 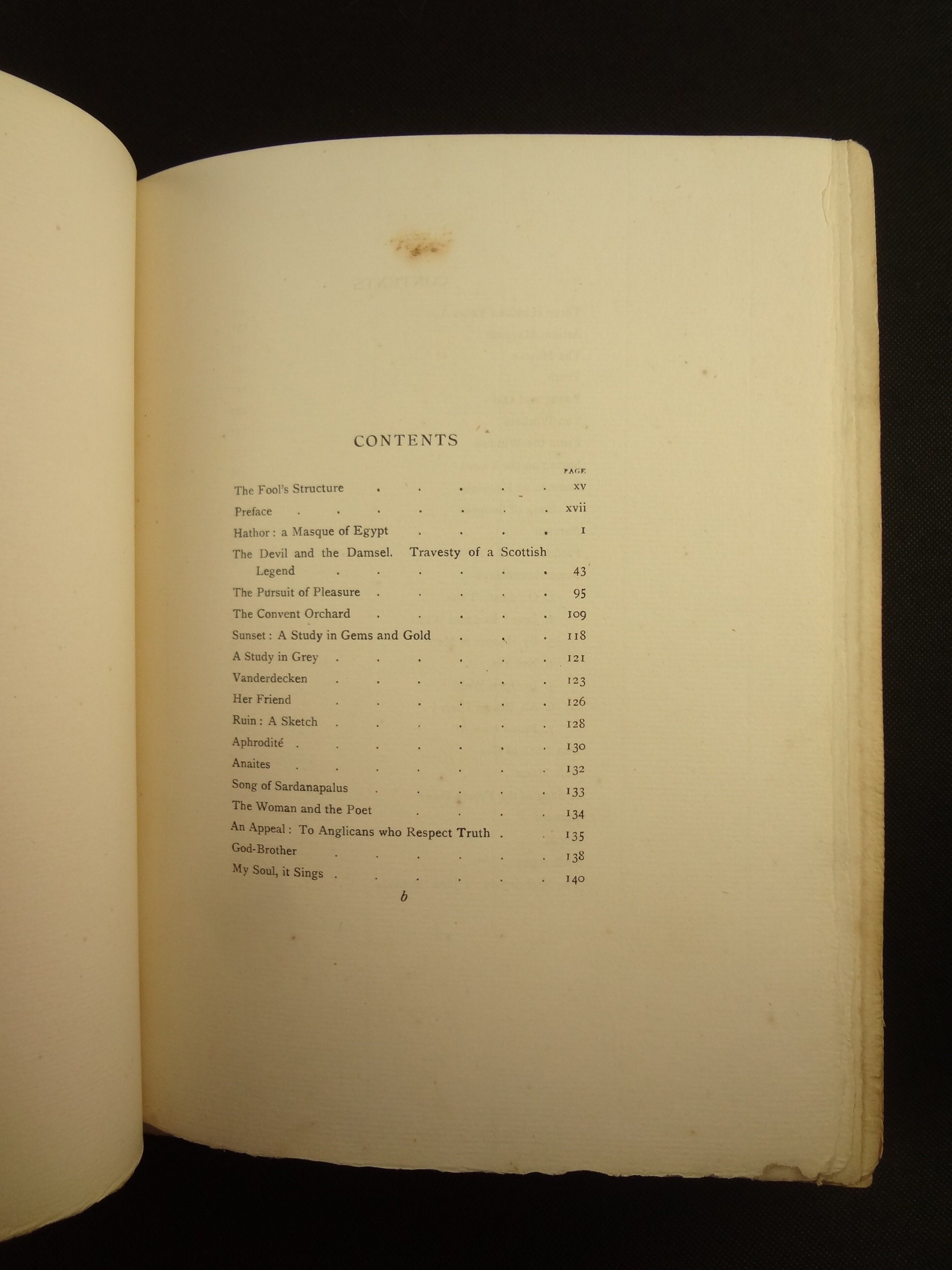 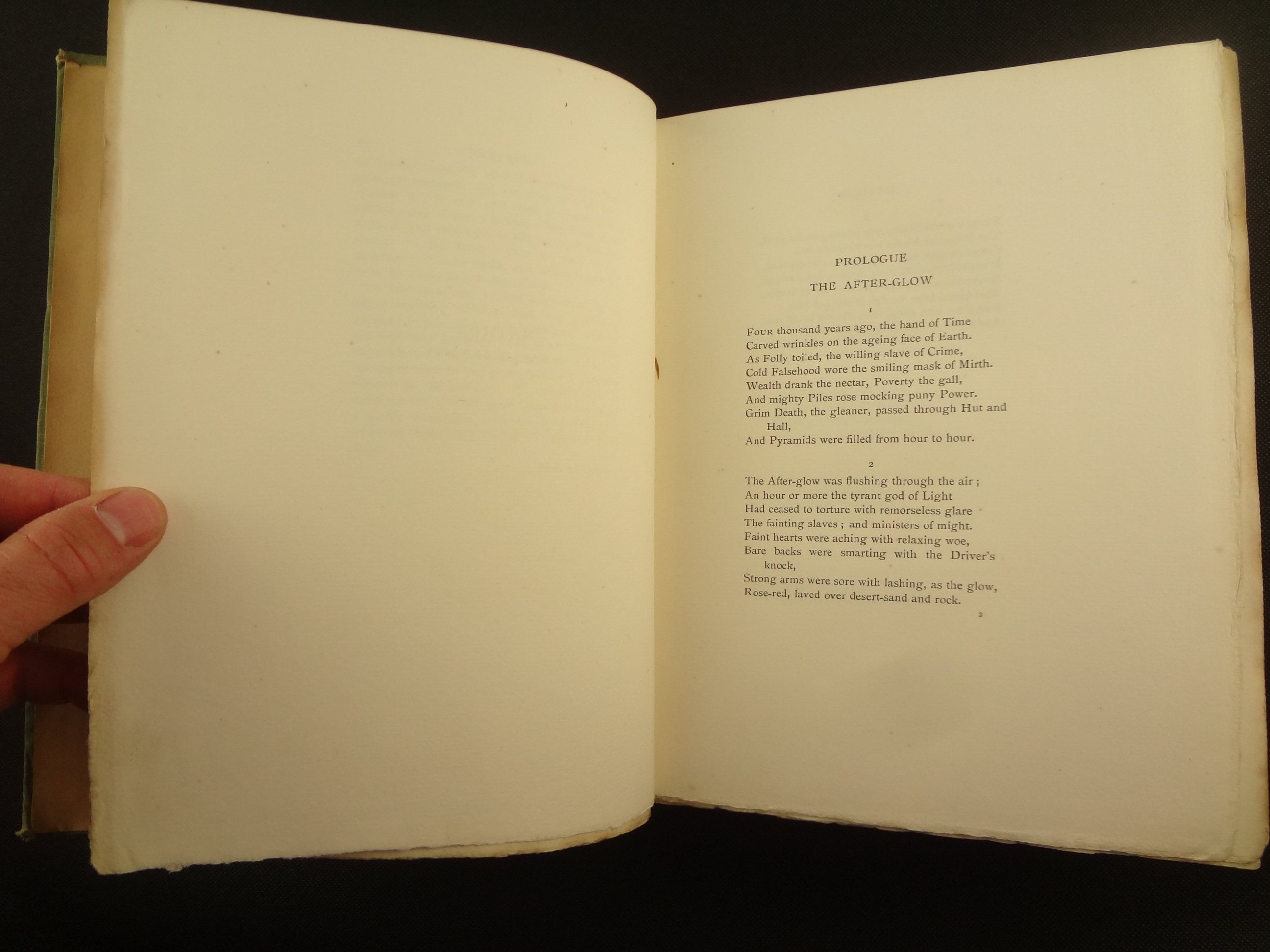 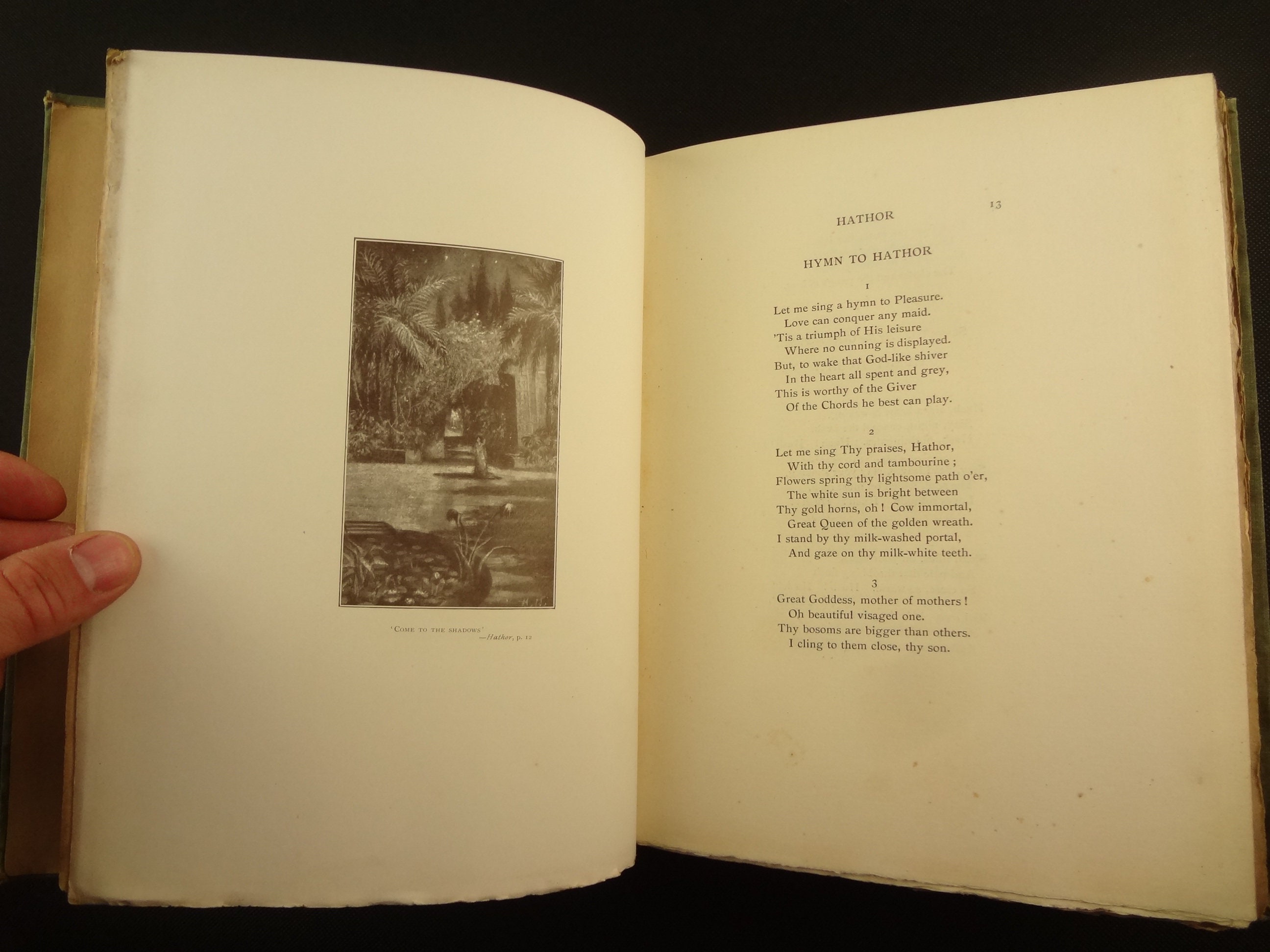 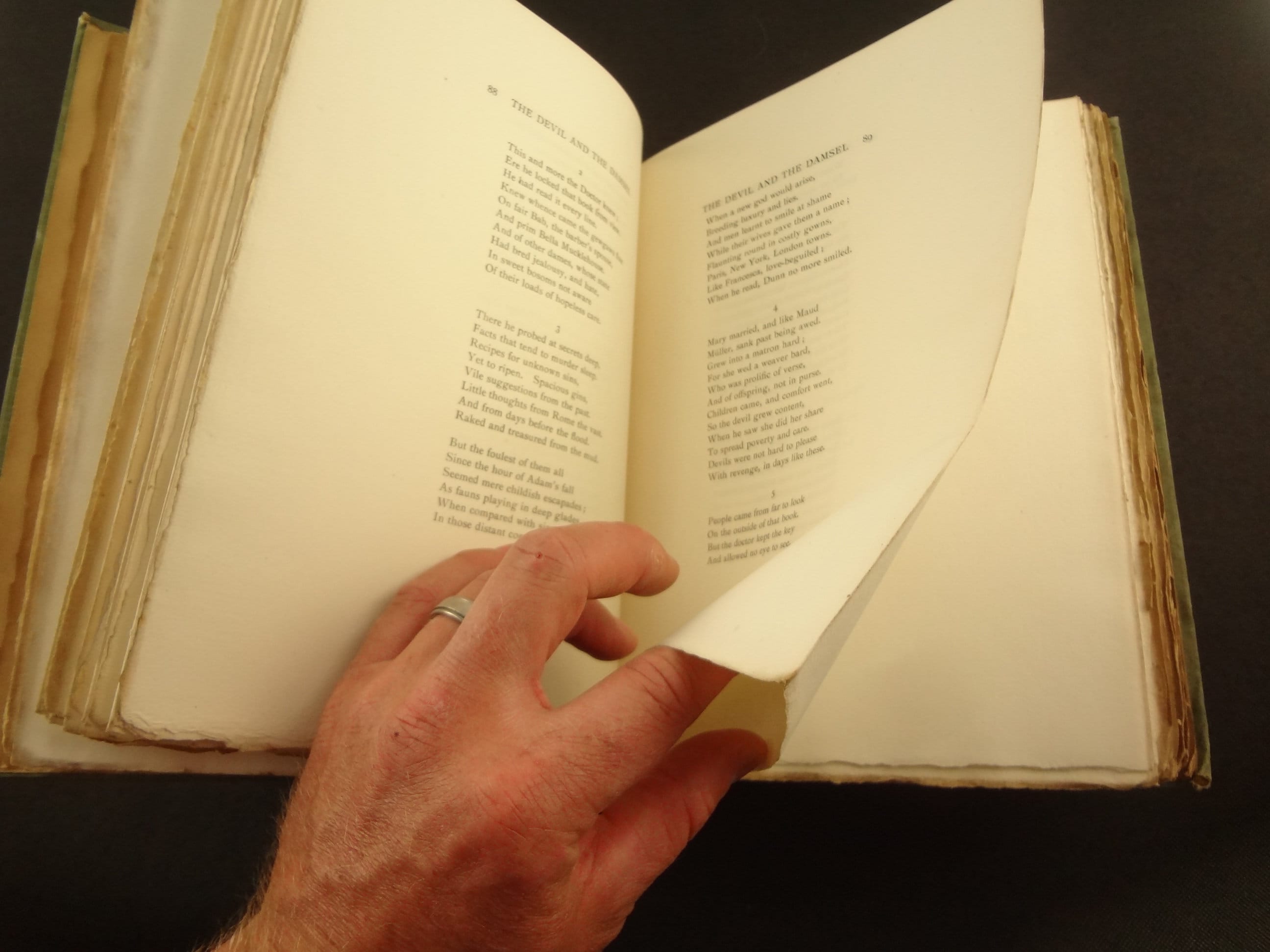 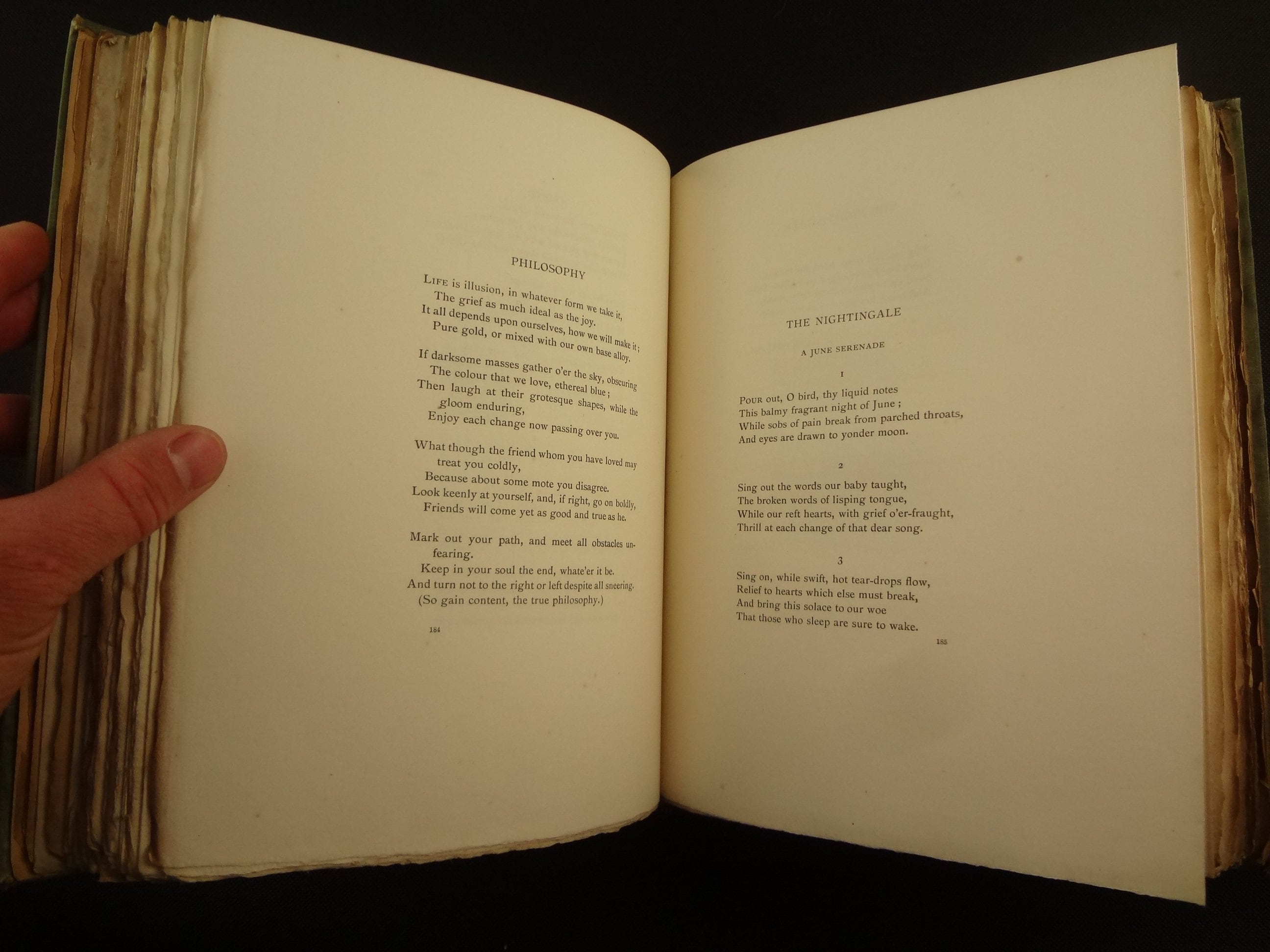 1905 Hathor And Other Poems, Hume Nisbet. Large paper edition. Limited edition, #6 of 25. With an original painting by the author.

The advertisement for this work is included at the rear of this book, and it states that 25 copies were produced on "large paper" with an original watercolor by the artist. The inscription next to the painting in this copy identifies it as #6. I've found very little information about the other 25 to verify that they were all produced. The inscription at the bottom of the painting, "Vanderdecken", names the legendary captain of The Flying Dutchman, and identifies the ship, in the watercolor, battered by stormy weather.

Nisbet was born in Stirling, Scotland. At 16 years of age he went to Australia, during which he traveled to Tasmania, New Zealand, and the South Sea Islands, painting, sketching, writing poetry and stories, and making notes for future work. He spent one year of the period acquiring theatrical experience at the Theatre Royal, Melbourne, under the actor Richard Stewart.

Nisbet returned to London in 1872, and spent some time in studying and copying pictures in the National Gallery and in South Kensington. At the end of the next year he went back to Scotland and devoted himself to art, with an occasional lapse into literature. For eight years he was art master of the Watt Institution and School of Art, Edinburgh.

Among his best-known paintings are "Eve's first Moonrise," "The Flying Dutchman," "The Dream of Sardanapalus," four pictures of "The Ancient Mariner," and "The Battle of Dunbar."

Nisbet devoted most of his time to writing. He produced many volumes of verse, books on art and fiction. Several of his novels are coloured by his Australian experiences and appear to have had some success. Miller, in his Australian Literature, lists about 40 novels published between 1888 and 1905. During the next 10 years he published a few more books, including Hathor and Other Poems, which appeared as the first volume of his poetic and dramatic works in 1905.

Many of Nisbet's volumes were of ghost stories. These include Paths of the Dead (1899), Stories Weird and Wonderful (1900), and The Haunted Station (1894), whose title story (about a haunted property or "station" in the Australian Outback) has often been reprinted.

Measures approx. 25 x 20 x 4 cm. Cloth hardcover boards with a leather spine. "Hume Nisbet" on front board in gilt. Title and author on spine in gilt. Top edge cut and gilded. Other two edges uncut and somewhat unopened). Some edges deckled, some rough cut. Original painting as the frontis. A little difficult to paginate, due to unopened quires, but it looks like 332 numbered pages, with an advertisement at the rear.

See pictures. Vintage patina with edge and corner wear some rubbing, soiling and marks along the cloth boards. Some loss along joints. Joints possible starting. Chipping at top and bottom of spine, and rubbing. Spine lightly sunned.

Lightly foxed throughout. Some thumbing and toning. The book came from the publisher unopened, and those quires that have been cut open have rough edges. The edges of the title page have suffered the worst, as it's not the same style of paper as the rest. The blank unpaginated page after the title page has an owner's inscription (1925) and the authors inscription and signature. I can't tell if some of the small spots are a fox mark, or a tiny spot of mold. There is no smell of mold, and the book is very dry, without moisture marks. So I think they're just dark fox spots. On the frontis/painting page, half the inscription has been rubbed away.