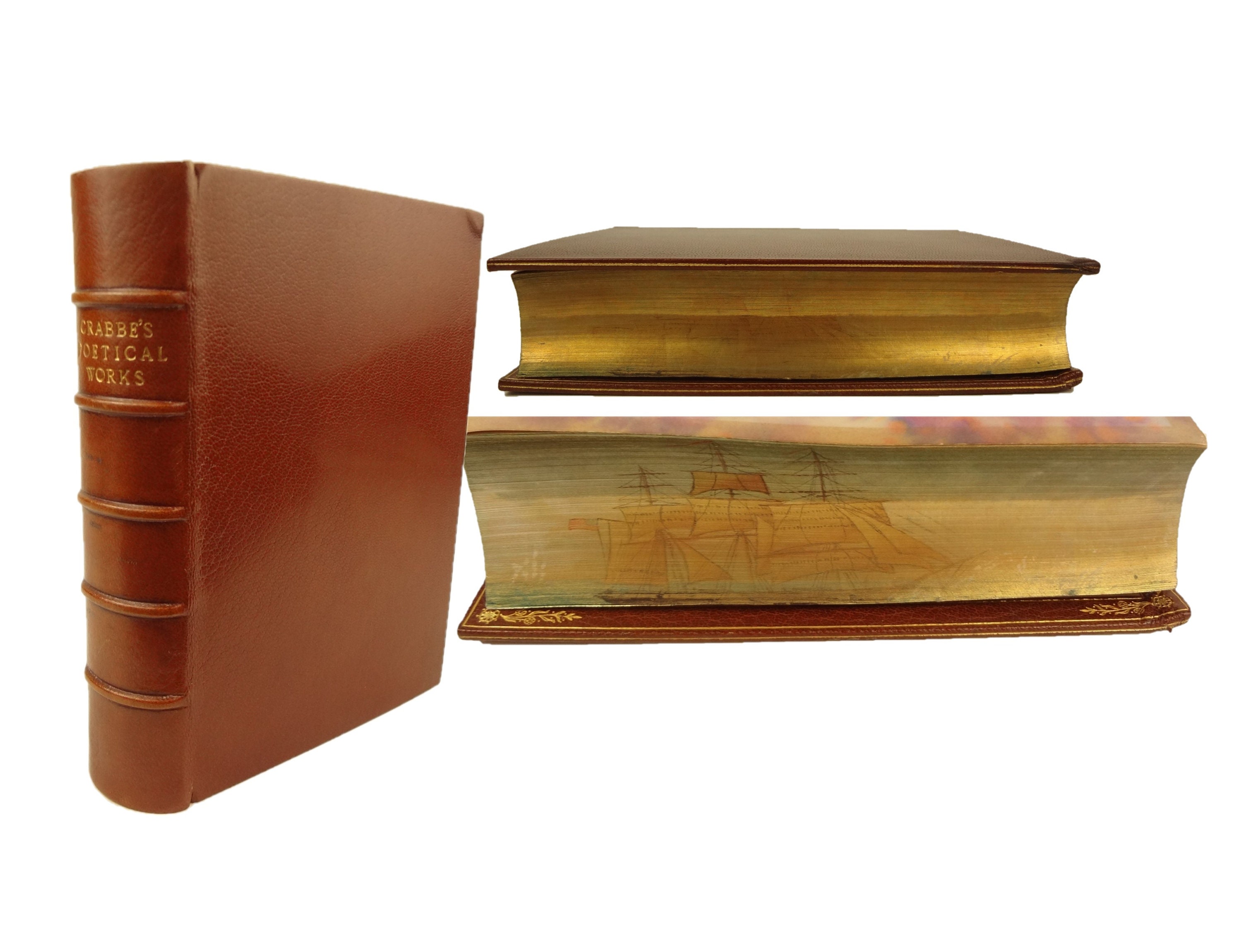 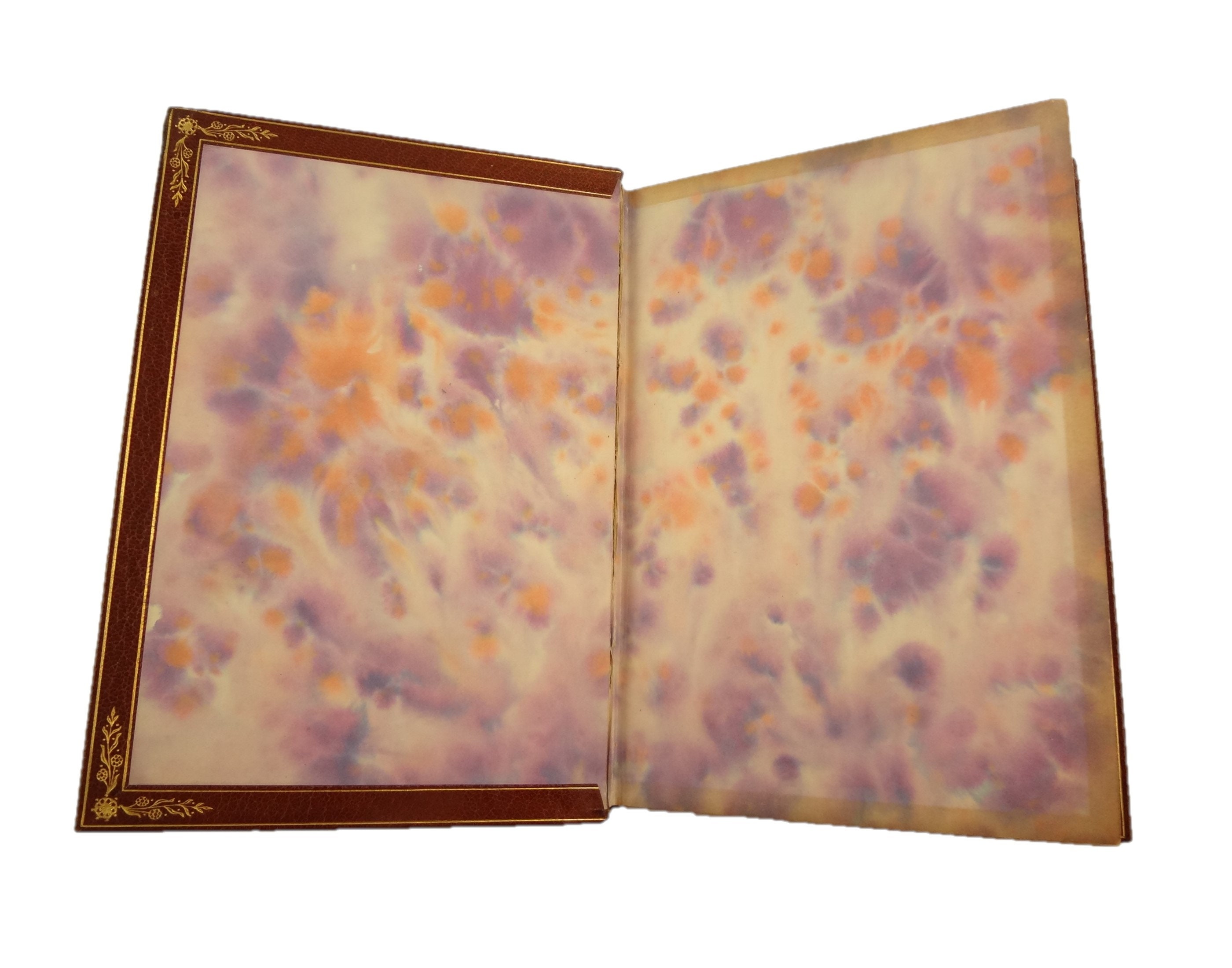 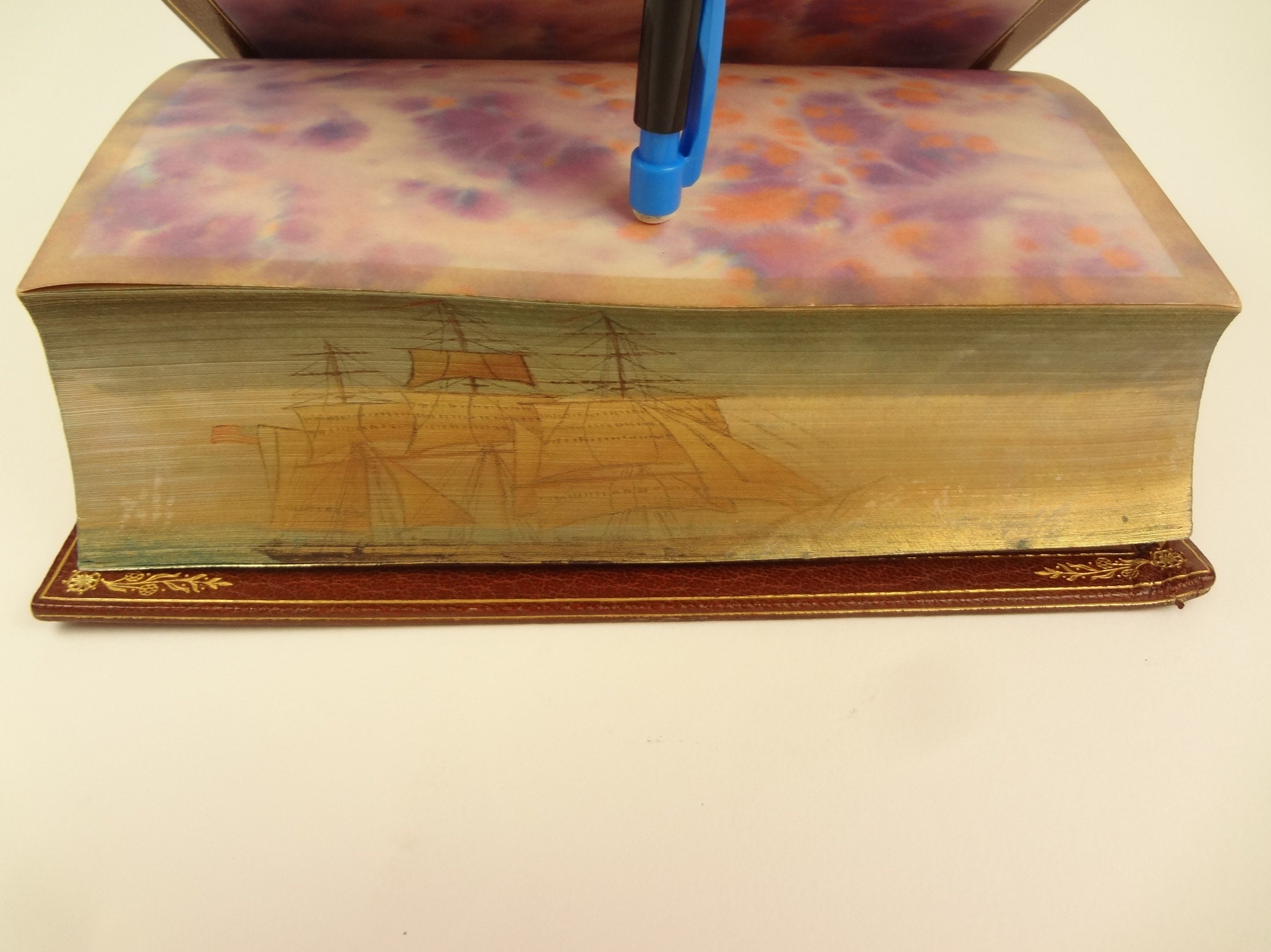 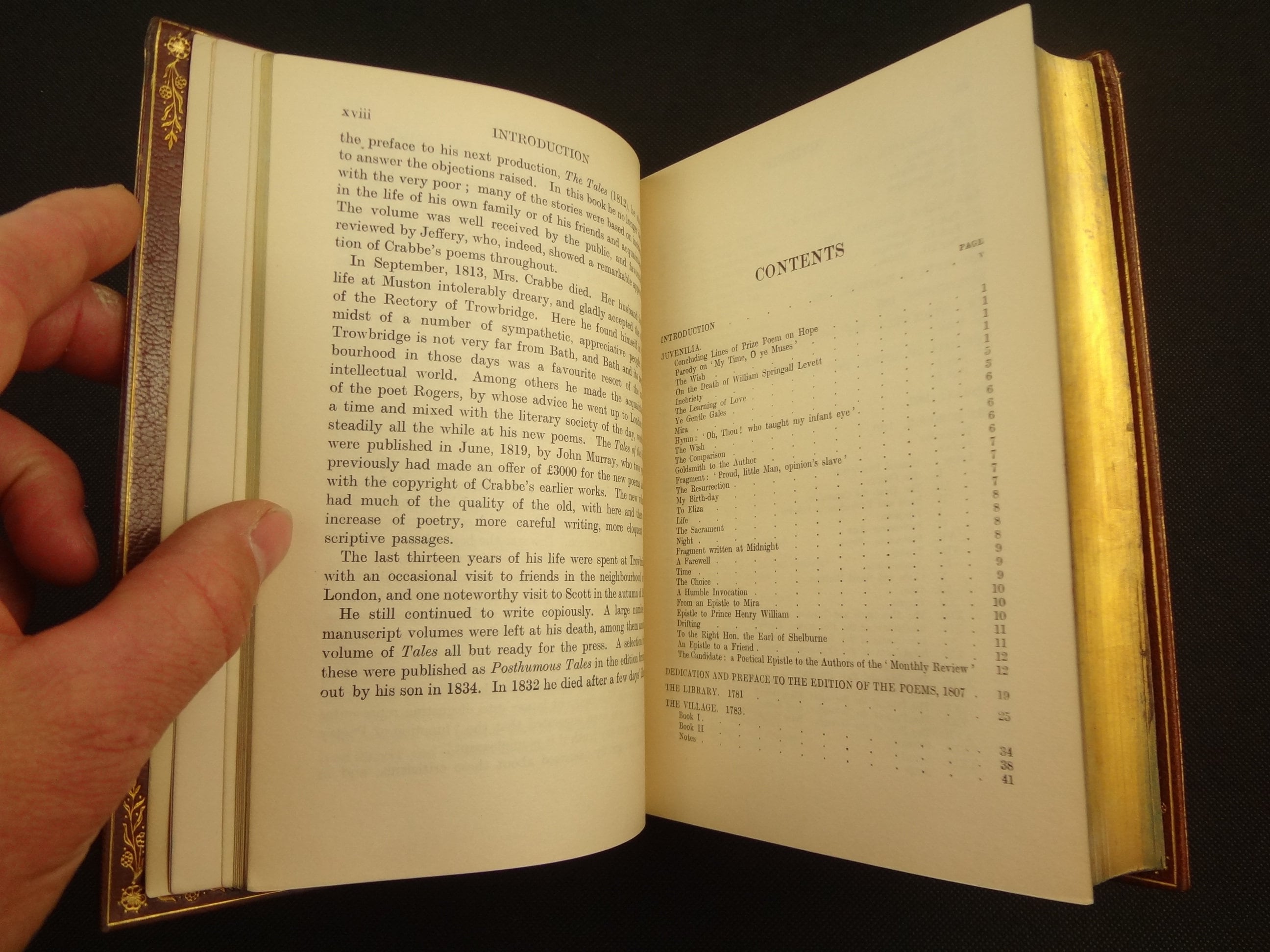 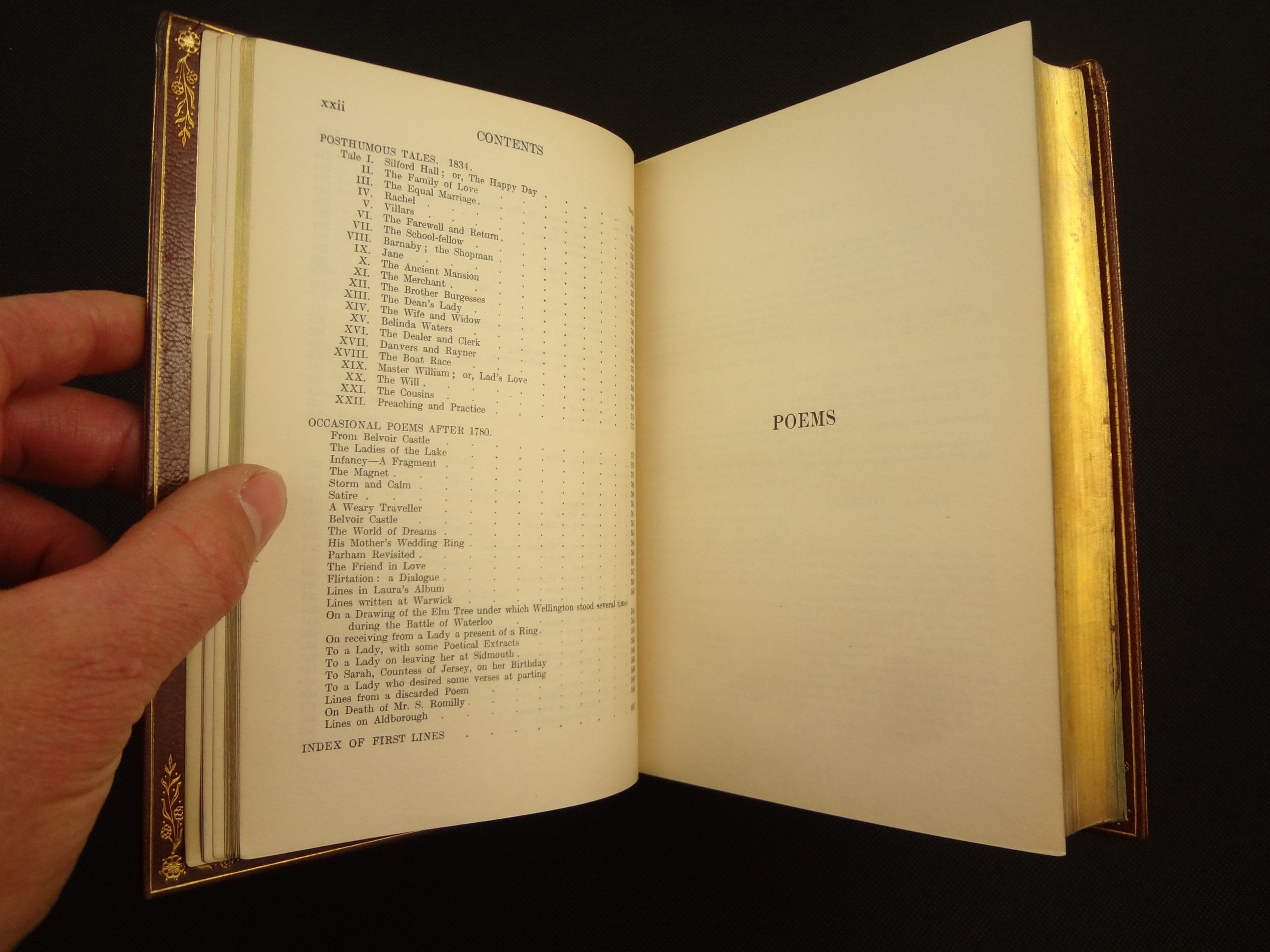 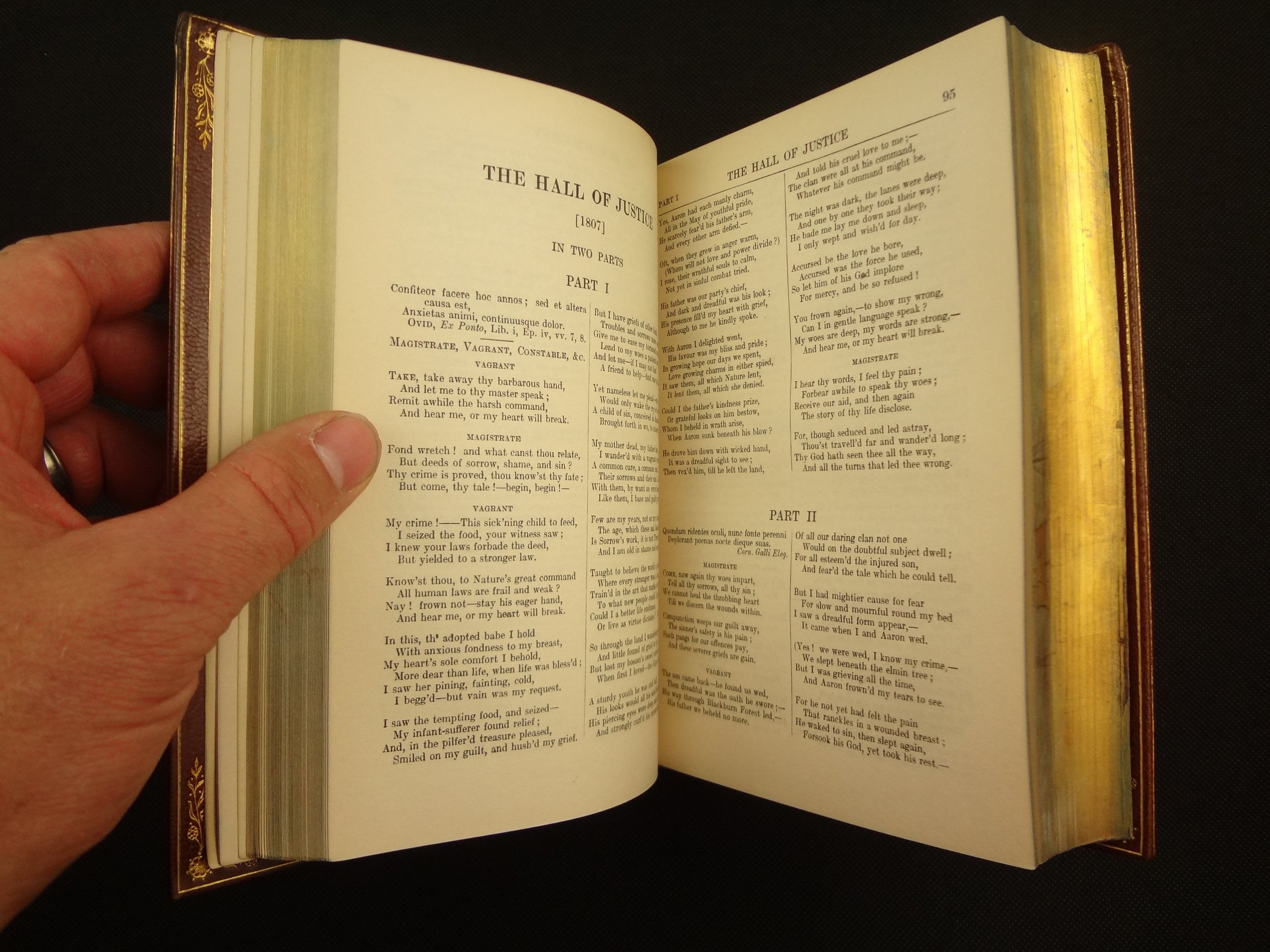 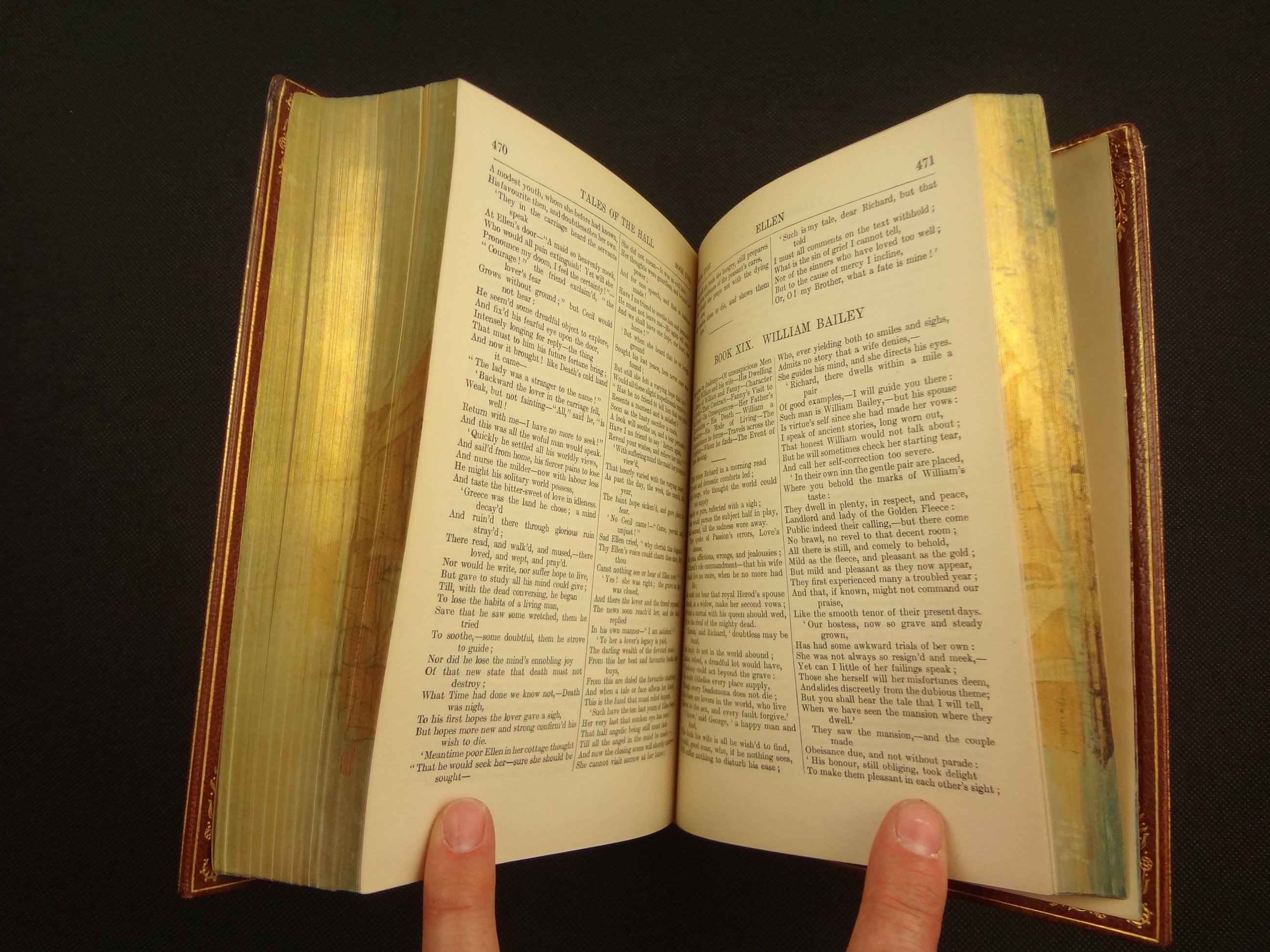 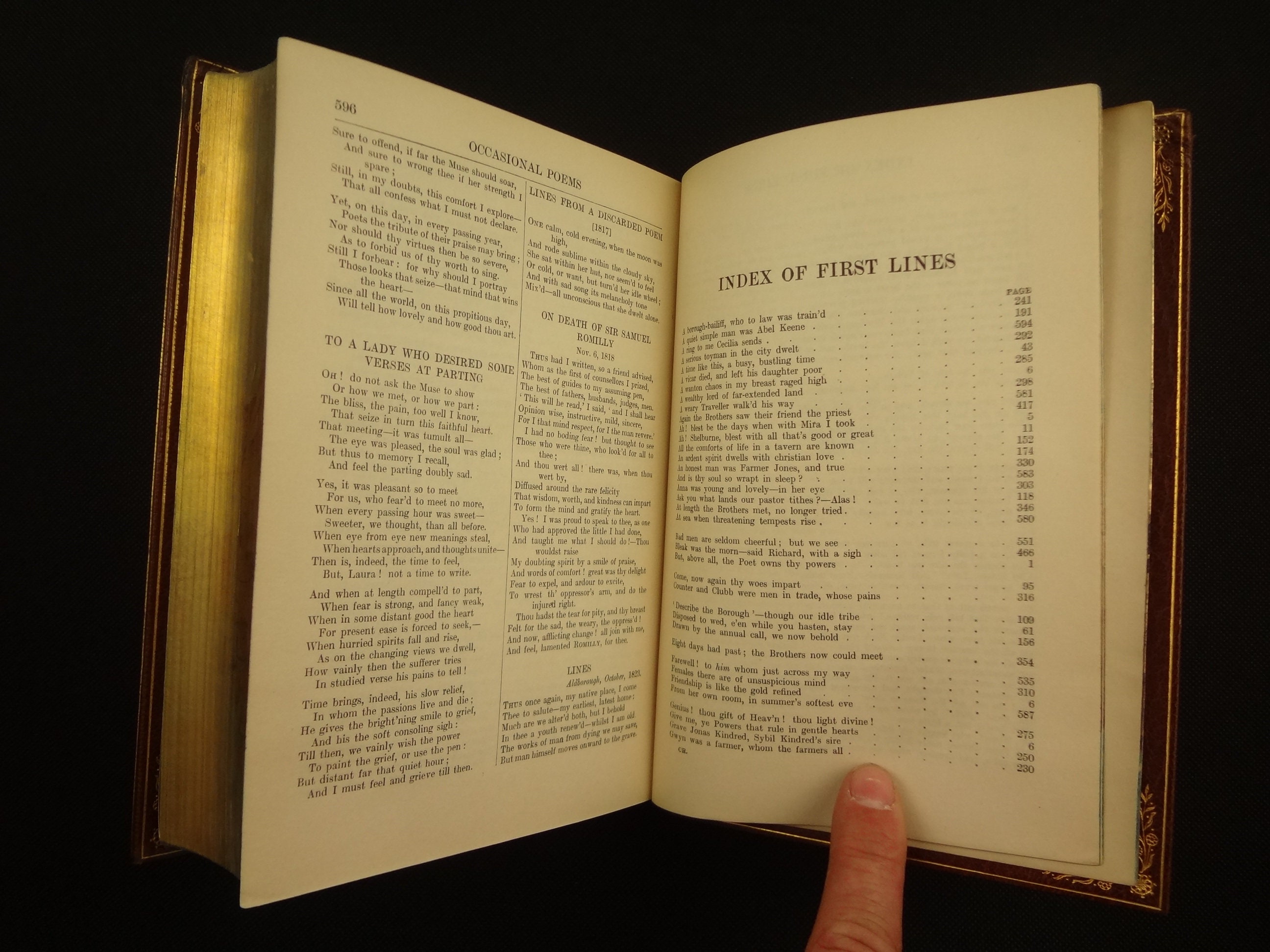 A handsome printing of George Crabbe's venerable works, in a modest but attractive fine-binding with a fore-edge painting of the USS Nightingale hiding under the gilt fore-edge.

If you haven't heard of the Nightingale, its history is one the most exciting of any ship. I'll abridge, but do it injustice. Completed in Maine in 1851, it was named after Jenny Lind, the Swedish Nightingale, who was touring with Barnum (as shown in the movie ;). It first became the fastest ship in the world, racing the United Kingdom's best offering from Shanghai to London; they lost the first time, but the crew trained to do better, and beat the same boat by a week the second race. It ran miners to the gold rush in Australia. It was outfitted for display in the first World's Fair in London in 1855. In 1860 it began running slaves, from Africa to Cuba, during its travels. In 1861 the US Navy boarded it, with Africans on-board, and seized it (shipping slaves had been illegal for many years). They returned the Jenny Lind to Africa, delivering the Africans to Liberia (a colony began in 1822 by Americans who thought African's rescued from slavery would do better in Africa, in a country of their own). Then the courts in America condemned the boat and the U.S. Navy bought it. It went into service for the Union fighting against the South (much more to this story, look it up!). After the war the Western Union Telegraph Expedition purchased the ship and used it for Arctic exploration, exploring a telegraph cable crossing the Bering Strait. From then (1867) until 1893 it remained in merchant service until it floundered in 1893.

I skipped many details in the above. A truly notable ship.

George Crabbe (1754 –1832) was an English poet, surgeon and clergyman. He is best known for his early use of the realistic narrative form and his descriptions of middle and working-class life and people.

In the 1770s, Crabbe began his career as a surgeon. In 1780, he traveled to London to make a living as a poet. After encountering serious financial difficulty he wrote to the statesman and author Edmund Burke for assistance. Burke was impressed enough by Crabbe's poems to promise to help him in any way he could. The two became close friends and Burke helped Crabbe greatly both in his literary career and in building a role within the church.

He developed friendships with many of the great literary men of his day, including Sir Walter Scott, whom he visited in Edinburgh, and William Wordsworth and some of his fellow Lake Poets, who frequently visited Crabbe as his guests.

Lord Byron described him as "nature's sternest painter, yet the best." The modern critic Frank Whitehead wrote that "Crabbe, in his verse tales in particular, is an important—indeed, a major—poet whose work has been and still is seriously undervalued."