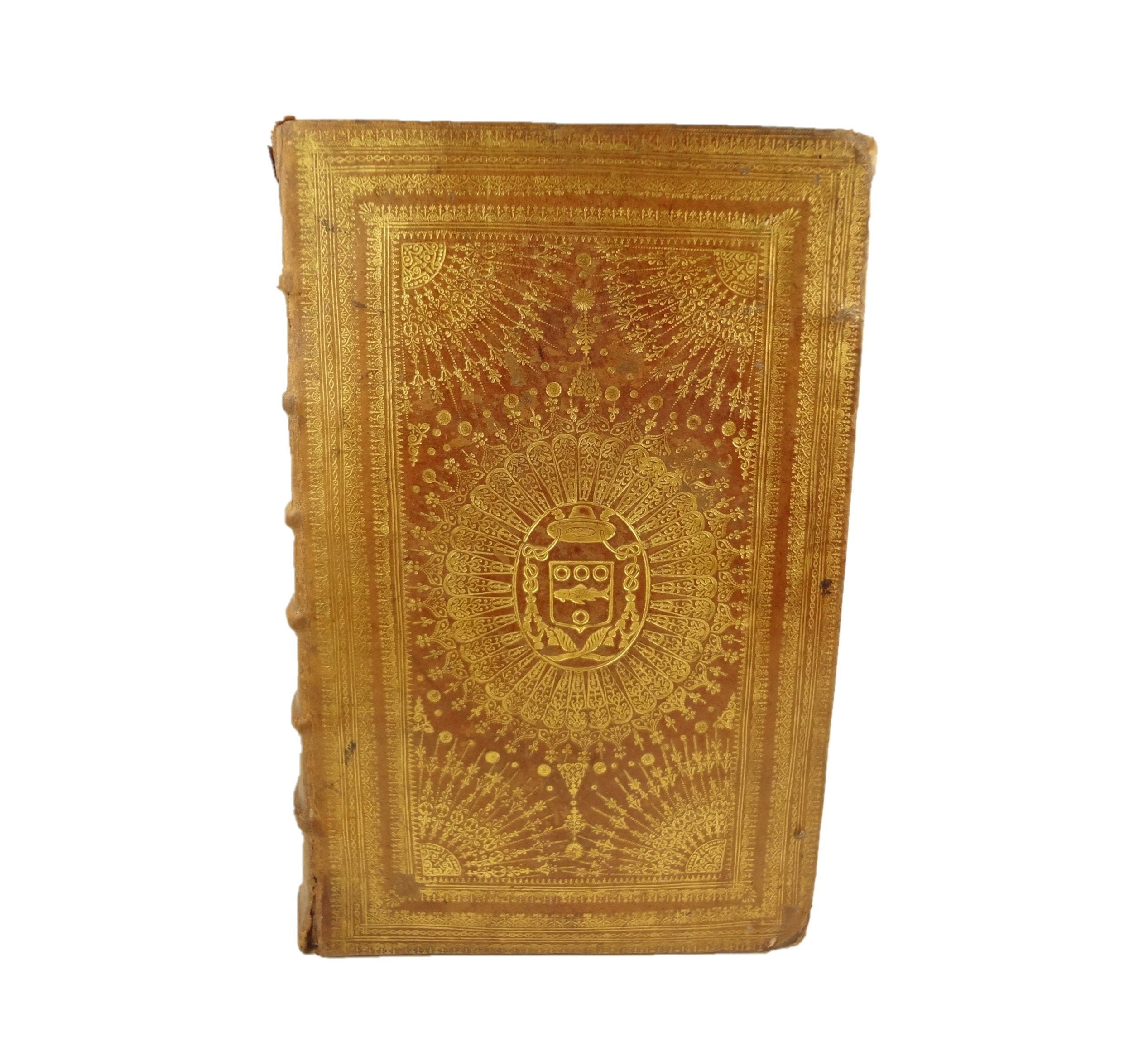 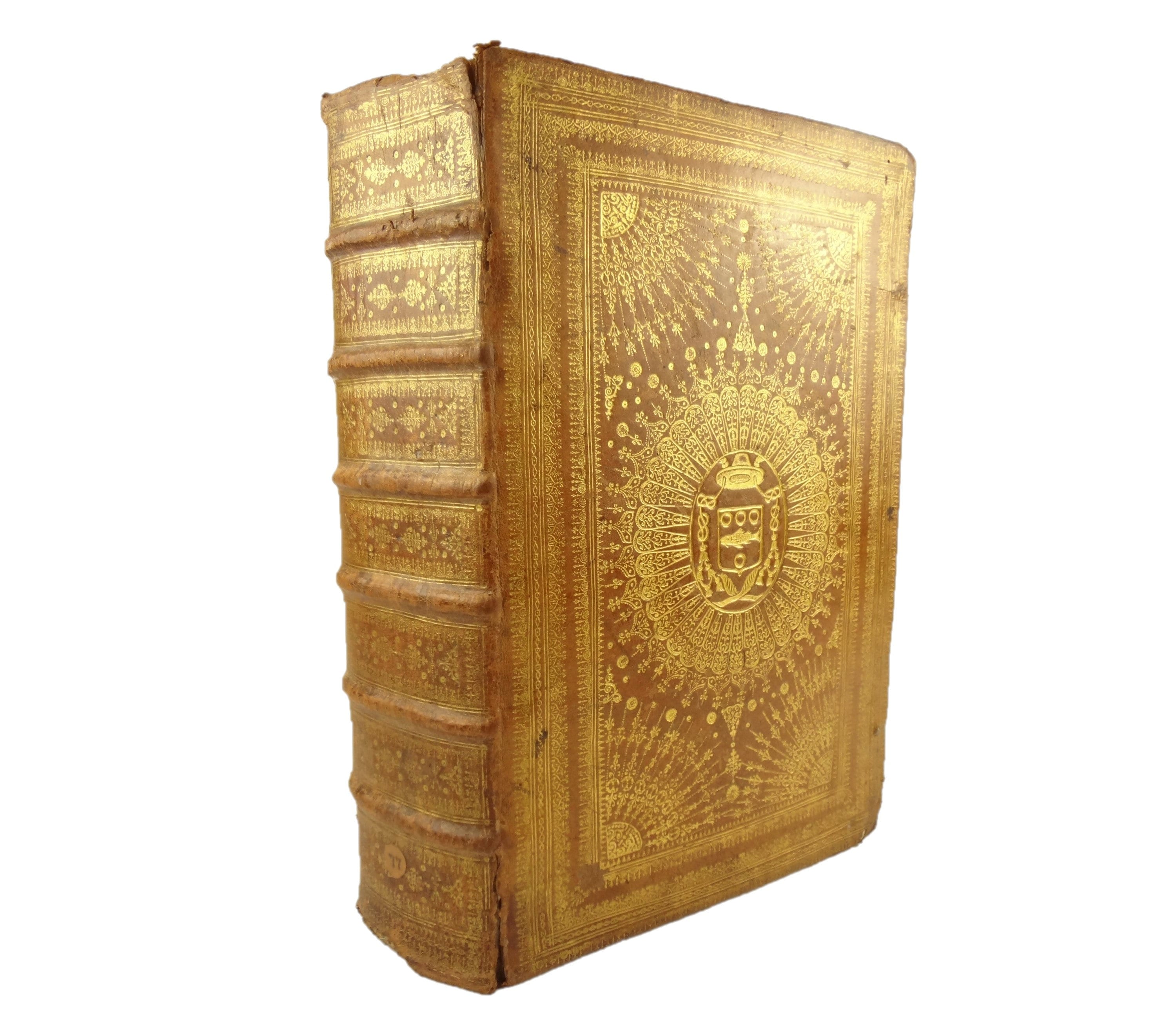 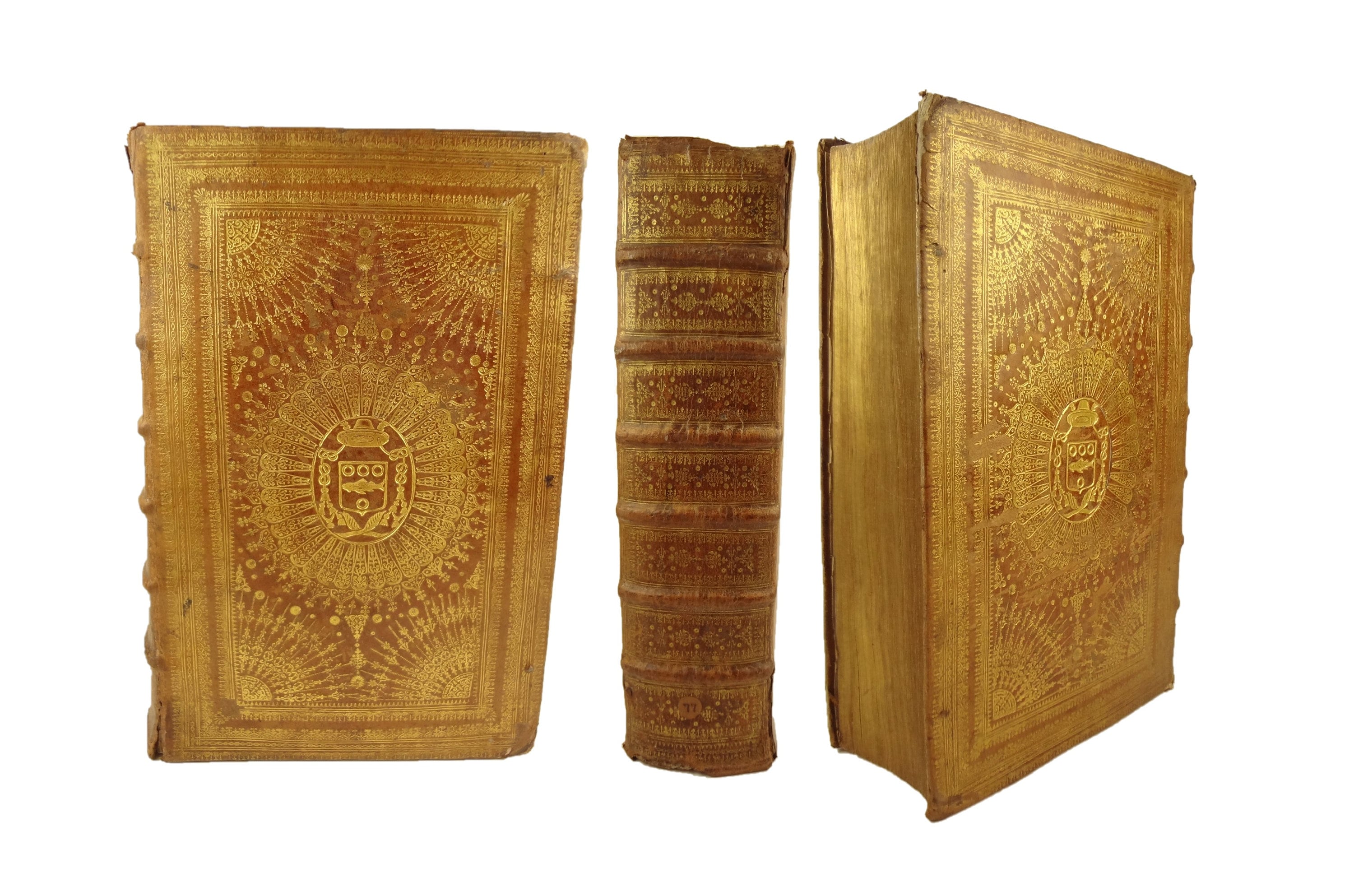 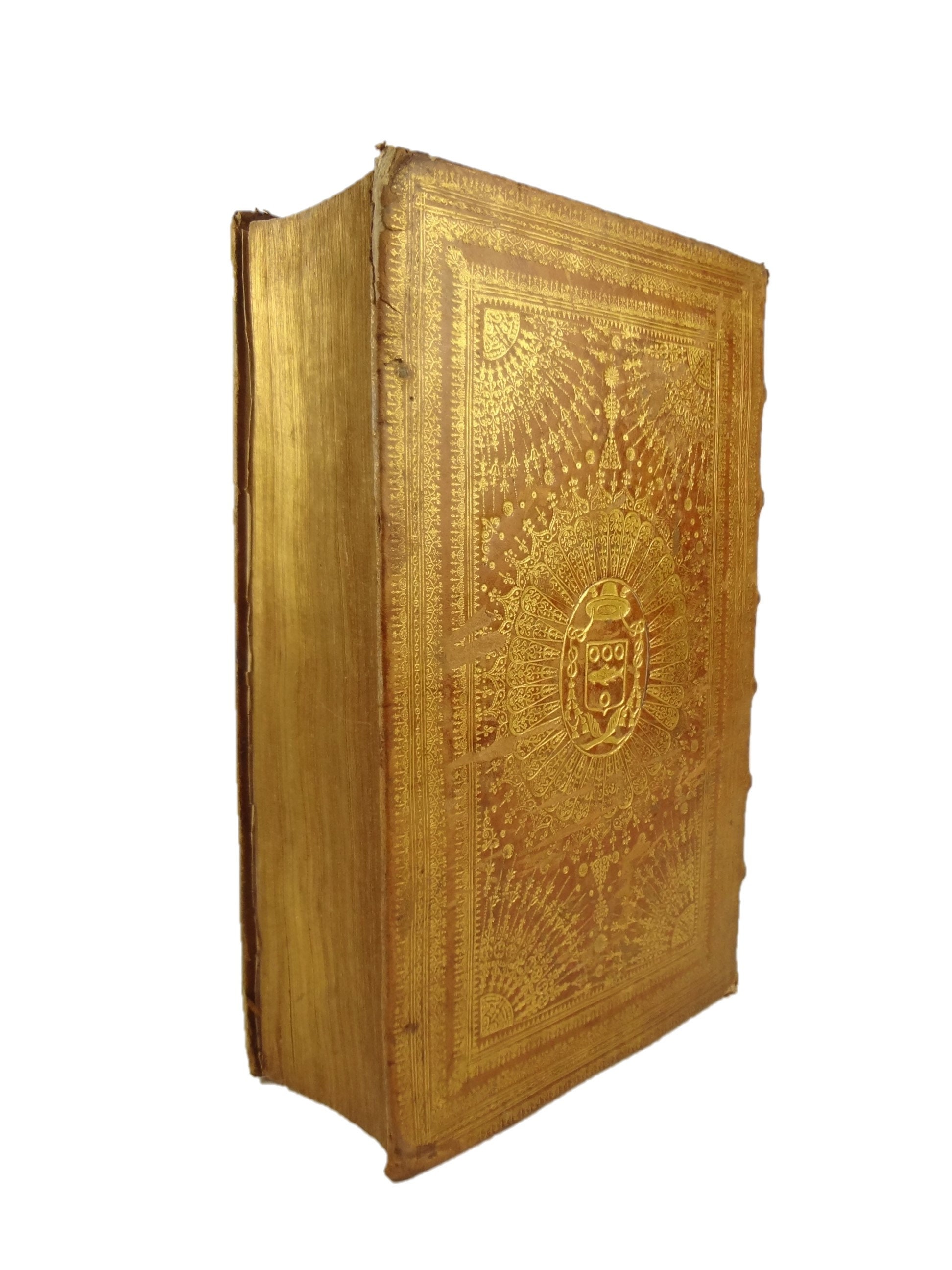 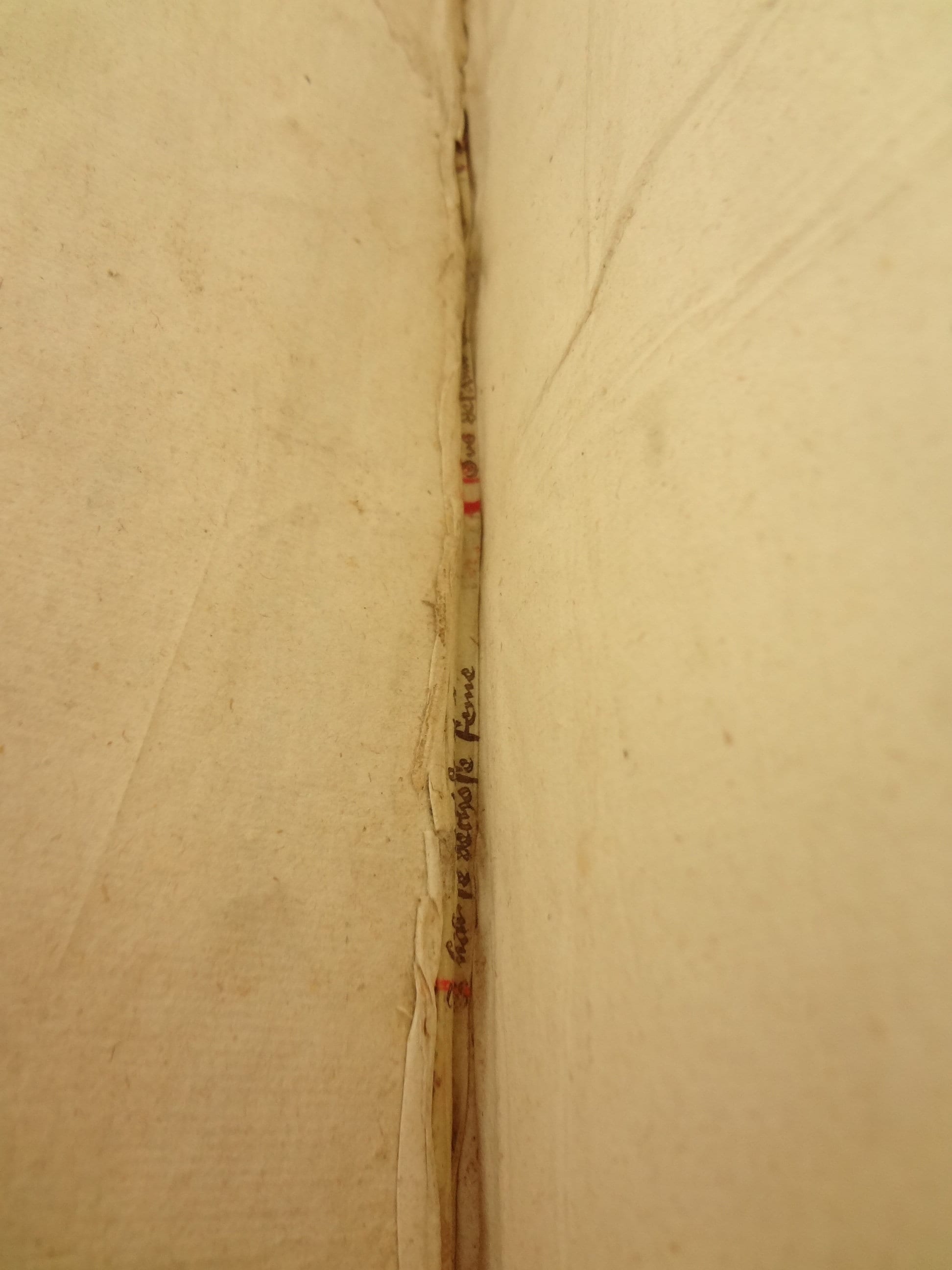 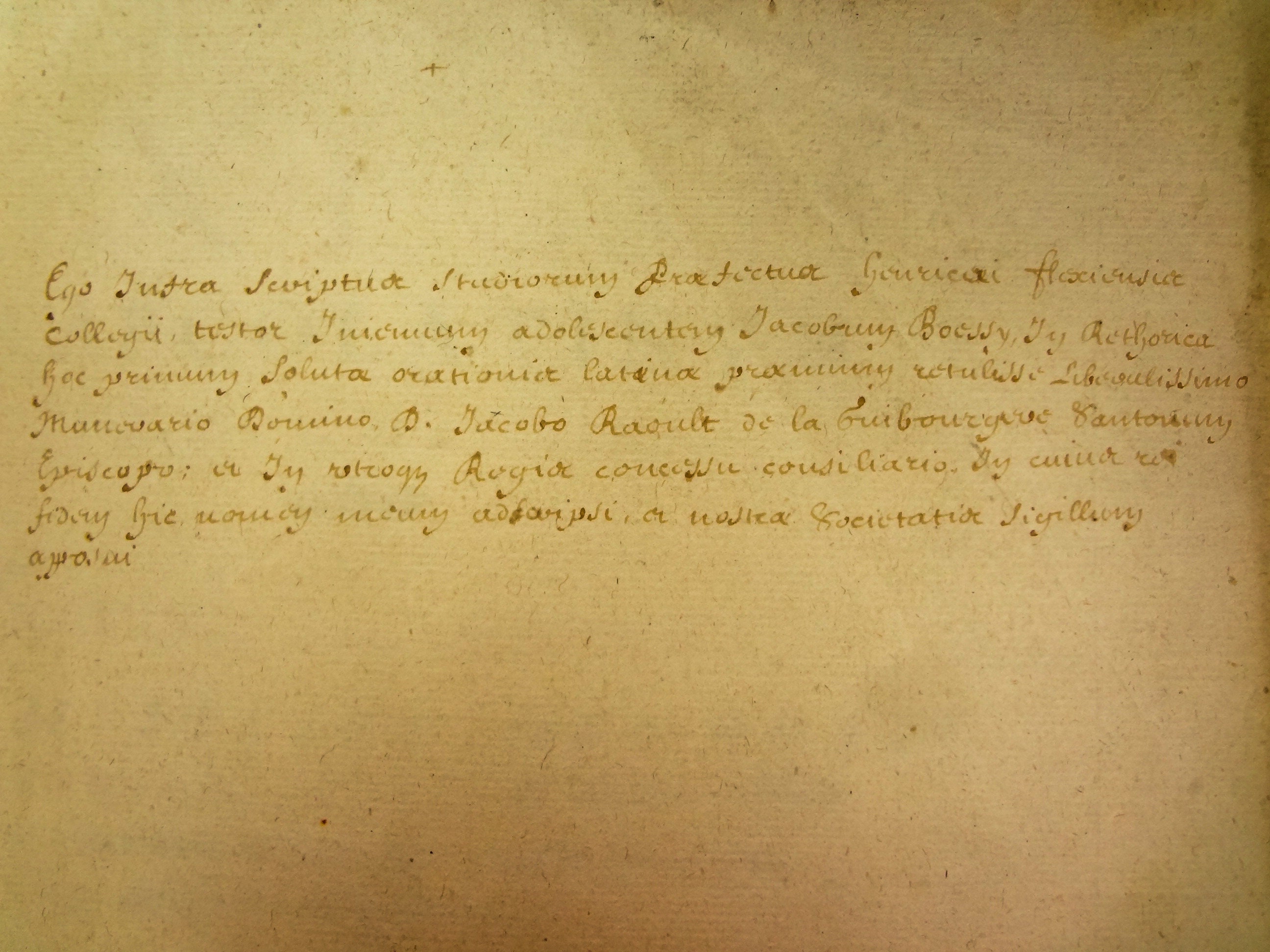 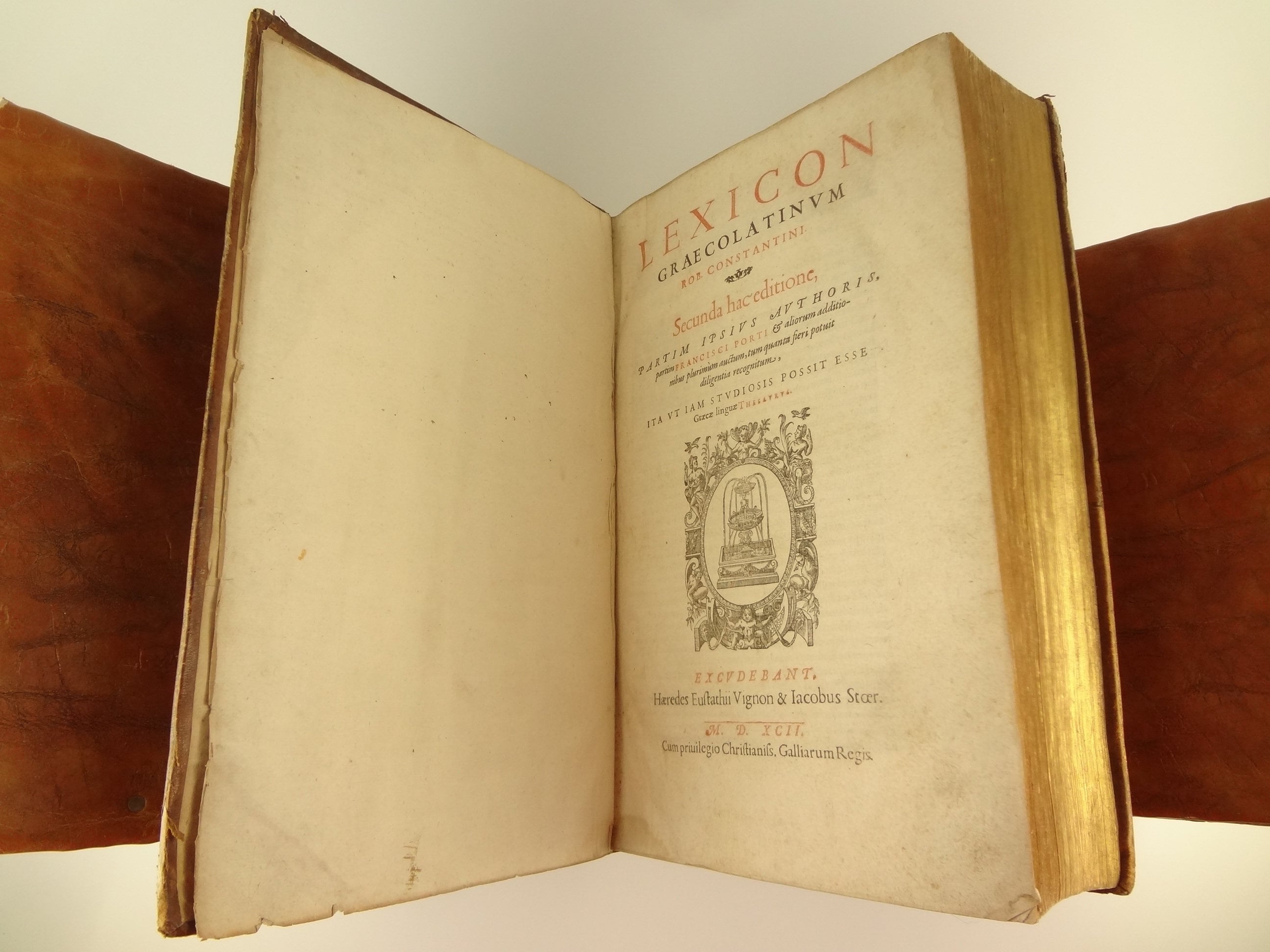 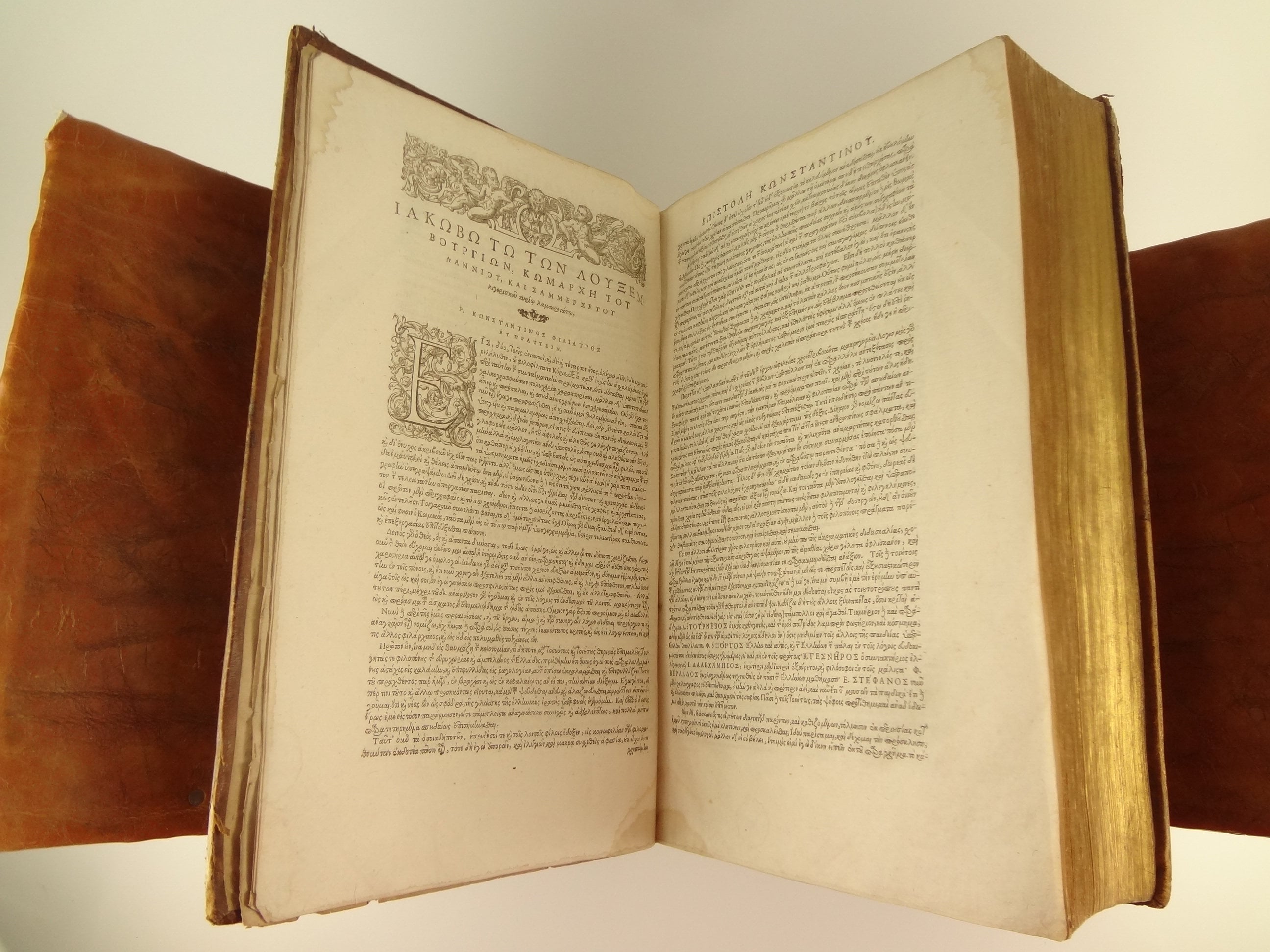 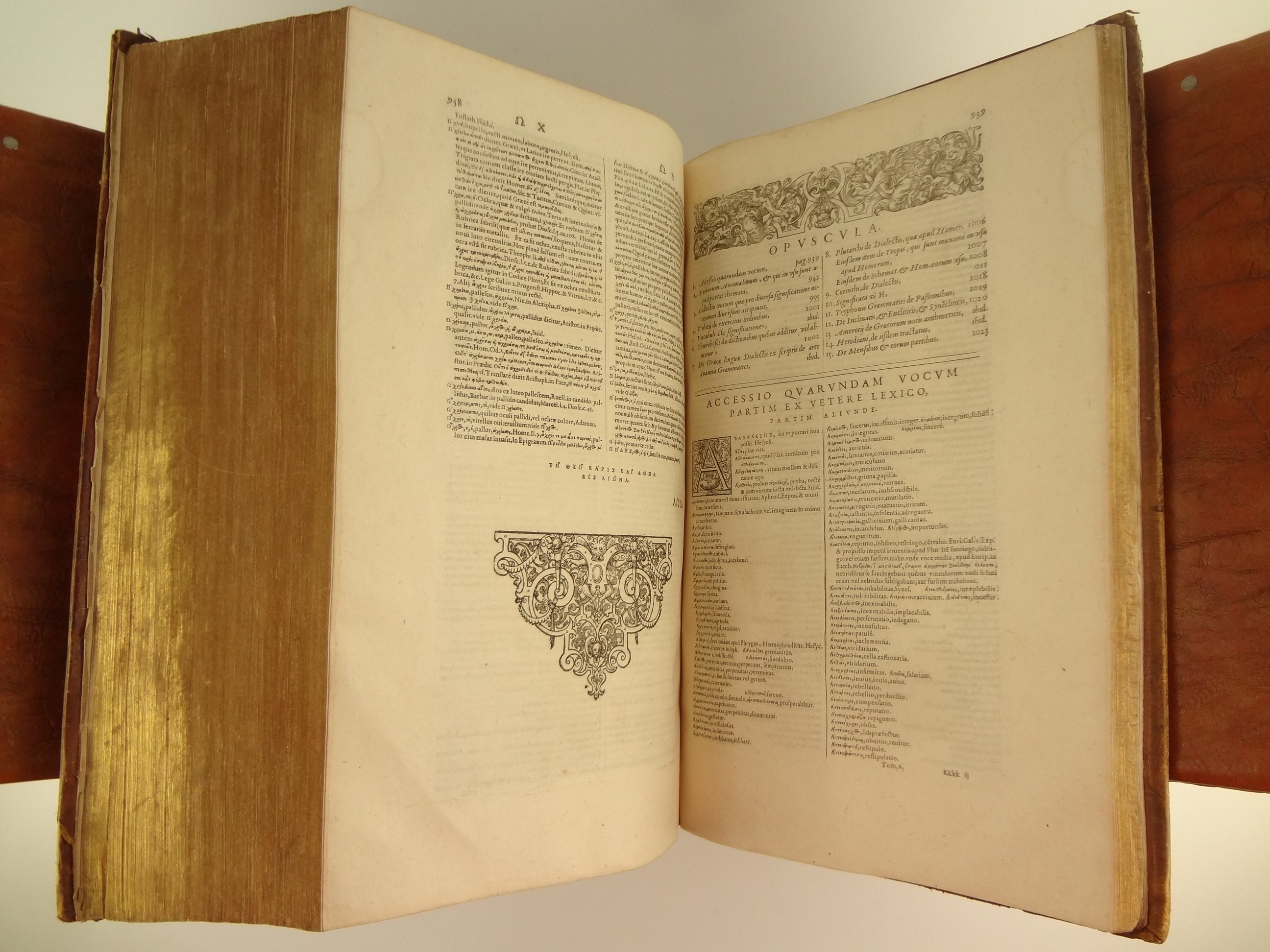 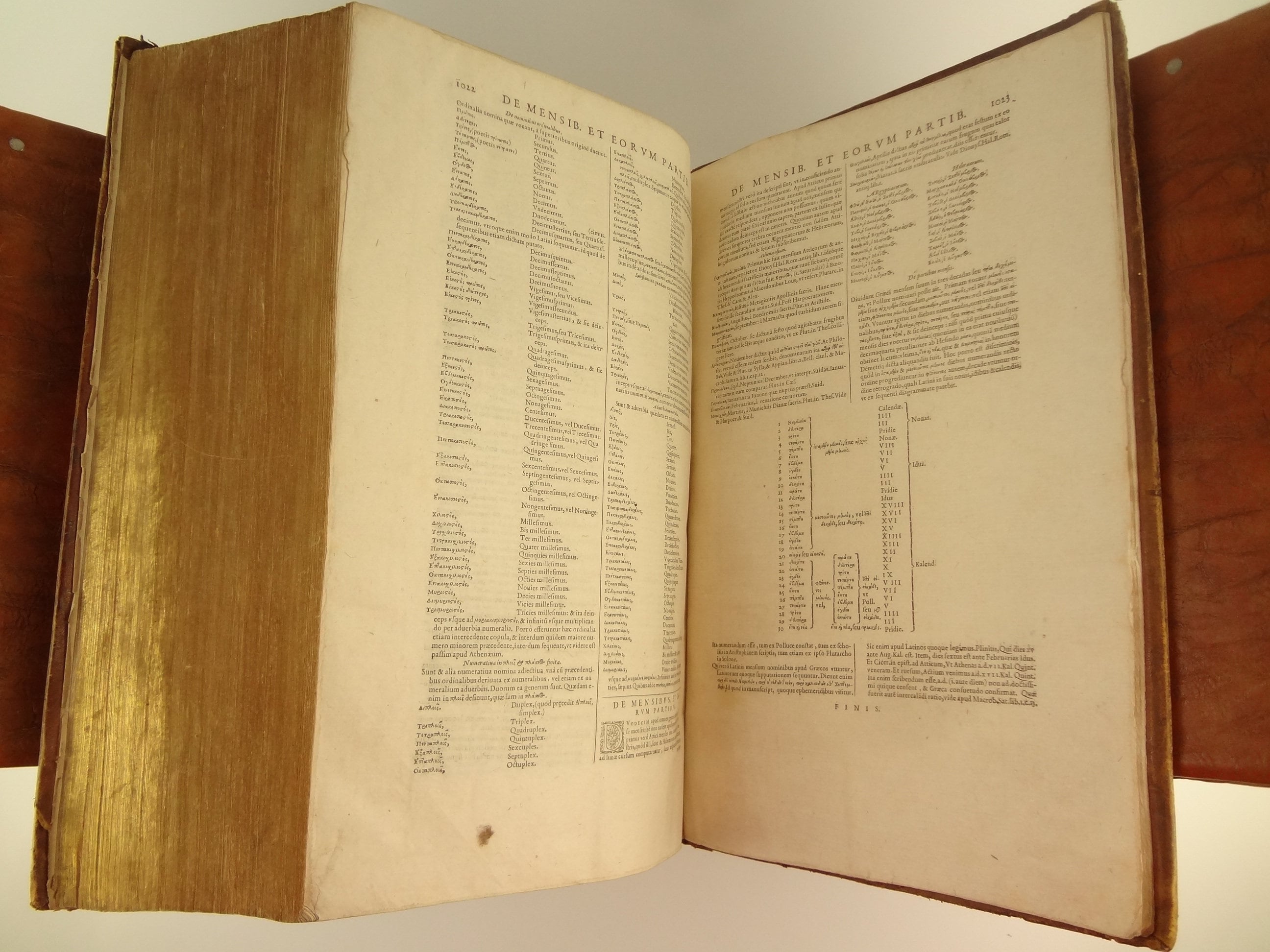 A stunning 17th century binding graces this 16th century Greek Latin Lexicon (two volumes, in one binding). Bound for the Bishop Jacques Raoul de la Guibourgere, with his coat-of-arms at the center of the boards.

Within, there is an inscription mentioning "Raoult de la Guibourgere", Latin orations, and "sigillum". I'm struggling to translate it, but it likely is celebrating the Bishop's completion of training for ecclesiastical work (1630).

El Gascon is the most noted binder from this period (circa 1630) and if you study his works you'll see many similar tools; the two binders share this overall arrangement, the fan tool, the sun like flower tool, the roll of dotted alternating circle square triangles, and some of the vine work. Gascon's works seem (to me) to be a little more precise, and the tools slightly sharper, so I believe this to be "The Imitator of El Gascon", who is also well-known and often mentioned. For example, the Bibliophile (who posts on Blogspot), in their post on El Gascon, exhibits a binding (sold in Versaille March 30, 2014) that was attributed to "The Imitator" (by the El Gascon researcher, Raphael Esmerian) that is a near-twin of this binding.

This Greek/Latin Lexicon is extensive and would still provide value in languages studies today. The first volume is the Lexicon (762 pages) and the second volume (1023 pages) is a Greek dictionary and thesaurus, with the words in Greek and the write-ups in Latin.

I have never had a binding with more binder's tools applied to it. The gilt on this book is extravagant and beautiful. I shall be sorry to see it leave my shop.

See pictures. For being almost 400 years old (circa 1630), the binding is very attractive! Some rubbing, edge and shelf wear, etc. Corners bare and bumped. Tie stubs present. Front joints starting to crack at top and bottom, solid in middle. Chipping at top and bottom of spine. Sunning to spine. Library number sticker at bottom compartment of spine.

Despite condition notes, it is mostly clean and clear. There are no annotations, and the moisture marks only intrude at the edges, mostly. Also, the leather still has a nice feel.