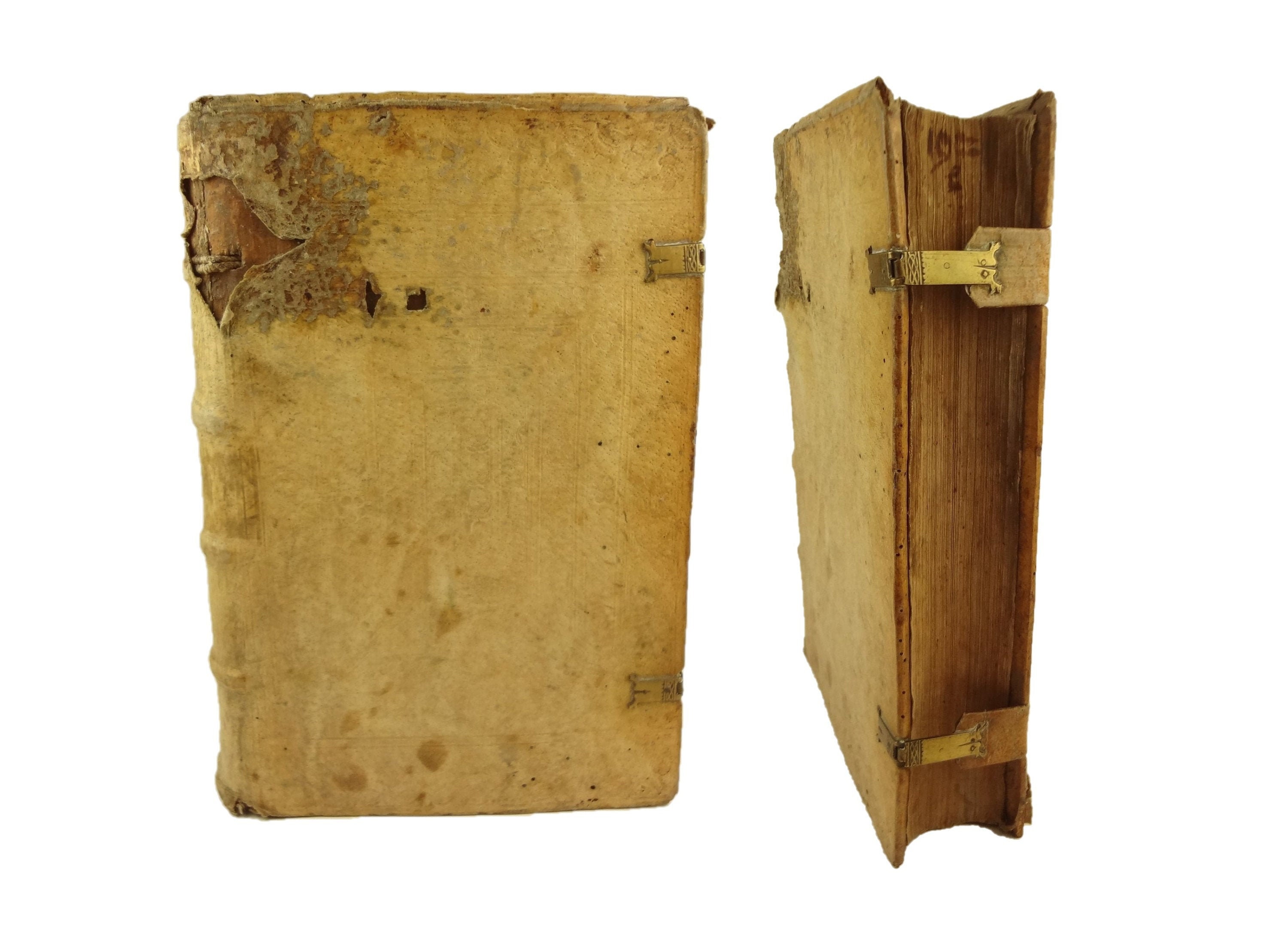 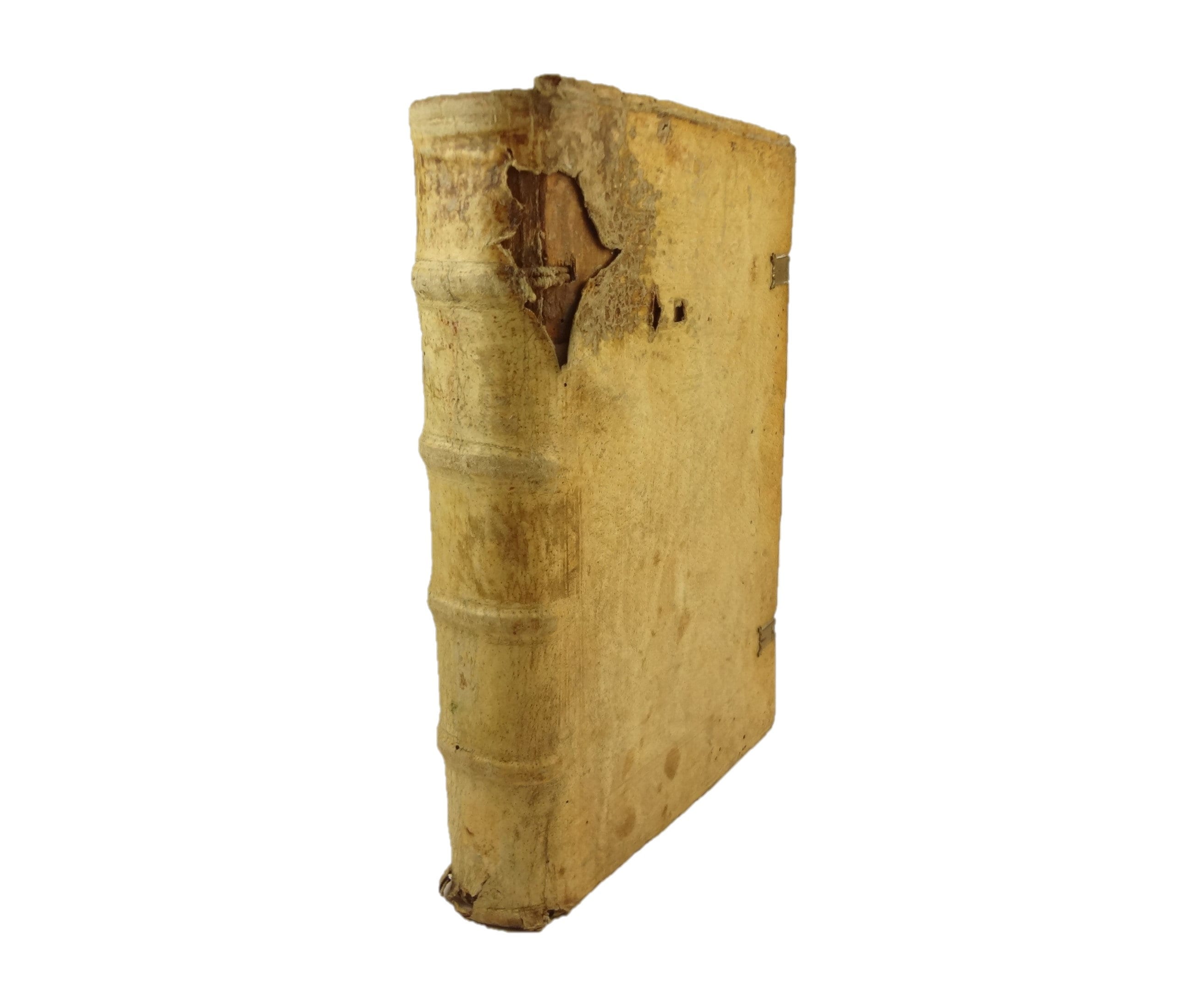 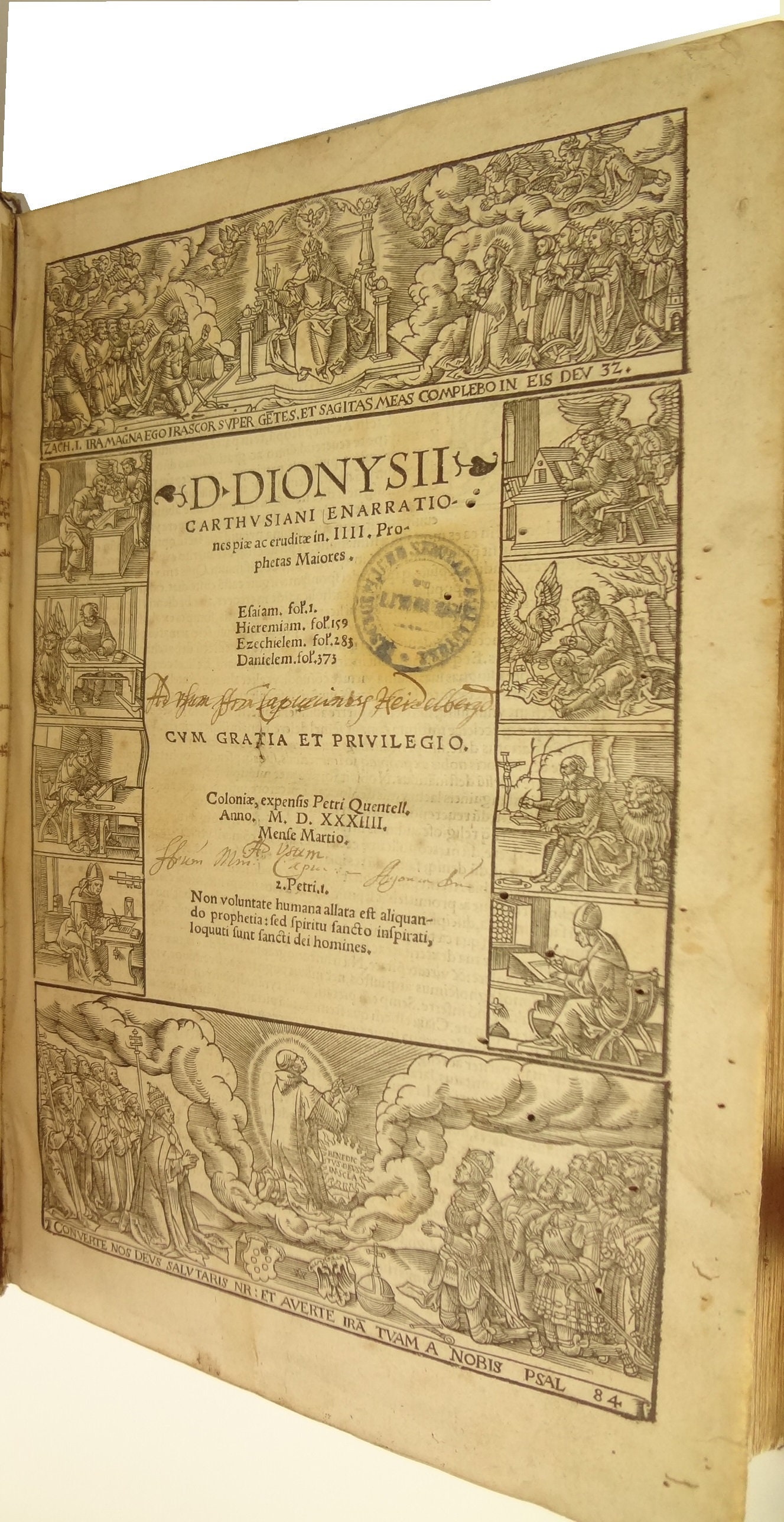 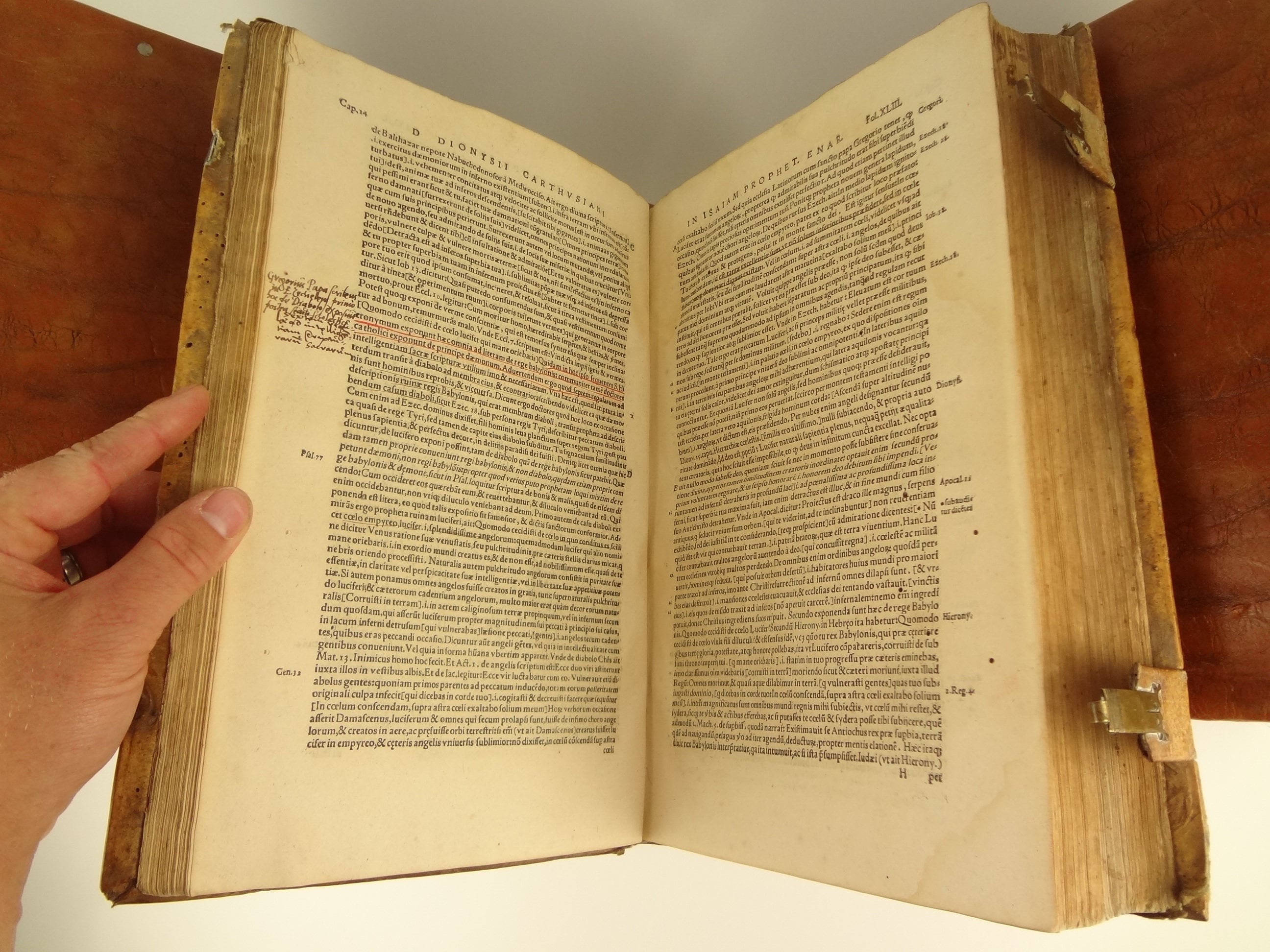 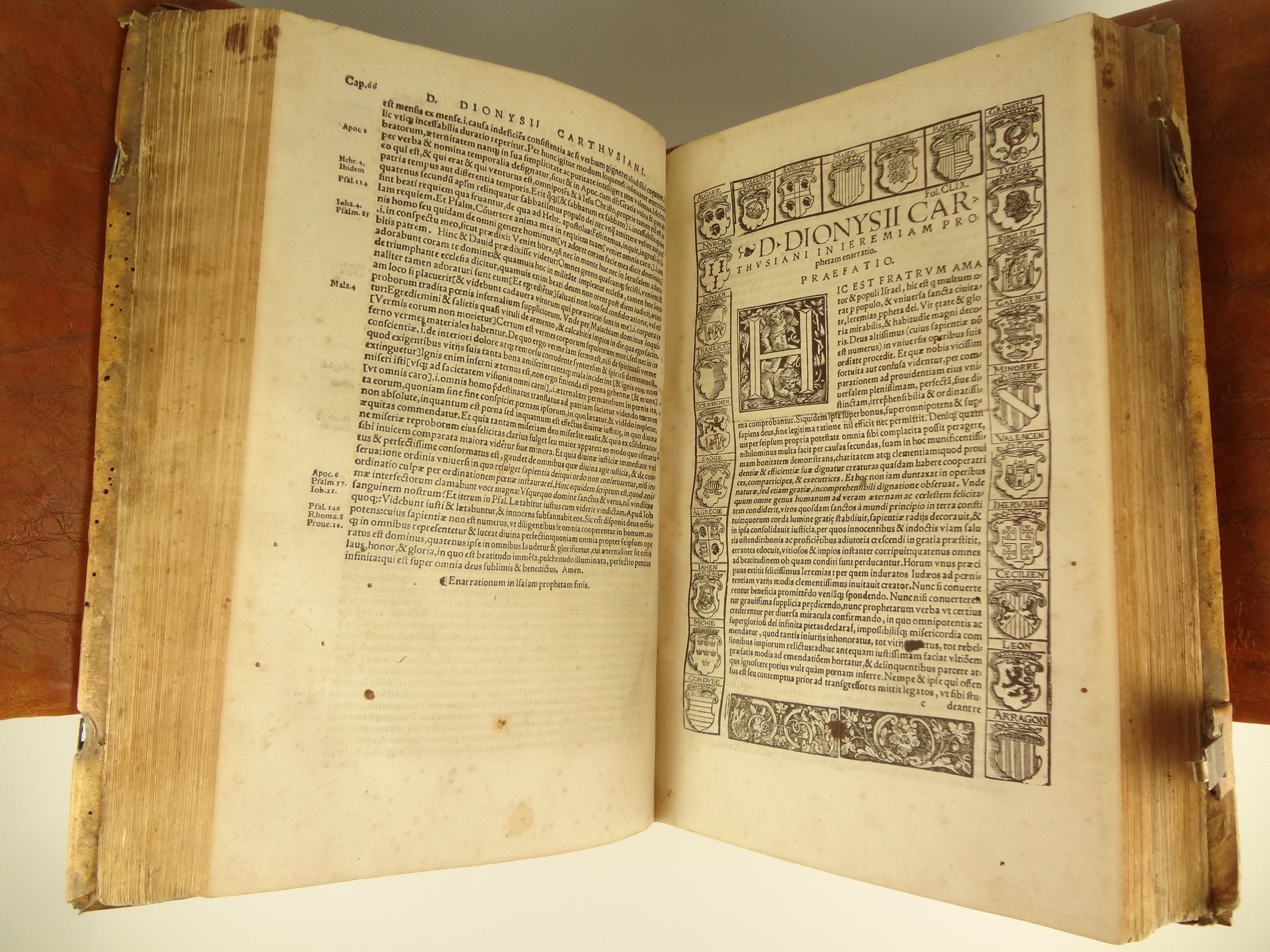 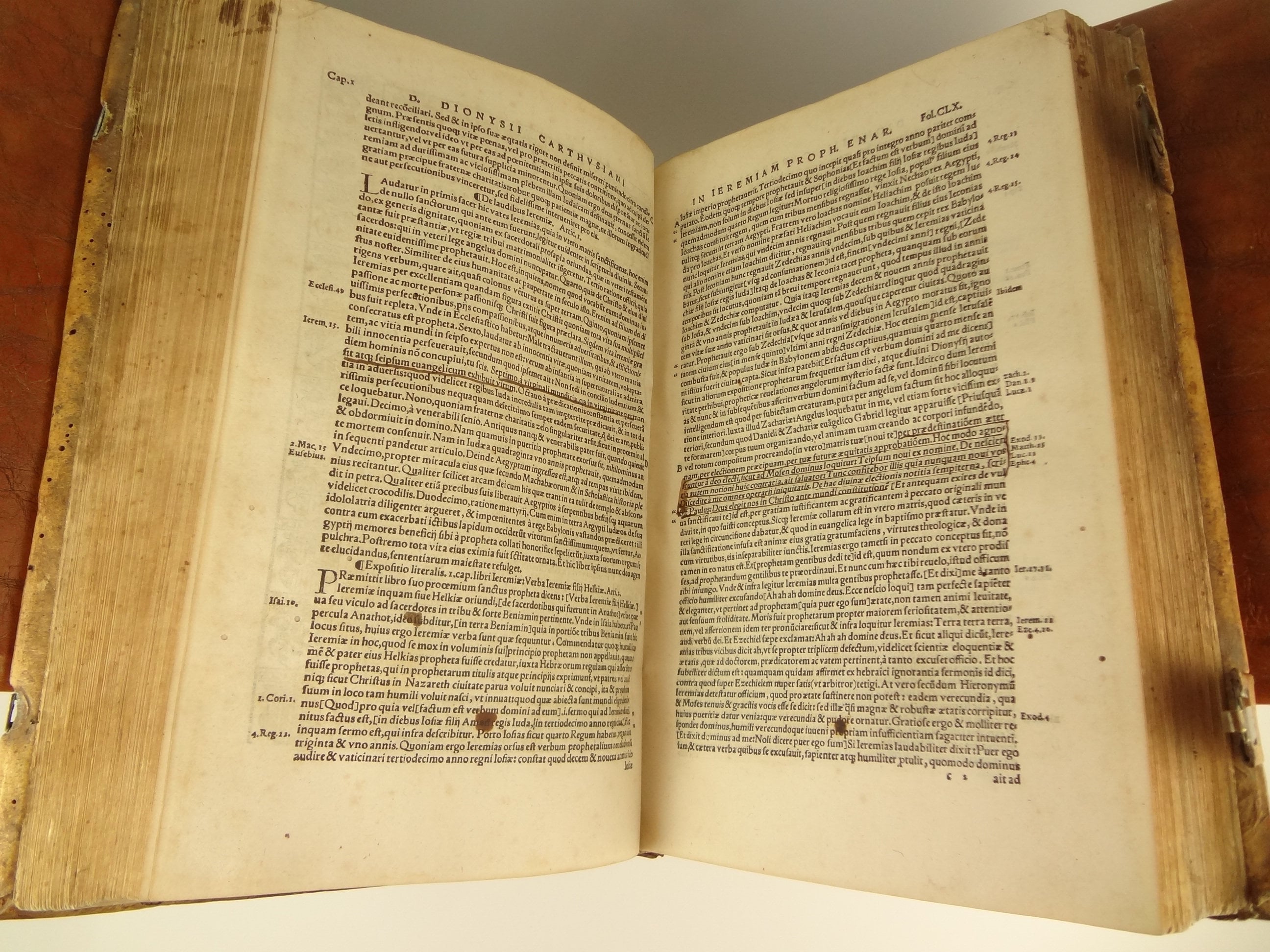 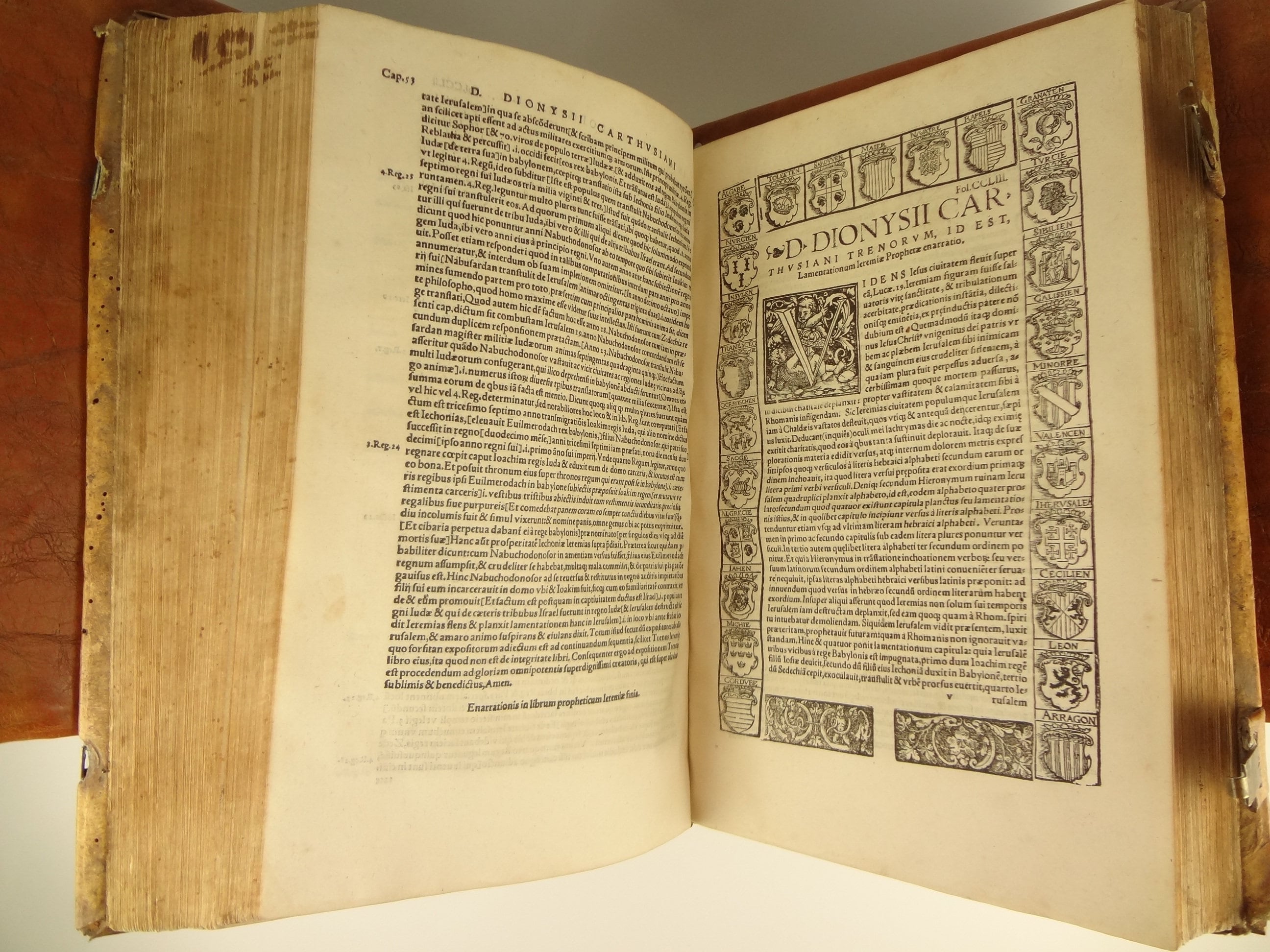 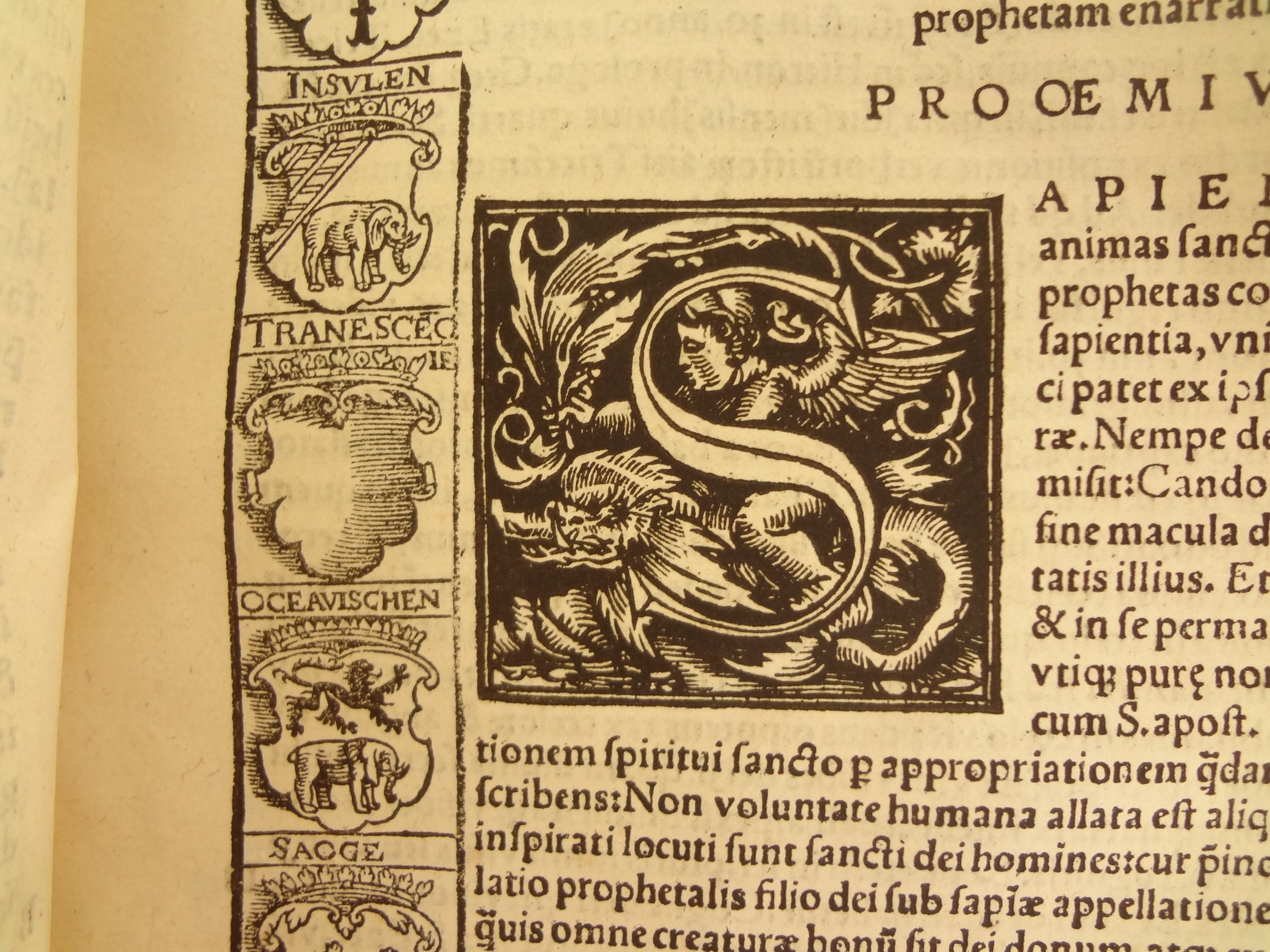 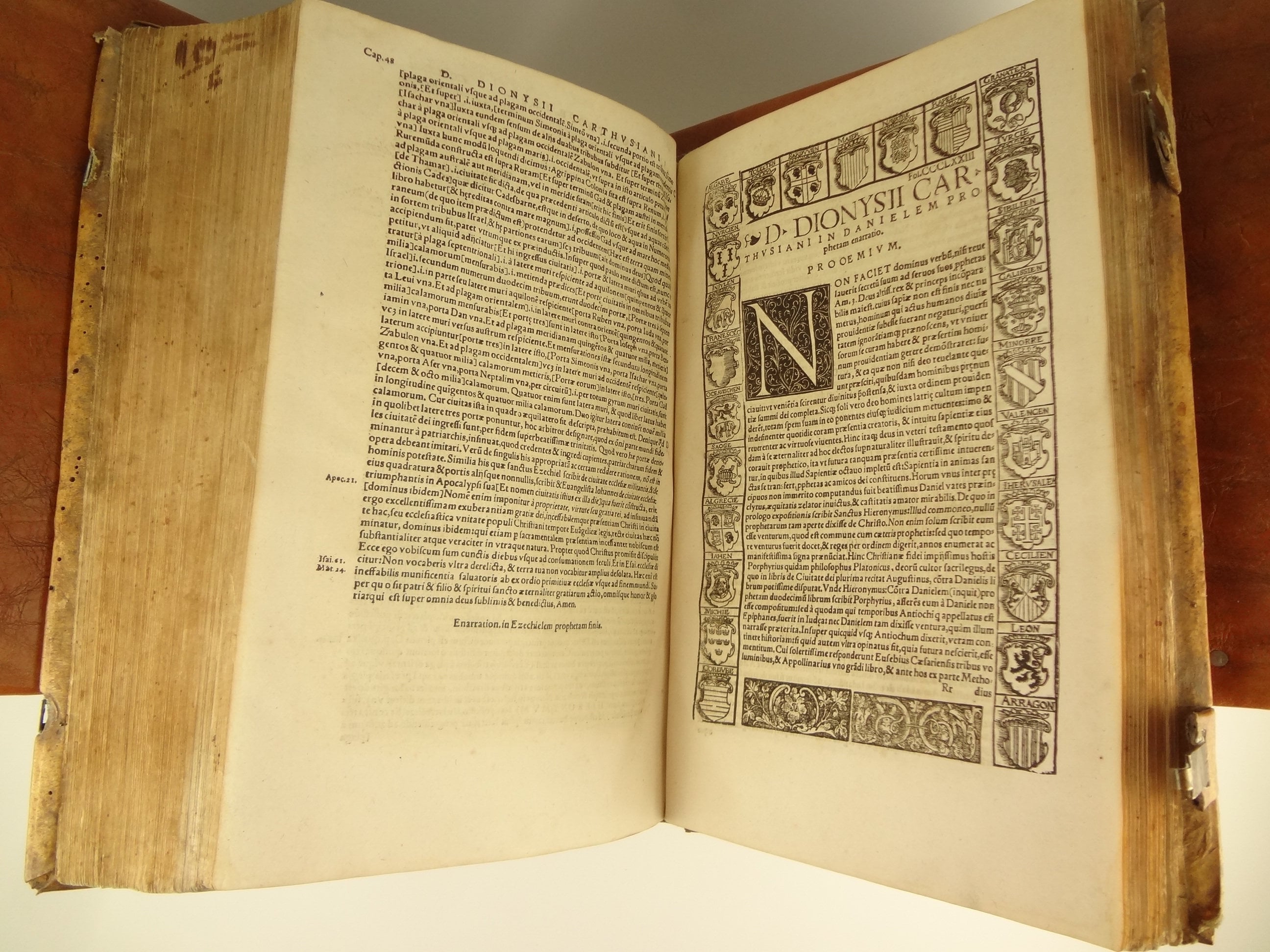 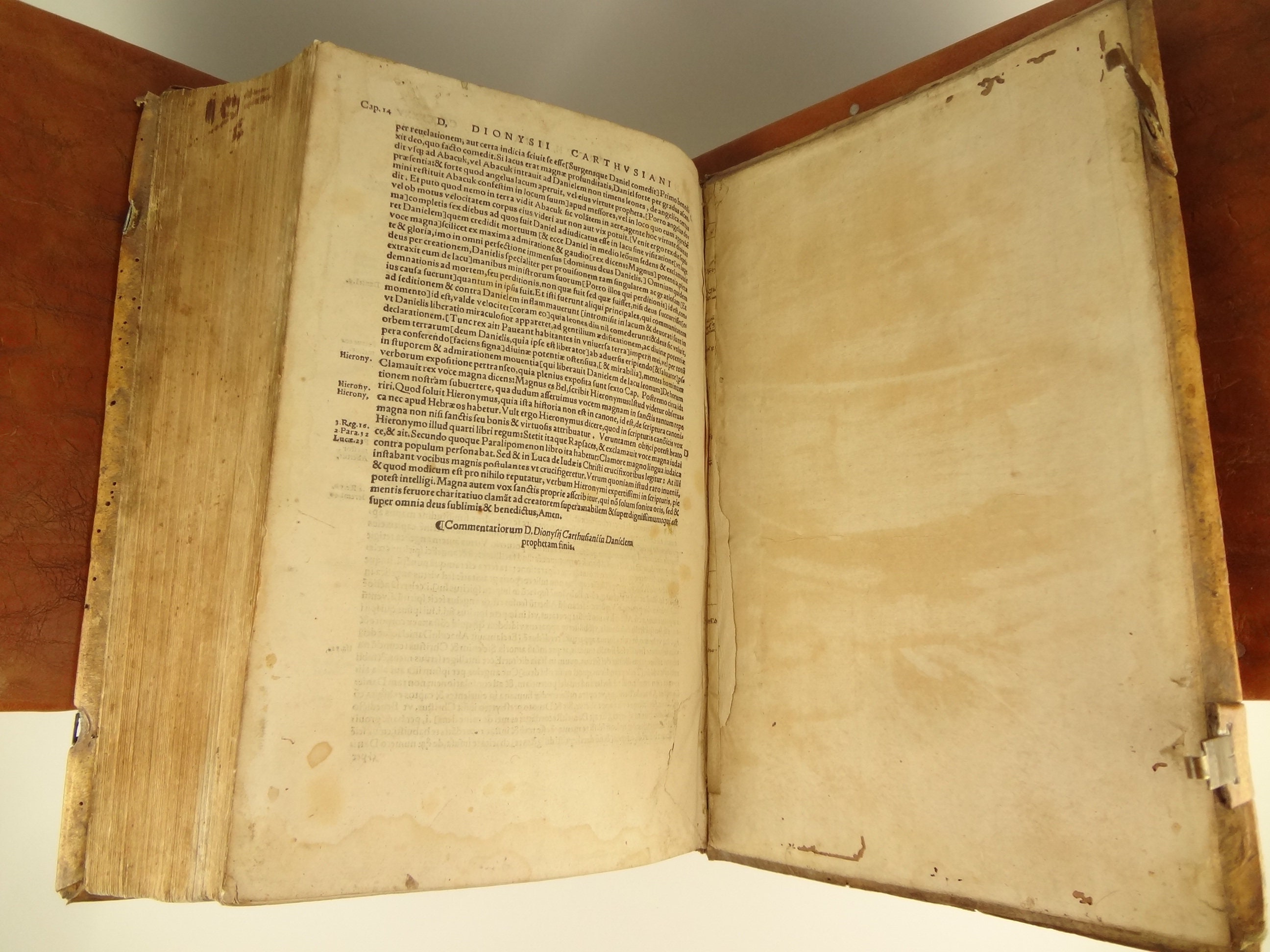 A handsome binding adorns this 1534 edition of Denis the Carthusian's commentaries on the major prophets (Isaiah, Jeremiah, Ezekiel, and Daniel). Printed in Cologne, by Quentell, with woodcuts decorating the title page of each prophet.

The binding is a treat with an open hole in the vellum exposing the 16th century craftsmanship of book binding, with beveled oak boards and thick hearty cords. An added treat, a manuscript on vellum was used as the crash, with the edges of it revealed at the front and rear pastedown gutter. This book would work wonderfully well to demonstrate this style of binding in an academic setting. Also, true to the time, the fore-edge had the shelf number applied to it in manuscript (26i - curiously upside down, as it is also written on the pastedown).

The provenance could use more research. The stamp is blurred, and the 1st inscription is crossed out, but appears to say that is was for the Capuchins in Heidelberg, but I find little on the Capuchin's being in Heidelberg.

"The great contribution of Denys the Carthusian was to synthesize all previous doctrine on the spiritual life and then to make an evaluation of the various conclusions. He wrote over 150 works, which include commentaries on the entire Bible and over 900 sermons. He began by commenting the Psalms in 1434, and then went on to comment the whole of the Old and the New Testament. After seeing one of his commentaries Pope Eugene IV exclaimed: "Let Mother Church rejoice to have such a son!" He was consulted as an oracle by men of different social standing, from bishops and princes downwards; they flocked to his cell, and letters came to him from all parts of the Netherlands and Germany. The topic of such correspondence was often the grievous state of the Church in Europe, i. e. the evils ensuing from relaxed morals and discipline and from the invasion of Islam. Soon after the fall of Constantinople (1453), impressed by revelations God made to him concerning the terrific woes threatening Christendom, he wrote a letter to all the princes of Europe, urging them to amend their lives, to cease their dissensions, and to join in war against their common enemy, the Turks. A general council being in his eyes the only means of procuring serious reform, he exhorted all prelates and others to unite their efforts to bring it about." - Wikipedia

See pictures. Vintage patina, with the pleasing look of history. Rubbing and wear at edges of binding. Several holes in vellum on front board, that display the beveled oak board and cords under. Some spots, rubs etc to binding. The blind stamps are well worn. A little chipping at bottom of spine, endband still in place. Clasps present and work well. A few institutional marks on pastedown. Ownership marks and stamp on title page. Small worm holes throughout, not overly excessive. Occasional thumb, dog-eared page, edge chip, fox spot and edge toning. Light moisture marks throughout coming in from edges, darker at beginning. Occasional underlining and marginal annotations in an old hand. A very handsome book that carries its age very well.