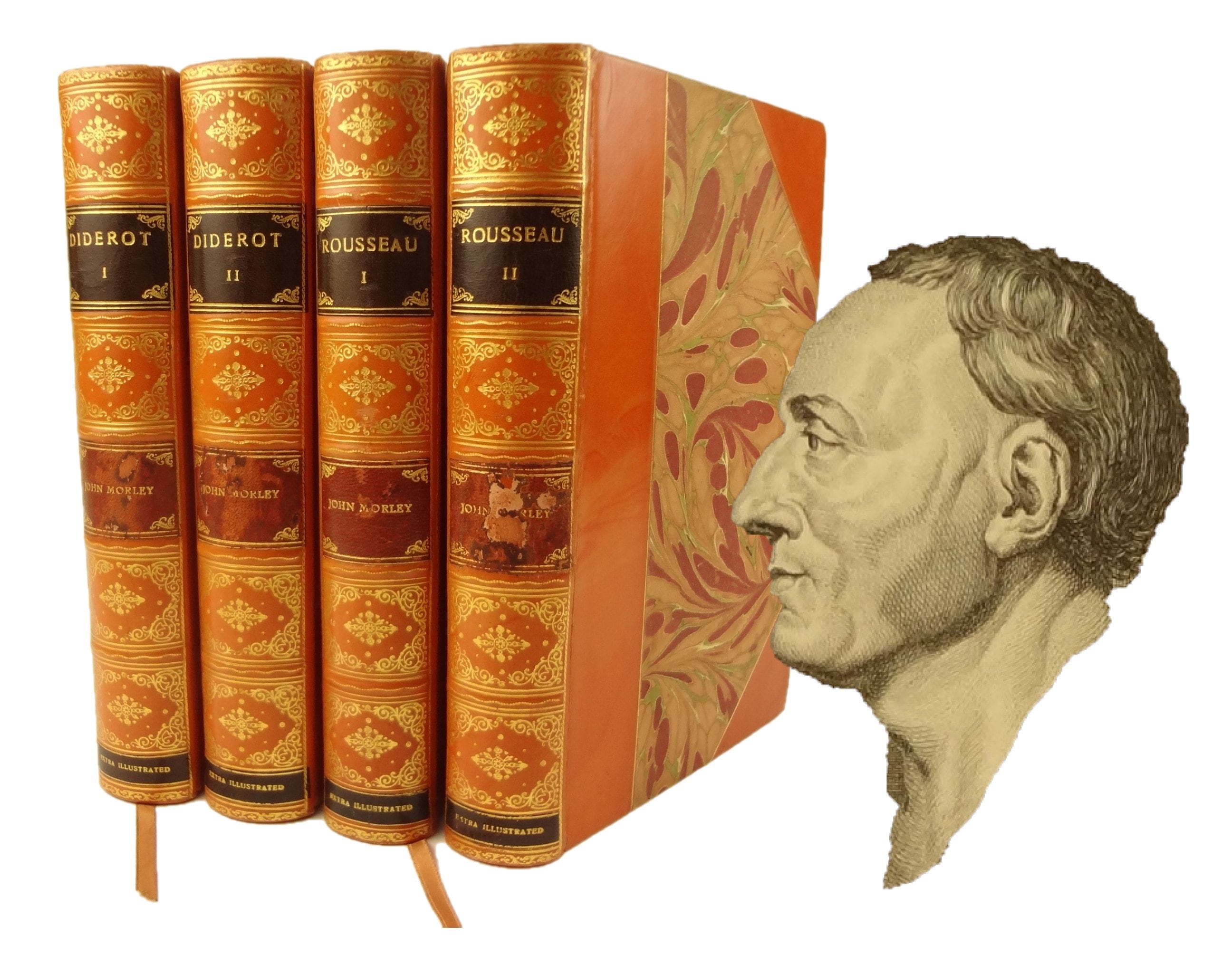 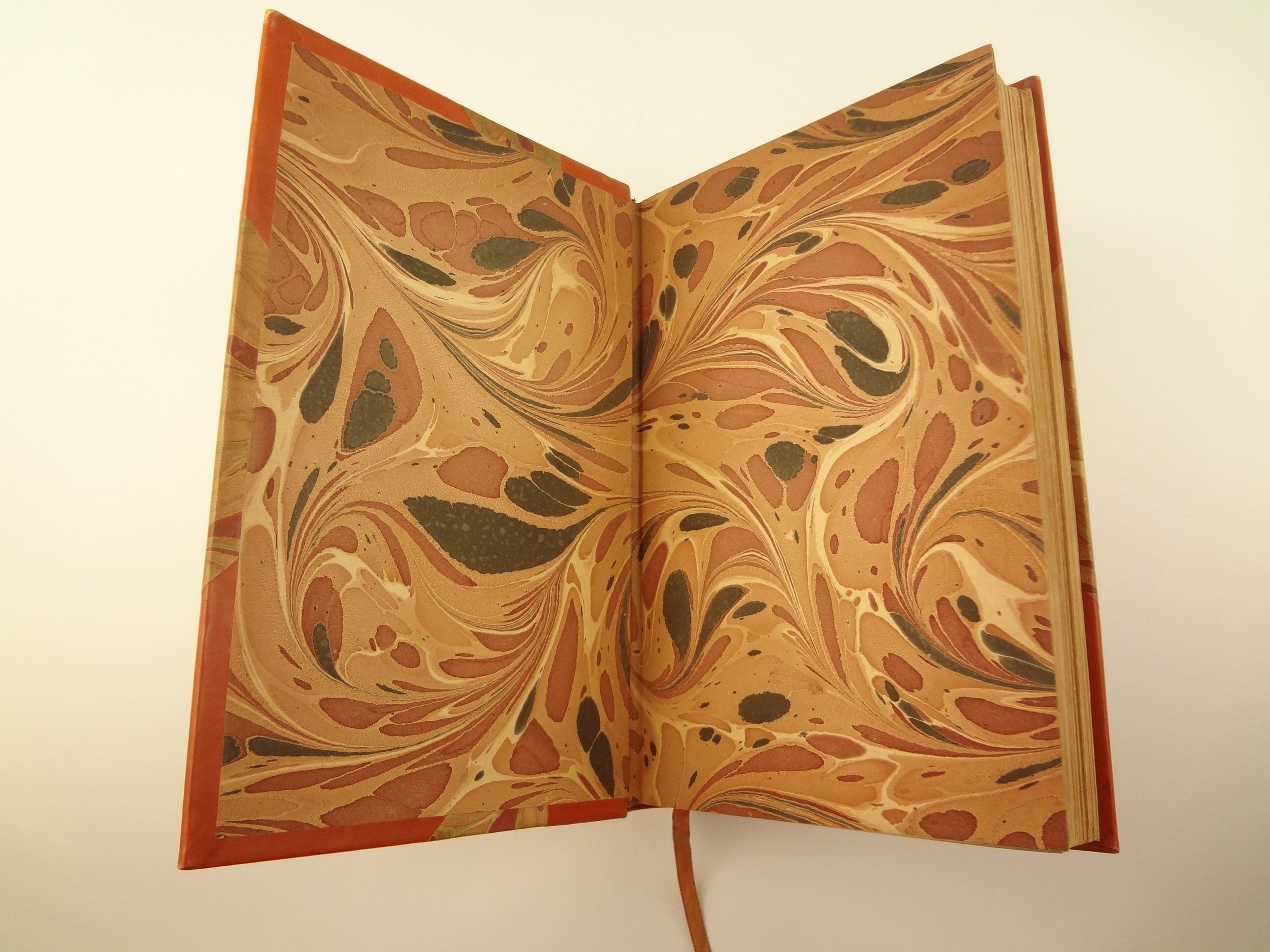 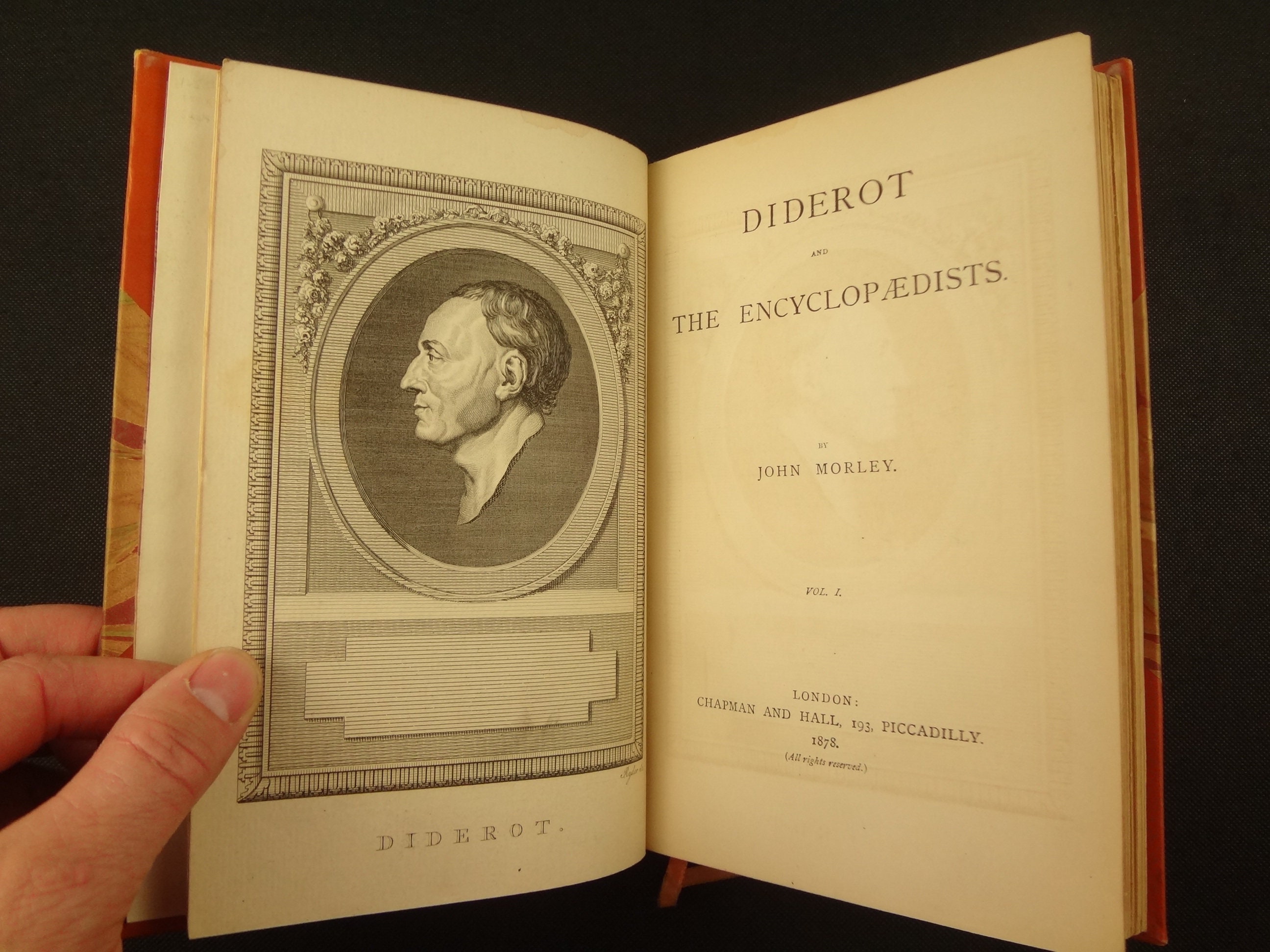 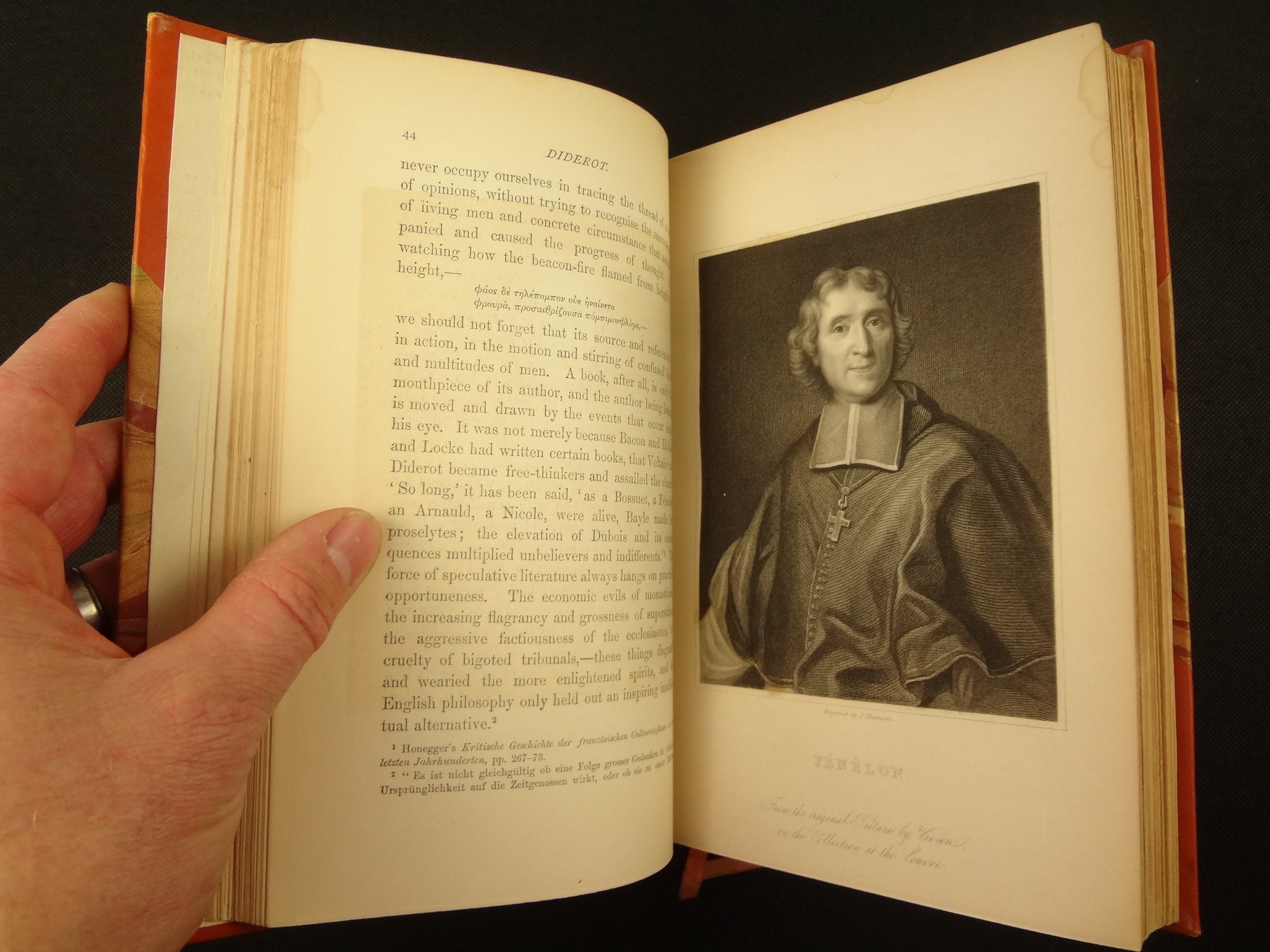 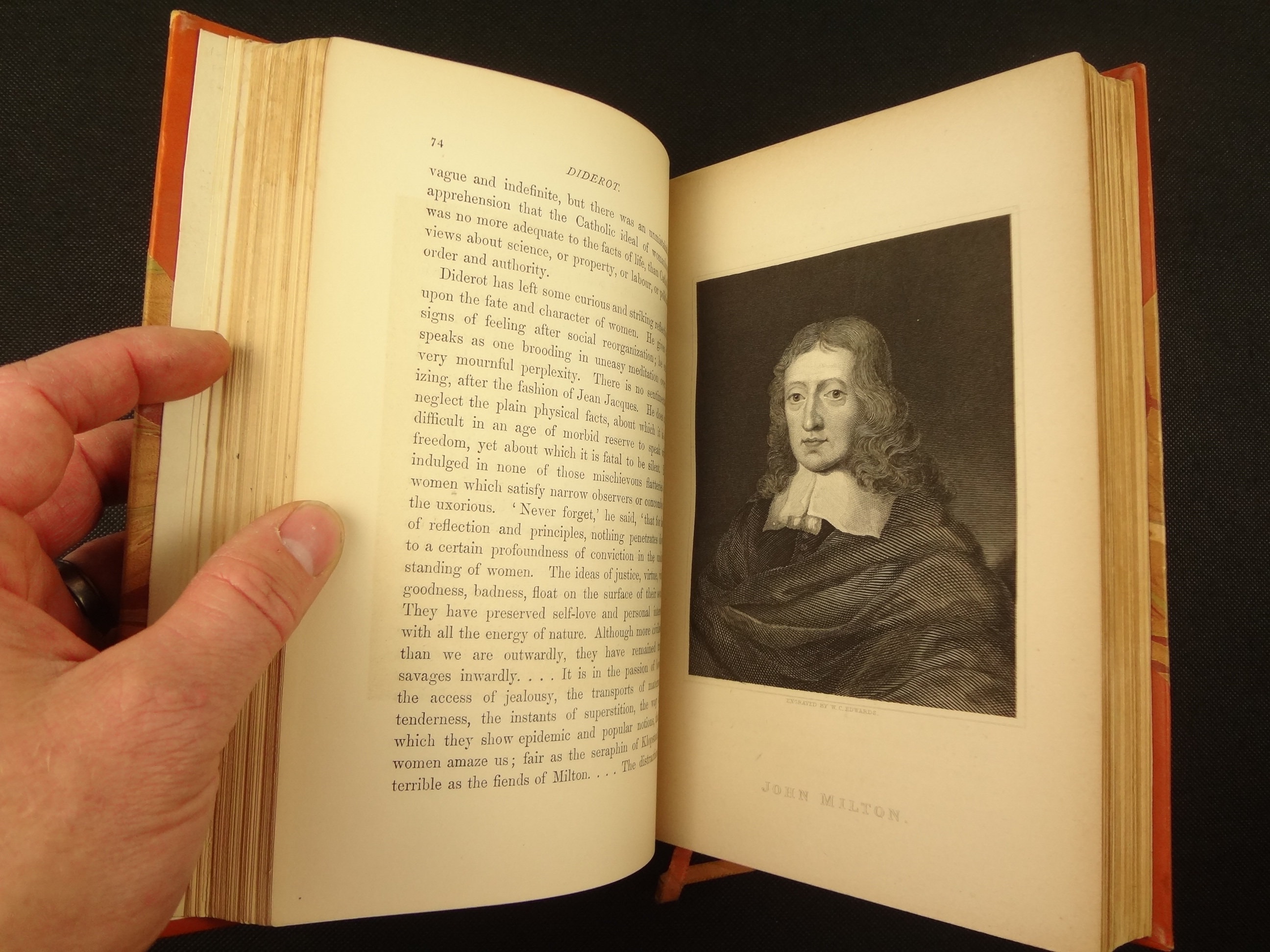 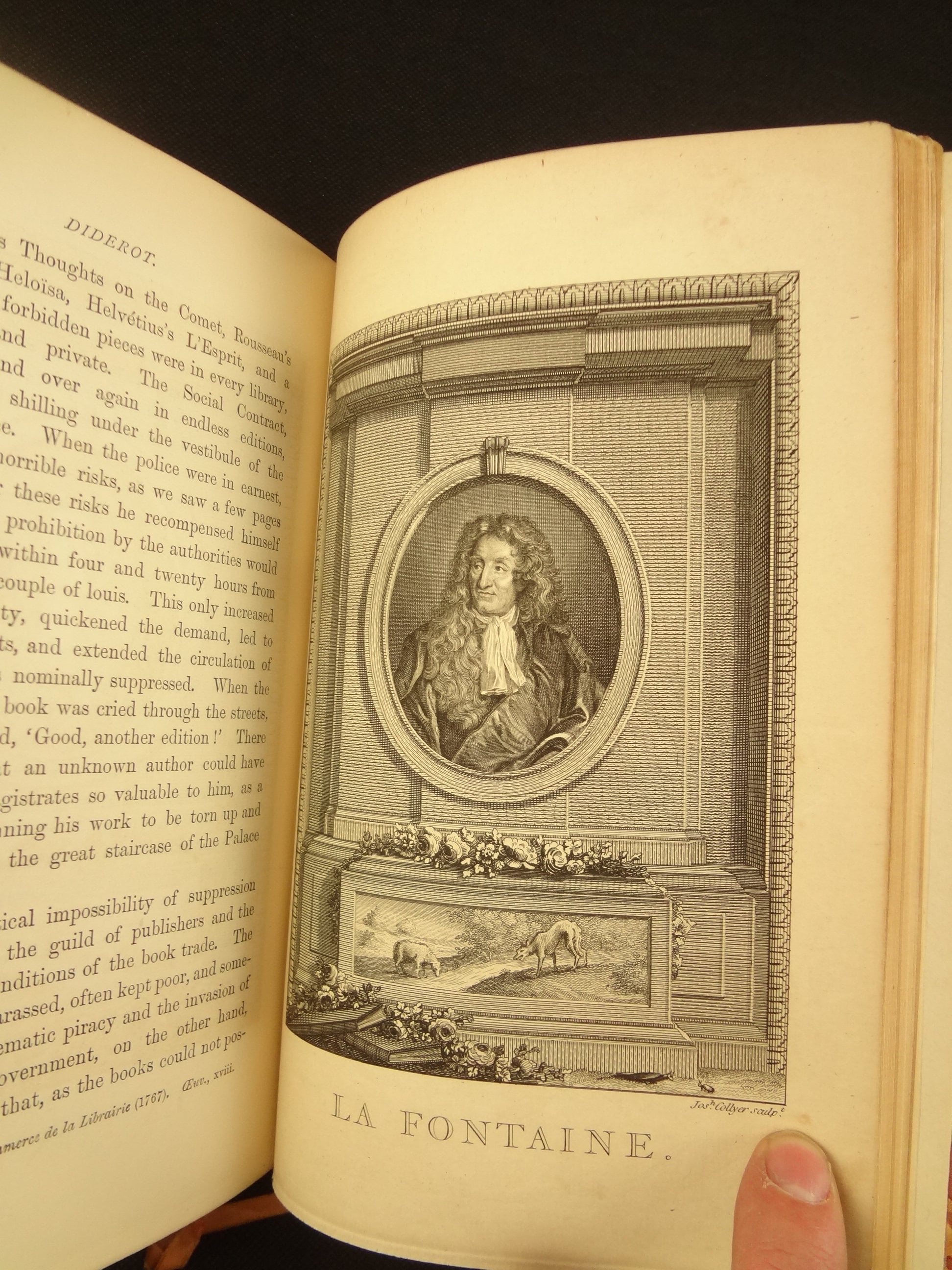 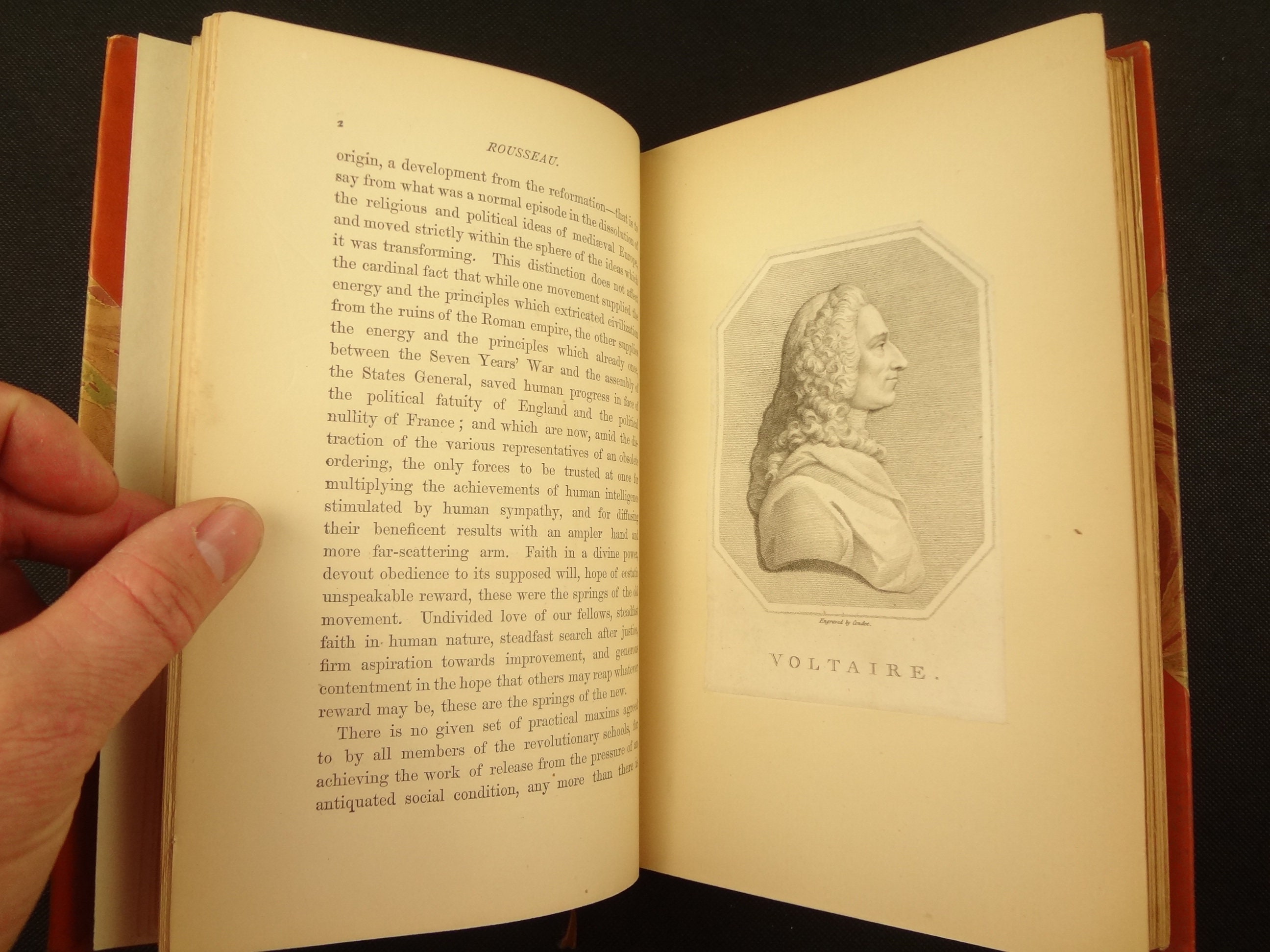 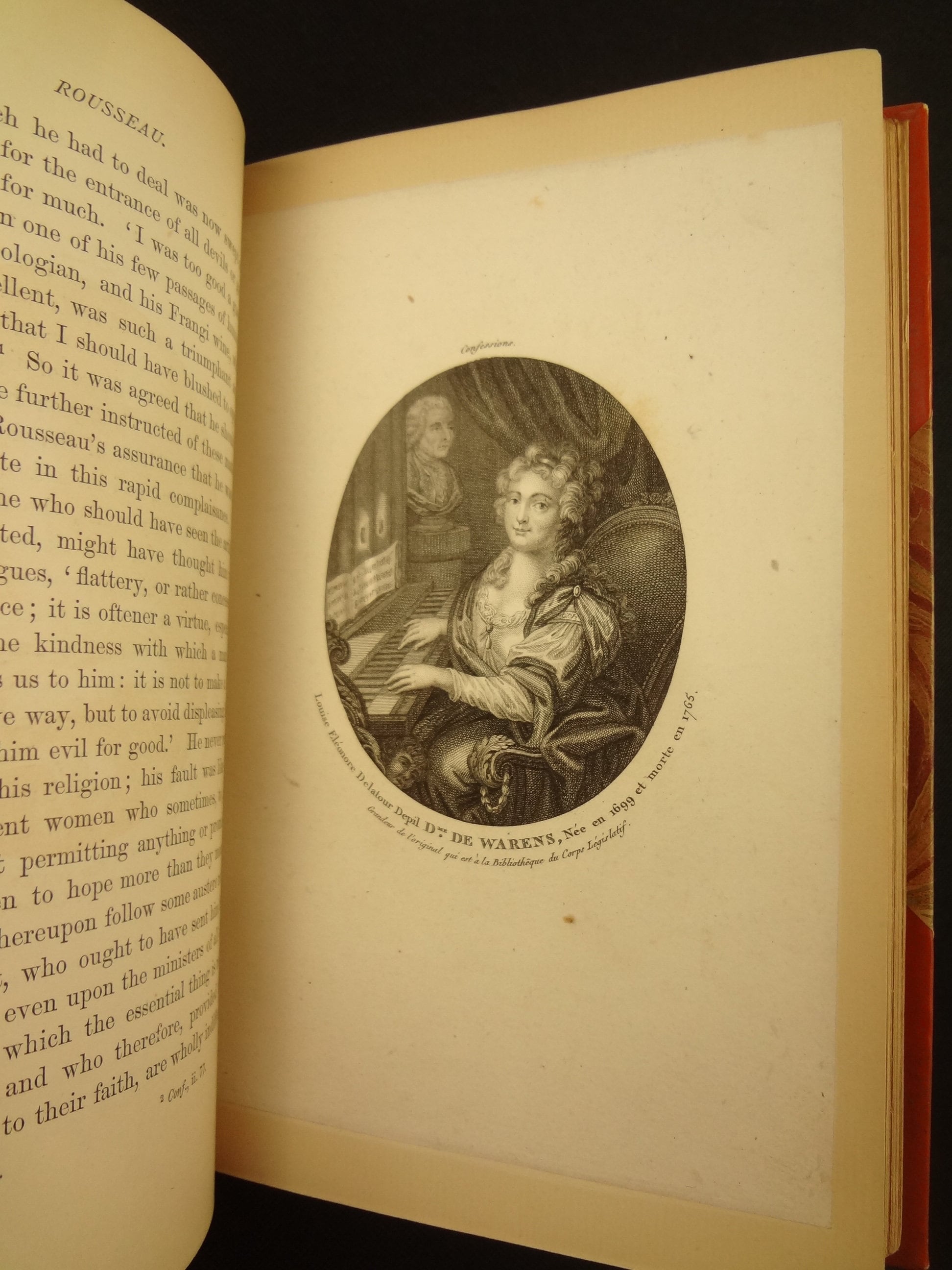 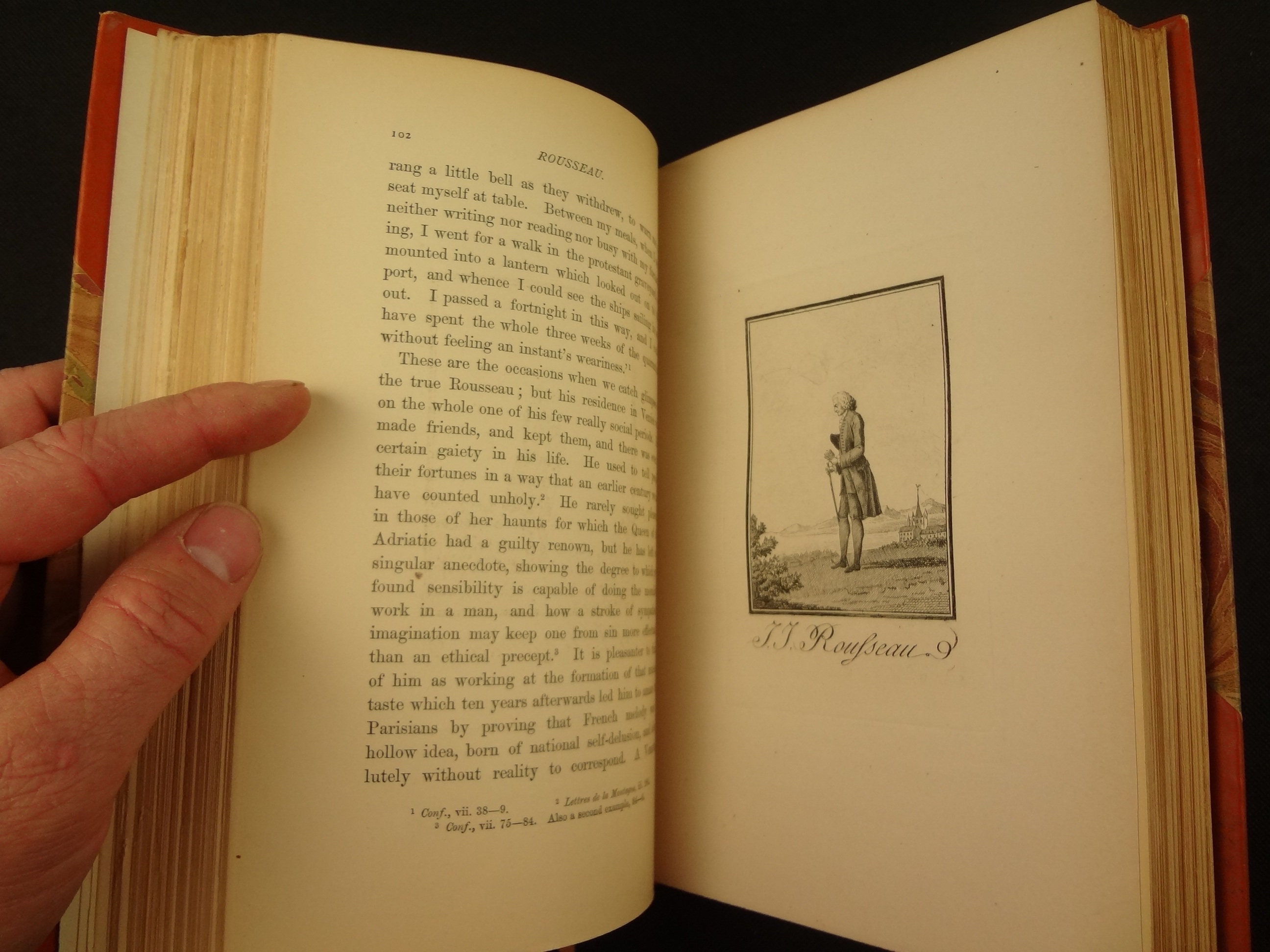 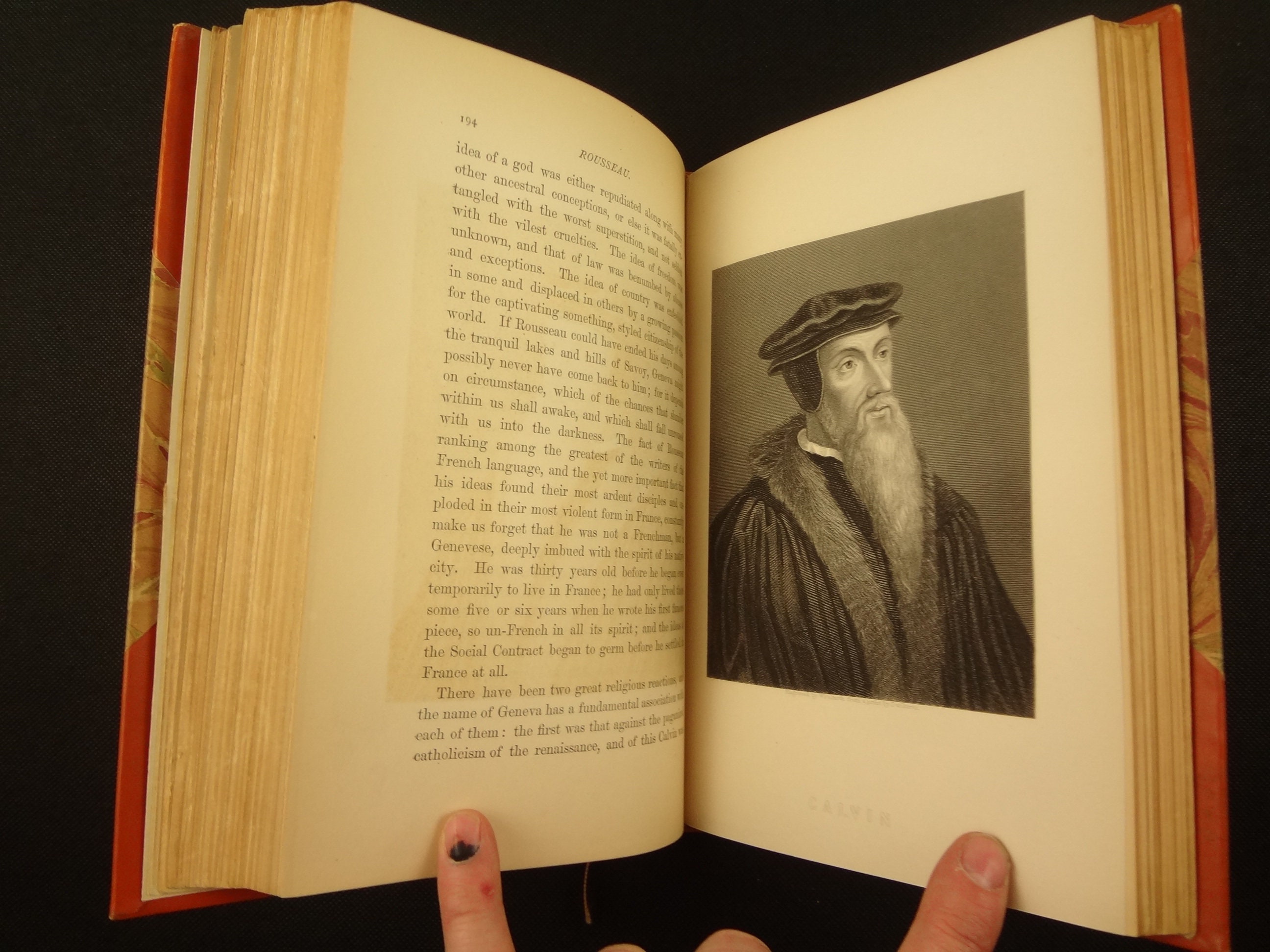 Extra-Illustrated. 1873 Rousseau and 1878 Diderot, both by John Marley. Printed by Chapman and Hall.

Both extra-illustrated, John Morley's biographies on Rousseau (1873) and Diderot (1878), bound-to-match. I count seventy-three added portraits, in a variety of styles (my favorite is an 1869 "Peint par David Saint-Just", engraved by Frederic Desire Hillemacher). Morley's biography records these years of printing as the first editions. The bindings are handsome and bright, with the perfect touch of sophisticated aging, and "EXTRA ILLUSTRATED" emblazoned in gilt at the base of their spines.

Initially a journalist, he was elected a Member of Parliament in 1883. He was Chief Secretary for Ireland in 1886 and between 1892 and 1895, Secretary of State for India between 1905 and 1910 and again in 1911 and Lord President of the Council between 1910 and 1914. Morley was a distinguished political commentator, and biographer of his hero, William Gladstone. Morley is best known for his writings and for his "reputation as the last of the great nineteenth-century Liberals”. He opposed imperialism and the Boer War. He supported Home Rule for Ireland.

See pictures. Some shelf wear. A little rubbing to edges and the boards and spines have a few scuffs, but they are still very handsome and colorful. I will note, the silk place-keeping ribbons are still intact, which means the top-edge hasn't been exposed to too much dust (it eats right through silk). Bookseller notes on back of flyleaf "Extra-Illustrated" and erased prices. Occasional thumbing. A little toned throughout. No tissue guards at frontis, allowing ghosting to facing title page. Occasional singular fox spot. Volume one, Diderot, there is a repaired ring tear on page 1, approx. 3 inches. At front of Diderot v1 slight moisture mark at upper edges/margins of pages, does not approach text. Diderot v2 p75 pencil mark erased. Occasional foxing to plates, and ghosting of facing page. 1/2 title Rous. v2 bottom corner torn off. Occasional small chip to page edge. Mostly quite clean inside, and many well-mounted portraits.