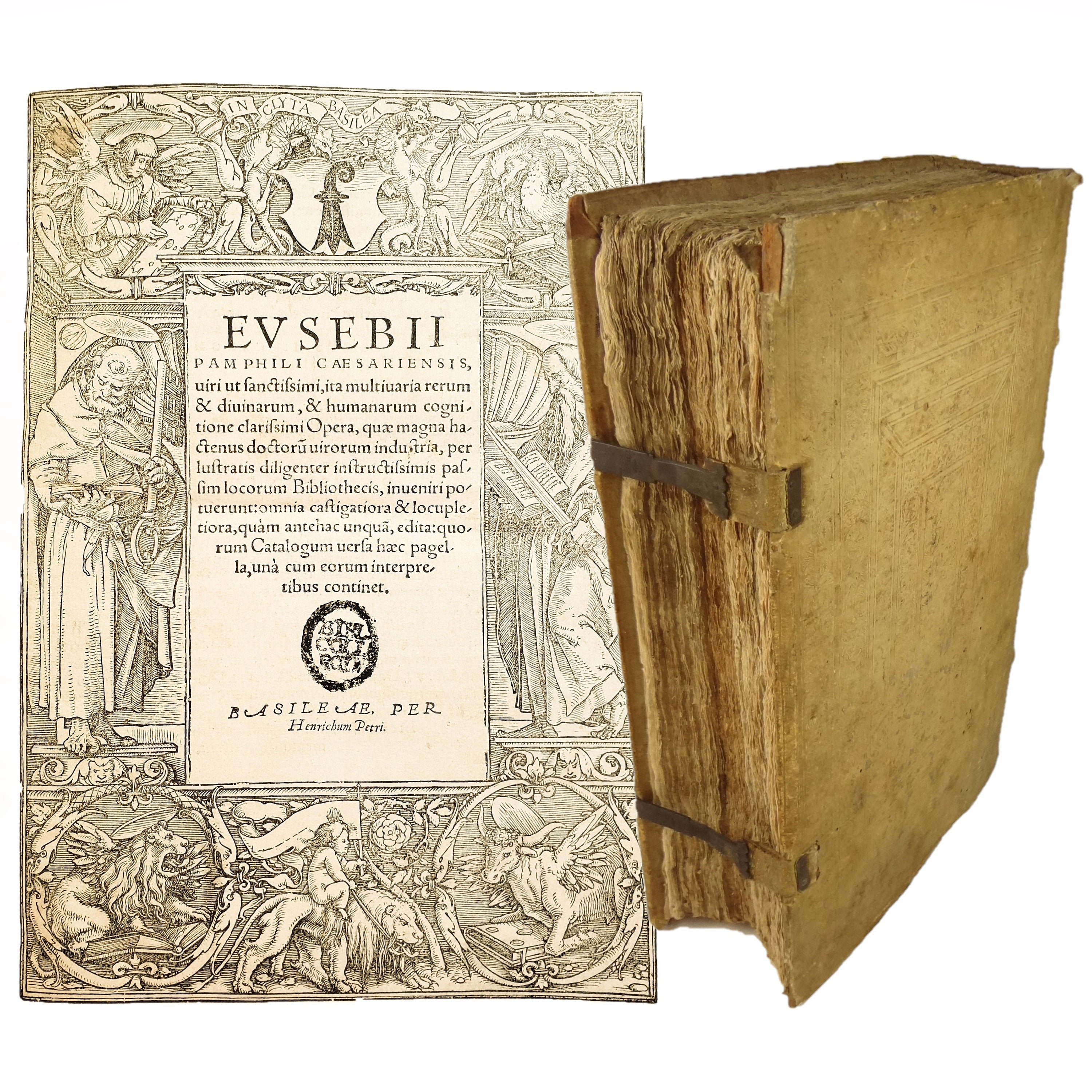 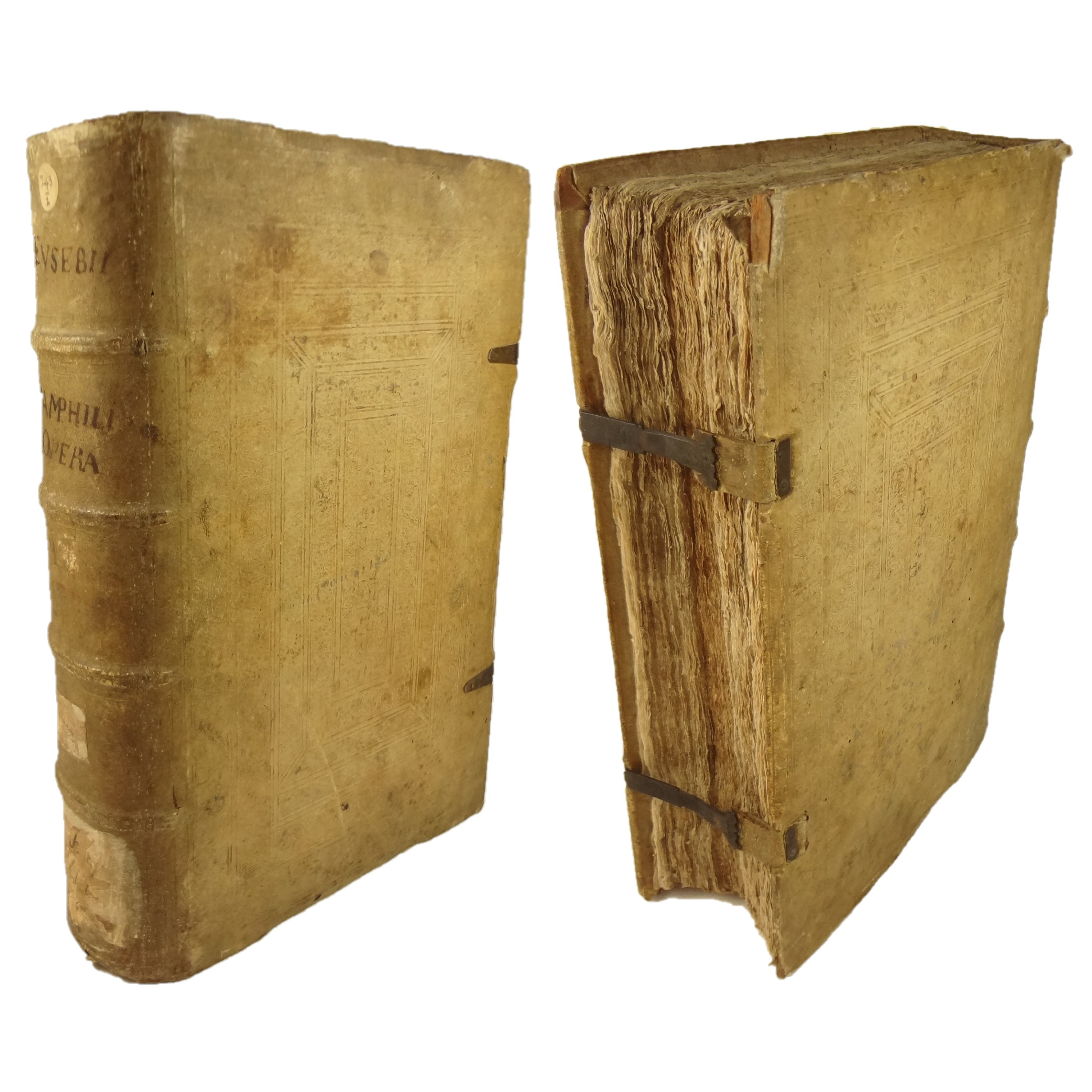 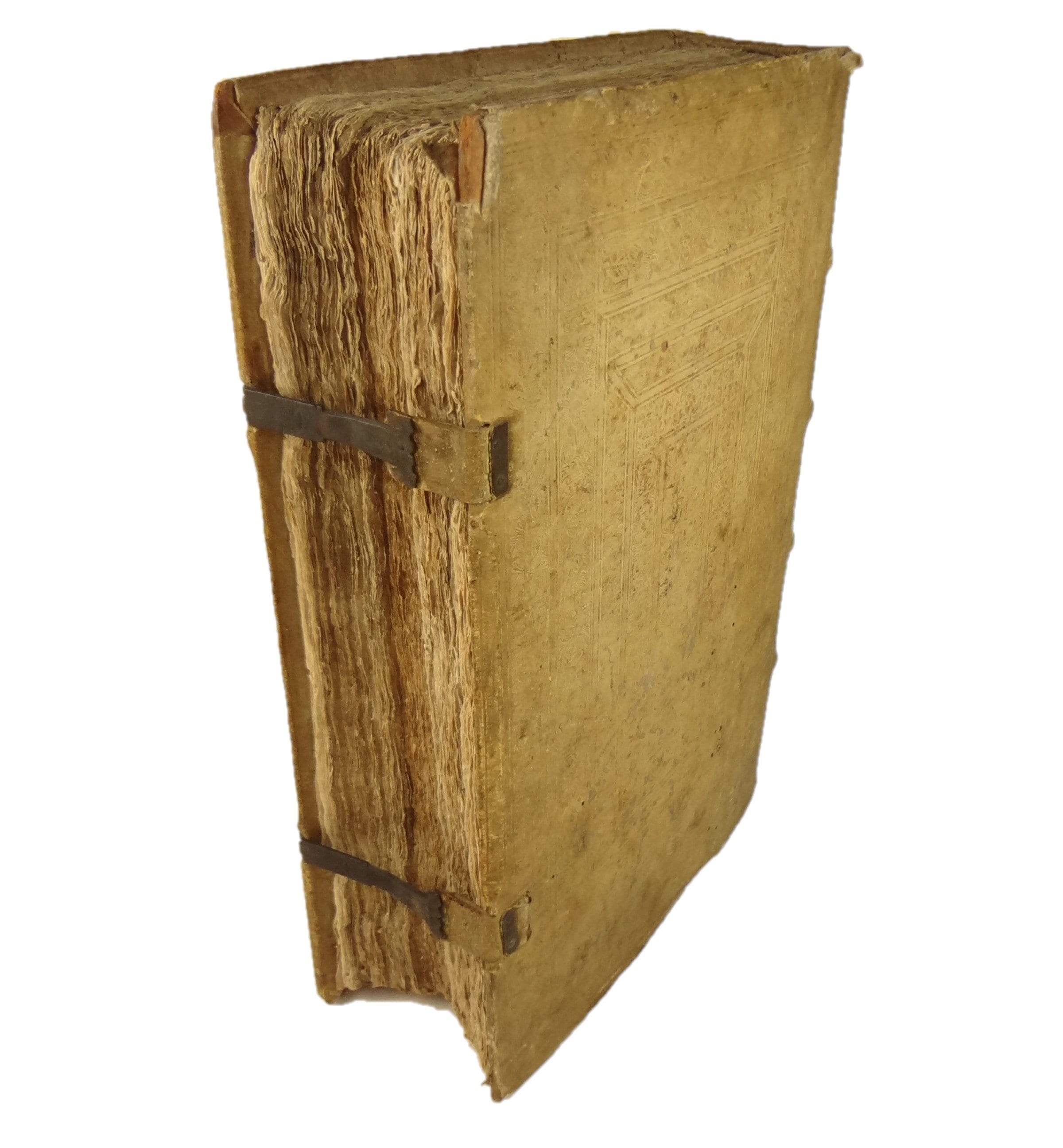 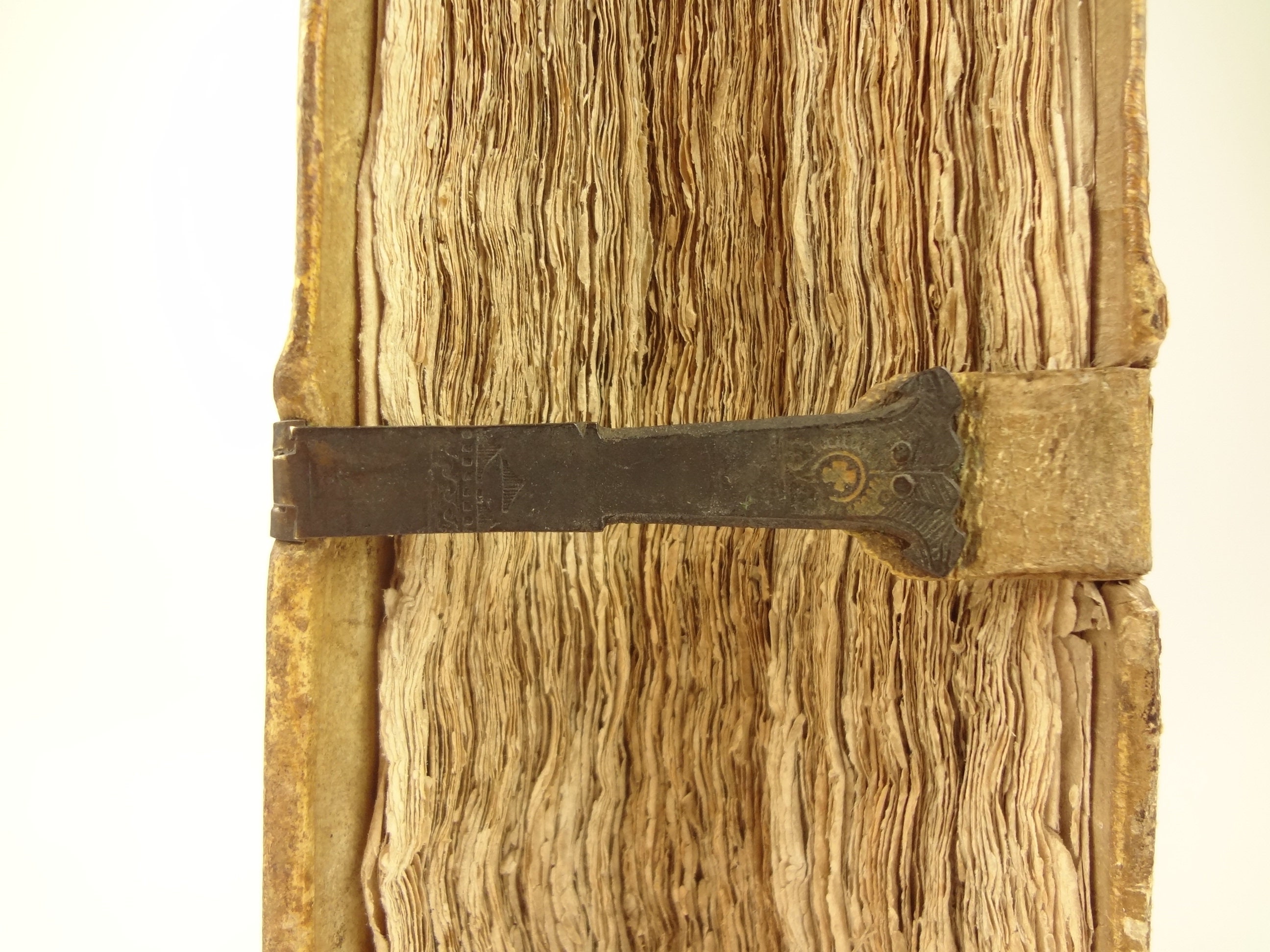 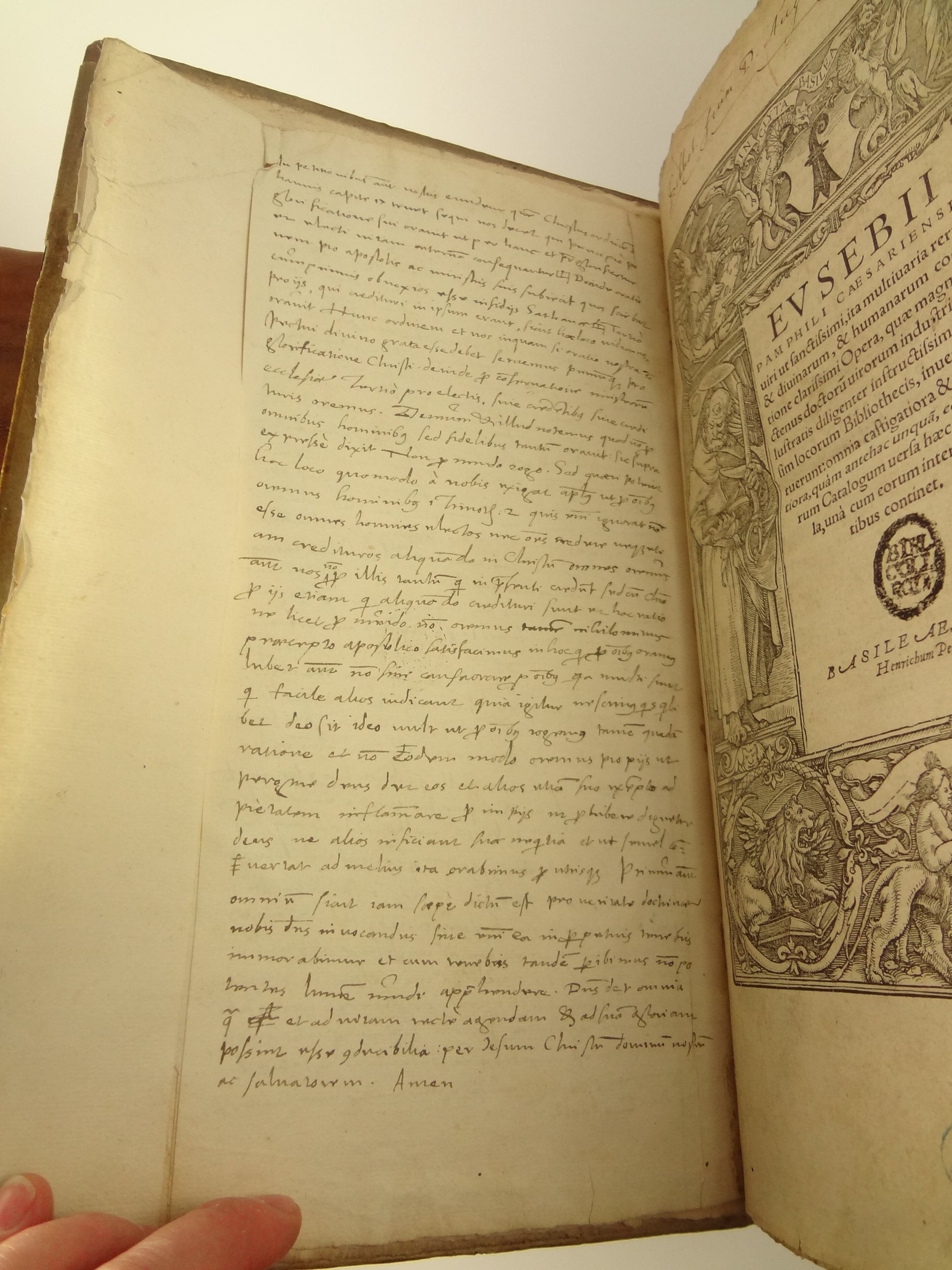 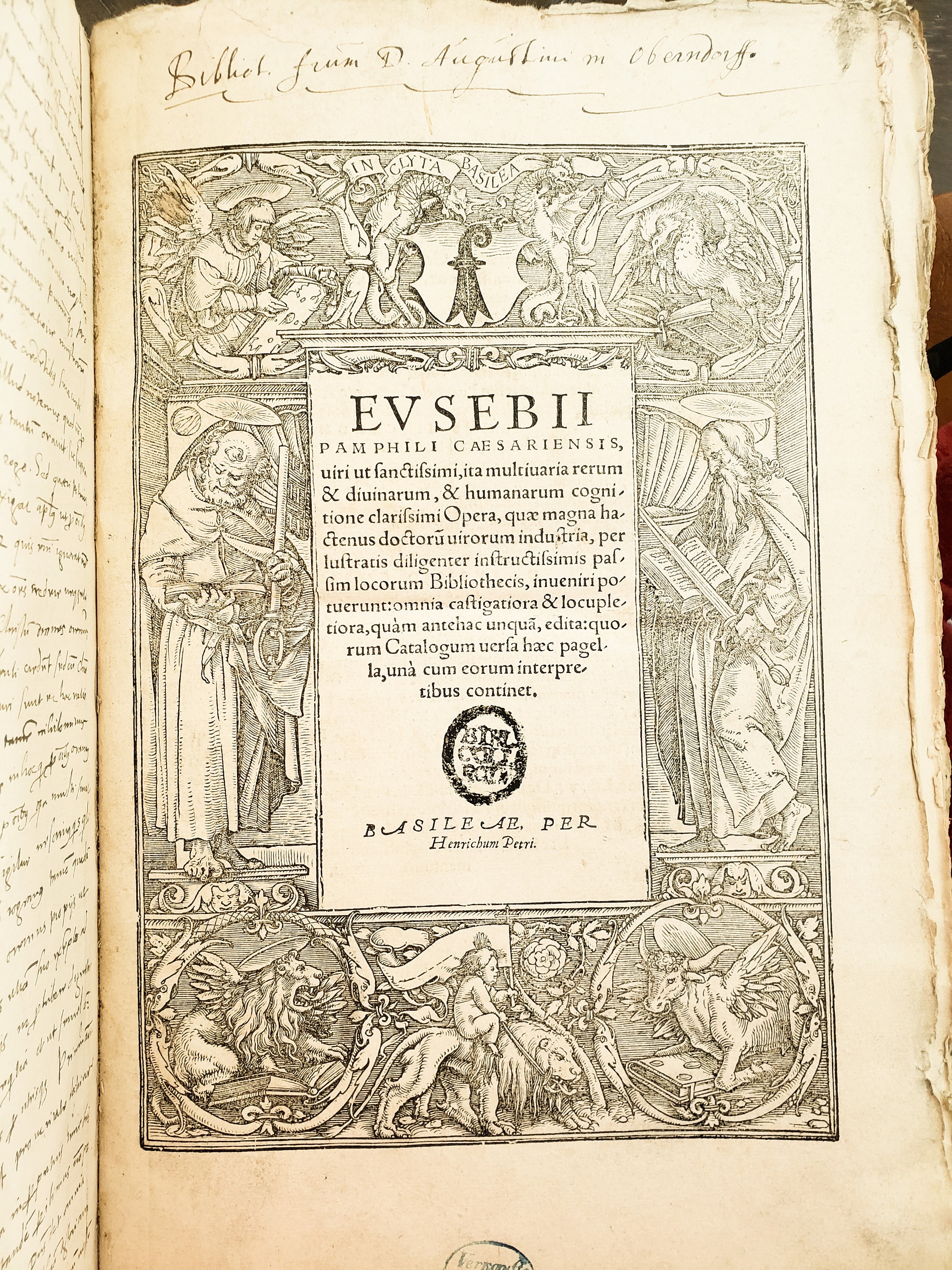 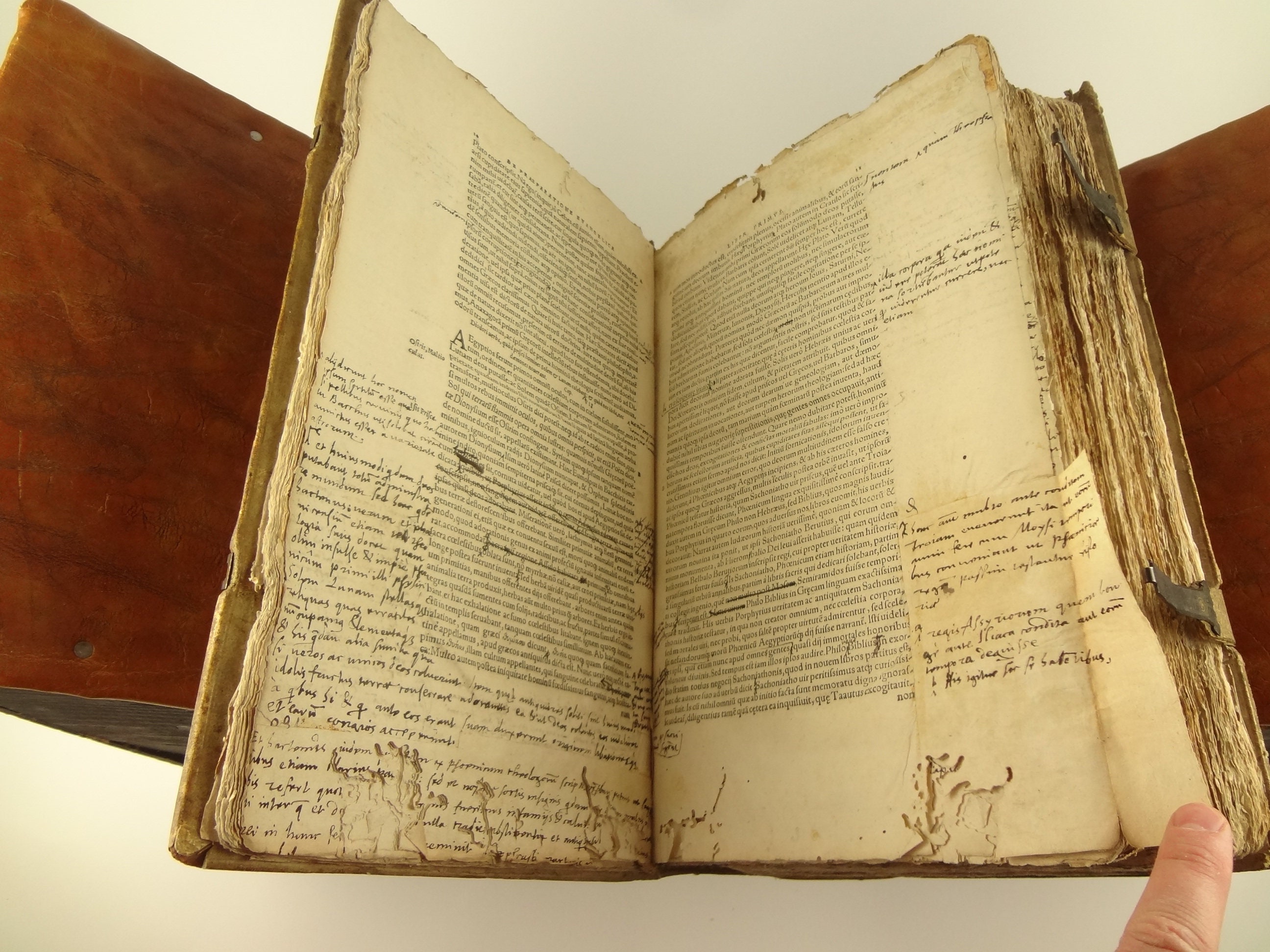 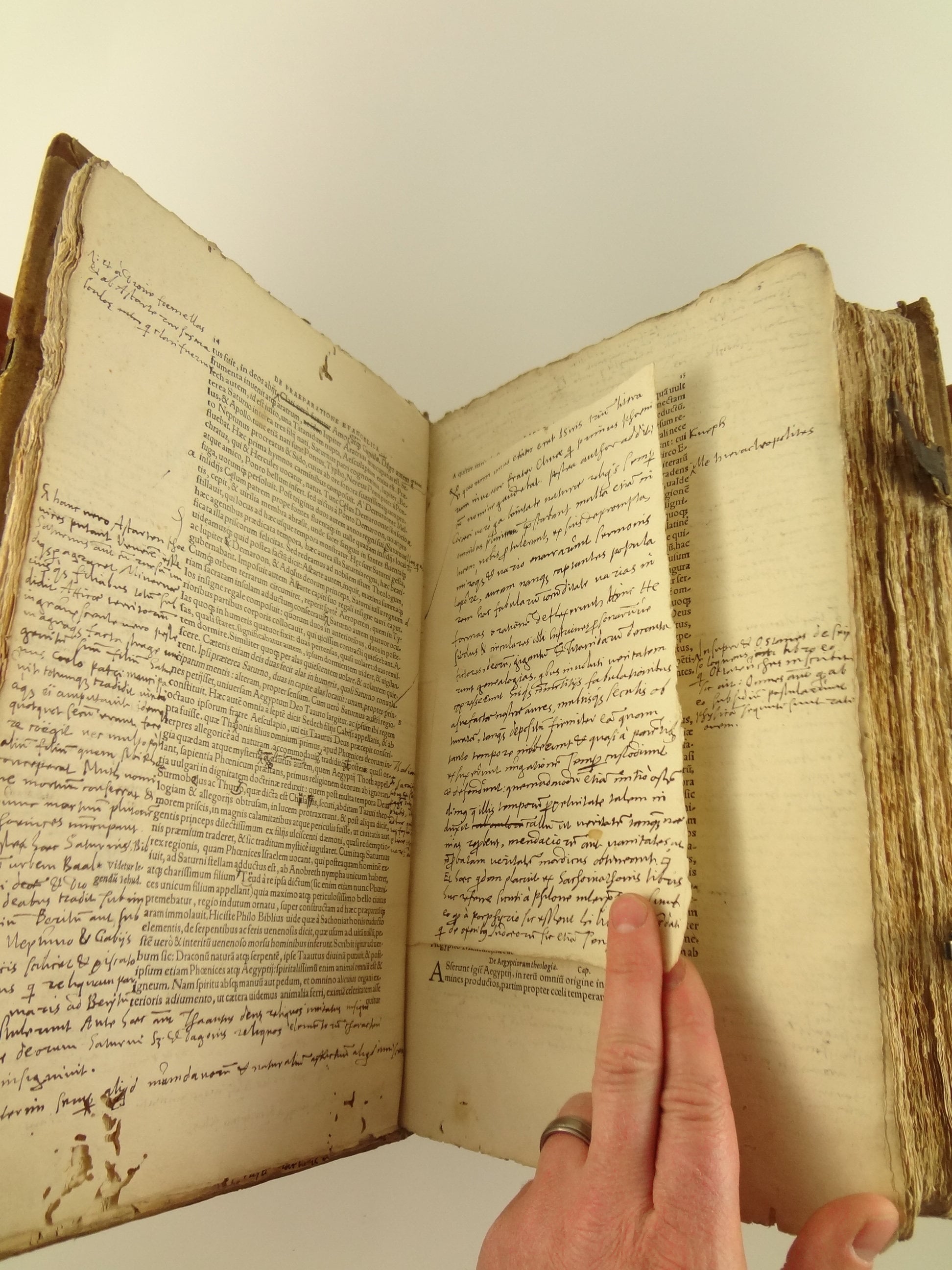 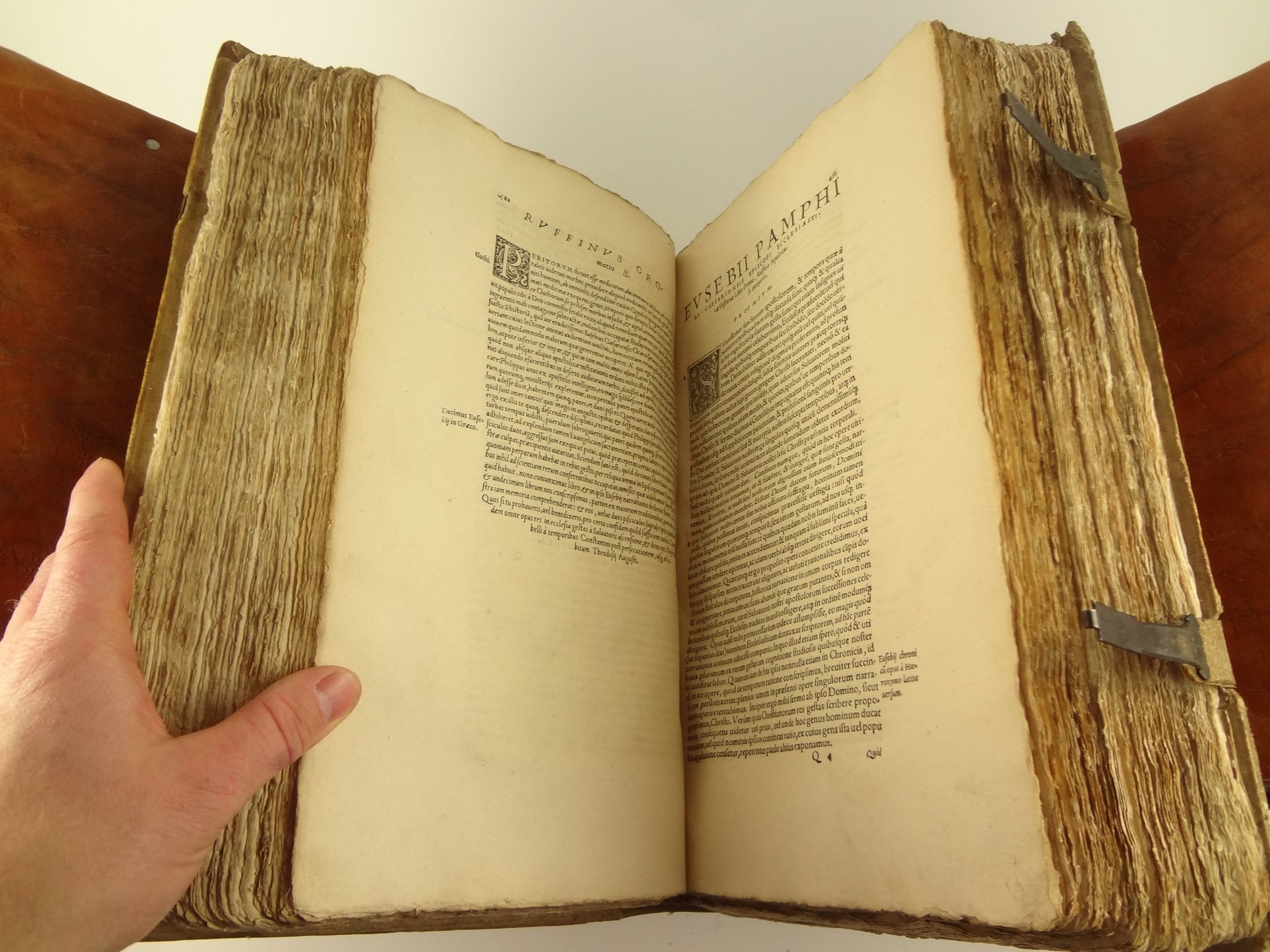 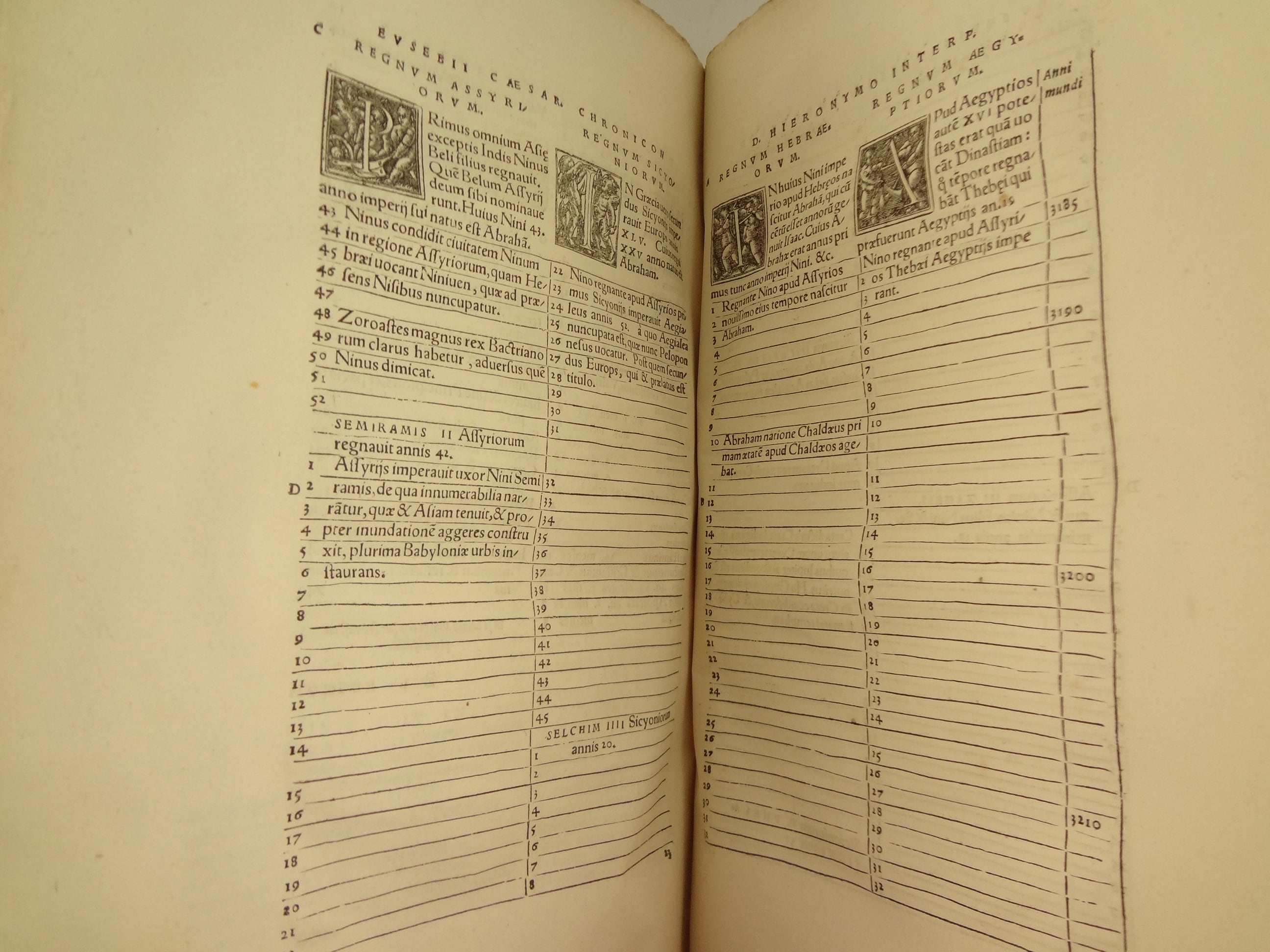 Note, this is just one volume, I edited the photograph to show both sides of the book.

A beautiful copy of Eusebius' works, printed in 1549, with a handsome title page by Hans Holbein the Younger. The binding is likely 16th century, with beveled boards and blind tooled vellum hosting many small saints; the clasps are exceptional with decorative elements tooled into them. The page edges are deckled, indicating the book has not been trimmed for binding; also, the annotations are not trimmed. The annotations to the first three books are among the richest I've seen, to the extent that there are many additional note pages tipped-in.

Regarding the title page, reference The British Museum, which lists the many attributions/citations for Hans Holbein the Younger. Reference number: 1895,0122.851

It seems that Holbein designed the engraving, and the block was cut by Hans Lutzelburger. Adam Petri first used it in 1523, meaning his son re-used it for this work in 1549. Also true of his father's colophon printer's mark of the hammer striking flint, used here again at the colophon.

The many annotations, notes and tipped-in pages are limited to the first three books (to page 56). They are so rich in detail, and dare to strike entire passages, that I can't help but wonder if the annotator had an original manuscript and was attempting to correct Marcus Hopperus' work in producing this edition. The fold out notes are a treat, as are the use of tiny stick figures in lieu of manicules. Notable also are the annotative discussions of ancient lore (Hercules, the Moon, etc.) as Eusebius' third book is a refutation of those pagan gods. I think a Latin scholar would love peruse these notes and trying to discover the intent of the annotator.

"A historian of Christianity, exegete, and Christian polemicist. He became the bishop of Caesarea Maritima about 314 AD. Together with Pamphilus, he was a scholar of the Biblical canon and is regarded as one of the most learned Christians of his time. He wrote Demonstrations of the Gospel, Preparations for the Gospel, and On Discrepancies between the Gospels, studies of the Biblical text. As 'Father of Church History' (not to be confused with the title of Church Father), he produced the Ecclesiastical History, On the Life of Pamphilus, the Chronicle and On the Martyrs. He also produced a biographical work on the first Christian Emperor, Constantine the Great, who ruled between 306 and 337 AD." - Wikipedia

The Augustinian Monastery at Oberndorf is written in ink at the top of the title page (no text affected). This later closed and became the Mauser (gun manufacturer) factory. A stamp indicating that it was a duplicate copy is found at the bottom of the title page, likely why it was sold into private ownership.

Two volumes in one.

See pictures. Notably, the clasps are still functional, and the margins are wide; still in its 16th century state. Some wear to binding, with rubbing, a few small scrapes, edge wear, corner wear, etc.. Various library markings and stickers on spine.

Mounted note pages throughout, to page 56; second page of mounted notes has cut along most of fore-edge, manuscript not affected. Ex-libris stamps here and there, and "doublette" (double) stamp on title page. Toning, thumbing, fox spots on occasion throughout, light; paper in good condition, not brittle. 4" tear bottom corner of page 33. Heavily annotated through 1st three books (to page 56), as though someone had the intention to update the books, with notes mounted in as well. The mounted additions are sometimes torn, and one example is loose from where it was mounted. Then, for the rest of the book, almost no annotations (letter correction in margin of 497). Chipping to last several page edges. Several wormholes and a water mark at rear bottom gutter, last forty leaves; just barely touches bottom of text on several leaves. More note pages (2), mounted at rear of book, upside down.