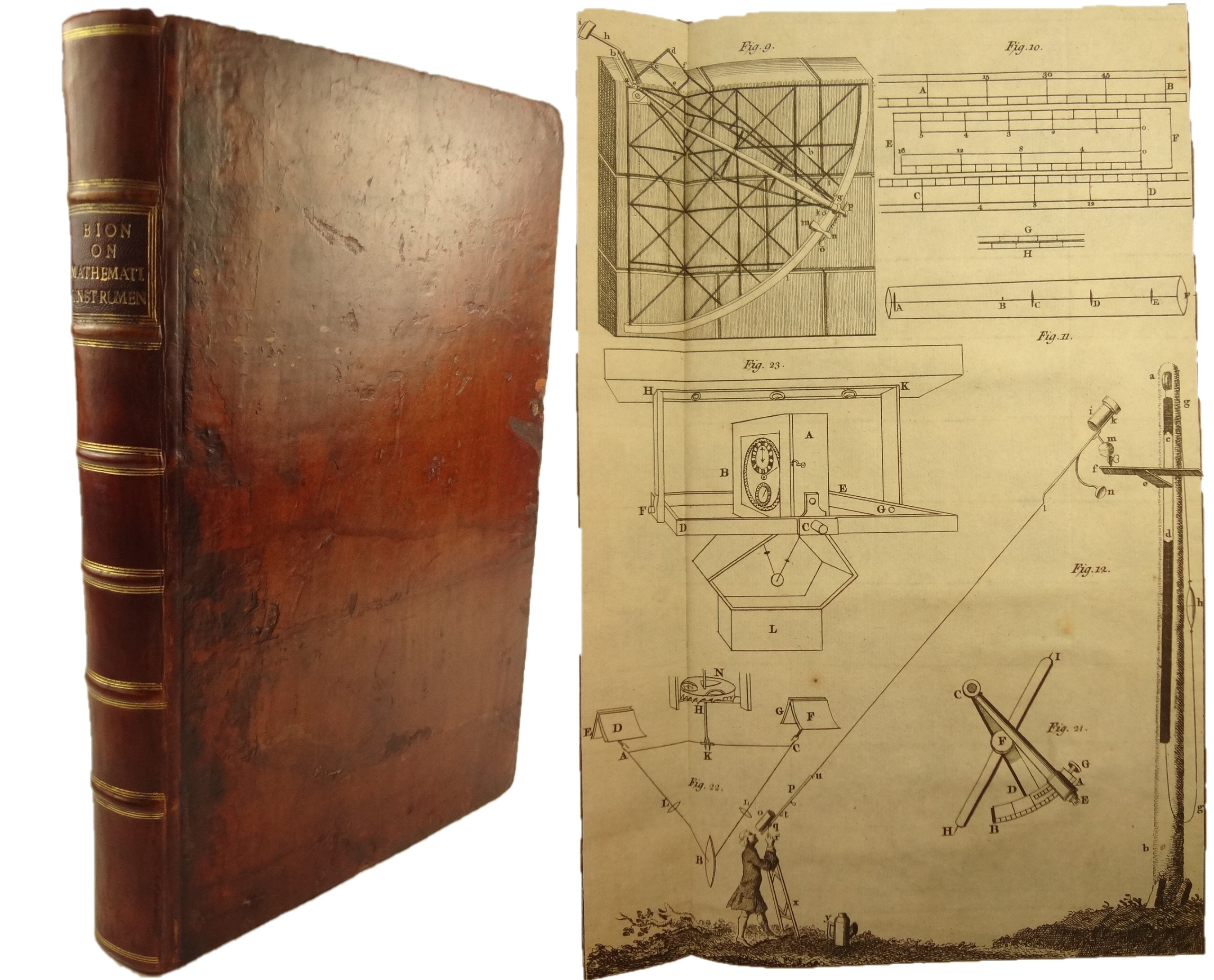 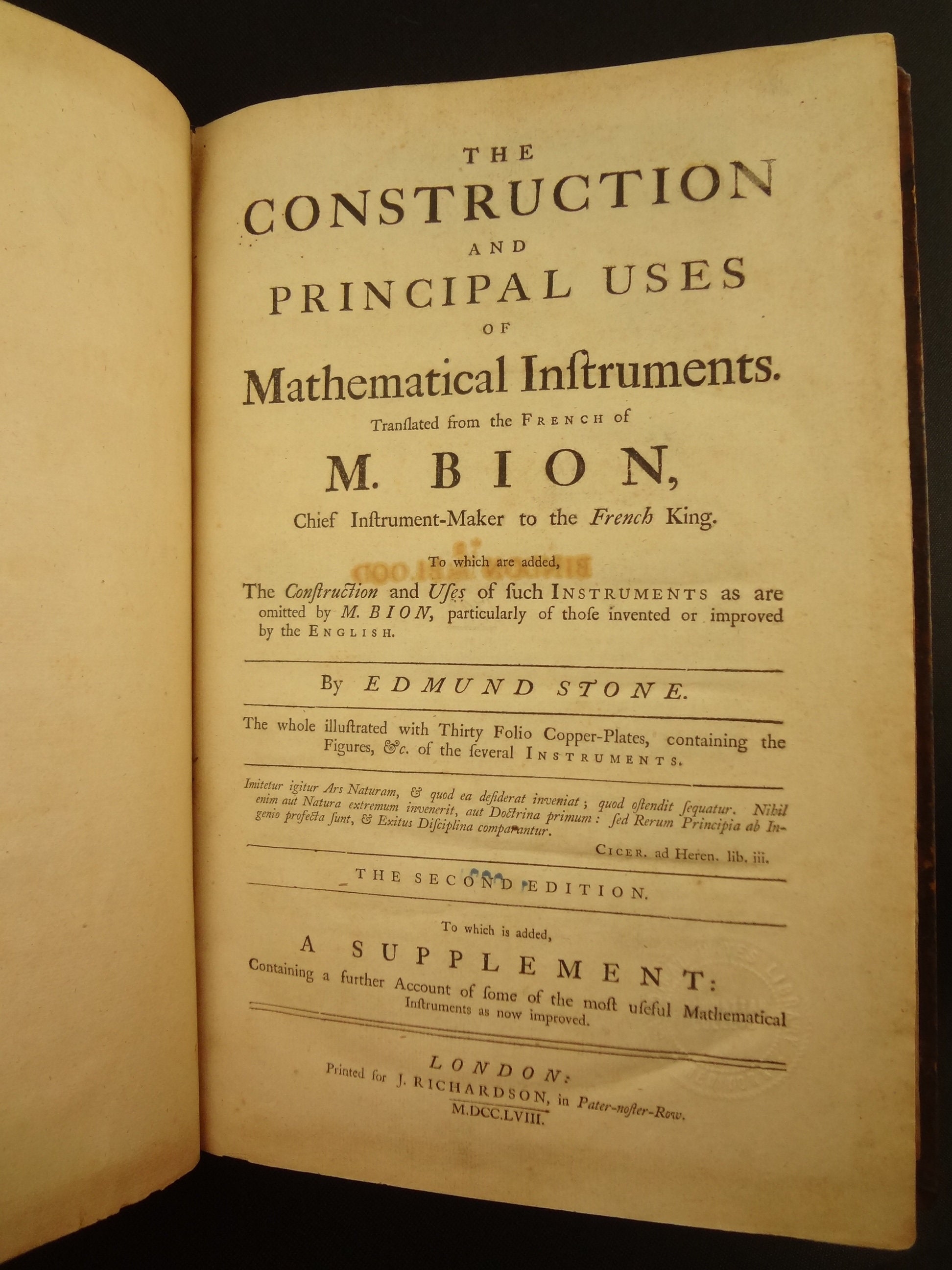 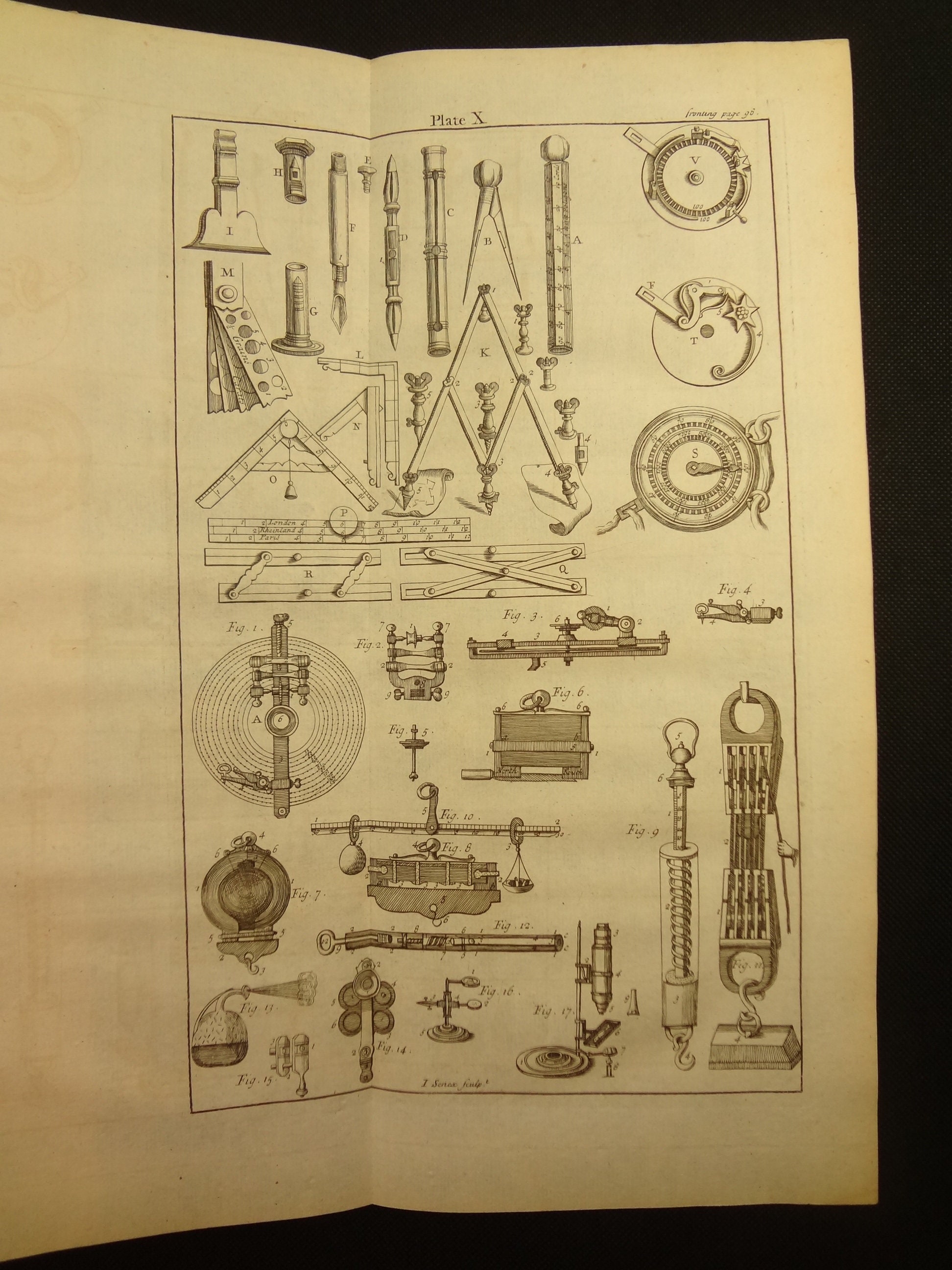 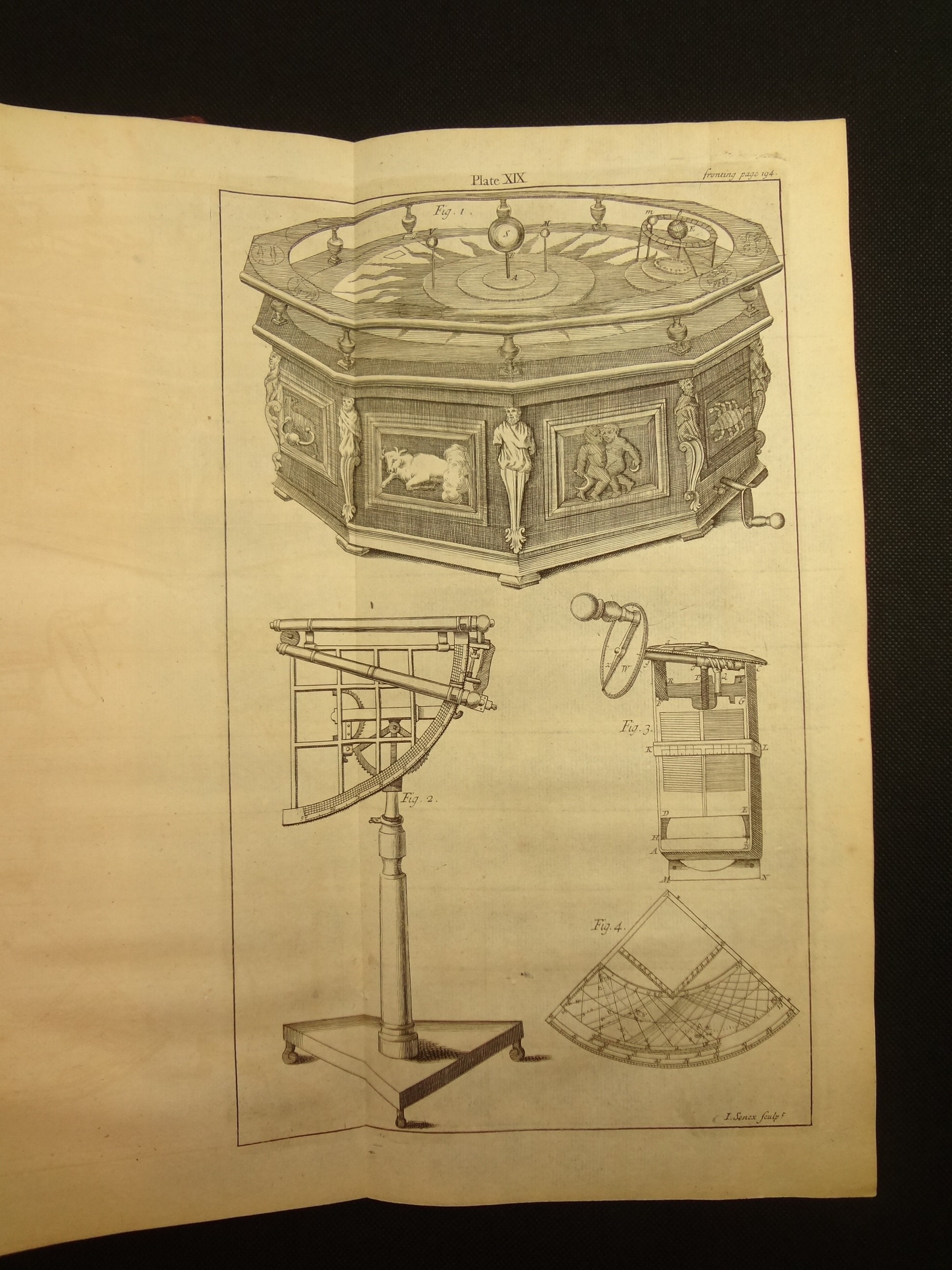 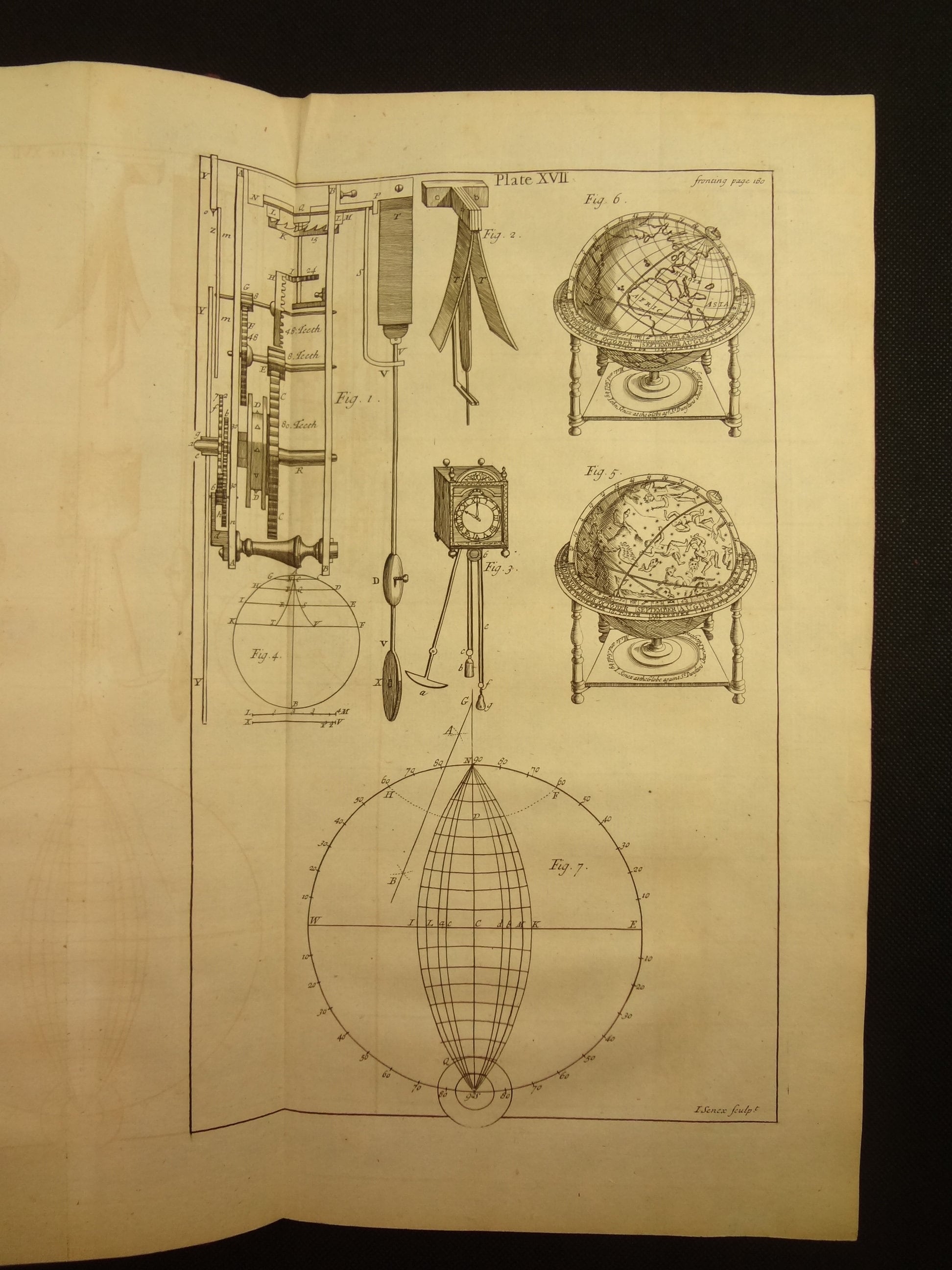 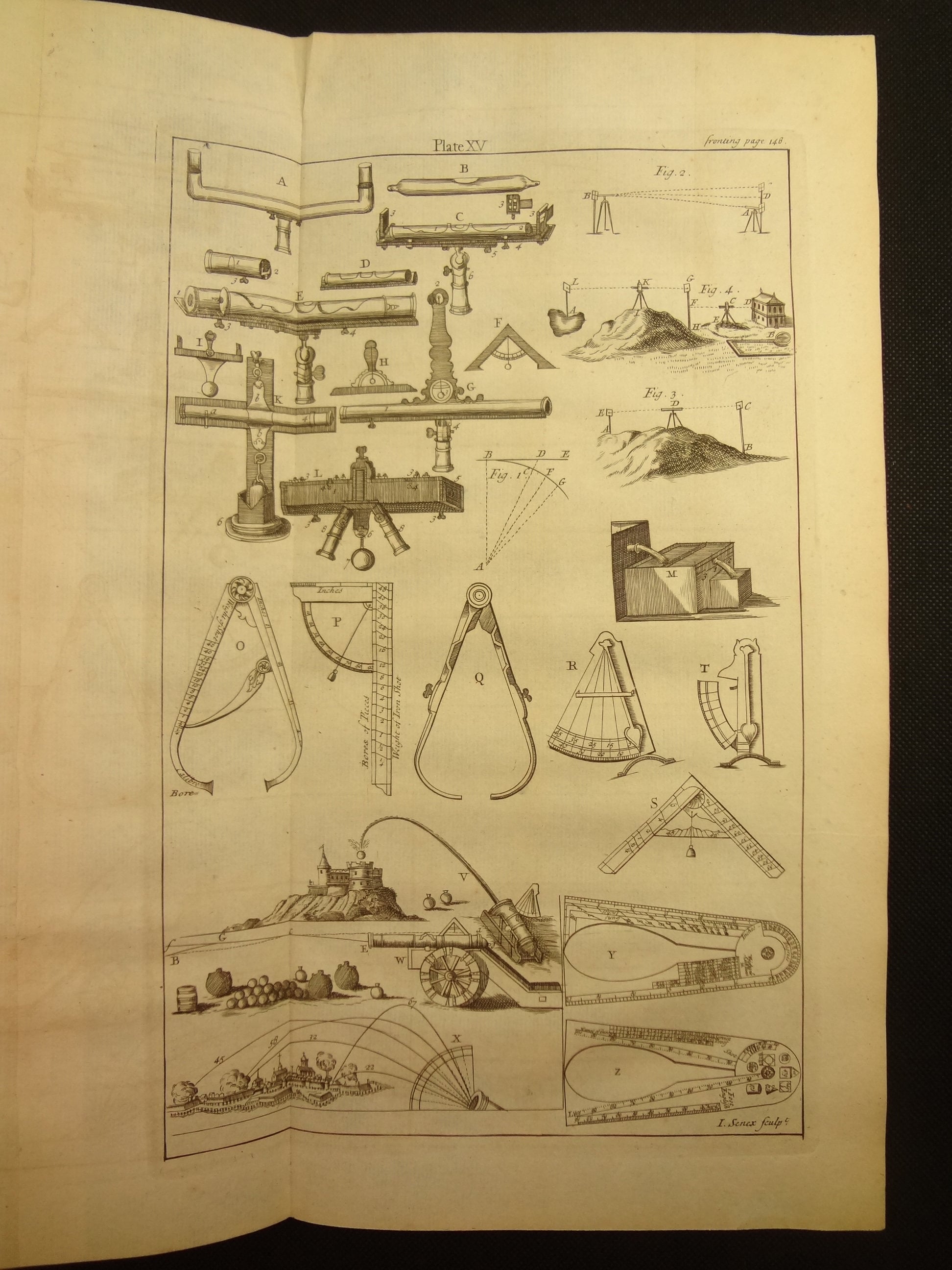 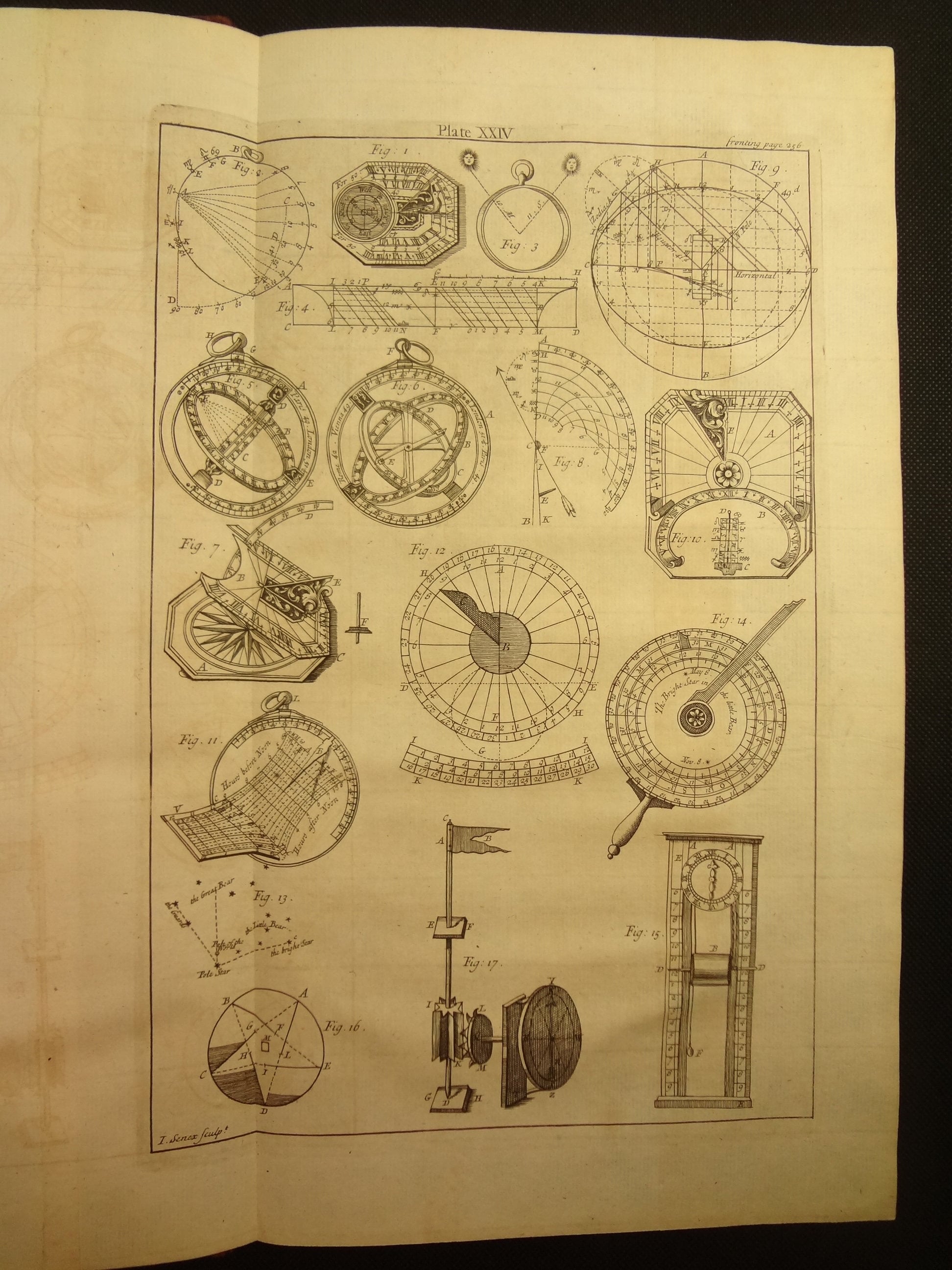 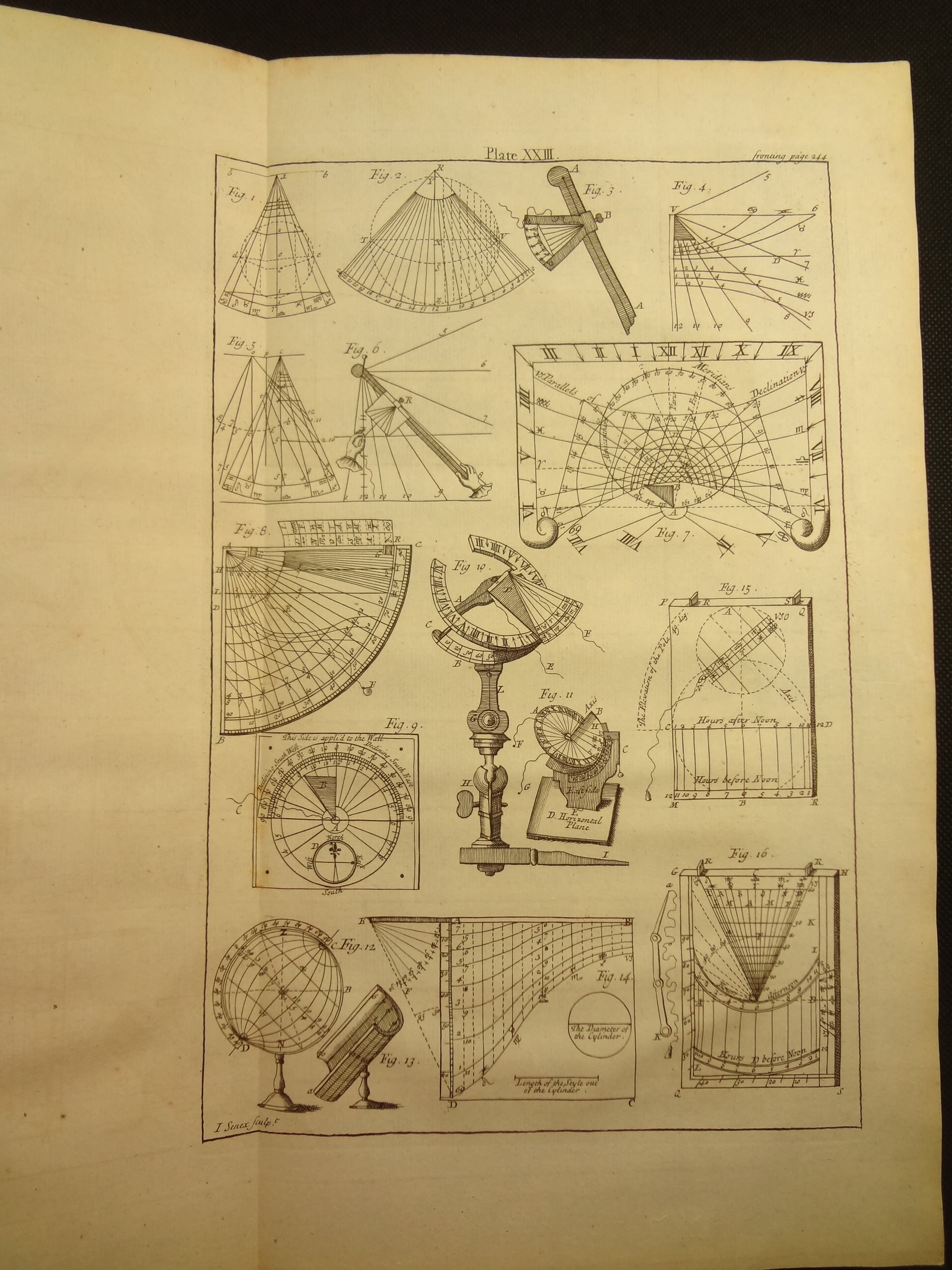 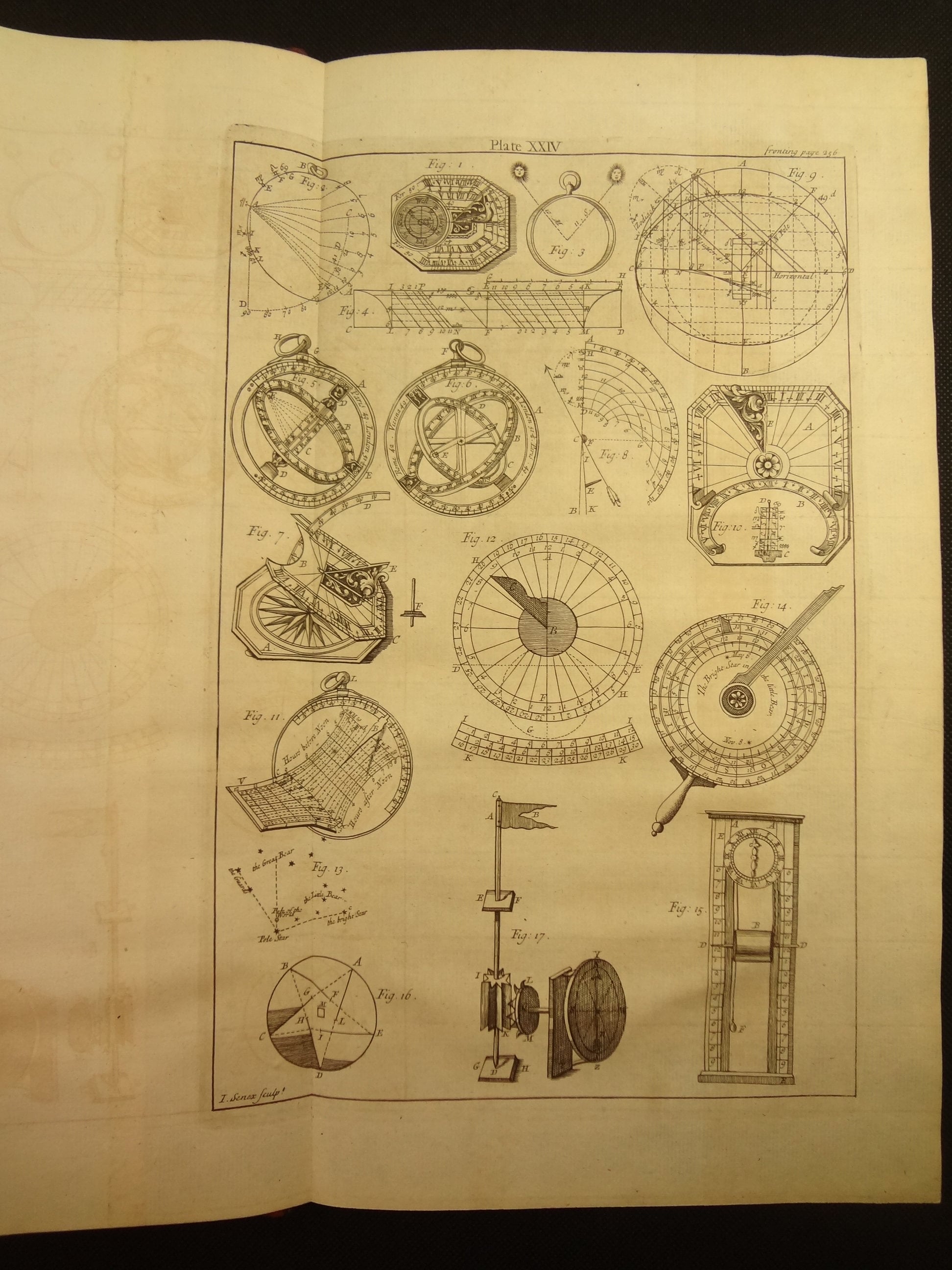 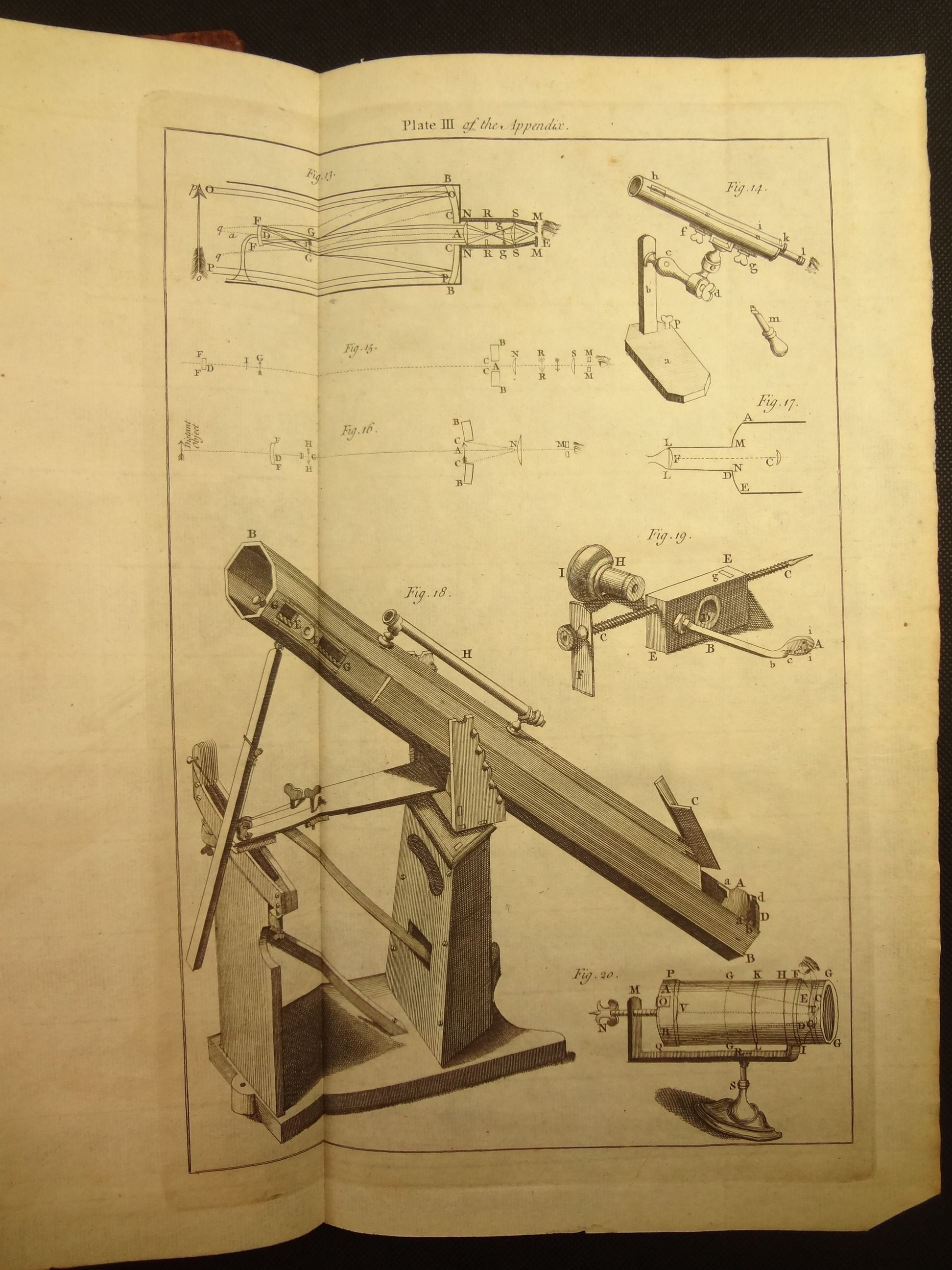 1758 The Construction and Principal Uses of Mathematical Instruments, by M. Bion, translated into English by Edmund Stone

Details from the Erwin Tomash Library -

Edmund Stone, the translator of this work, was the son of a gardener to the Scottish Duke of Argyle. At the age of 8, another servant taught him to read. Shortly thereafter he noticed an architect working on the duke’s house, using instruments and making calculations. Inquiring about these, he learned of the existence of arithmetic and geometry and purchased a book on the subject. When Stone was 18 and a gardener on the estate, the duke saw a copy of Newton’s Principia in the grass. Assuming it was from his library, the duke called a servant to return it and was very surprised when the young gardener intervened, claiming it was his own. The duke became his patron (this translation is dedicated to him) and provided him with employment that allowed time for Stone to study. Stone became a Fellow of the Royal Society in 1725. The patronage continued until the duke’s death in 1743. Thereafter, Stone lost his employment and was reduced to poverty (he had to resign his membership in the Royal Society because he could not afford to pay the dues) and eventually died a pauper.


According to the translator’s preface (see the illustrations), Stone had wanted to produce a work on instruments and decided that Bion’s provided the best model available. Rather than writing one himself, he decided to translate the French work and add to it those English instruments that Bion had overlooked. An example of such an addition—the inclusion of the English gunner’s calipers. Stone also added, as an example of the power of the instruments, a short section on The Use of the Sector in determining eclipses. This work is translated from the second (1716) edition of Bion and includes the additional chapters on fortification and the pendulum clock from that edition.

Stone, as he indicates in the advertisement to the supplement to this addition, was prevailed upon by the publishers to produce a second printing of the 1723 edition, enlarged by the addition of material on a number of new and improved instruments. While this is undoubtedly true, by this date Stone had lost his patron and being forced to live on his own resources must have contributed to his decision to produce the supplementary material. Hence the allusion to several motives in his explanation.

"Bindon Blood", a late 18th century political figure (and antiquarian) stamped his name at the rear of the title page. Bindon acquired the nickname 'The Vampire' because of his habit of out-bidding other antiquarians for the sole sake of hoarding and withholding rare books (information provided online by Bob Blood at genealogical site).

This copy also resided in the Erwin Tomash Library, which focused on the History of Computing (many of the books were sold on at his passing).

30 engraved plates, as called for on title page.

See pictures. Vintage patina, with the pleasing look of history. Respined, but it looks like they used the original label. Boards with rubs, edge wear, chips, etc..Retains original endbands. Remnants of bookplate on pastedown, and ticket "Erwin Tomash". Turn-ins have ghosted pastedown and flyleaf.

2 cm tear at bottom of blank 1st leaf. Stamp of "Bindon Blood" and a library number have bled through from rear of title page, and there's an impressed stamp of Cardinal Hayes Library at bottom.

Some toning throughout volume, with an occasional fox/rust spot. Occasional page edge chip and tear. Note from "1941" on first plate, not over printed material. "Fig. 17" written in margin of 8. Impression and stamp again on 27. Chip at fore-edge of Plate 7, no printed material affected. Damp stain at bottom-edge/corner just barely intruding into book, no text affected. 1 cm hole in middle of 283/284.

Very handsome book, with the pleasing patina of time, and wonderful to peruse with it's excellent illustrations.