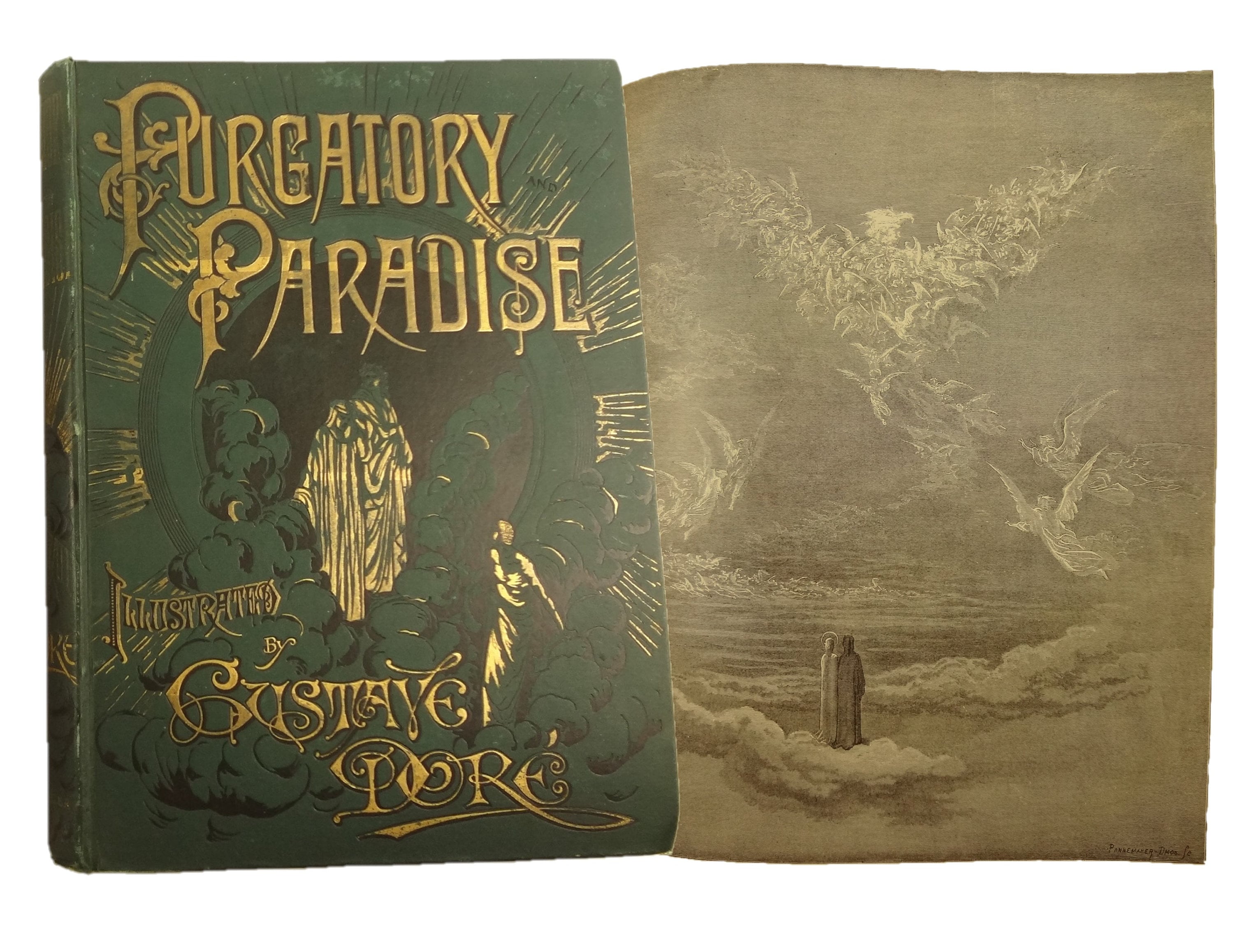 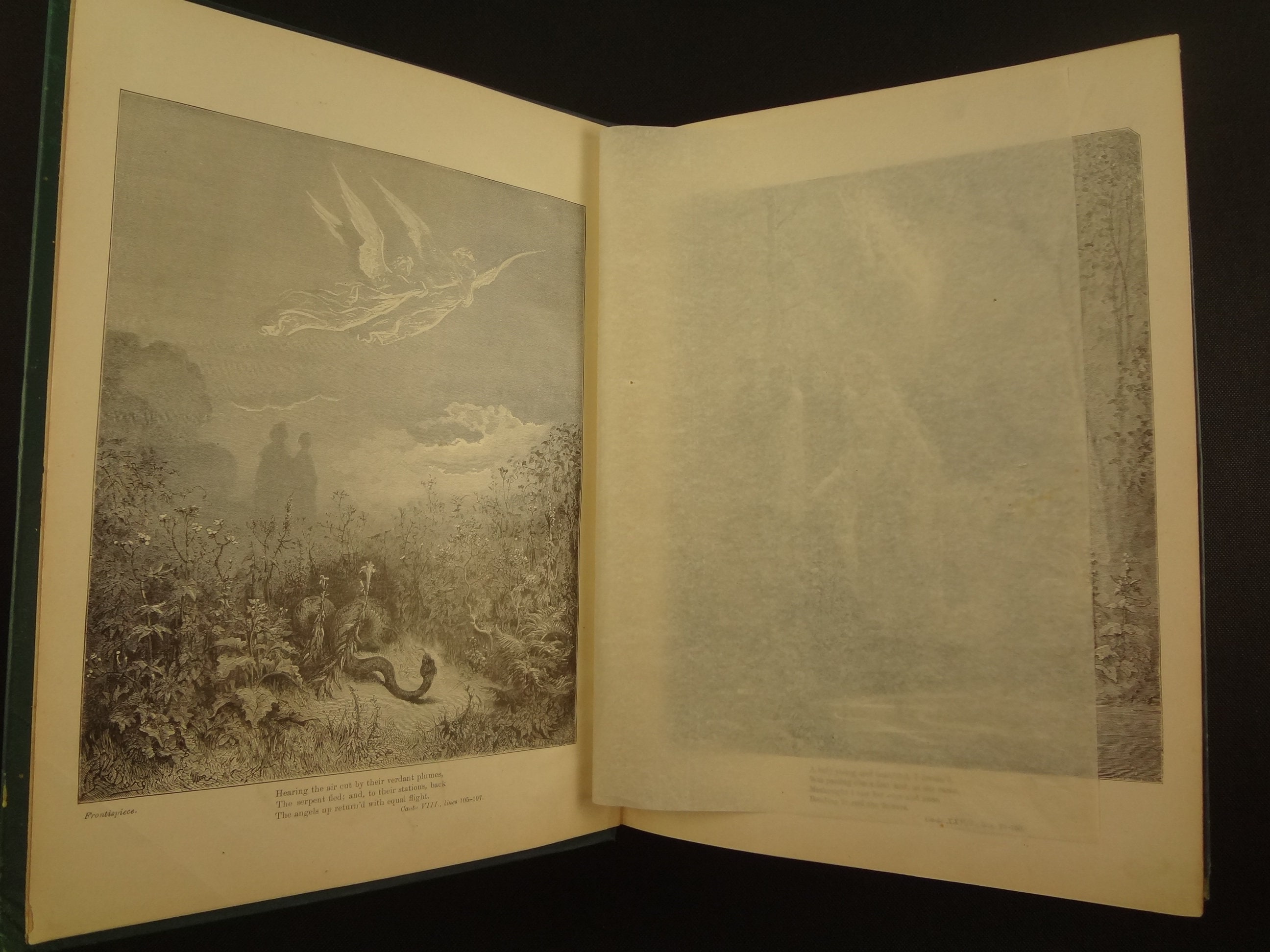 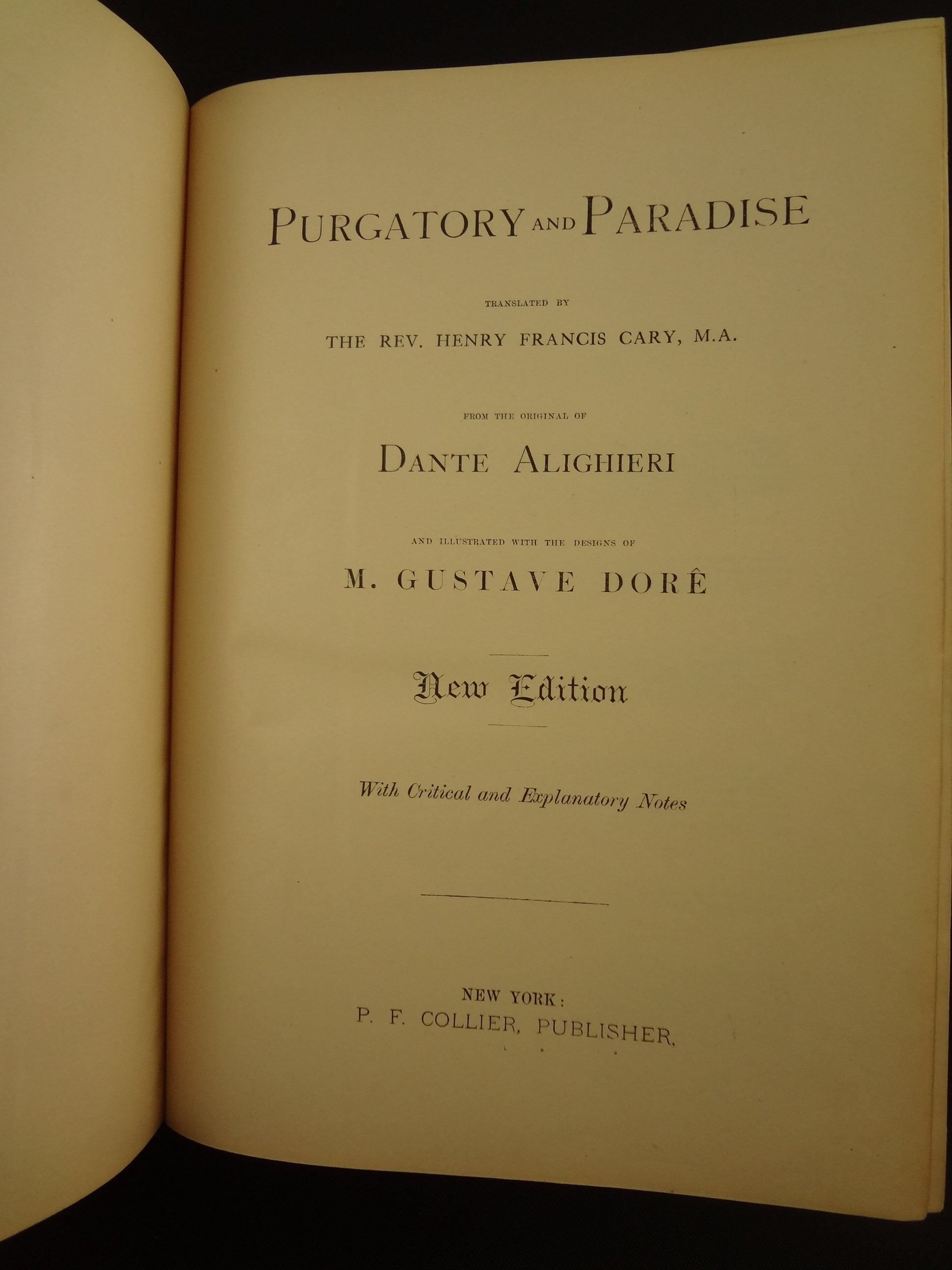 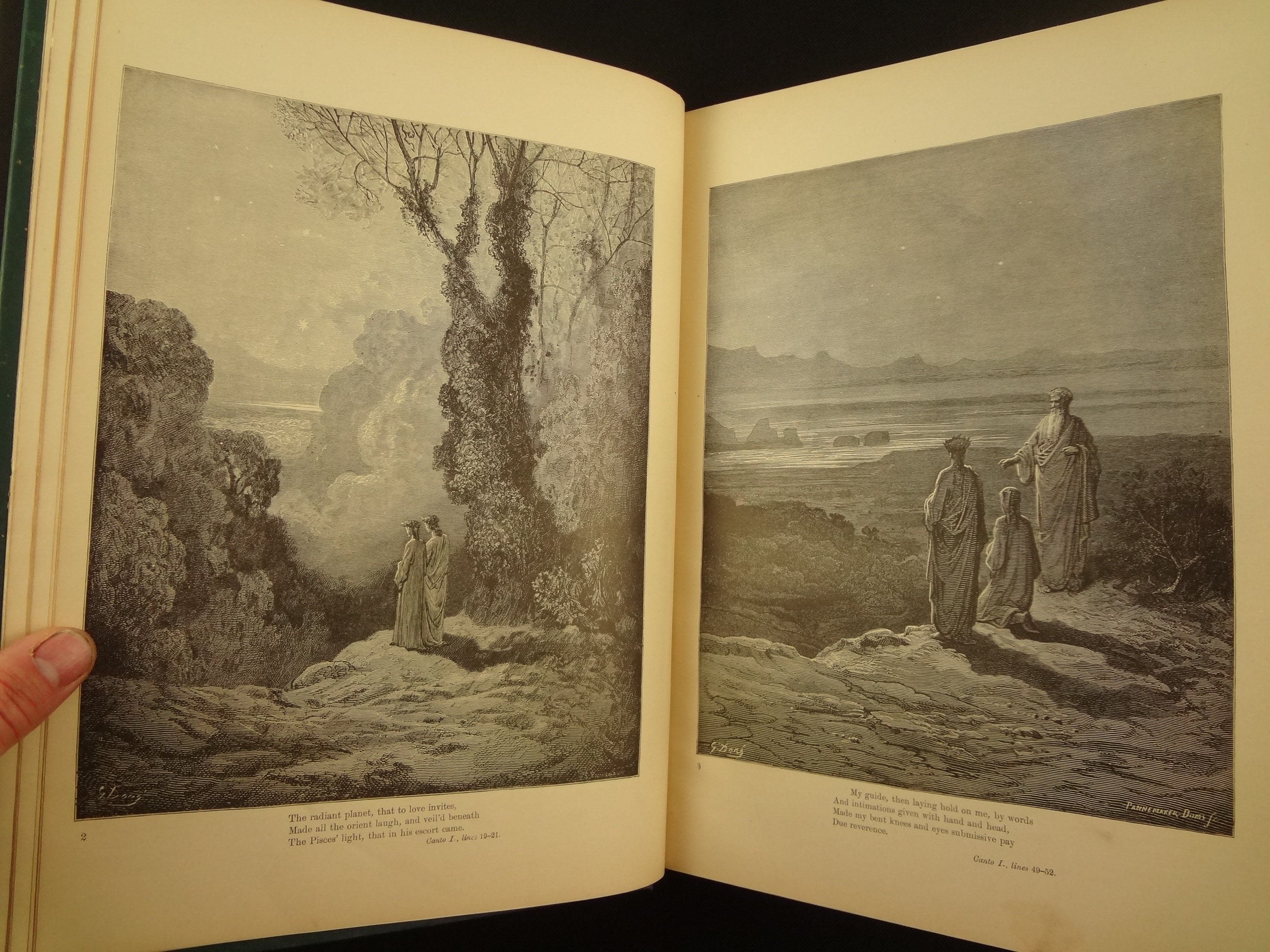 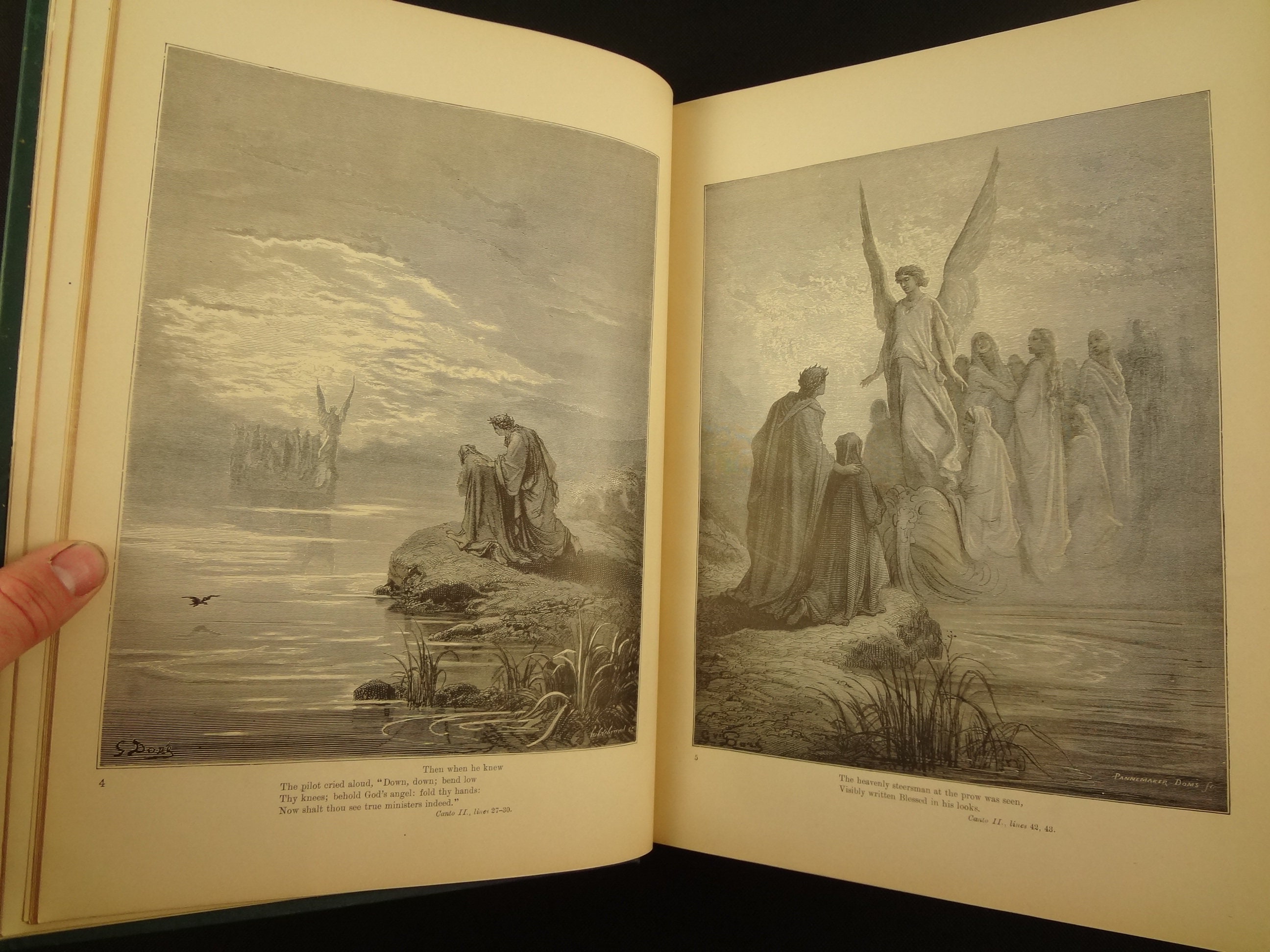 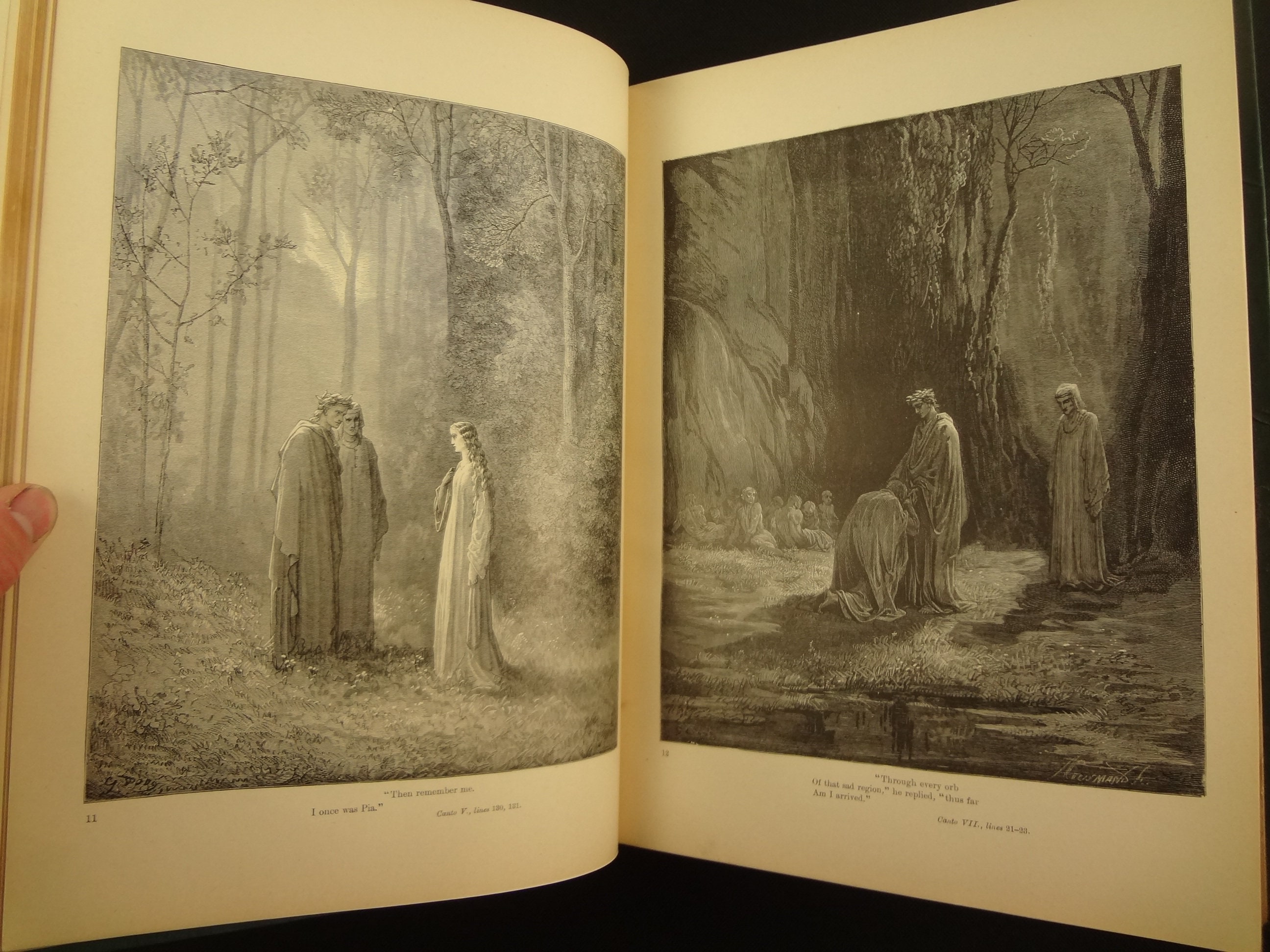 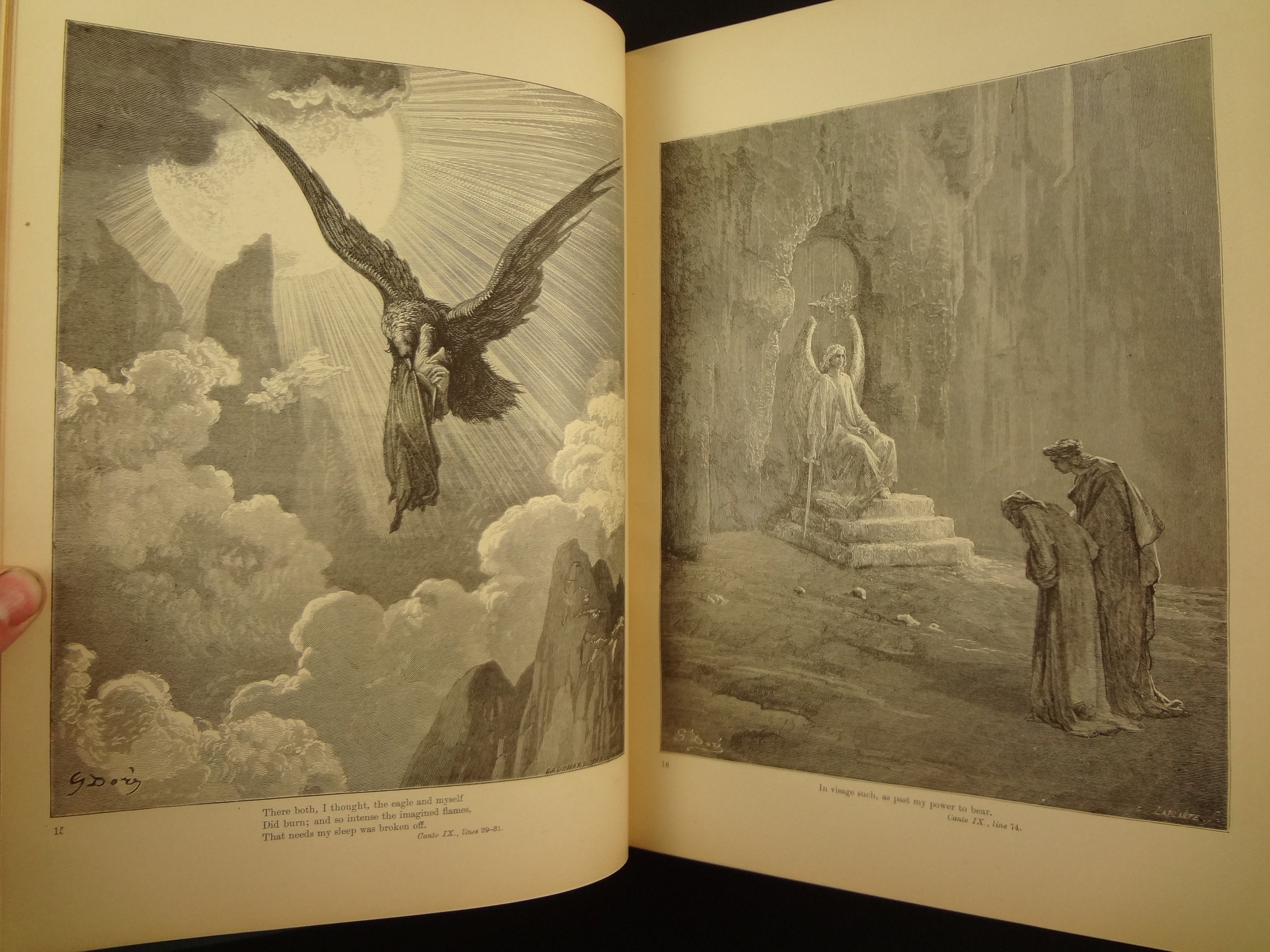 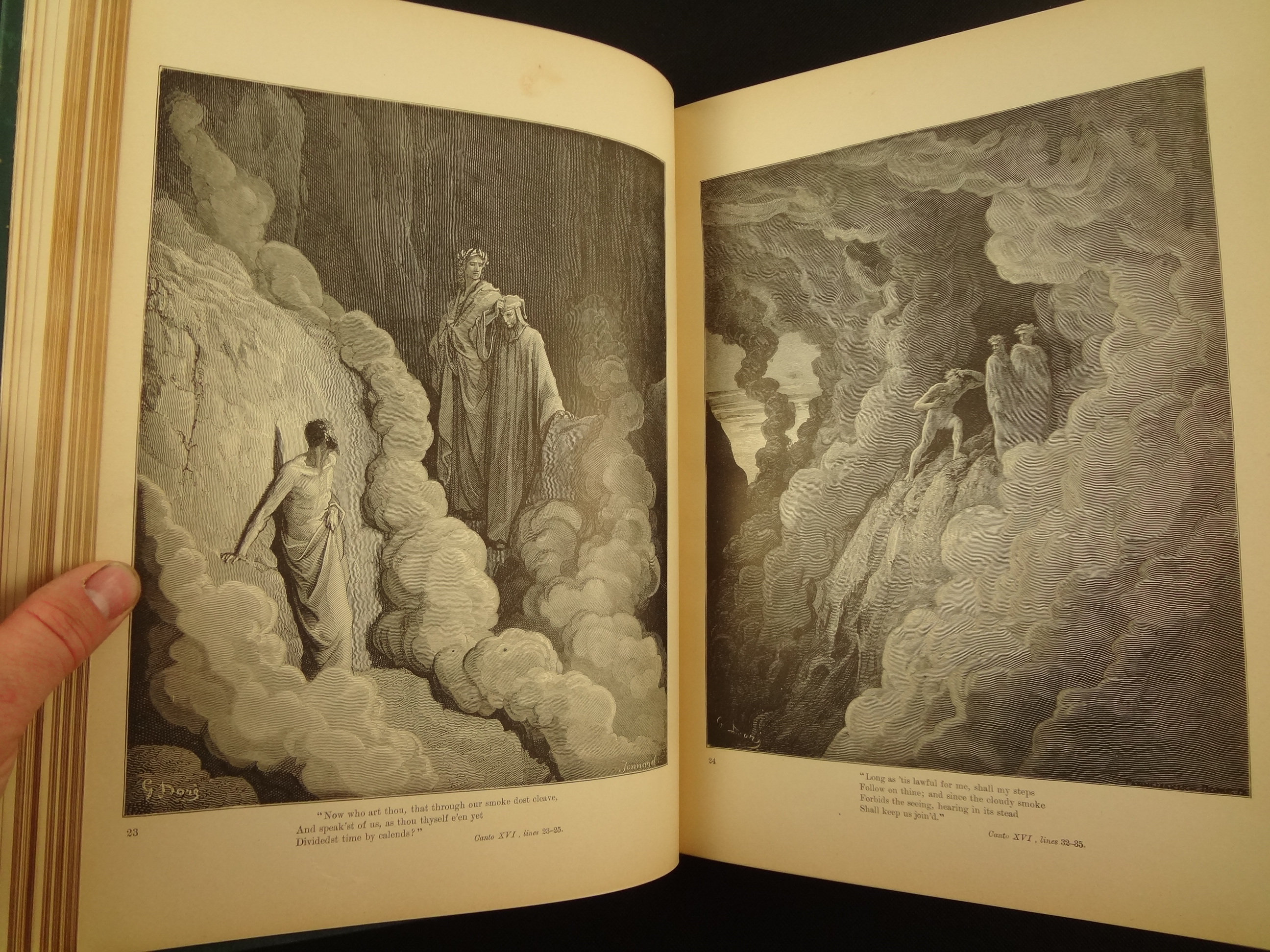 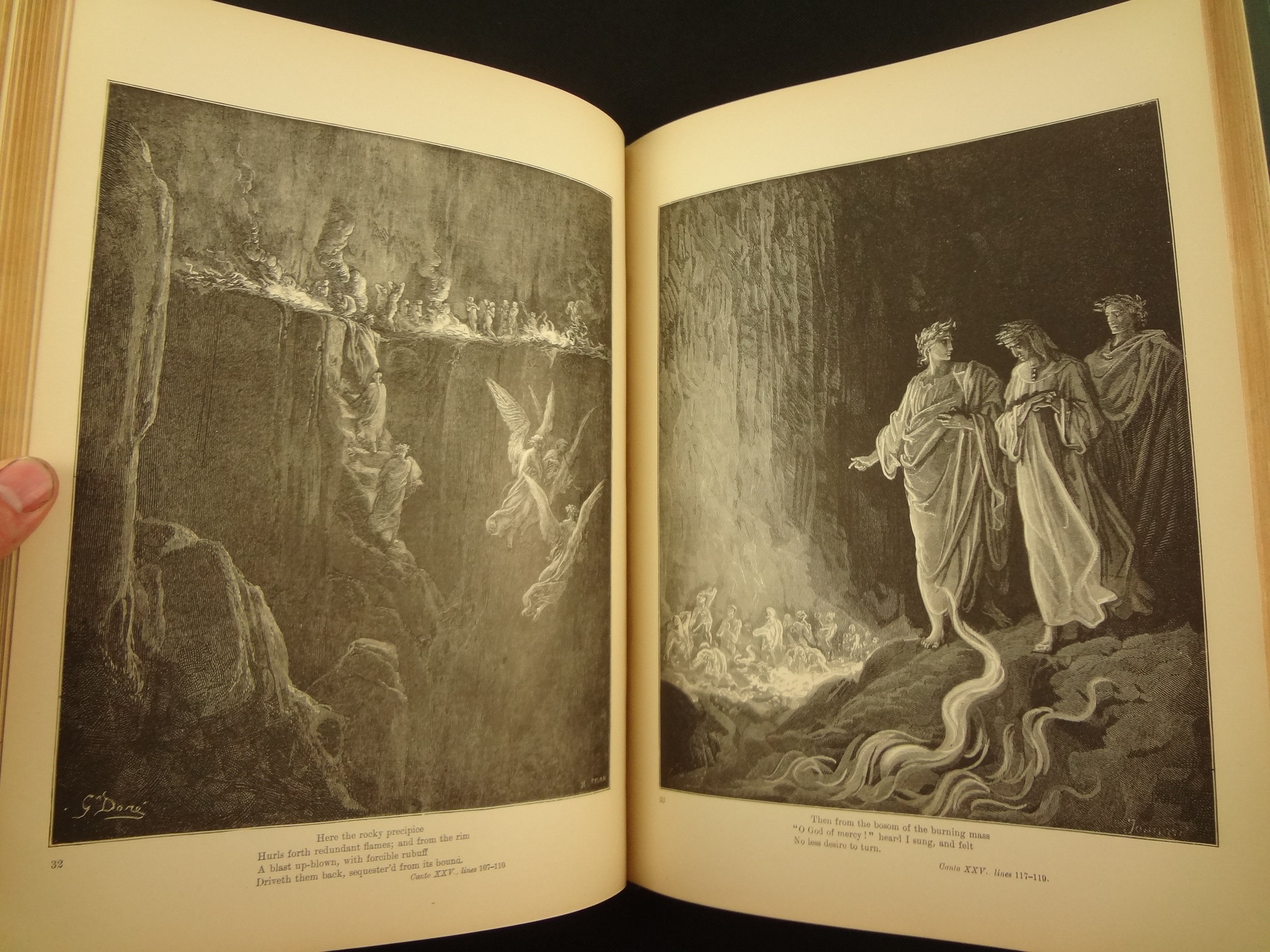 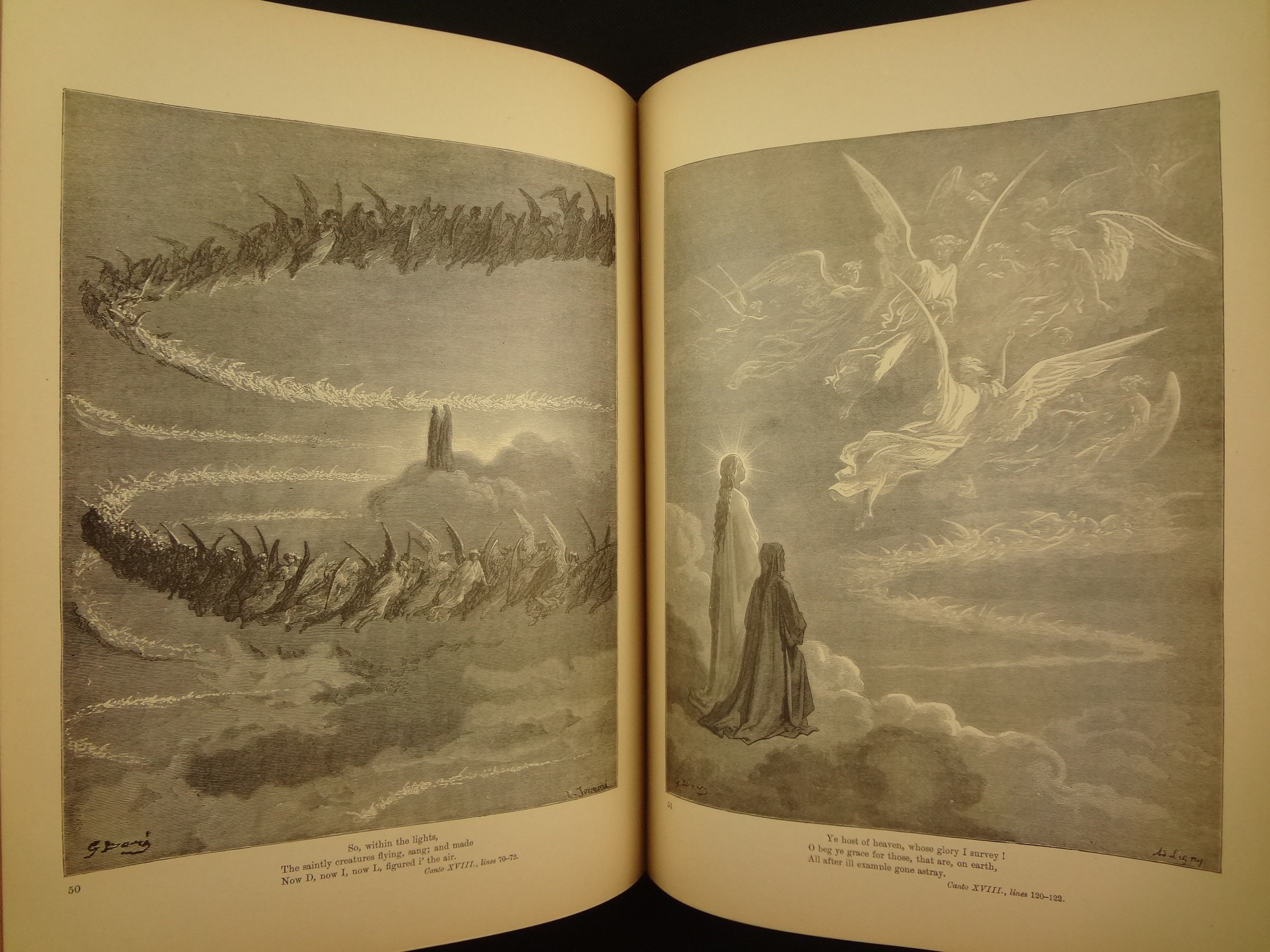 The Gustave Dore illustrated, folio edition of Dante's Purgatory and Paradise, printed by Collier and housed in one of their delightful publisher's bindings with gilt decoration. Dore provides sixty stunning illustrations to this powerful work. Purgatory and Paradise are the concluding two books in the 14th century classic work of Dante, The Divine Comedy.

“The Divine Comedy is a long Italian narrative poem by Dante Alighieri, begun c. 1308 and completed in 1320, a year before his death in 1321. It is widely considered to be the pre-eminent work in Italian literature and one of the greatest works of world literature. The poem's imaginative vision of the afterlife is representative of the medieval world-view as it had developed in the Western Church by the 14th century. It helped establish the Tuscan language, in which it is written (also in most present-day Italian-market editions), as the standardized Italian language. It is divided into three parts: Inferno, Purgatorio, and Paradiso."


"The narrative takes as its literal subject the state of souls after death and presents an image of divine justice meted out as due punishment or reward, and describes Dante's travels through Hell, Purgatory, and Paradise or Heaven, while allegorically the poem represents the soul's journey towards God, beginning with the recognition and rejection of sin (Inferno), followed by the penitent Christian life (Purgatorio), which is then followed by the soul's ascent to God (Paradiso).” - Wiki

Not dated, but "New Edition" on title page, and surely 19th century.

See pictures. Some edge and corner wear to binding. Some loss of gilt to binding, especially at spine. Some rubbing to rear board. Bottom corners of boards lightly bumped. Ink thumb at fore-edge of flyleaf. Occasional dog-eared page, fore-edge thumb mark, toning, and occasional rust spot throughout. Mostly clean. The hinges haven't torn, which is somewhat rare to find in this large book. 2nd frontis image has smudge of ink at upper-right margin. Two spots on Purgatory frontis, no text affected. These Dore/Collier editions were very popular, and often show great signs of wear; this copy is one of the best I've seen.