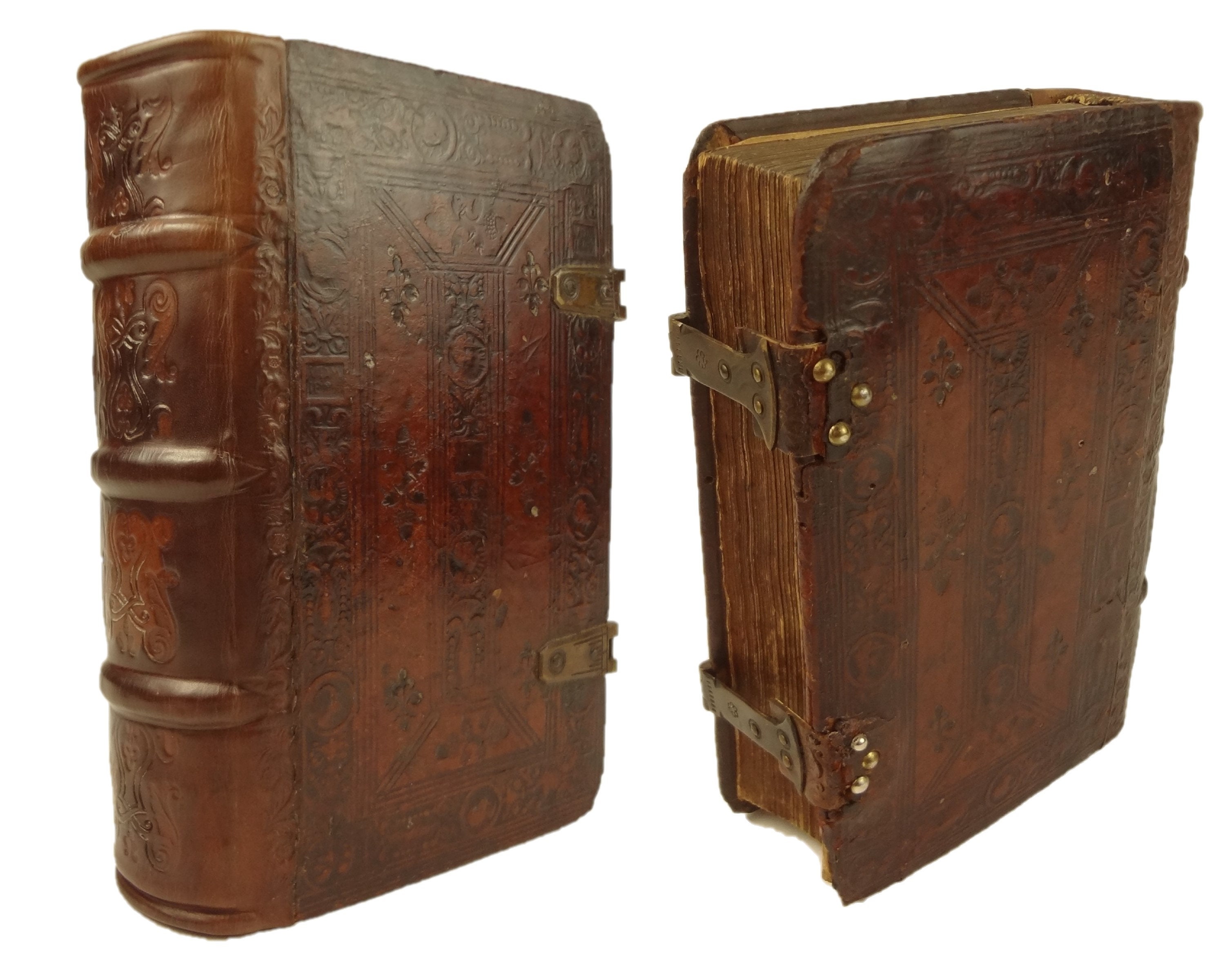 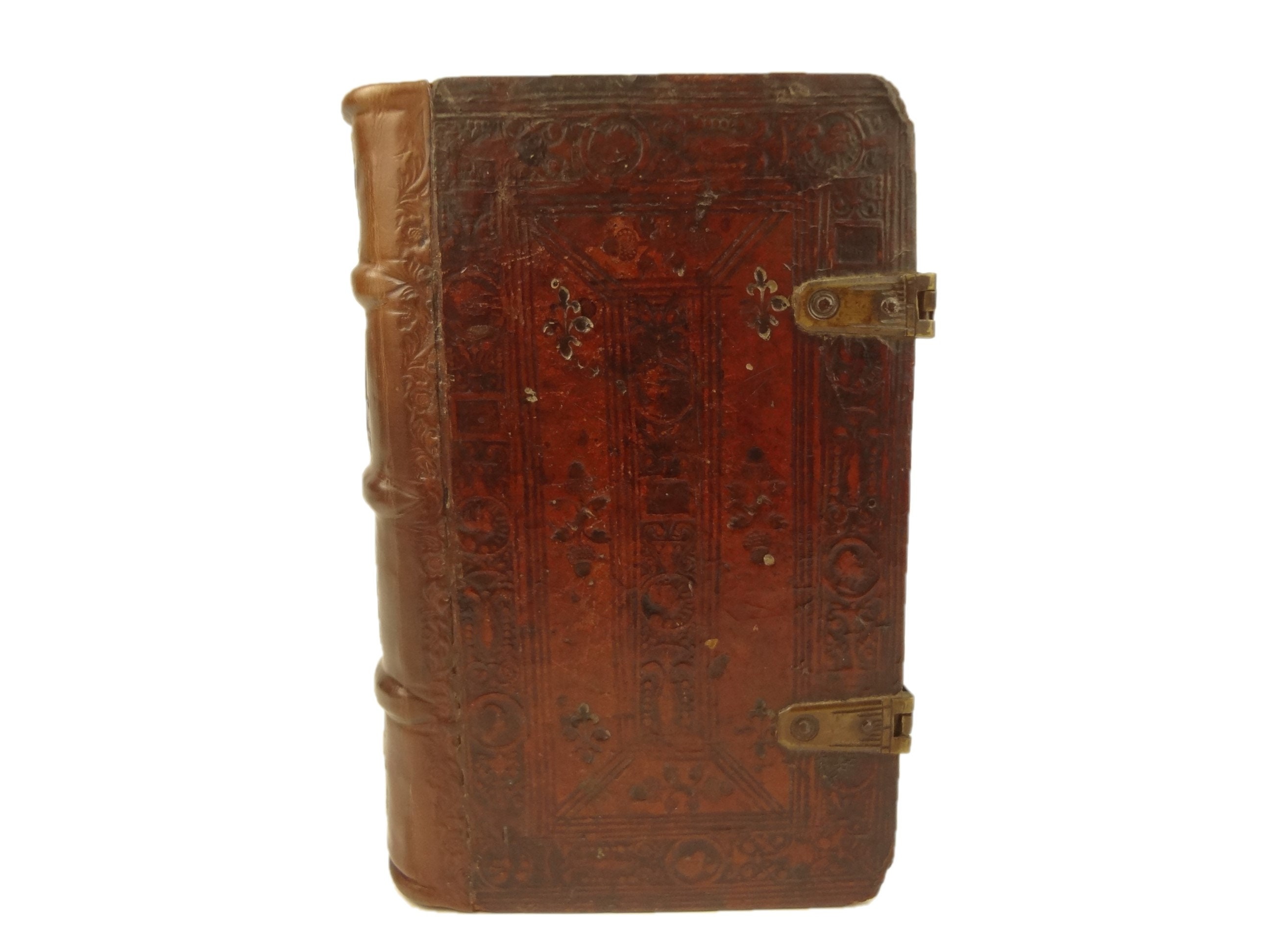 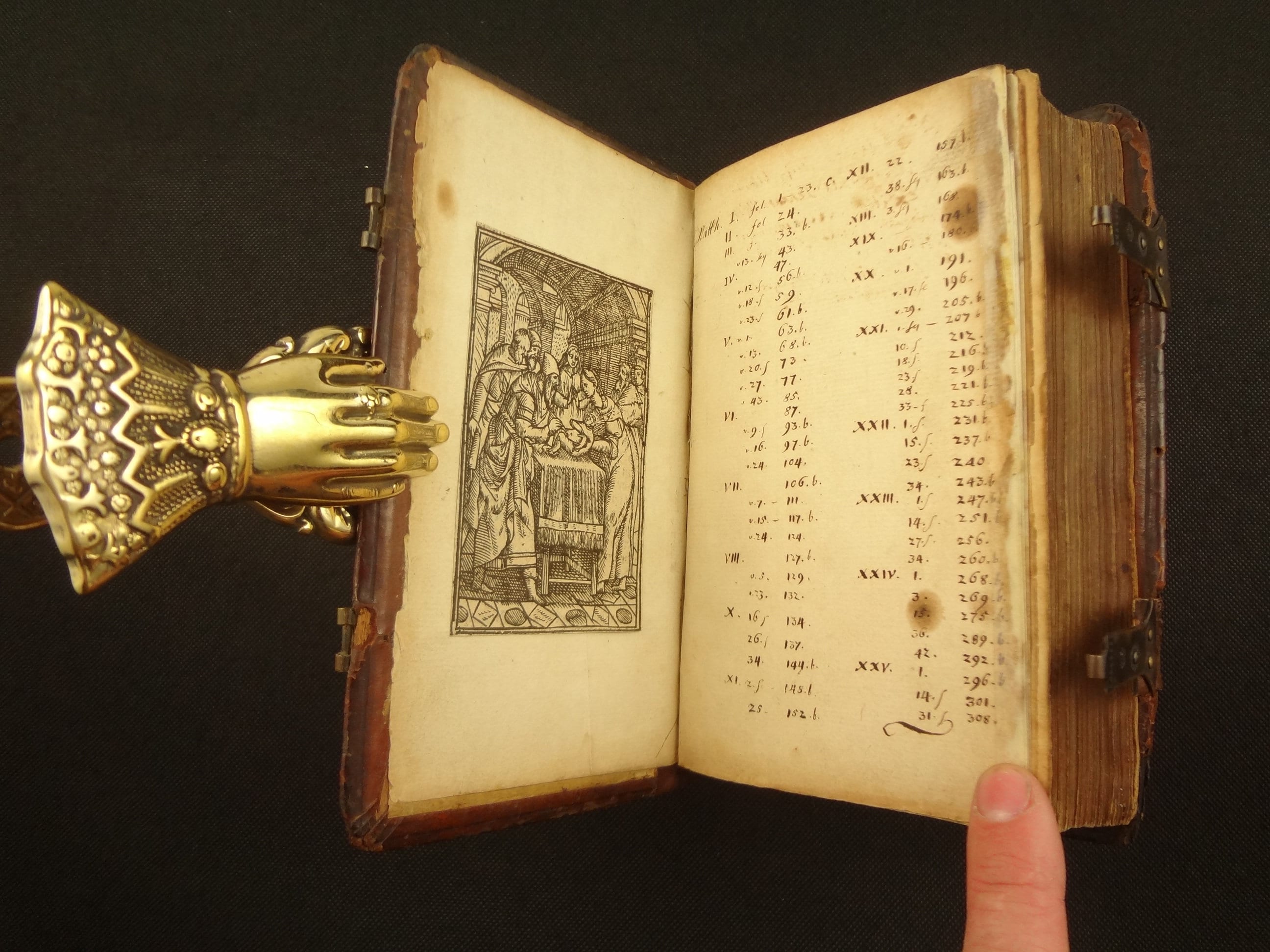 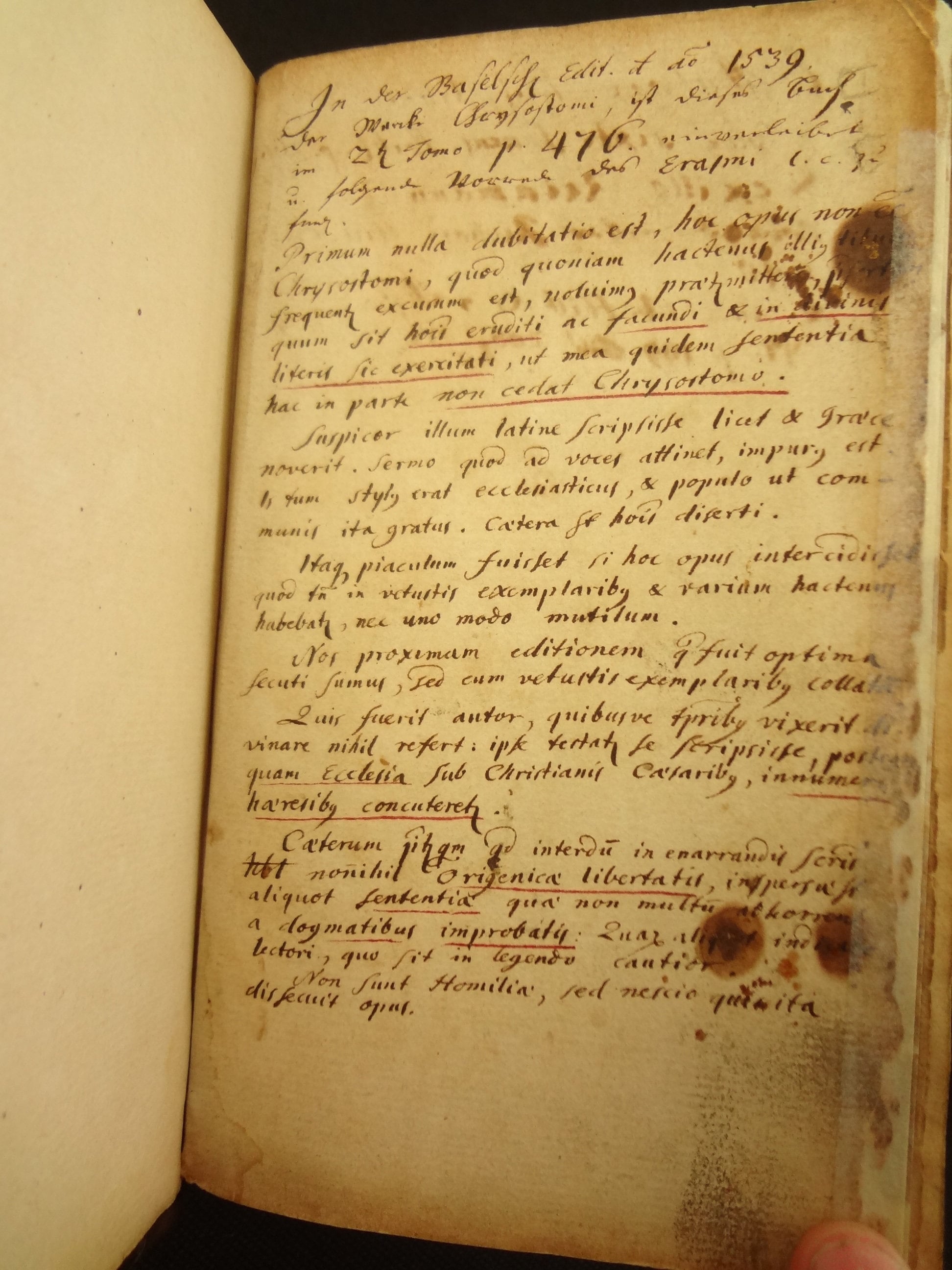 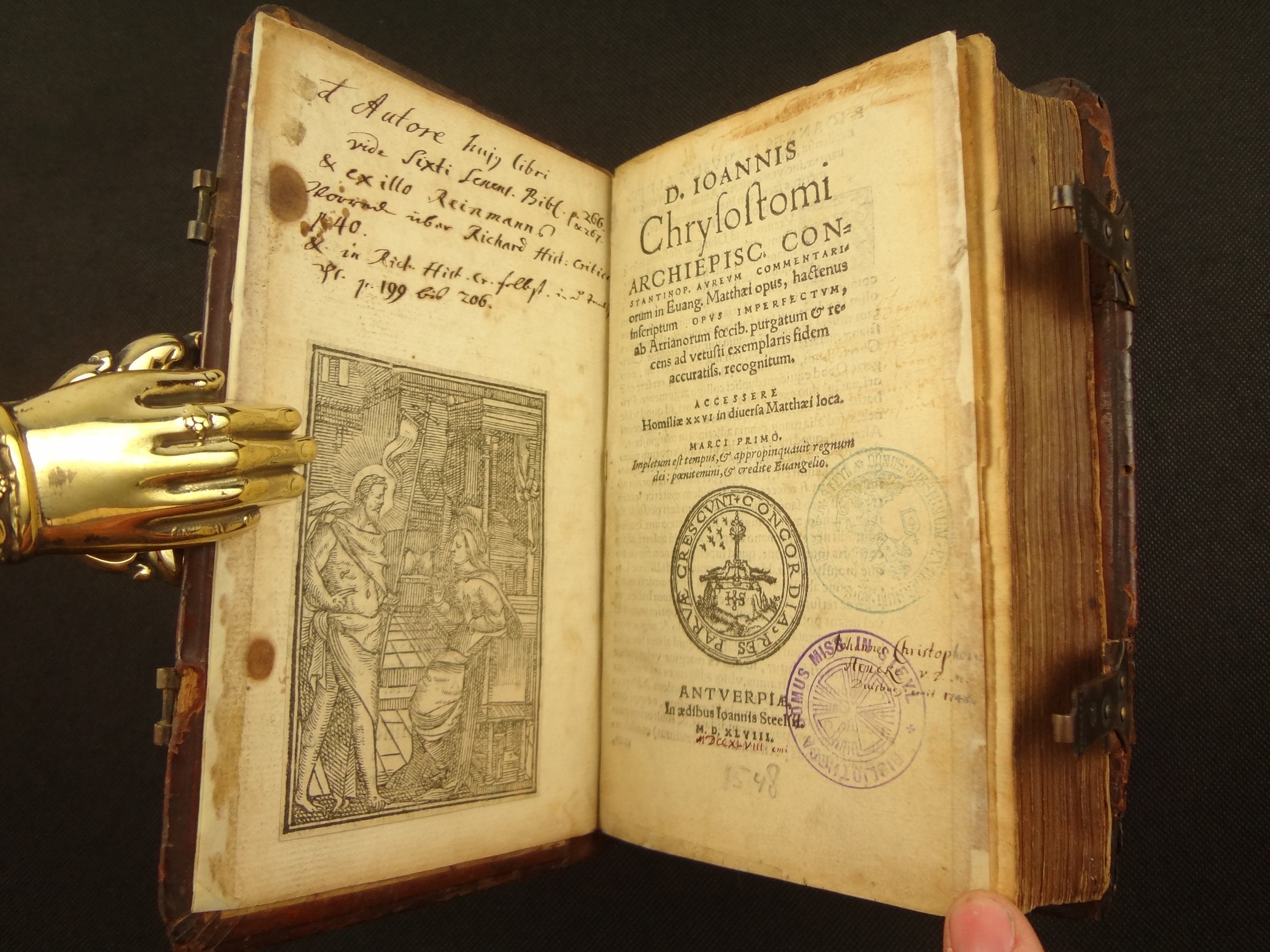 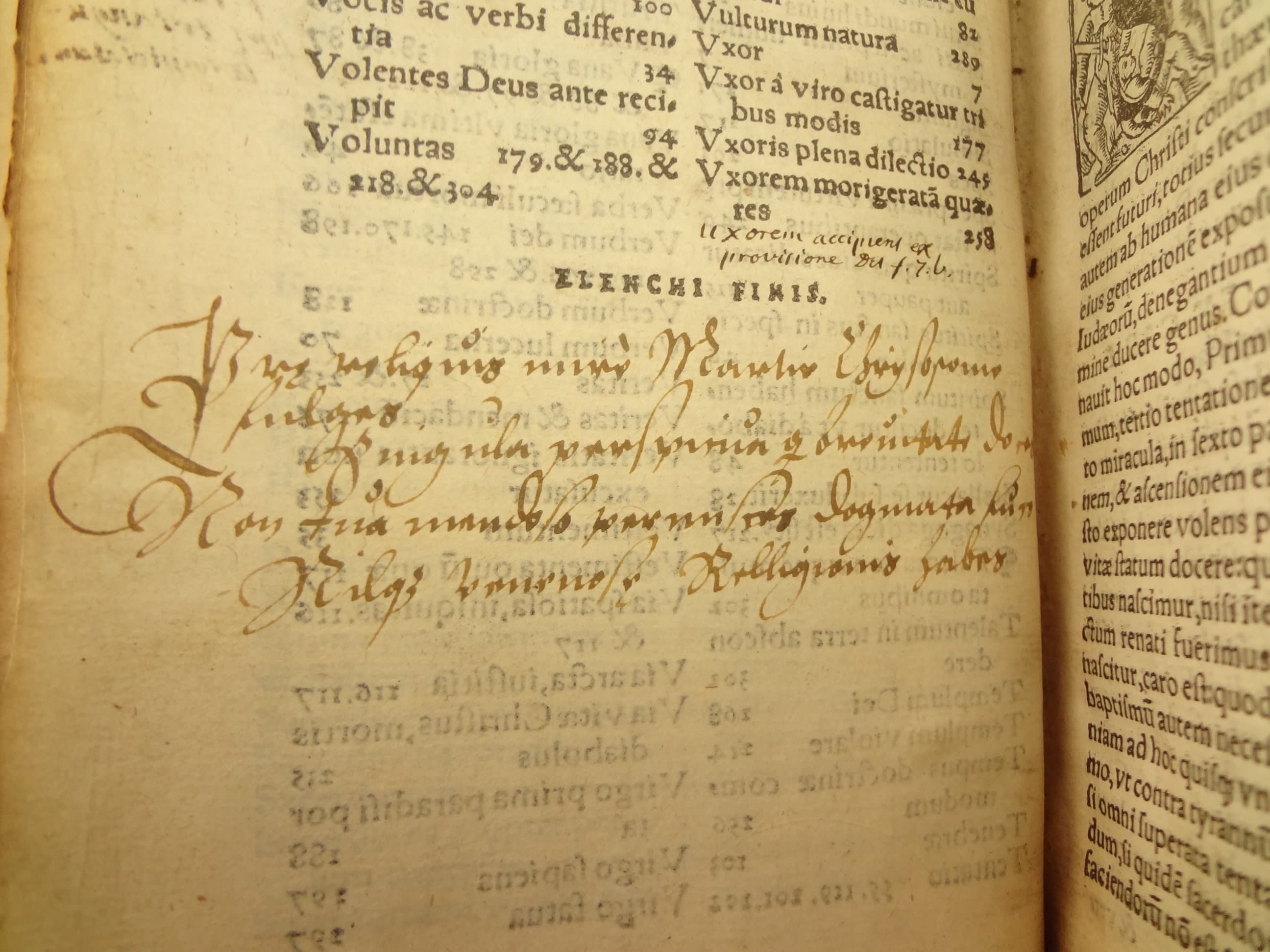 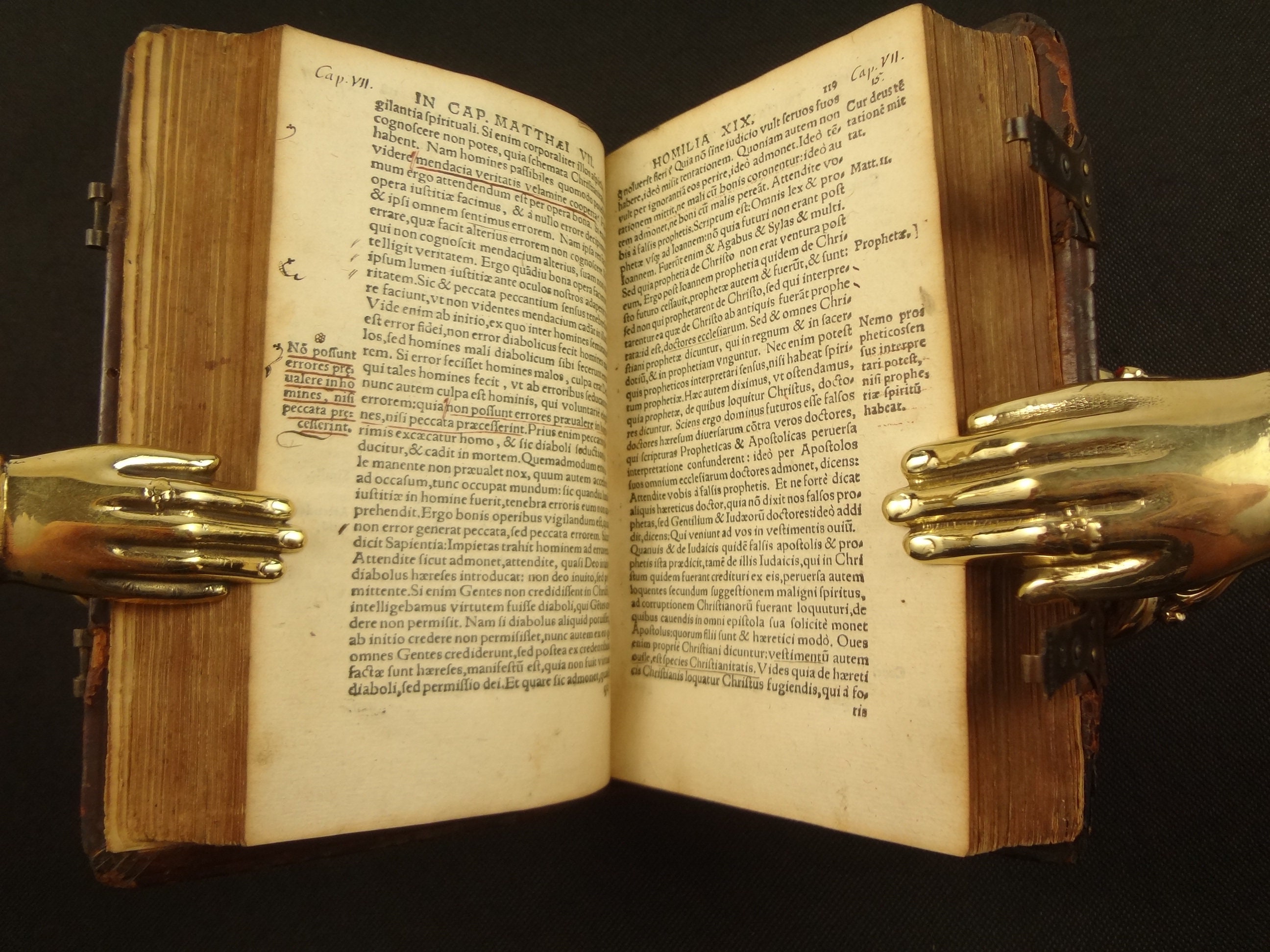 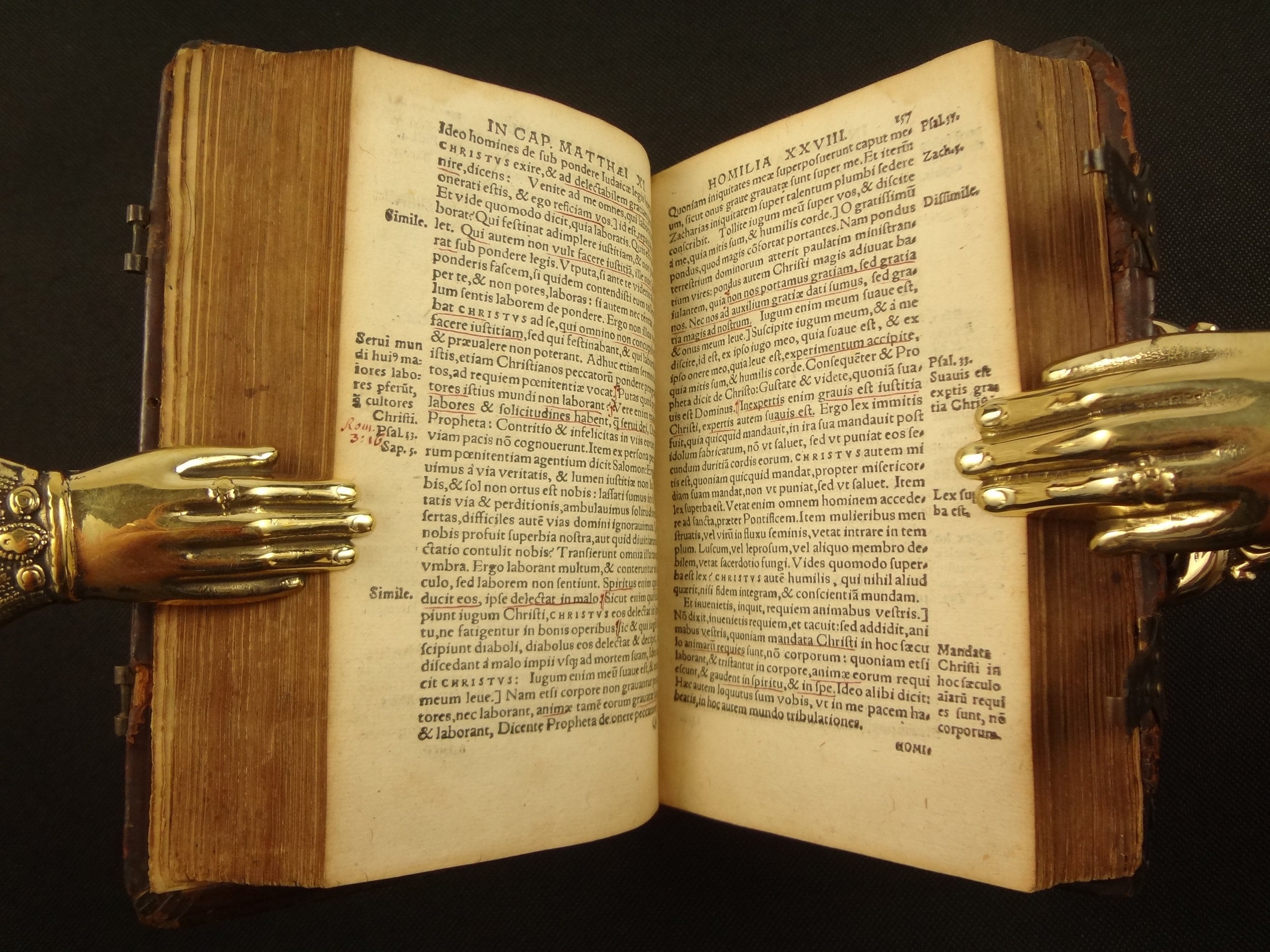 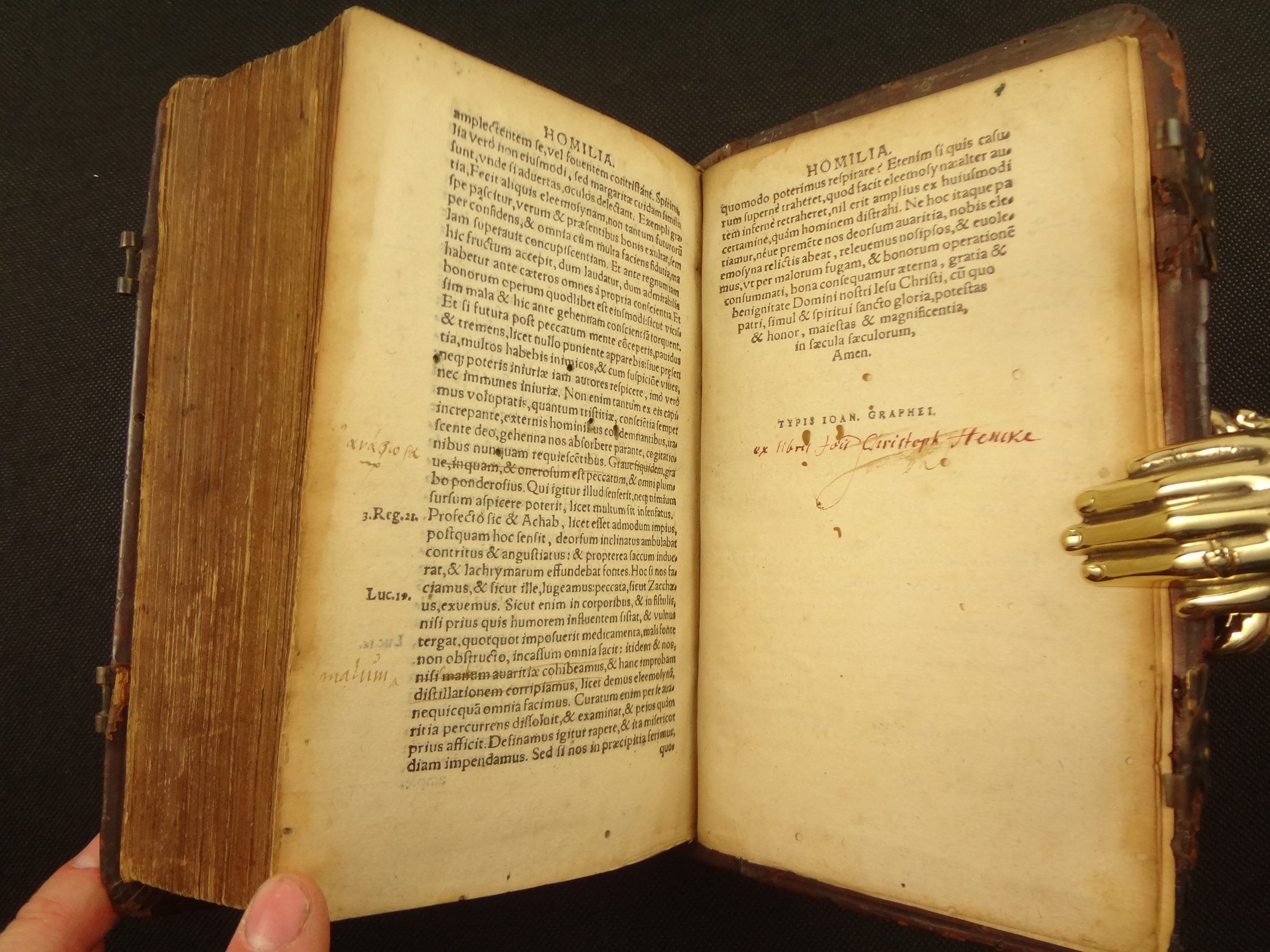 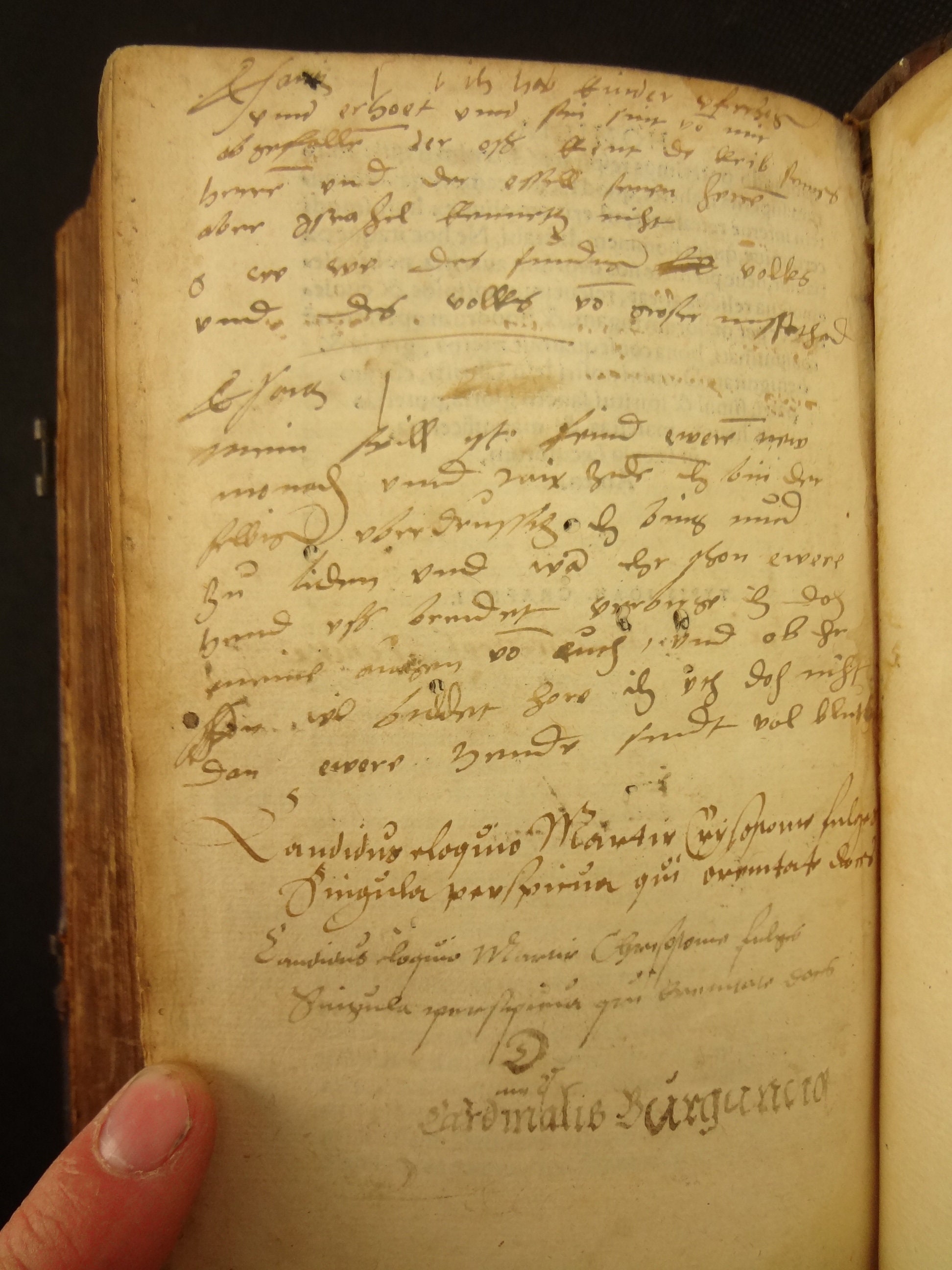 A lot of church history bound up in this 1548 printing of the second century saint John Chrysostom's commentaries on Matthew.

Still retaining its characteristic 16th century boards, with the wonderful blind tooling typical of that century. The closure clasps still work (although likely repaired). The spine has been replaced and the binding is strong, complete and ready for further centuries.

There are three phases (possibly four, if you consider the binding) of noticeable Christian ownership.

At the rear, and occasionally throughout, is an old hand (16th or 17th century?), which at the rear signed "Cardinalis Burguncia".

Lastly, the monasteries in Steyl stamped the title page several times; I particularly like the stamp with the archangel Michael.

John Chrysostom (347 –407), was an important Early Church Father who served as Archbishop of Constantinople. He is known for his preaching and public speaking, his denunciation of abuse of authority by both ecclesiastical and political leaders, the Divine Liturgy of Saint John Chrysostom, and his ascetic sensibilities. The epithet Chrysostomos (anglicized as Chrysostom) means "golden-mouthed" in Greek and denotes his celebrated eloquence. Chrysostom was among the most prolific authors in the early Christian Church, exceeded only by Augustine of Hippo in the quantity of his surviving writings.

Printed by the Flemish printer Joanes Stelsius, with his printer's mark featuring a flourishing together of the small (in reference to the low countries).

See pictures. Vintage patina, with the pleasing look of history. Respined, likely recently. Wood boards with signs of use, including corner and edge wear, rubbing. A handful of small wormholes. Some polish residue. First leaves, through title, have fore-edge repair.

On pastedown, and blank endpaper, two old woodcuts have been pasted in. Many notes of previous owners on endpapers. Title page with two stamps of the monasteries in Steyl, and the ex libris inscriptions of Johann Christoph Henchke in Duisburg. Toning throughout. Some page edge chipping. Occasional thumb. Annotated throughout, several old hands. Moisture mark at edges/gutter, mostly marginal; seldom just touches text. Handful of worm holes from rear to about mid-book.