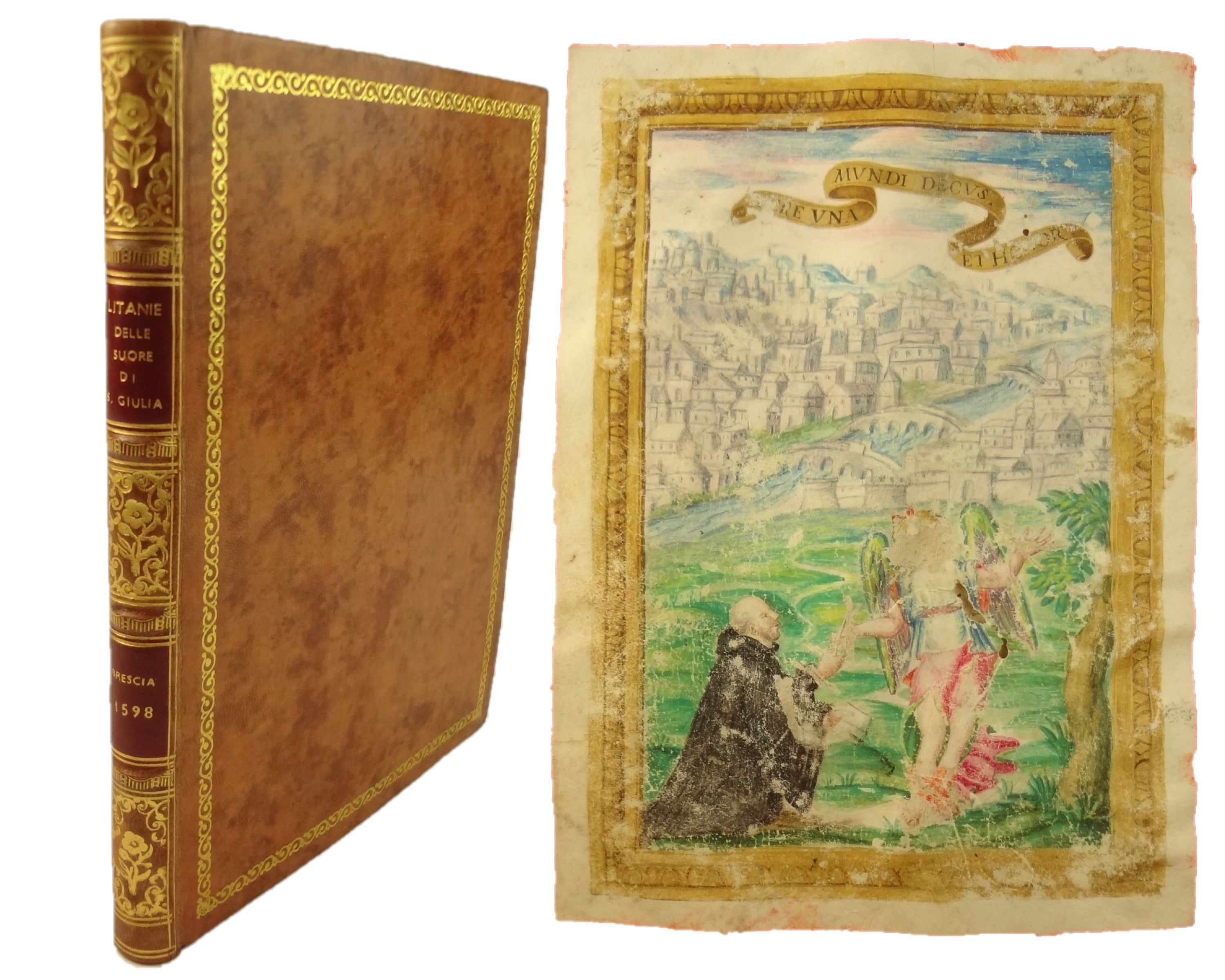 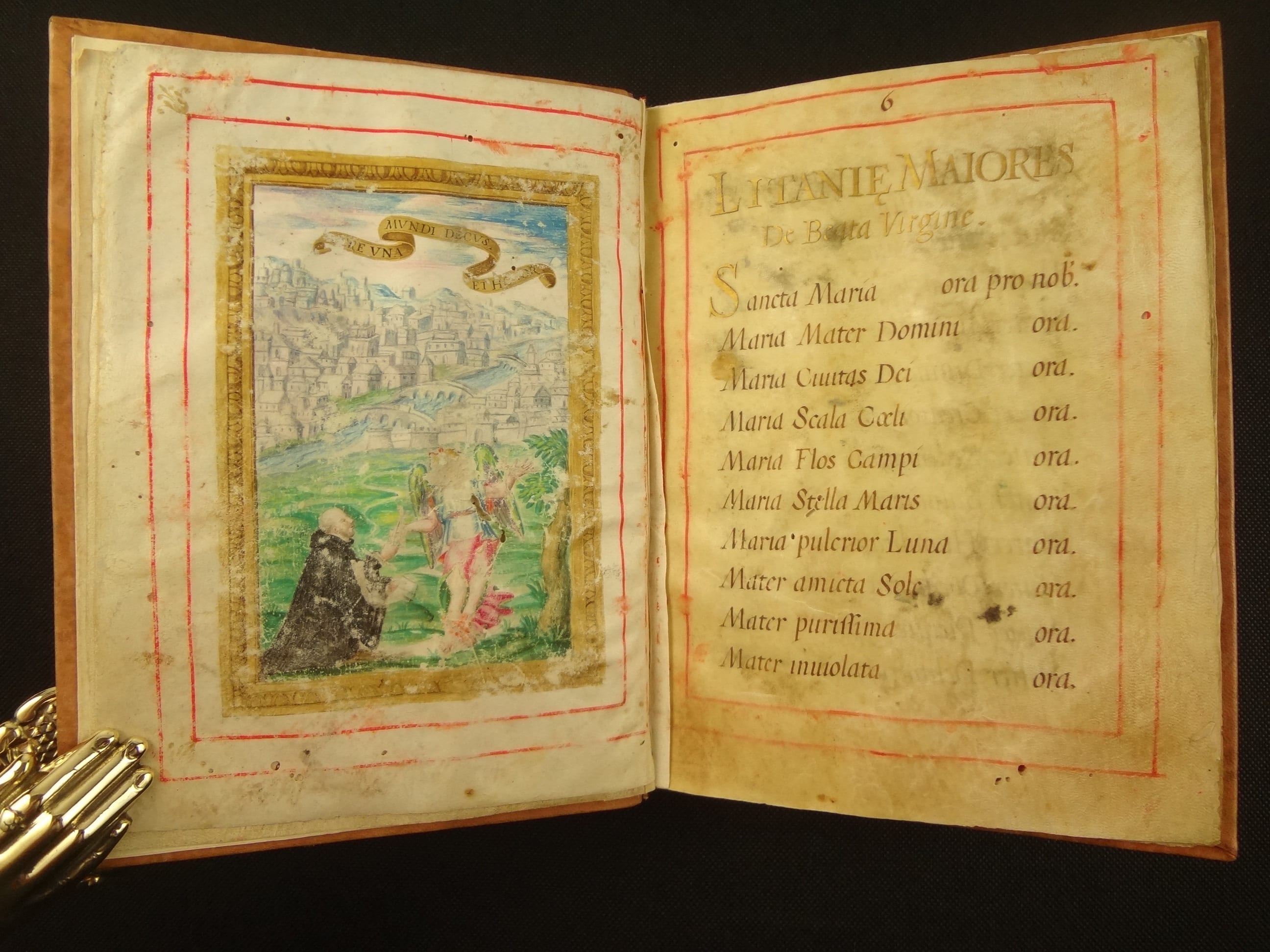 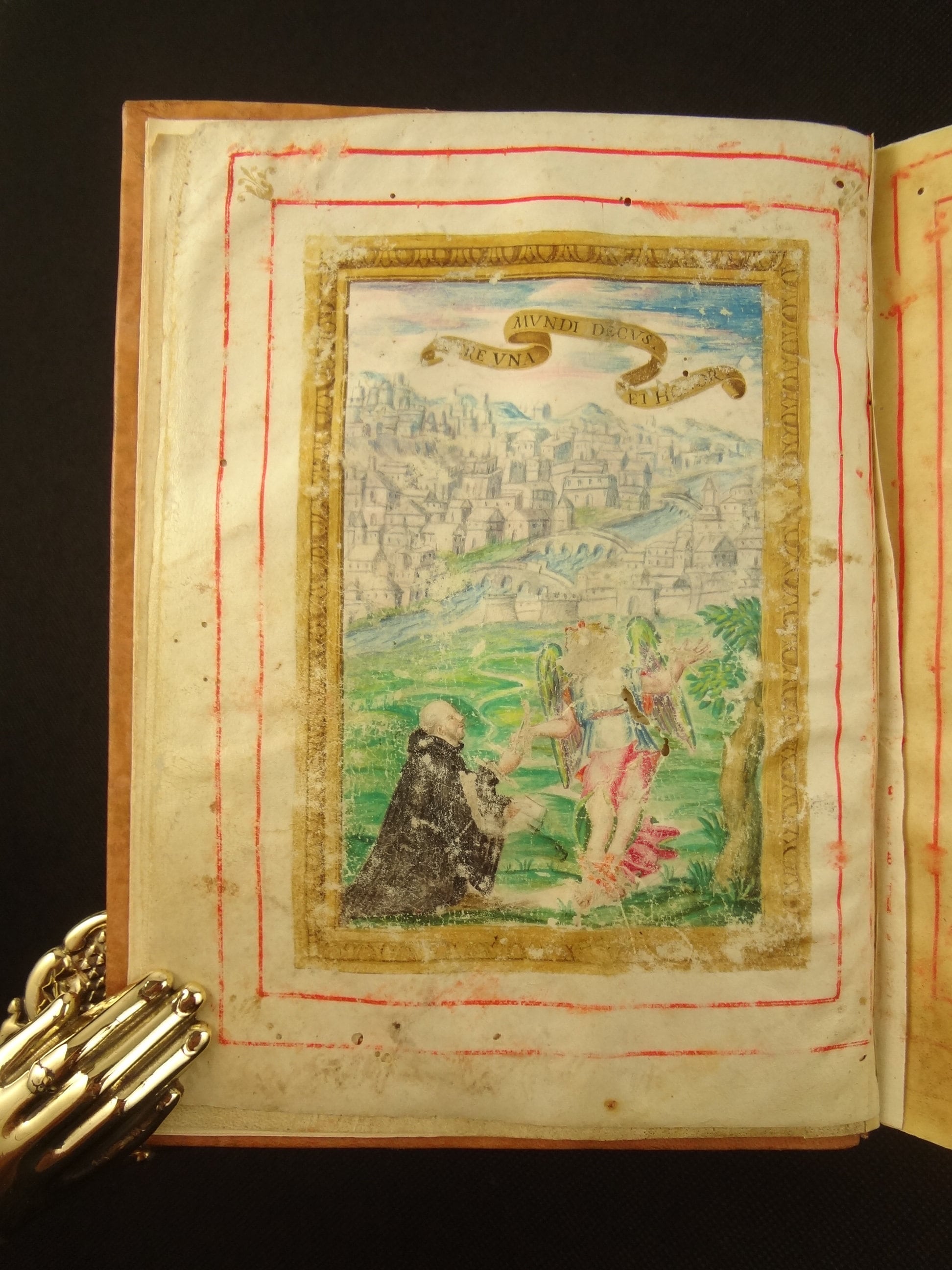 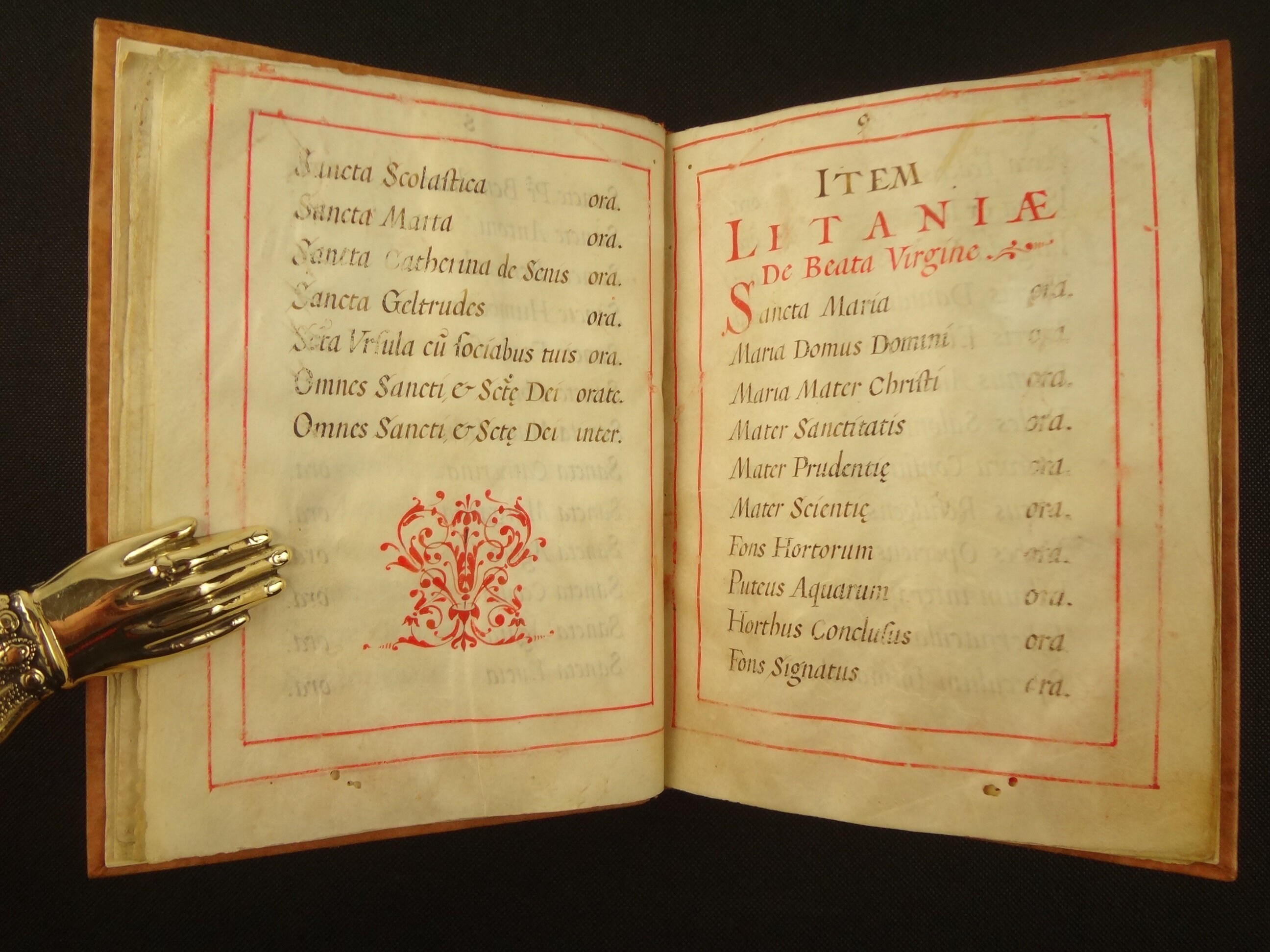 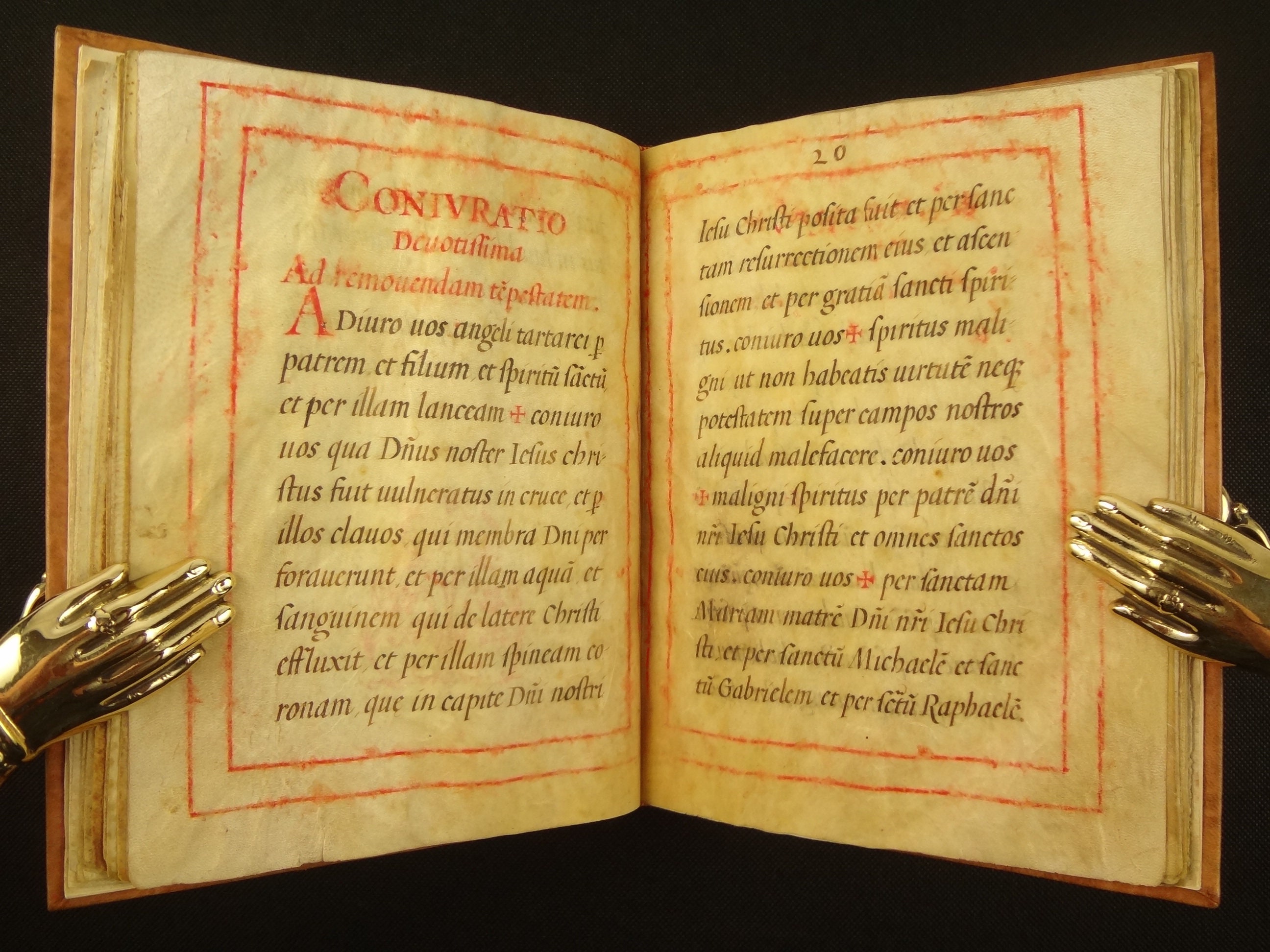 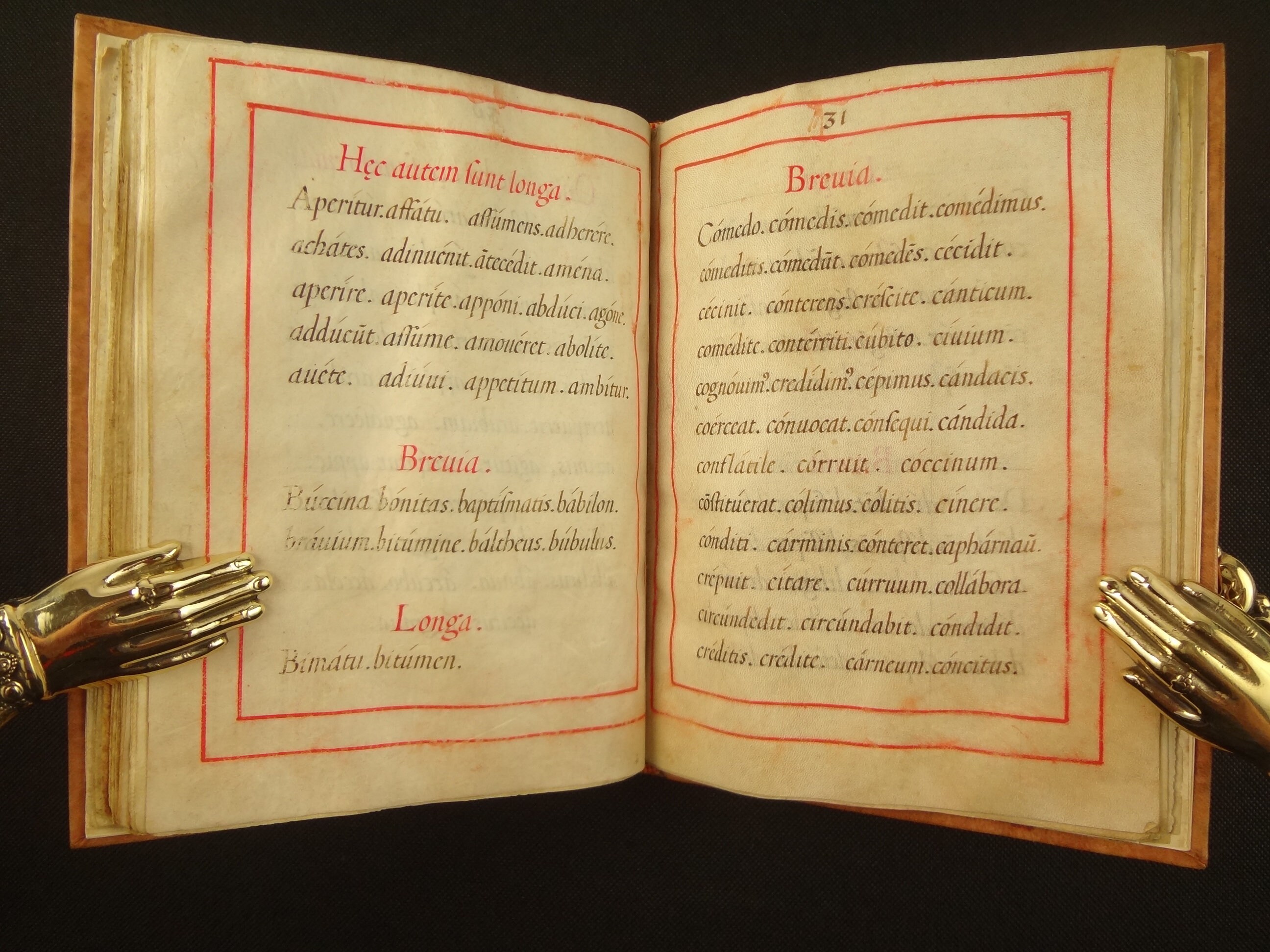 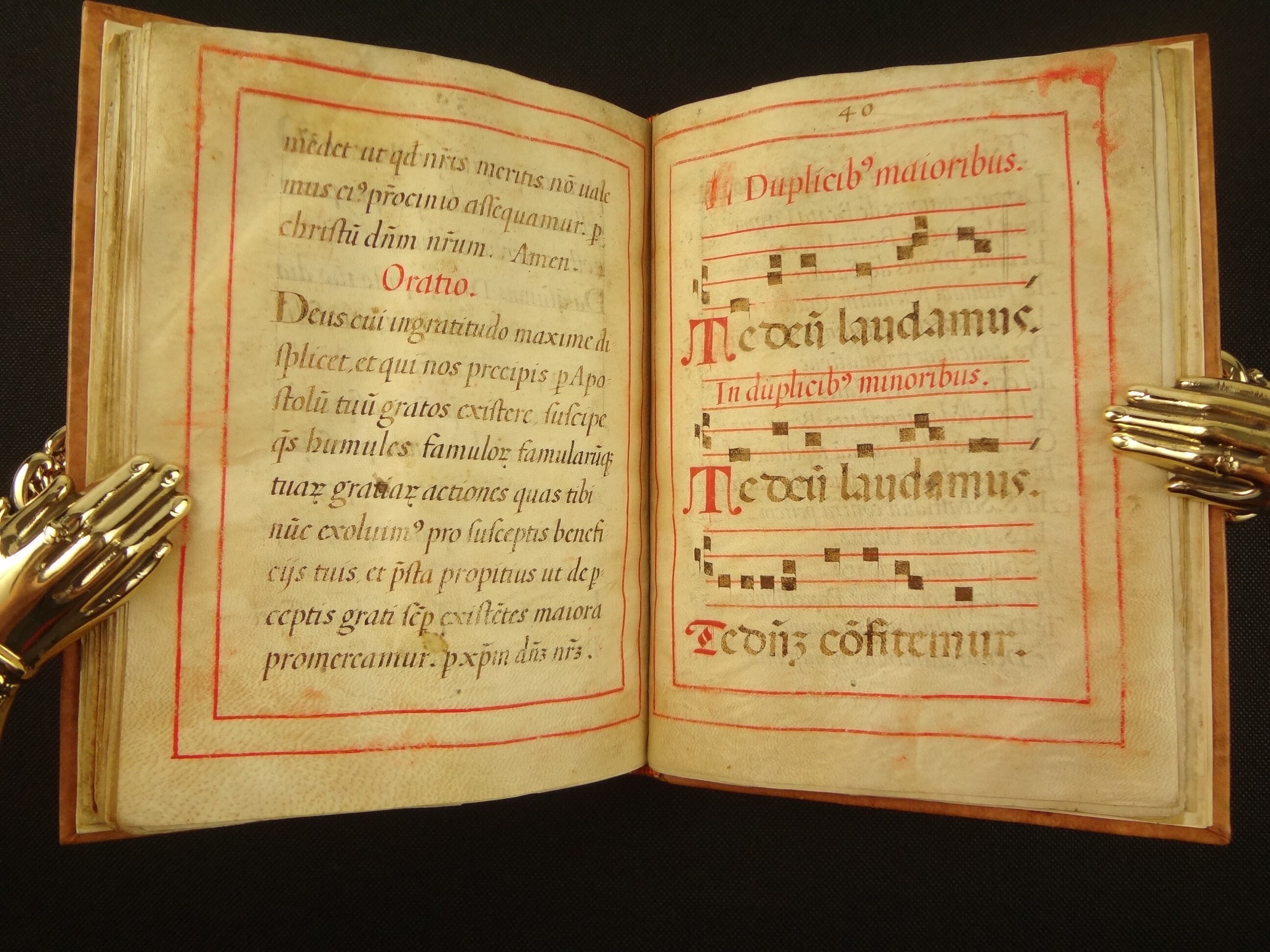 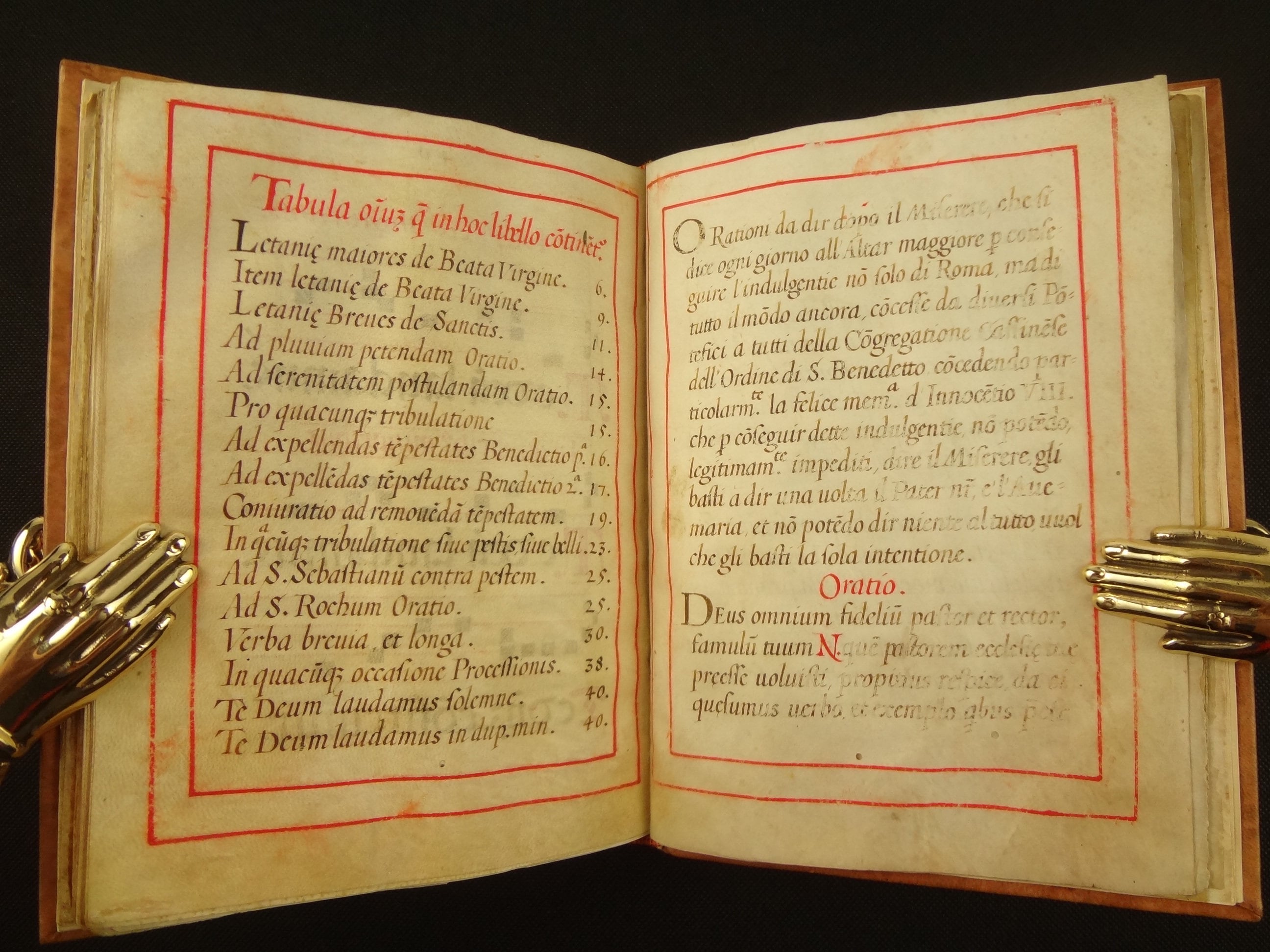 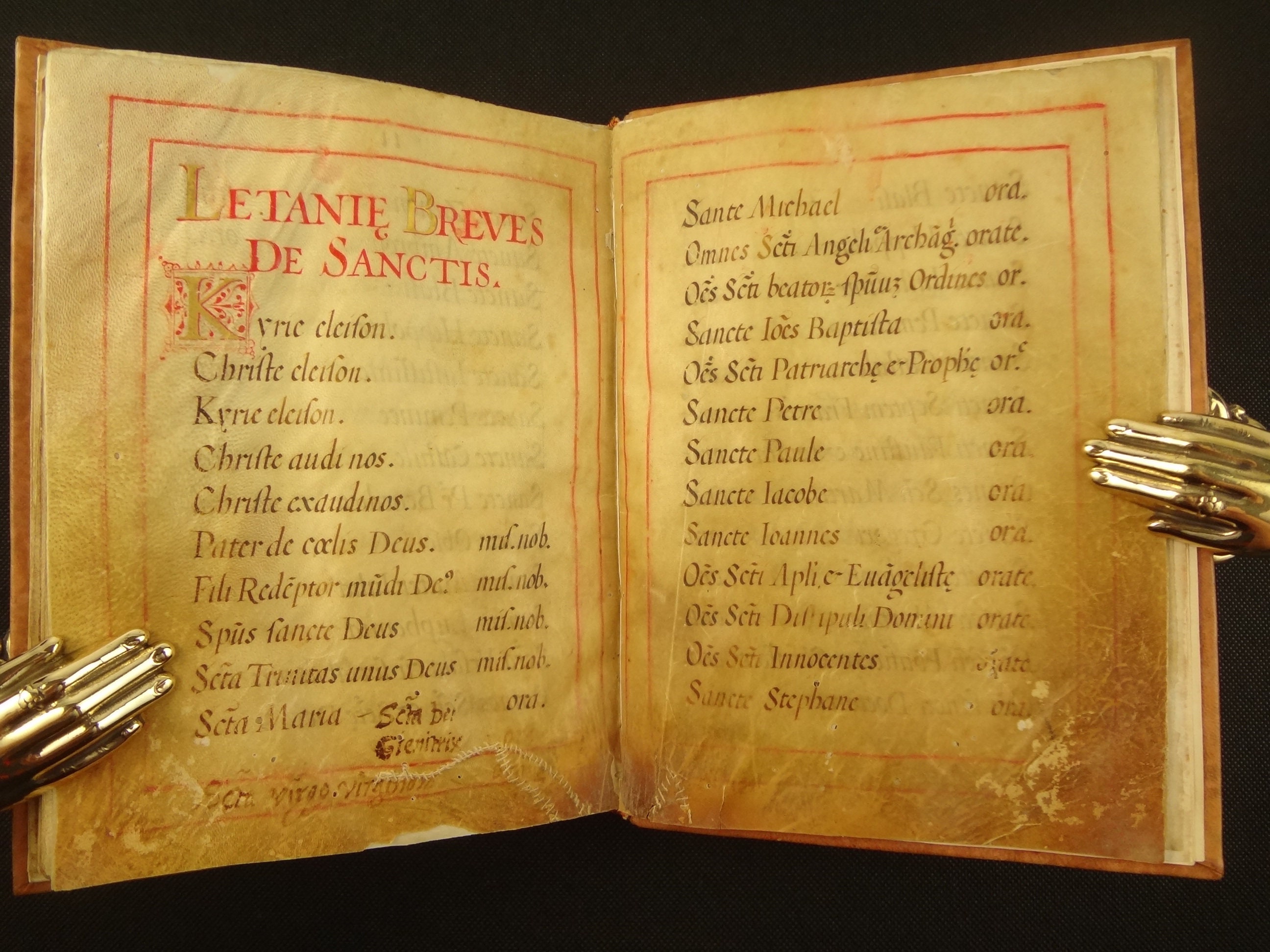 A fascinating and beautiful manuscript, produced for Brescia, and dated 1598, with a full-page miniature of a monk being given a quill by an angel (possibly in front of Florence, and the river Arno). The manuscript is delightfully well-thumbed, indicating it was referenced often, and was once in the collection of the 19th century Italian antiquarian Paolo Vimercati Sozzi, with his ex libris plate at the front.

This is a rich work because it contains many different elements associated with illuminated manuscripts.

The first vellum leaf is an index of bible verses that contain prayers ("orate"), based on their theme.

The second leaf, through the fourth, appears to be a dedication to the men and women at Brescia (titled - "al le, molte reverende et devote signore, le reverende madri, di sancta Guiulia di Brescia"). Words such as "charita" and "diligenta" can be seen in the text. It is signed "Il Padre" and dated 1598, on the recto of leaf four.

On the verso (rear) of the fourth leaf, is the miniature of a monk being handed a quill. Possibly the book's giver was depicting that he was told by an angel to write this manuscript.

Regarding the miniature: it is interesting to note that Brescia doesn't have a river running through it, and the illustration seems to (possibly) depict Florence, and the river Arno.

To argue against the Florence theory, the ribbon at the top of the miniature contains the words, "Mundi Decus.", which could refer to the phrase "caput mundi, mundi decus, aurea Roma", referring to Rome as the capital of the world; but the word at the right of the ribbon is likely "honore", which doesn't apply to said phrase (and the painting doesn't look like Rome).

If it is Florence, it is a very early contemporary view of the city.

Leaf five, per the contemporary numbering, is missing.

The verso of 13, through leaf 17, contain shorter oratio (prayers) on various subjects.

Leaves 18 to 23 recto, contain longer prayers, including one that has been noted as somewhat rare and unique, a prayer against storms Coniuratio Deuotissima ad Femouendam Tepestatem (elsewhere referred to as Conjuratio Contra Tempestate Oratio Devotissima). This prayer against storms seems to have been read in the rain based on the leaf's condition, with slight blurring to the edges of letters, and a little cockling (waviness) to the leaves!

The verso of 23 begins an "Antiphona" (ecclesiastical chant), which concludes on 24, with more Oratio (prayers) following, through the recto of 26.

Leaf 26's verso is blank, indicating a transition, and leaves 27 to 29 are further instructions, in Italian, from the Padre that signed the dedication at leaf 4 (again signed at 29).

Leaves 30-37 are an ecclesiastical glossary, with short and long words associated with the church, listed by letter, from A to U (but the modern v).

Leaves 38-39 are Oratio for Occasione Processionis.

The verso of 40 is a table of contents, correctly referring back to the sections preceding. After the table's title, the table begins at leaf six, with no mention of five, so a guess is a second miniature was stolen at leaf five.

The leaves following (after the first 40 leaves) are the same size, and with the same framing of red rule, but the pagination is completely random and they seem to have been collected from other sources, and merely placed at the end as bonus material.

The first four leaves are more Oratio. The fifth leaf is another litany, which concludes at the recto of leaf 8. The verso of eight begins full orationes, which go through leaf 9. The prayers at 8-9 are incredibly thumbed, and must have been referenced/prayed prolifically. Words include "A fulgure et tempestate libera nos domine", again referring to storms. Curious about this, I searched the term "Stormy Brescia" and found that the region receives violent storms.

The tenth leaf, of this "bonus" section, is a mounted printed title; it is wormed and heavily abbreviated. It looks like a 16th century book label, and probably came off the old binding.

The vellum leaves conclude with one blank leaf.

A few initials and titles in gilt throughout the manuscript. Mostly titles and initials in red. All pages framed in double red ruling. Some head and tail-pieces depicting flowers and vines. One page of musical notes. One full-page miniature. 50 leaves of vellum (of 51, missing leaf 5).

2nd blank endpaper is older, with thumbing and the ex libris plate of Paolo Vimercati Sozzi. Occasional worming throughout, stronger at front.

Well-used. Many of the leaves are mounted at gutter. Obviously rebound. Some variation of trim size throughout.

Looks like a few pages were read in the rain, as some leaves have that distinctive look to the ink. Some ghosting of the red ruled frames on to the facing leaves. Loss of gilt and rubbing to some of the leaves. Important to note face of angel rubbed away, and a worm hole on same angel.

Graphite "3" on first vellum page. 2nd leaf with stitched repair at top edge, 2" hole, and loss of initial to facing page, manuscript faded. Some leaves far more toned then, some extremely well-thumbed; but a few, clean soft and white (can be at the opposite side of a leaf, so not "later" additions). Occasional chip or small at leaf edge. Ink faded and re-applied on a handful of leaves. Occasional cockling (waviness) of leaves, light. Occasional rubbed out, or over-marked word.