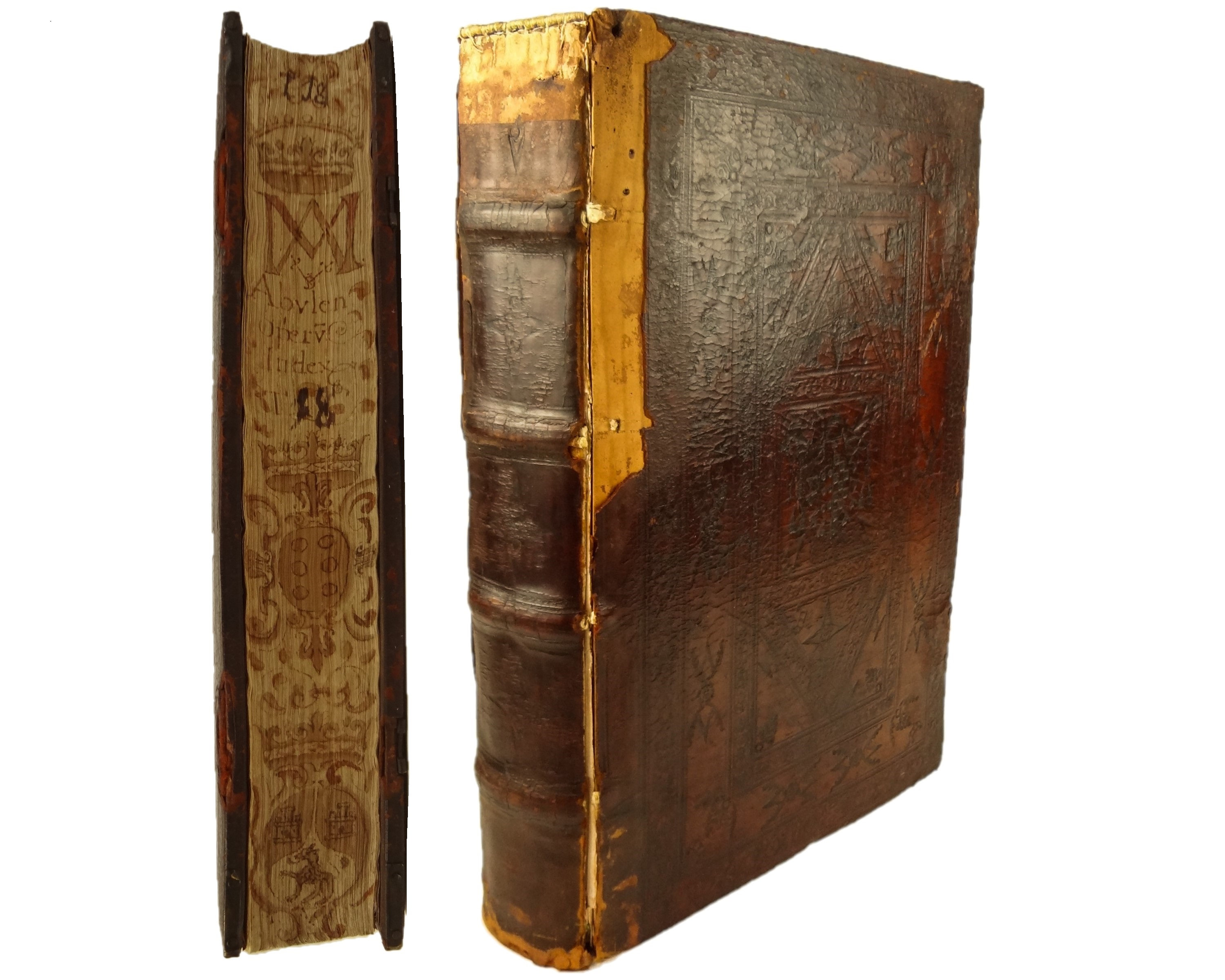 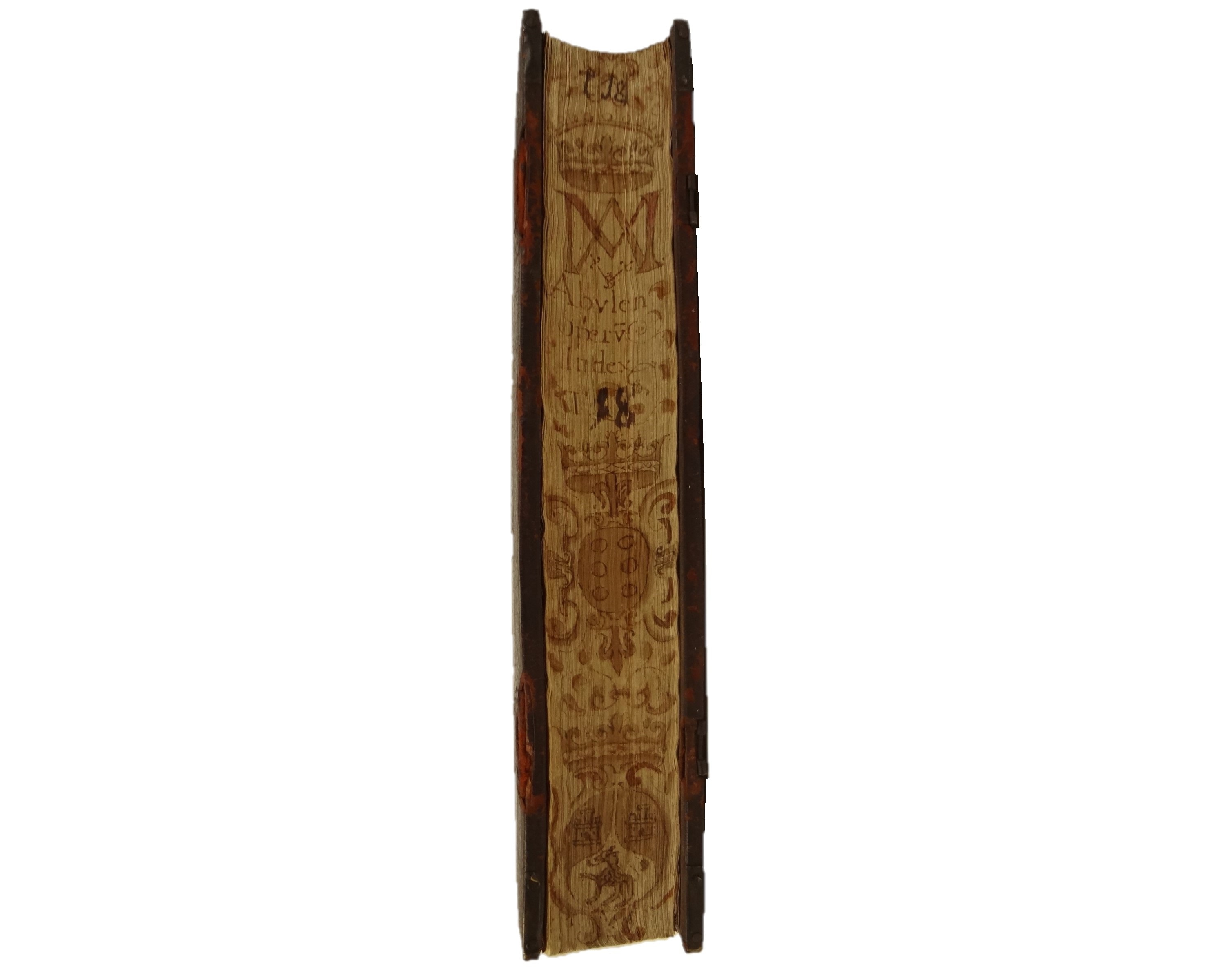 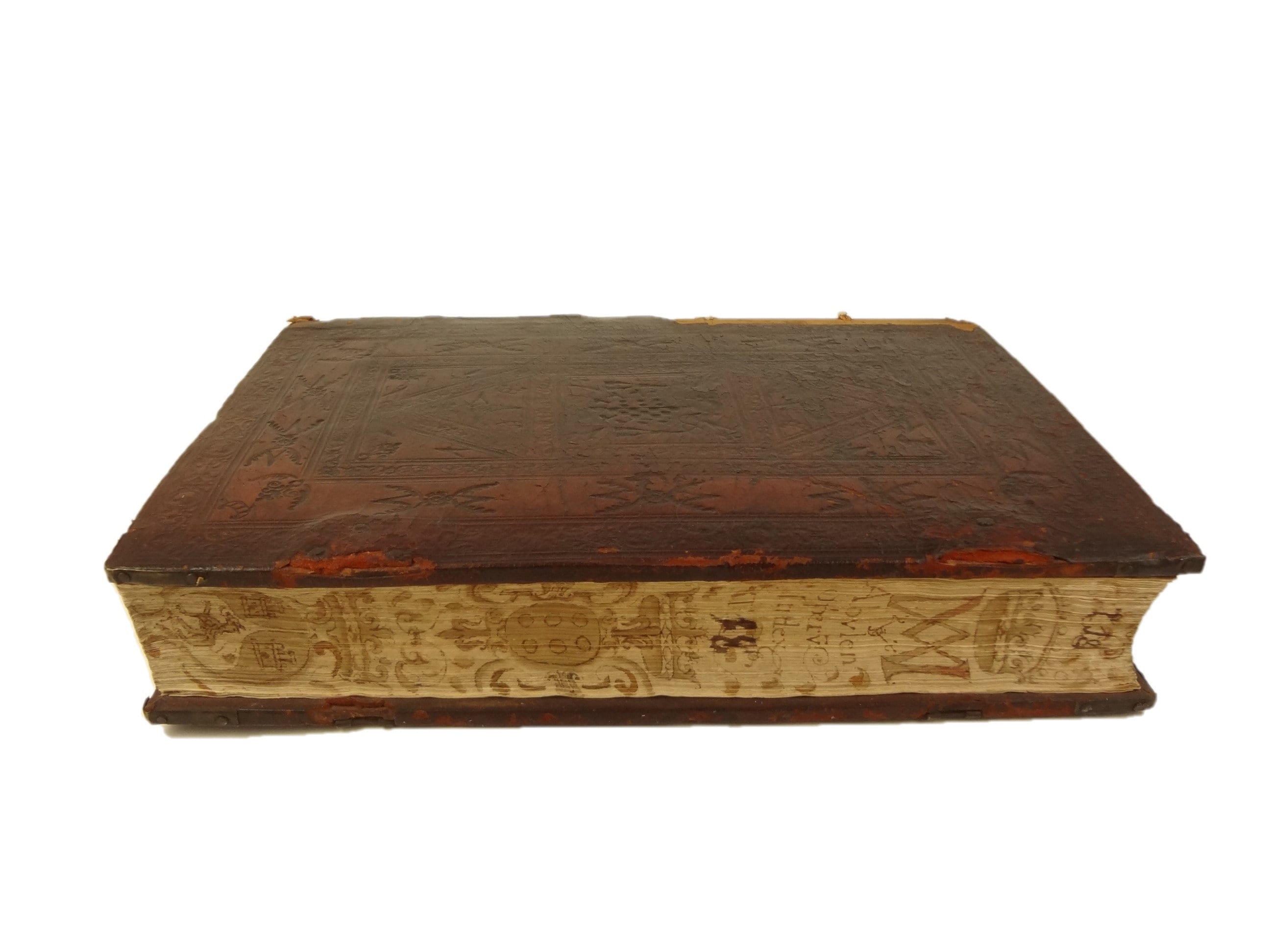 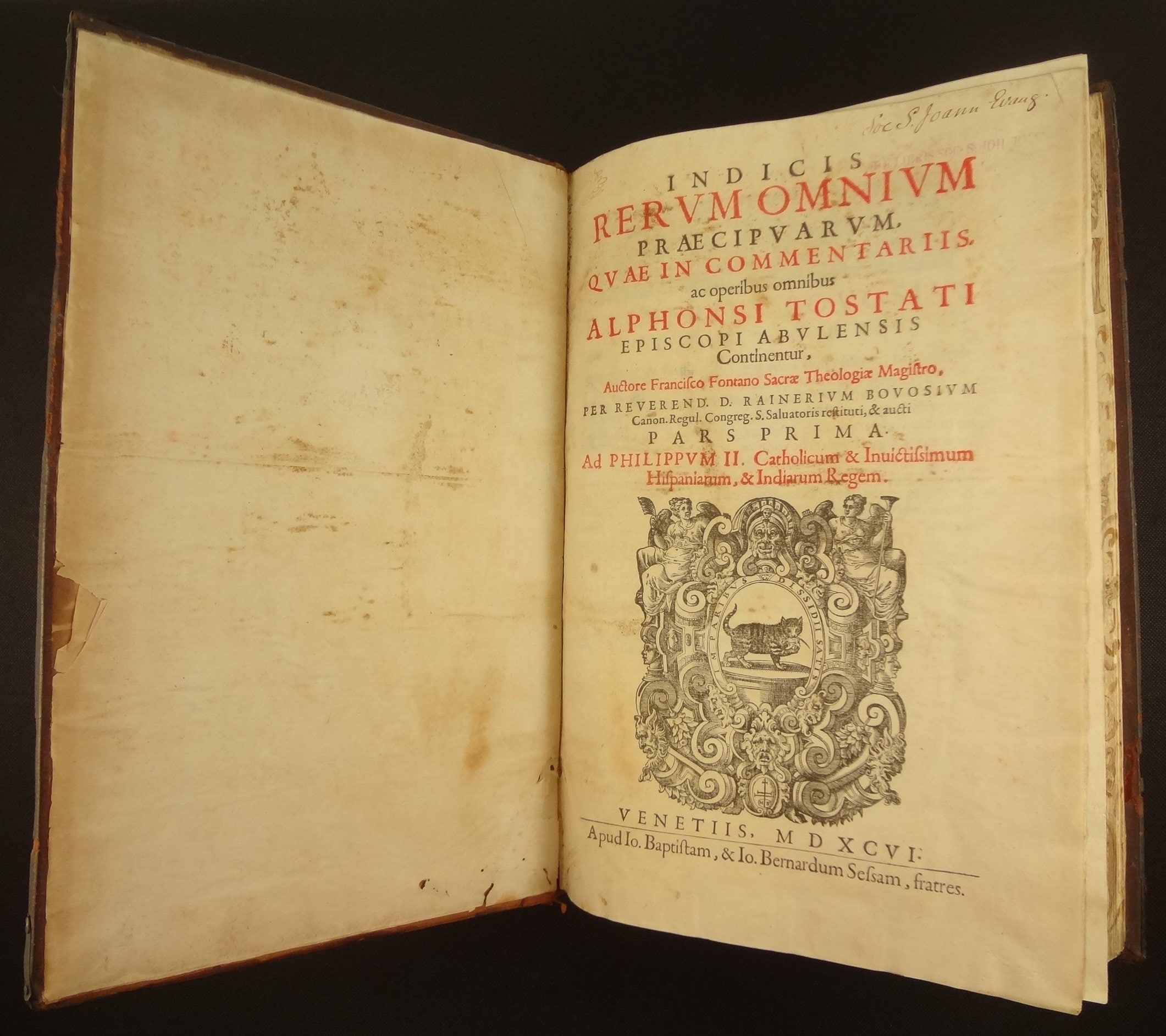 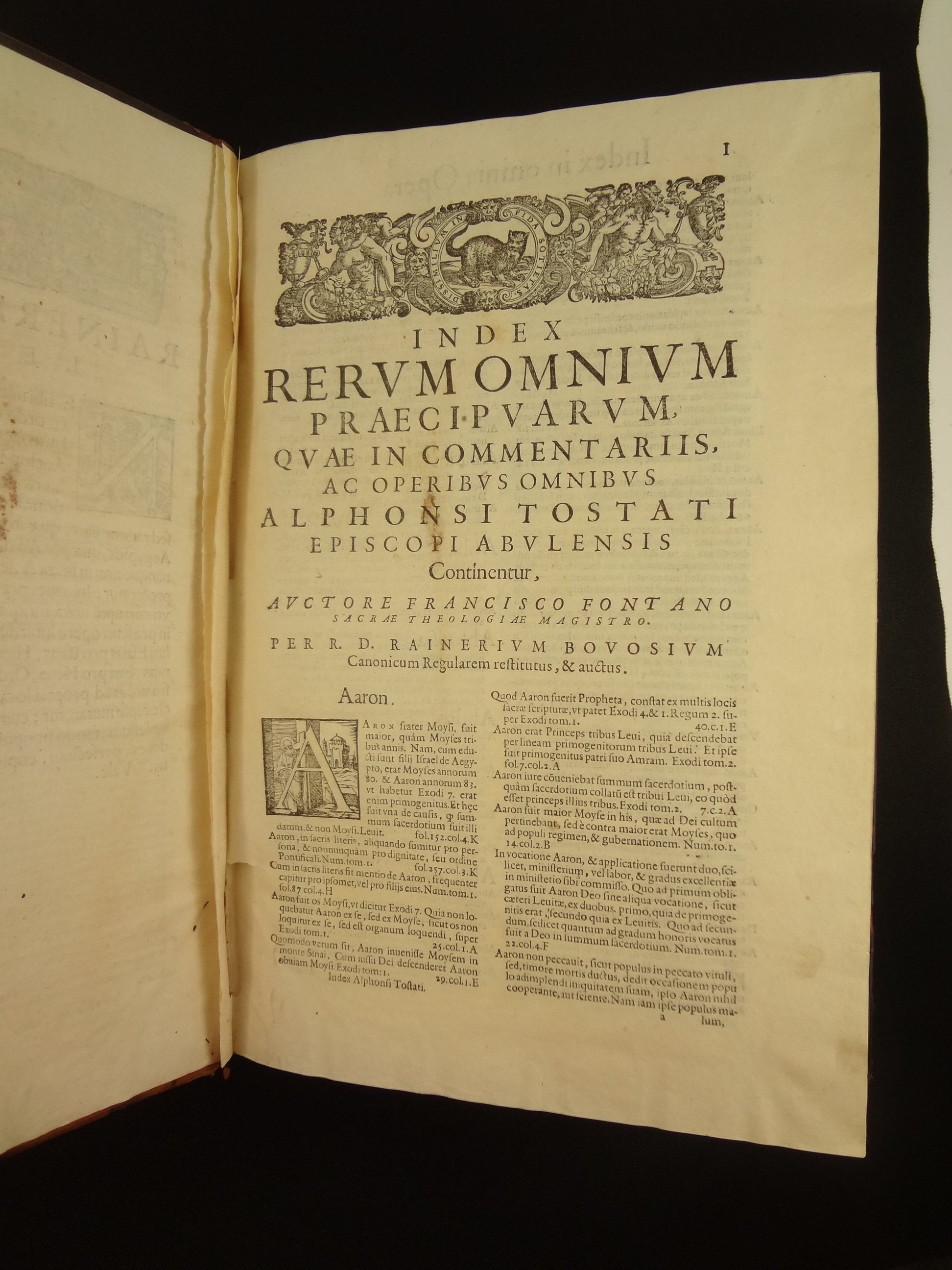 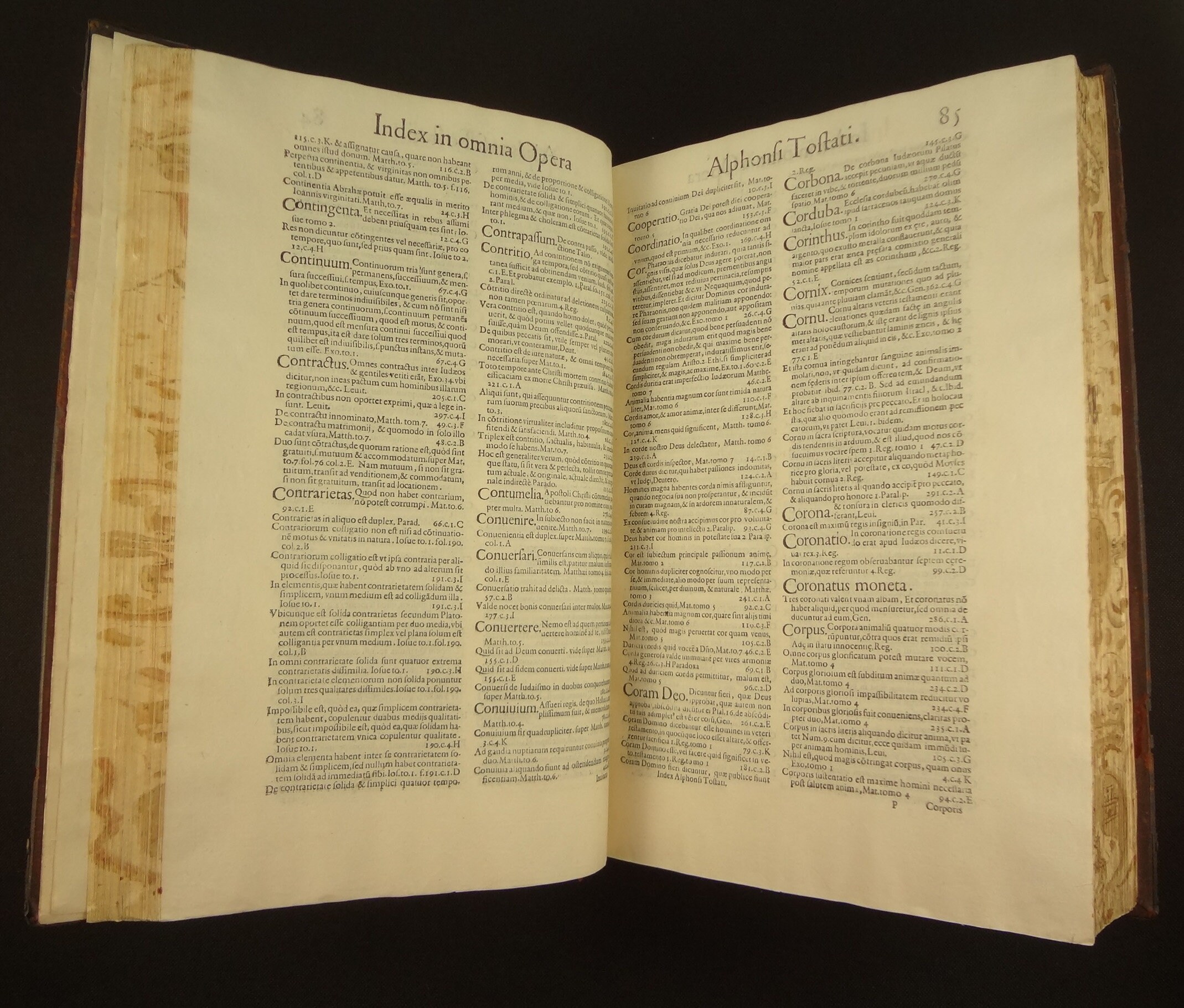 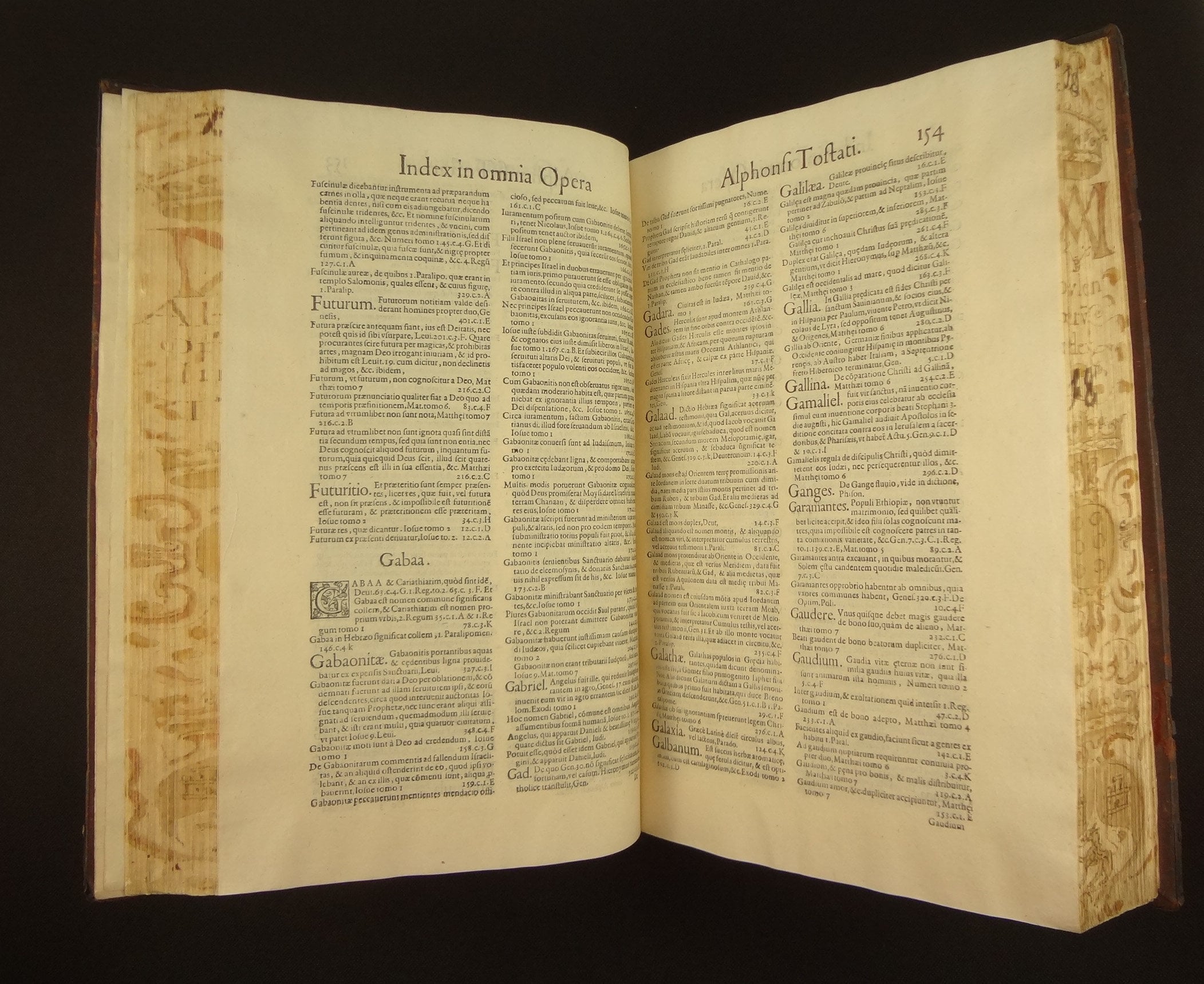 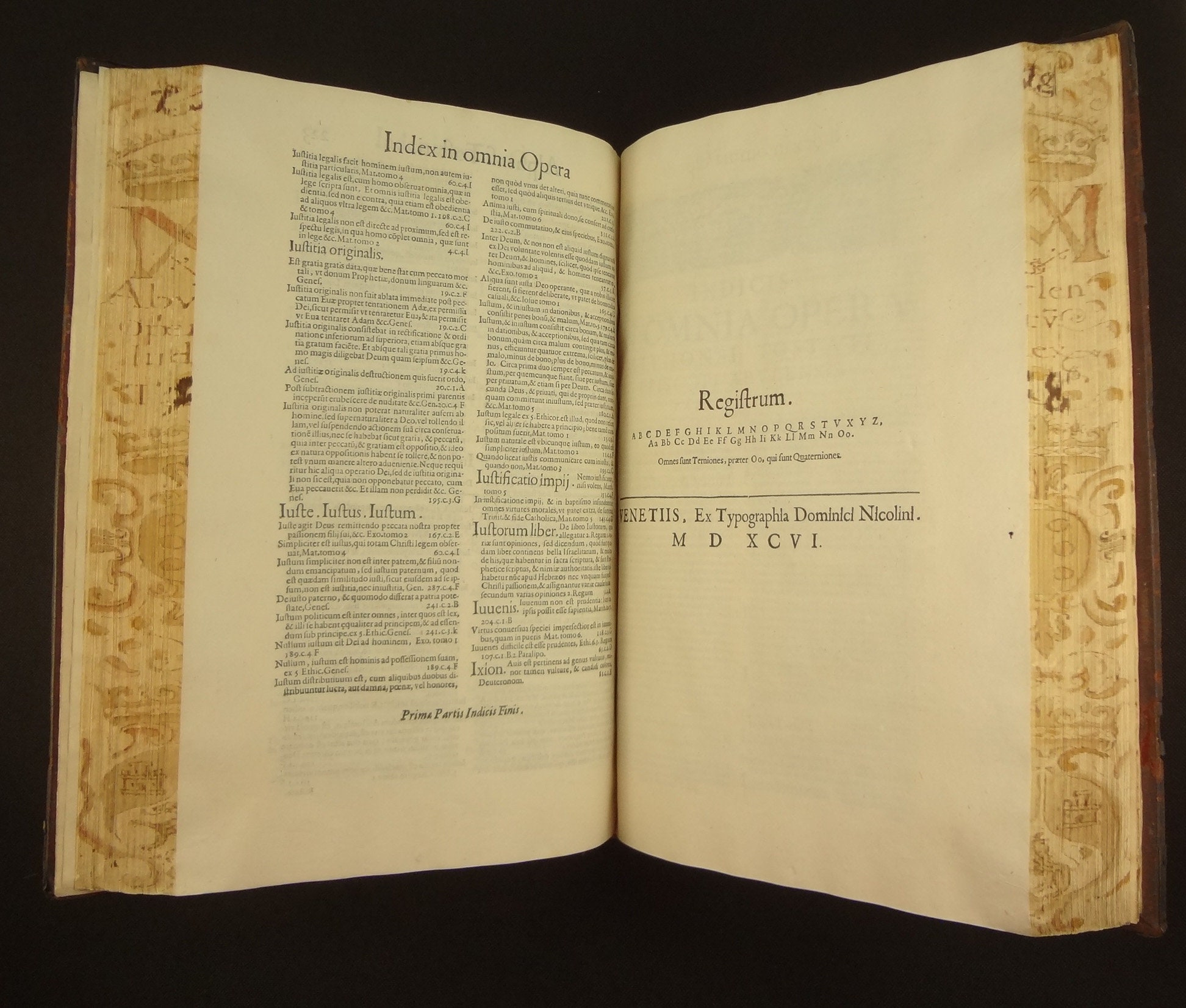 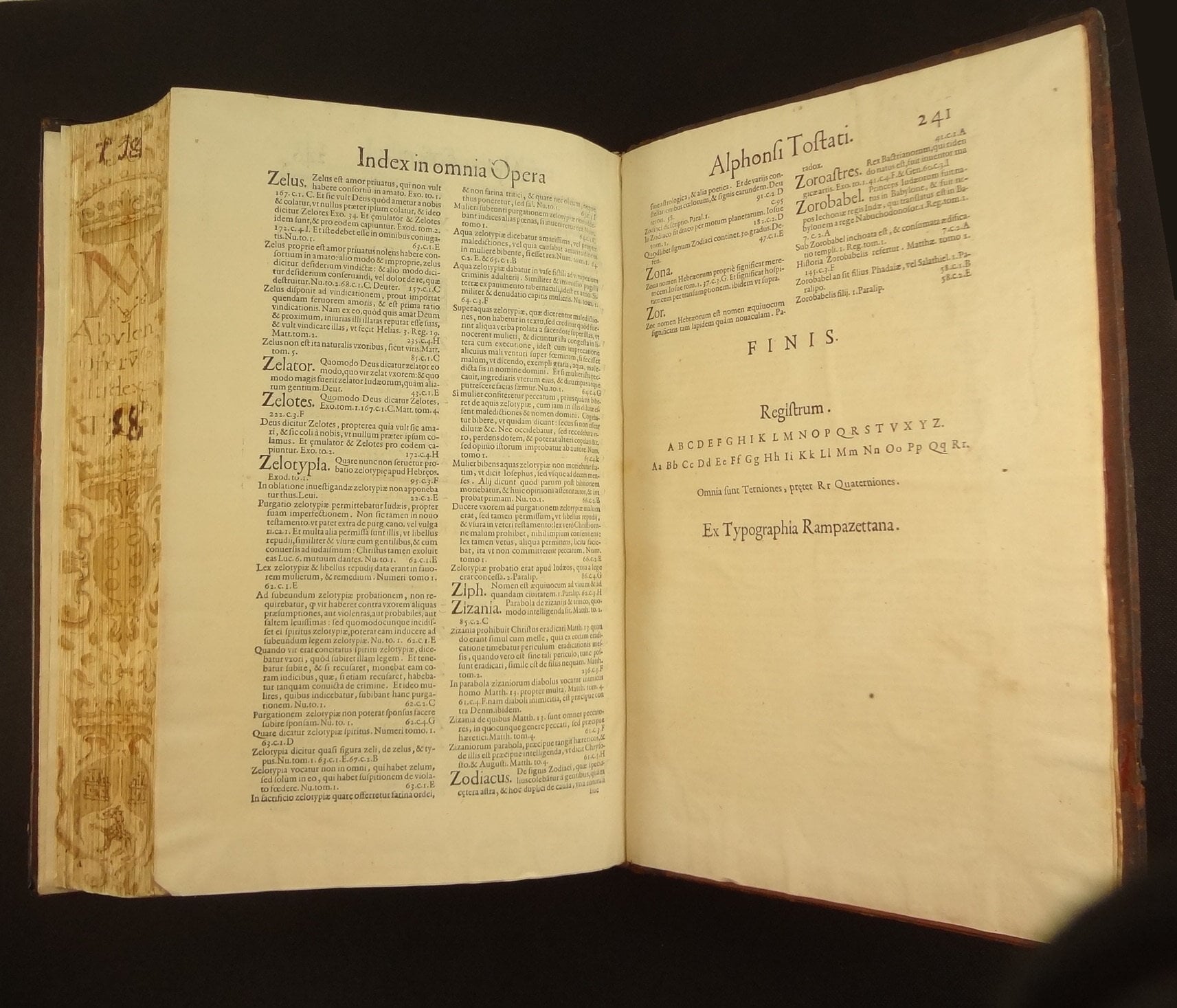 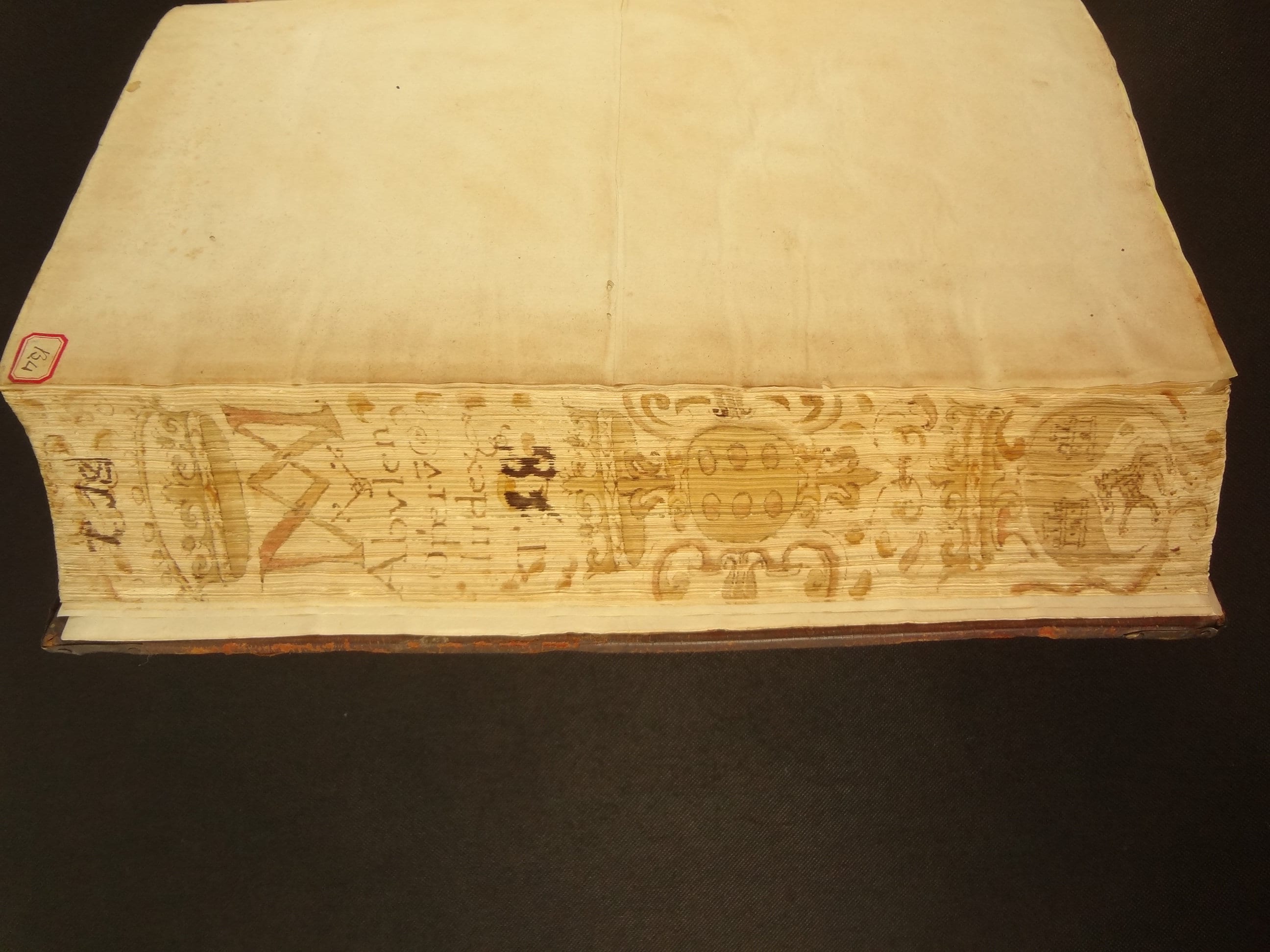 A beautiful un-molested un-restored oak-board blind-tooled calf binding with fore-edge painting (of the Marques de Astorga) holds this late 16th century Sessa family printing of the 15th century theologian Alonso Tostado. This volume is the Index, for the complete works of Tostado.

This binding hails from the beautiful Marques de Astorga's library. This family founded libraries in their homes and local convents, with beautiful architecture, and with the fore-edges of the books richly decorated with their coats of arms to face outward.

This binding has the Bishop Sancho Davila Toledo's shield at the center, the brother of the Marques de Astorga. This book was likely in his library, and at his death (1625) went to his nephew Antonio Sancho Davila, also a Marques.

I'm unsure when, in this family chronology, the fore-edge was painted because it doesn't match the early 16th century examples exactly (the first Marques to collect lived 1535-1616). Along the fore-edge, the Davila coat of arms is correct (middle) , but the Toledo arms (castles and lion rampant) seems to be a different variant than that used earlier in the 16th century (checkered shield) but matches that still used by Toledo. The "MA" monogram at the top seems to refer to Marques de Astorga. The "Tom. 18" refers to which volume, in the Sessa 1596 printing of the works of Tostado, this is. The title is under the monogram, "Abulen Opru Index".

Robin Halwas posted a wonderful history of the Astorga library to the web, and it can be found at their website; it highlights that many of the finest libraries in the world (BL, Houghton, etc.) have Astorga examples.

Alonso Tostado (1410-1455) was a Spanish theologian, councillor of John II of Castile and briefly bishop of Ávila. A leading scholar of his generation, he is particularly known as an early theorist on witchcraft; in his De maleficis mulieribus, quae vulgariter dicuntur bruxas (1440) he defended the possibility of flying witches based on biblical exegesis.

By great application joined to an unusually brilliant mind and an extraordinarily retentive memory, he accumulated such a vast store of knowledge that his contemporaries styled him a wonder of the world. At 22 he began to lecture on a wide variety of subjects to large audiences attracted by his learning.

Besides a Spanish commentary on the chronicles of Eusebius and other minor works, he wrote commentaries on the historical books of the Old Testament as far as Second Chronicles, and on the Gospel according to St. Matthew. These are diffuse, containing many digressions on dogmatic and other subjects.

Sessa was an important family of printers active in Venice since the beginning of the 16th century. The Sessa used a charming printer's mark, variously elaborated, depicting a cat with a mouse in its mouth. A version adorns the top of the first page of the Inferno in the 1578 edition and includes the motto "Dissimilium in Fida Societas" (a partnership that is unequal in trust -- referring to the cat and mouse of the printer's device).

In 1596 the Sessa family published the complete works of Tostado.

This volume, although bearing the Sessa printer's mark, was subcontracted to the Venetian printer Domenico Niccolini da Sabbio, and Francesco Rampazetto, as evidenced by the colophons (part 1 and 2).

See pictures. Vintage patina, with the pleasing look of history. Leather crazed (cracking). Joints cracked, cords/hinges hold boards. Spine rubbed much. Edge/joint wear. Corner guards in place, but one broken. Leather straps at fore-edge expired. Chipping at top of spine and a little at bottom. A little worming to front and rear inner-board, which went into facing blank endpapers but not far into the text block.