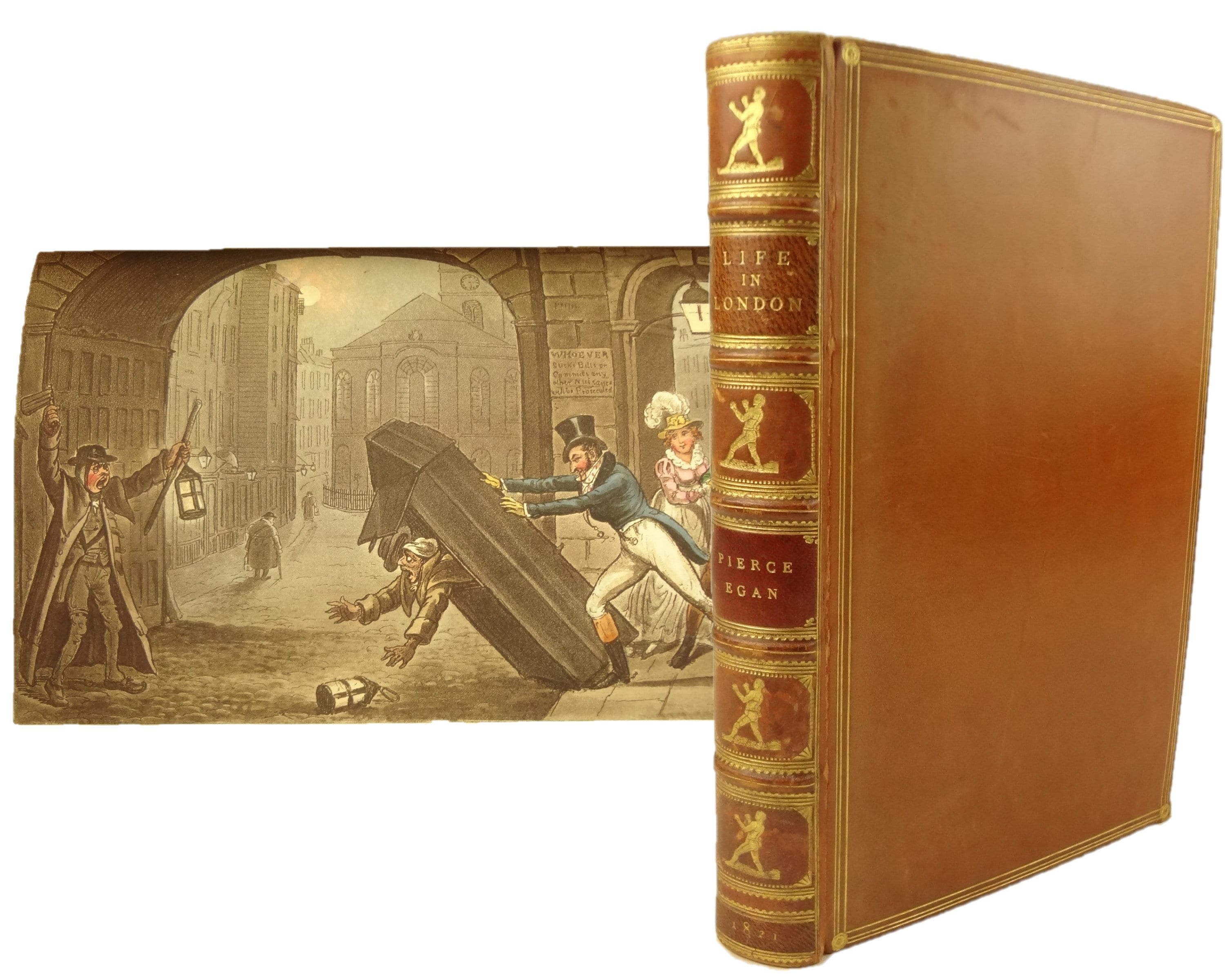 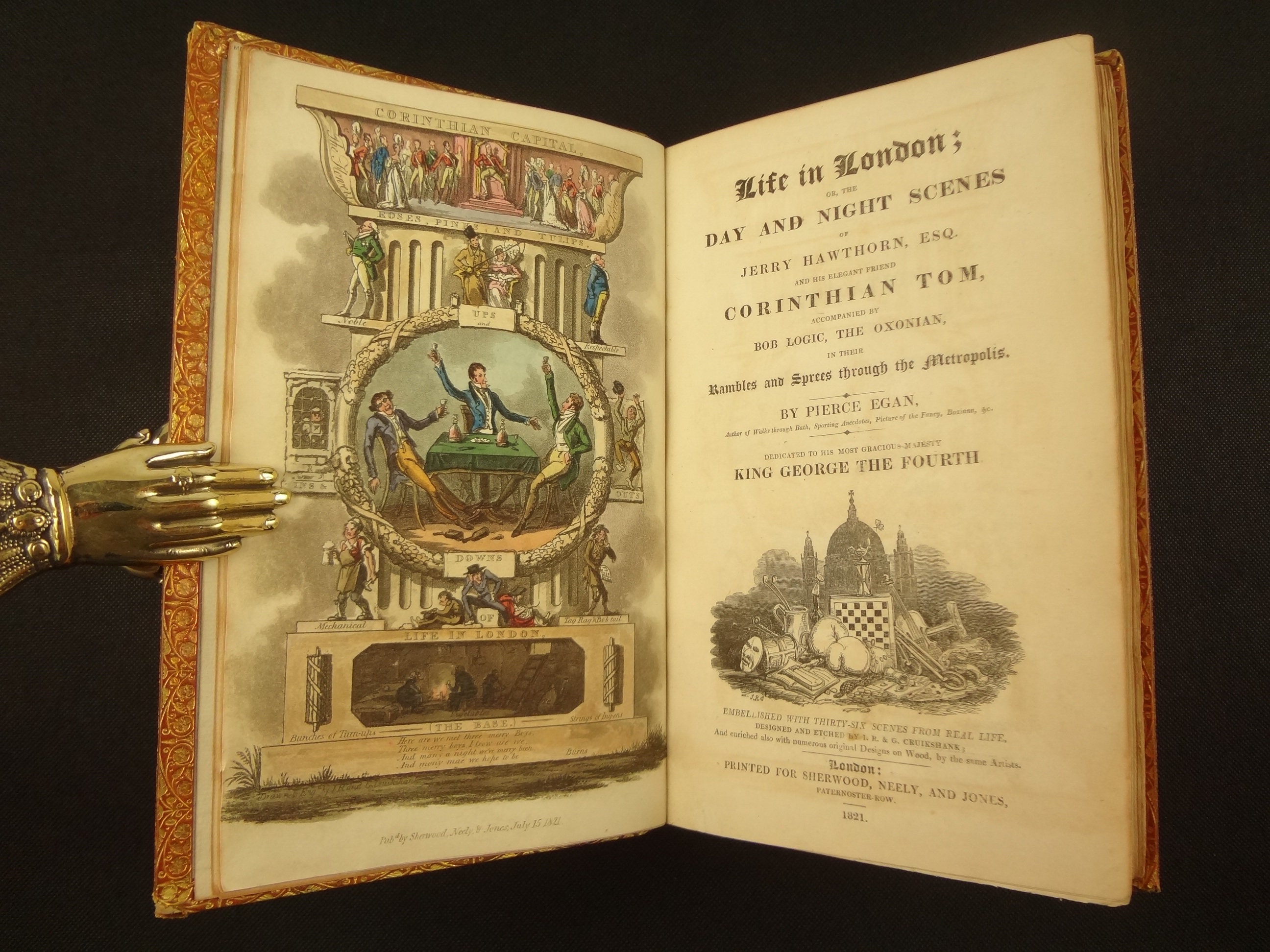 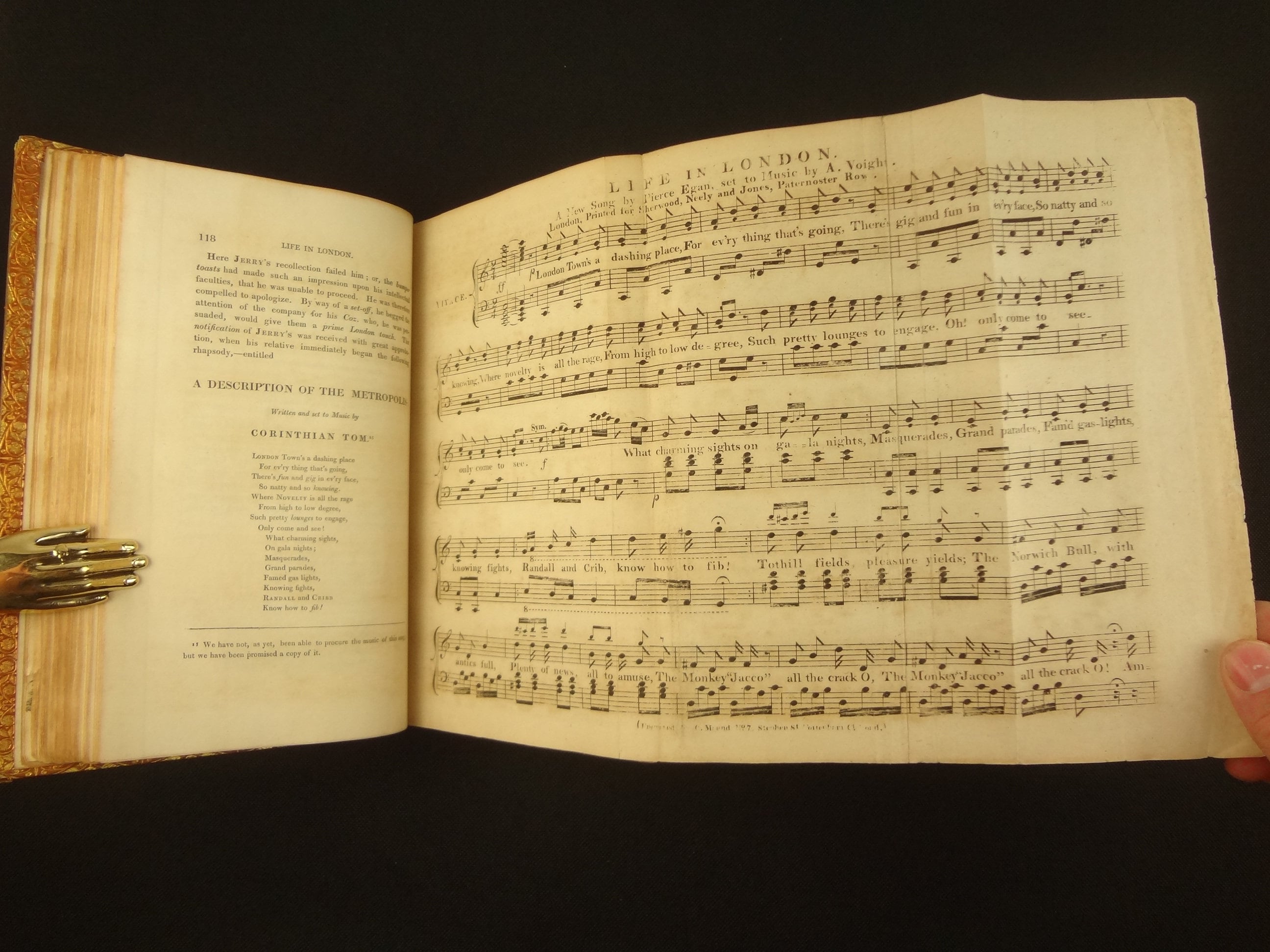 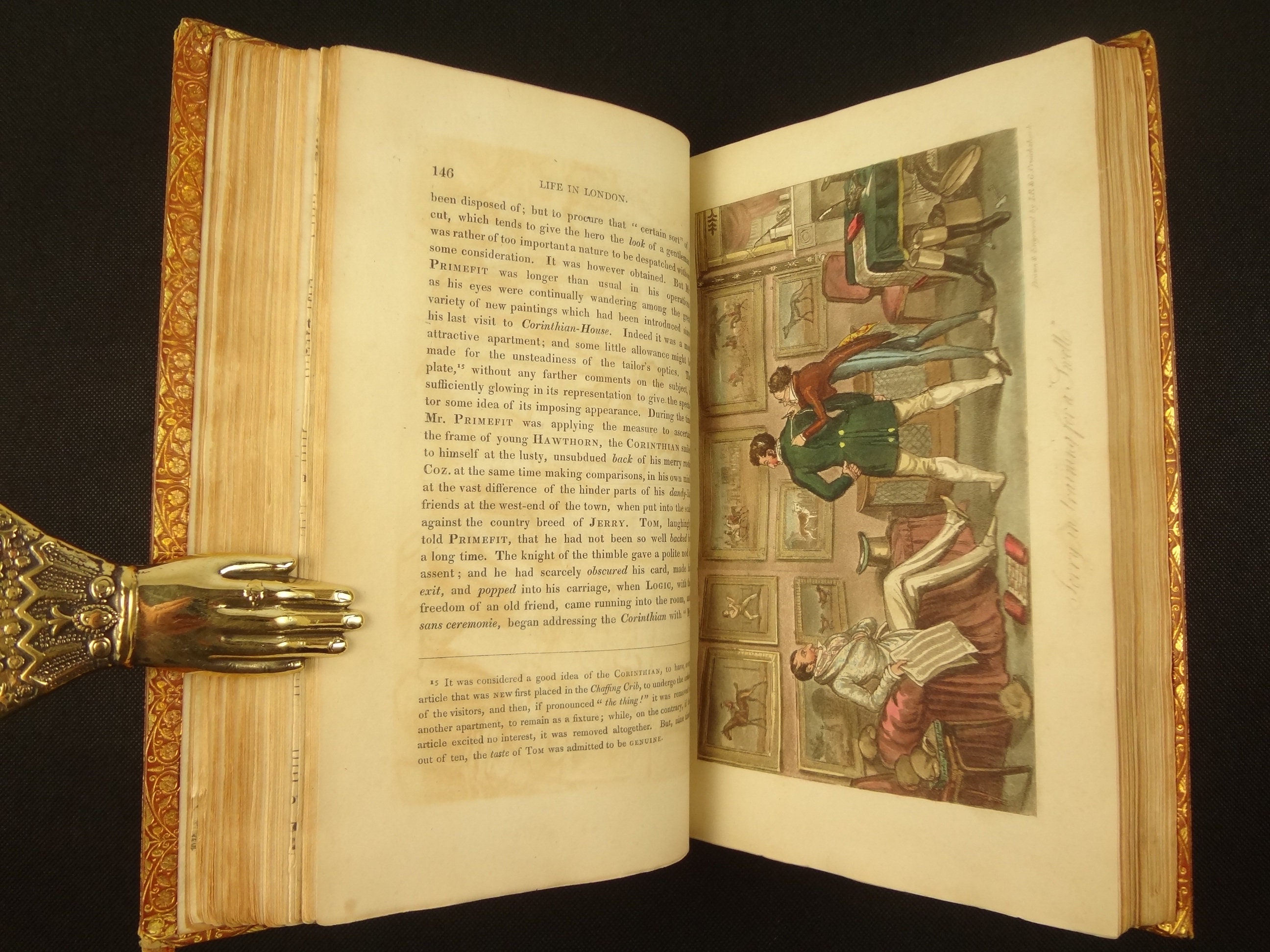 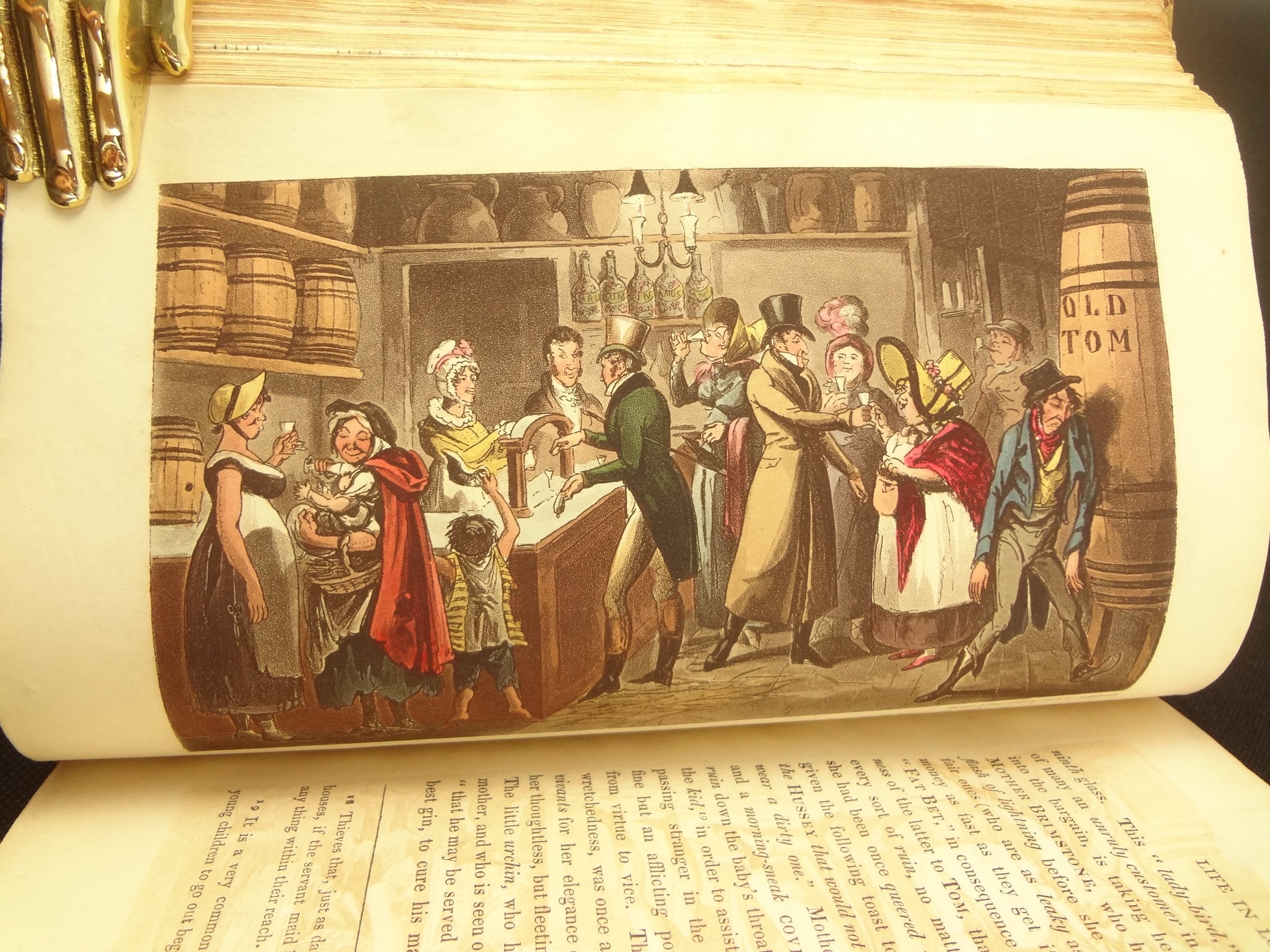 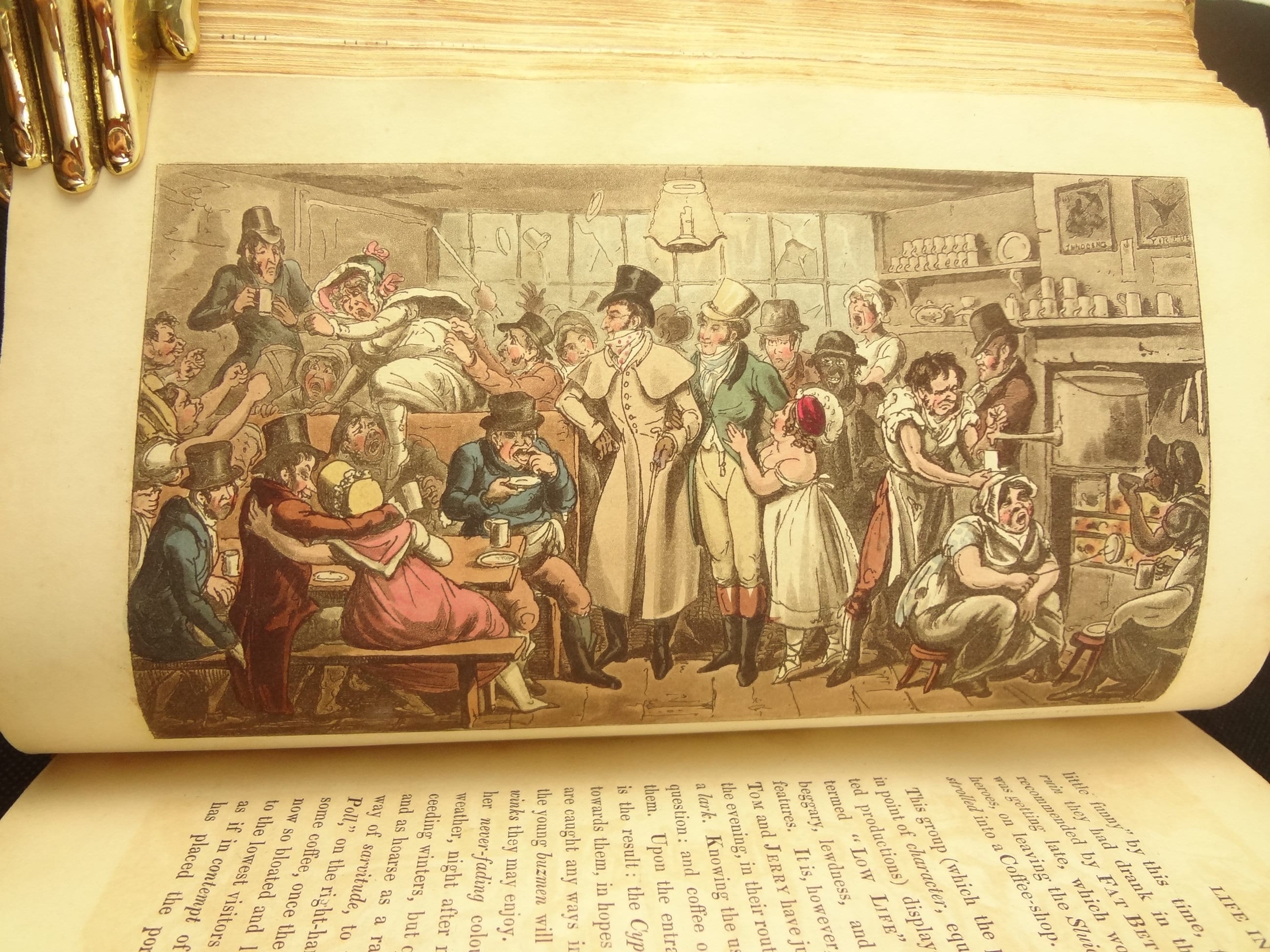 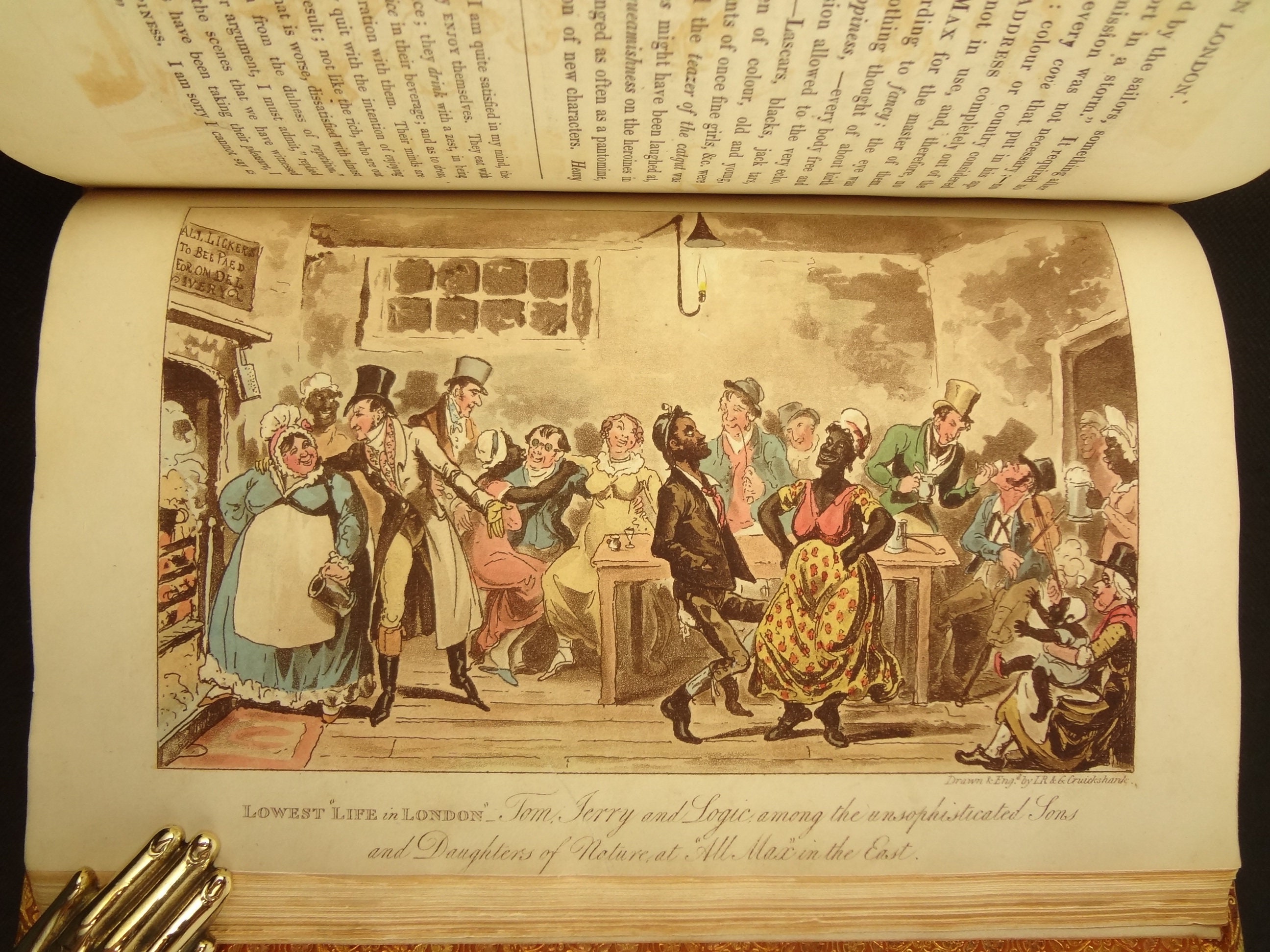 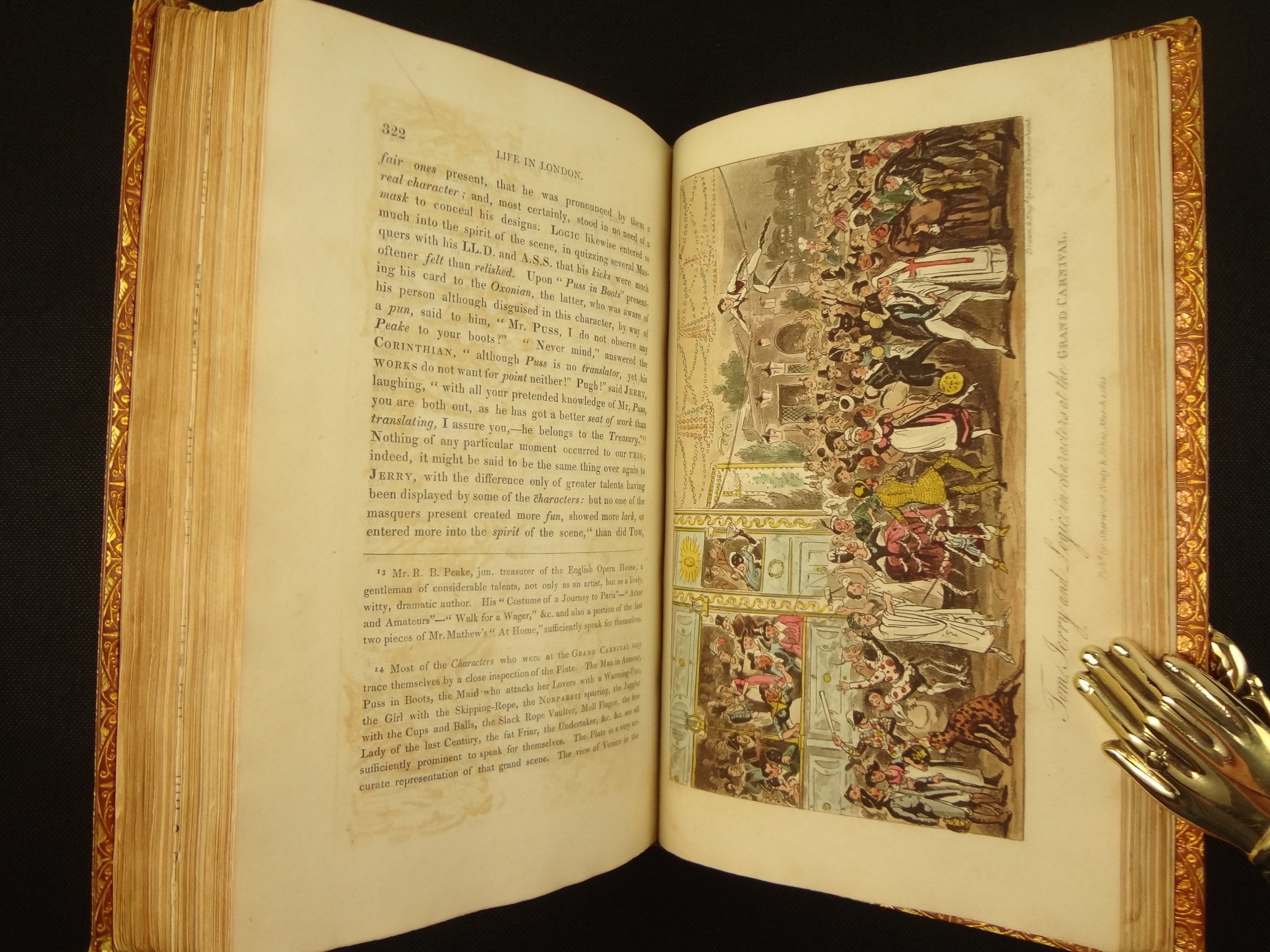 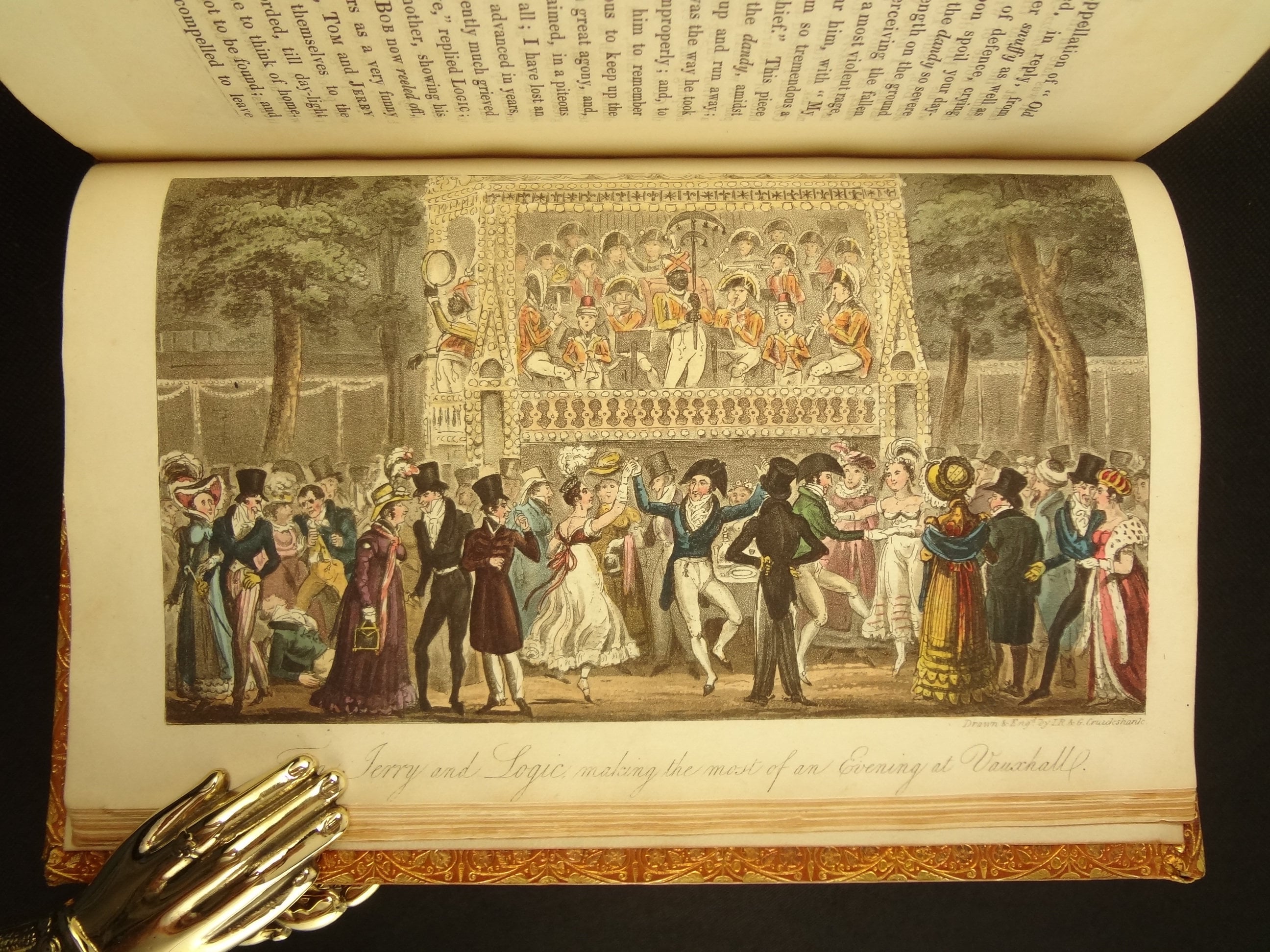 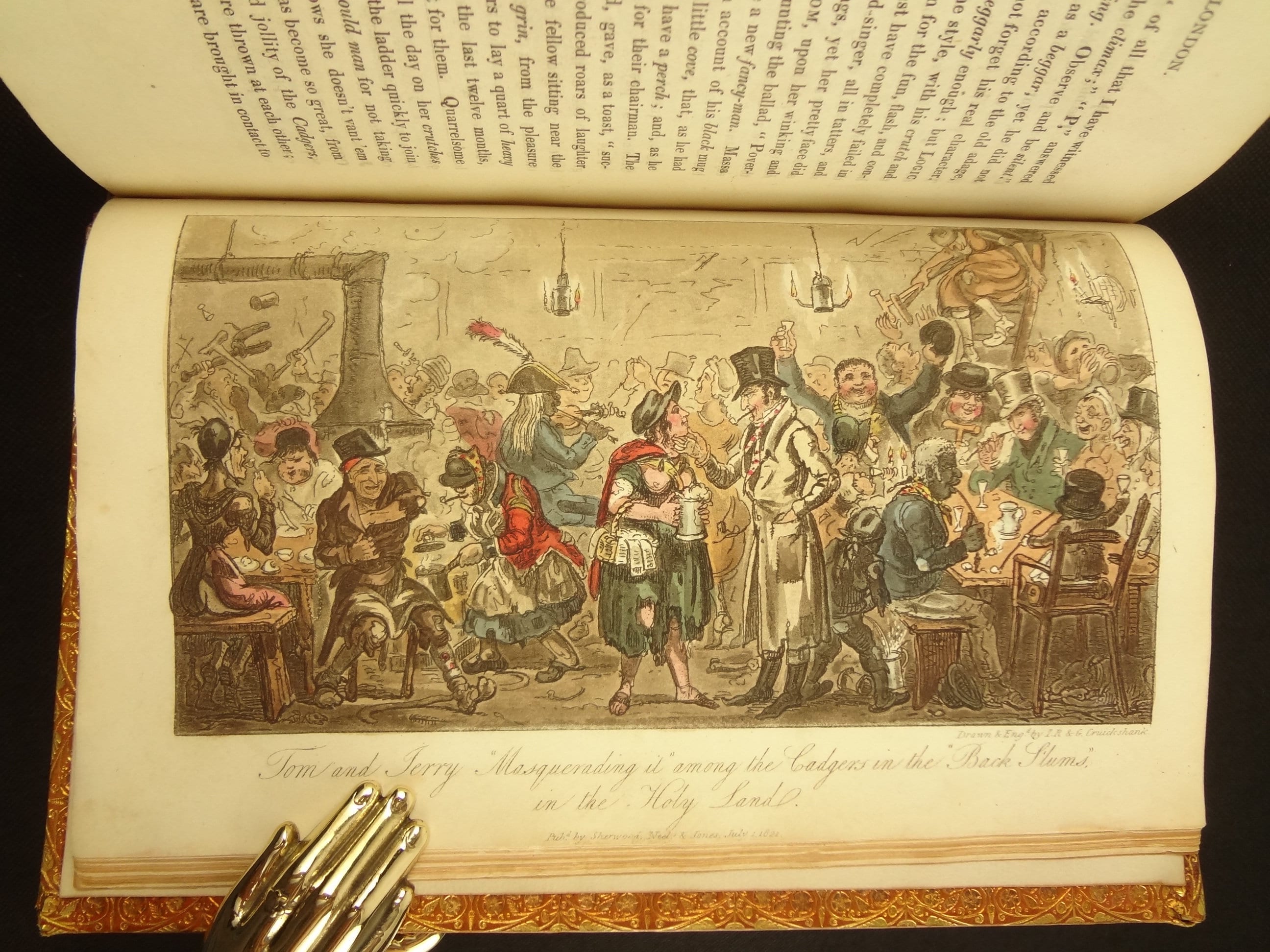 First edition of Pierce Egan's humorous Life in London; Dan and Night Scenes... illustrated by George Cruikshank (and his brother Roger & father Isaac), and bound by Morrell (stamped on endpaper). This is a humorous, fun and boundary-pushing work, highlighting illicit activities in 19th century London. The choice of the bitingly humorous Crankshaft (and brothers) to illustrate was the perfect pairing.

This copy is complete with all thirty-six aquatint hand-colored "scenes" and three fold-out pages of music.

A prudish Victorian review may best speak to the humor and moral state of this work - “This Egan was an unmitigated Bohemian , and we believe that he may be credited with the invention of that style of pugilistic reporting dialect..., certainly made his mark , and a dirty one , on the English language - which language he was never able to write grammatically . His principal work , Life in London , is beneath contempt as a literary work . It is totally deficient in plot ; his heroes have no character in any sense of the word ; and their adventures are mere disconnected scenes and pictures of every conceivable vice , and immorality . There is not a trace of wit or humour or comedy in their sayings , and their doings are a succession of adventures — mere animalism , as is an enjoyment of life in the coarsest shape .” Saturday Review: Politics, Literature, Science and Art v.29, p. 829, June 25, 1870


Earlier State of the 1st Edition -

According to the Cruikshank cataloguer Cohn, in his 1914 work, he lists this as entry 250 and explains that the publisher being on the lower left of the 1/2 title verso (rear), and a footnote being on page 9, identifies this as an early second state of the 1st edition (the 1st, 1st did not have the footnote, although the publisher was off-center as in this copy). Other points include no page number on 1st sheet of music, and "good-bies" at 376.

See pictures. Some shelf wear, with corners rubbed and bumped. Joints rubbed, and front joint cracked 3 cm. at top. Rubbing at spine. A little sunning with light ghosting of books shelved next to it. Turn-ins have ghosted flyleaves. Occasional fox spot throughout. Light toning to pages, as typical of paper of this period. "King George the fourth" written in ink, but faded at back (recto) of frontis plate. Plates have ghosted facing pages throughout, including title page. Occasional thumb (or fox spot result). Someone has repaired the occasional page edge tear, and music fold-out edge/crease tears expertly. Bookseller notes on recto of rear flyleaf, "Morrell Binding, 1st ed, with very fine plates and music. 11/46".