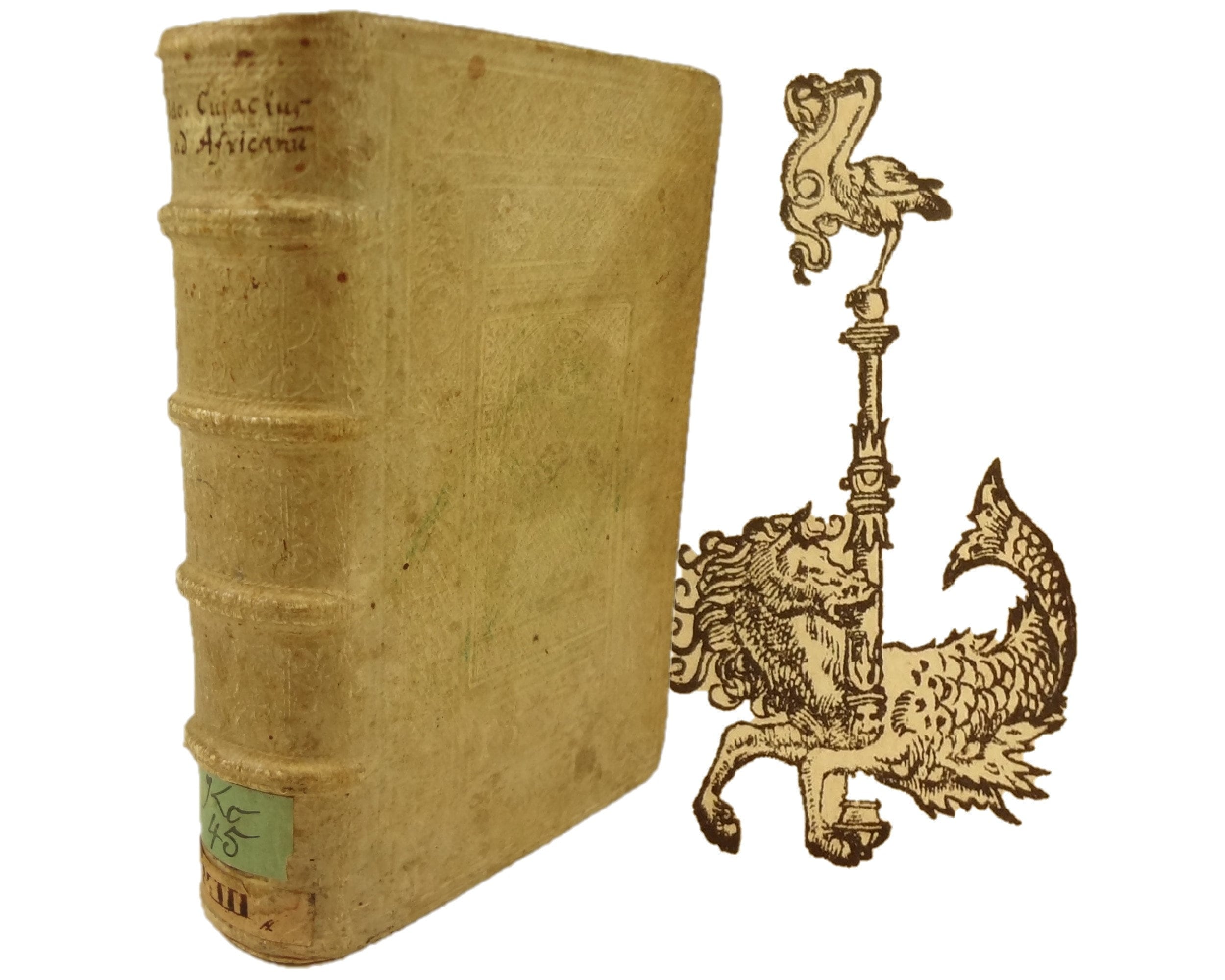 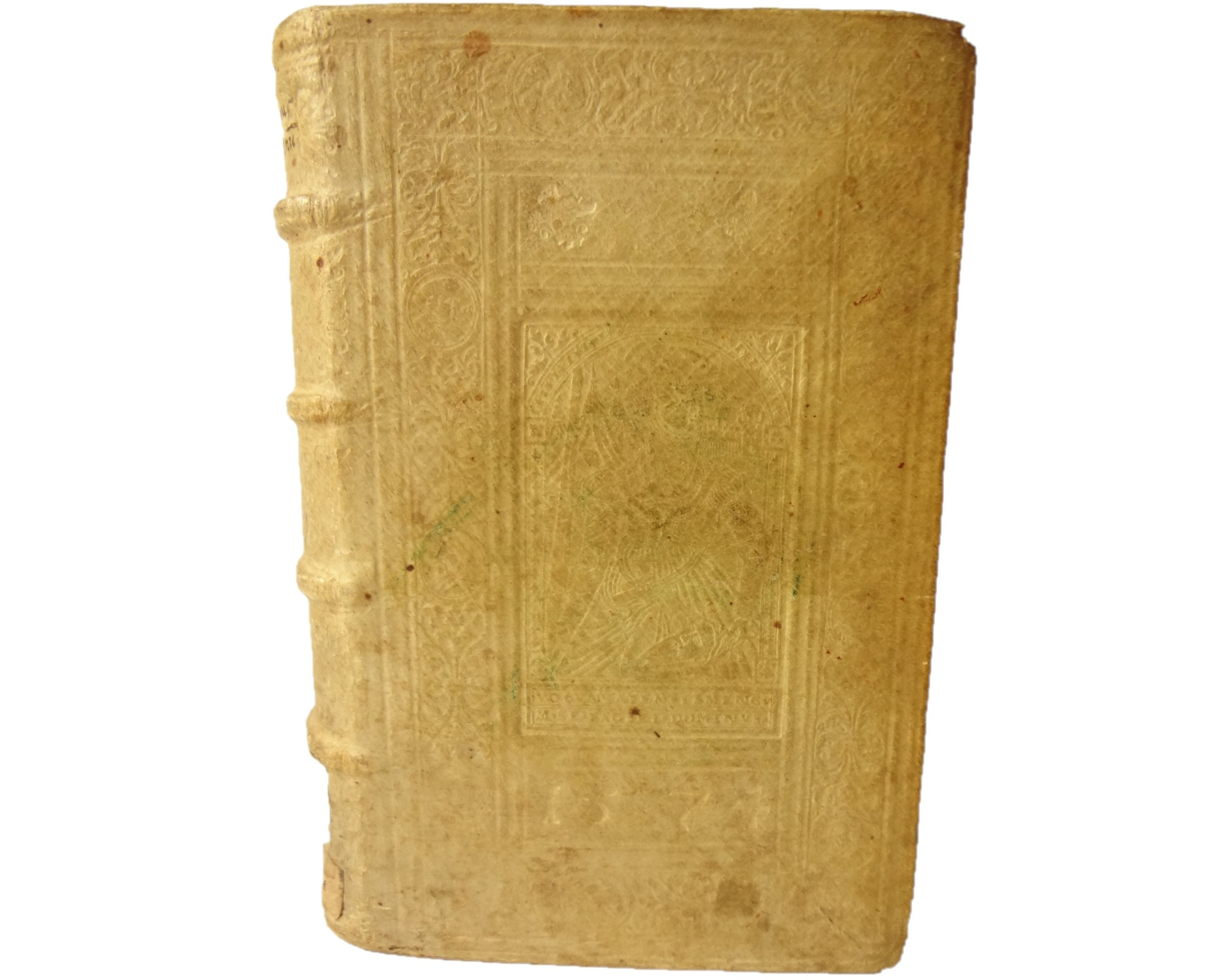 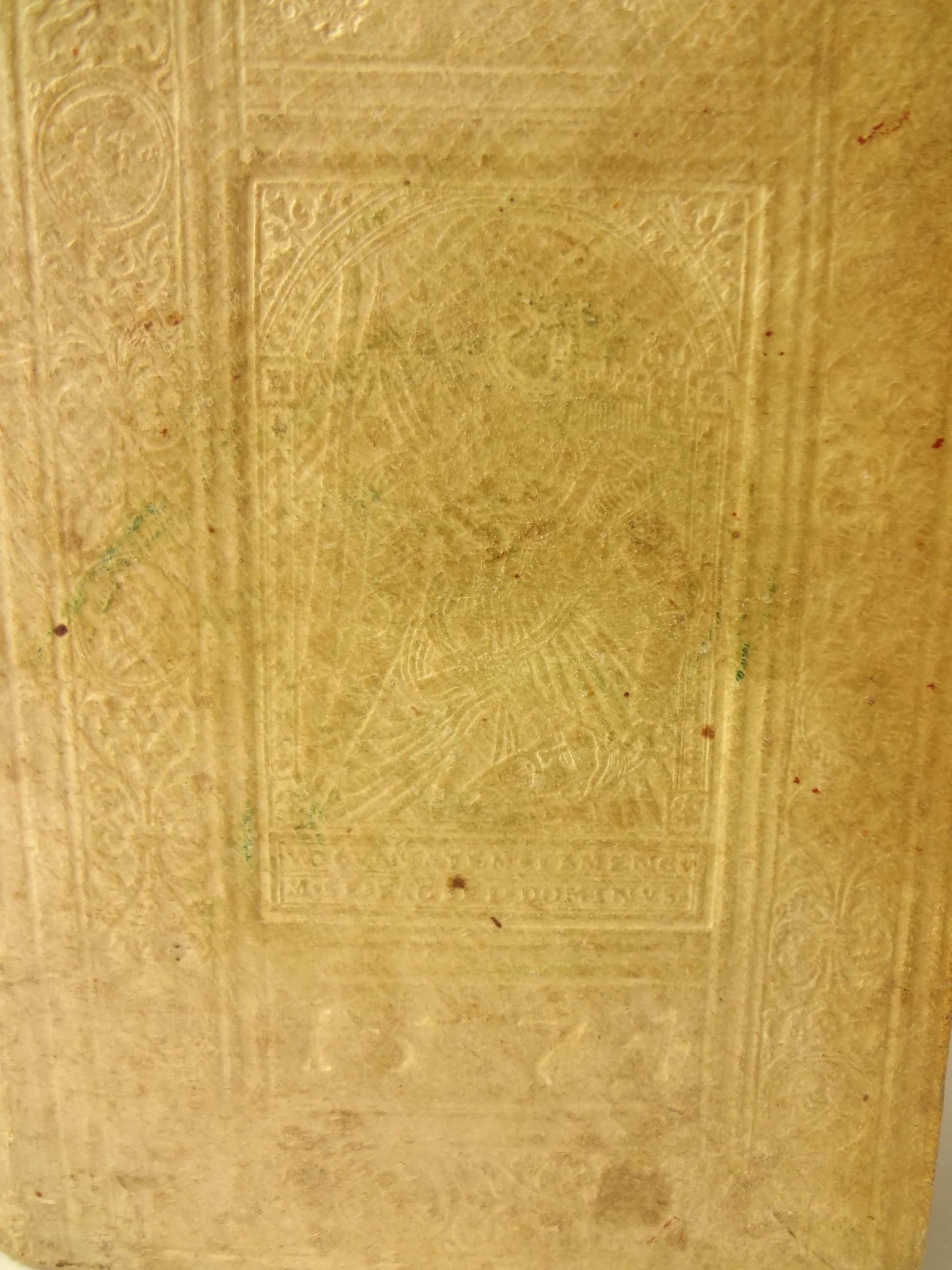 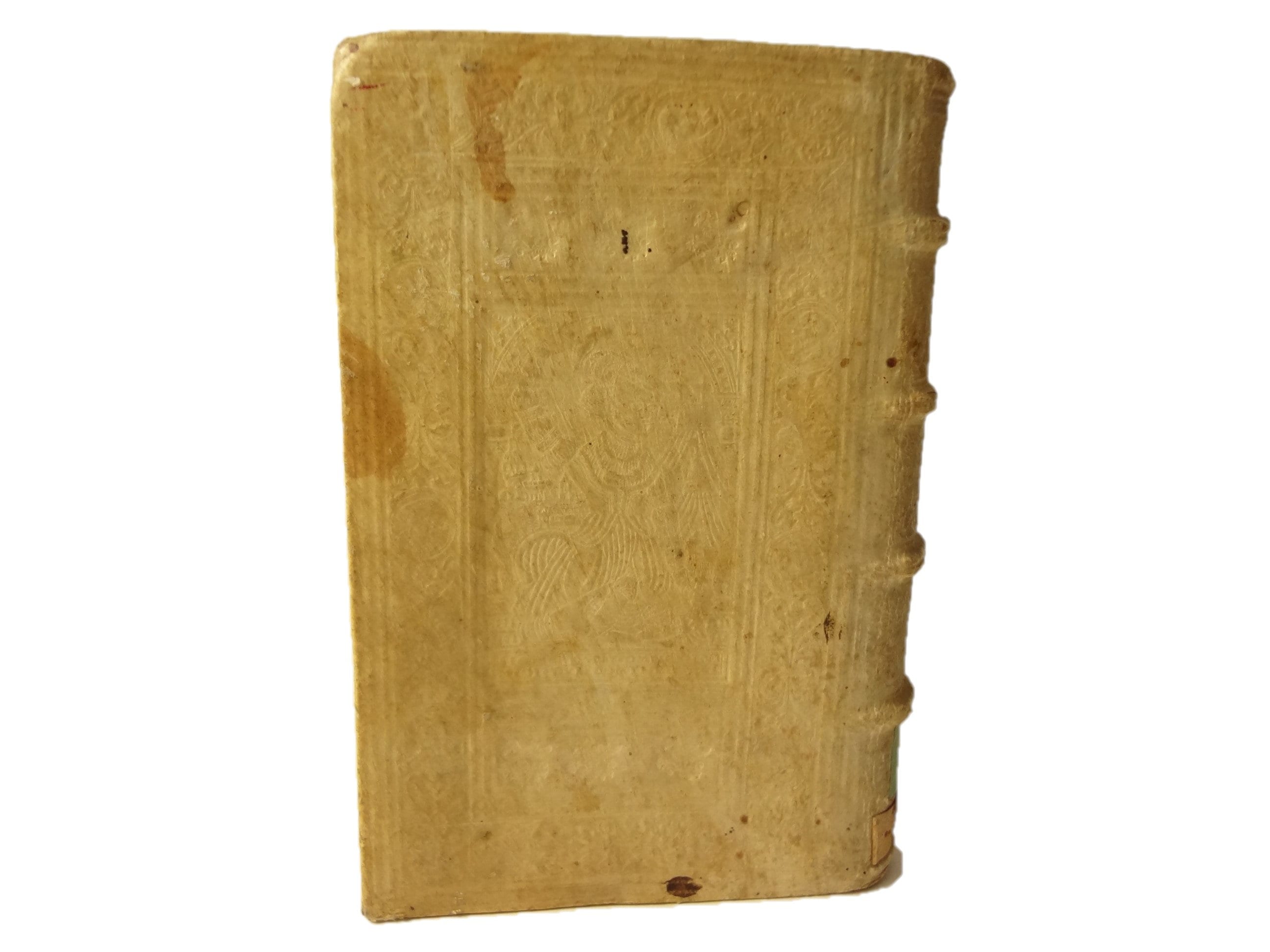 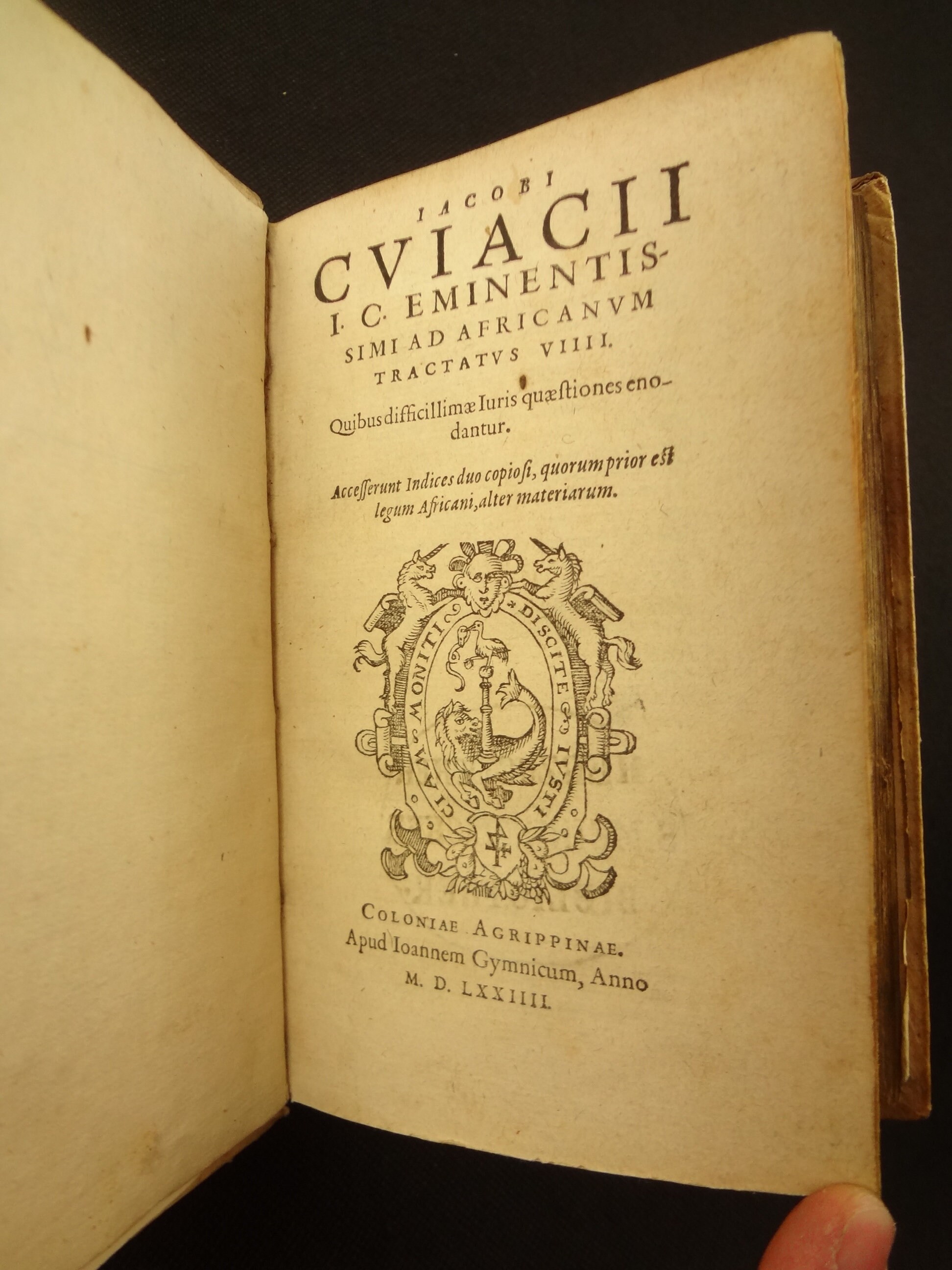 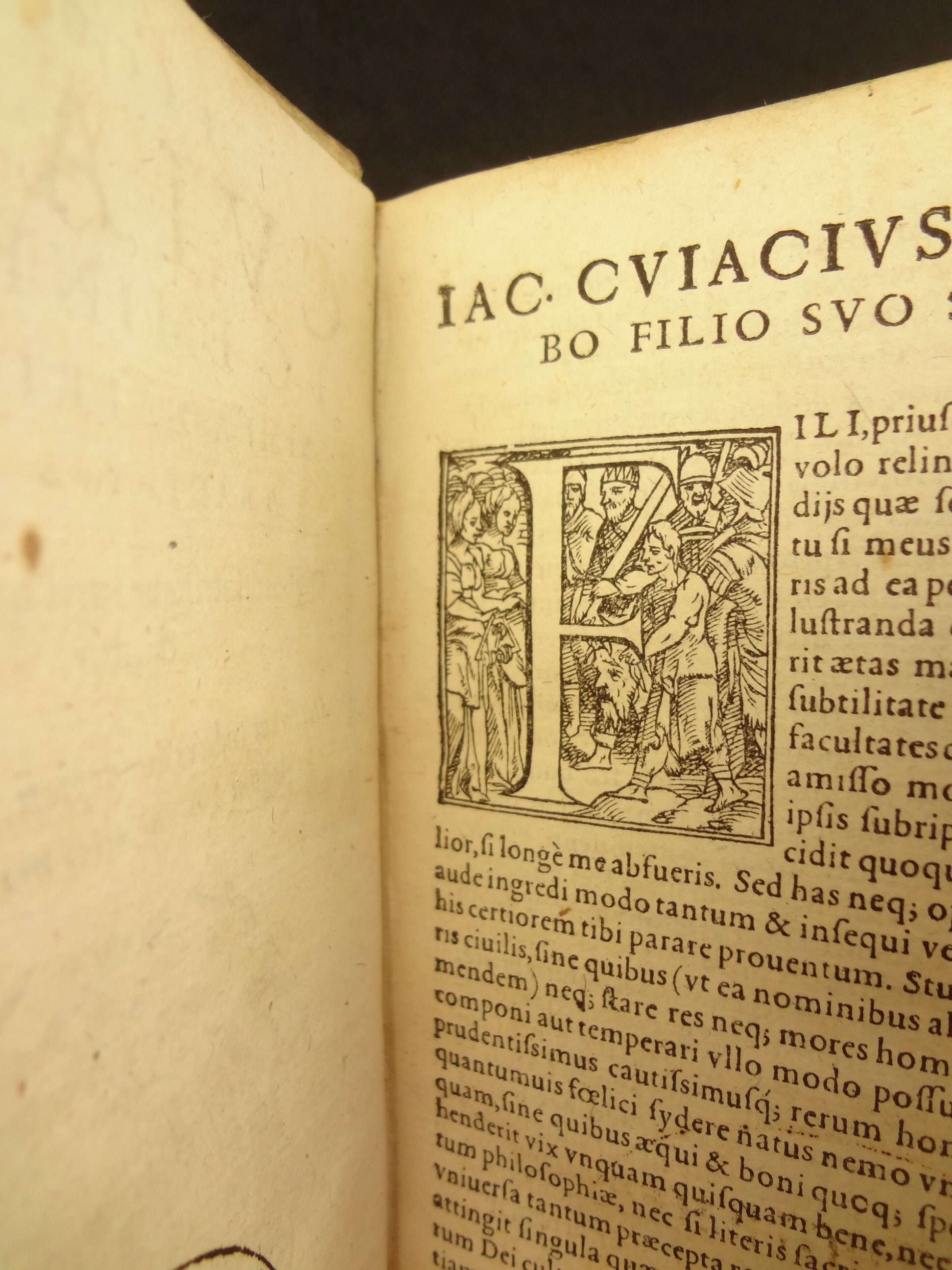 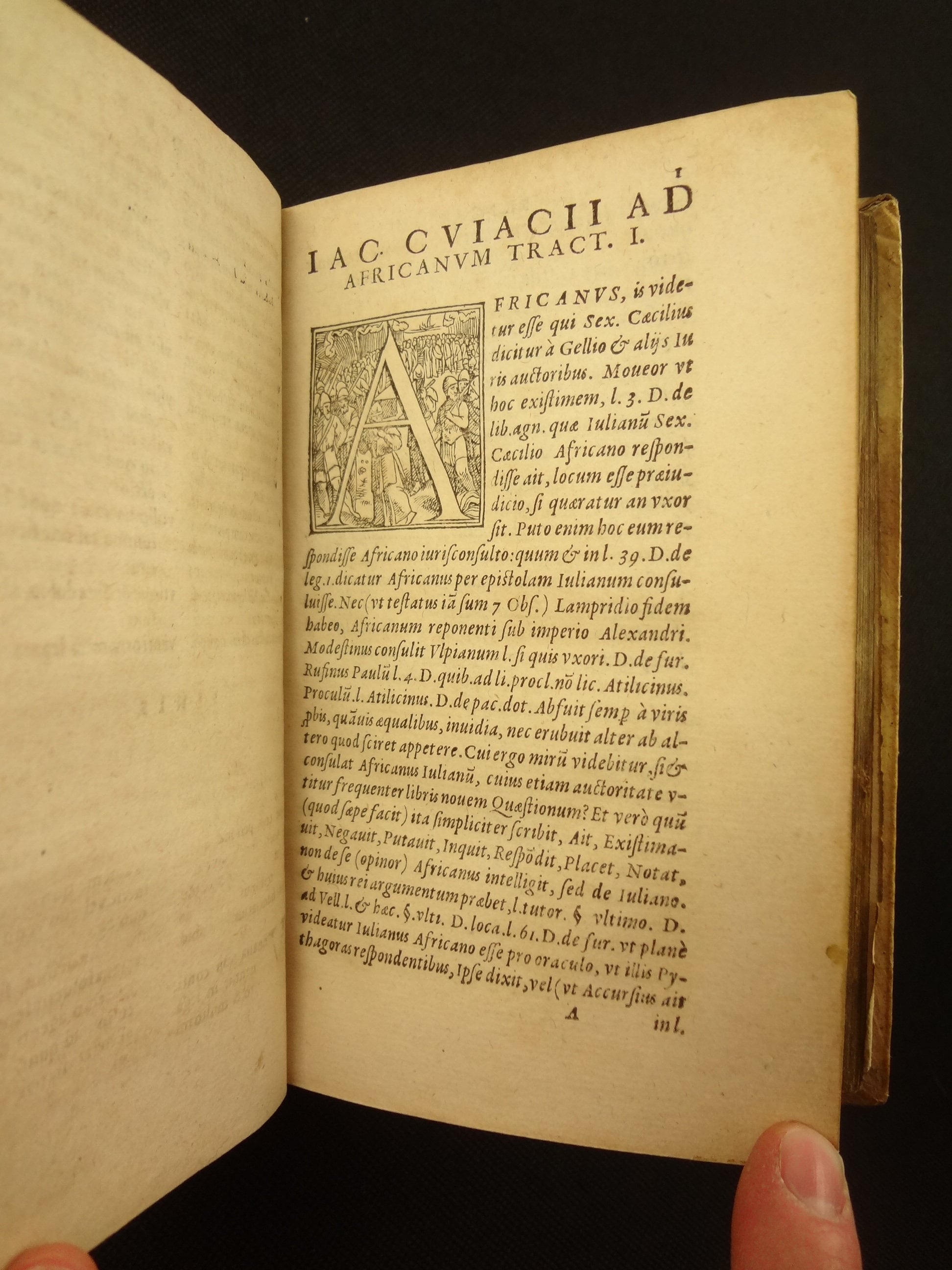 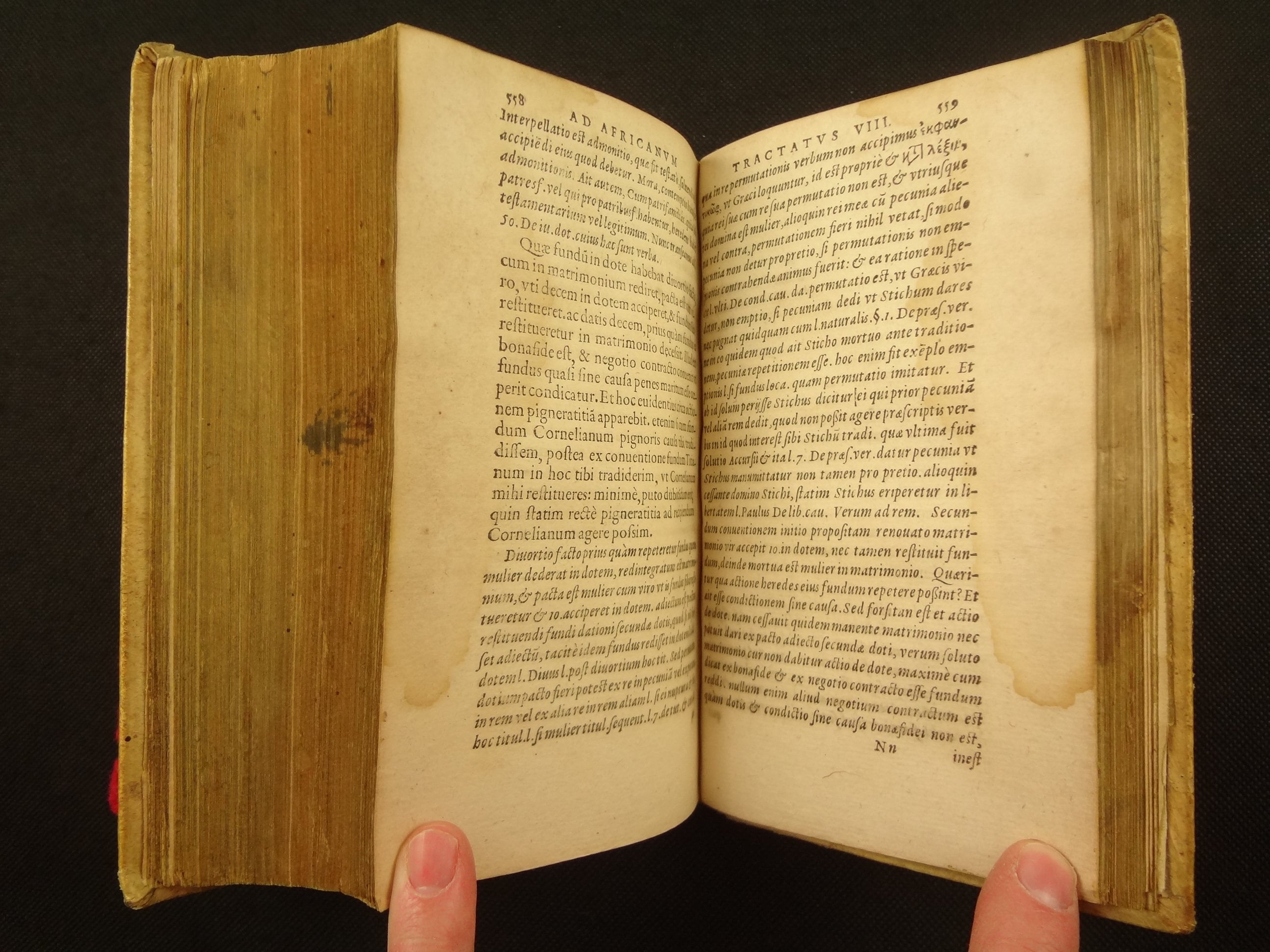 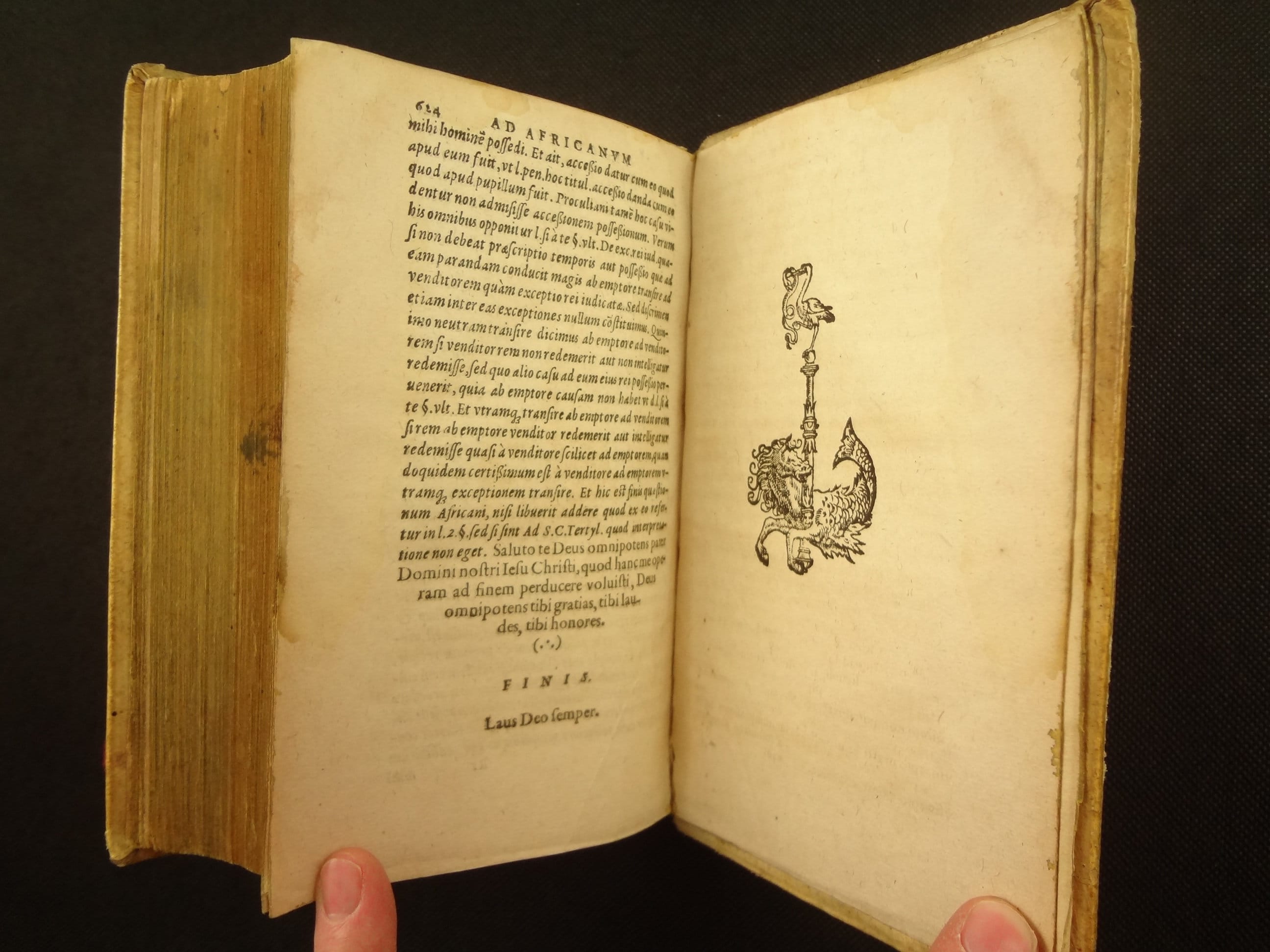 Judith and Jael decorate the contemporary dated blind-stamped pigskin binding housing this 1574 printing of Eminentissimi ad Africanum Tractatus VIIII by Jacques Cujas. Cujas was a French jurist and considered one of the greatest representatives of legal humanism. He devoted his efforts to understanding, without prejudice, Roman law.

This work expands on the remains of Africa'nus by Caeci'lius, a Roman Jurist, who was influenced by, and commented on, Julianus' rhetoric. "The remains of Africanus have been admirably expounded by Cujas." - A Dictionary of Greek and Roman Biography and Mythology, Smith, v1, p56, 1902.

The Judith and Jael binding is a notable and important 16th century binding. The Cujas work was published and bound in Germany, which in 1574 was still reeling with The Reformation; Judith and Jael were used (by both sides, but predominantly the Protestants) to represent fighting oppression; Judith beheaded Holofernes, who was invading Israel, and Jael drove a stake through Sisera's temple, as he was also striving against the Israelites. During the 16th century people could relate to these old-testament heroines and their need to cavort with an oppressive enemy, but then violently overthrow them. The Grolier Club's wordpress blog has a delightful entry on these bindings, which I've tried to summarize here (poorly), titled Jael and Judith... by Meghan Constantinou.

Also, the Grolier article tracked twenty similar bindings; Jael and Judith bindings can be found at The Grolier, Victoria and Albert Museum, the Russian State Library, etc., and predominantly concentrate to between 1560 and 1580.

I logged into the German binding database (EBDB) and found these two designs most closely resemble those attributed to a shop in Stuttgart, W004454 (see tools p002893 and 4).

At the bottom of the Judith stamp is Psalm 145:19 roughly translated, "He fulfills the desire of those who fear him; he also hears their cry and saves them."

At the bottom of the Jael stamp is Judges 5:31, roughly translated, "So may all your enemies perish, o Lord!"

Unfortunately the Judith stamp is worn and you must look at it "just right" to see the image. A light cast side-long across the book leaves shadows in the impressions, and is the best setup for viewing worn stamps.

See pictures. Pigskin worn; impressions hard to see. Some stains to front board. Green mark on front board. Library tickets at bottom of spine (call numbers). Several other stains on rear board. Boards slightly splayed, pigskin binding a little tight.

Text block is mostly clean, with an occasional fox spot or thumb mark. The wash/color they applied to the text block occasionally left moisture marks right along the fore-edge. Corner tear at bottom of 551. Moisture mark along fore-edge, from 450 to rear, it does intrude a little into the text. Rear flyleaf loose at gutter from bottom to mid-book; also shelf numbers written at top of leaf. Despite condition notes, a contemporary "survivor" binding.