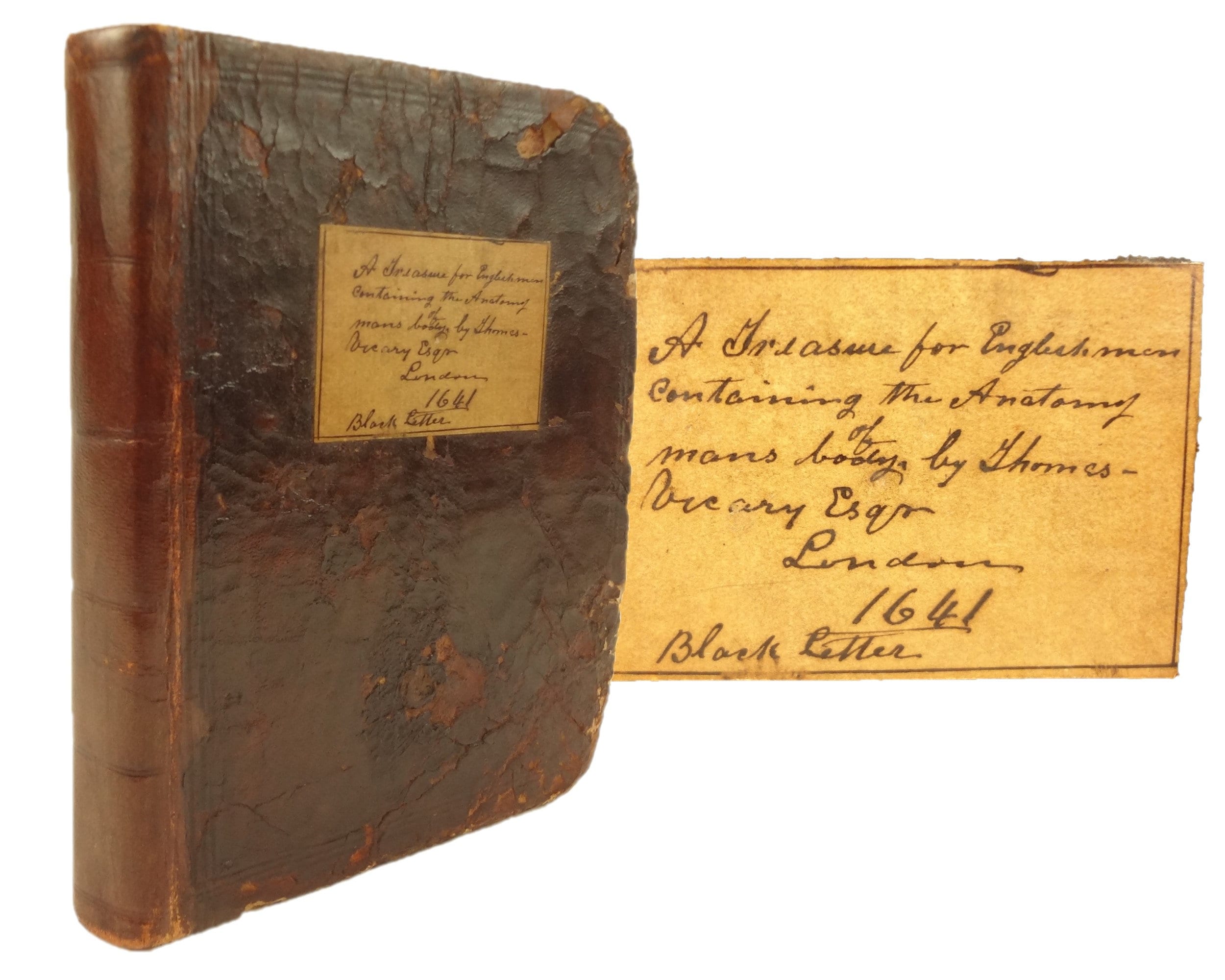 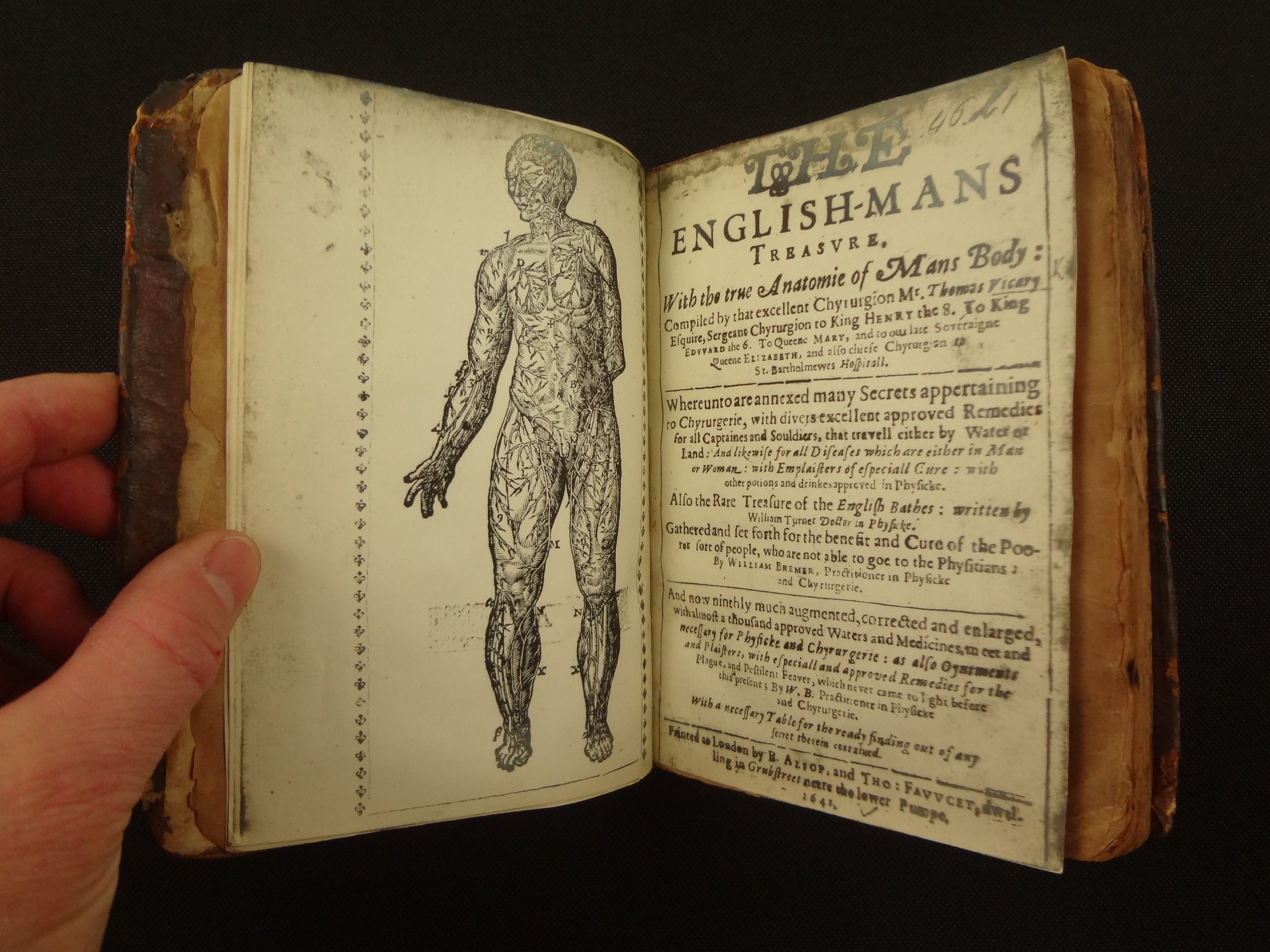 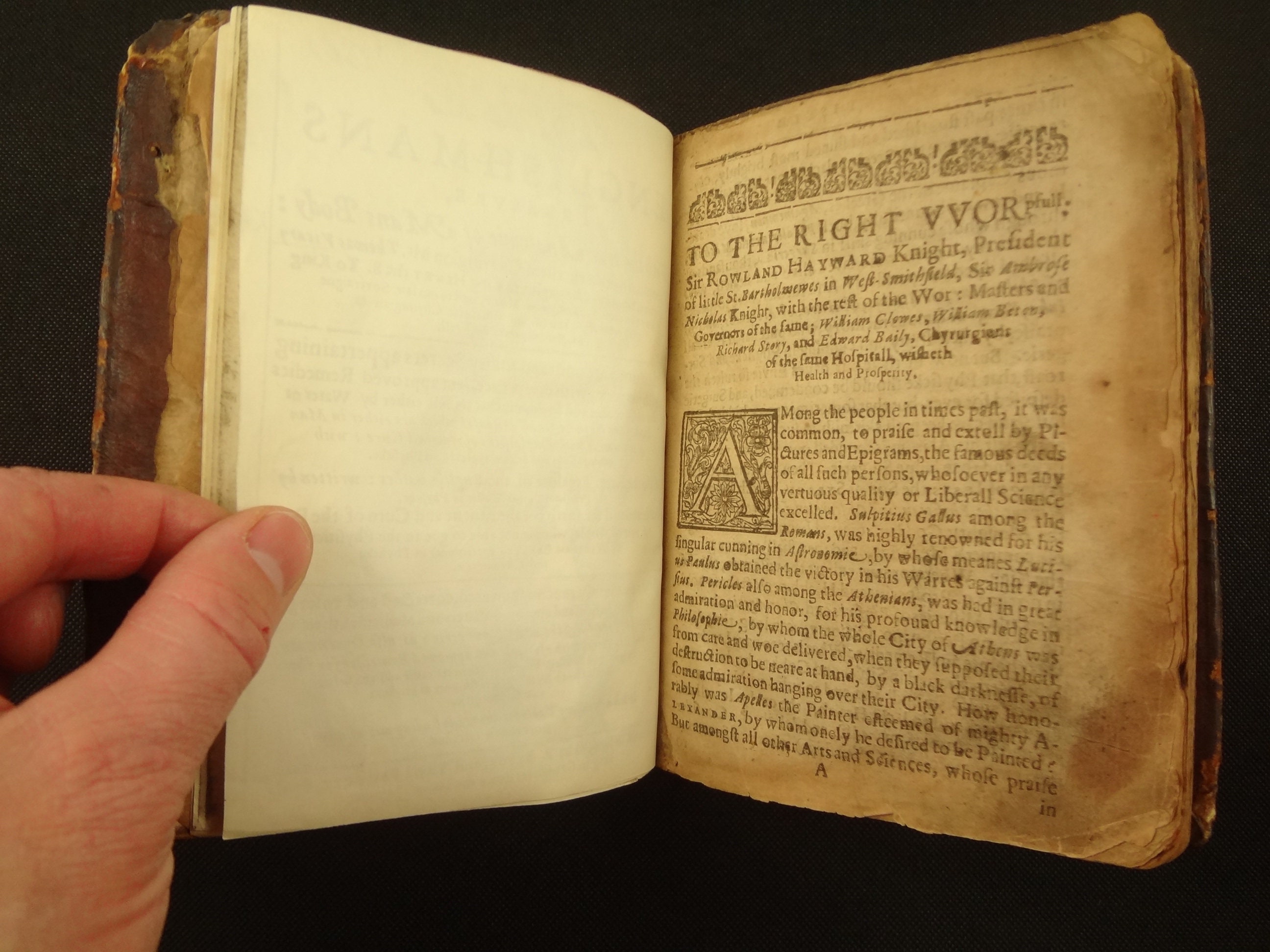 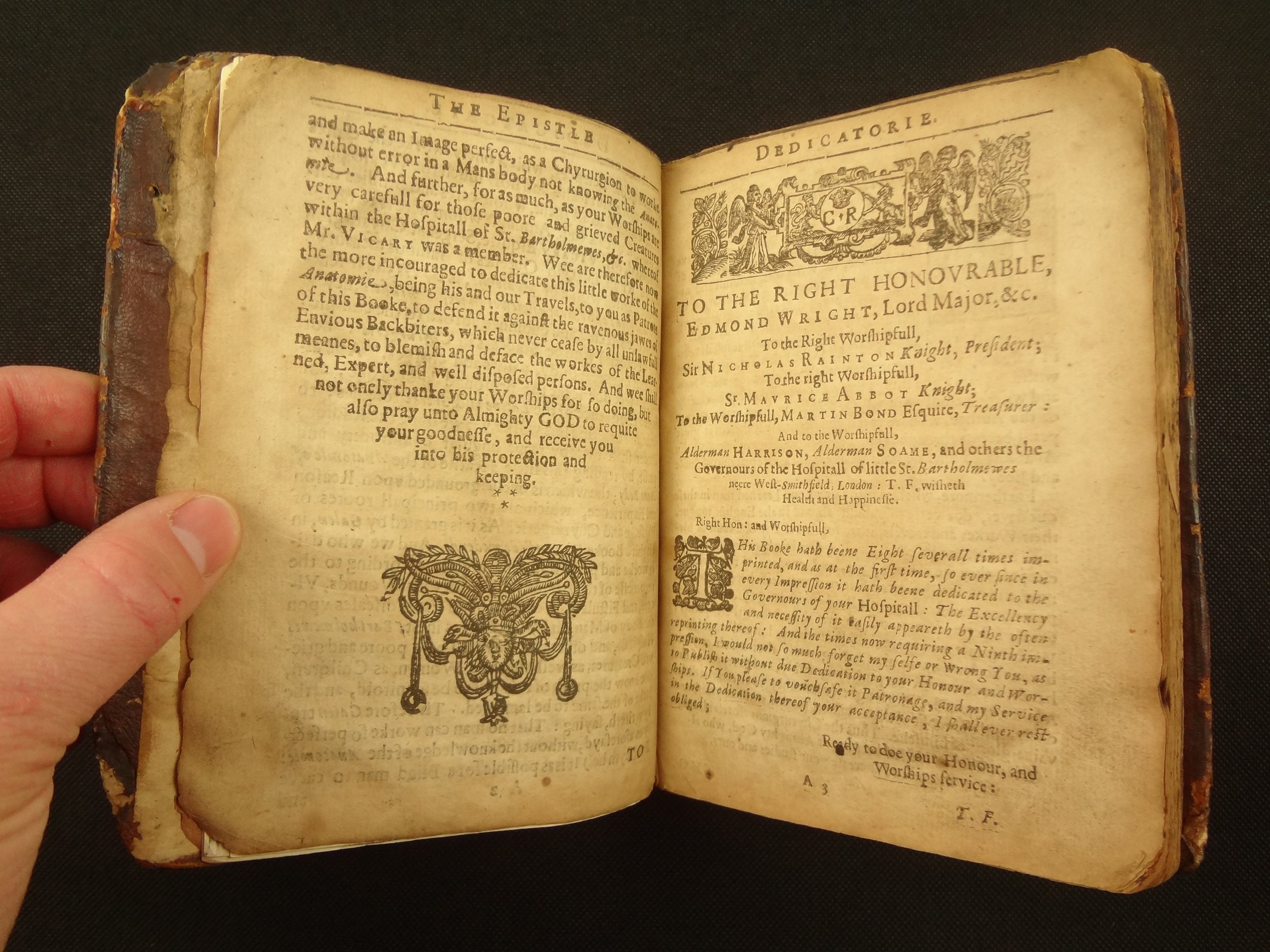 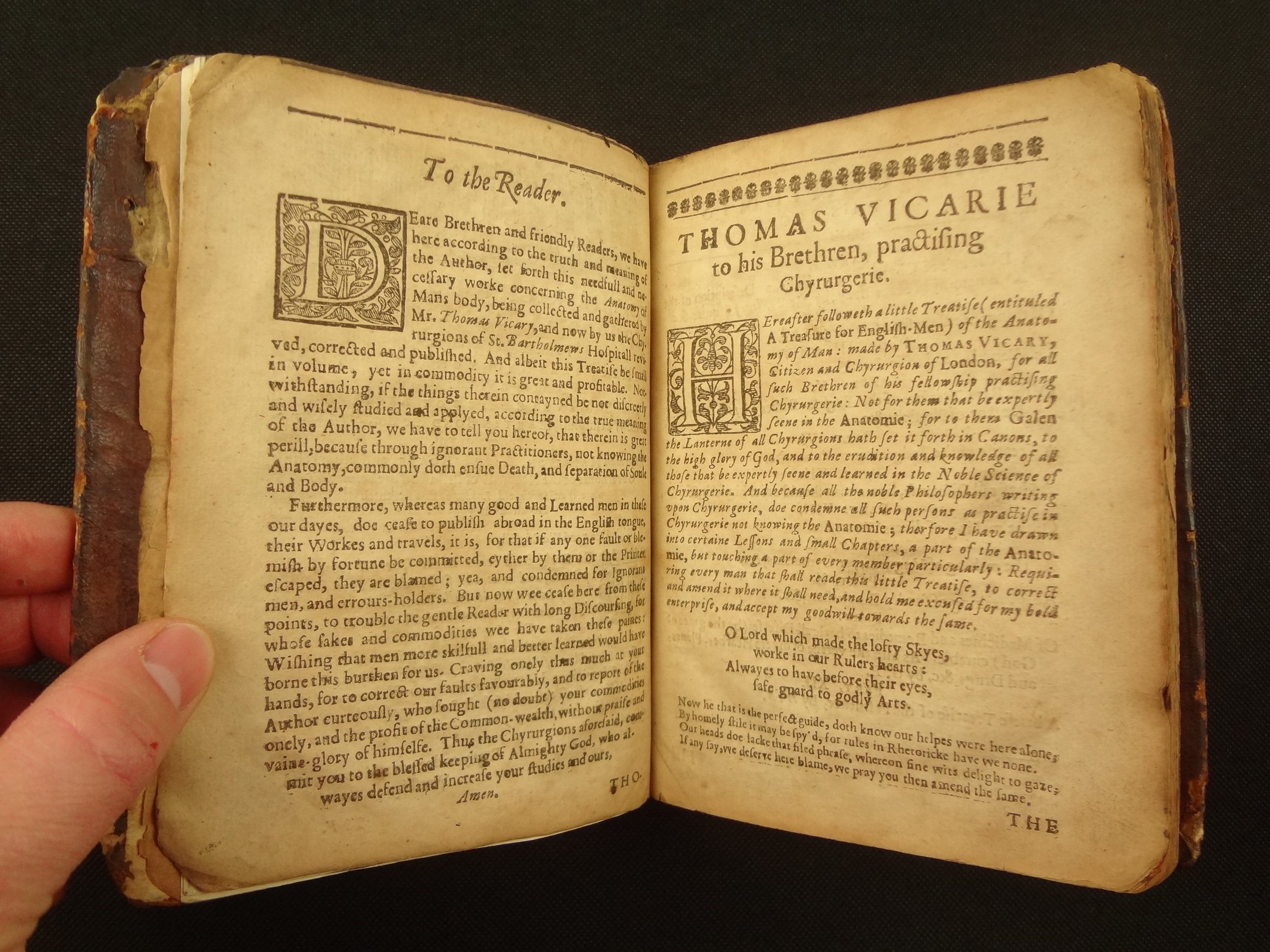 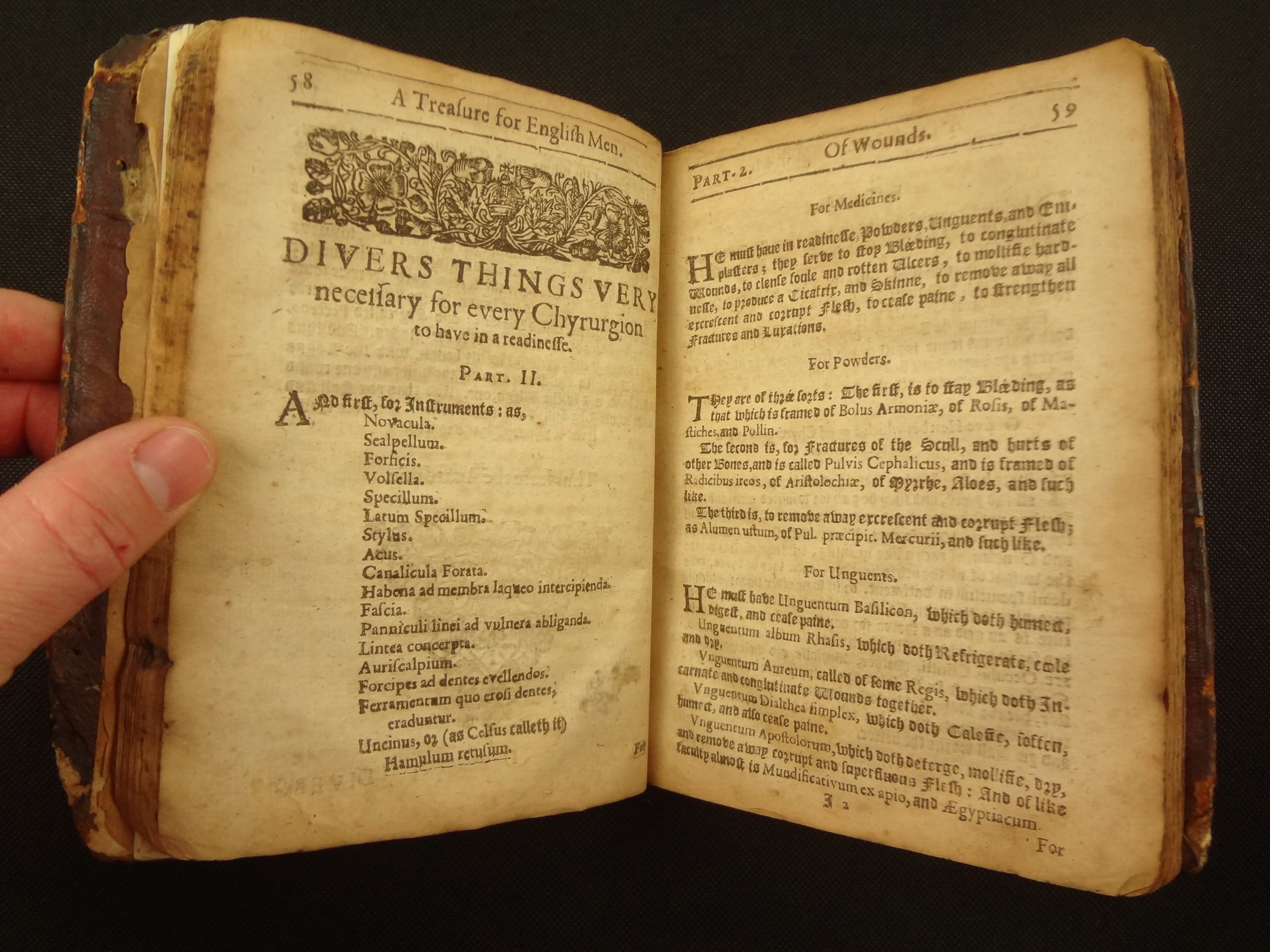 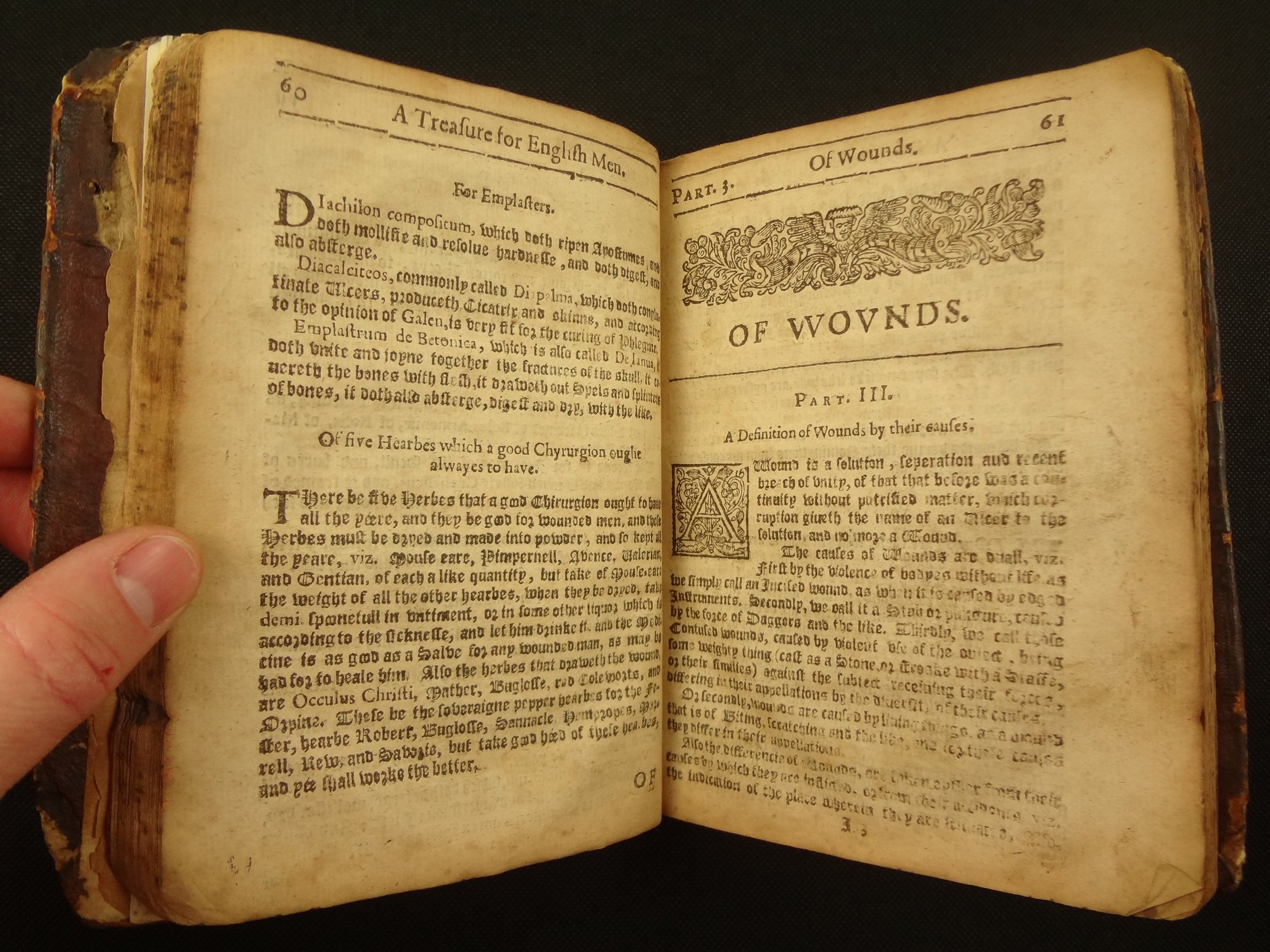 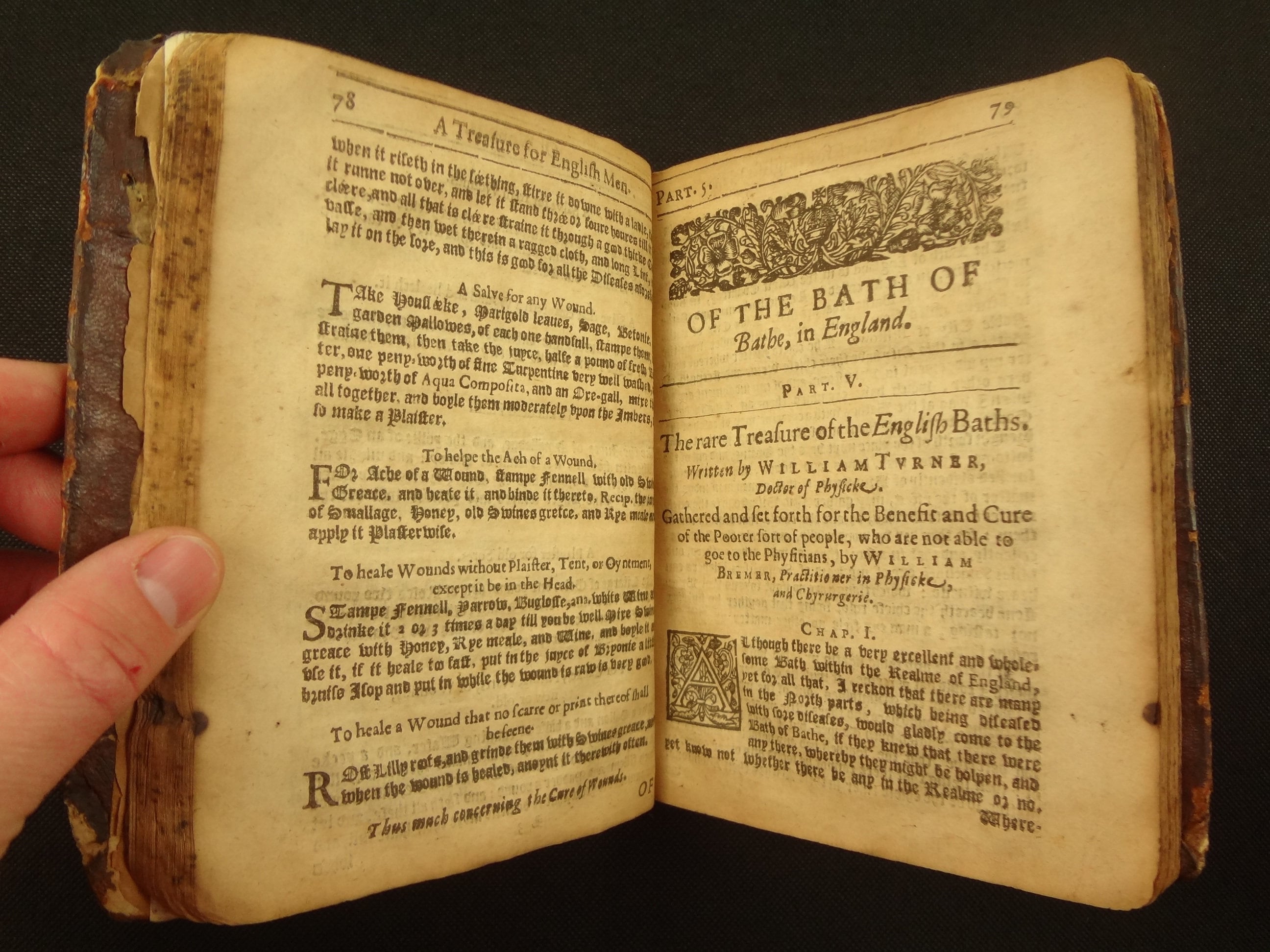 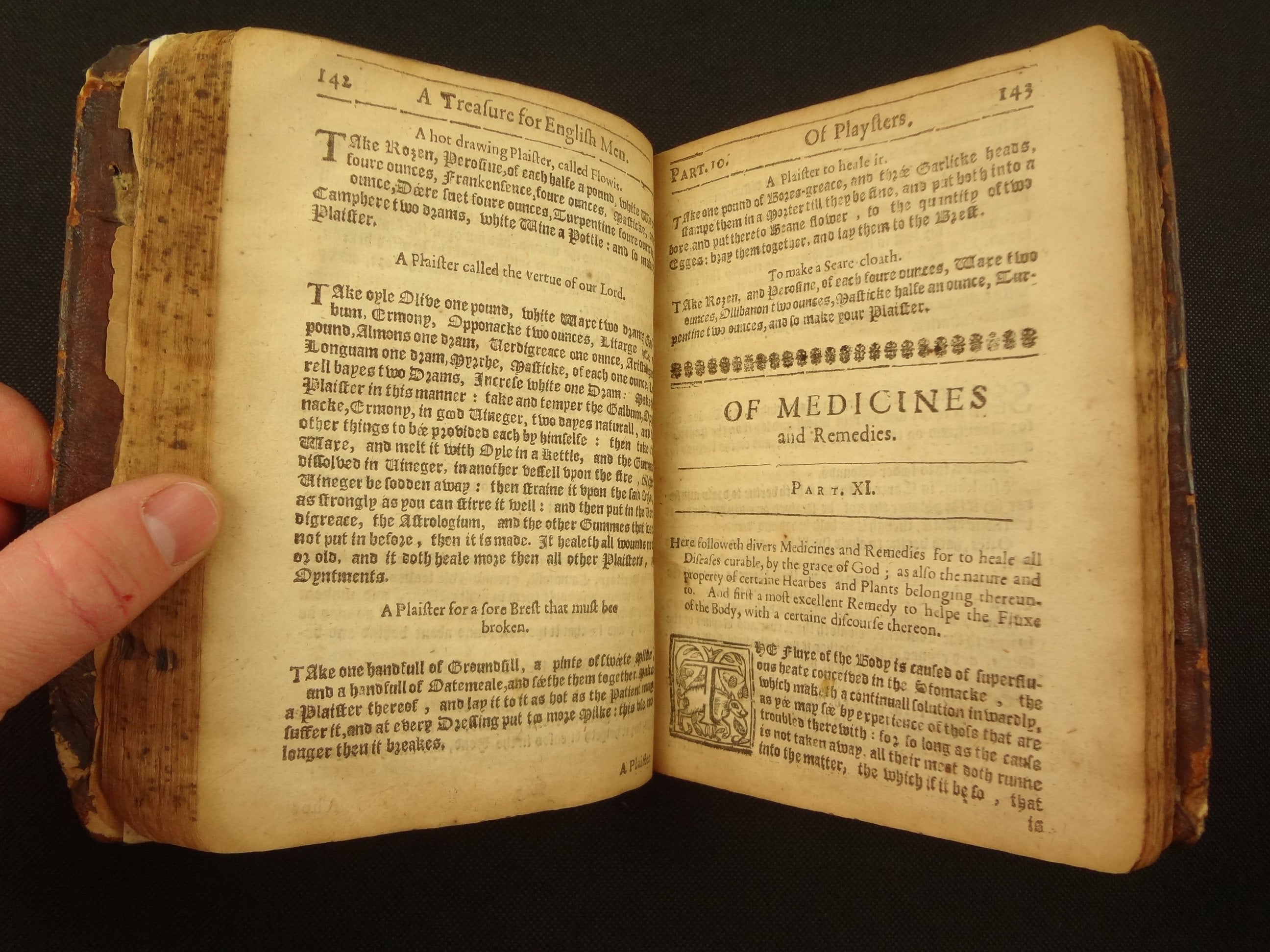 1641 The Englishmans Treasure. With the true Anatomie of Mans Body (Thomas Vicary). Also includes English Bathes, by William Turner, and Waters and Medicines... for Physicke and Chyrurgie:..with especiall and approved Remedies for the Plague... by William Bremer. This edition "augmented, corrected and enlarged" (since the eighth edition, which was 264 pages). And the "annexed secrets" are gathered from the J. Hester work, A short discours... uppon Chirurgie (London, 1580).

An expansive English medical work, with anatomy, physiology (bathing), and medicine ("with almost a thousand approved waters and medicines"), but likely dated by the mid-17th century, as much of the original work was 16th century medicine. This edition is likely the last edition until modern reprints; OCLC records one copy of a 1651 edition, but it seems likely to be a librarian mistake as no other copies are recorded.

Vicary's work was long considered (perhaps) the first English treatise on anatomy, but it was discovered he largely reiterated a medieval work. University of Michigan writes, "Largely based on a medieval English compilation dating from 1392, which was an abridged version of passages from H. de Mondeville and Lanfranco of Milan."

Vicary's work has received praise and contempt, sometimes by the same author.

Sir D'Arcy Power wrote, "had surgical education been carried on as (Vicary) proposed, the standing of English surgeons in society would have been much higher", among other praises (Memorials of the Craft of Surgery in England, 1886, p. 102).

"It is a worthless treatise on anatomy based upon the teaching of Lanfranc and Henri de Mondeville, but it shows that Vicary was looked upon as an anatomist by his contemporaries...", writes Power in The Education of a Surgeon Under Thomas Vicary (British Journal of Surgery, 1921, p. 240)

William Turner contributes to this edition on the value of bathing (1st printed in his Herbal of 1562). And William Bremer expands greatly, with many recipes, cures, etc. (some taken from Hester's translation of Fioravanit, and Ward's translation of Piemont).

This copy has the signs of being well-used, but taken care of; old repairs include a new frontis/title page and a spine.

This ninth edition was expanded nearly thirty pages from the previous edition of 1633.

Ex-libris of Dr. William Sargent, a well-known but controversial psychiatrist who was an out-spoken advocate of methods such as psychosurgery (surgery to the brain for psychiatry reasons), electroconvulsive therapy, and insulin shock therapy.

Flyleaf chipped along fore-edge. Pages browned throughout. Frontis and title-page reproduced with early photo-copies, collated and all else present. Dog-eared pages, foxing, thumbing throughout. 3 cm. stain at 57, ghost of it on 56. 3 cm fore-edge tear 72, no text affected. Pages 100-124, 200 to rear moisture marks (mostly light, occasionally more noticeable). Ink stain on 183. 210-11 were stuck together but now separated with damage. "214/5" written at top of page. Top-edge tears at 241, 249. Last page of "table" bound proud, fore-edge damage, and bottom edge cut tight (no signature).

Despite notes, holding together well and having a sense of antiquity and true use. The thought occurred that some thumbs might be of blood (conjecture/imagination).